“India has two million gods, and worships them all.  In religion all other countries are paupers, India is the only millionaire.” (Mark Twain)

Nowhere is this more true than in Tamil Nadu.

Tiruchirappalli (Trichy) is famous for its Rock Fort Temple and the Sri Ranganathaswamy Temple.

The Rock Fort Temple is really a series of temples, cut into a huge rocky outcrop over 80 metres high which dominates the landscape. From a bustling market area filled first with stalls selling everyday items and, closer in, votive offering and temple ware, you follow a lane and then climb over 400 rock cut steps, up through a series of temples literally cut into the rock. The final temple is dedicated to Ganesh and is surrounded by a balcony with 360 degree views of the city and surrounds.

Sri Ranganathaswamy Temple is billed as ‘possibly’ the largest temple in India, with 49 seperate shrines and a 73 metre temple tower. 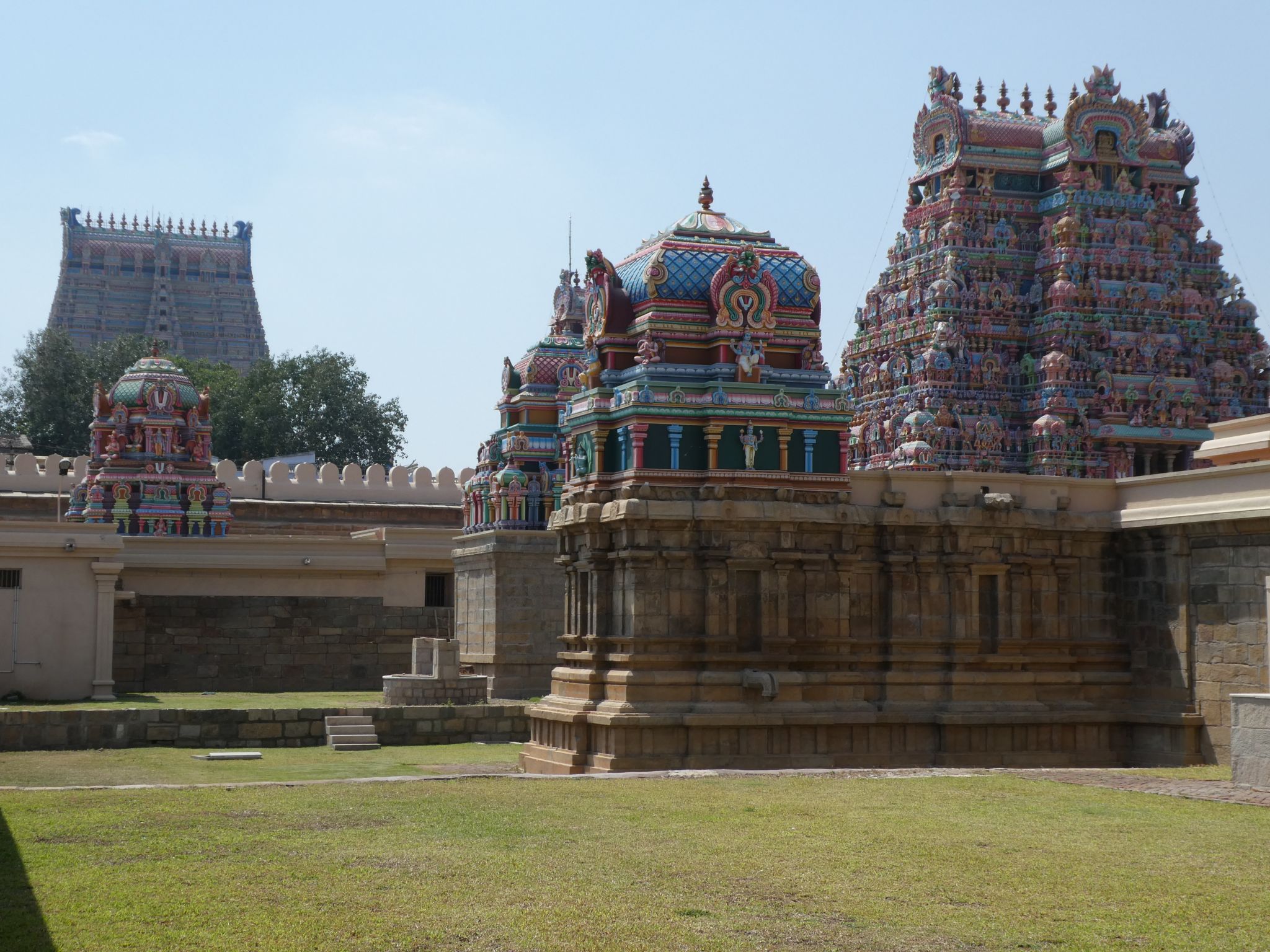 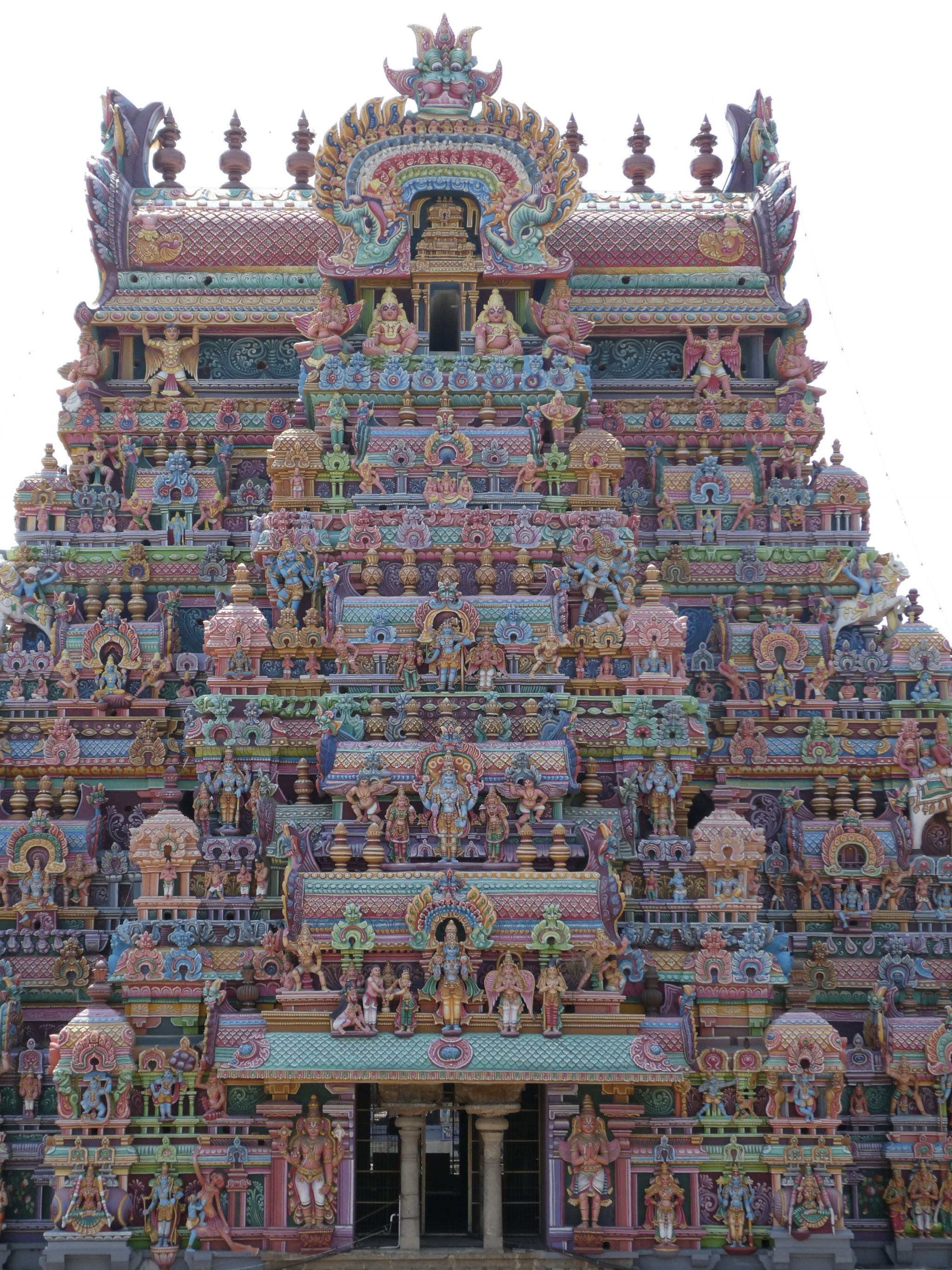 It’s crammed with devotees and watching them is far more interesting than the complex itself.  Some of the  shrines do not admit non-Hindus and we were shoo-ed away from those.  How did they know….

From Trichy we caught a train to Madurai.  Our experience of Indian trains is that at anything at 2A class or better, trains are clean, efficient and perfectly adequate.  Buying tickets is an entirely different matter.  The Indian Railways website is completely impenetrable and seems to require an Indian mobile phone number.  Distance trains book out, so it’s prudent to buy tickets at least the day before, and the only sensible way to do this is to attend a station to buy tickets.   At Trichy, the apparently simple exercise of buying two tickets for the next day’s train to Madurai took several hours, firstly due to the beaurocracy and secondly because queue-ing was non-existent.  A scrum of people at the booking counter, each pushing their form under the nose of the booking clerk with no regard to who might have been waiting longest.  It feels rude to do the same, but if you don’t adopt the local mores, you will never get served.  Shameful to say, there are some benefits to being much taller than the average South Indian.

Madurai is a working town, but at heart it’s a temple town.  The magnificent Meenakshi Amman Temple complex, constructed in the 17th century, honours Meenakshi, who according to legend was born with three breasts and a prophecy that when she met her intended husband, the first breast would melt away, which it did when she met Shiva.

The temple is actually a 6 hectare complex with 12 temple towers (gopuram) ornately decorated with gods, demons and other creatures. 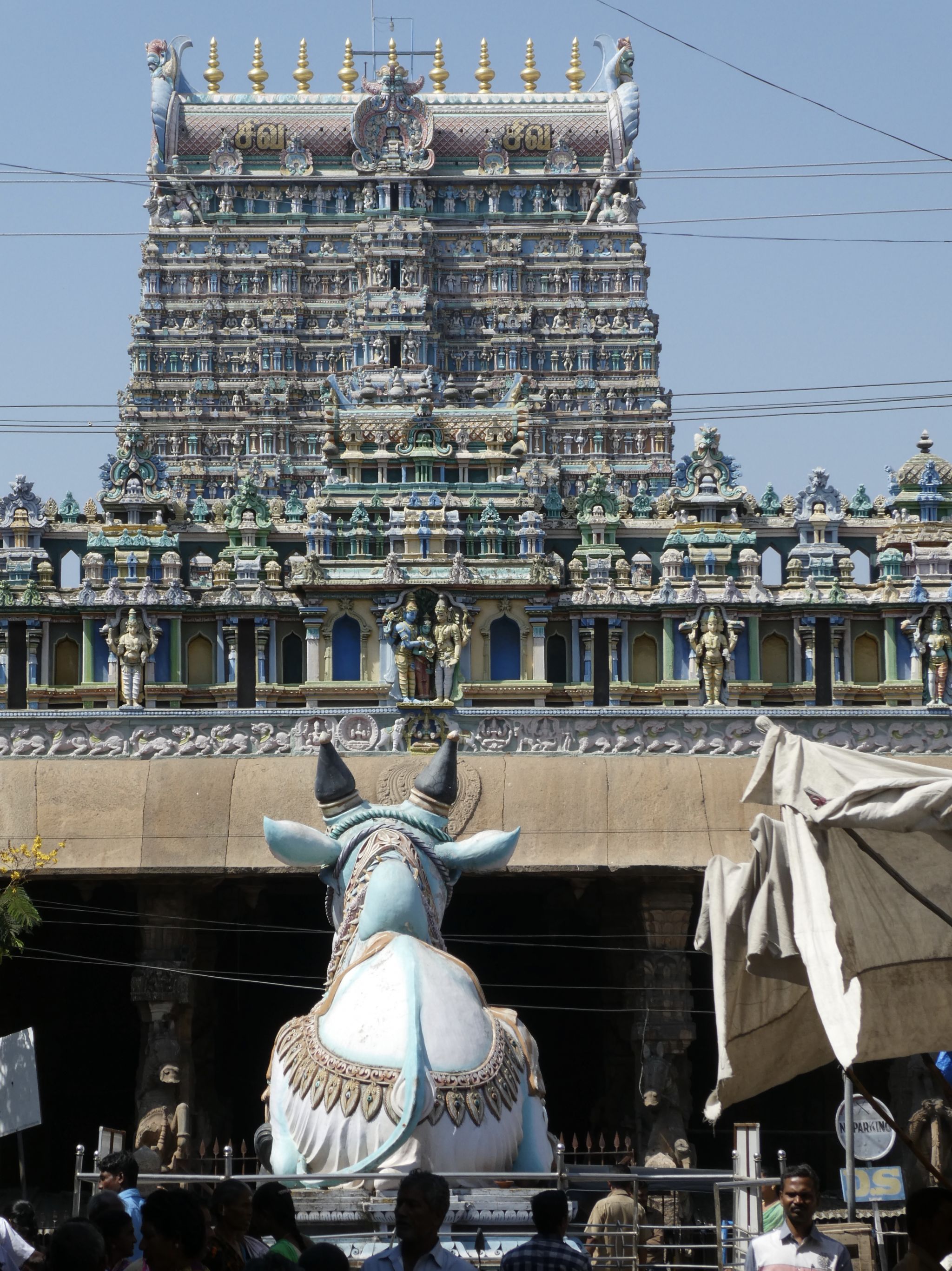 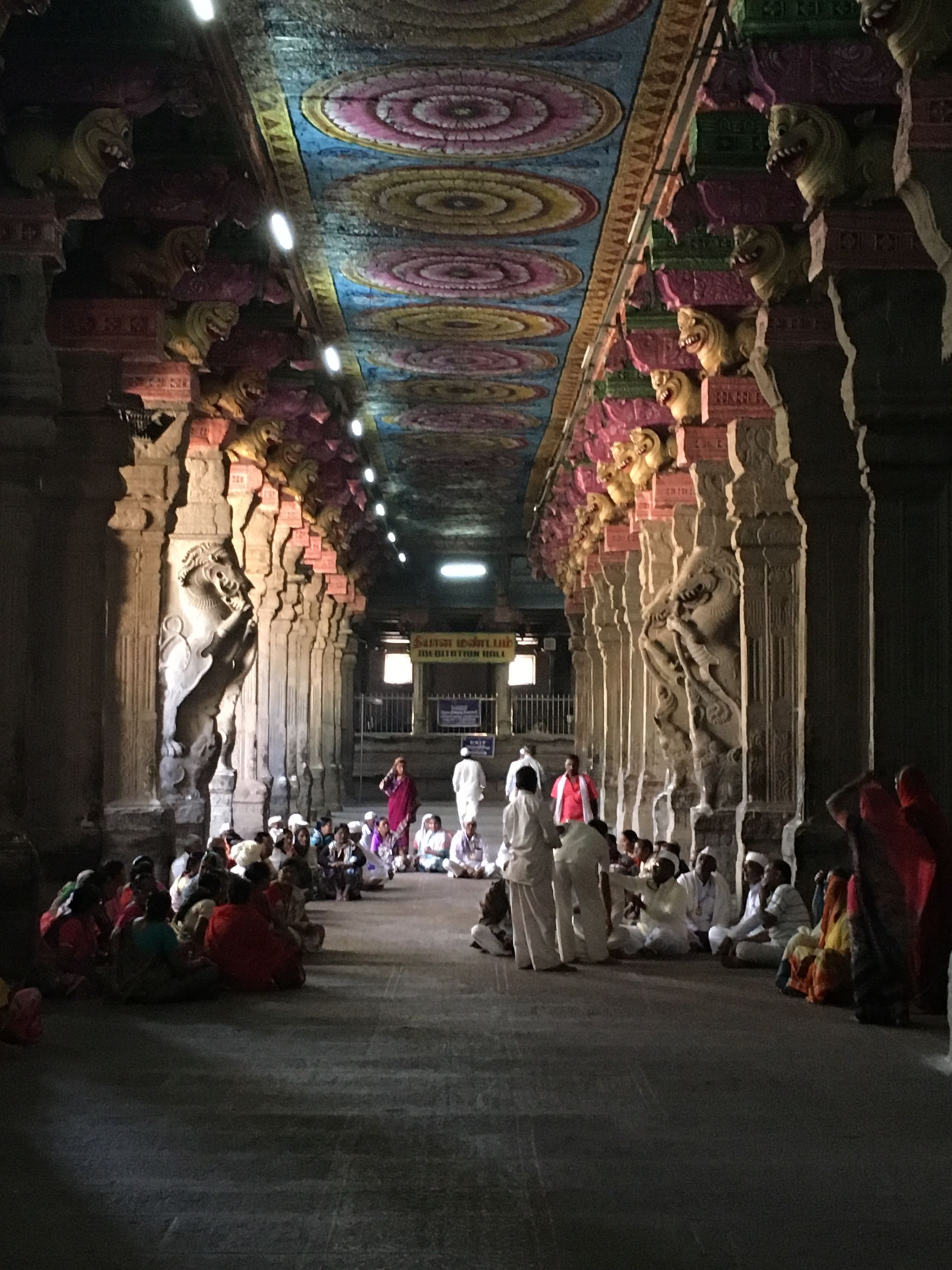 Non-Hindus can visit most areas, but visitors must have covered shoulders (no singlet tops) and legs (trousers or a long skirt).  Many of the shrines have ornate rock cut features or decorations, and the complex seems constantly full of pilgrims.

From Madurai we also hired a car and driver to visit Pandam Island, a small island linked to the mainland by a bridge, several hours drive south of Madurai.  Although it’s not the most southern point in India, it was once the southernmost boundary of ‘sacred India’.

The island lies only 30kms from Sri Lanka, which is visible on a clear day, and the two countries are almost linked by a series of shallow reefs in between (Adam’s Bridge).

According to legend, the demon Ravana kidnapped Sita, the wife of Lord Rama, holding her captive in Sri Lanka.  Lord Rama brought an army of bears and monkeys, who built the reefs, crossed to Sri Lanka and rescued Sita.   Back on the beach at Rameswaram, Sita formed a lingam of sand and they gave thanks to Shiva.  Now thousands of pilgrims flock here every day to the Ramanathaswamy Temple built on that spot, where they joyfully have great buckets of holy sea water thrown over them.   Sadly, no photos allowed.

At the far end of Rameswaram lies derelict, desolate Dhanushkodi. Once a working port, Dhanushkodi was obliterated in a cyclone in 1964 and never rebuilt. The remaining structures – ruins of a church, school, railway station and some houses – are gradually being worn away by the weather and those closest the beach are being gradually reclaimed by sand. 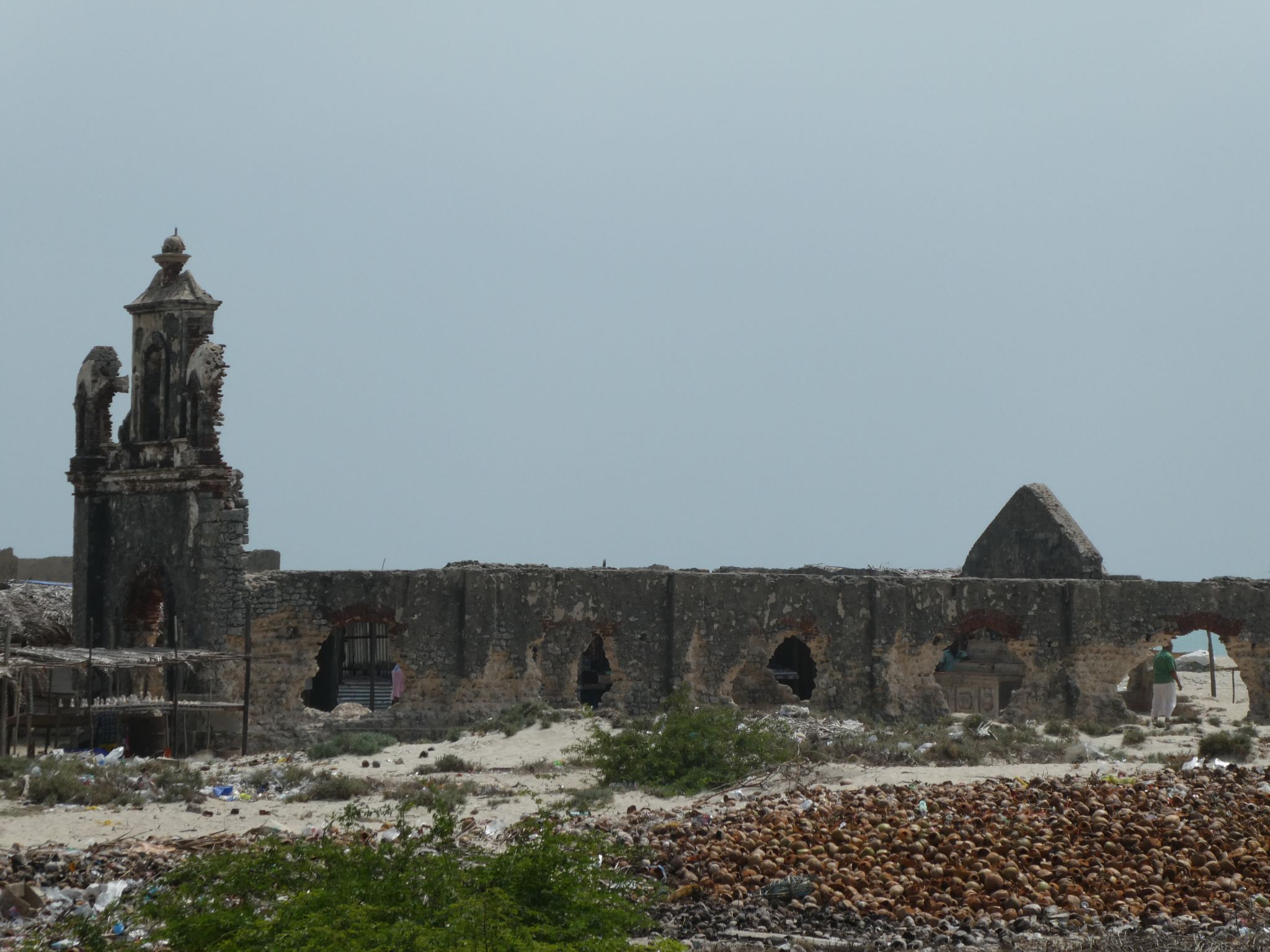 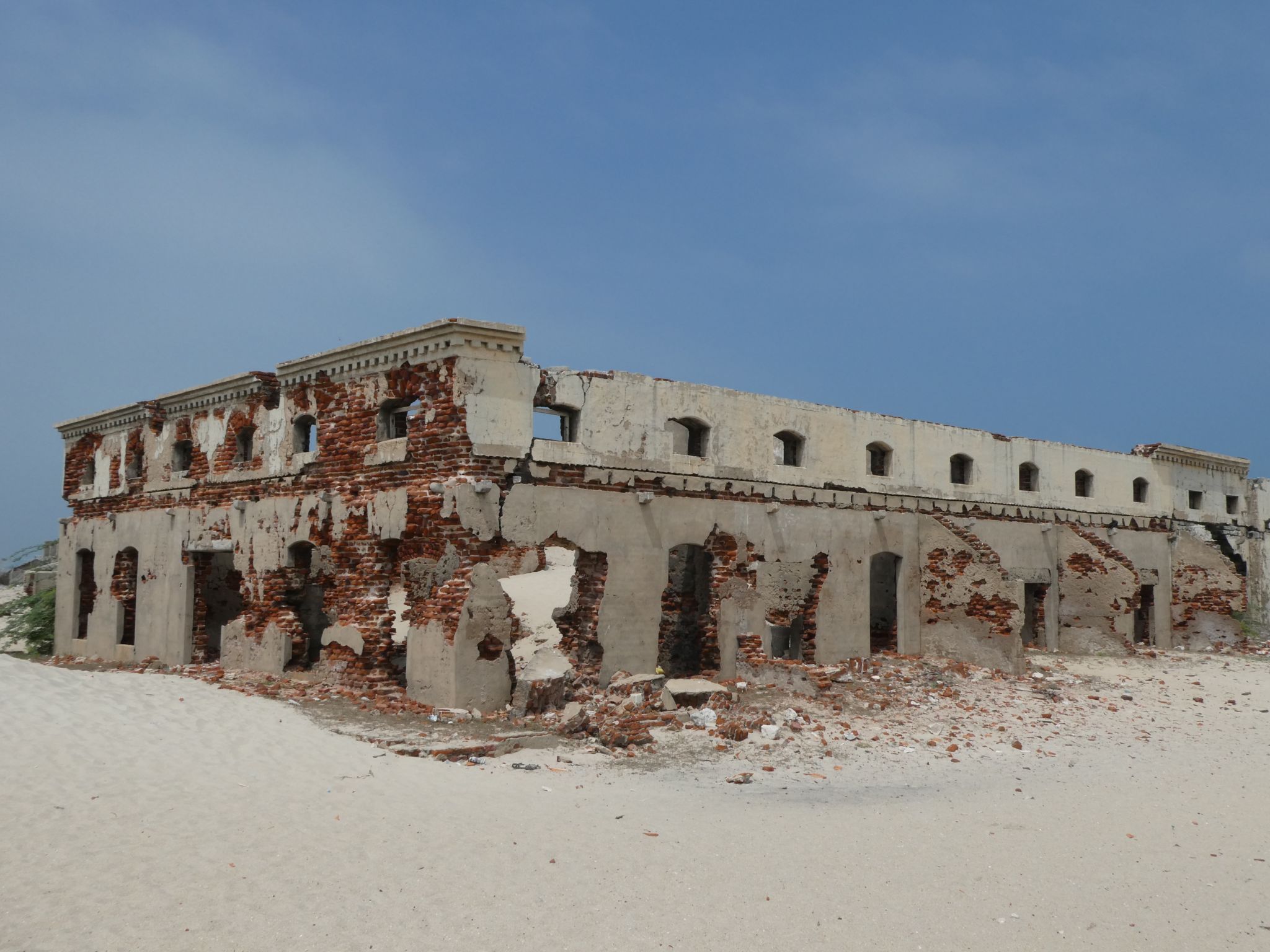 Once this was quite remote, requiring a long drive up the beach in a four wheel drive at low tide, but in 2017 a road was completed all the way to, and through, the old town.  This is a great shame, as it has completely lost its sense of remoteness.  The road is a jarring eyesore dividing the old buildings, and the easier access has meant an influx of trinket sellers who have even established fences which oblige you to run the gauntlet of the souvenir stalls in order to reach some of the buildings and the beach.  Sadly, we think this is no longer worth the trip.