Having had our fill of Hindu temples, we headed from Madurai to Karaikudi, a short and painless couple of hours on a bus.  Don’t believe the fellows spruiking day trips and city tours, who will tell you there is no bus to Karaikudi but they can organise you a private car!

Karaikudi is at the centre of the area known as Chettinadu.  The Chettiars originally lived on the coast but when their area was consumed in a high sea, they sought higher ground.  In what might be considered an extreme response, they moved to this arid plain far from the coast.

The Chettiars are a distinct ethnic group, with a very different culture to the rest of South India.  They settled something like 75 to 95 (depending on what you read) towns and villages in what became known as Chettinadu.  They were traders and amassed significant wealth in the late 1800s from a trading empire which stretched to Burma (as it then was), Sri Lanka, Singapore and trade with Europe.  With their wealth, they built large, opulently appointed mansions with Italian marble floors, teak pillars and doors from wood sourced in Burma, ornate ceramic tiles from Europe etc.

Much of their success was from banking and they essentially pioneered banking services in this part of the world.  However with the downturn in the world economy following WW1, their wealth base declined, and when banking was nationalised in India, crashed altogether.  Families left en masse, literally locking and walking away from these beautiful mansions which were far too expensive to maintain.

With a very few exceptions, the mansions sat gently deteriorating until the heritage value of the collective was recognised and the area was placed on the UNESCO World Heritage tentative list in 2014.   A number of the mansions have been meticulously restored and now operate as hotels.  Others are in the process of refurbishment, and some of the appeal lies in the fact that there are still many lying untouched.  Towns like Kannadukathan are still quiet, dusty towns with ample of the original mansions to imagine what it must have been like at its peak, but not (yet) tricked up Disneyland reconstructions for tourists.

We stayed at the beautiful Bangala Heritage Hotel in Karaikudi, a carefully restored heritage bungalow, with large, cool, high ceiled heritage styled rooms opening to a wide verandah, facing a central courtyard with an open sided pavilion where meals are served.

From there we took a driver and guide to various villages in the area to see some of the heritage houses.  They ranged from the meticulously restored: 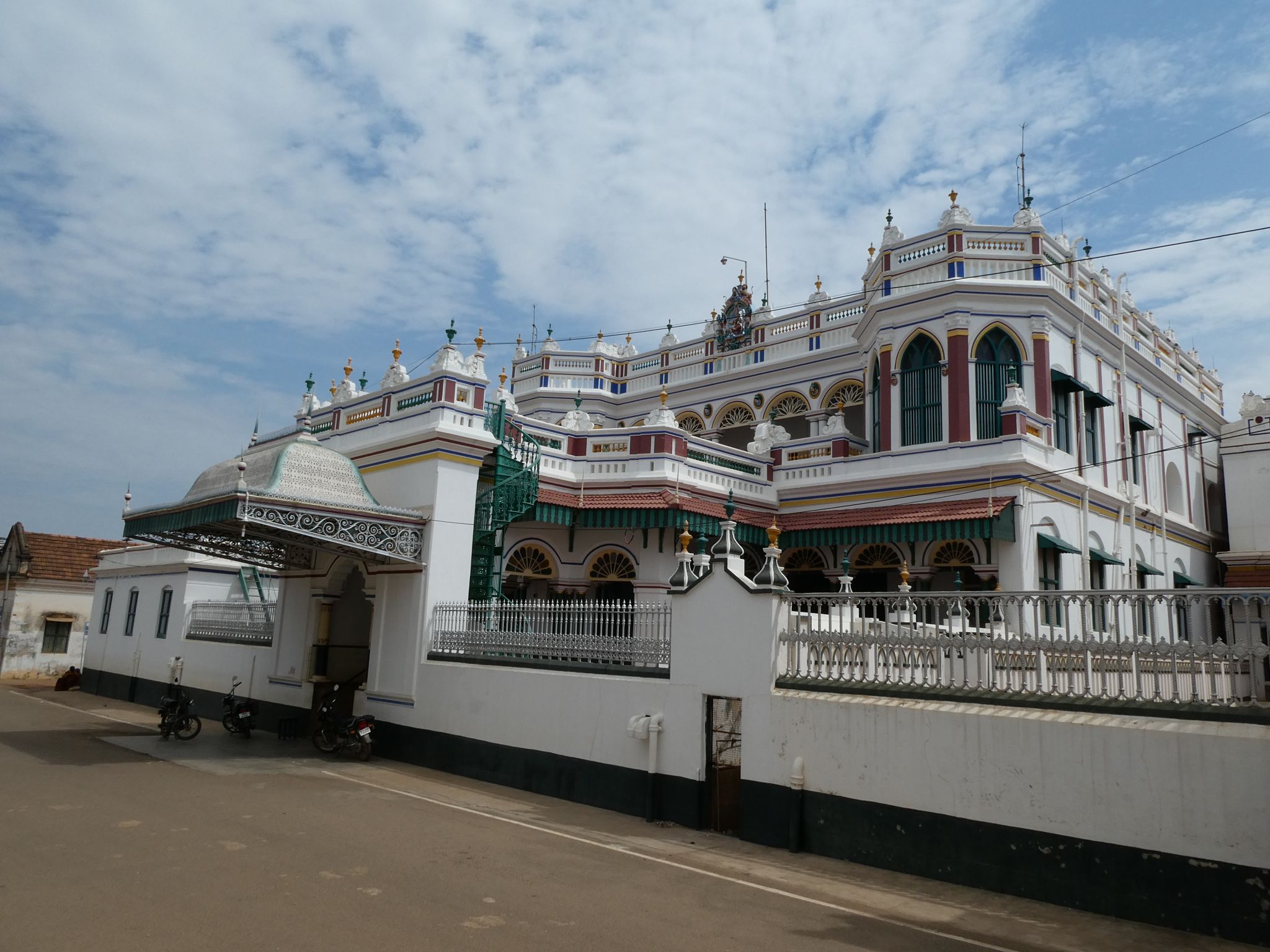 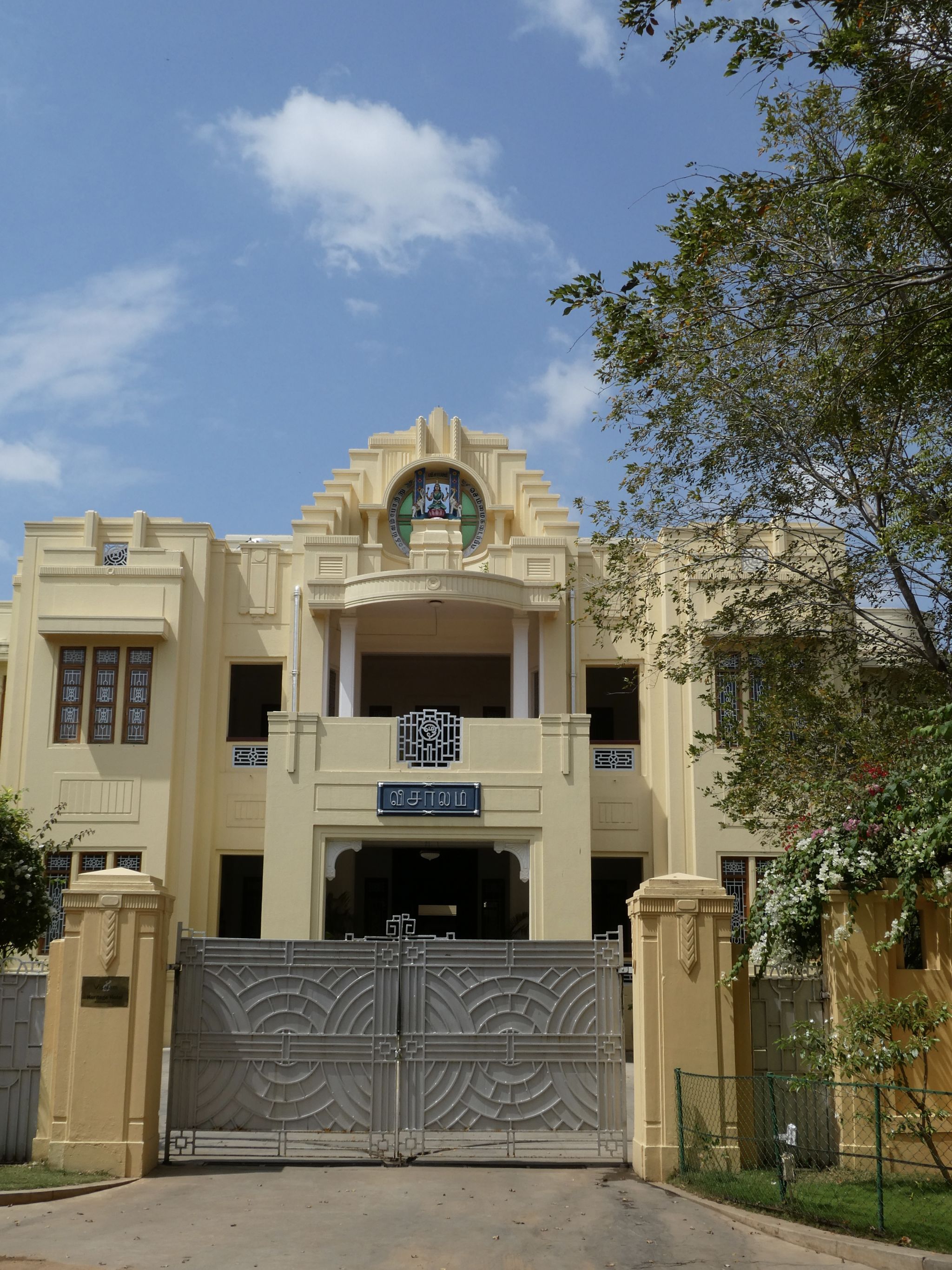 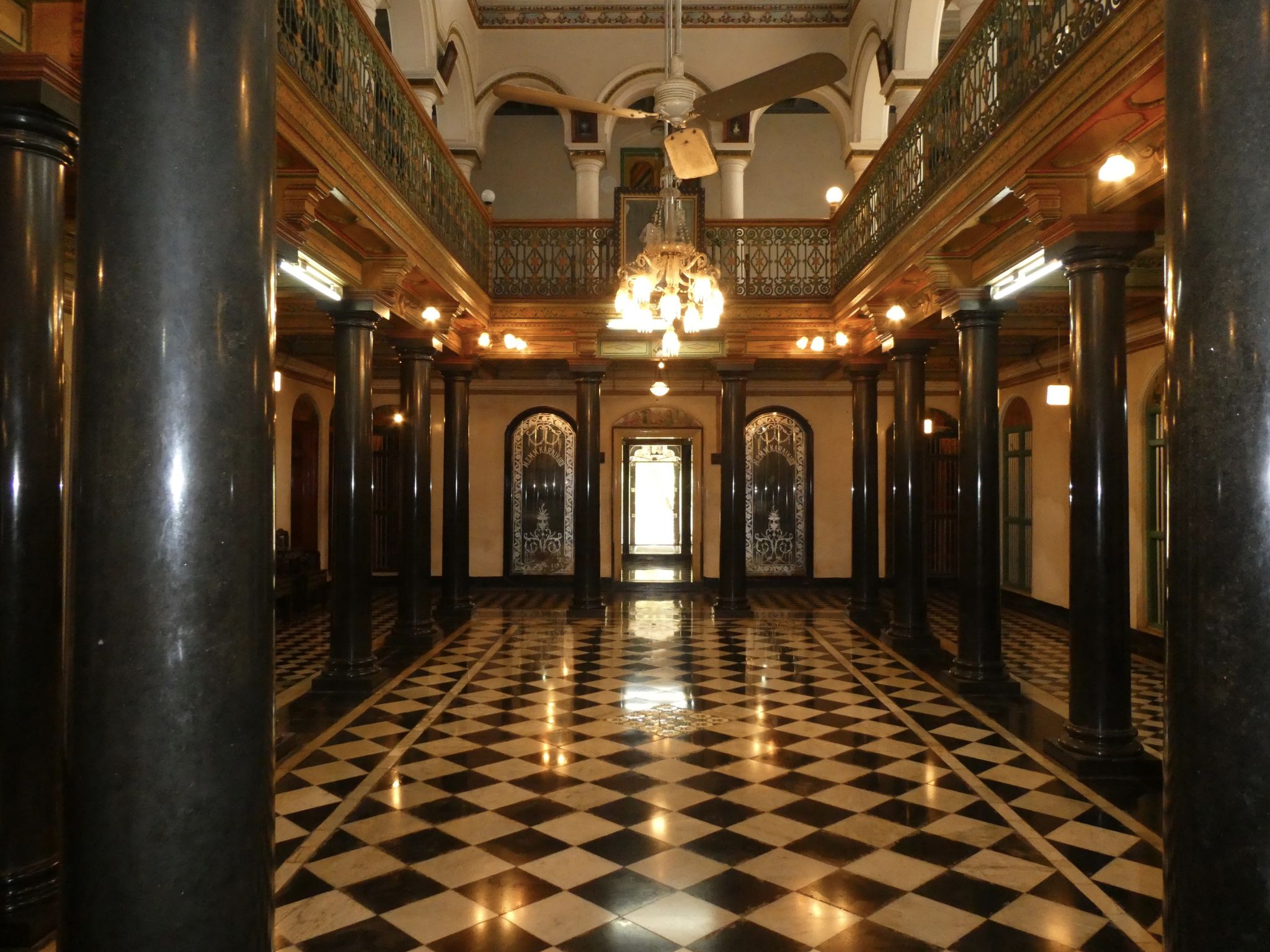 to the completely unrestored: 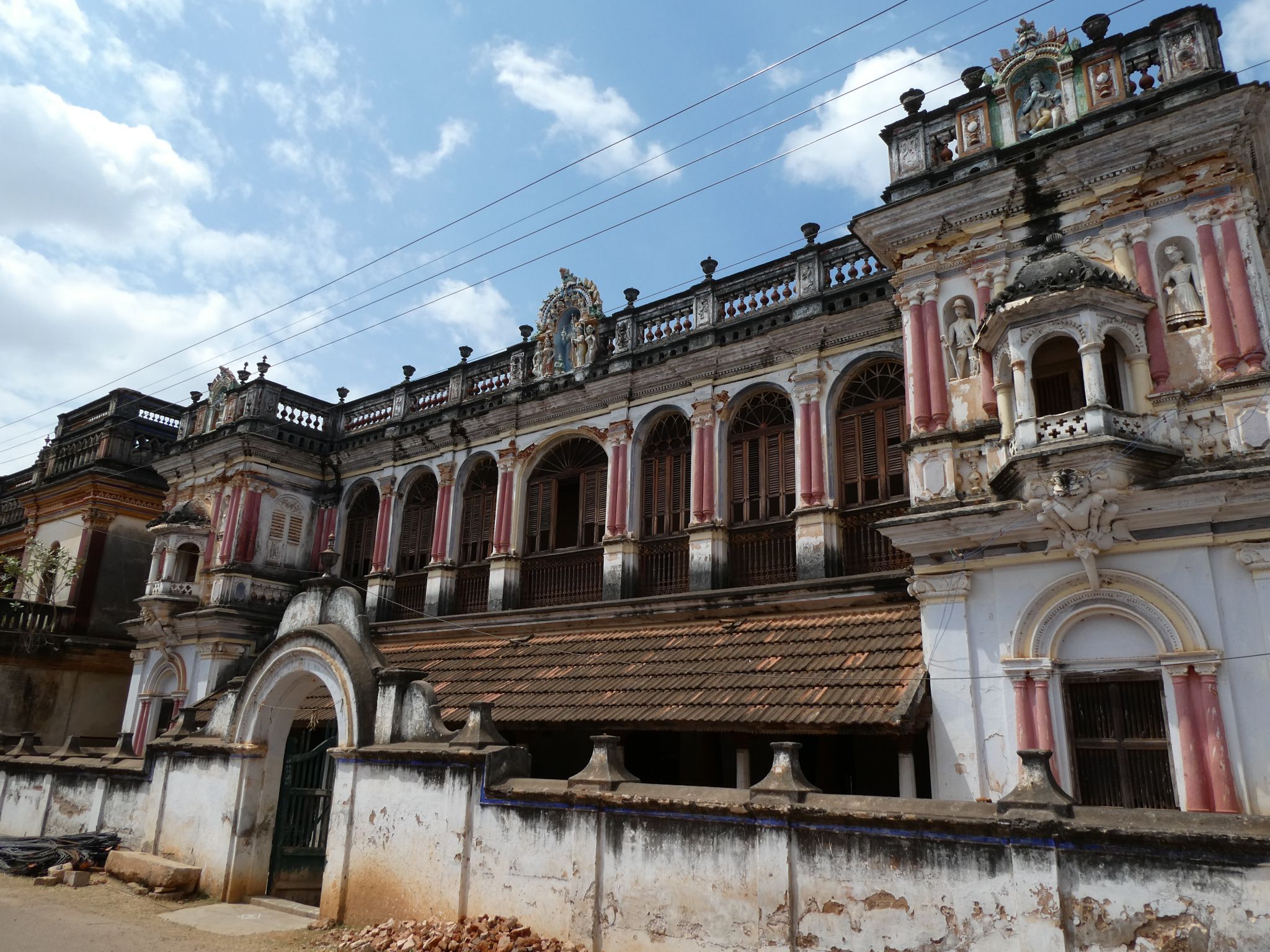 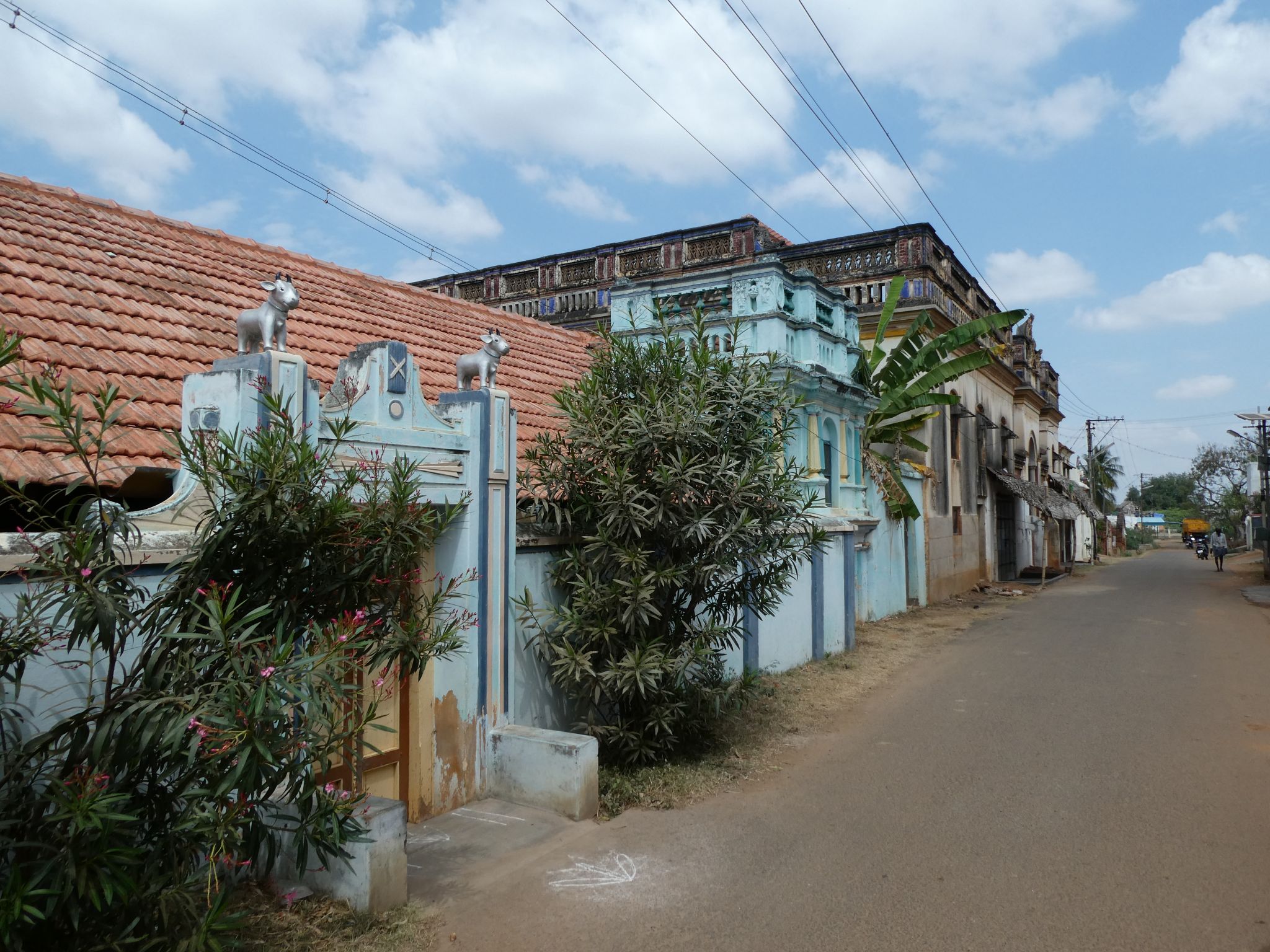 We visited the Ayyanar shrine at Ellangadaputi, which is hidden in a forest area remote from any local villages.

Horses line both sides of the path leading to the shrine. The paint fades quickly in the outdoors, but the horses are interesting and beautiful. 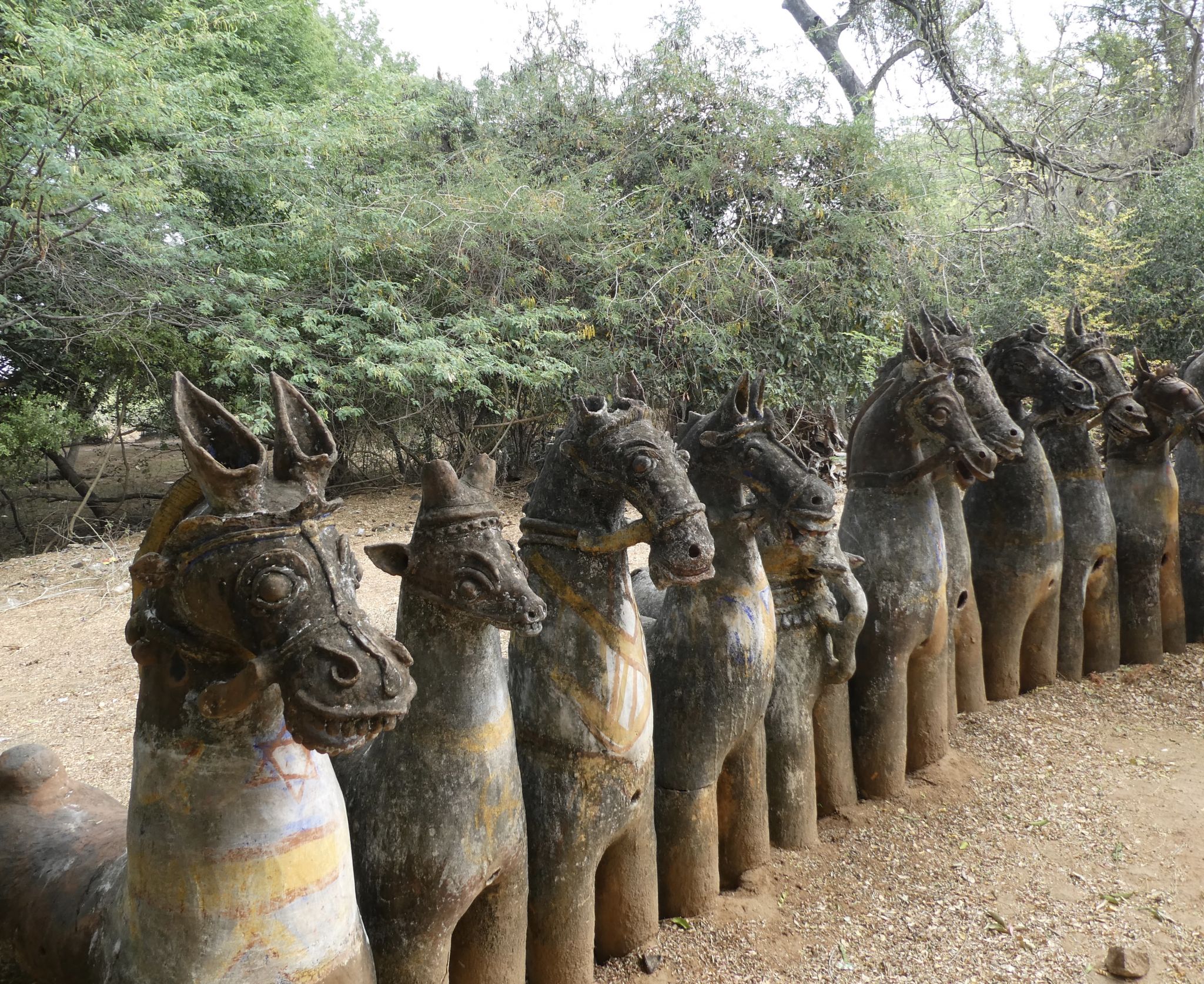 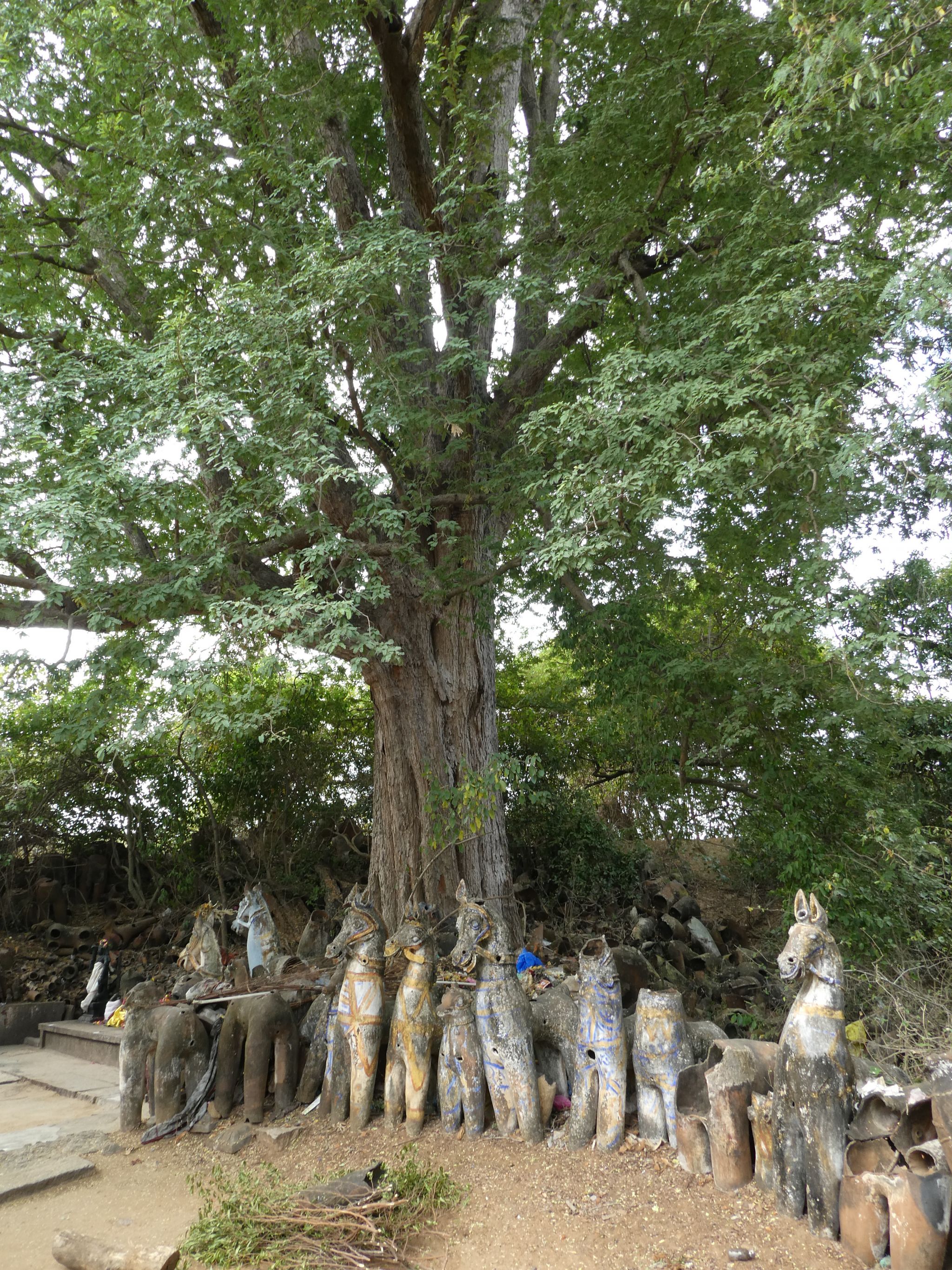 Some of the older ones are missing their heads, as monkeys come and leap all over them causing damage. 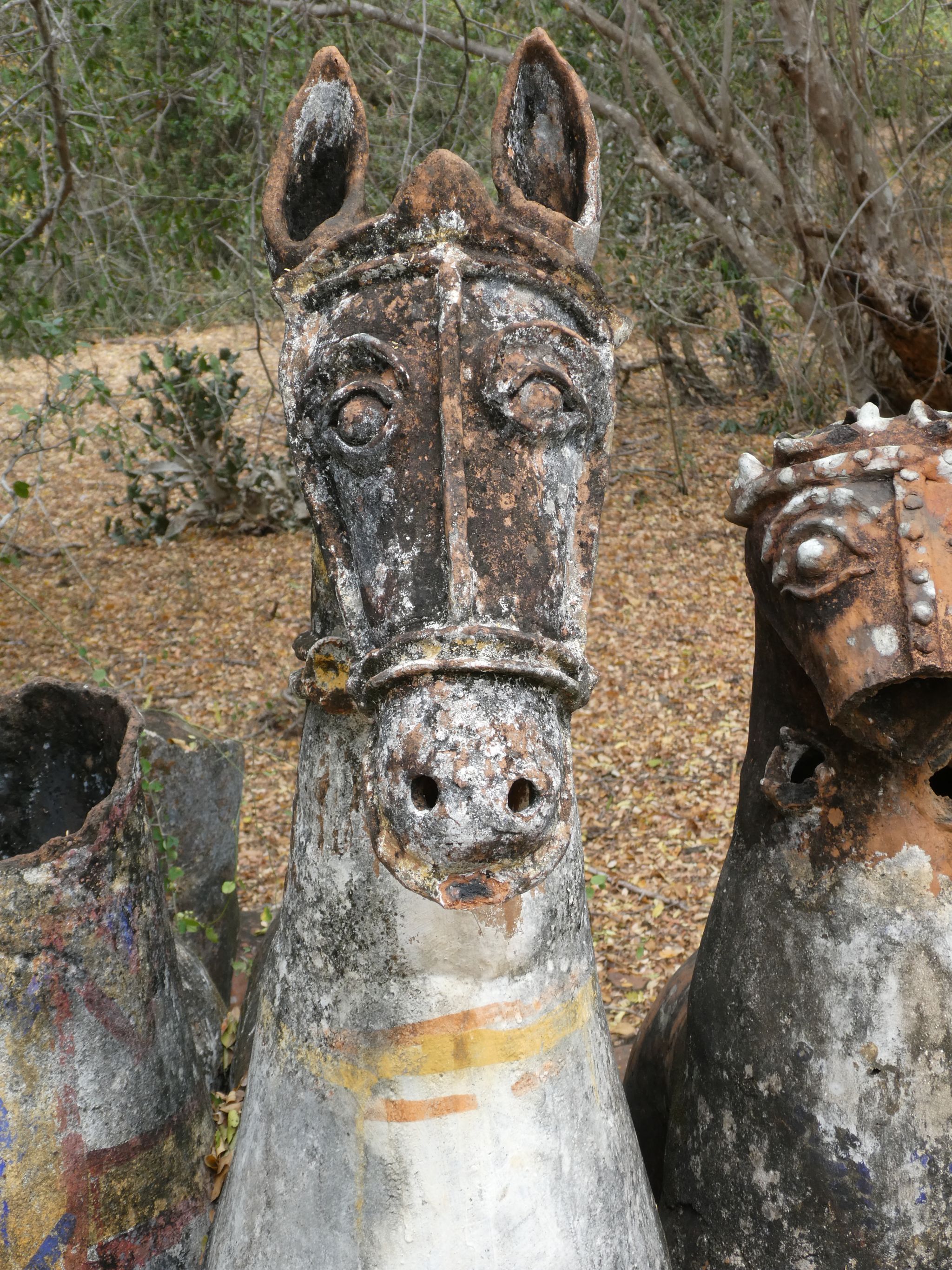 When the hoped-for baby is born, the couple return and leave a votive offering of a terracotta child or of an animal other than a horse. 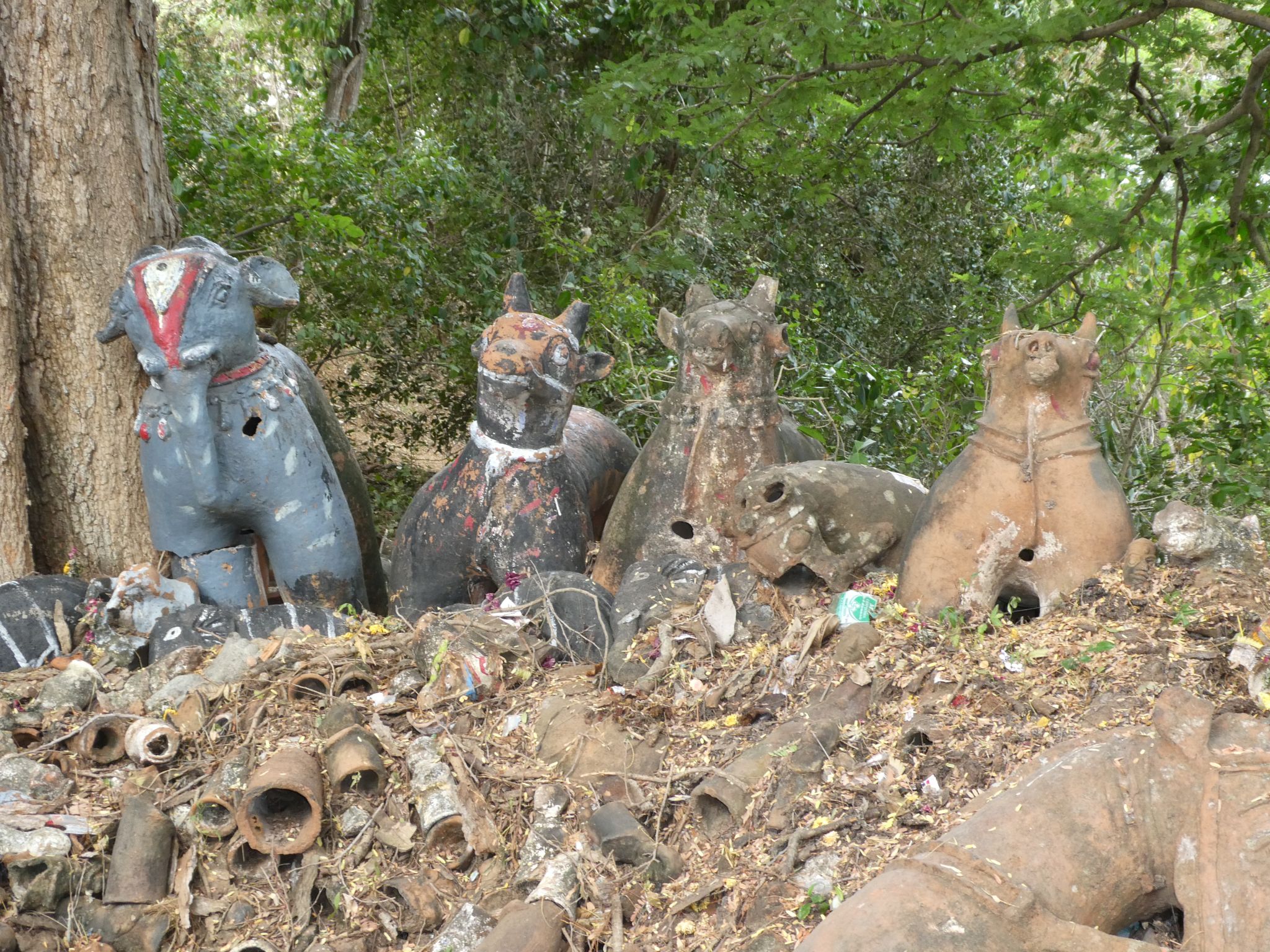 The shrine is cared for by a couple of temple attendants. 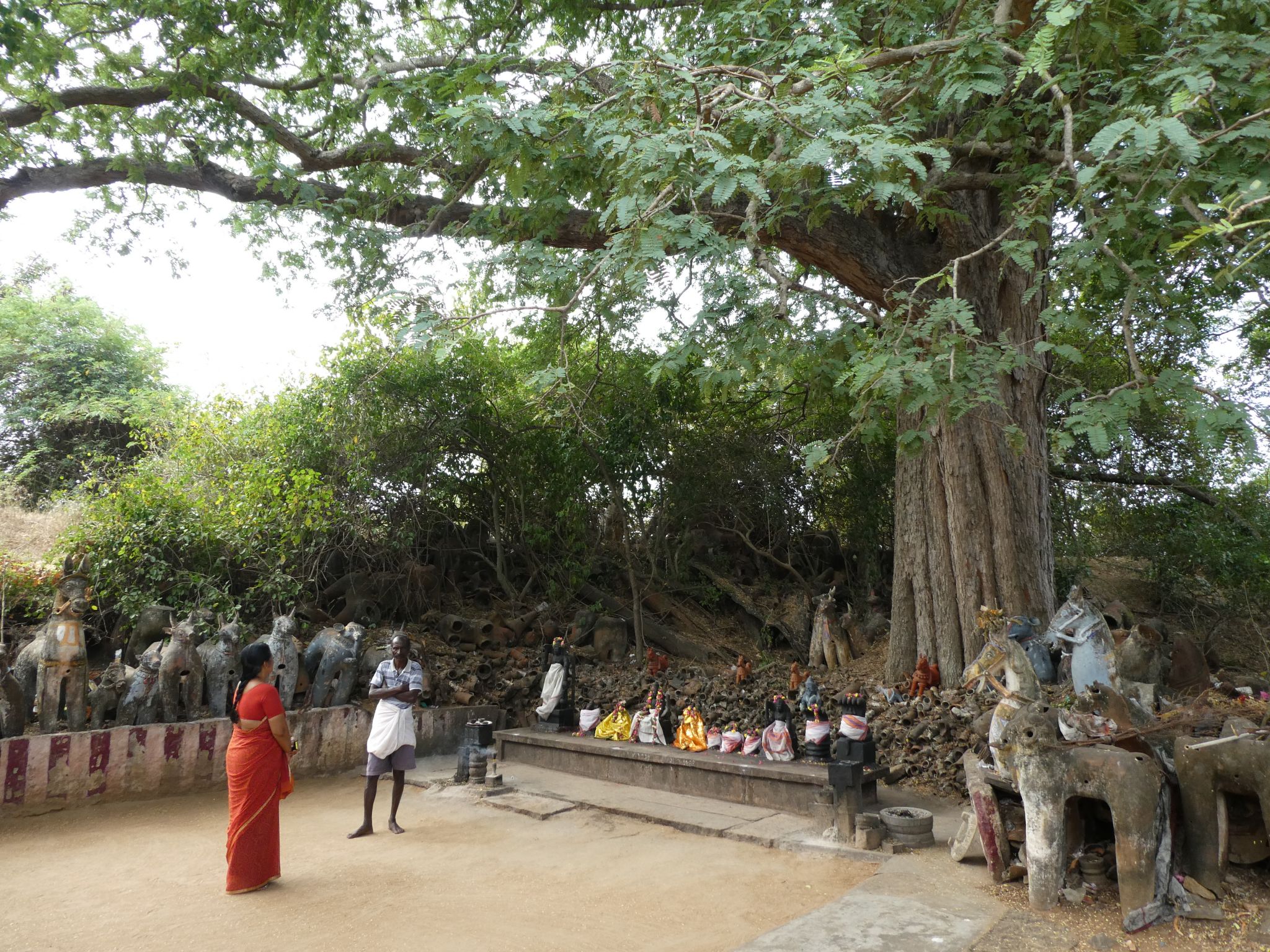 The area is quiet and serene, and you get the feeling nothing has changed here in hundreds of years.  There are fancier, better preserved horses in other places, but we liked the unique environment and total authencity of this place.