After our few days R&R by the sea at Mamallapuram, we headed to Chennai and onto a flight to Kolkata.  Kolkata is a huge, frenetic city of 18 million, and it seems like everyone is on the street, either in a car, on a bike or on foot, all of the time.

It also has a fantastic street food culture.  There is no reason to eat in a restaurant here.  Every pavement and lane way is full of food carts and stalls selling tasty morsels of deep fried deliciousness.  We found particularly fertile grazing grounds in the lanes around Sudder Street (where we were staying), along the pavement wrapping around the Chowringhee Road corner near the Indian Museum, the sidewalk outside the Railway booking office in Fairlie Place, and along Strand Road South heading toward the Mullick Ghat flower market.

Food ranges from bite sized snacks such as panipuri and pakoras, to more substantial snacks such as bhel puri, to cooking on an almost industrial scale. 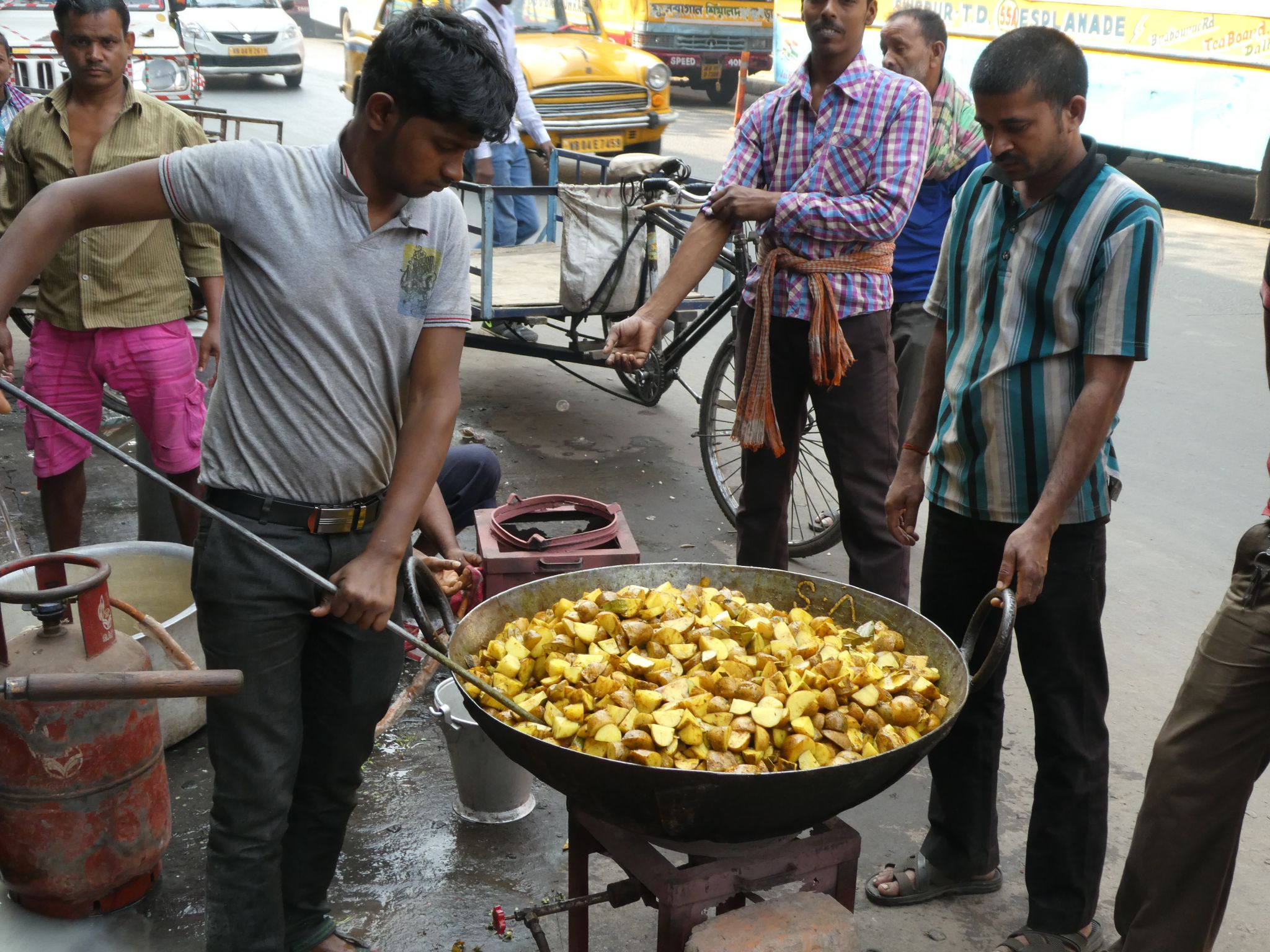 Our first priority was to secure tickets for the night train to New Jaipalguri, the connection point for Darjeerling.  In an all too familiar scenario, this involved arriving at the booking office thirty minutes before opening, placing our name on a list, waiting for the office to open, and then waiting, waiting, waiting.  At least here, they have a numbering system and you won’t be gazzumped by a rogue hand reaching from behind you and sliding a request to the booking clerk on top of yours.  Even so, it took over 2 hours to reach us (number 19 on the list!).

We then hit a few tourist spots.

At St John’s Church there is a memorial to those who died in the Black Hole of Calcutta. 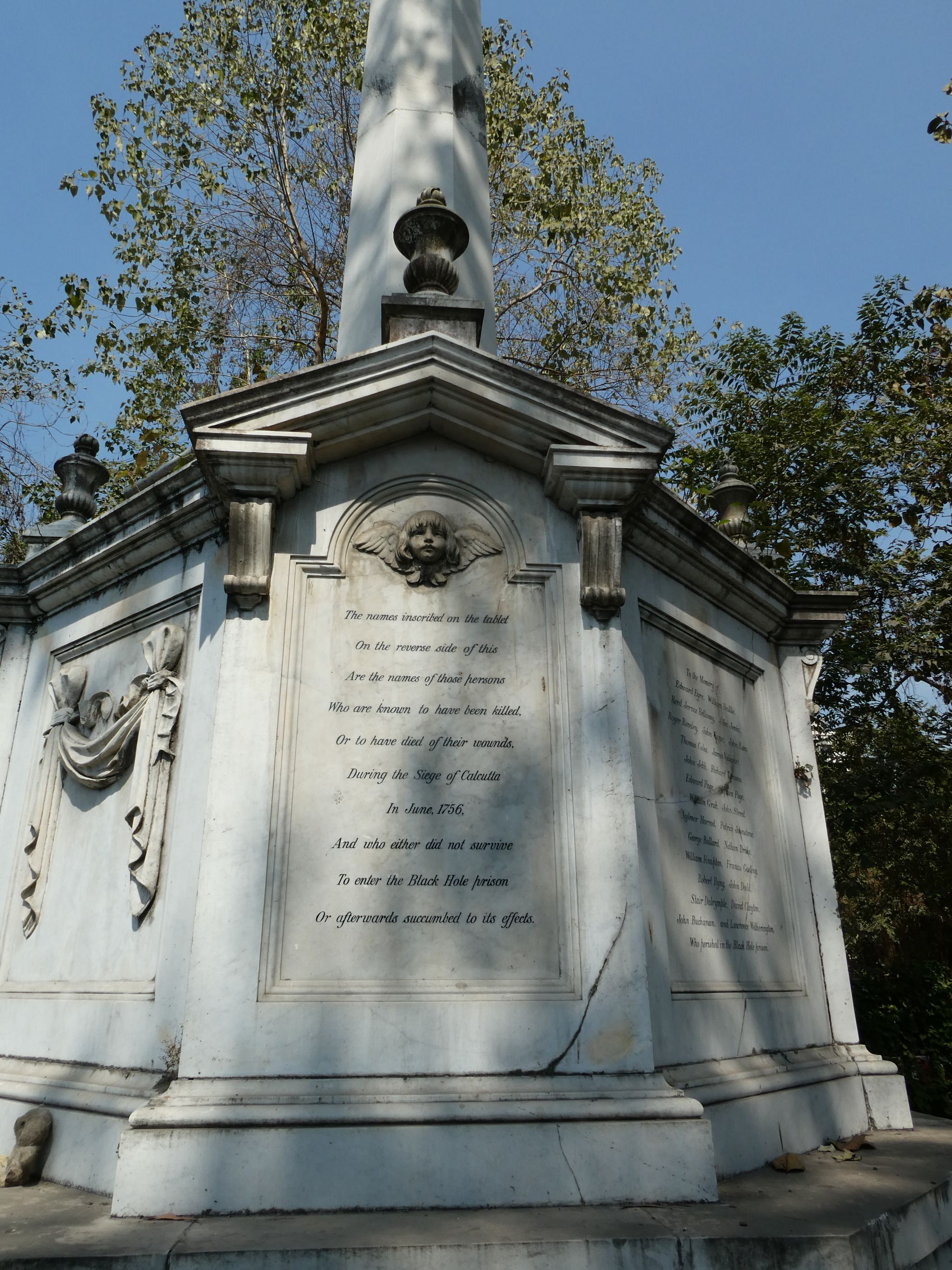 The mausoleum of Job Charnock, the British founder of Calcutta is in the grounds, as well as tombs and memorials to less famous people, some with pretty interesting stories, such as this lady who, well, let’s just say having three husbands die before she was fifty makes husband number four seem rather a brave man.  Also, if you do the math, her age at the time of first marriage is fairly scary. 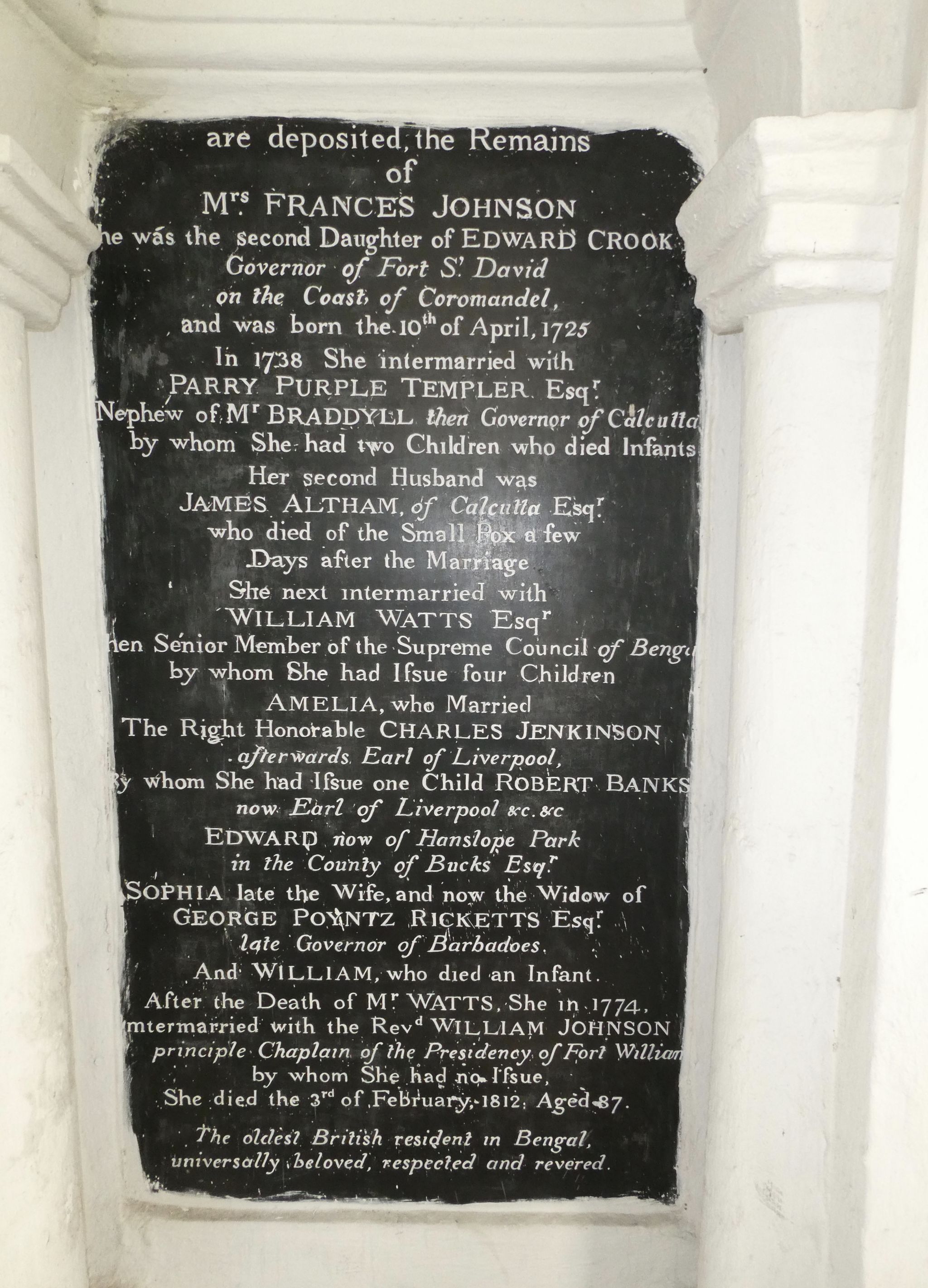 We walked through the Maiden and watched players from the local cricket clubs playing cricket. They played every bit as seriously as a test team (and we didn’t see any sticky tape in the bowlers’ hands…)

The city has some grand, and many grandly decaying, Raj era architecture on account of having once been the British capital in India, as well as the Victoria  Memorial which was built to commemorate the death of Queen Victoria in 1901, although it wasn’t finished until 1920.  It houses an overly detailed exhibition of the history of Kolkata, and the road to Indian independence more broadly, which is way too much to absorb in a session, but the building is impressive and well preserved. 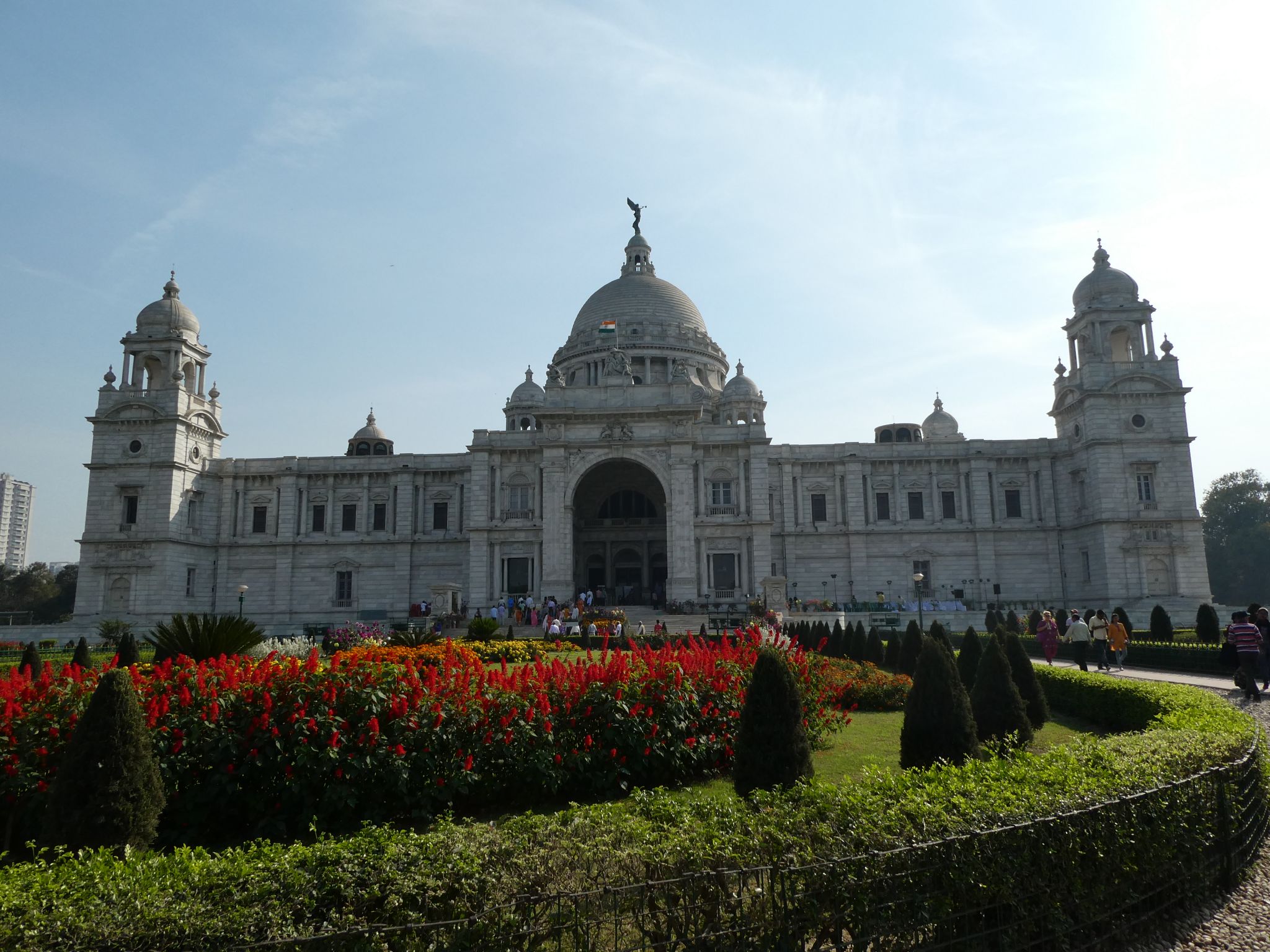 There are still some perhaps inadvertent references to the British era. 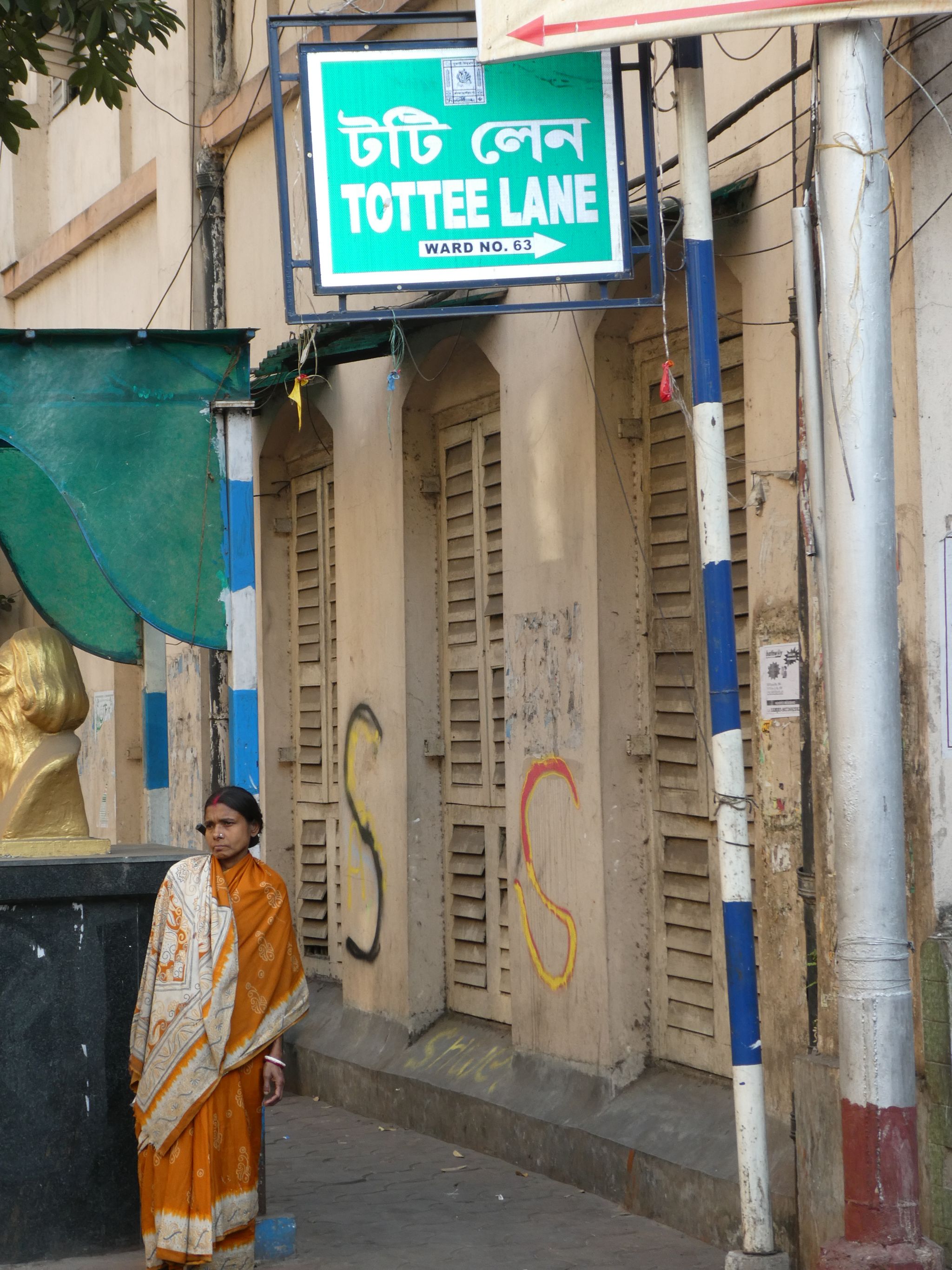 The most interesting and visually appealing thing we saw was the Mullik Ghat Flower Market.  Every day, tonnes of fresh flowers are sold here by wholesalers to retailers and to makers of votive garlands.  The market is crowded, frenzied, slippery underfoot with mud and scraps of flowers, but a visual feast. 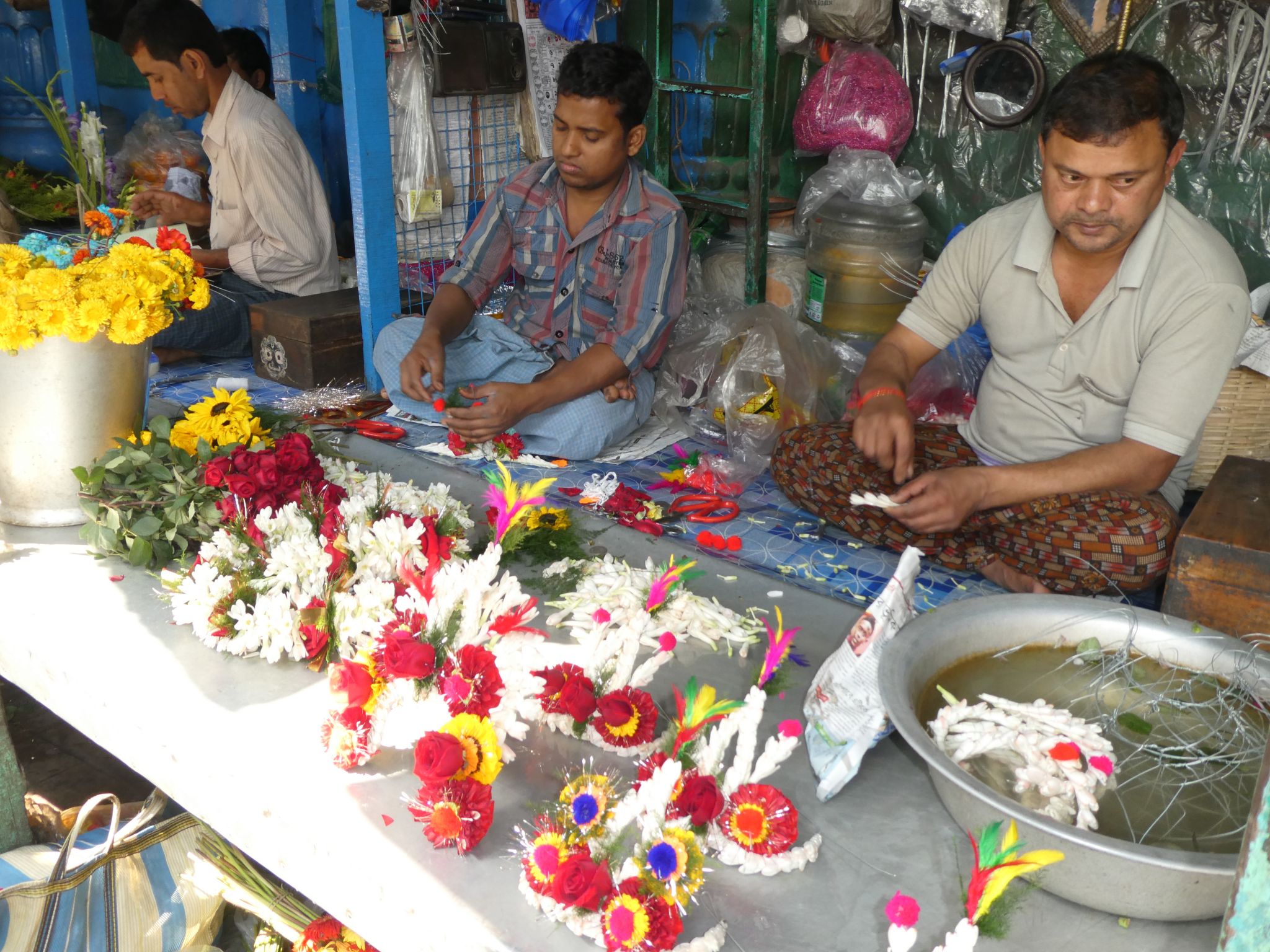 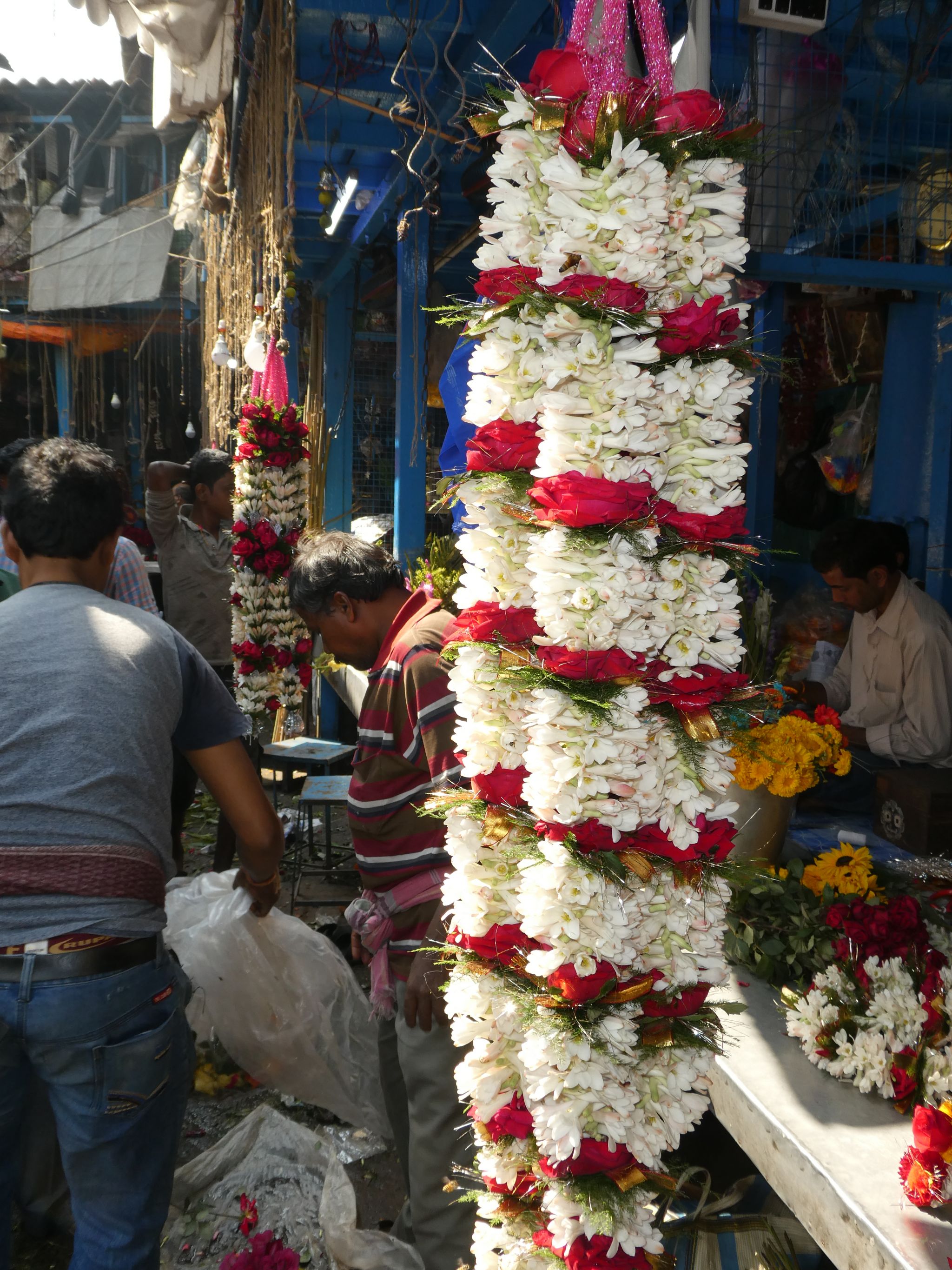 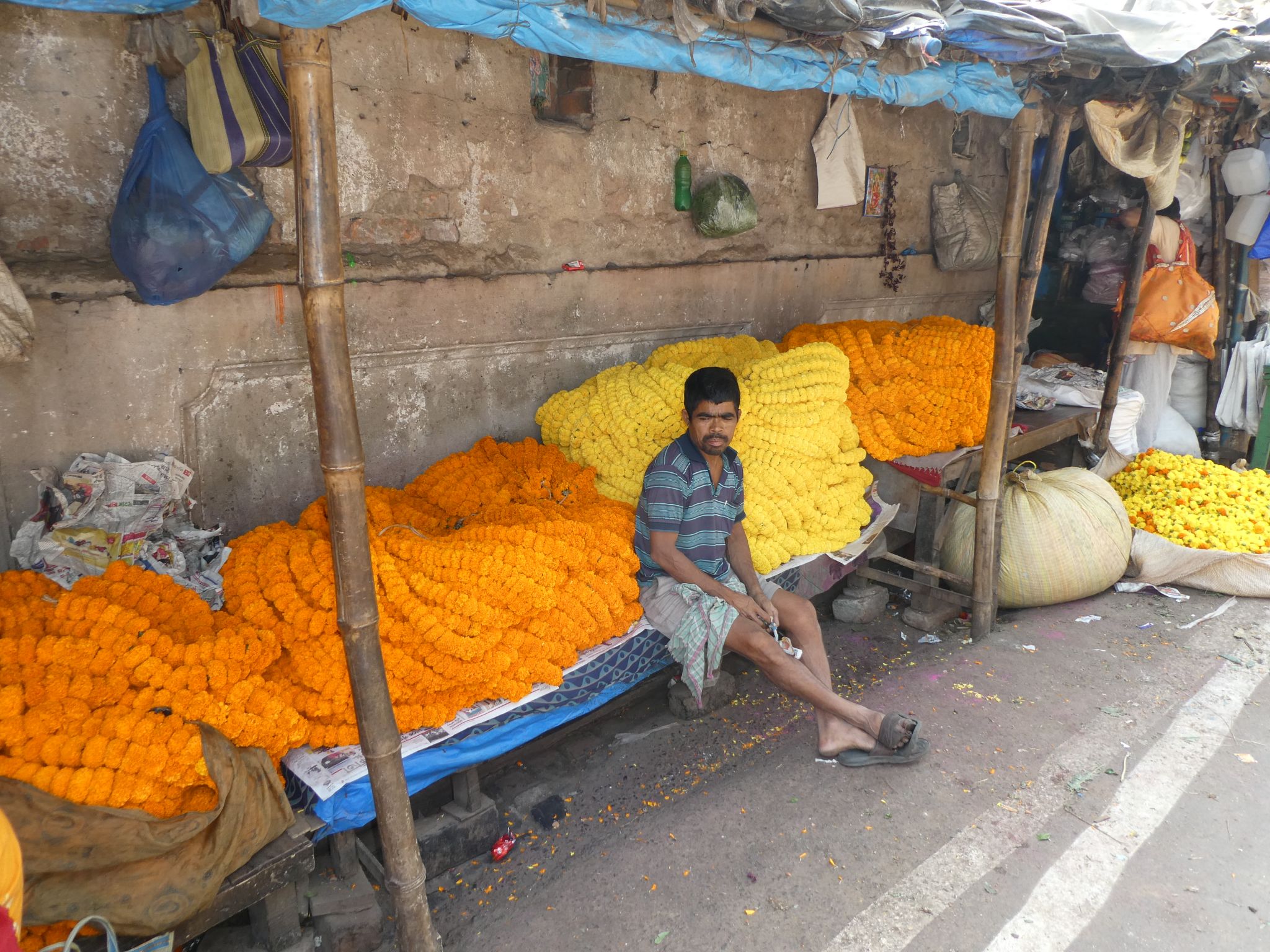 St Mother Teresa’s Motherhouse is open to the public and contains a museum dedicated to her life and the ever-expanding industry which is the Missionaries of Charity she founded.  Her bedroom is preserved as it was when she slept here, and she is buried in a mausoleum in the compound, where devotees come to sit, pray and contemplate. 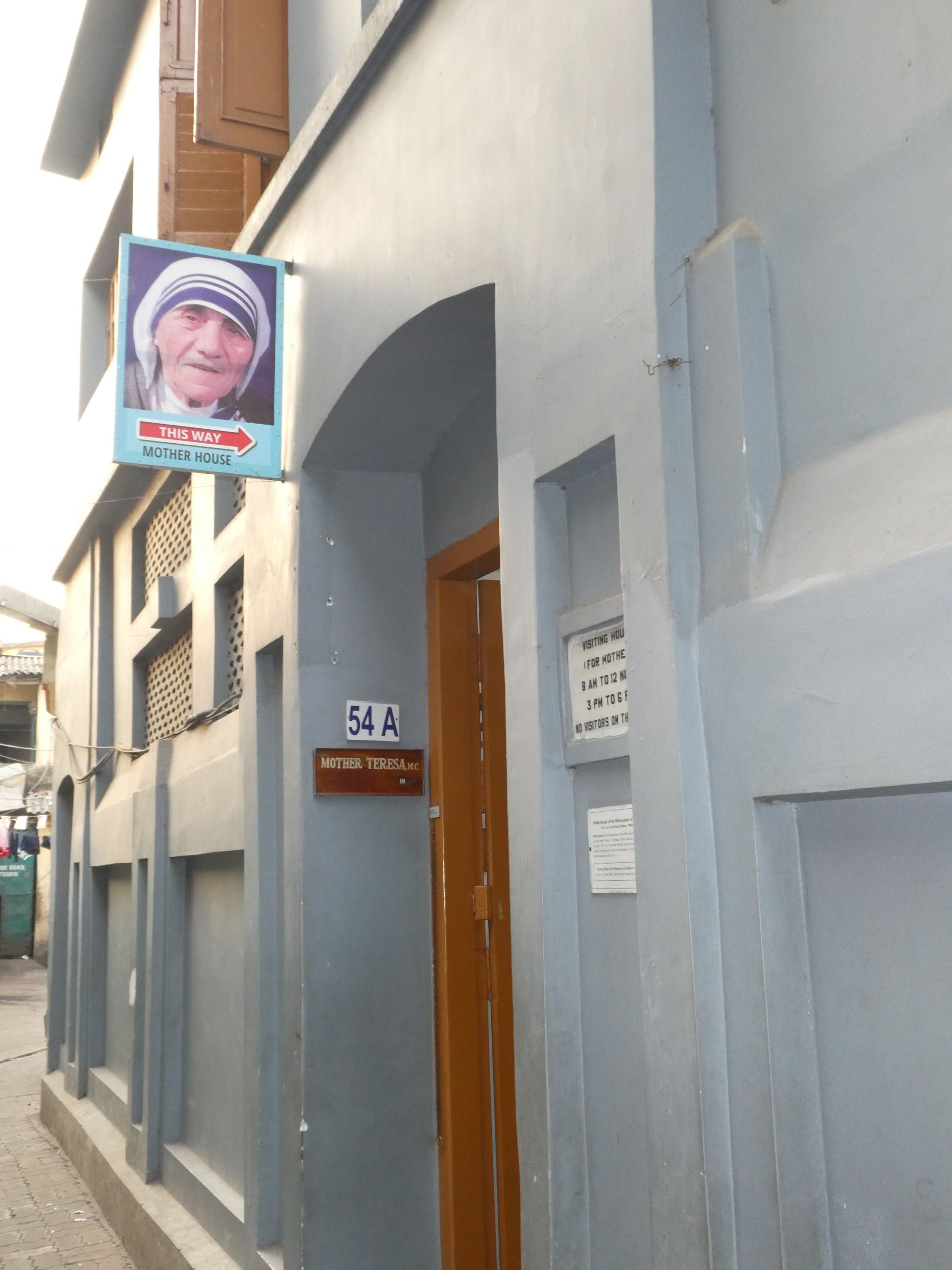 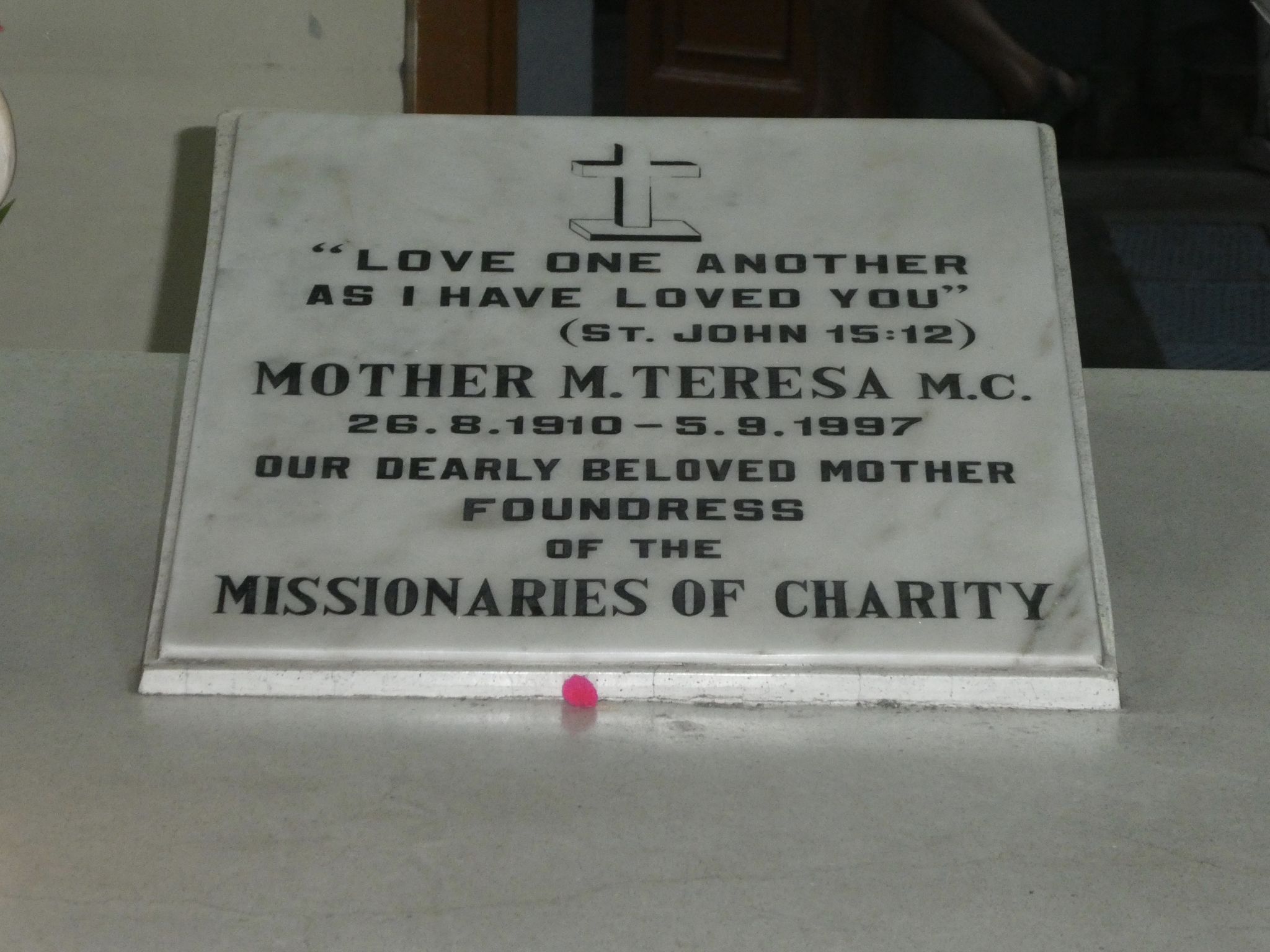