From Bundi we caught a sleeper bus back to Delhi.  The term ‘sleeper’ should not be assumed to mean it is possible to sleep on the bus.  It isn’t.  Our sleeper compartment for two people was a capsule approximately twice the width of a coffin and about the height of one.   The bus had zero suspension and the road was incredibly potholed.  Driving at speed, this meant we were constantly thrown upward, frequently hitting the roof of our coffin.  The bus was ‘non-AC’ but somehow was freezing cold despite our best efforts at stuffing tissues into the vents.  It was a really uncomfortable night.

We then spent a frustrating but ultimately fruitful day in Delhi as we were able finally to collect our visas for Uzbekistan.  Still no movement on the visas for Turkmenistan.

After a night in Delhi we caught the train to Chandigarh.  India’s only truly planned city, it was built from scratch following Partition.  Partition split the State of Punjab, and its former capital, Lahore, fell on the Pakistan side of the line, leaving Punjab without a capital.

A Swiss architect, Le Corbusier was commissioned by the government to design a new capital.  It is a classic example of what happens when a city is artificially created instead of growing organically – it is sterile, feels soulless and the architecture is utterly uninspiring.  That is, unless you love 1950s concrete megastructures.

The reason for our visit was to see Nek Chand’s Rock Garden.

Nek Chand was a roads inspector with the local council who, in his spare time secretly cleared a small area in the local forest outside town and started making little sculptures out of rock and abandoned materials left after the demolition of villages to build Chandigarh,  mostly broken crockery pieces, plastic pipe fittings, broken bits of glass etc.

He worked on his sculptures in secret for 17 years, gradually clearing more and more forest to accommodate them.  Apparently he managed to keep this a secret the whole time.  It was finally discovered by the local authority in 1975 and, as a completely illegal construction, was slated for demolition.  However, the story or the concept must have captured the collective imagination because, following public pressure, not only was the project preserved but Nek was given a salary and staff to continue the work.

He died in 2015 at the grand age of 92, and was quite an international celebrity by then.  The garden is a phenomenal 25 acres in size and contains thousands of sculptures plus more ambitious structures to complement them, including waterfalls and an amphitheatre.

The sculptures are simple yet intricate and absolutely a highlight of our India ramble. 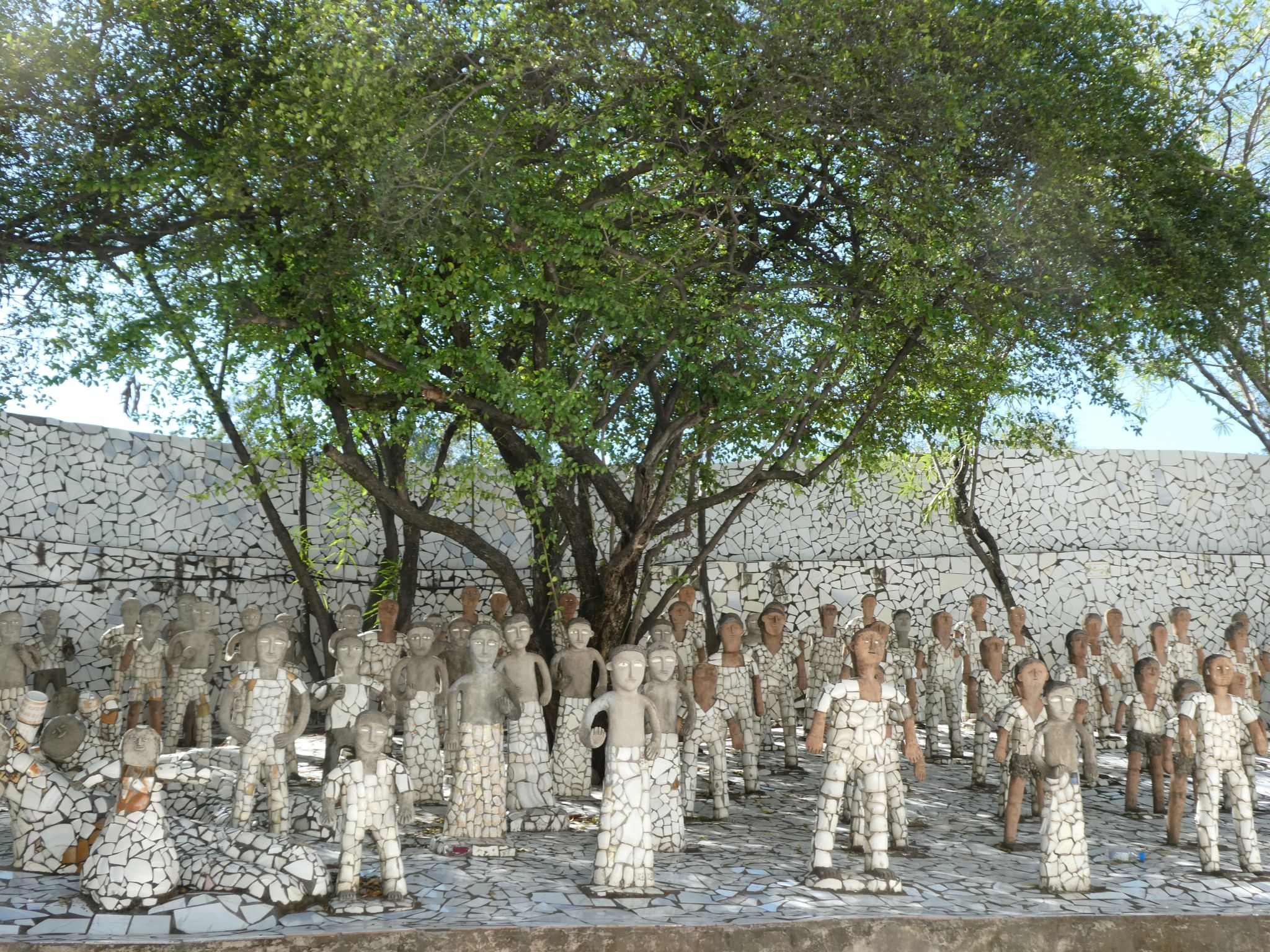 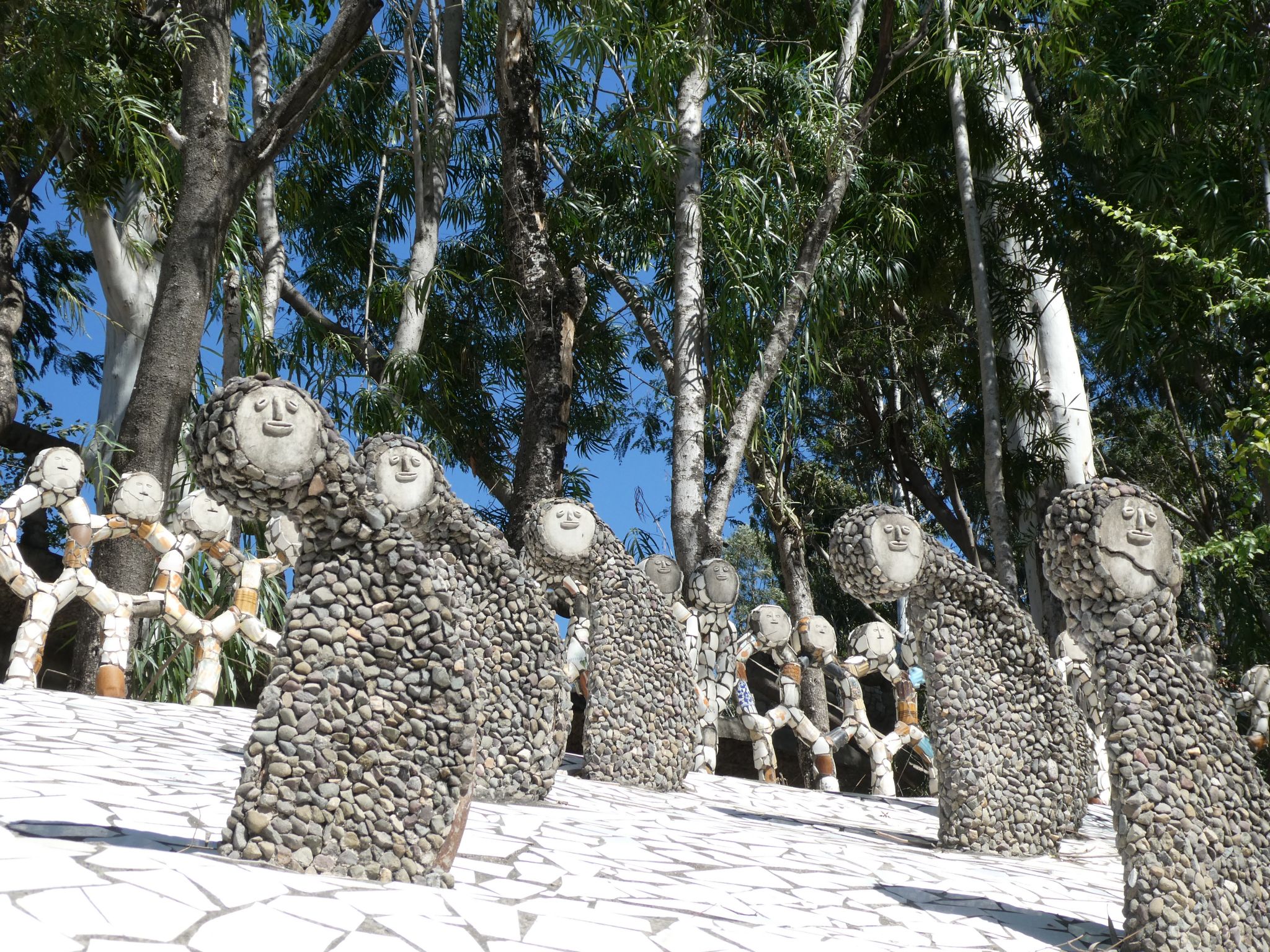 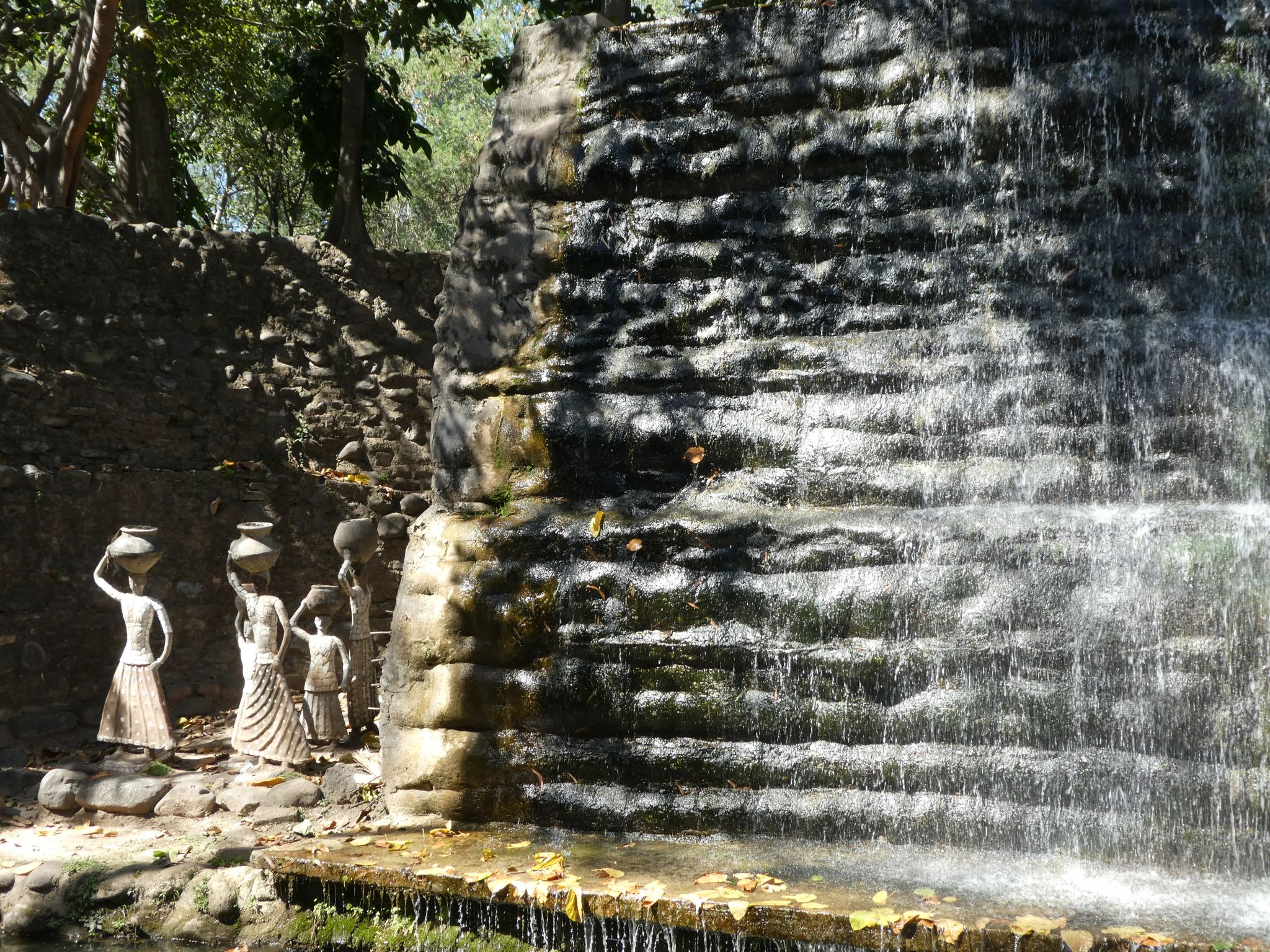 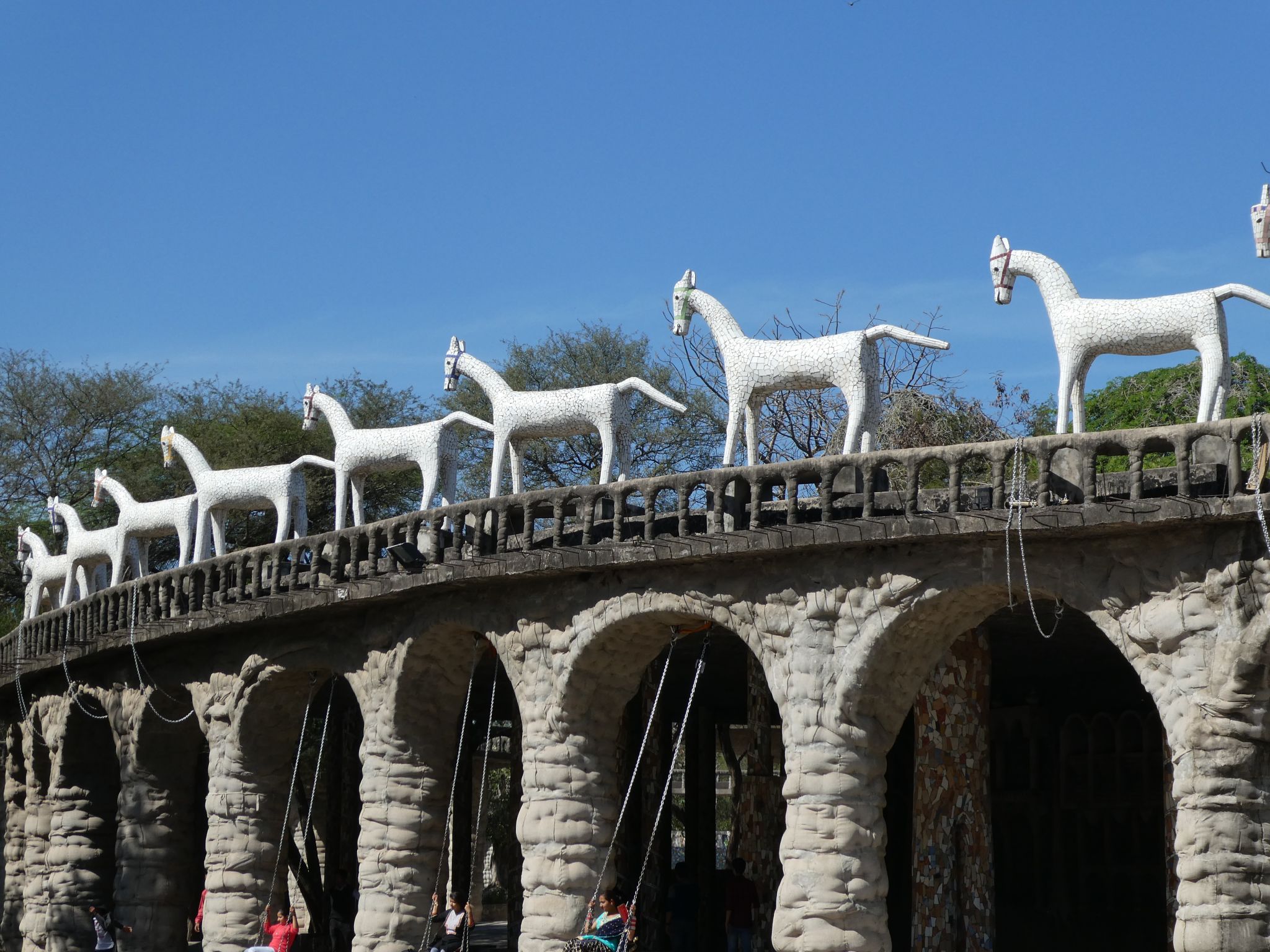 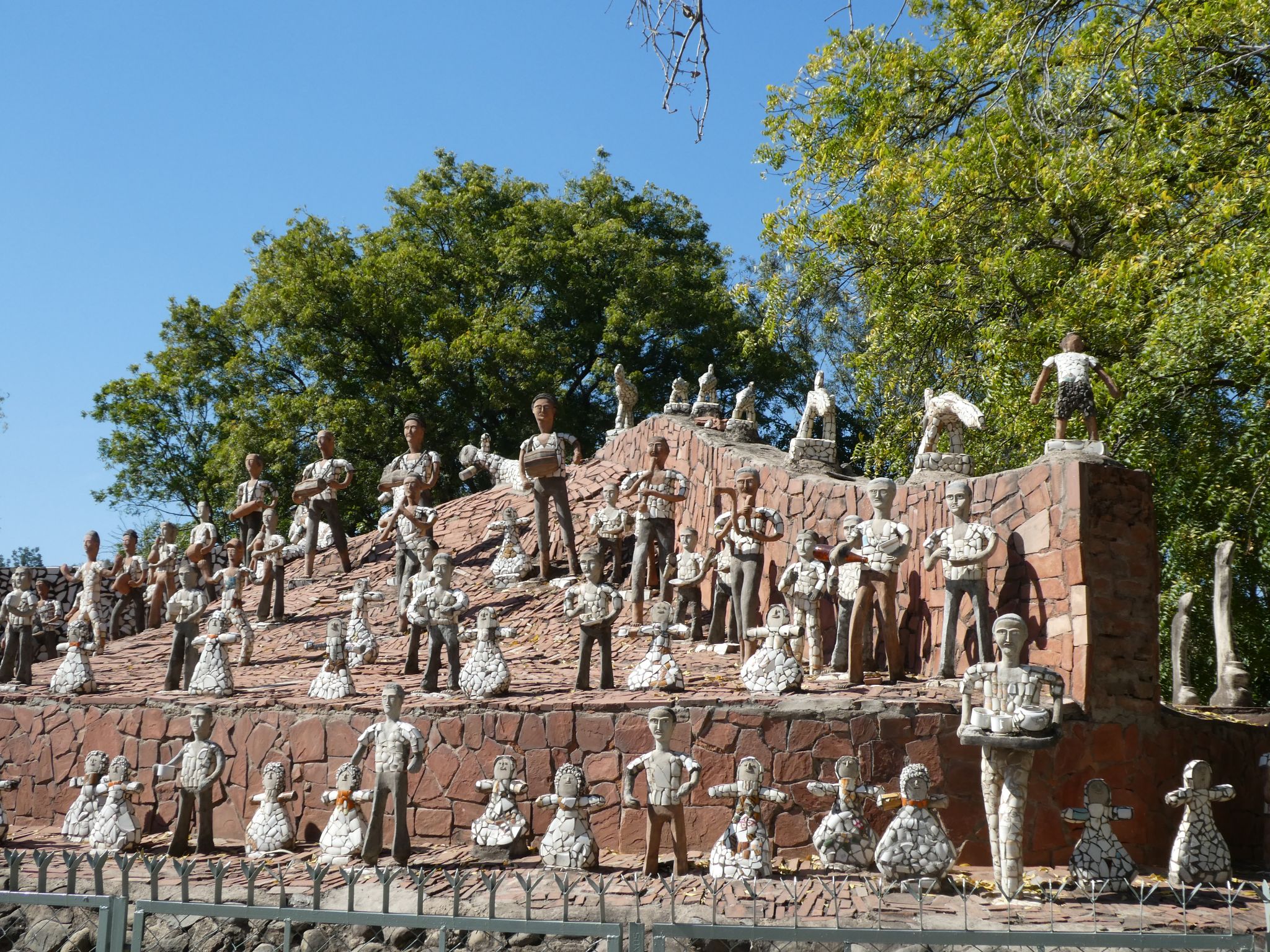 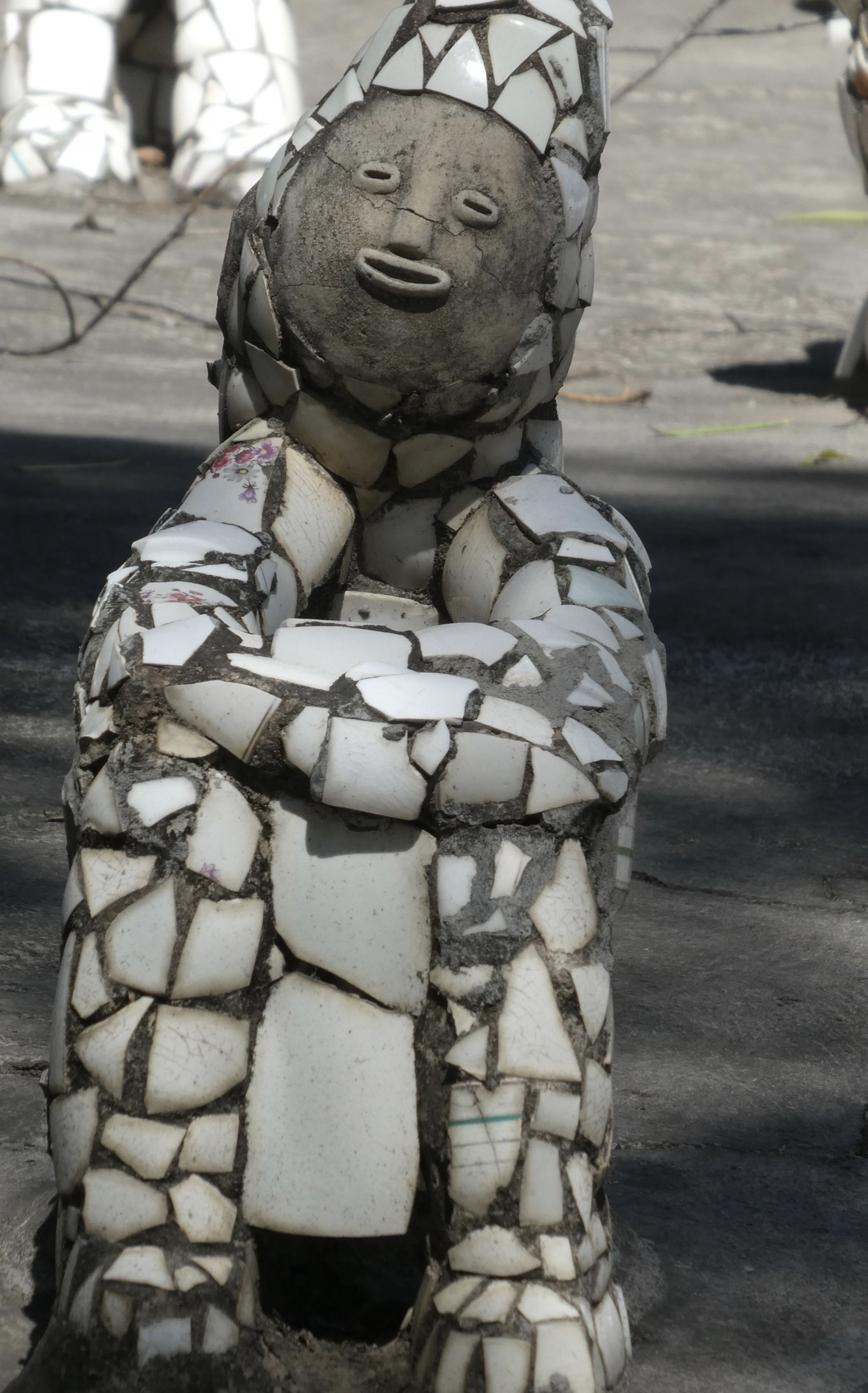 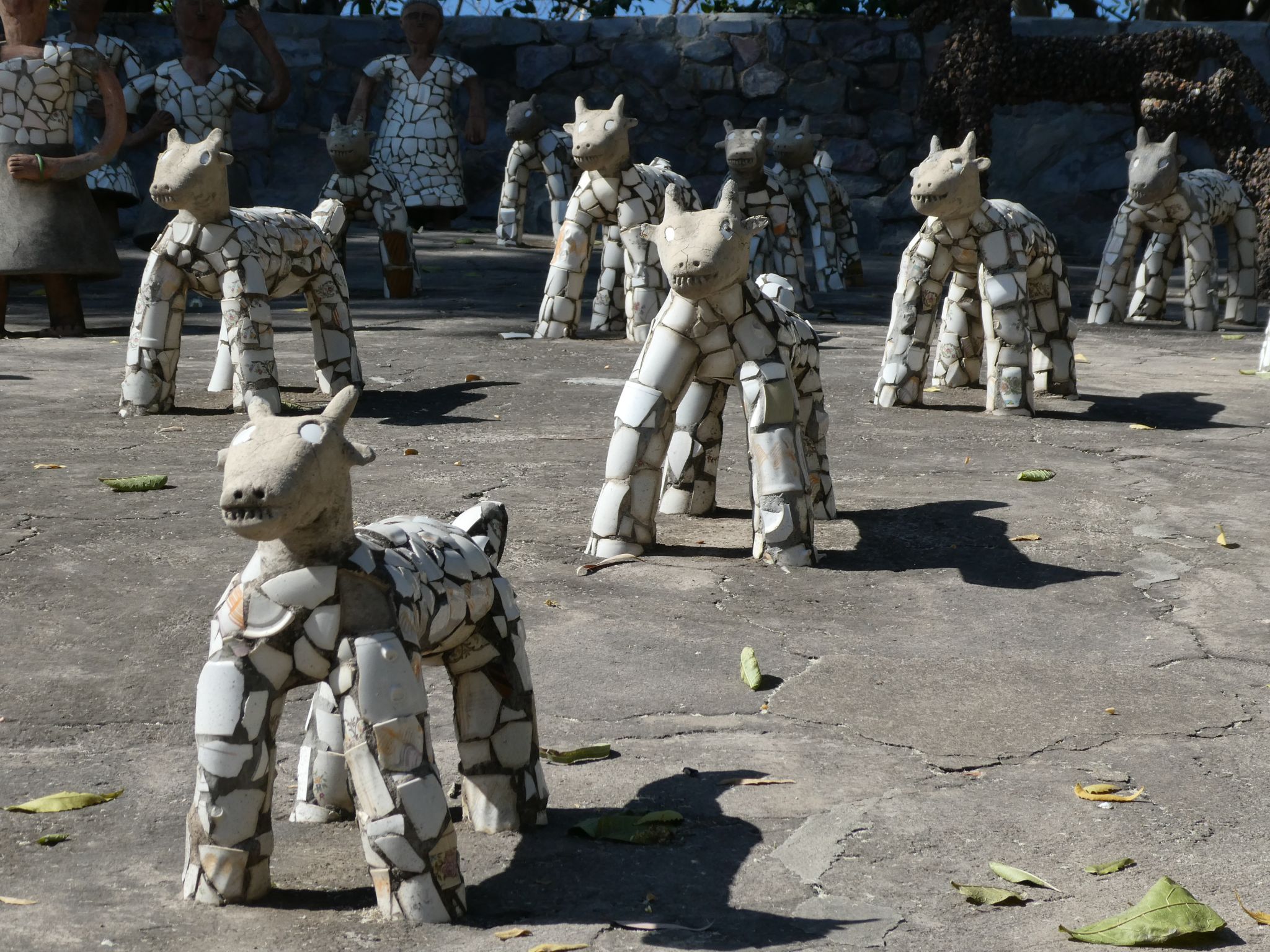 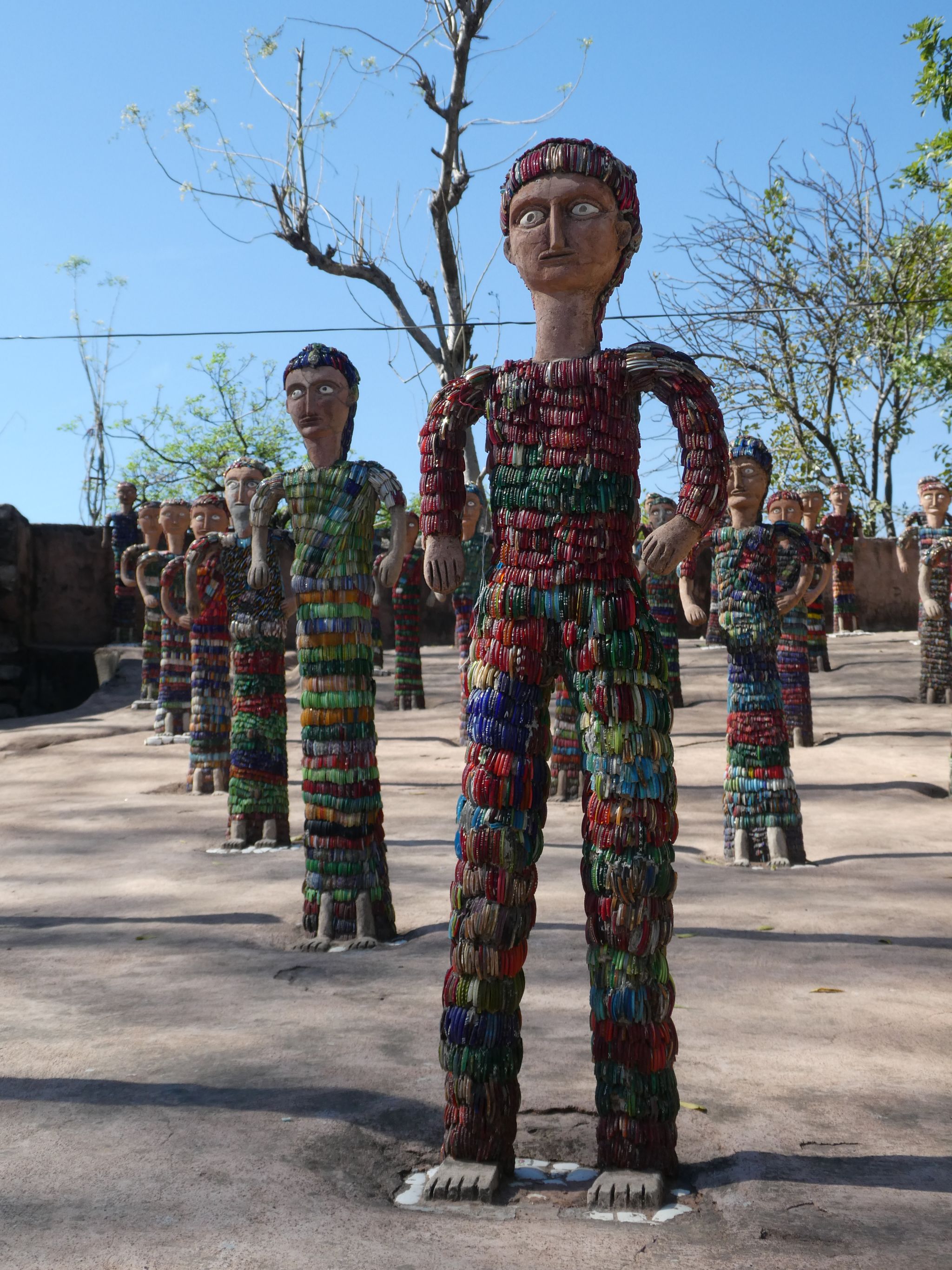 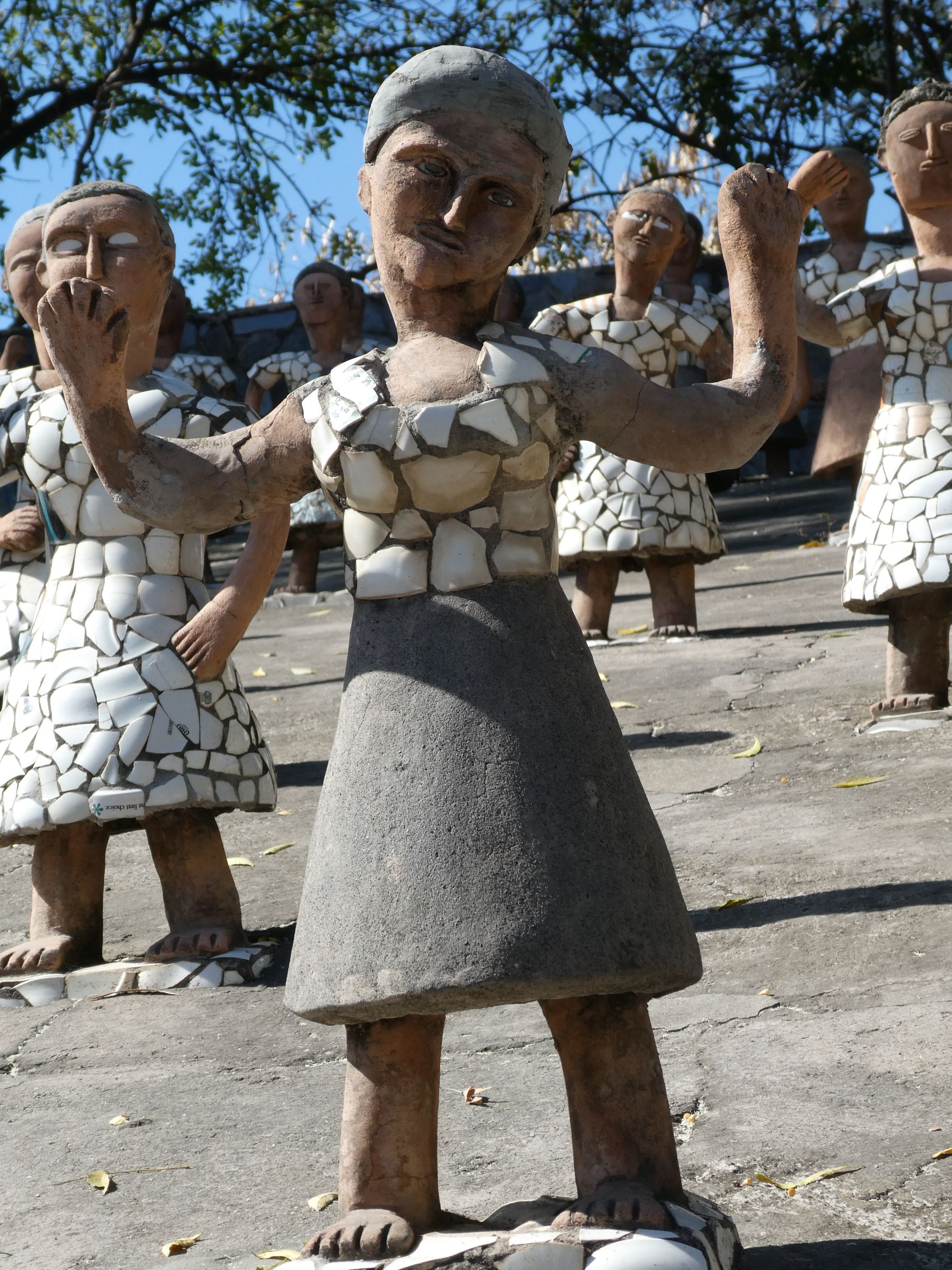 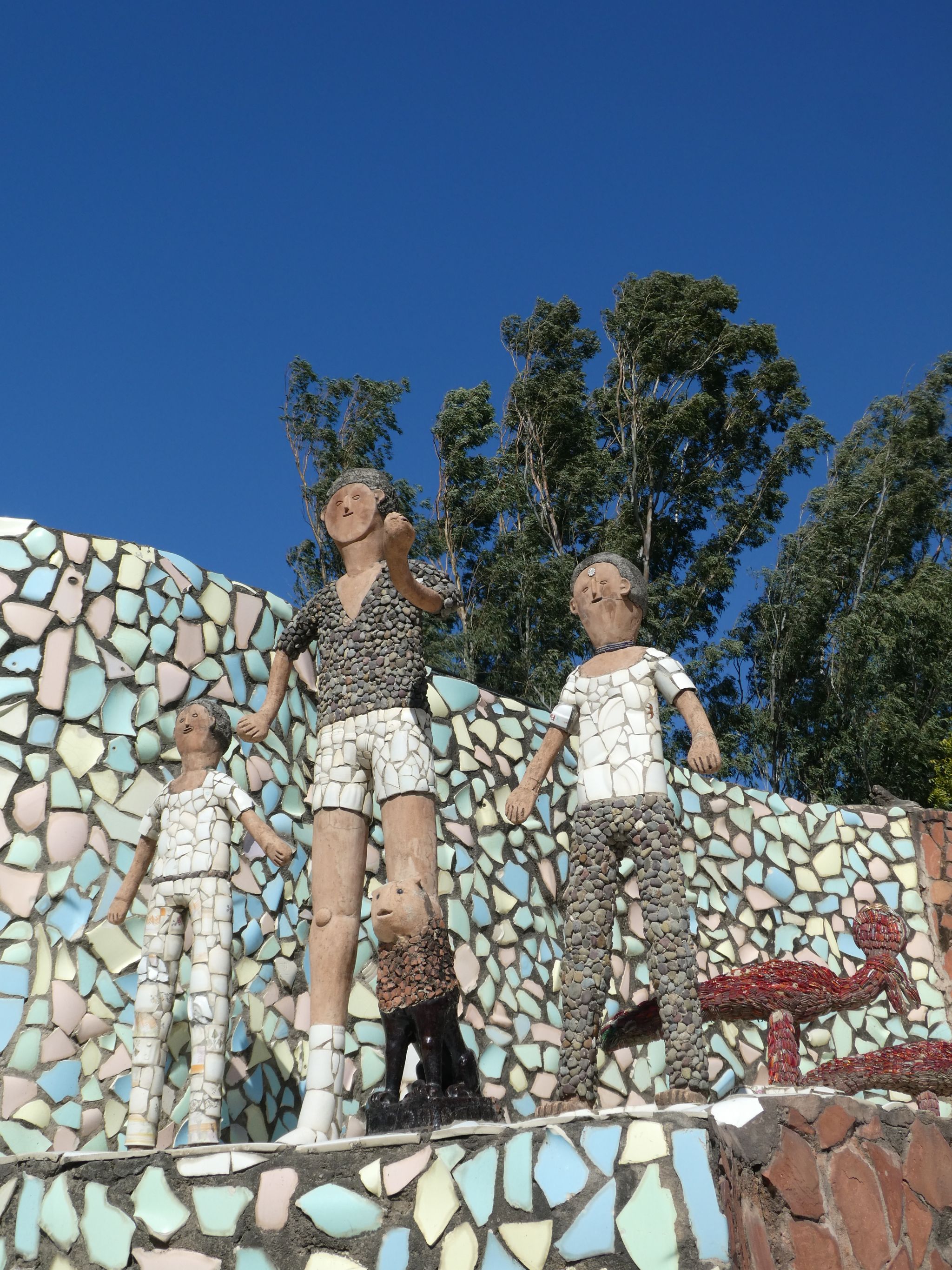 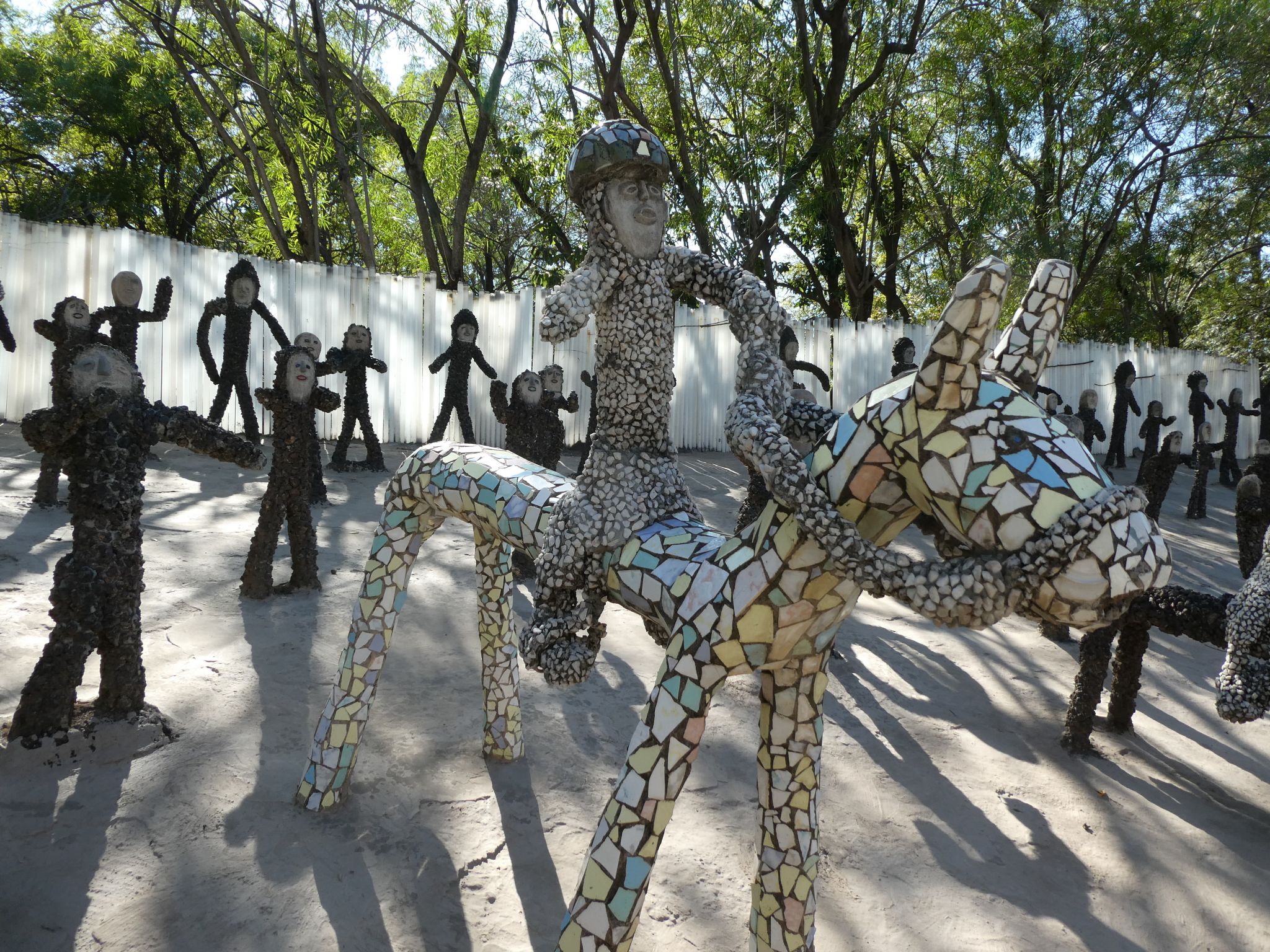 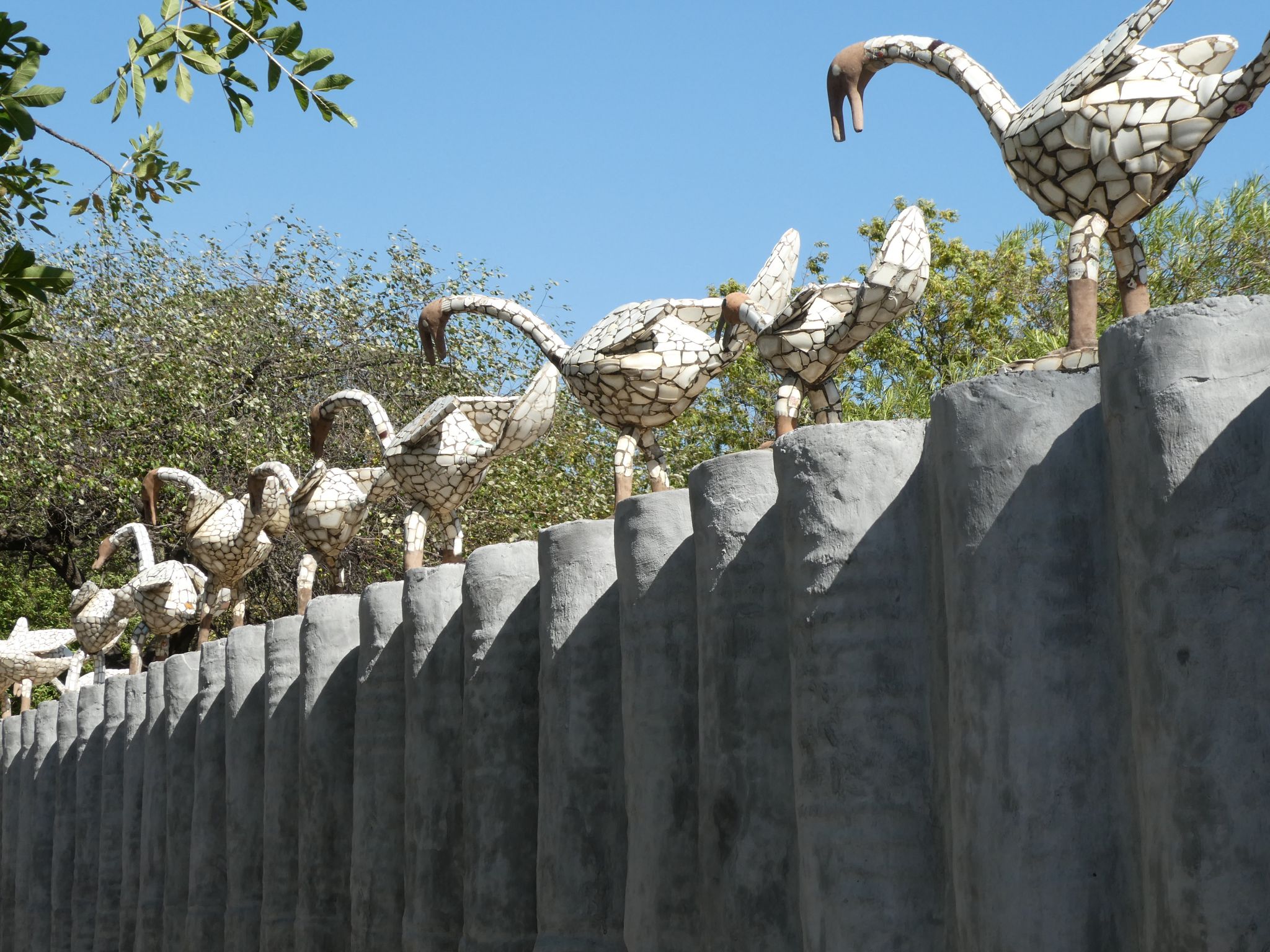 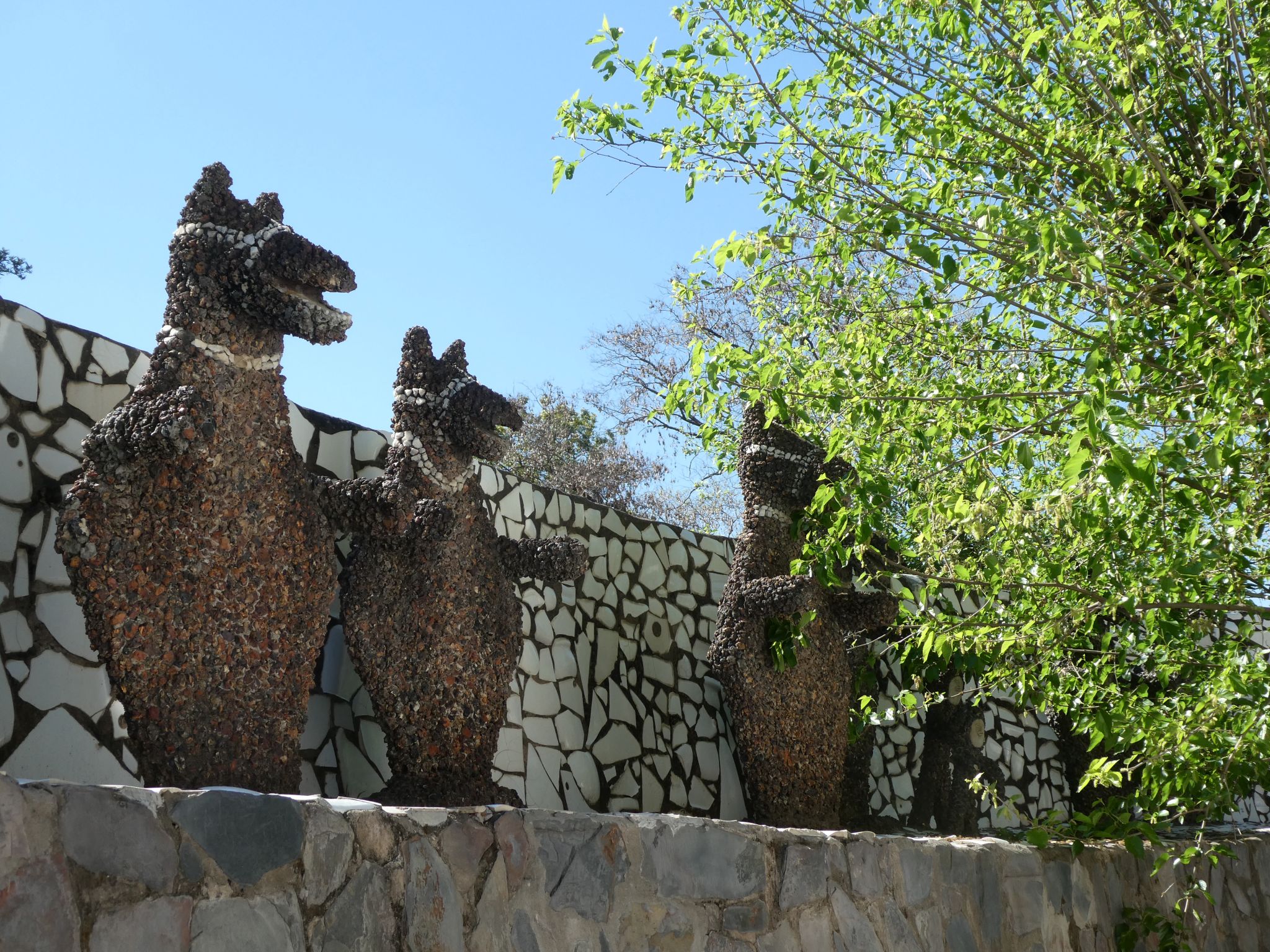 He also made wonderful figures from fabric remnants, which his son has since curated into dioramas. 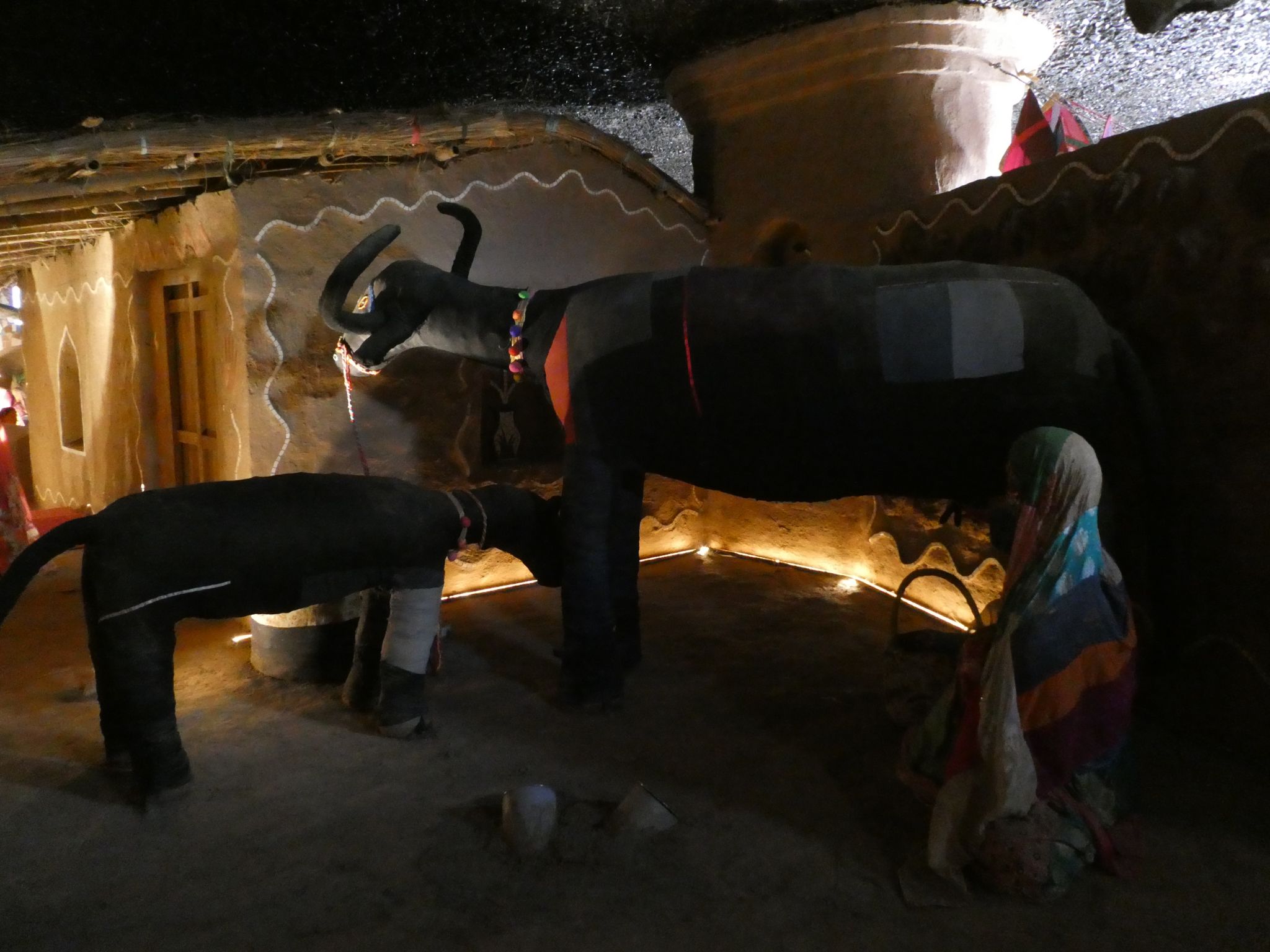 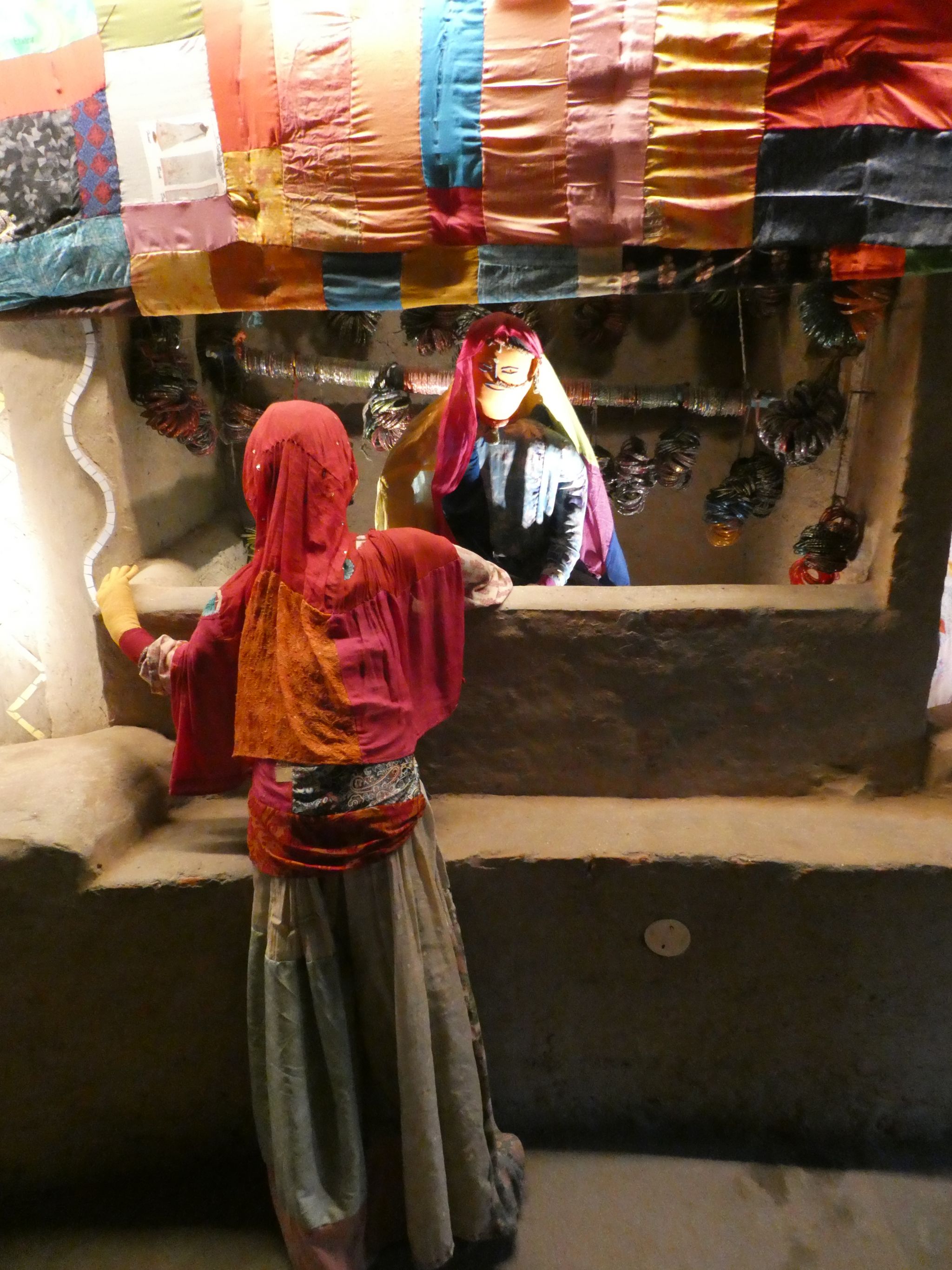