From Chandigarh we caught a local train to Kalka, then boarded the Himalayan Queen narrow gauge railway bound for Shimla.  The Queen is like a faded beauty star, a charming relic but definitely her best days were long ago.  The seats are small and cramped, there is no luggage space and no leg room – but the journey is well worth the discomfort.  Running continuously since 1902, the railway is one of the World Heritage-listed Mountain Railways of India.   The six hour, 96km route climbs over 2km, with a staggering 102 tunnels and 988 bridges.

After leaving the plains, the track passes through farmlands, then forests, winding its way around the hills and in places almost doubling back on itself.  The views are amazing. 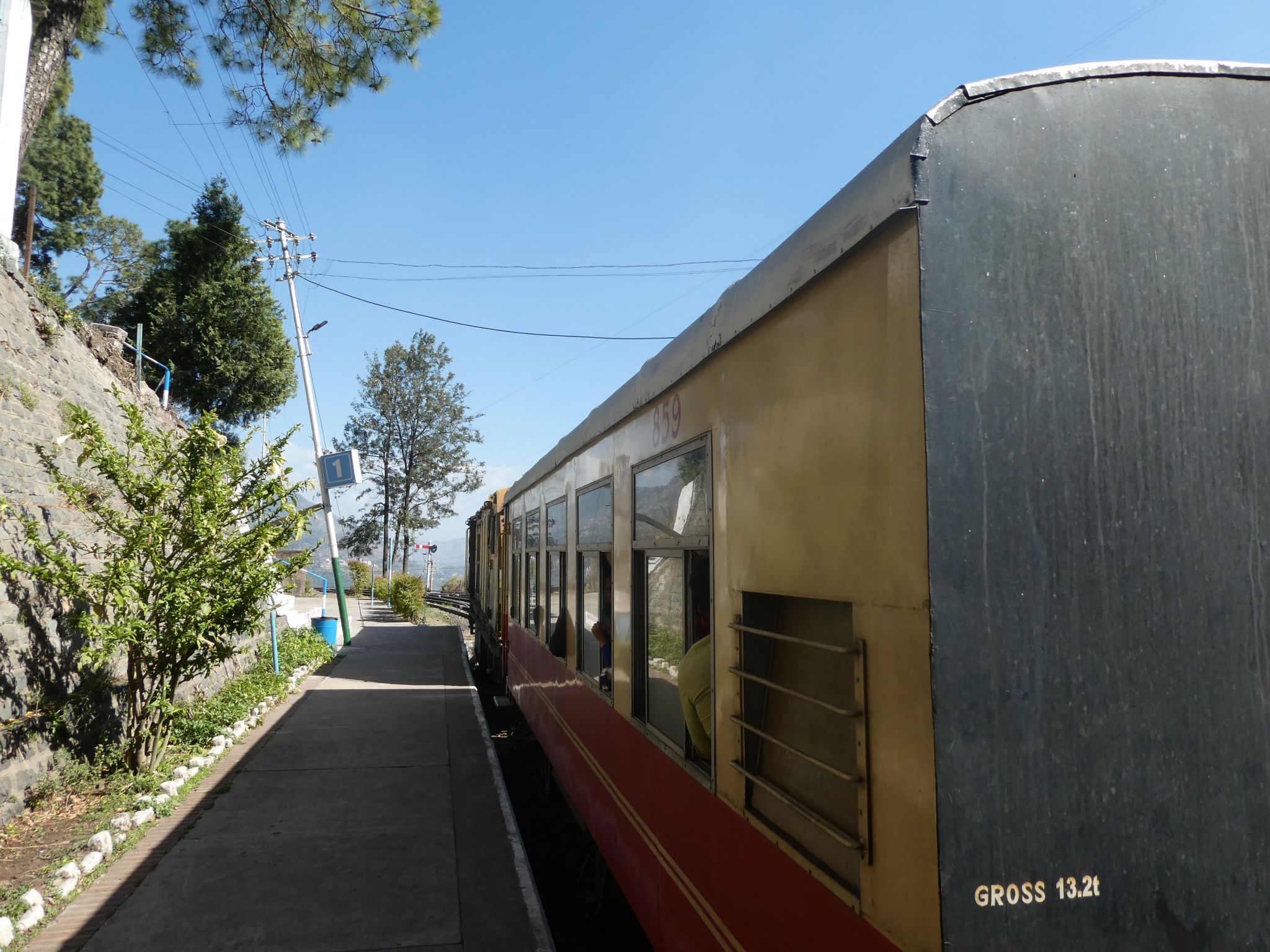 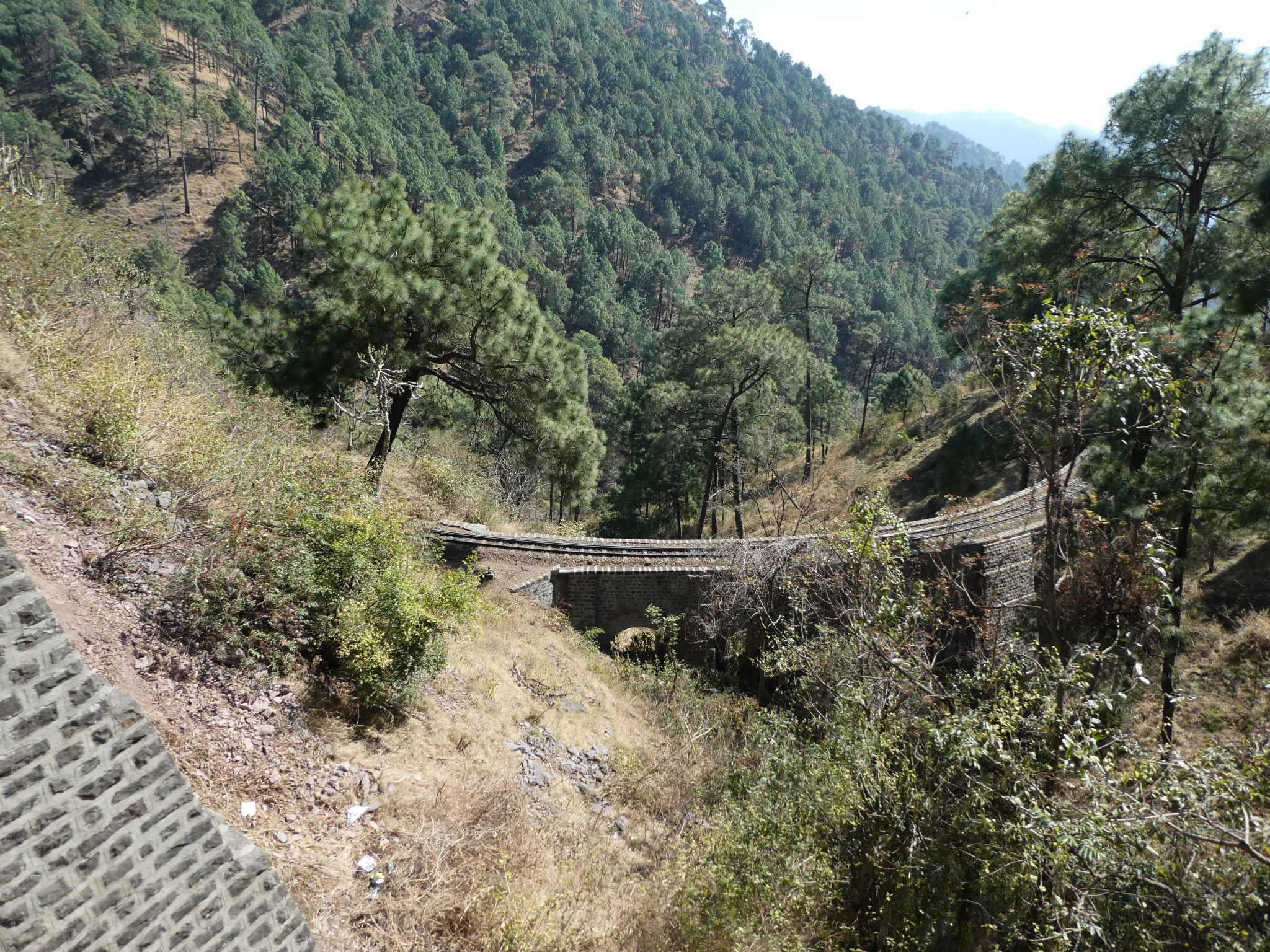 There are some very cute stations along the way. 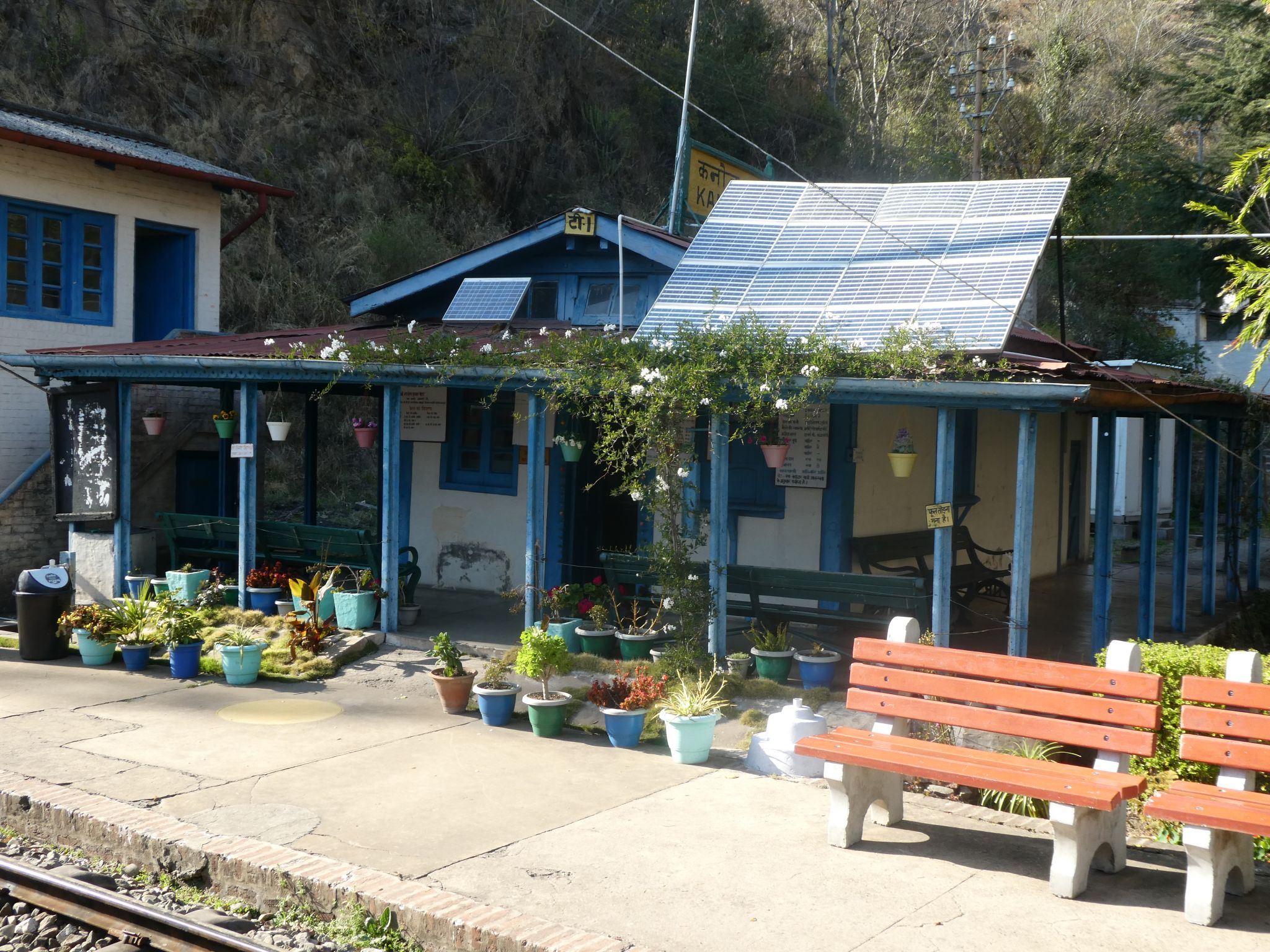 If you are quick, you can always get a quick snack when the train stops. 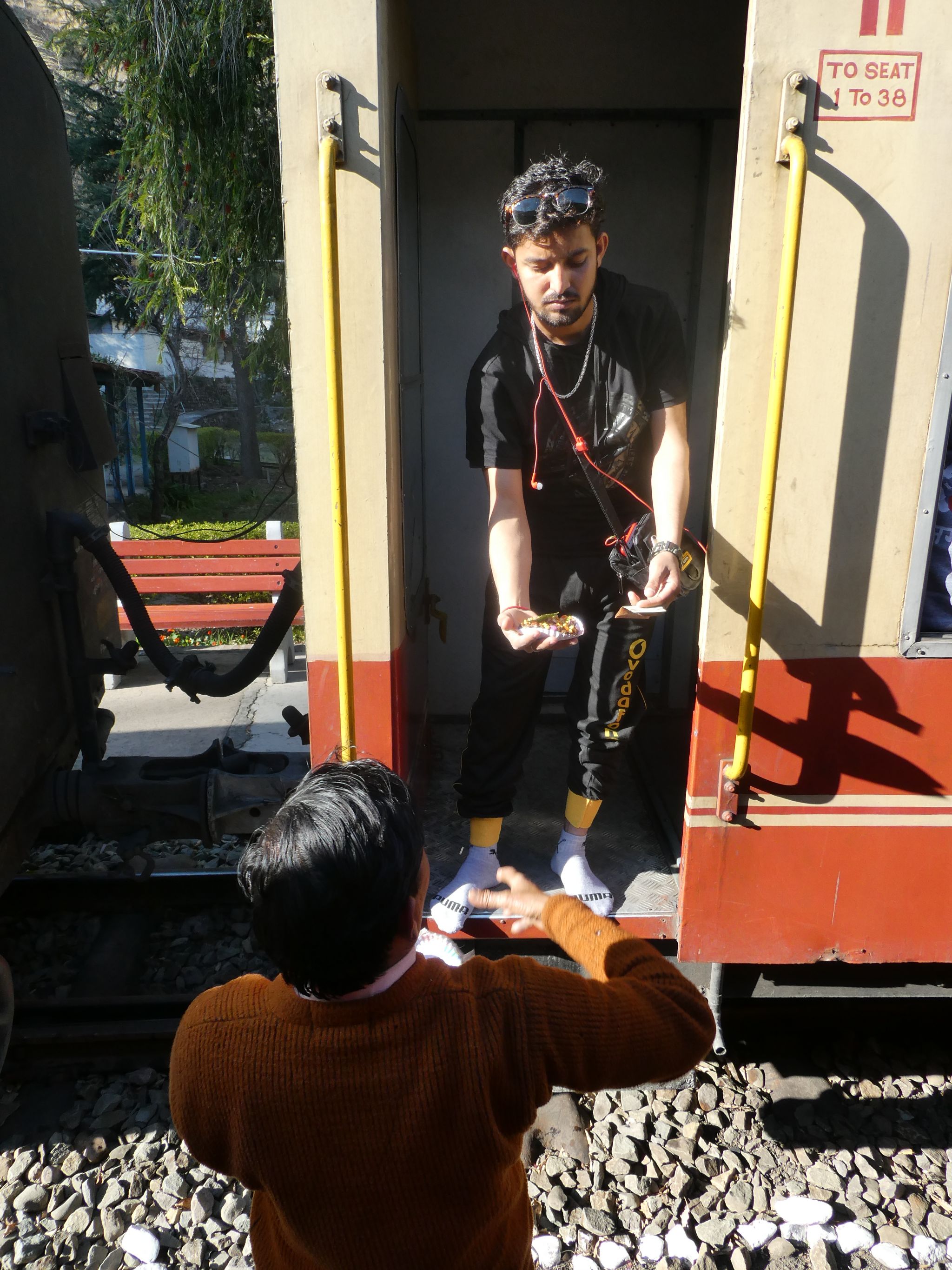 Shimla is spread out on roads running along the ridge lines, with switchbacks or stairs connecting the various levels. 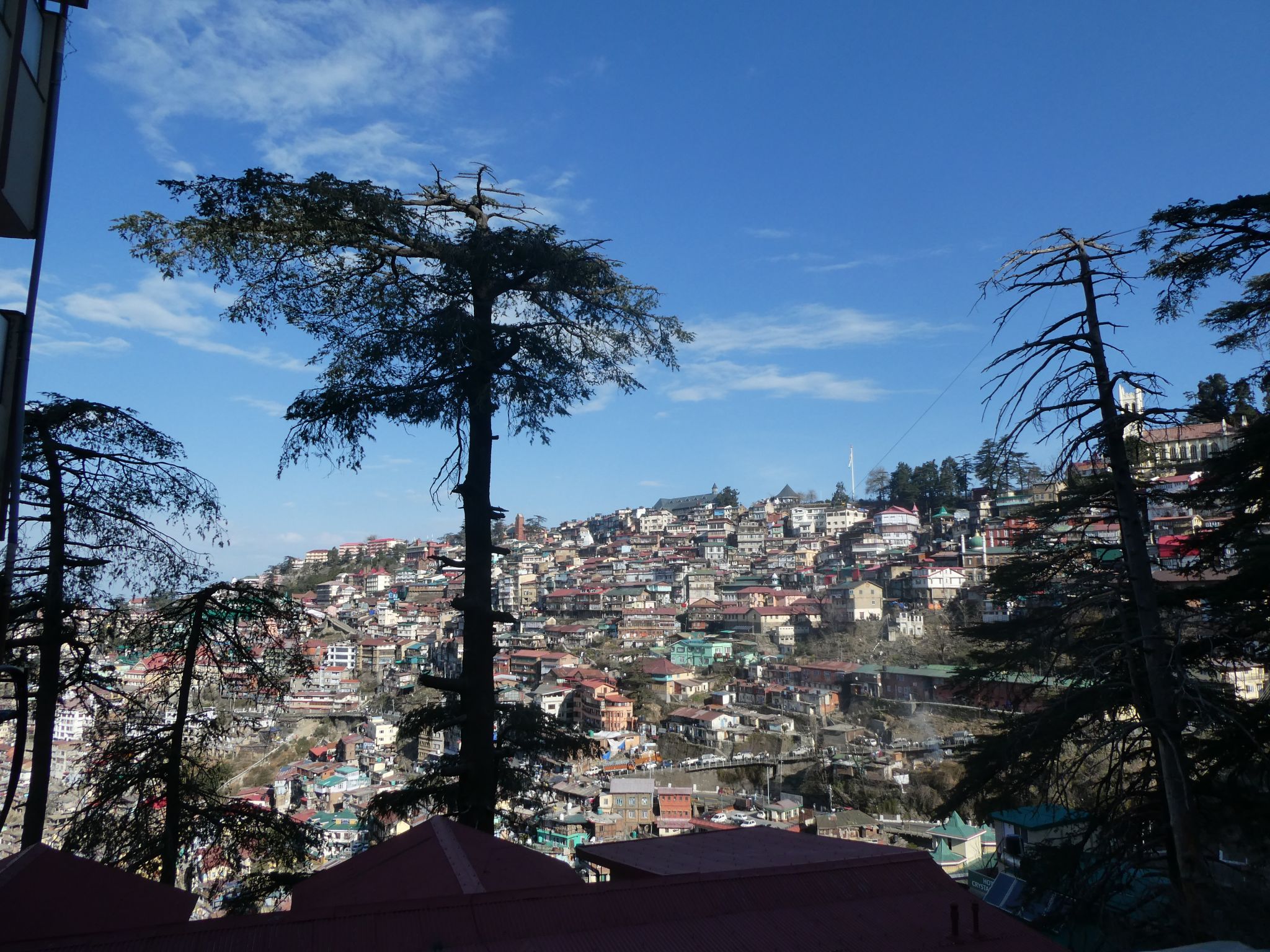 The upper levels are the province of tourists eating ice cream and browsing, but the lower levels are a bustling local market area and on the stairways between the levels there are many food vendors selling deep fried goodies and particularly good chole baturi (fried puffy bread served with spicy chickpeas).

Central Shimla is vehicle-free and perfect for strolling, which seems to be the primary local pastime.  Darjeerling, with similar topography but no traffic regulation, is a fume-ridden traffic snarl of blaring horns and congestion. Those guys could learn a lot from Shimla.

The only problem is the monkeys….

Shimla is rife with macaques, scampering over the rooftops, sitting atop telegraph poles surveying the streets, climbing in and out of derelict building or any open window. 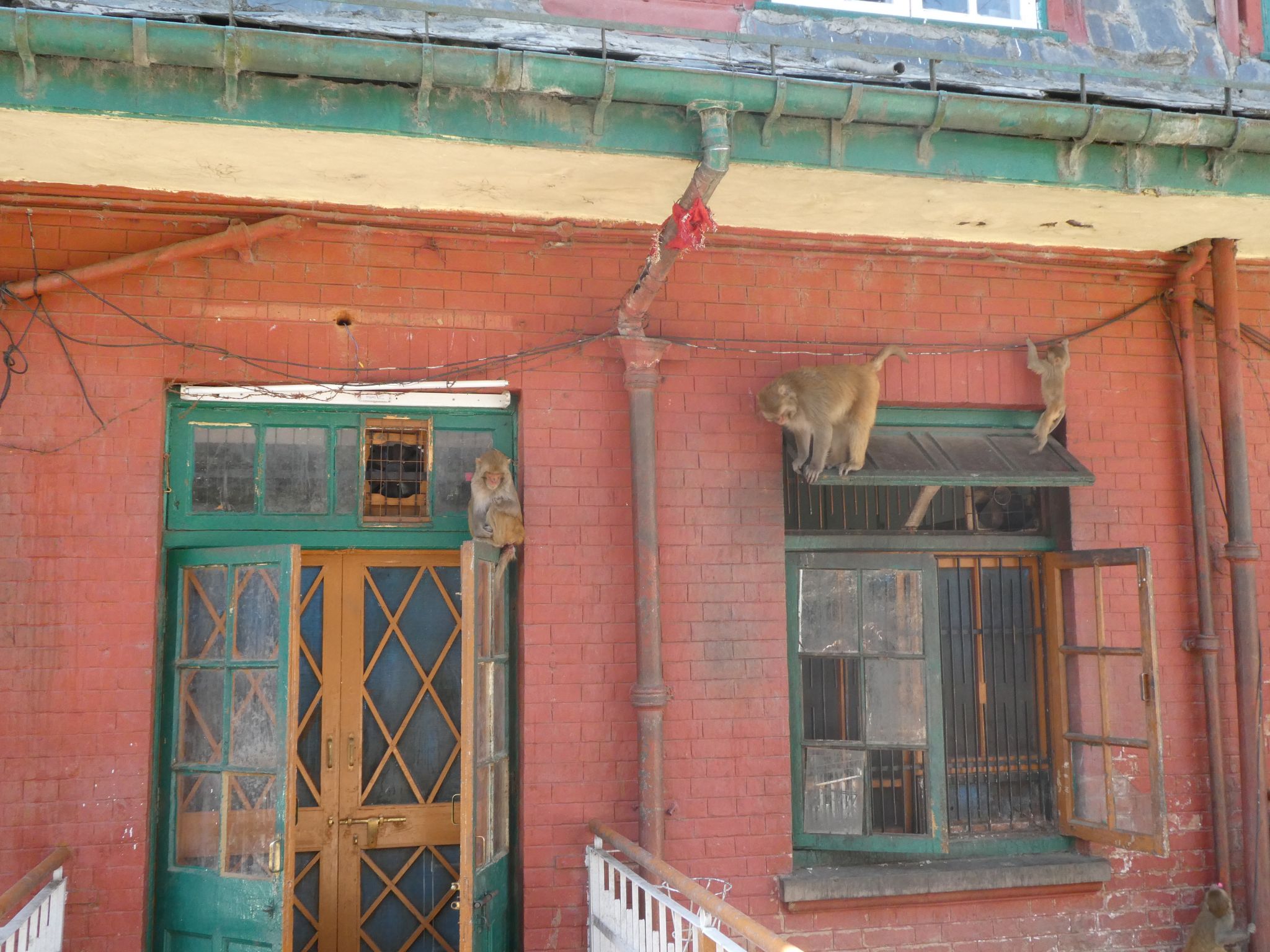 Swami Vivekananda taught that “Like monkeys, the hardships of life fall back when we cease to flee before them”.  Apparently the monkeys in Shimla haven’t read the venerable Swami’s teachings.

We were walking down one of the main streets, lots of people and shops.  Julie had in her hand a small drink tetrapak, and two macaques ran up and stopped in front of us, barring our path.  One tried to snatch the tetrapak and by reflex Julie lifted it up out of reach, whereupon the other, larger one ran around John and, from behind, grabbed Julie’s leg with both paws and bit into her calf.  Not a nip, he/she actually bit into the flesh and did not let go, and was not going to be shaken off.  Julie tossed the tetrapak to the ground, whereupon the first one grabbed it, the other one detached from her leg, and they both ran off.

Ten out of ten for strategy and co-ordination.  Ditto for outcome, although zero for reward as the container was actually empty.

Having not been previously immunised for rabies, this then meant the full post-exposure regime of vaccinations on days 0, 3, 7, 14 and 28, together with an immunoglobulin set.  As we are constantly moving, this proved a logistical challenge, requiring rabies vaccinations in Shimla and Amritsar in India, immunoglobulin in Tashkent, and more vaccinations in Bukhara and Nukus in Uzbekistan, and in Kas in Turkey.

Given the prevalence of rabies and monkeys in India, needing a rabies vaccine didn’t raise any eyebrows in India.  In fact, the doctor we saw on the day of the bite said it was his second for that day.  A young local boy had come in earlier that morning after being bitten on the hand by a monkey.

But there are no monkeys in Uzbekistan and communicating ‘I have been bitten by a monkey, I need rabies vaccine’ caused some consternation there.  Likewise Turkey, where language was less of an issue but the very idea of being bitten by a monkey was apparently quite exotic.