Samarkand seems to have existed forever, well at least since the 5th century BC.    In 329AD, Alexander the Great conquered the city and said “everything I have heard about Marakanda is true, except that it is more beautiful than I imagined”. It hit its stride from the 6th century AD as a key trading centre on the Silk Road and continued to grow in importance because of its strategic position as a crossroads on the trade routes from China, India and Persia.

It was all but destroyed by Chinggis Khan in 1220 but was revived when Timur the Great made it the capital of his extensive empire in 1370.  A building frenzy resulted in many, many intricate and impressively massive mosques, mausoleums and medresses.  It became a centre of learning as well under Timur’s grandson, Ulegbek and many believe that at this time scientific theories and knowledge were centuries ahead of such knowledge in the West.

The city declined in the 1600s when the capital of the then dynasty was moved to Bukhara, and was virtually abandoned in the 1800s after earthquakes devastated much of what remained.

It was re-populated by the Emir of Bukhara in the late 1800s, but remained low key until the Russians forcibly took control in 1868 and included it on the trans-Caspian rail line by the end of the century.

To their credit, the Russians did a massive amount of work restoring the ancient buildings, although some were in such a state of decrepitude that the work was more a completely new build than a ‘restoration’. Not to their credit, they built walls around the historic area to hide from tourist eyes the suburbs of ordinary citizens.  This makes the historic precinct feel like a huge outdoor museum, as beautiful as it is.

The most impressive, in size and scale is The Registan, a massive square with a huge medressa on each of three sides. 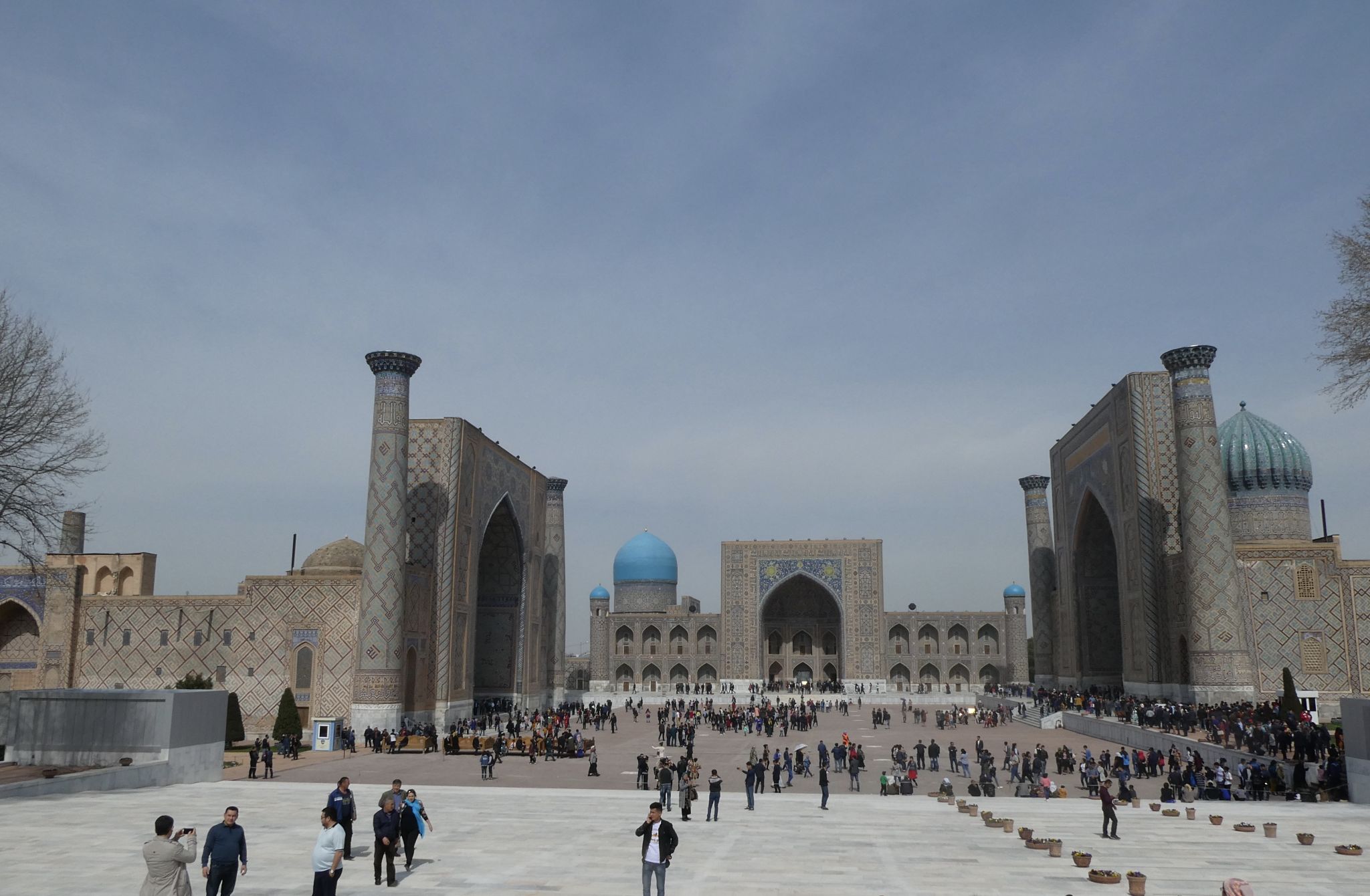 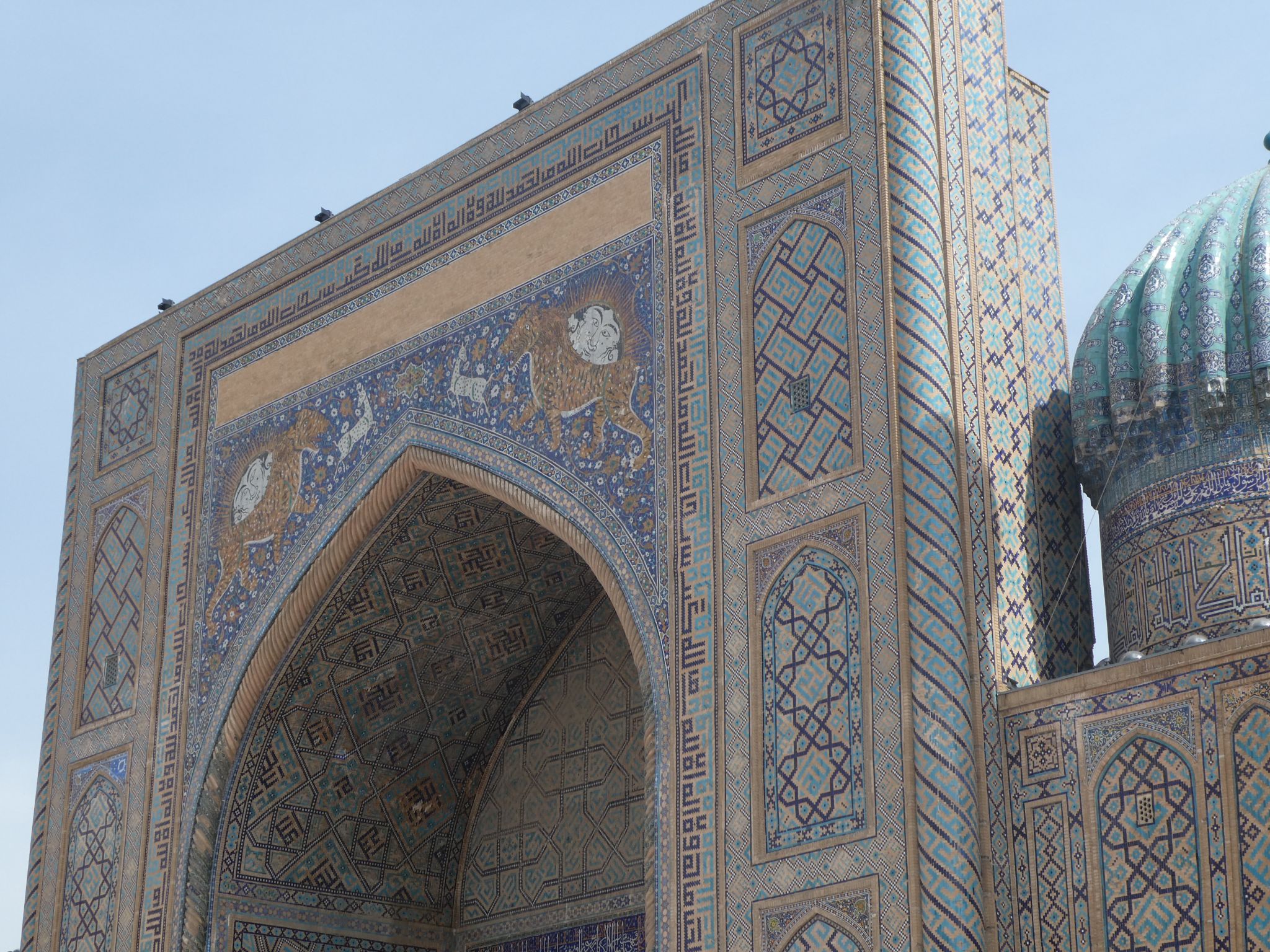 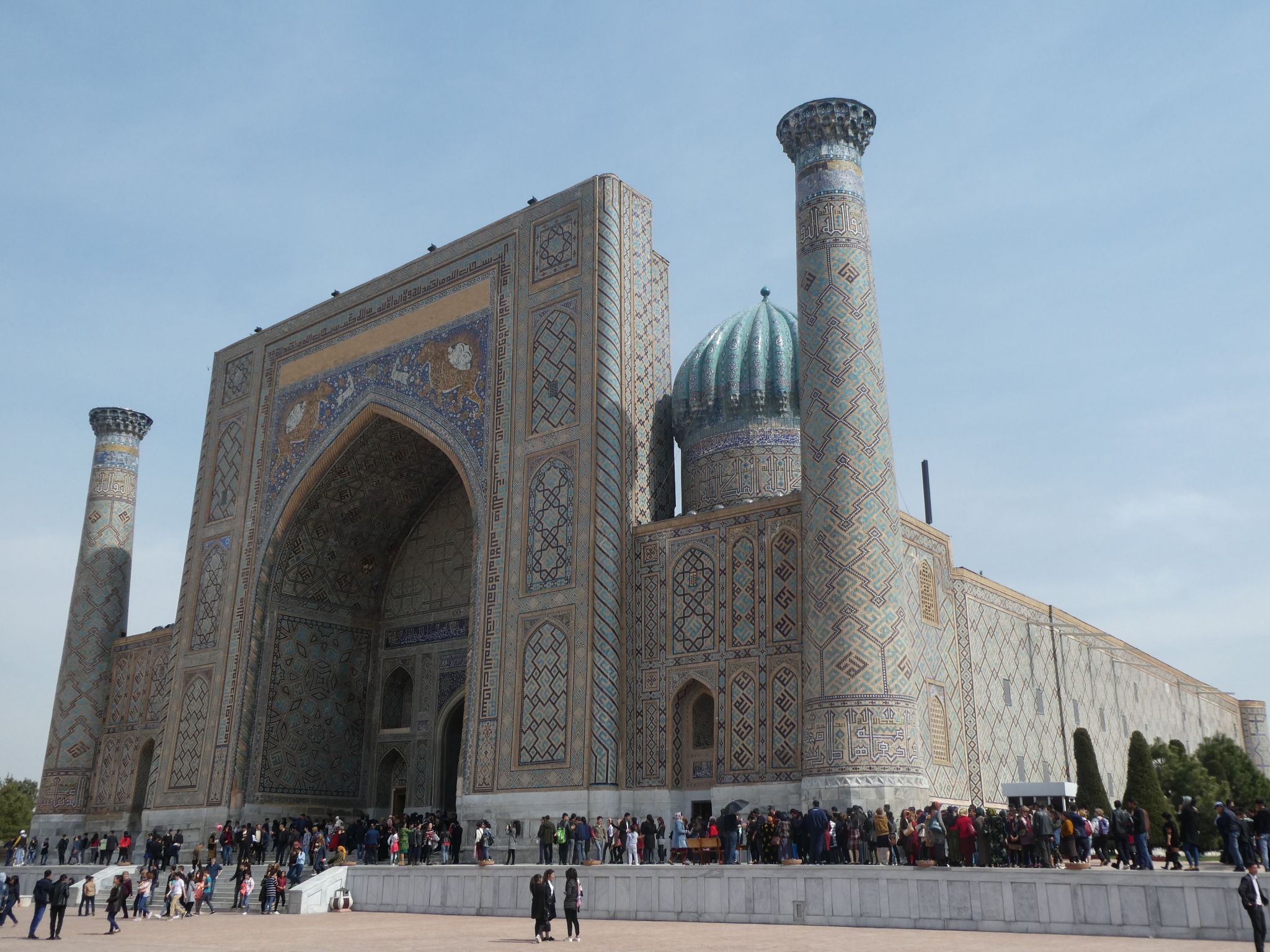 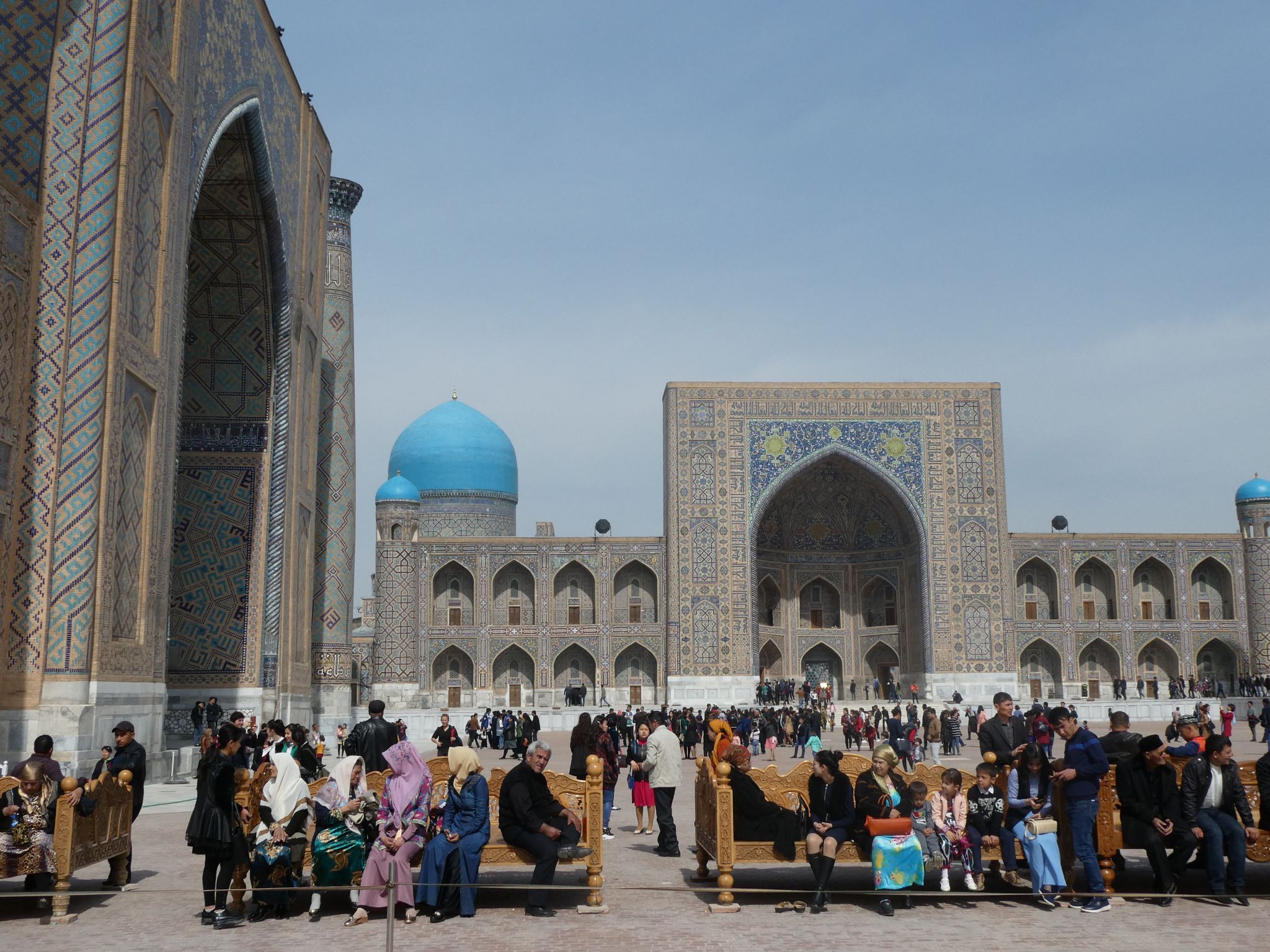 The interior courtyards of the medresses were just as impressive. 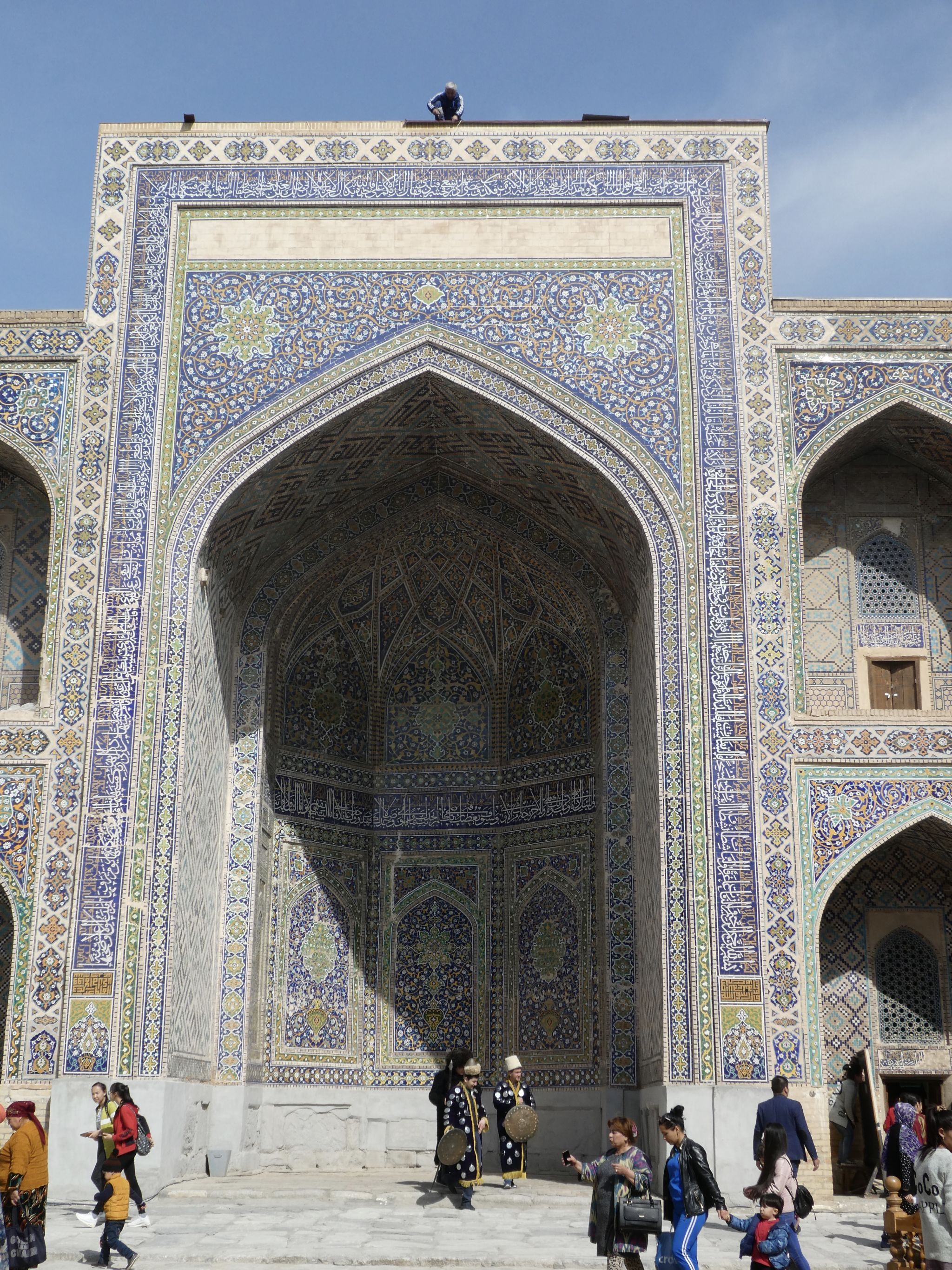 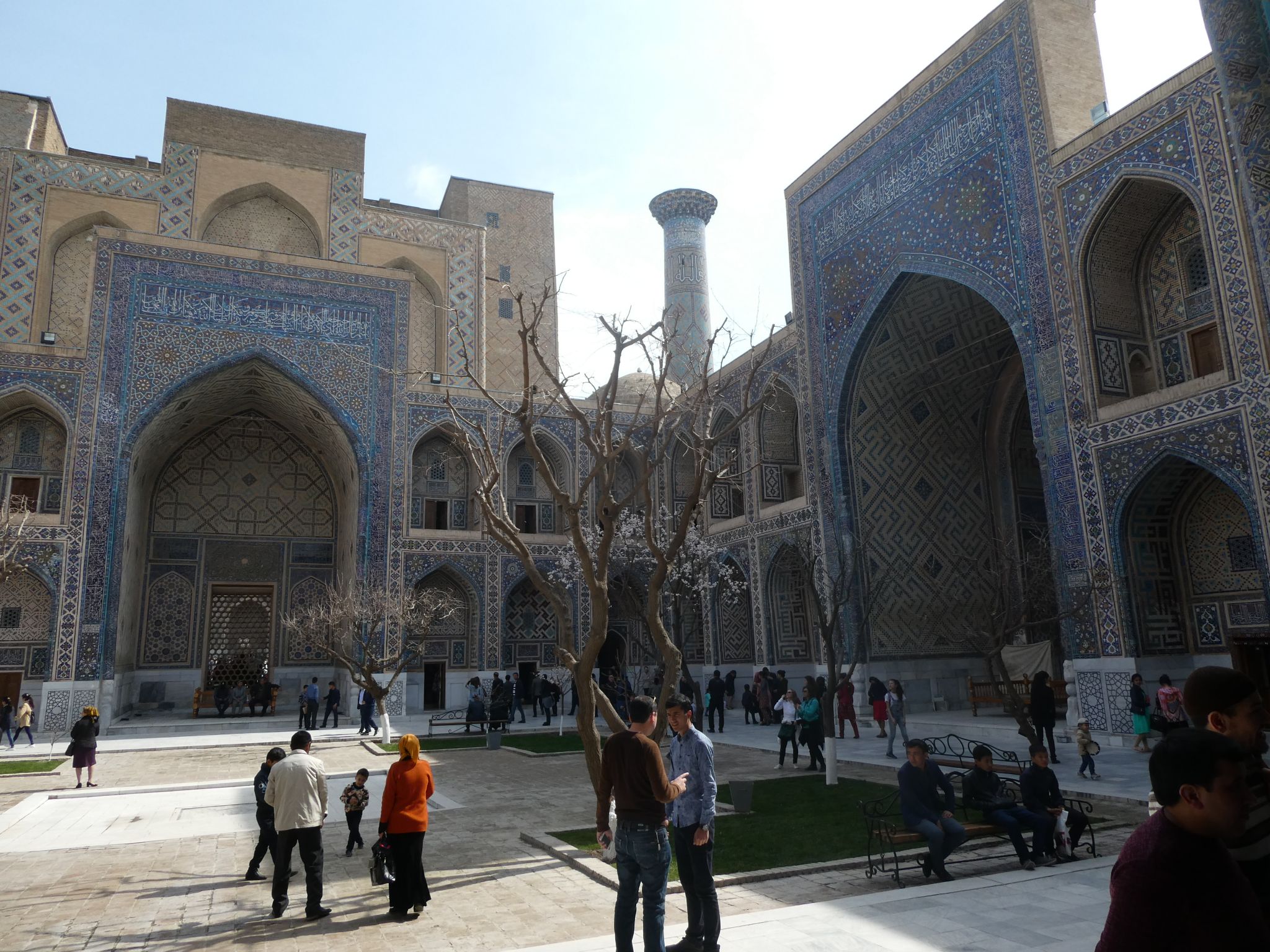 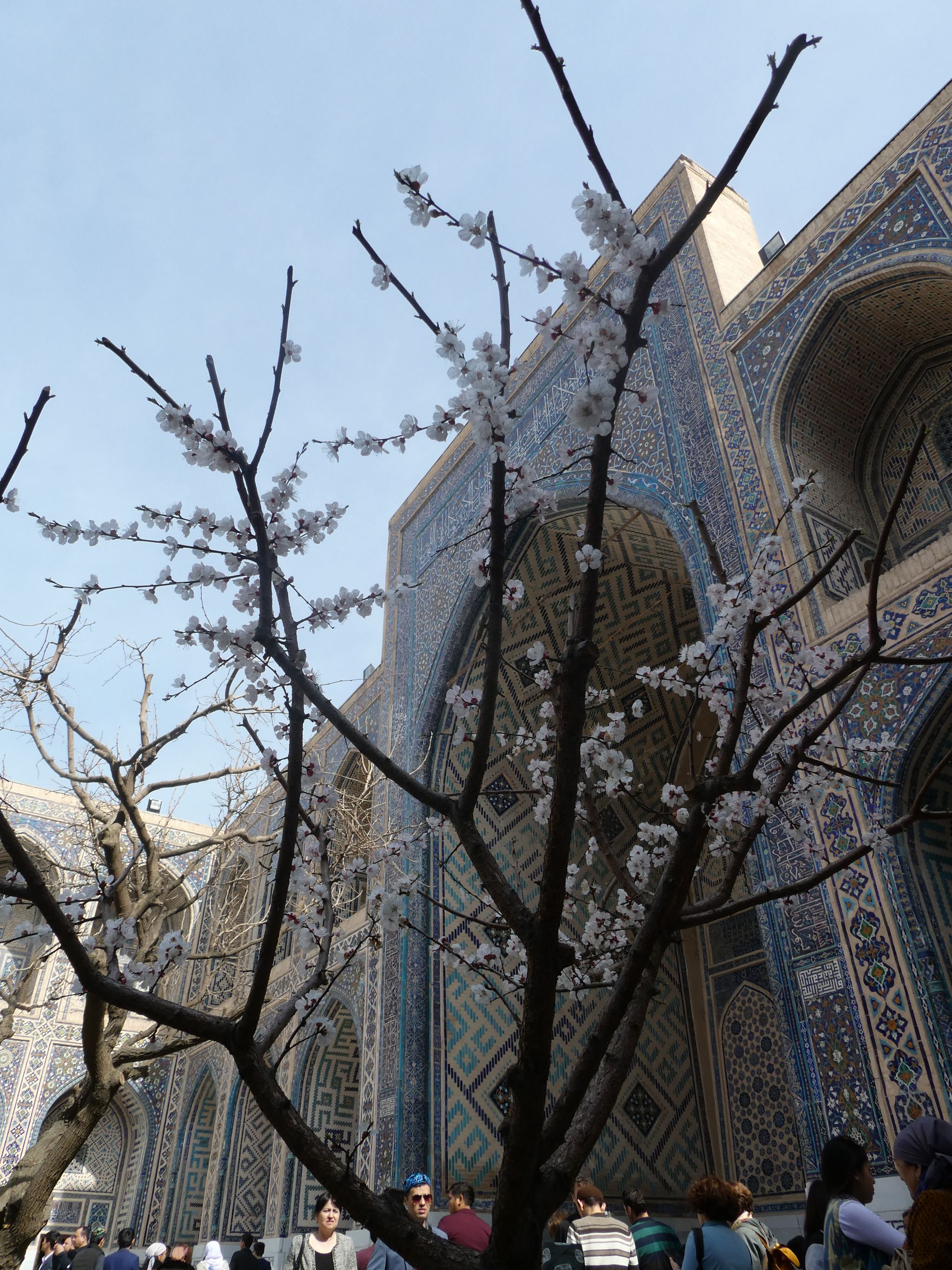 Some of the interiors of the buildings were works of art in themselves. 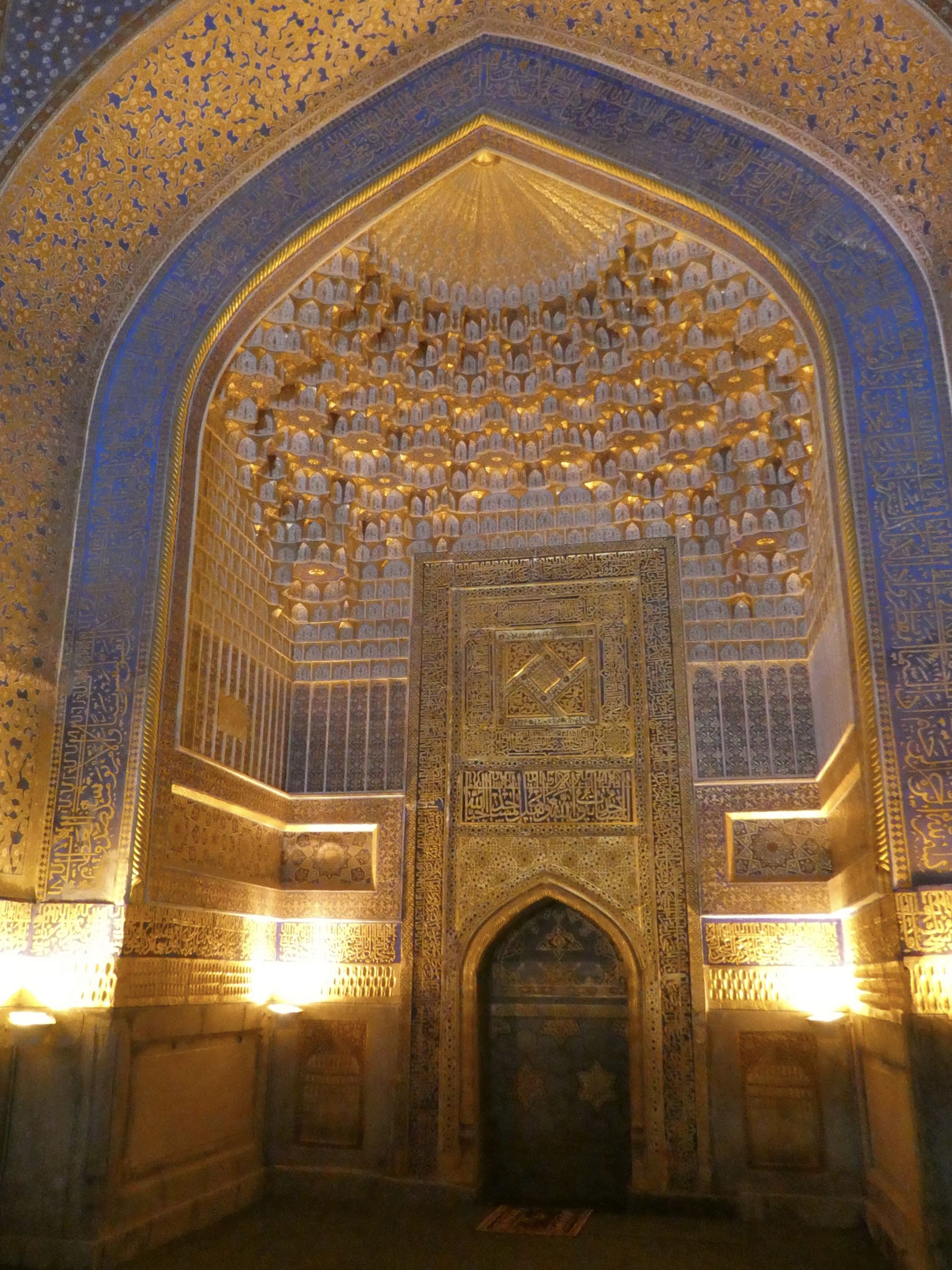 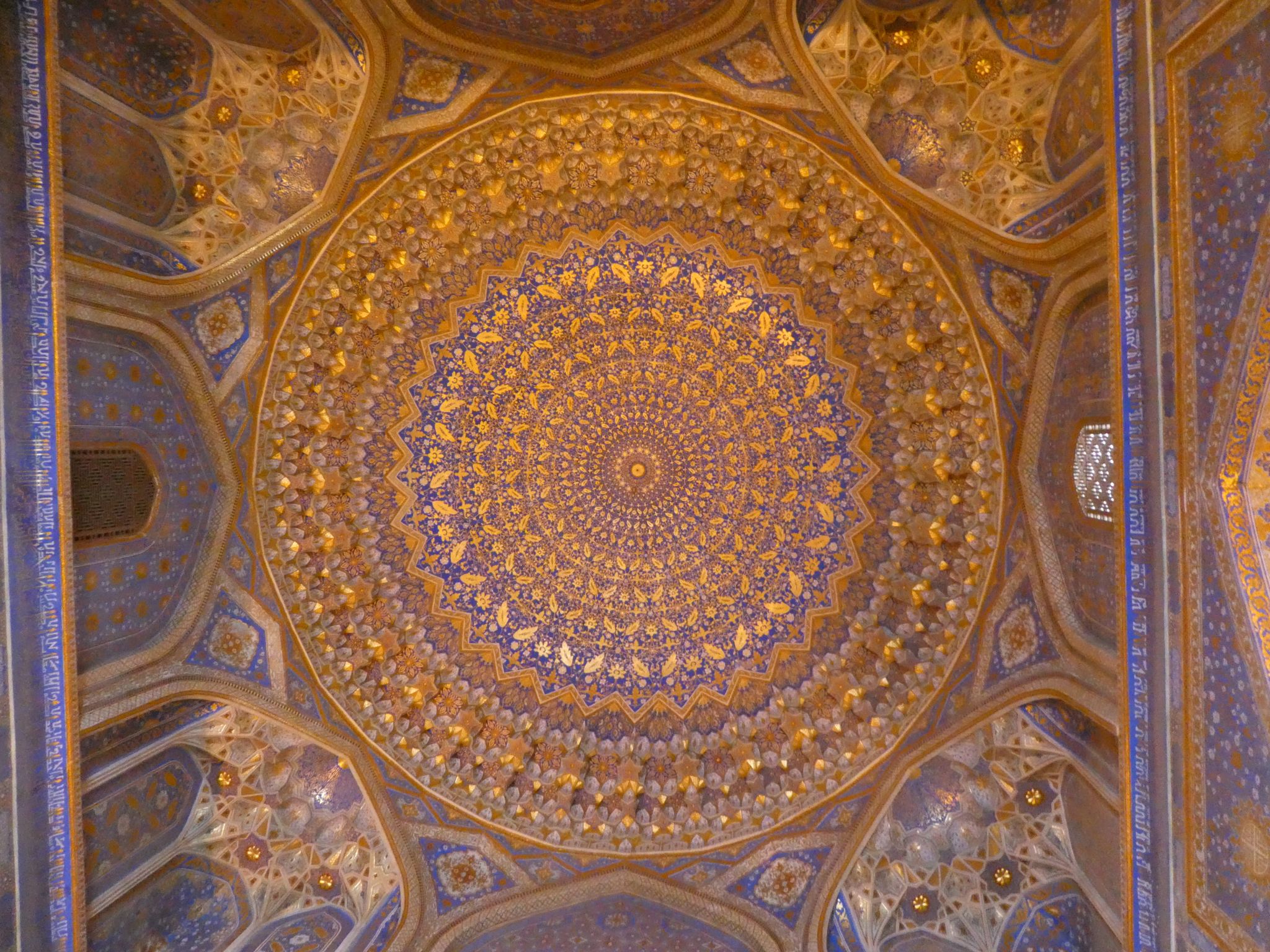 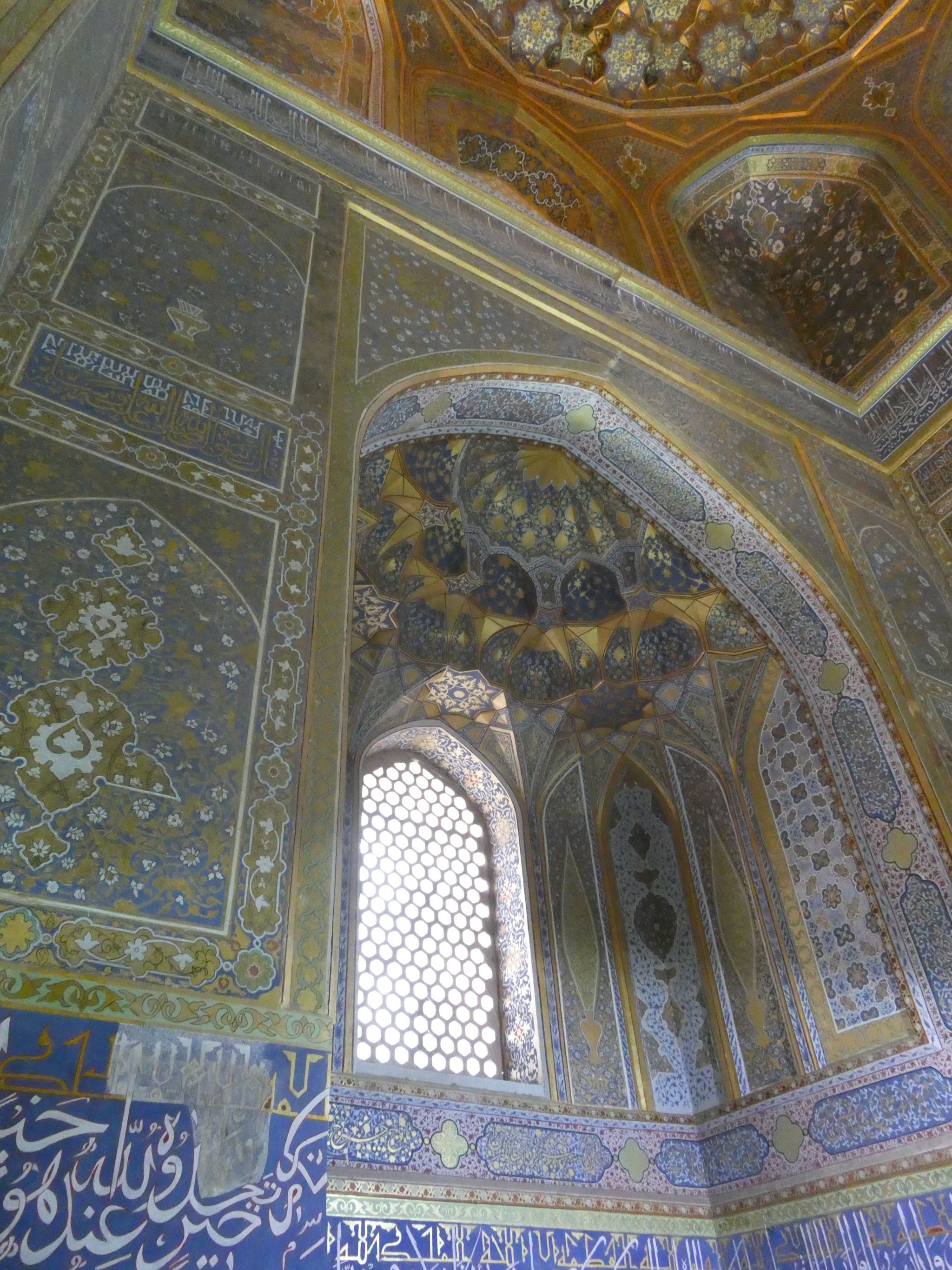 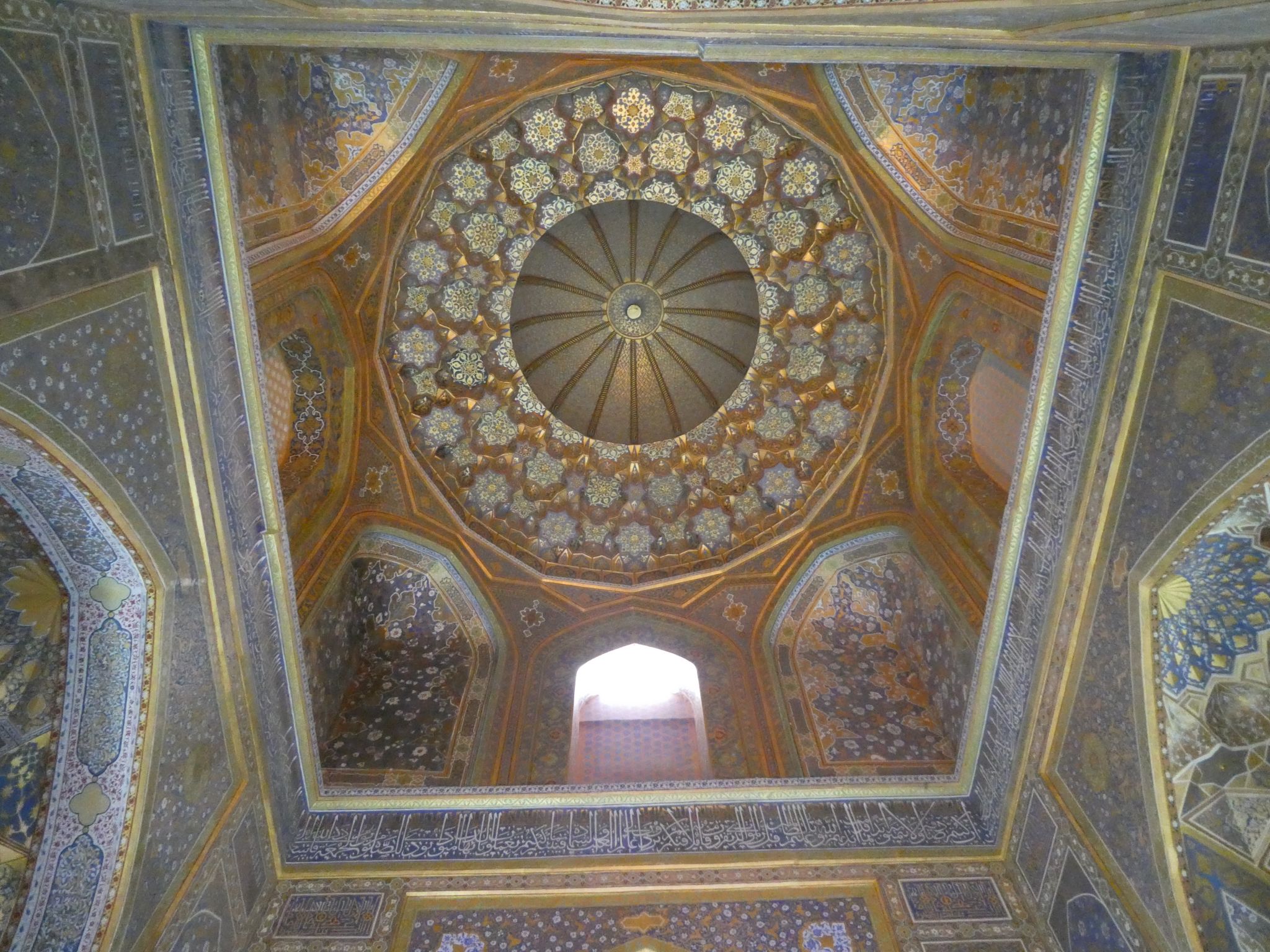 Despite his status as a tyrant, the Uzbekis appear to still hold Timur the Great in high esteem, and nowhere more so than in Samarkand which he made the capital of his empire. 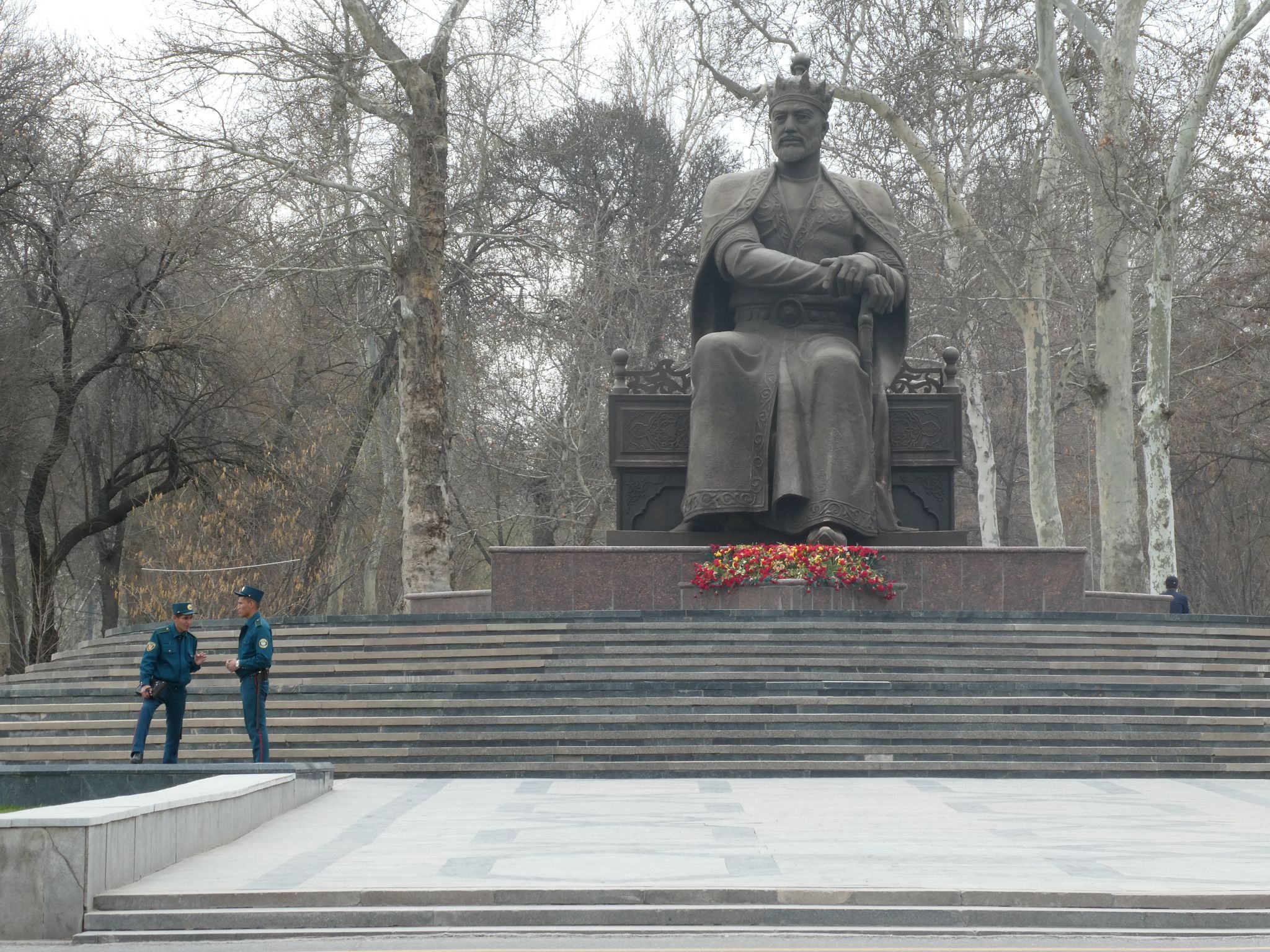 Nearby, the Gur-e-Amir Mausoleum contains Timur’s remains and those of a number of his descendants including grandson Ulegbeg. 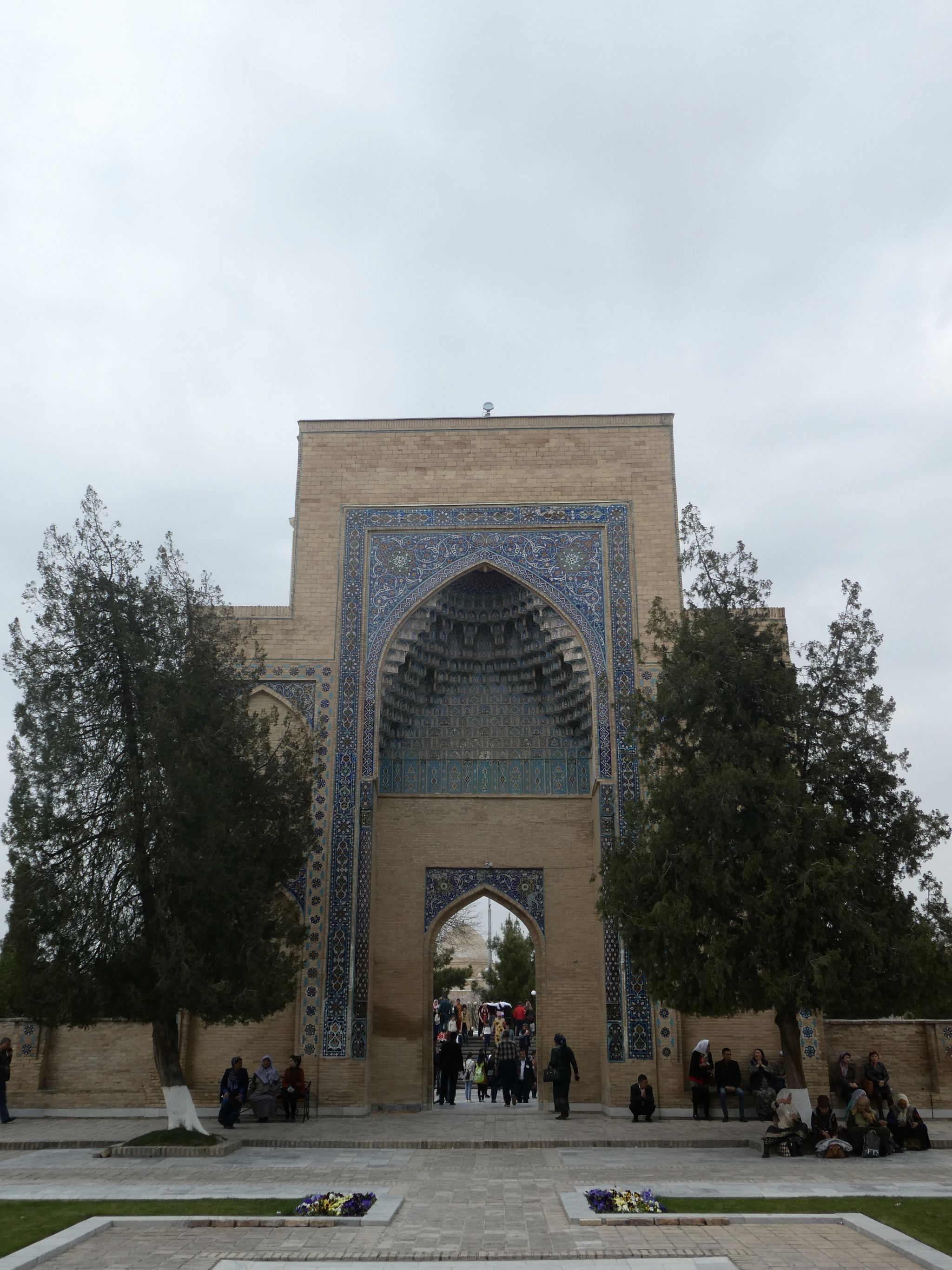 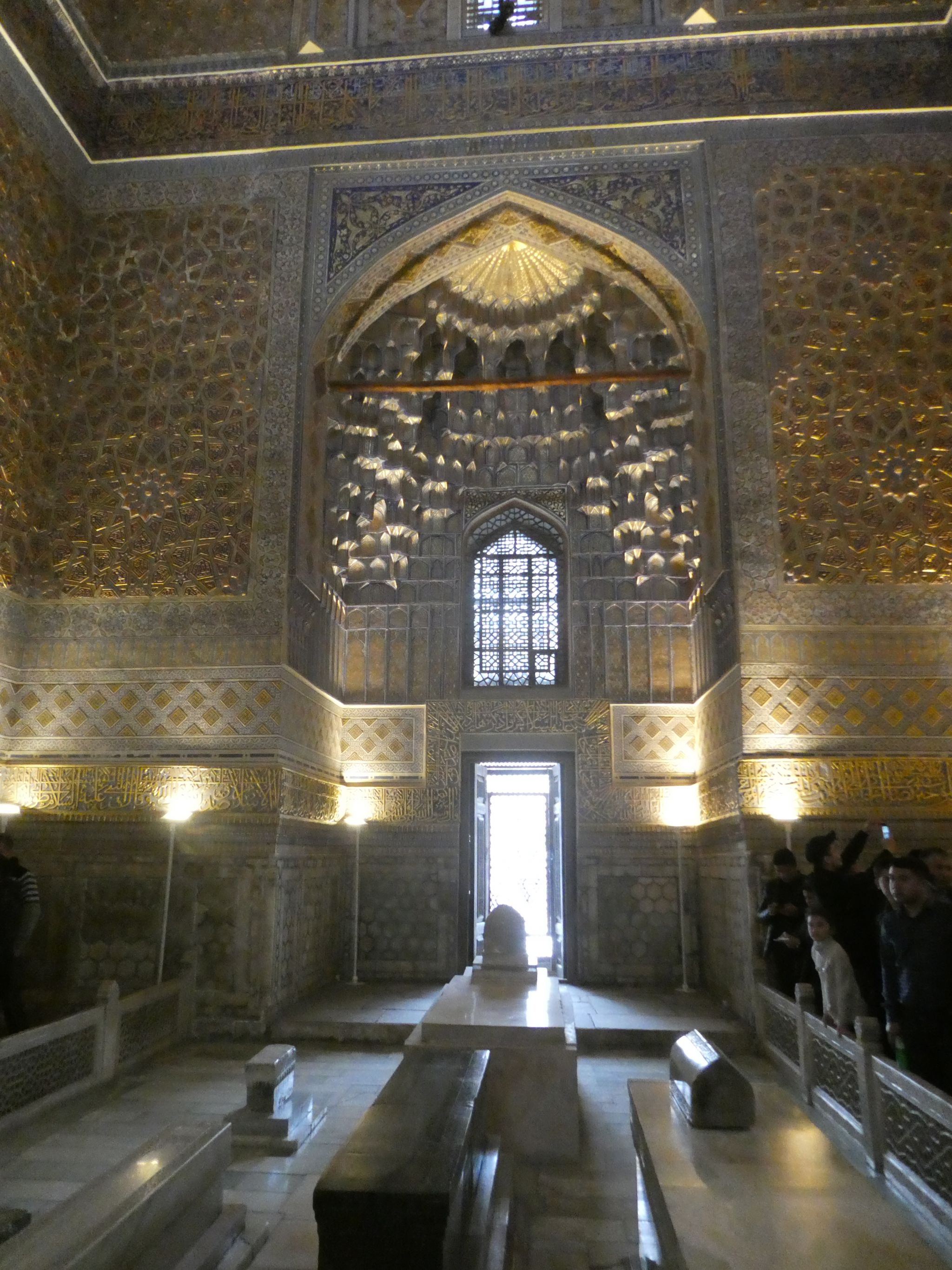 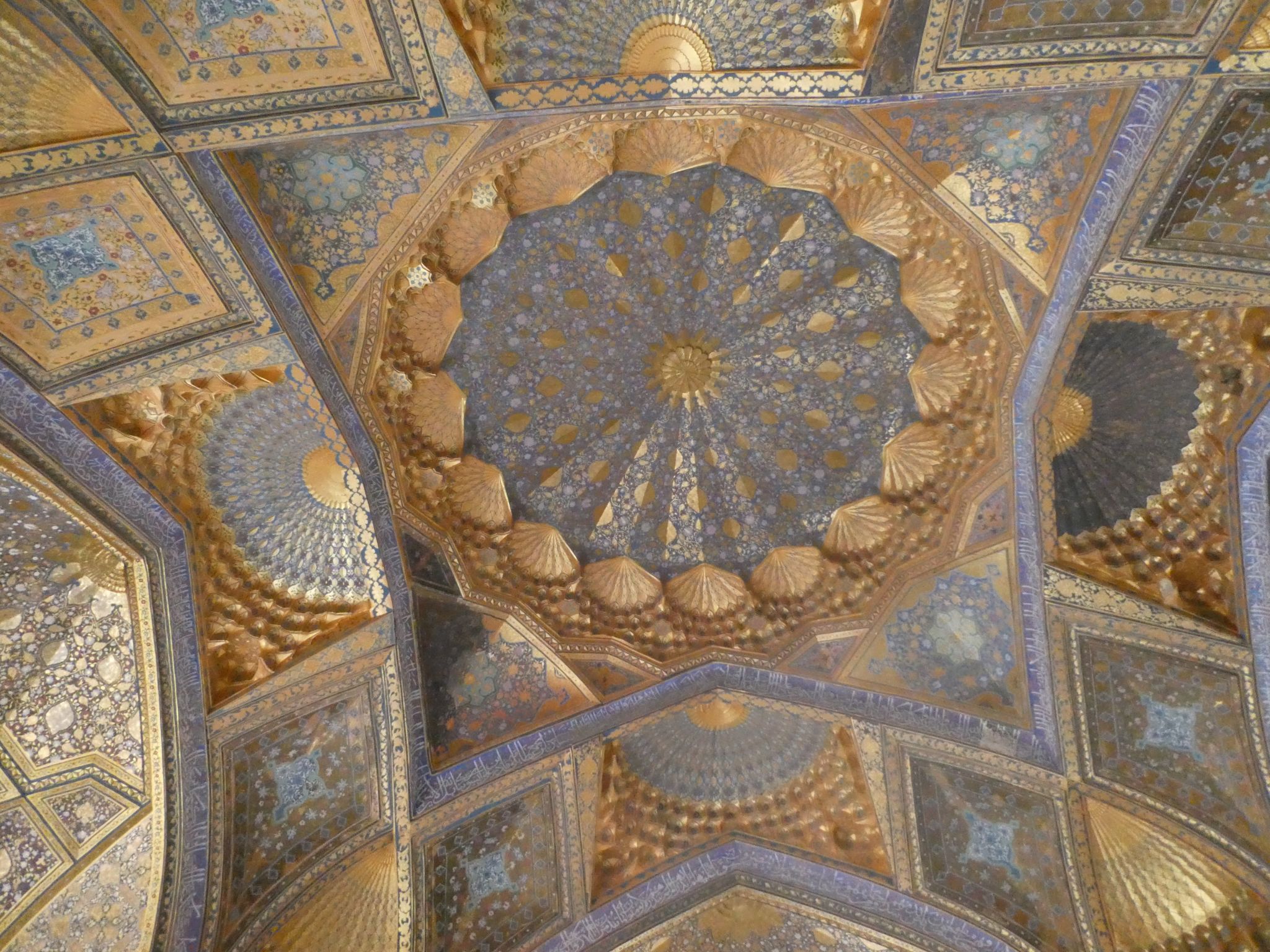 There is also the impressive Bibikhanum Mosque facing the equally impressive Bibikhanum Mausoleum across a forecourt.  At 41 metres in height, the mosque was once one of the tallest in the world and was cutting edge construction technology for the 1300s.  It took 95 elephants to bring the marble from Persia and the Caucasus.  It was damaged in an earthquake in the late 1800s and although it has been carefully restored, signs of that damage remain. 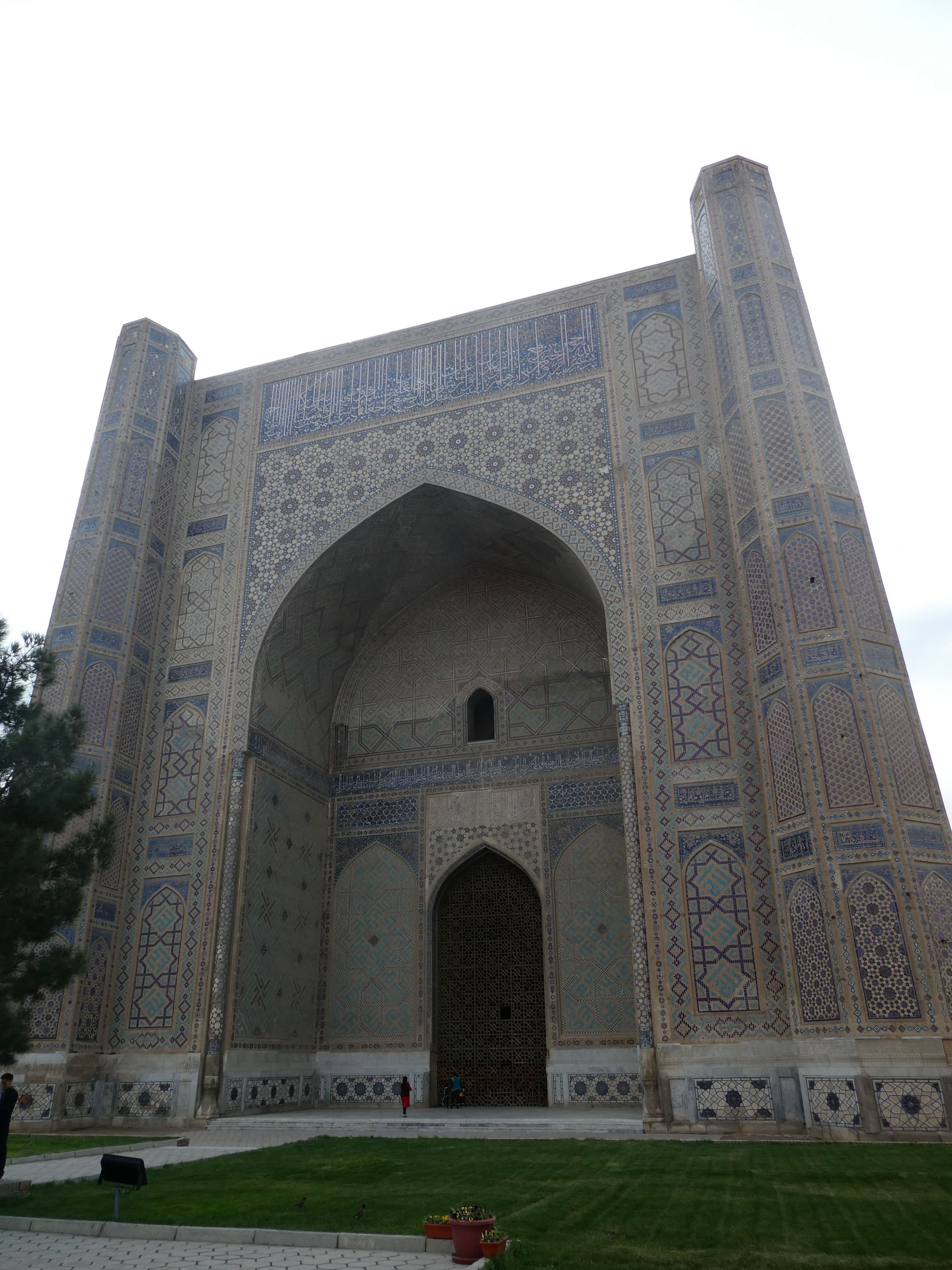 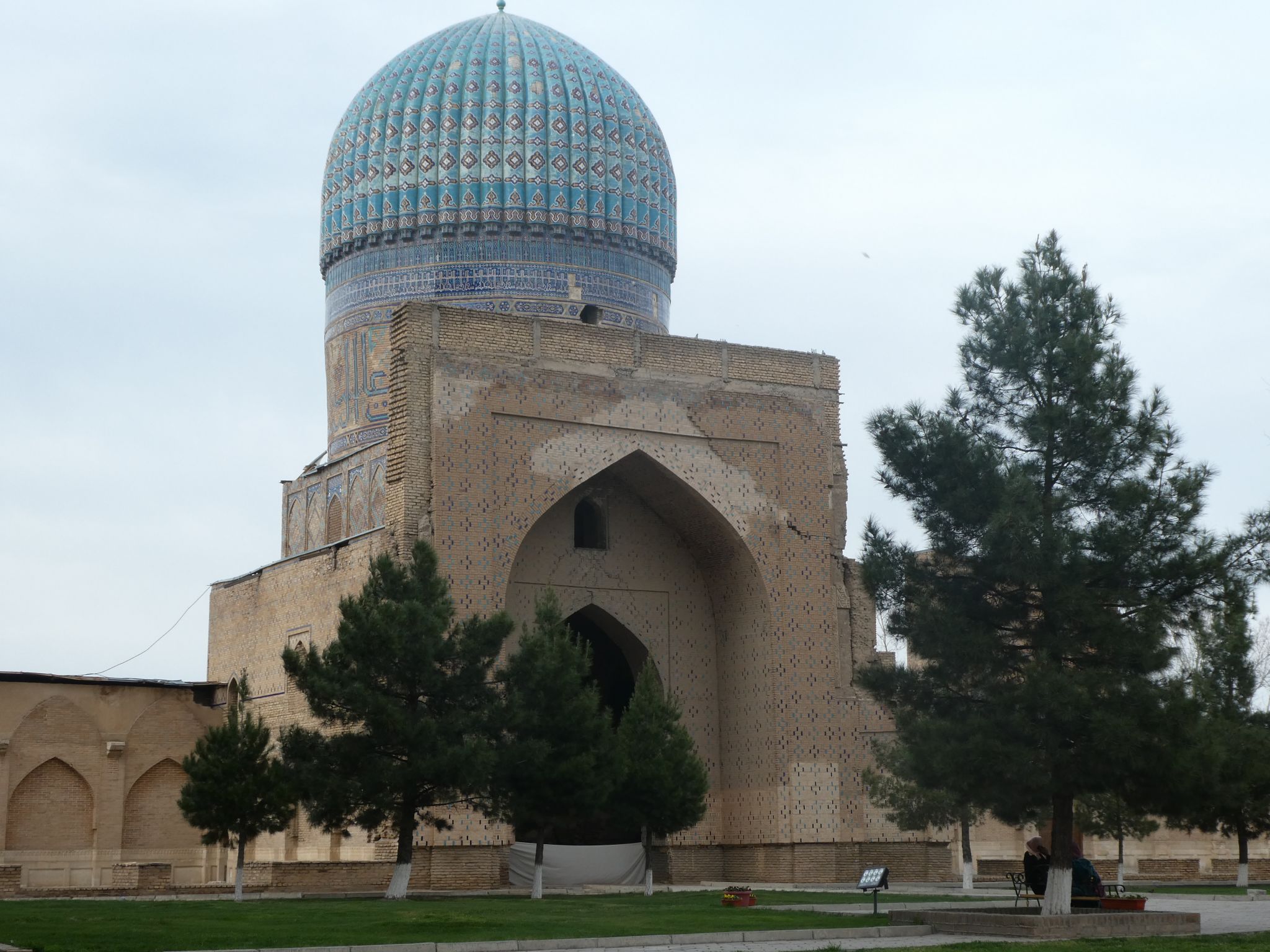 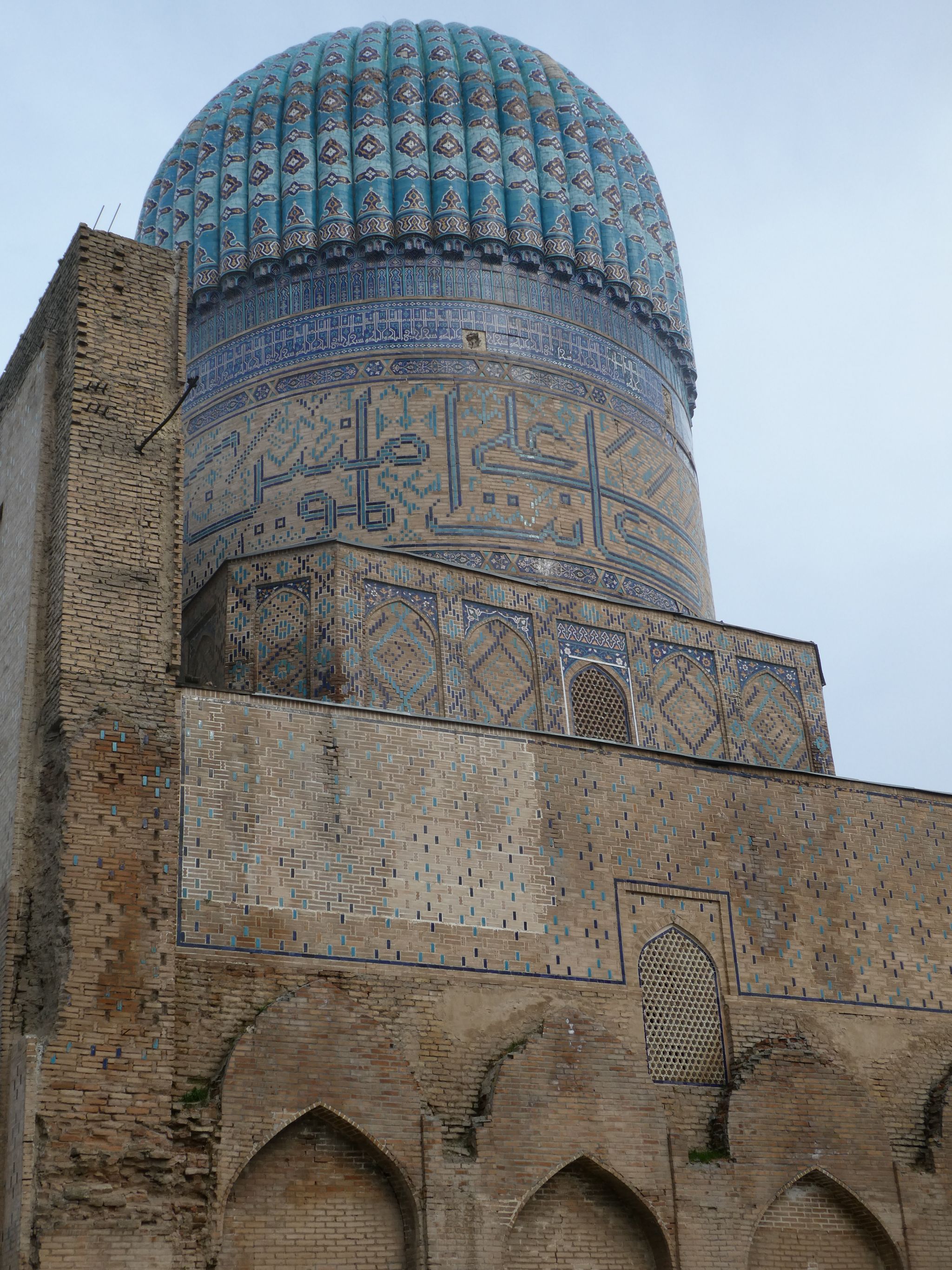 Again the interiors are remarkable. 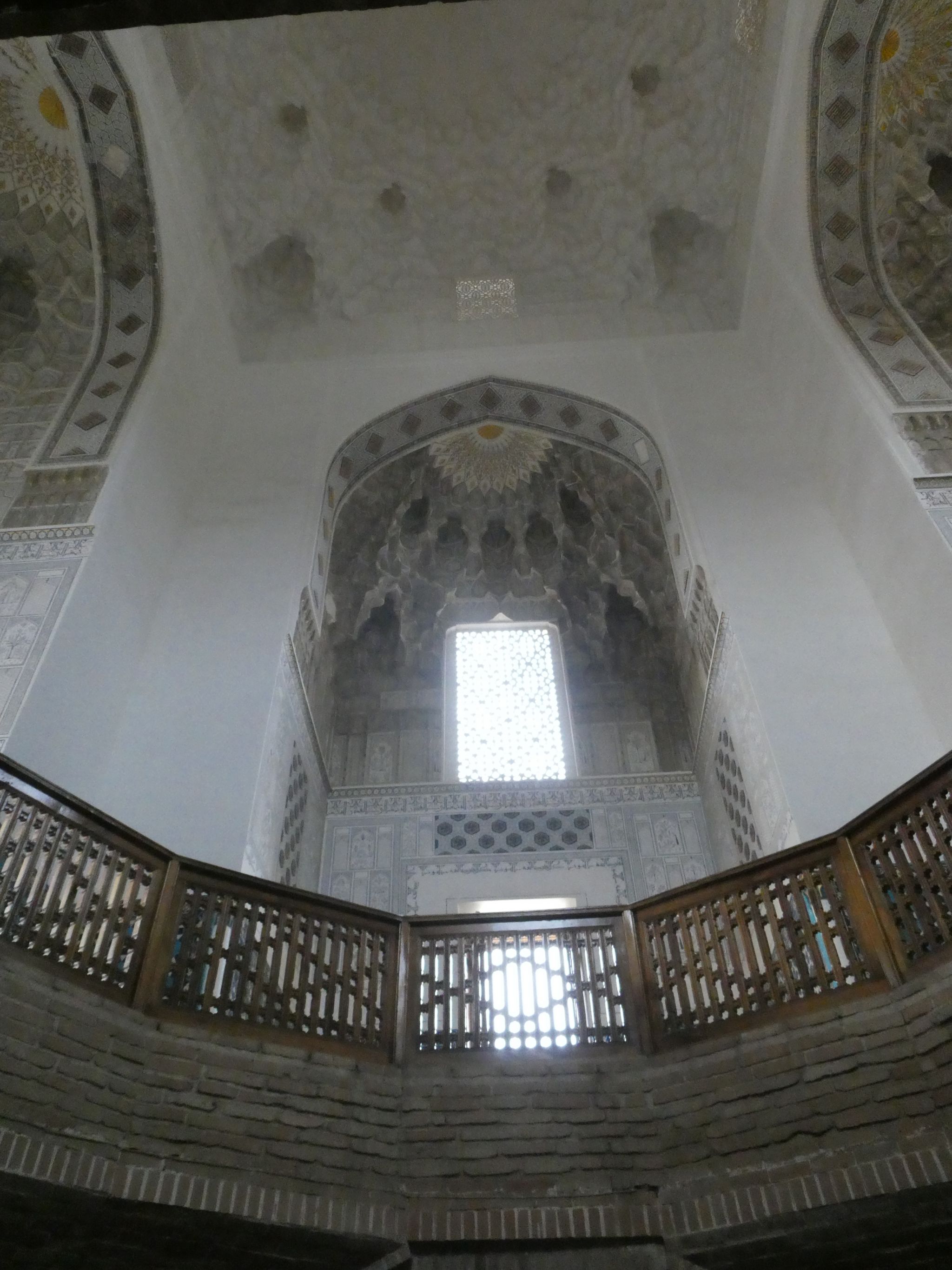 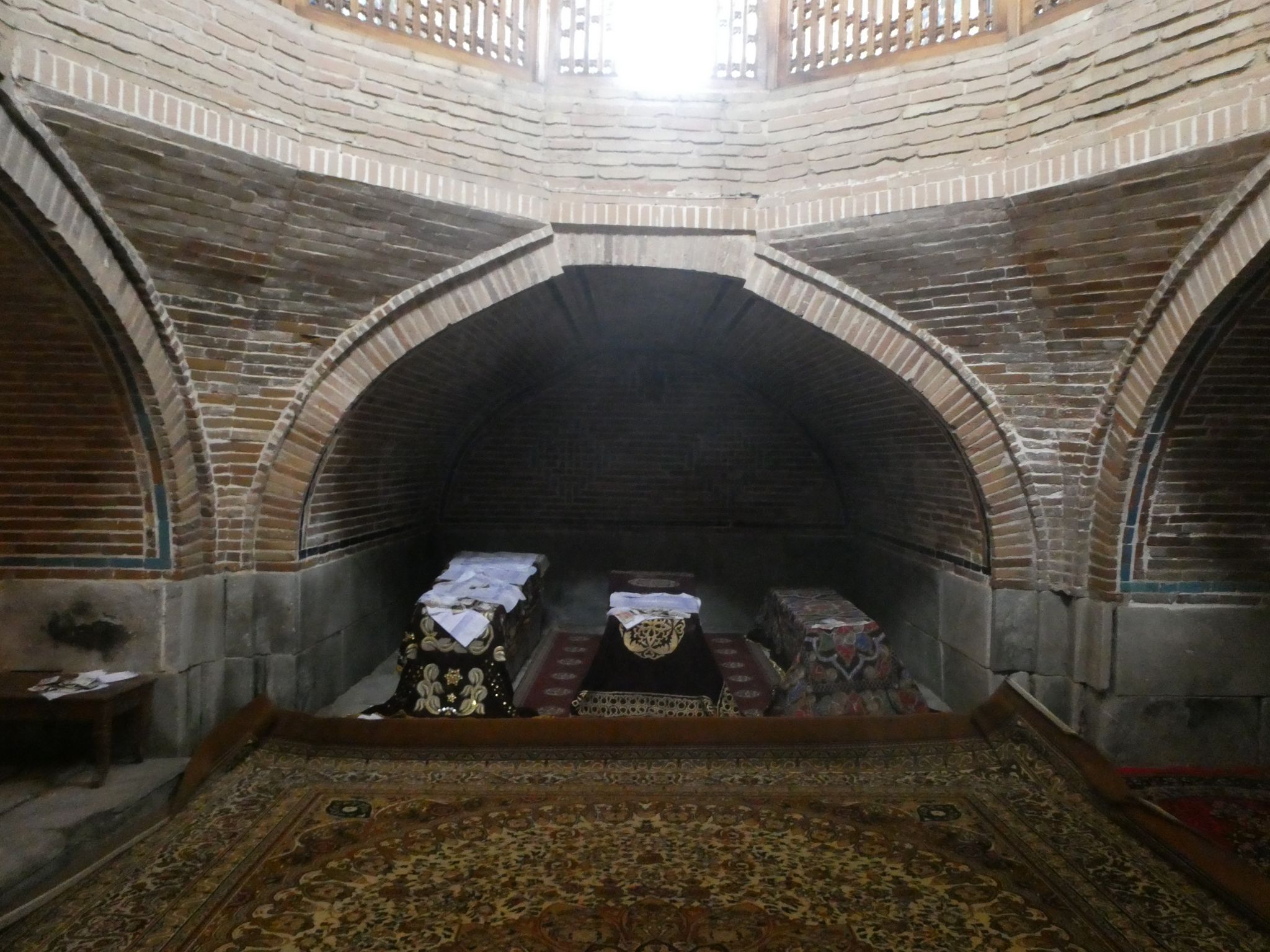 We stayed in a hotel which was practically bolted to the side of the Bibikhanum Mausoleum. 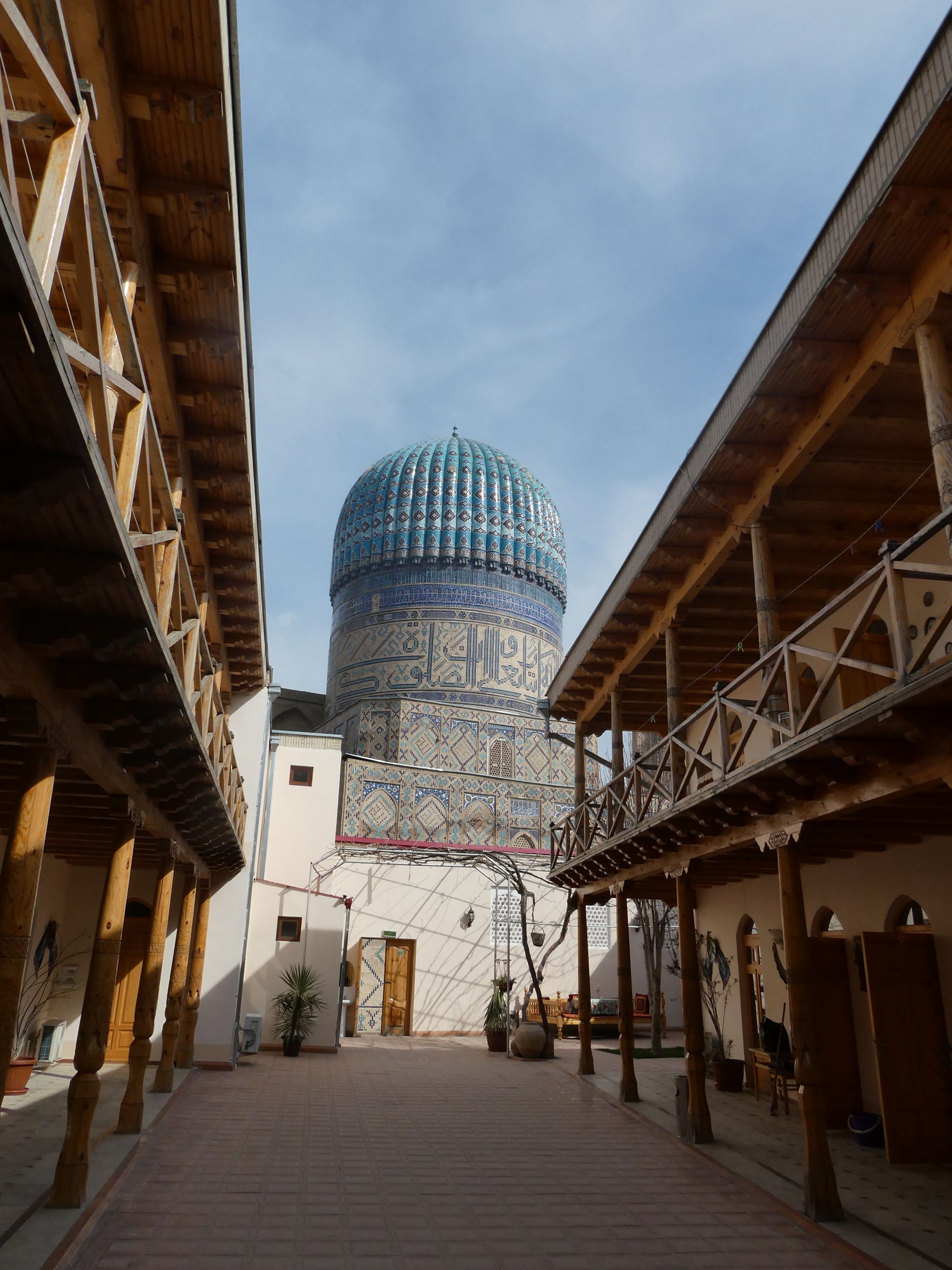 And just up the hill, it’s hard to believe the 8th century Hazrat Hirz Mosque was burned down and lay in ruin for almost 500 years.  It was meticulously restored by a wealthy private citizen from Bukhara in the 1990s. 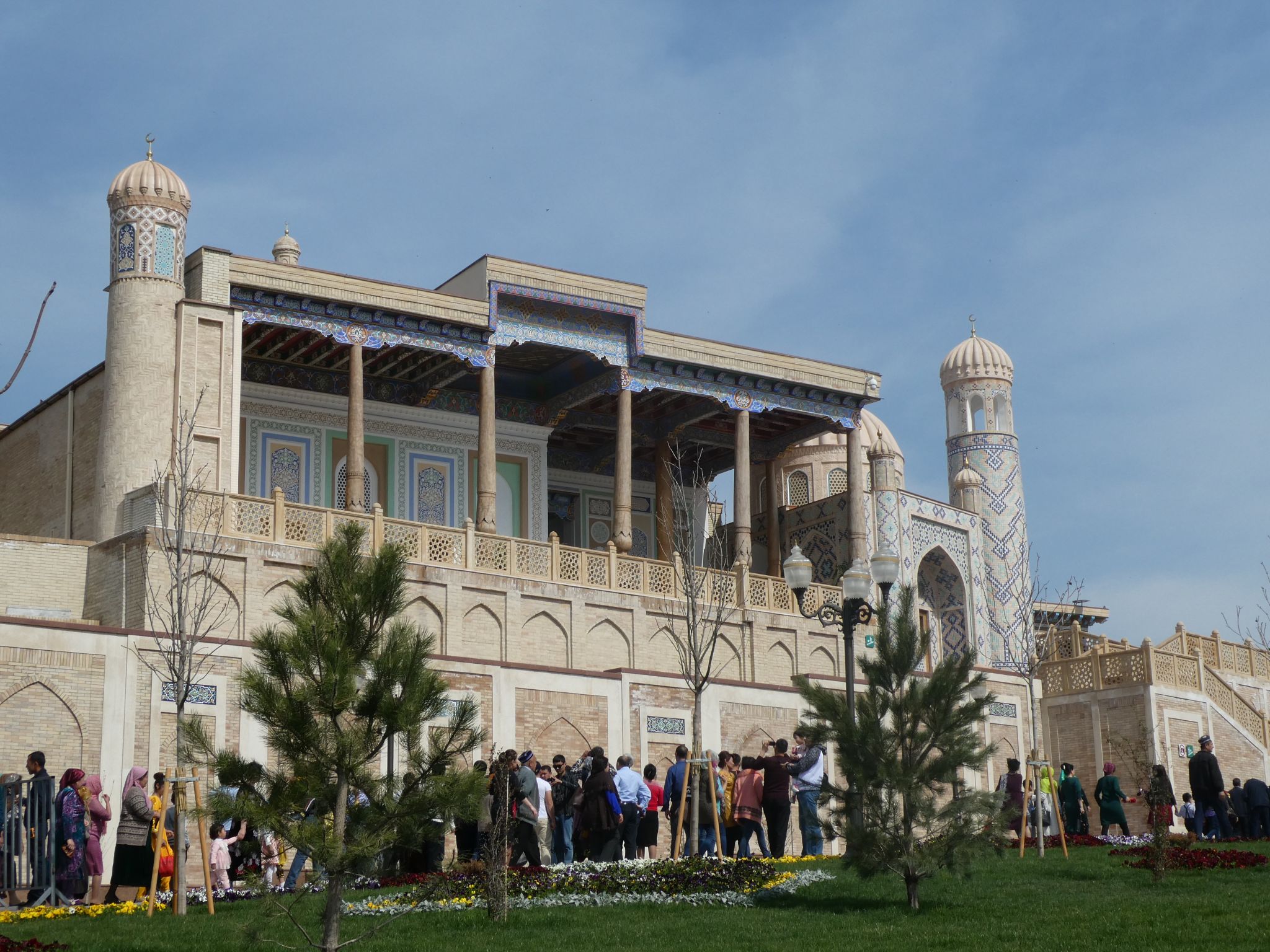 Perhaps most beautiful of all is the Shah-i-Zinda (‘Tomb of the Living King’) also know as the Avenue of Mausoleums.  The original mausoleum is thought to have been for a cousin of the Prophet Mohammed who is credited with bringing Islam to the area.  Later, Timur the Great and his grandson, Ulegbeg buried a number of members of their extended family here.  It remains a site of holy pilgrimage and was busy when we visited as it was Nowruz, local New Year and therefore a holiday. 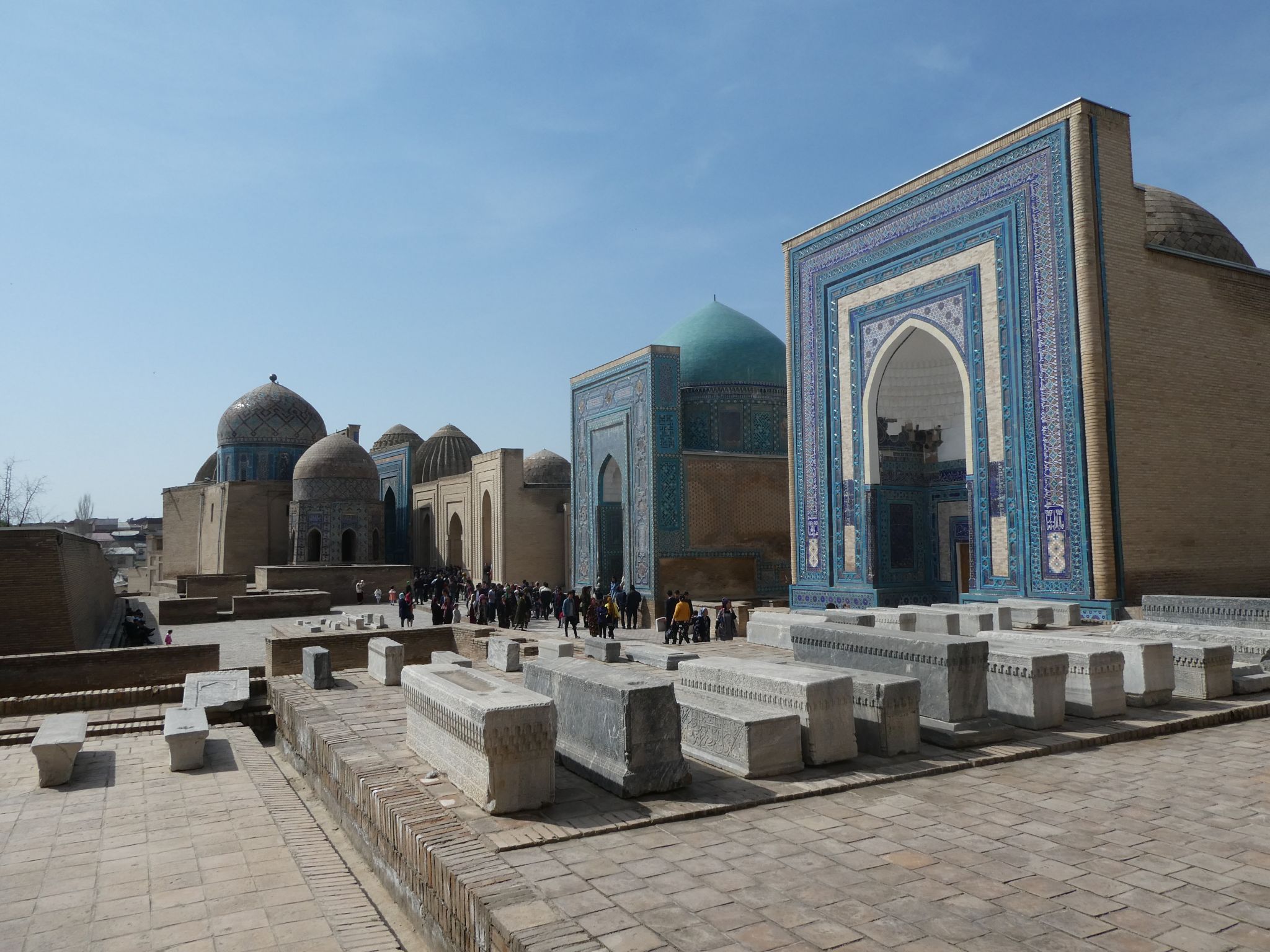 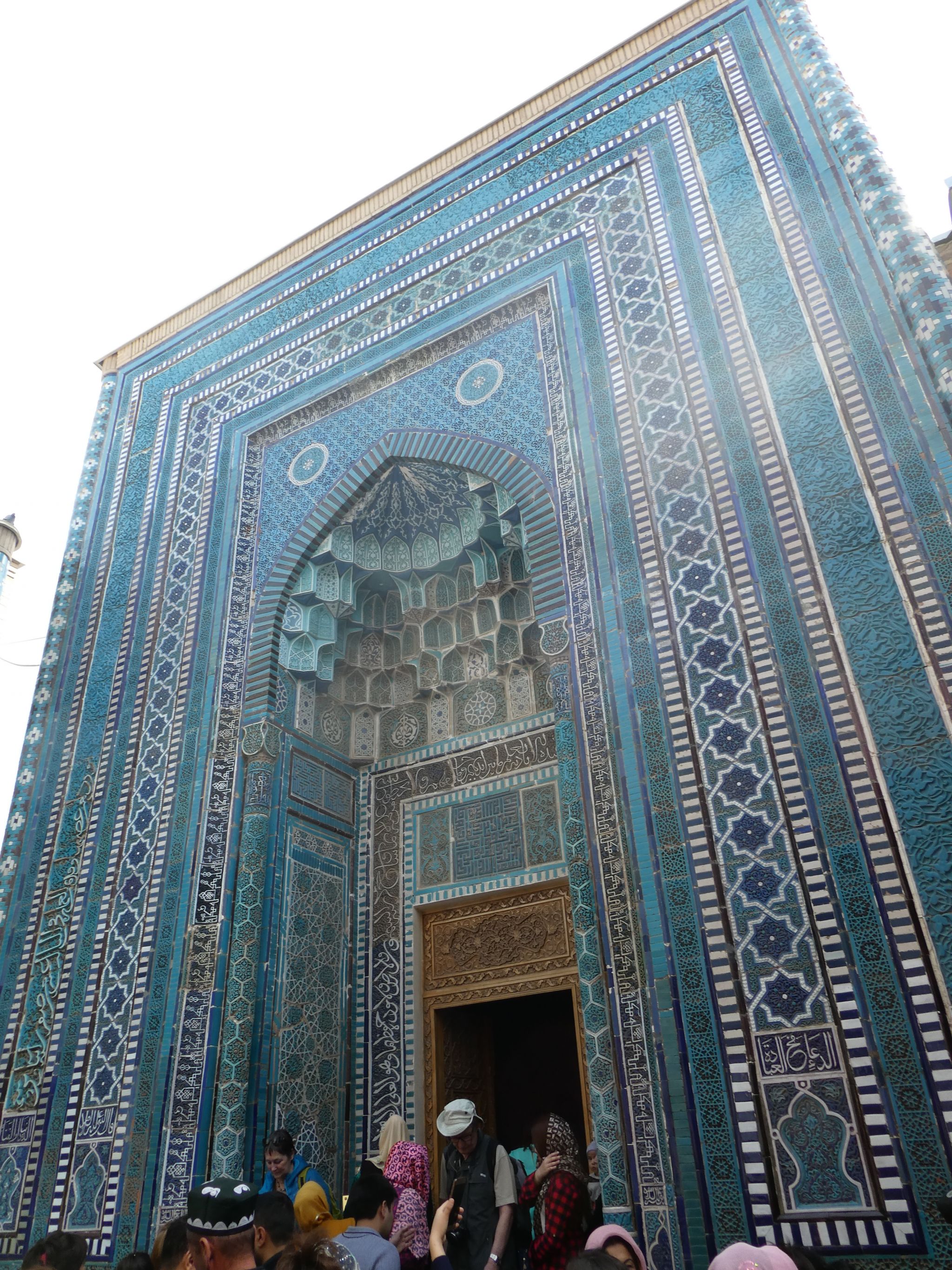 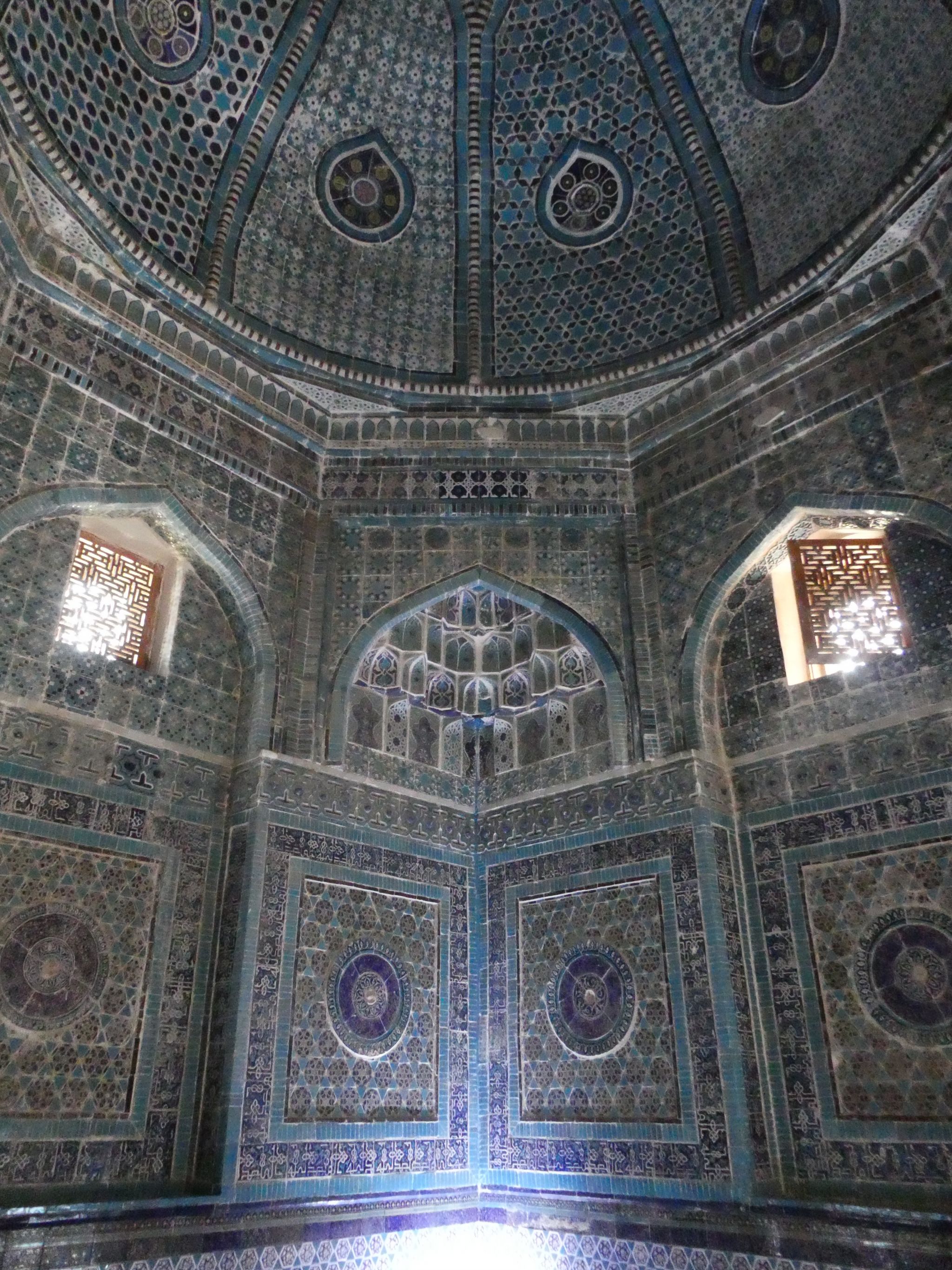 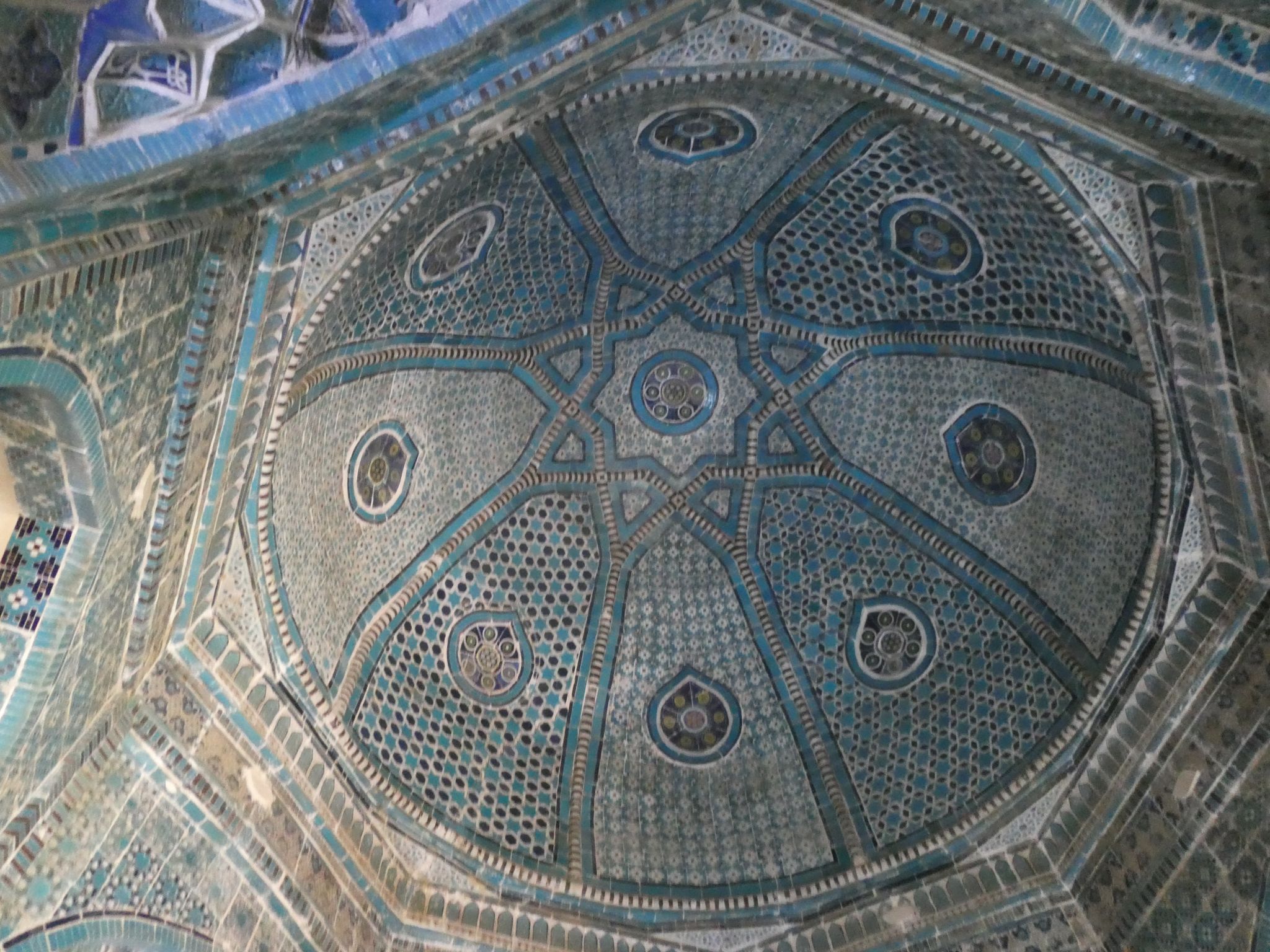 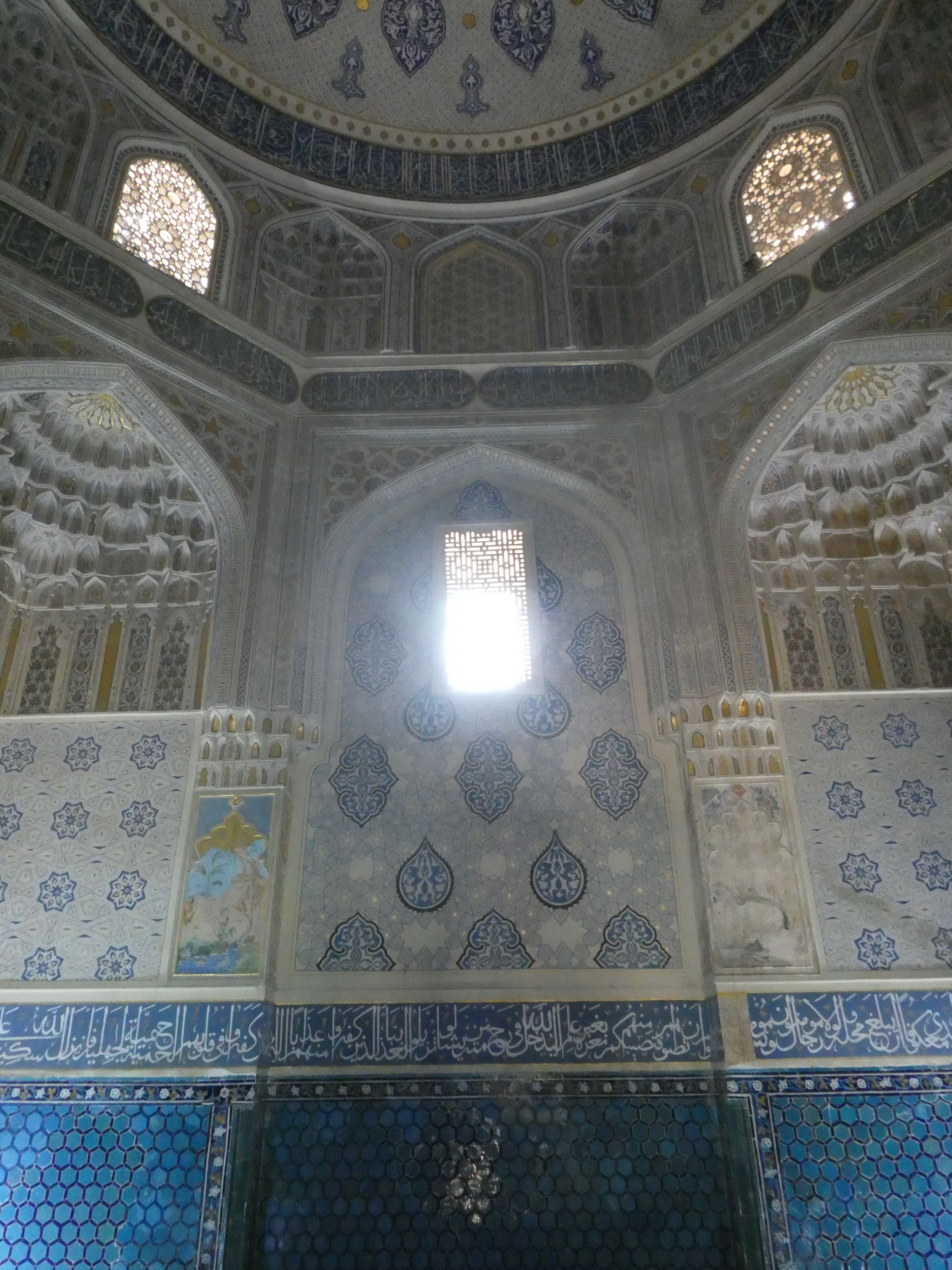 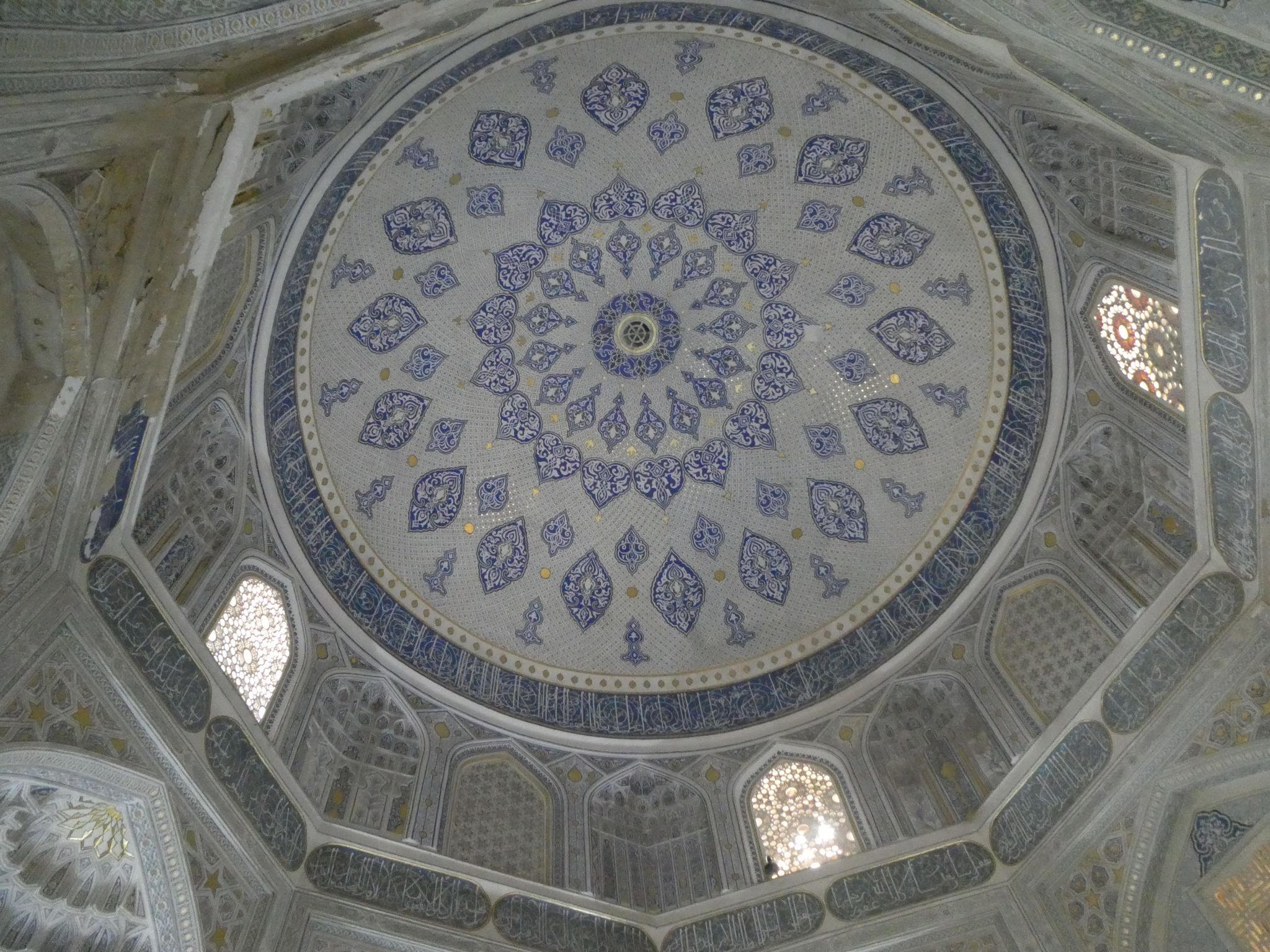 Just in case we were thinking the Christians have a monopoly on wacky saint miracles, Samarkand has the tomb of the Old Testament Prophet Daniel.  Allegedly his remains were brought to Samarkand by Timur in the 13th century from Iran (although Iran also claims to have him) and placed in a tomb here. 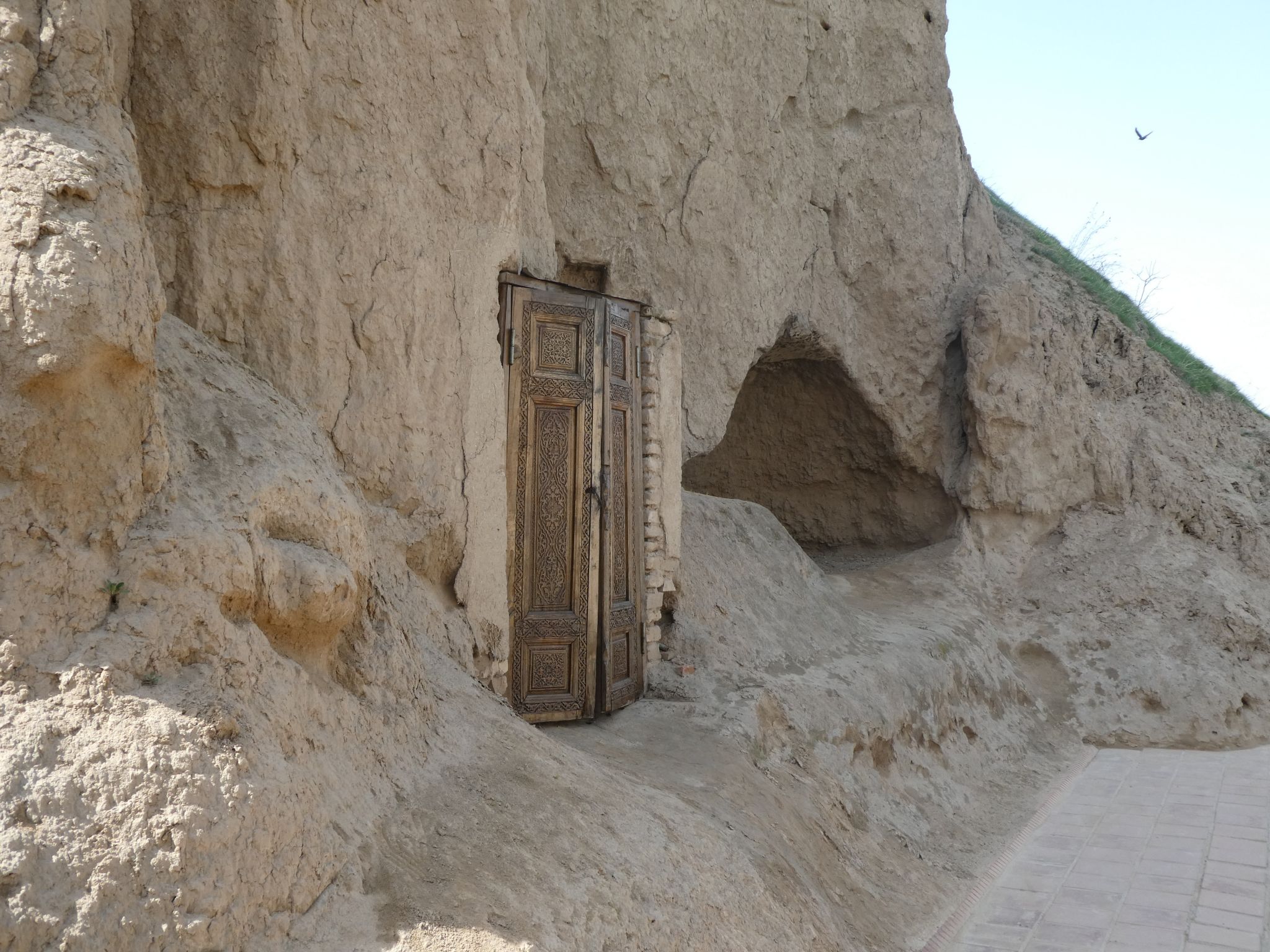 However he had to be moved and is now in a sarcophagus which is 18 metres long, housed in a purpose built mausoleum – because he grows half an inch longer every year.  After all these years, that’s a very long dude.