From Khiva we returned to Urgench and caught a train to Nukus for a trip out to the Aral Sea, or what is left of it.

The Aral Sea is not a sea.  It is a lake.   A lake is enclosed by land whereas a sea is connected to the open ocean.  That’s important in understanding the environmental catastrophe that has been imposed on the Aral Sea.

The Aral Sea lies on the border of Uzbekistan and Kazakhstan.  Until the late 1970s, it was the fourth largest lake in the world (after the Caspian Sea – also not a sea but a lake, Lake Superior and Lake Victoria).  It was a very productive fishery, netting about  25,000 tonnes of fish per year, supporting a large fishing fleet and numerous towns, fish canning factories etc.

However from the 1960s the Soviets re-directed one of the two rivers that fed it, to support cotton farming in Kazakhstan.  As the lake then had less water flowing into it  than is evaporated naturally, the sea commenced to shrink.  It has shrunk from 66,000 square kms in 1980 to just 12,000 square kms in 2000 and it continues to contract.  The current water volume is 1/10th of previous and so densely saline the only thing now capable of living in it is some primitive worm.
This destroyed the fishing industry and associated economic activities of the Aral Sea, but irrigation from the diverted river did result in the conversion of some five million acres of desert in Kazakhstan into productive cotton farmland.  So whether the diversion of water was “one of the planet’s greatest environmental disasters” as stated by United Nations Secretary General Ban Ki-Moon in 2010 or an efficient use of water resources probably depends on whether you are an Uzbeki fisherman/fish cannery worker or a Kazakh cotton farmer.
Either way, the damage to the Uzbeki side really has to be seen to be believed.
We had a car and driver to take us out to see where the sea used to be.  It is now a vast expanse of desert.  We got bogged and had to be towed out. 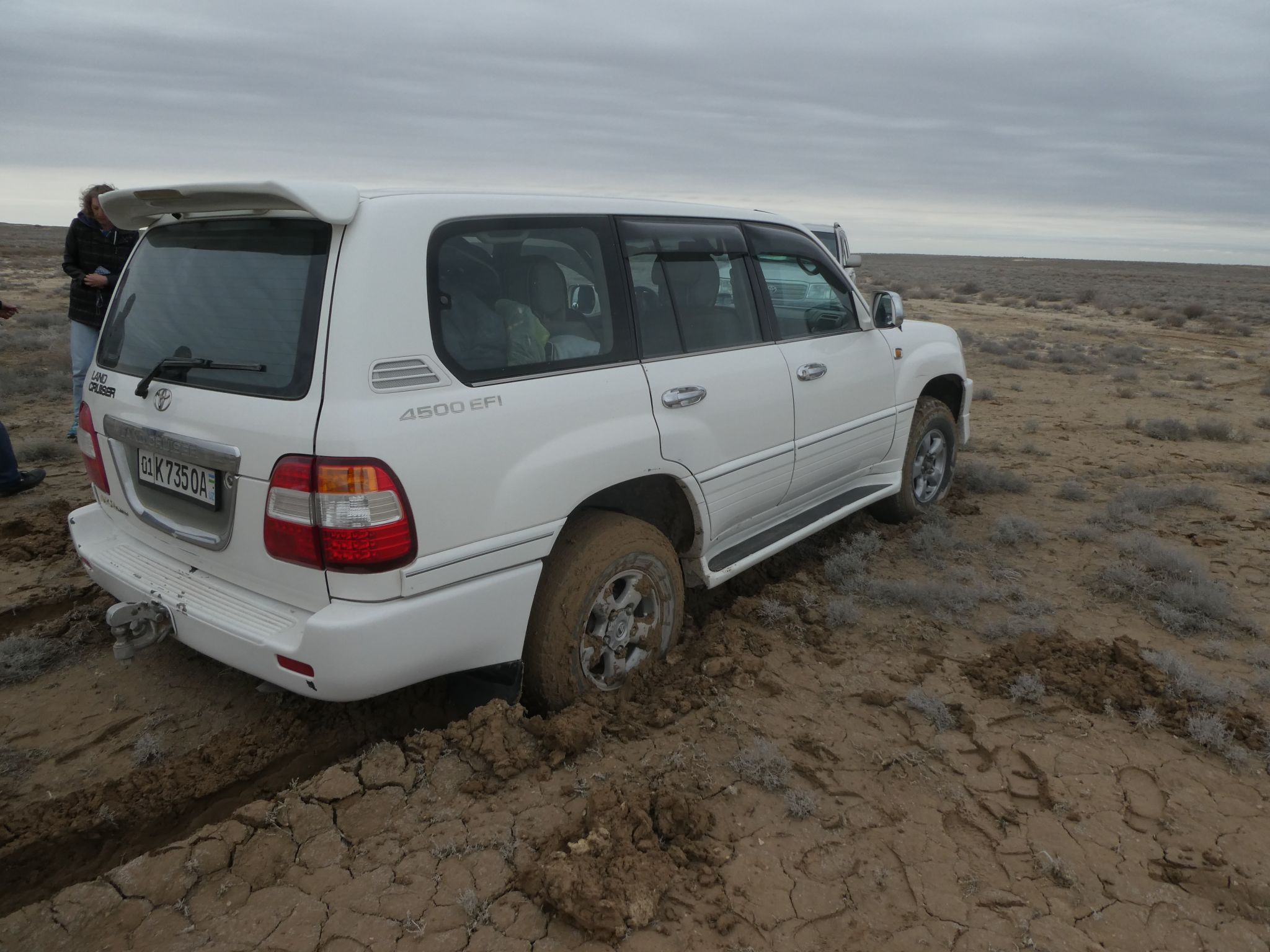 We camped in a yurt on the edge of a canyon which is now miles from the current shoreline. 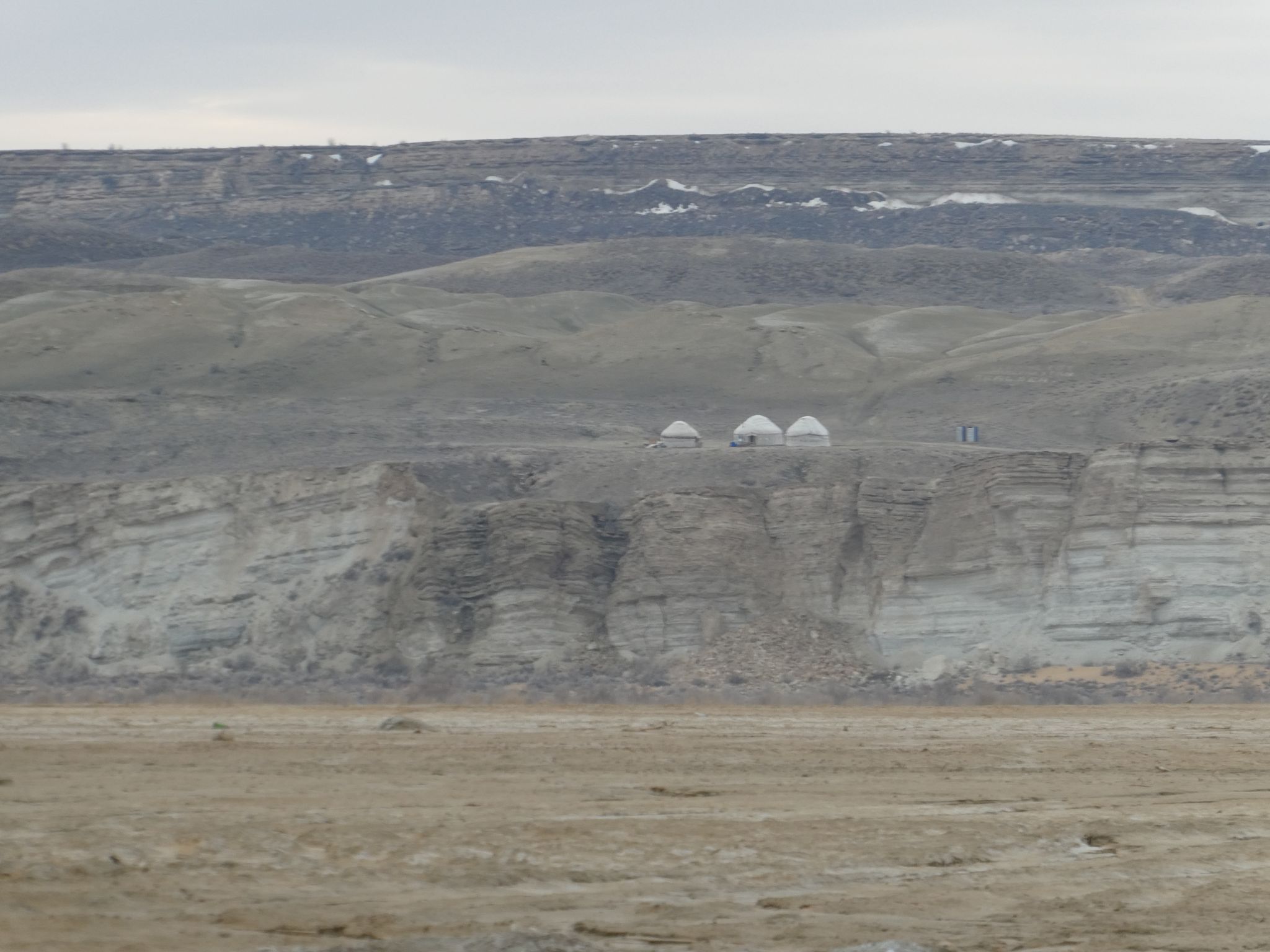 We watched the guys build a new one from a basic frame to finished product in a few hours. 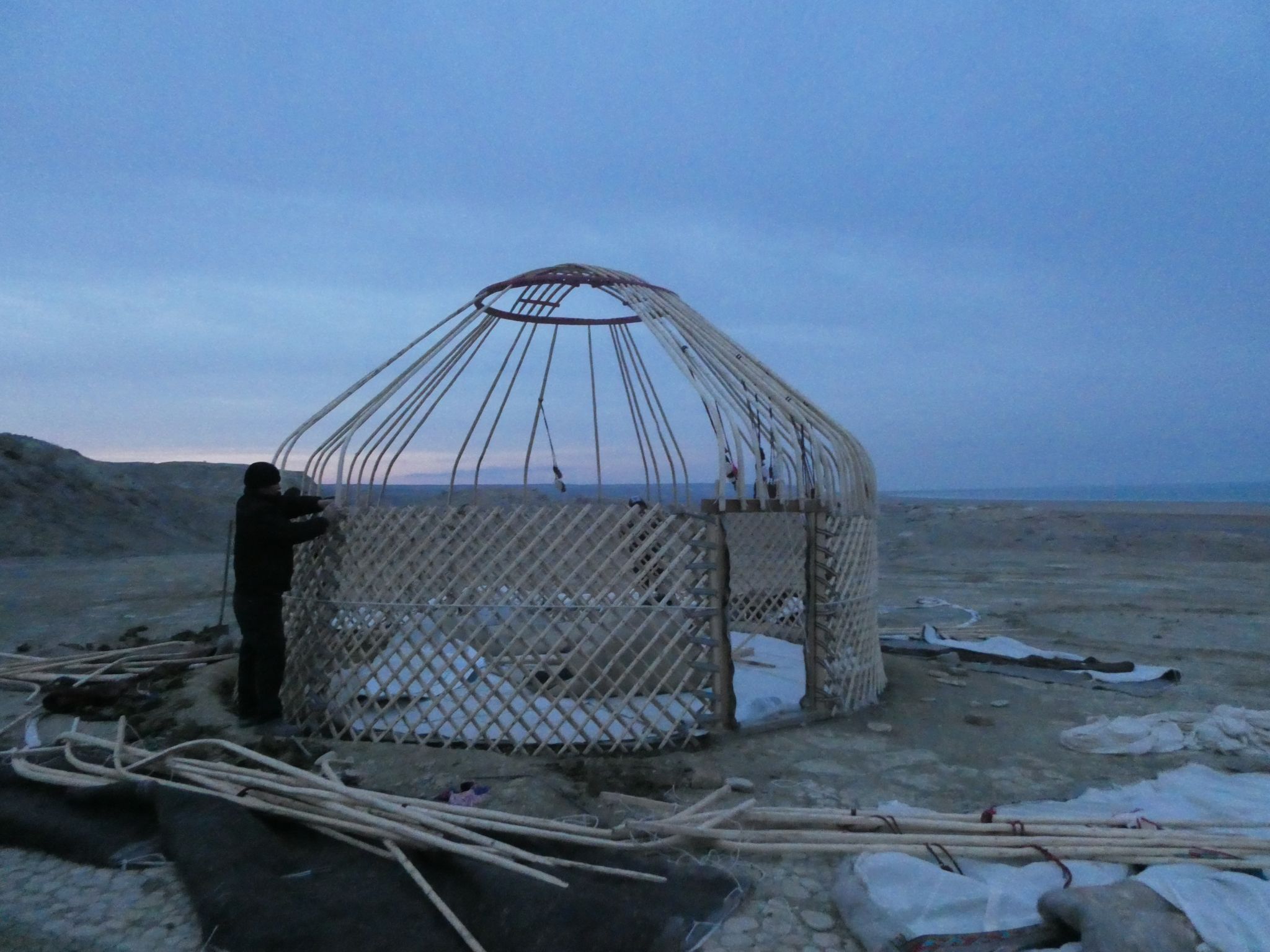 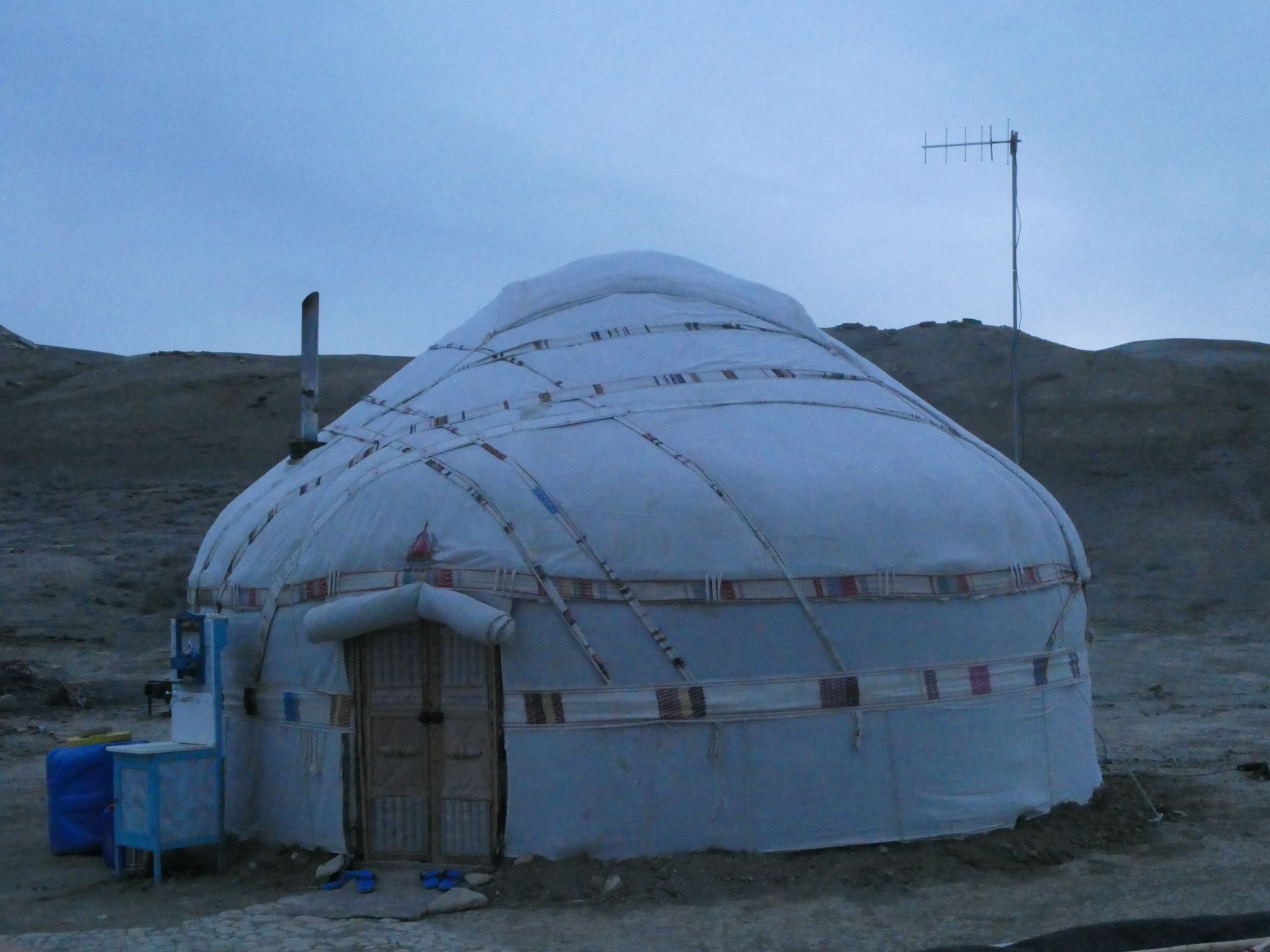 Next day we drove for hours over desert that used to be the sea bed.  The scale has to be experienced to be understood.  There is just nothing there.
Eventually we reached the Cemetery of Ships.  When the sea contracted and increasing salinity killed all aquatic life, the fishing industry was destroyed and the fleet was abandoned.  Many boats were stripped for metal, but a number remain, marooned in the sand in the middle of a desert. 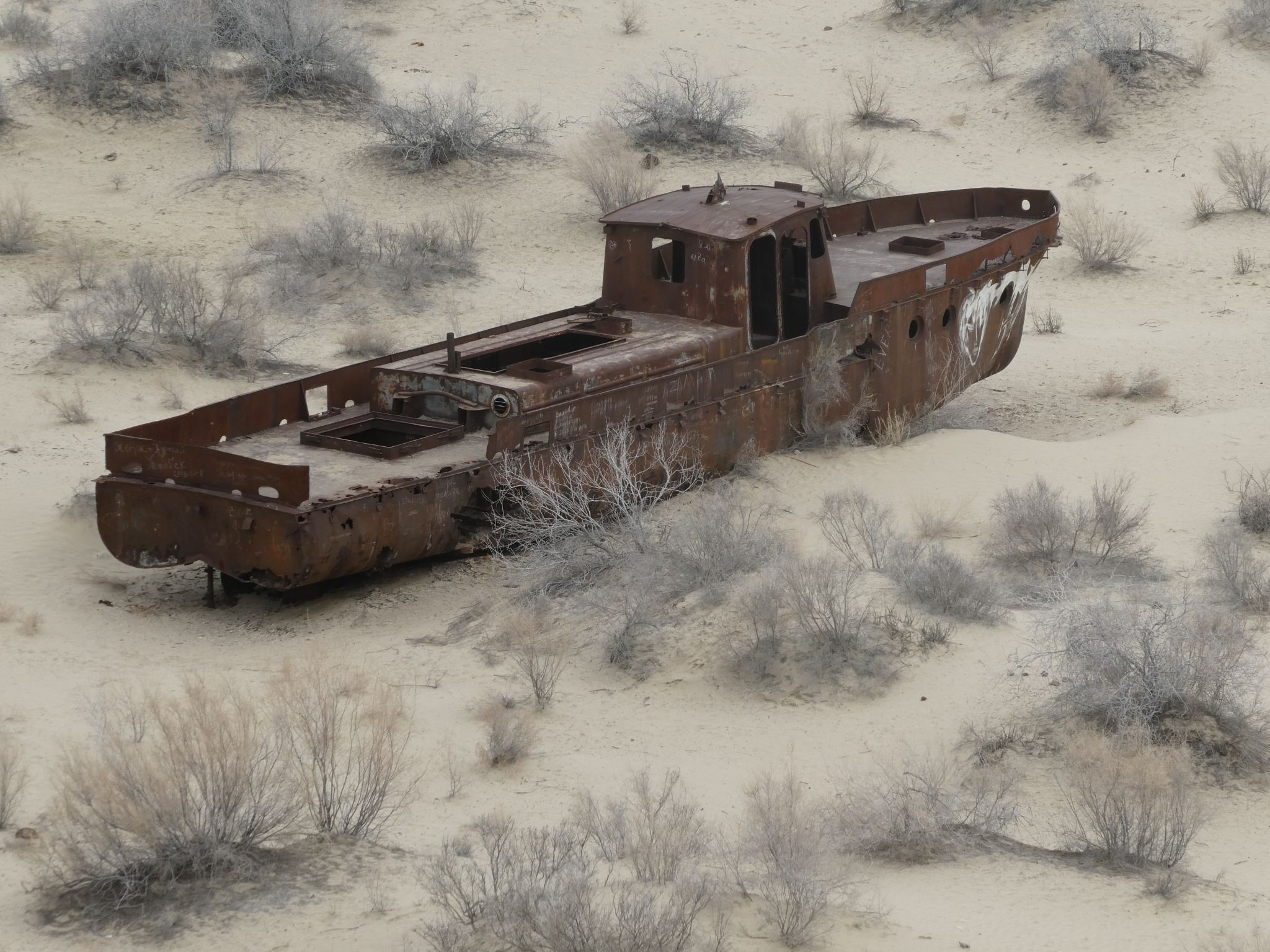 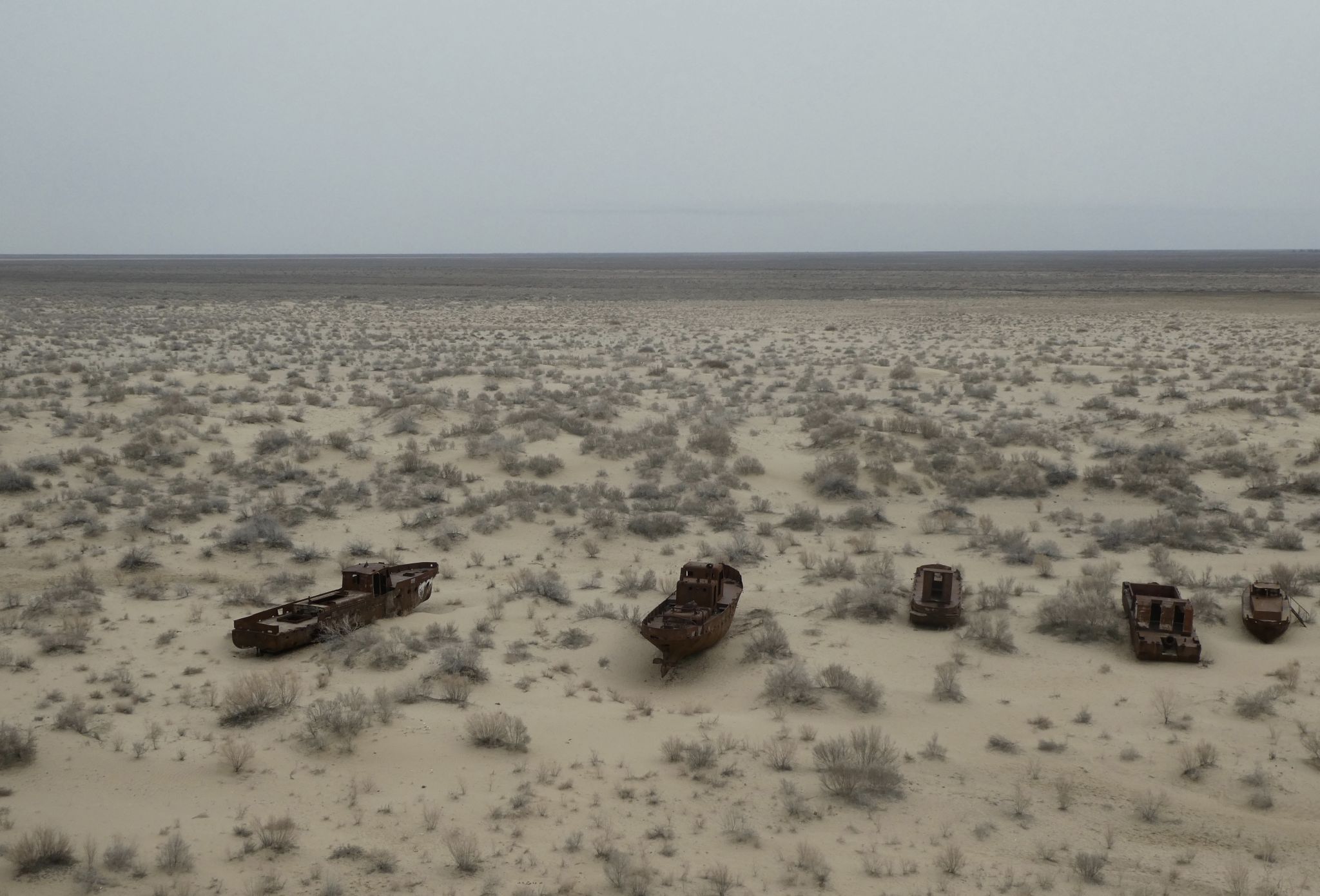 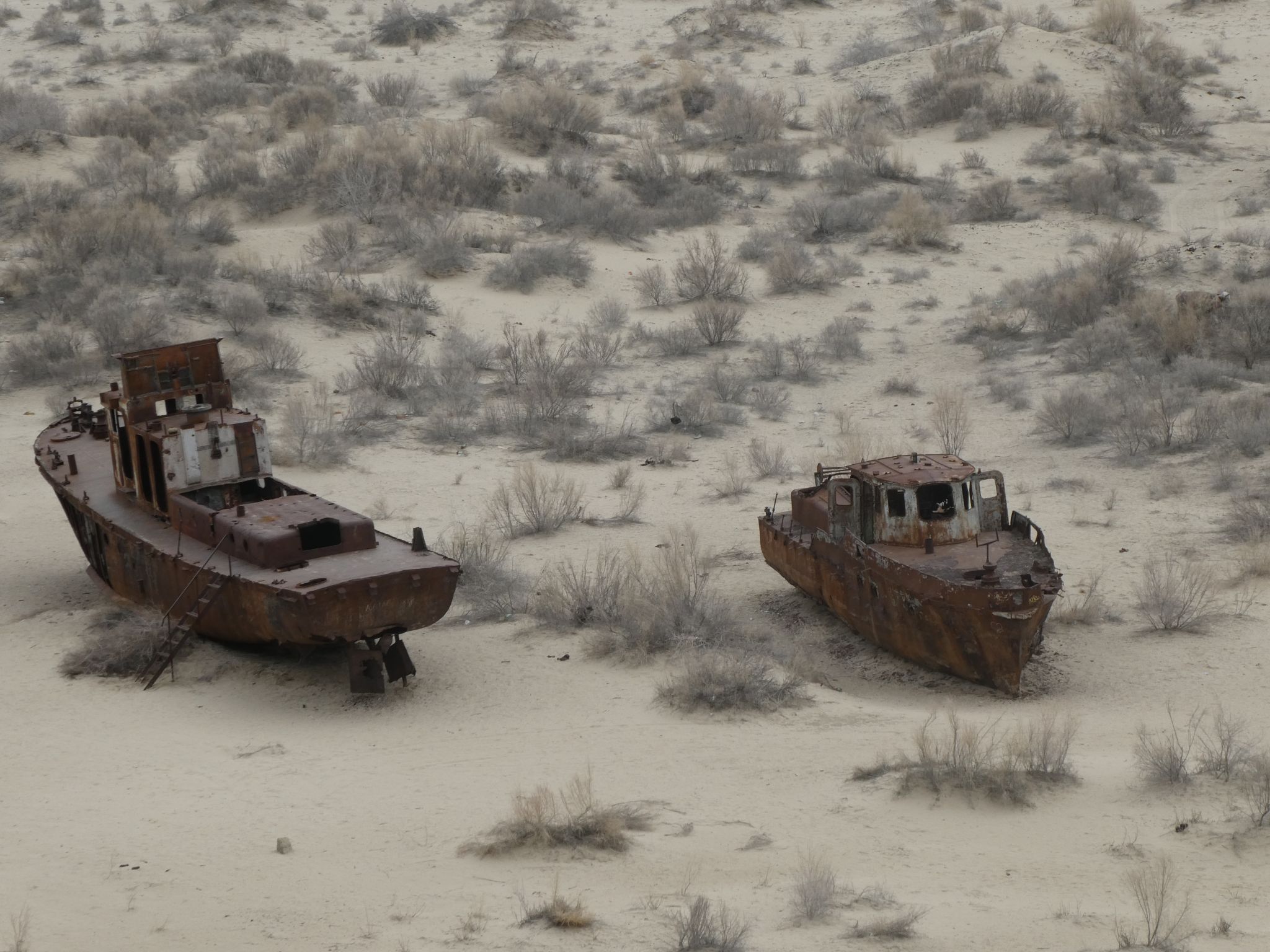 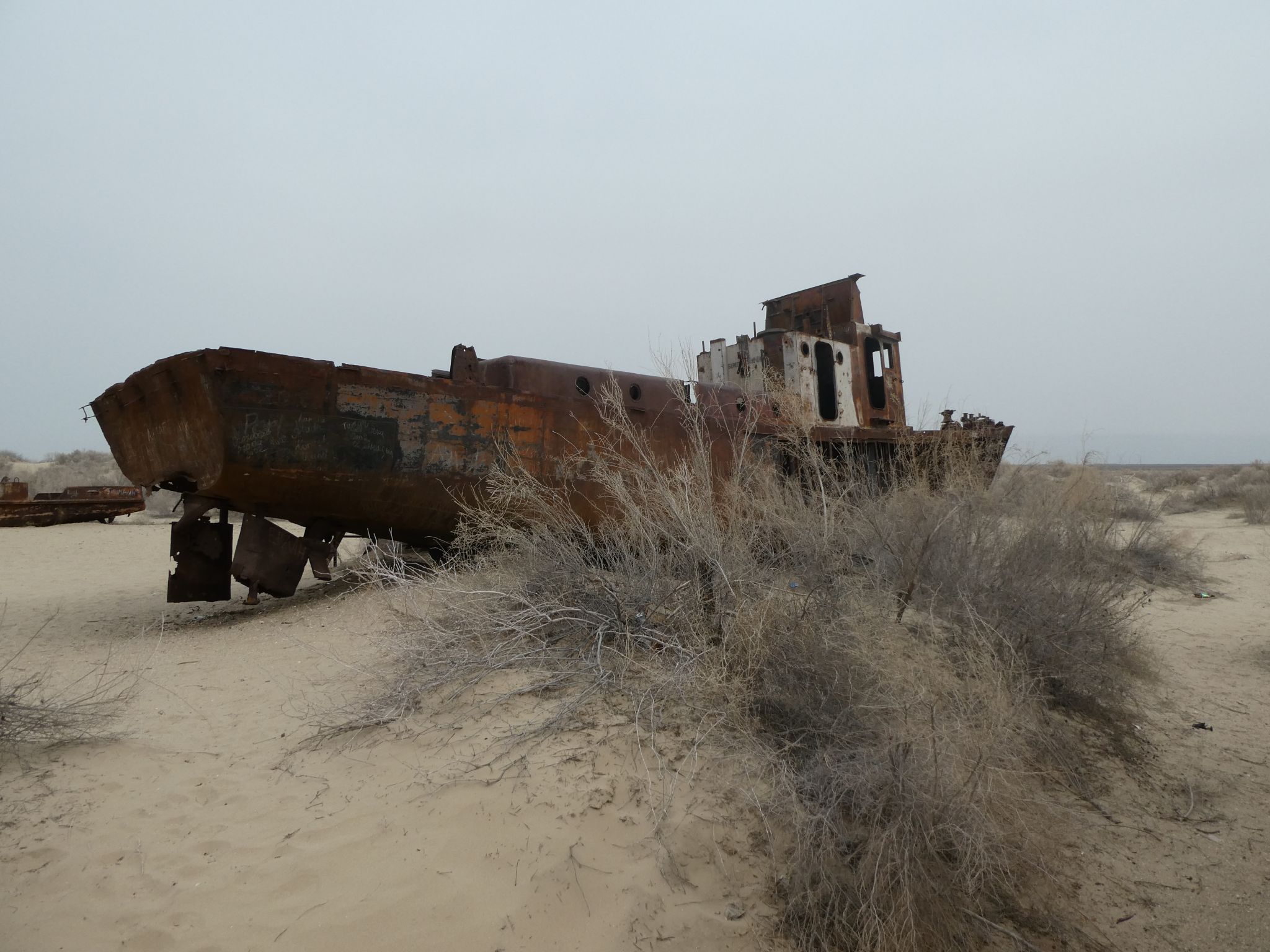 We then headed to the Turkmenistan border, and that was a whole new challenge.