We exited the border control building into Turkmenistan and walked the one kilometre to the end of the controlled area where our driver and guide were waiting.

The differences between Uzbekistan and Turkmenistan aren’t obvious and dramatic such as for instance between Laos and Thailand.  It has been about 20 years since our visit, but when we came across the Friendship Bridge from the Vientiane side back to Thailand back then, we could see all around us that we were stepping forward about 50 years in time.

Here, there were no obvious physical differences, except that in Turkmenistan it is irrigated in places.  Beyond that the landscape is similarly barren.

The roads are demonstrably worse.  Actually, Turkmenistan’s roads were shocking.  We are talking a slightly-better-than Madagascar goat track.  Our vehicle was a fairly late model 4wd, which is all that kept our kidneys intact on the more than five hour drive to the gas crater.

Because of the delay at the border and the crappy road it was nearly midnight by the time we arrived at the gas crater.  As we approached it we could see the glow from a couple of kilometres away.

A bit of background:  The gas crater came into being as a result of some typically Soviet style resource management.  Back when Russia ran the place and was happily expropriating the country’s resources, a decision was made to plonk a gas rig on what turned out to be a fairly sizeable cavern.  That seemed to work OK for a short while, until gravity noticed what was going on and promptly collapsed the whole thing.  What was left was a hole about the length of a football field across which was leaking gas.

At this point, nowadays in the West, we would have an inquiry which would cost a gazillion dollars, which would produce a report recommending a further gazillion dollars be spent trying to fix it.  But that wasn’t the Soviet way.  Instead some bright spark (if you will pardon the pun) decided that if it was ignited,  the gas would burn off in a couple of weeks.

Good plan. Except this happened in 1971 and 47 years later, it is still burning.

We are guessing the guy who came up with that plan spent the rest of his life in a Siberian gulag.  Or maybe they just left him in Turkmenistan.

As to who drew the short straw to actually light it, John has a mental picture of poor young Boris the Apprentice, balanced on the edge of the hole with a packet of Redheads, wondering how far back he should stand to make sure his eyebrows don’t get singed.  That might however reflect John’s own experiences as an apprentice at around about the same time.

Anyway, that is the background.  And now?

It is freaking awesome.

Imagine a slightly oval hole about 70 metres on its longest side and 25 metres deep, with flames appearing out of the base and walls at various points.  It isn’t a total sea of pyrotechnics, just a constantly moving and changing pattern which makes you want to get close to the edge.  Which causes you to remember how it came to be there and step back again.  There doesn’t appear to be a translation in Turkmeni for the expression “Workplace Health and Safety” so there is no perimeter barrier. 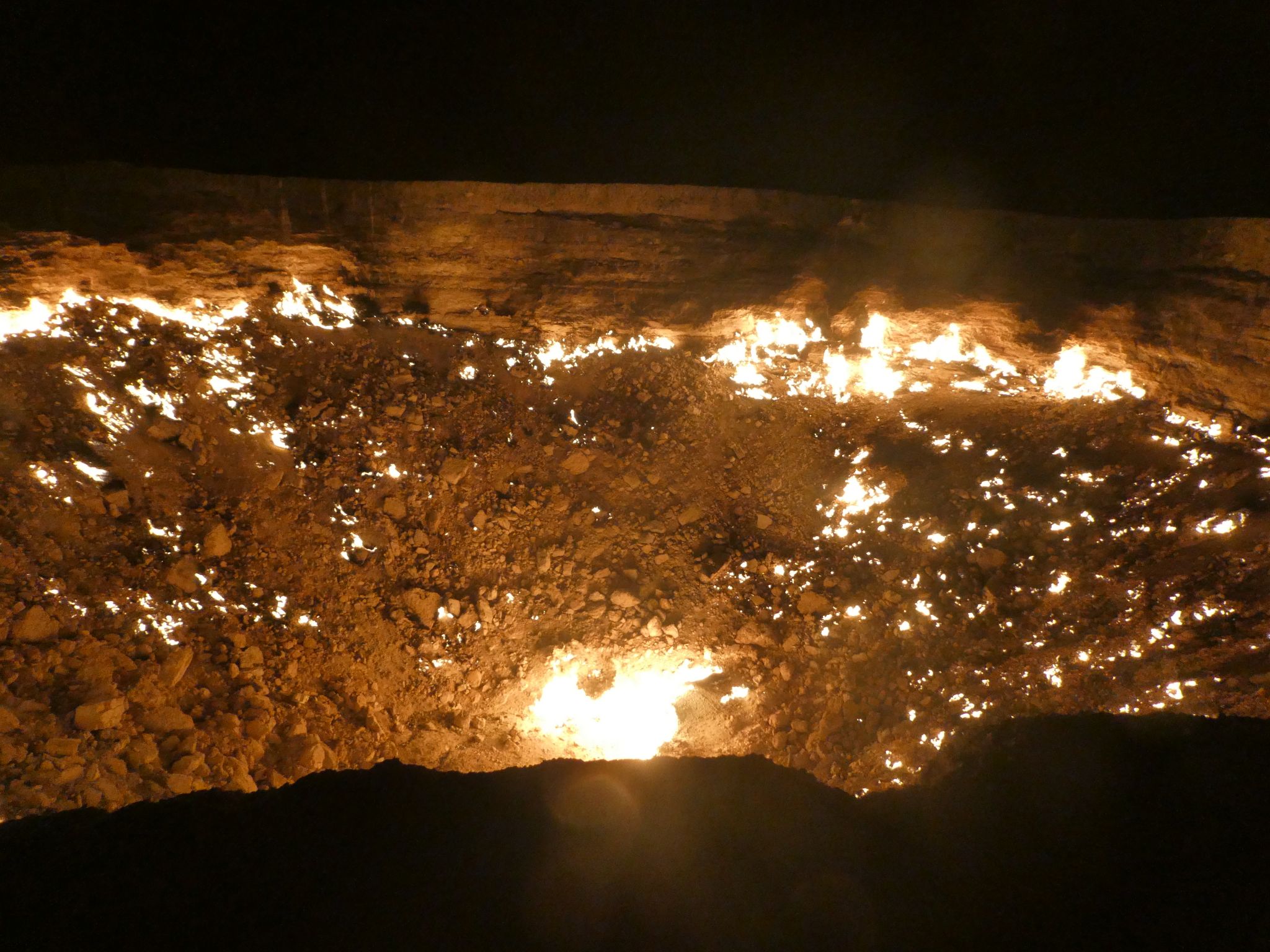 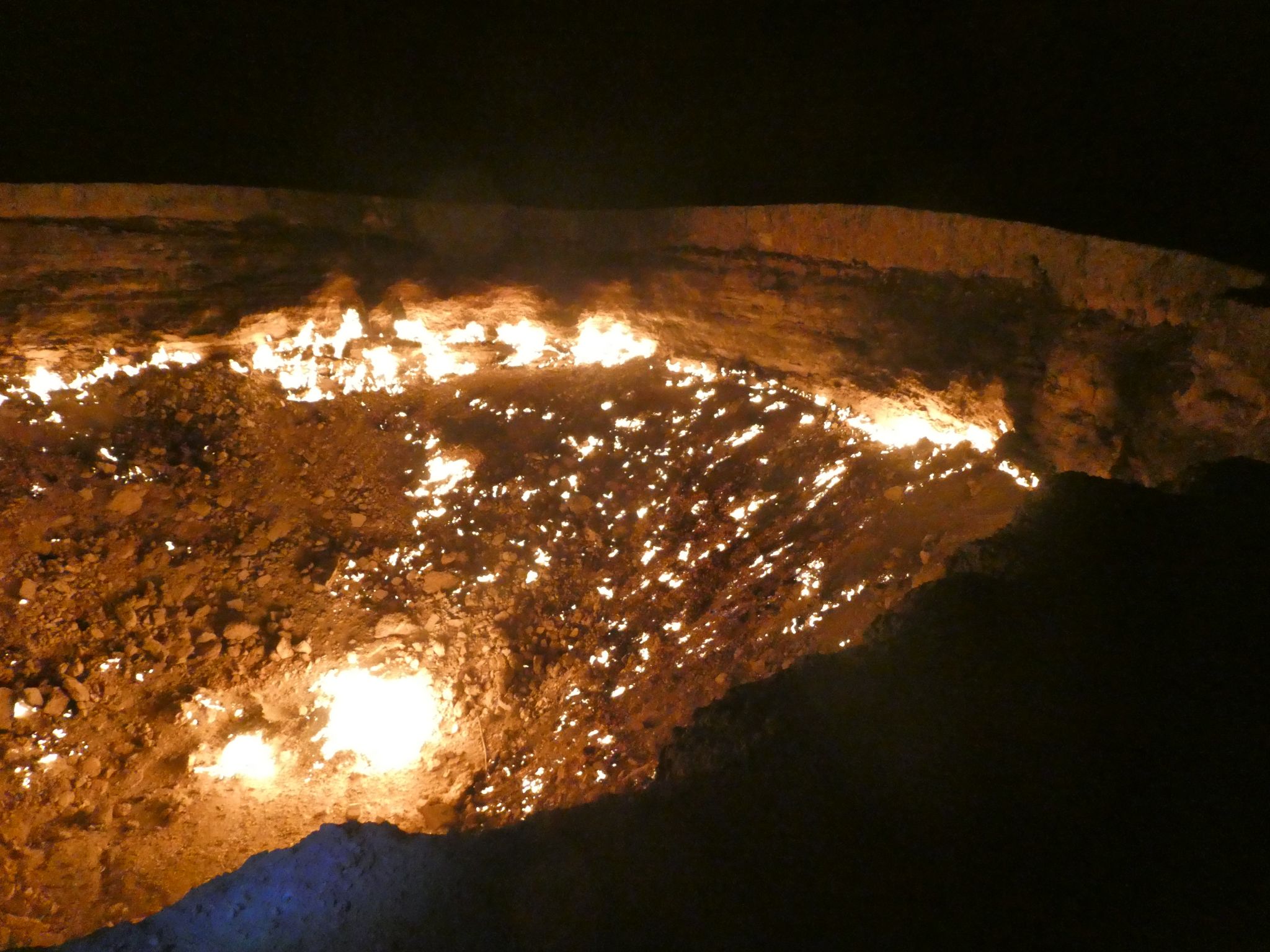 We stood watching it, enjoying the heat in the cool of the night, and then headed to our digs.  Our accommodation was, as described by our guide, a “traditional Turkman House” which to our admittedly inexpert eyes, looked remarkably like the Uzbeki yurts we had slept in at the Aydarkul Lake and the Aral Sea.  It was at least quite a bit warmer.

As some of you may be aware, yurts don’t traditionally have an ensuite, so ablutions required a 100m trek to a traditional Turkmeni thunderbox.  The gas crater at least provided an interesting navigation point.  The glow is visible for miles even after dawn. 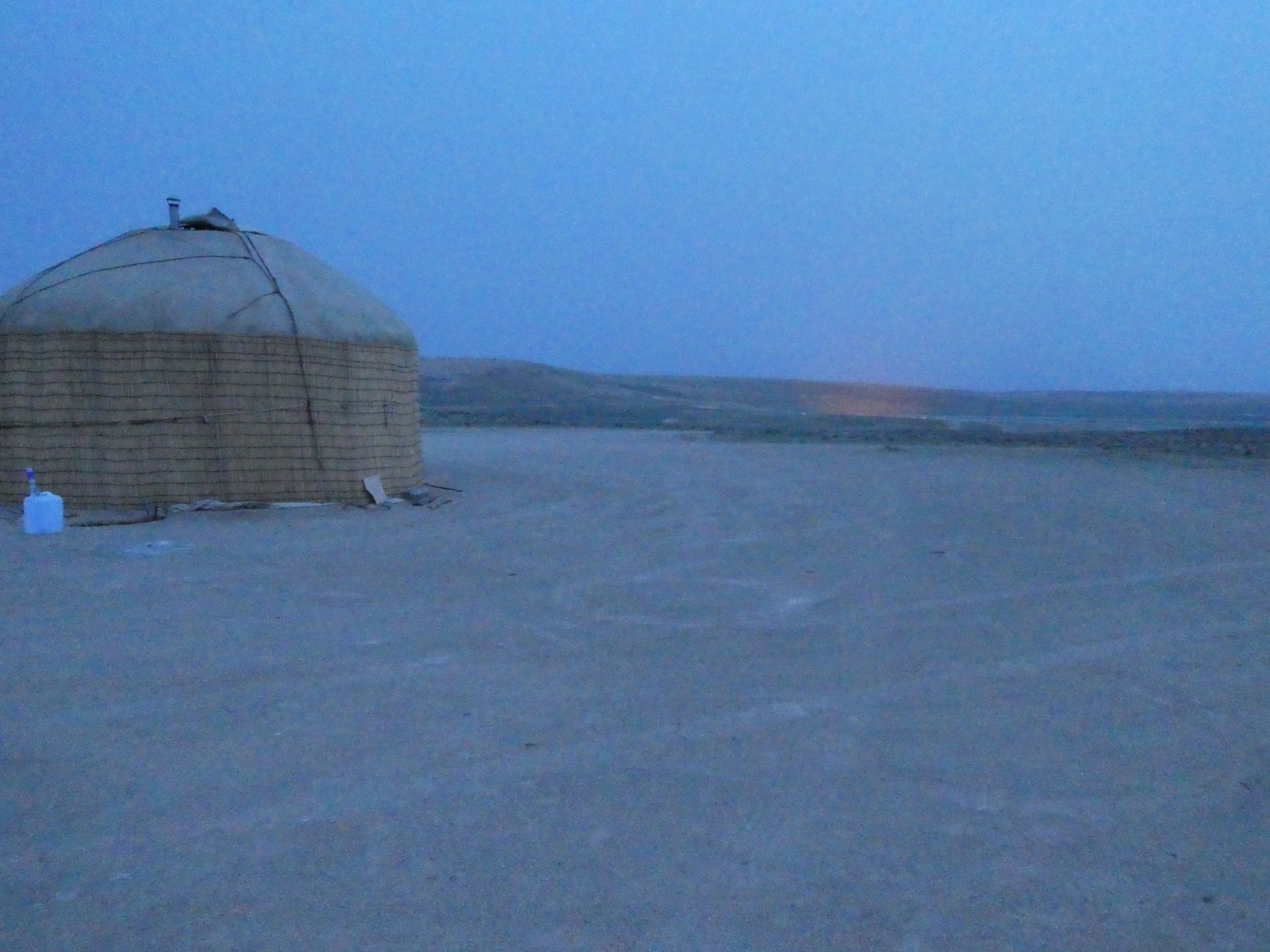 Next morning we walked up to see the burning crater in daylight.  It was not as spectacular as at night but quite fascinating nonetheless. 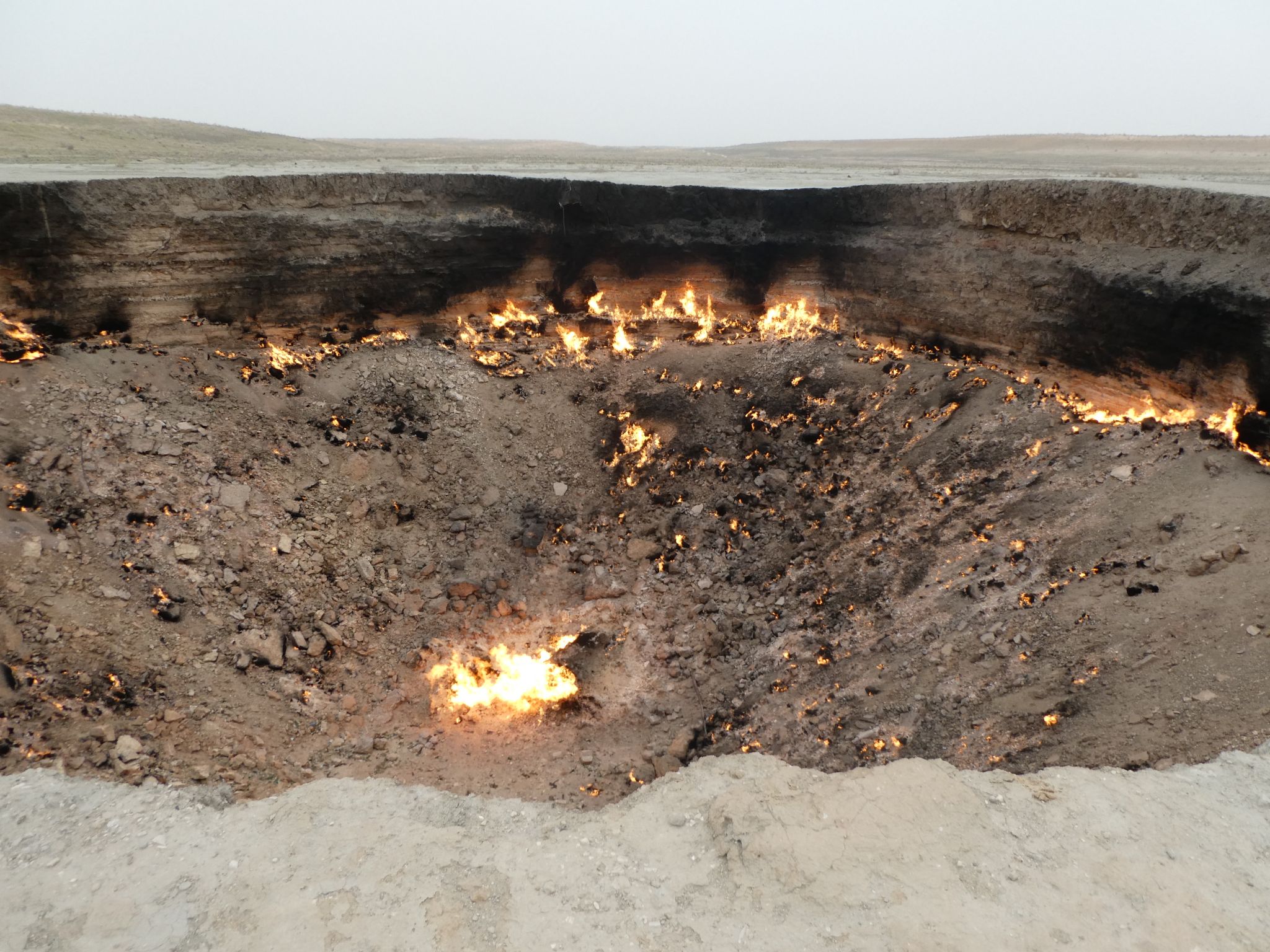 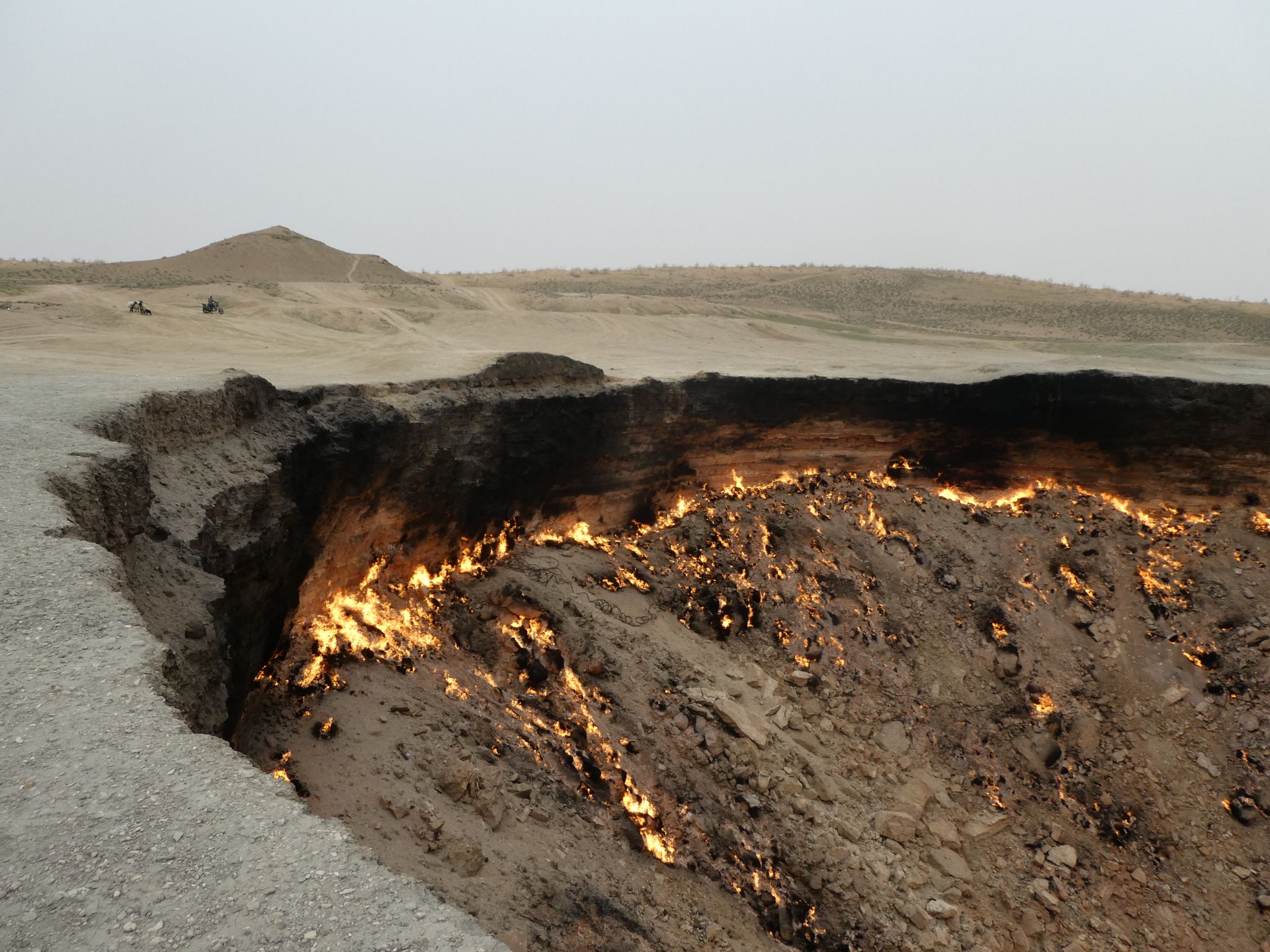 But by the end of the day we felt appalling.  We weren’t sure if this was the onset of a flu or gas poisoning.  Apparently incompletely burned natural gas releases carbon monoxide and we were showing the classic symptoms of CO poisoning.  If you are minded to go see this thing, maybe hightail it out of there a bit sooner.