After well and truly gassing ourselves at the Gas Crater, we headed for Ashgabat.  There’s not a lot for tourists to see in Turkmenistan besides the crater, and with the five day limit on our visas, we couldn’t have ventured any further afield anyway.

For a country that doesn’t care about criticism from the world community, Turkmenistan is very serious about controlling what foreigners see.  You must have a guide, and the guide must be with you all the time.  After the gas crater, the remainder of our time in Turkmenistan was uneventful but creepy.  When every sentence from your guide begins with the sentence “it is forbidden to” you get the feeling this is not Disneyland.

By Central Asian standards, Ashgabat is a brand new city.  It was founded only in 1881, and was made the capital of the Turkmen Soviet Socialist Republic in 1924 after the Russians conquered the region.   It became independent in 1991 following the collapse of the Soviet Union.

Post-independence, Turkmenistan has only had two leaders.  The first, Saparmurat Niyazov, had been First Secretary in the Soviet years, was appointed President on independence, won the next ‘election’ (he was the only candidate), and then had himself declared President for Life.

He sounds like the ultimate narcissist, and just a little bit unhinged.  He changed the names of days of the week and months of the year to the names of himself, his family or related topics, such as September which was renamed Ruhnama, the name of his autobiography.  He closed every library in the country on the basis that the only books a Turkmen needed to read are the Koran and his autobiography.  He renamed schools, airports and even a meteorite after himself and members of his family.  He called himself Turkmenbashi (Leader of all Turkmen) and renamed one of the major towns Turkmenbashi, after himself.

He also built a lot of statues celebrating himself. 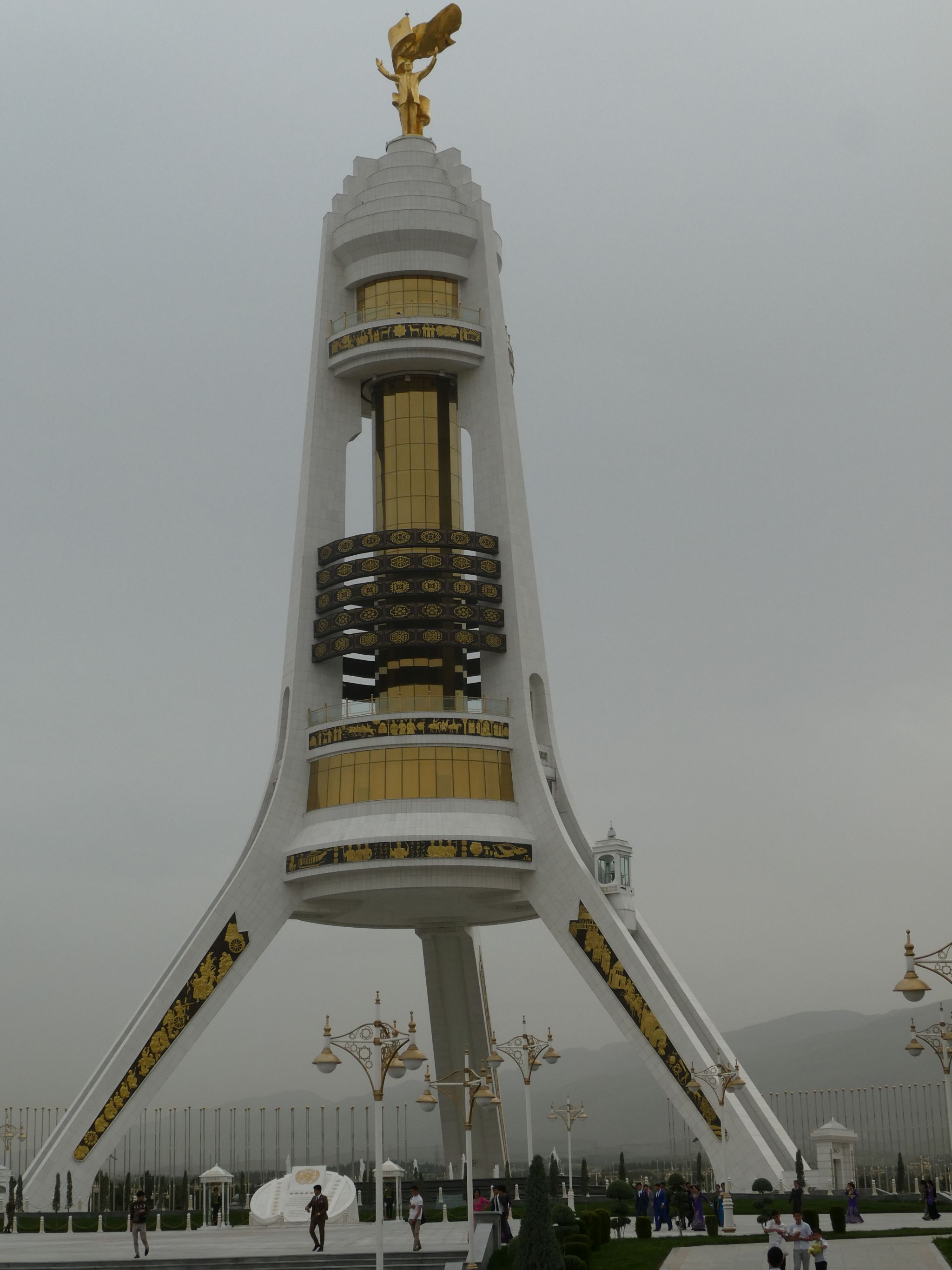 You can get away with this sort of thing when:

(a) you repress human rights, control the press, revoke all internet licences except the State-owned one and install surveillance cameras on all major streets in Ashgabat; and

(b) your country has an abundance of natural gas and oil resources so you have swags of money at your disposal with which to indulge your megalomania.

Niyazov’s father died in combat in WWII (at least, that’s the official version – an alternative version you won’t be told in-country is that he dodged fighting and was court marshalled) and his mother and two brothers were killed in a massive earthquake which devastated Ashgabat in 1948.  Niyazov was eight years old at that time.

The high water mark of his cult of personality is a statue high on a hill overlooking Ashgabat.  It is a raging bull, representing the earthquake, with the disintegrating world on its back.  Upon the crumbling earth is Niyazov’s mother, holding aloft a young Niyazov.  The rest of the statue is bronze, but our hero is pure gold – the future saviour and embodiment of the country. 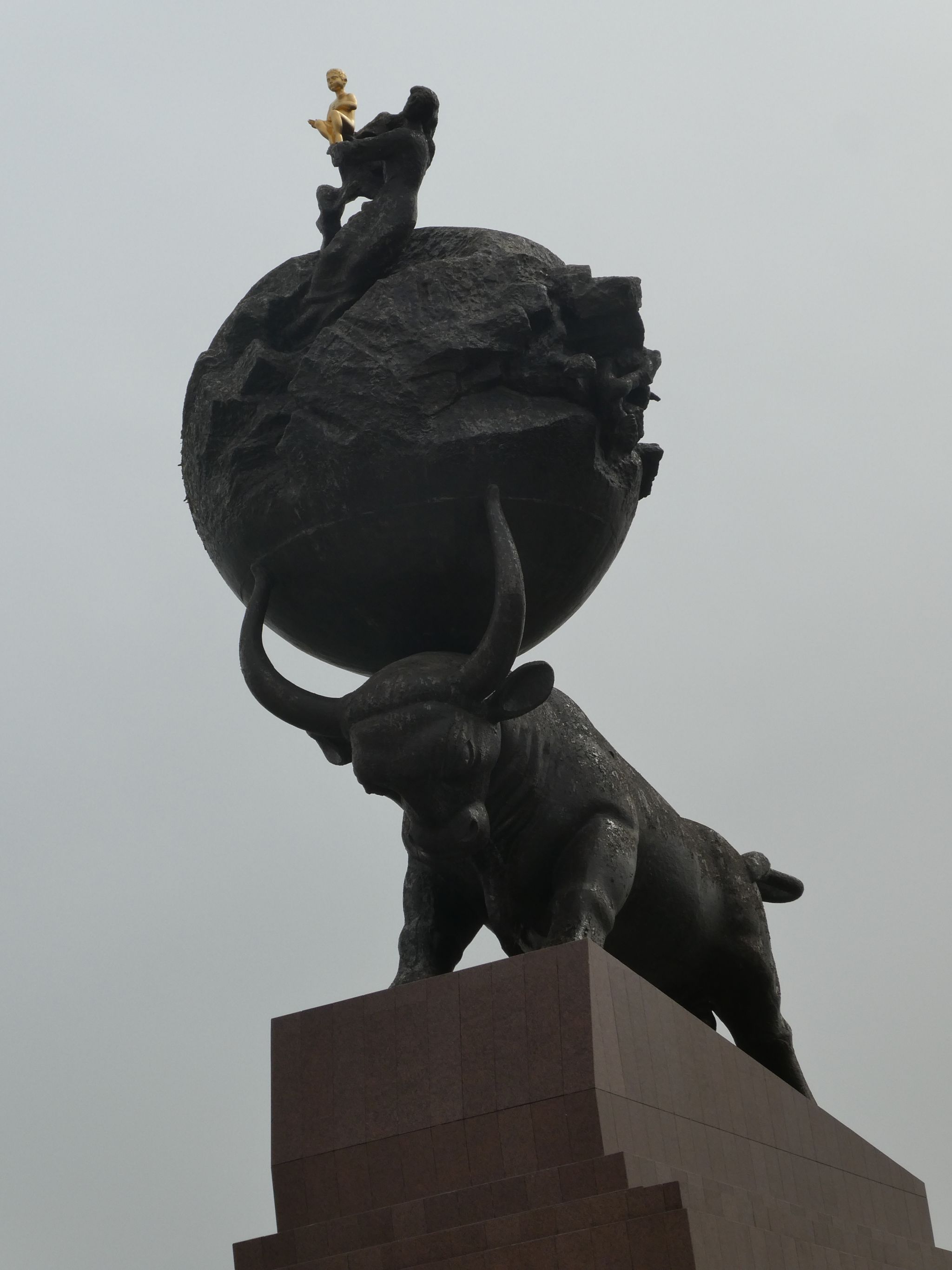 Niyazov died suddenly of a heart attack in 2006 at the relatively young age of 66.  His successor, Gurbanguly Berdimuhamedow, who has ruled since, has proven to be just as despotic, but obviously is much loved by the people, as he continues to win each election with a margin of exactly 97%.

He wound back some of the really kooky stuff, like changing the names of the months, but has continued the rigid repression of human rights and press freedoms, no internet and complete control of the economy.  Turkmenistan is currently ranked third worst in the world for press freedom, beaten only by North Korea and Eritrea.

When the city was flattened by the 1948 earthquake, it was rebuilt in Soviet concrete block style, with a five story height limit, as this was thought to be the limit for withstanding future earthquakes.

The post-independence Presidents have rejected this thinking and bulldozed much of the Soviet era buildings in favour of a new vision – a city of white marble rising out of the desert to rival Dubai or Abu Dhabi.

Minor problem: There is no marble here.  Solution:  Import marble.   A lot of marble.  In 2013, the Guinness Book of Records recognised Ashgabat as the city with the most marble buildings in the world, at that time 543 new marble building comprising some 4.5 million square metres of white marble.   Construction has continued unabated since.  It might explain why there appears to be no money to spend on roads in the rest of the country.

It is impossible to describe Ashgabat because the place is a parody.  As if Kim Jong Un decided to create a completely new city of 2 million people as a homage to himself and his family, and engaged Donald Trump to design it.  The outcome is truly, epically, stupendously awful.

There is the world’s largest (Guinness Book of Records again) enclosed Ferris wheel, in white marble. 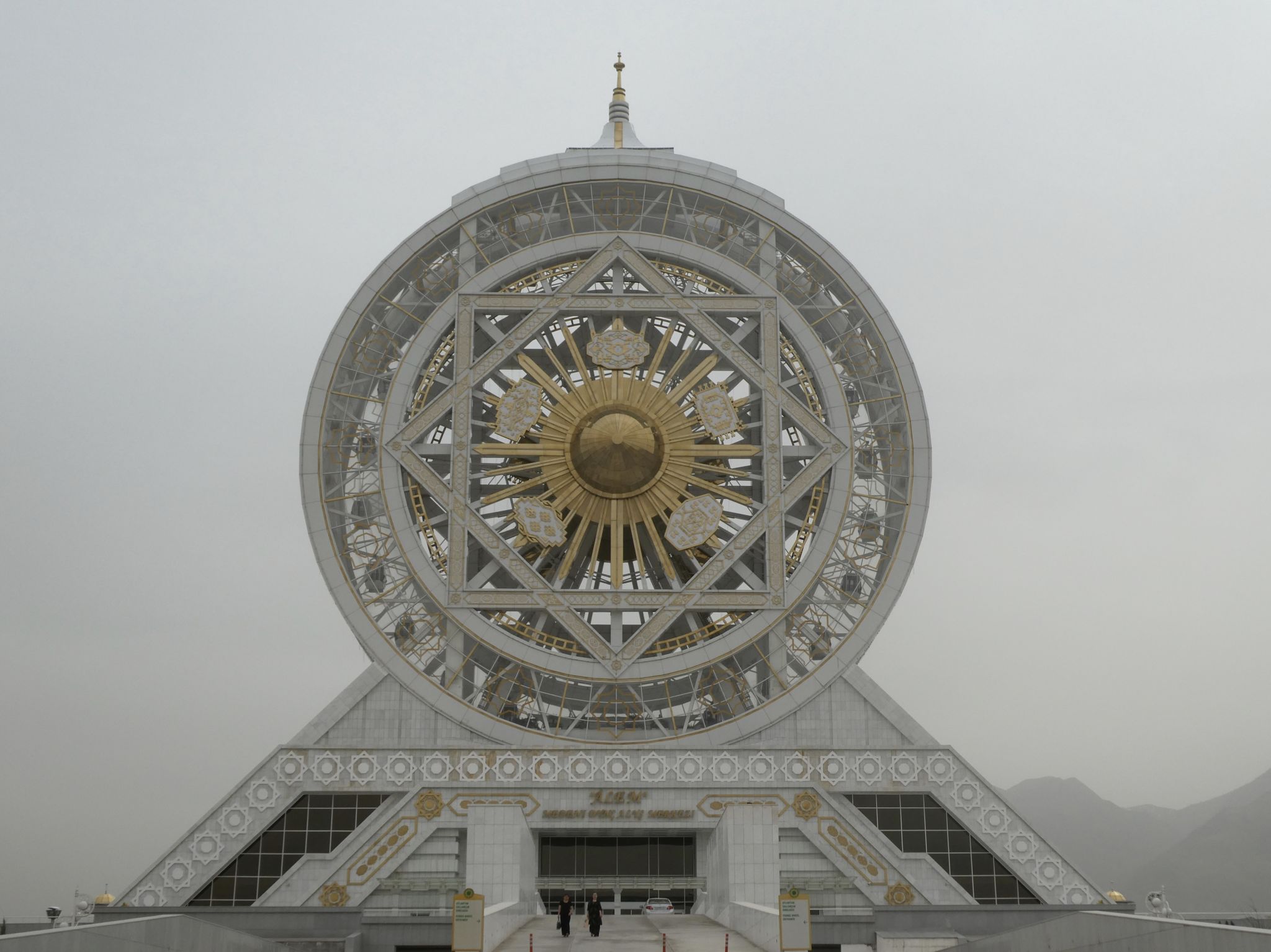 And of course what every desert dwelling populace needs is a giant white marble ice skating rink.  Also a white marble children’s indoor play emporium that no ordinary citizen can afford to take their children to. 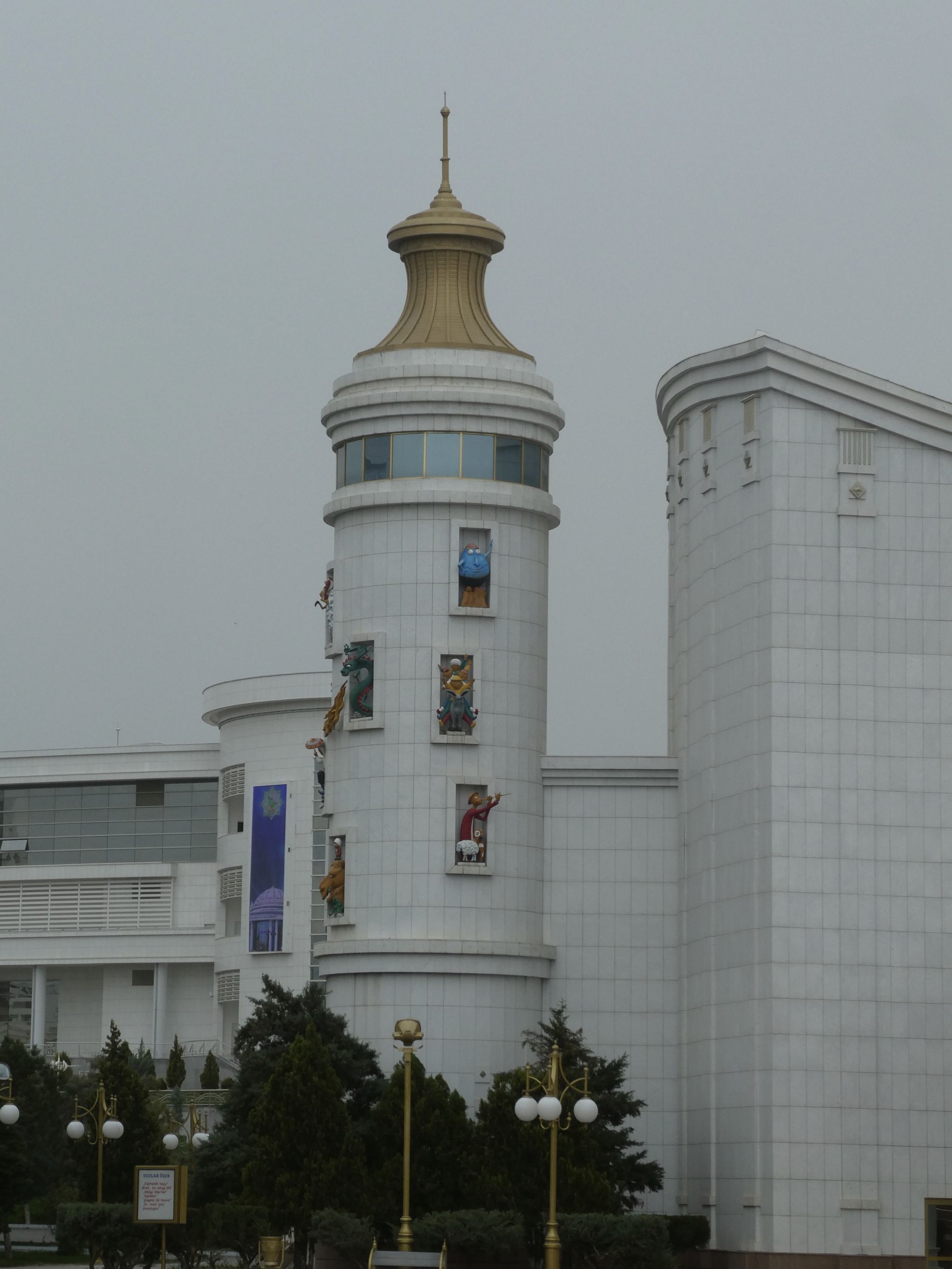 Add a generous supply of enormous white marble LED screens to broadcast propaganda, sorry we mean sport, to your people. 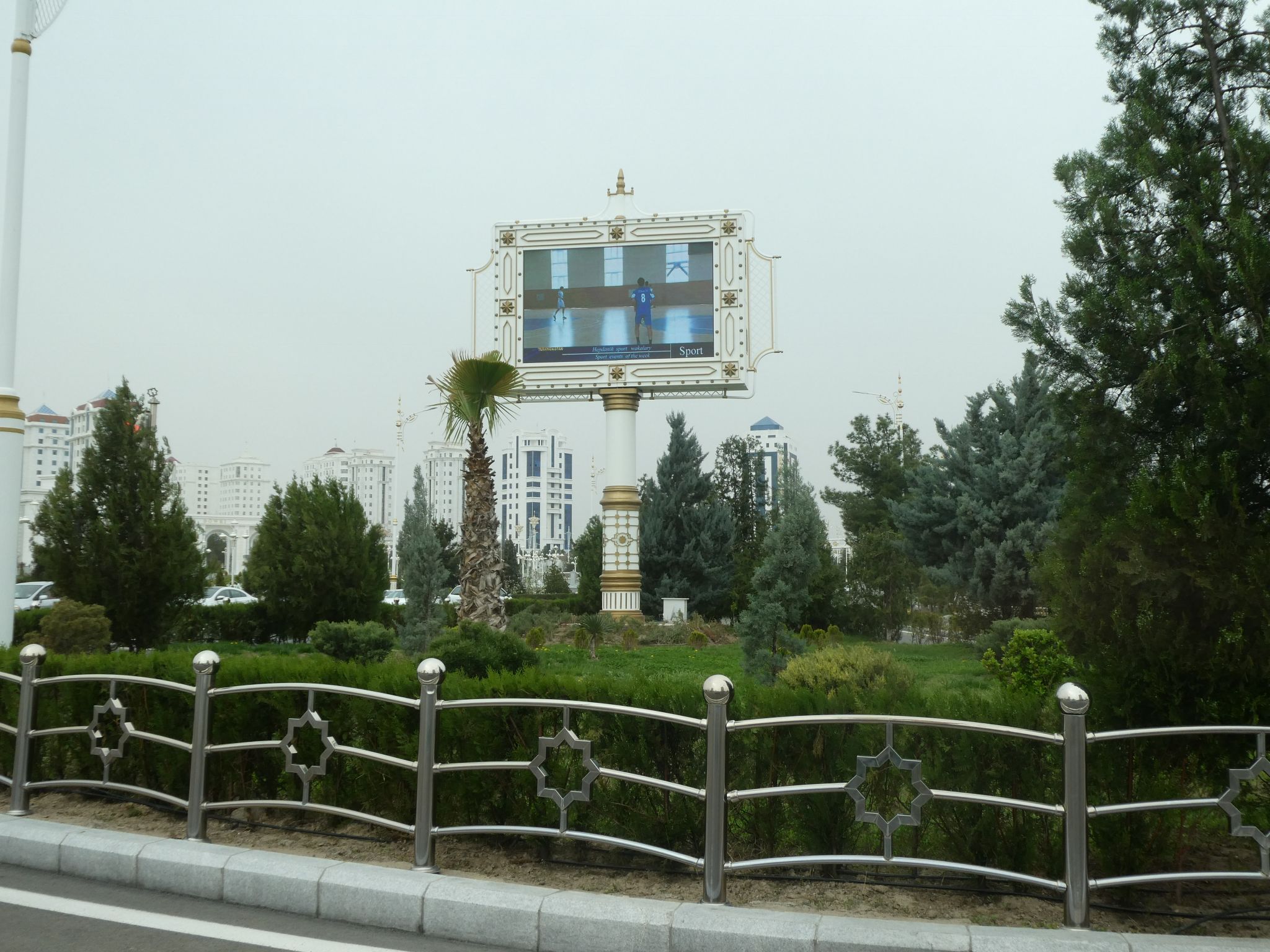 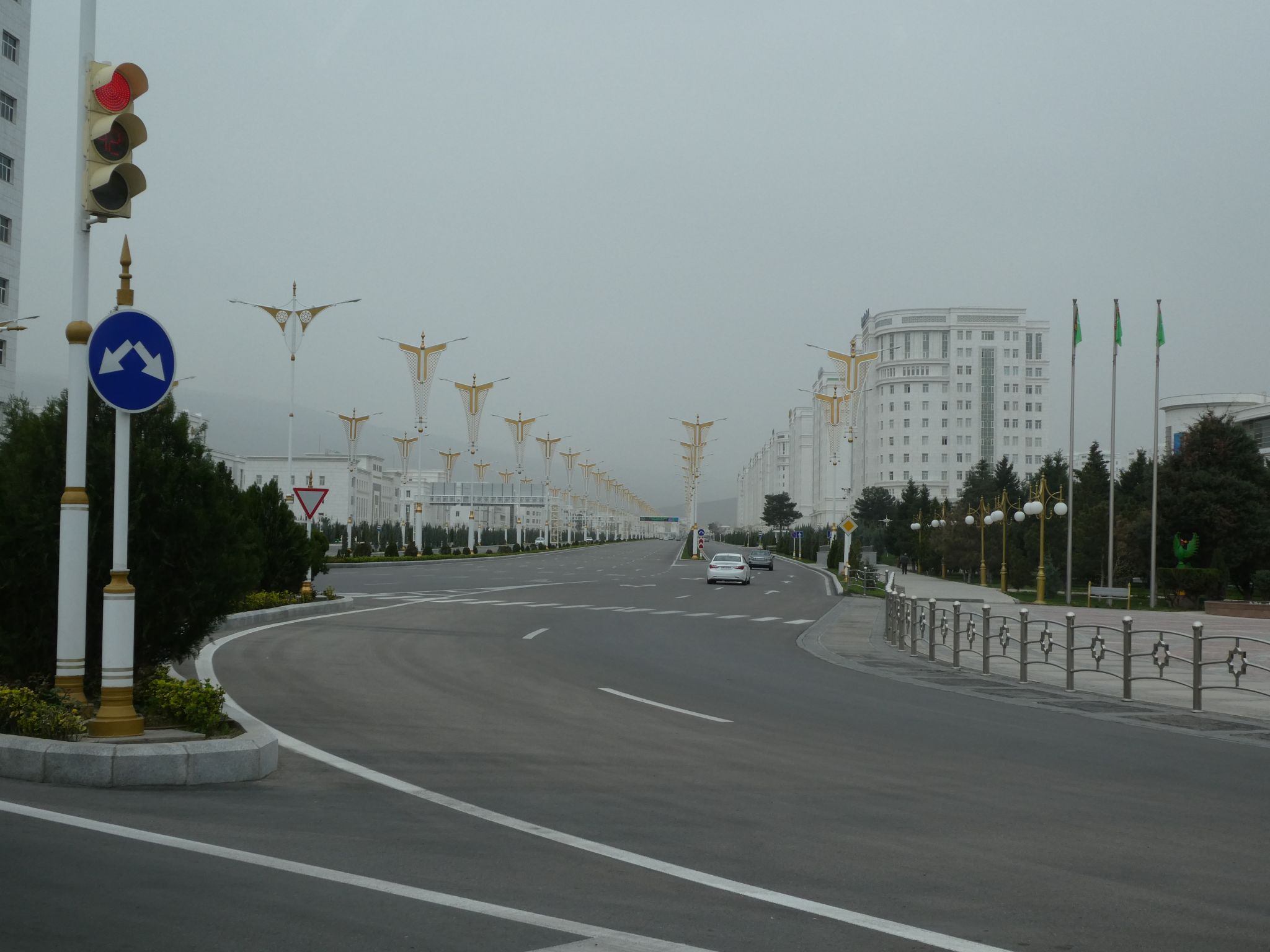 There is the obligatory white marble Presidential Palace but we have no photos of that as photographing it is forbidden.  Even loitering near it is forbidden so all we got was a surreptitious drive by.

The marble apartment blocks may look better than Soviet-era concrete brutalism, but even our guide, who generally toed the official line in his comments, admitted some of them are pretty ordinary inside.

The real problem is that it is all so terribly artificial and sterile.  There is almost no one on the streets, no colour and movement, few signs of life.  There are no cafes or street vendors or litter or graffiti.  Just enormous boulevards and more white marble.  We spent about five hours being driven around the city viewing these wacky points of interest and we saw practically no people.  Where were they? 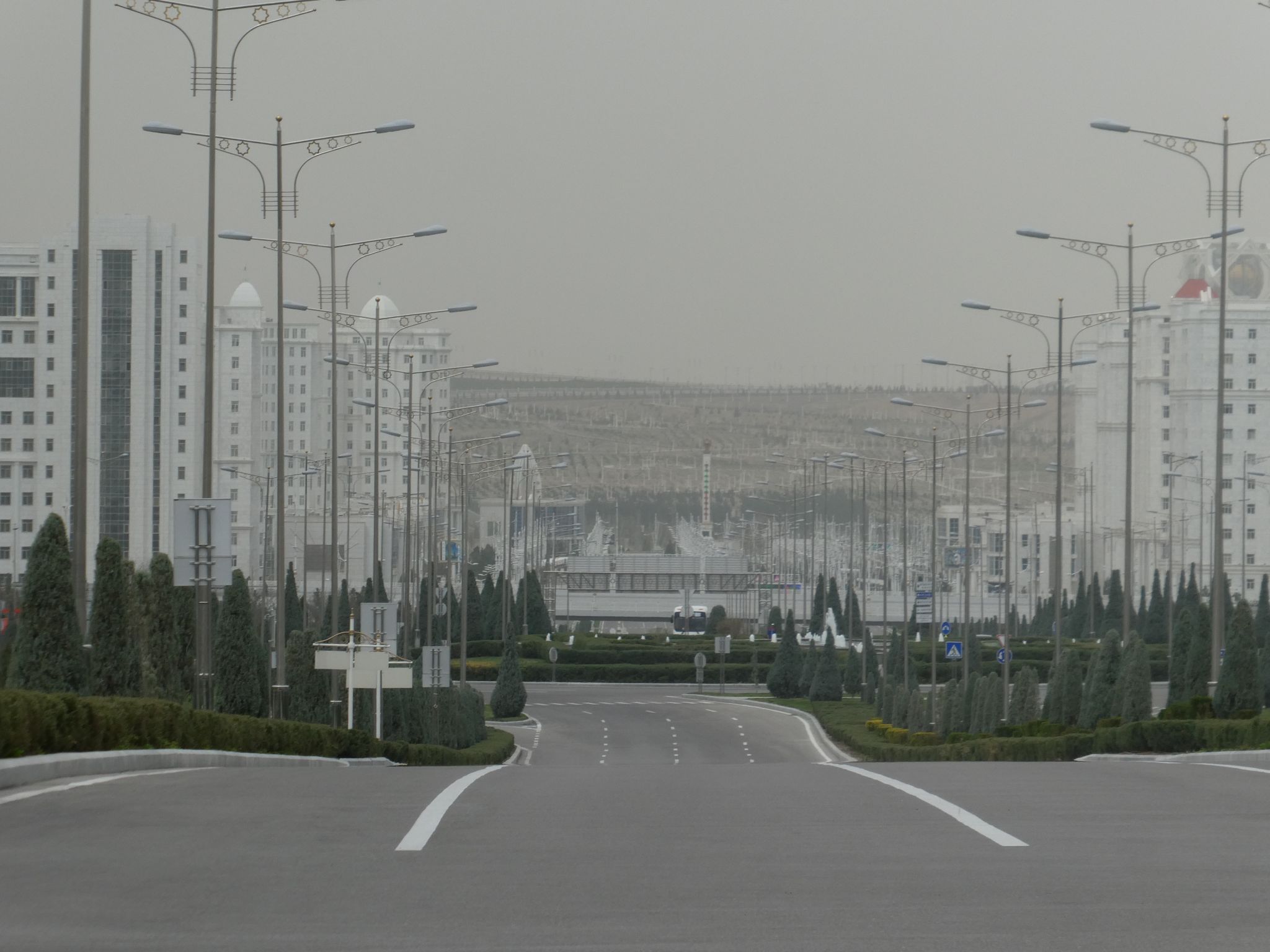 There was one beautiful building – the international airport.  Even it has a wacky story.  There are two, identical in design, which as you would expect, were personally designed by and named after President Niyazov.   The first one was built to replace an older terminal and  the design was such that the swanky new terminal obscured the view from the air traffic control tower, so controllers couldn’t see the planes coming in.  When the builders pointed this out to the President, his response was that “it looks better this way”. Presumably not from the perspective of passengers or crew.

The airport is beautiful for two reasons.  Firstly, it is actually quite a work of art. 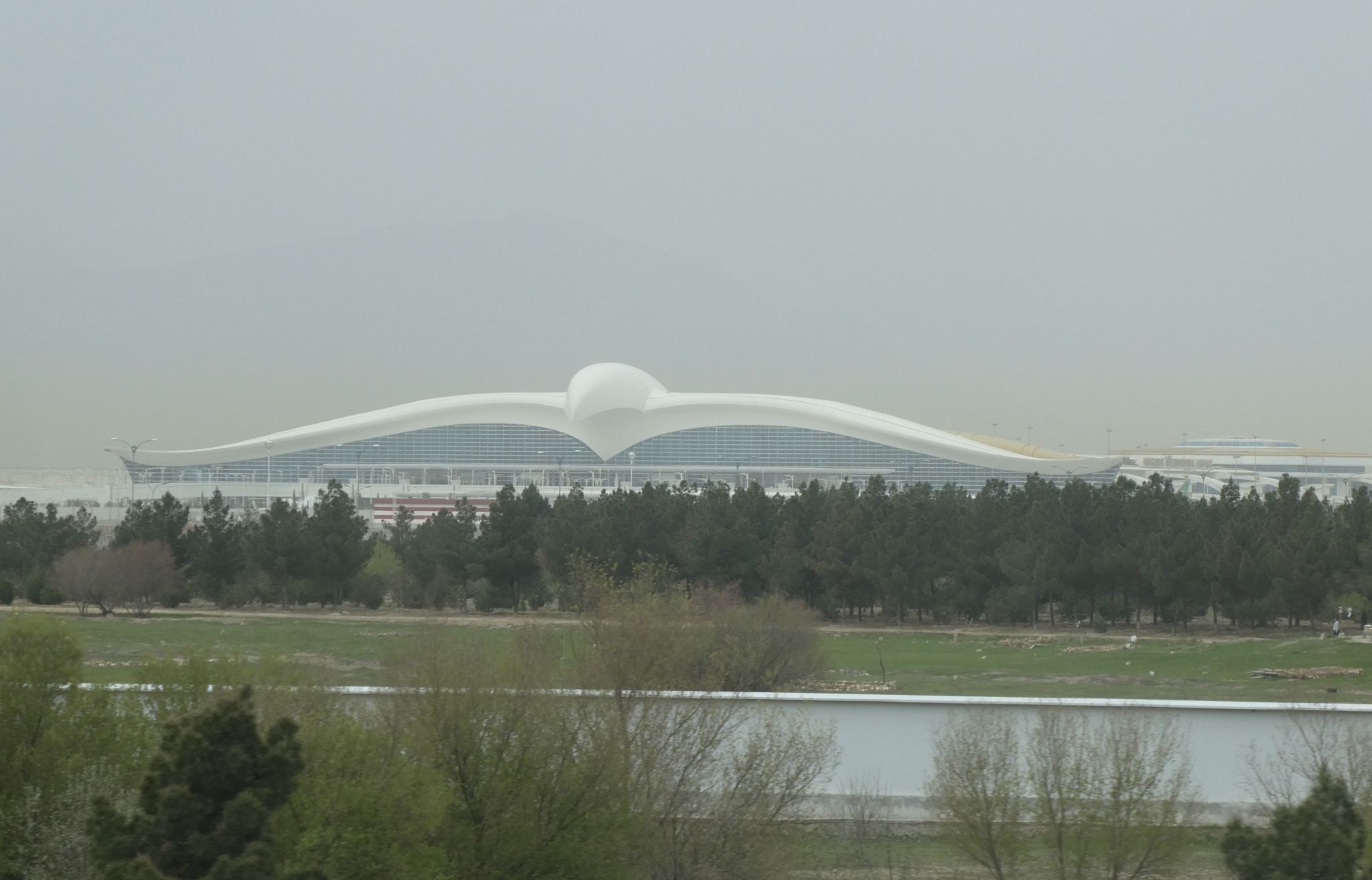 Secondly, our flight departed at 2.30am on the morning our visas expired and was the only Turkish Airlines flight out that day.  We had seen enough of Turkmenistan and judging by our experience coming in, the consequences of overstaying would not have been pretty.  In all our years of travel, Turkmenistan is the only place we have felt nervous about making a connection to get out.

Our guide’s boss must have shared our concern because on instructions, our guide turned up at midnight to make sure we did not miss our flight.

Our overall impressions of Turkmenistan?  Given where we were coming from and headed to, it made sense to have a look.  The gas crater is amazing and we don’t know of anything like it anywhere else.  Ashgabat is just another example of the idiocy that can ensue when megalomania prevails and it’s suffocating not being able to move about at will.

One thing we’ve learned over years of travel is that we are ocean people not desert people.  Our flight to Istanbul left on time and with us on board, bound for a city we’ve visited previously and loved, followed by some quality time on the Aegean coast.  All was once more right with our world.