”Like a bird on the wire, like a drunk in a midnight choir, I have tried in my way to be free.” (Bird on the Wire, Leonard Cohen)

In 1959, Leonard Cohen was living in London attempting to establish a career as a poet and writer.  Dispirited by the cold, wet English weather and feeling miserable due to a toothache, he went into a Bank of Greece and was greeted by a teller with a relaxed smile and a deep suntan.  The teller said he had just returned from a holiday in Greece and it was already Spring there.  The next day Cohen bought a ticket to Athens, then continued by boat to Hydra, and the rest, as they say, is history.

When he arrived on Hydra there was little electricity but a few years later it arrived.  He disliked the visual pollution of the poles and wires but was heartened by the sight of birds perched on them, providing the inspiration for the first line of Bird on the Wire.

The second phrase “like a drunk in a midnight choir” referred to him and his friends with their arms wrapped over each others’ shoulders staggering home up the steep cobbled stairs of Hydra’s lanes, singing drunkenly after a big night at the tavern.

In 1960 he bought a house which he used as a base for many years and which is still owned by his family.

Of course, Julie wanted to find it.  It isn’t identified in any way and a scouring of the internet revealed the following information: from the building on the harbour front that used to be a bakery, walk up about 100 or so steps, find the Four Corners grocery store, turn right after the grocery store and it’s on one of the lanes in there.

We also had a photo of the front door – whitewashed house, blue-grey door, bougainvillea growing beside it, door knocker in the shape of an upside down hand.

We found the Four Corners grocery store with no real difficulty.  We took the next right, and then we hit a problem.  Basically, every house in Hydra is whitewashed, and about 90% of them have this same distinct colour for doors and window shutters.  Plants come and go, so we weren’t putting too much weight on using the bougainvillea as a guide.  Our hopes were on the distinctive door knocker.

Well, either a salesman came through in the 1960s offering bargain prices on hand shaped door knockers or the locals have perpetrated a great trick on Cohen tragics.  Dozens of doors in this neighbourhood have exactly the same door knocker as the one in the picture.

We combed the lanes.  Julie photographed several possible matches.  None of them looked quite right.  Sensing that John’s willingness to indulge this silliness was wearing thin, Julie offered to call it quits.  No resistance was offered.

Emerging from the network of lanes back at the Four Corners grocery store, we considered asking the store owner.  He was an elderly gentleman, so old he may well have remembered when Leonard lived in the house, but we thought he probably gets sick of being asked the same question every day.

Still toying with this option, we saw a man striding toward us with his nose buried in a GPS.  He had to be seeking the Cohen house and clearly had better intel.  He was and he did.  We trailed along and a mere two turns into the lanes, there it was.  The bougainvillea was indeed still there, along with that damn door knocker.

Then another couple arrived.  They had asked the man in the Four Corners grocery store and he had, like just about everyone in Greece, been very helpful and pleasant in giving directions. 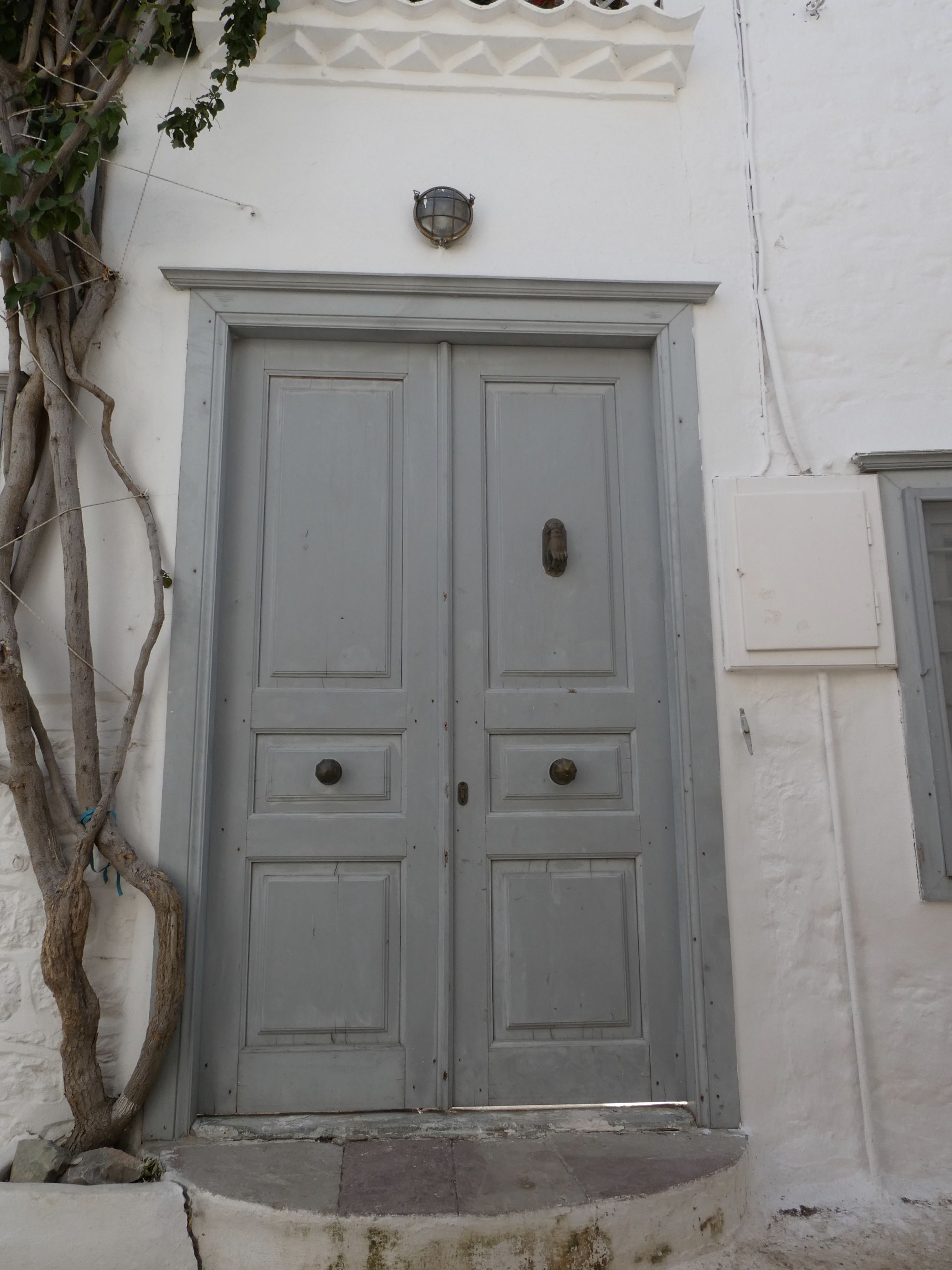 Continuing the pilgrimage, we also had dinner at the tavern frequented by Cohen. 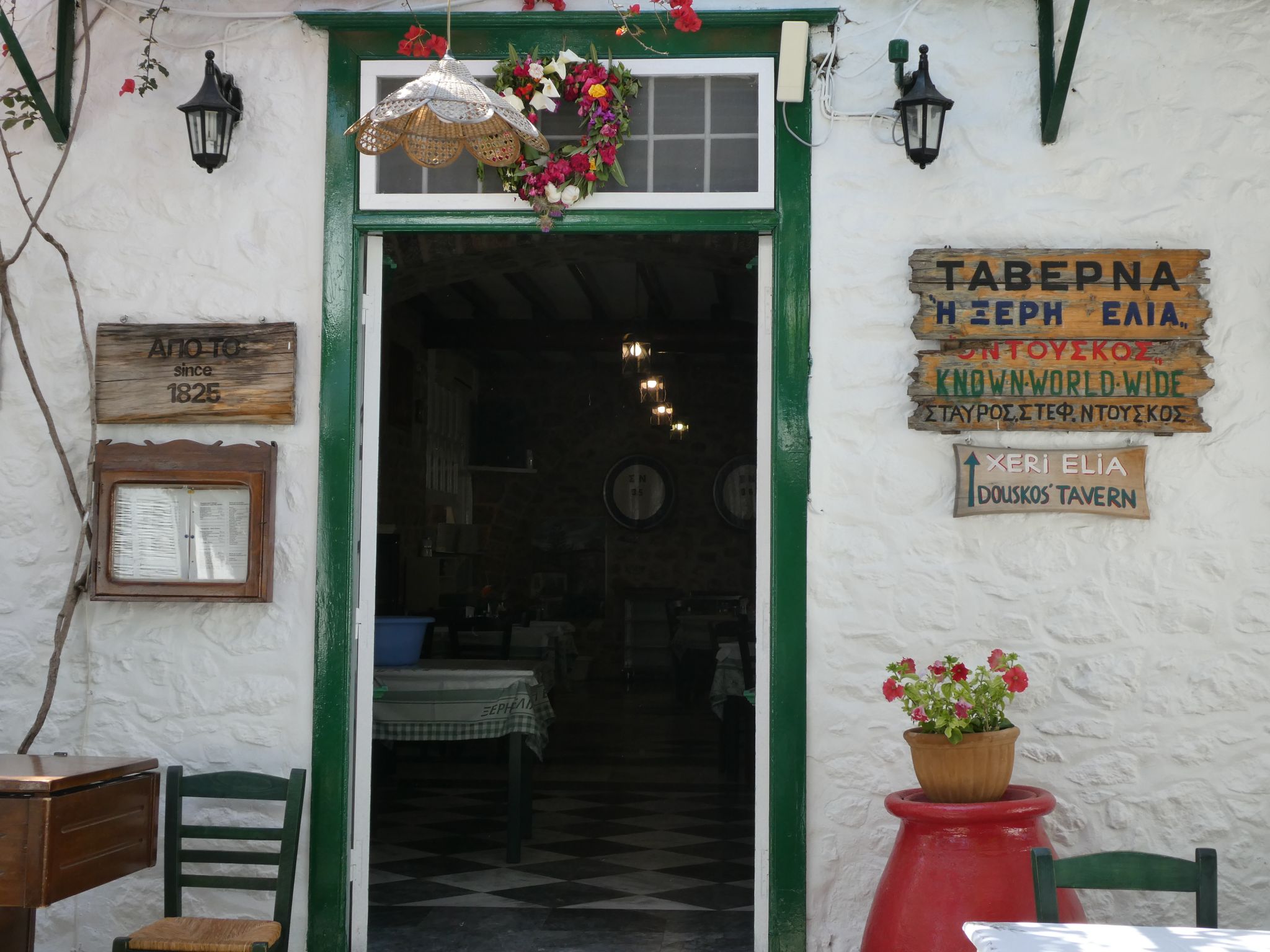 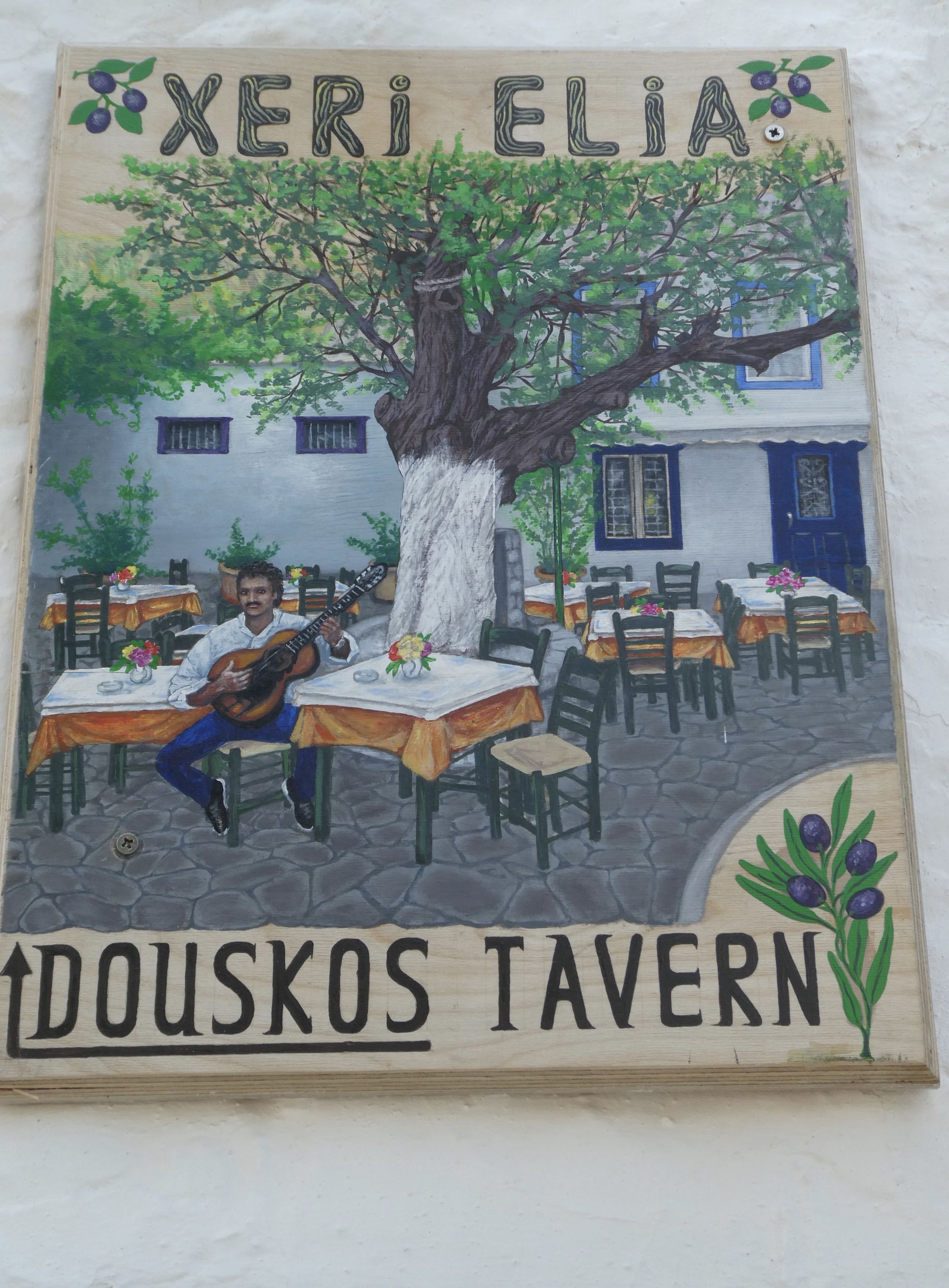 The tavern is the site of that iconic photo of Cohen playing a guitar beside a tree in a well.  If you, too, are a Cohen tragic you will know the photo.  The tree remains. 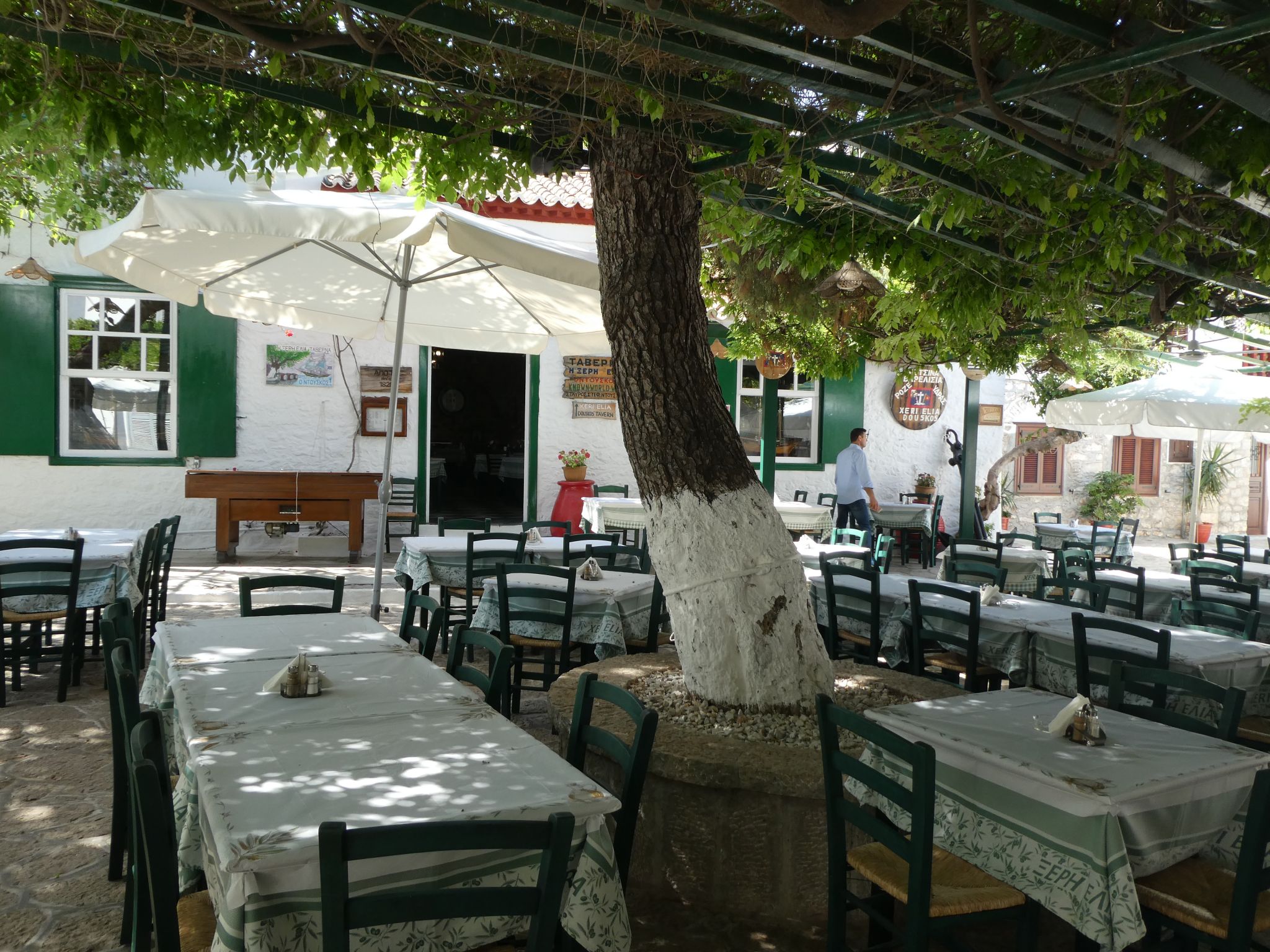 Cohen first played to a public audience out the back of the then bakery on the harbour.  It’s now a bar cafe. 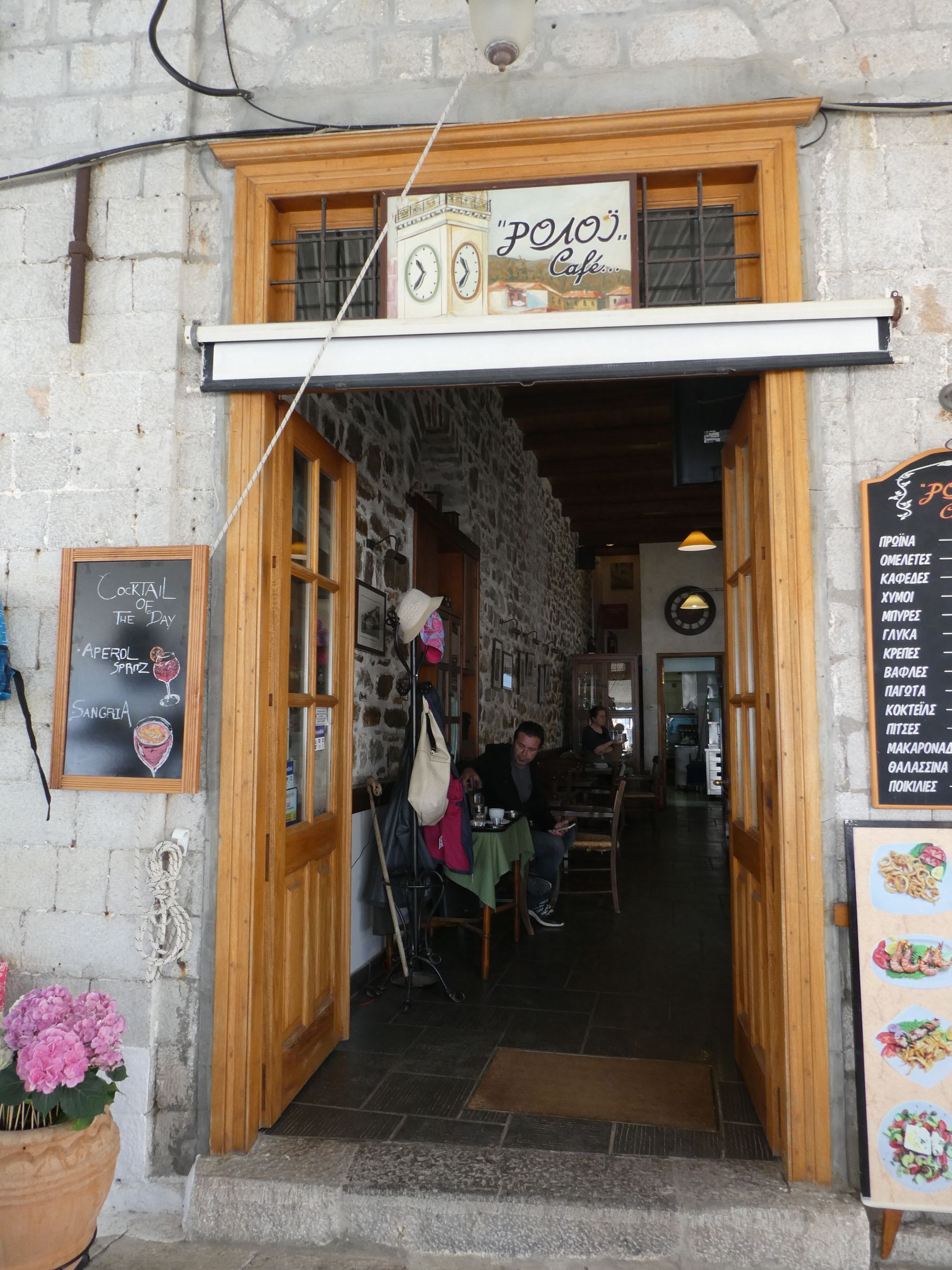 And the old bar he frequented half way between the harbour and his home is now a very swanky restaurant. 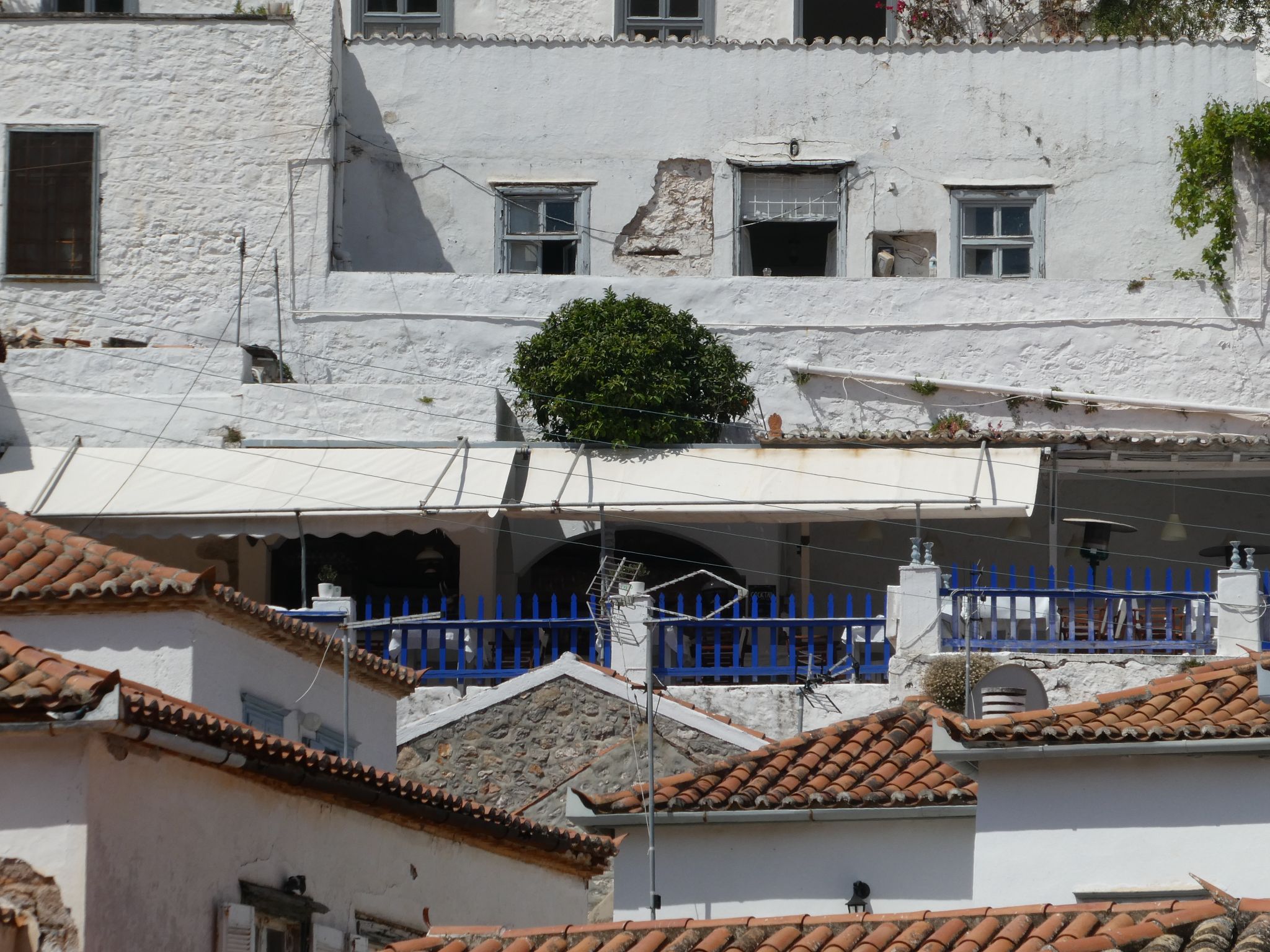 Julie was satisfied.  John breathed a sigh of relief.  We thought the homage was over.  And then, on our final day in Hydra we were out walking along the cliffs and we spotted this tribute.  The Leonard Cohen Forum meets on Hydra every two years, and in 2017, in recognition of his passing the previous year, the Forum had donated this bench which is positioned to give views over the sea similar to the views from Leonard’s house. 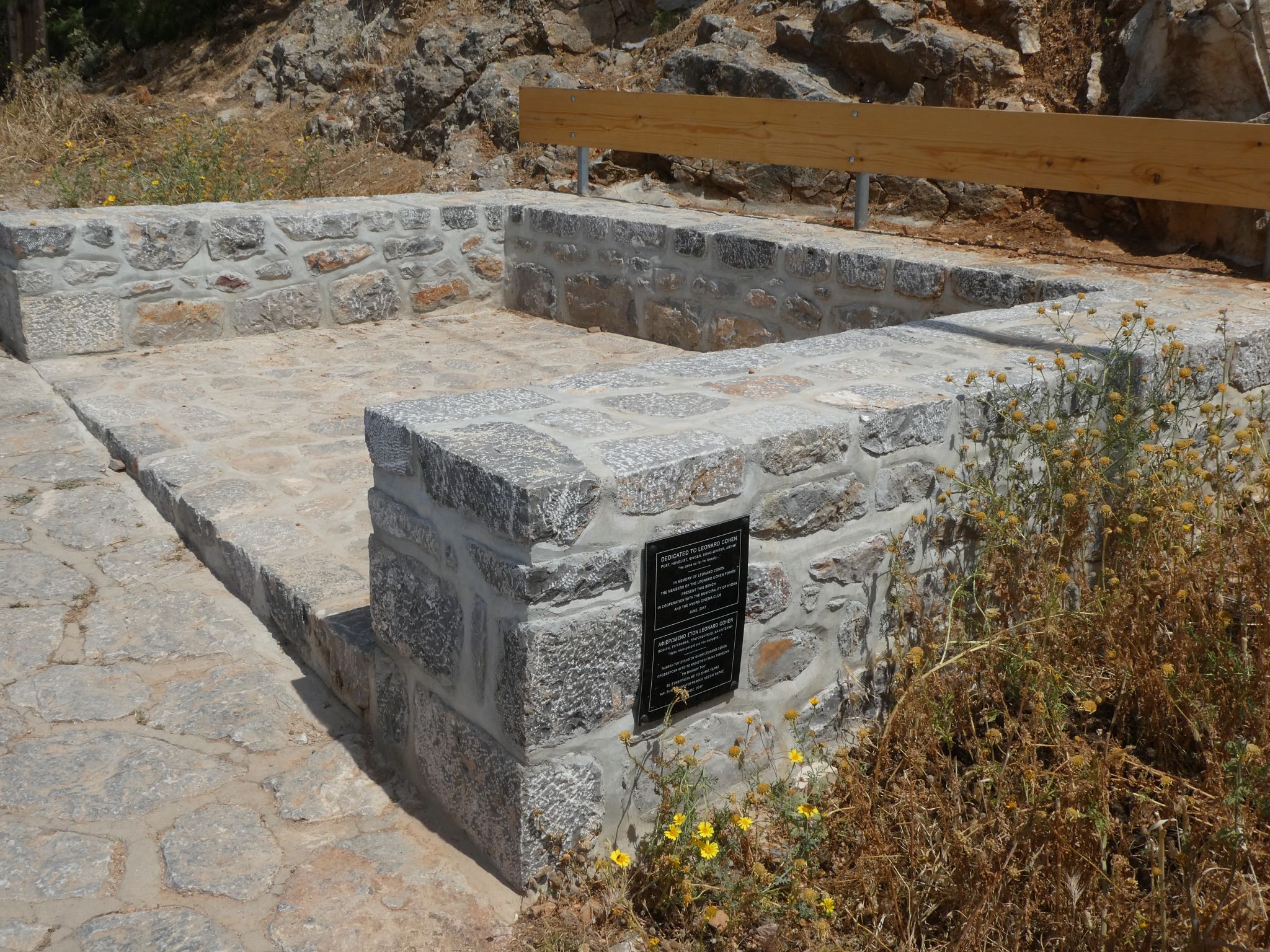 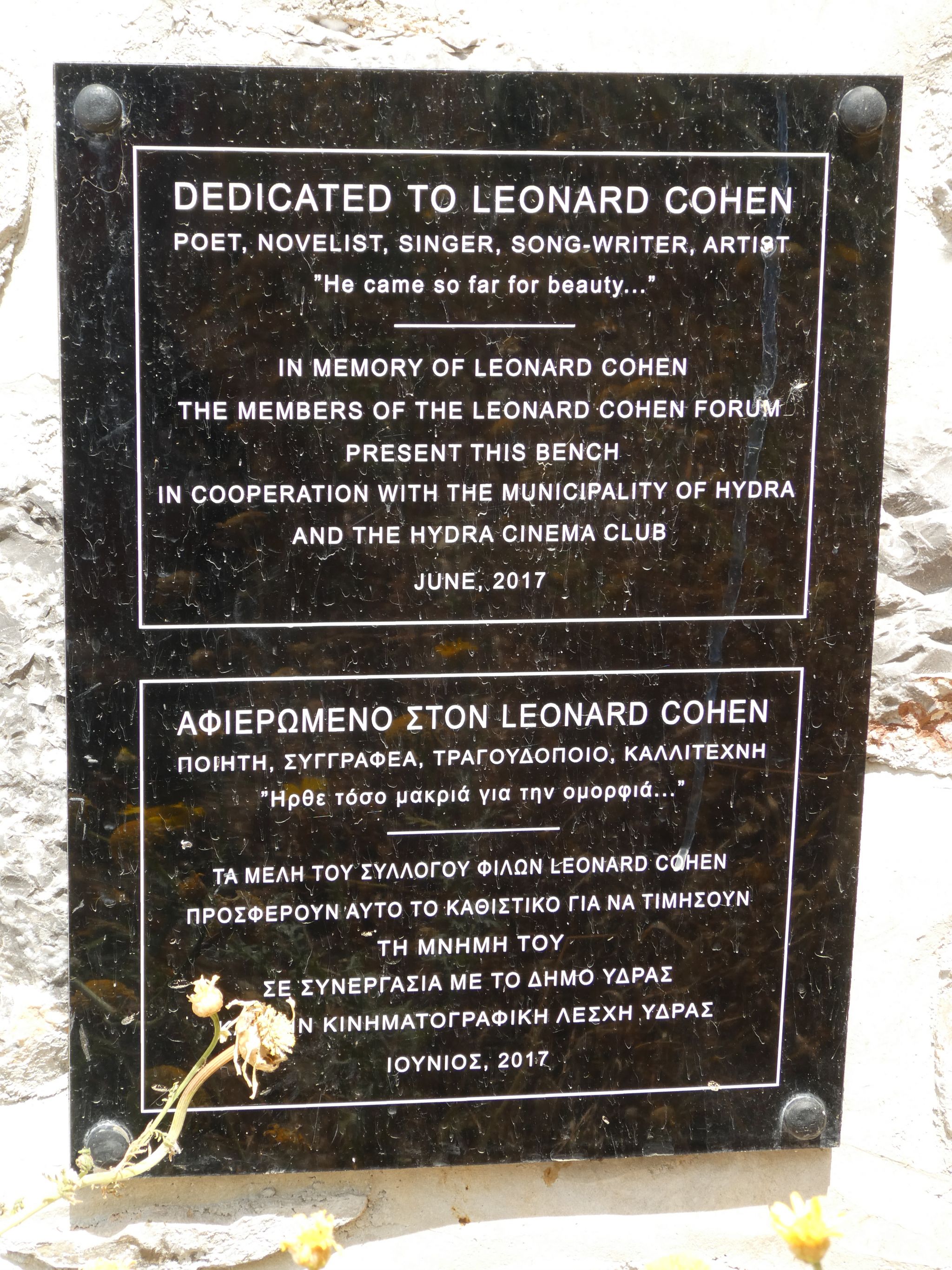 John thought it was terribly irresponsible for the local council not to have erected a protective barrier to prevent overwrought depressives, aka Cohen fans, leaping from the cliffs.  Ha, bloody ha, as Julie’s father, another Cohen tragic, would have said.

But over the almost 25 years of living with a Cohen tragic, John has taken small steps toward Cohen appreciation.  He now admits that Hallelujah is his favourite song, albeit he prefers the Jeff Buckley version.  As Leonard himself sang in Anthem, “There is a crack, a crack in everything, that’s how the light gets in”.