There’s only one direct bus per day from Gjirokastër to Berat.  The driver was sick so the bus didn’t run.  It seems the concept of substitute drivers is yet to make it to Albania.

So from Gjirokastër we caught a bus to the outskirts of Lushnje, then waited at a cross roads for a minibus headed to Berat.  A minibus eventually stopped.  It was already full but this didn’t deter the driver from stuffing four more passengers on.  To accommodate the extras, the driver’s assistant produced tiny plastic stools which he squeezed into the aisle.  In a sign that chivalry is not dead, he also demanded a young fellow surrender his ‘real’ seat to Julie.

We are still not sure it’s destination was Berat but it duly offloaded us at a local bus stop on the edge of town.  A bus arrived in a few minutes which took us to the centre and a two minute walk to our digs.

As noted in our previous post, Berat shares a joint UNESCO World History listing with Gjirokastër for architectural significance, but the two are very different.  Berat is known as the ‘town of a thousand windows’ which is thought to be a reference to the fact that the houses are set so steeply one above the other that entire neighbourhoods looks like a bank of windows.  It is one of the best preserved Ottoman era towns in the Balkans. 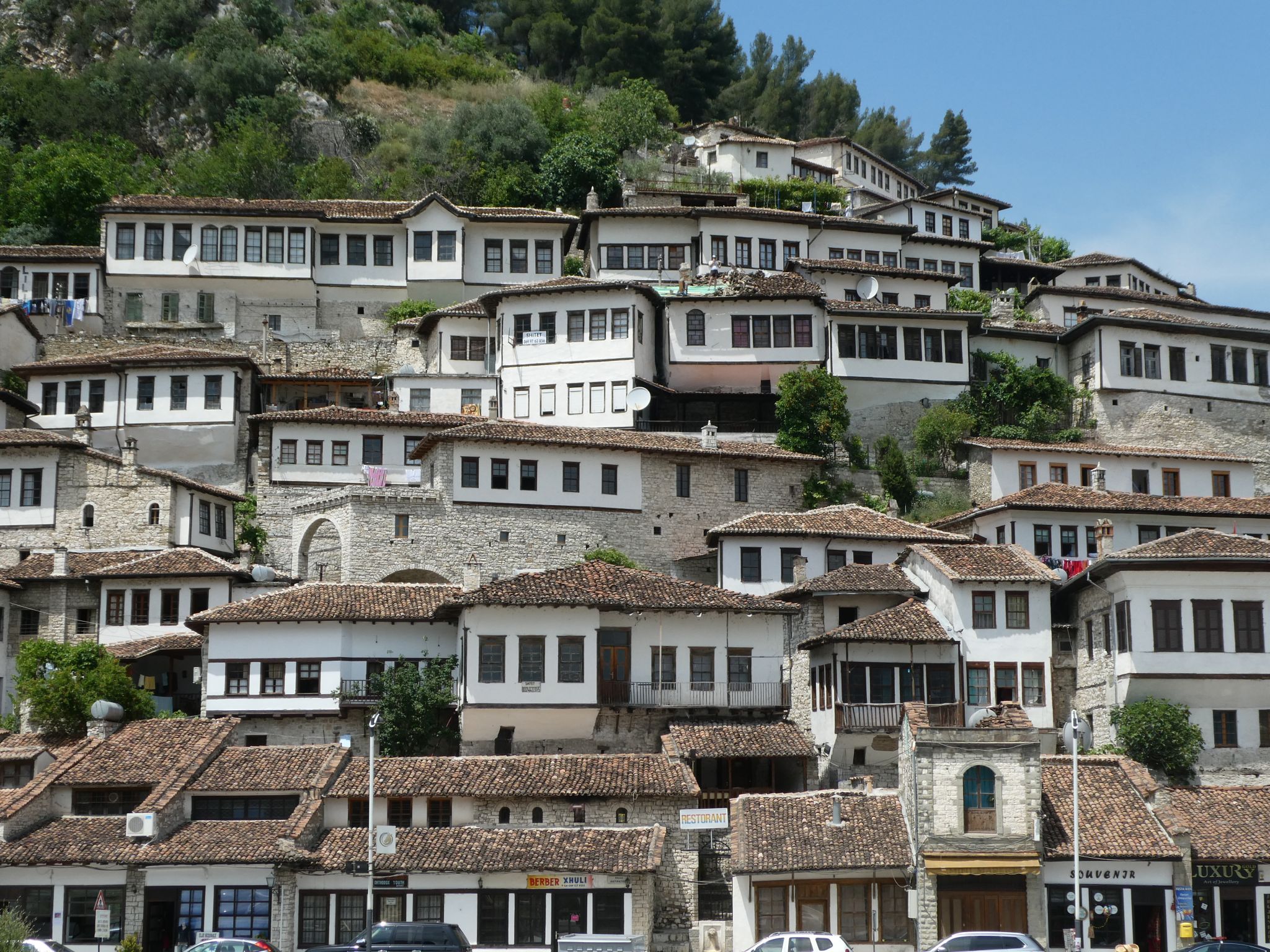 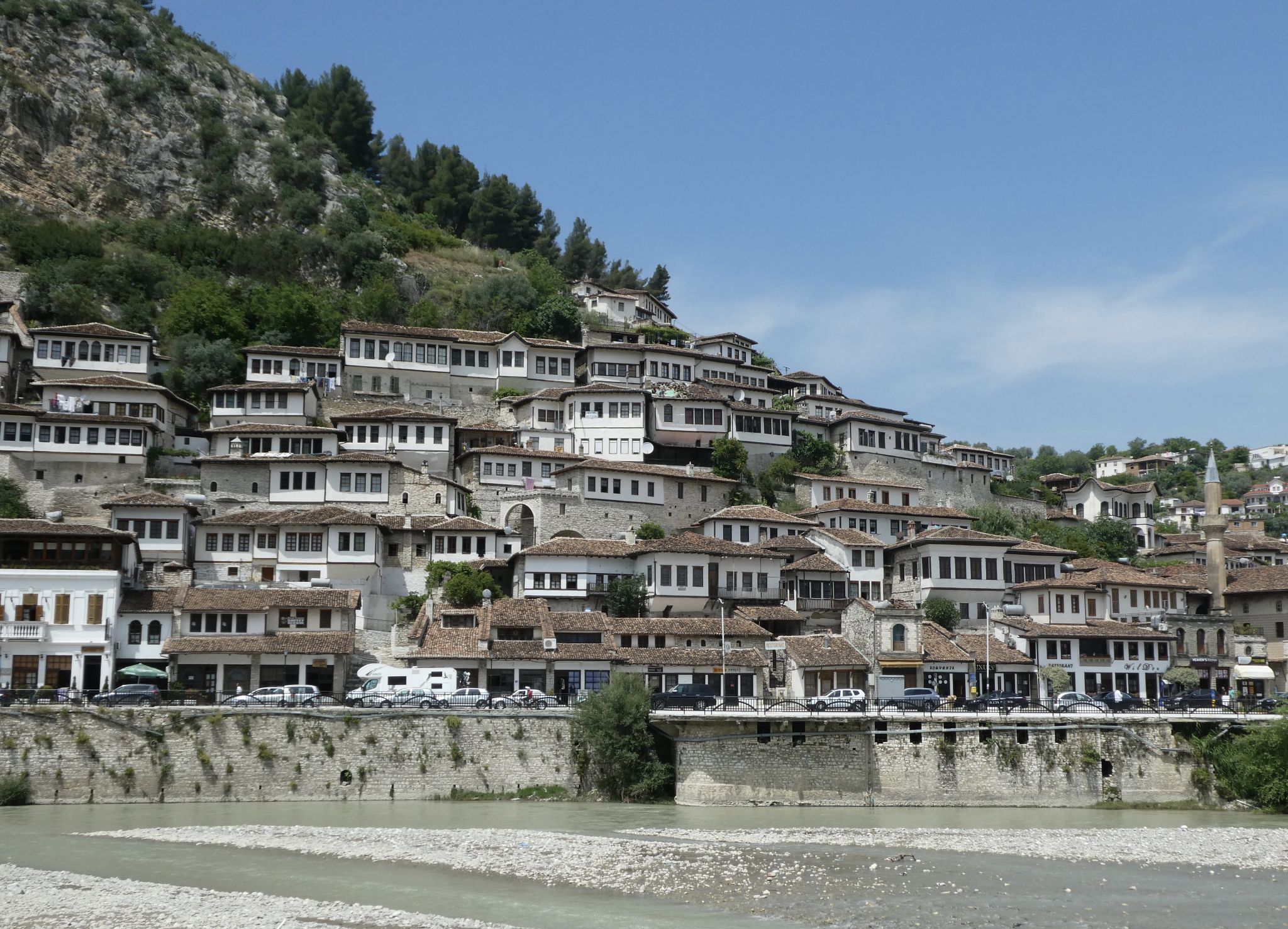 Everything is steep and it seems even the trees are confused as to which way is up. 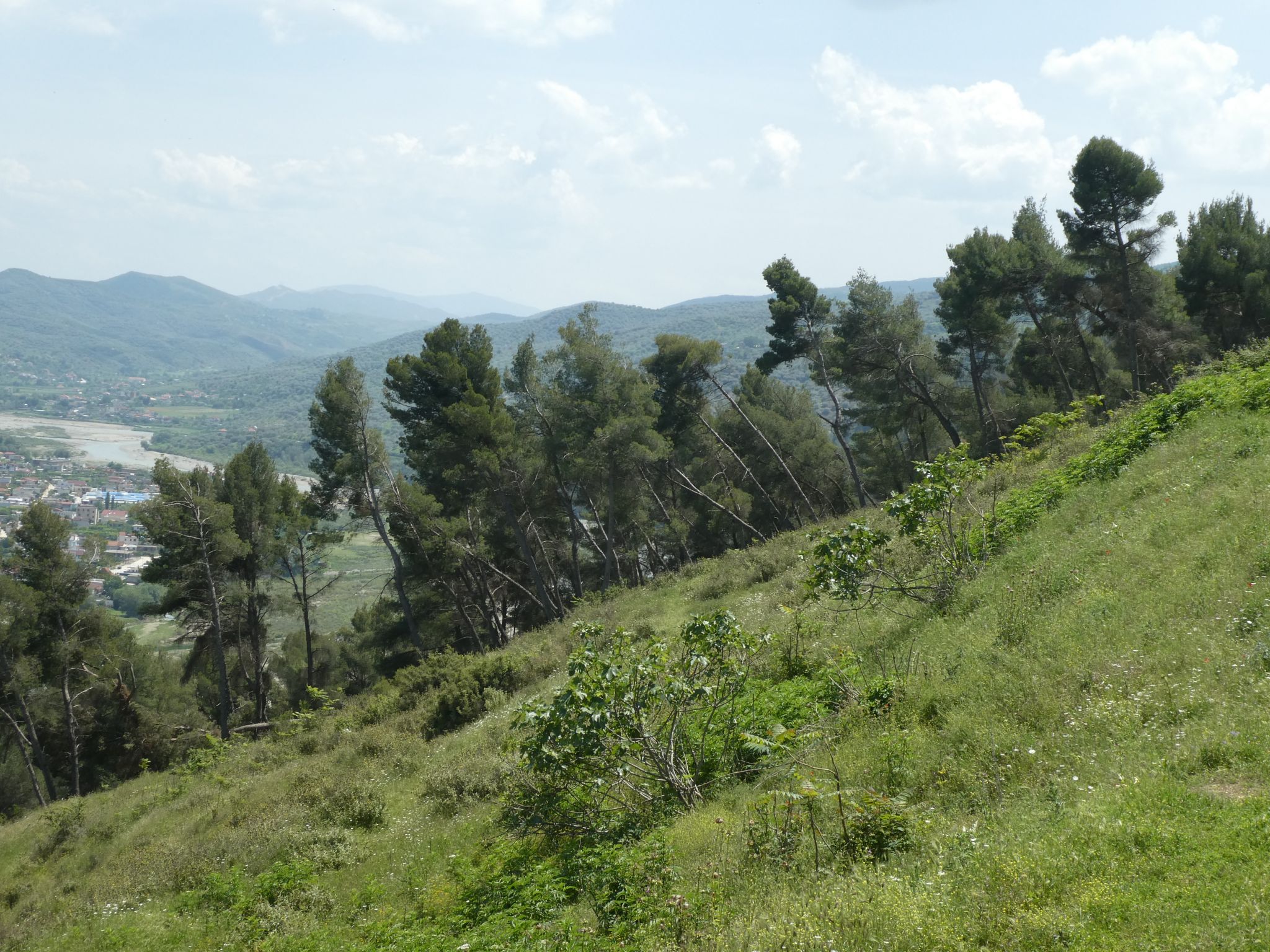 The houses of Mangalem climb up the hill to almost meet the Kala (castle fortress) on the top.  Many towns have the remnants of a castle or fort, but the one in Berat is unusual in that it is still a real community.  People still live and work here, or live here and work down in town. 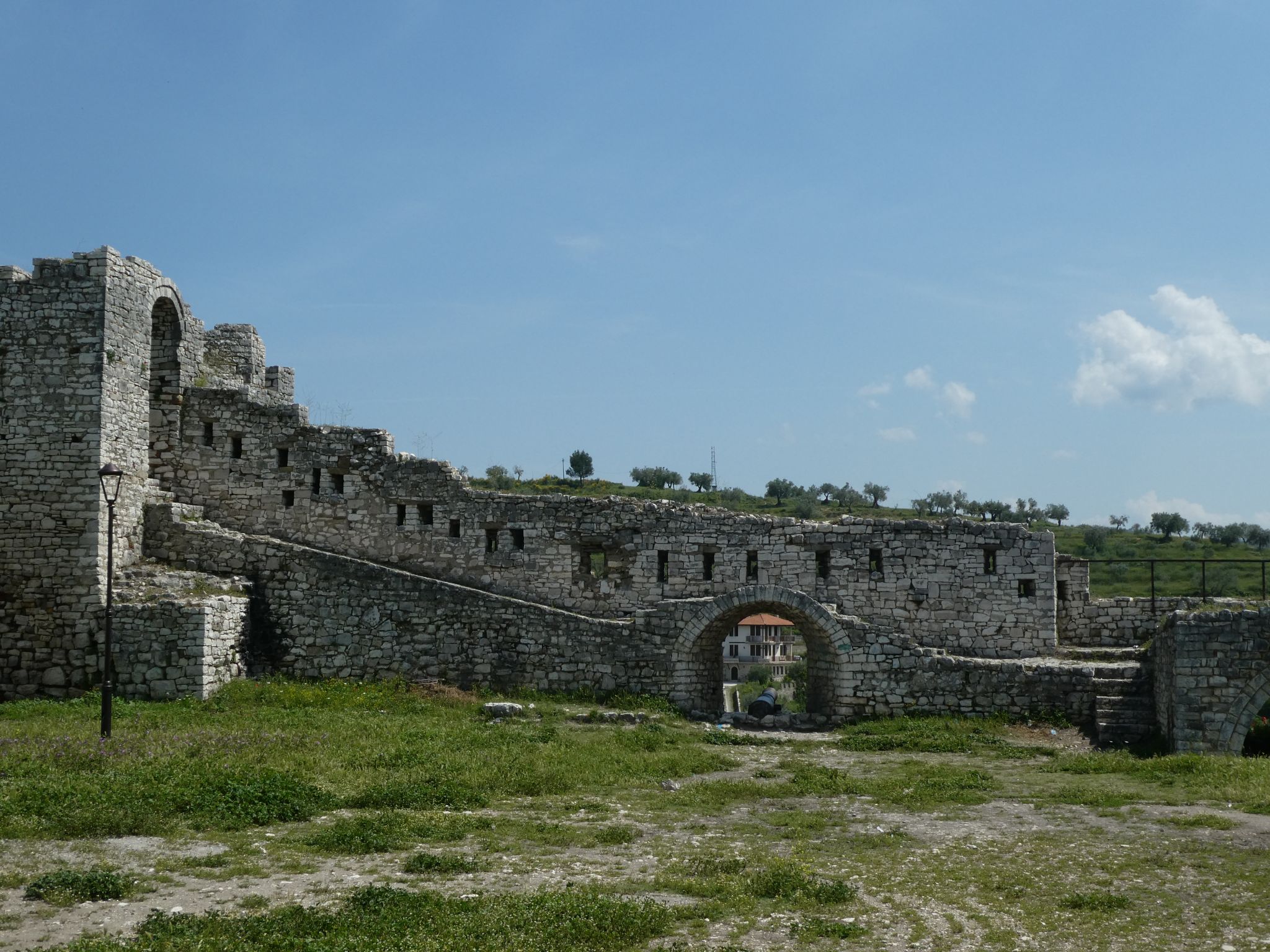 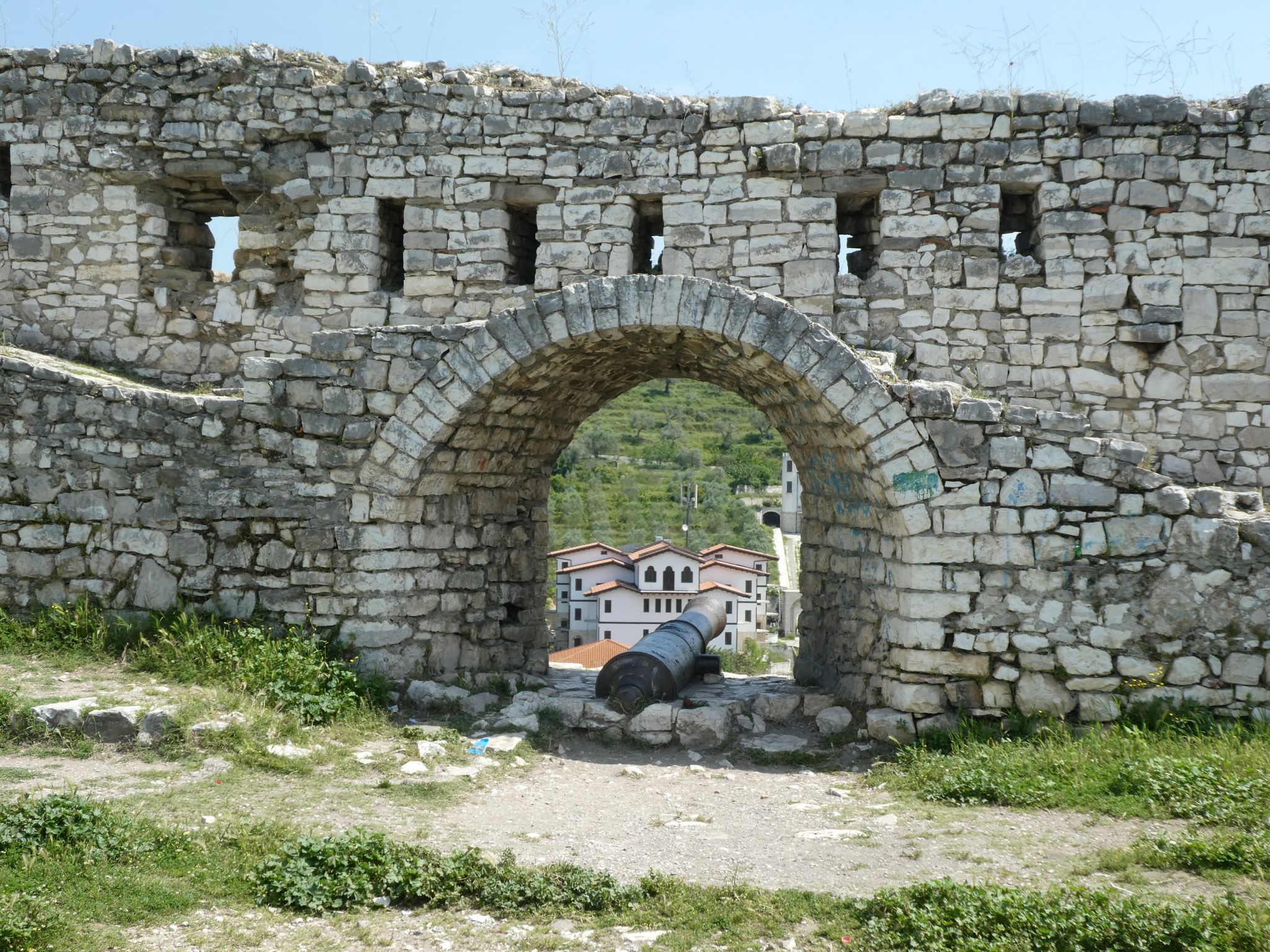 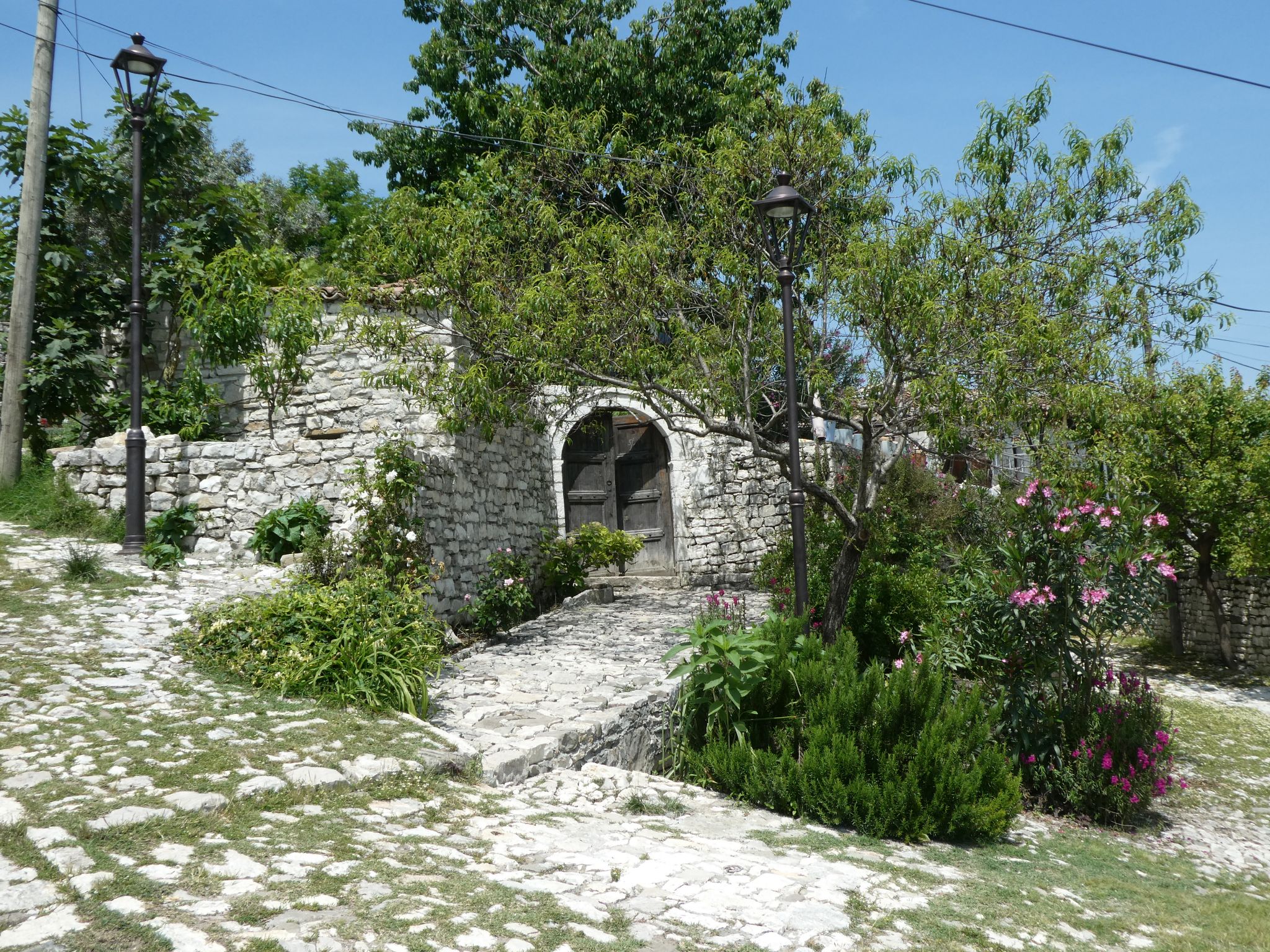 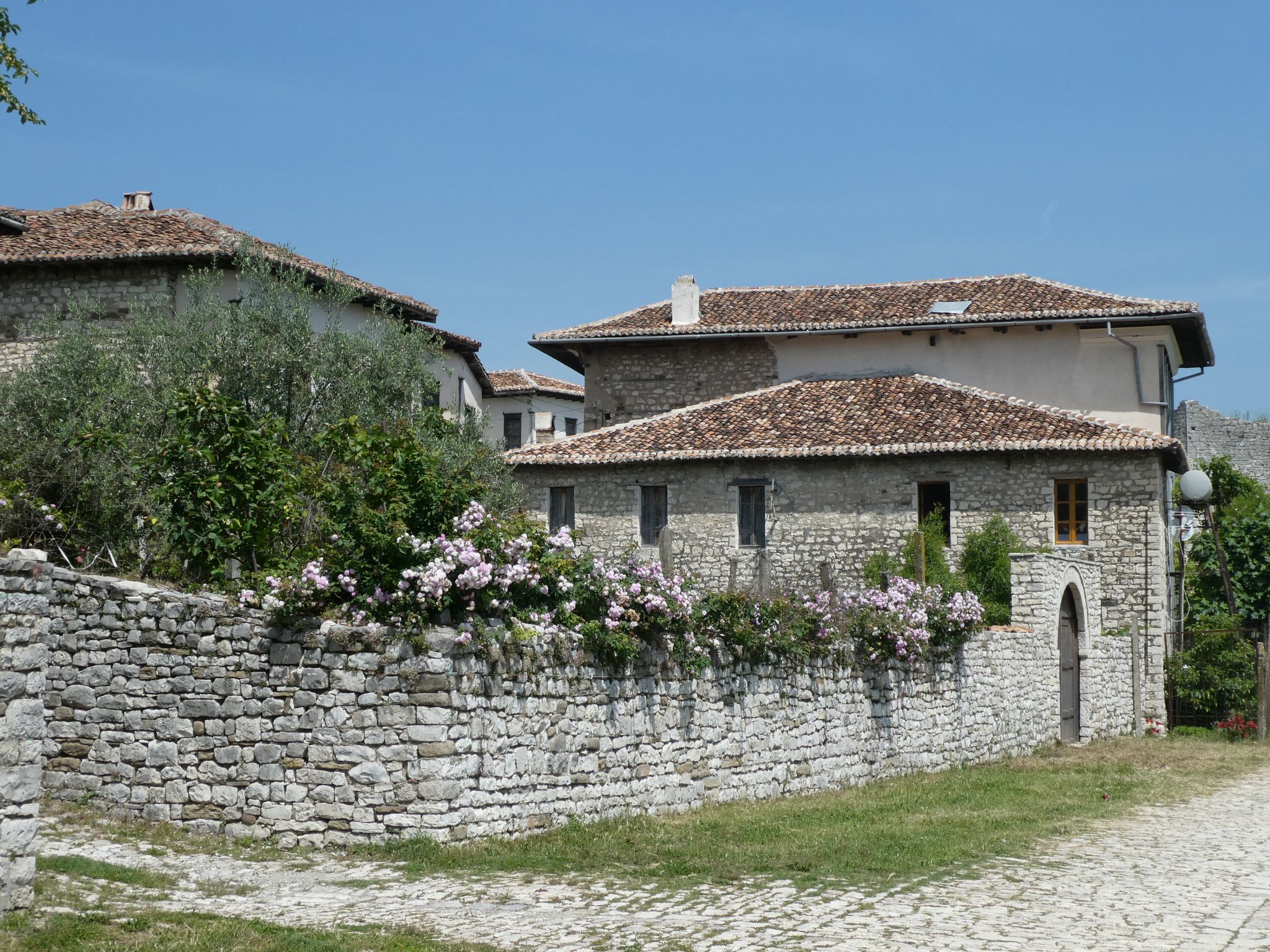 There are several historic churches in the community inside the fort, and this one just outside the Kala walls.  Even in Ottoman times, the churches got some prime real estate. 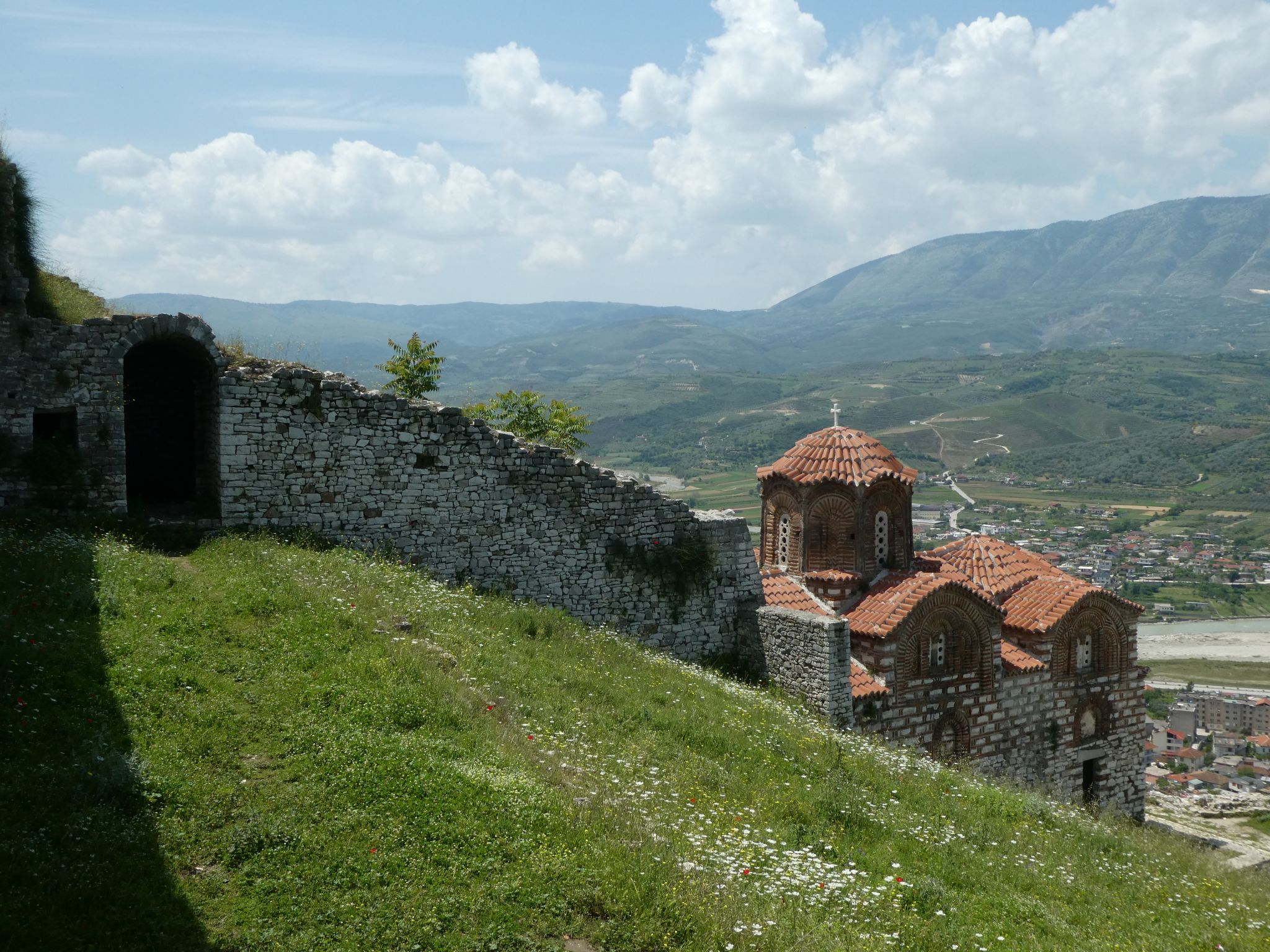 The climb up is steep but the reward is the opportunity to wind your way through Mangalem and of course the views from the top, including a really unusual perspective on Gorica, the neighbourhood across the Osumi River from Mangalem. 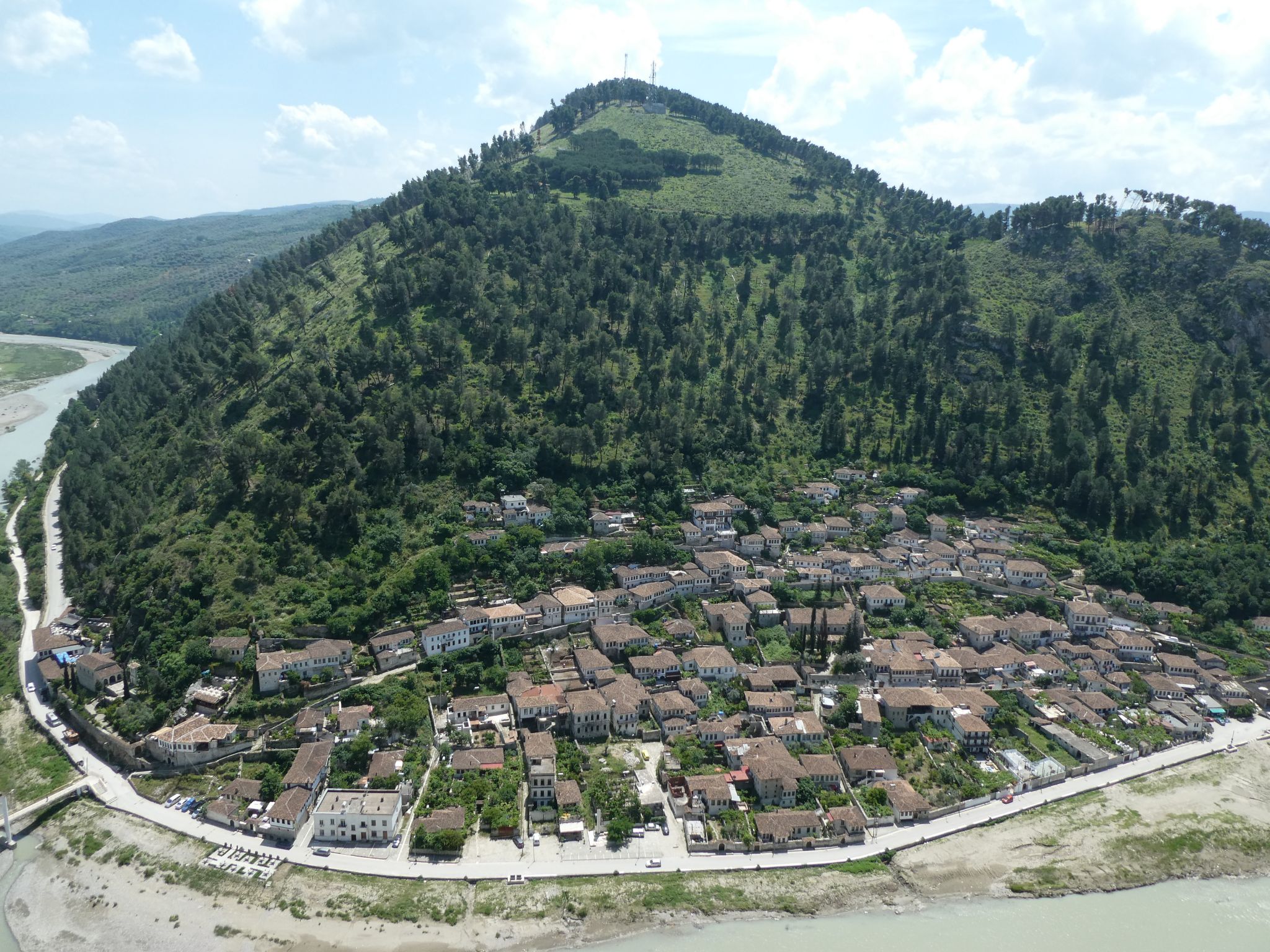 Berat is a laid back town.  It is built along the Osumi River and there is a pleasant pedestrian promenade along the river with many cafes and restaurants, but the town is surprisingly calm and relatively tourist-free.

We stayed in a hotel in an original Ottoman house in the Mangalem neighbourhood which was convenient to everything and had a tiny balcony from which we could watch the fit and the not so fit clamber up the cobblestone streets viewing the old houses.

And in one of those priceless travel experiences you can’t plan for, down the lane behind our hotel was a tiny restaurant named after it’s proprietor Lili, with just five tables in the courtyard of his family home.  The effervescent, unstoppable Lili serves tables while his wife cooks meals.  The food is simple, traditional Albanian fare which Lili ensures you wash down with liberal quantities of wine and rakija both made by his father.

We ate there on our second night, after being unable to get a table on our first night.  It capped off an enjoyable stay in Berat.  Next stop, Tirana.