Lake Ohrid is the Balkans’ deepest lake.  It is one of the oldest continuously surviving lakes on the planet.  Most lakes fill up with sediment and disappear within about 100,000 years.  Lake Ohrid, like Lake Baikal in Russia and Lake Tanganyika in Africa, is a tectonic plate formation dating to some 5 million years ago.  Unless you are a creationist, of course.

Apart from all the nerdy science stuff, Lake Ohrid is also Macedonia’s premier tourist destination.  Even so, on the cusp of the summer season, we found it peaceful and relaxing. Indeed, we arrived intending to spend three nights here but ended up staying five, which is longer than we’ve spent in one place since leaving Australia four months ago.

We’d read that the Old Town can be noisy at night, with bars that pump until the small hours of the morning, so we booked a hotel further around the lake.  It caught our eye because the room had a jacuzzi and the decor was funky.

When we checked in, we also noted some other unusual features – the shower played music and had all sorts of, ahem, unusually located jets, the front door had a key pad entry – we wondered if the hotel had enjoyed a rather different function in its earlier life. 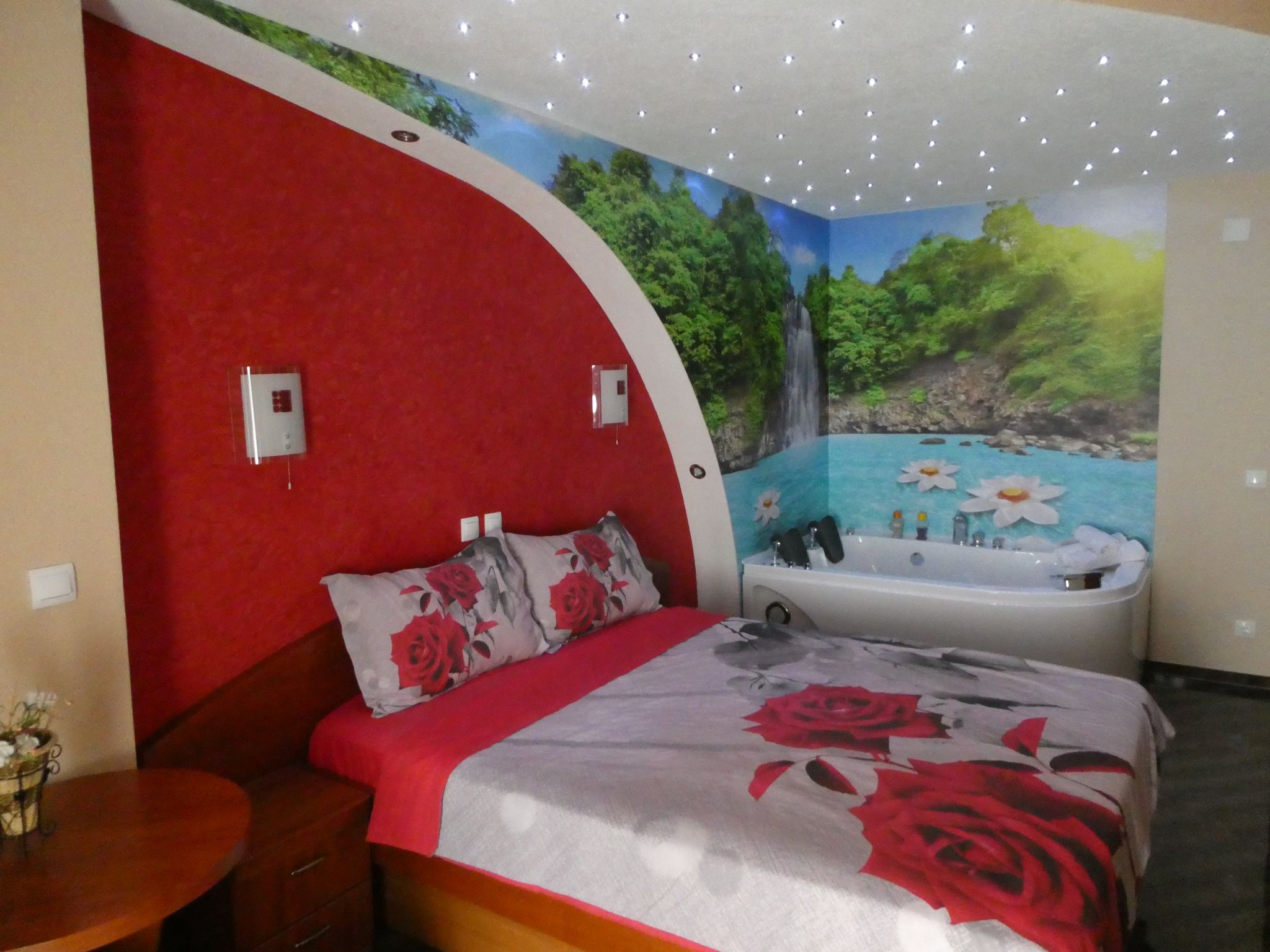 A long promenade runs around the lake foreshore, perfect for afternoon strolling, and the Old Town tumbles down the hill to the lake. 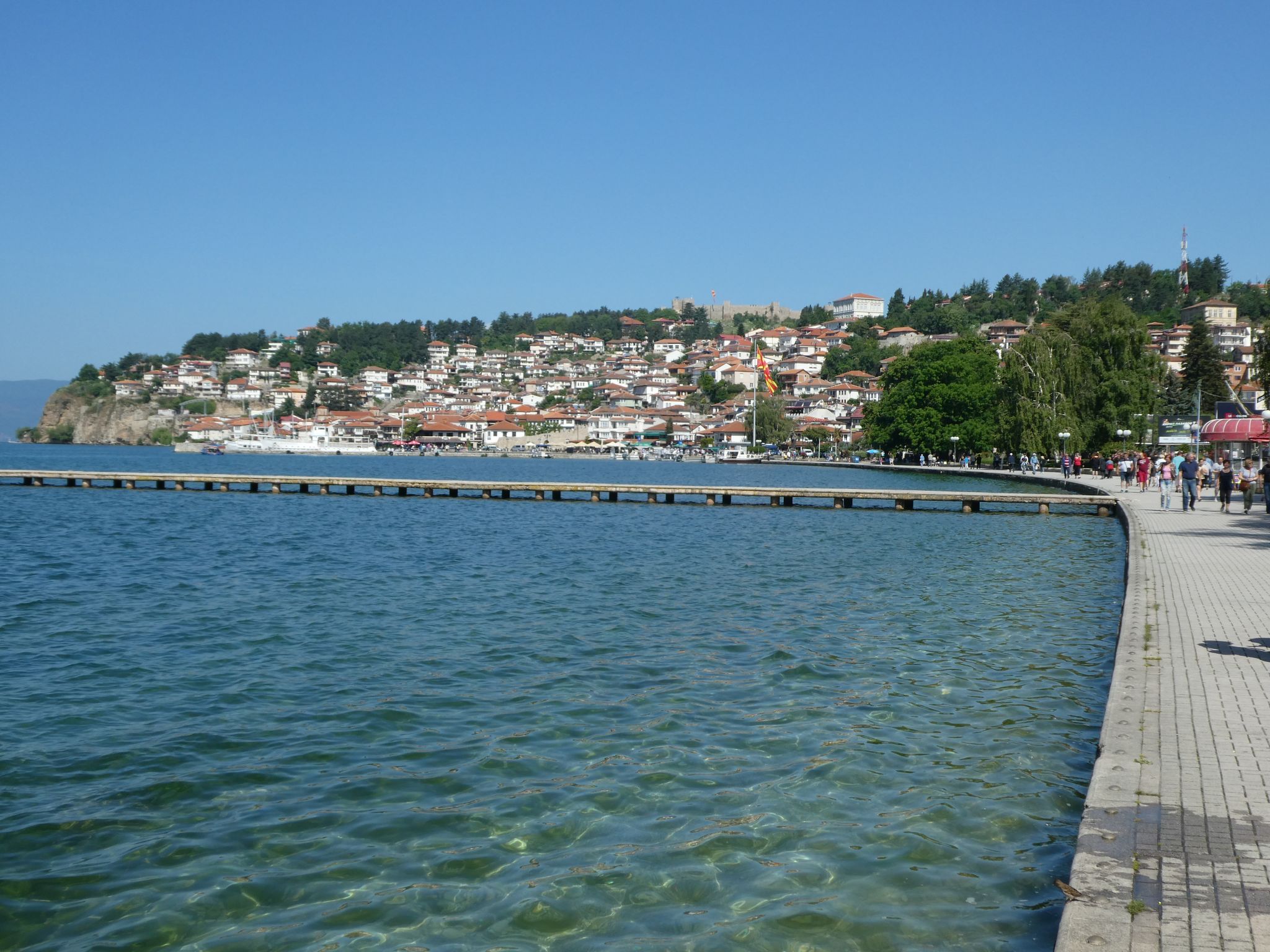 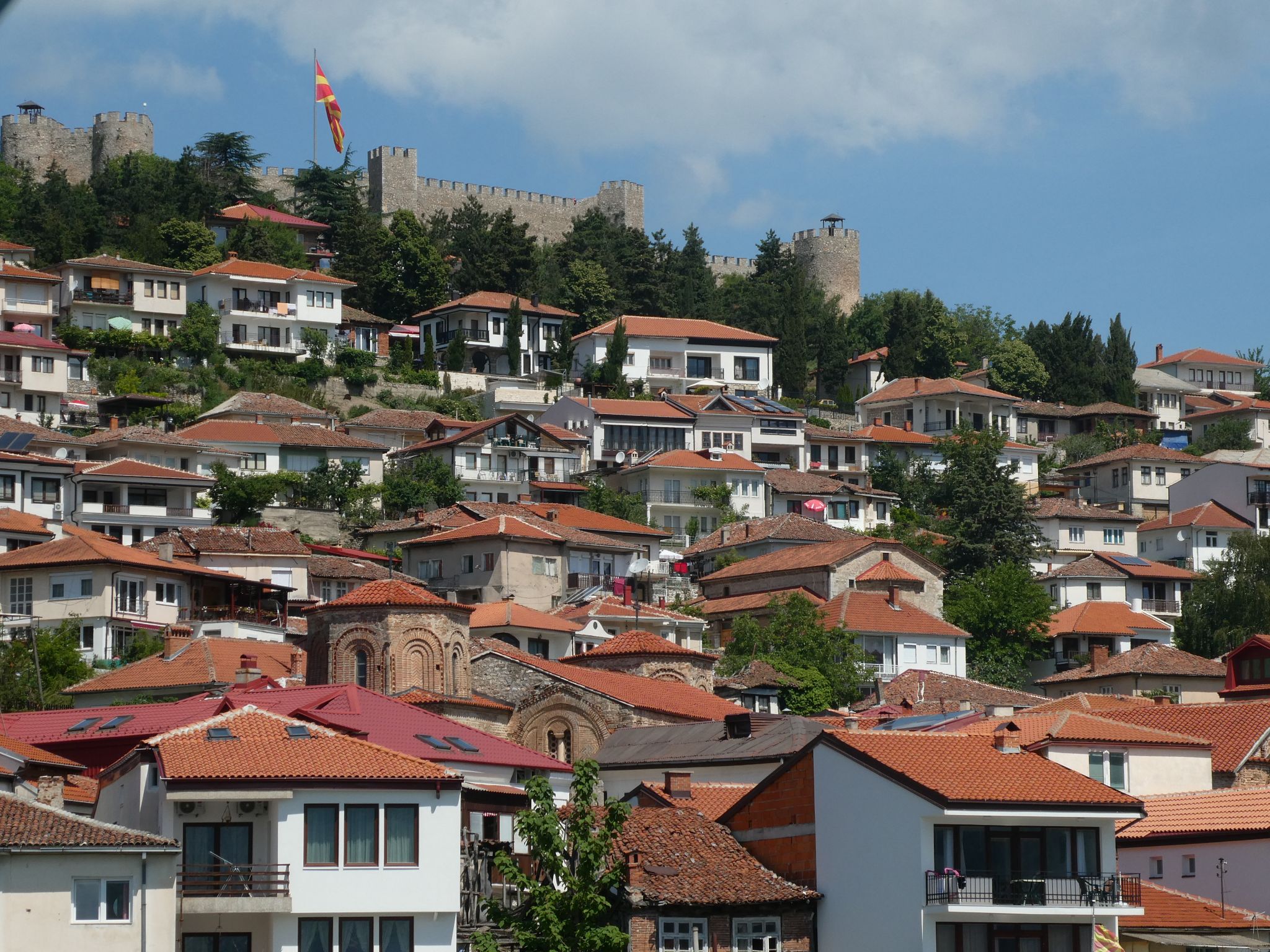 The Old Town is compact, with cobbled streets, old houses and a preponderance of orthodox churches.  In the beautiful Sveti Sofija Cathedral there was a tour group whose leader was shouting information at top volume.  We waited for him to finish and once they all shuffled out after him, the silence revealed the beauty of the place.  Then a couple of young fellows began to play incredibly complex classical pieces on a baby grand  piano and the acoustics were amazing.  We sat and sat, enjoying the concert. 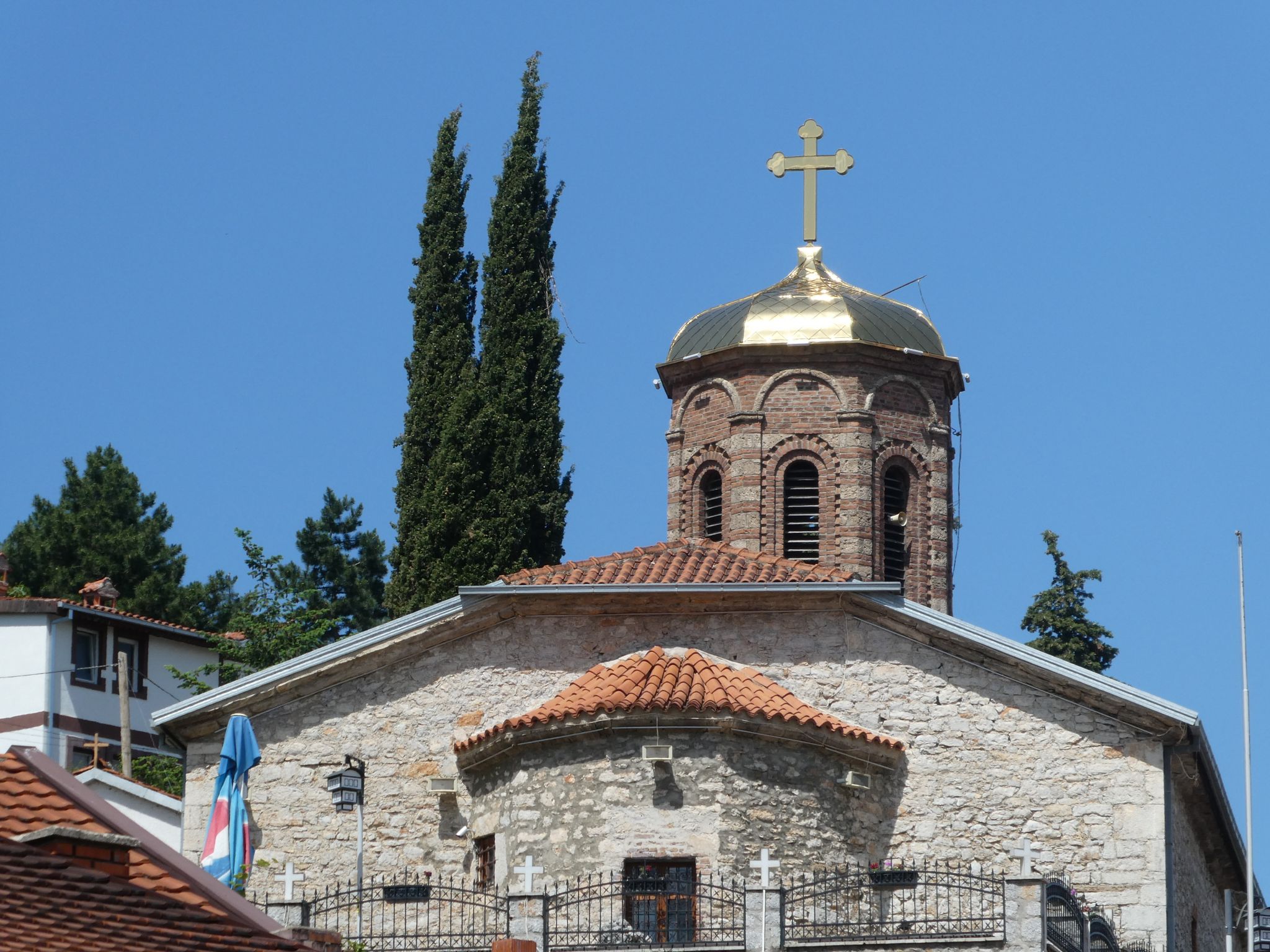 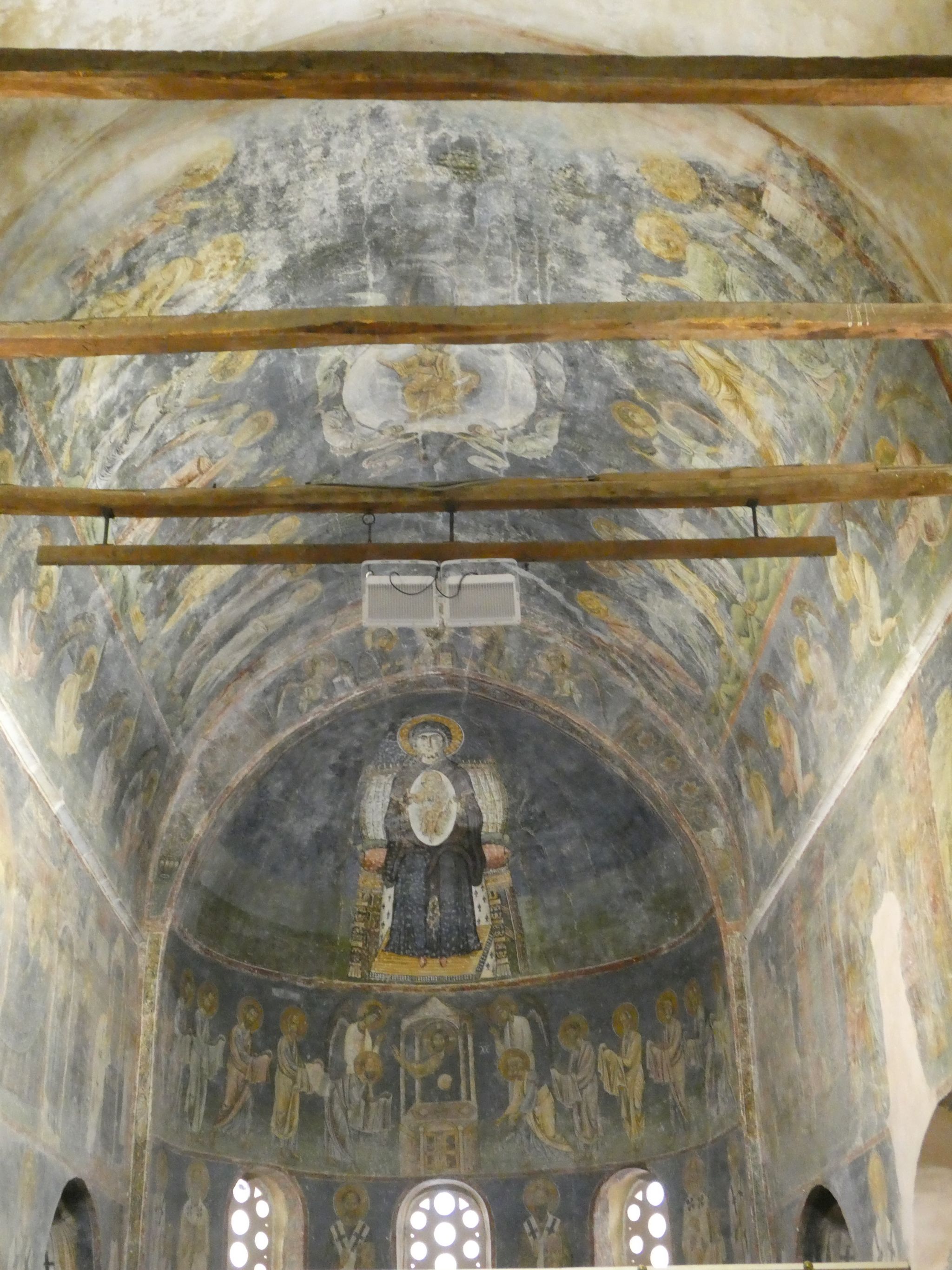 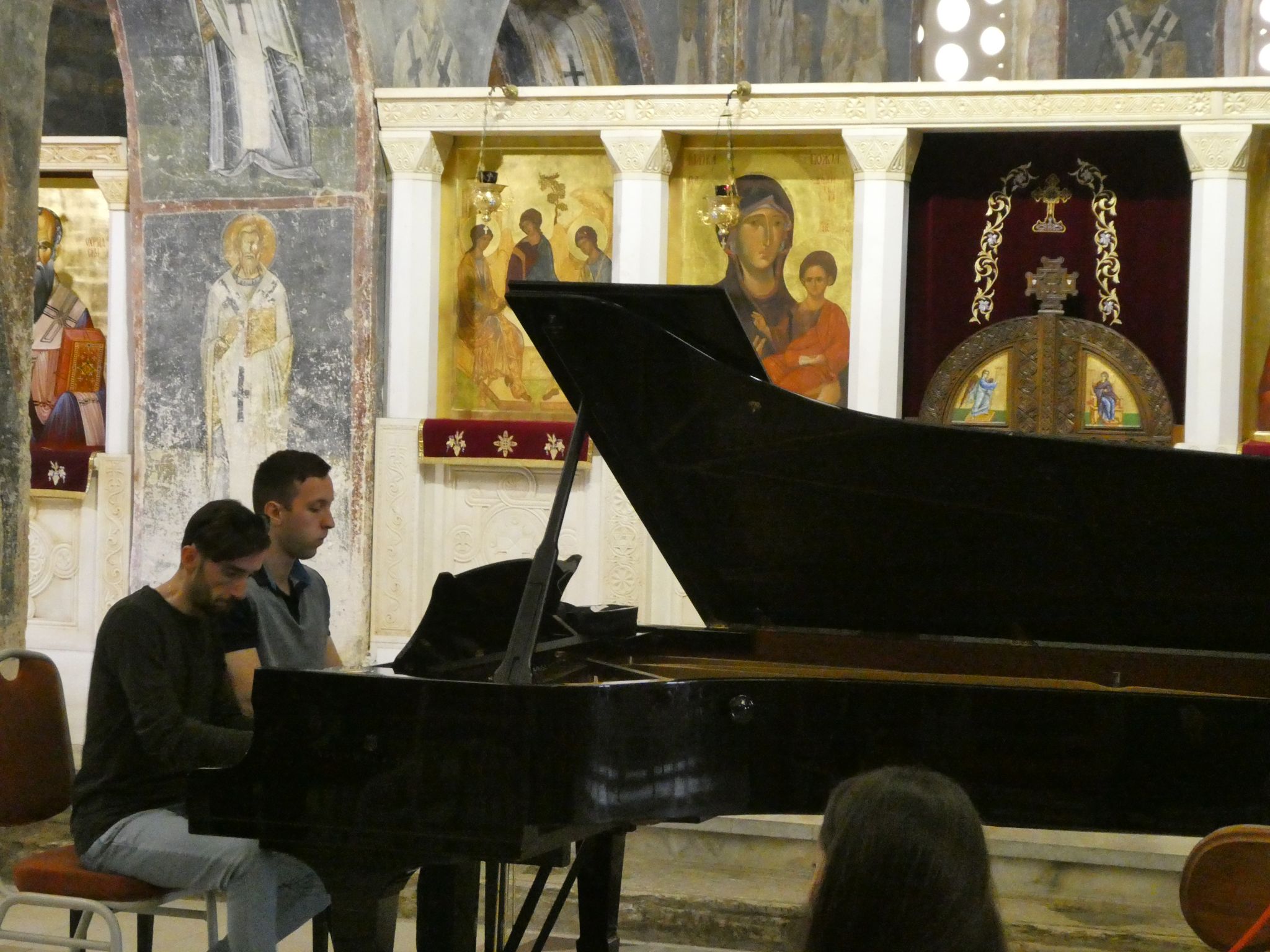 There are also two 14th century churches which were used as quarantine centres during times of plague when all arrivals were required to undergo a 40 day isolation period before being permitted to enter the city. 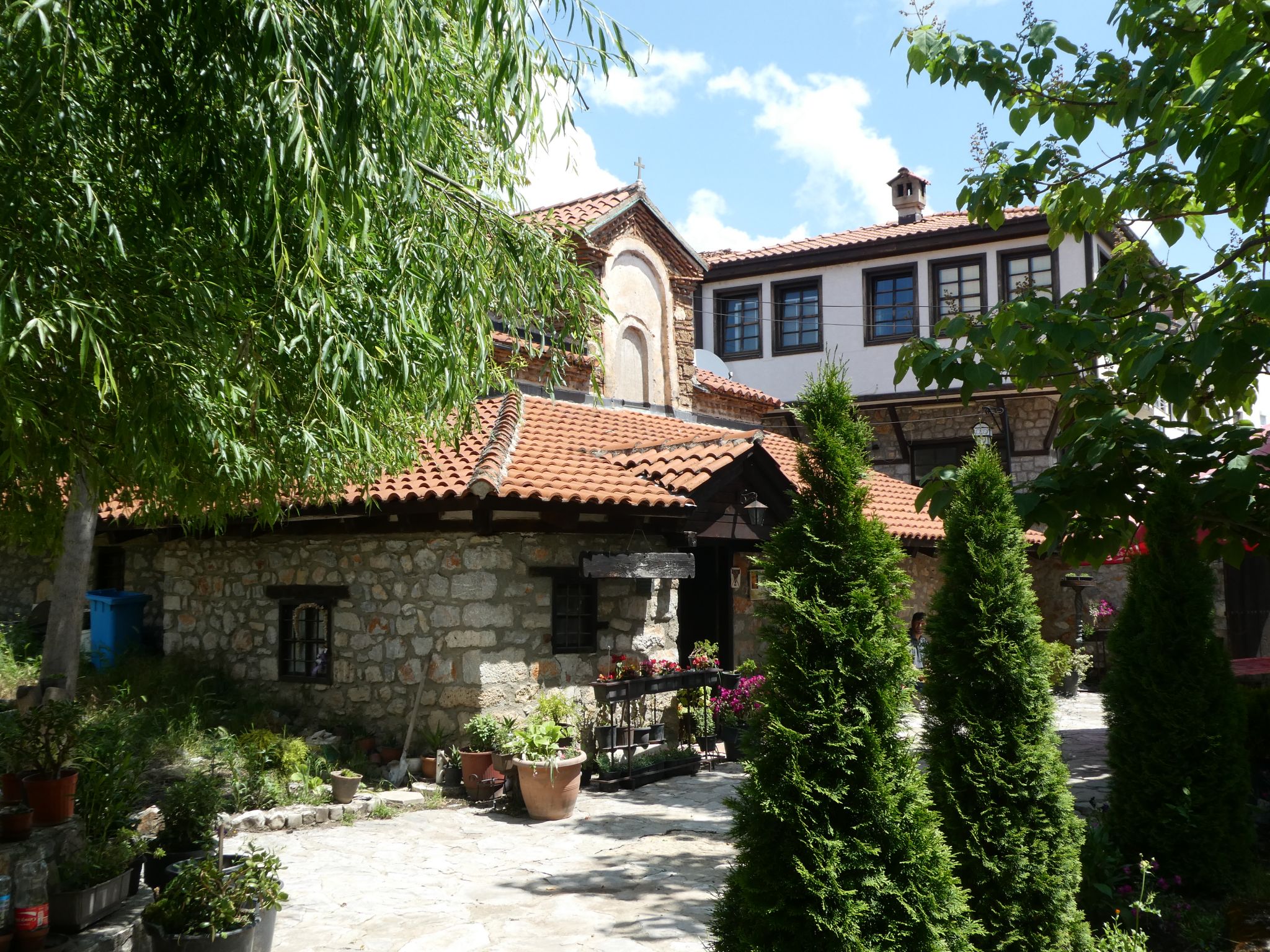 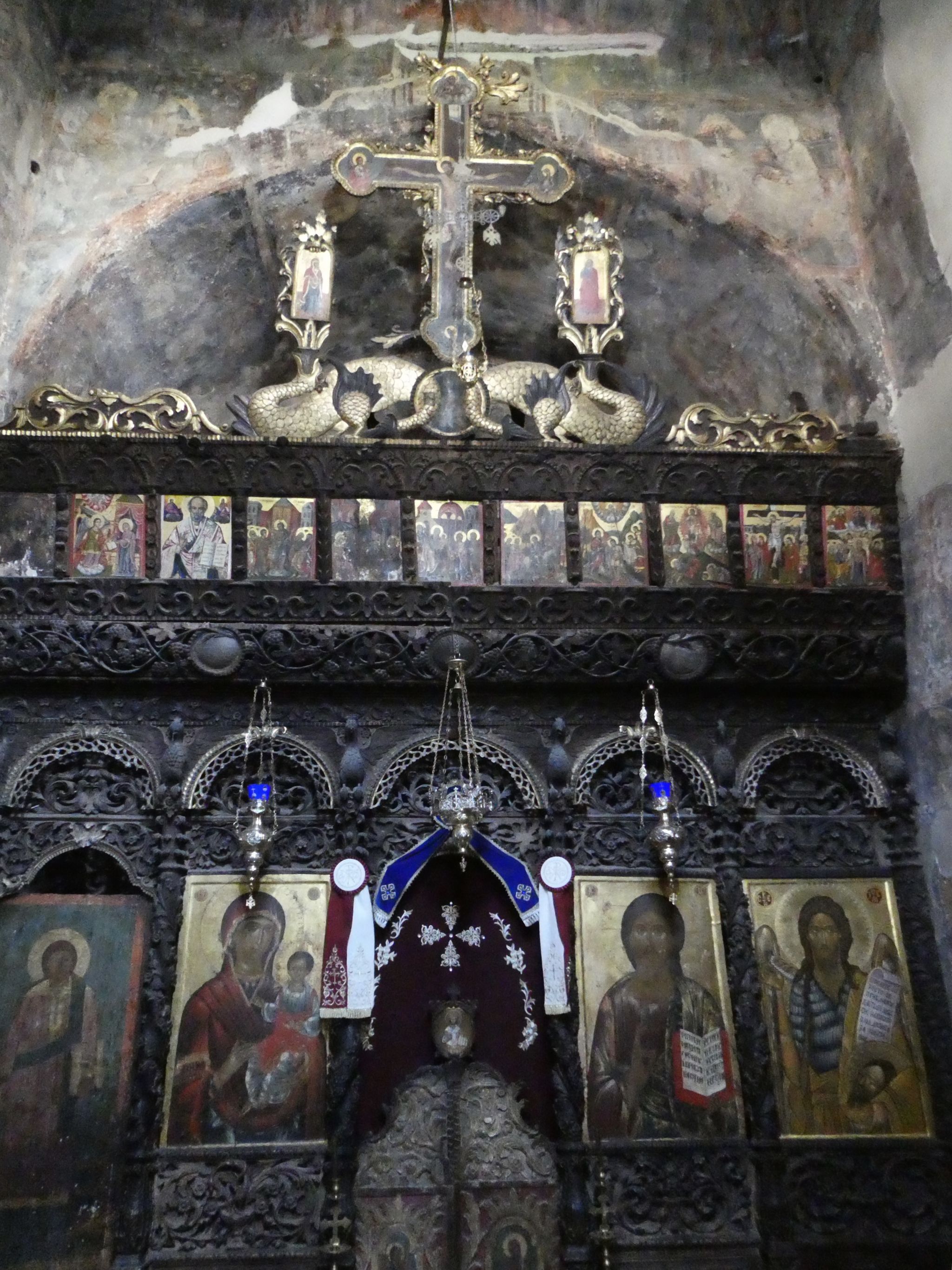 A boardwalk/footpath follows the shore around past some prime restaurant locations to a tiny lakefront chapel tucked into the bank. 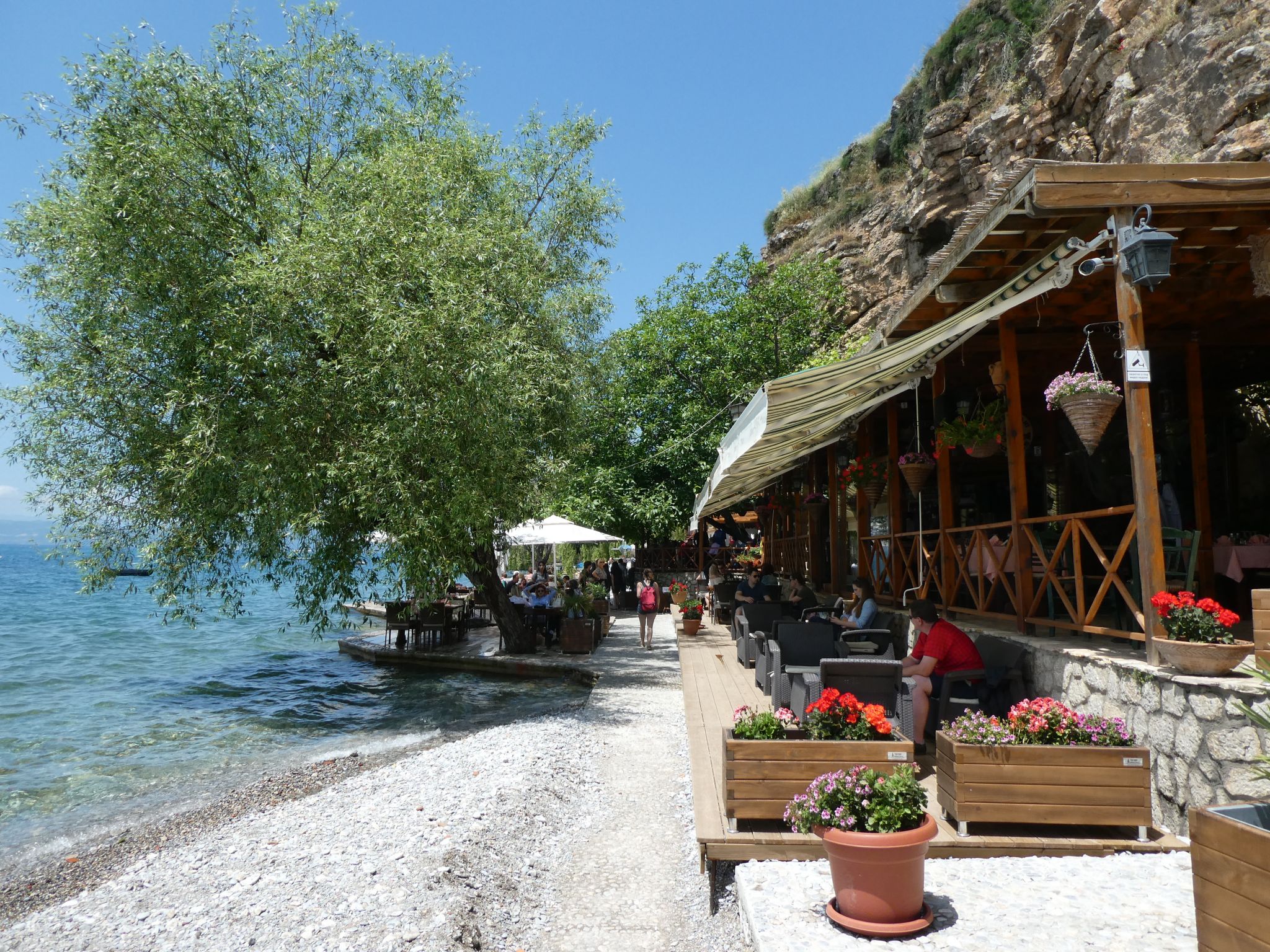 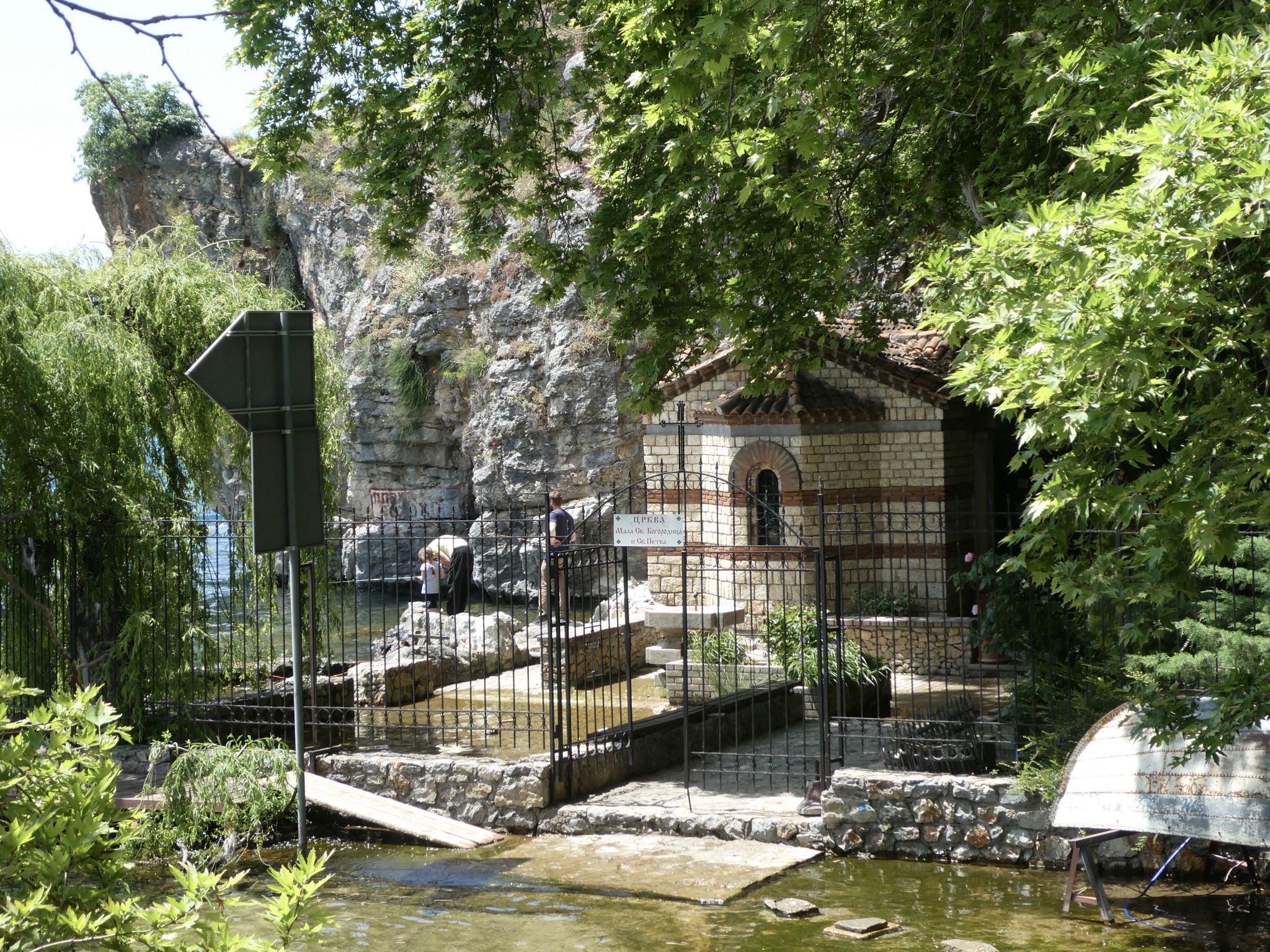 On the cliff above the chapel is the Church of Sveti Jovan at Kaneo, a 13th century Orthodox Church. 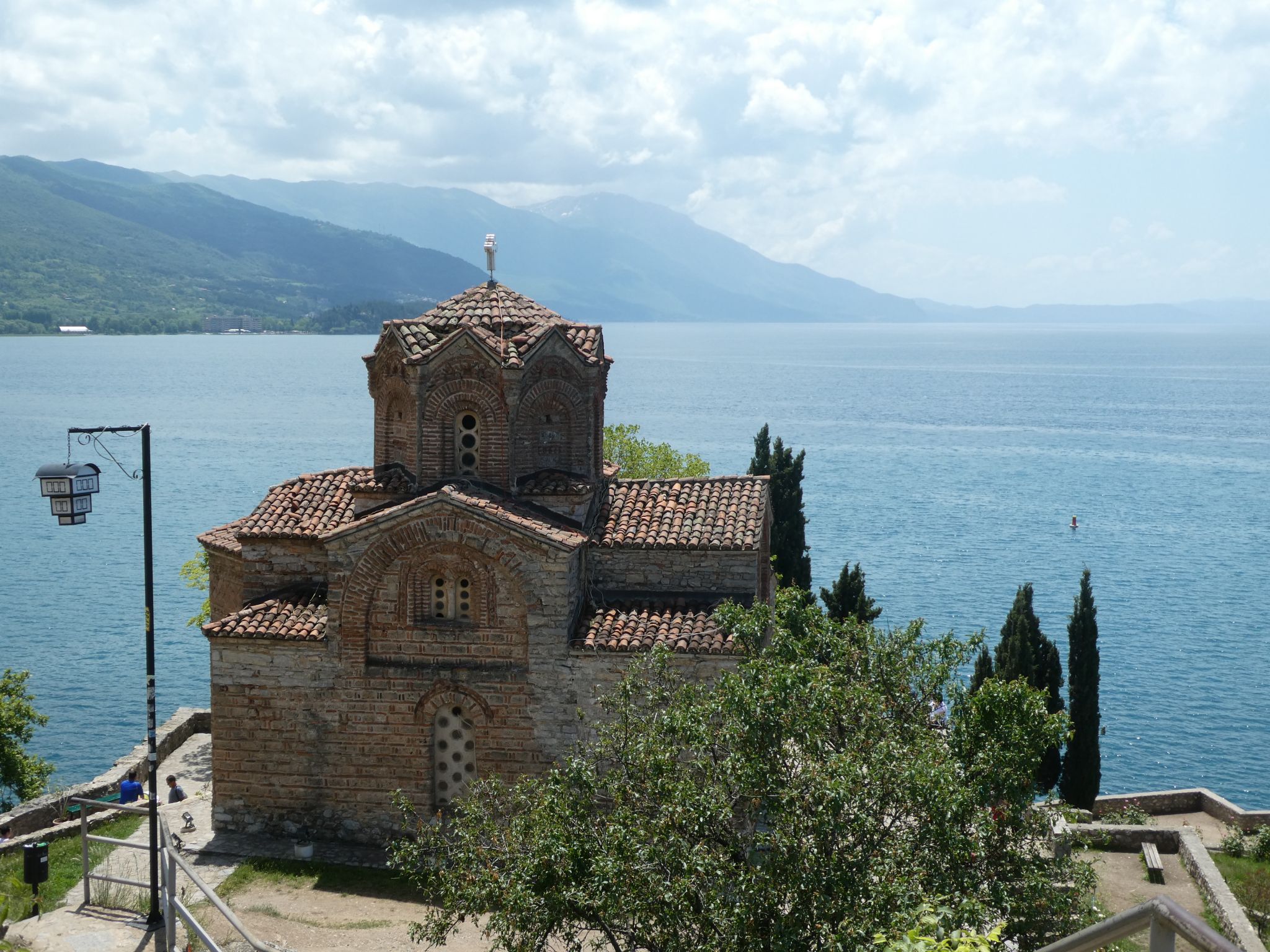 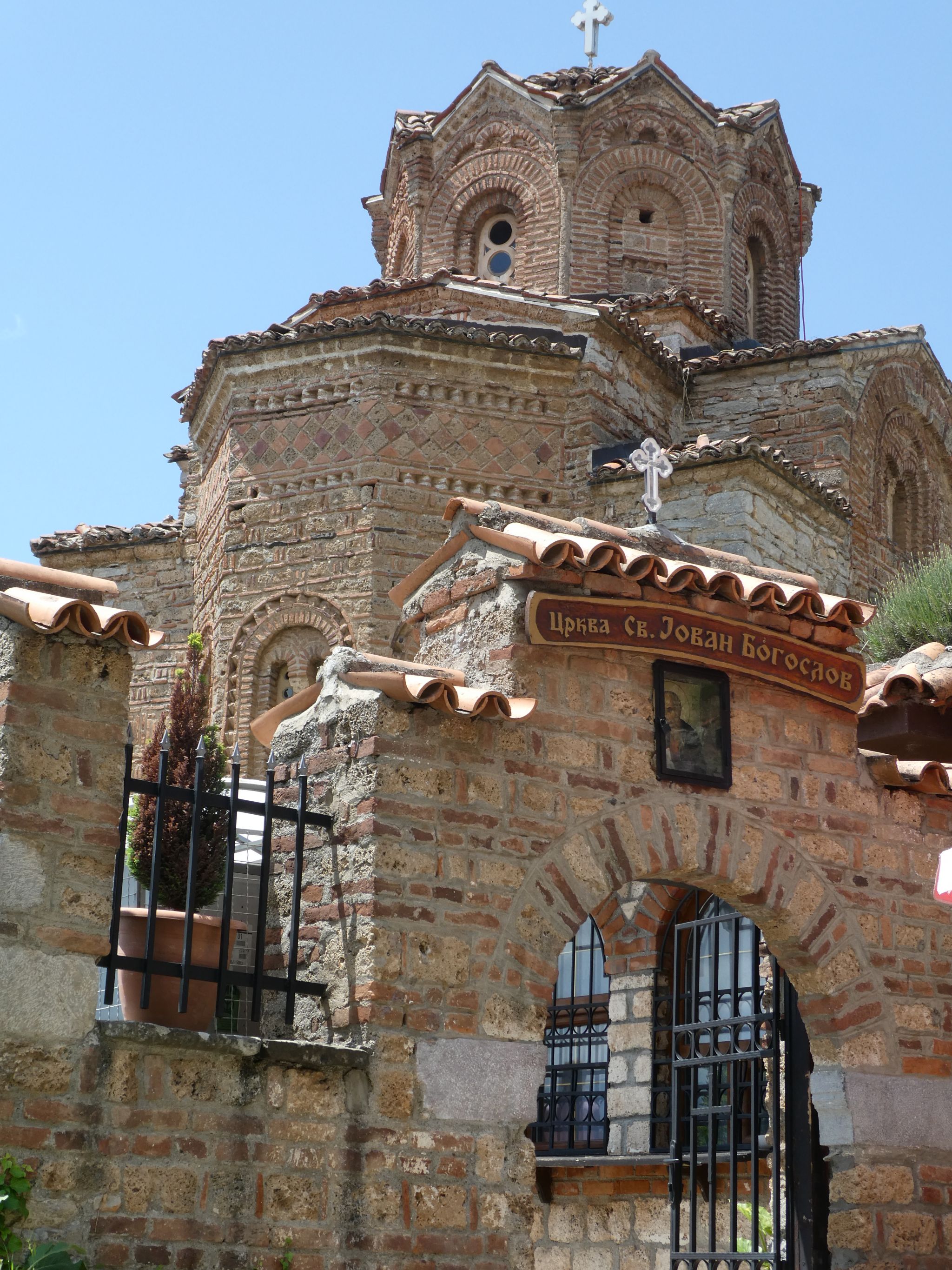 From the church, a forest path leads up to Plaosnik, home of the Church of Sveti Kliment of Pantelejmon. 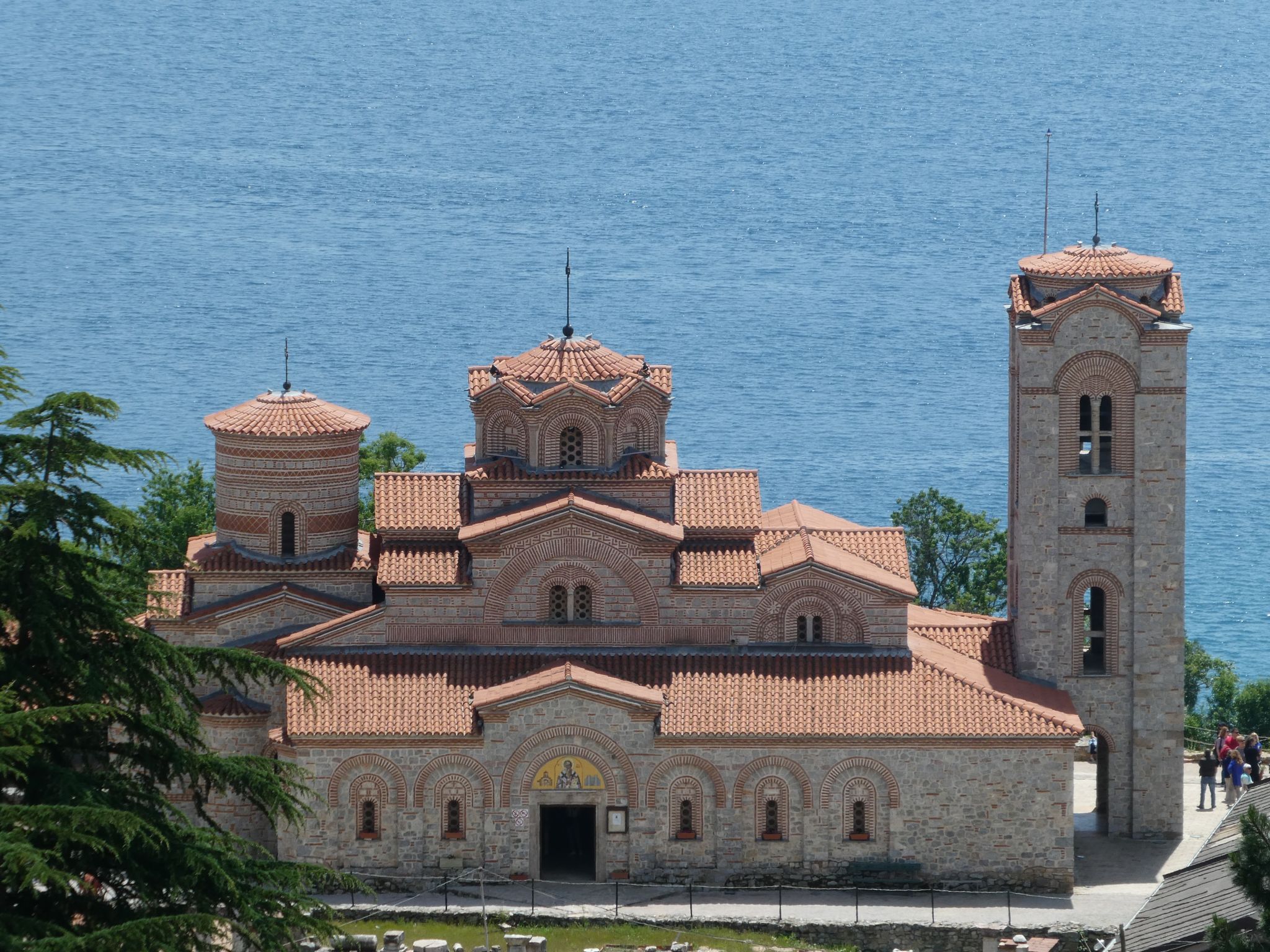 From here, a further trail leads to Car Samoil Fortress, the city’s 10th century castle built during the period of Bulgarian monarchical reign.  All that now remains is the walls but it is possible to walk the ramparts, which afford great views over the town.

John had had his fill of monasteries by this stage but Julie does love a good icon museum, so we ducked into the grounds of the Church of the Holy Mother of God Peribleptos – no, we did not make that up – so Julie could visit the icon gallery while John sunned himself on the lawn.  Really???? How could you not love this stuff. 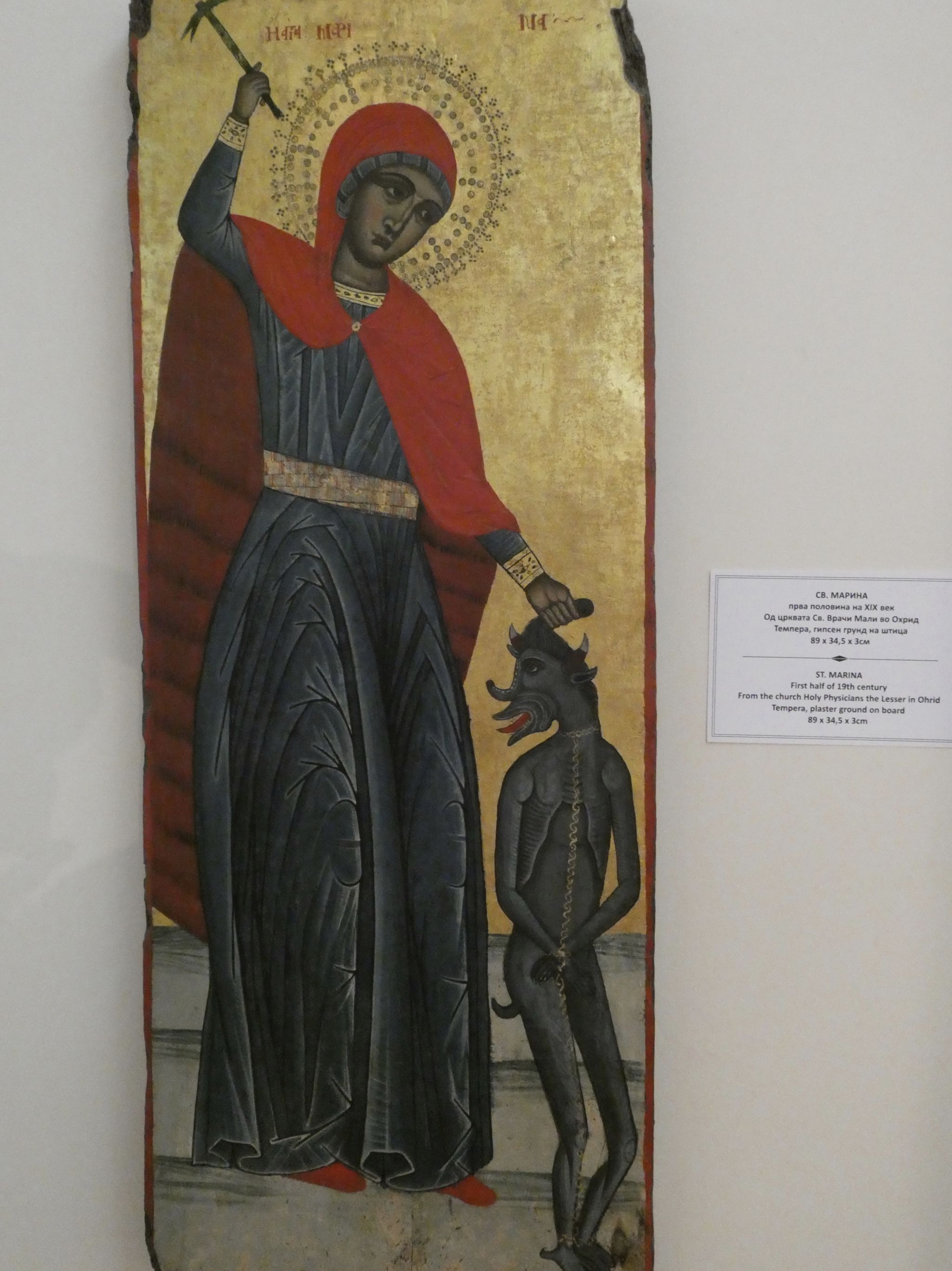 Boat operators offer a range of trips on Lake Ohrid.  We took a one day trip which motored down the lake past several small villages where fishing and recreation are the main activities. 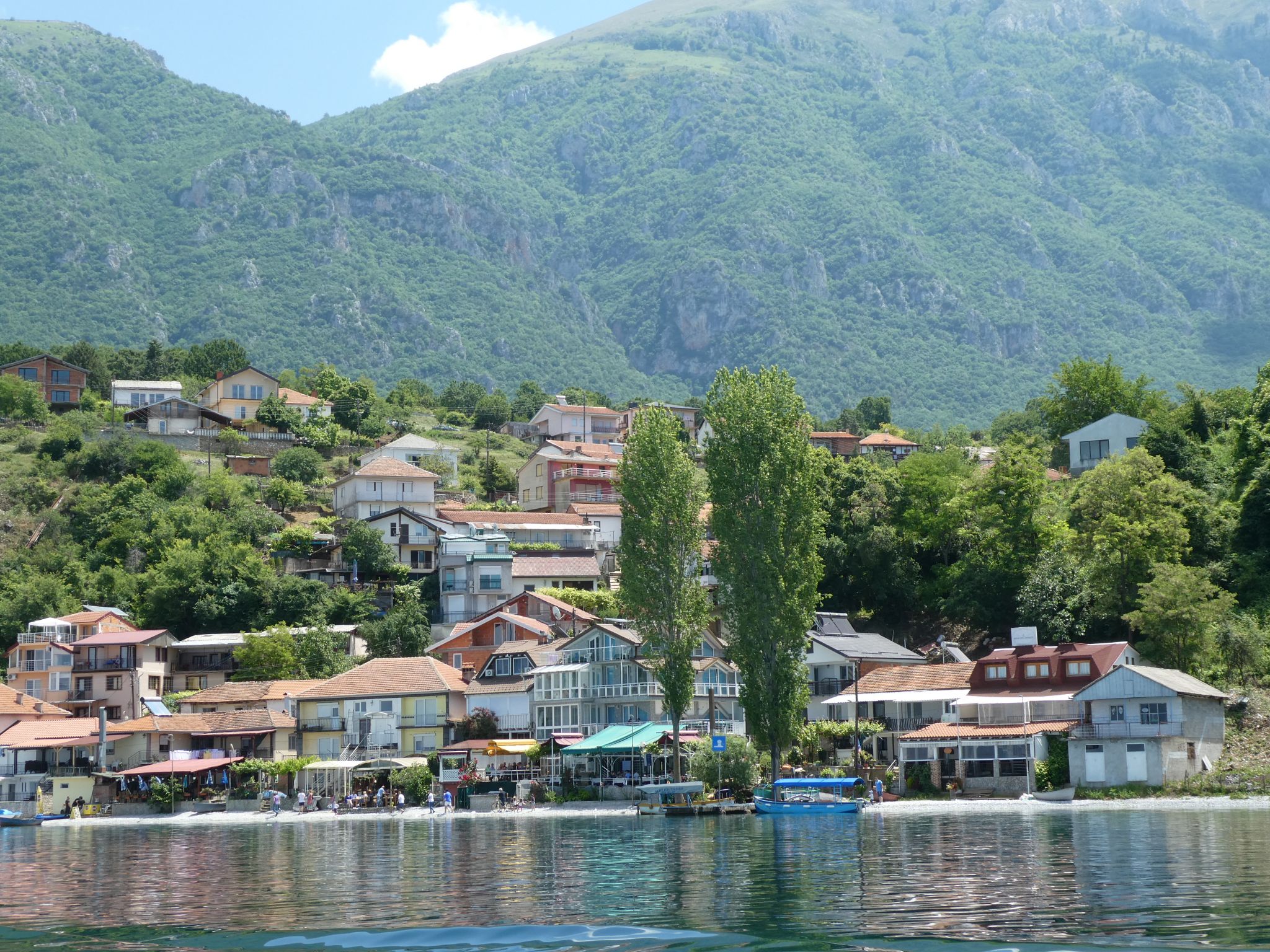 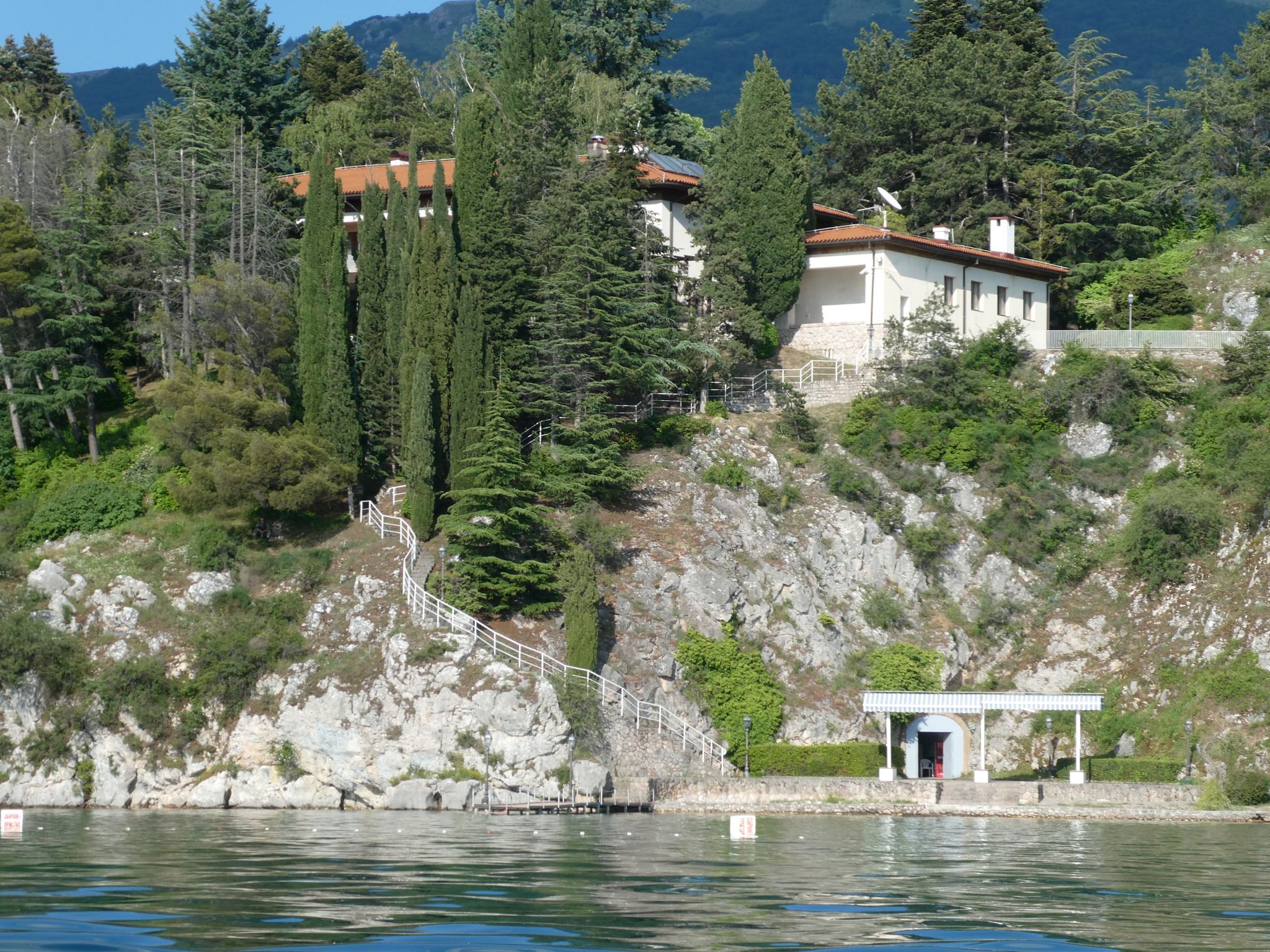 We stopped off at some more lakeside churches. 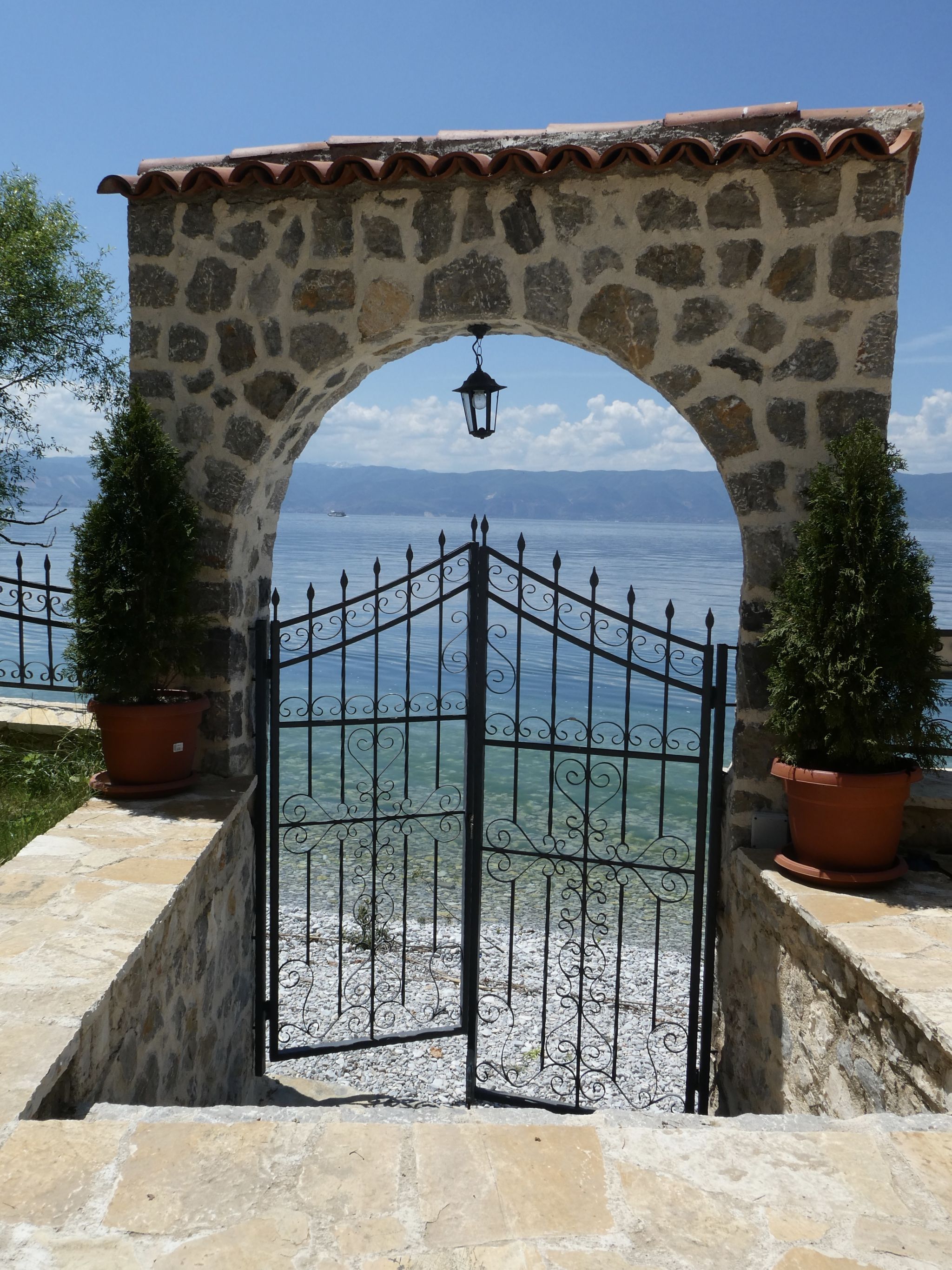 The boat made a longer stop at the very interesting Museum on Water – Bay of the Bones.  This is the site of a prehistoric settlement built on platforms supported by around 10,000 wooden piles driven into the lake bed.  The site has been carefully excavated and the Museum is a reconstruction of what the archeologists believe the settlement looked like between 1200 and 400 BC.  Resort bures of Bora Bora these were not! 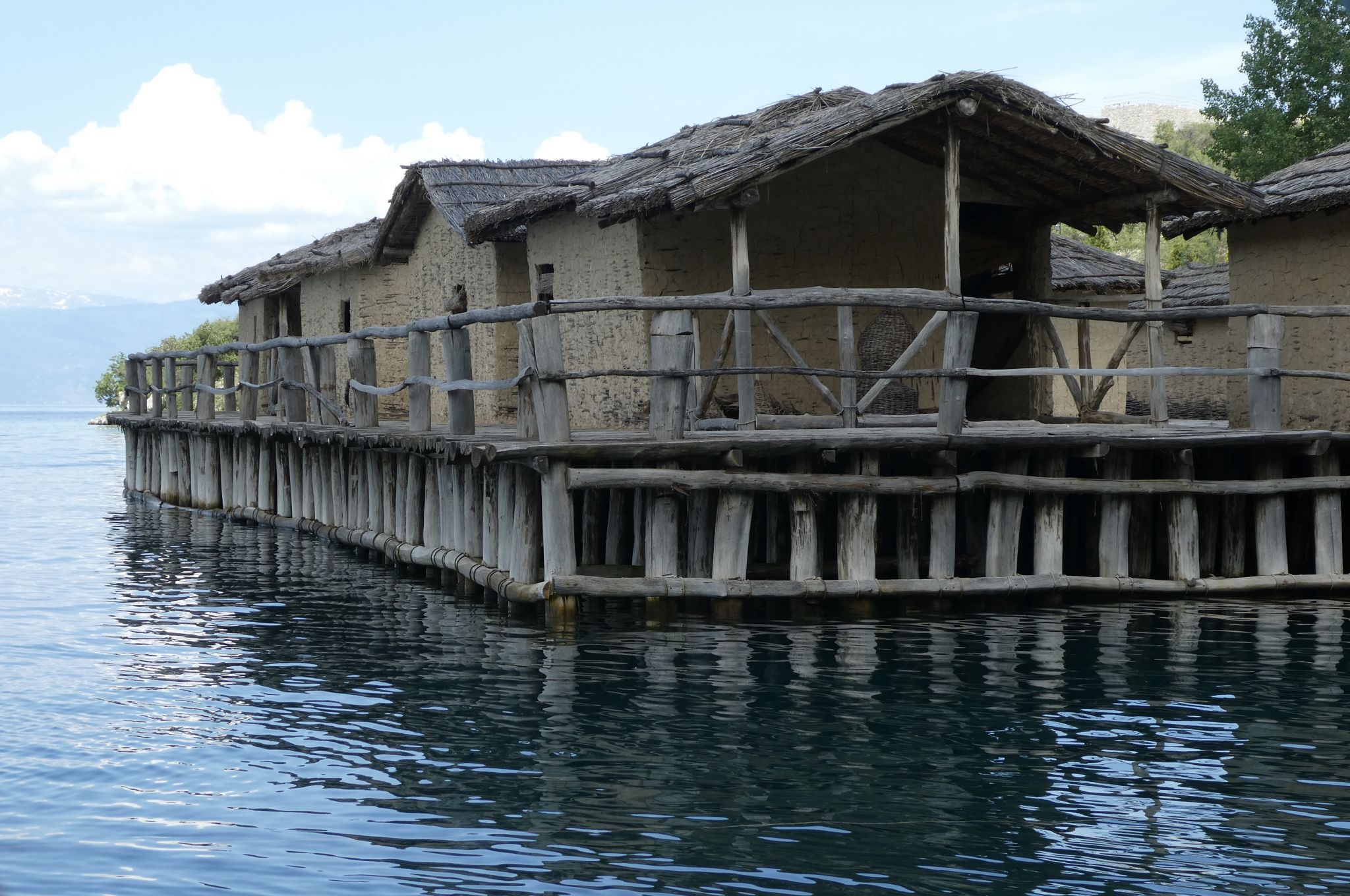 ‘Bay of bones’ sounds sinister but actually refers to the bones of animals dropped into the water under the dwellings.  It is possible to scuba dive here, if the opportunity to see ancient animal bones in a few metres of murky water is of interest.

Herodotus passed through in the 5th century BC.  His observations of the settlement at that time contain an interesting contrast to modern standards of child safety. 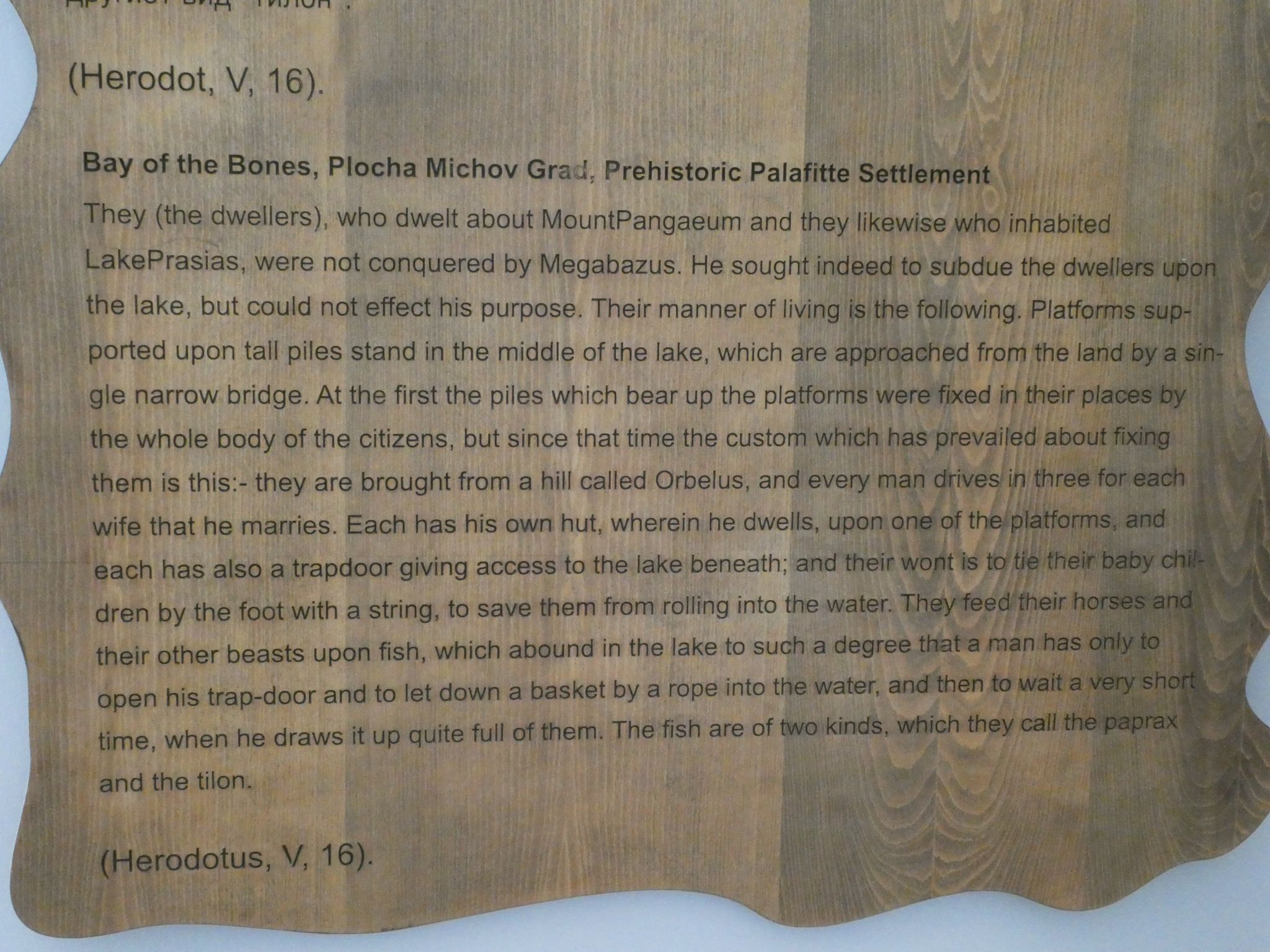 Then it was on to the Monastery of Sveti Naum.  That’s Saint Norm in English.  At least, that’s what we decided.  An unusual depiction of Sveti Naum carved on site from a single oak tree greets the visitor. 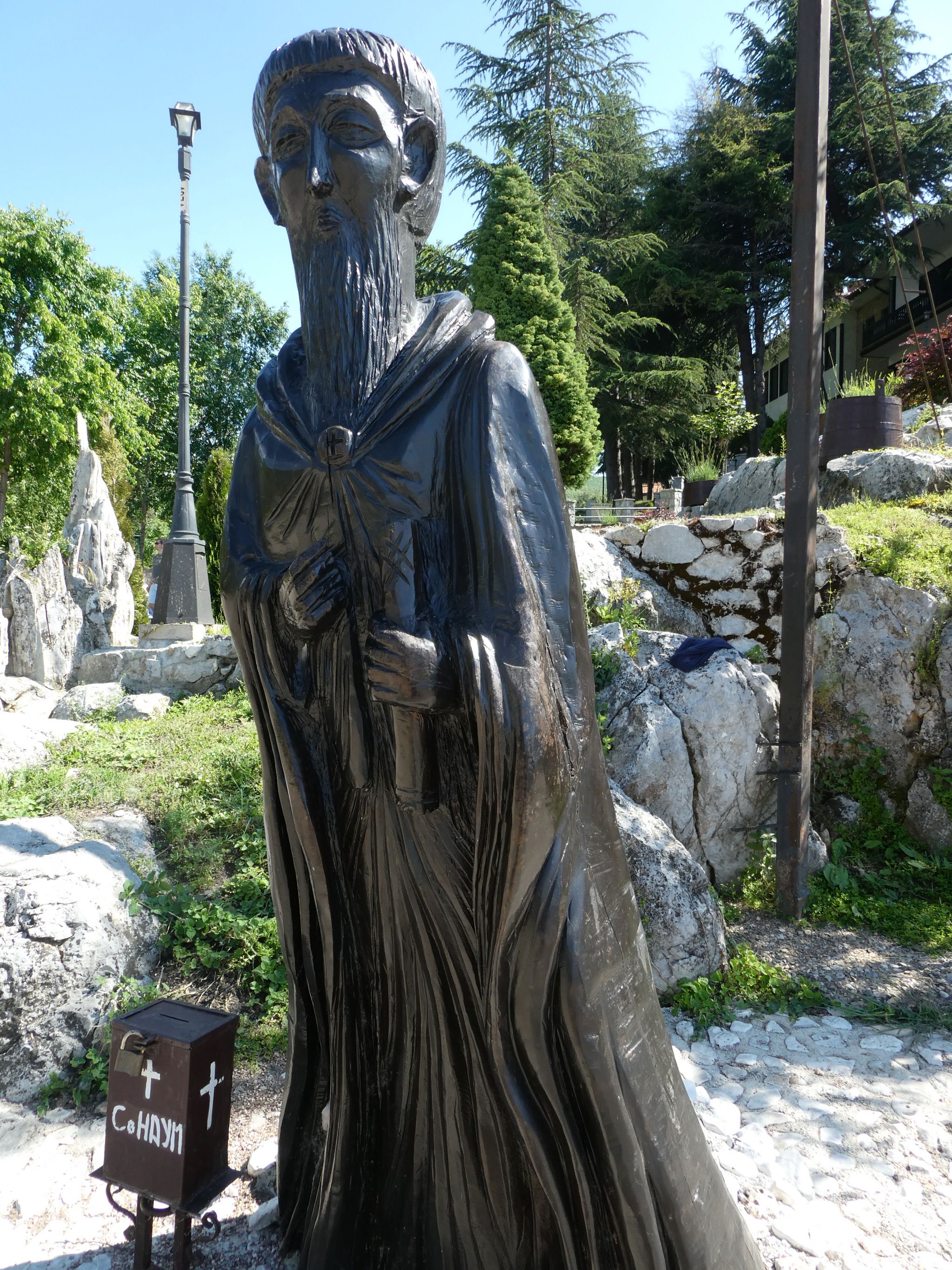 The Monastery was established in 905 AD and is very typical of those built in the same era.  Its premier lakeside position gives it a serene atmosphere, and there are both ‘ordinary’ and white peacocks. 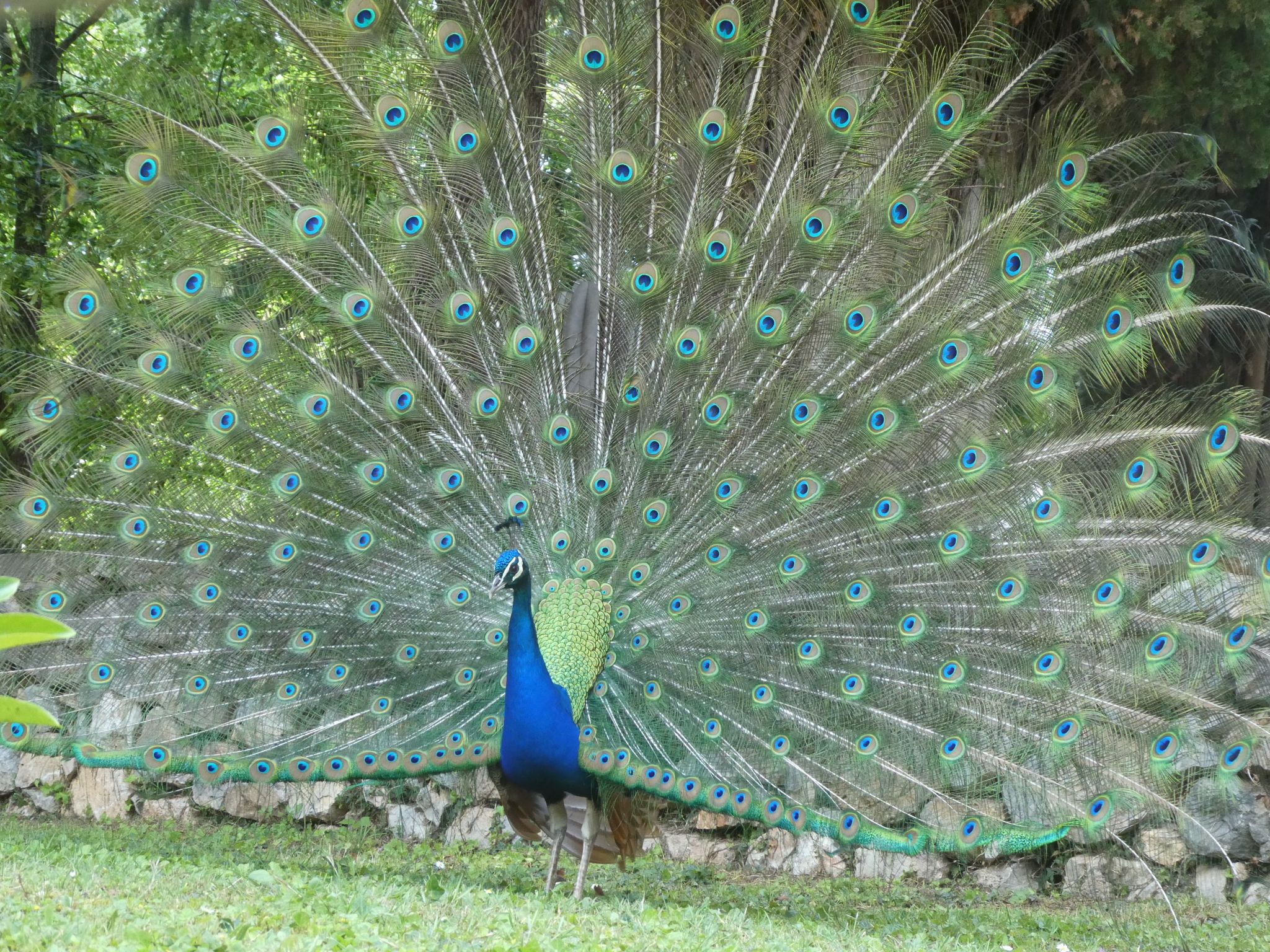 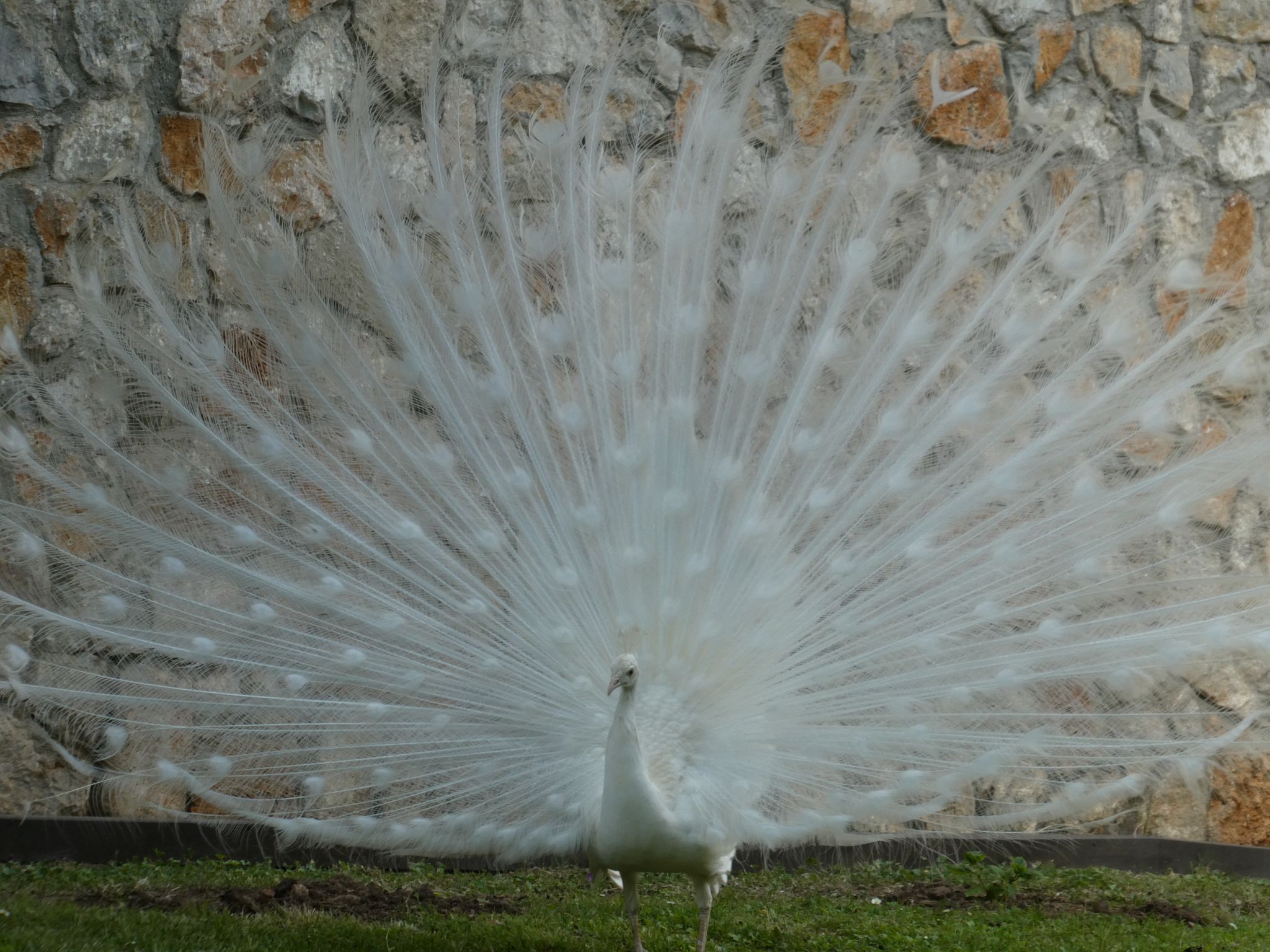 Mobile phone photography has become so simple but, wow, aren’t they starting young these days! 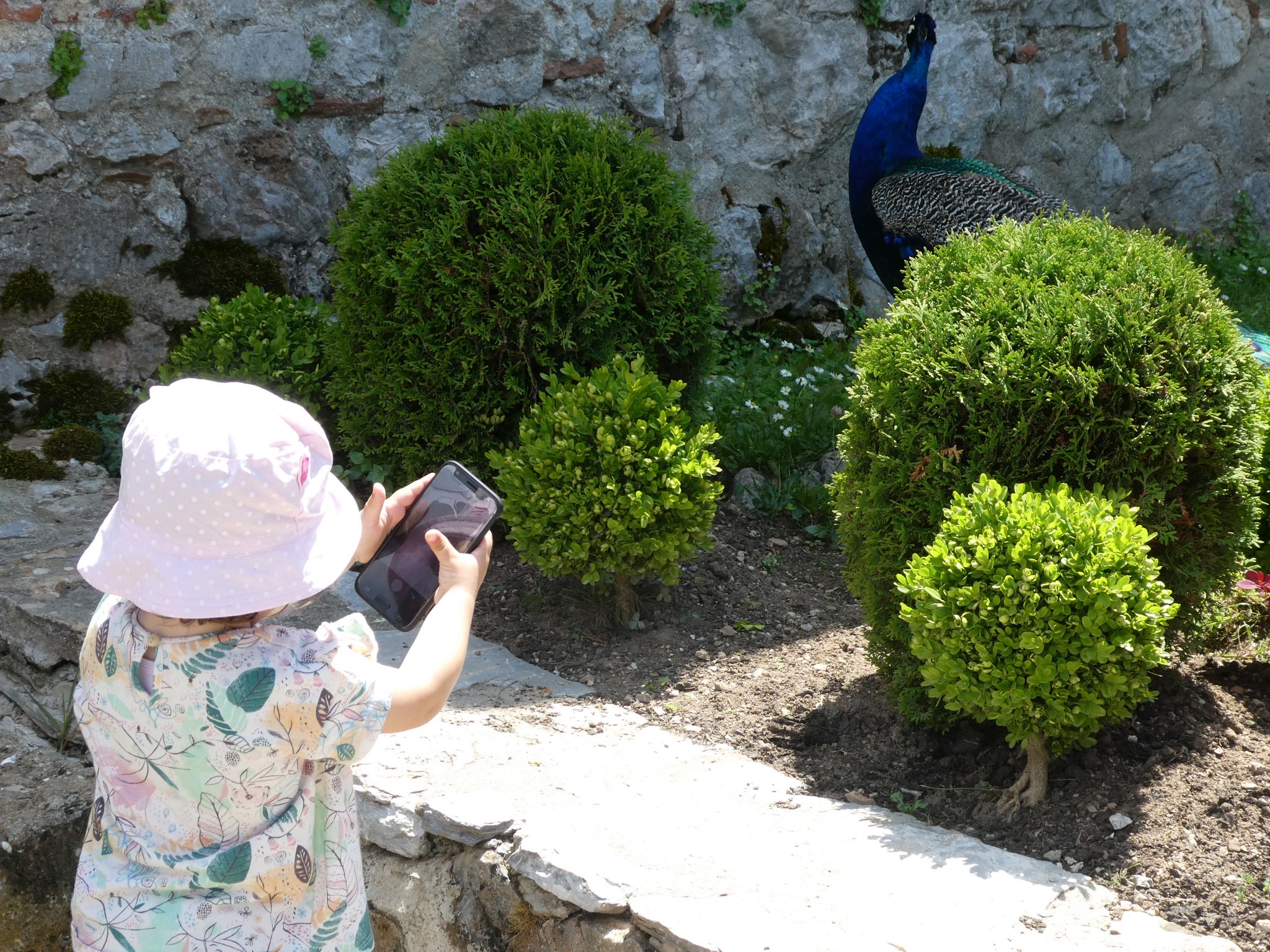 Lake Ohrid is fed in part by freshwater springs which bubble to the surface near to Sveti Naum.  For a few euros, a boat man will row you around the waterway.  The water is so clear, what looks like reflections of trees is actually greenery growing under the water. 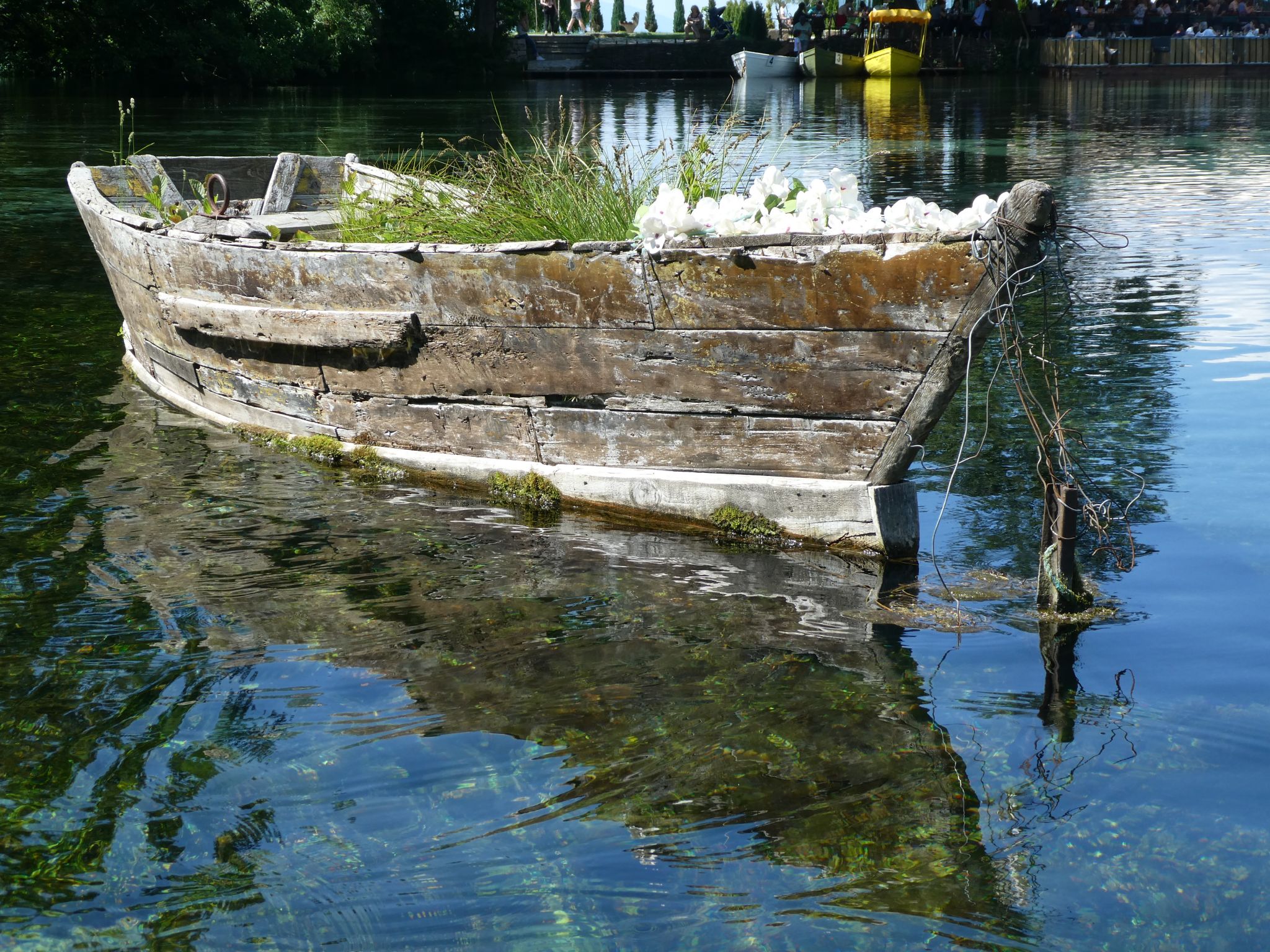 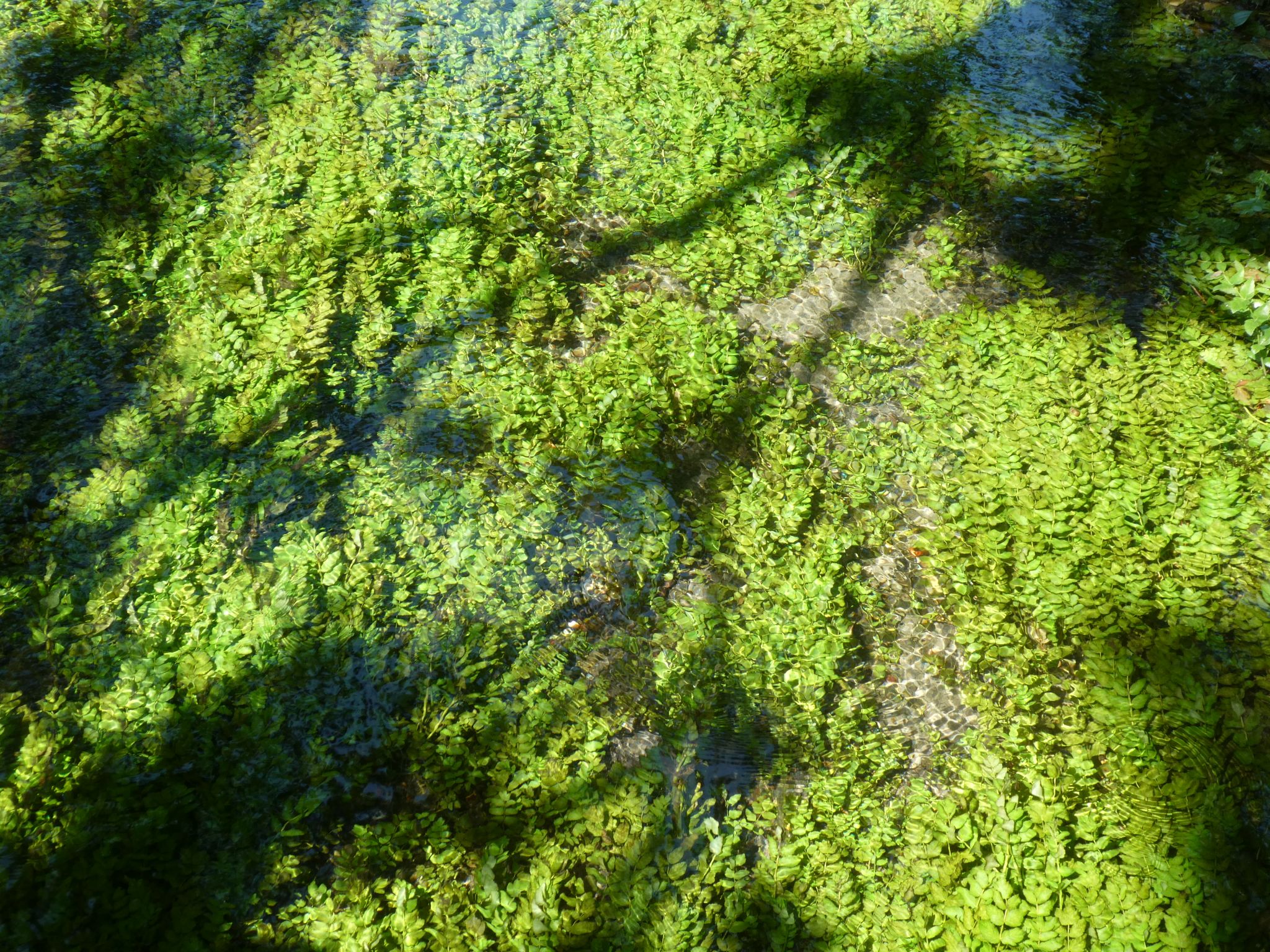 When we decided to stay longer, we cased the Old Town and found an old apartment with a kitchen, a balcony with an unbeatable view, and no bars/clubs in earshot.  We seriously wondered whether this might be a suitable bolt hole in the off season if we decided we needed to stop for a while. 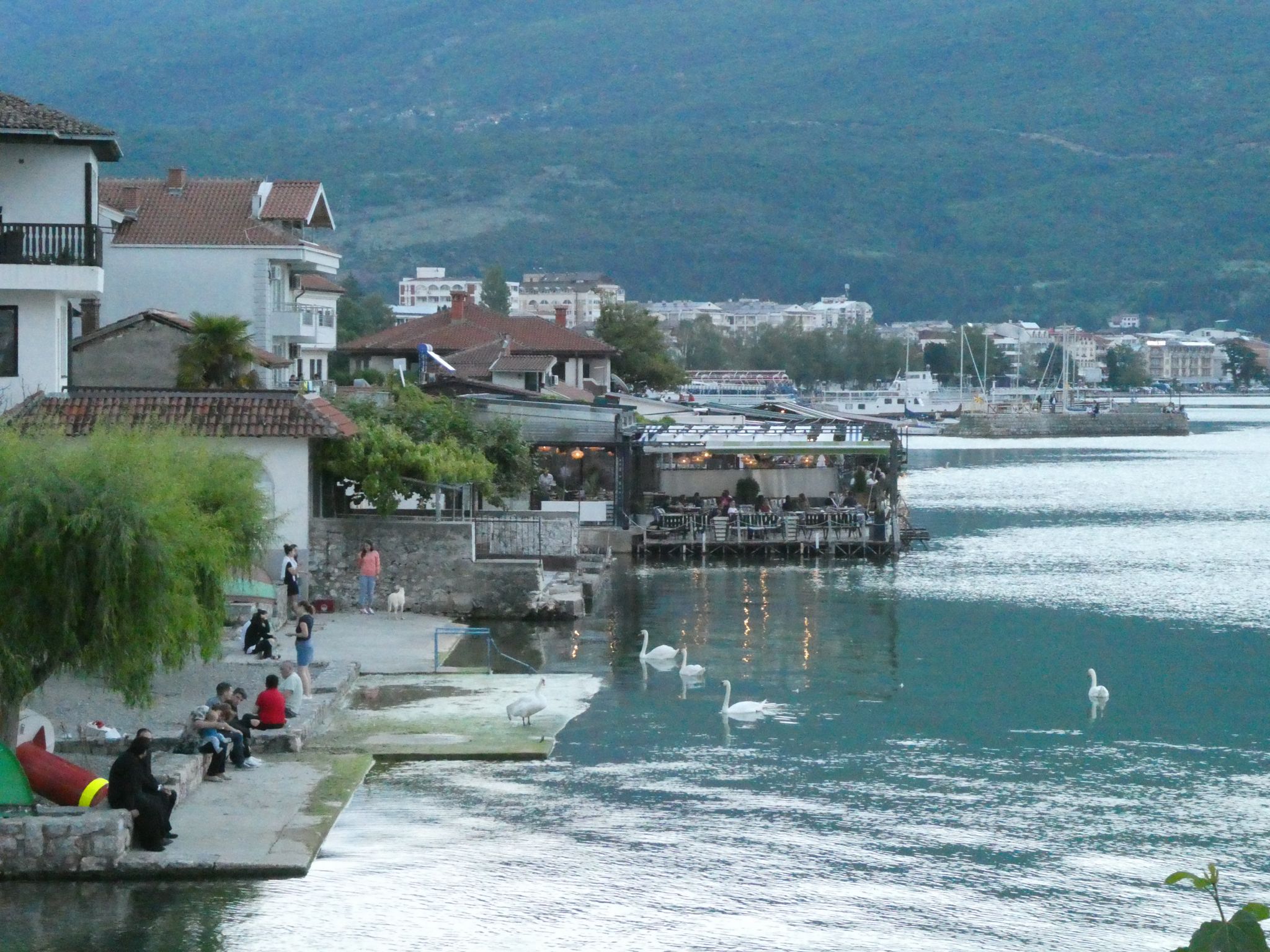 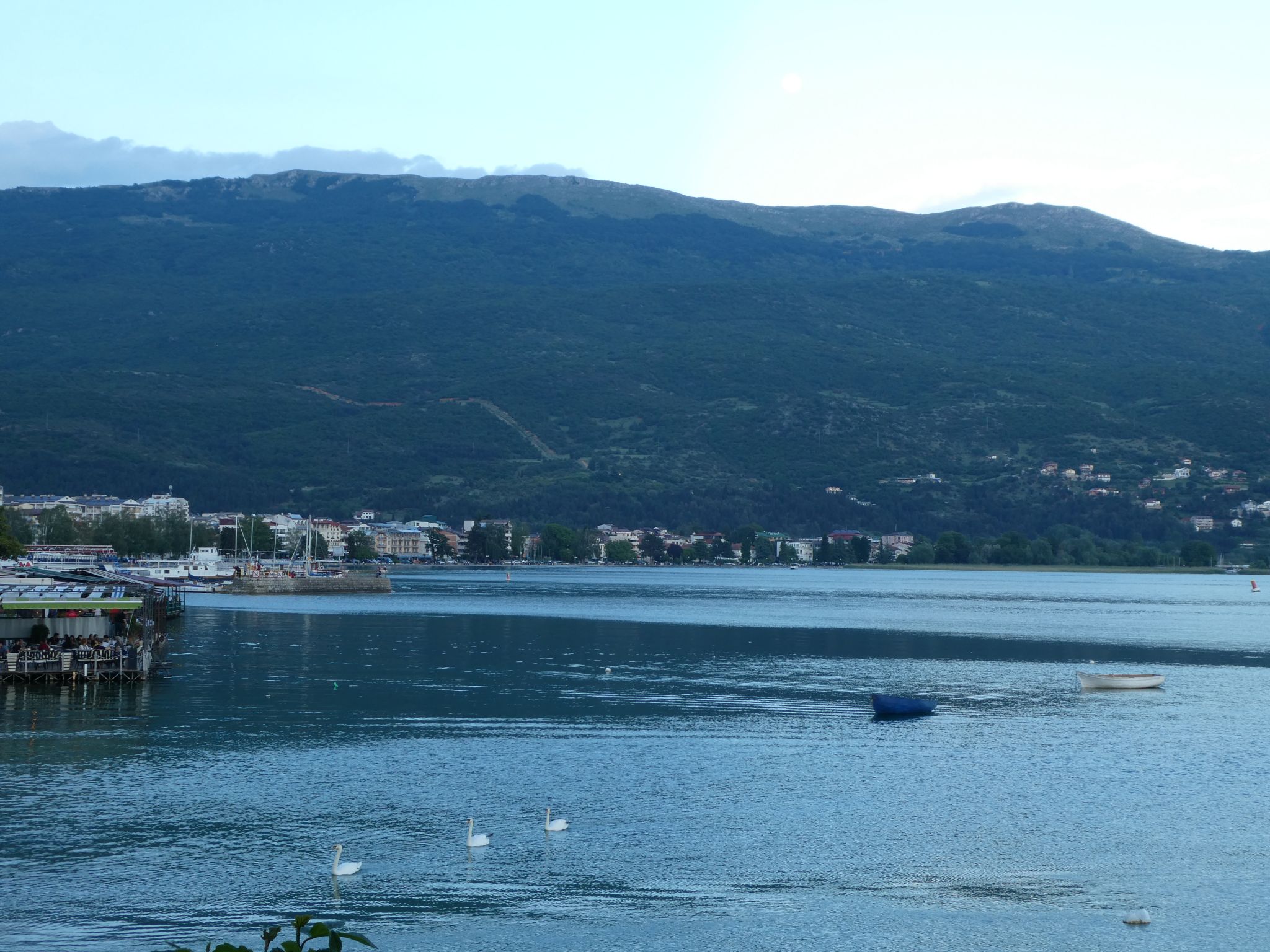 But not yet.  The reason we delayed our departure was to fit in a trip to Golem Grad –  see next post.  And then, it was on to Skopje.