At least for those of us from the other side of the world, it could be said Skopje has an image problem.  It’s problem is that it doesn’t have an image.  Skopje?  Where is that, again?  What country is it in?  What’s it famous for?

The government of Macedonia is alive to this.  Its solution – build big, visually impressive stuff which will, at least in theory, serve the dual purposes of stirrng national pride and attracting tourists.

Skopje’s city centre had some lovely neoclassical buildings until 80% of the city was flattened by an earthquake in 1963.  The modernist buildings constructed en masse after the quake were utilitarian but ugly, unless you love concrete blocks.

So, in 2010 the government embarked on ‘Skopje 2014’, an ambitious project to reinvigorate the city centre with faux neoclassical buildings reminiscent of those lost in the quake.  They also thought a whole lot of monuments depicting Macedonian heroes from times past would fit right in with the theme.

The new buildings are certainly beautiful, but we feel they cheated a bit.  On close inspection, some of the work is a facade covering an existing building – neoclassical grandeur on the outside, dingy 1960s flats on the inside.  And some of the brand new ones look suspiciously like buildings already famous in other parts of the world. 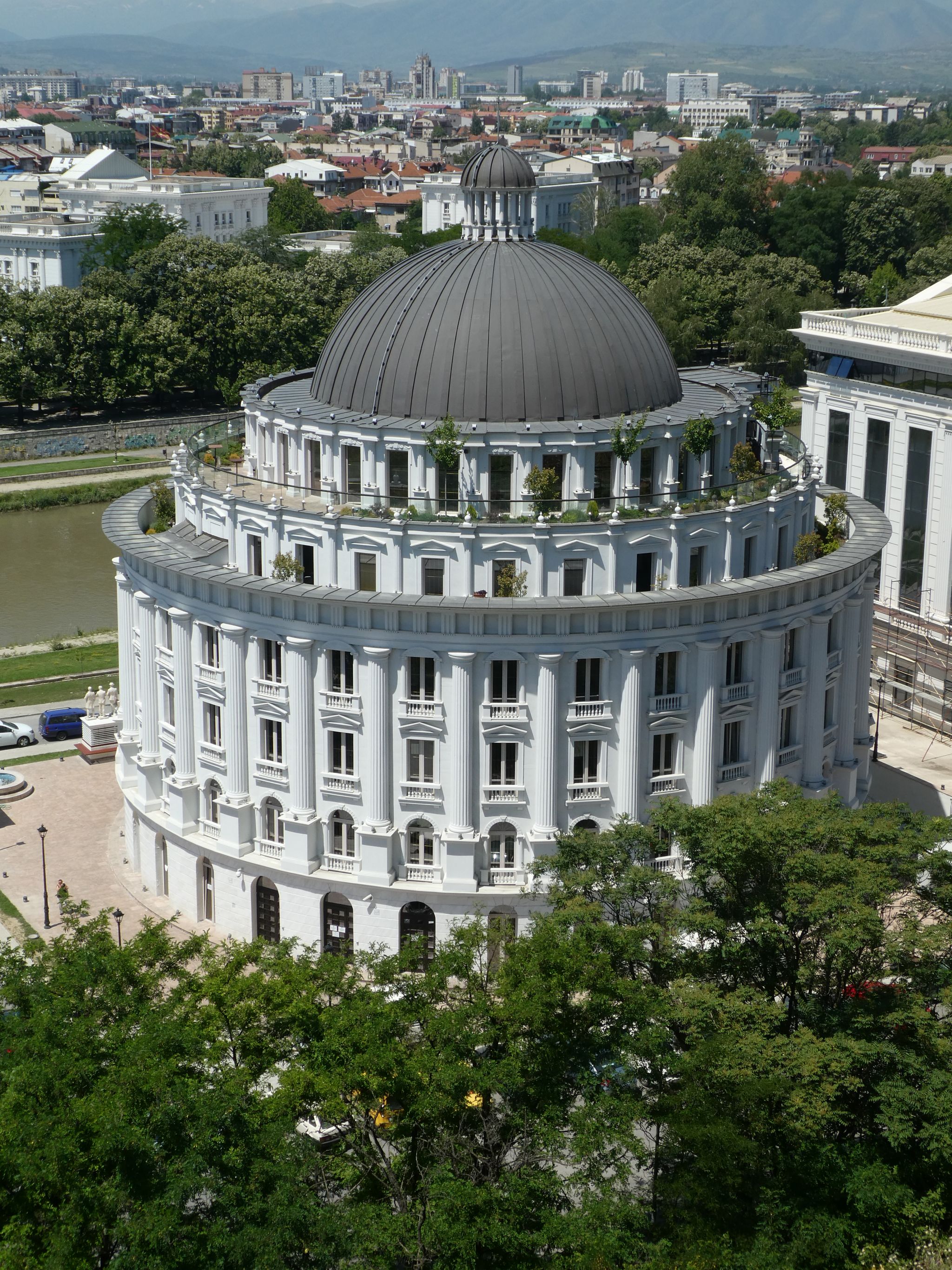 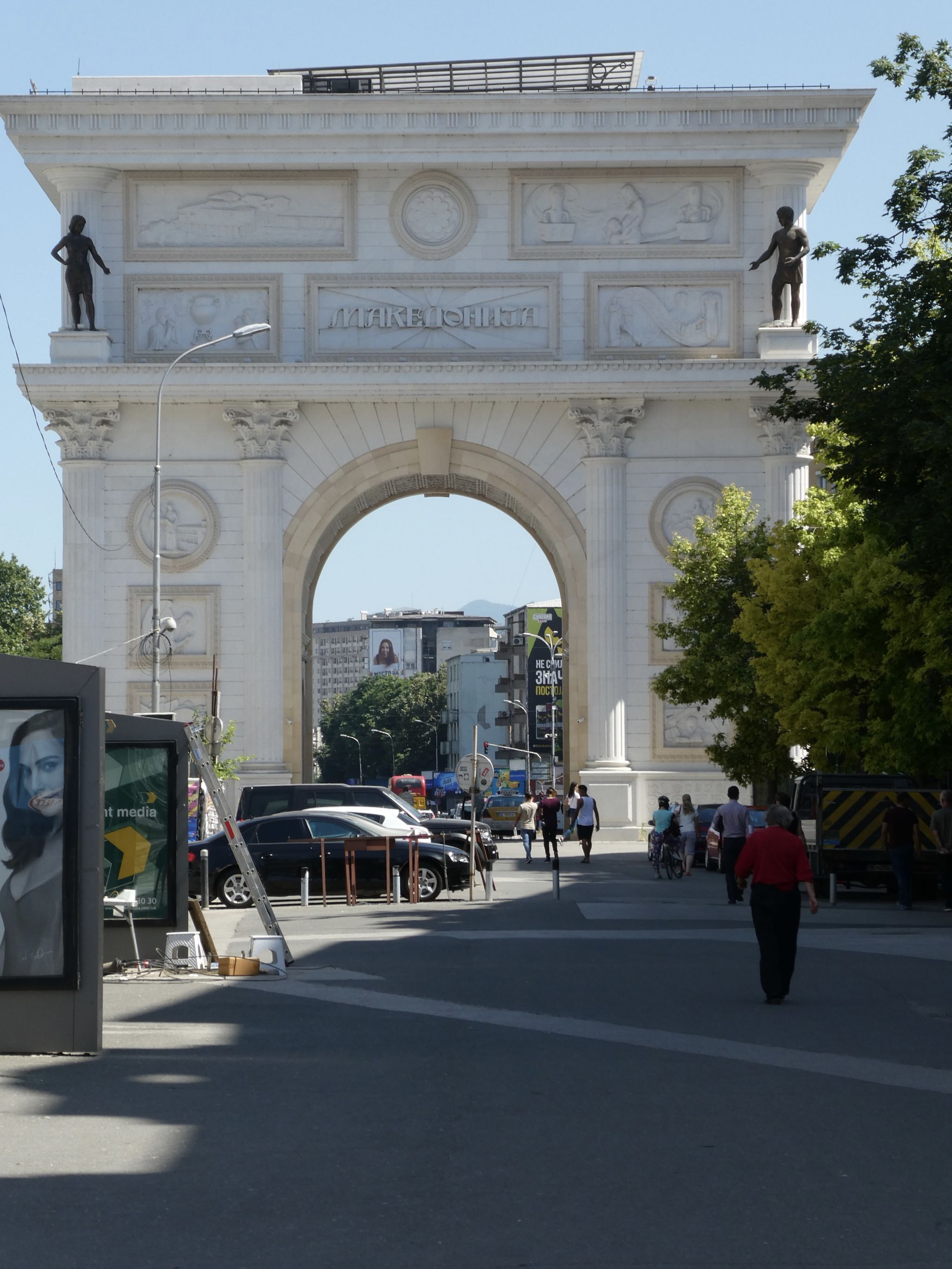 Alexander the Great takes pride of place, monumental in size, in the main plaza. 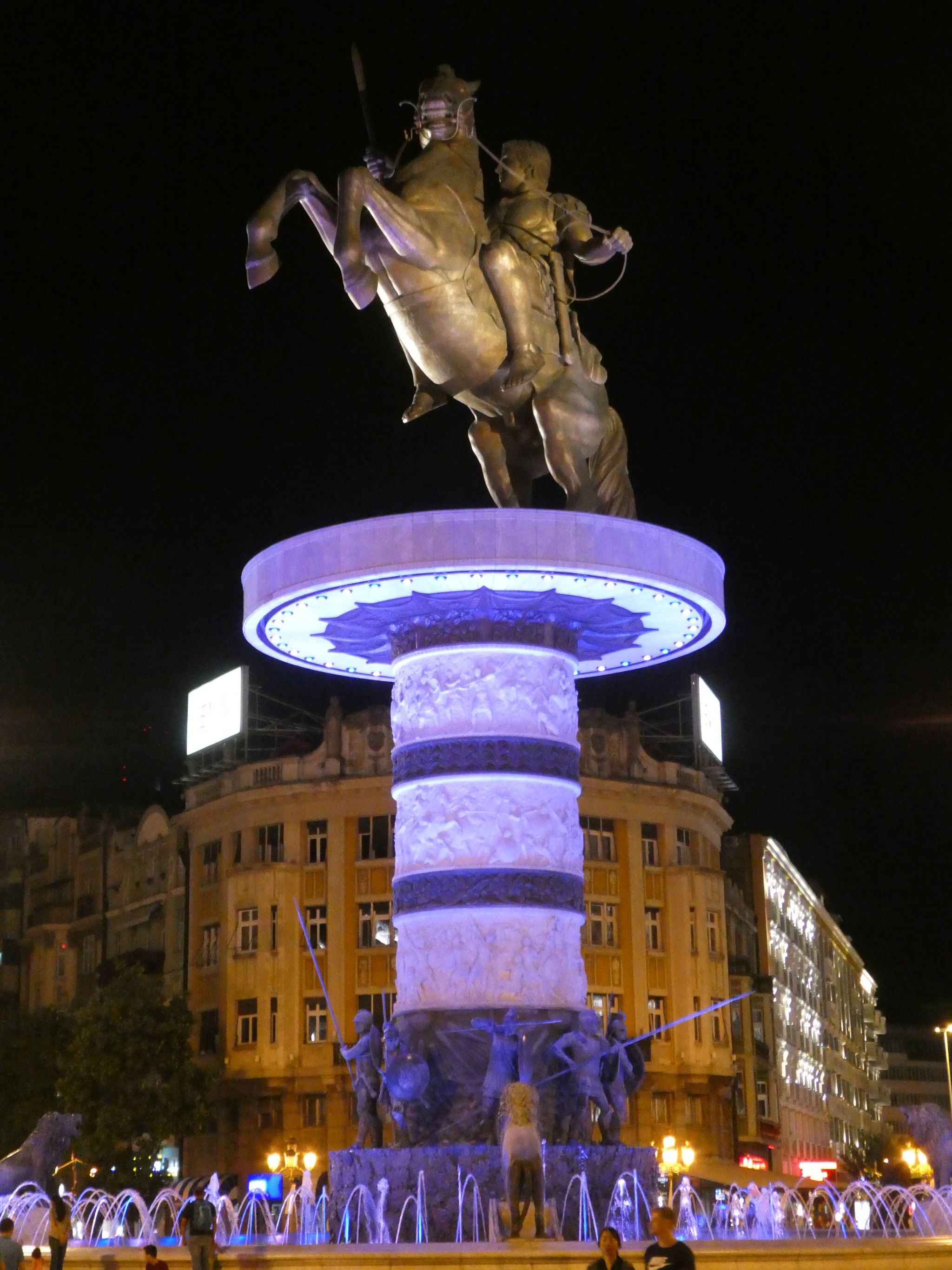 There’s also a lot of statutes of old heroes, but far from engendering patriotism, one local fellow to whom we spoke said ‘no one knows who these people are’. 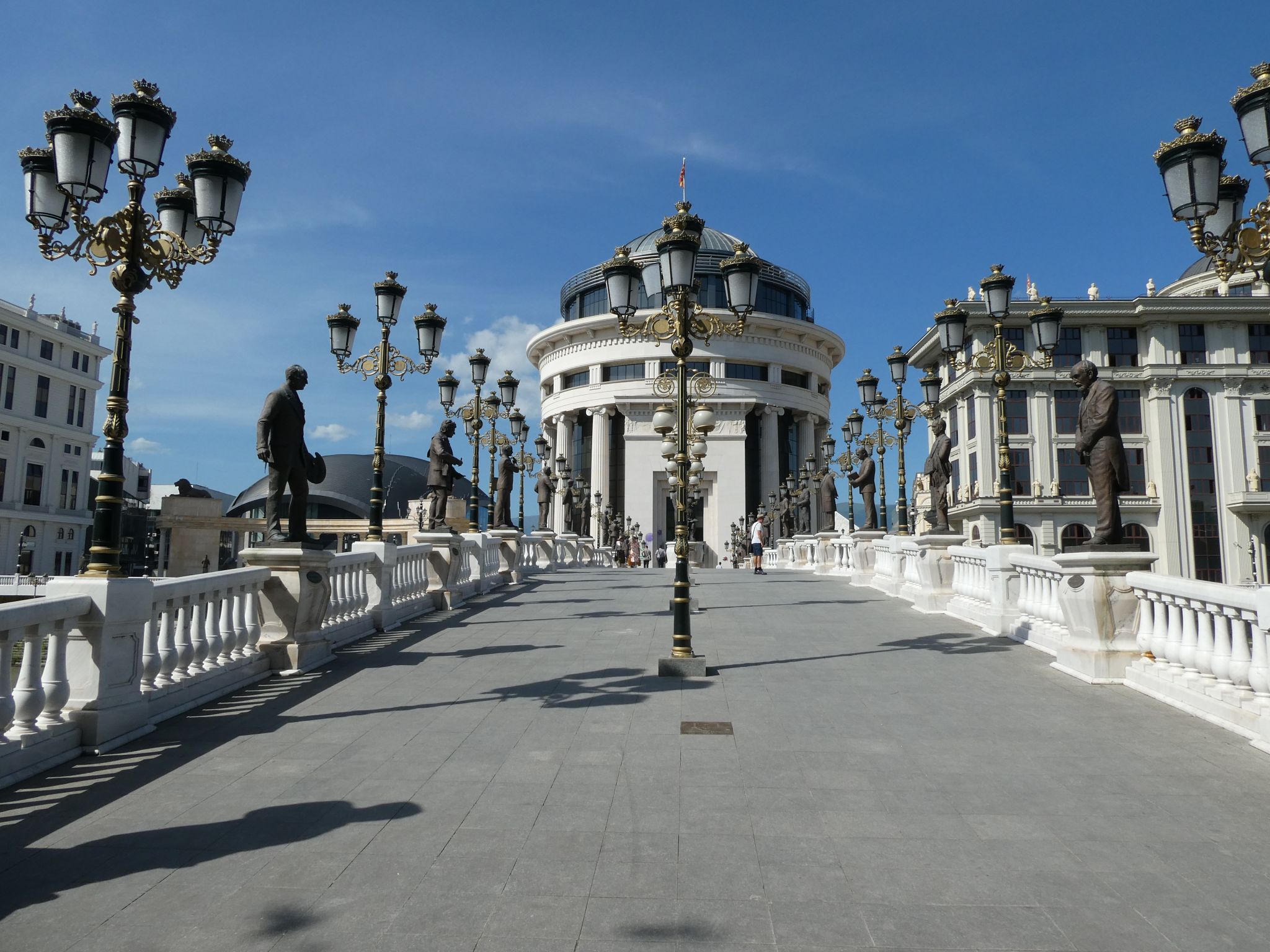 Some of these statues, particularly the huge Alexander the Great, are controversial as some believe they are deliberately designed to antagonise Greece.  Greeks consider Alex to be one of their greatest heroes.  Macedonians will point out his father was Philip of Macedon so doesn’t that make Alex a Macedonian? Greeks will say Alex was born in Pella, now part of Greece.  Macedonians will counter that at the time, Pella was the capital of the Kingdom of Macedon.  Do not try and debate this with a patriot on either side and expect to get away in under an hour!

The depth of feeling on the Greece/Macedonia issue was particularly evident at the Museum of the Macedonian Struggle for Statehood and Independence which, with all due respect, presents a rather one-sided view, particularly of the disputes over territory straddling the border of the two countries.  Visits to the museum are only by guided tour, and our guide practically seethed with indignation about ‘southern Macedonia’ being a part of Greece.

Leaving aside the disputed statues, there are some really good ones recognising the holocaust and other human tragedies. 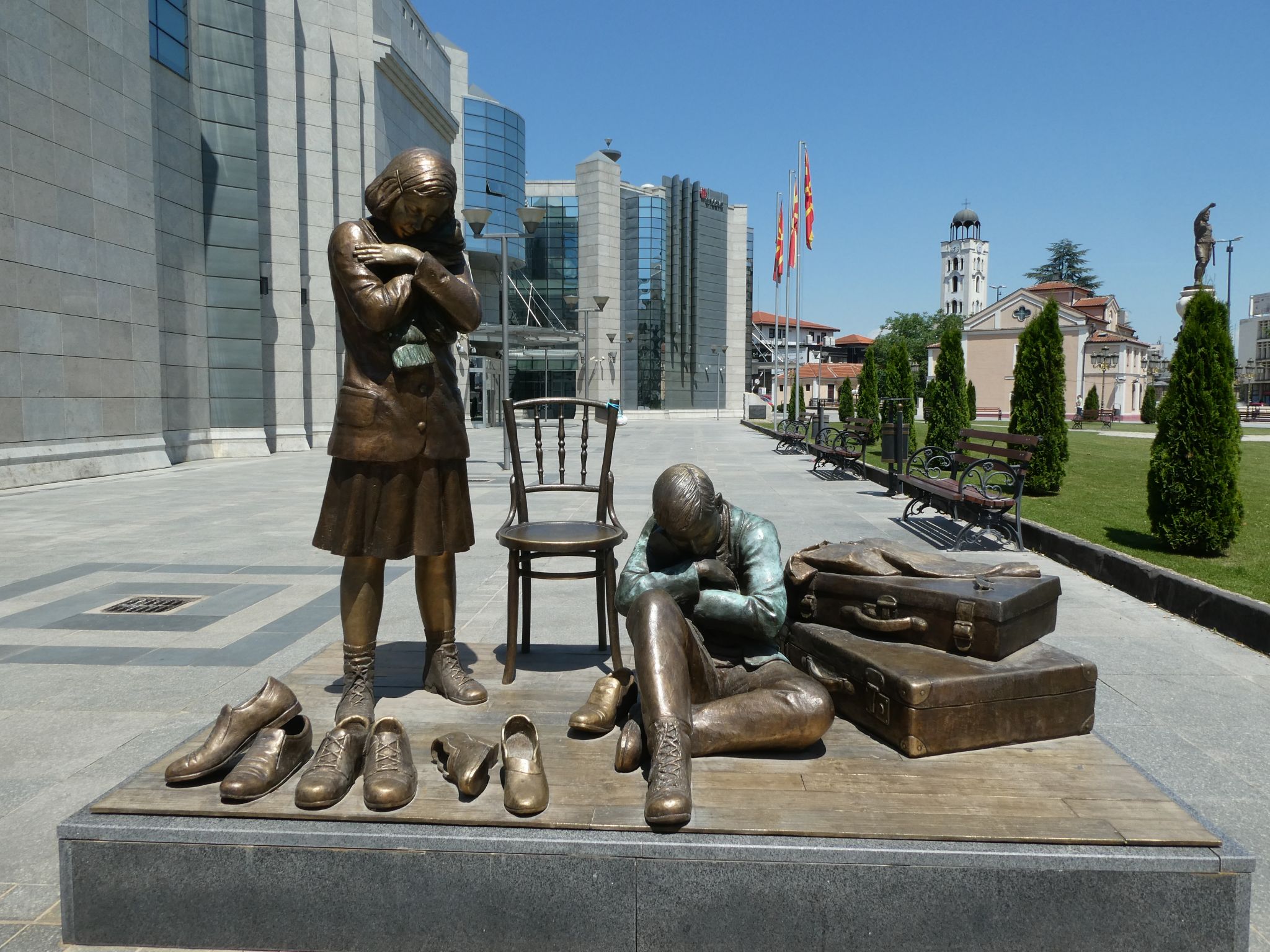 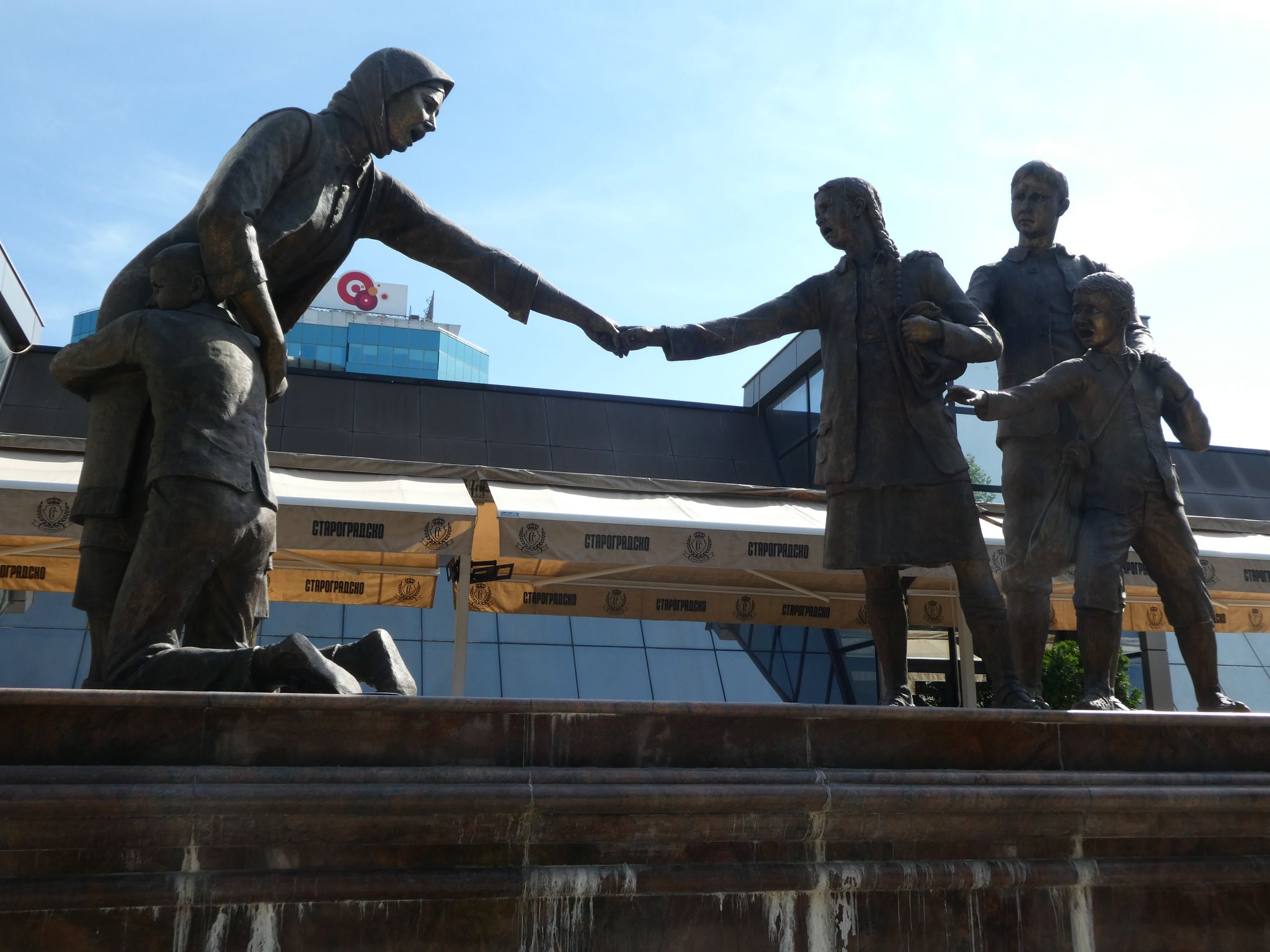 There’s one dedicated to ‘mothers’.  Were those empty chairs meant for the fathers conspicuously absent from the labour ward? 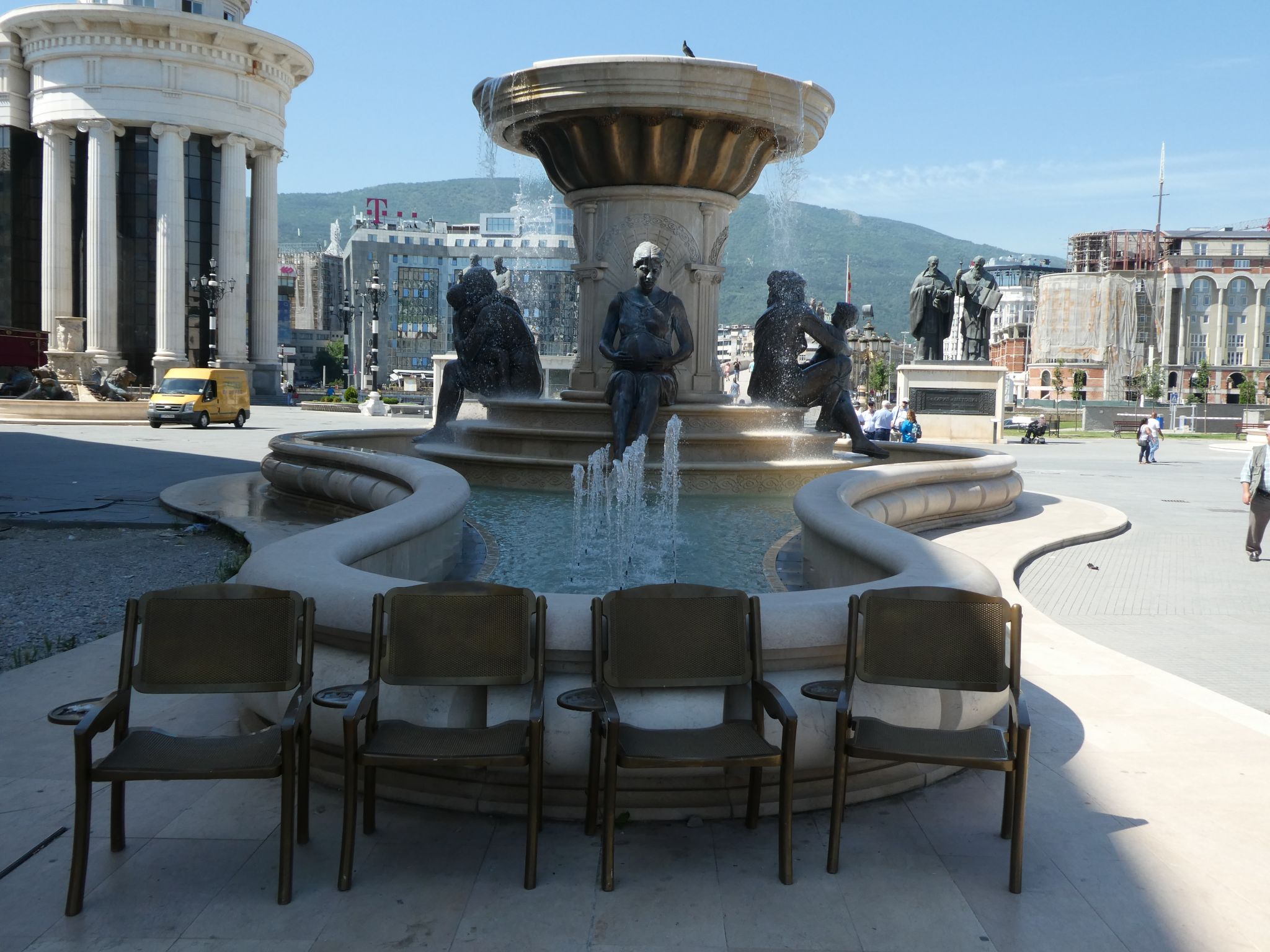 Some statues reflected the purposes of the building around them, like these outside the national theatre. 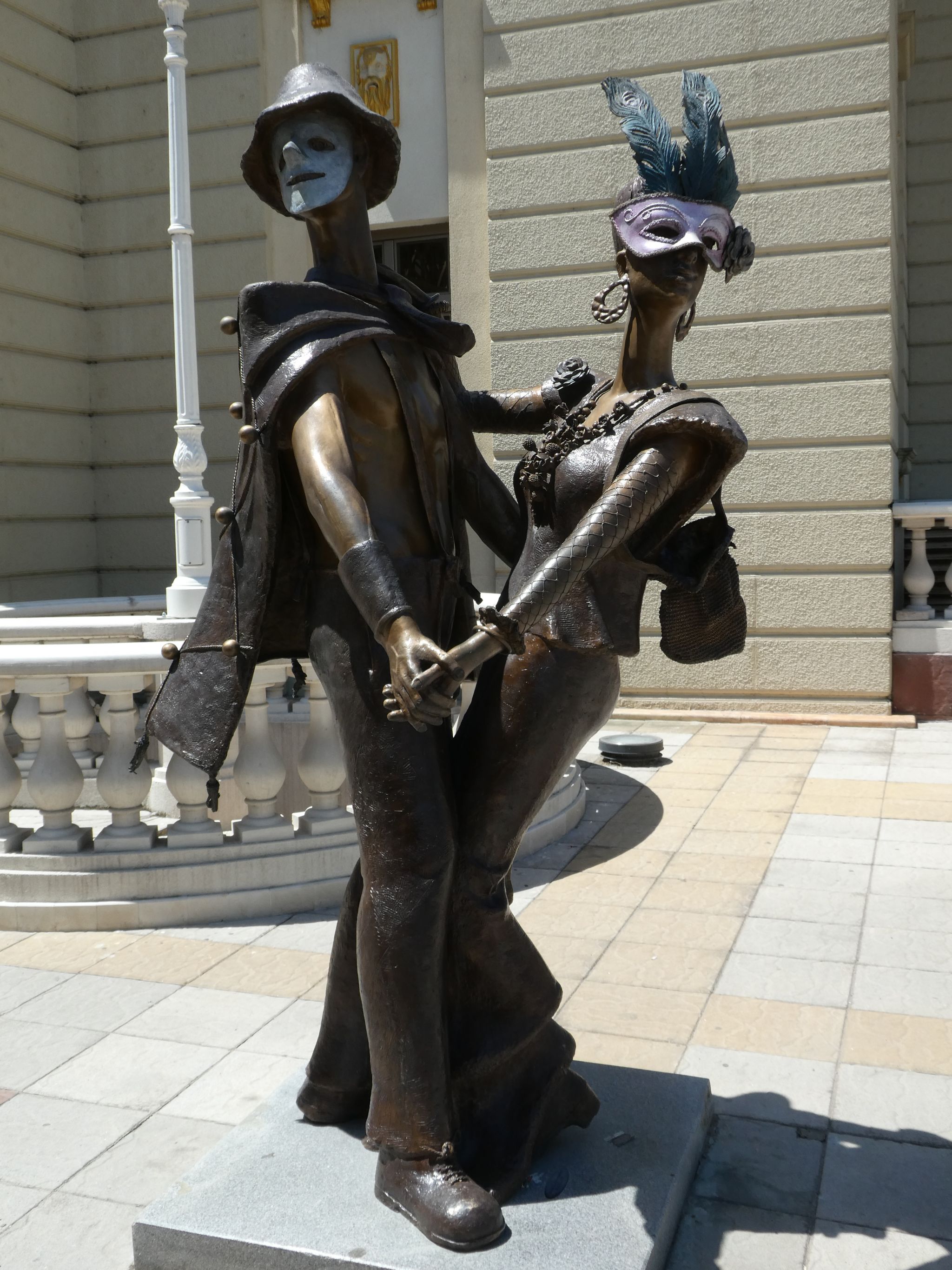 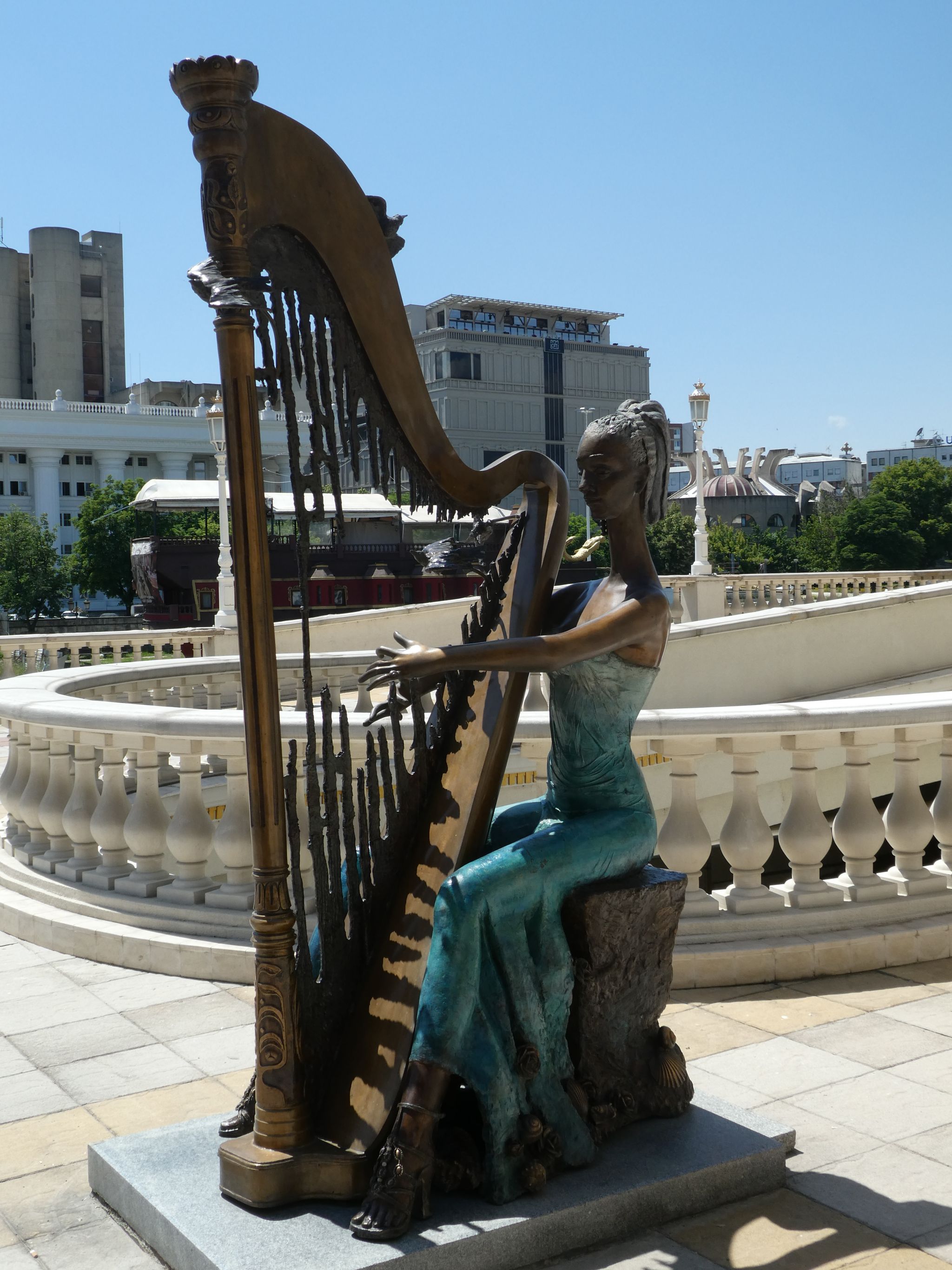 And then there were many that were just for fun. 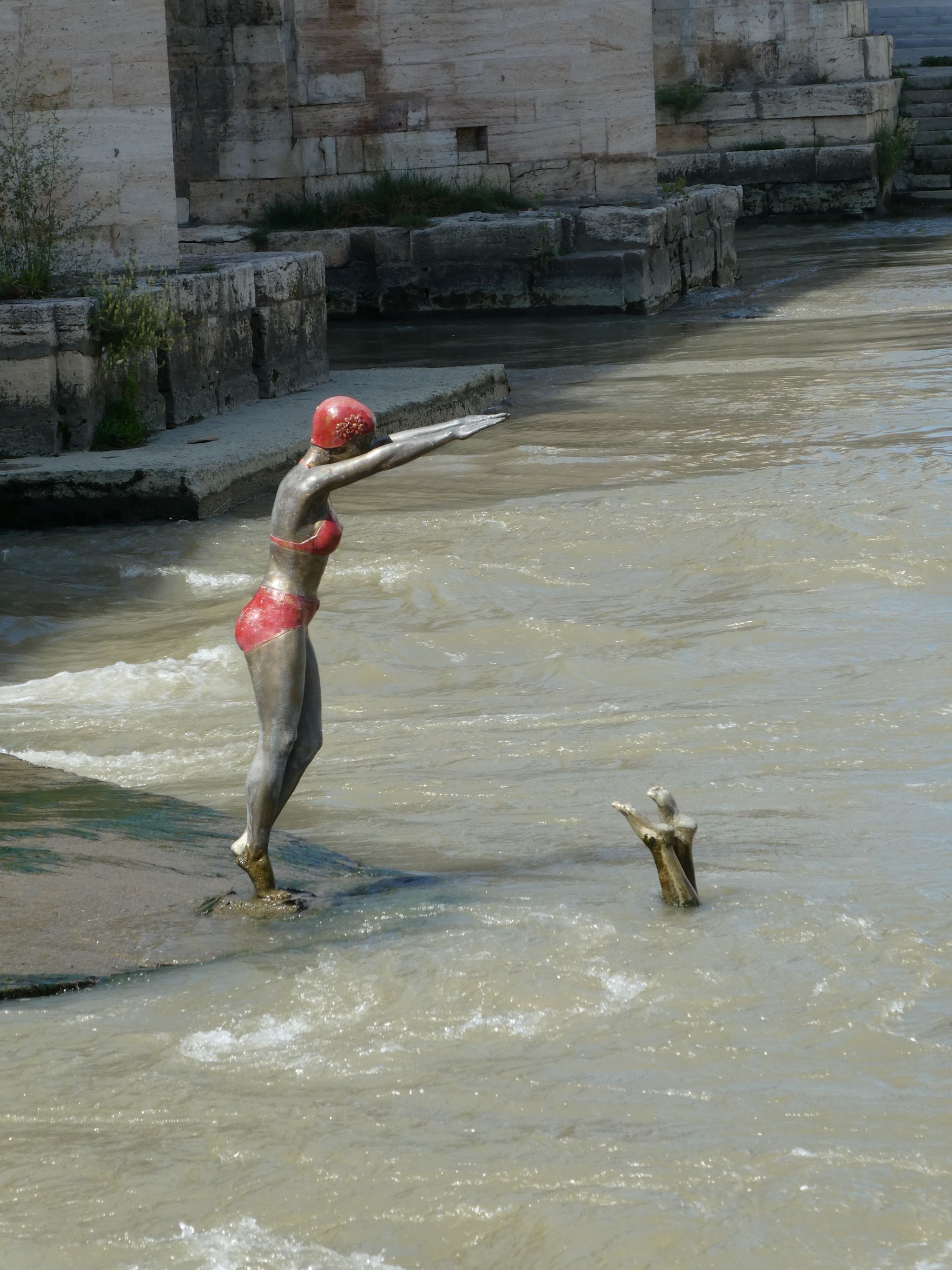 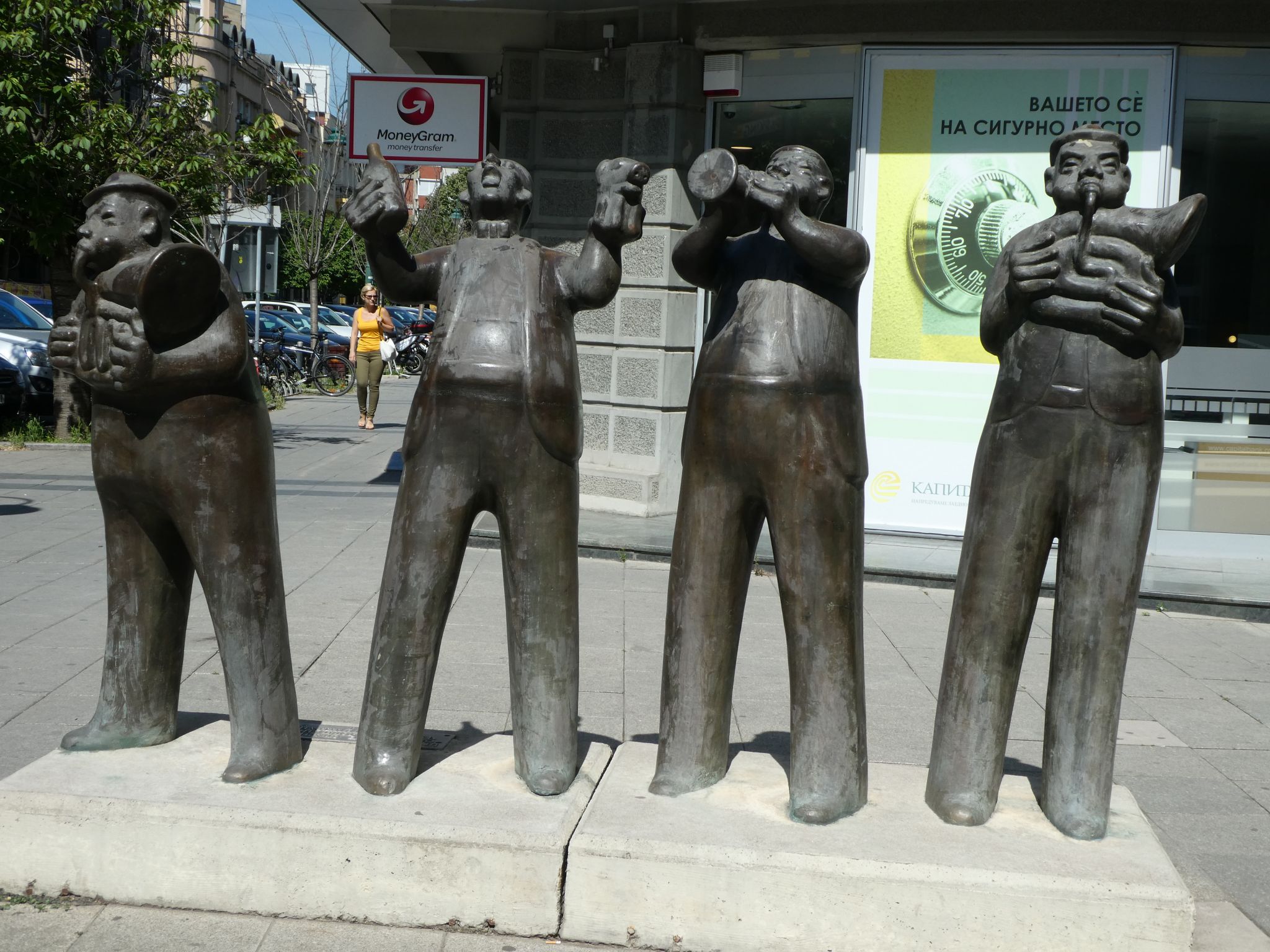 Rather than inspiring patriotism, there has been widespread disgruntlement at the cost.  Millions of euros have been poured into the project and despite an intended end date of 2014, building continued apace until early 2018 when the project was halted following heated demonstrations.

Less controversially, Skopje claims a stake in Mother Teresa’s fame.  She was born and lived her early life here before entering the convent in Ireland.  Hence there is a boulevard, chapel and museum dedicated to her. 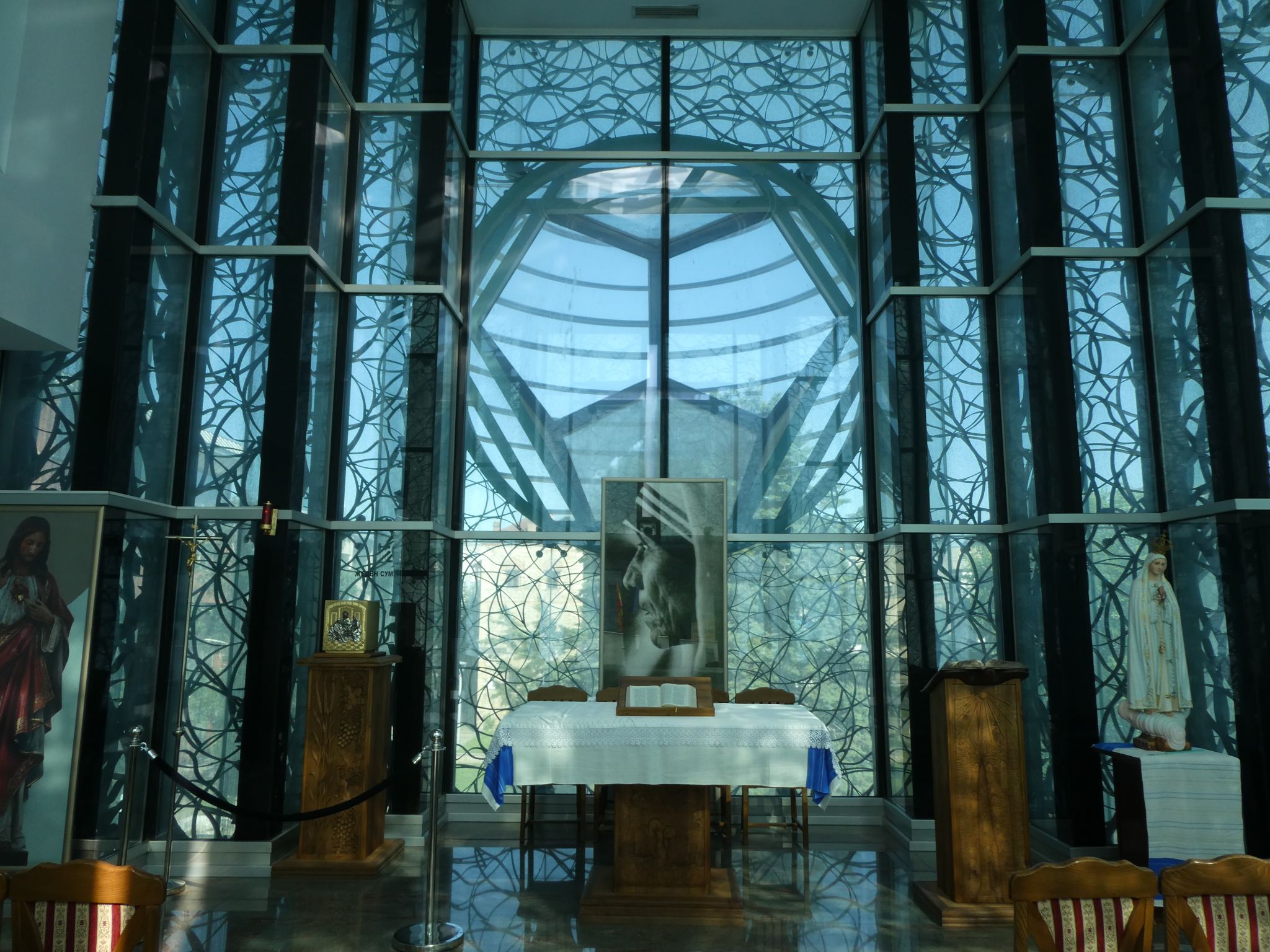 Skopje also has a thriving Muslim community and a restored Old Town dating from the Ottoman era.

It was Ramadan and on our second night, we witnessed an interesting, but entirely sensible, phenomenon.  Wandering through the curiously quiet Old Town, we went into a bar for a drink.  The only other patrons were two young men, sitting at a table talking to the owner, but with no drinks in front of them.

Just after 8pm, the muezzin’s call was broadcast, signalling the end of the day’s fast.  The second it started, the two men leapt to their feet and ran to the restaurant across the lane.  Literally the second their butts hit their chairs, pizza appeared.  They downed a glass of water and began wolfing down the pizza.  Within minutes, every restaurant in the locale was full, and there was food in front of every diner.

A practice has developed here, and we saw the same in Kosovo, of pre-ordering dinner, which is timed to be served exactly when the call ending the day’s fast is made.  Eminently understandable that when you have been fasting for upward of 12 hours, you want to eat as soon as possible.

This has been known to confuse tourists, who are told ‘we have no tables’ when a restaurant is completely empty.  The thing is, once that call comes, there won’t be a seat in the house, and more to the point, the kitchens are often stretched to the limit gearing up to serve to every seat at once.

When we finished our drinks and headed off for dinner, the whole precinct was pumping!

About 15kms south of Skopje, Canyon Matka is a 5,000 hectare forest reserve and popular getaway for hiking, boating and kayaking.  From the entrance area, boats will ferry visitors up the Treska River to Vrelo Cave to view its stalactites and stalagmites.  Hand on heart, neither the cave nor the tites/mites are particularly awe-inspiring, but the boat trip is pleasant.

For a few extra euros, a boat will ferry you across the river to the start point of a hot hike up to the top of the canyon where an old monastery sits.  Great views from the top! 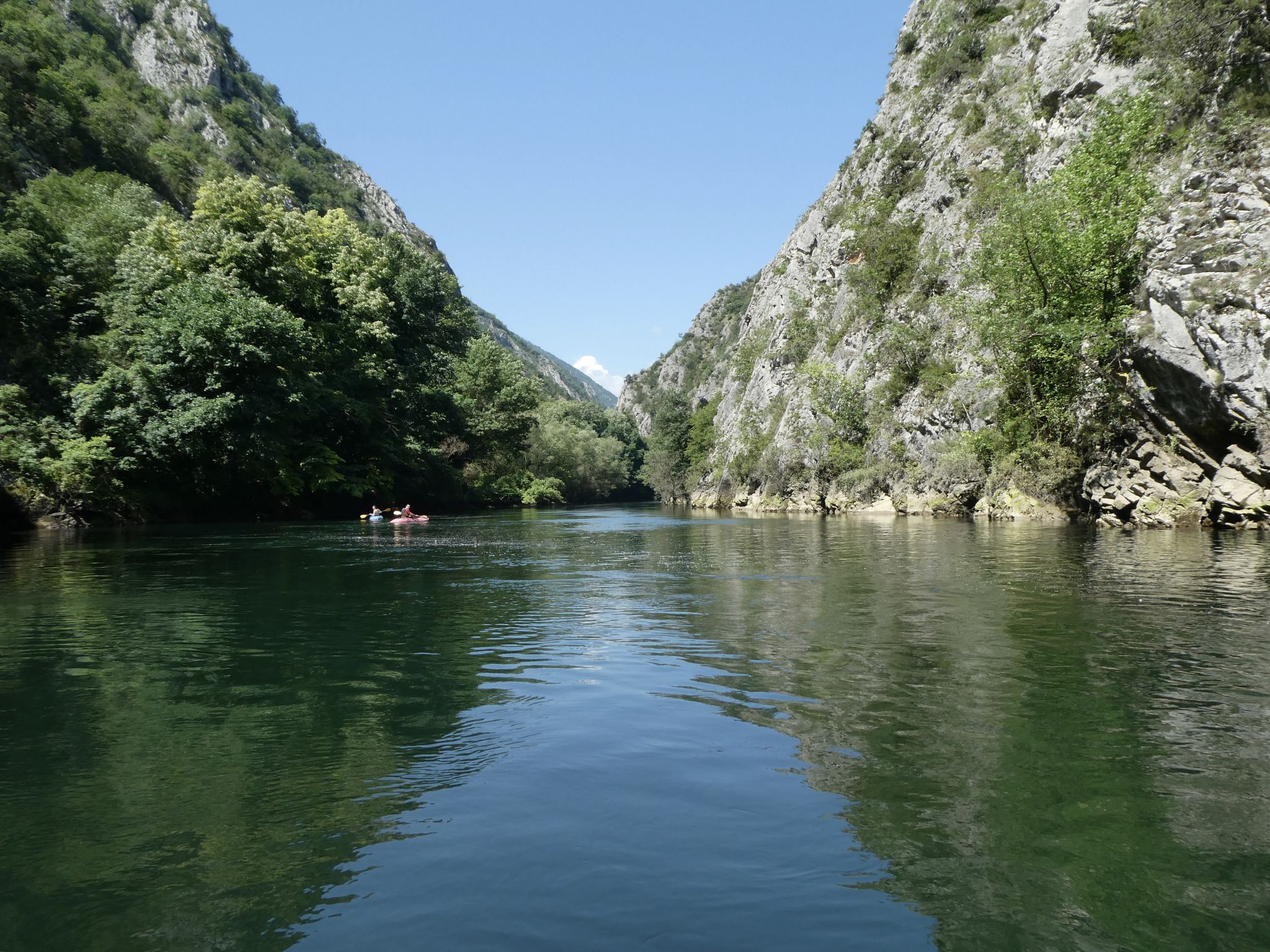 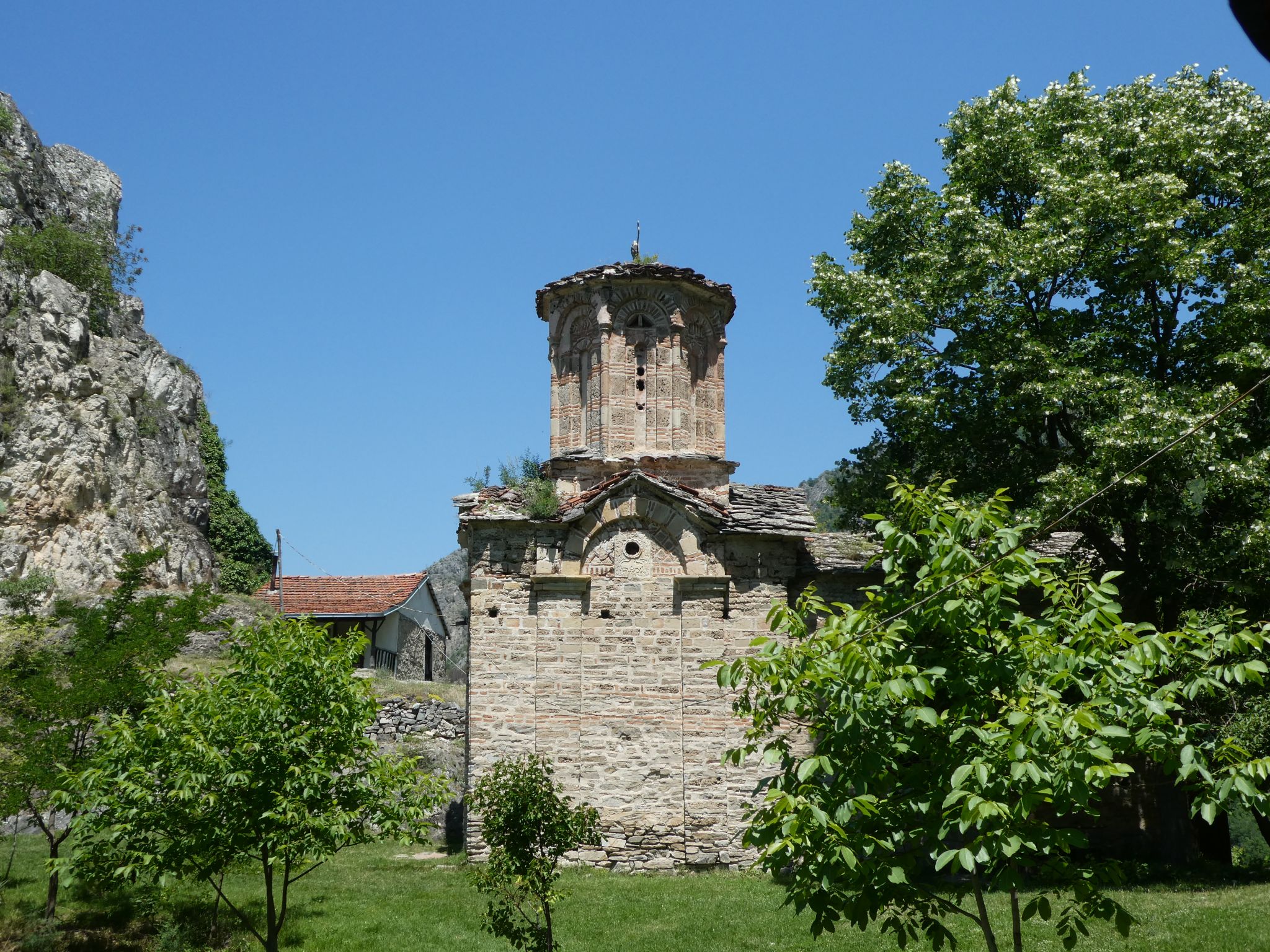 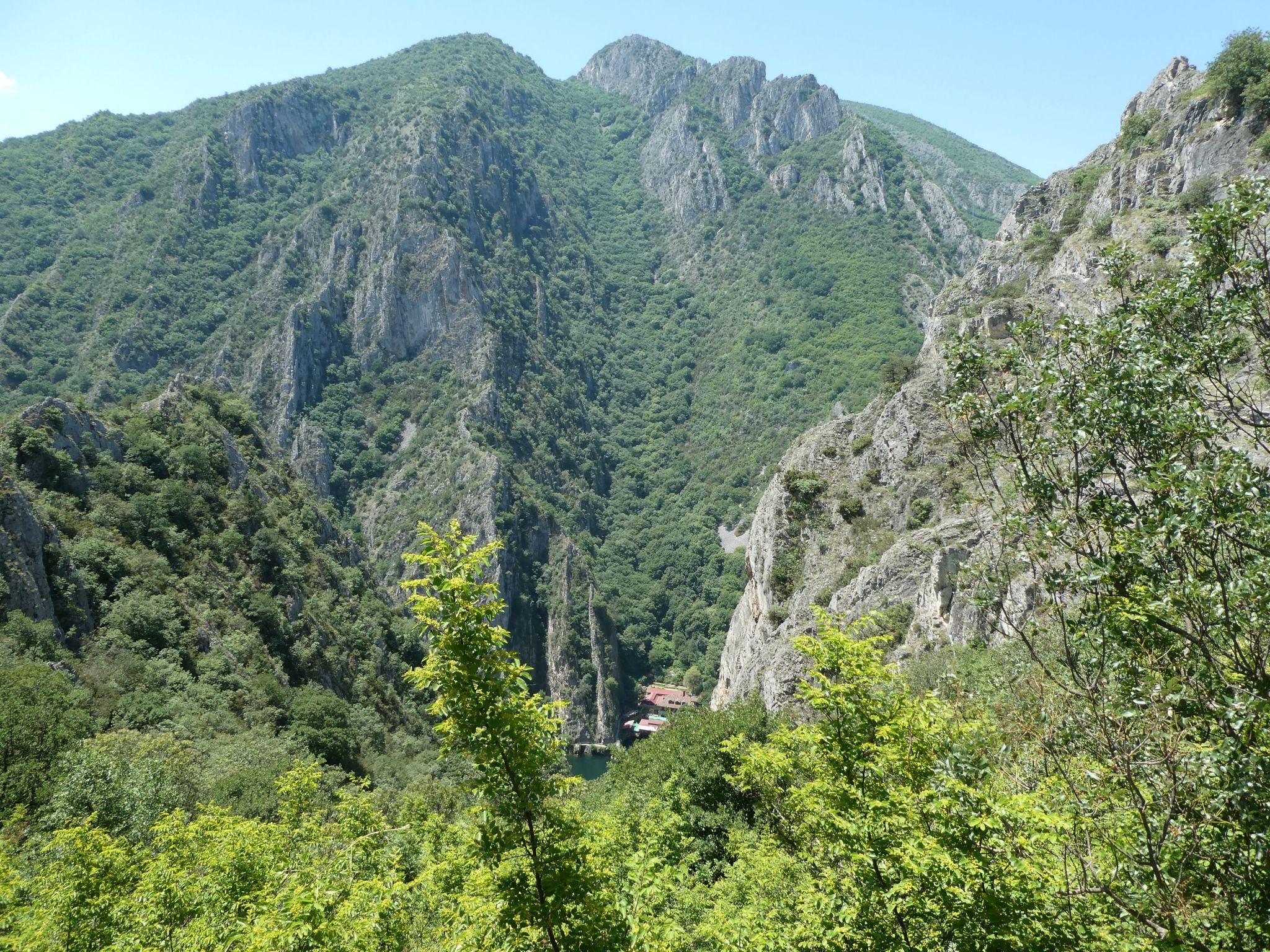 In 2015, the Guardian newspaper described Skopje as ‘Europe’s new capital of kitsch’ and that is an accurate description.  It’s definitely worth seeing.  The statues give Skopje a fun, relaxed feel and we really enjoyed our time there.

But take note, in February 2018 a Commission was established to oversee the removal of the ‘controversial’ monuments, so if you want to see them, get there soon.

As for us, next stop – Kosovo.