Prizren is Kosovo’s second largest city and frequently called its prettiest.  The old town area known as the Shadervan surrounds the Sinan Pasha Mosque and spreads along the river and up the slopes behind. 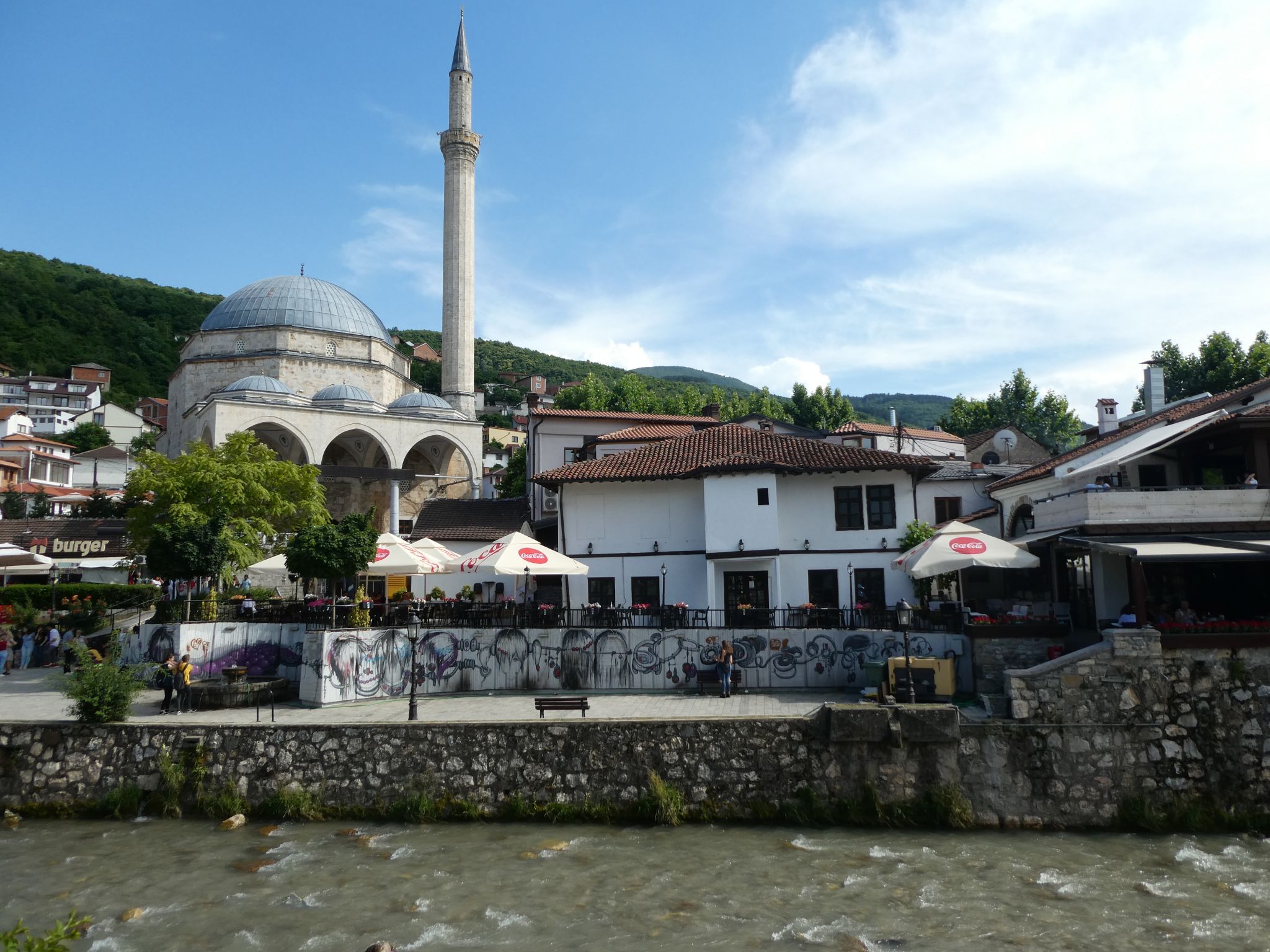 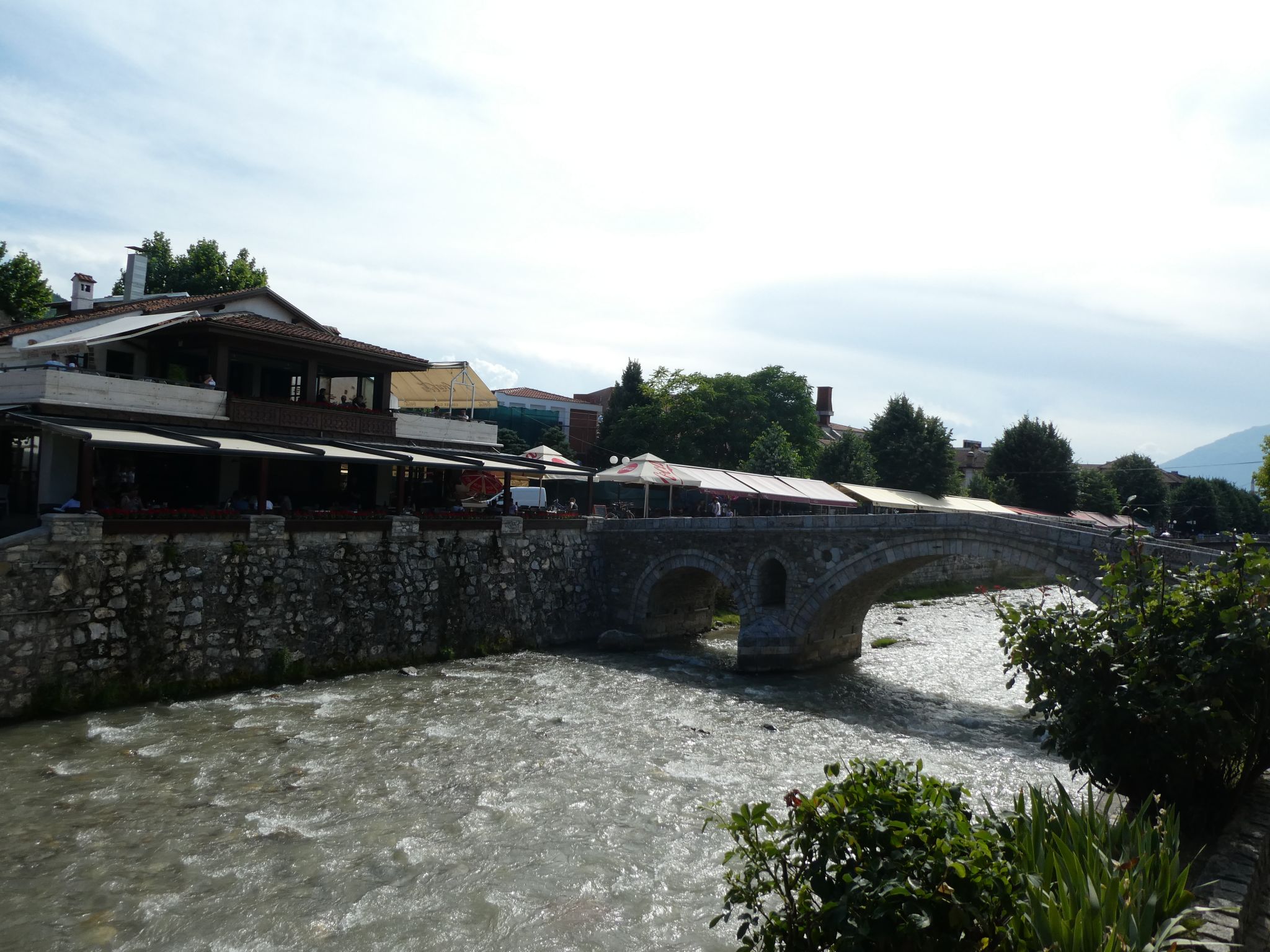 Overlooking  it all is the old fort, from which there are fabulous views of the city.  From the fort wall we counted 28 mosques in the central city area. 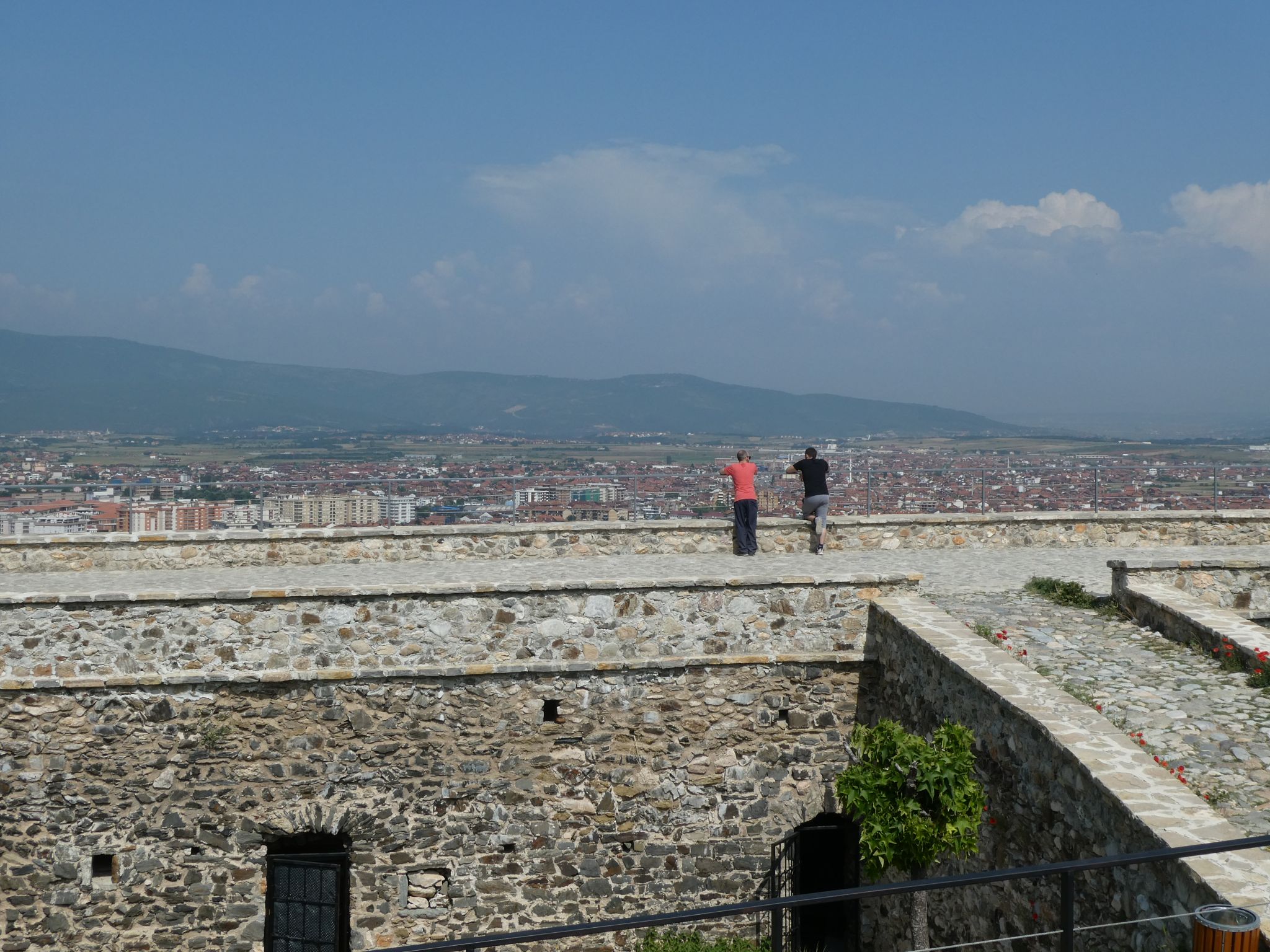 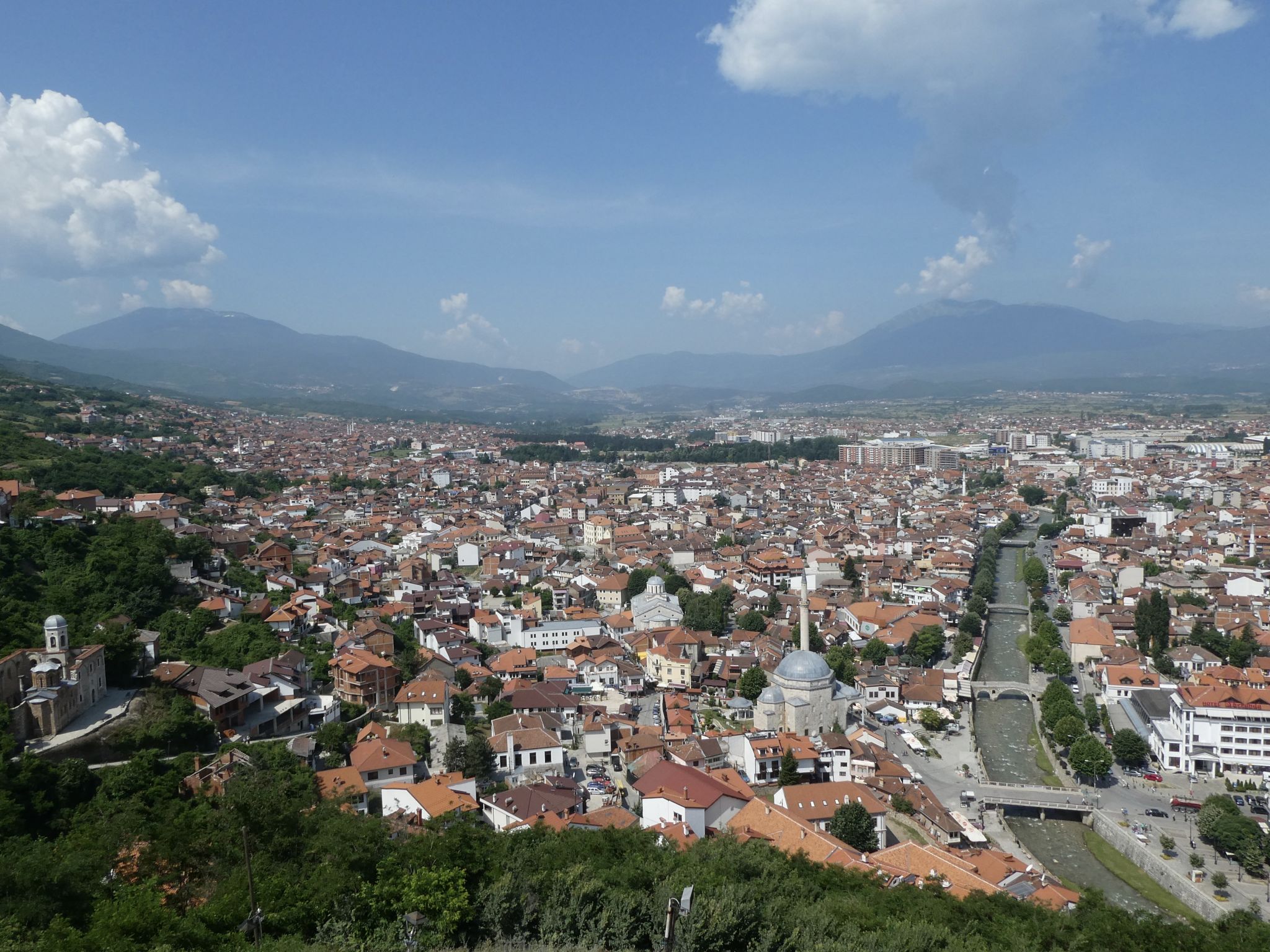 The tiny Church of Holy Sunday sits almost in the shadow of the fort walls, surrounded by trees and closed to entry since the violence of the 1990s. 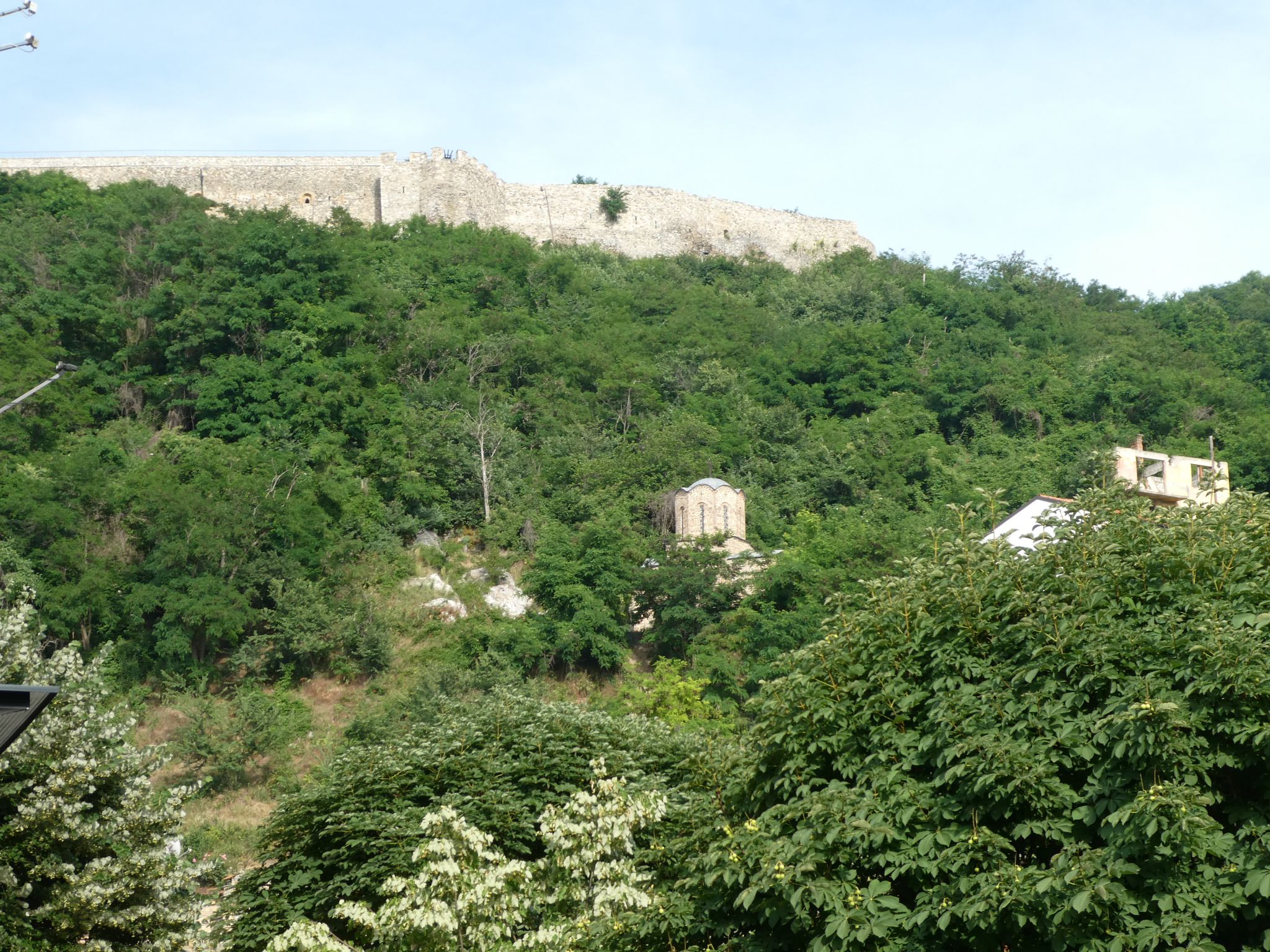 The physical buildings of Prizren were largely spared from damage during the 1990s war but the population was not.

In the 1990s war, Kosovo Albanian paramilitaries known as the Kosovo Liberation Army (KLA) seeking to establish an independent Kosovo fought the Serbian army’s attempts to maintain the territory as part of the Republic of Serbia.   Most of the Albanian population was forced out or fled Prizren.  When the war ended in mid 1999 with the withdrawal of Serbian forces, most of the Albanian population returned and most of the Serbian and other minorities fled.  Since then, Prizren’s population is overwhelmingly Albanian and Bosnian muslims, with Serbs comprising less than 1%.

The post-war peace was monitored by the United Nations Interim Adminstration in Kosovo (UNMIK) and the United Nations Kosovo Force (KFOR) but the peace was fragile.  There were open calls to avenge Serb atrocities committed during the war and resentment against the UN for prosecuting some KLA members for war crimes.  There was frustration with the time taken for negotiations with the UN over Kosovo’s independence status.

In March 2004, continuing ethnic tensions resulted in riots across the country.  In Prizren, there was destruction of over 50 Serbian homes and systemic burning of several Serbian monasteries and churches despite the presence of German KFOR soldiers stationed in the town.

The UNESCO World Heritage listed Our Lady of Ljevis church built in the 14th century was gutted by fire and, sadly, remains unrestored and barricaded behind barbed wire. 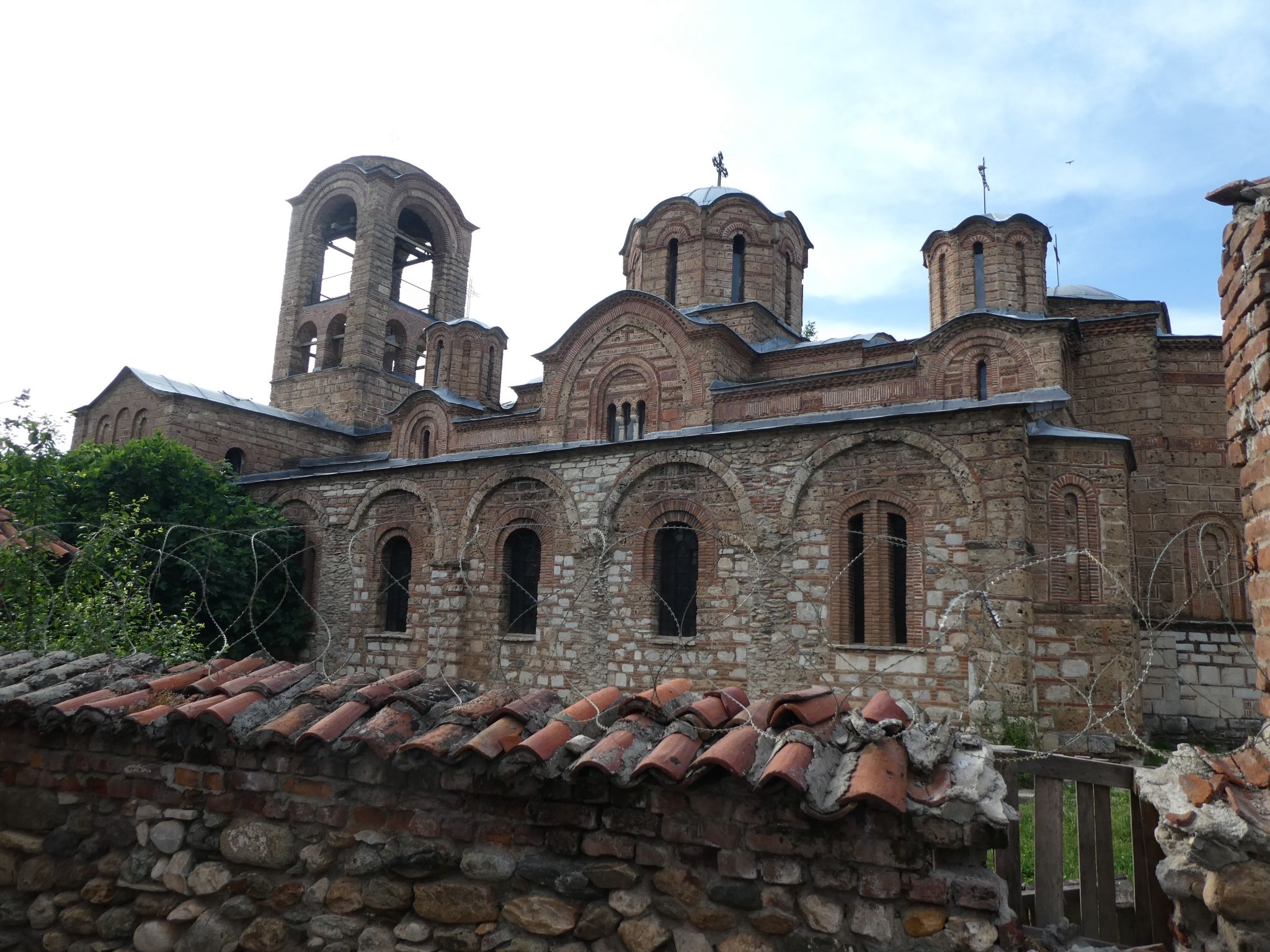 In the middle of the old town itself, the 15th century Church of Saint George was heavily damaged.  It has been restored but remains under guard.  Visitors can wander the grounds but are not permitted to enter the church. 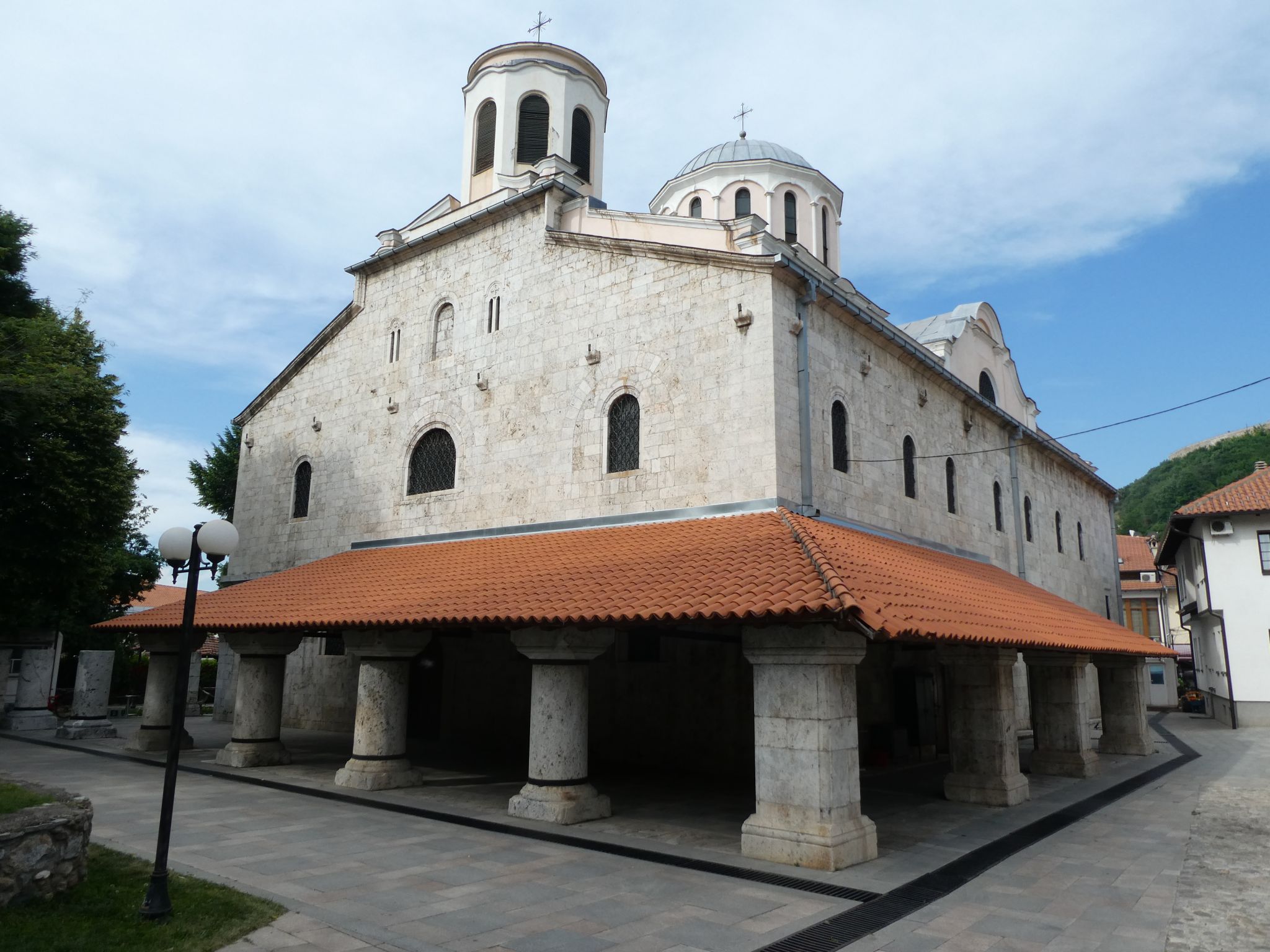 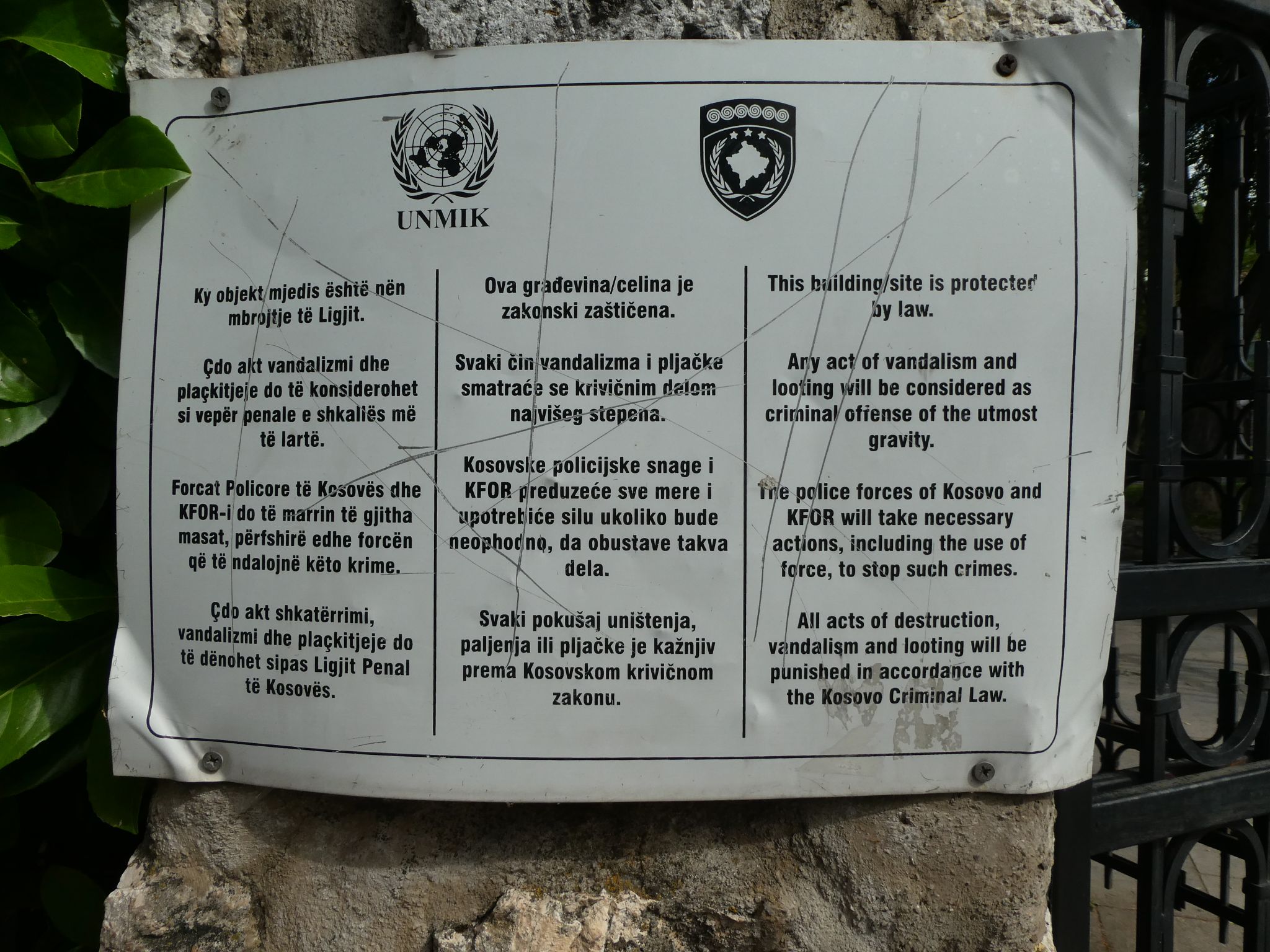 The Church of the Holy Saviour, built around 1330 in a magnificent location on the side of a hill overlooking the old town, was also gutted.  It is in the process of restoration and apparently open for viewing but was closed at the time of our visit. 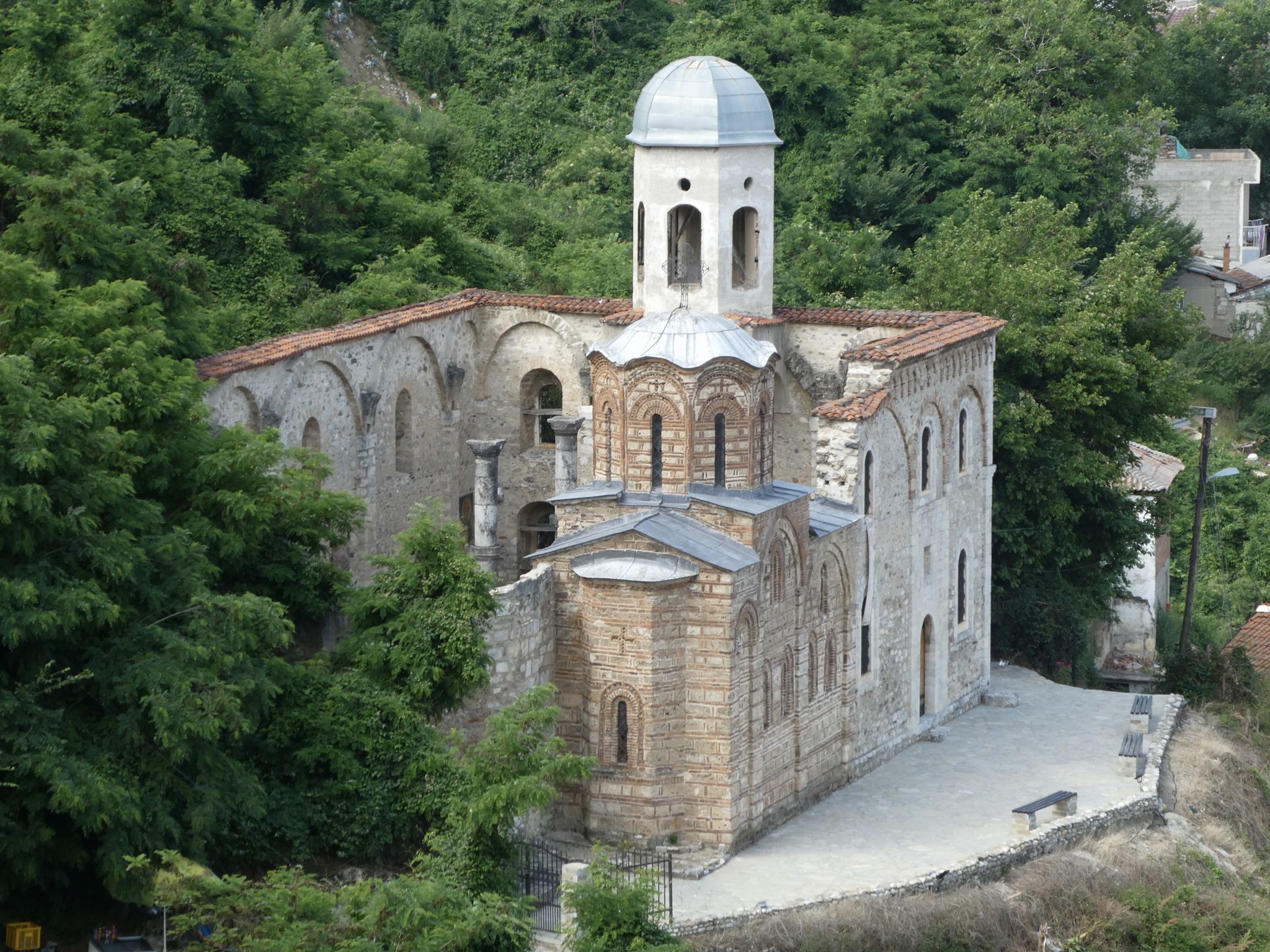 Kosovo was finally granted status as an independent nation by the United Nations in 2008.  So far 113 of 193 UN member countries have recognised its status, as reflected in this monument at the town hall. 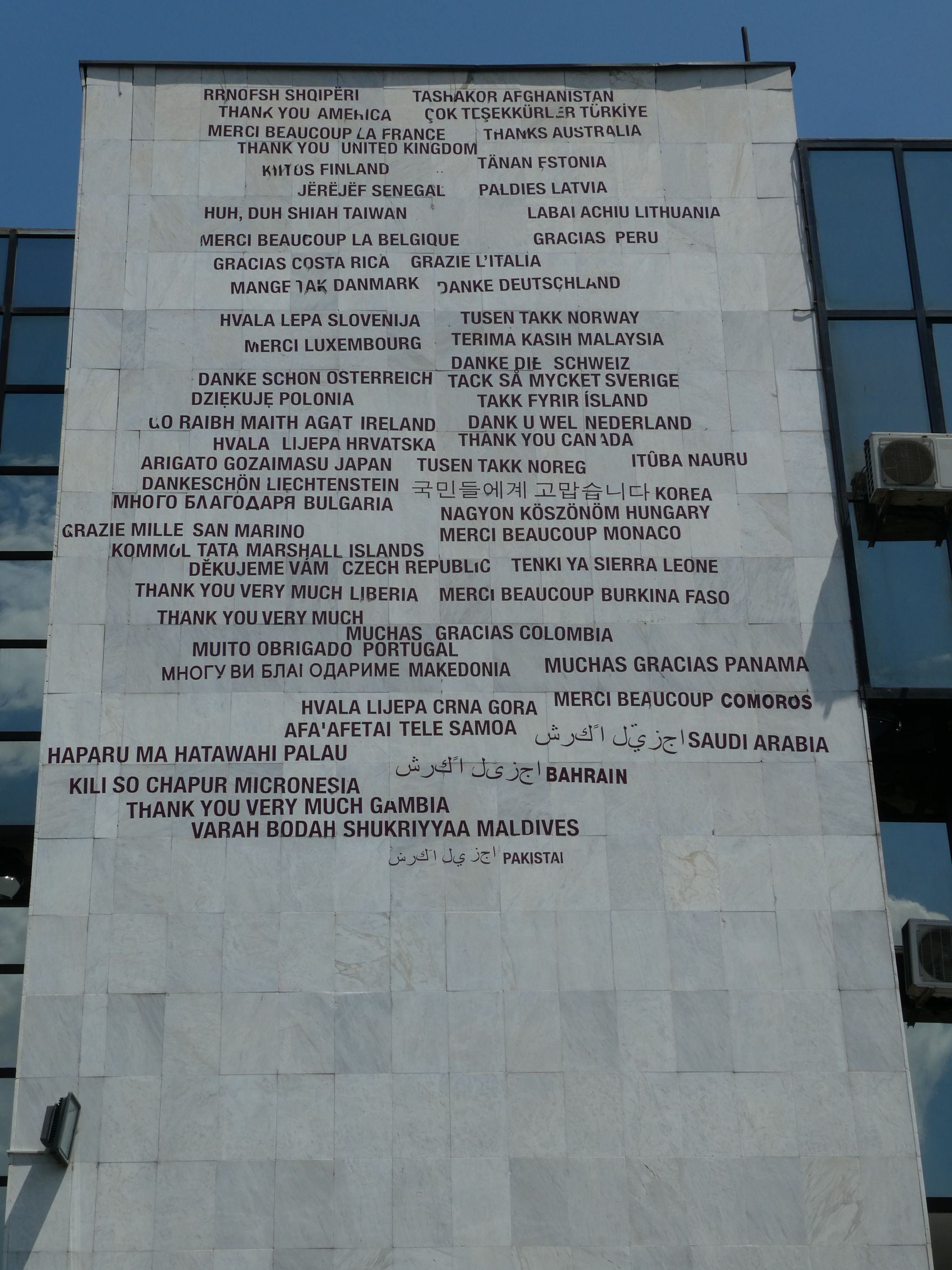 Two things struck us about the plaque.

First, the way they’d captured national character – a formal “Thank you” to America and the United Kingdom, and a plain ol’ “Thanks” to Australia.

And second, there’s plenty of room for further additions.