The capital of Kosovo fared badly during the 1990s war and much of the city is newly built.  The city is compact and really, you can get around on foot and see all of the key sights in a day if you plan a strategic route.

Start at the Newborn Monument, unveiled in 2008 on the day Kosovo declared independence, becoming Europe’s newest country almost 10 years after the bloodshed of its separation from Serbia.

Each year the monument is repainted in a different theme intended to reflect something about the city.  For example, on the first anniversary it was re-painted in the flags of the countries which have recognised its independence.  On the 10th anniversary earlier this year, the ‘BO’ was replaced with a ‘10’ painted in gold.

However, Kosovo remains economically stressed, highly dependent on foreign aid and is the poorest of the former Yugoslavian states. The euphoria of independence has been tempered by this economic reality and that seems to be reflected in the current state of the monument. 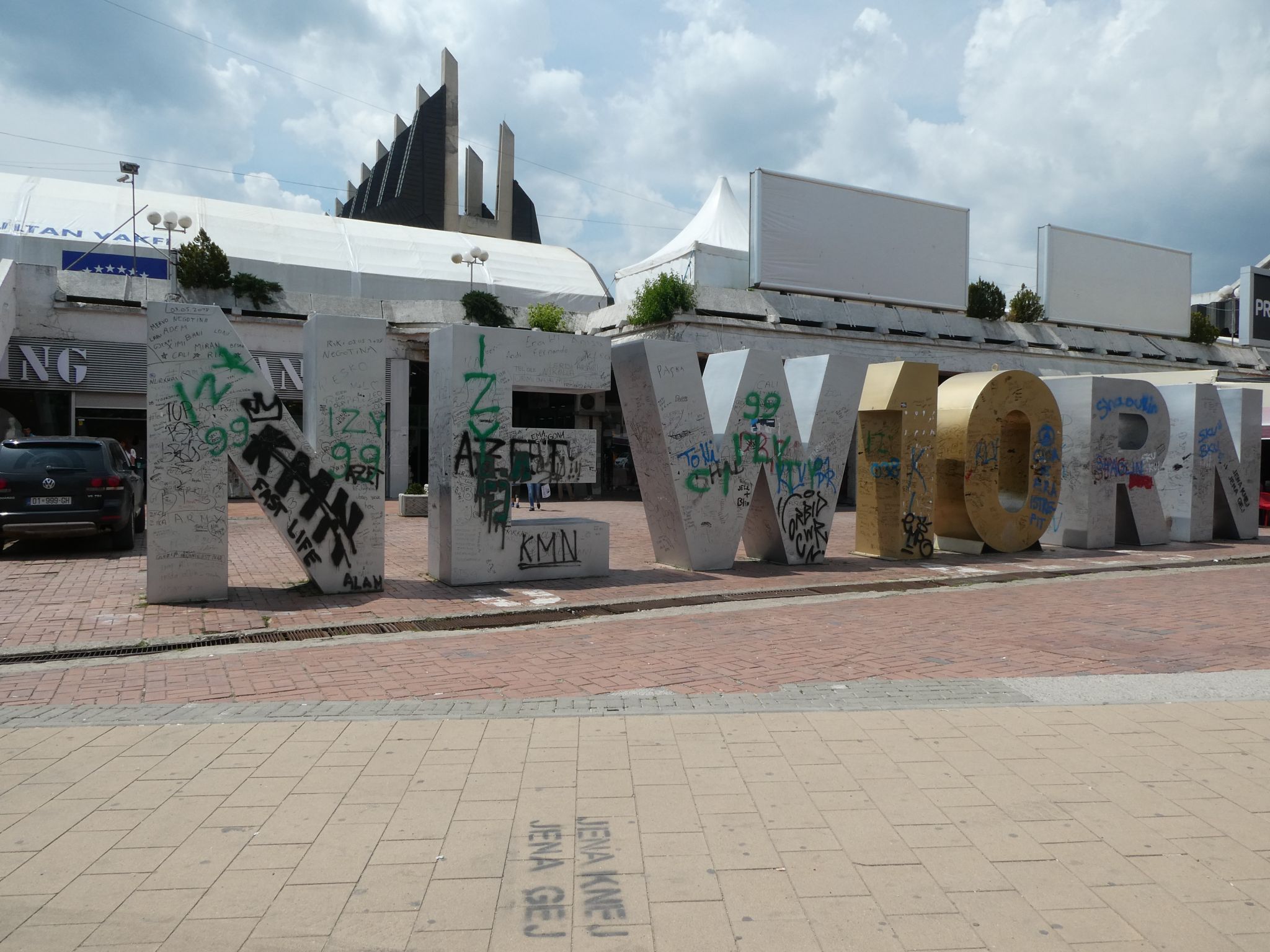 Across the road, a more poignant memorial has been recently installed.  The Heroinat Memorial is a 3D image of a woman’s face in profile, constructed from 20,000 cast bronze medals, recognising the 20,000 women raped during the 1990s war.  Although it has been recognised that rape was systematically used as a weapon of war against civilians in that conflict, the vast majority of those war crimes have gone unpunished. 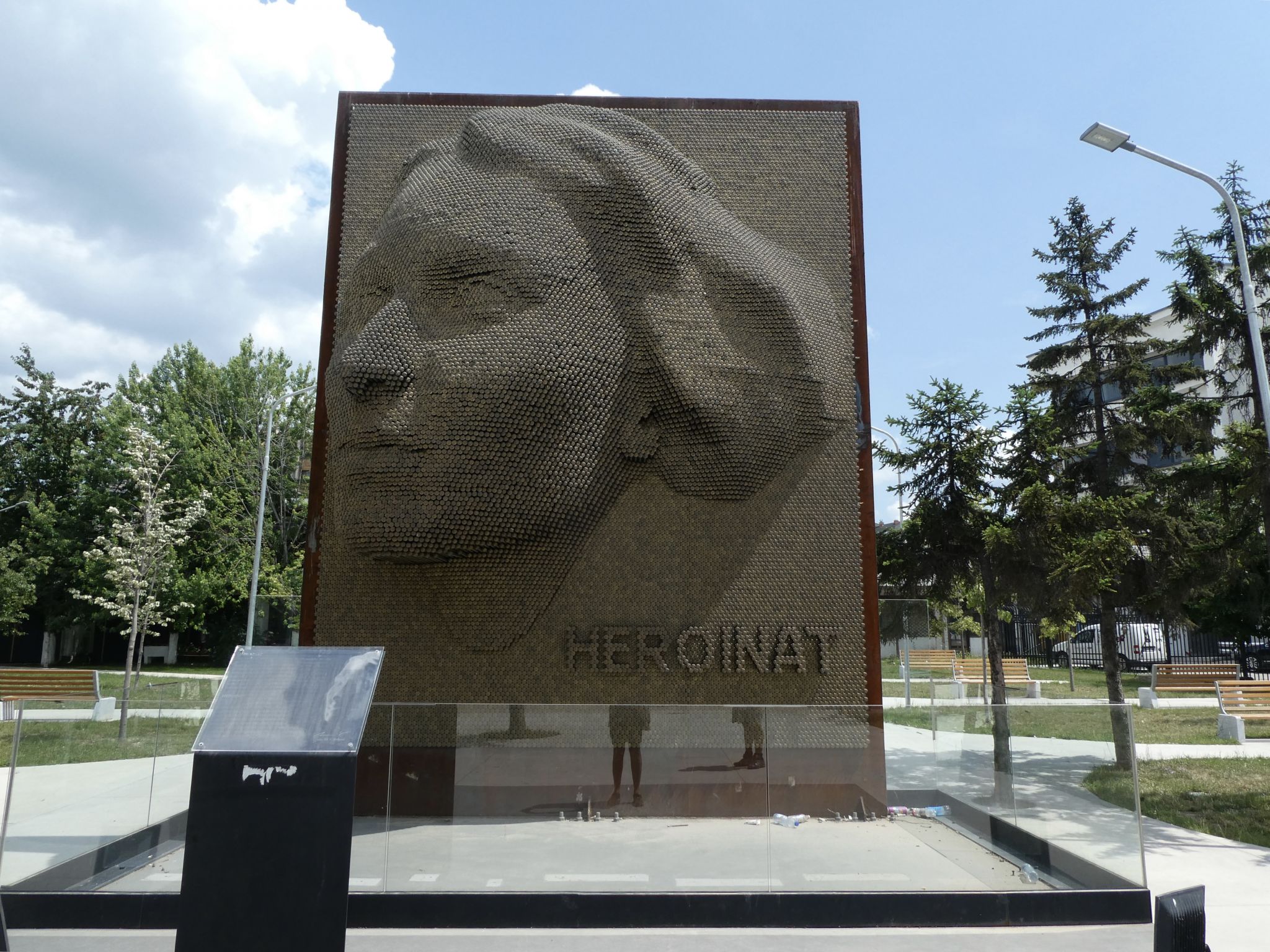 A few blocks further on is a three metre high bronze statue of Bill Clinton unveiled in November 2009, together with a plaque with a sappy message from Bill. 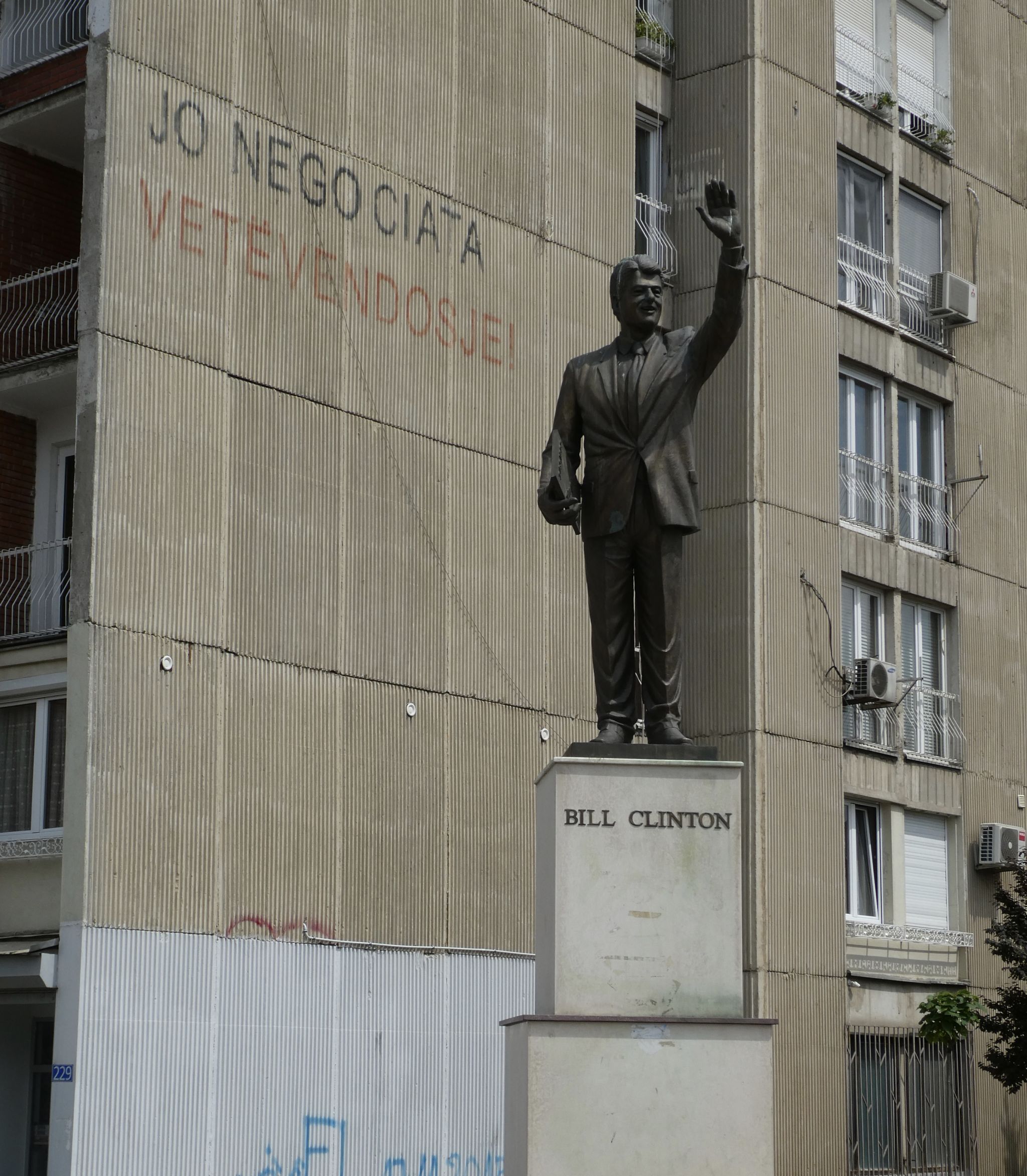 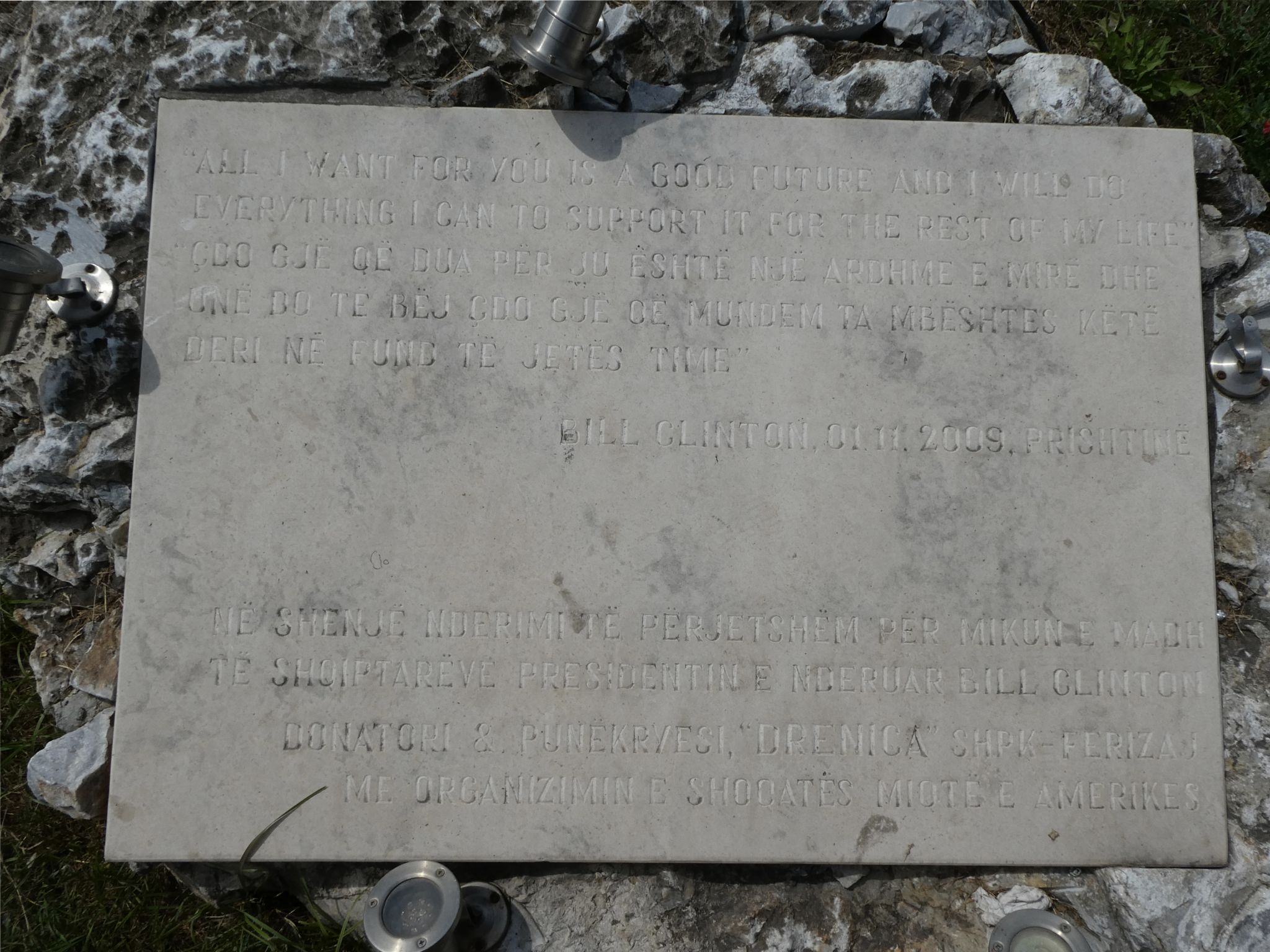 The 1990s war ended with the withdrawal of Serbian troops after 78 days of NATO bombing spearheaded by the United States.  Kosovo then operated under a UN monitored interim administration for another nine years before its independence was finally declared in 2008.

Many Kosovans see Clinton as a hero whose involvement led to the liberation of their country.  But as with all such things, attitudes to the American intervention differ.  The graffiti on the wall next to the Clinton statue reads “No negotiations.  Self-determination”.  It is the slogan of Vetëvendosja, a nationalist political party which opposes foreign involvement in Kosovo’s internal affairs.

On a lighter note, it cannot be a coincidence that the shop almost next door to the statue is called Hillary.  A couple of almost-pant suits were on display in the window.  Sadly, no white ones. 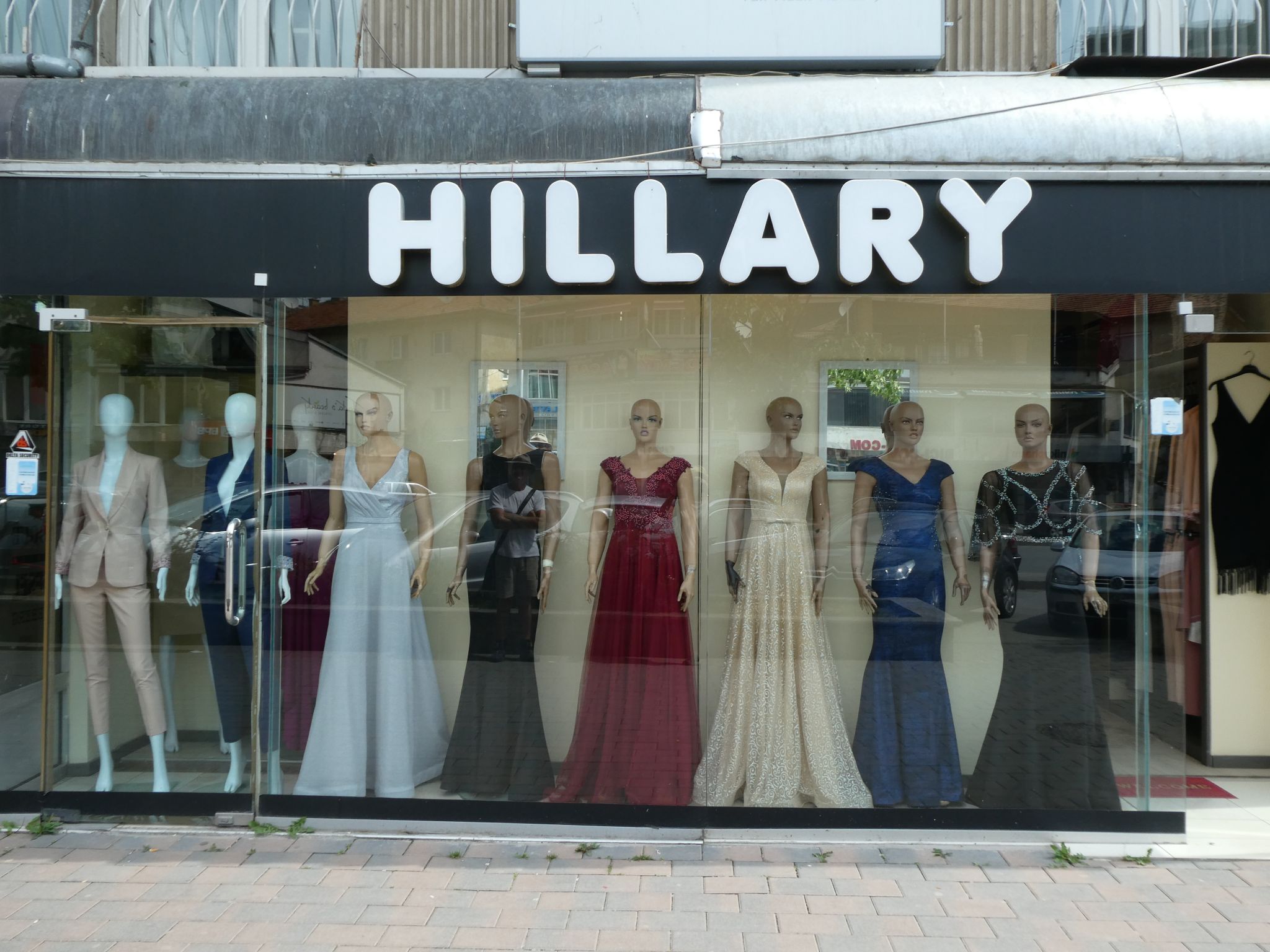 Naming streets after respected public figures is common in this part of the world.  We had already noted Madeleine Albright Boulevard and General Wesley Clarke Boulevard in Peja.  The Clinton statue and the Hillary frock shop are on Bill Klinton Boulevard. 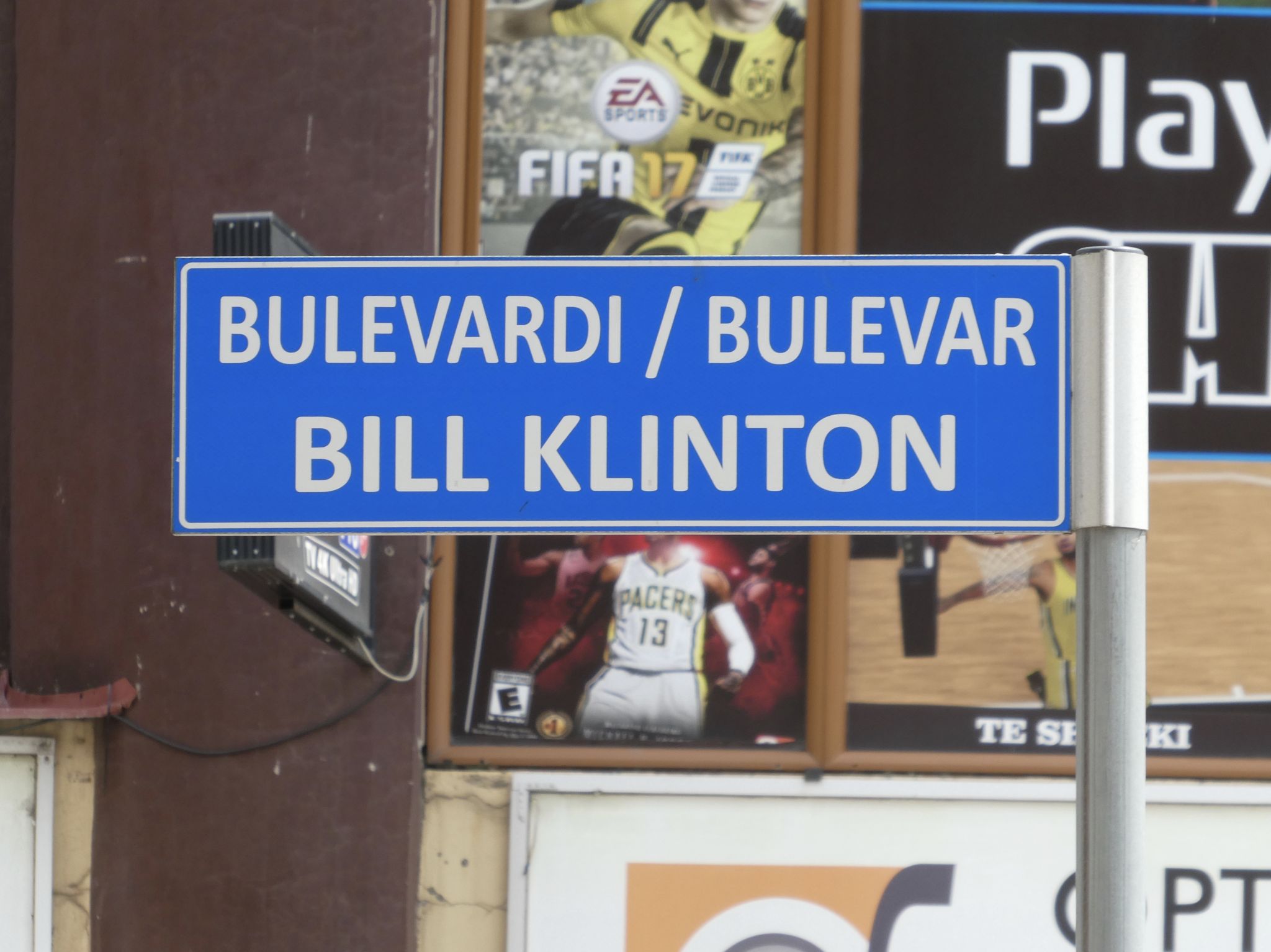 There’s also a Xhorxh Bush (George Bush) Boulevard because he continued the US policy of support for an independent Kosovo.  Disappointingly, Bill Klinton Boulevard and Xhorxh Bush Boulevard meet but there’s no signage at the intersection.

Next up on the walk around is Mother Teresa Cathedral.  Yes, she gets a look-in here as well. We are starting to think there isn’t a place in the Balkans that doesn’t claim her.  Oh, and she also gets the main pedestrian boulevard and a statue as well. 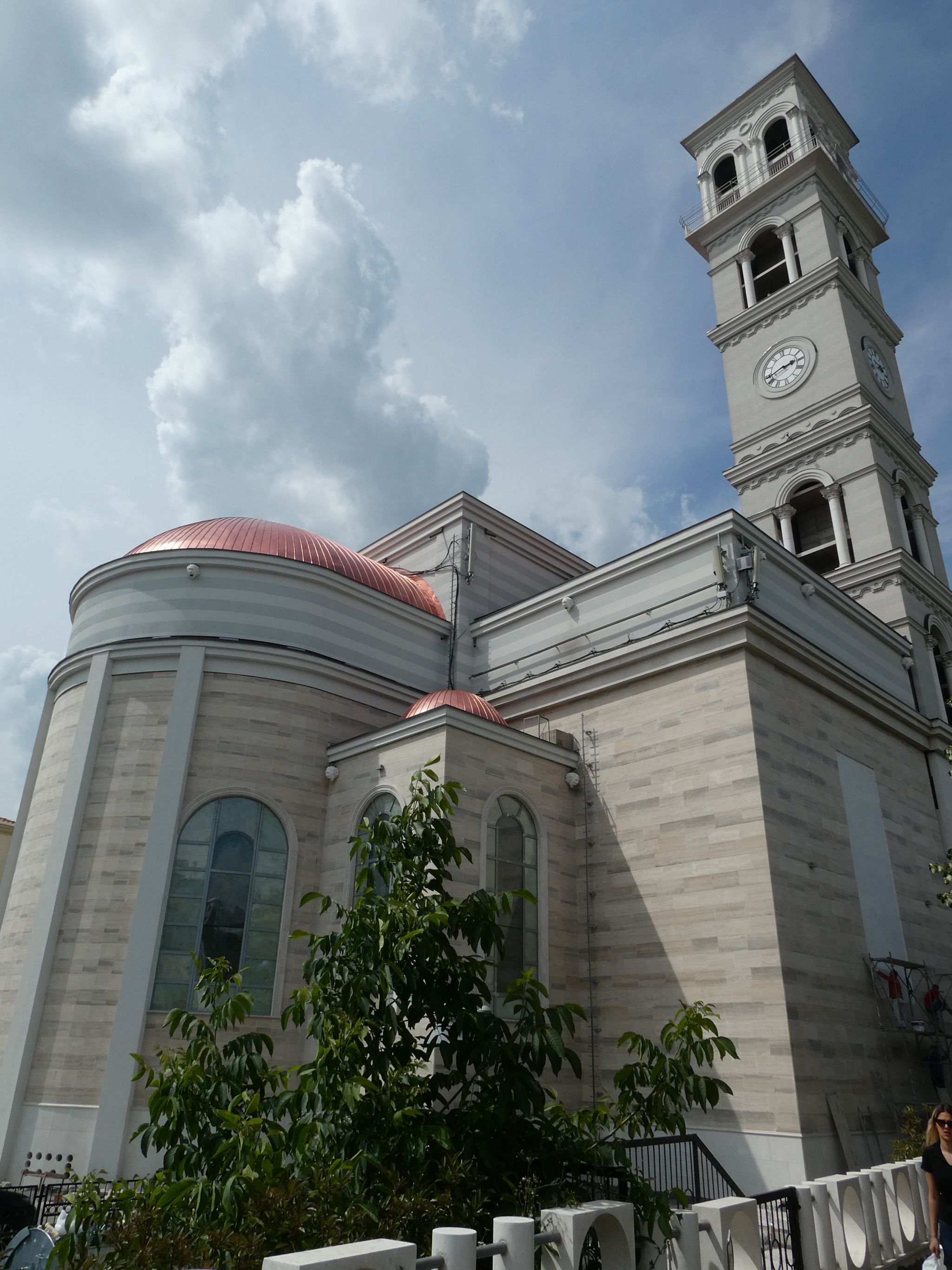 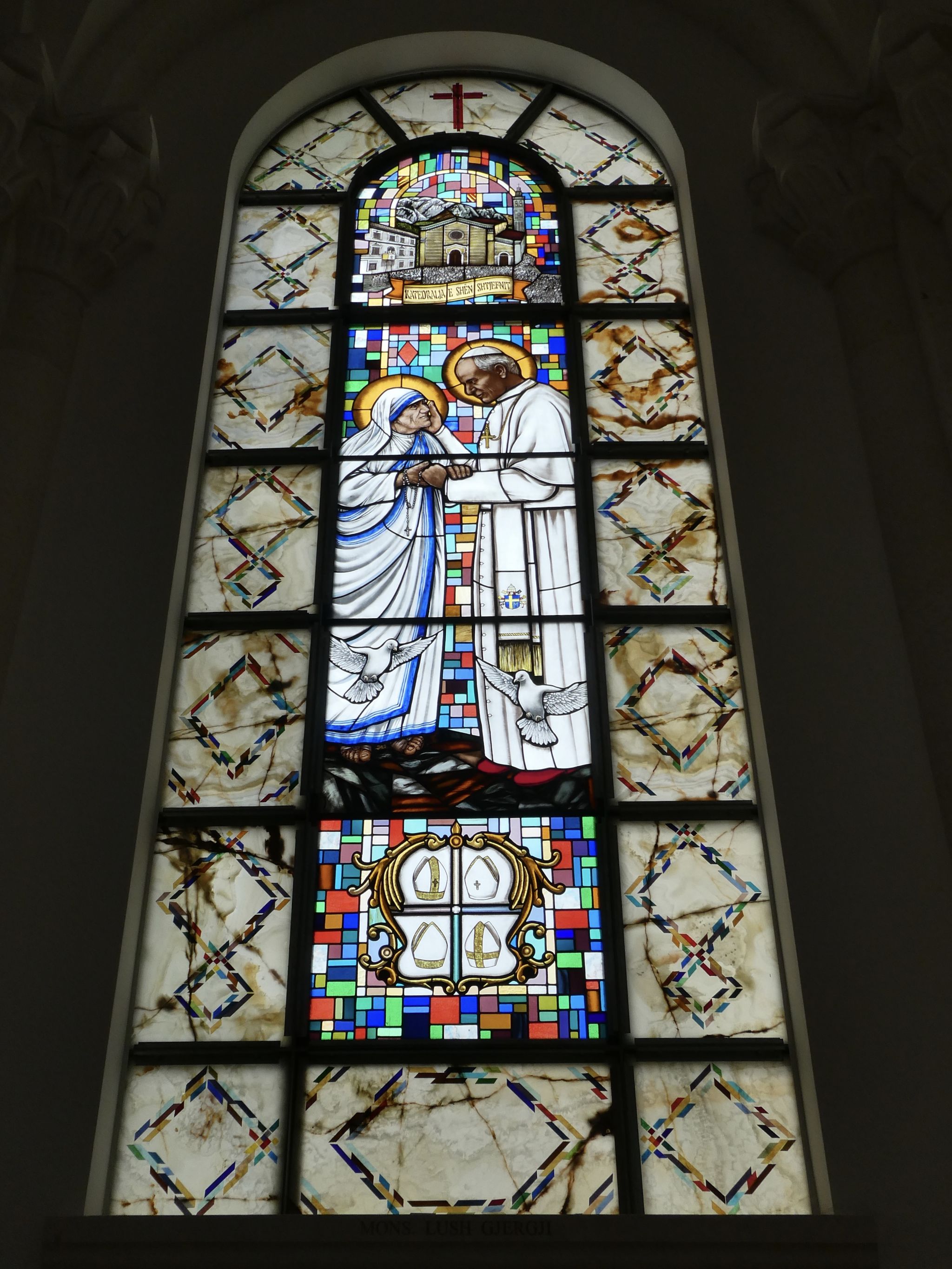 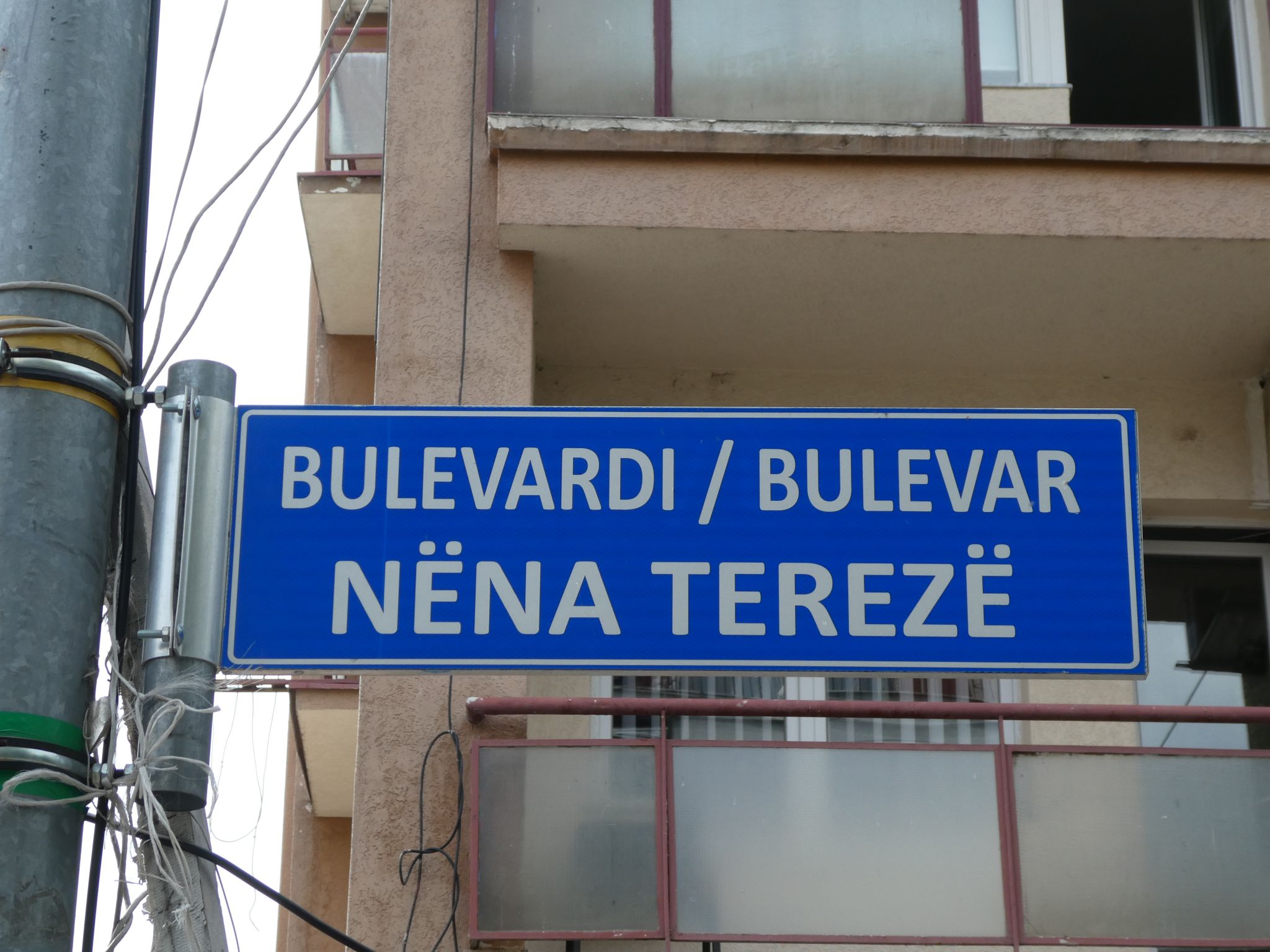 From the cathedral, a stroll through the grounds of the University will bring you to the National Library.  It was constructed in 1982, during the Yugoslavian era when religion was banned.  According to some, the domes symbolise the traditional white plis hats worn by Muslim men and the steel framework encasing the building is a subliminal message of repression by the then regime.

It’s also been described as “gelatinous eggs wearing armour” and “ugliest building on the planet”.  We thought it looked like a mechano set.  Or maybe it was designed to stop hysterical university students leaping from the windows in the lead up to exam week. 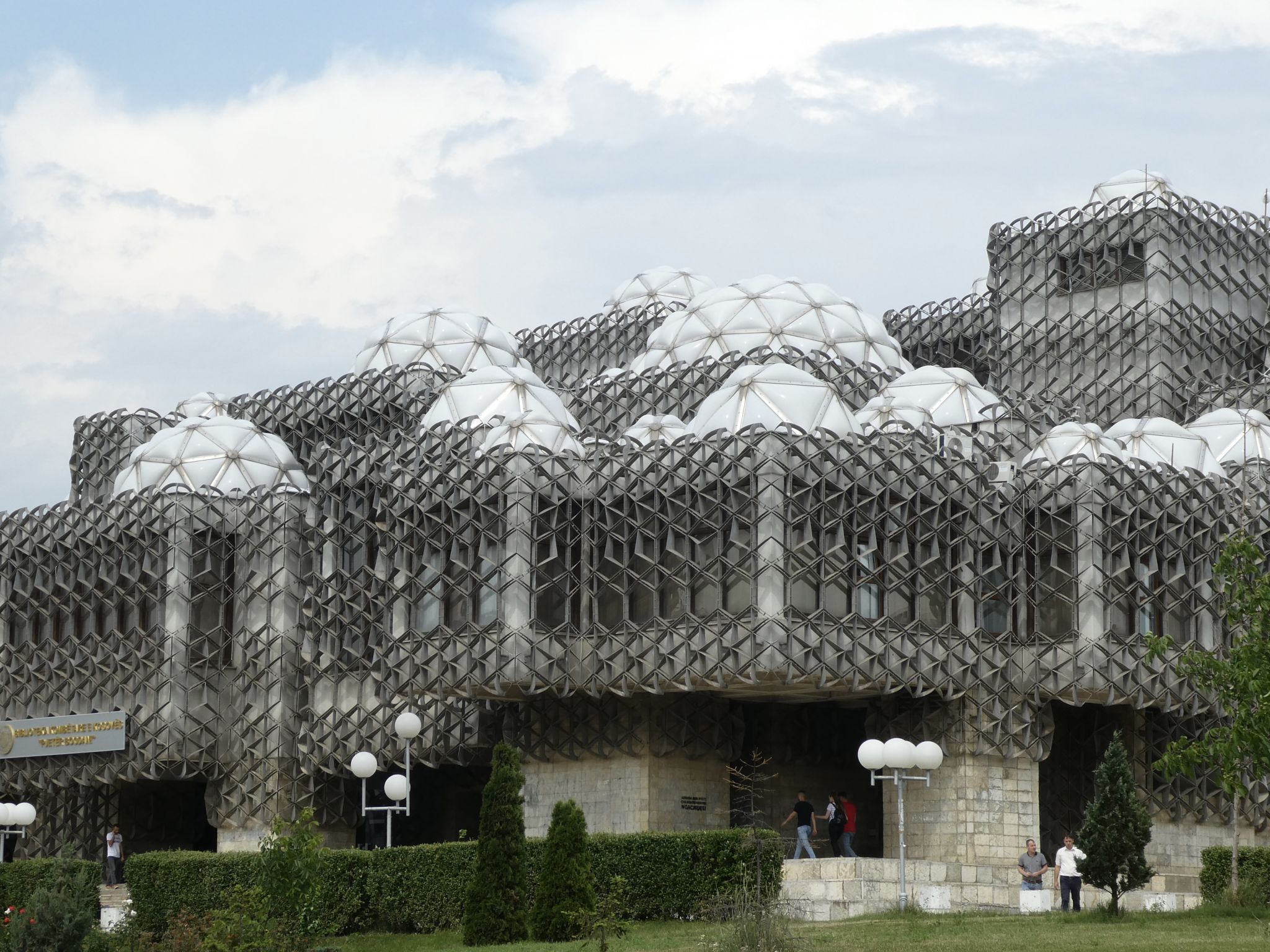 Nearby is the incomplete Orthodox Church of Christ the Saviour.  Commenced in 1995, work ceased due to the 1990s war and it remains just a shell. 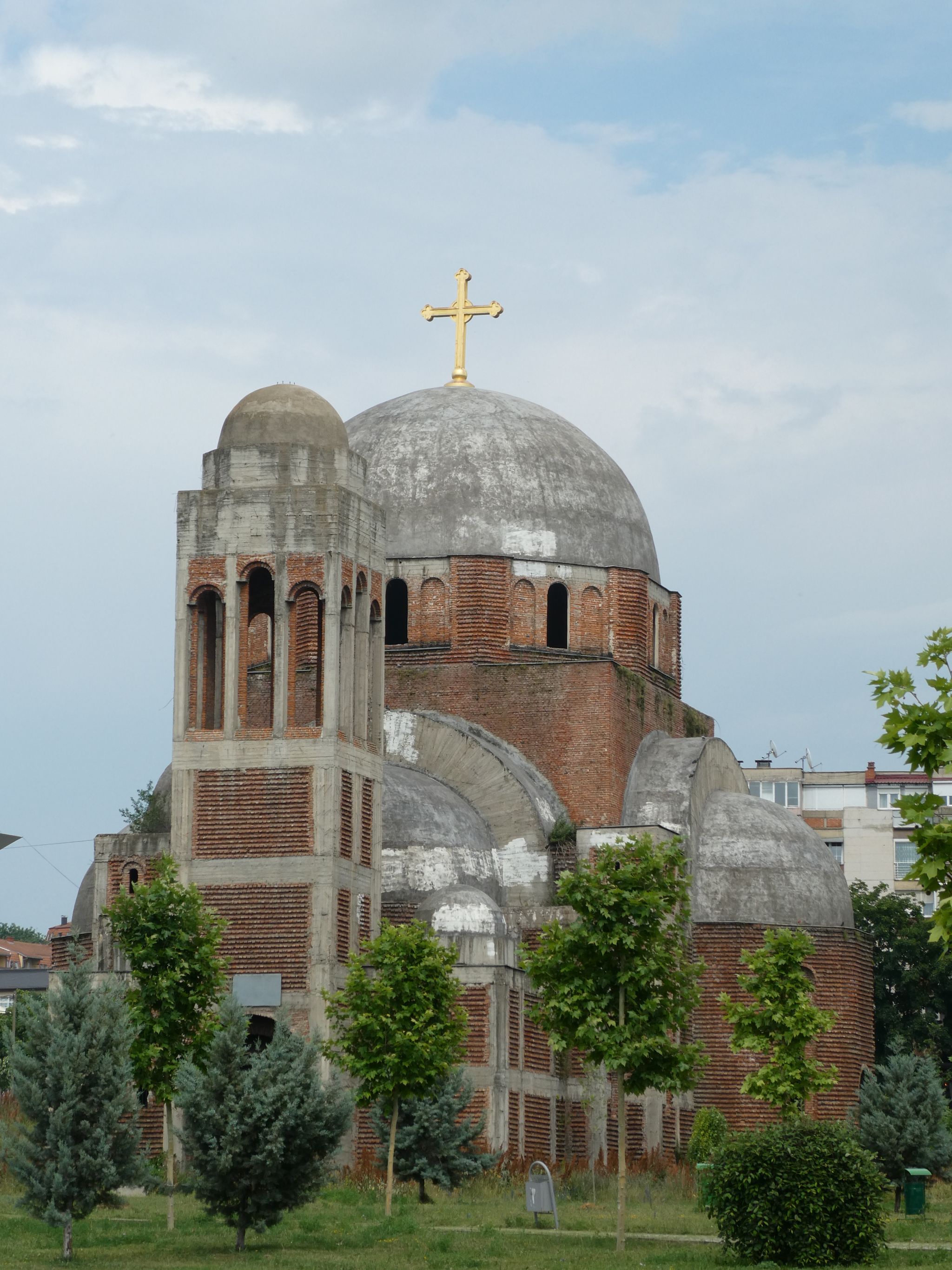 A short walk away is Pristina’s oldest building, the Carshi Mosque whose foundations have been dated to 1392.  It has been renovated many times over the centuries, and indeed more work was being done when we visited.  The original stone minaret has survived intact for over 600 years, which seems a remarkable feat considering the tumultuous history of the area. 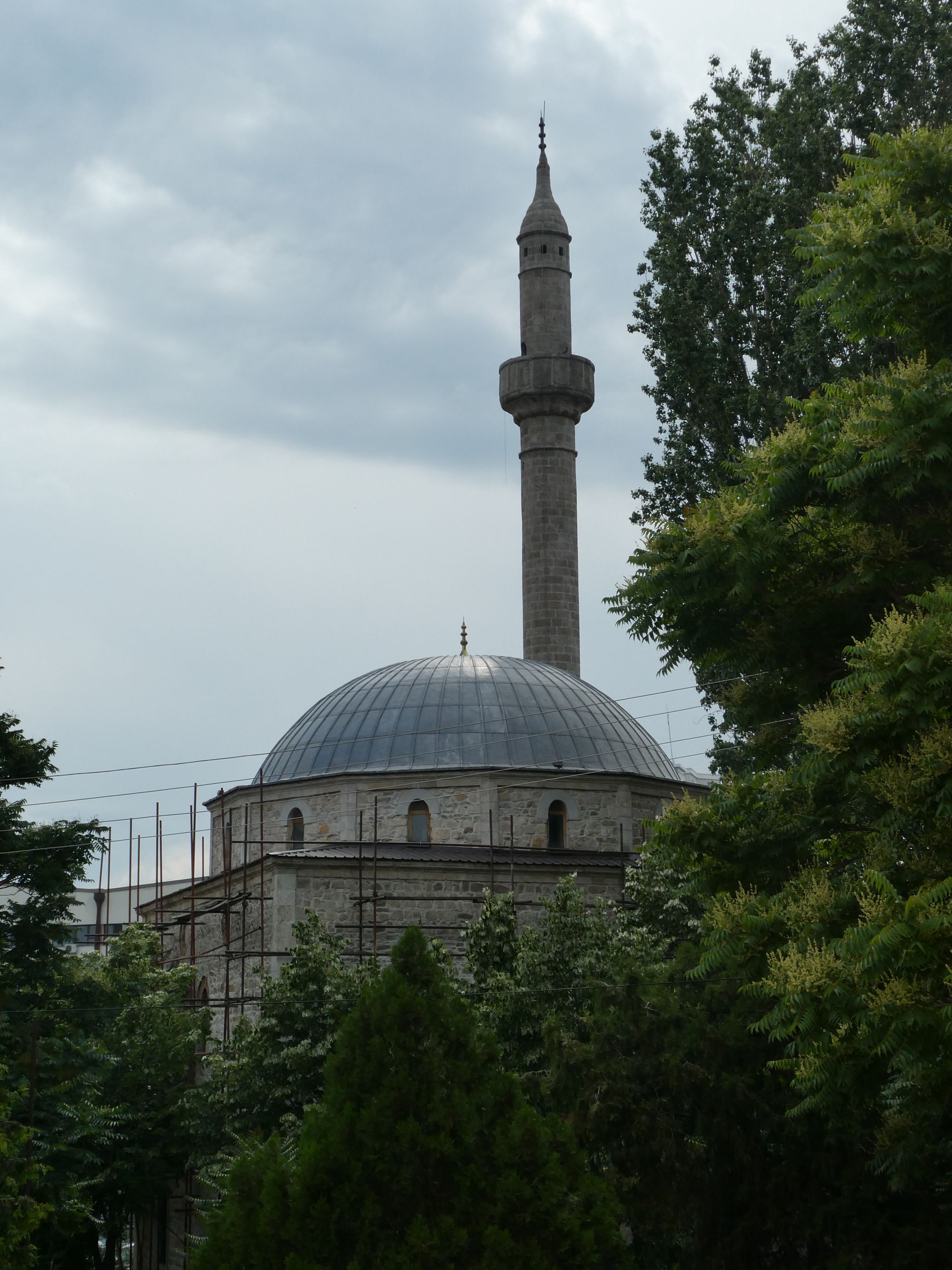 Nearby is the Kosovo Museum.  It was not open when we visited, but this wasn’t obvious because both the gate and the front door were open.  We’d walked into the first gallery by the time we were noticed.  They were setting up a new exhibition and helpfully let us wander around.

In addition to the usual history exhibitions, the museum has a very interesting gallery of photographs taken in ‘real time’ by a young Kosovan who lived through the bombing of Pristina.  Along with thousands of others, he and his family were forcibly expelled from the city by occupying Serb forces and he managed to smuggle his camera and films out.

There is also a room displaying a copy of the declaration of independence and the flags of the countries which have recognised Kosovo. 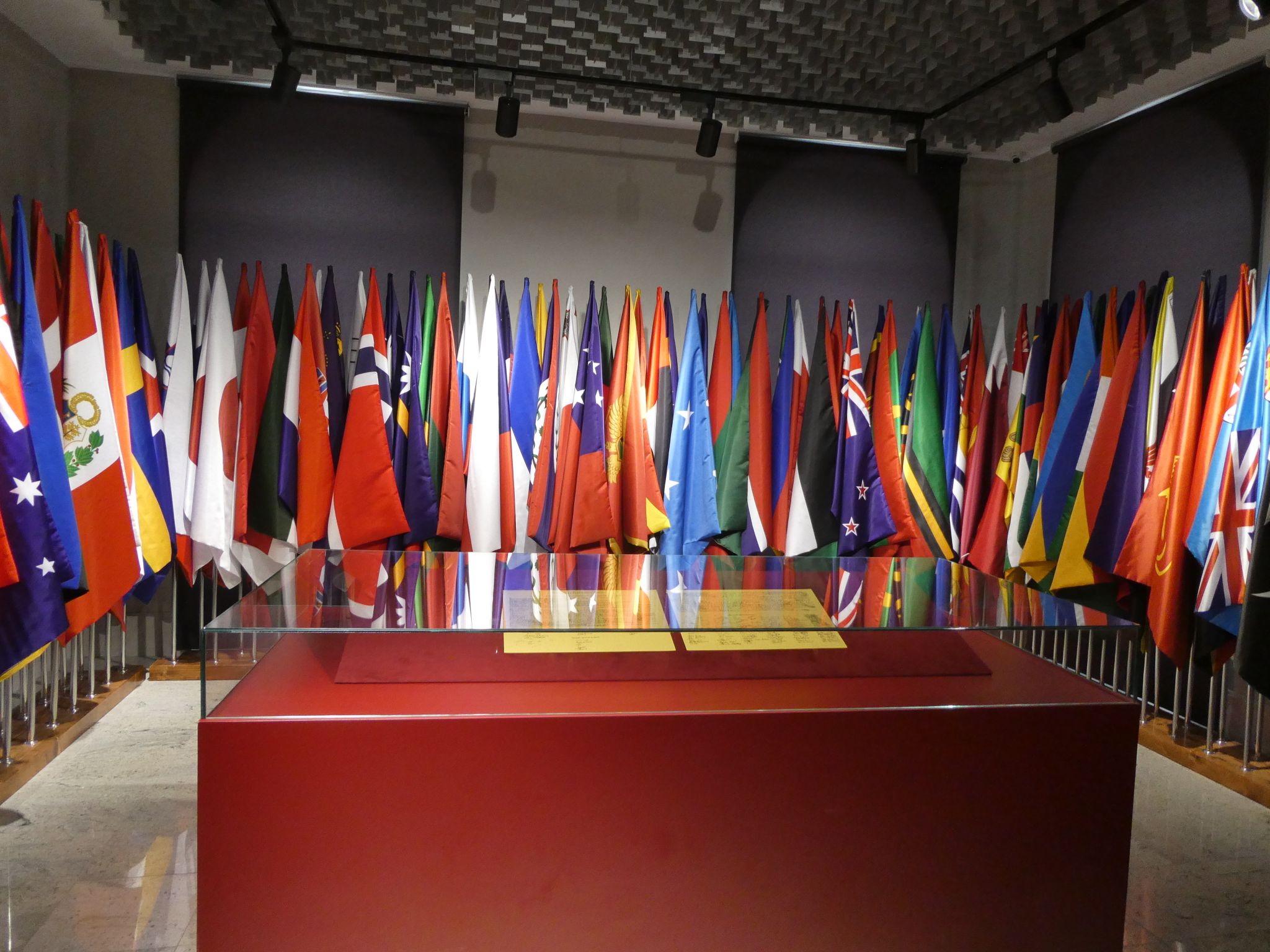 The museum is on the edge of the old town, which was all but destroyed in the 1990s war and has been reconstructed in traditional style.  It’s worth a wander around.

We also used Pristina as a base for a visit to Gracanica and the Bear Sanctuary.

Gracanica is a village about ten kms from Pristina, easily accessible by a local bus from the main Pristina bus station.  A traditionally Orthodox area, the village is centred around the 13th century Gracanica Monastery.

As the bus entered Gracanica we noticed a monument we had not heard mentioned in any of our reading.  The bus dropped us in the middle of the village and we walked back for a closer look.  It’s in the grounds of an Orthodox Community Centre on the edge of town.  Deliberately referencing the ‘Newborn’ monument in Pristina, this one comprises the word ‘Missing’ and affixed to it are photographs and the names of some 500 orthodox Serbs unaccounted for since the 1990s war.

The aggression of Serbian forces and local Serbian-aligned paramilitaries toward ethnic Albanian Kosovars is highlighted in State-sponsored museums and monuments.  This memorial is a poignant reminder that in war, atrocities can be, and this case were, committed by both sides. 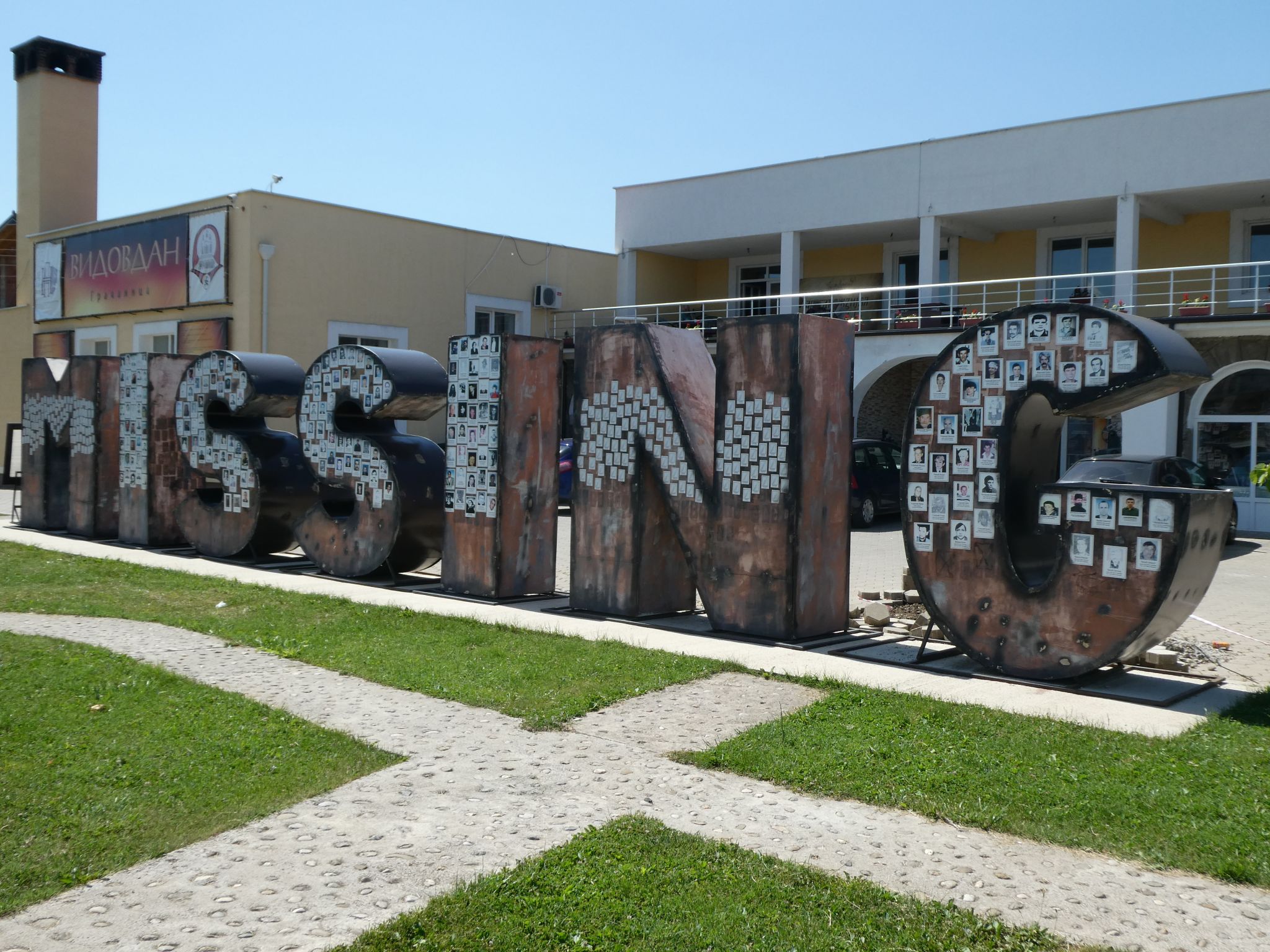 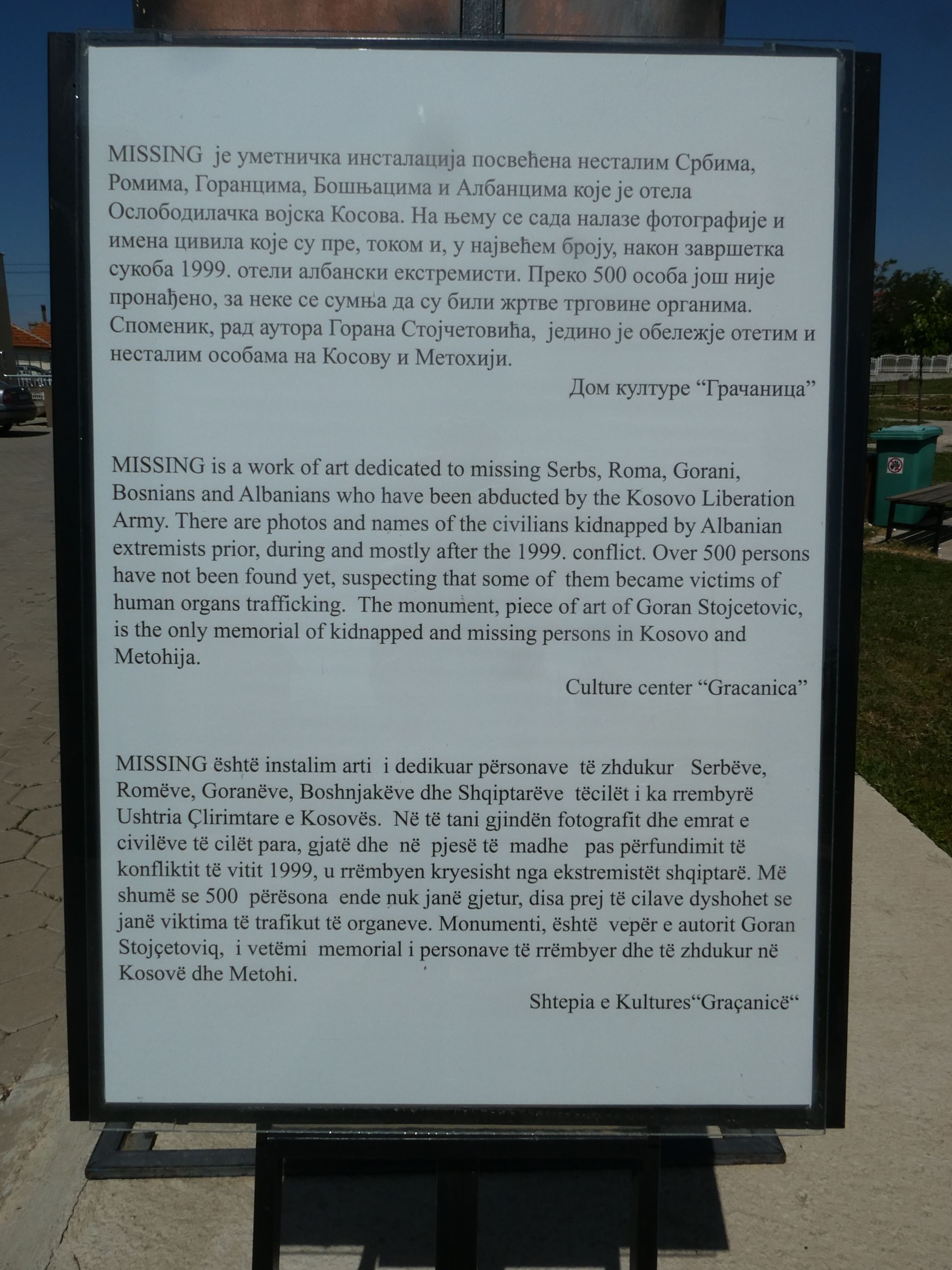 The Gracanica Monastery is an oasis of calm with vast lawned grounds and ancient buildings hidden behind a stone perimeter fence, where an active community of Orthodox nuns still lives. 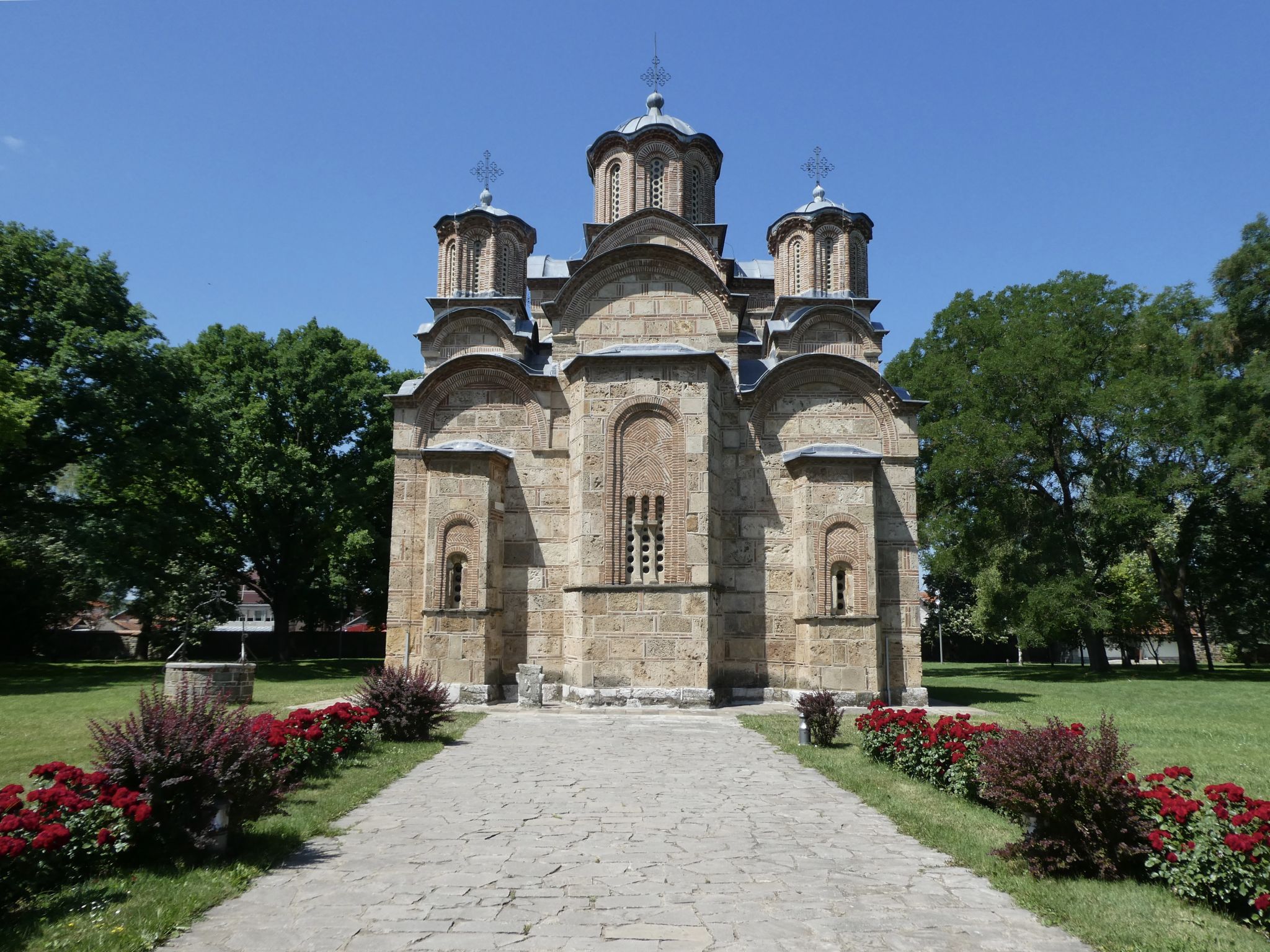 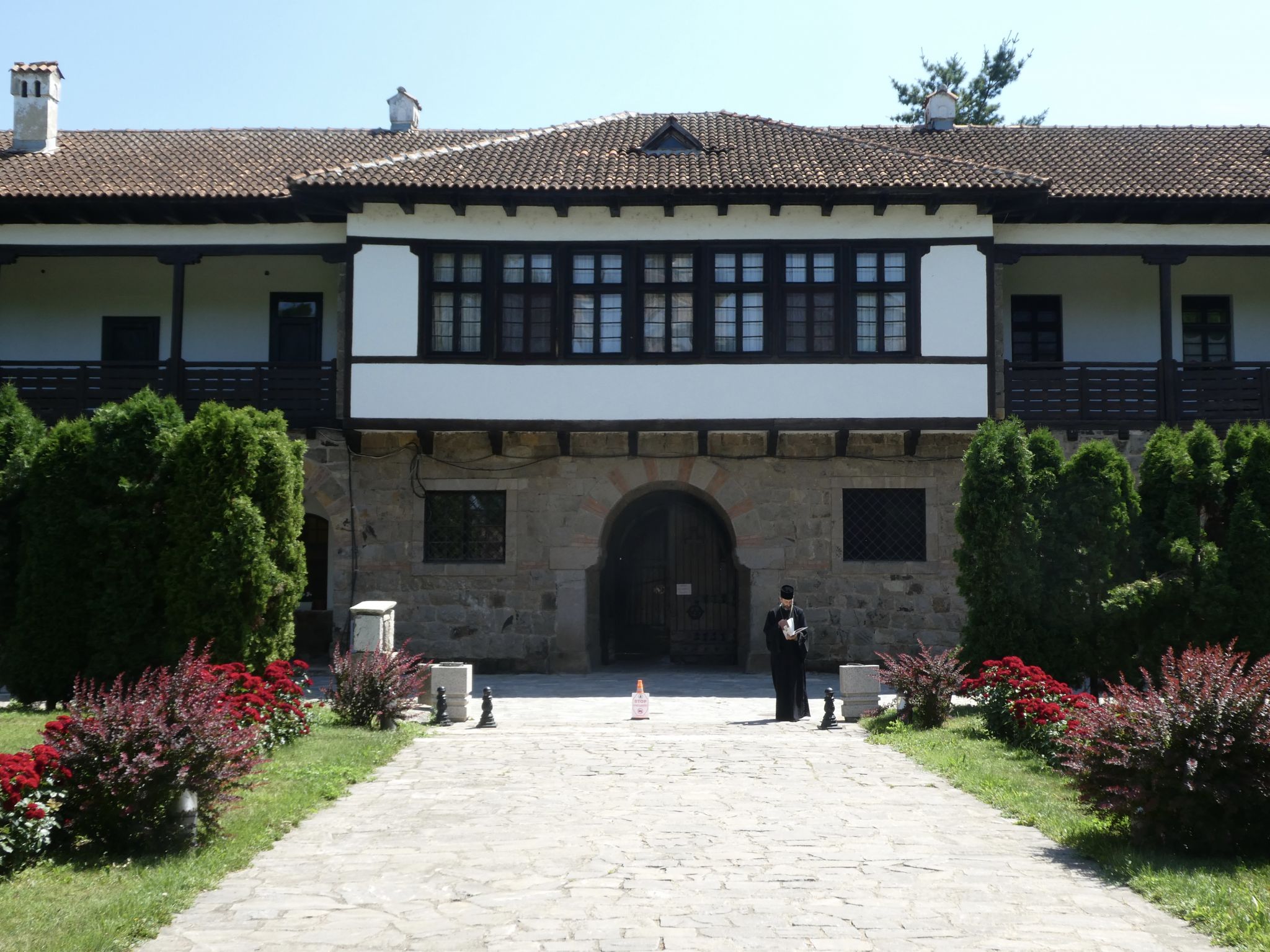 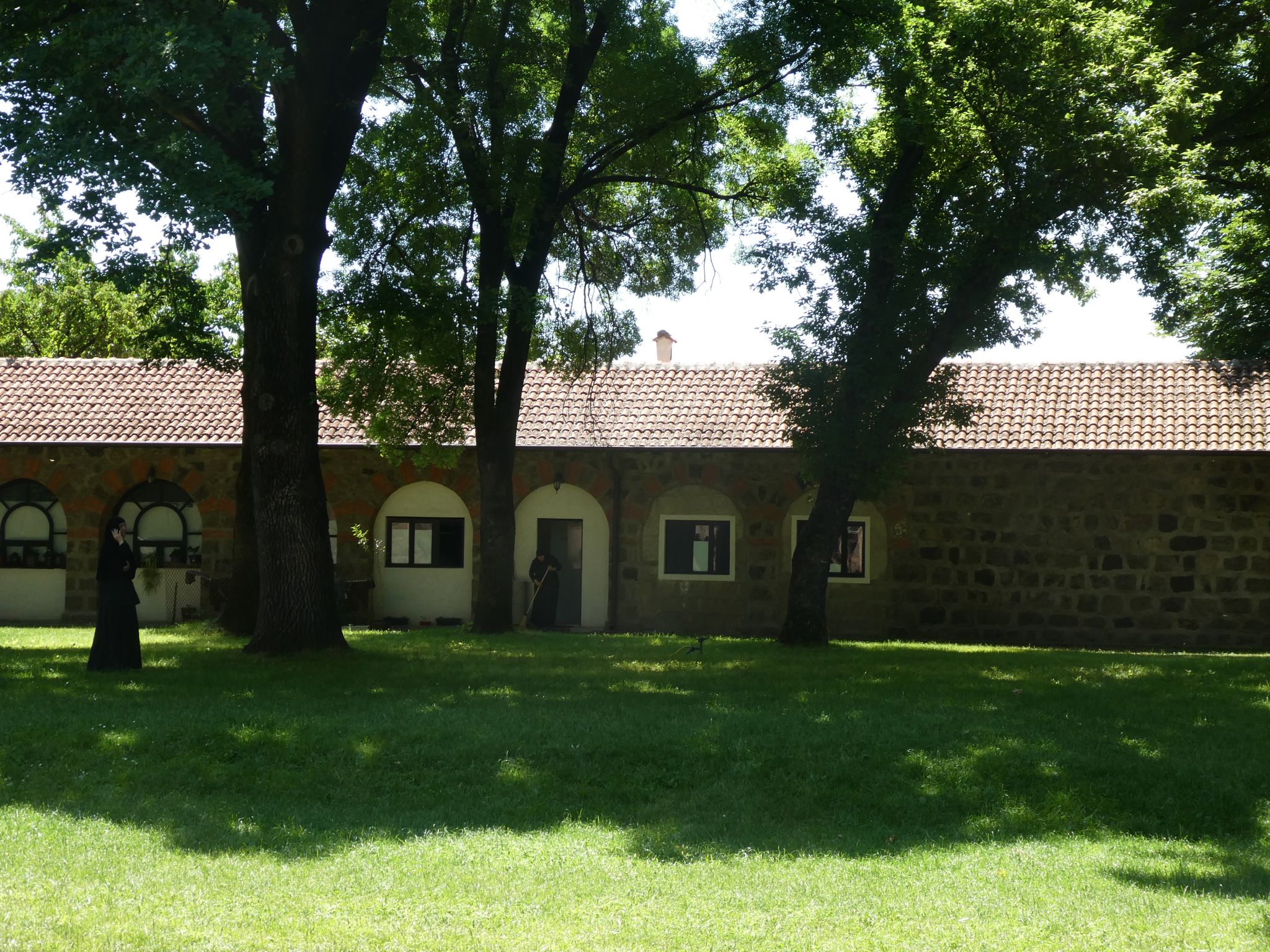 The church contains some incredible frescoes which have been painstakingly restored to their original glory.  They are similar in style to those in the Decani Monastery (see previous post on Peja).  Photography is forbidden, but Julie did sneak this snap of an unrestored fresco.  Just in case you were wondering what happens to naughty folk when they die…. 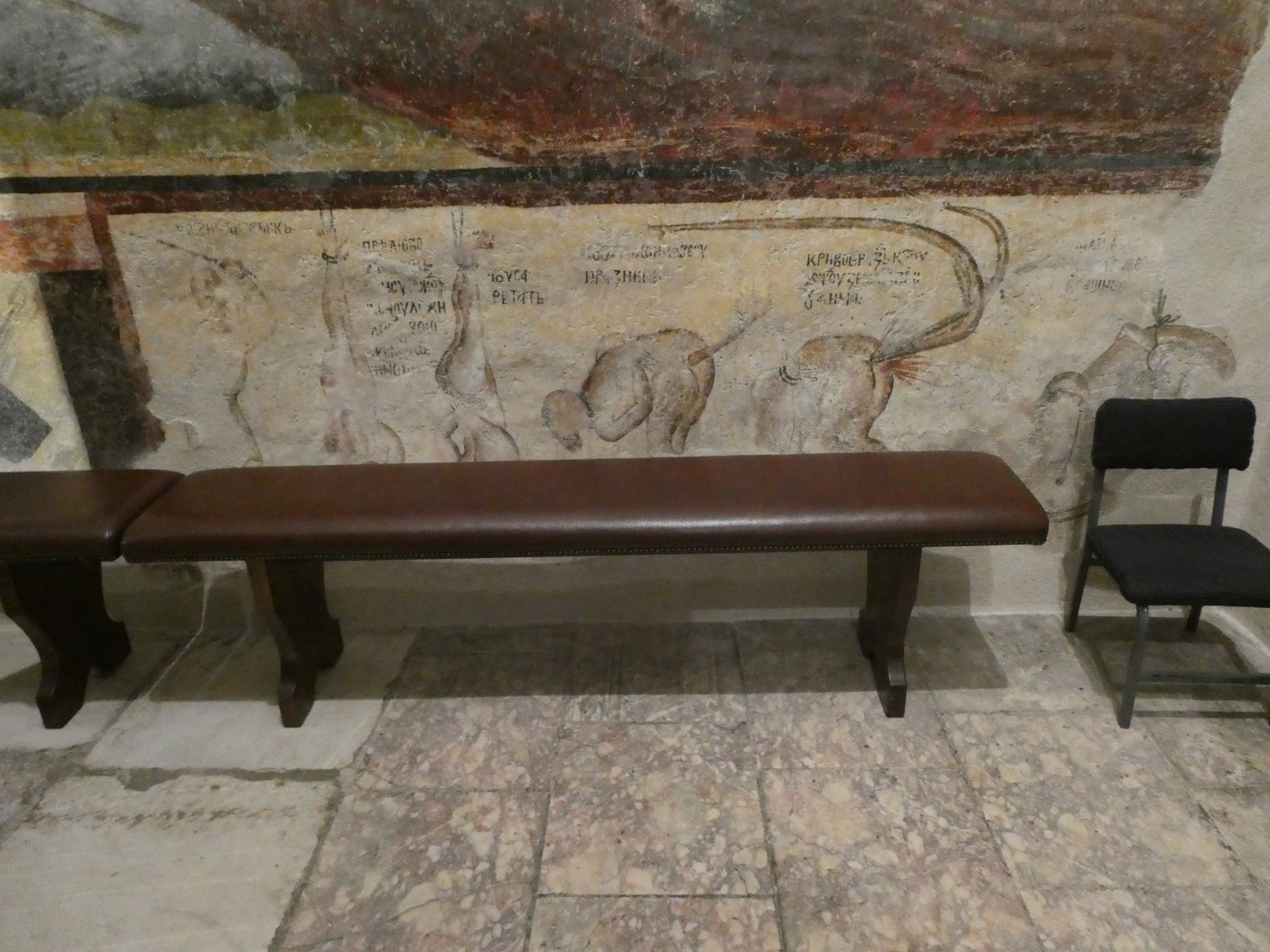 But this was just a curtain raiser for the main event.  Our real priority for the day was to visit the Bear Sanctuary, and that deserves a post all of its own.