Leaving Dubrovnik on an early morning ferry, the light over the small islands was lovely. 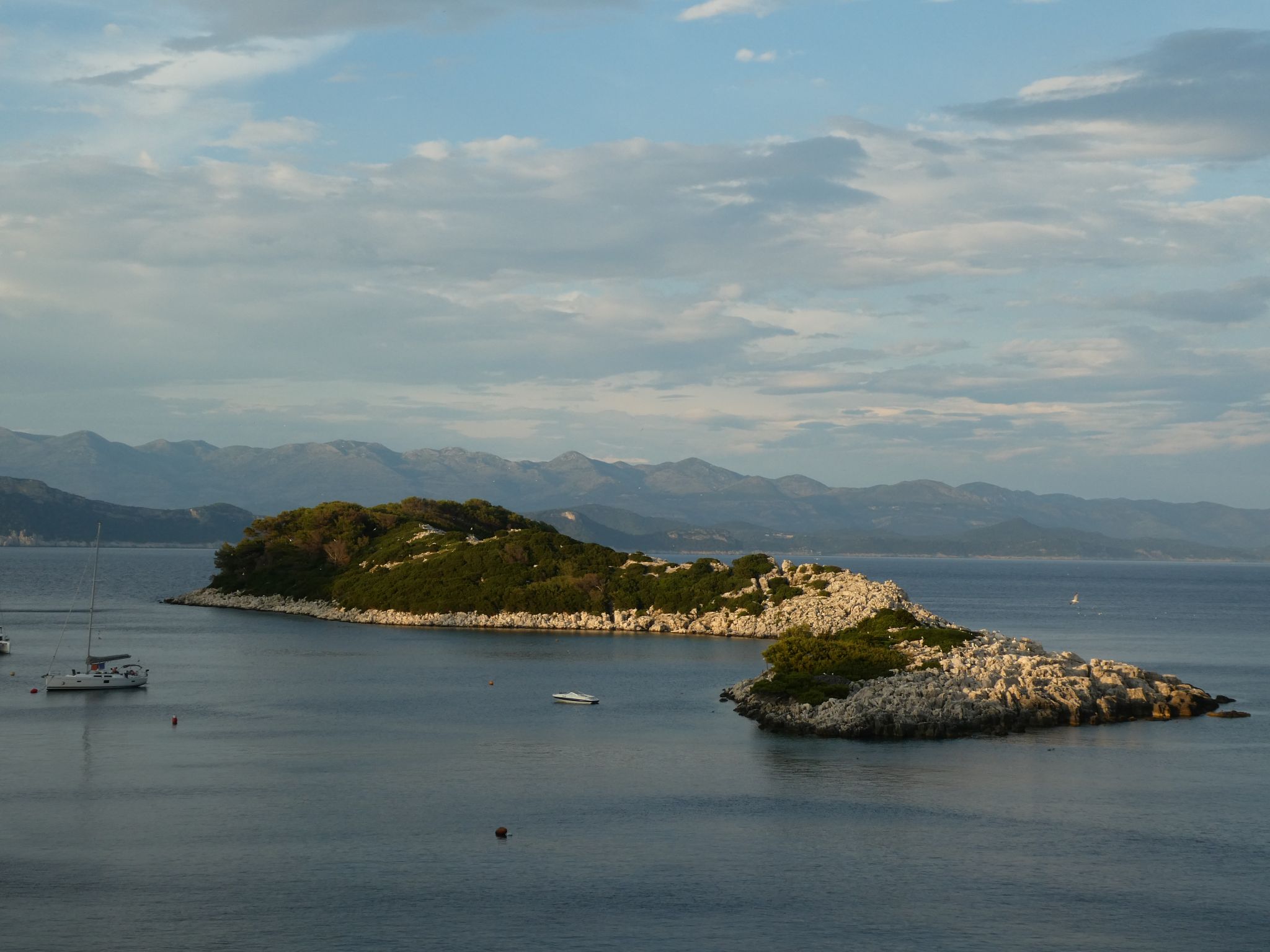 We were headed for Saplunara, a village on the island of Mjlet with a resident population of only 70 people.

There are no boats to Saplunara, but a couple of ferries dock at the town of Sobra.  There are no taxis, and just one bus which runs the length of the island at the unhelpful hour of 5am one way, returning the opposite way at 5pm.  We hopped off the ferry at Sobra and spotted a man who looked like he might be hoping to offer something.  He was actually there to spruik for a guesthouse in Sobra, but was happy enough to accept some cash from us to drive us to Saplunara instead.

Saplunara is at the very eastern end of Mjlet and, unlike most of the Adriatic, its beach is sand not pebbles.  We stayed in an old complex of seven units stepping down a slight slope above the bay, directly on the water.  It was truly idyllic. 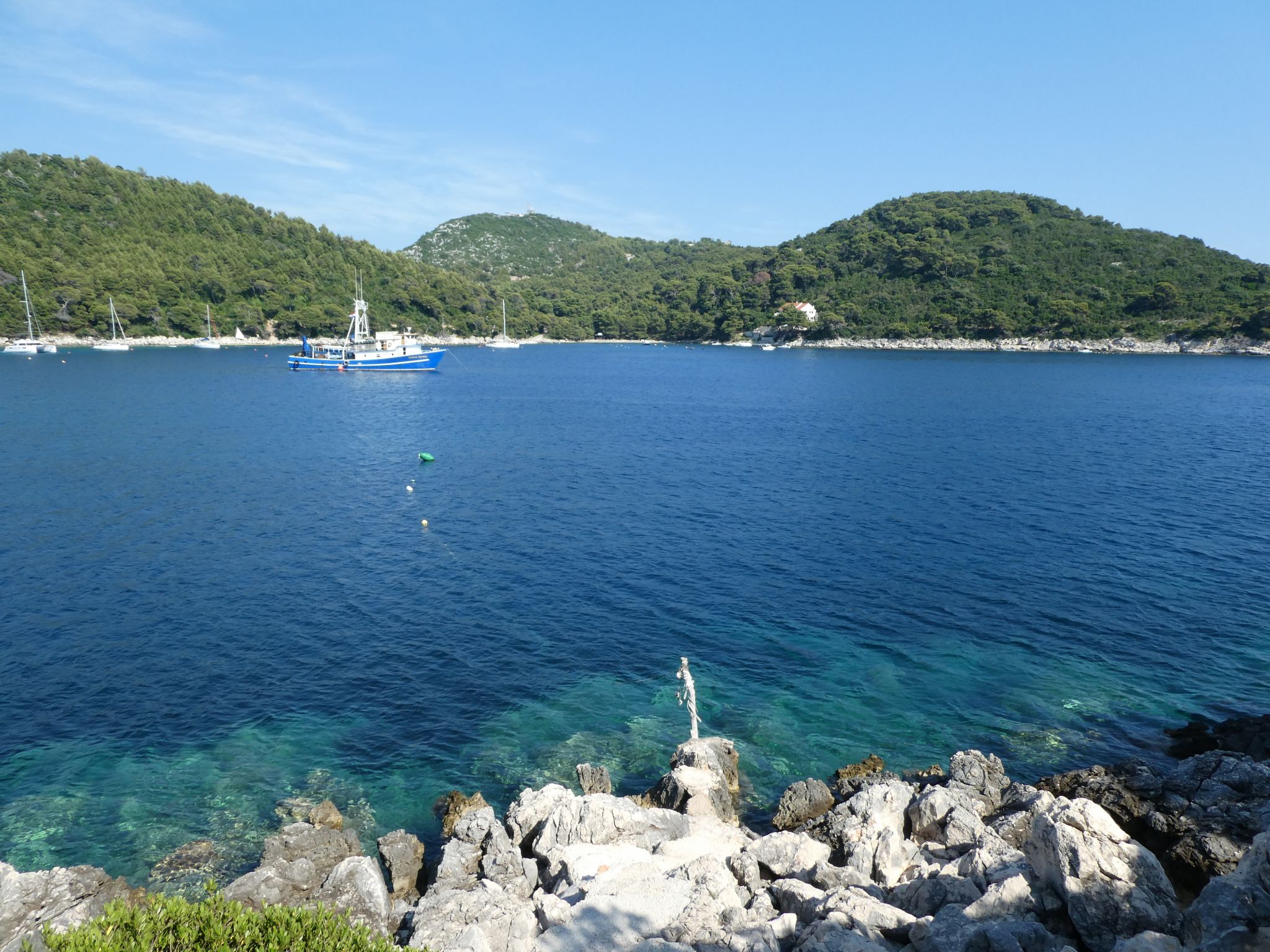 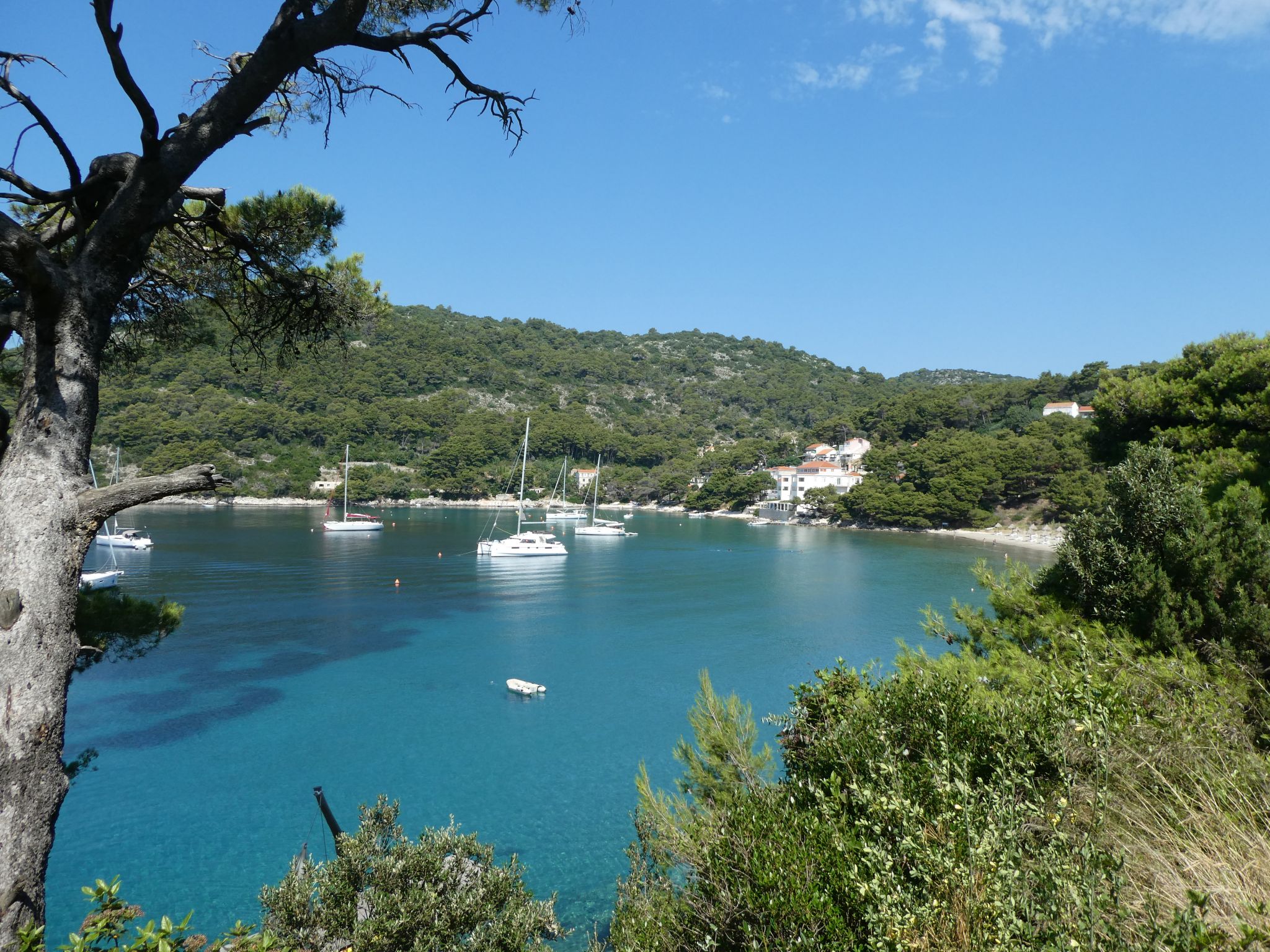 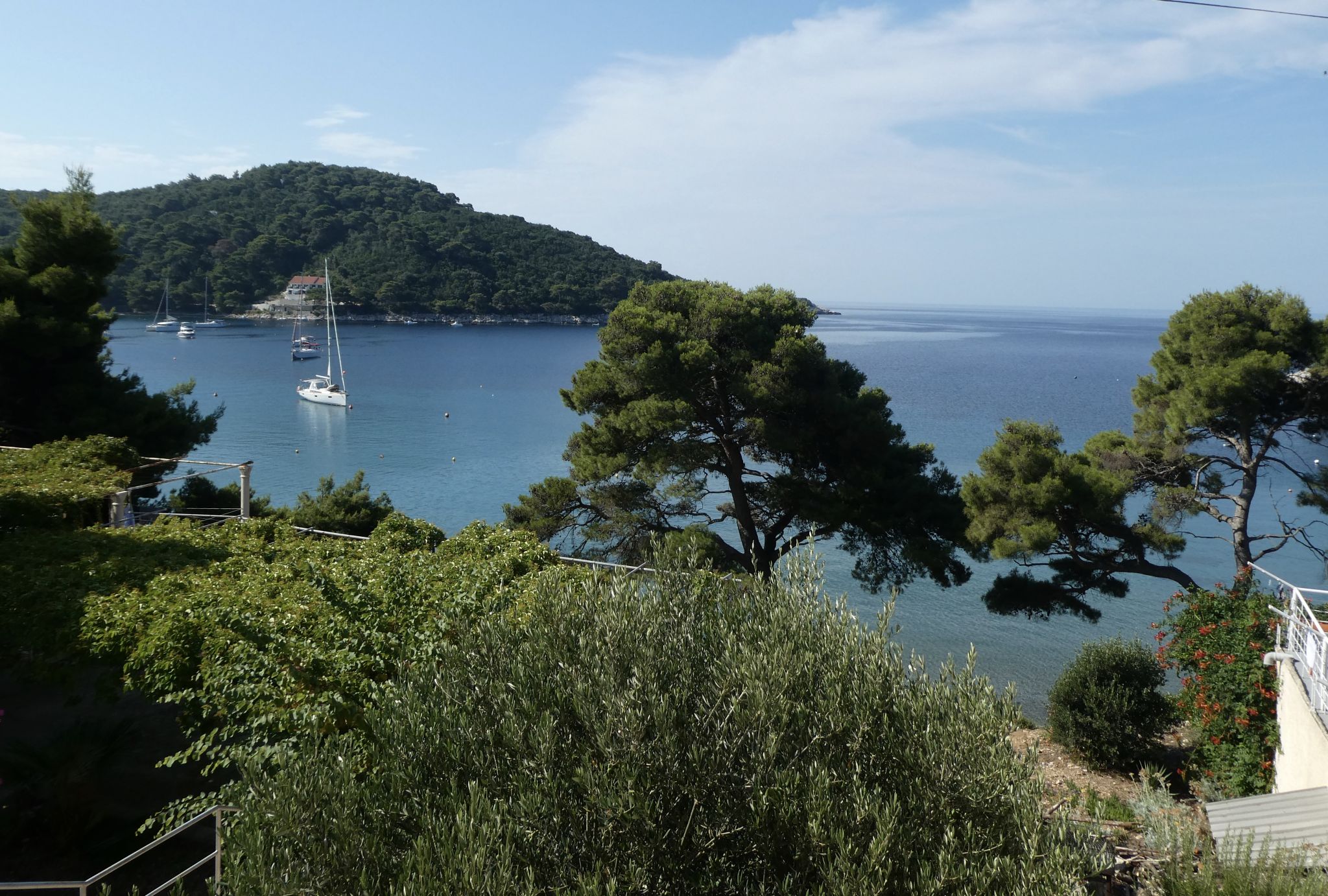 Four perfect days and nights staring catatonically at the sea, sipping wine, swimming each morning and afternoon, watching the occasional fishing boat steam in with a catch.  On arrival, the delightful lady who owned the place plied us with her home made rakija, then sold us some.  She also gave us some homemade olive oil, and the grocery store about 50 metres away baked bread fresh every day.

No internet, although a beach bar further around the bay had wifi, so we strolled round to there each morning to check emails and get a coffee fix.  And there are two restaurants within walking distance, mainly for visiting yachts.  Both have great views. 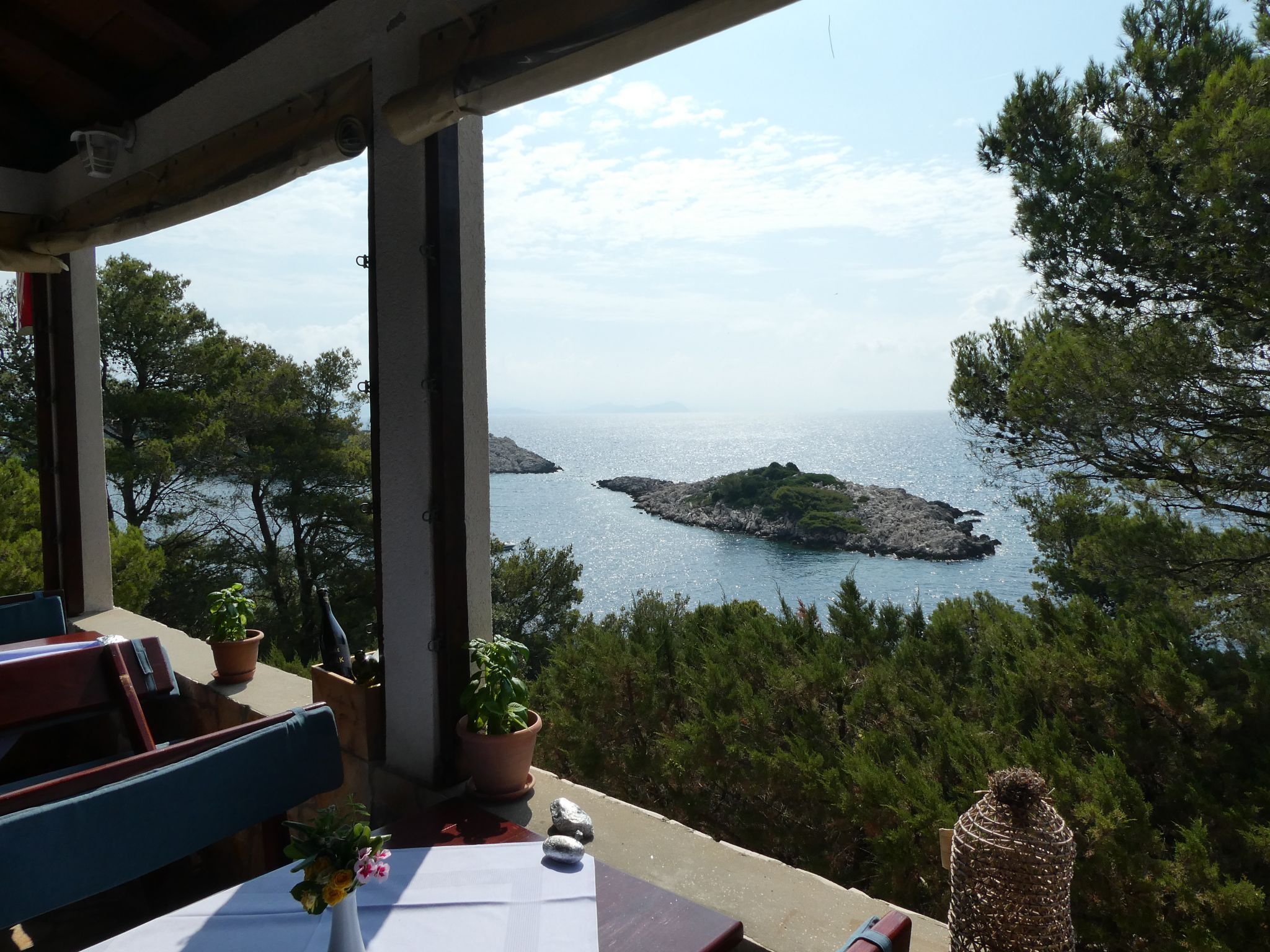 There were walking trails to ruined monasteries and the like.  This may have involved walking up hills.  It was hot.  It looked like hard work.  We didn’t do any of them.

We did, however, have to get back to the ferry, so on the last day we hired a car from the owner of one of the restaurants on an agreement we could leave it at the ferry terminal at the end of the day.

We drove to the other end of Mjlet where the town of Pomona sits on the boundary of the Mjlet National Park.  The Park covers almost all of the western part of the island.  Visitors come to see twin lakes, Malo Jezero and Veliko Jezero.

A community of monks lived in this area from the mid 1100s and eventually built a major monastery on the island.  At that time, the lakes were freshwater and joined by a narrow channel.  However the monks widened and deepened the channel and also dug another one linking the southern lake to the sea.  This caused the entire lake system to become tidal and therefore salty.

We read differing accounts of why they did this.  One said the works were to make transport easier.  Another said the monks intended the lakes to become saline to eliminate mosquitos which were the cause of high rates of malaria.

Whatever the reason, the monks’ objective seems to have been achieved, but the changes also caused irreversible ecological change including destruction of the freshwater fish population and much of the aquatic plant life.  Monks 1: Environment 0.

The monks also introduced mongooses to control native venomous snakes.  The mongooses succeeded in completely eliminating the snake population but then moved on to decimating the bird population.  To this day there are virtually no birds on Mjlet but the mongooses remain.  Monks 2: Environment 0.

Despite the biodiversity destruction, the area is still very pretty.  Swimming in the lakes is popular and the National Park has various walking paths. 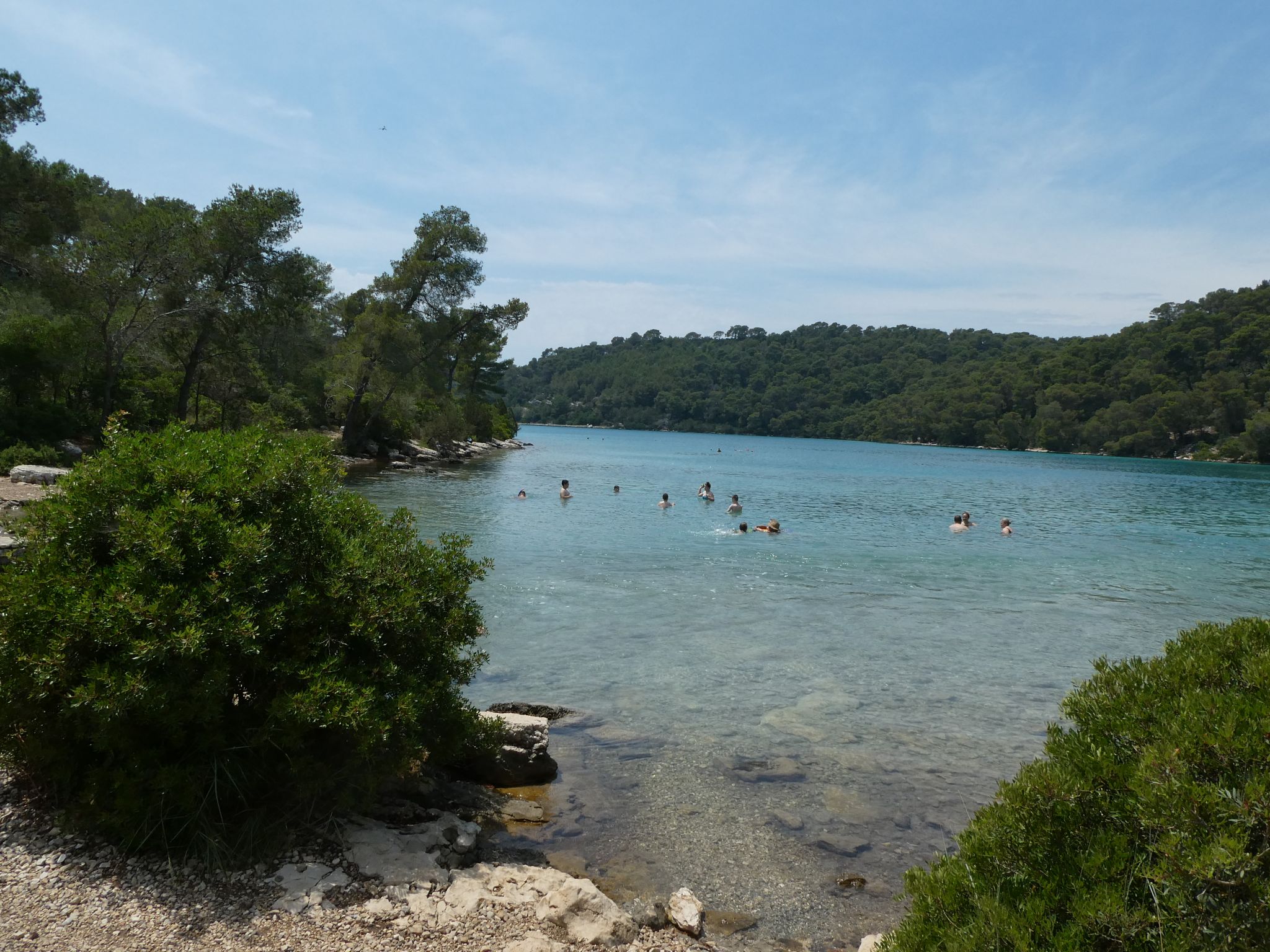 The monastery closed in 1809 following the Napoleonic conquest and was a government building and then a hotel which closed in 1991 due to the war.  St Maria Island has been returned to the Catholic Church, which is now restoring it. 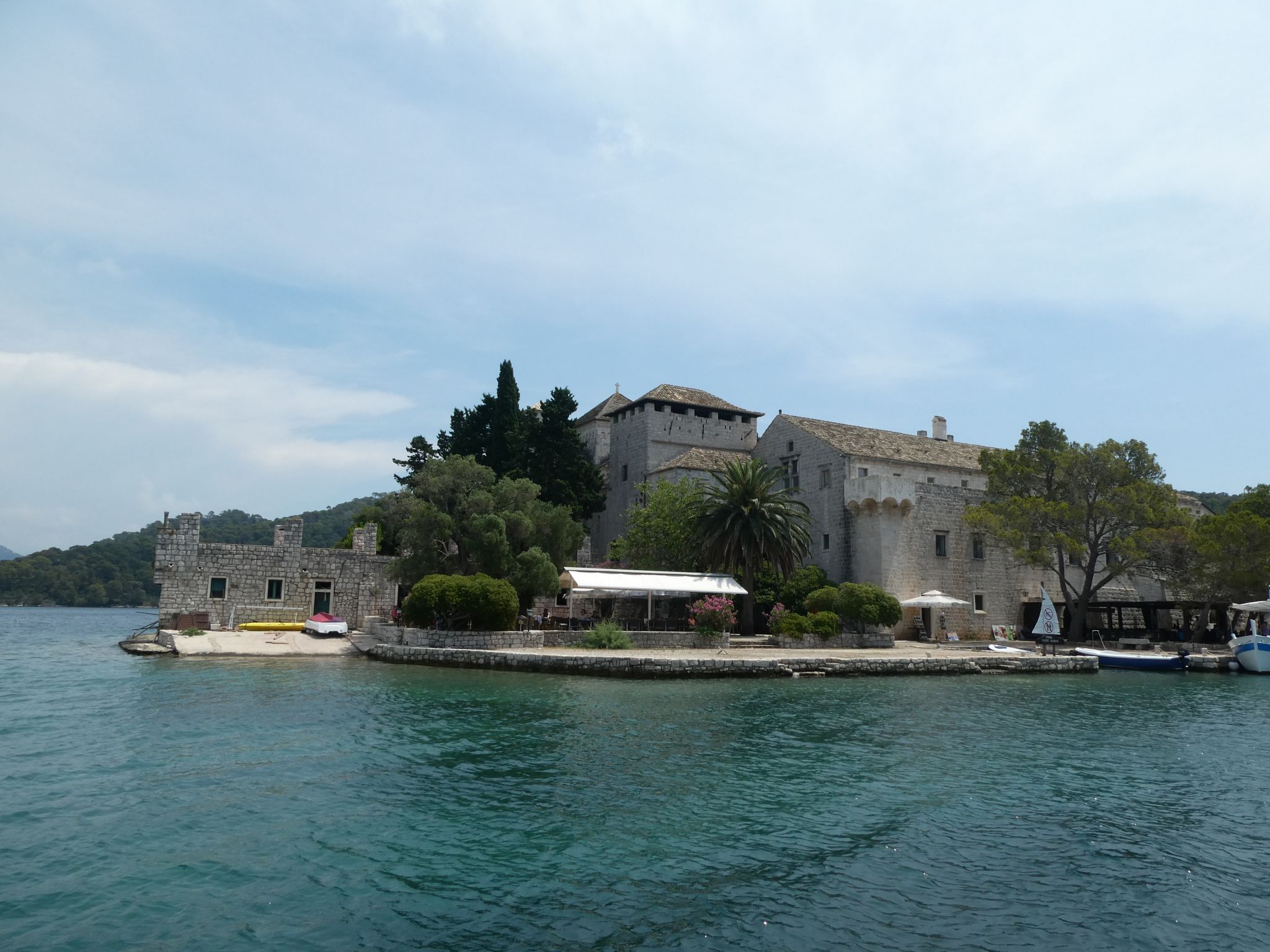 We walked the park paths and caught the boat to Sveti Marija, then drove back to Sobra for the ferry to Korcula, a very different Croatian island.