It’s tempting to call Korcula ‘Dubrovnik lite’.   It is smaller than Dubrovnik, with a population of only about 2,700 people.  But like Dubrovnik it is an old Venetian port, it has a marvellously intact old town of marble buildings and cobblestone streets from a similar era.

Compared to Dubrovnik, it is inexplicably quiet.  Very few tourists.  Guess they didn’t film any Game of Thrones scenes here.  Lucky us! 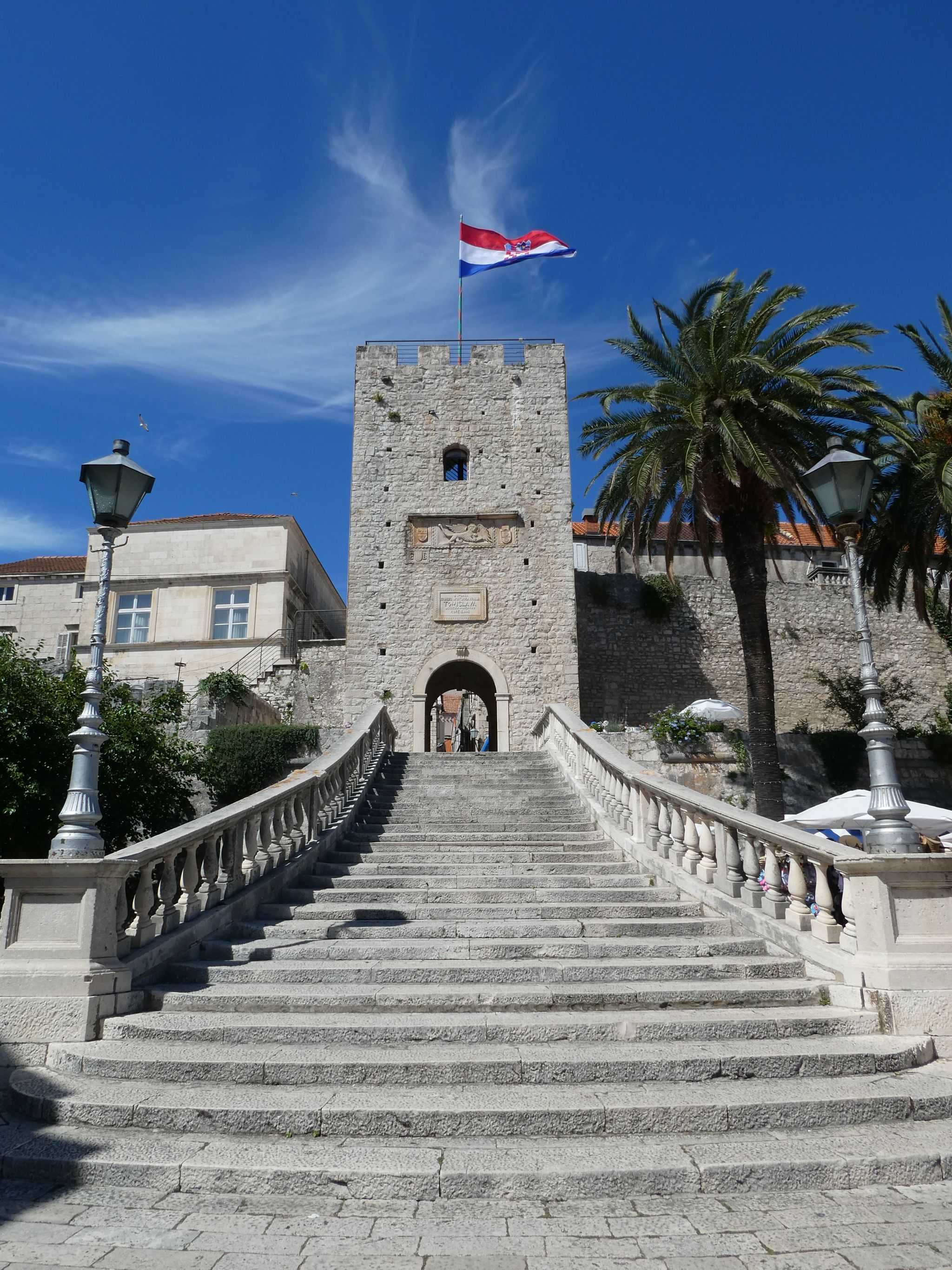 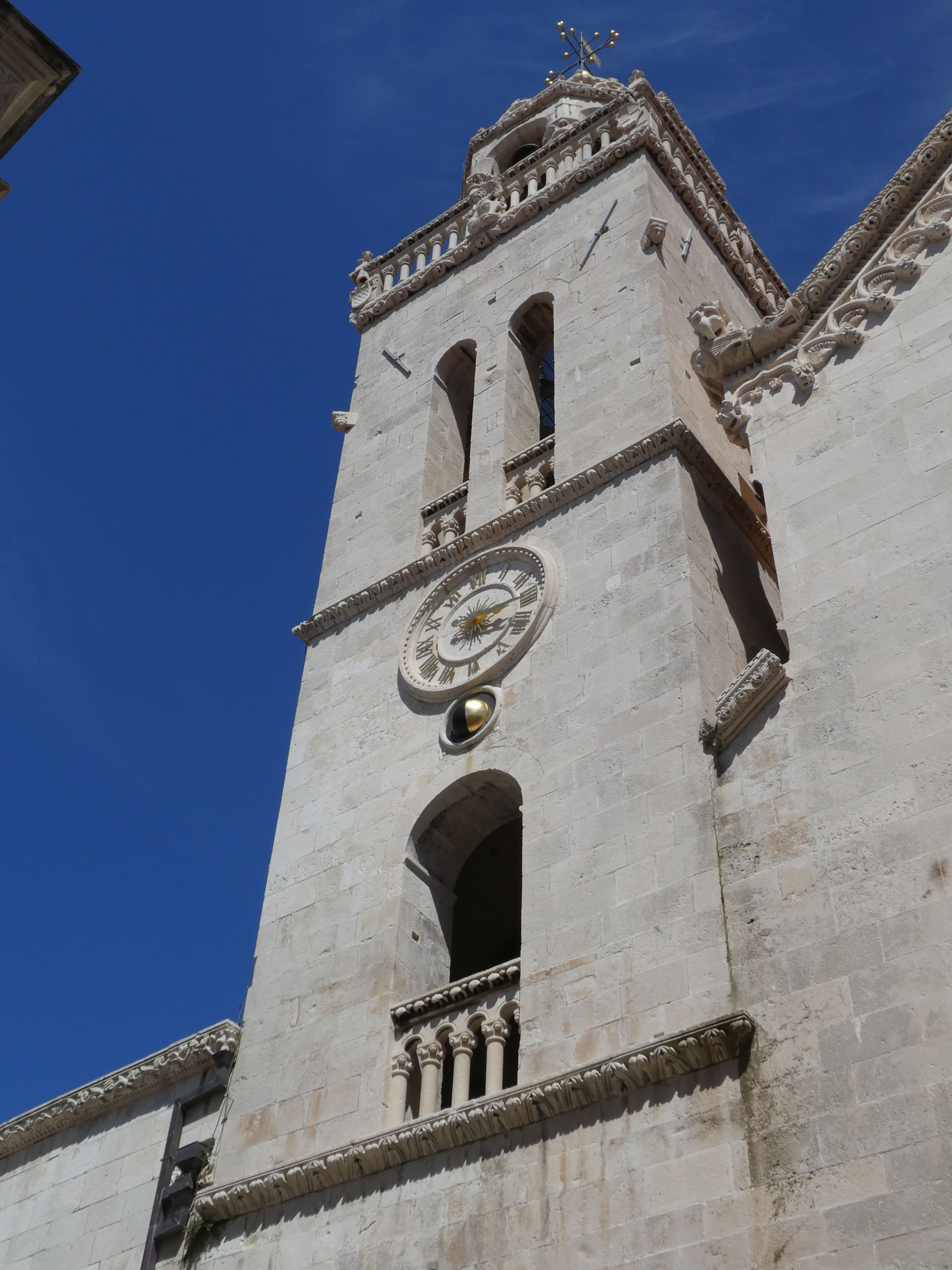 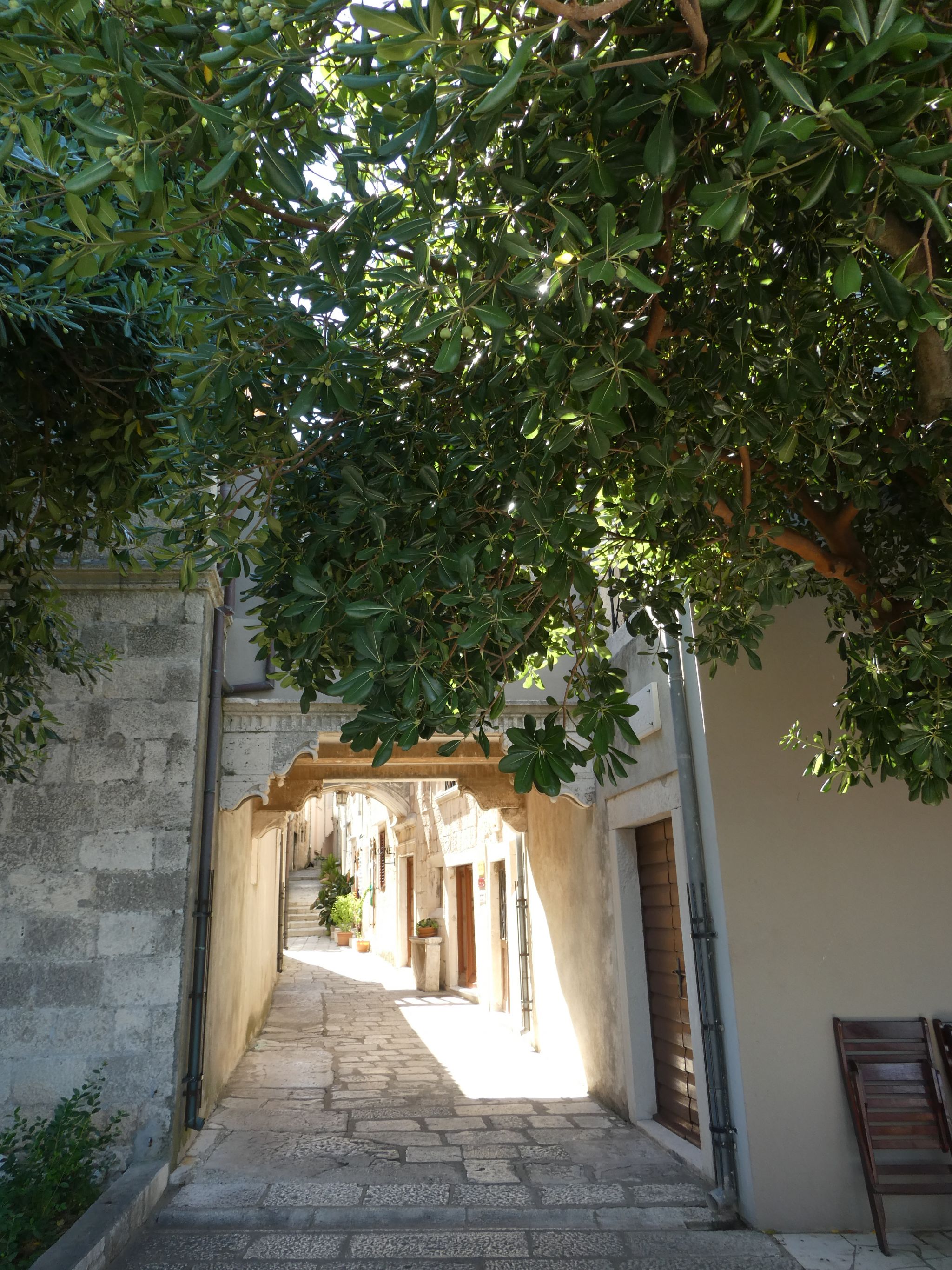 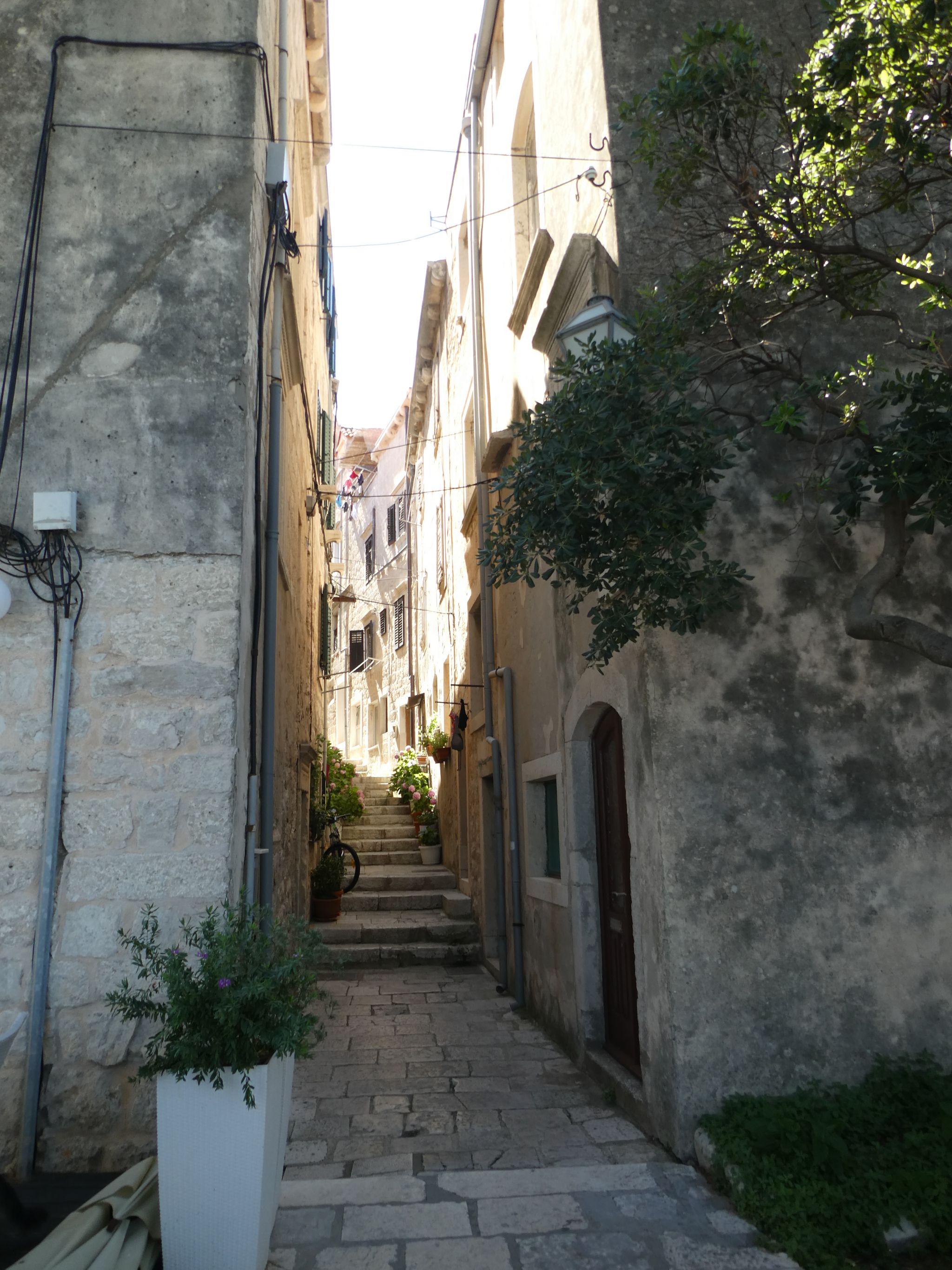 In what was an ingenious piece of design for its time, the architect responsible for planning the town devised a street pattern to address the extreme winds to which Korcula is exposed.  The layout of the old town looks  a bit like a splayed fish skeleton.  It comprises a central main avenue from which streets running west were built straight to catch the cooling Maestral wind that blows in summer, and streets running east were curved to block the Bura, a cold northeasterly wind that would otherwise rip through the town in winter.

You really notice this when you go outside the town walls.  Inside the town it was cool and not at all windy.  Step outside the walls and a fierce wind blew consistently.  Lovely harbour, though. 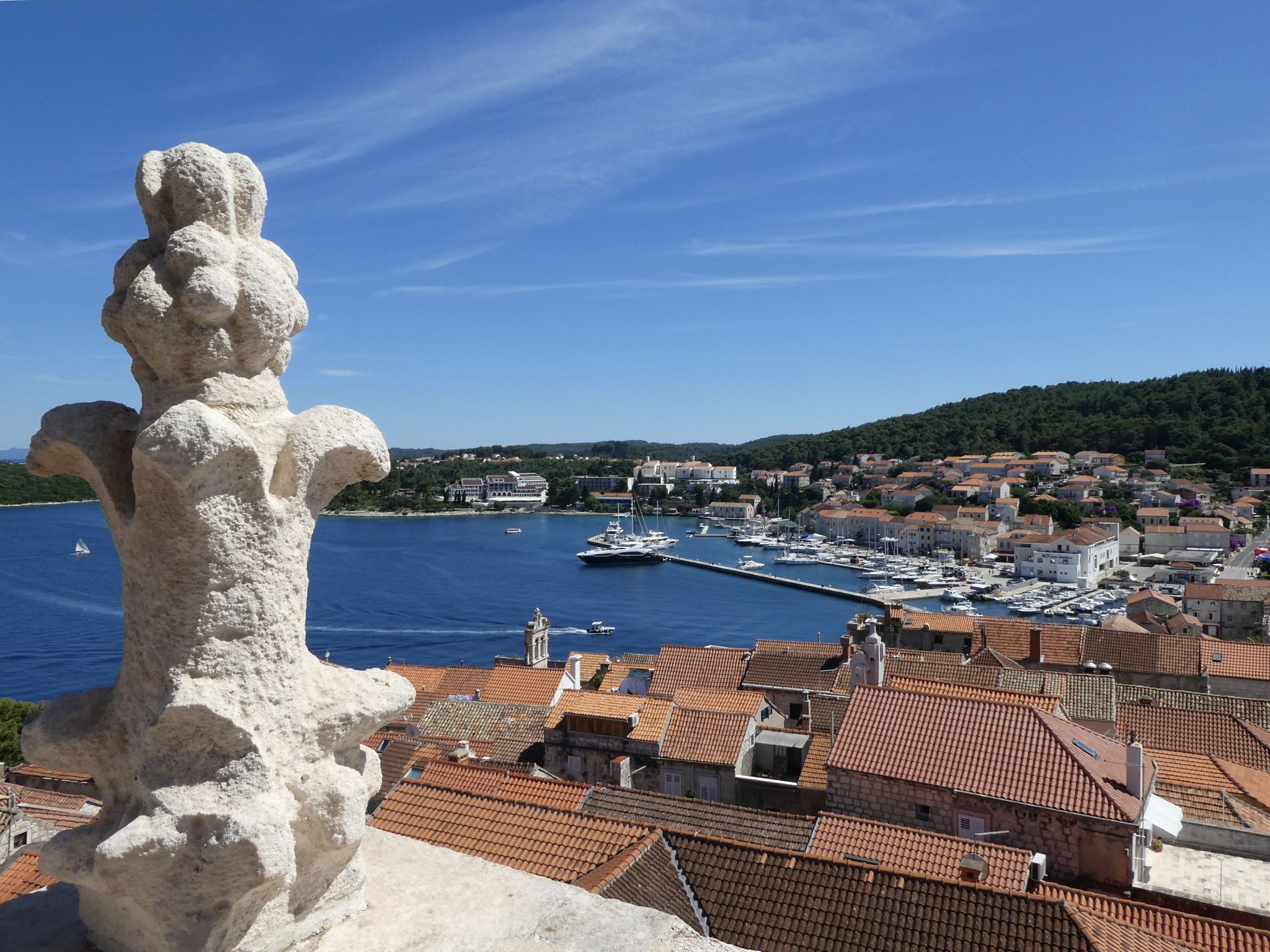 There is the usual slew of old stone churches.  The naked squatting statues of Adam and Eve on the front of St Mark’s Cathedral were a bit novel. 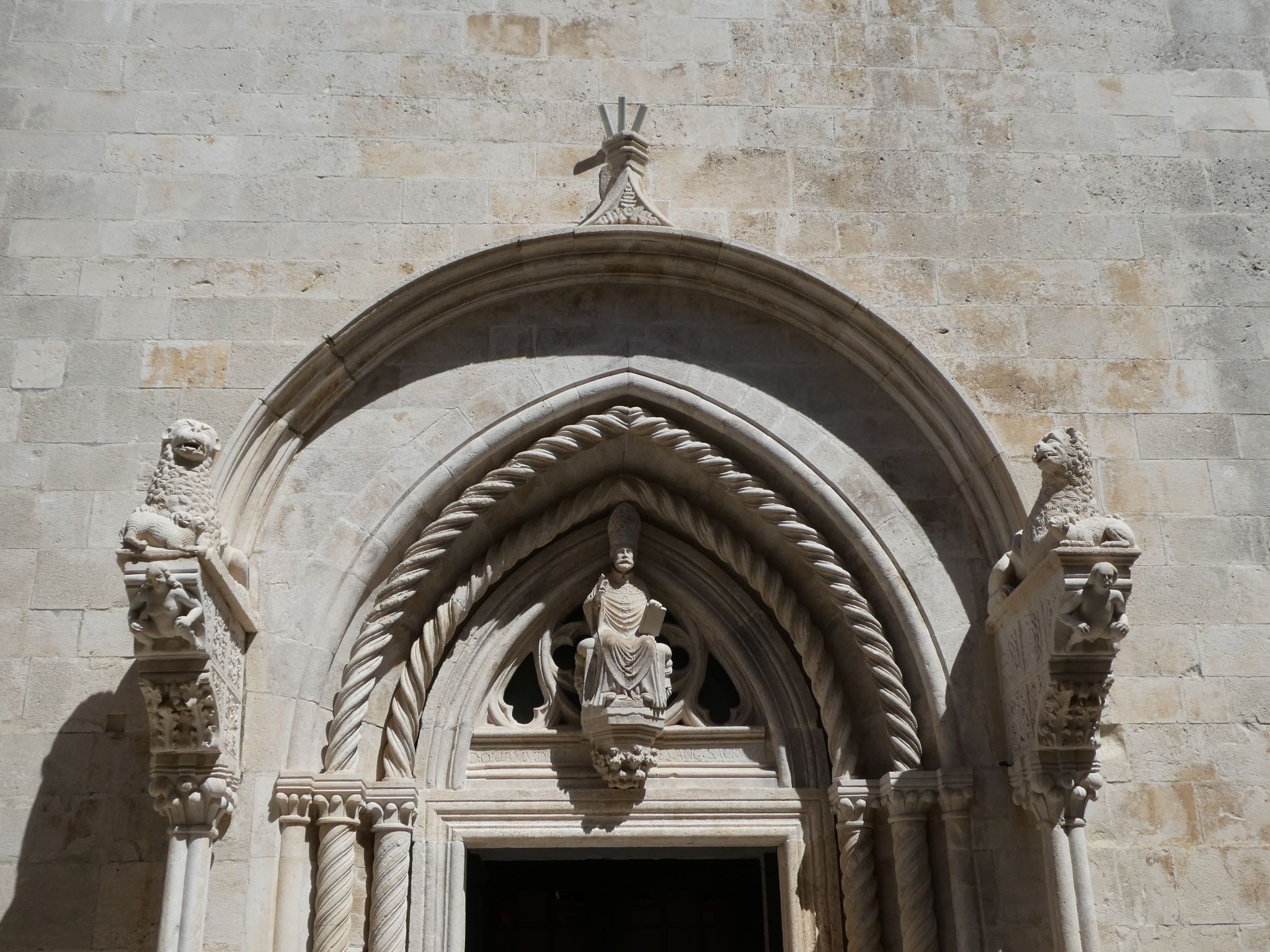 Korcula claims to be the birthplace of Marco Polo.  “But wasn’t he born in Venice?”, I hear you ask.  Well, that depends who you believe.

At the time of Marco Polo’s birth, Korcula was part of the Venetian empire and it was customary for wealthy residents to use their name in both languages.  Records confirm there was a wealthy merchant family by the name of Pilic (which means chicken in Croatian) and the Venetian equivalent would be Polo (the Italian for chicken).  It is asserted by some that one Maffeo Pilic, a member of that family, took the Italianised name Marco Polo and is the man himself.

Despite the absence of any definitive proof, Korcula has two Marco Polo museums, one of which claims to be the actual house in which he was born.

In 2011, the former president of Croatia almost caused an international incident when he gave a speech in China for the opening of a Marco Polo exhibition referring to Polo as ‘the traveller from Korcula’ who ‘joined two worlds’.  Some newspapers reported him as saying Polo was ‘born in Croatia’.

Affronted that a Croatian and not an Italian had been invited to open the exhibition, the Italians were further incensed at the assertion Polo was from Croatia.  One newspaper described the claim as a ‘theft of heritage’ and ‘the usual Croatian practice of stealing the Italian heritage’.

Whether he was born in Venice or Korcula, both were part of the Venetian empire at the time.  Korcula was not part of Croatia, which was then part of the Austro-Hungarian empire.  So it’s a bit of a stretch to say he was ‘born in Croatia’.  But by the same logic, you could say he wasn’t Italian either, since Italy didn’t exist as a country until several centuries later.  Perhaps best to just say he was Venetian.

Maybe he at least passed through Korcula.  This restaurant claims he ate there! 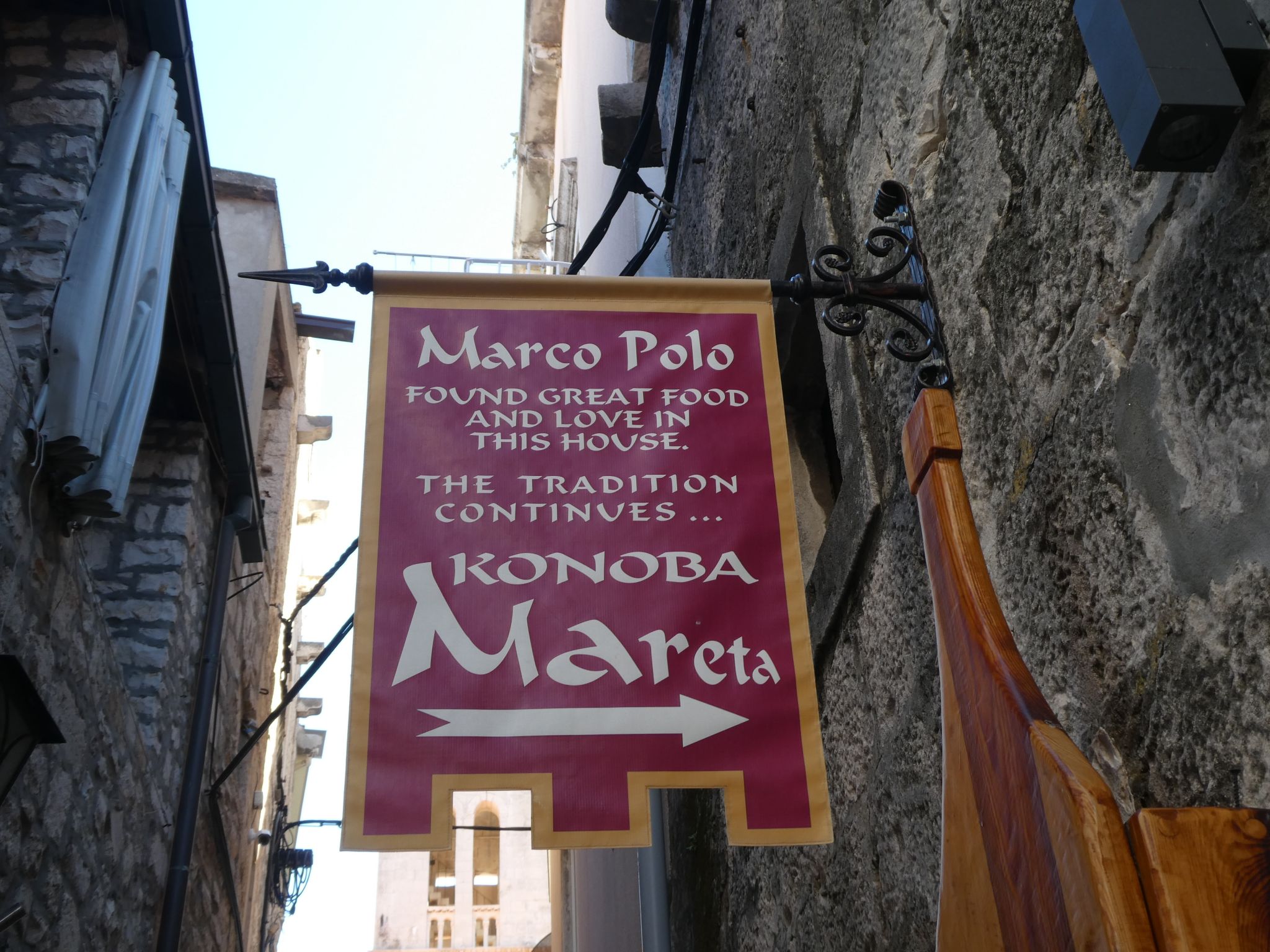 From Korcula it is possible to island hop up through similar stone towns on picturesque harbours up the Adriatic coast but we decided instead to head inland to Bosnia.  So from Korcula we caught a milk-run ferry via Hvar and Brac to Split and then a bus to Sarajevo.