We visited Srebrenica as a day trip from Sarajevo.  It is not the town which is of significance, but the events which occurred here in July 1995.  It was accepted wisdom after WW2 that genocide could ‘never happen again’ in a first world country.  Just 50 years later, it happened here. 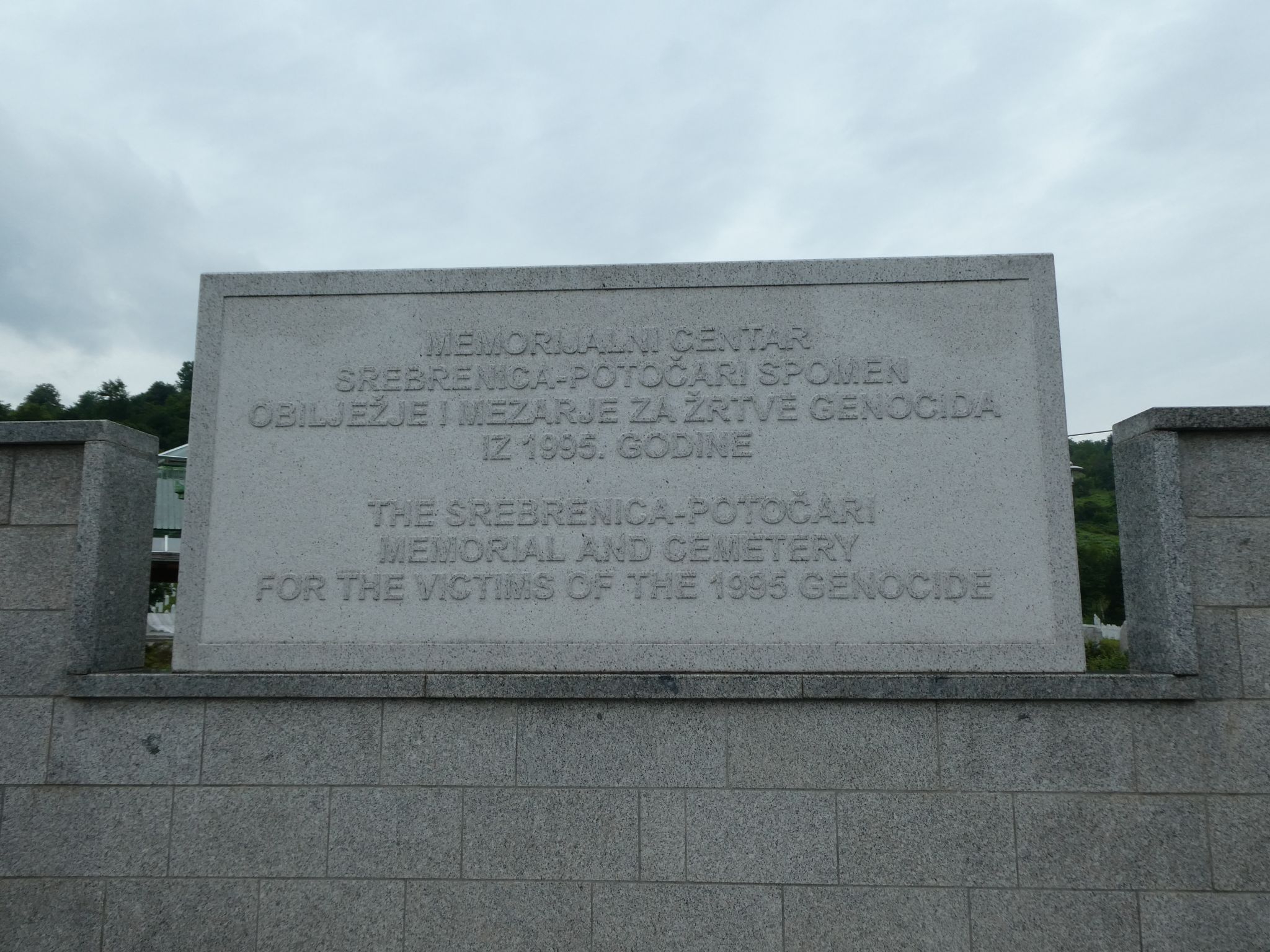 The events, motivations and excuses for what occurred are complex, controversial and in some cases, still unexplained.  So we will try to stick to the facts.

From early 1992, the Bosnian Serb army (the army of the self-declared separatist Republika Sprska, financed and supported by Serbia) and paramilitaries carried out attacks on Srebrenica and surrounding towns.   More than 200 villages were subjected to ‘ethnic cleansing’, ie the entire Muslim population of the village was killed or expelled.  The ultimate goal was to rid the area of Muslims, leaving an exclusively Serb population, and annex these lands to Serbia.

In May 1993 the United Nations issued a Declaration establishing a zone centred around Srebrenica as a Safe Area.  The Declaration included specific wording that the area was to be protected using ‘all necessary means, including the use of force’.

A UN peacekeeping force was sent in, which set up monitoring posts at locations throughout the Safe Area and a large base at Potocari, a village near Srebrenica.

Over the next two years, Srebrenica’s population increased significantly as thousands of Bosnian Muslim refugees arrived in the Safe Area from other parts of the country which were under assault.

On 6 July 1995, the Bosnian Serb Army, supported logistically and financially by Serbia, began an offensive heading toward Srebrenica.

In clear violation of the Safe Area status, the attacking army overran the UN security posts, which the UN peacekeepers abandoned without firing a shot.

As it became apparent that Srebrenica would be attacked, thousands of residents and refugees sheltering in the Safe Area came to the UN base at Potocari seeking protection.

Approximately 5,000 were allowed in.  Except for about a dozen, almost all were women and children. Around 20,000 others remained stranded outside the perimeter fence.

Bosnia and Herzegovina (BiH) resistance fighters considered an attack to attempt to stop the Serbian Army taking Srebrenica but would not have been successful without UN support.  The UN base commander was advised by higher UN authorities late on 10 July 1995 that aerial bombing of the Serb Army positions would take place next morning, but when morning came, he was informed that no such action would be taken.

The Bosnian Serb Army took control of Srebrenica that day.

The peacekeeping force did not oppose the attack.  The Dutch force of just 400 was vastly outnumbered, only lightly armed, and external UN support had been denied despite repeated requests from the base commander over the preceding days as the threat of attack increased.

After entering the conquered Srebrenica, the Bosnian Serb Army’s commanding officer, General Ratko Mladic was filmed by a Serbian journalist saying ‘the time has come to take revenge on the Turks’ (a reference to Bosnian Muslims, whether or not they were of Bosnian or Ottoman descent).

General Mladic assured the massed crowds and the UN base representatives that the displaced citizens and refugees would not be harmed and that they could be transported to free BiH territory further west.

That night, approximately 10,000 men and boys, fearing the Army’s intentions, formed a column and began walking over the hills toward Tuzla, a town within free BiH 70 miles away, believing there would be safety in numbers.

More than two-thirds never made it.  It came to be known as the Tuzla Death March.

The Bosnian Serb Army shelled the road, killing many.  Others were forcibly rounded up.  Some groups were lured out of the forest with promises that they would not be harmed if they surrendered.  In some cases, soldiers in stolen UN uniforms coaxed groups out of the forest by posing as peacekeepers.

Whether captured, surrendered or duped into emerging from the forest, those not immediately killed were taken to remote sites, slaughtered and placed in mass graves.

As to the thousands who remained around the UN base, the buses which arrived to transport the people were seized by the Army, who stated they would organise the evacuation.

In plain sight outside the base, and without resistance by the UN, soldiers separated out men and boys over 12, allowing only women and children to board the buses.  This process was also filmed.

Despite advocates begging the UN that those within the UN compound be permitted to stay, these people were required to leave the base and join those being transported. Local UN staff of the base were also required to leave.

Mostly, the women and children were delivered to the no man’s land between the opposing forces and were permitted to cross to the BiH free territory.  However the men and boys were taken by bus to isolated locations used as holding centres.  Over the following week, they were shot and buried in mass graves.  This included the men who had been required to leave the UN base.

Meanwhile, General Mladic settled his forces in at Srebrenica, now devoid of its former Muslim population and refugees.  The UN agreed to leave and the camp commander shook hands with Mladic, handed over the base and was farewelled by Mladic with flowers and gifts for his wife.

Many of the individual peacekeepers have since suffered depression, PTSD and other mental health issues as a result of knowing what happened to those left behind.   Yet it is clear they had no choice.  It was the UN at higher levels that, without a fight, acquiesced to the illegal occupation of the Safe Area and the abandonment of the local and refugee Muslims it was mandated to protect.

Continued attacks on designated Safe Areas and the siege of Sarajevo ultimately resulted in NATO intervention in the form of Operation Deliberate Force, which together with diplomatic intervention, ended the war.  Needless to say, both came too late for the people of Srebrenica.

There are some who object to the killings being termed ‘genocide’ but that is the official finding of the UN.

Some still seek to justify the killings as a ‘military intervention’ rather than ethnic cleansing.  But if any evidence is needed that those who committed these acts knew they were crimes, it is this: in September and October 1995 when it became apparent that the war would end and they would have to leave BiH, the Bosnian Serb Army took the extraordinary step of digging up many of the mass graves with bulldozers and tractors and transporting the decomposing bodies to remote secondary and even tertiary sites to hide the evidence of what occurred.  Why do that if you are comfortable the killings were ‘justified’?

In 1996 the International Criminal Tribunal for the Former Yugoslavia issued a warrant for Mladic’s arrest on war crimes charges.  He remained at large in Serbia until 2011.  But when Serbia applied to join the EU and his extradition was made a pre-condition to it being granted candidate status – surprise, surprise – he was located and captured in a raid on his cousin’s house.

After a five year trial, in 2017 he was convicted on 10 charges including one of genocide and five of crimes against humanity, relating to his responsibility for the siege of Sarajevo and the Srebrenica massacre.  He was sentenced to life imprisonment.

Also in 2017, the Hague Appeals Court upheld an earlier decision that the Netherlands was legally responsible for the death of the 300 men who were required to leave the base, but not of the men rounded up from outside the camp.

A cemetery was established at Potocari for victims whose remains have been identified.  Exhumation work is ongoing, and once per year a ceremony is held for the burial of all bodies identied in the course of the previous year.  The number currently stands at 8,372. 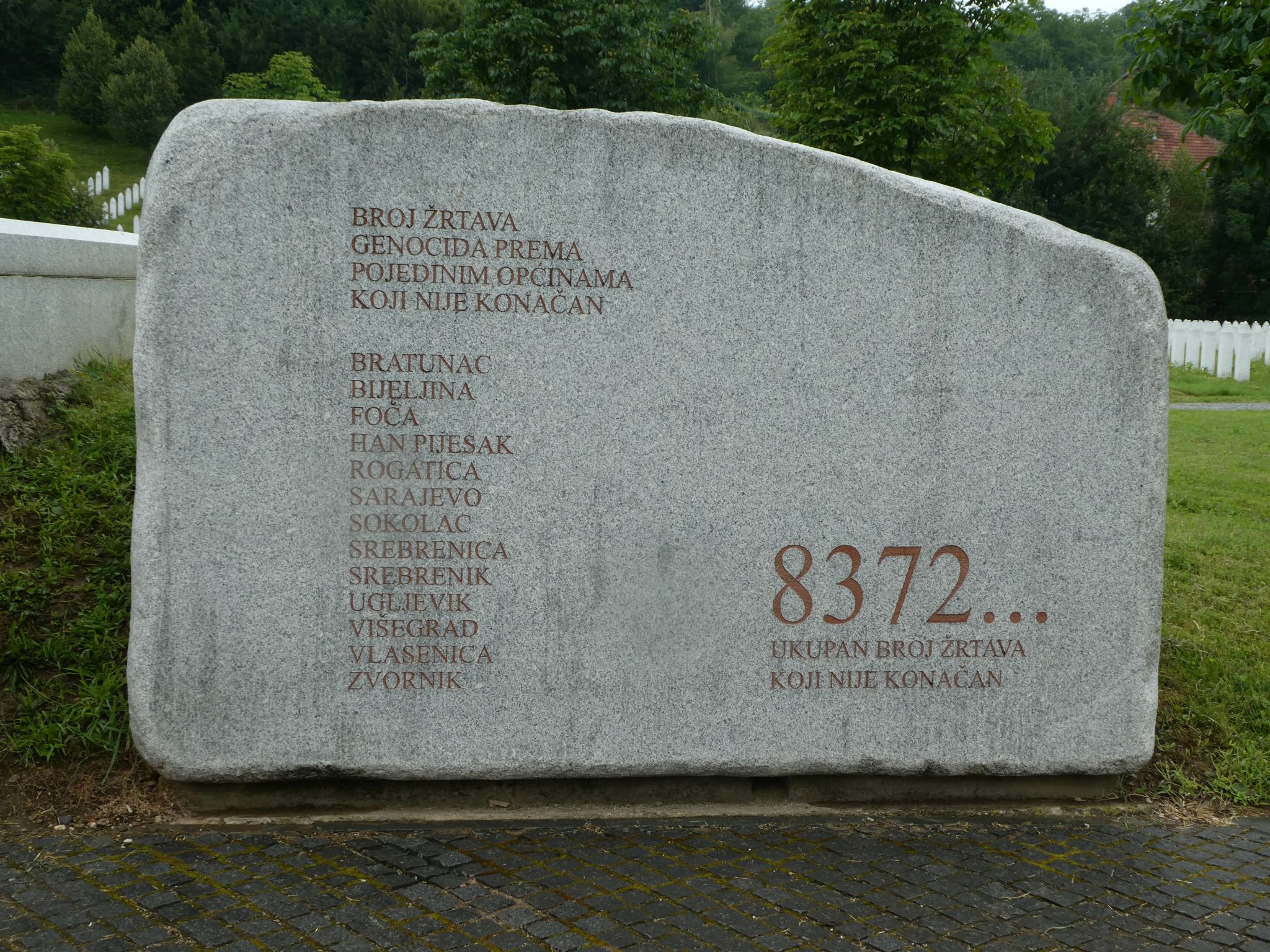 The sheer scale of the cemetery is confronting. 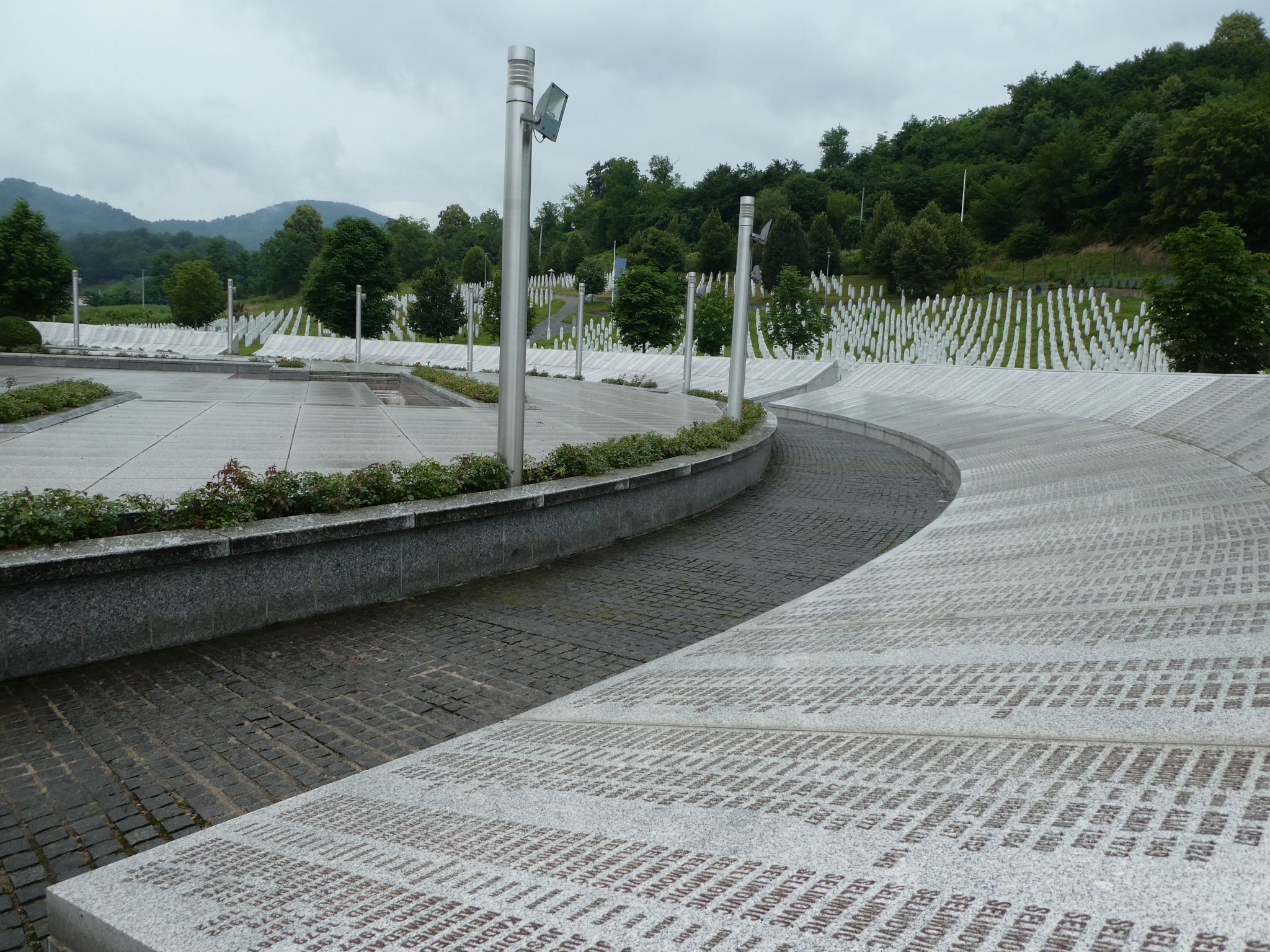 All but one of the victims buried here is Muslim.  Hren Rudolf, a Catholic living in Srebrenica, chose to stay and fight alongside his Muslim neighbours.  A true hero. 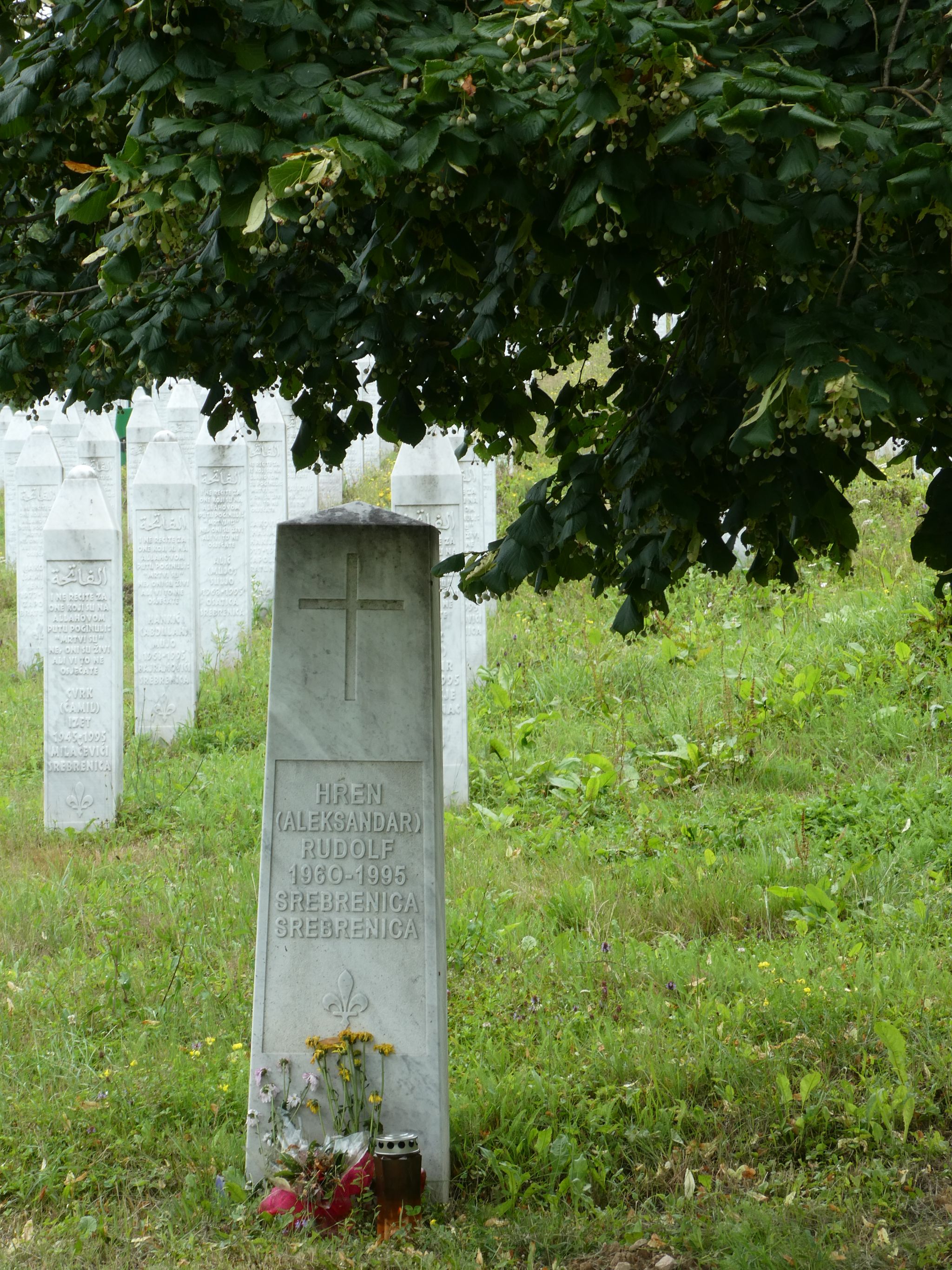 Across the road, the former UN base now houses a museum.  The recording of Mladic’s ‘revenge’ comment, footage taken by soldiers of others in their unit executing prisoners by gunshot to the back of the head, TV newsfilm of the UN base commander wishing General Mladic ‘all the best’ as the UN handed over the base.  All these can be viewed, together with a detailed exhibition on the work of the investigation and forensic pathology teams responsible for identifying and exhuming the mass graves. 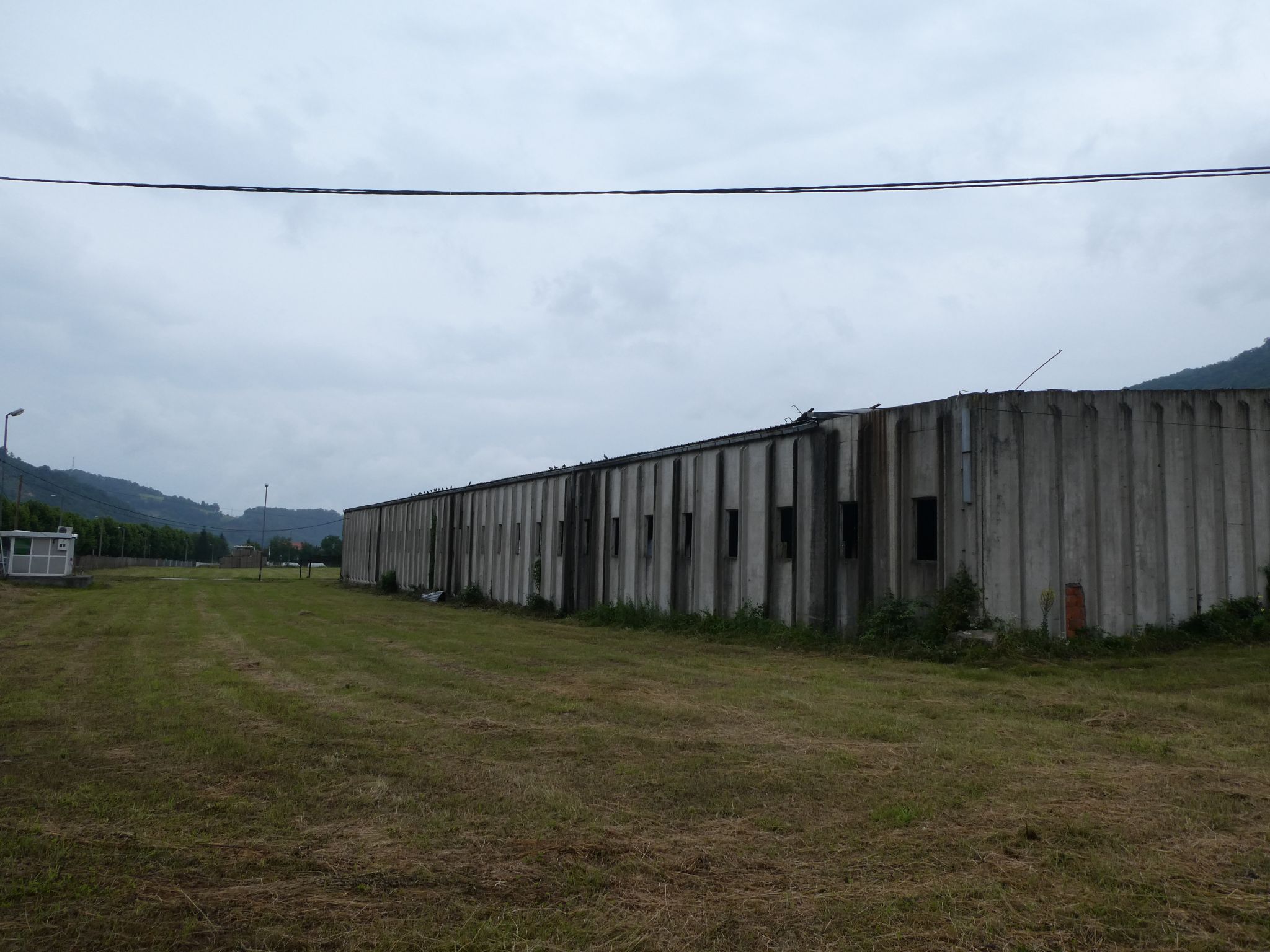 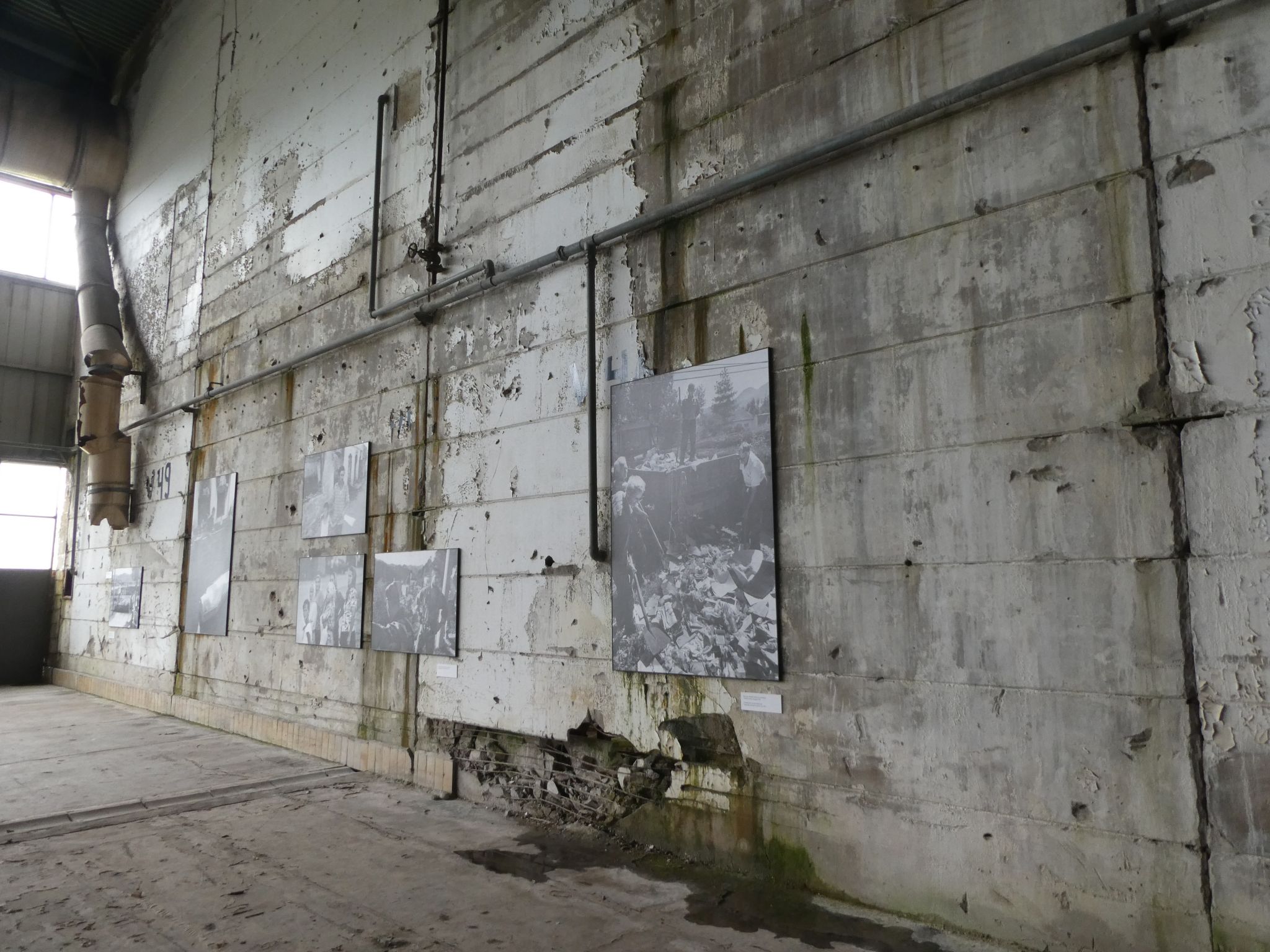 The cemetery and former base are not near public transport so you need a guide or private vehicle to get there.  We had a guide from an agency in Sarajevo who was born in Srebrenica.  Two years before the massacre, his mother took him and his brother to Tuzla due to the deteriorating security situation.  His father stayed and was one of those who survived the Tuzla Death March.  His parents returned to the Srebrenica area after the war, but not to their previous home.  They say they still would not feel safe there.

This is a challenging and confronting place to visit.  But for anyone visiting Sarajevo, it is absolutely worth taking an extra day to make the trip.