Beautiful Mostar has the unfortunate distinction of being the most heavily bombed of any Bosnian city during the war following the disintegration of Yugoslavia.

When Bosnian and Herzegovina (BiH) declared independence, Serbian Army forces besieged the city and aerial strikes caused much damage.   Initially they were oppposed by a joint force of local ethnic Croats and Bosniaks and were assisted by the Croatian Army.  But after the Serb Army withdrew and concentrated its actions in northern and western BiH, relations between Bosniaks and Croats deteriorated, and Croat forces conducted their own assault seeking to take control of Mostar.

The Croat siege of Mostar comprised unrelenting shelling in which the city suffered massive damage, culminating with the destruction of the iconic Stari Most Bridge in an artillary assault just months before the war ended by a ceasefire agreement in March 1994.

Like Sarajevo, the beautiful, ancient Ottoman heart of the city has been extensively restored. 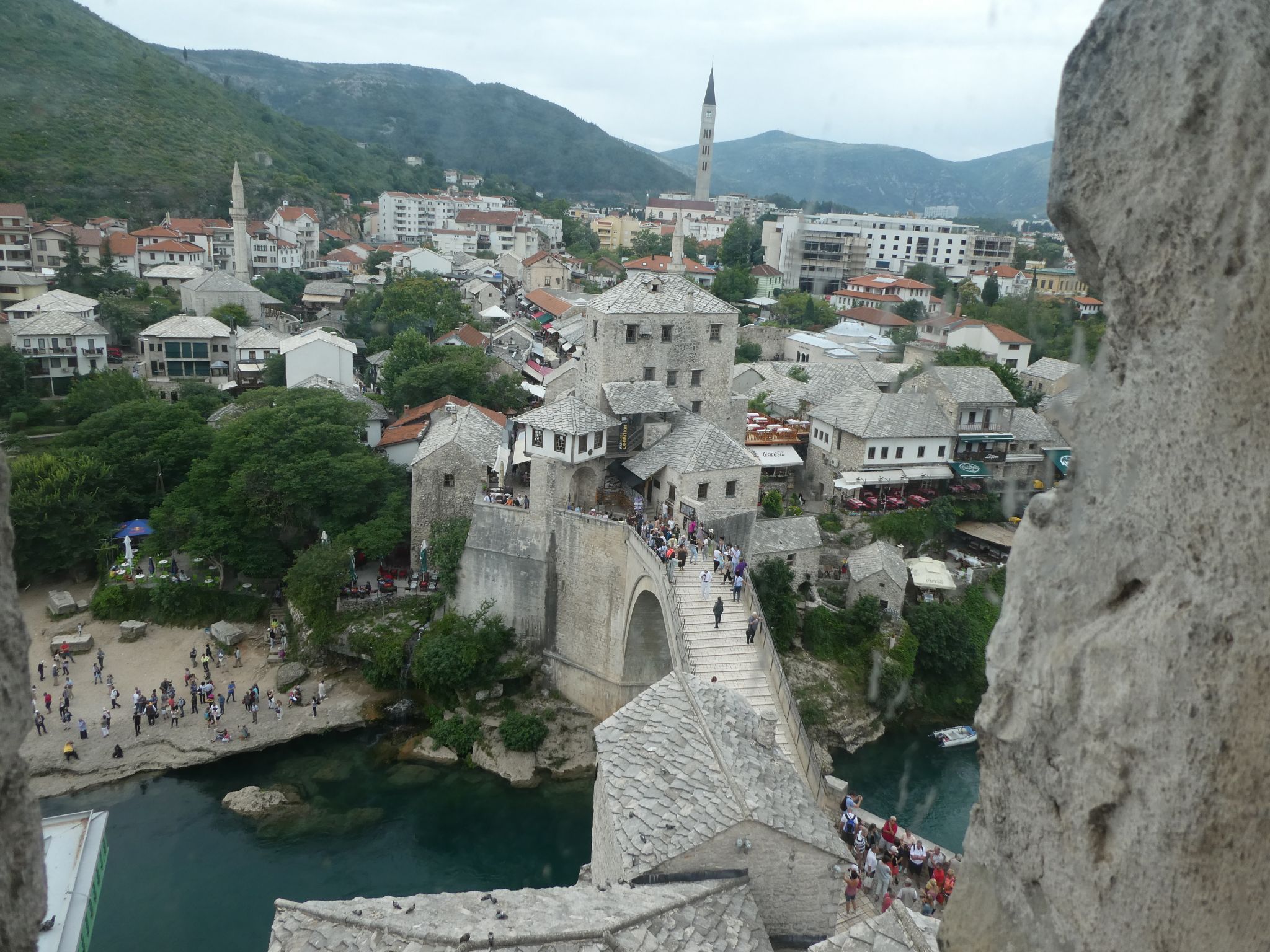 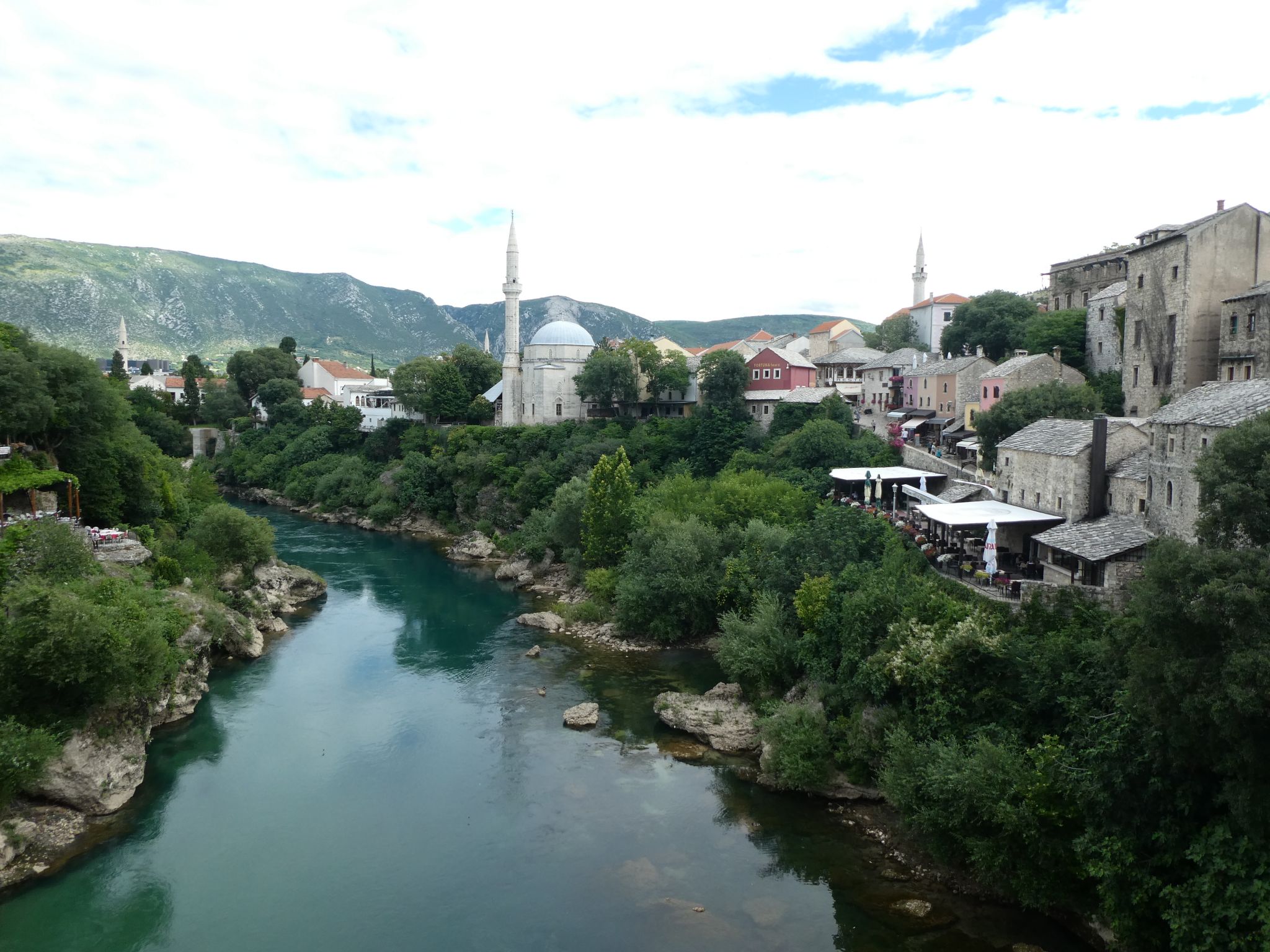 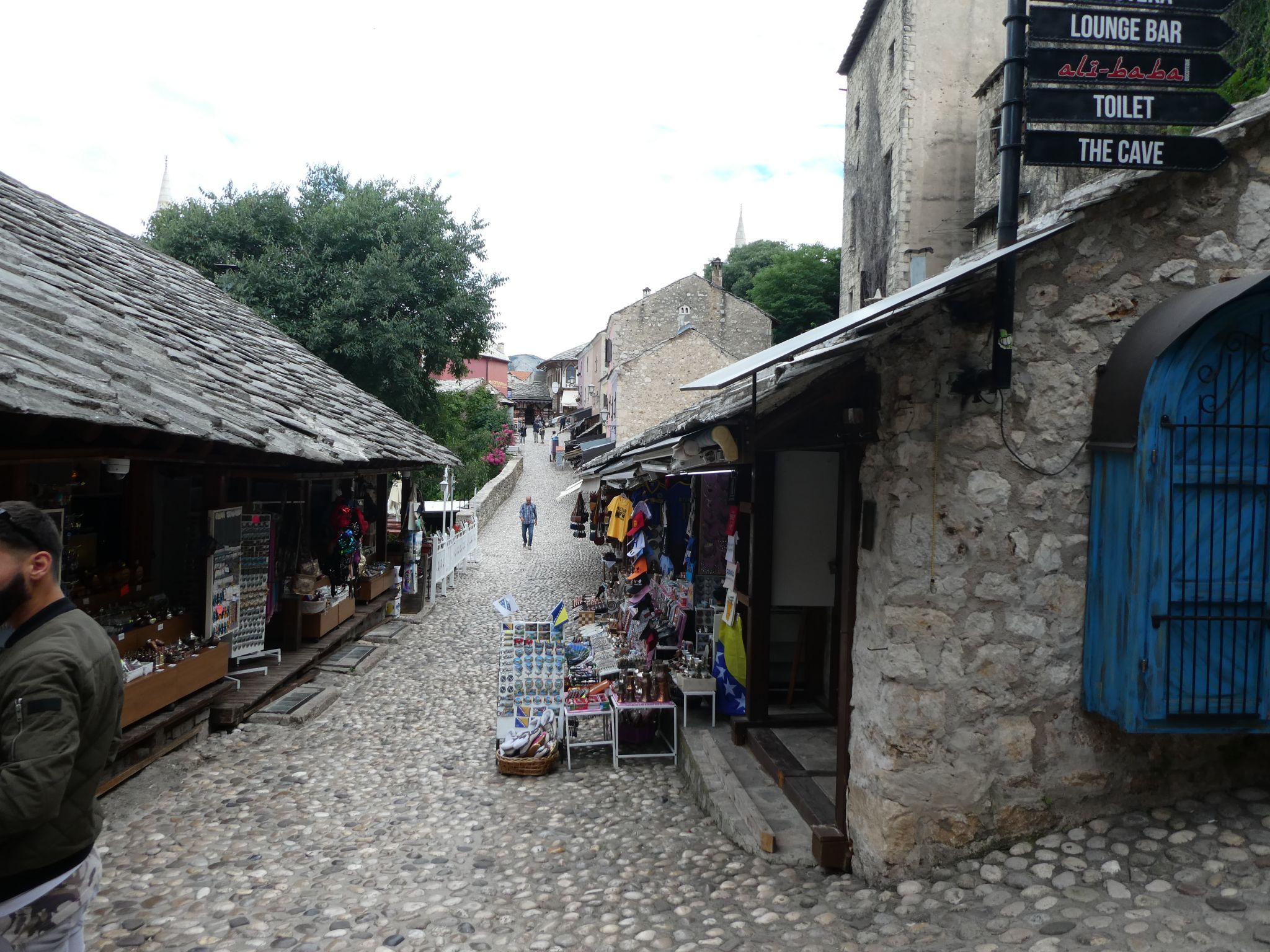 But step outside the historic centre, and plenty of evidence of the destruction remains.

This abandoned car park, itself bearing the scars of shelling, served as a vantage point from which Croat snipers harassed ordinary citizens.  It remains untouched save for the interesting graffiti which has appeared. 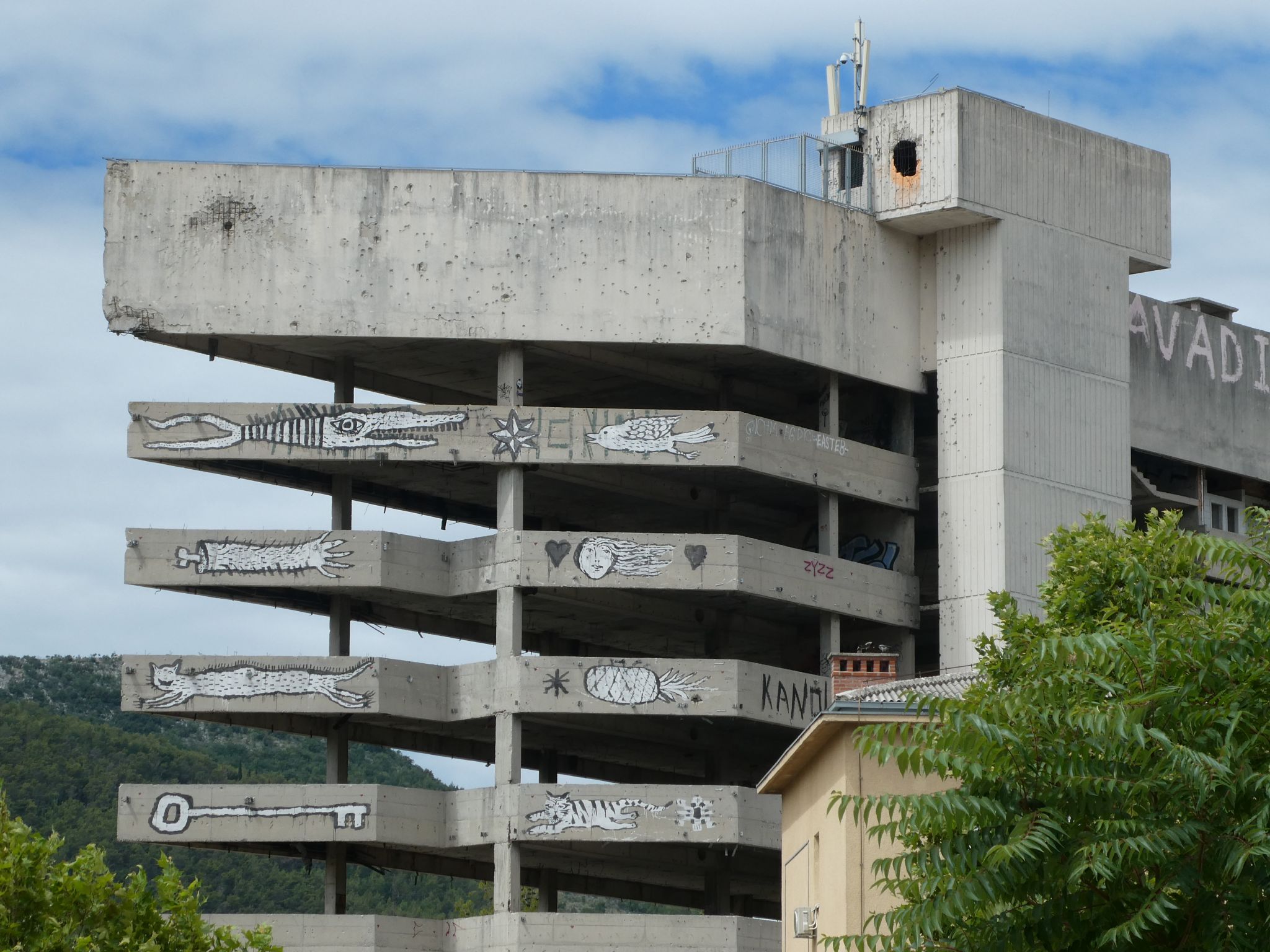 Buildings left untouched since the war show the extent to which the city was shelled. 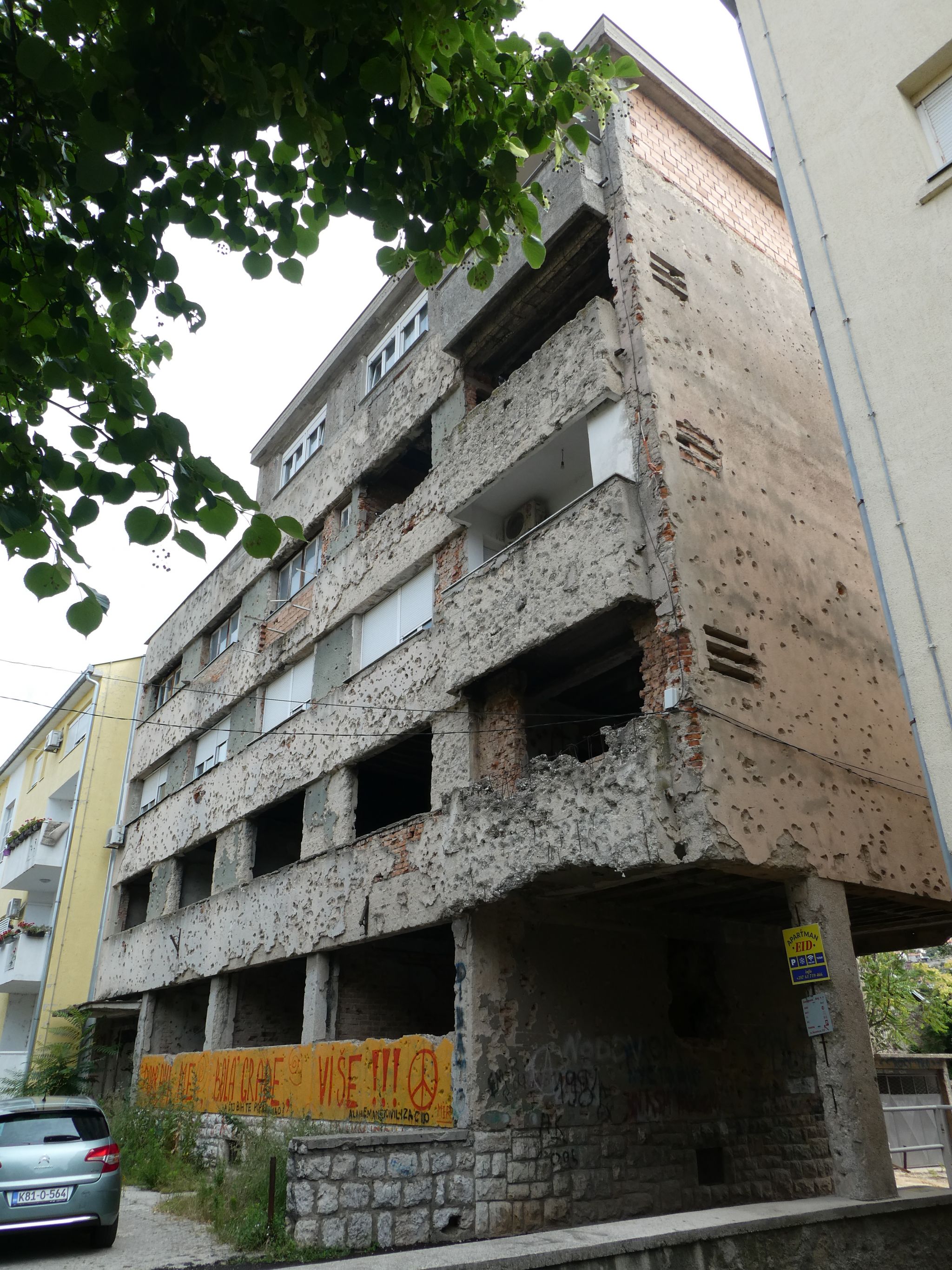 In stark contrast, in the same street are some completely reconstructed apartment blocks funded via international aid, some with interesting street art. 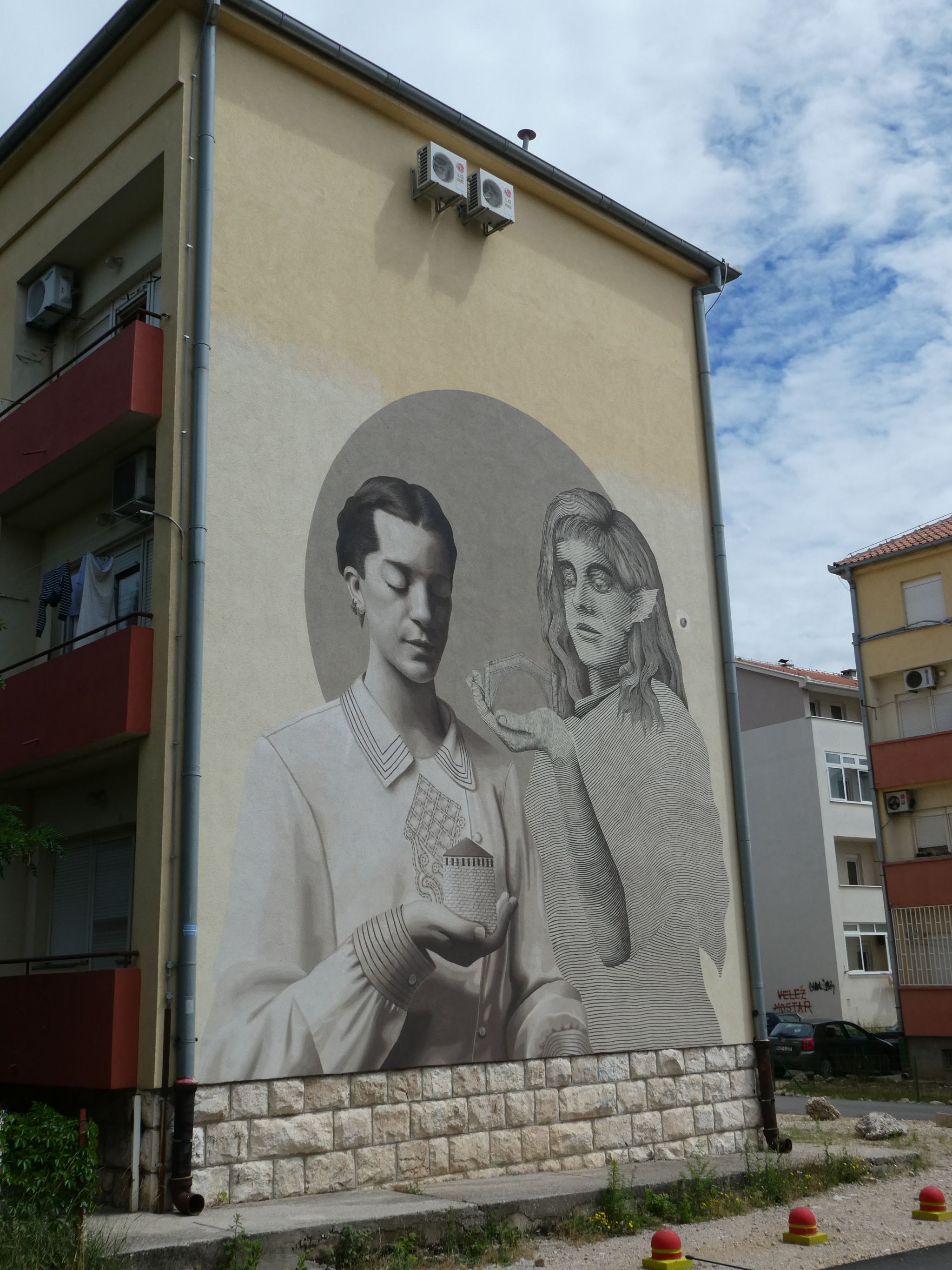 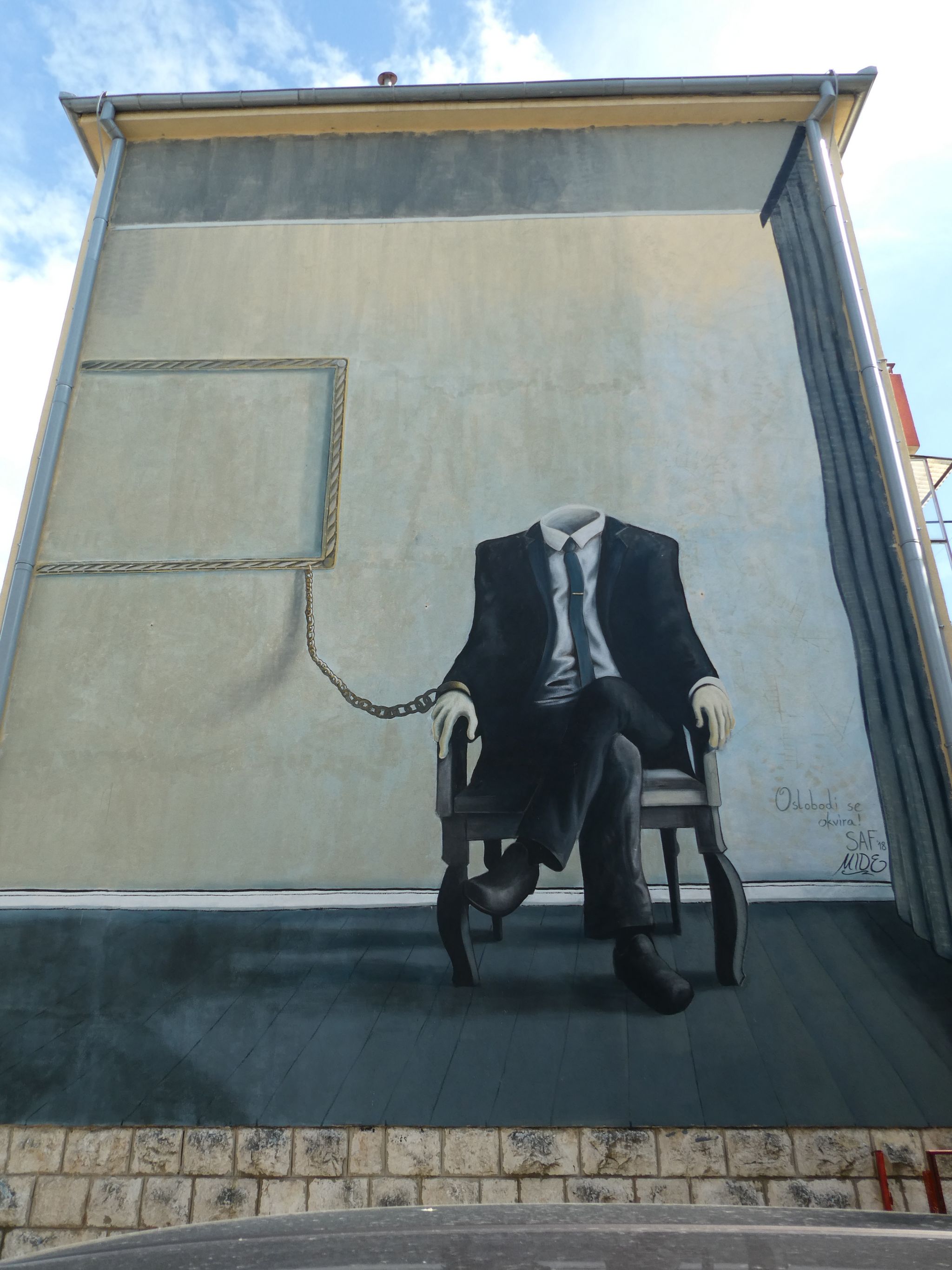 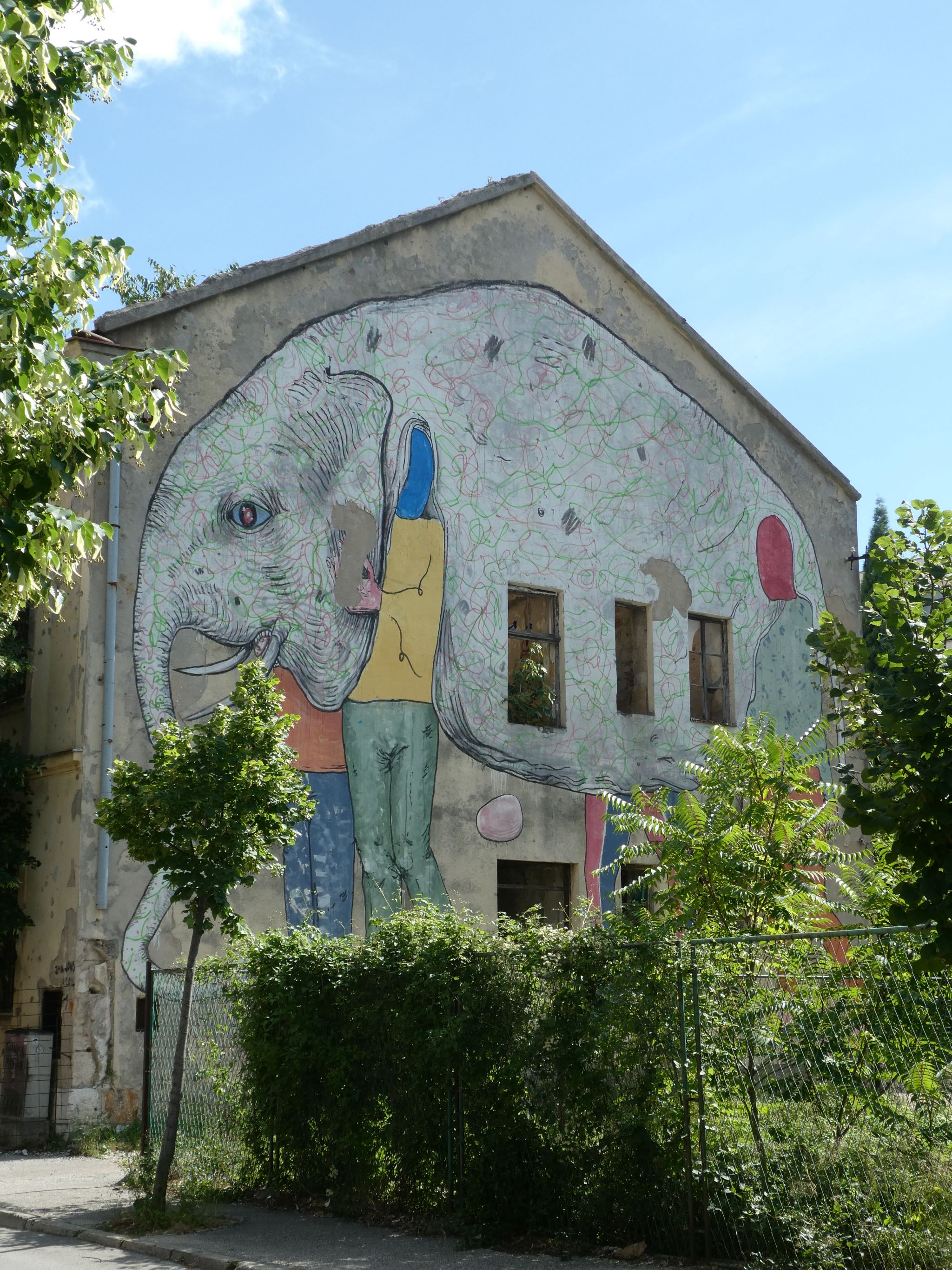 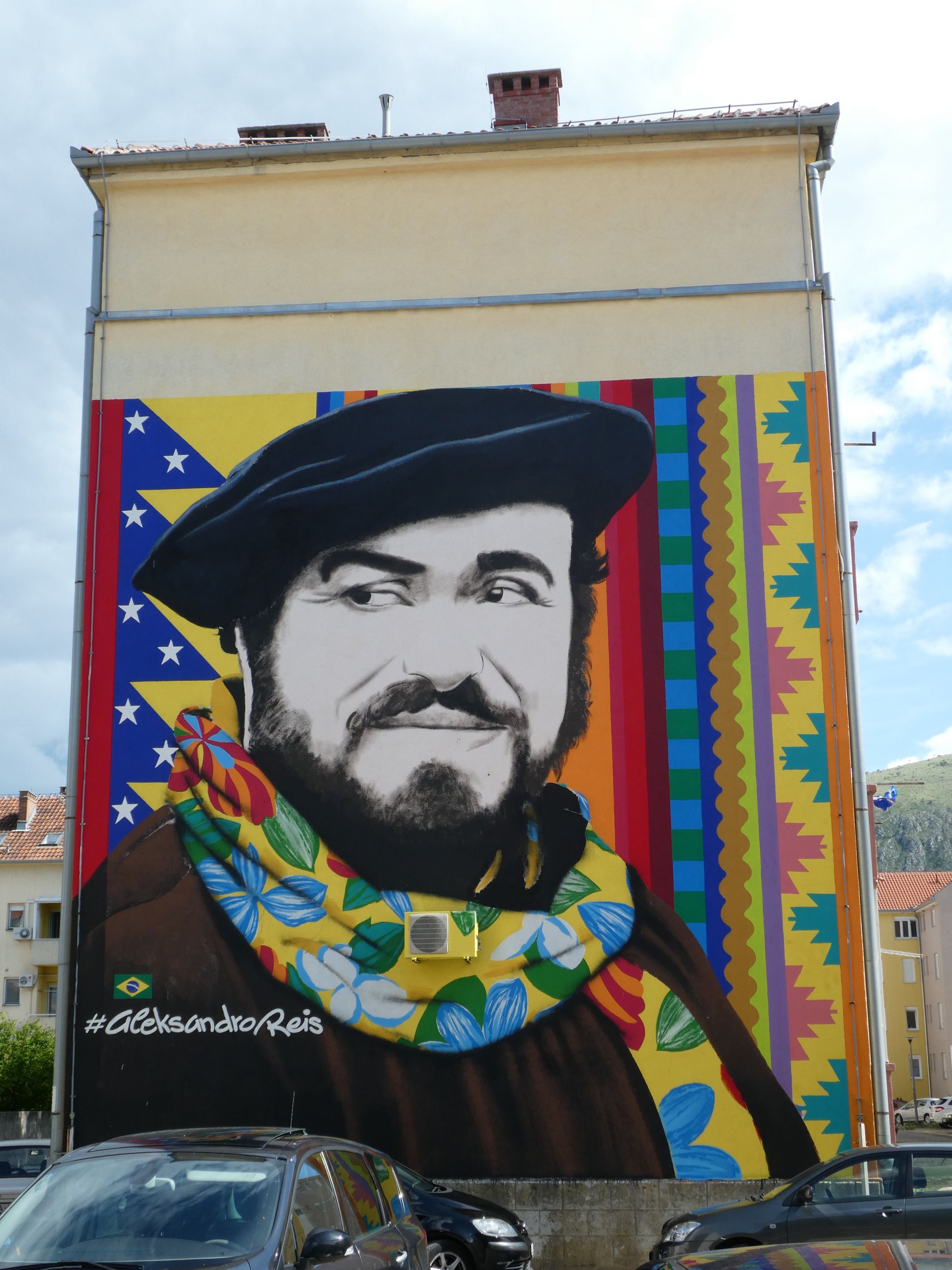 Mostar’s most famous monument is the Stari Most or Old Bridge, originally built in the mid 1500s.  Instead of foundations, it had abutments of limestone linked to wing walls along the riverside cliffs.   It was so unusual and counter-intuitive to known engineering principles, that when the decision was made to reconstruct the bridge using exactly the same techniques and materials as the original, engineers had no real understanding of why the original design worked, or whether they could safely reproduce it.

Luckily for world heritage, they could.  In a fascinating documentary we saw at the bridge museum, the chief engineer on the project essentially said that even having done it, he still can’t explain exactly why it works.

It is absolutely stunning.  During the day it is packed with visitors.  Local daredevils jump from the bridge after collecting a satisfactory amount of donations from the oogling crowd.  But we think its best appreciated just after dawn, when the town is quiet and the bridge is the domain only of sleeping dogs.  Compare these! 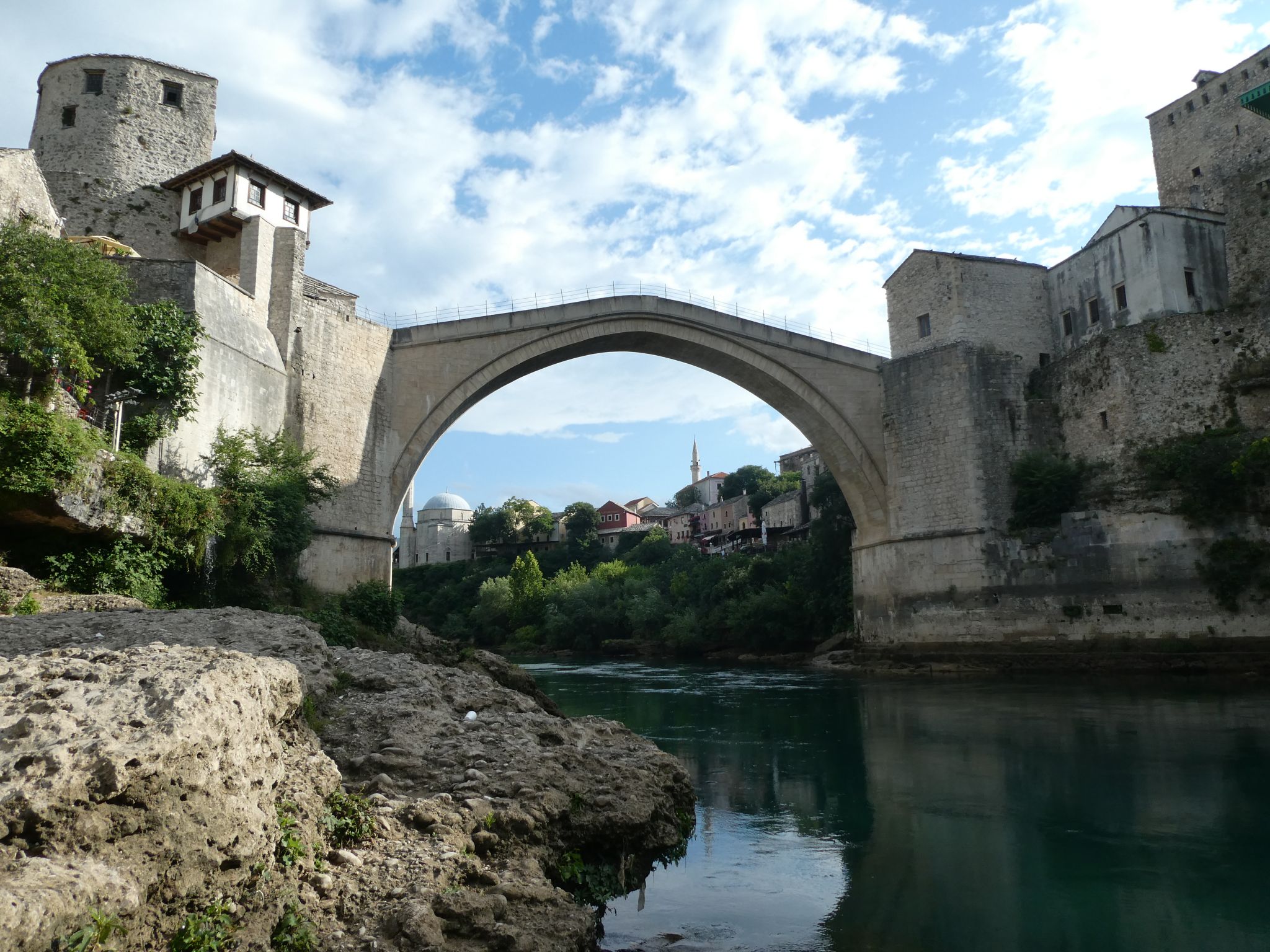 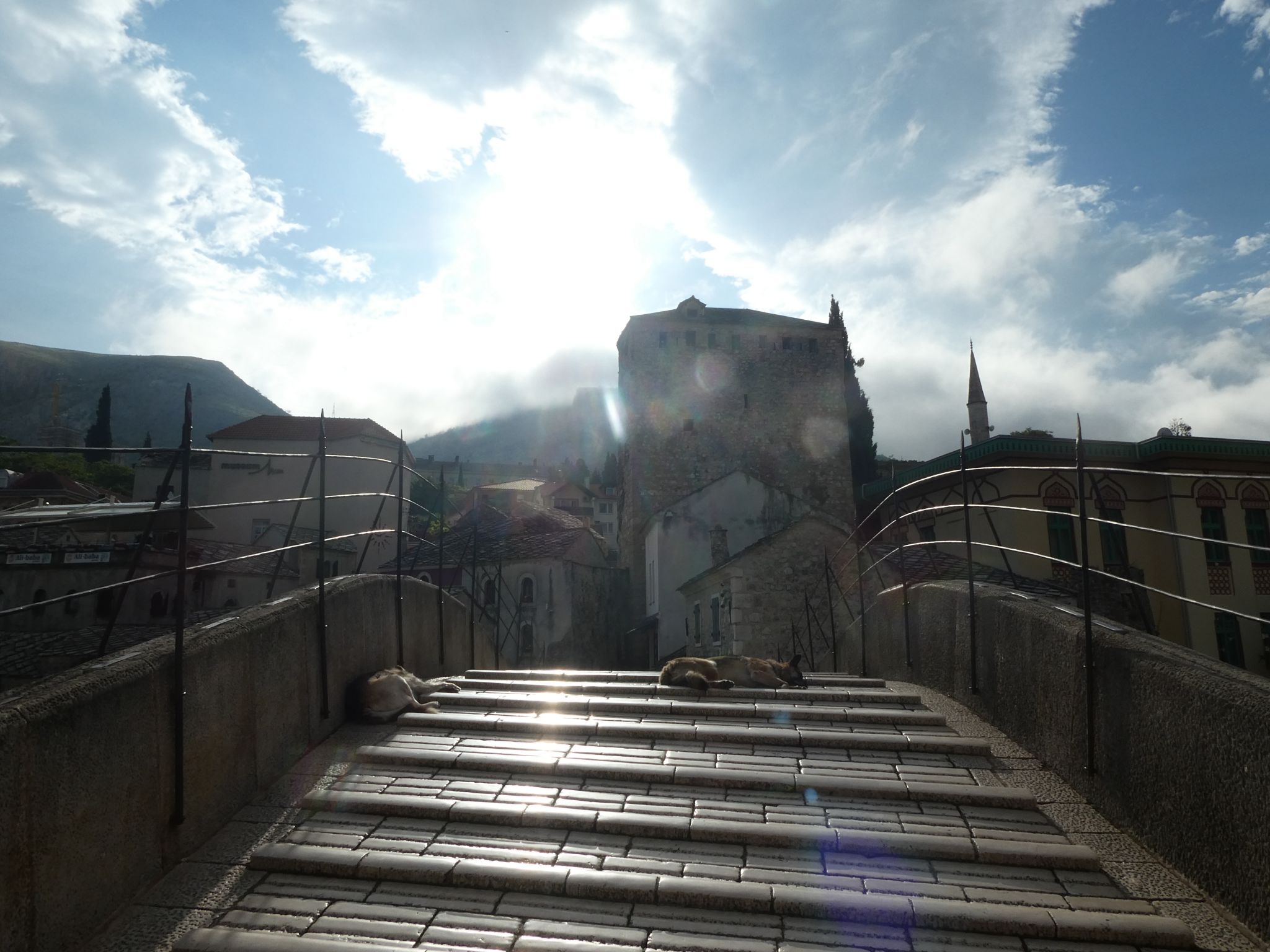 Regular readers of the blog will appreciate that we love the wacky aspects of any religious site, ritual or practice.  On that score, Medjugorje delivers in spades.

In June 1981, six local children reported seeing apparitions of the Virgin Mary on Crnica Hill near Medjugorje, 25kms southwest of Mostar.   In then communist Yugoslavia, this was a serious matter as the practice of religion was largely banned.  When authorities heard of the ‘visions’, pilgrims were banned, pilgrim’s donations were seized and access to the hill was blocked.  The local parish priest was arrested for allegedly engaging in a nationalist plot, and sentenced to 3 1/2 years hard labour.  After lobbying from Amnesty International and others, his sentence was reduced to 18 months.

One of the six claims to continue to receive messages from Our Lady on the 25th of each month, and another says she receives messages on the 6th of each month.  Our Lady is nothing if not a punctual adherent of the Roman calendar, it seems.

So there’s a simple modern church, surprisingly unadorned save for a shrine to Our Lady of Medjugorje. 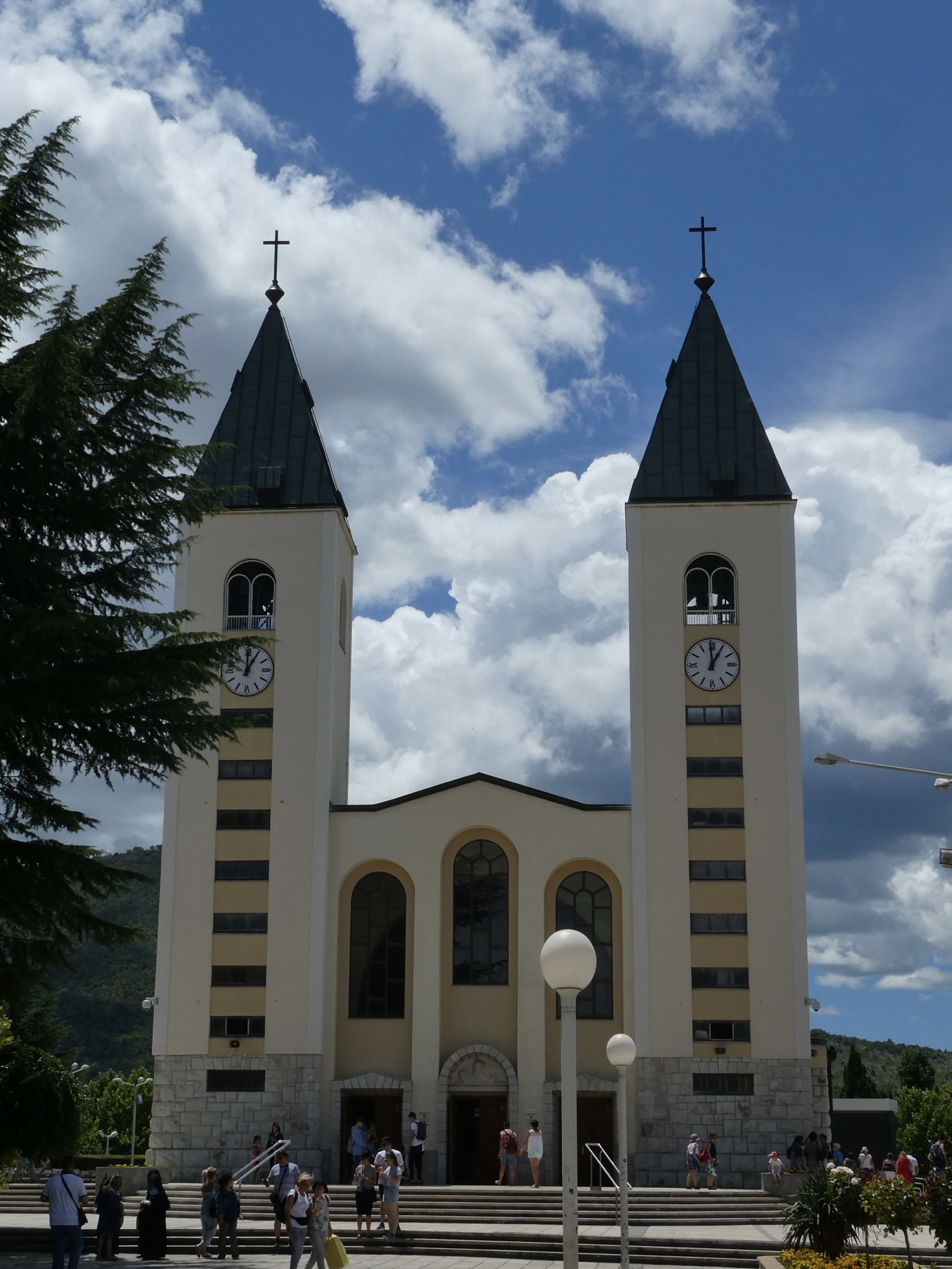 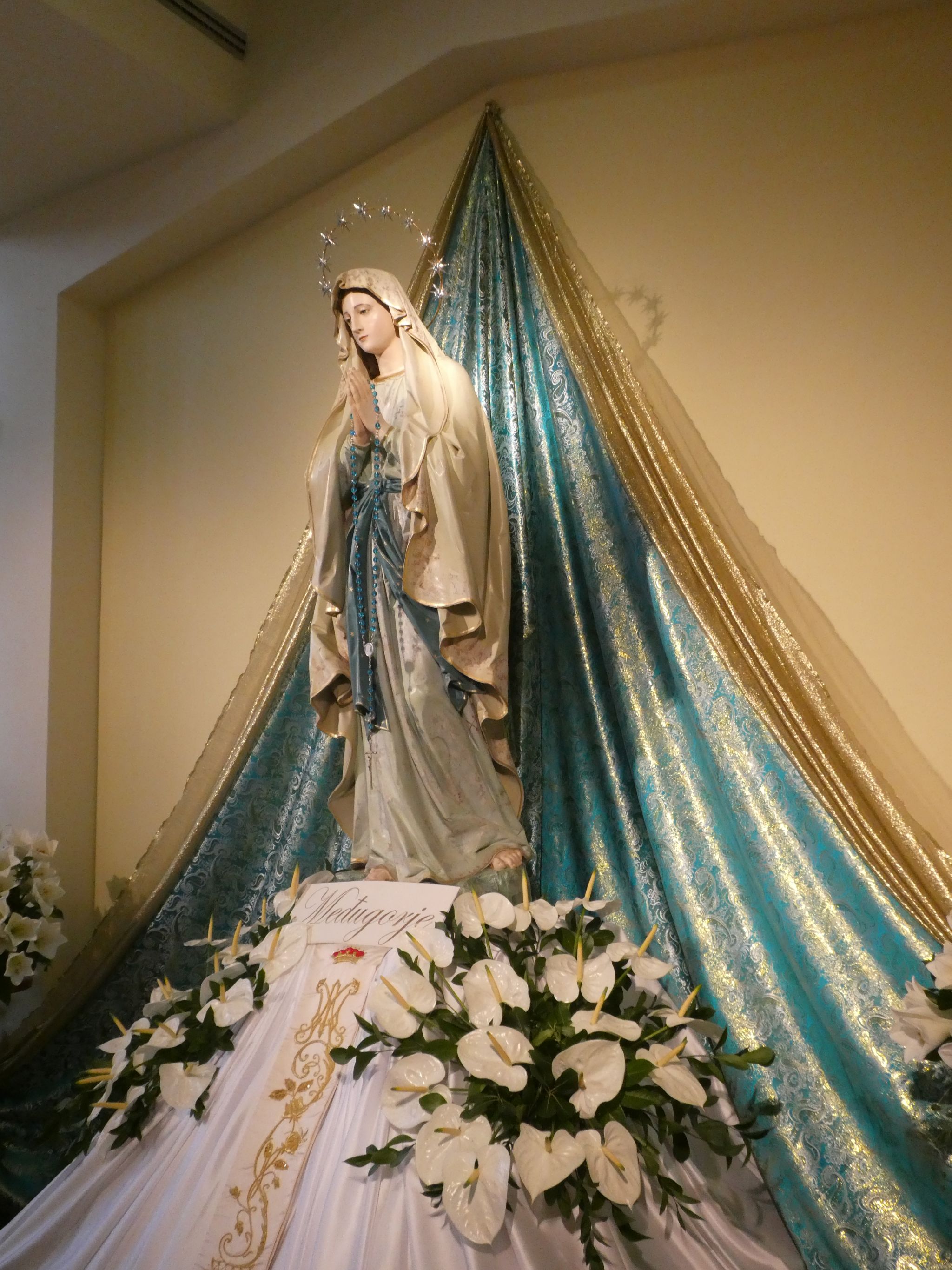 In addition to visiting the church, visitors can follow a Stations of the Cross trail to the top of Crnica Hill, now predictably called Apparition Hill.  And as if one form of miracle isn’t enough, there’s a Risen Christ statue in the grounds of the church, from which a mysterious liquid is said to ooze.  The sight of the devout fondling the leg of the statue in the hope of capturing some of this liquid is a little freaky. 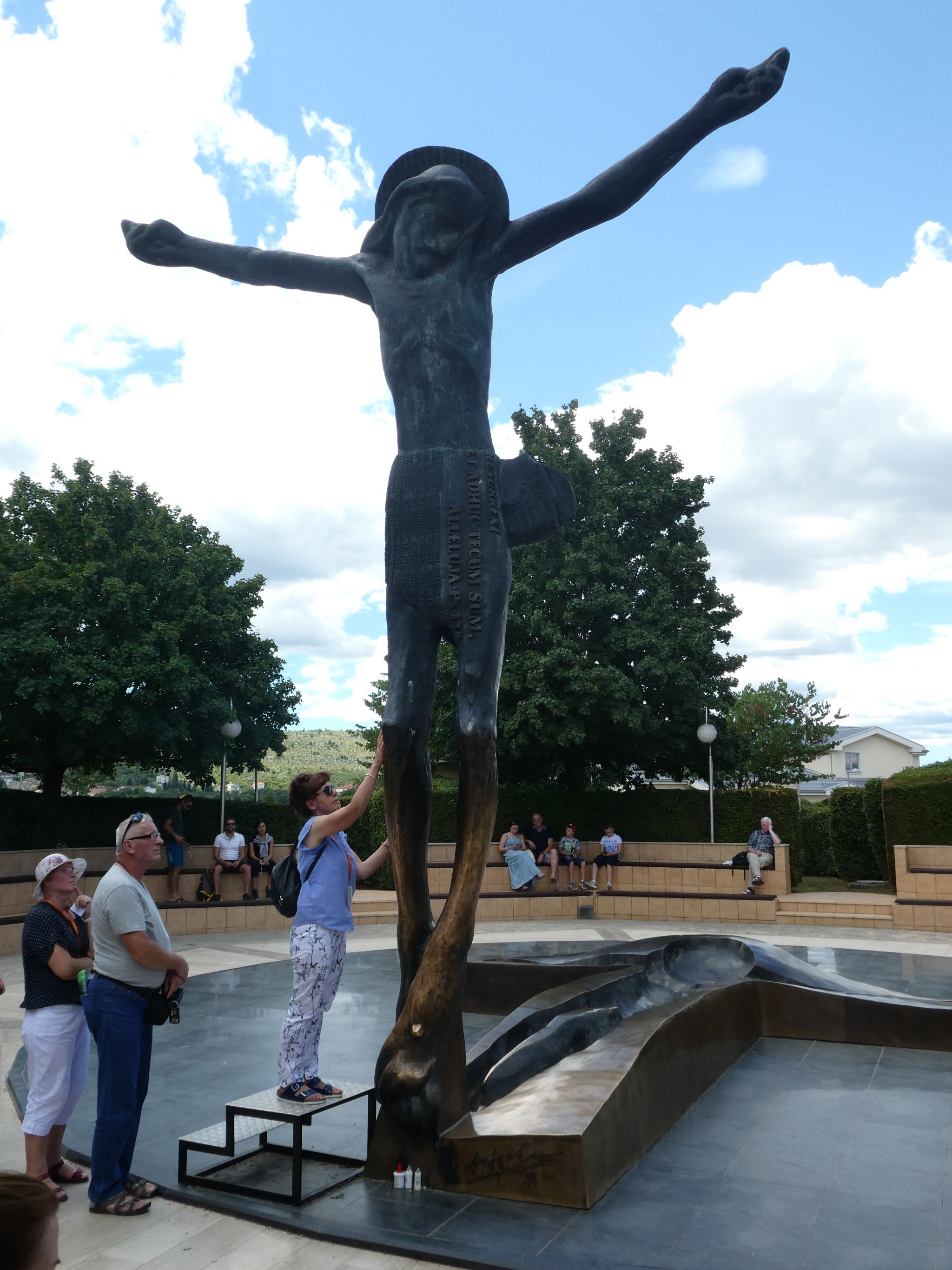 Formally, the Catholic Church has taken a cautious approach.  It has made no official pronouncement as to the authenticity or otherwise of the claimed visions.  However, it has given tacit approval to it as a pilgrimage site, essentially saying that as it encourages belief and in some cases, conversion of non-believers to the faith, it cannot be a bad thing.

Inevitably a massive industry has grown up around this.  The town is full of shops flogging Virgin Mary related, and some not-so-related, products. 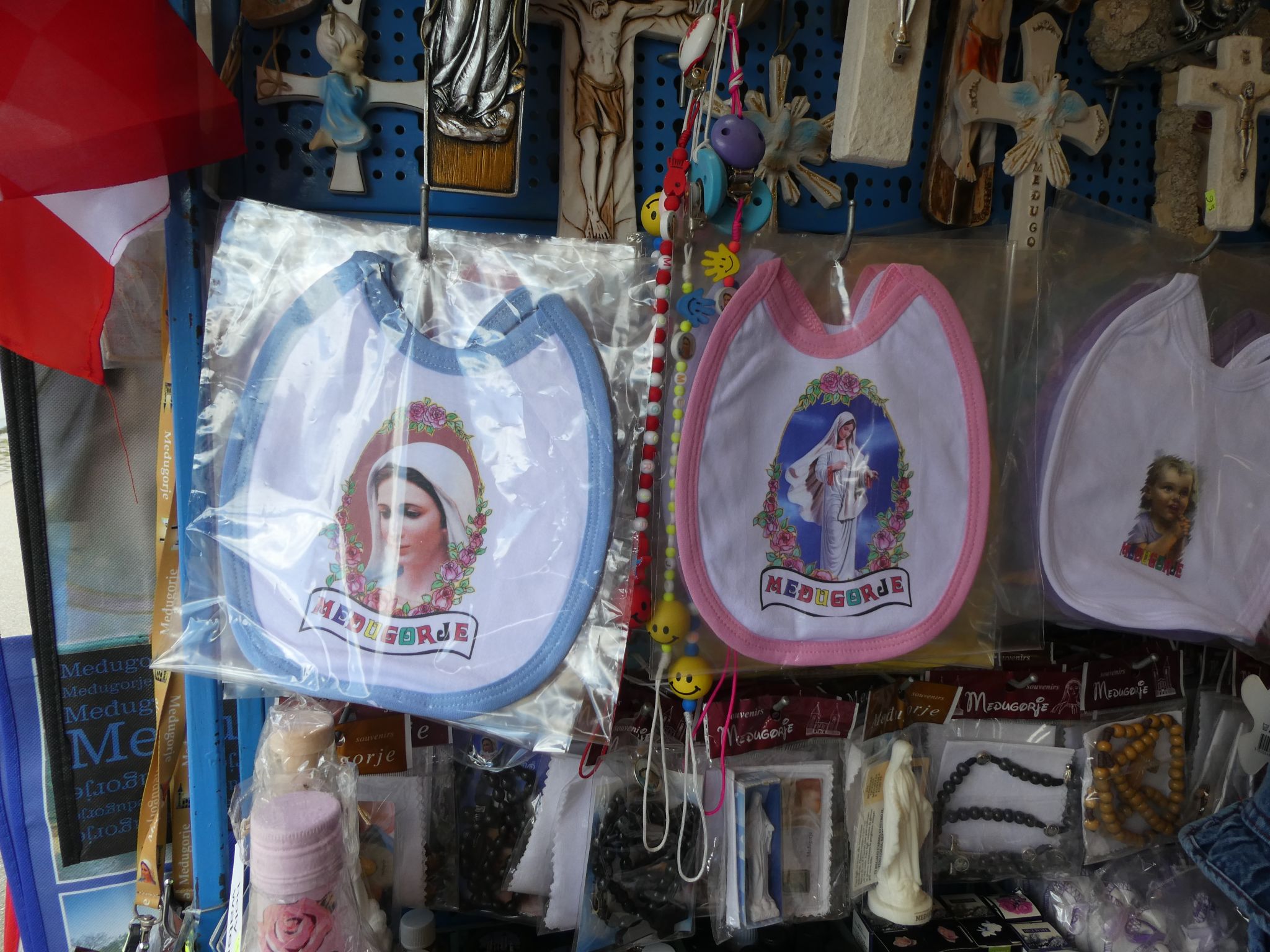 Medjugorje is now the third most visited pilgrimage site for apparitions in Europe, after Lourdes and Fatima.  Some 30,000,000 people have visited.  Yes, I guess we made it 30,000,002.