Plitvice Lakes National Park is a 295 sq. km reserve in central Croatia preserving a series of 16 terraces lakes joined by waterfalls.  It is the largest and oldest national park in Croatia, and has been a UNESCO World Heritage listed site since 1979.

The lakes are all interconnected, seperated by natural travertine barriers which grow about 1cm each year through sedimentation of calcium carbonate from the water.  We don’t profess to understand it, but we do understand it takes very specific conditions to occur, and accordingly is a rare phenomenon. 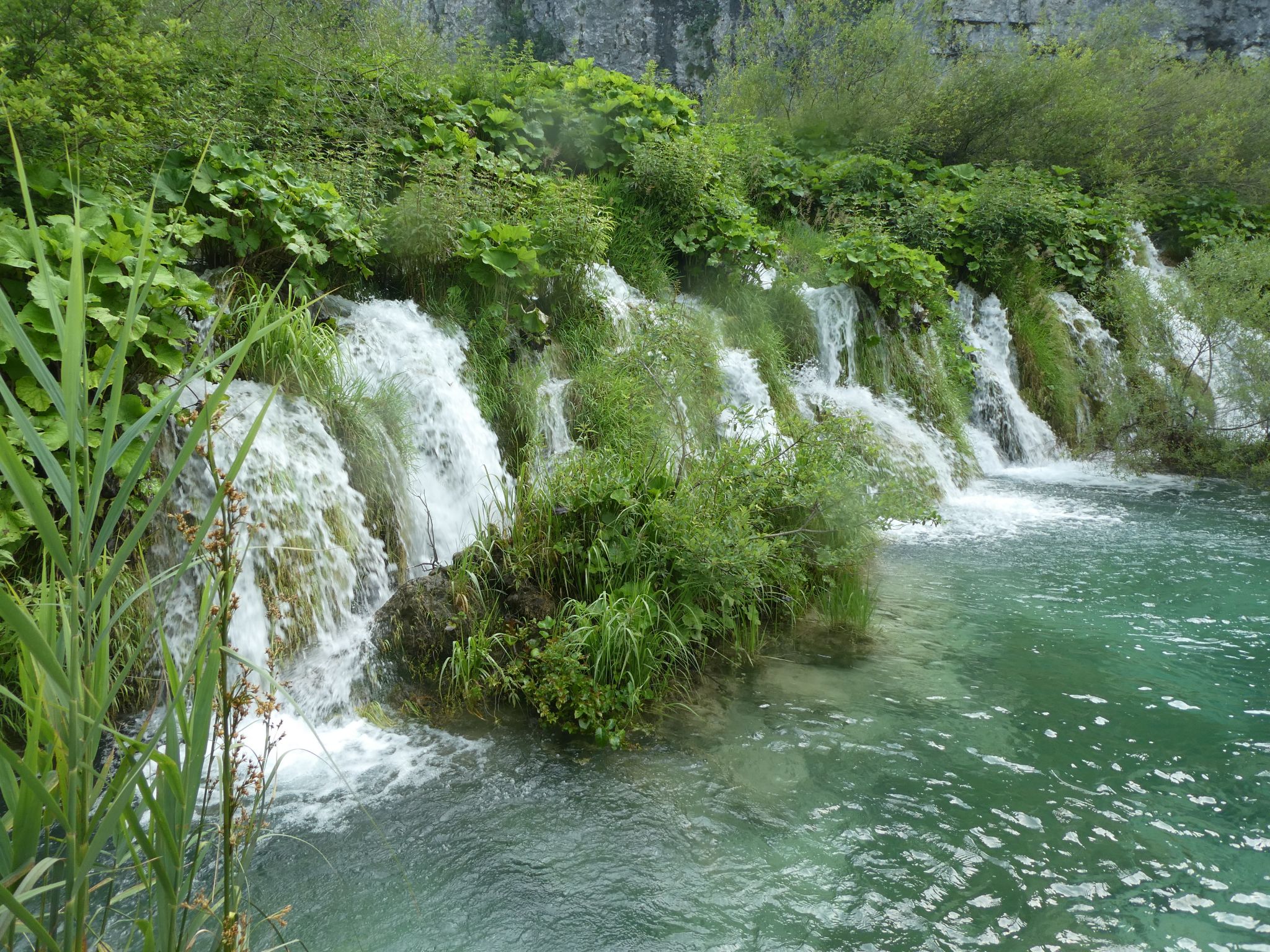 The park authority has done a fantastic job of creating walkways which circle the lakes and pass close to the waterfalls without too much disruption to the natural environment and minimal visual pollution. 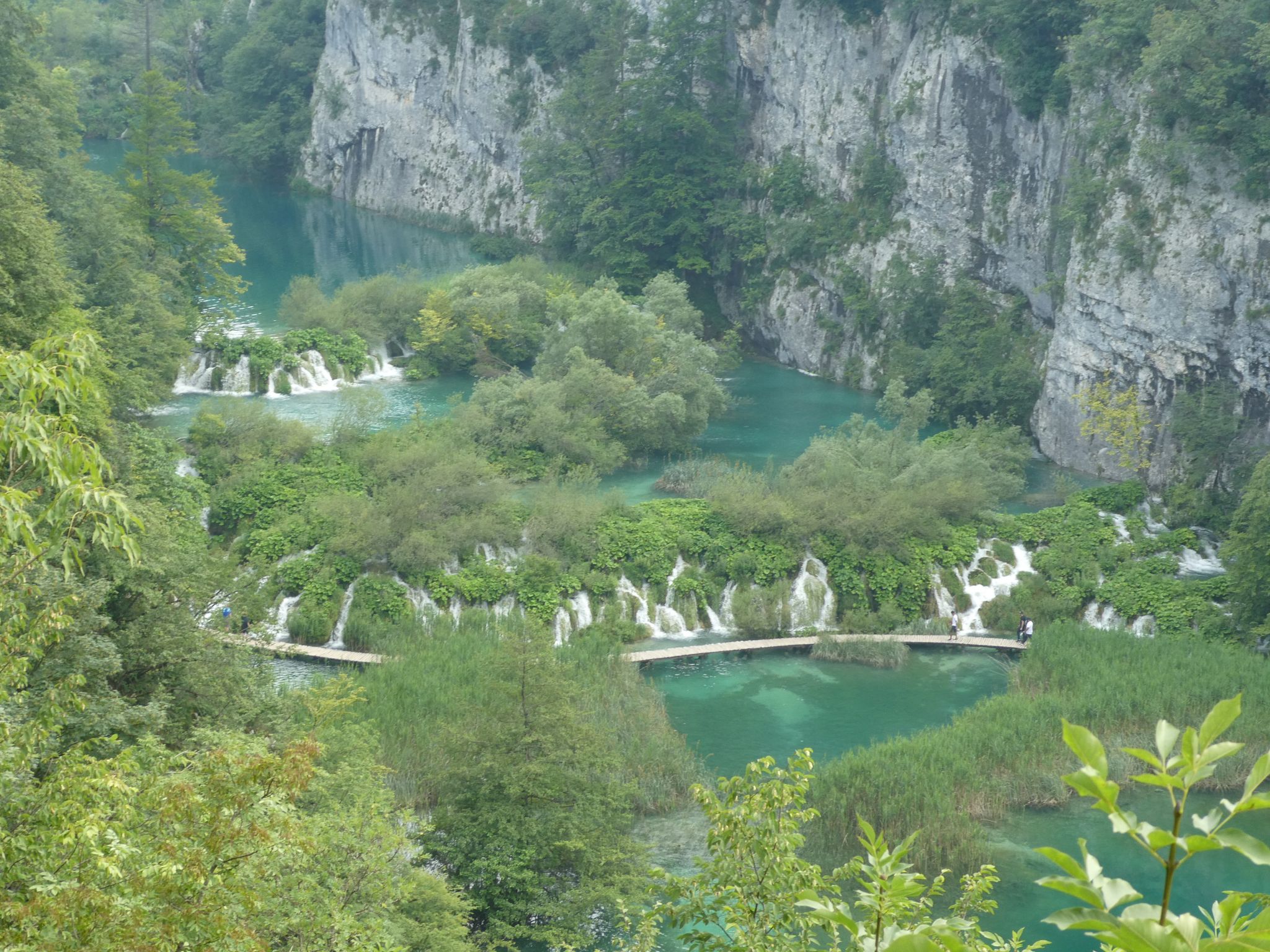 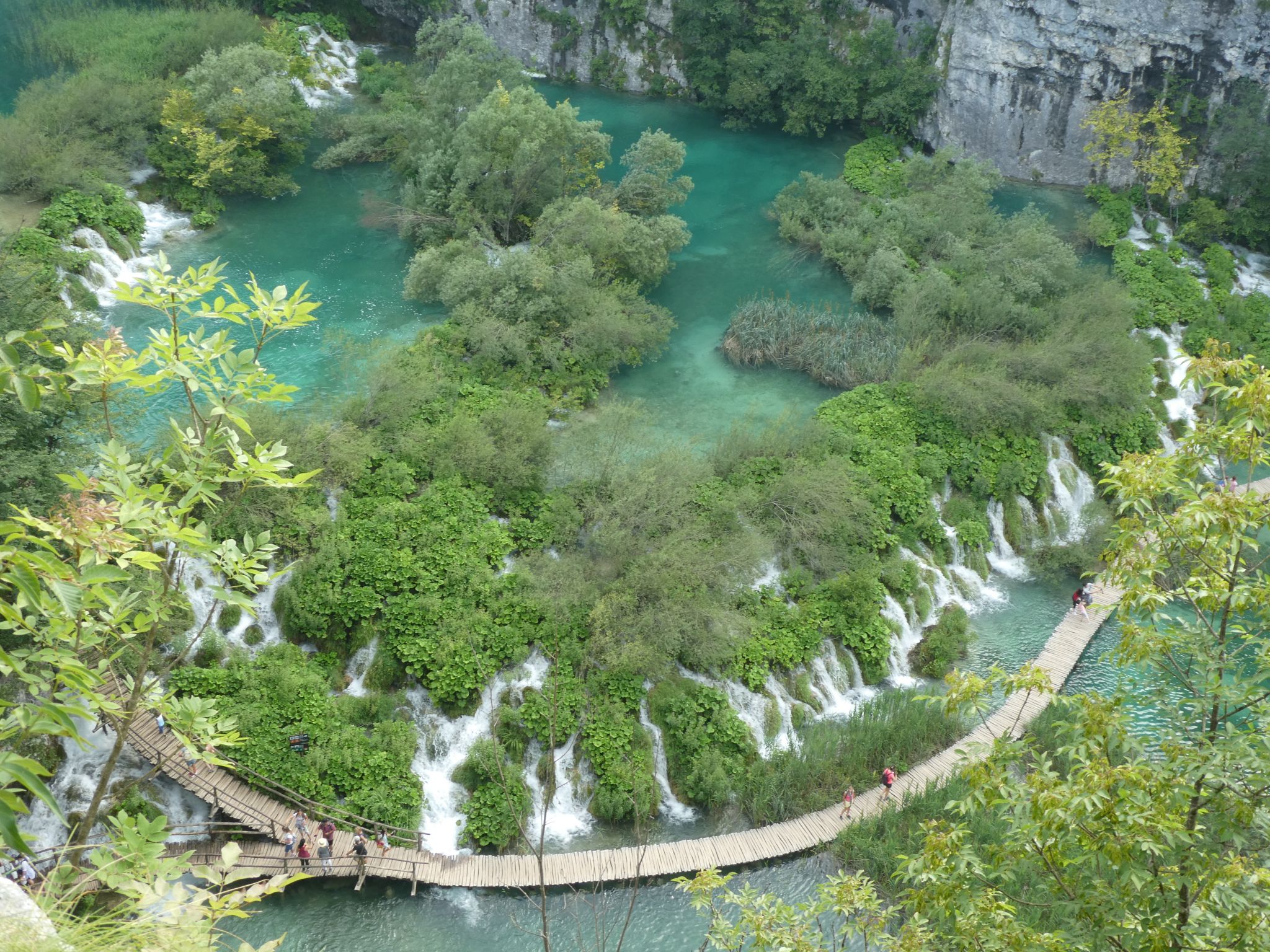 Plitvice is Croatia’s most visited national park, hosting over one million visitors a year.  That’s a lot for walking trails to absorb, and we’d read nightmare stories of clogged walkways and people jostling to even get a view from behind banks of others taking photographs.

To avoid this, we decided to stay overnight and do our visiting at the margins of the day, when at least the trails would be free of day trippers.  This proved remarkably effective.

The lakes are basically in two clusters, with walking circuits of differing lengths encircling both clusters.  There are also electric ferry boats linking various points in the lake system which conveniently allow walkers to avoid backtracking.

We arrived from Split in the early afternoon and checked into a hotel on the doorstep of the park.  With the long daylight hours of summer, we went to the park about 4pm and had more than enough time to complete the main circuit of the lower lake cluster in relative peace.  It is truly beautiful. 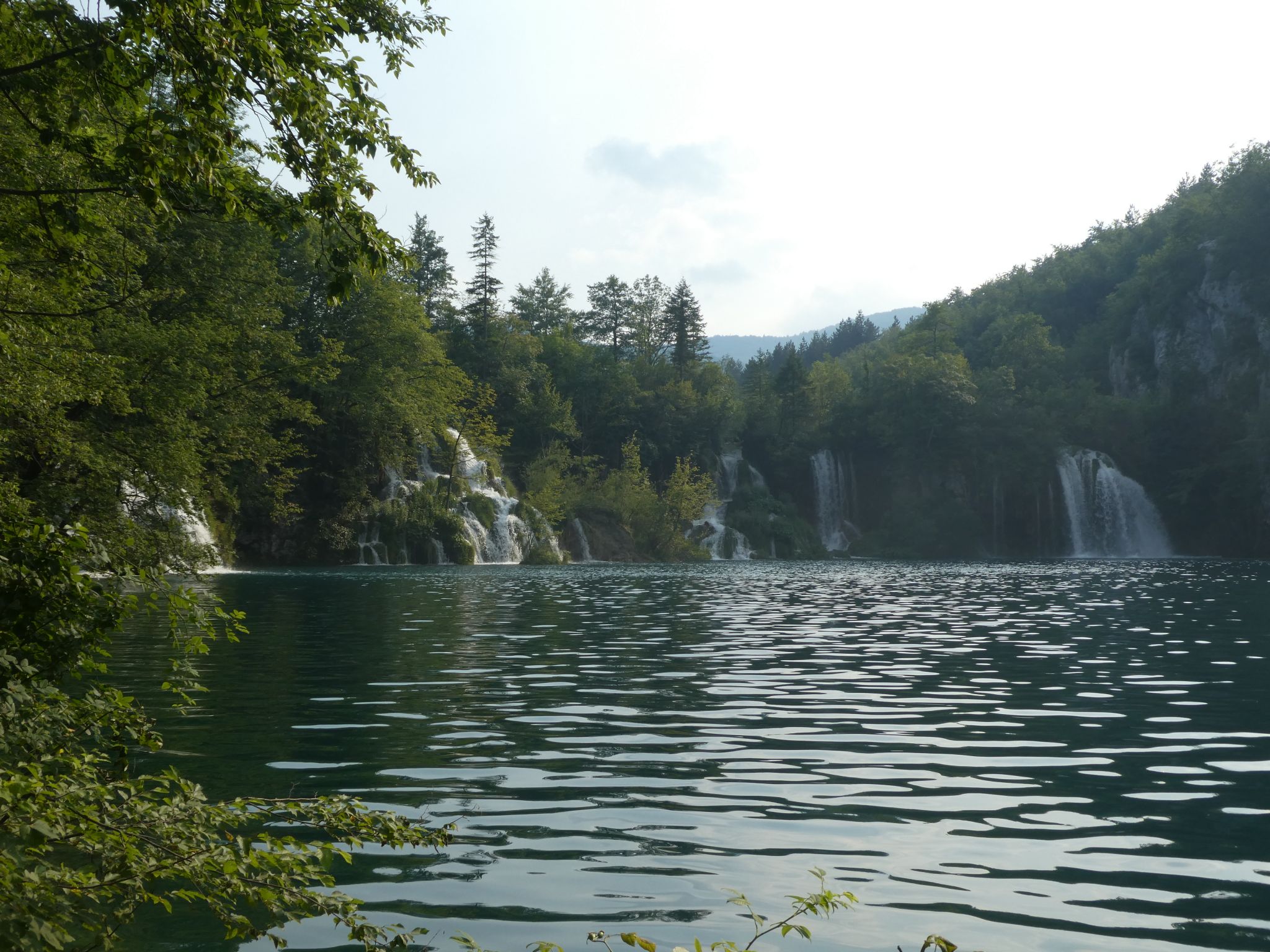 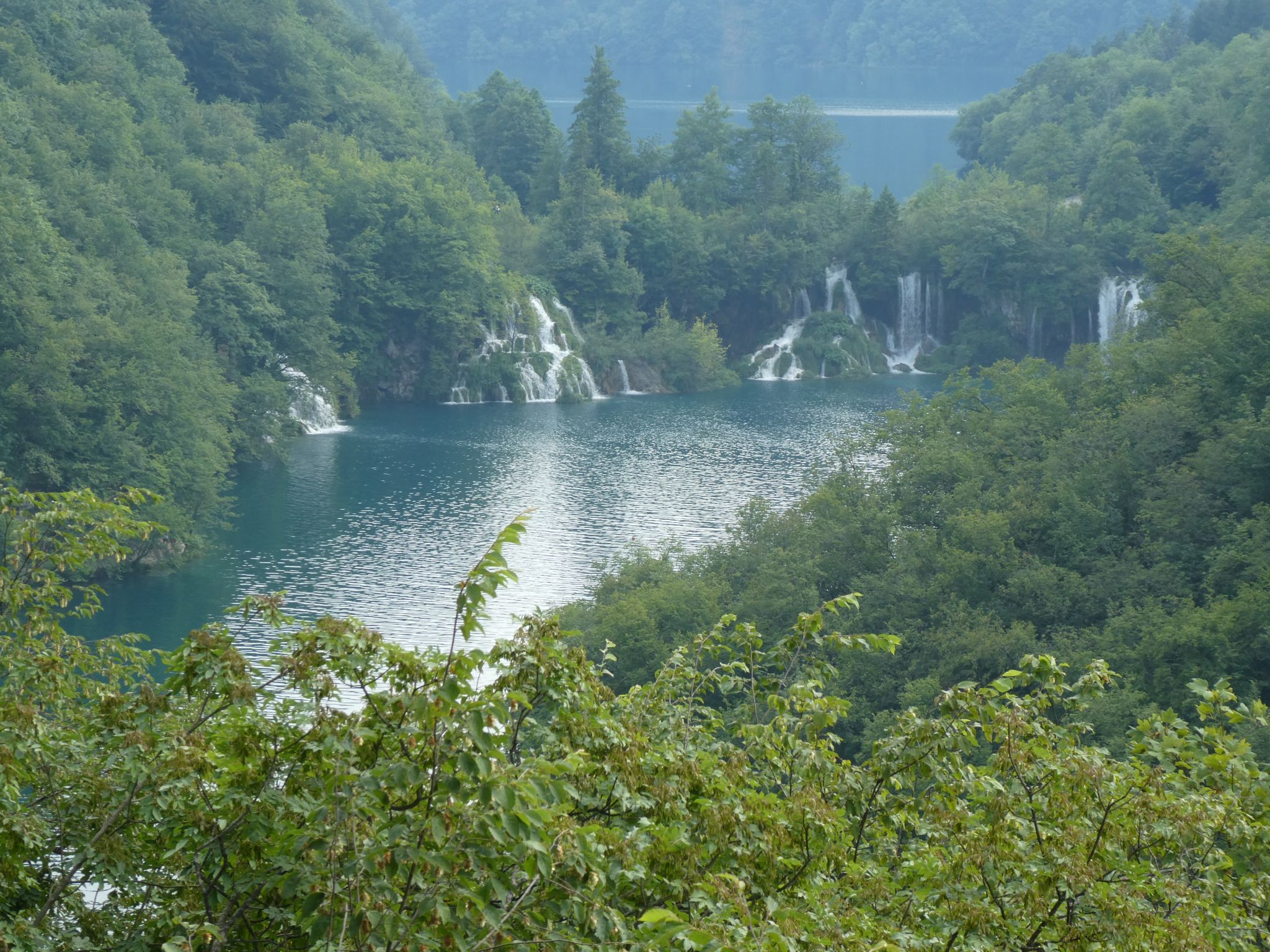 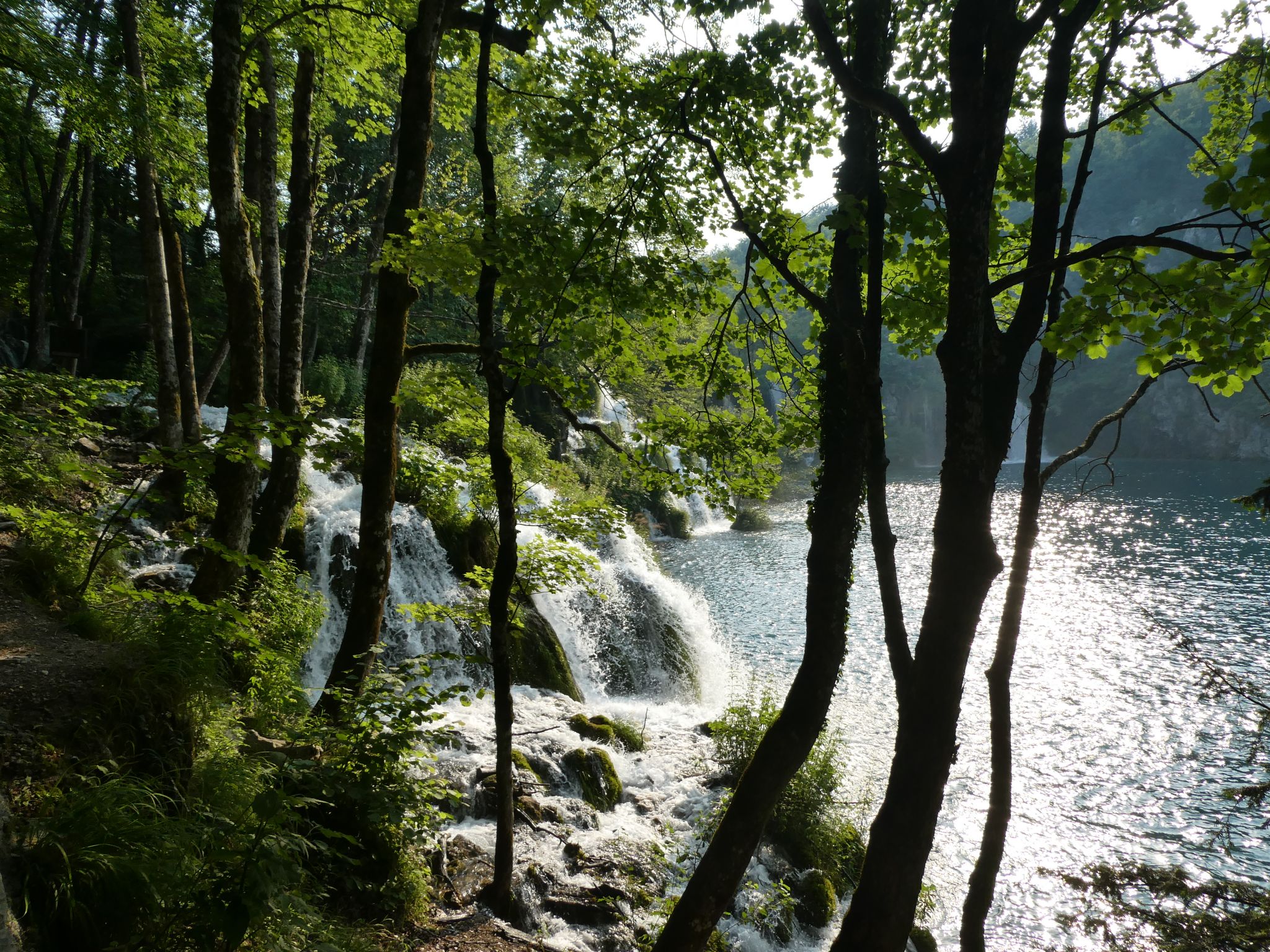 This circuit includes the highest waterfall in the park.  At 78 metres, Veliki Slap is taller than Niagara Falls, although it doesn’t have Niagara’s water volume.  It is nonetheless very beautiful. 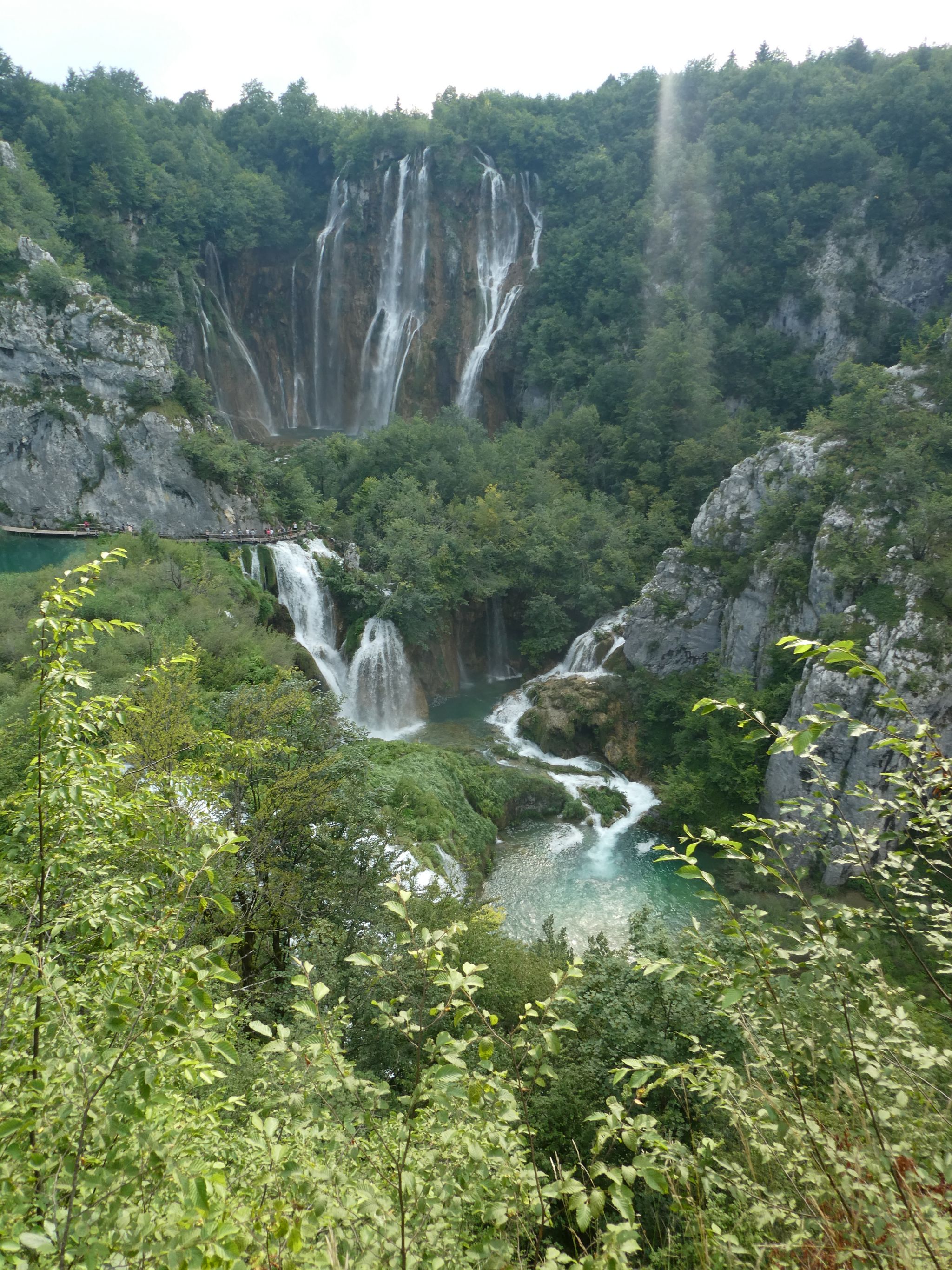 Next morning, we headed out early and completed the lower lakes circuit with almost no-one else around.  We thought this circuit was even more impressive than the upper lakes. 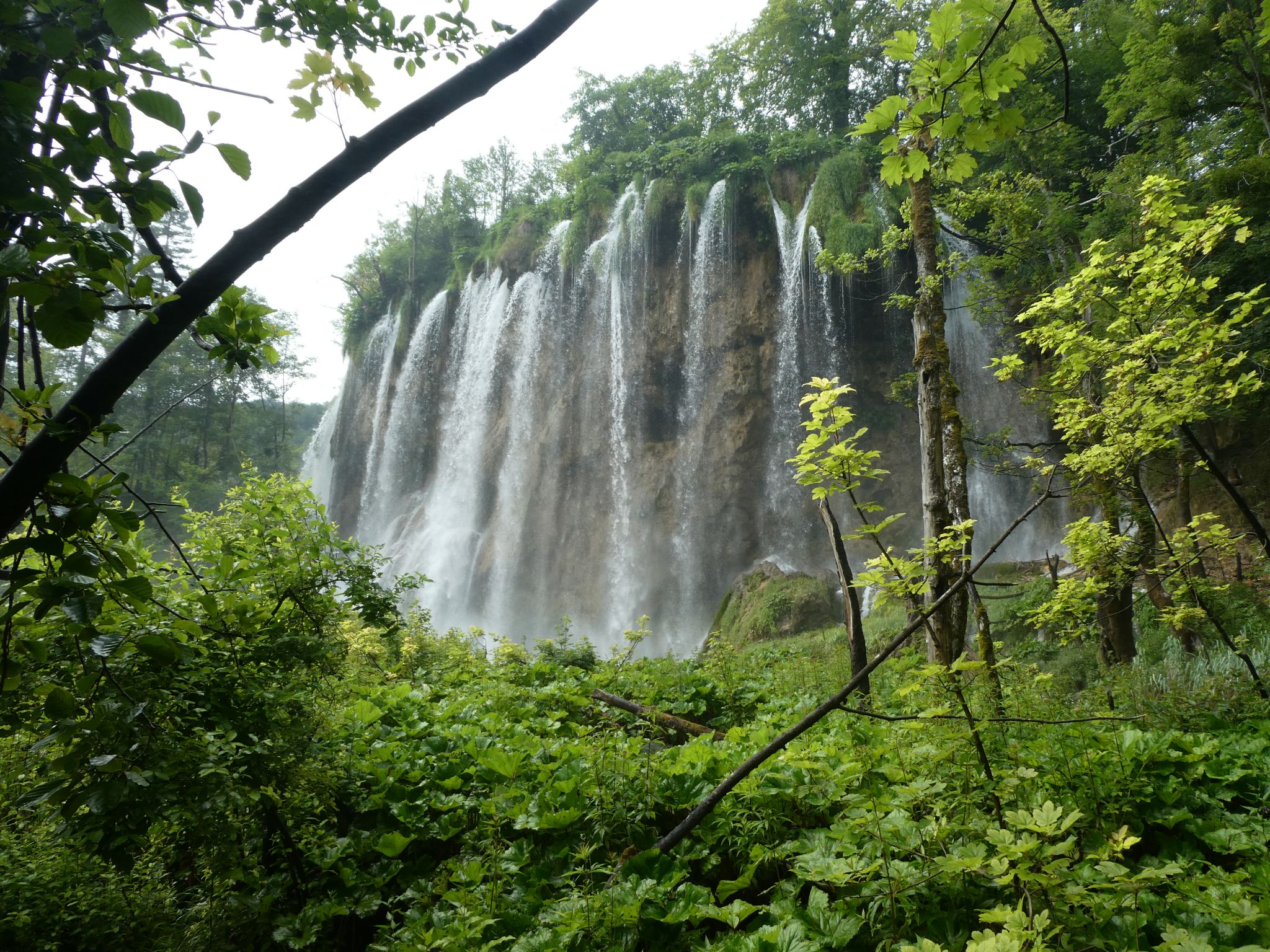 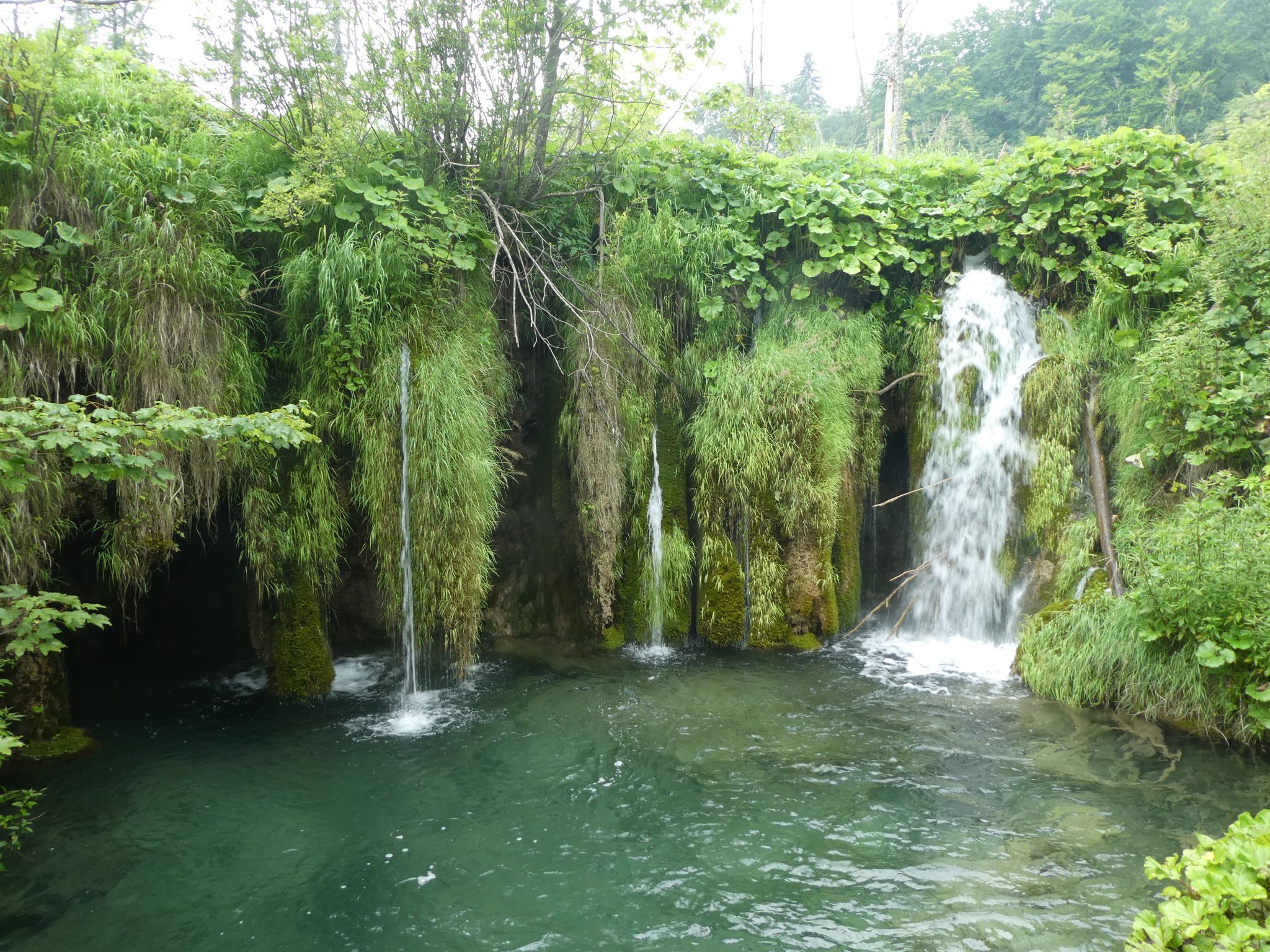 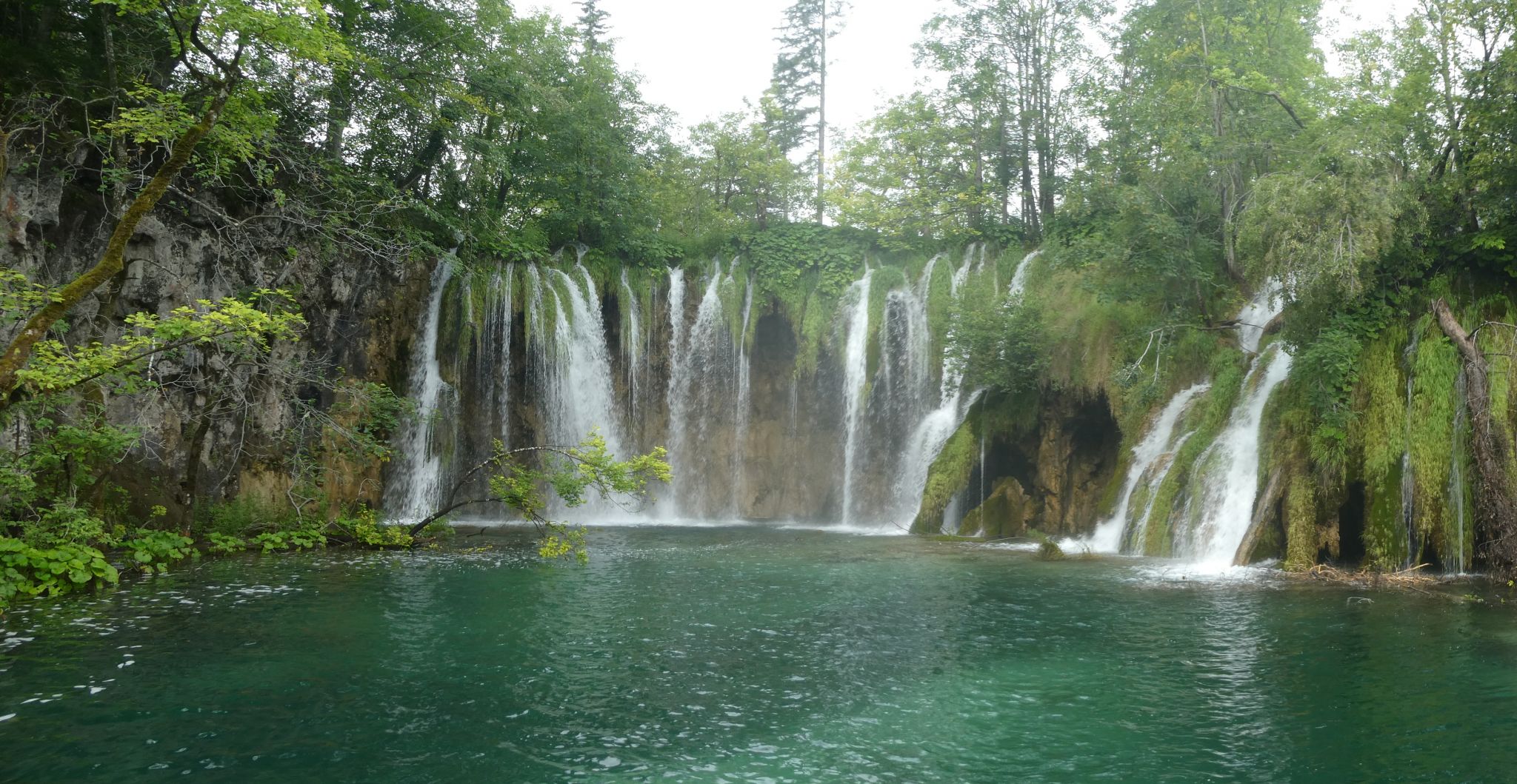 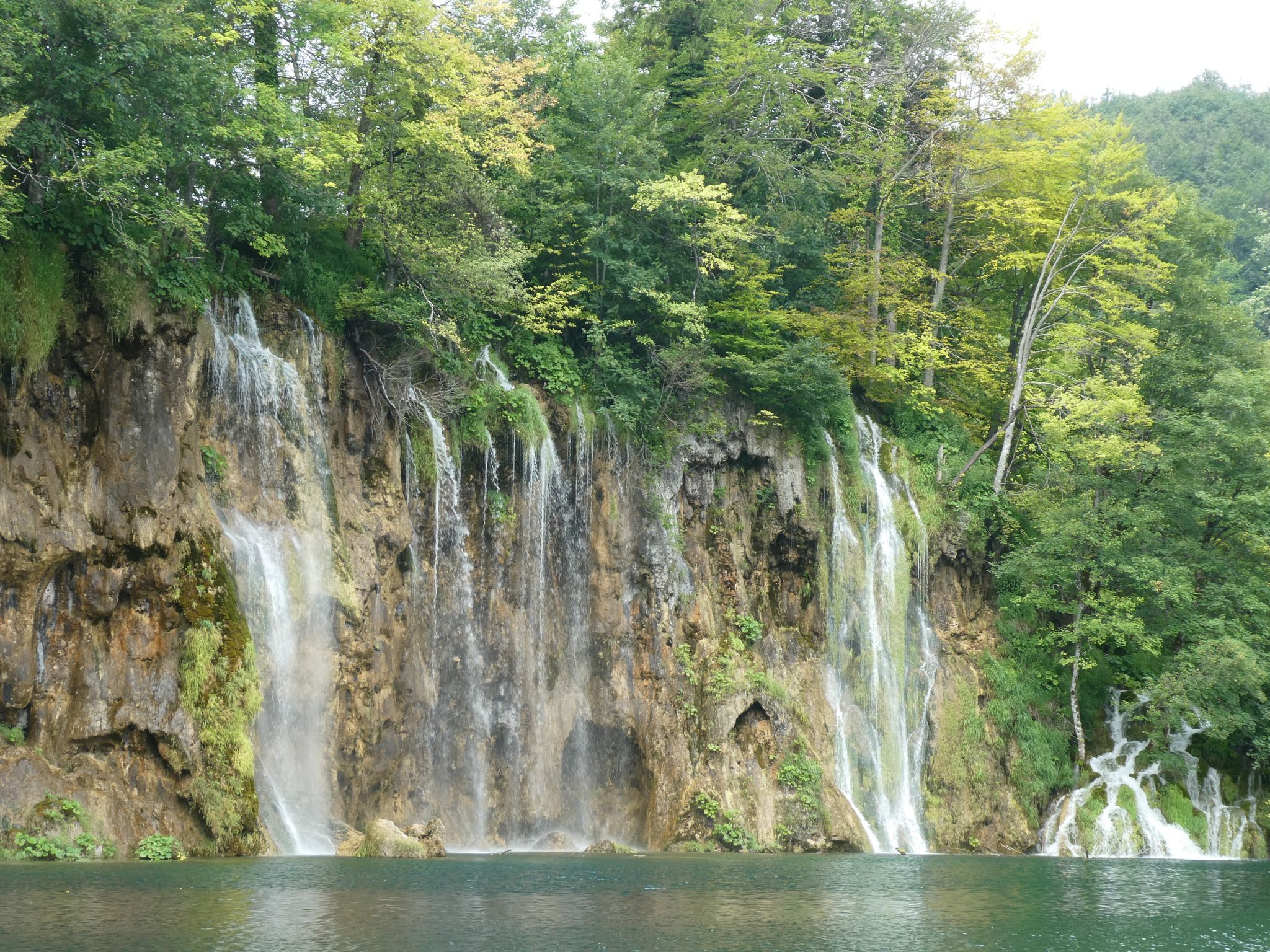 By the time we finished, there had been a noticeable increase in foot traffic.  As we came off that circuit, we spotted the dreaded flag of a tour leader and, sure enough, a conga line of about 40 people dutifully following along.  The first of many.  We felt like we got out just in time.

There are many other trails away from the lakes, passing through forest areas.  Some people stay a few days more and walk these.  But for us, 24 hours was enough to cover the lakes and waterfalls, and then jump on a bus to Zadar, our final destination in Croatia.