Who doesn’t love puffins?  Those comical little faces that have earned them the nickname ‘the clowns of the sea’ are just too endearing.

To see puffins, requires both good luck and good planning.  Quite literally, you need to be in the right place at the right time, because these reclusive little blighters are very fussy about when they come to the land and where.

Puffins spend from around late August to the beginning of May at sea.  Totally at sea.  Far out in the North Atlantic Ocean.  So forget about seeing them then.  They just are not around.

In about May, they come back to the land to build a nest, hatch their chicks (pufflings – surely the cutest word in the English language) and feed them until they are able to fend for themselves, and then in about August they all take off again until next year.

That makes identifying the puffin-sighting season reasonably straightforward.  May to August.  But where to find a puffinery?

Unlike clowns, puffins are rather isolationist.  Their chosen nesting grounds are high cliffs in uninhabited places.  Mostly they love the Orkney Islands, the Shetland Islands and a bunch of tiny islands and specks on the Scottish coastline that no-one outside Scotland has ever heard of.

Lucky for us, the Isle of May also meets the puffin criteria of high cliffs in an uninhabited island, but its just 35 minutes on the train from Edinburgh to North Berwick and then less than an hour by boat.  And it’s the biggest puffin colony on the east coast of Britain, so if you come at the right time, sightings are pretty much a certainty.

The entire island is a nature reserve and access is prohibited except via a very few licensed boat operators who are permitted to land visitors under strict conditions as to visitor numbers and timing of visits.

Having sussed all this out ahead of arriving in Edinburgh, Julie’s excitement at finally seeing puffins – bucket list item – turned to panic when she discovered that there were no available seats for weeks.  The prospect of convincing John to make a special deviation to somewhere remote to see puffins was about 90%, but only if there was a military aircraft museum somewhere in the vicinity.

But then, ka-ching.  Against all hope and expectation, she checked the Scottish Seabird Centre website yet again and, unbelievably, two seats had become available for …. tomorrow!  She snapped them up in an instant.  When we presented the next day, the check in person said they’d had a cancellation and we must have been looking within minutes of it going up.

Anyway, to the trip itself.

The Scottish Seabird Centre runs a rigid inflatable boat carrying just 12 visitors to the island once a day during the puffin season.   The sea was benign and the trip was comfortable.

On the way over, we saw some curious seals. 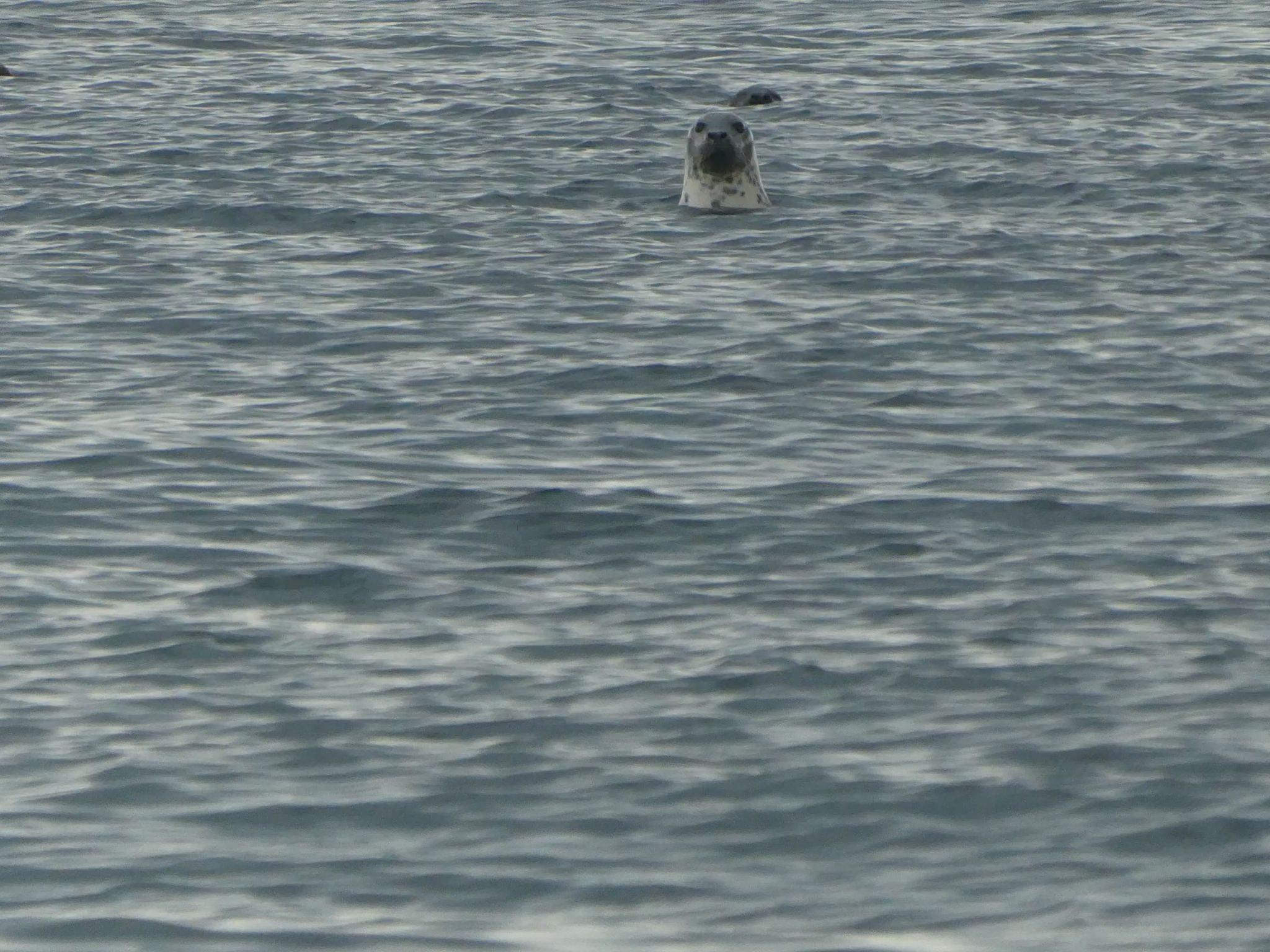 There are about 20,000 puffins on the Isle of May this year.  It wasn’t hard to find them. 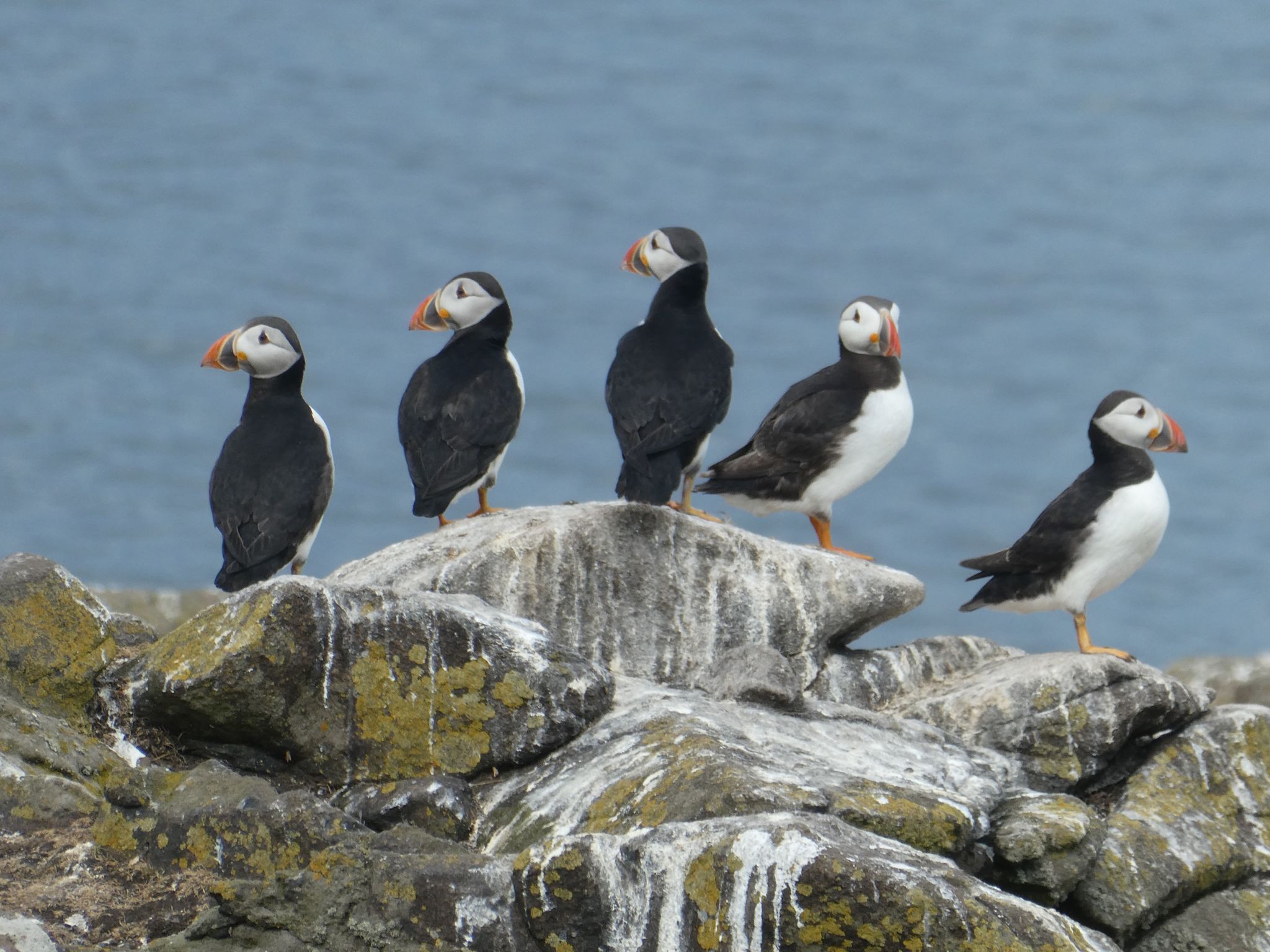 Puffins have an unusual beak arrangement, with spines in their upper palate that enable them to hold ten or more small fish crosswise in their beak.  This means they can bring a much greater food load back to the nest in one trip, rather than having to make repeated forays to the ocean.

But this is not without risk.  Gulls predate the puffins, seeking to steal the fish to feed to their own young, and even preying on the puffin chicks.  Puffins returning to the island with fish will often sit on the cliffs, watching and waiting until the coast is clear (so to speak) before attempting to enter their nest. 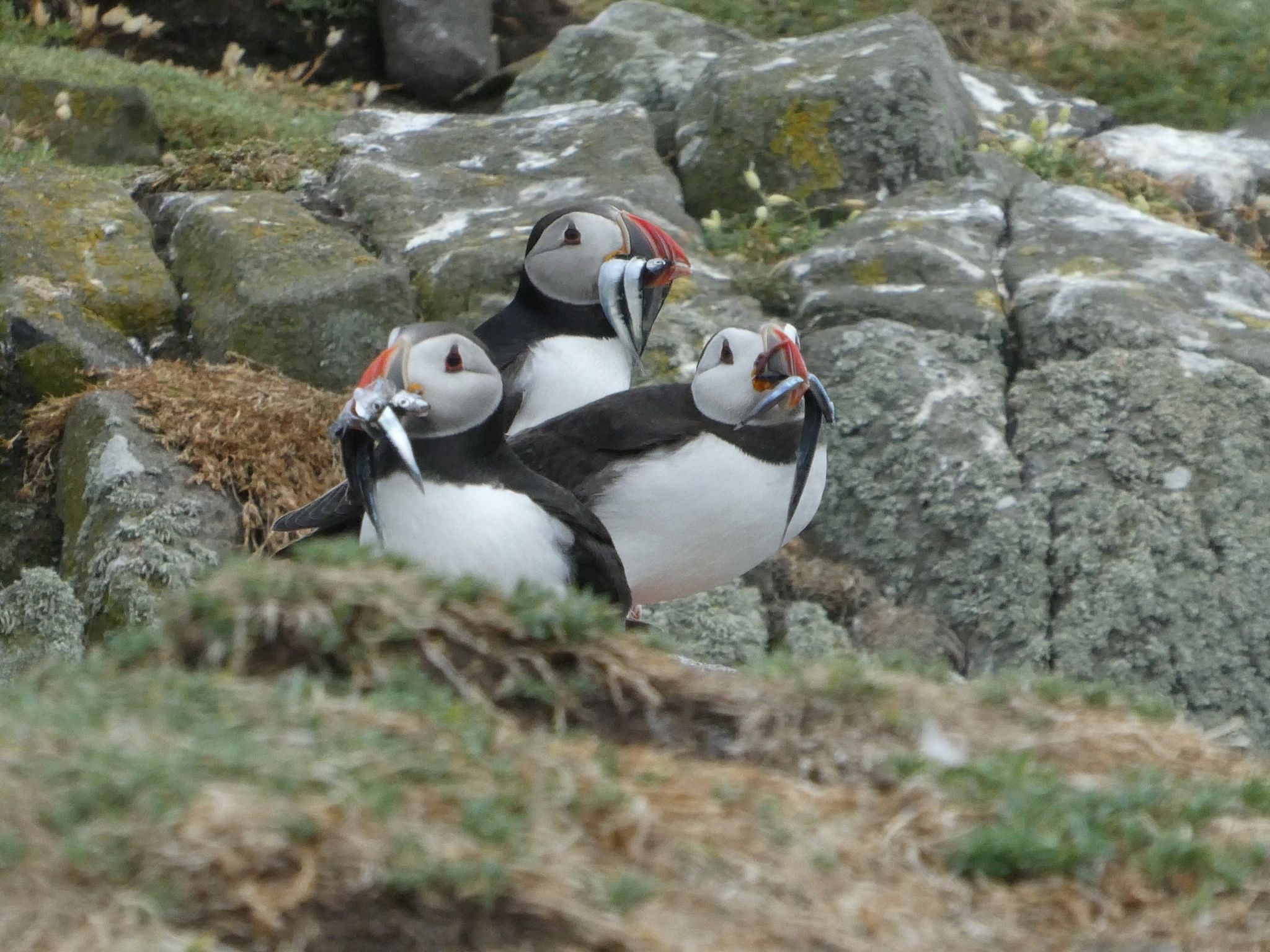 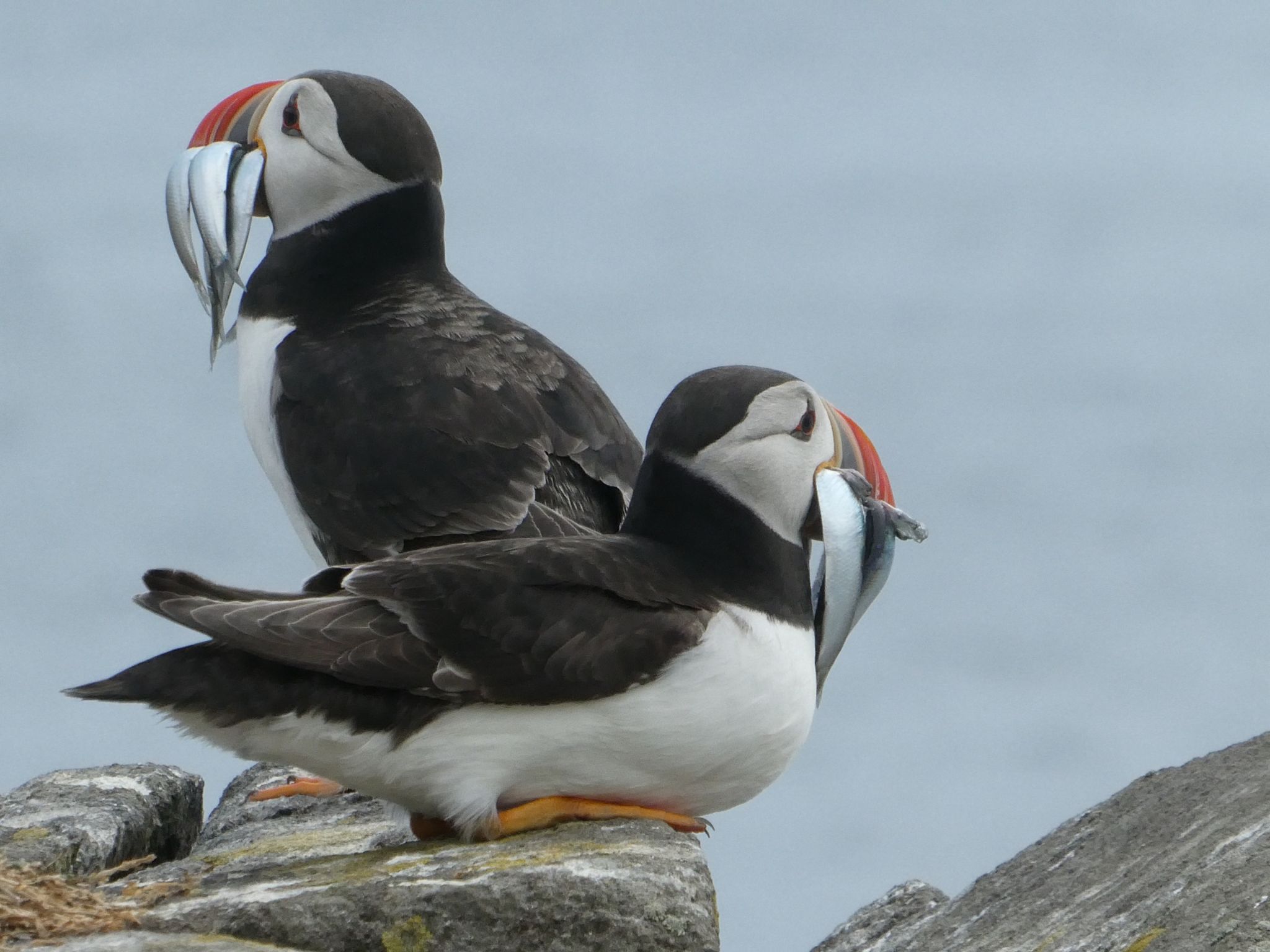 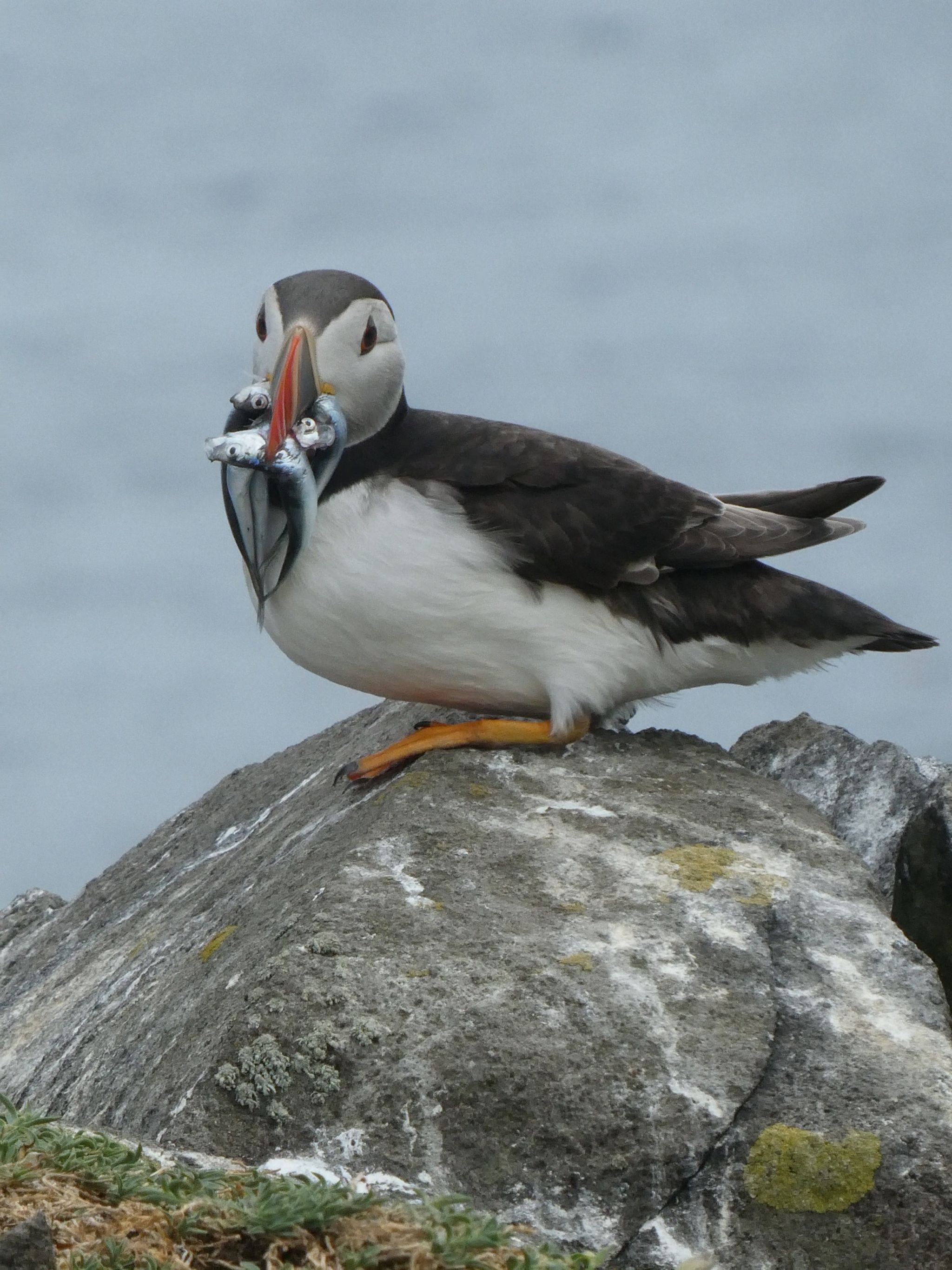 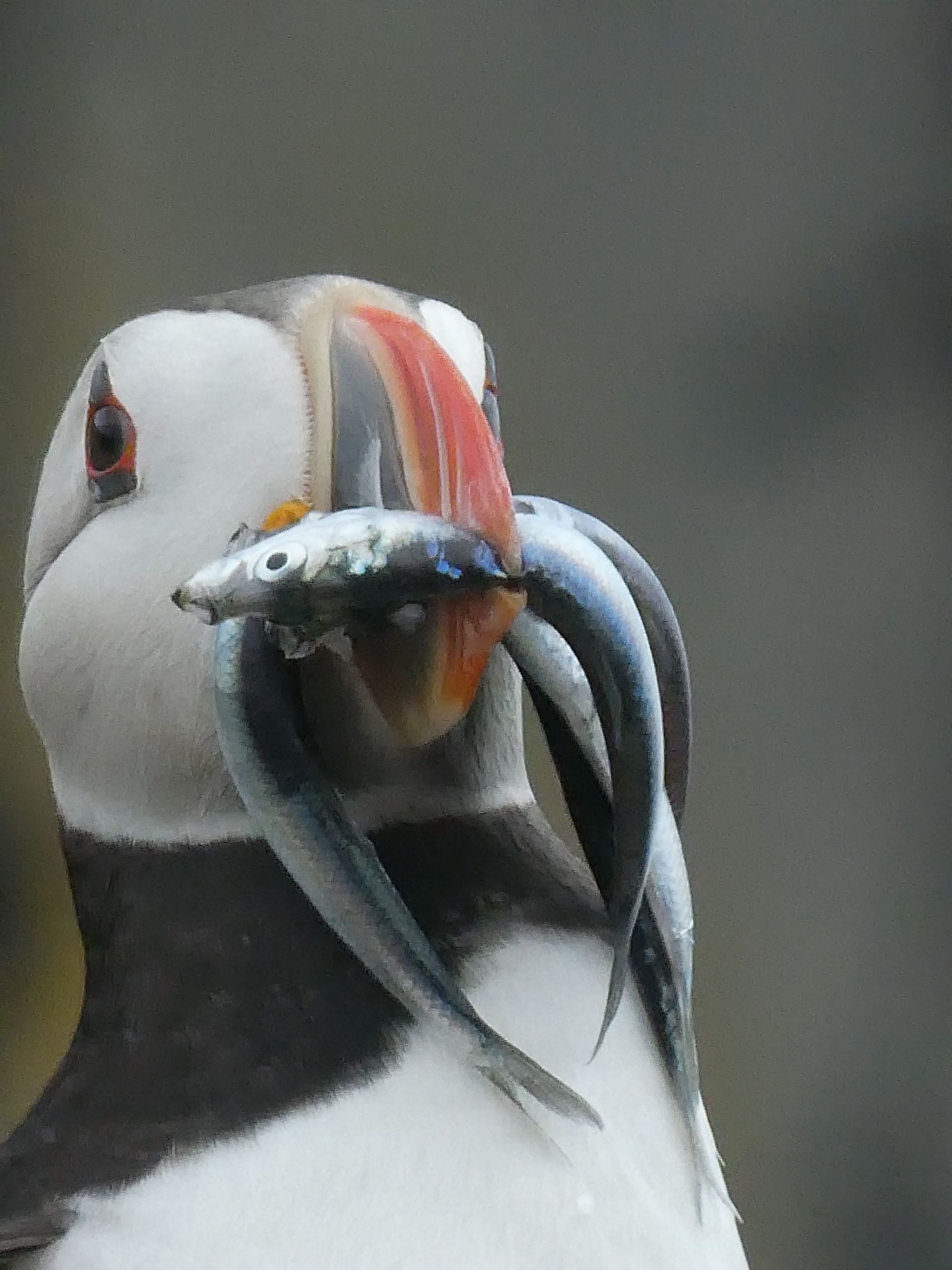 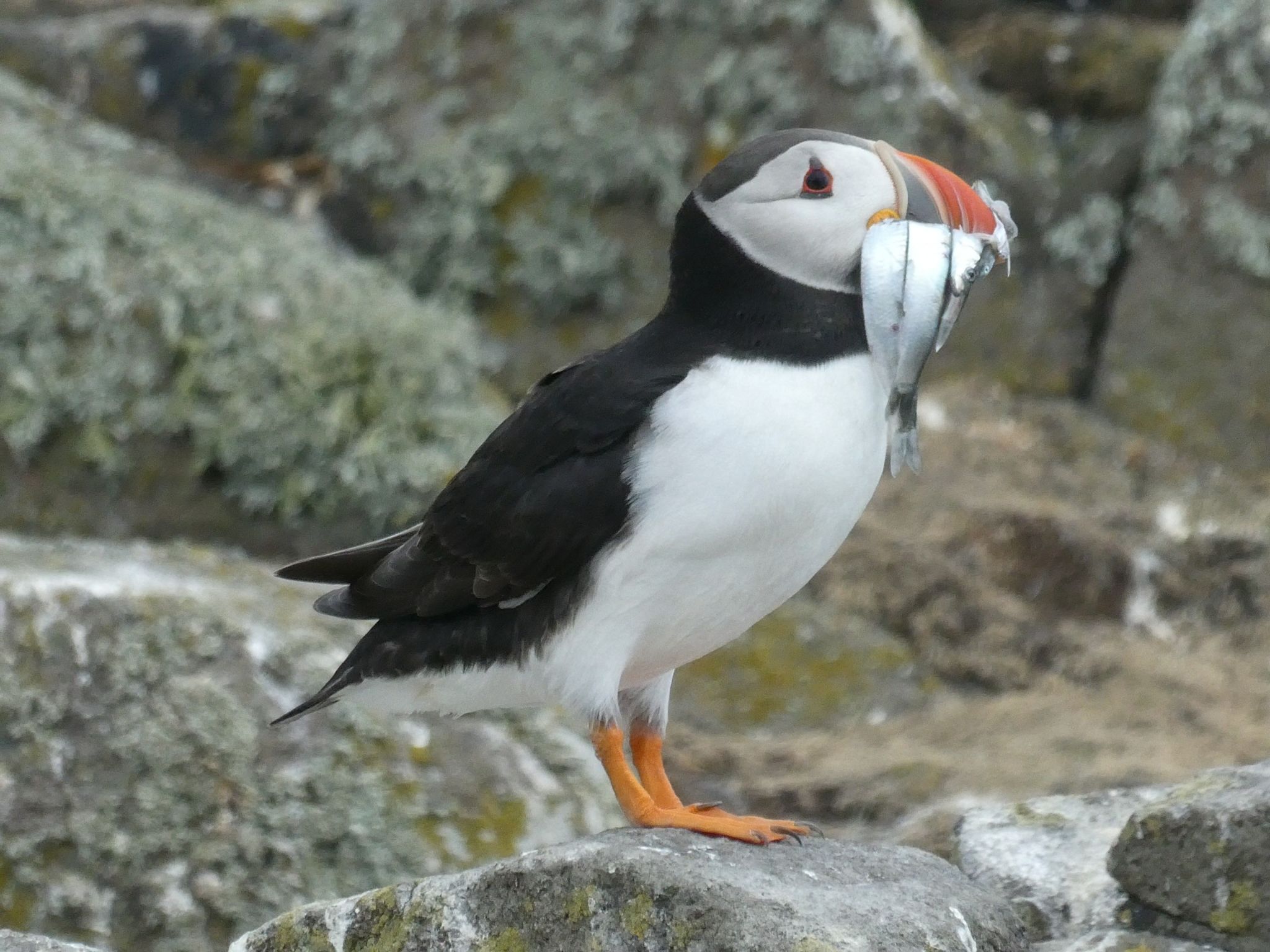 Puffins don’t nest on the ridges in the cliff.  They burrow into the earth on the grass tops of the cliff.  To re-enter their nest, they wait and wait, and then take off, do a circuit or two, and fly full tilt into their burrow.  It was fascinating to watch.  A few got sick of waiting and ate their fish.  Wonder what the pufflings got for dinner!

And of course, the island doesn’t just have puffins.  As already mentioned, there are gulls, which also breed at this time of year.  These are herring gulls.  Here’s a thought, guys: leave the puffins alone and go hunt some herring! 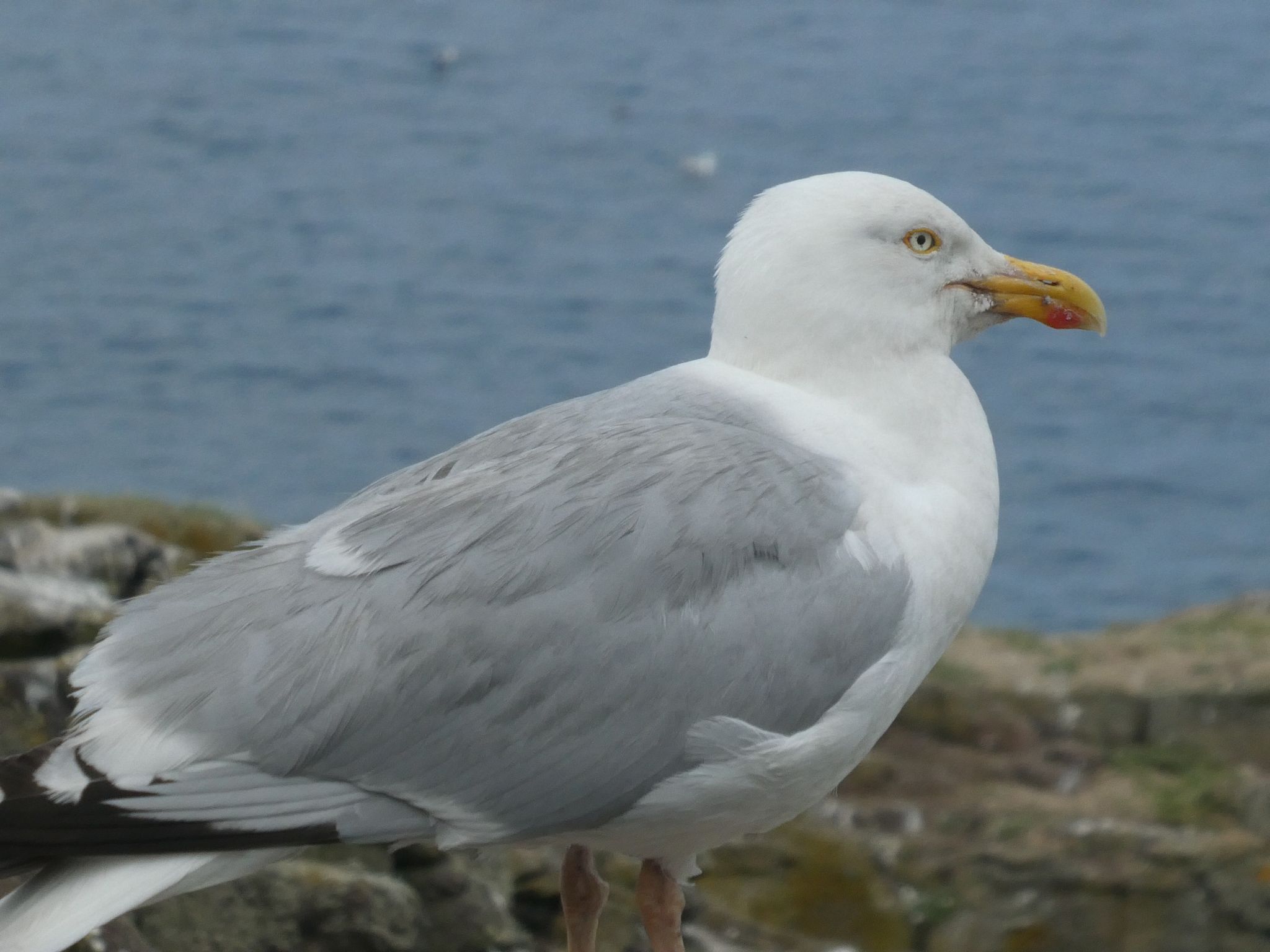 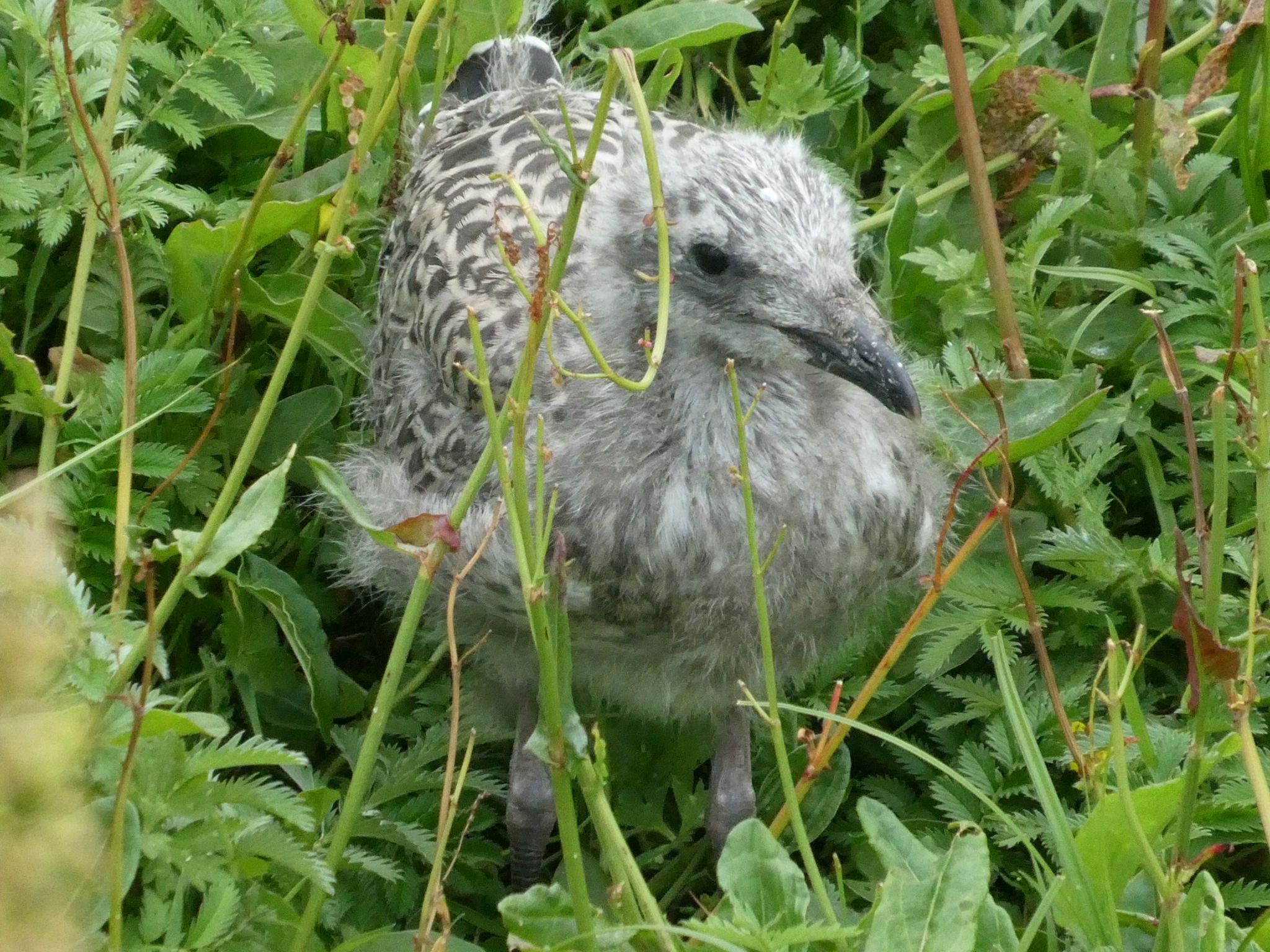 Like puffins, black guillemots are members of the Auk family.   They aren’t as famous as their cousins because, let’s face it, they just aren’t as cute.  And we won’t lie.  This photo was actually taken a couple of days later on Handa Island (see later post).  There were plenty of black guillemots on the Isle of May but Julie was too busy obsessing over the puffins to get a photo. 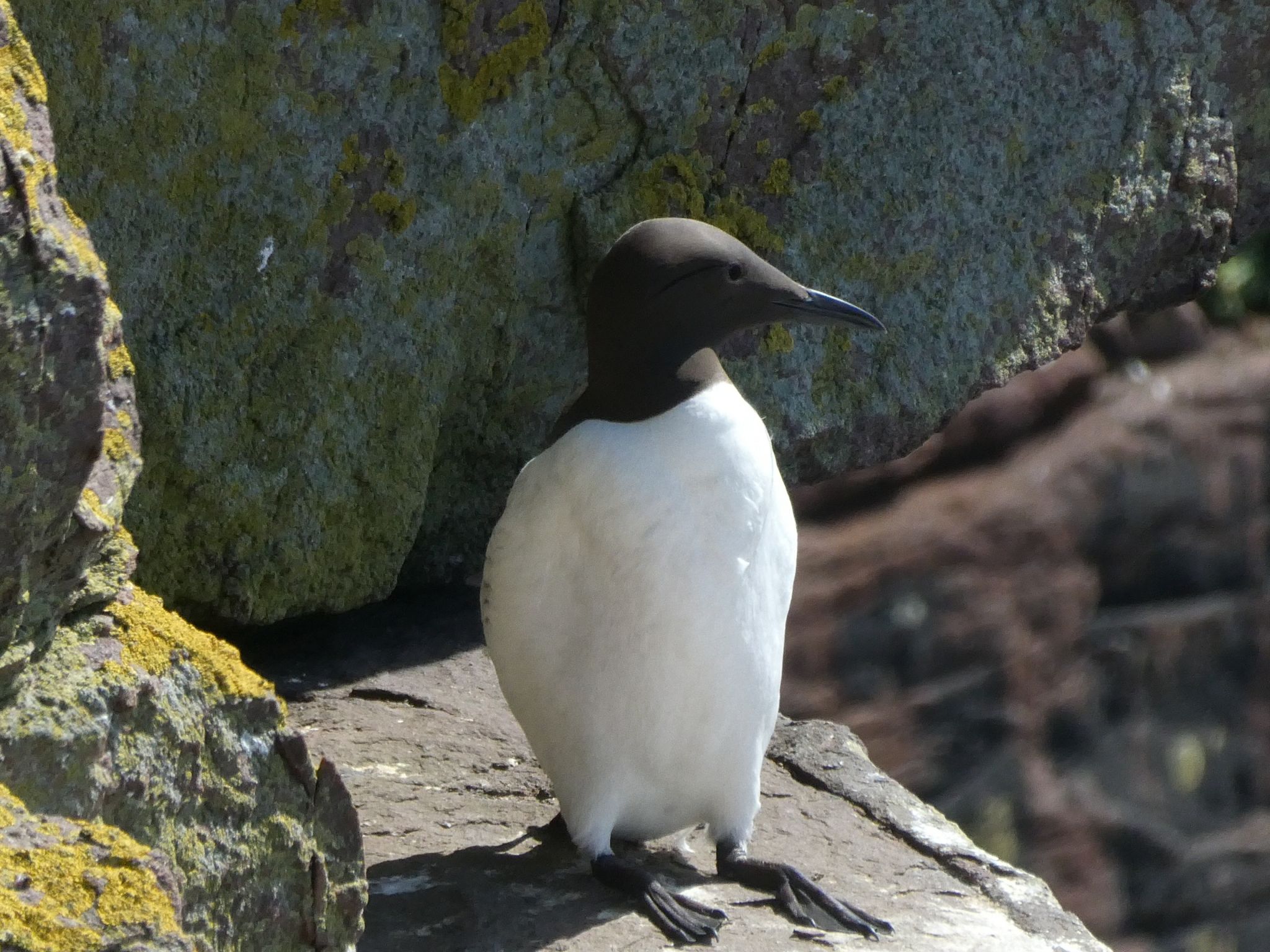 There’s also razorbills.  We thought they looked like a bird in a superhero mask. 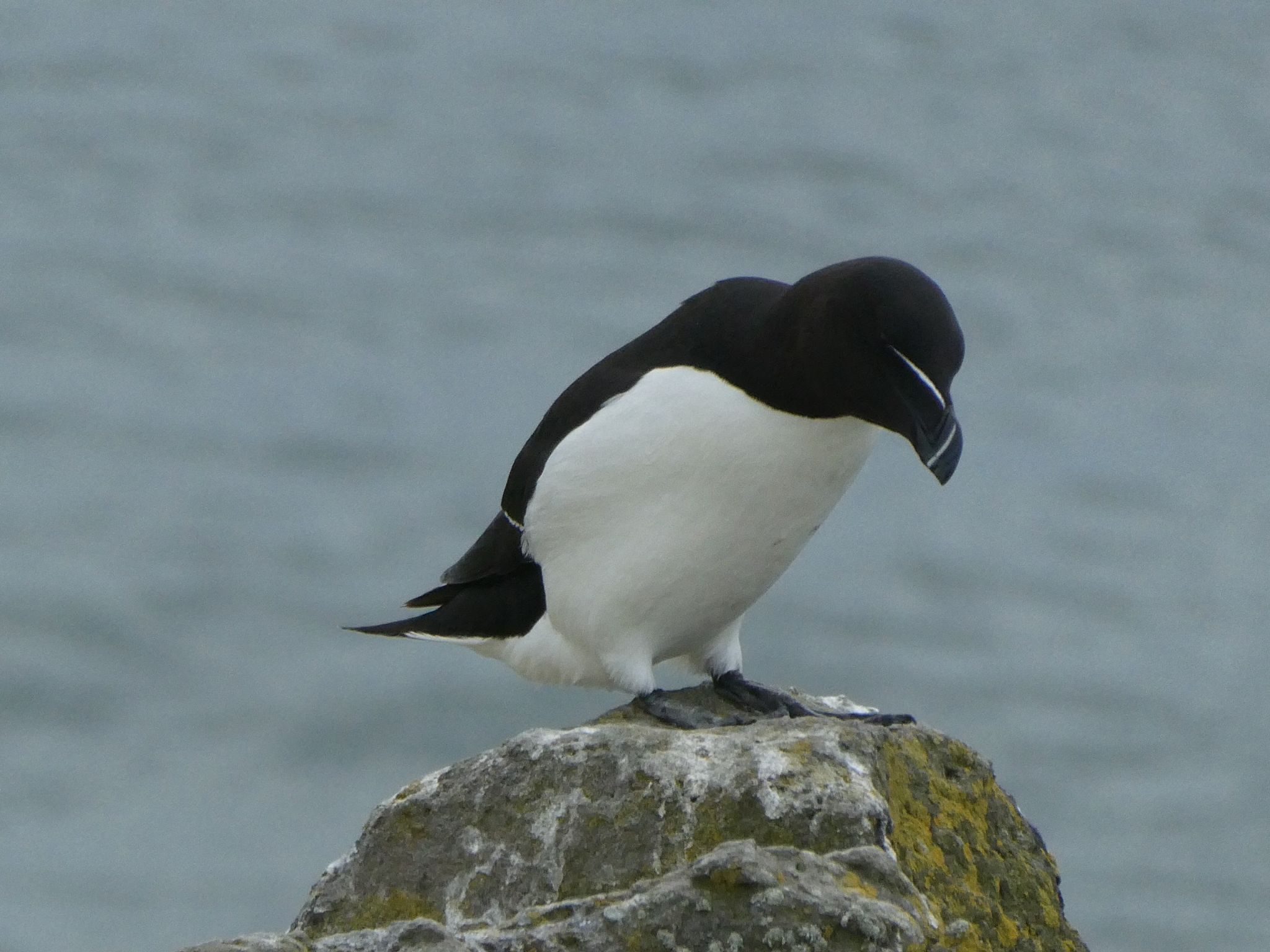 We spotted an oystercatcher. 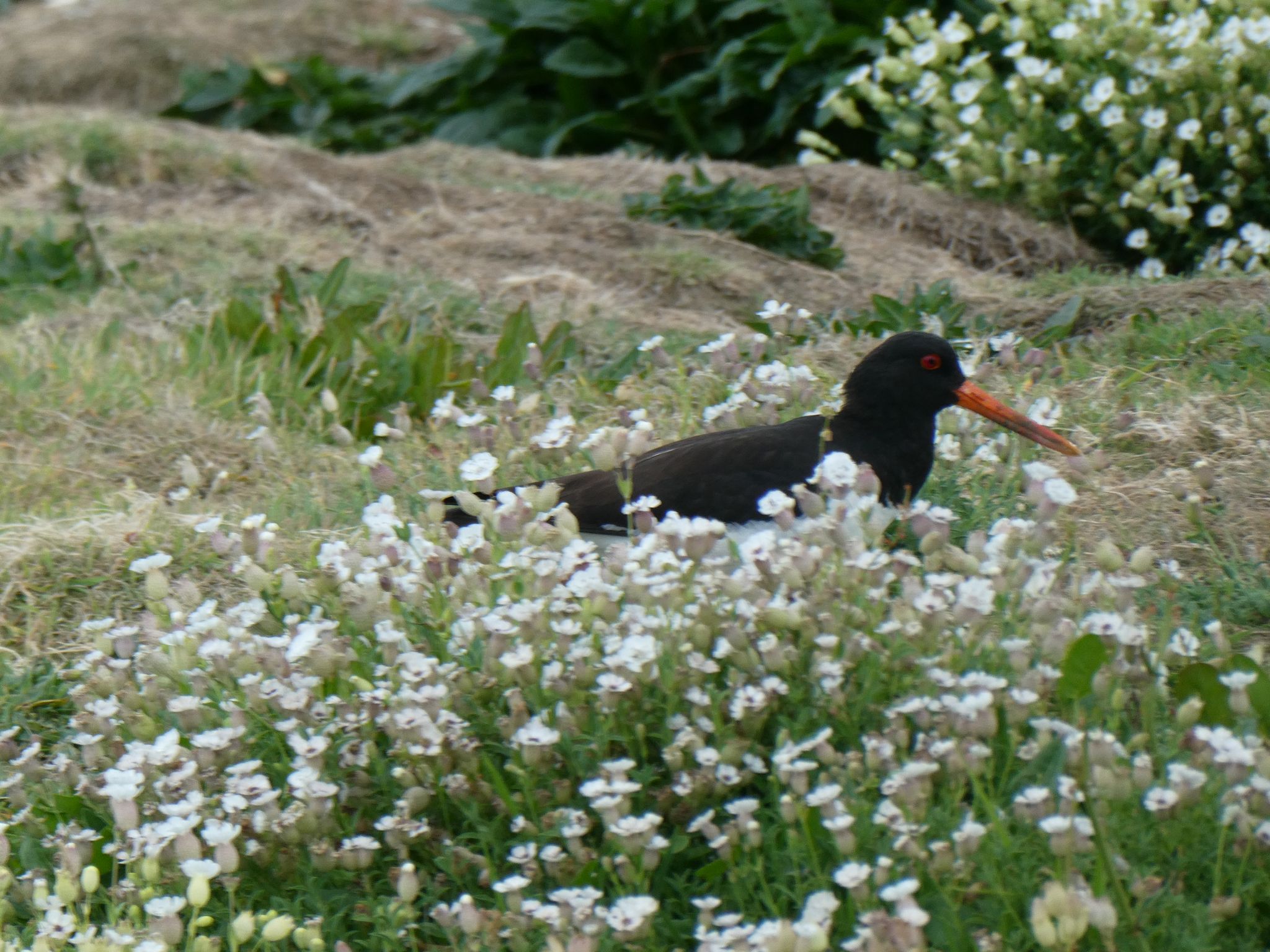 There’s lots of rabbits.  The puffins often use abandoned rabbit burrows for their nests, so its a synergistic relationship. 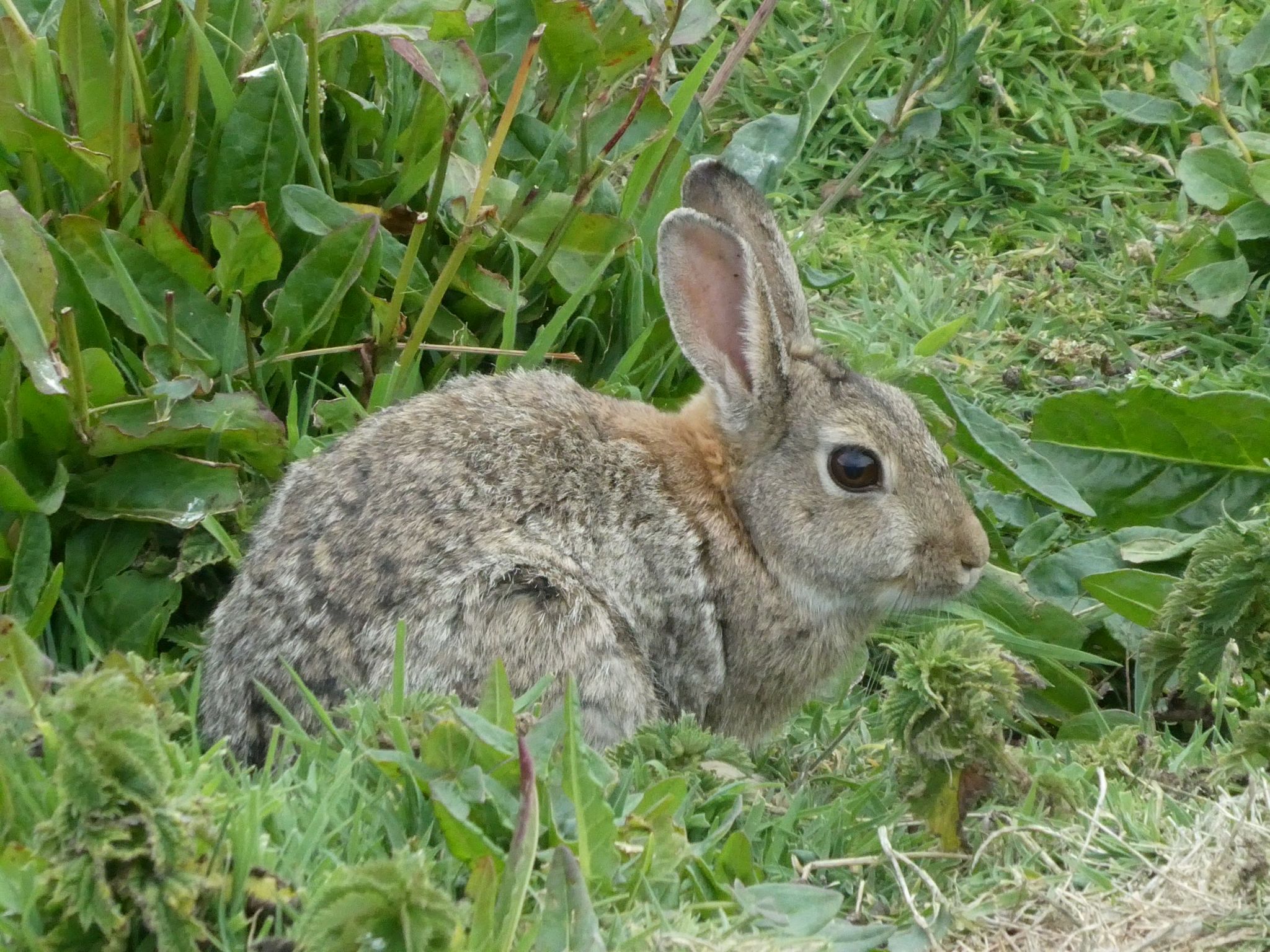 There’s a bit of history to the island as well.

The first permanently manned lighthouse in Scotland was built here in 1635.  This coal fired beacon remained in use for almost 200 years.  It was bought by the Northern Lighthouse Board in 1814, by which time it was Scotland’s last privately owned lighthouse. 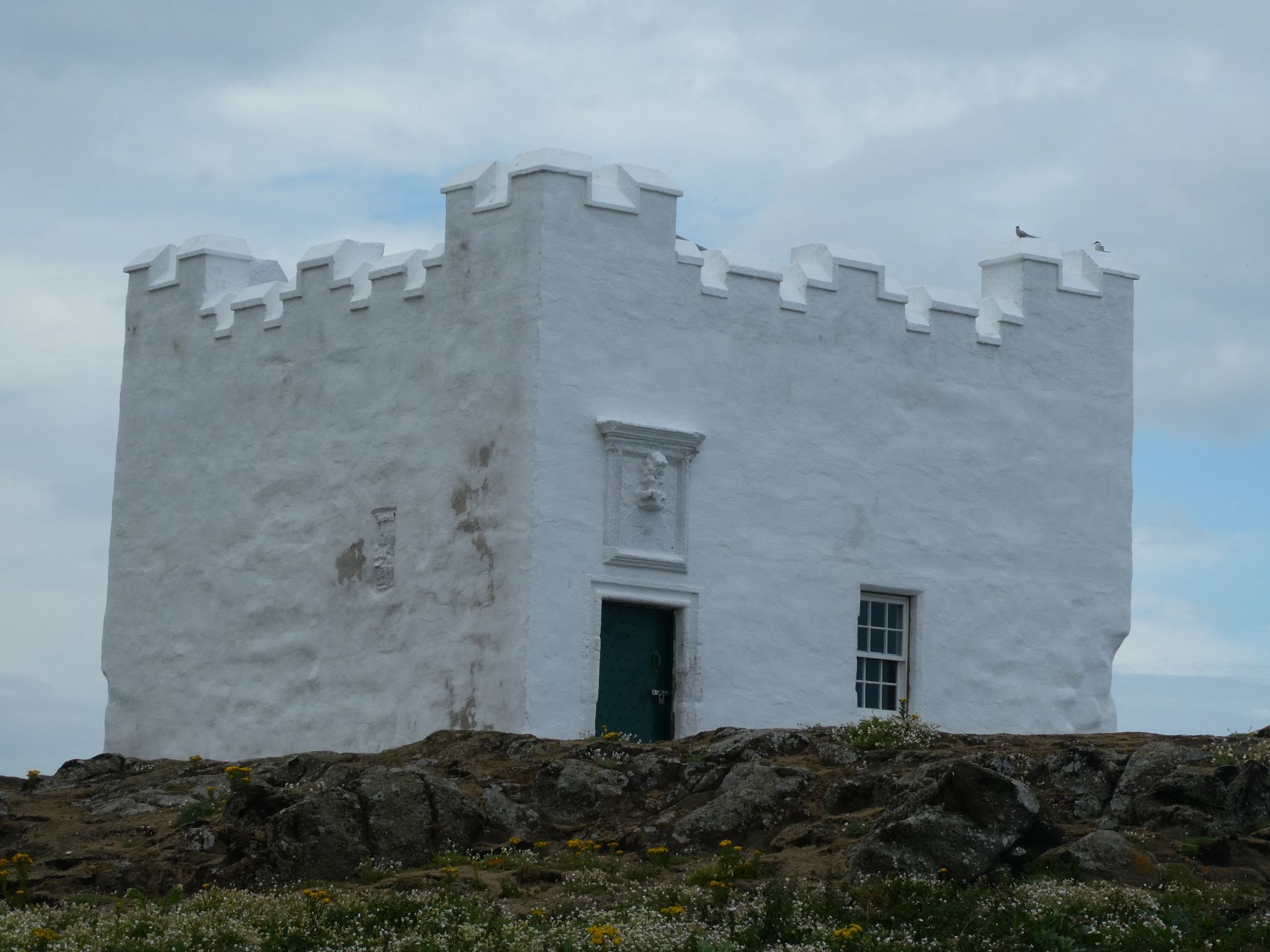 In 1816, Robert Stevenson – father of Robert Louis Stephenson, author of Robinson Crusoe – built a modern lighthouse with an ornate gothic tower resembling a castle, big enough to house three lighthouse keepers and their families.  It is now a listed building.  The lighthouse is still operational but no keepers are required these days as upgrades in technology mean the light is operated by UHF radio link from the mainland. 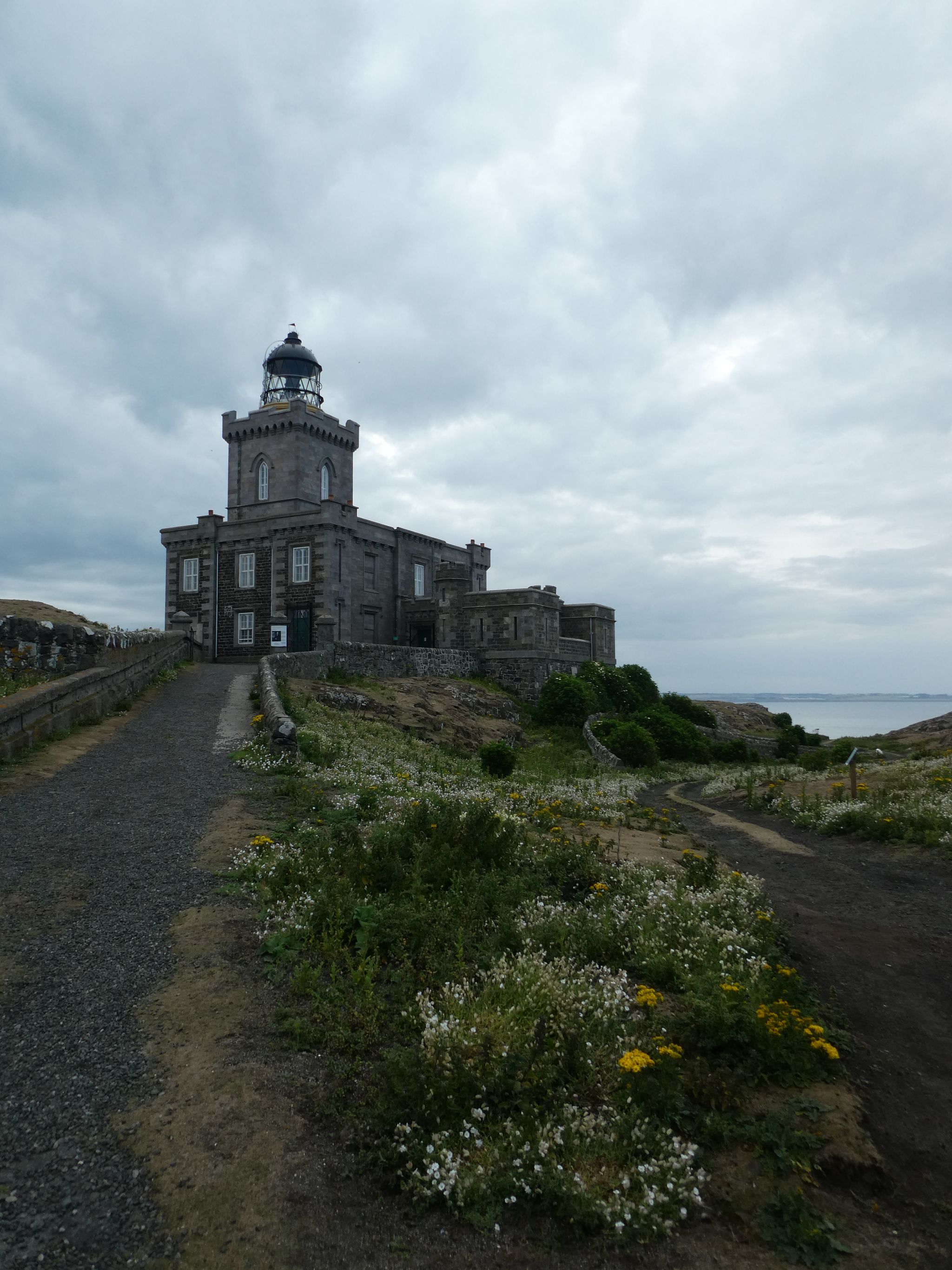 And on the return boat trip we did a circuit around Bass Rock where a zillion gannets breed at this time every year. 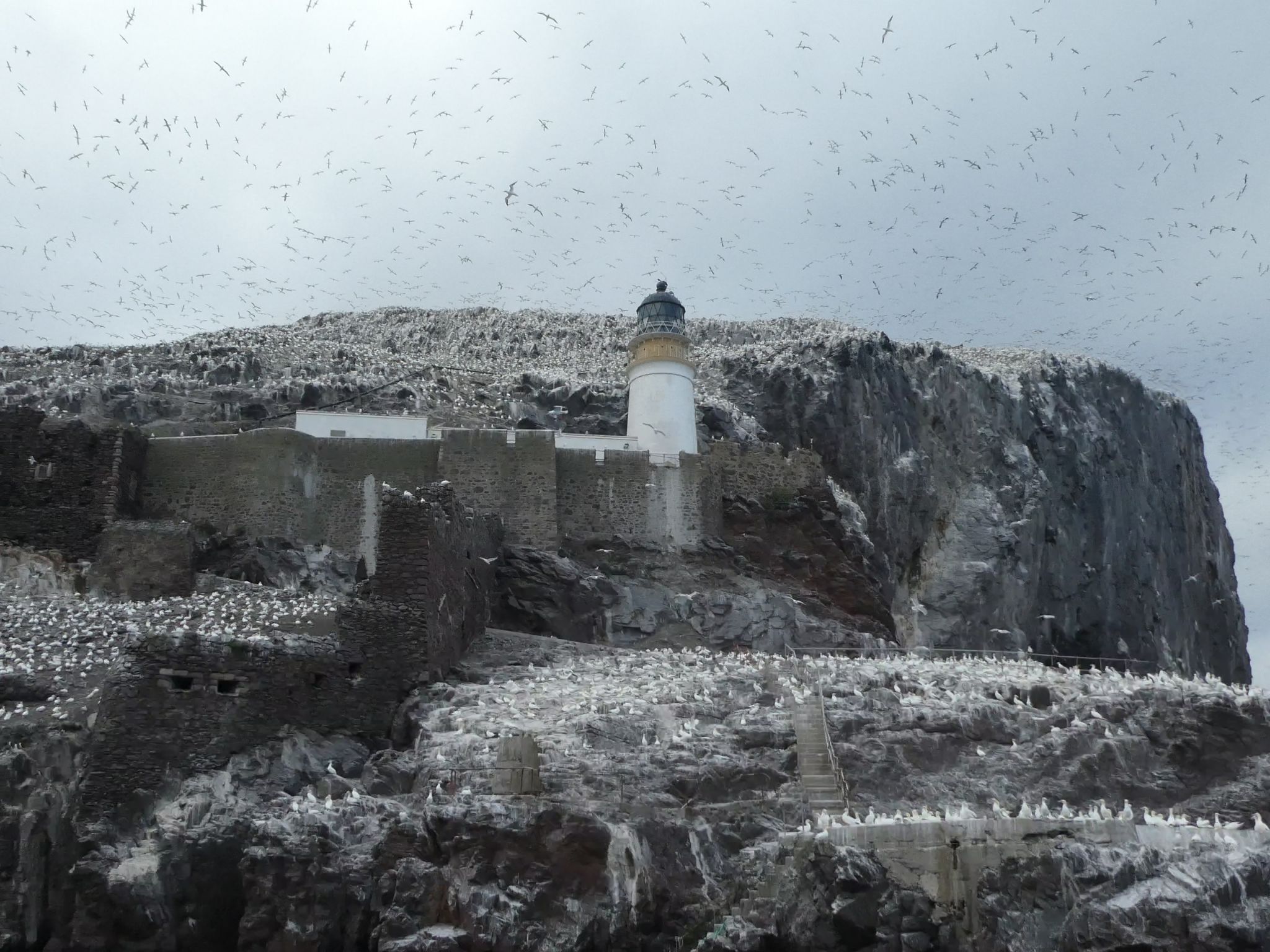 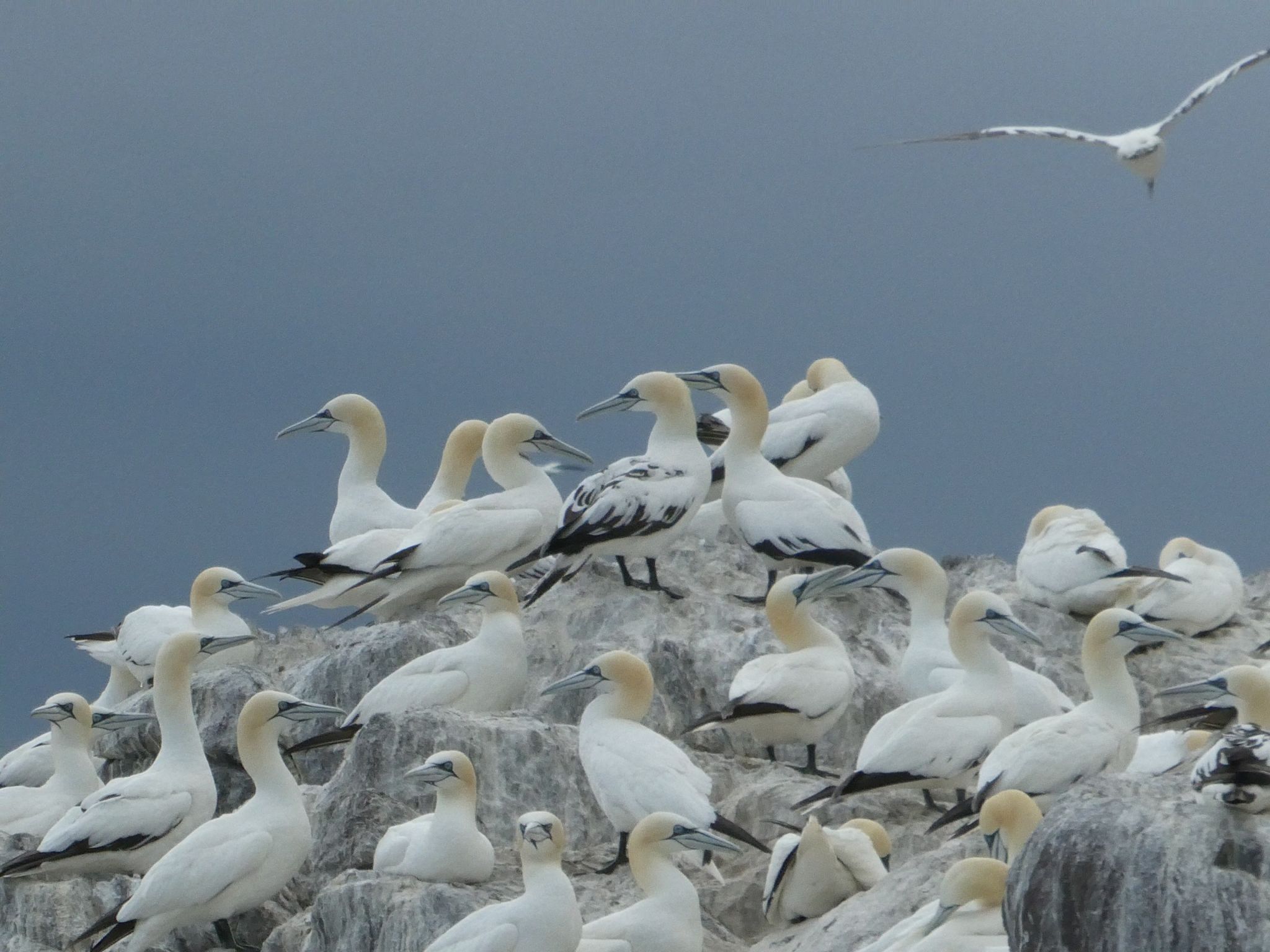 This was a fabulous afternoon out.  For getting up close to a large puffin colony, with very few other people around, we highly recommend the Scottish Seabird Centre trip.  Just be sure to book well ahead.