Reims is the unofficial ‘capital’ of the Champagne district.  Many of the larger champagne houses have their headquarters here, including Taittinger, Mumm, Vranken-Pommery, Verve Cliquot, Lanson and Ruinart.

We thought we’d do just one visit to a champagne house and a bit of research suggested the best in show is Ruinart.  We were very pleased with our choice.

In 1729, Nicholas Ruinart drafted the founding charter of Maison Ruinart, thus creating the first champagne-producing company in the world.  The company has remained in the same family, at the same site, ever since.

Visits to Ruinart are small group, by appointment only, and include a look at the house and grounds, and a tour of the cellars.

The original Maison is beautiful and all Ruinart champagne is still made on this site. 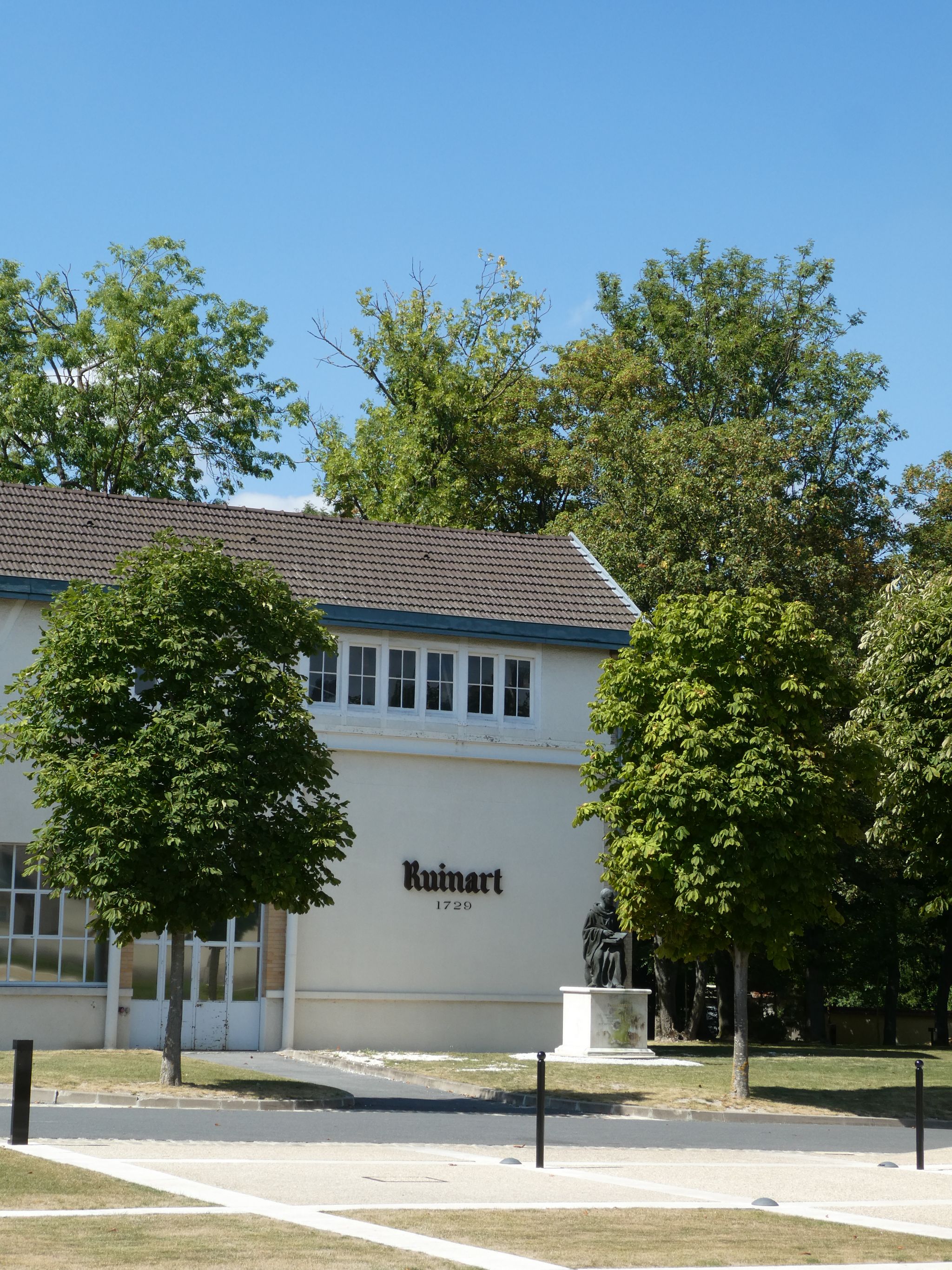 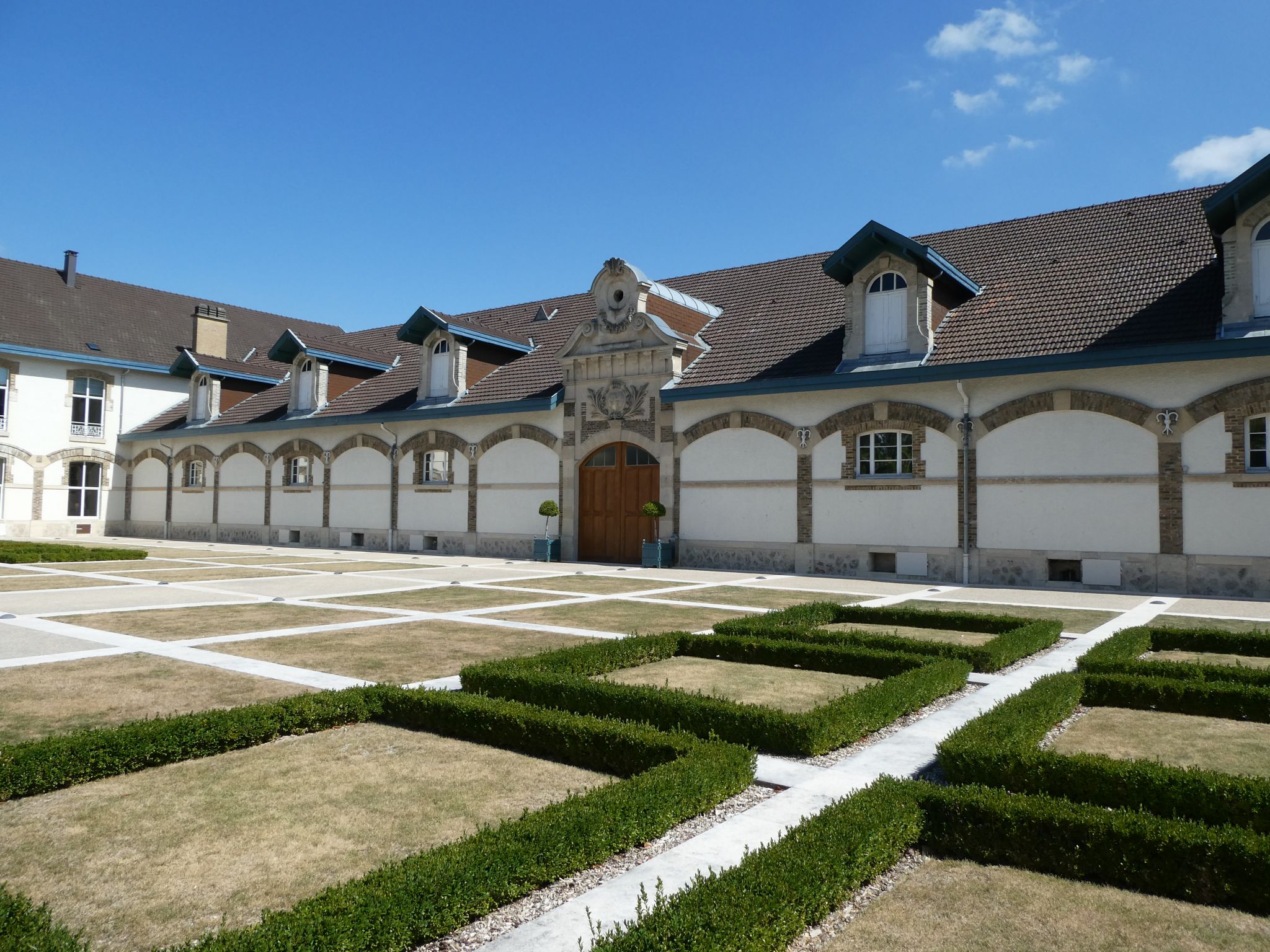 There’s some Ruinart-inspired art inside the reception area.  This one reminded us of a few of our more exuberant dinner parties back home. 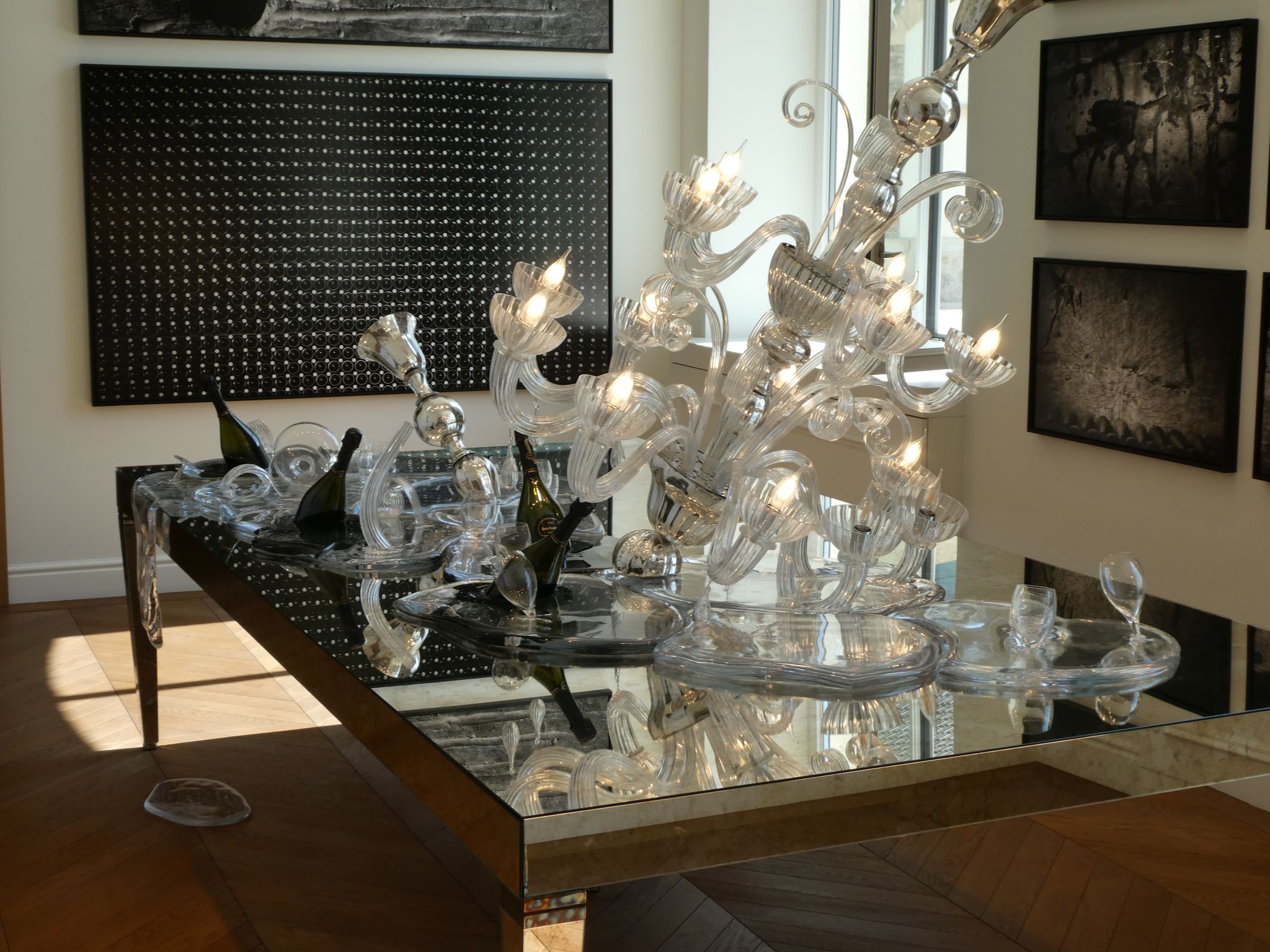 Champagne is cellared in ancient crayeres (underground caverns created by chalk mining), which are quite literally under the city of Reims.  They are seminal to successful production because of the perfect and totally consistent temperature down there.   The tour includes a visit to the crayeres.  Look at all that champagne quietly resting! 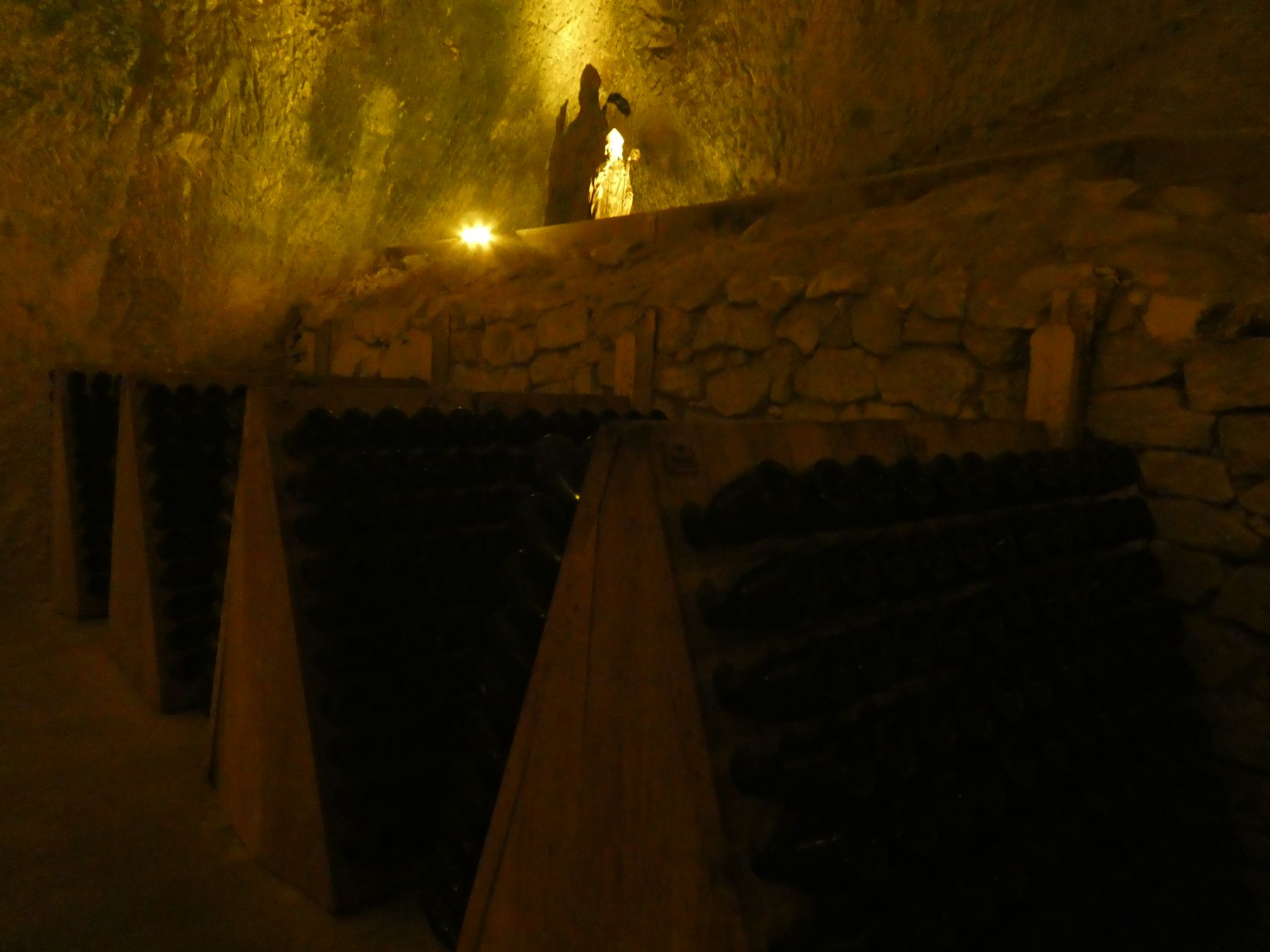 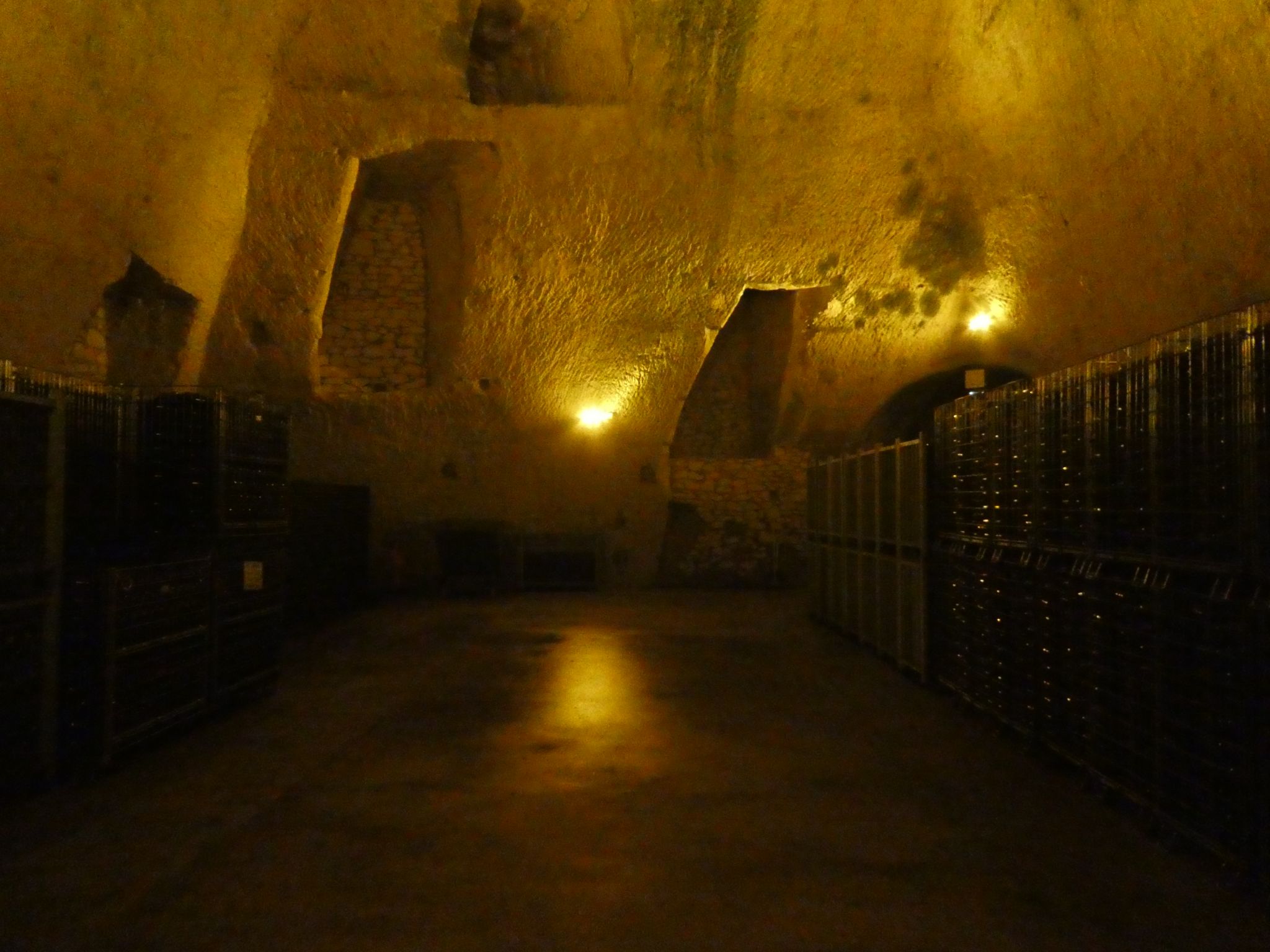 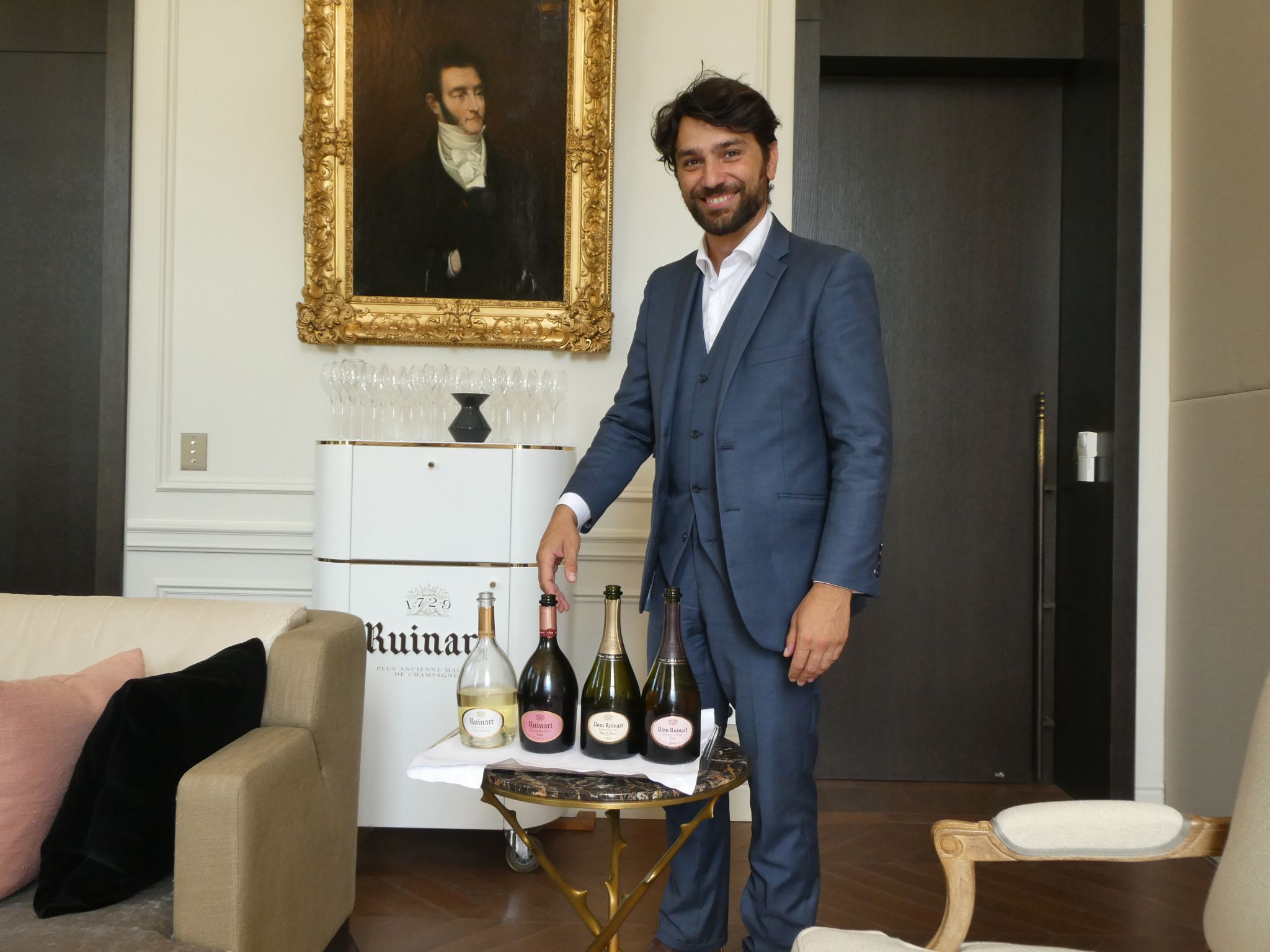 We shared a taxi back to town with another Australian couple and we all went on to a degustation tasting bar and on to dinner.  It was a great Champagne day! 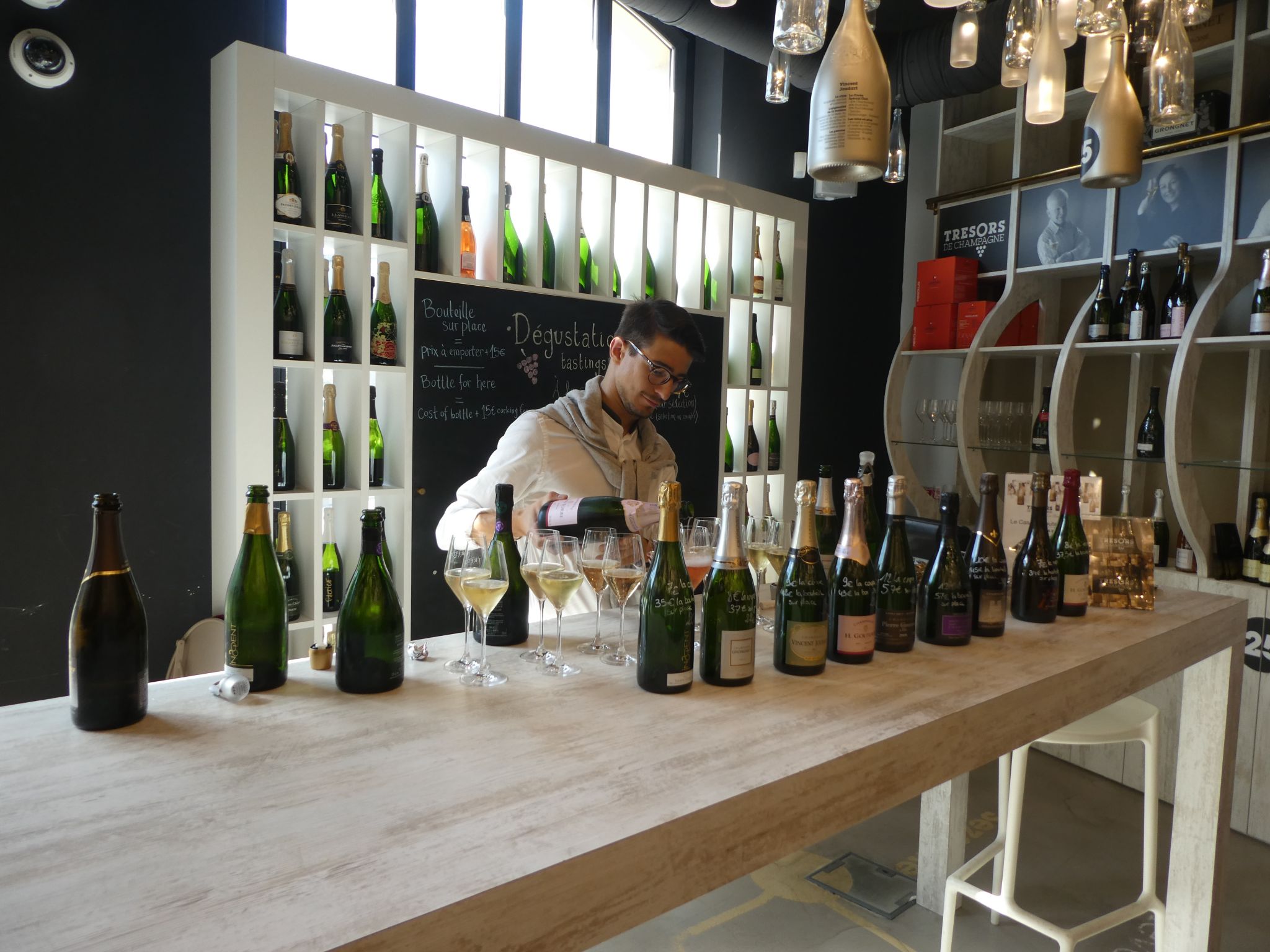 Reims isn’t only about champagne, though.

It was in Reims that Saint Remi, Bishop of Reims, baptised Clovis I, King of the Franks, on Christmas Day, 499CE.  Clovis I was the first to unite all of the Frankish tribes under one ruler and to establish the hereditary right of kingly succession in France.

The church at Reims became extremely important, as from Clovis I until the end of the monarchy in France, every King of France was crowned here.

The original church was destroyed by fire in 1211 and the current Our Lady of Reims Cathedral was built in its place. The cathedral was badly damaged and the interior gutted by fire following artillary shelling in WWI.  It reopened in 1938 following major restoration, made possible in part by financial contributions from the Rockefeller family.  Fortunately, the cathedral was largely spared from damage during WWII.

It is a truly magnificent building, befitting a king’s coronation. 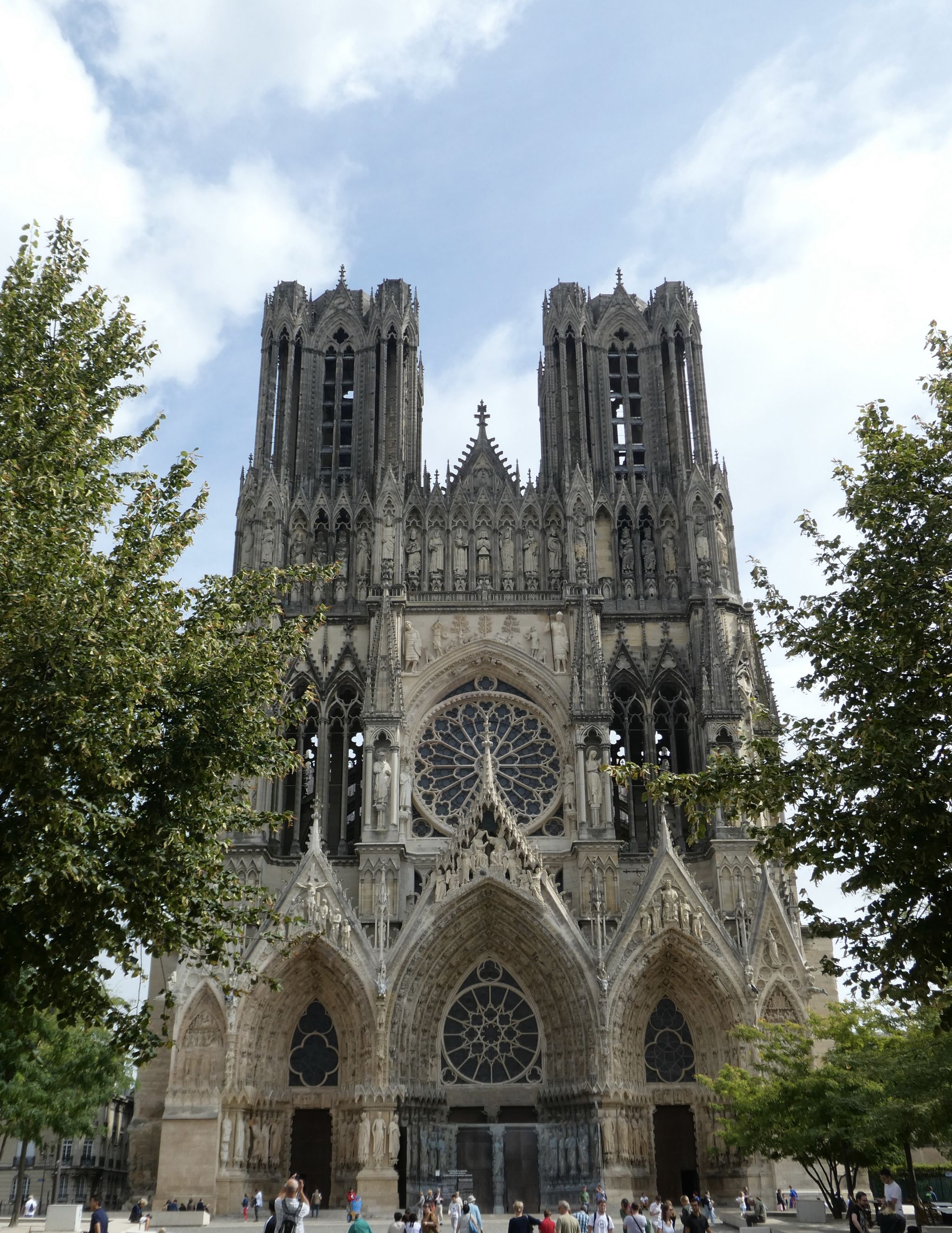 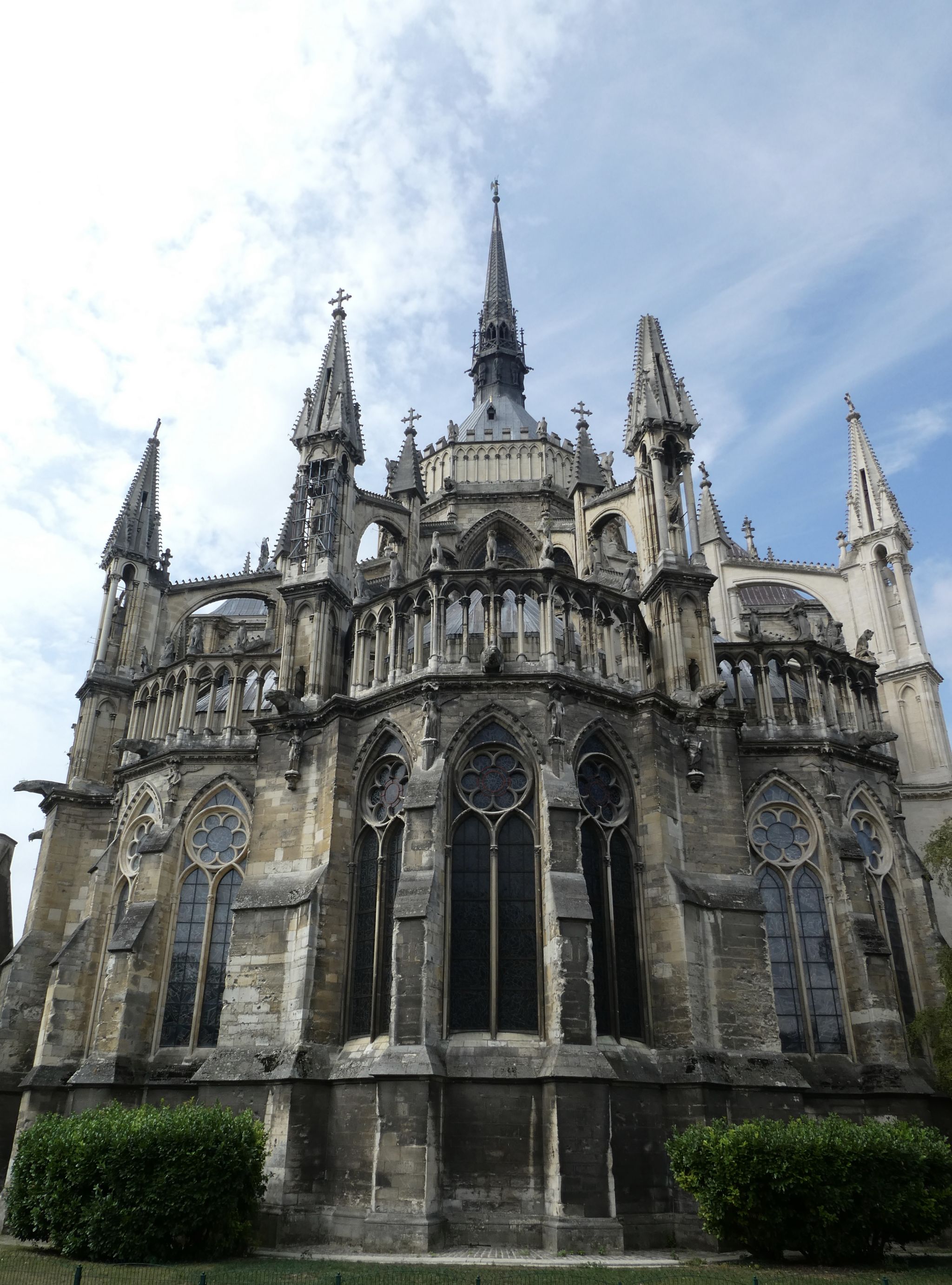 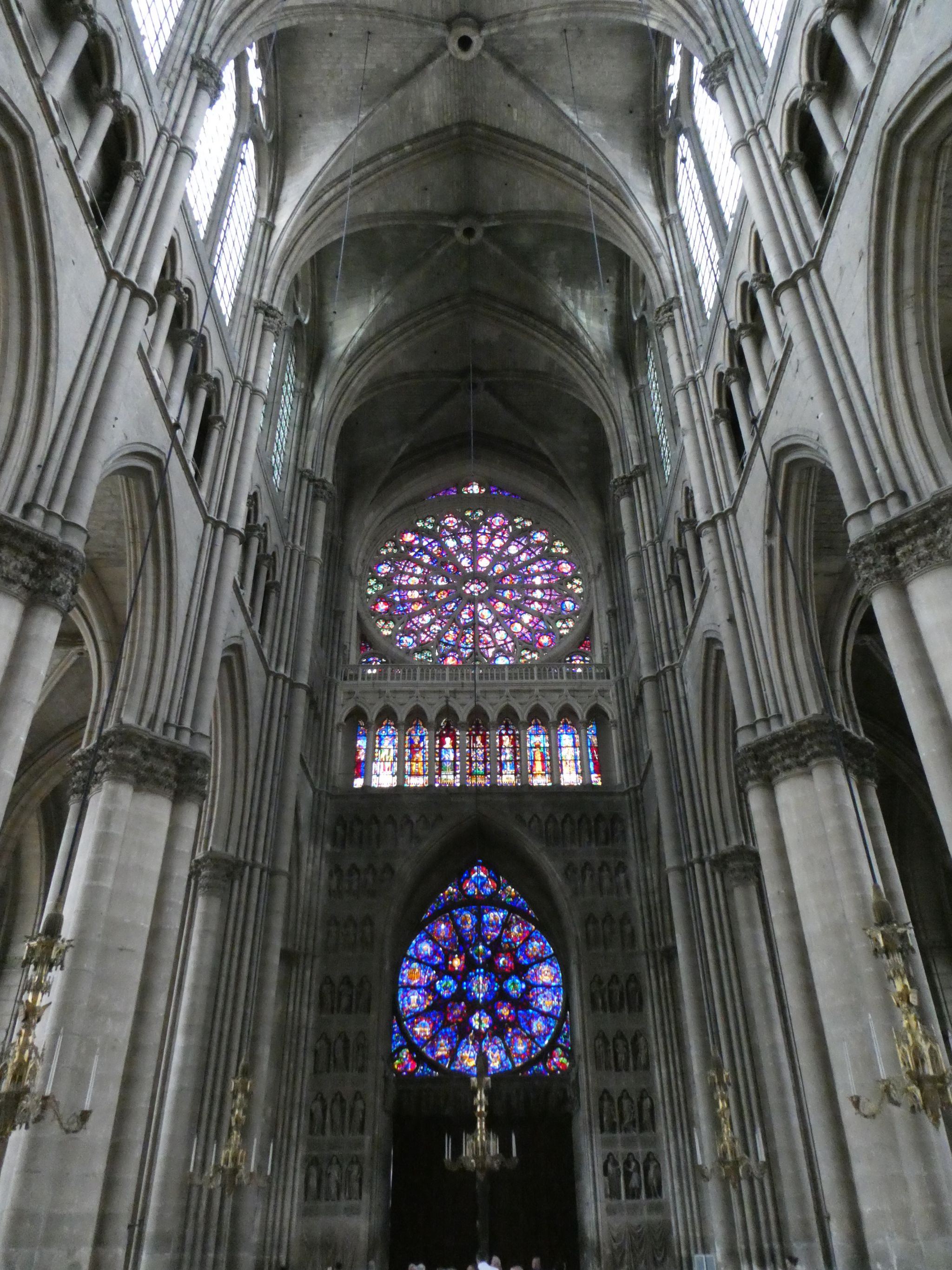 Saint Remi himself is interred across town in a tomb in the Basilica of Saint Remi, also very beautiful. 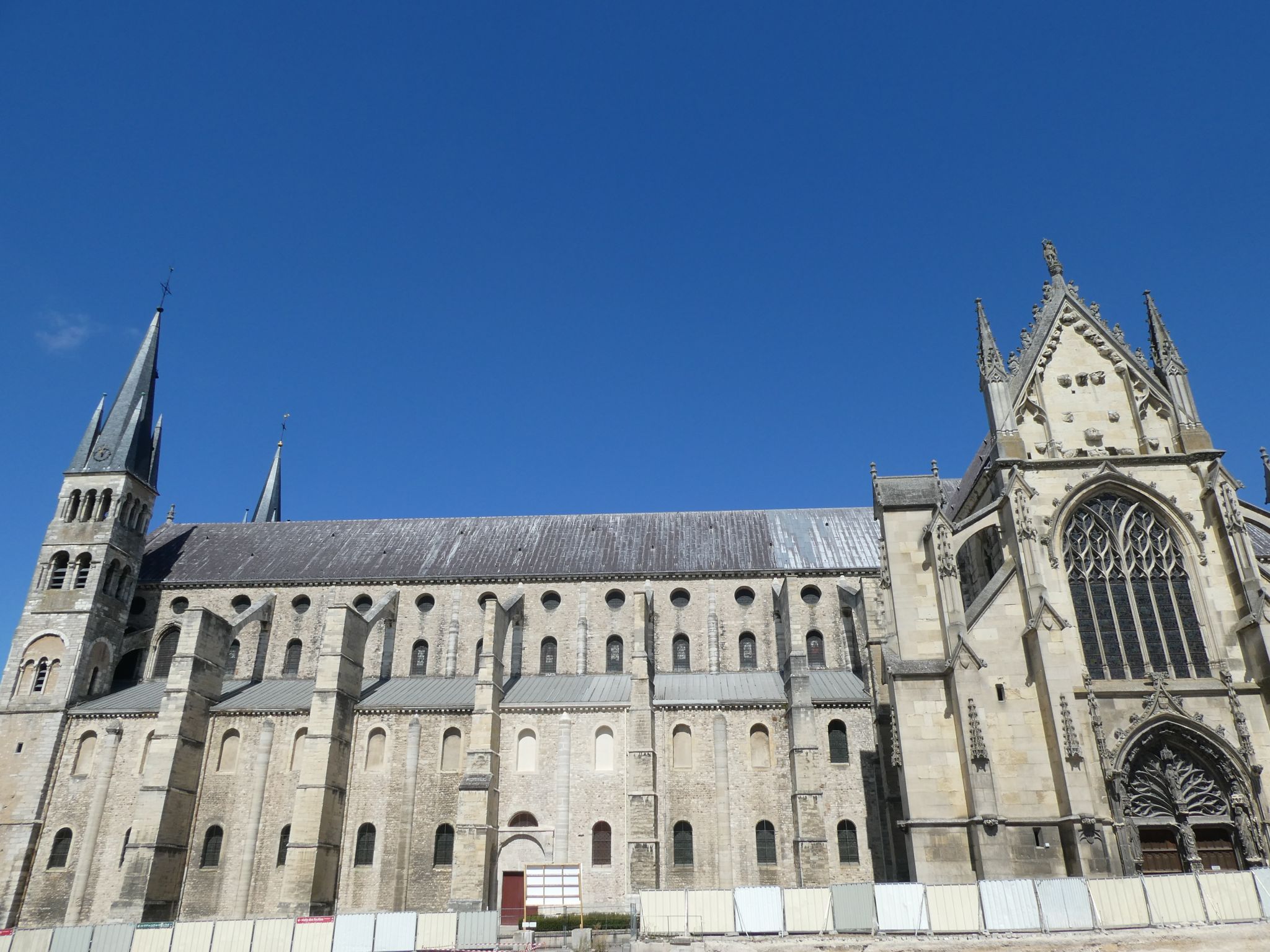 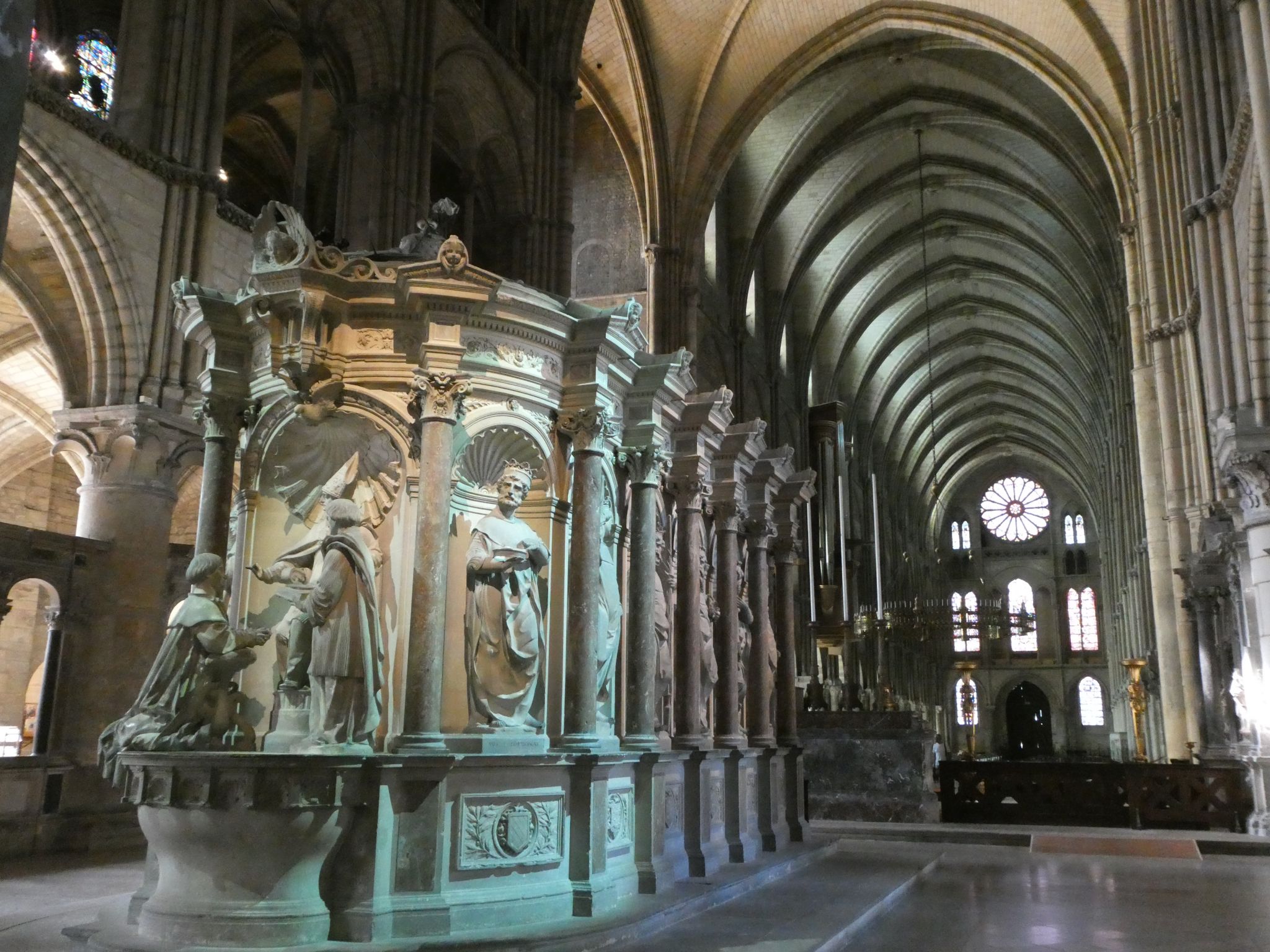 Reims is also home to the Reims Automobile Museum, the fifth largest motor vehicle collection in France with approximately 230 cars dating from 1908 onwards. 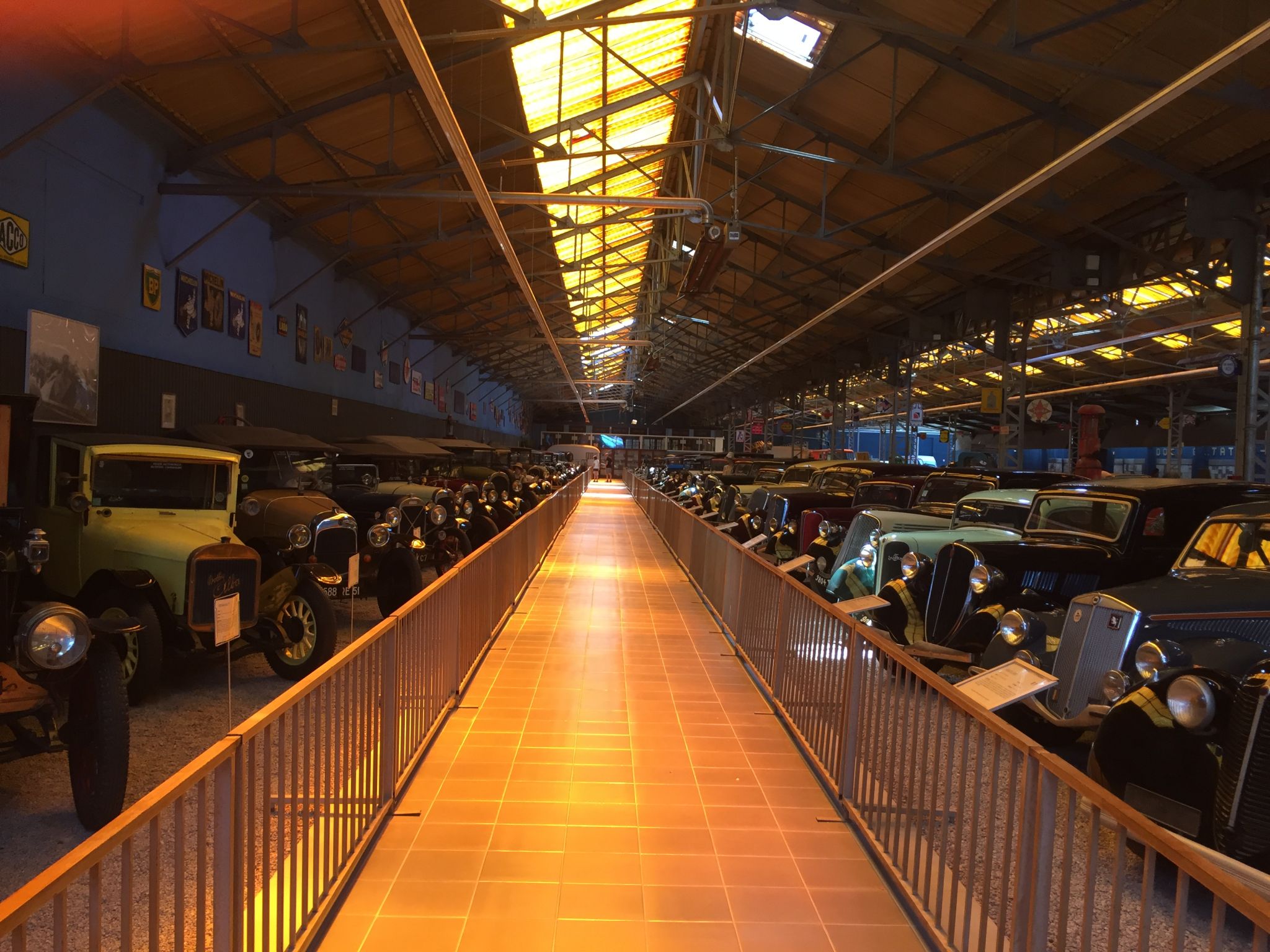 Although Reims was decimated in WWI, the conflict in WWII largely bypassed it.  However, late in the war, as the Allied forces advanced across Western Europe, General Eisenhower moved his headquarters from Paris to Reims.  The Supreme Headquarters of the Allied Expeditionary Force set up in a school near the train station.

In the War Room of those headquarters, at 2.41am on 7 May 1945, the Second World War in Europe ended when Admiral Karl Donetz, German head of state following Hitler’s suicide a week earlier, signed an unconditional surrender in relation to all hostilities in Europe.

In a fit of pique that the signing had not taken place on soil liberated by Russia, Stalin insisted on a second signing two days later in Berlin.  But here in Reims is where it really all ended.

The school is still a school, but the area used by Eisenhower’s team has been preserved, the War Room untouched since they left.  The site has been a museum since 2005 and a small theatre has a really informative documentary in English explaining the events. 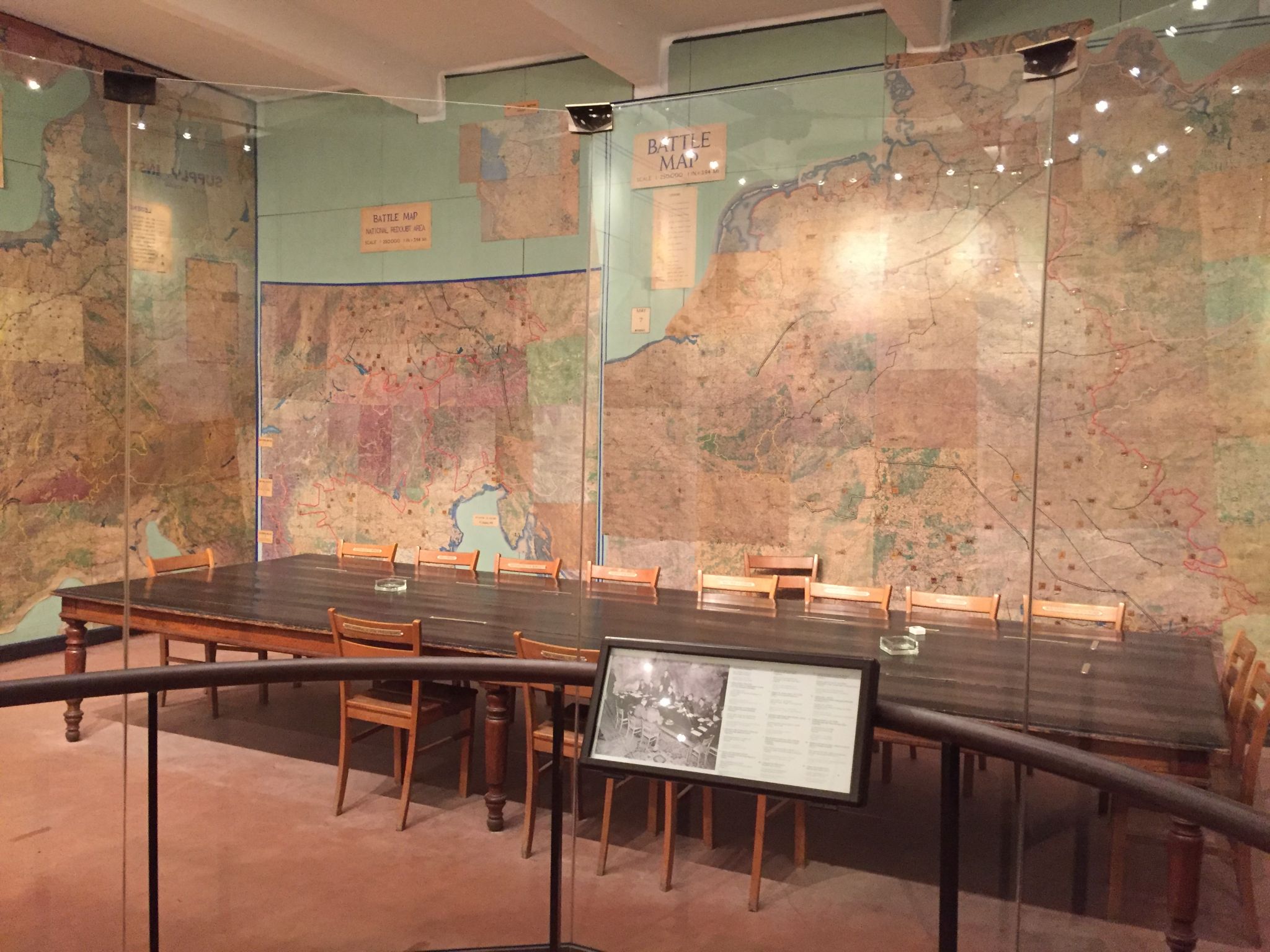 And if that’s all too much history, you can always go drink some more champagne.  As Mark Twain once said, “Too much of anything is bad, but too much champagne is just right”.

Or you could, as we did, head south to Dijon for epicurean and vinous delights of a different kind.