In 1995, the industrial port city of Bilbao received a mere 25,000 tourists.  Ten years later, the number was 600,000, and tourist numbers continue to increase year on year.  The massive increase in visitors is due almost entirely to the Guggenheim Museum.

Frank Gehry’s masterpiece, opened in 1997, is responsible for what urban planners now call ‘the Bilbao effect’: the concept that a signature building can single-handedly change the image of a city.

We’ve read that the building is supposed to evoke the image of a ship, in recognition of Bilbao’s long history as a port, and the individual titanium squares of which it is made are supposed to reference fish scales.  Personally, we think it looks like delicately unrolling sheets of aluminium foil.

Either way, it is a magnificent building indeed. 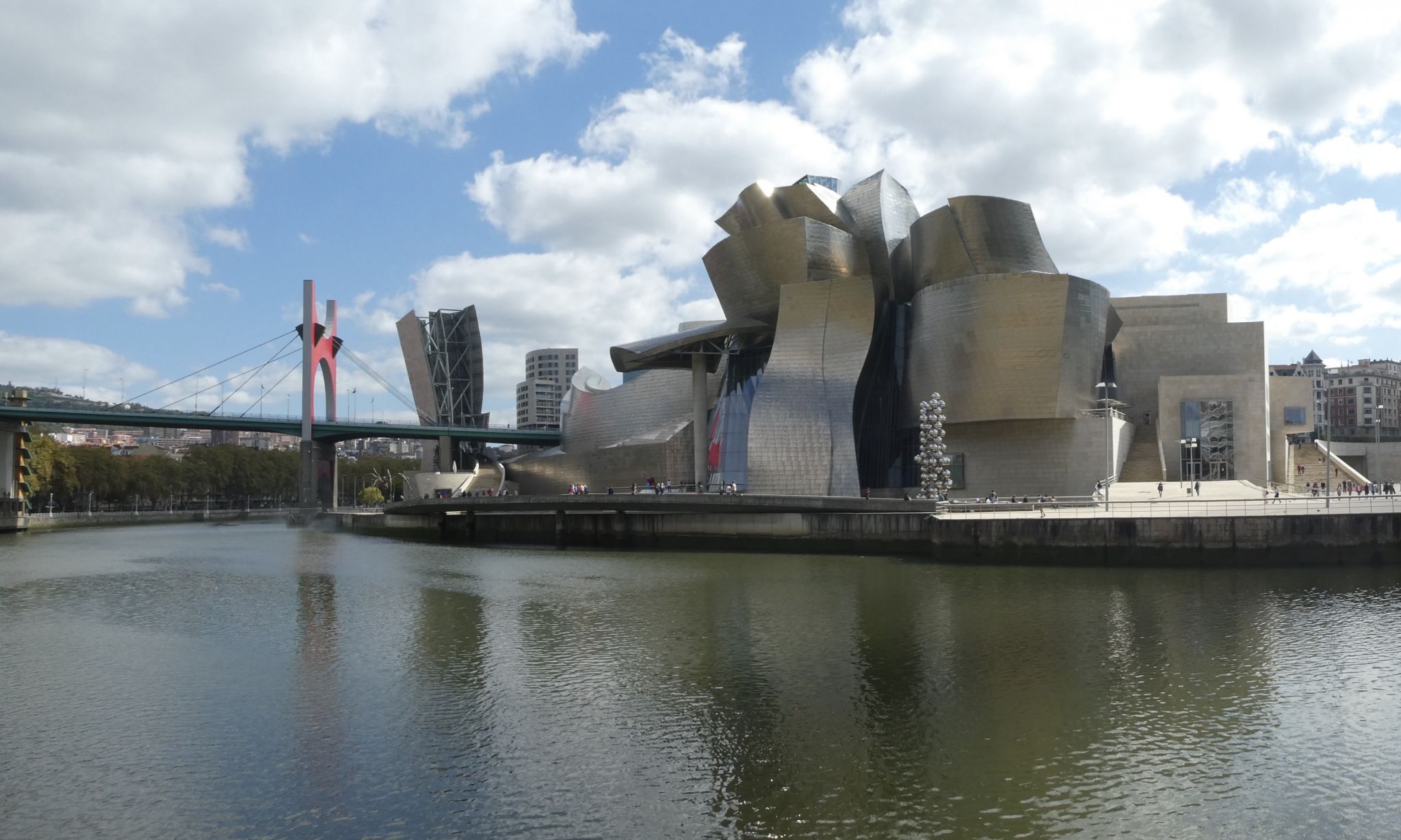 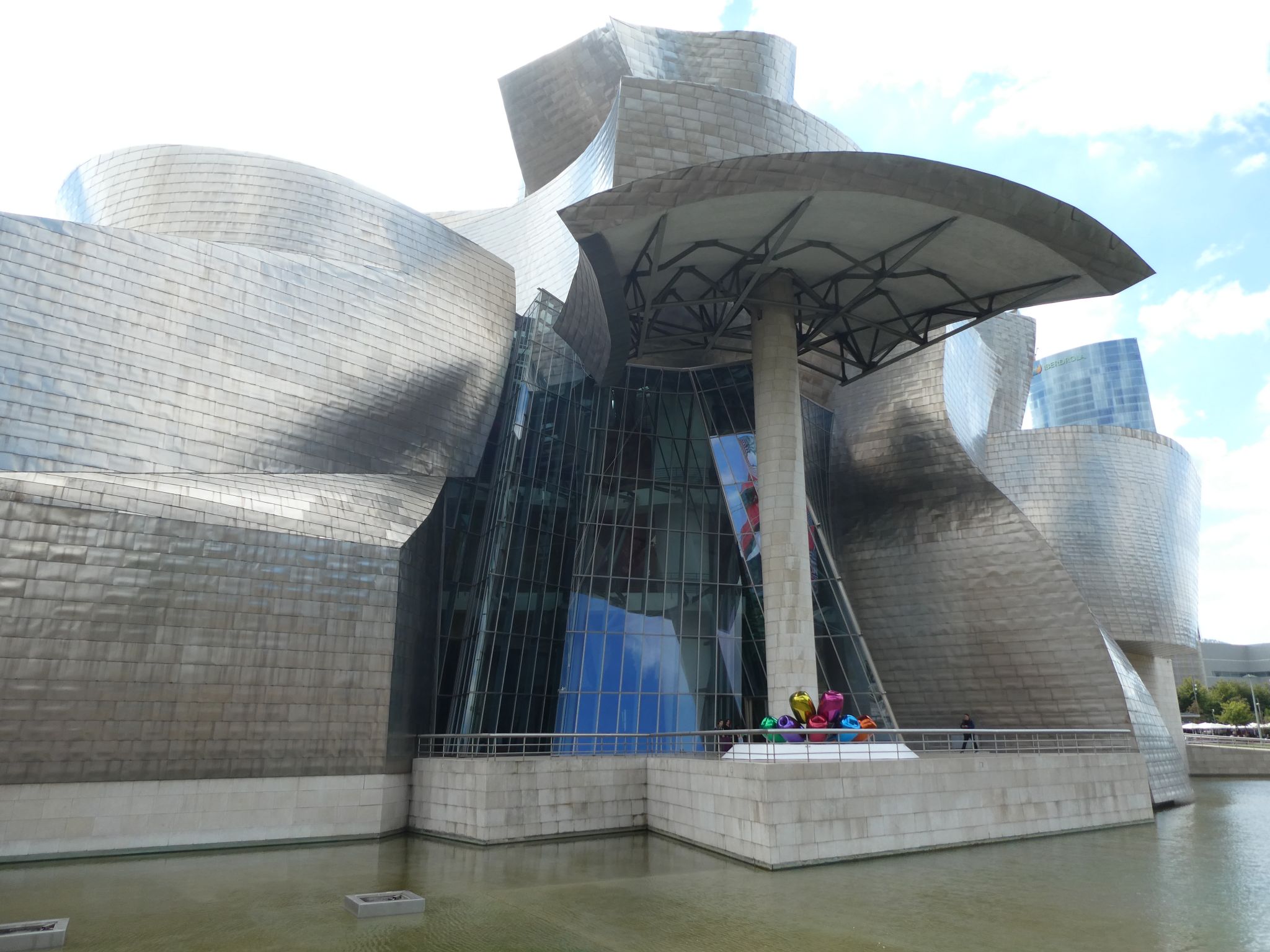 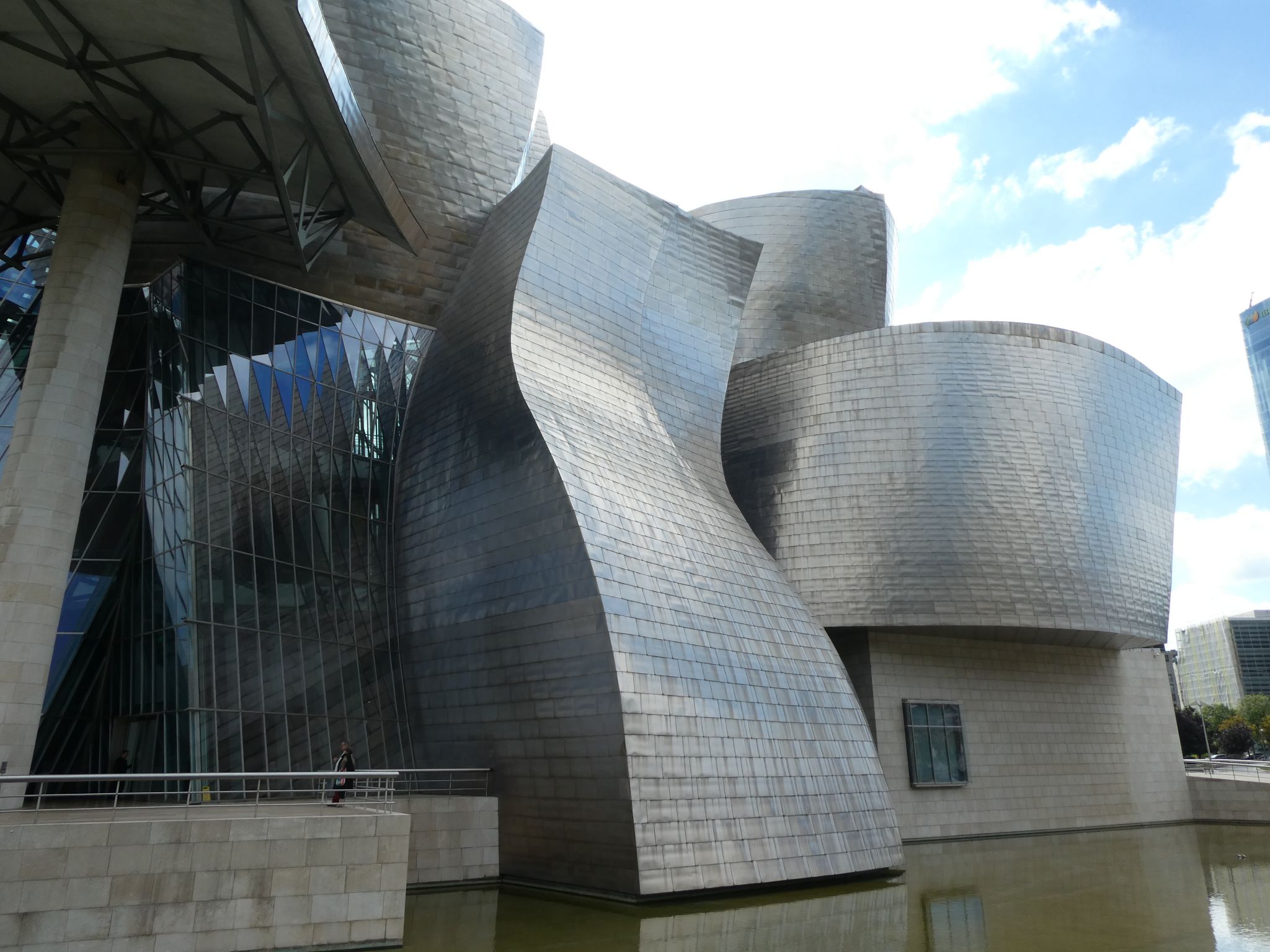 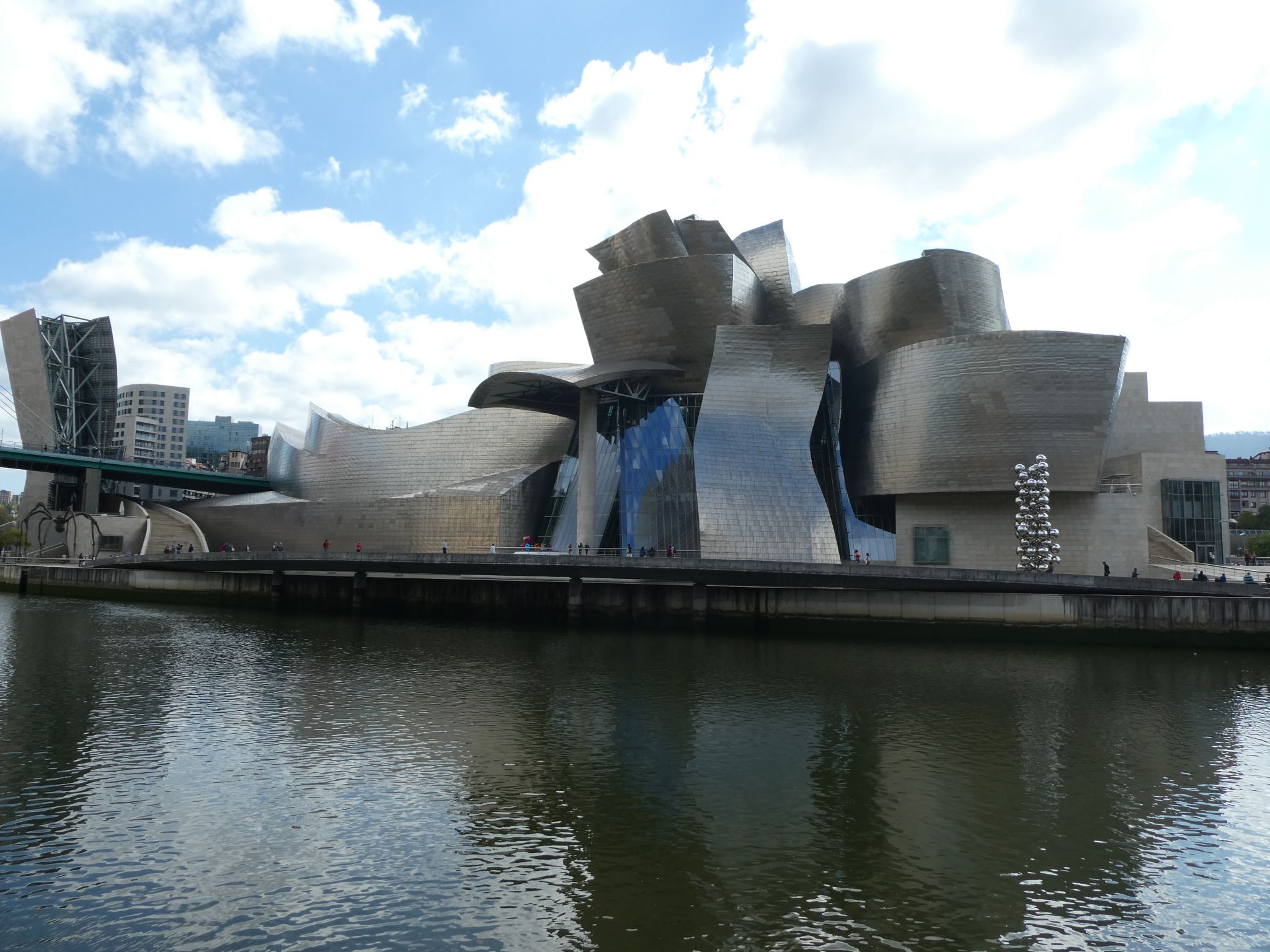 On guard outside the entrance is Jeff Koons’ monumental creation, Puppy.  Puppy was first unveiled in Germany in 1992 before making appearances in the US and Australia – we saw him in Sydney in 1995 – before finding a permanent home here in Bilbao in 1997.

Puppy is a 40 foot tall West Highland terrier composed of flowering plants growing over a stainless steel substructure covered by turf, wire mesh and a geotextile fabric which stimulates plant growth and holds the whole thing together.   Internally, there is a network of pipes continuously watering the plants.

Twice yearly, the plants are replaced to suit the changing seasons.  This process takes twenty people working for nine days.  That’s one expensive dog to groom. 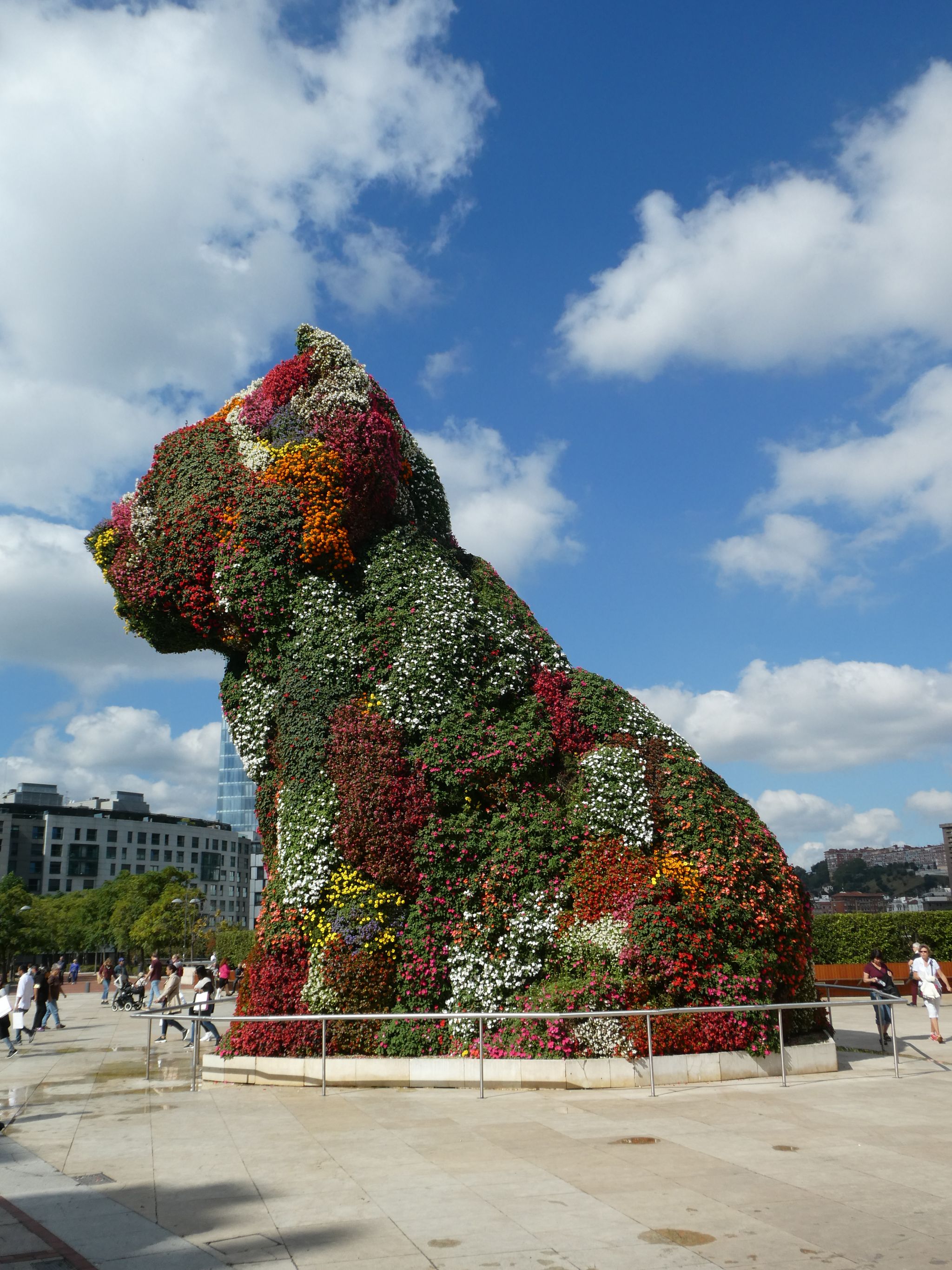 Koons is also famous for his series of sculptures resembling balloon art.  His work entitled Tulips is in the rear courtyard of the gallery. 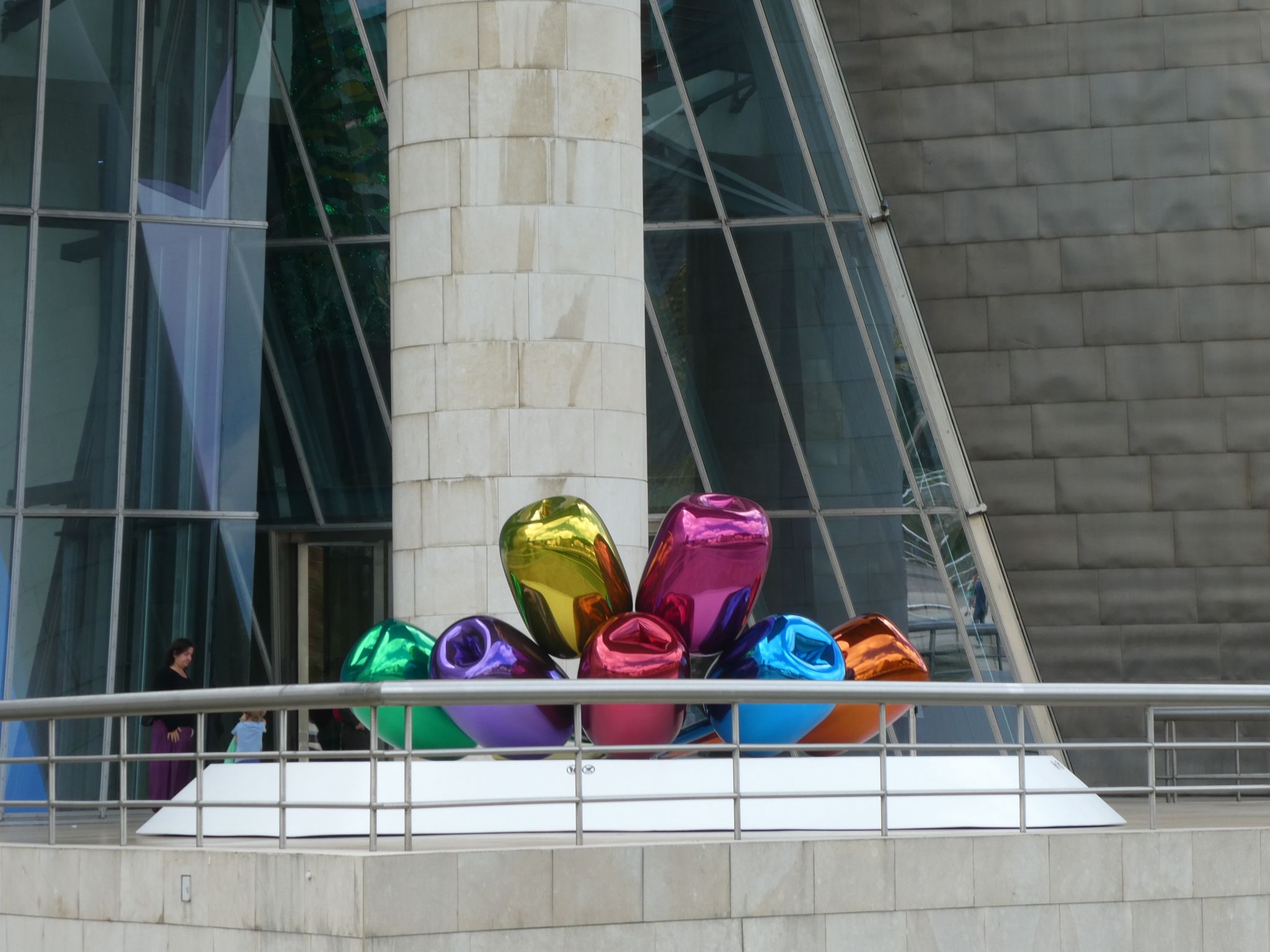 There’s also the elegant but somehow creepy Maman, a giant spider with a sack full of offspring soon to be released. 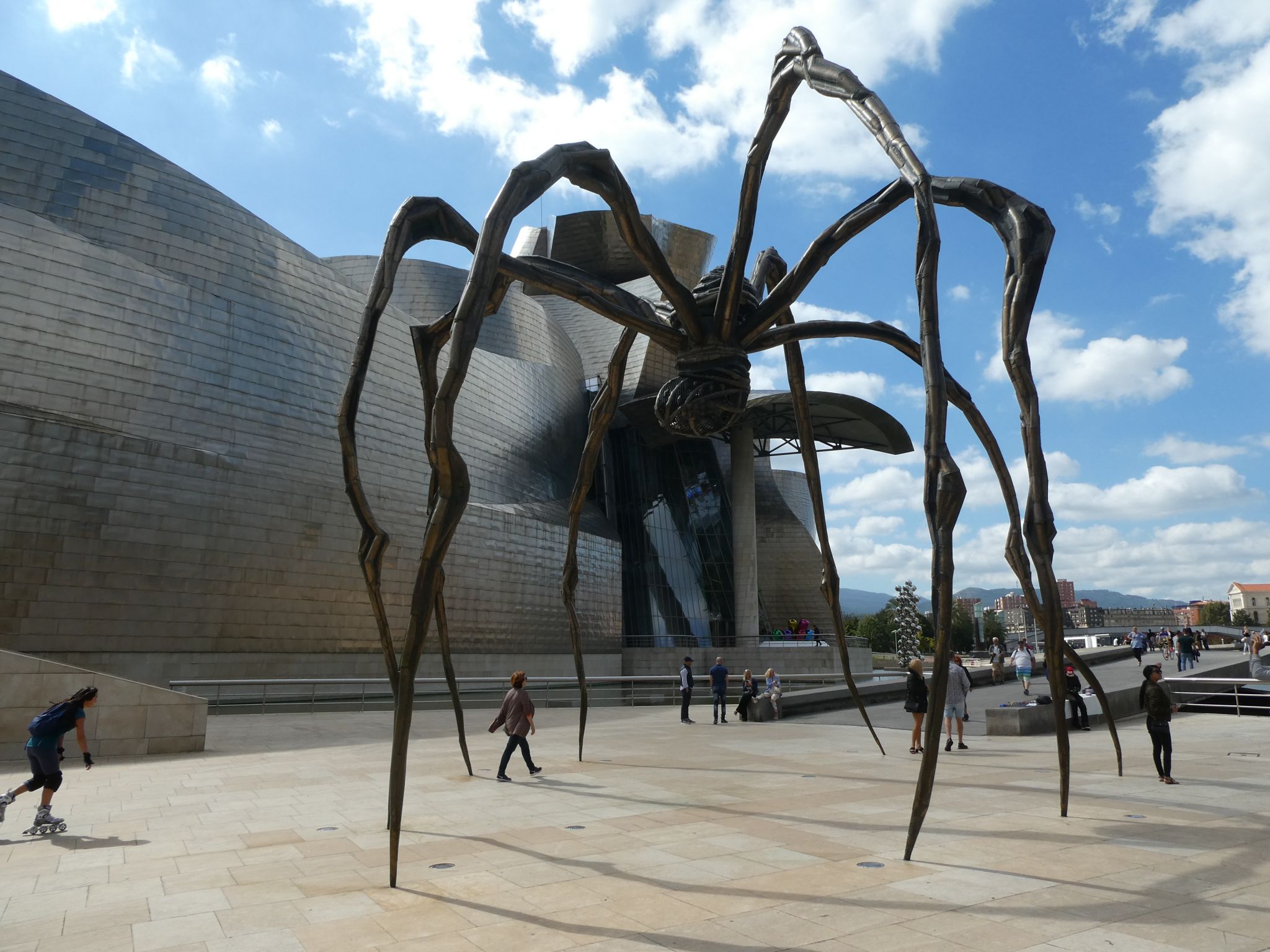 Inside, the museum has a series of galleries on three levels, with walk ways and atrium spaces encased in glass.  Winding through it all is Egeria by French-born Portuguese based artist, Joana Vasconcelos.

This enormous installation was inspired by female figures in Norse mythology, and is comprised of patchwork, bead embroidery and crochet, with thousands of LED lights and what must be tens of thousands of sequins.  It was purpose-created to be integrated into the building, with a bulbous ‘body’ suspended within the main atrium and ‘tentacles’ curling around columns and through the open spaces on the various levels of the gallery.  To us it resembled a giant, technicolor octopus exploring all the nooks and crannies of a new environment. 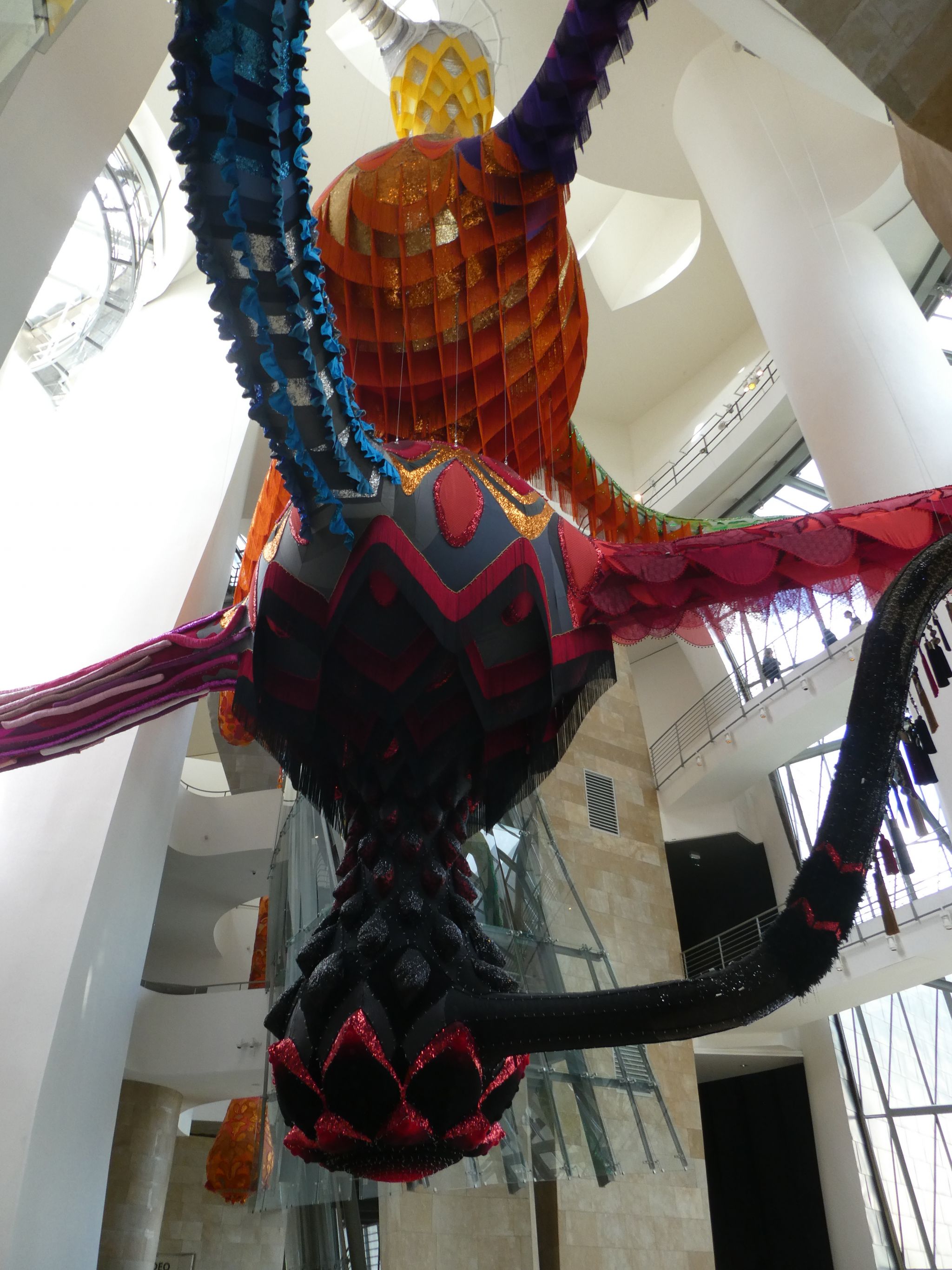 At the time of our visit, the gallery also had a temporary exhibition by the same artist, with pieces including an enormous pair of stilettos made of cooking pots and a helicopter clad with ostrich features and rhinestones. 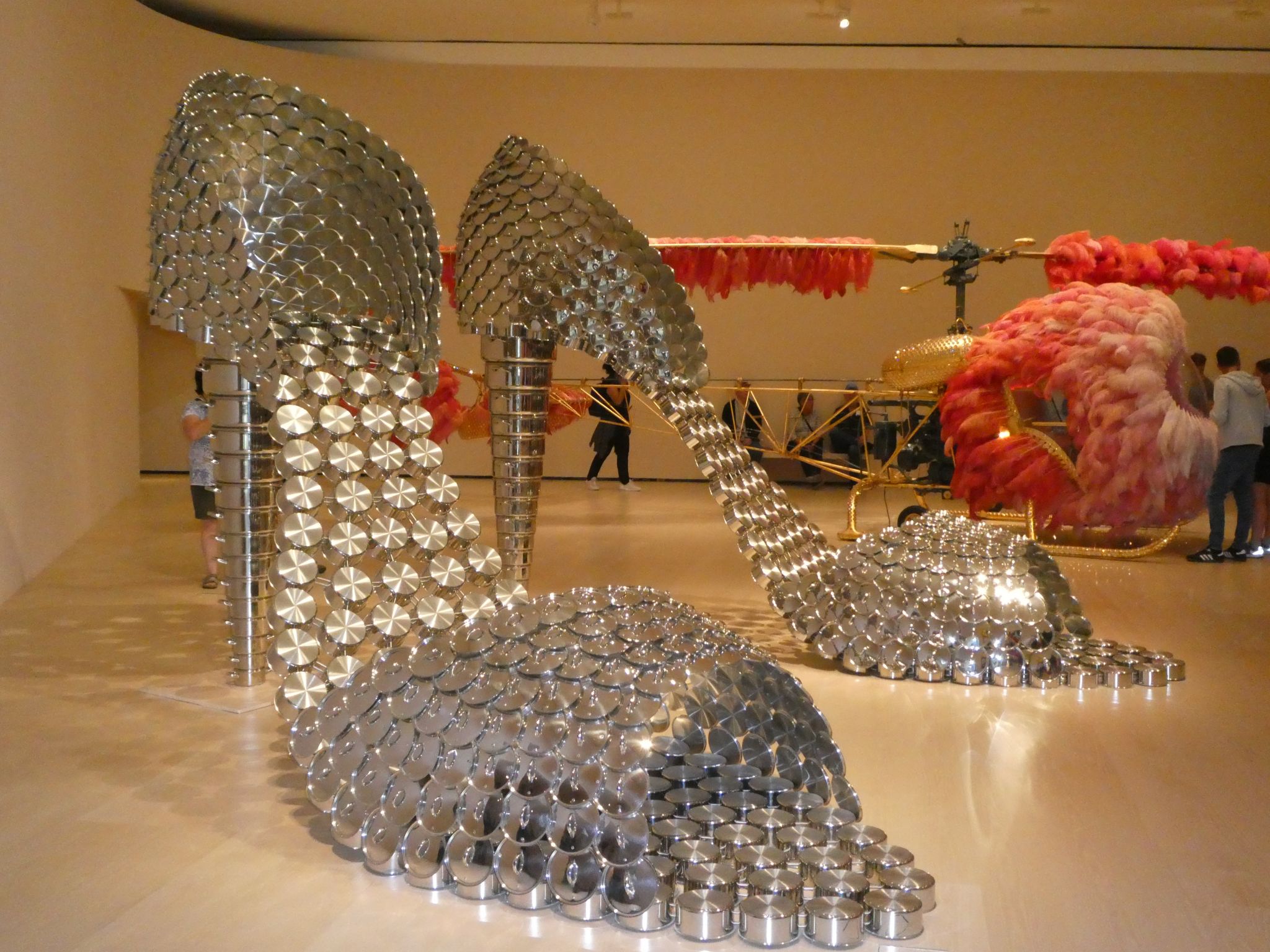 Another of her creations was outside.  Solitaire is a huge diamond engagement ring composed of whiskey glasses and gold painted wheel rims from luxury cars, thus ‘combining some of the most stereotyped symbols of masculine and feminine desire’ according to a press release about its installation. 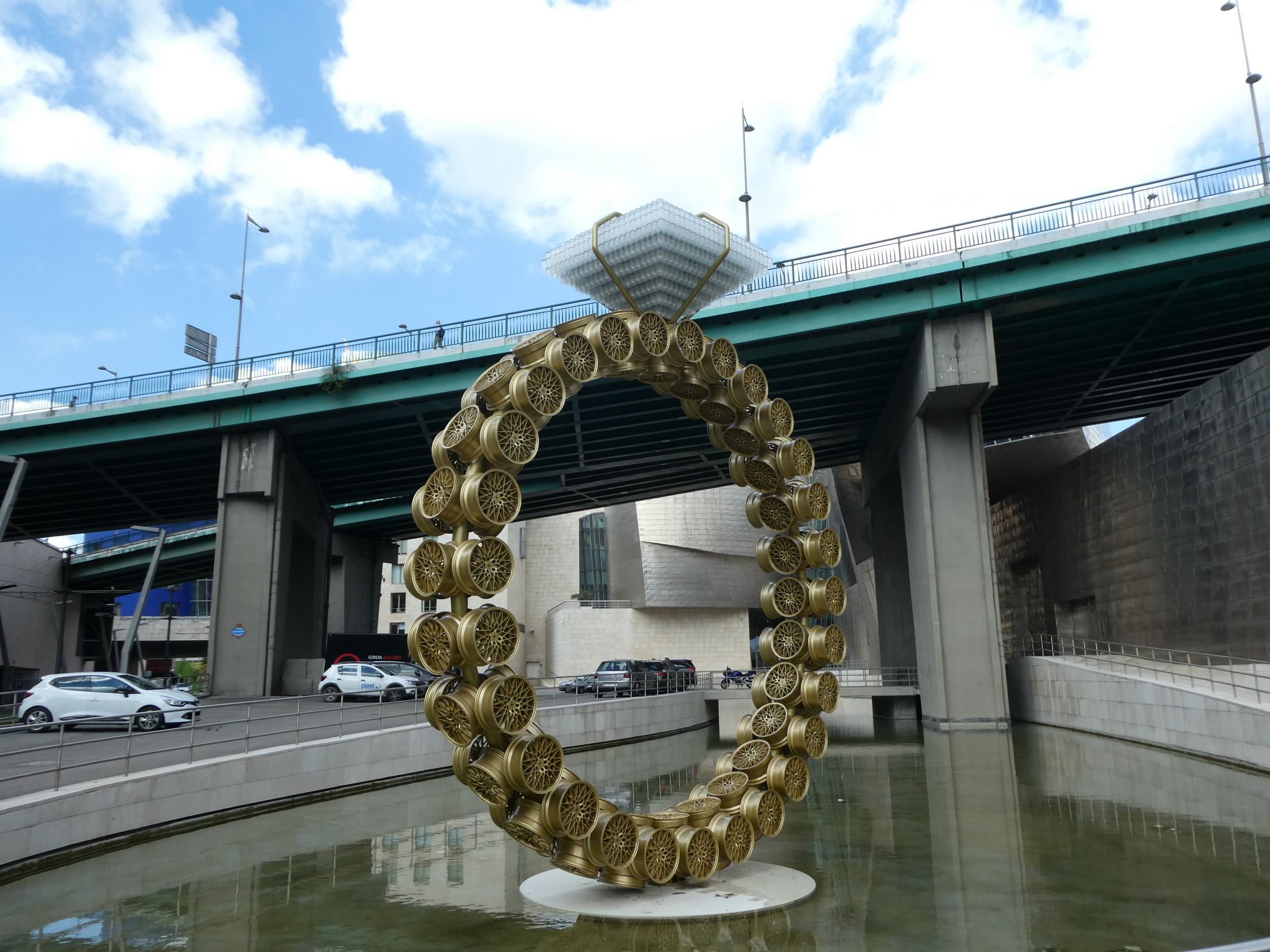 An audio guide explained the deep and meaningful symbolism of all these pieces, but we also enjoyed the sheer ingenuity of the constructions.

The Guggenheim may be responsible for putting Bilbao on the tourist map, but the city has quite a bit more to offer.  From the Guggenheim to the Casco Vieja (Old Town), is a very pleasant 20 minute walk along the Nervión River with some outstanding architecture along the way. 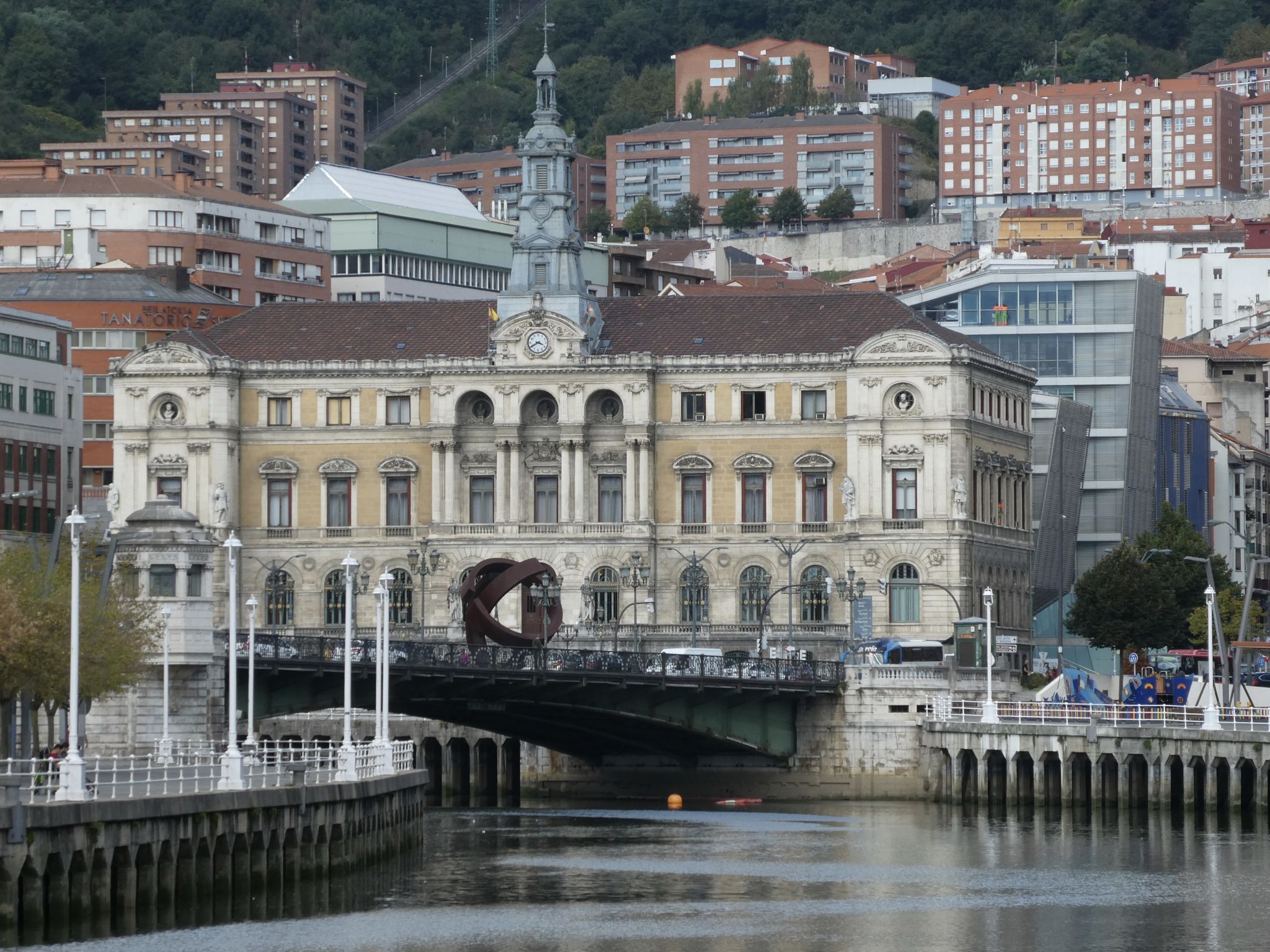 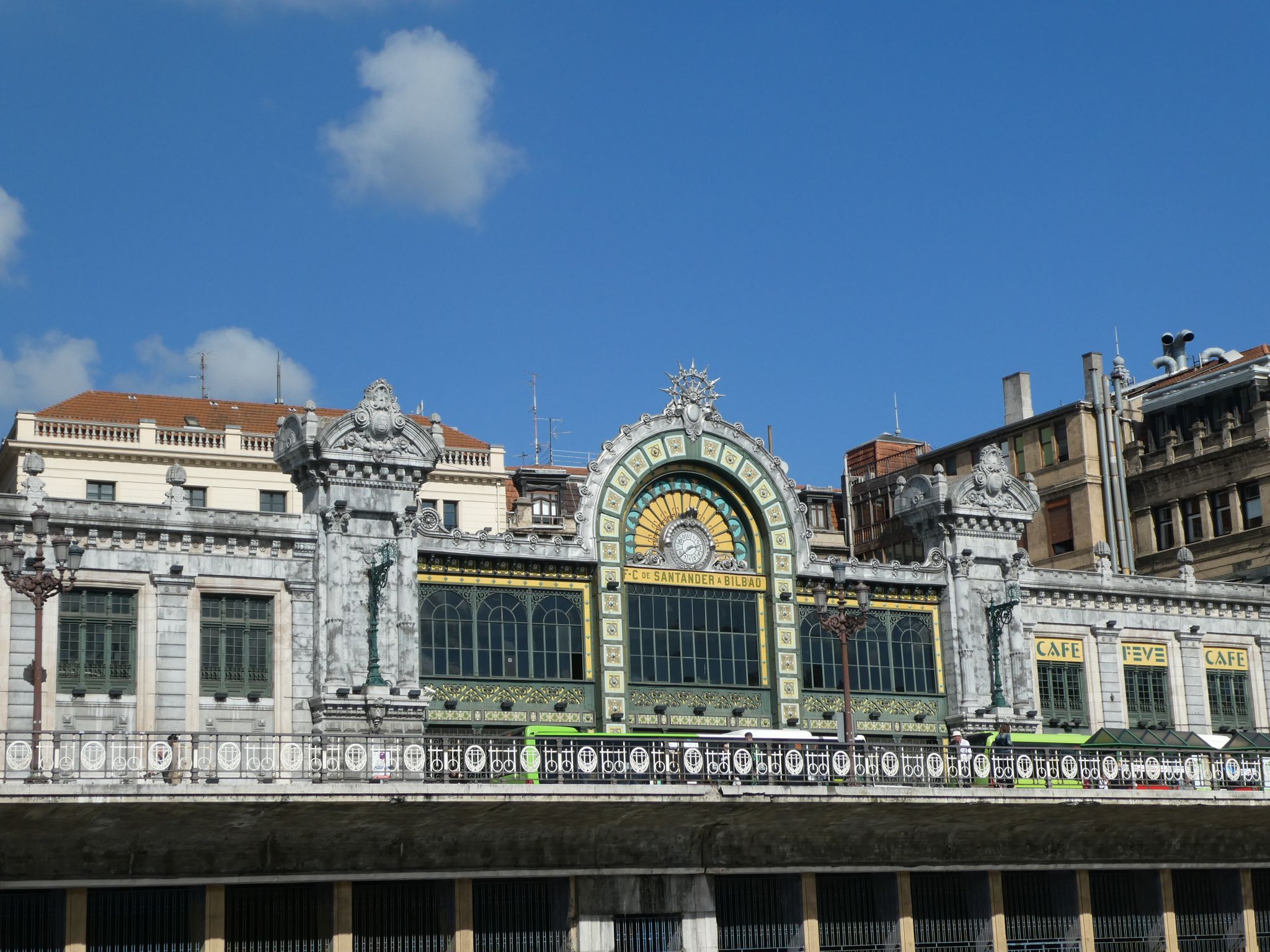 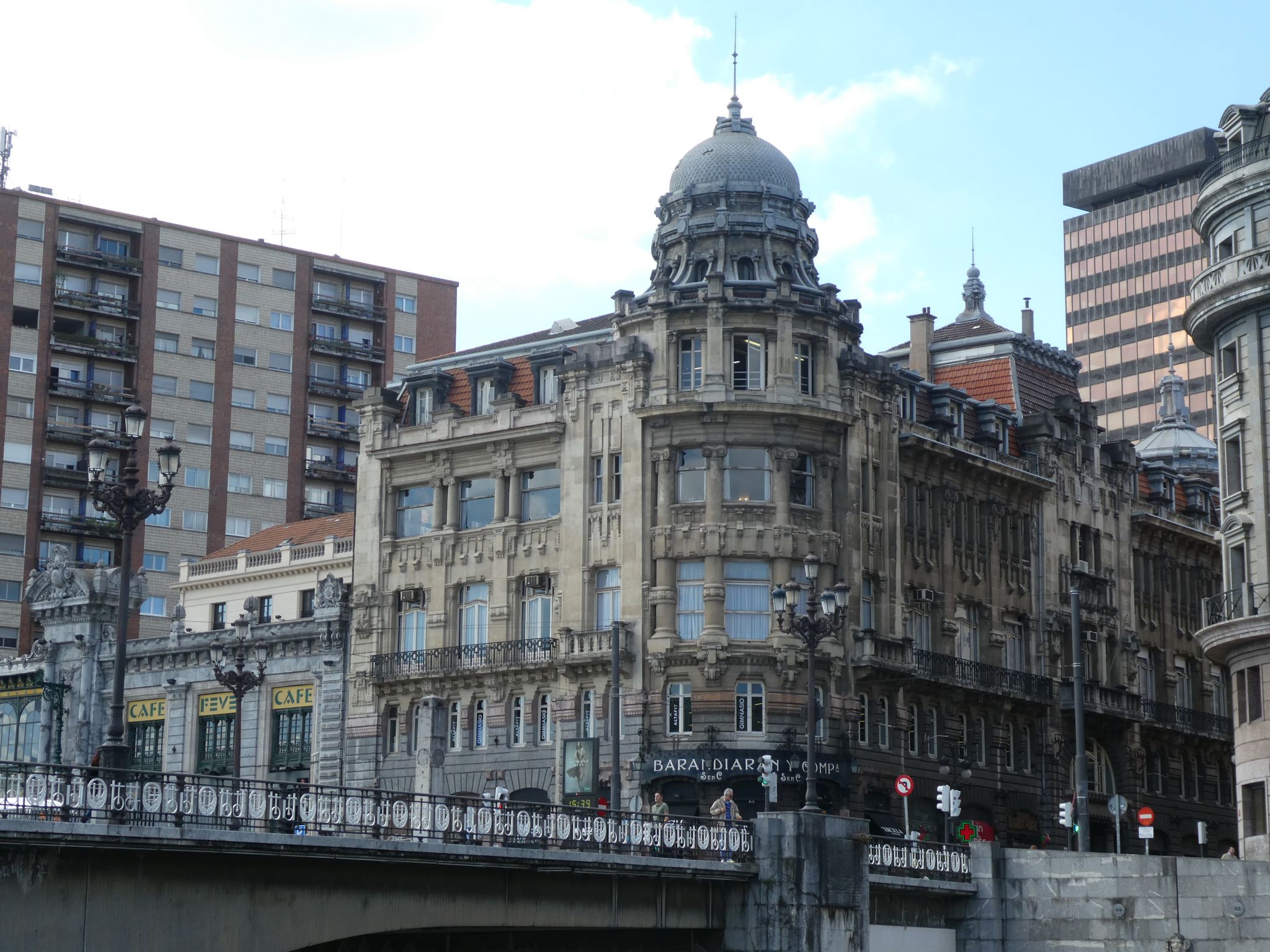 As you reach the Old Town, a boat shaped building on the river contains La Ribera Mercado, a fresh produce market full of fantastic looking food and a collection of bars with an impossibly large choice of pintxos.

Pintxos (literally ‘a spike’) are snacks usually served on a small piece of bread with the topping secured by a toothpick.   It is the toothpick which distinguishes pintxos from tapas, which are more local to Madrid and don’t use a toothpick, although nowadays the terms are used interchangeably in many places.   Pintxos are taken very seriously in Bilbao and annual competitions to decide the best pintxos bars in the region are hotly contested.

The Casco Vieja (Old Town) is a small precinct replete with neoclassical era buildings and is worth exploring.  Compact, car-free, beautiful architecture and, if you visit mid-afternoon when many shops are closed for siesta, remarkably tourist free as well. 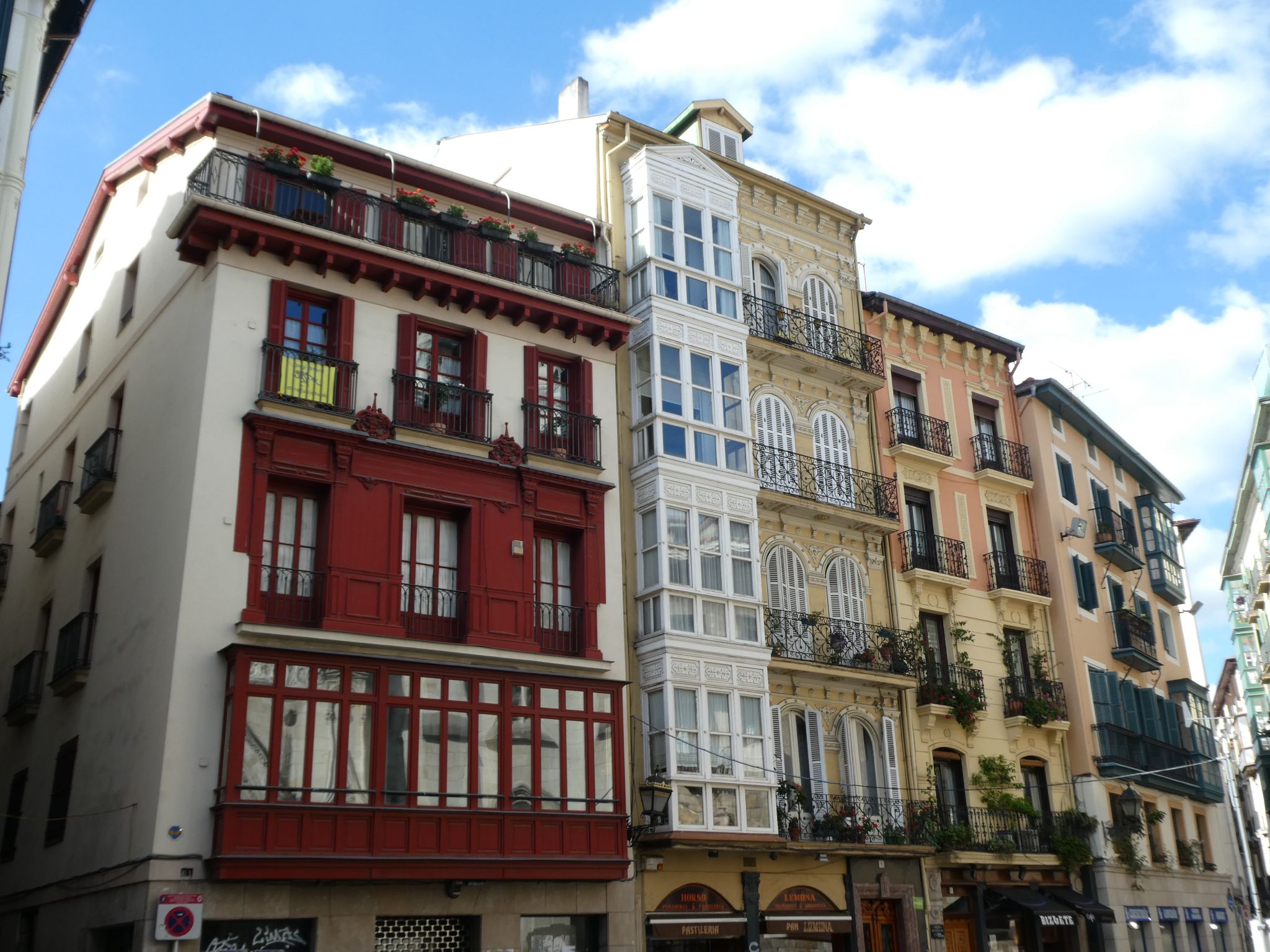 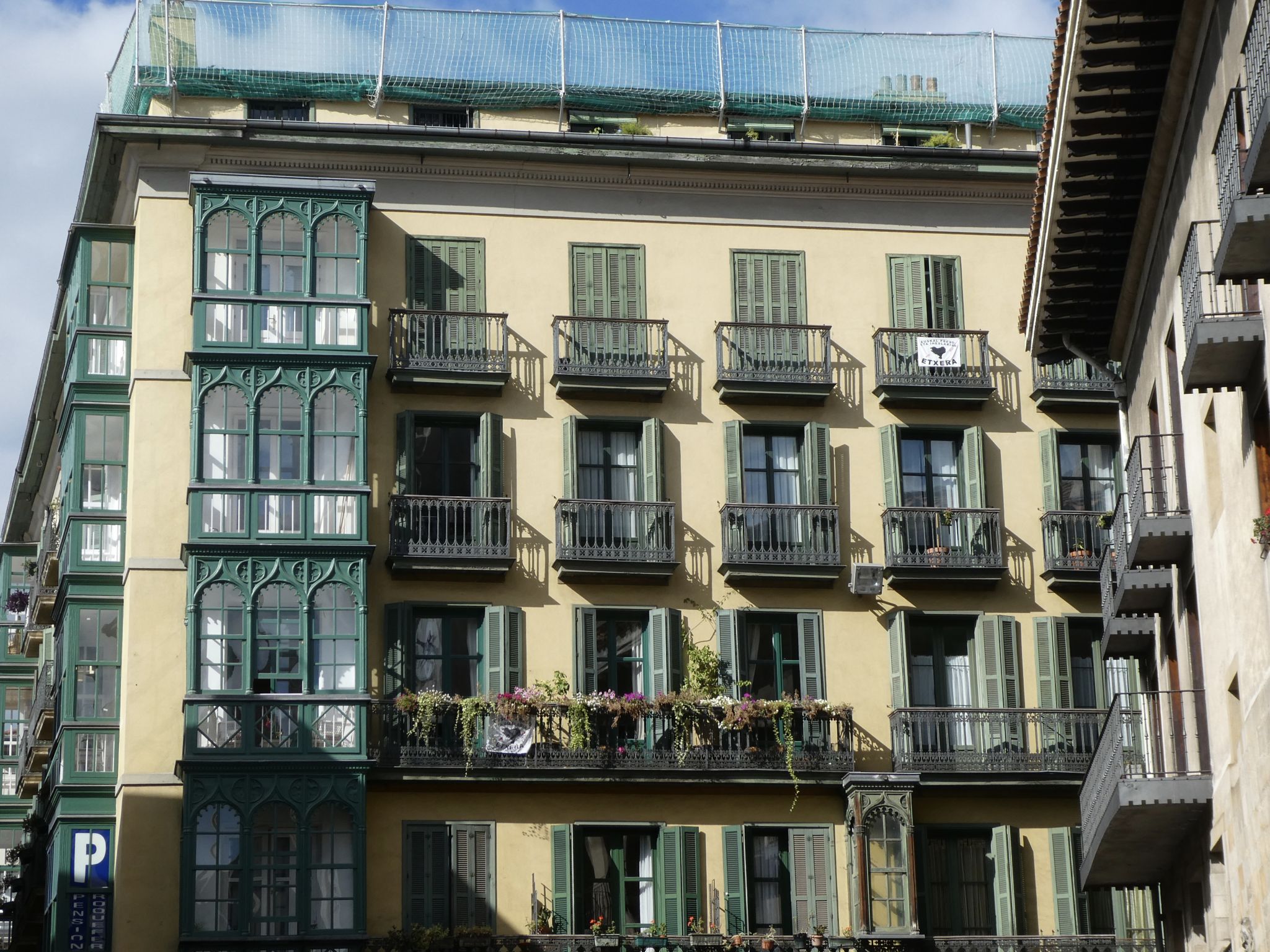 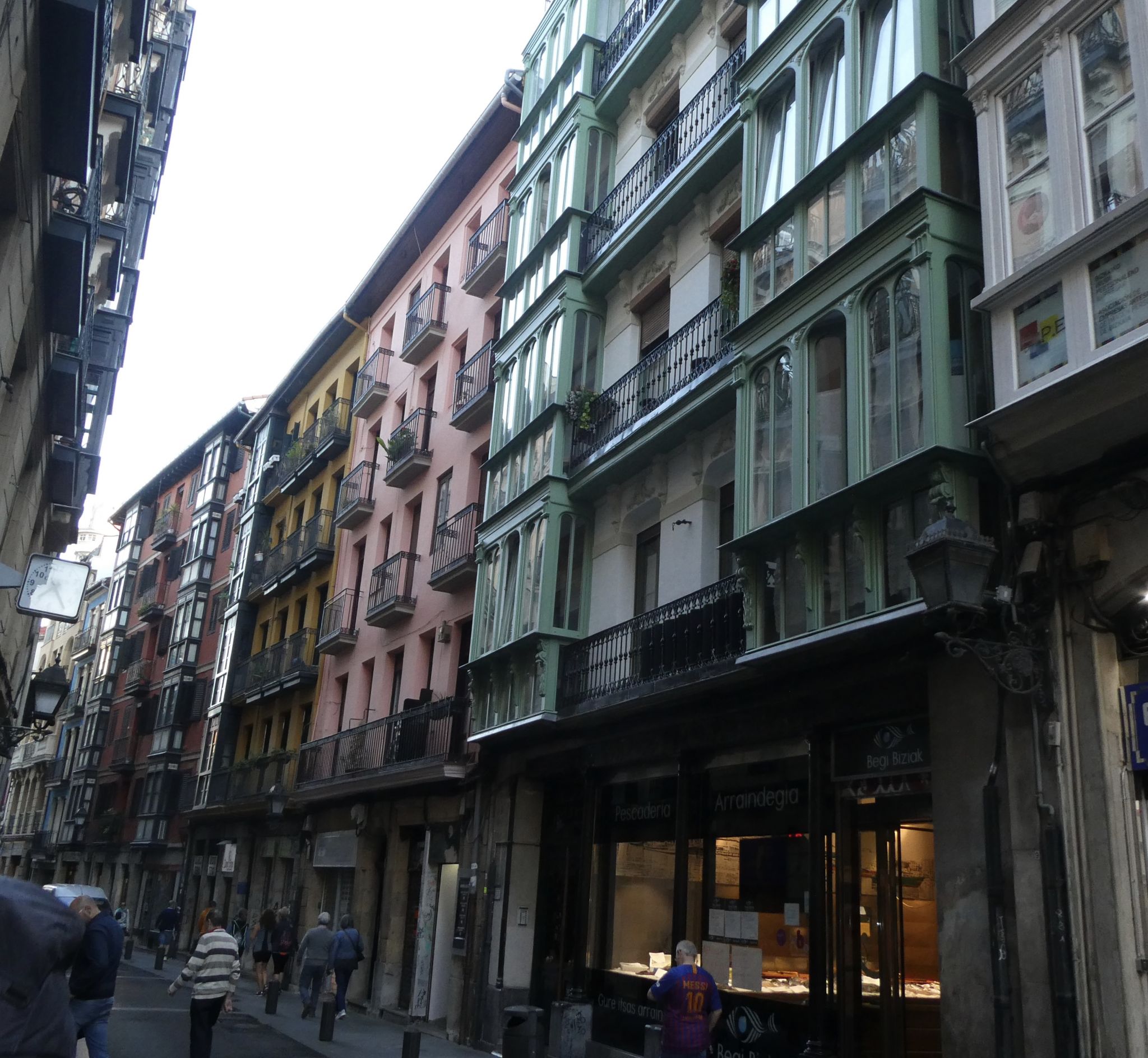 It’s a great place to stay, and is home to the Plaza Nuevo, an enclosed square with pintxos bars on all four sides.  You can spend a most enjoyable evening hopping from one to another.  And we did, kidding ourselves that we would walk off all the pounds on our next venture – six days hiking in the Picos de Europa.