This 106 km walk in northern Spain begins in the stunning Picos de Europa mountains, then heads over rolling green hills of farmlands and tiny villages, and on the final day, follows beautiful bays and beaches around the Asturian  coast to finish at the historic town of Llanes.

In the early 1900s, a channel was fashioned along the length of the Cares Gorge to direct water from a reservoir on the small town of Cain to a hydroelectric plant near Poncebos at the other end of the gorge.

Along the 11km length of the gorge, the water channel goes through 71 tunnels and otherwise flows along the natural watercourse at the bottom of the gorge.

A path was cut along the side of the gorge for the original construction works and for maintenance workers to access the channel once it was operational.

As the area is now national park and the path is no longer used by the hydrology workers, the trail has been modified and opened to the public as a hiking trail.  The gorge can be accessed by walkers from either end.  We started at the Poncebos end where a foot track first climbs high above the river, then skirts the side of the gorge, gently rising and dropping as required to keep a safe path.

The landscape is big.  If that sounds odd, spot the tiny man in the second photo and you’ll know what we mean. 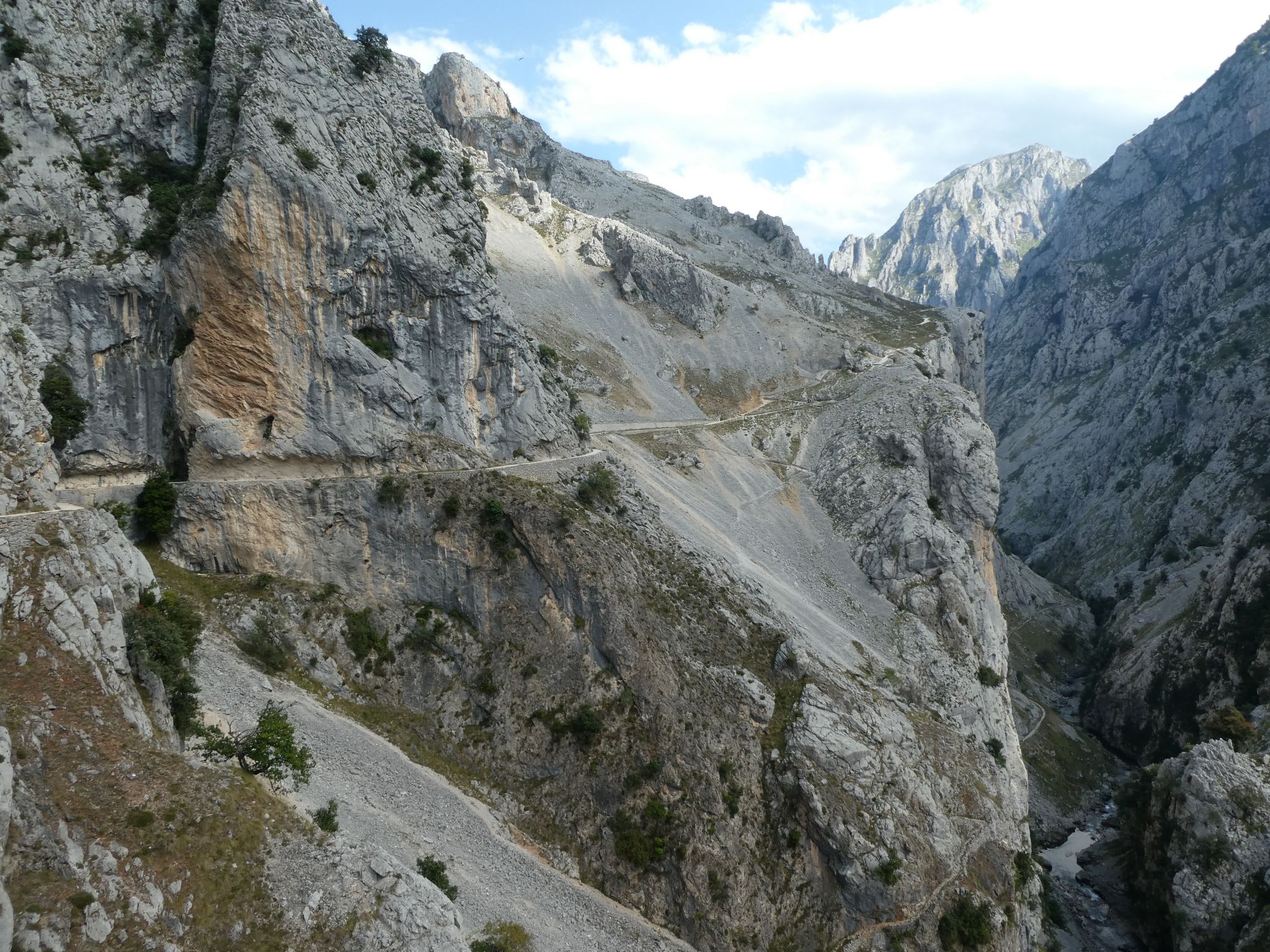 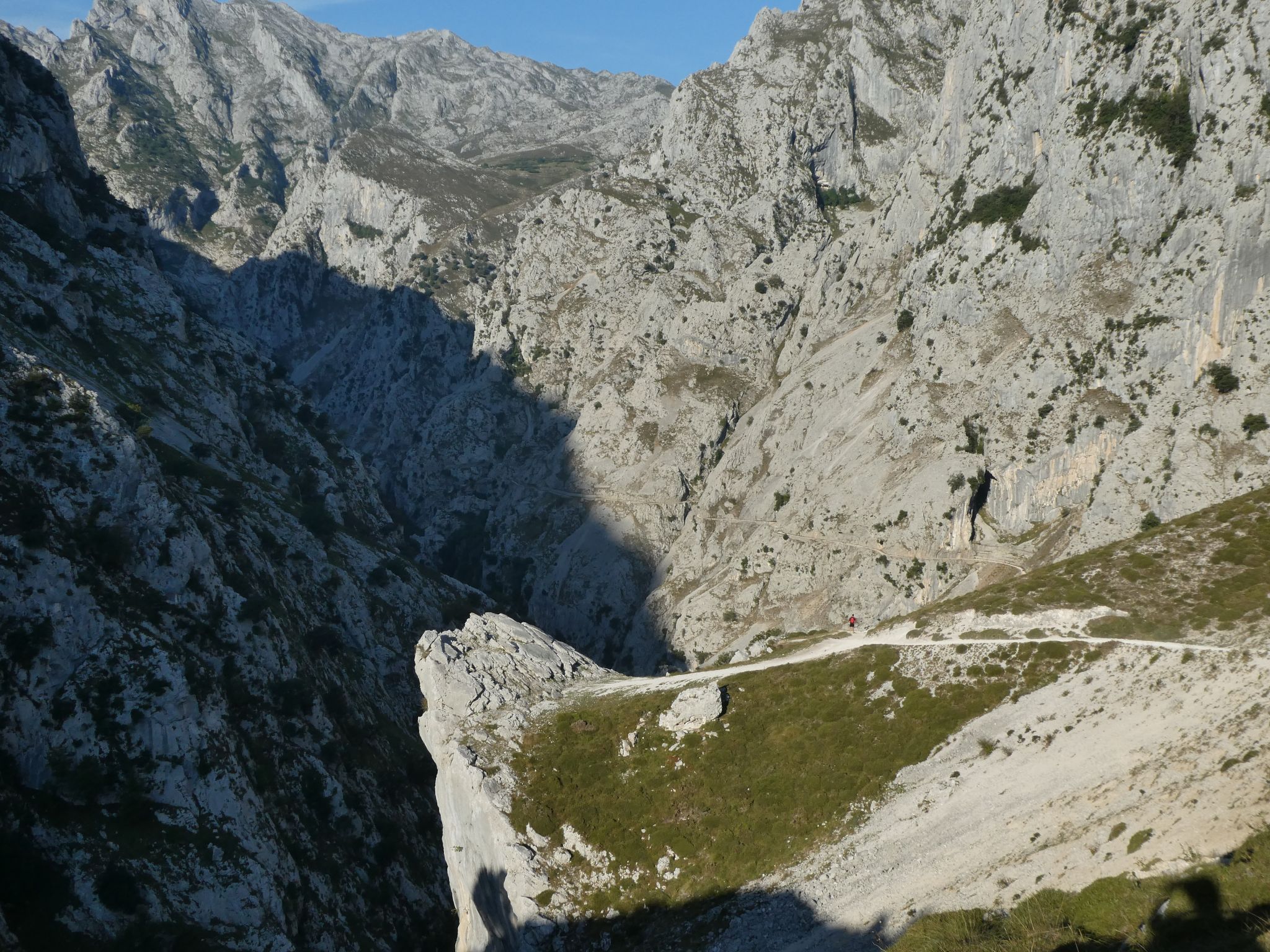 Above 1,600 metres there is almost no surface water, as any precipitation just drains straight through the limestone.  The only plants are scrappy sub-alpine ones.  Not good for human settlement, but agreeable for goats. 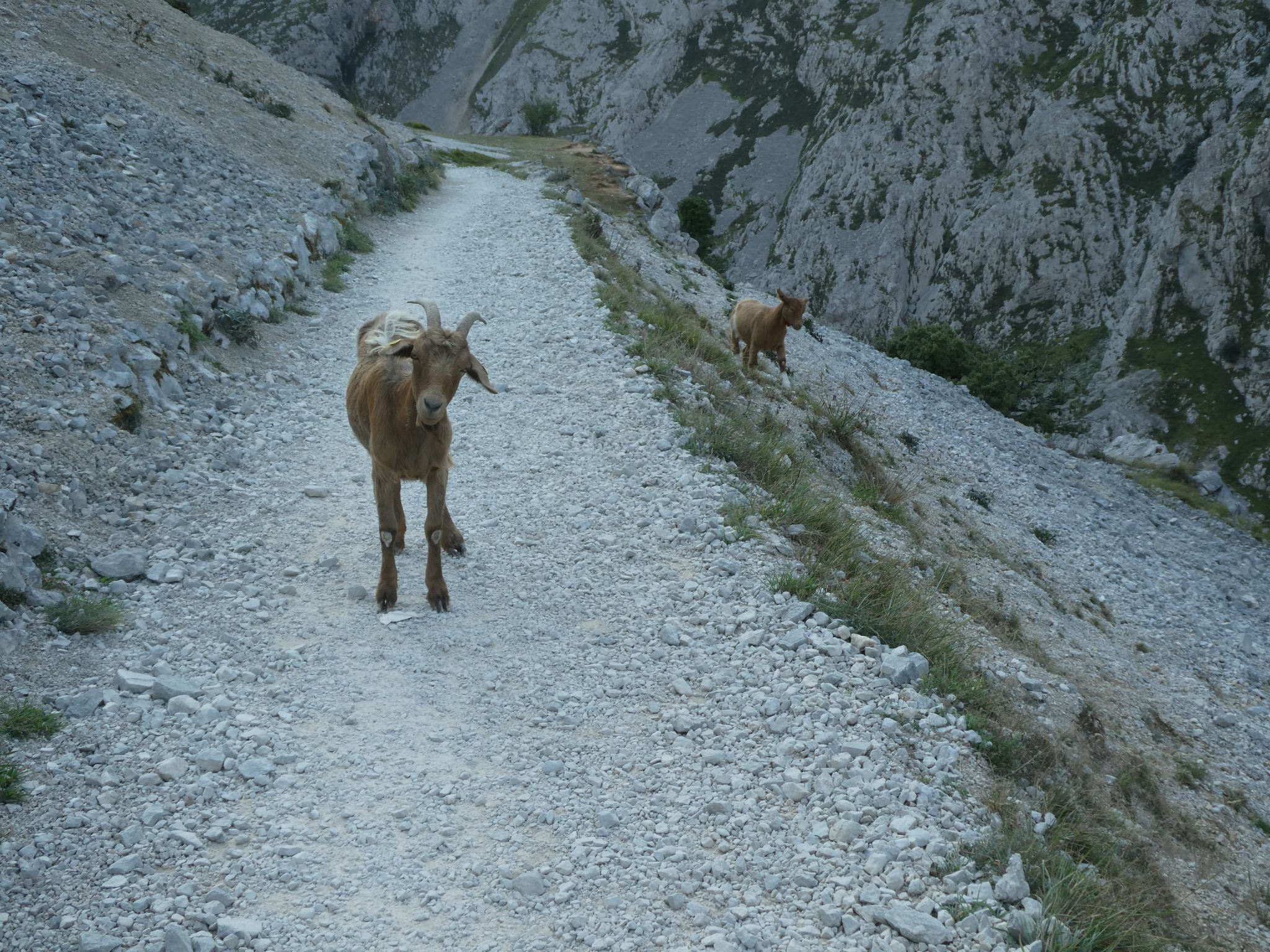 Toward the Cain end, the gorge narrows and the environment is wetter and cooler.  The path gently descends and where the gorge becomes almost vertical, the path has been cut into the gorge wall. 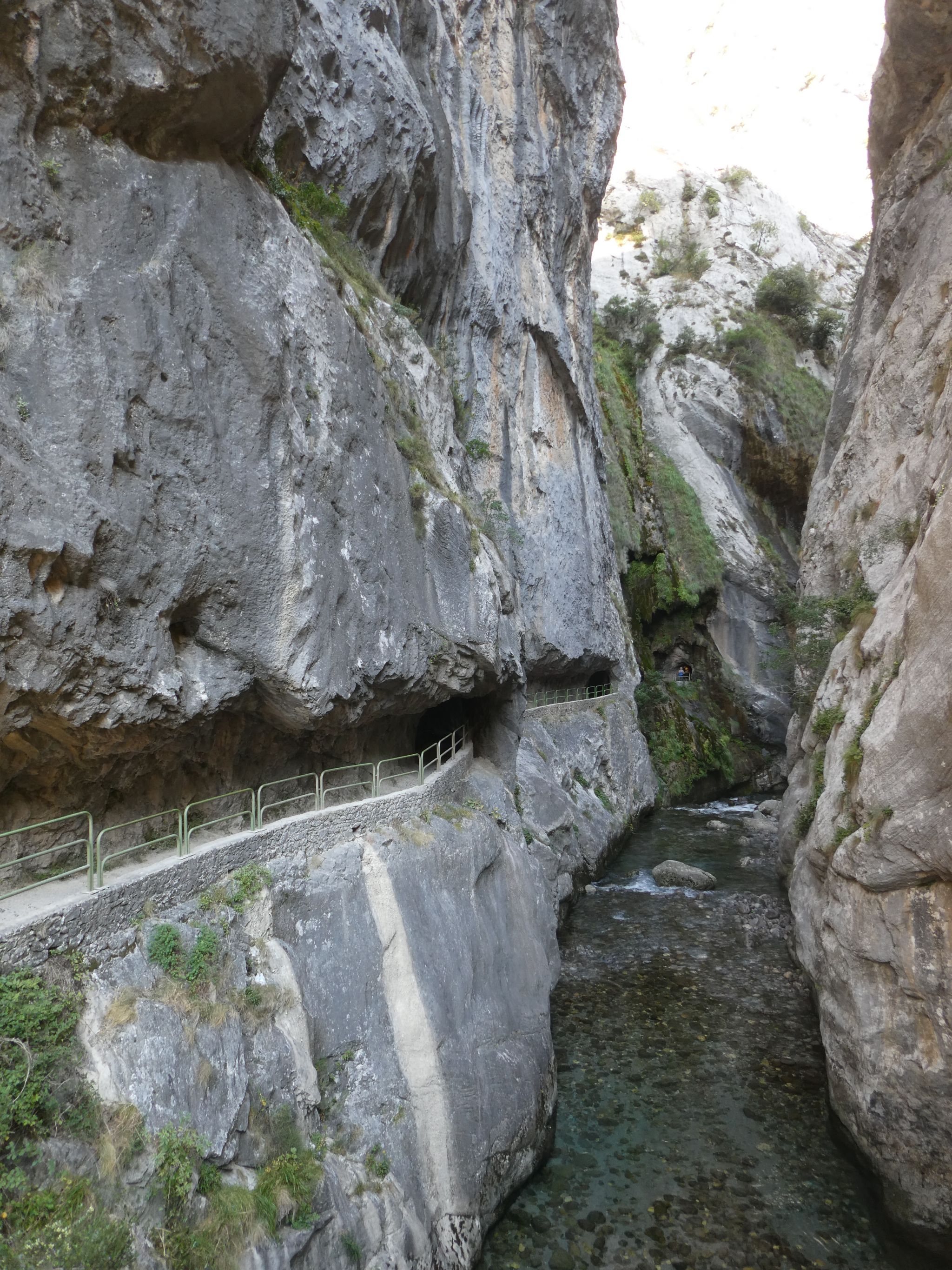 Emerging from the gorge, the views up to the Picos were unbeatable.

We had a picnic lunch admiring the view, then headed back again.   It was a hot walk and there’s a bar with a covered verandah strategically located just a couple of hundred metres after the walk reaches the road.  We were pleased to finish with time to spare for a couple of ice cold beers before the driver arrived to zoom us back to our hotel in the small village of Las Arenas.

Day 2 – Las Arenas to Pandiello: We headed out of Las Arenas and up through the northeastern flank of the Sierra de Debros.  Once we reached some height, we were rewarded with beautiful clear views across the mountains.

Then the track dropped down to the valley and through the cute little village of Carrena where we stopped for coffee. 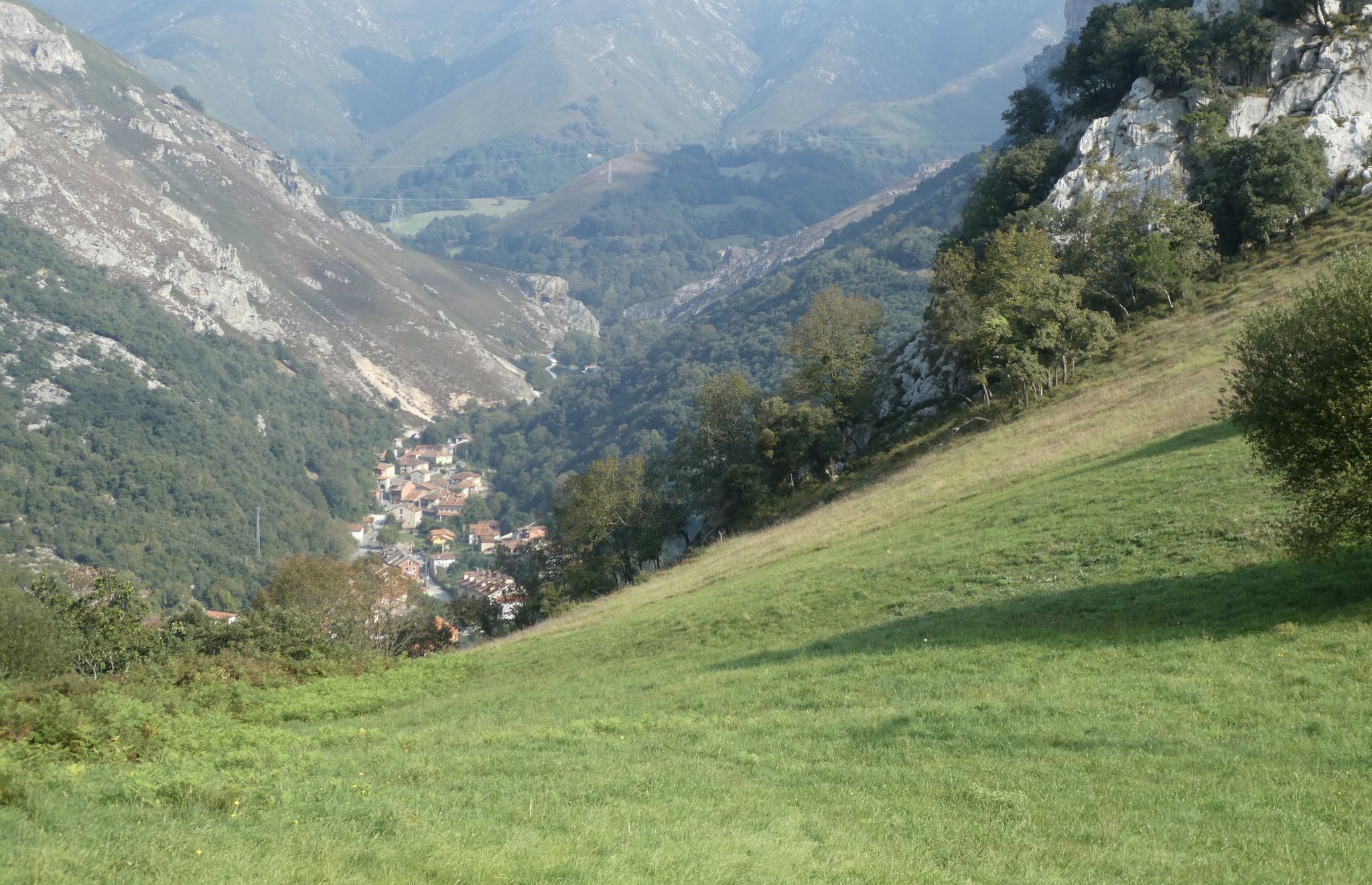 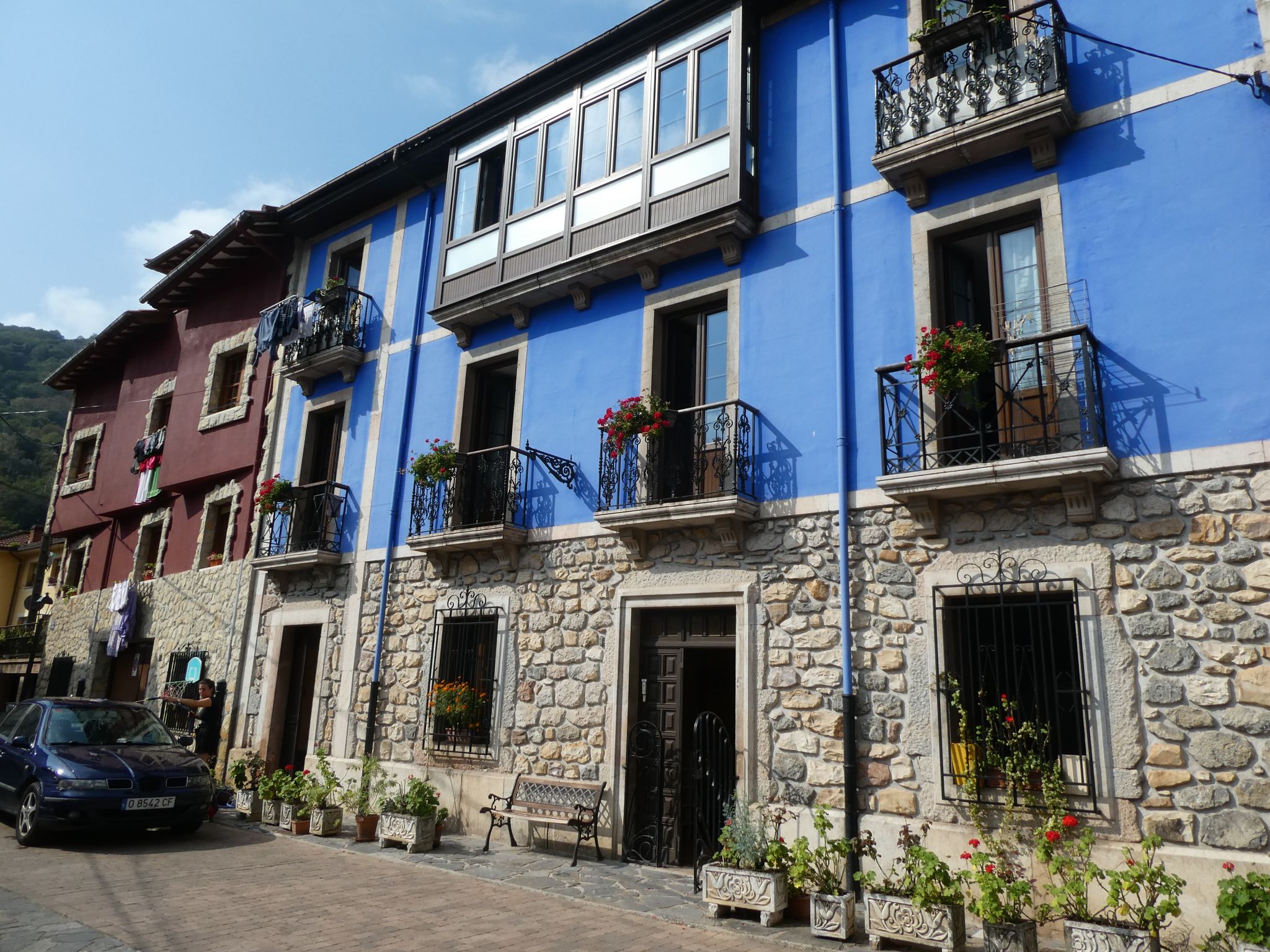 We continued on, stopping by a natural spring for our picnic lunch.  With our dodgy Spanish language skills, we thought this meant ‘Spring of Llamas’ but apparently it means ‘Spring of Flames’. 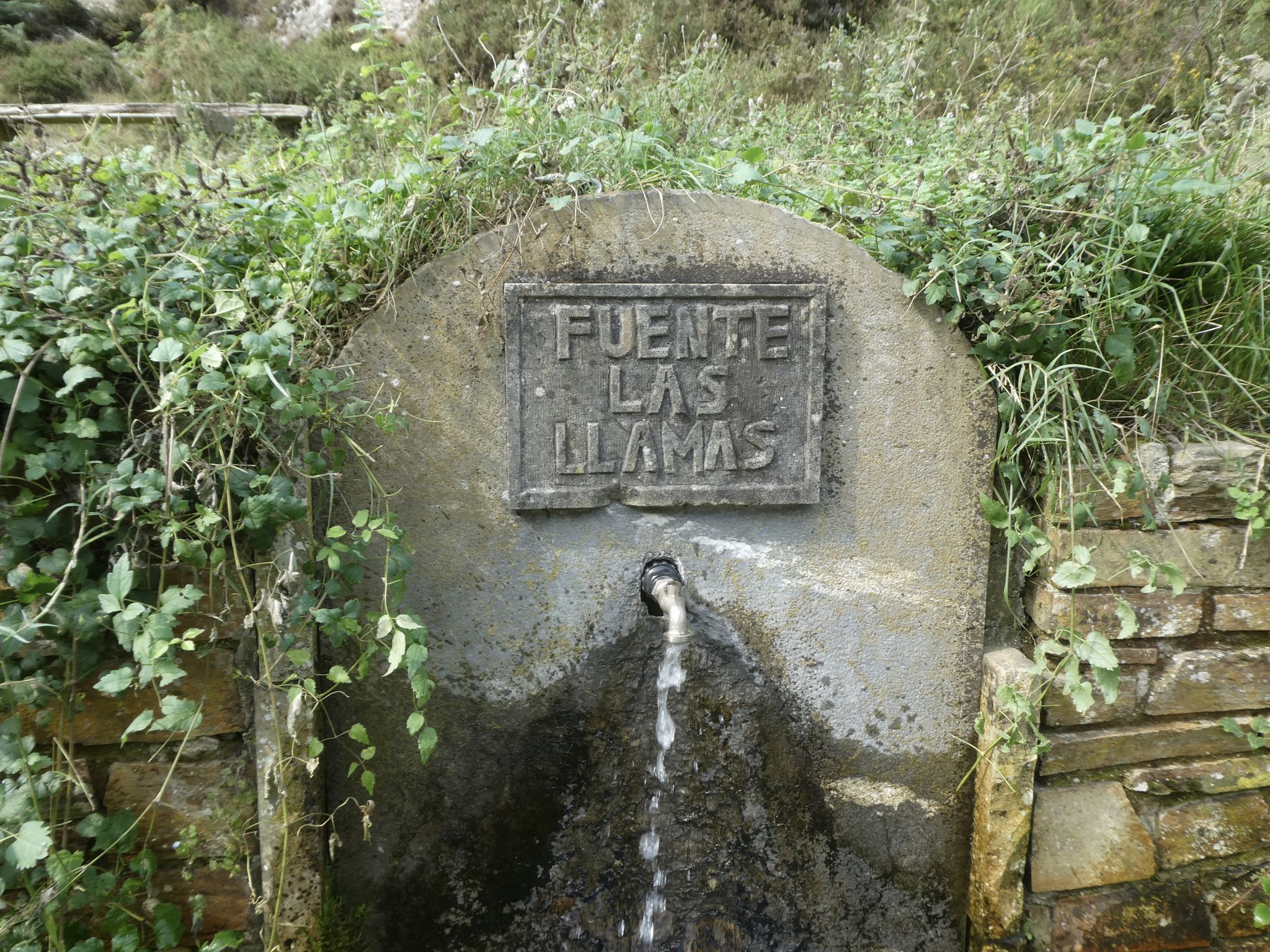 We climbed and descended several times, each ascent giving great views over green pastures and over to the distant high peaks.  We saw no other walkers all day and really enjoyed the solitude.  It feels like nothing has changed here in centuries.

It was a beautiful walk, ending in the small village of Pandiello, population 30 residents.  Our accommodation was a renovated 16th century rural guesthouse, Casa de Aldea la Portiella del Llosu, where we were the only guests for the night.

There was an impressive view from the garden where we had a few beers to cool down.  The only sound was cow bells and the occasional goat, and we enjoyed a hearty dinner cooked by our very kindly host, Jose. 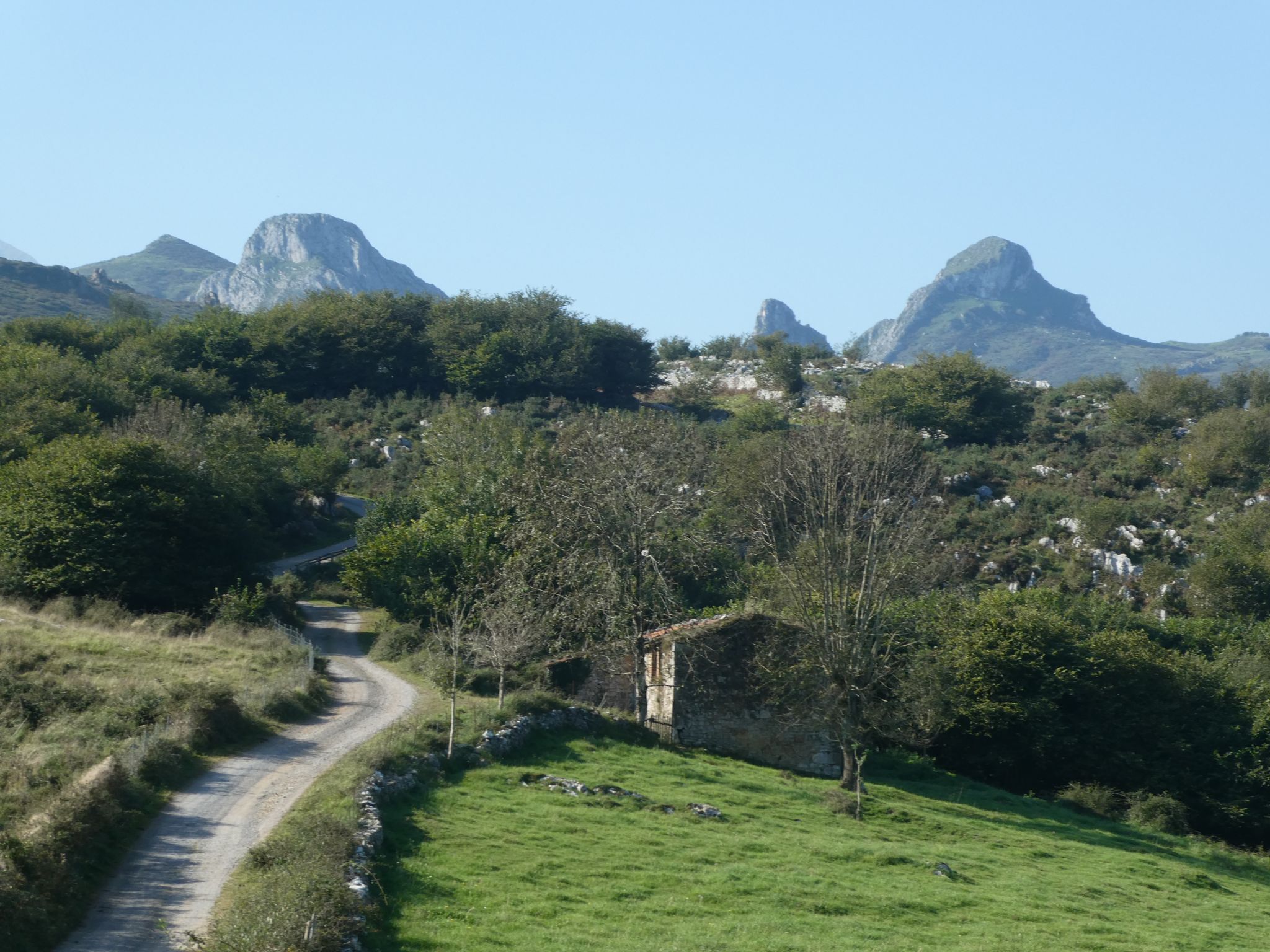 Then climbing steadily back into the mountains we reached a high pass where Asturian ponies and donkeys roam free.   Farmers graze animals up here in the summer, but it still has a feeling of absolute remoteness. 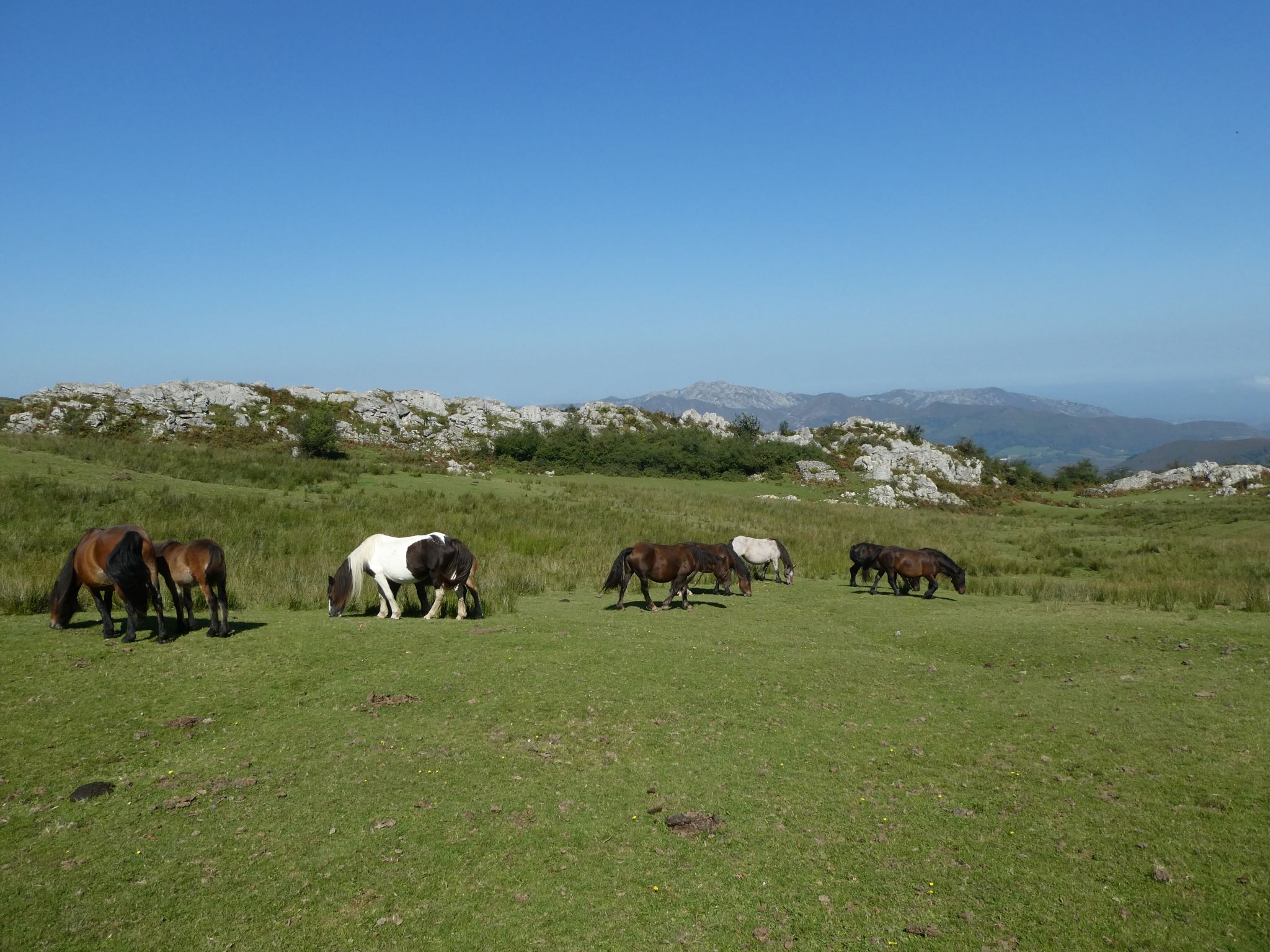 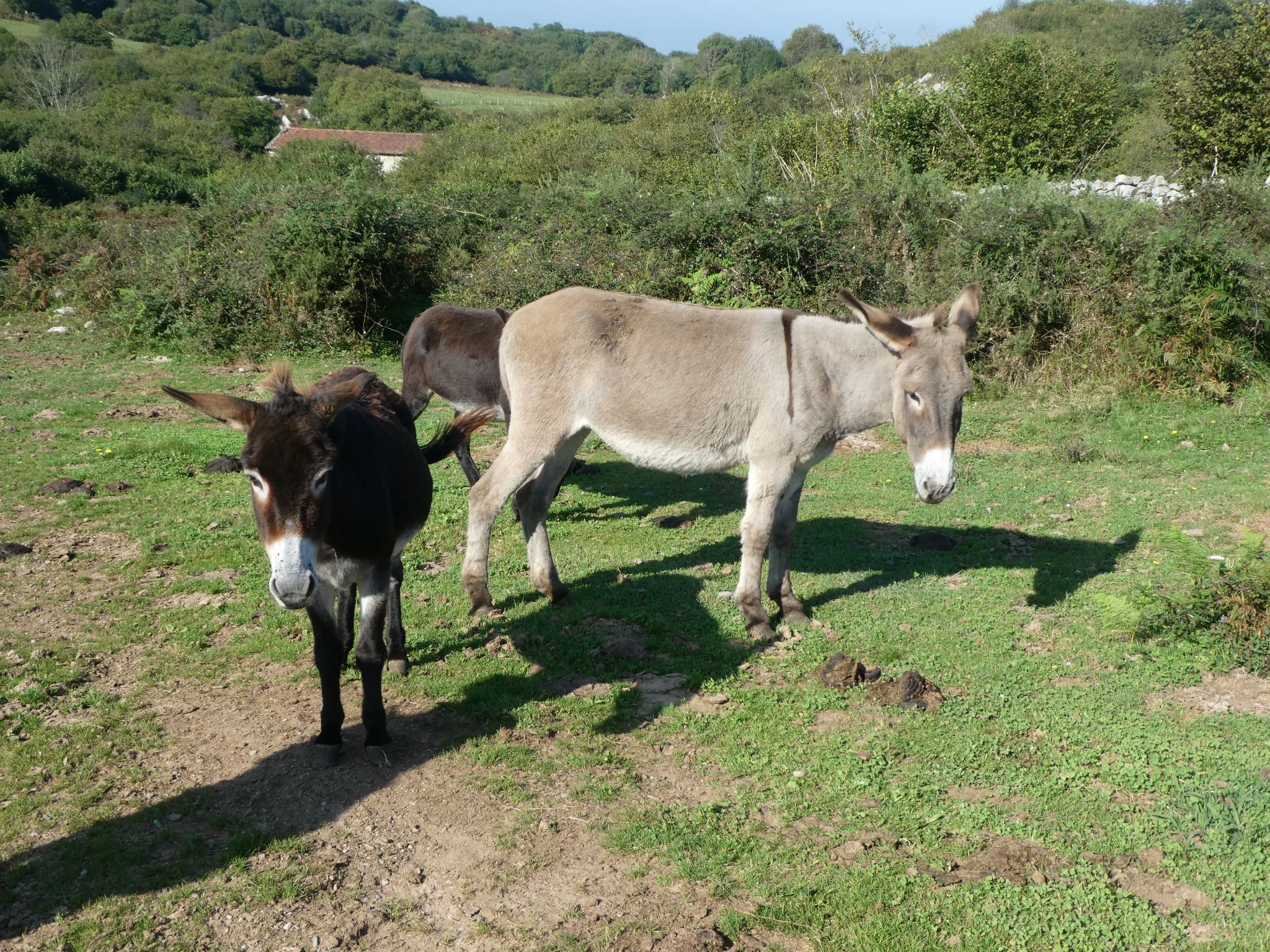 Across the high areas there was no real ‘track’, just directions based on visual landmarks.  Our track notes warned not to attempt this walk if the weather was foggy or there was low cloud, and it was easy to see why.  Luckily, we had brilliant weather and the views were stupendous.

We stopped for our picnic lunch on the edge of the pass looking out over the valley of the Rio Casano.  Money could not buy a better lunch view. 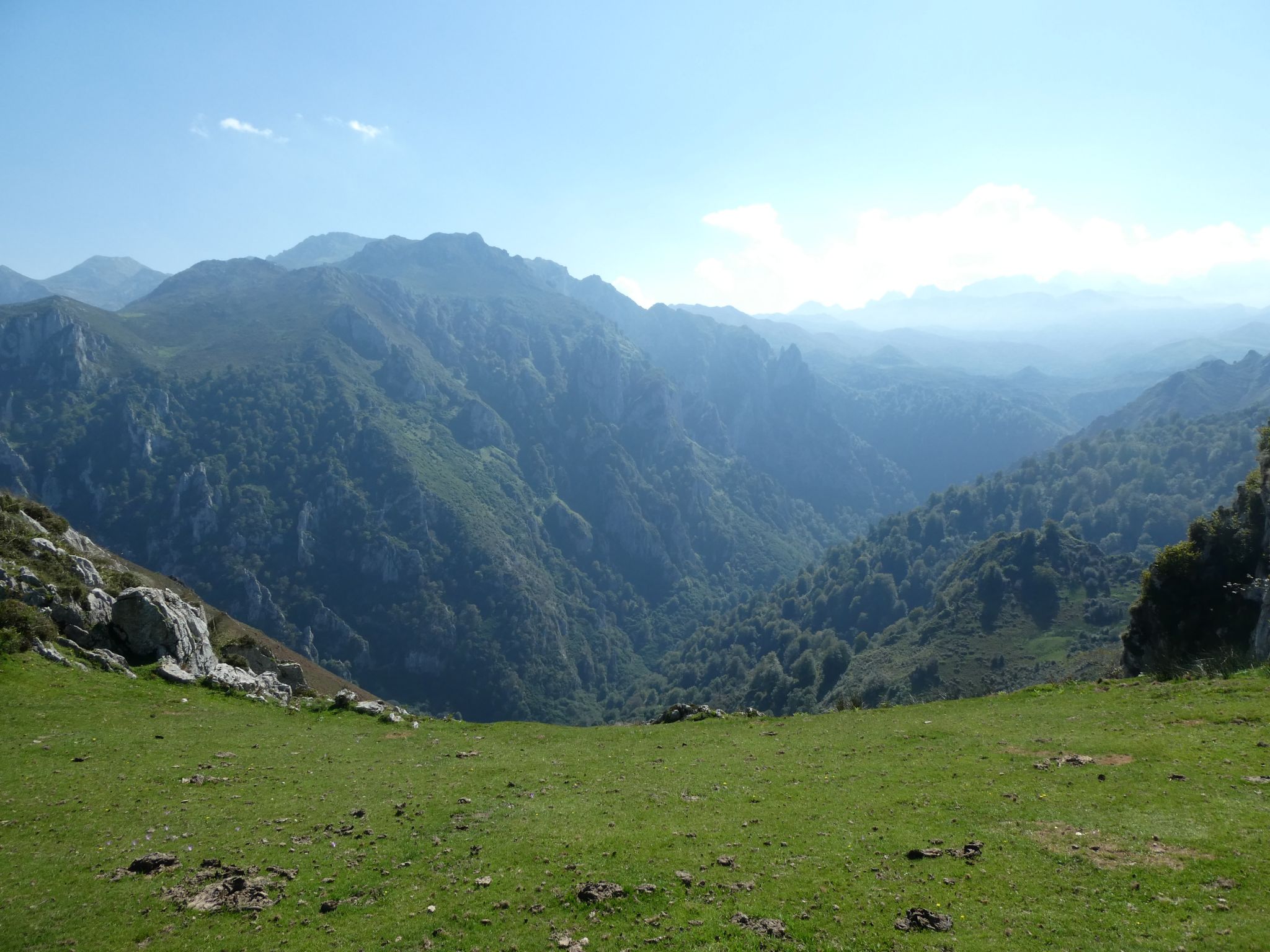 Then another peak, and a very long, hot trudge down, down, down a loose stony path for the next couple of hours.  We’d forgotten to pack the sunscreen and arrived in Bobia de Arriba quite crispy!

Once again, we’d seen no other walkers in the course of the day.  And although much of the walk is across fields, there is a real sense of isolation and remoteness.  Great walking.

Day 4 – Bobia de Arriba to El Allende: Most of this morning’s walk follows a Roman era path which once joined the coast to various communities in the valleys further inland.  It passes through tiny hamlets where ‘horrios’ (traditional wooden houses) are still maintained. 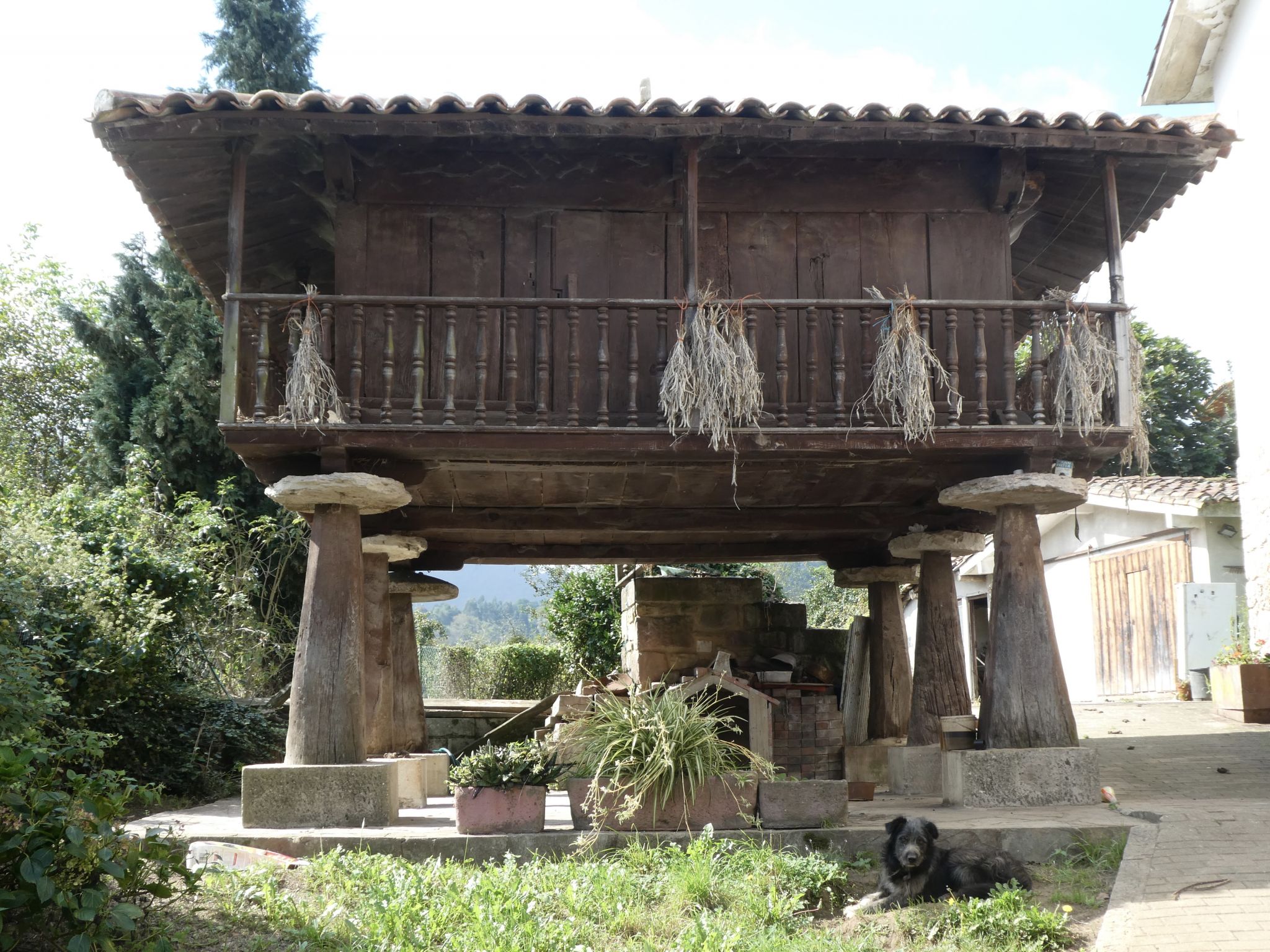 Other hamlets were more modern, always spotless, and some displayed a less traditional artistic flair. 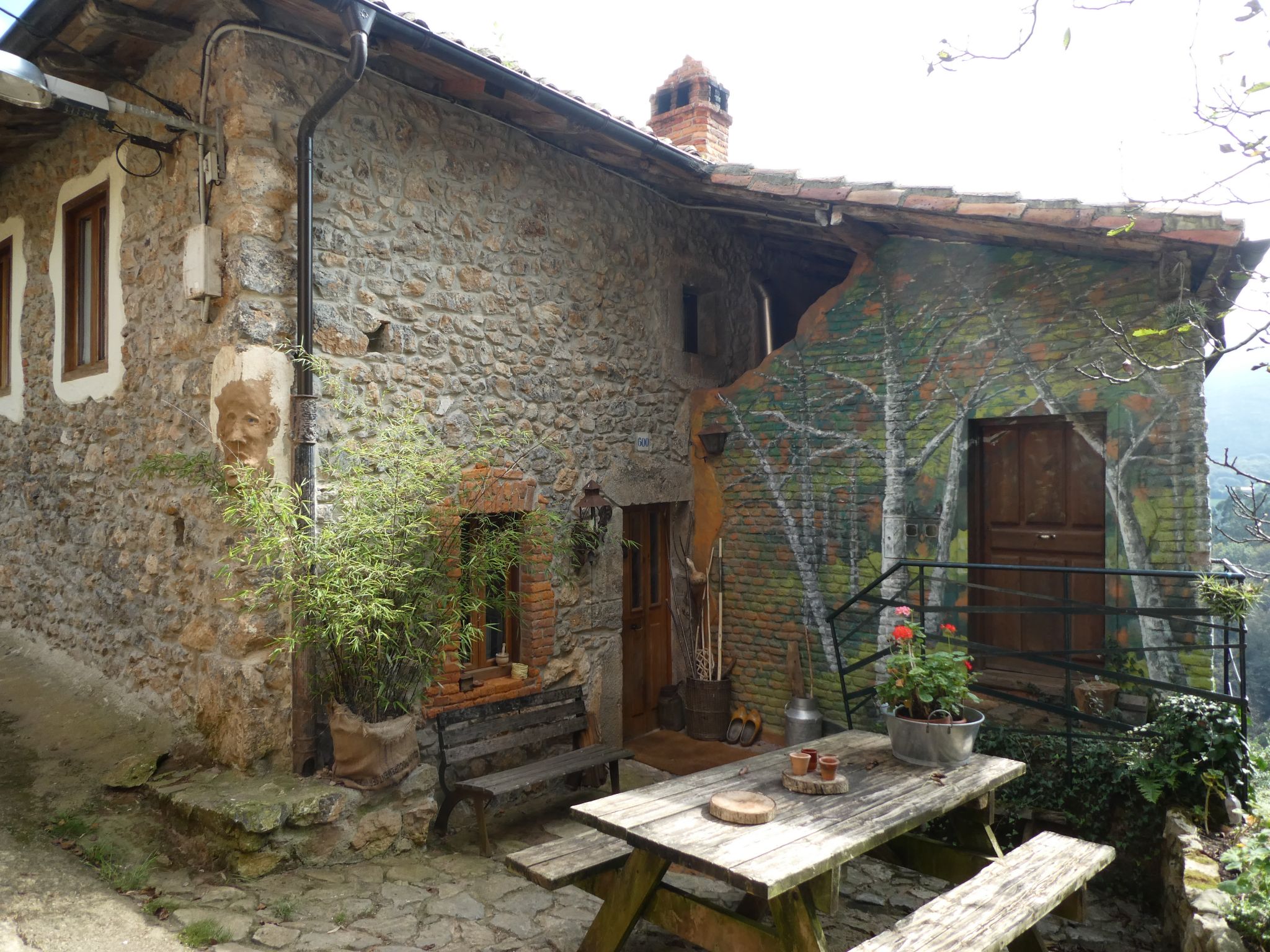 We had been warned to expect rain.  After all, there’s a reason these farms are so green and fertile.  We were lucky and had clear weather for the entire walk, but certainly we could see why this is known as the Costa Verde (Green Coast) of Spain.

Once again, our accommodation for the night was a small, rural hotel with great views and a totally relaxing atmosphere. 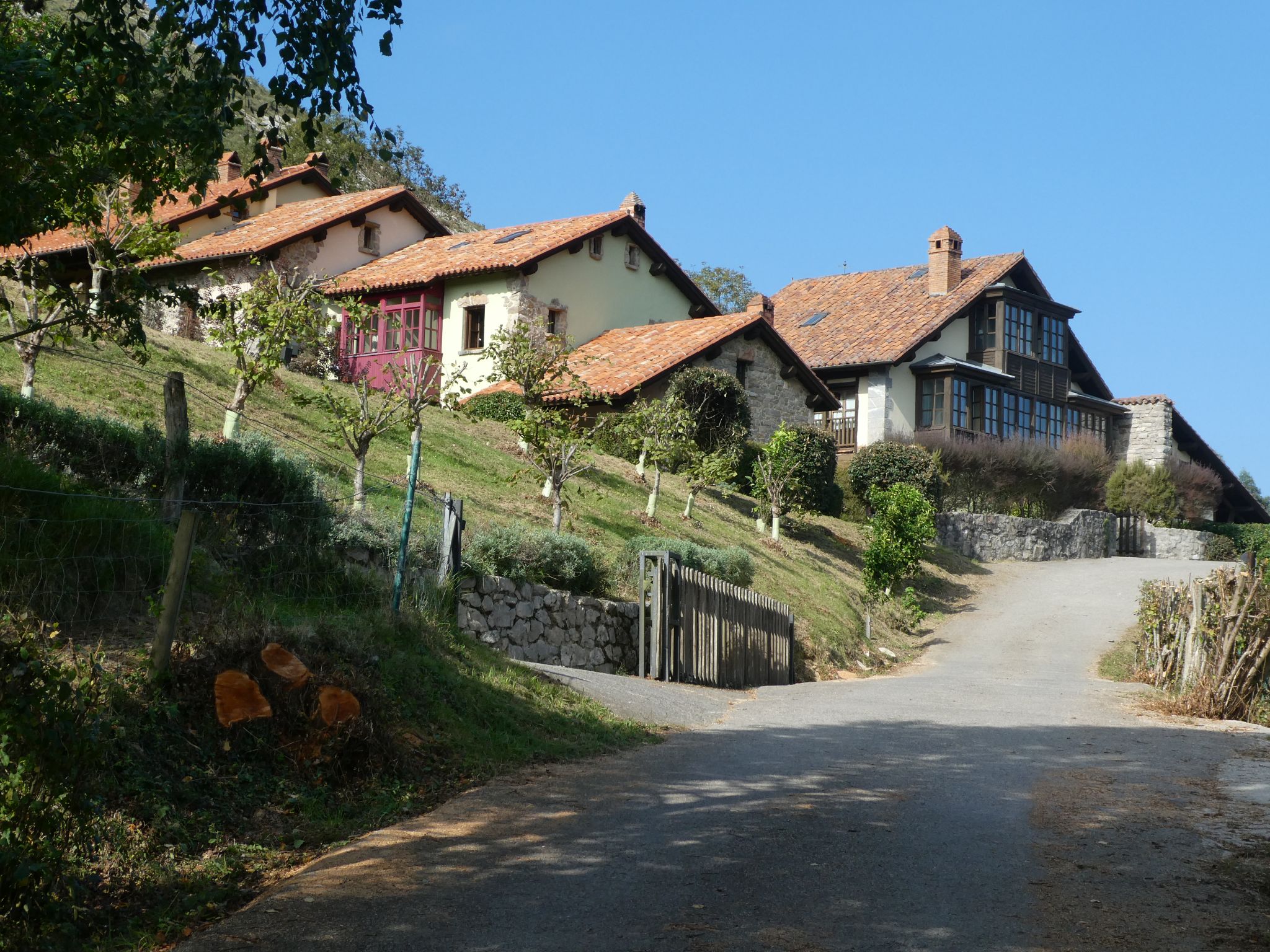 Day 5 – El Allende to La Perada:  We had a few challenges heading out.  After only a few minutes we were fighting our way through shoulder-high brambles, which is less than ideal when you are clad in shorts and t-shirt.

We climbed through a fence into a field with a view to skirting the brambles and re-joining the track further on.  We were shortly confronted by a hostile cow who seemed uncertain whether there was any reason she should share space with a couple of humans.

Then, just before the point we thought we might exit, the fence became electrified.  Our fortunes improved at that point, as the local farmer unhooked the power for us to climb the fence, although we fancied the look on his face suggested he was tempted to leave us to our fate.

Things improved from there.  For a while.  There were further lengthy sessions of inching through bramble thickets.   Brer Rabbits we are not, and nothing stopped us being shredded.

But once we cleared these, we emerged again onto high mountain flanks with visibility so good we could see the coastline and the Atlantic Ocean beyond.  Again a lunch stop with views you couldn’t buy.

From there we headed steadily down. Once we were on the flat again, the track followed country lanes through some little towns that once had their share of colonial wealth. 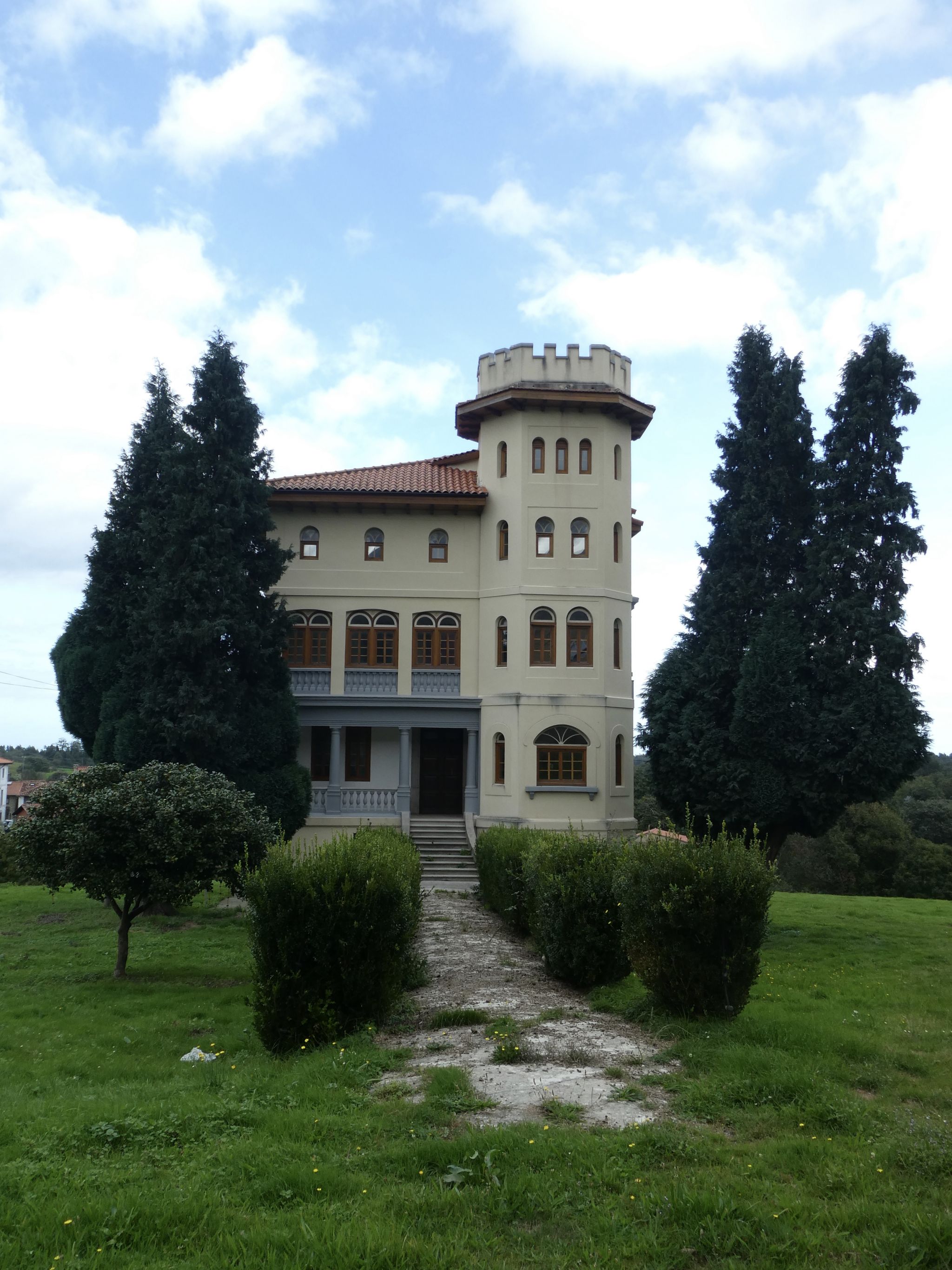 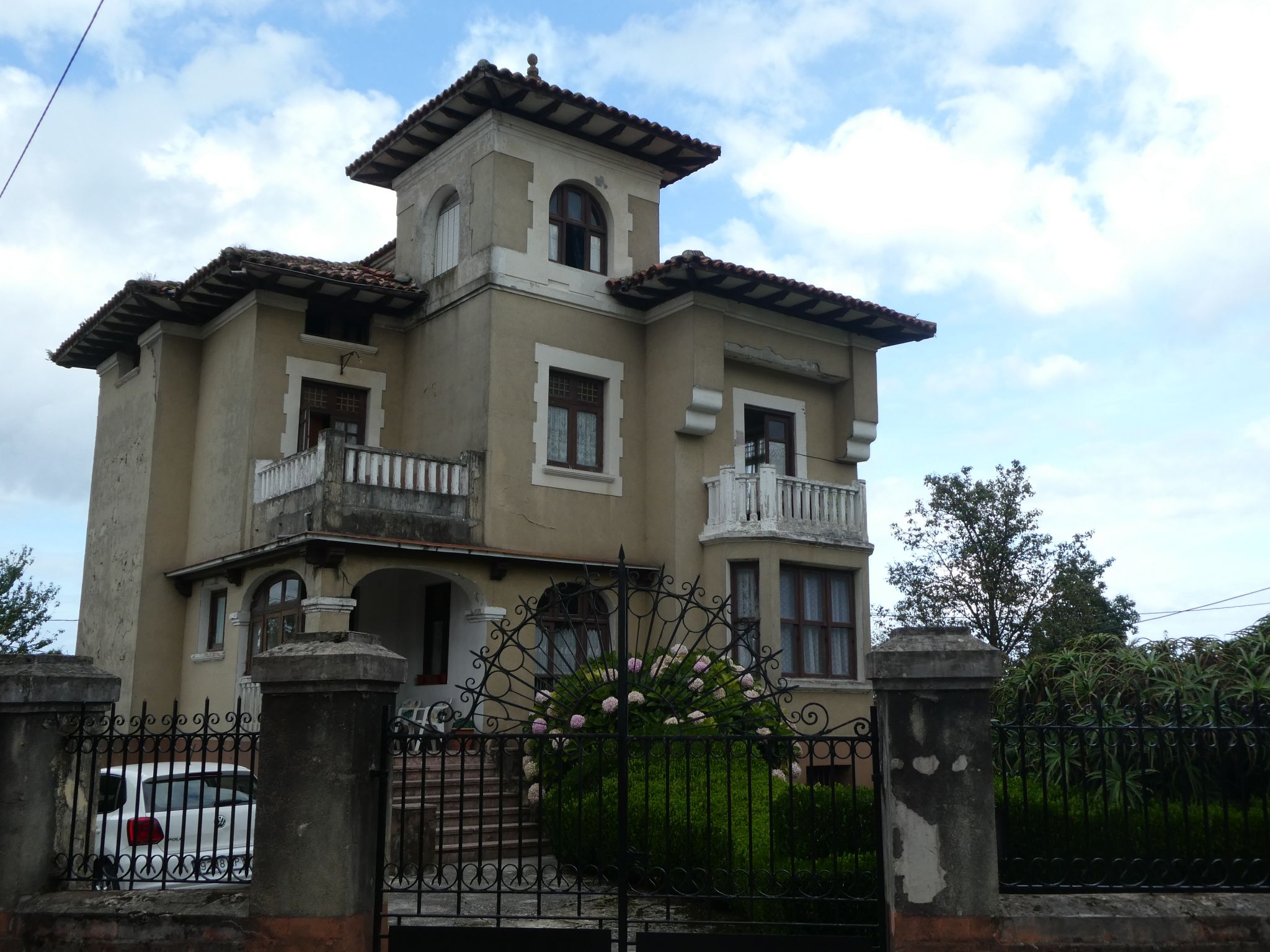 The day’s walk finished in the village of El Allende where we stayed in a very stylish guesthouse just outside the village.  Once again, we’d seen no one on the path all day.  Perfect.

The start of the walk follows a section of the Camino de Santiago, but in the opposite direction.  We saw plenty of walkers marching determinedly toward us, and kept waiting for one to politely tell us we were going the wrong way!

The walk soon headed away from the beach, past a ruined monastery and up to the clifftops. 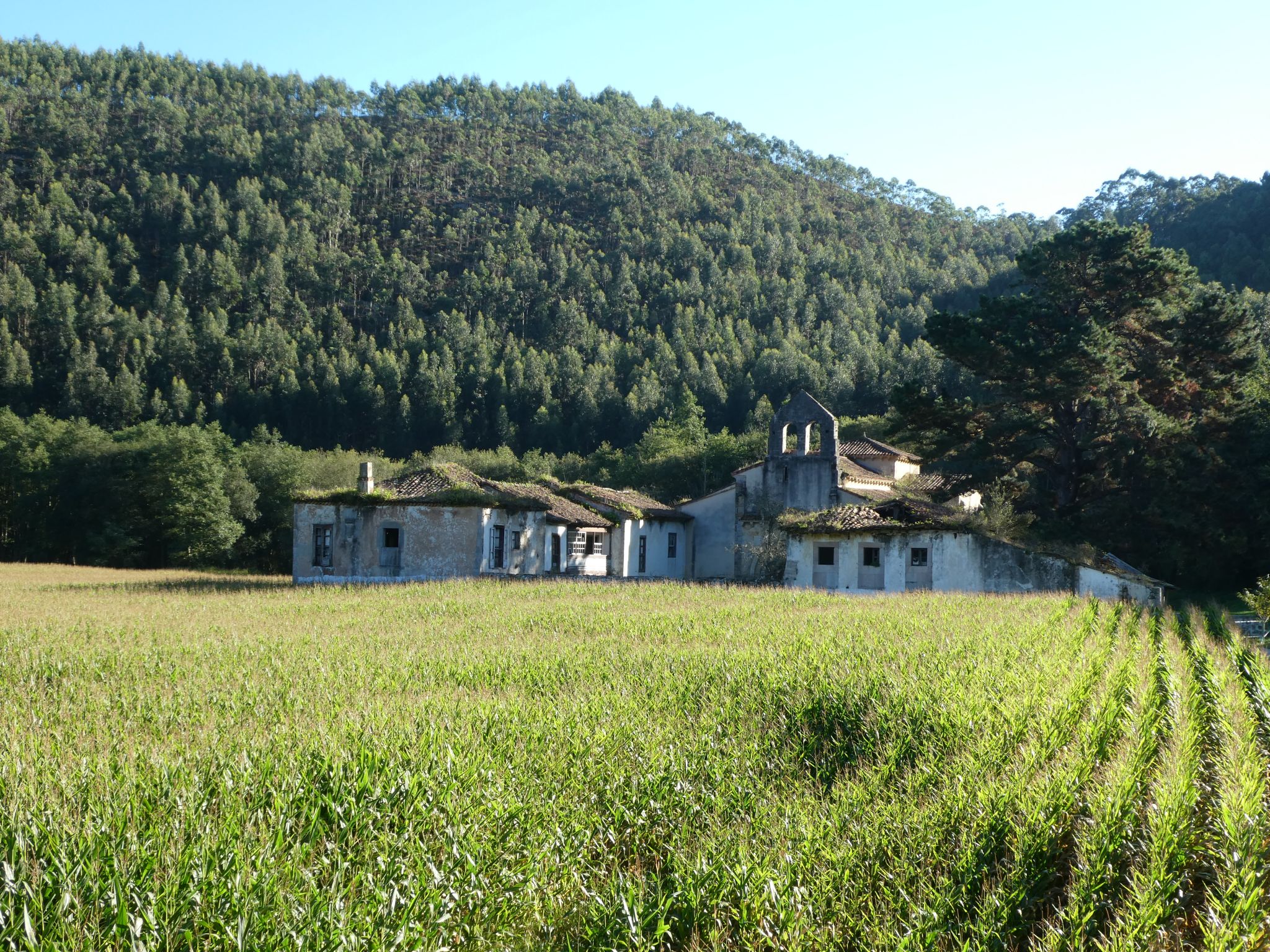 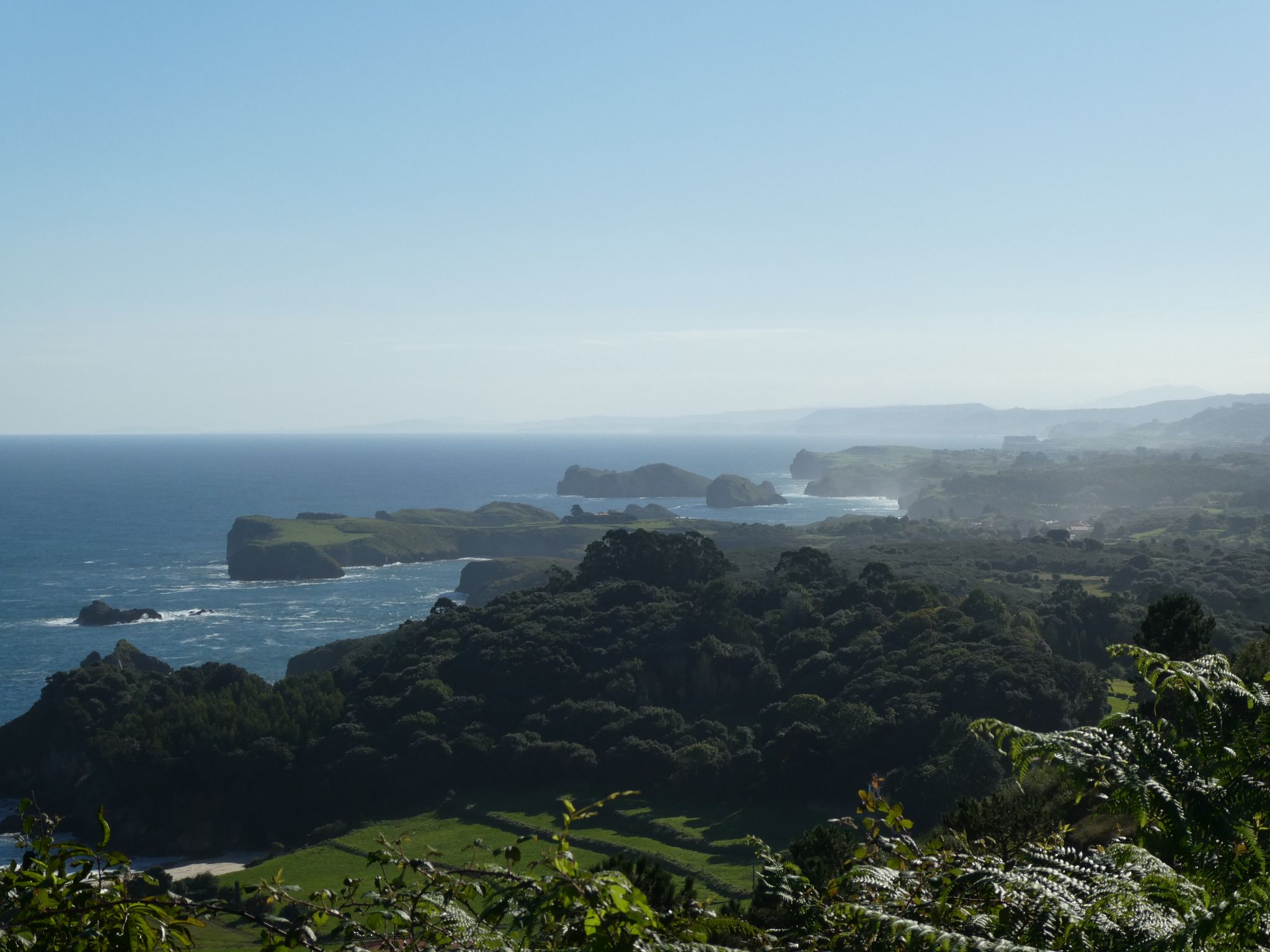 The walk followed the hills along the coast skirting the town of Poo.  No, that is not a typo.  The town is close to the rather attractive, but unfortunately named, Poo Beach. 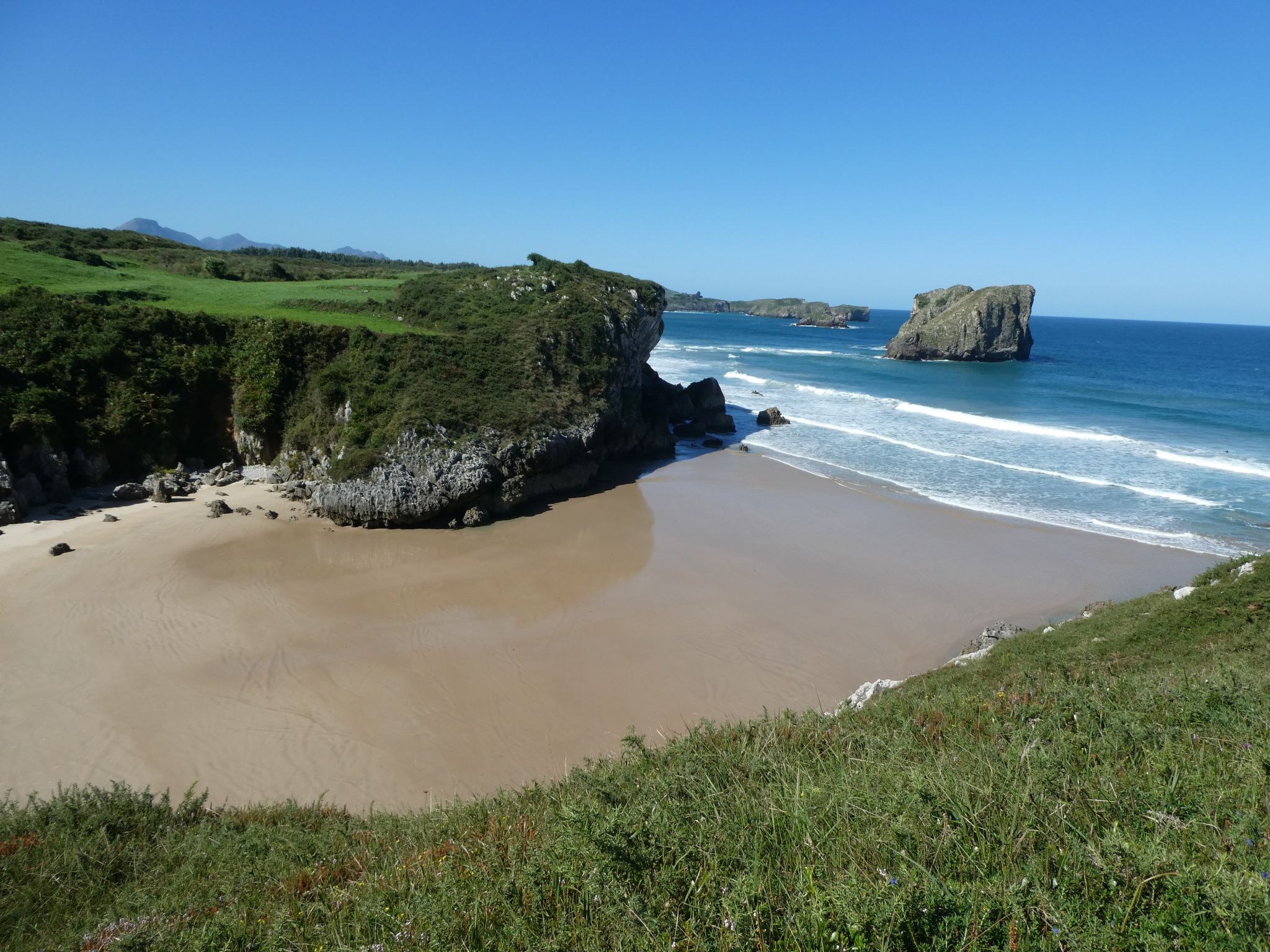 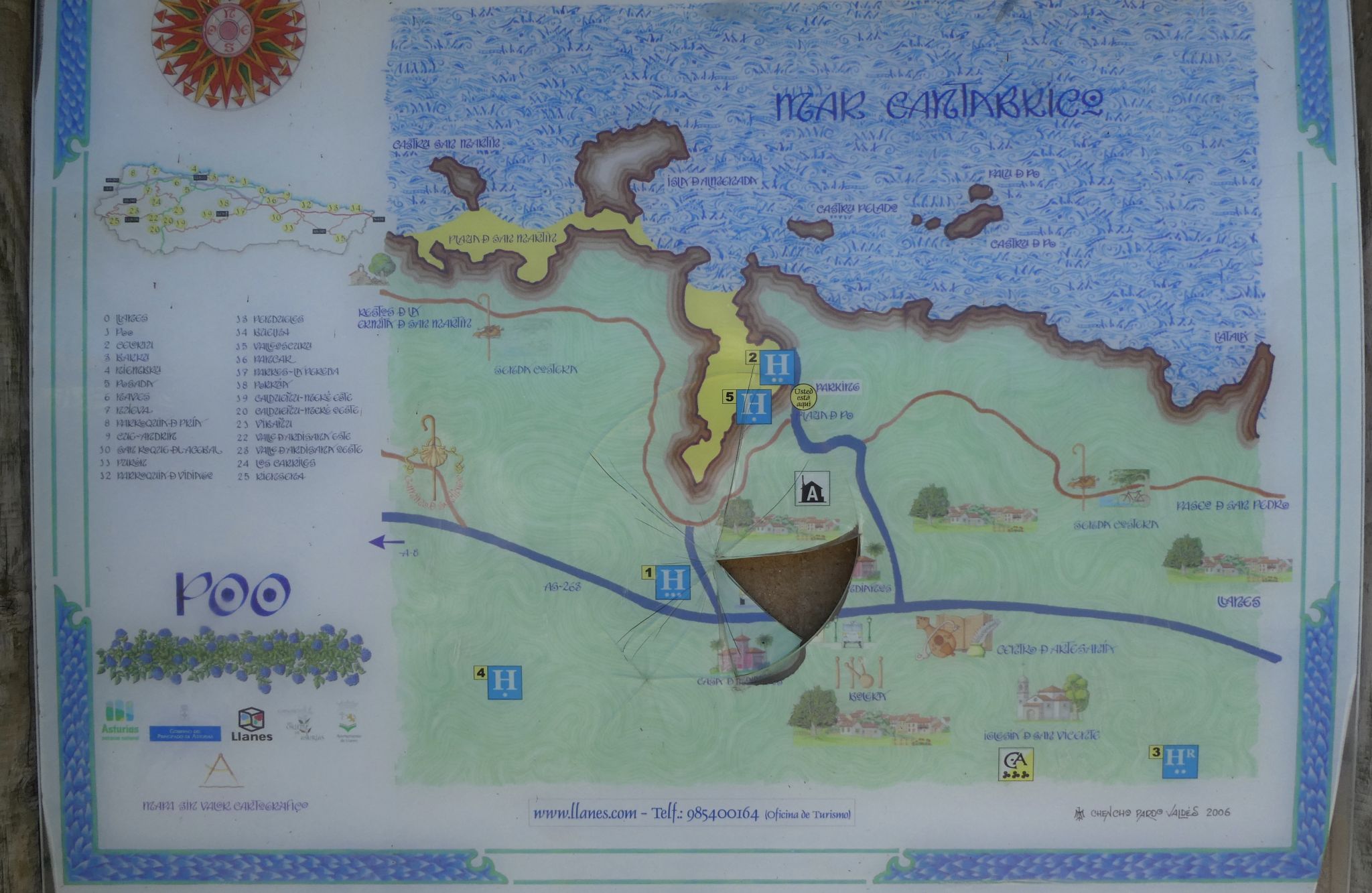 After lunch at Poo Beach, we continued along the coast to the beautiful and historic town of Llanes.  It is a traditional fishing port, with a strong seafaring history.  Three of the ships in the Spanish Armada were fitted out here. 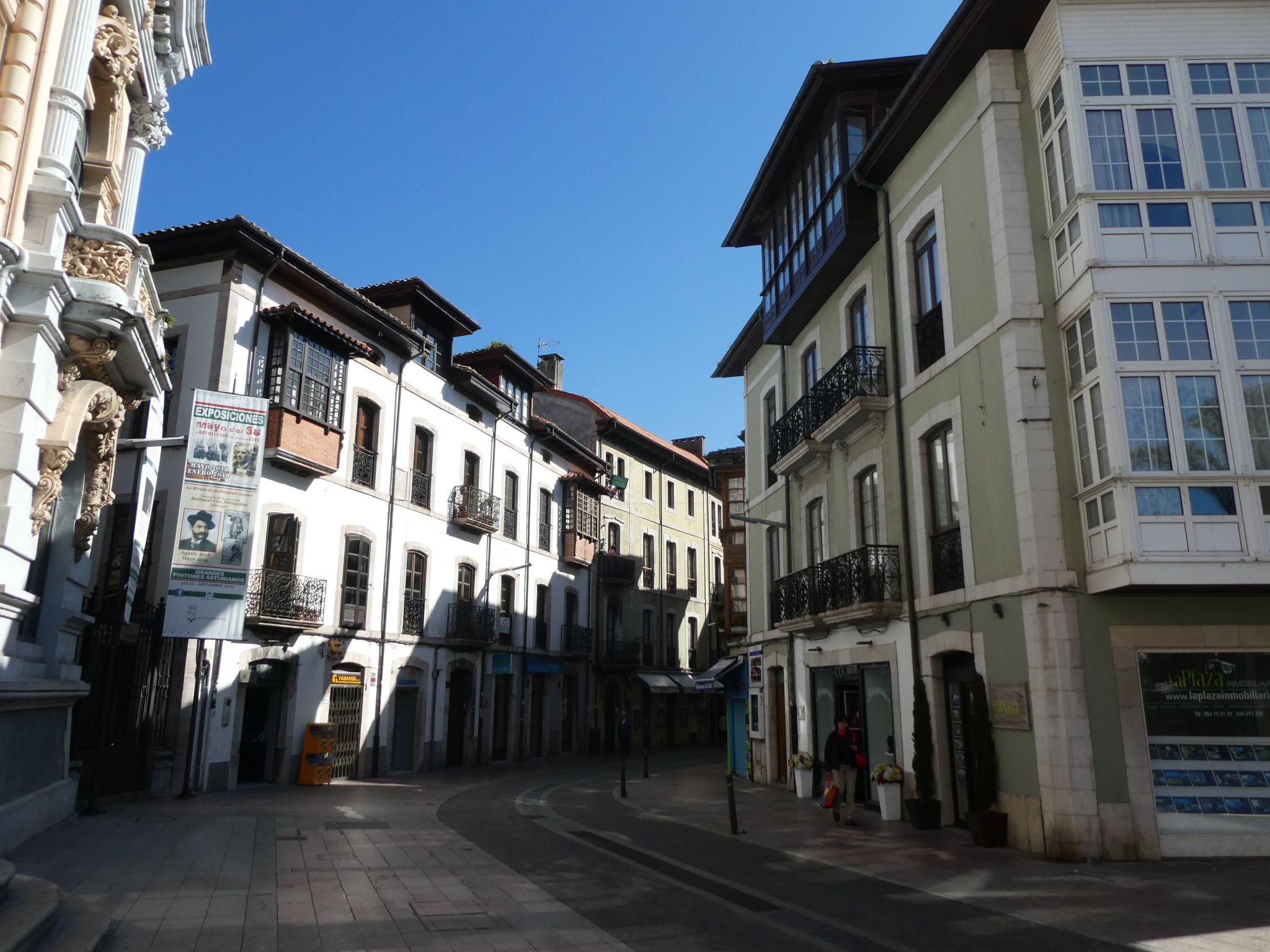 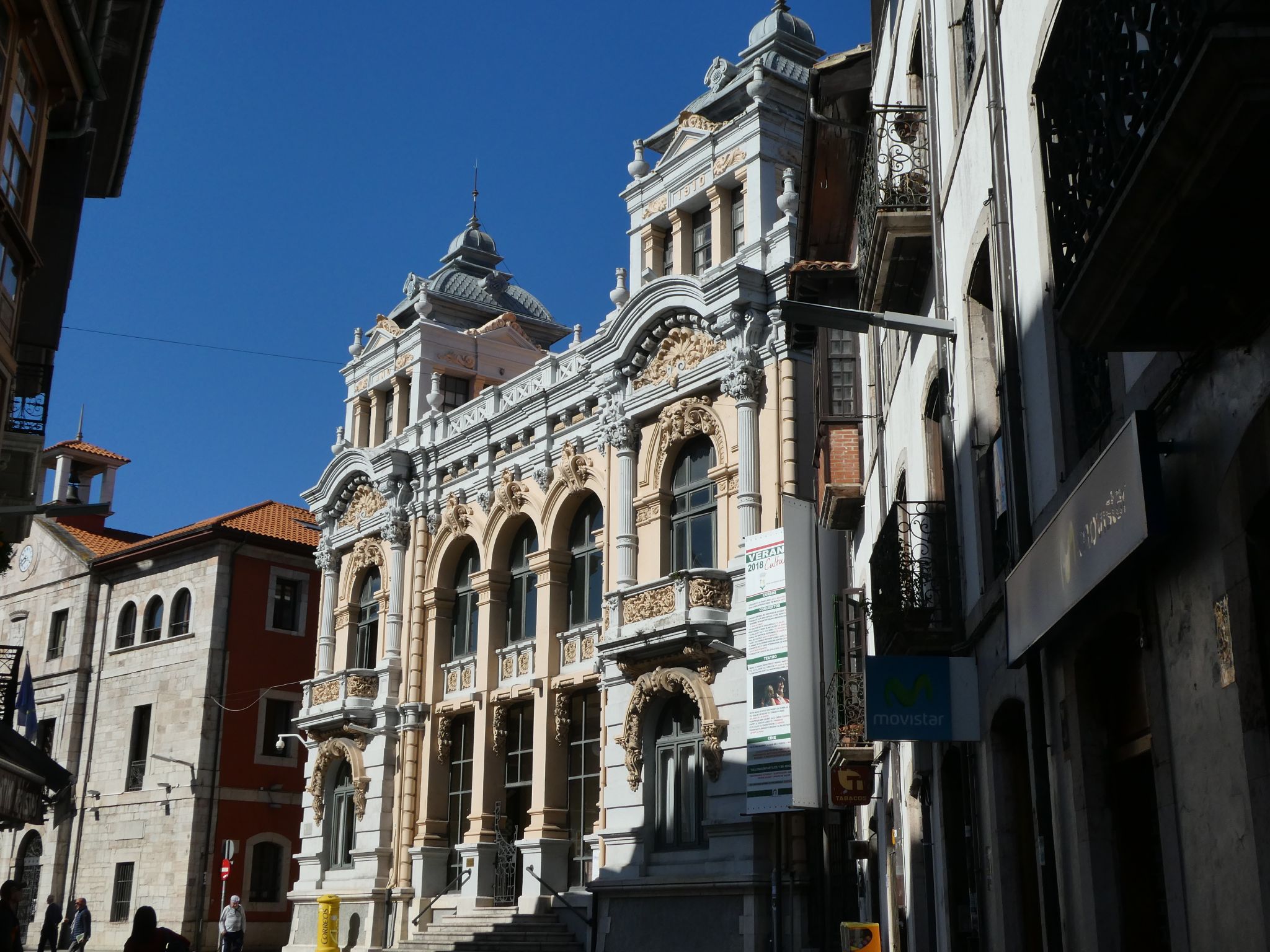 Our walk ended in Llanes and we caught a bus to Santander to continue on to Barcelona.

Wrap up:  A beautiful walk with a satisfying mix of unspoilt mountain scenery, picturesque rural farms and villages, and exquisite coastal walking to finish.  The distance and level of challenge were right for us, and evenly balanced over the six days.  We arranged the walk through Inntravel, a UK based holiday company specialising in ‘slow travel’.  The track notes they provided were the best we’ve had over several walks in Europe, and logistics worked seamlessly.  We would certainly recommend them.

Now, off to Barcelona for some more pintxos.