Fez was our first stop in Morocco, but having visited a number of other Moroccan cities before writing this post, we can say that as well as holding all those records, the medina in Fez would be a contender in any ‘most interesting medina in Morocco’ competition.

The medina was built in the 8th century, but most of its iconic structures were built in the 13th century.   It’s fortunes waxed and waned over the centuries but the medina has remained virtually unchanged.  Within its walls is a tangle of 9,000 narrow alleys ribboning through souks, workshops, cottage industries, mosques and residential areas.

High on the list for any visitor is the Chouara Tannery.  In continuous use since the 11th century, and using methods unchanged since that time, the tannery is where hides of cows, sheep, goats and camel are processed into leather.  The hides are first soaked in a series of white liquids made from mixtures of cow urine, pigeon faeces, quicklime, salt and water to clean and soften the skins.  They are then dyed using natural colorants from poppies, indigo and henna.   The entire process is performed manually, with no modern machines used.

The tannery is surrounded by workshops where the processed leather is used to make bags, coats, belts and shoes, and stalls and shops selling the finished products.  Many of these have upstairs storerooms on which a balcony has been hung overlooking the tannery.  Tourists are invited to view the tannery and then encouraged to buy some goods.  It’s reputed to be hard sell, but actually we found it rather soft.

The smell from the tannery is utterly unique.  ‘Pungent’ does not begin to describe the mix of whatever animal residue remains on the unprocessed hides and the fetid concoctions in which they are brewed.   The shop owners hand out bunches of mint to hold under your nose when viewing the tannery and really, you wouldn’t stay long without it!  Fascinating to watch, and almost unbelievable that theses guys can work in these conditions. 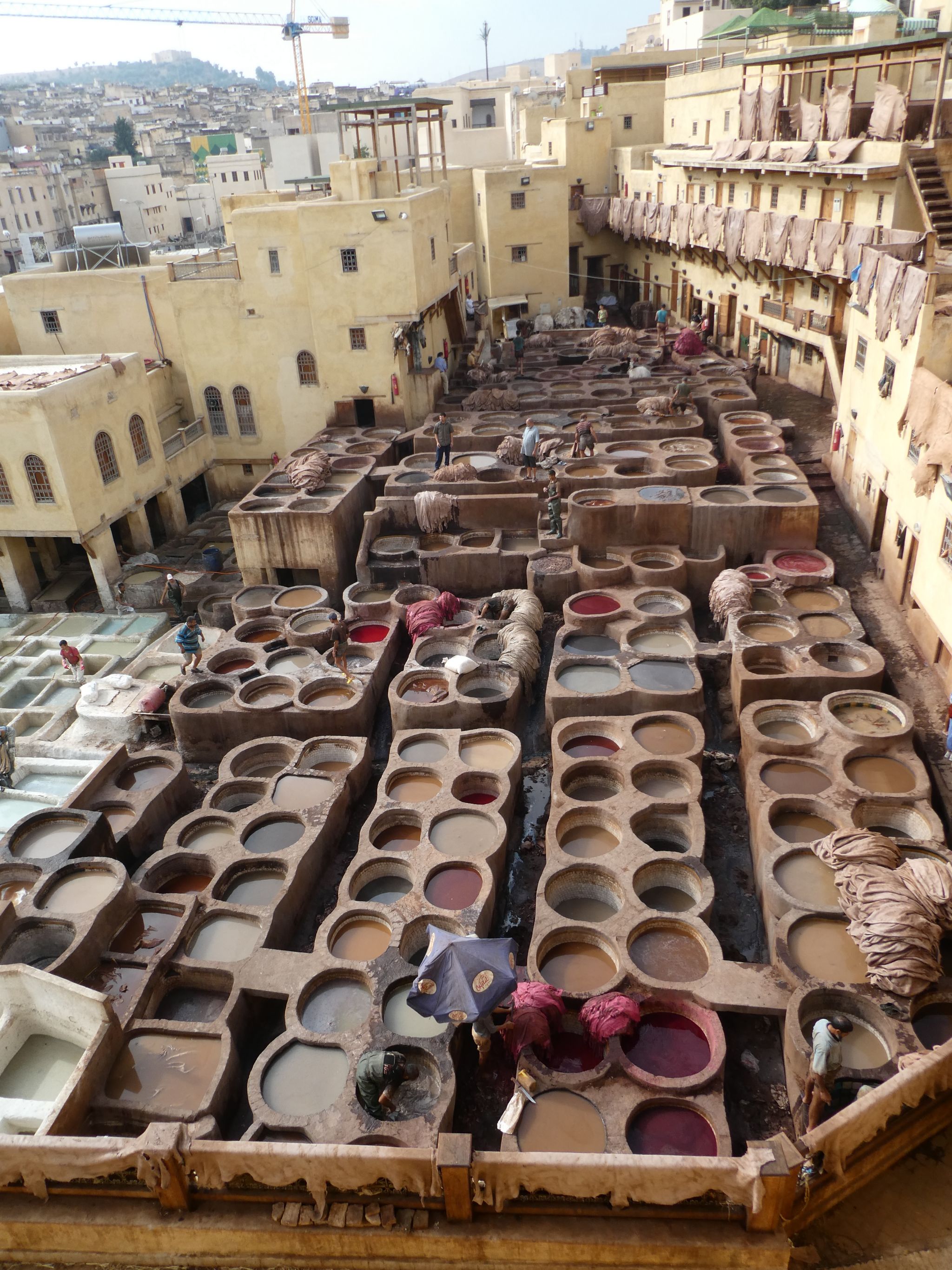 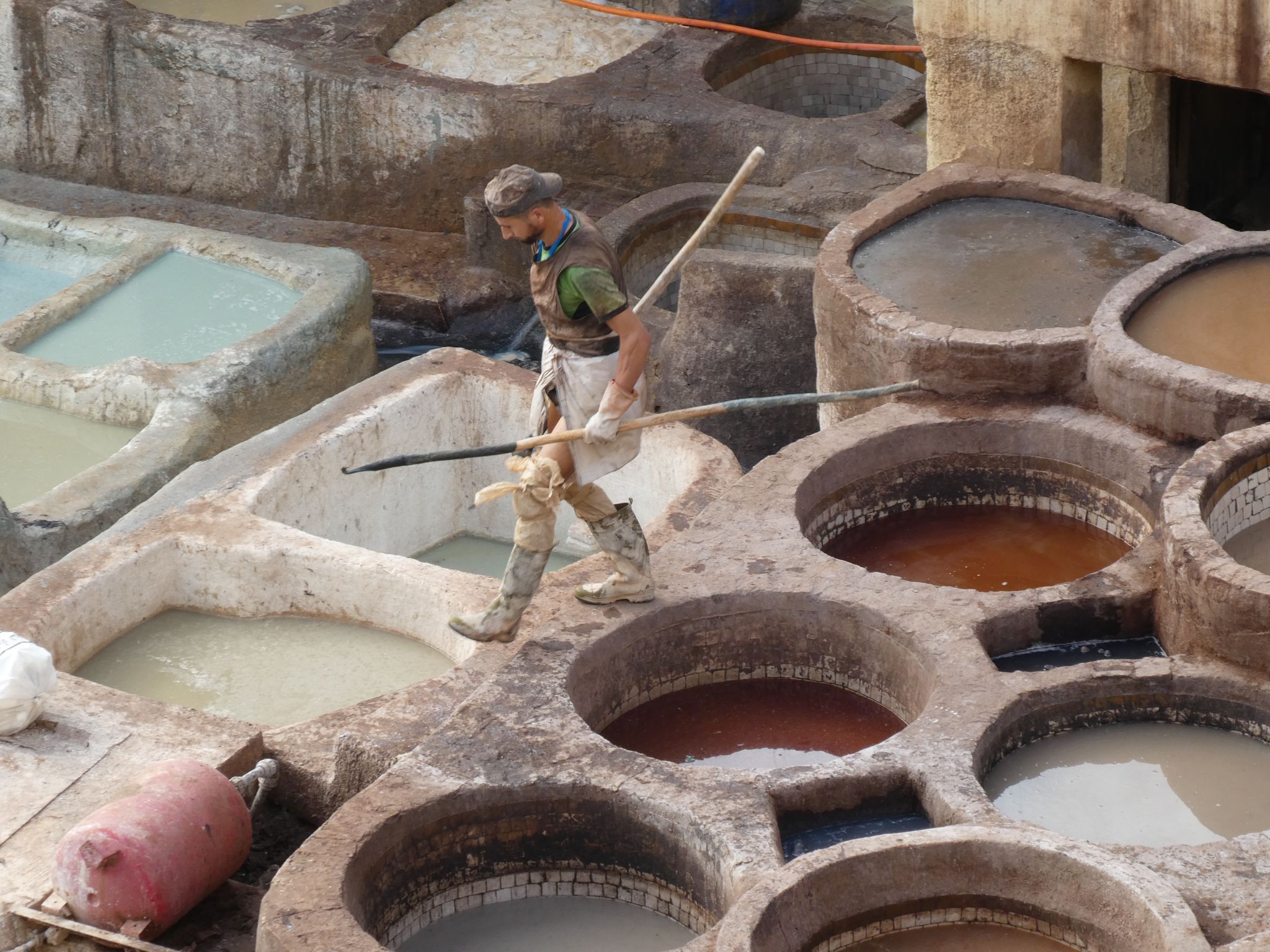 Diving down into the network of souks, there are areas dedicated to just about everything needed for daily life.

The henna souk sells cosmetics based on henna and argan oil.  Argan oil is Morocco’s miracle product.  It is the essential ingredient in anti-wrinkle cream, eczema cream, cosmetics, massage oil and hair products.

In liquid form it is believed to reduce cholesterol and prevent atherosclerosis.  In cooking it is used in the same way as olive oil.   Mixed with ground almonds and honey it becomes amlou, which is believed to be an aphrodisiac.

But before you race out looking for some, consider how it is made.  Women harvest the fruit of the argan tree, which thrives in the extreme temperatures of southern Morocco, and feed it to goats.  Goats love this fruit and will even climb the argan trees to get to it.  The goats’ digestive juices dissolve the hard shell of the nuts within the fruit but the nuts pass through.  The women then collect the nuts from the goat dung, and the nuts are split and pressed for the oil.

You really have to wonder who first thought of digging a nut out of a goat’s droppings and rubbing it on their skin.

There are souks for brassware, clothing, shoes, fabric and so on. 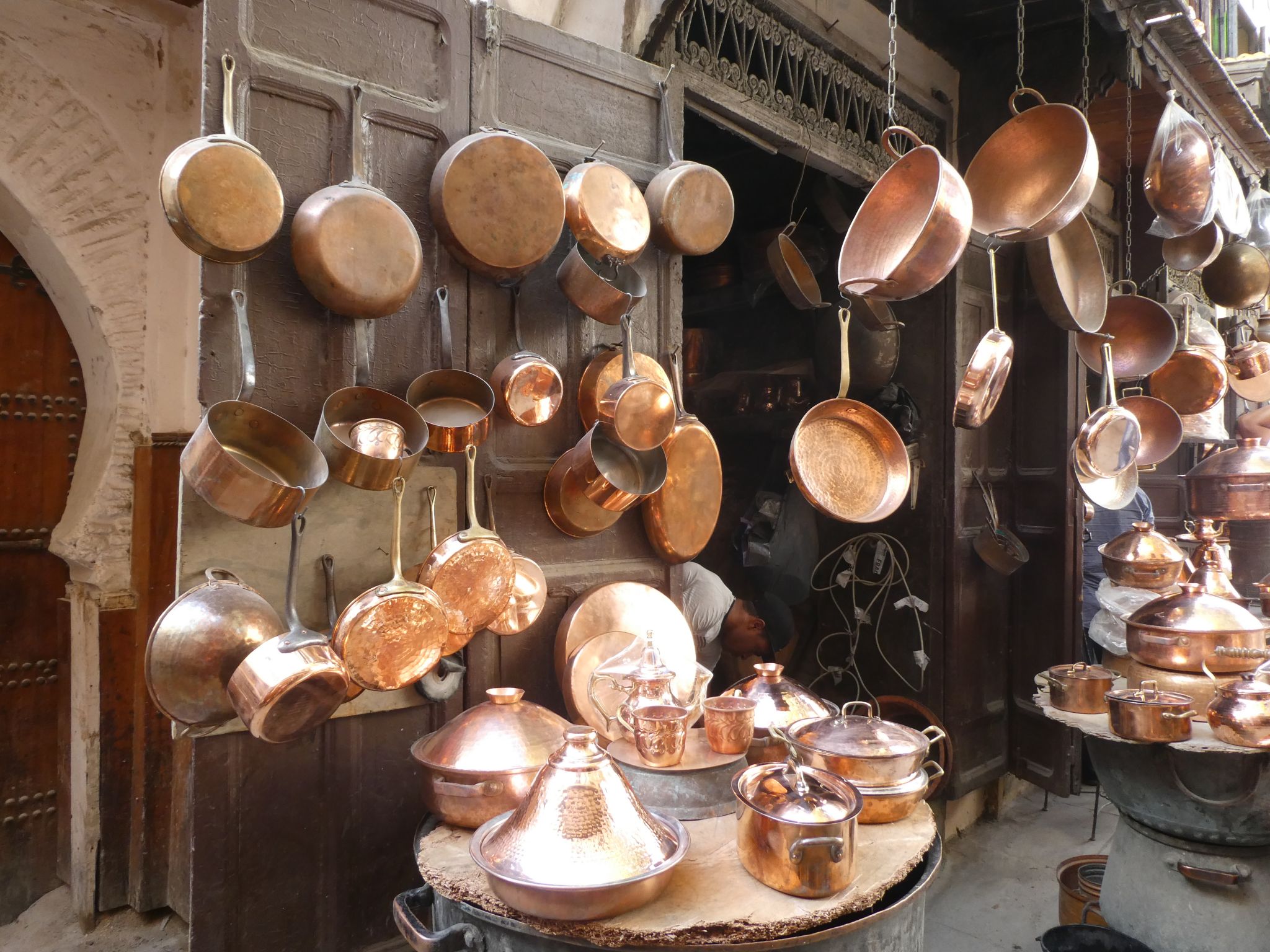 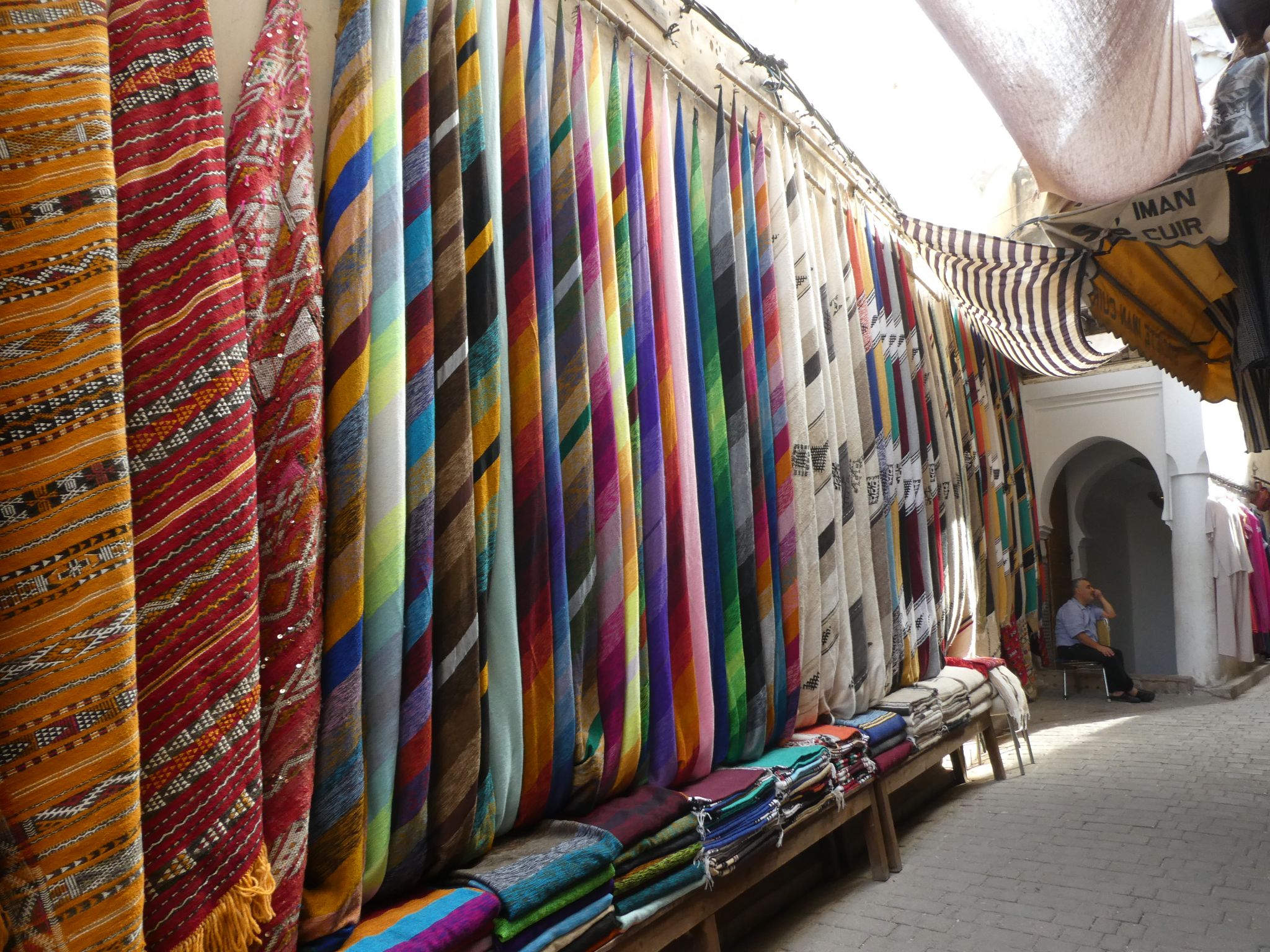 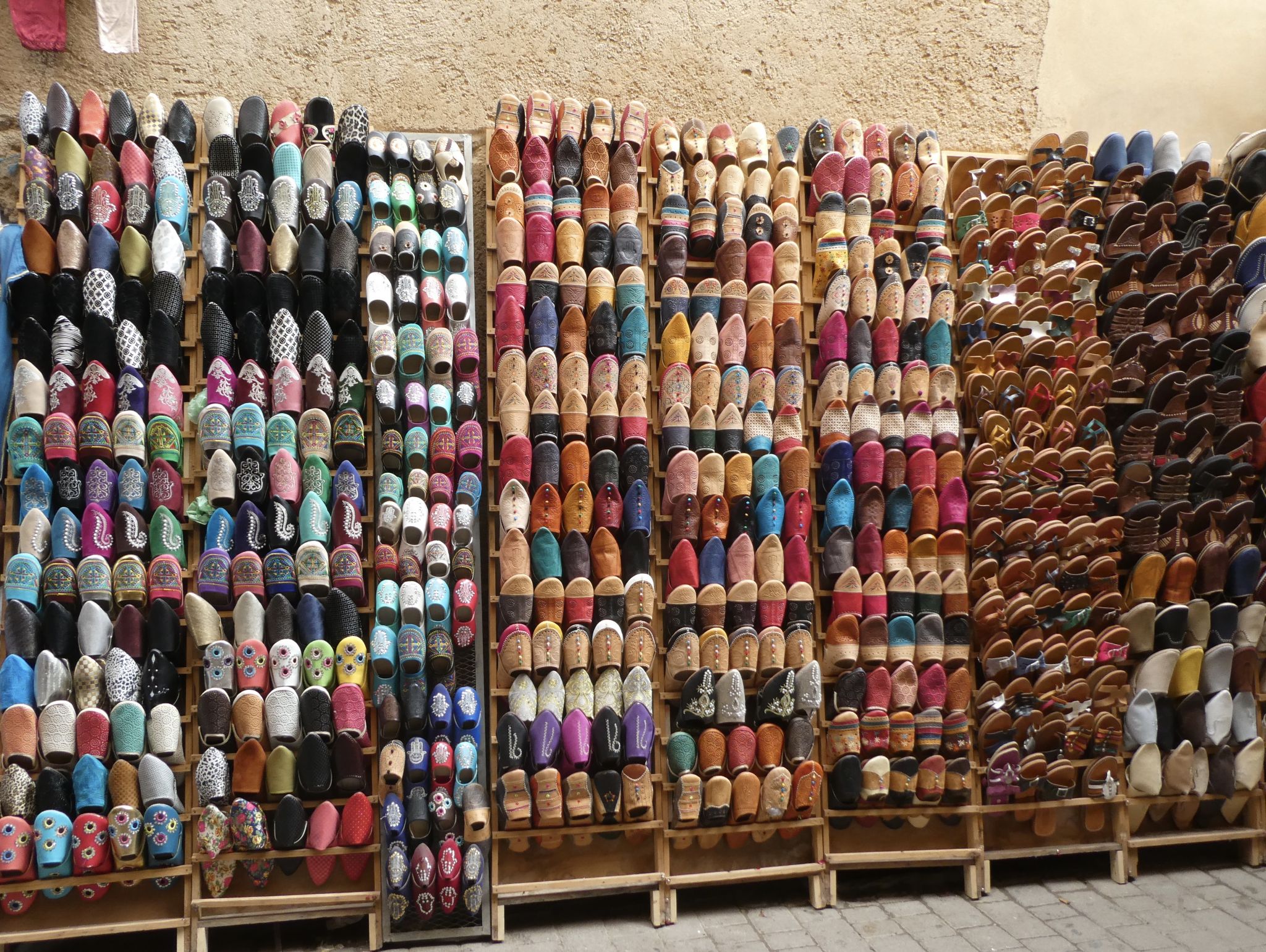 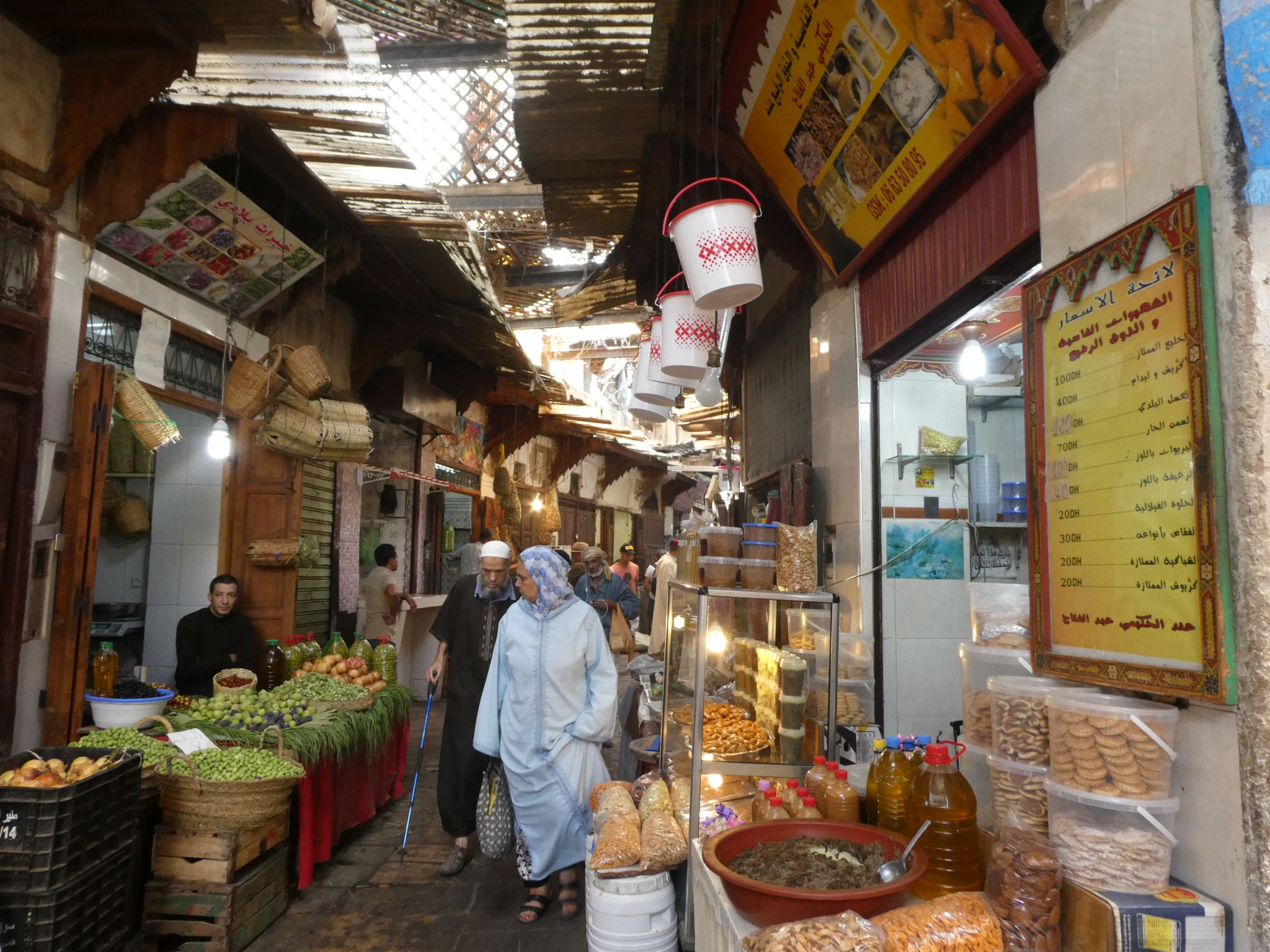 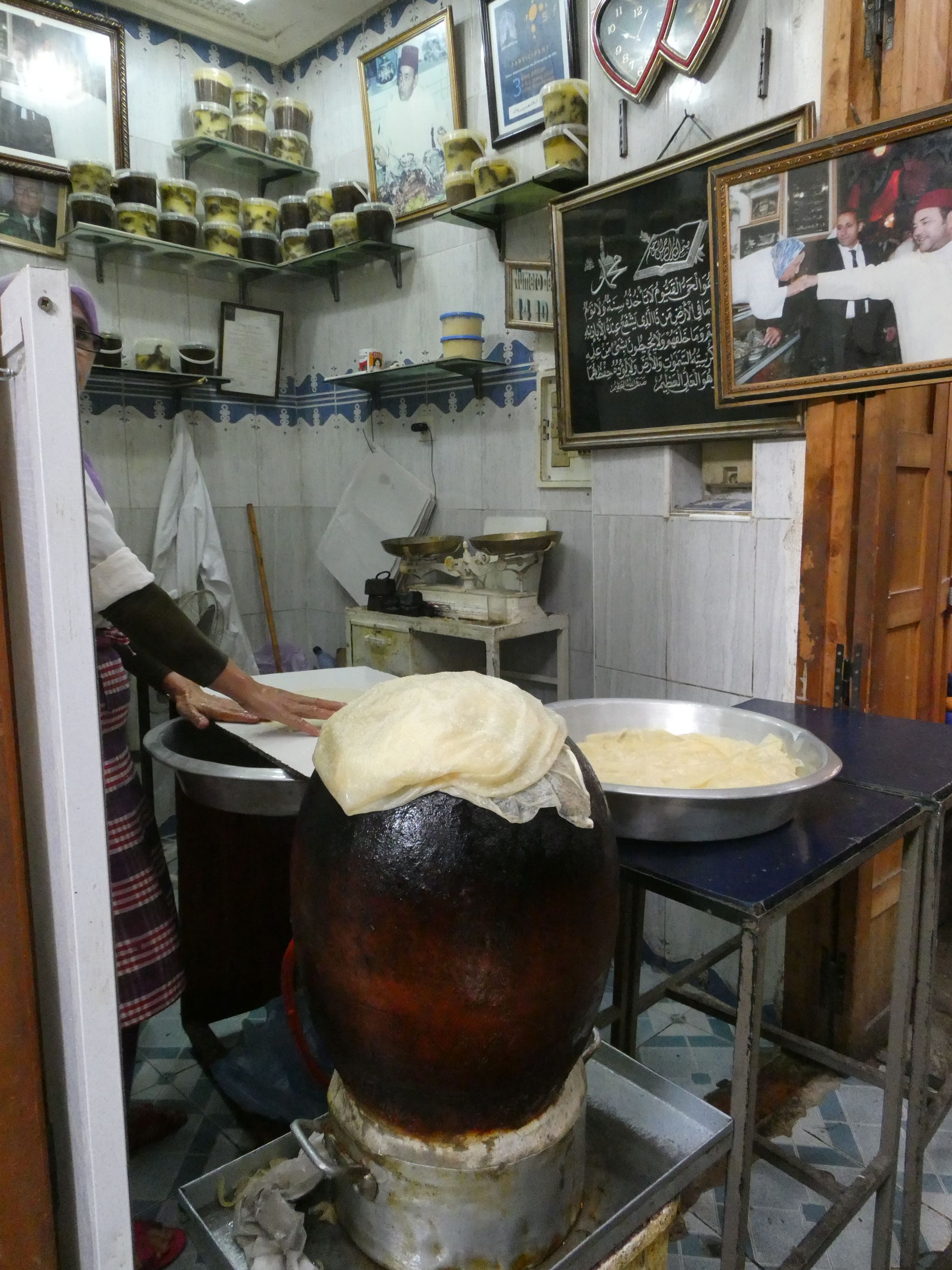 There’s lots of cats hanging around the butcher shops.  More on the Moroccan cats in a later post, but here’s a preview. 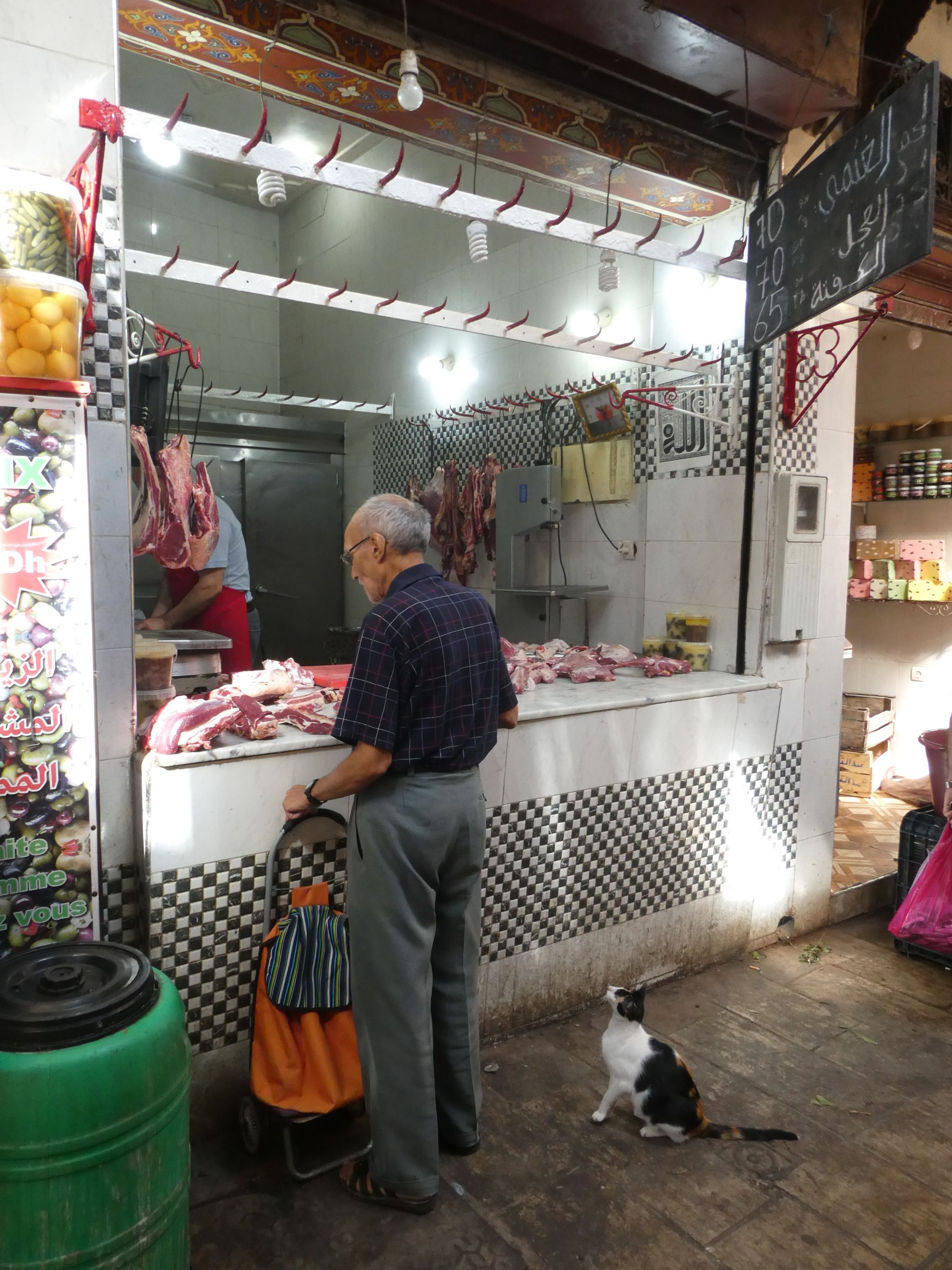 There are more than 60 water fountains in the medina, many of them paid for by wealthy merchants and princes in the days when individual homes and businesses did not have their own water supply.  Some of the fountains have been disconnected with the installation of private plumbing in the section of the medina they had served, but many are nonetheless beautifully maintained. 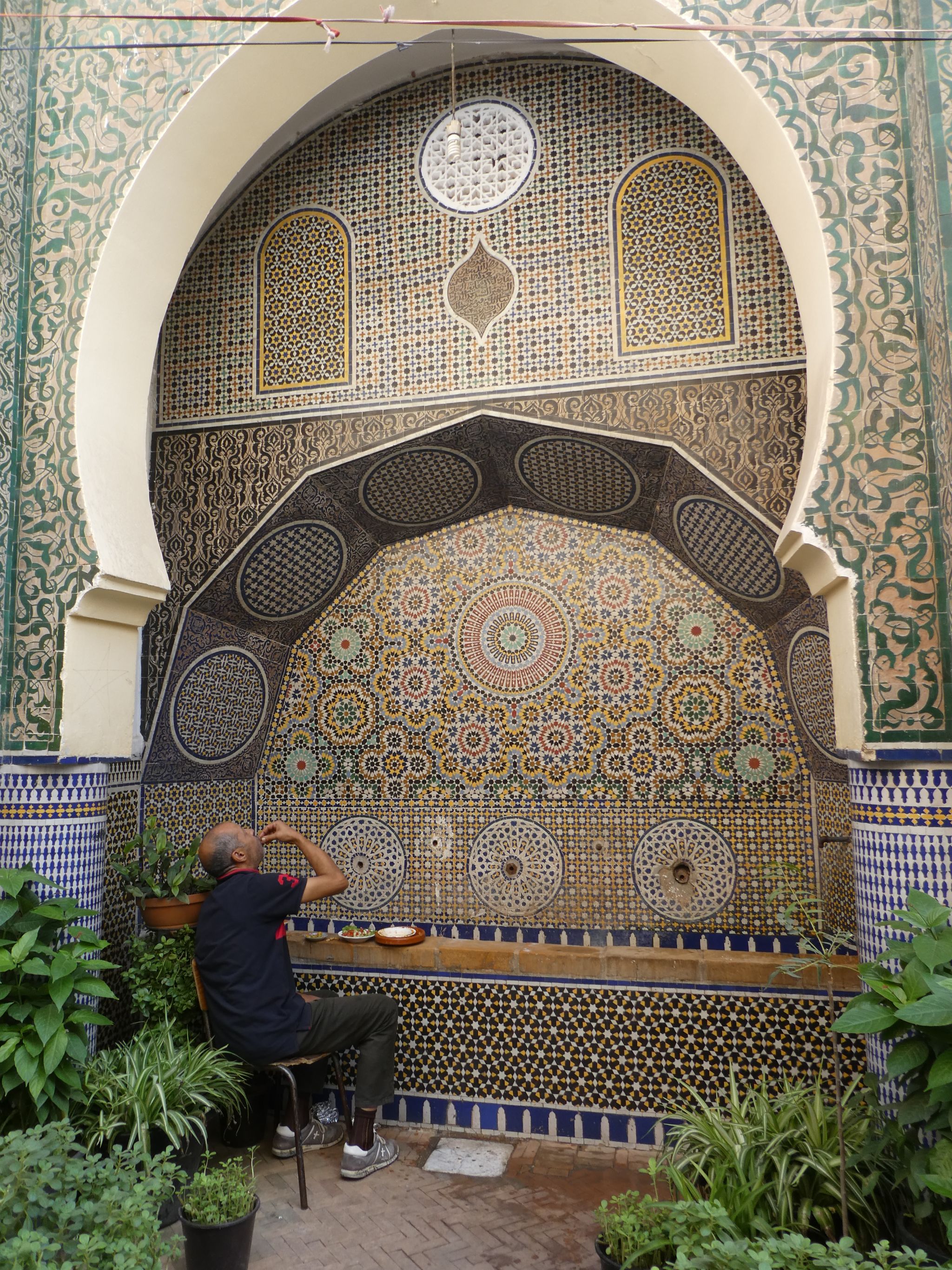 The medina is vehicle-free, and can never be otherwise because many of the lanes are narrower than a car-width, and random steps render motorbikes impractical.  Goods are carried by hand or transported by guys pushing carts or by donkeys.

The currency in Morocco is the dirham.   We weren’t sure if this guy was trying to get a money transfer or whether he IS the Dirham Express. 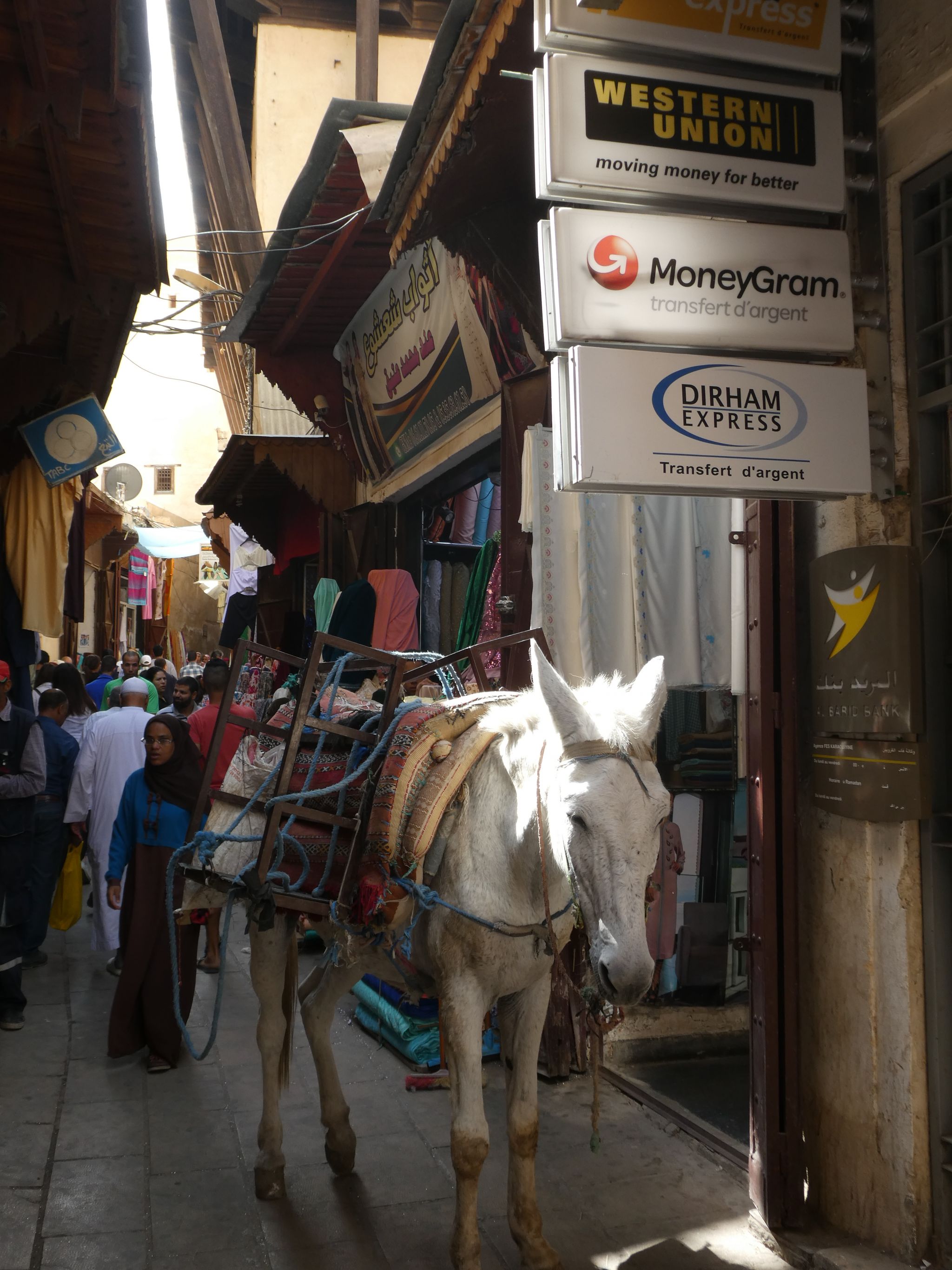 Buried within the medina is Zaouia Moulay Idress II, containing the tomb of Moulay Idris II who ruled Morocco in the 800s and is considered the founder of Fez.  Non-Muslims cannot enter but are allowed to take a look from the lane outside. 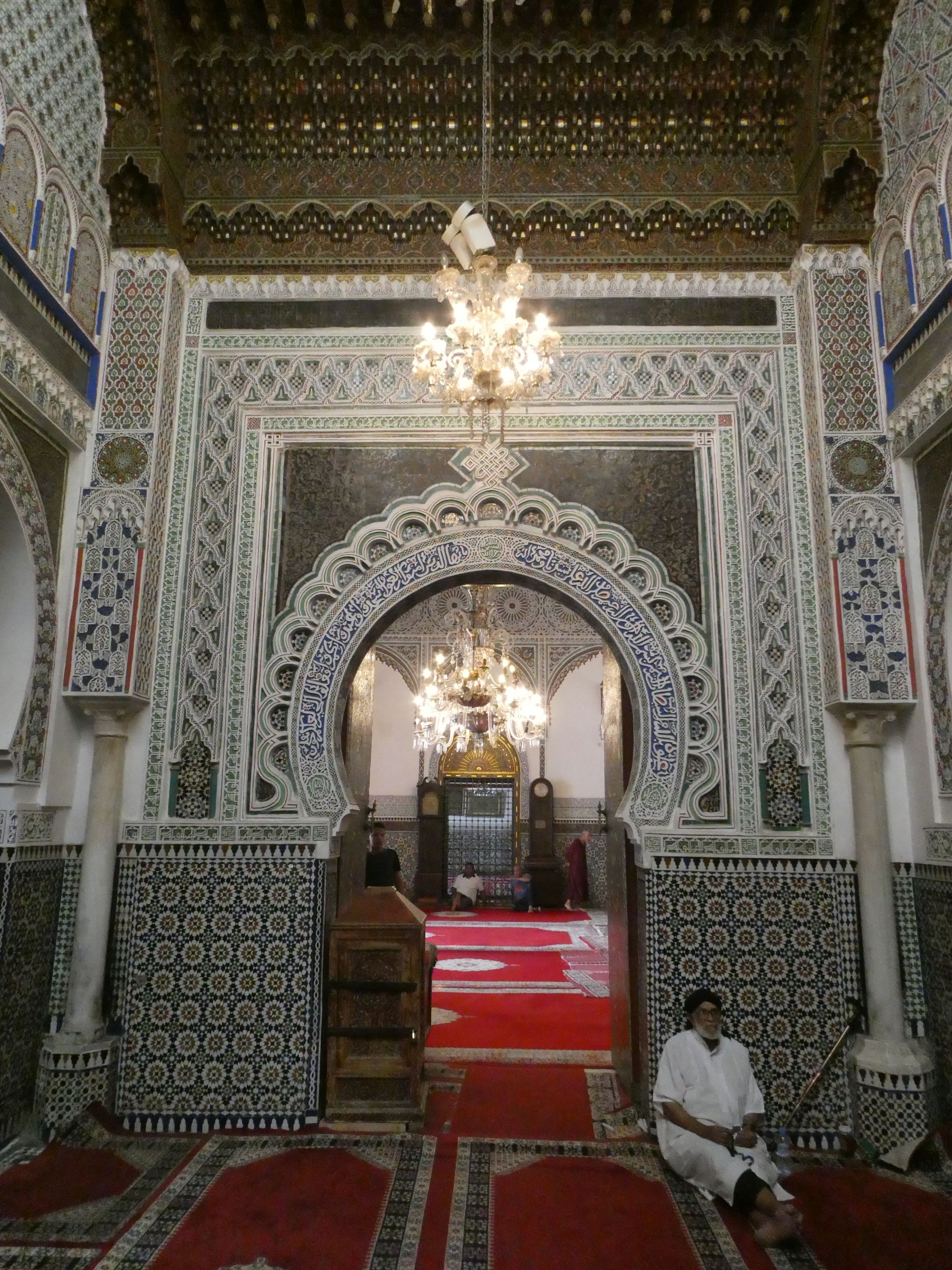 Nearby is the Bou Inania Merdesa, an Islamic school built in the 1350s.  It was extensively restored in the 1800s and again in the early 2000s and has beautiful wood and marble work. 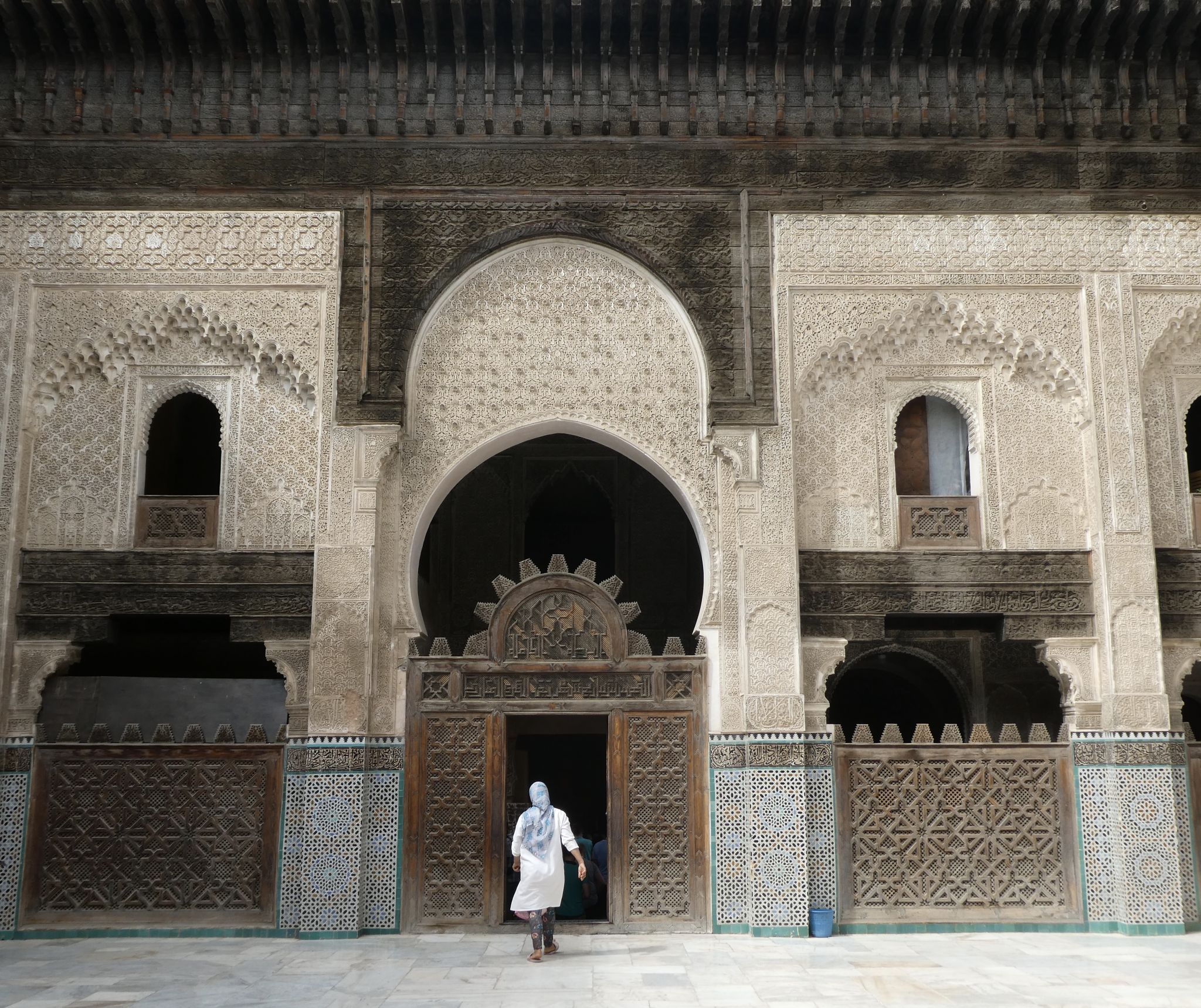 Opposite the Merdesa is the Magana hydraulic clock, constructed as part of the Merdesa.  It is the only hydraulic clock of its era still in existence anywhere in the world.  It is currently not operational but work is being done, based on study of contemporary texts to understand how it worked, to restore its functionality. 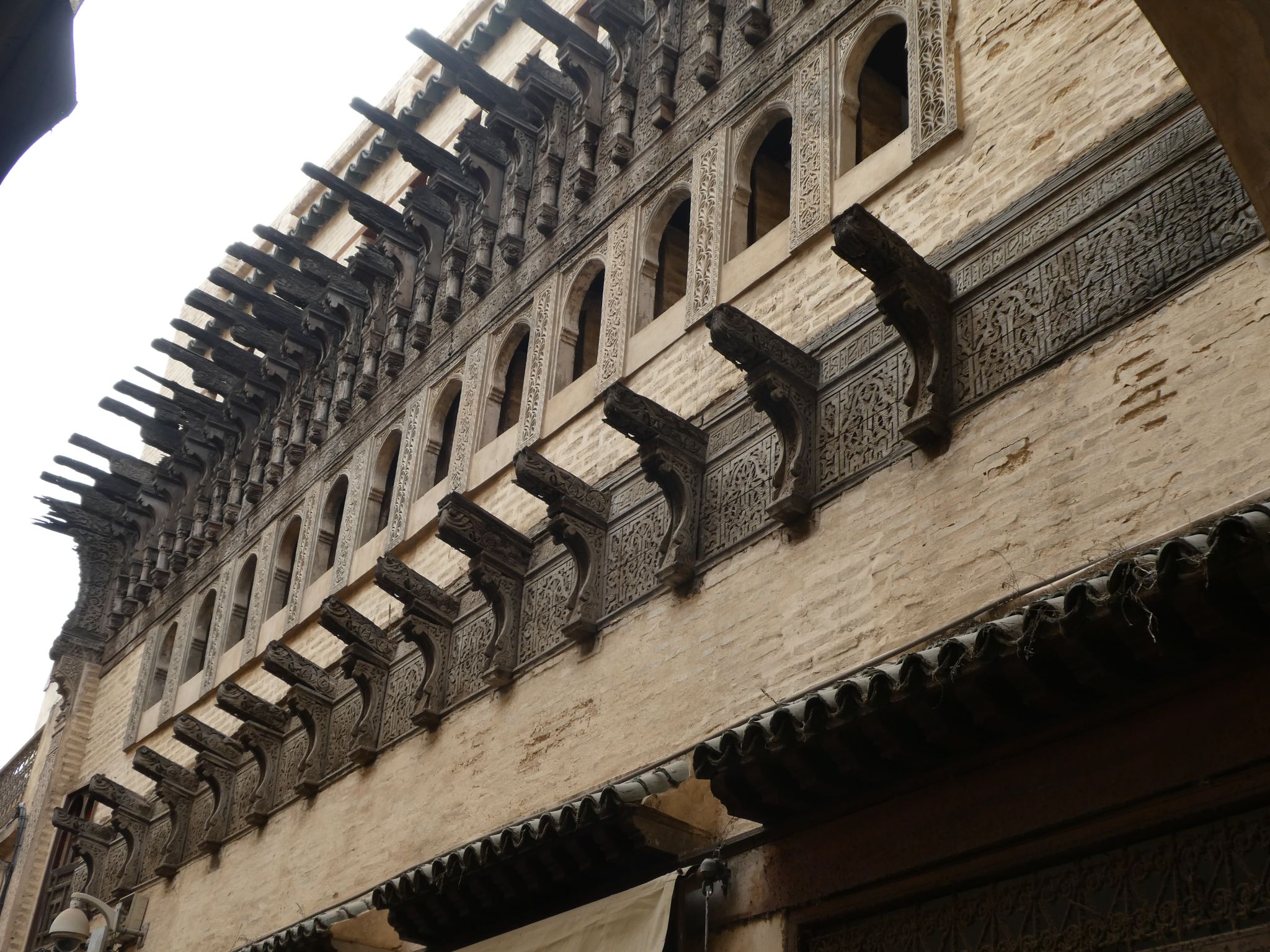 Scattered throughout the medina are little tenancies like the cottage industries of pre-industrial Europe, some barely bigger than a single tiny room, where a lone person is making clothes using an ancient sewing machine, repairing shoes, doing small metal fabrication or any number of other semi-industrial jobs. 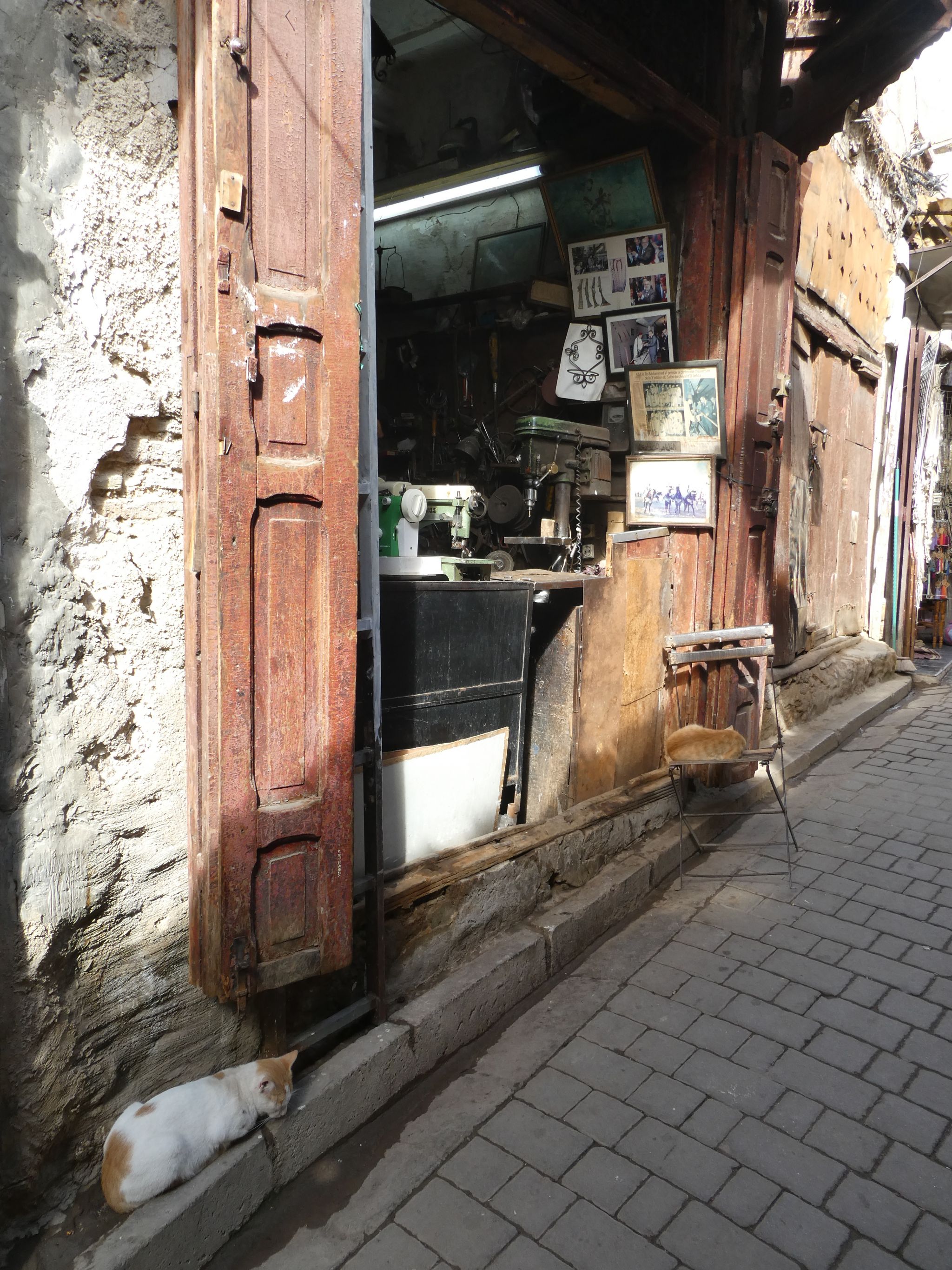 It’s virtually impossible not to get lost in the medina.  The lanes twist and turn, there are no street signs because only the major arteries have names, there’s no detail of the lanes on Google maps, and GPS doesn’t work in there.  But once you accept that fact, you can feel free to just wander until you get tired, and then there will always be an opportunistic urchin to show you the way back to where you want to be.  For a few dirhams, of course!