An hour by bus from Fez is the town of Meknes.  The medina dates to the 10th century but the city only really rose to importance in the 17th century when Moulay Ismail made it the imperial capital.  This was short lived, as his successor moved the capital to Marrakesh, but the city has many remnants of that imperial era.

The medina is a tangle of ancient, winding, confusing lanes which have changed little in centuries, except that now the clothes, shoes and household items sold there are more likely to be mass produced imports then traditional handmade items.  It is very much a local market for local people.

Buried within the medina, we tried in vain to find the Grand Mosque and adjacent Bou Inania Merdesa.  We had a map of sorts on which it was marked, we could hear it, we could see the minaret from time to time, and we must have circled it time and again, but find it we could not.  Until a fellow took us to the front door – then waited until we emerged because what he really wanted to do was sell us a carpet.  No room in the back pack, unfortunately.

Like most mosques in Morocco, the Grand Mosque is closed to non-Muslims, but the Merdesa is open.  It is smaller than its namesake in Fez but equally intricate in its decoration. 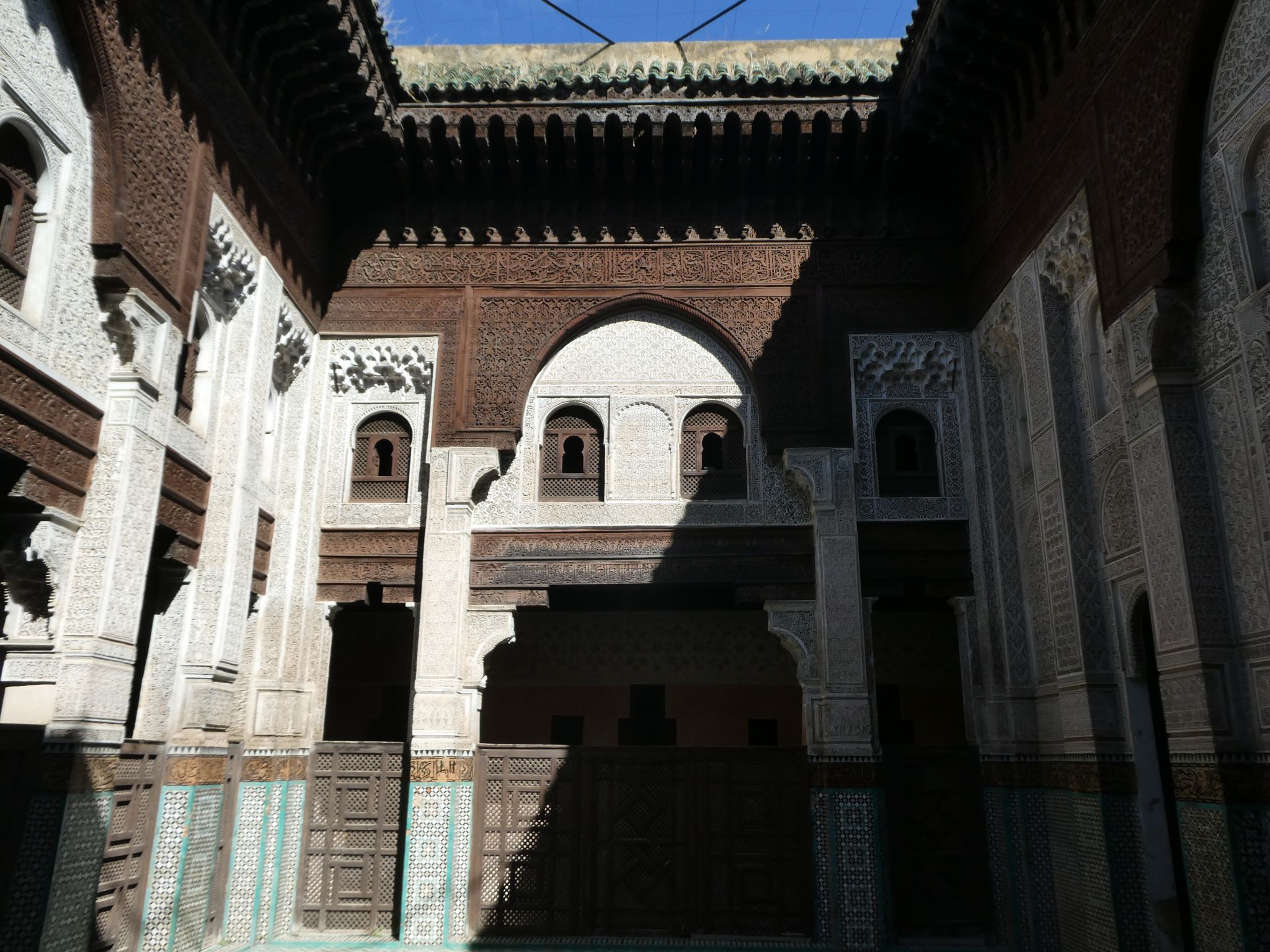 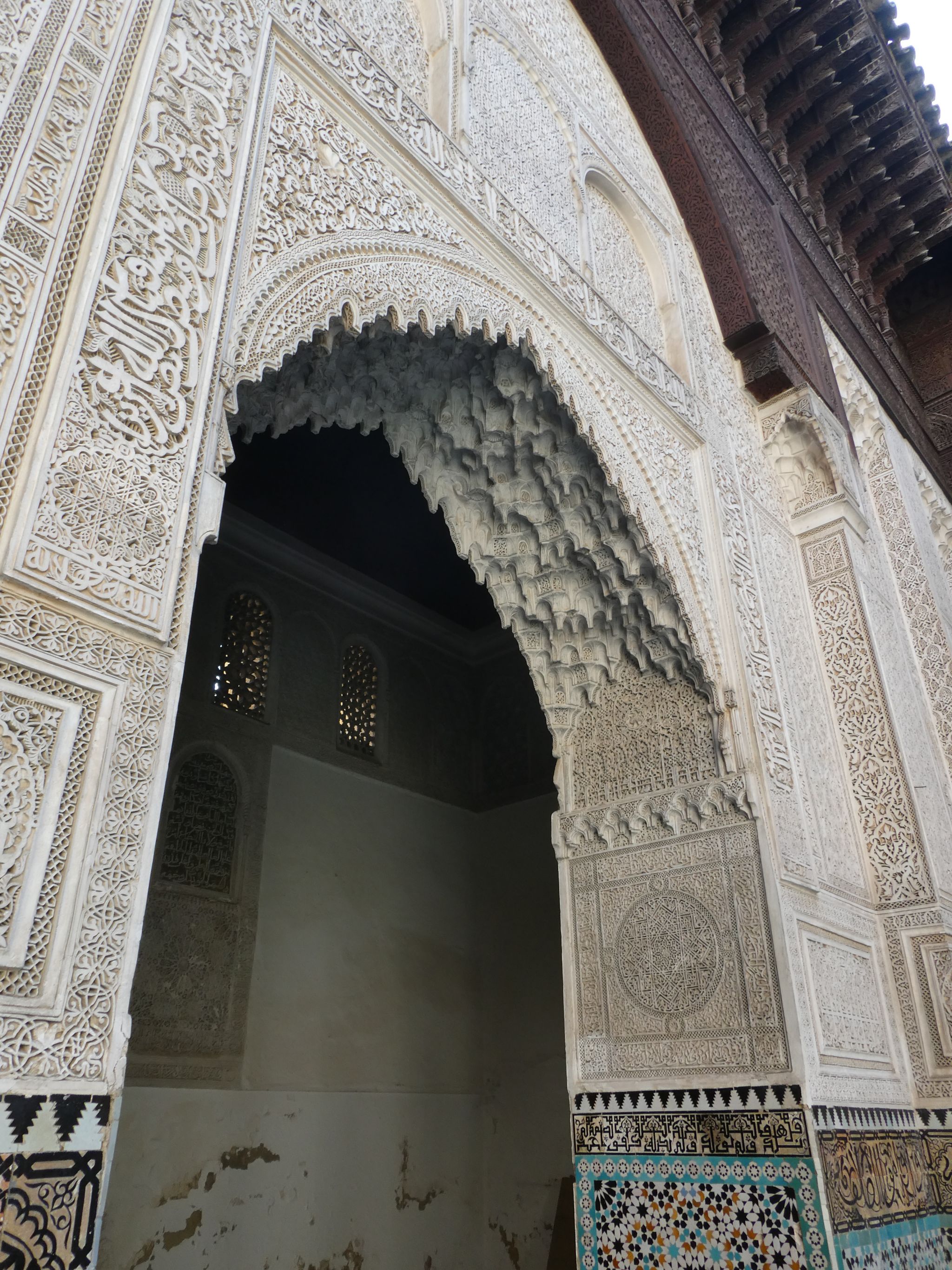 Like Fez, and everywhere in Morocco, the medina has lots of cats! 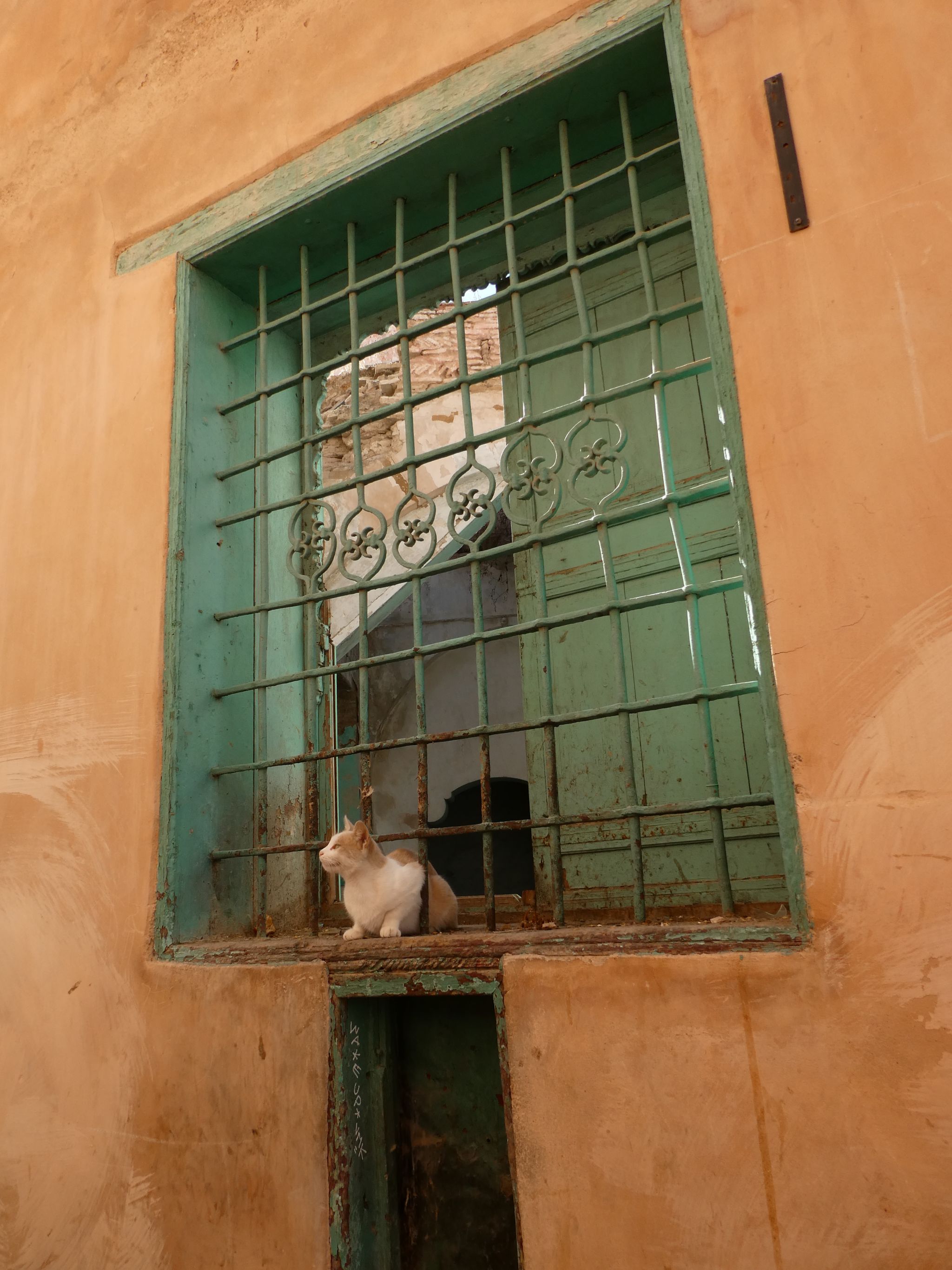 Most of the city’s sights are outside the medina, in the adjacent imperial city.

The first thing a walled imperial city needs is a monumental gate.  The Bab el-Mansour has been described as ‘the grandest of all imperial Moroccan gates’. 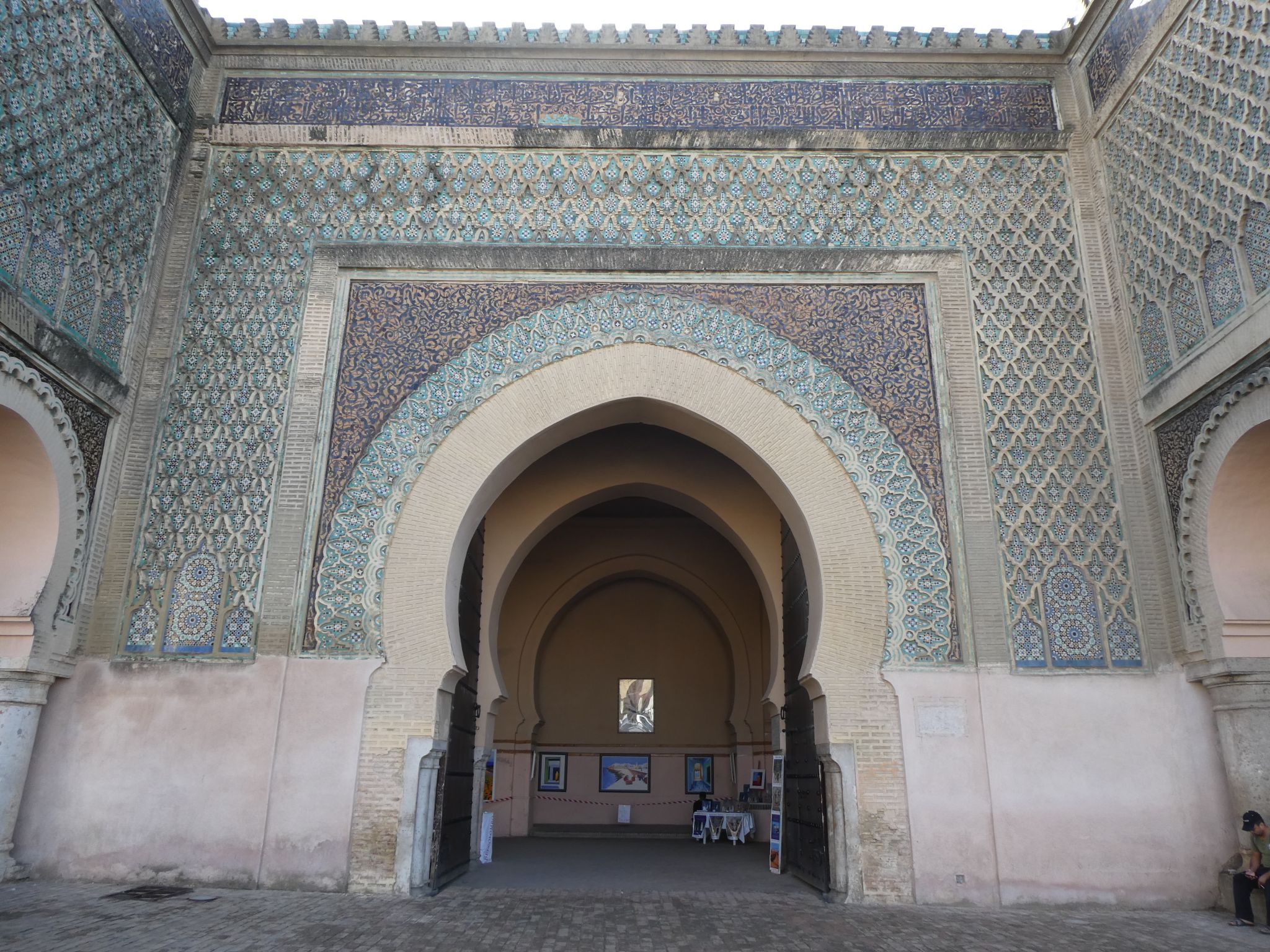 Then it is necessary to clear a large space so that visitors approaching the gate can get a perspective on your masterpiece.  For this purpose, Moulay Ismael ordered the demolition of a kasbah between the medina and the gate to create a huge, open plaza from which to admire the gate, and in which royal announcements and public executions were conducted.

The plaza which remains to this day a public open space, is now lined with cafes.  And whilst it may have been created to give a view of the gate, it is equally effective in giving a good view of the walls of the medina. 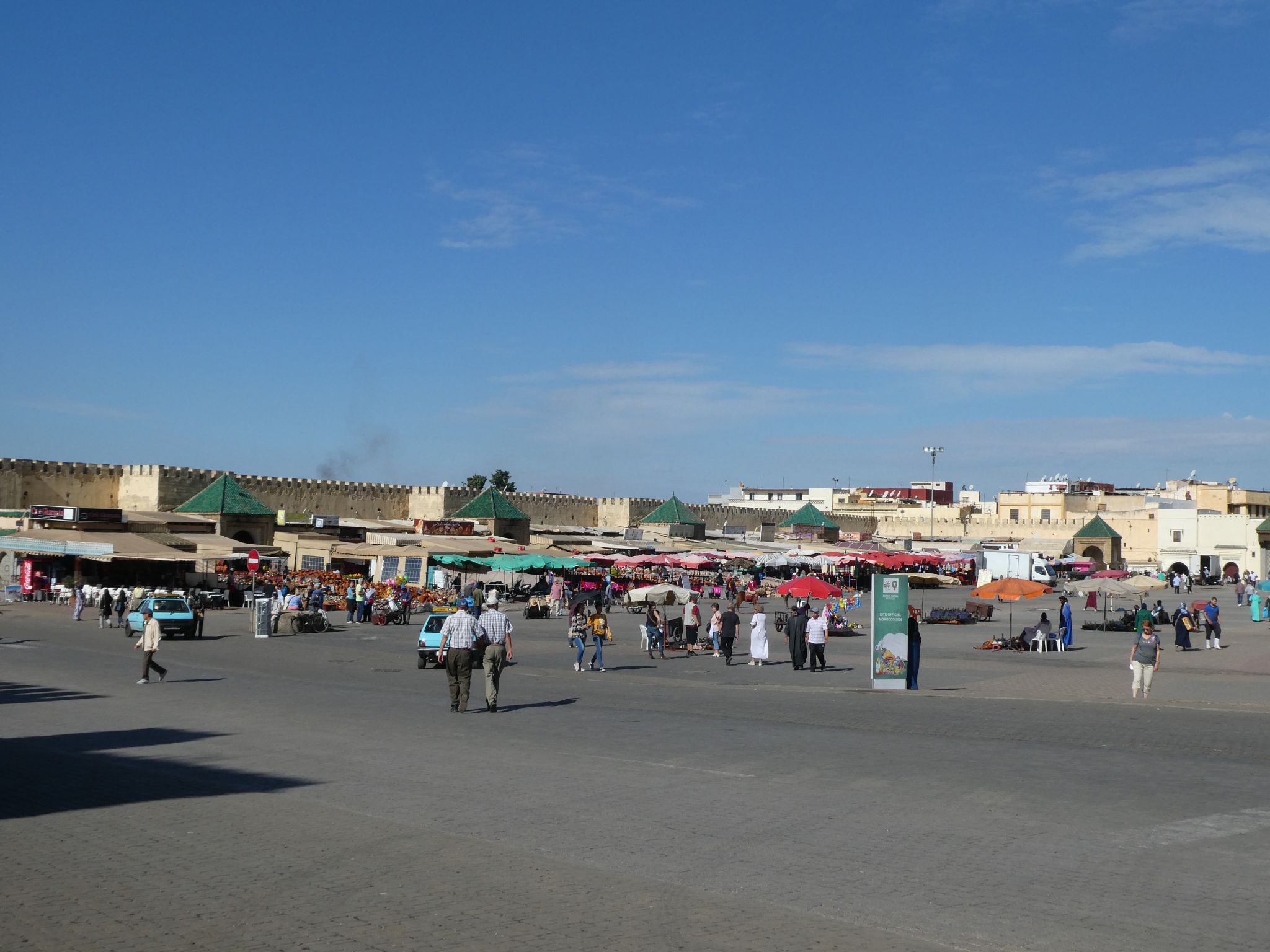 It is only in recent years that Meknes has begun to attract tourists in sufficient numbers for the city to realise the benefits of sprucing up the monuments in the imperial city.  It seems that is all now happening at once, which is great for the city and for future visitors, but has the unfortunate effect that many of the monuments are closed whilst renovations are done.

Moulay Ismail ruled Morocco with an iron fist, enforced by his famous Black Guard.  Ismail brought 16,000 slaves from sub-Saharan Africa to form the Guard, then guaranteed its continuity by providing the men with wives and raising their children to join the Guard.  By the time of his death, the Guard had expanded tenfold.  Ismail inspected the Guard in the Place Lalla Aouda, which is being redeveloped into public gardens.  It’s a work in progress. 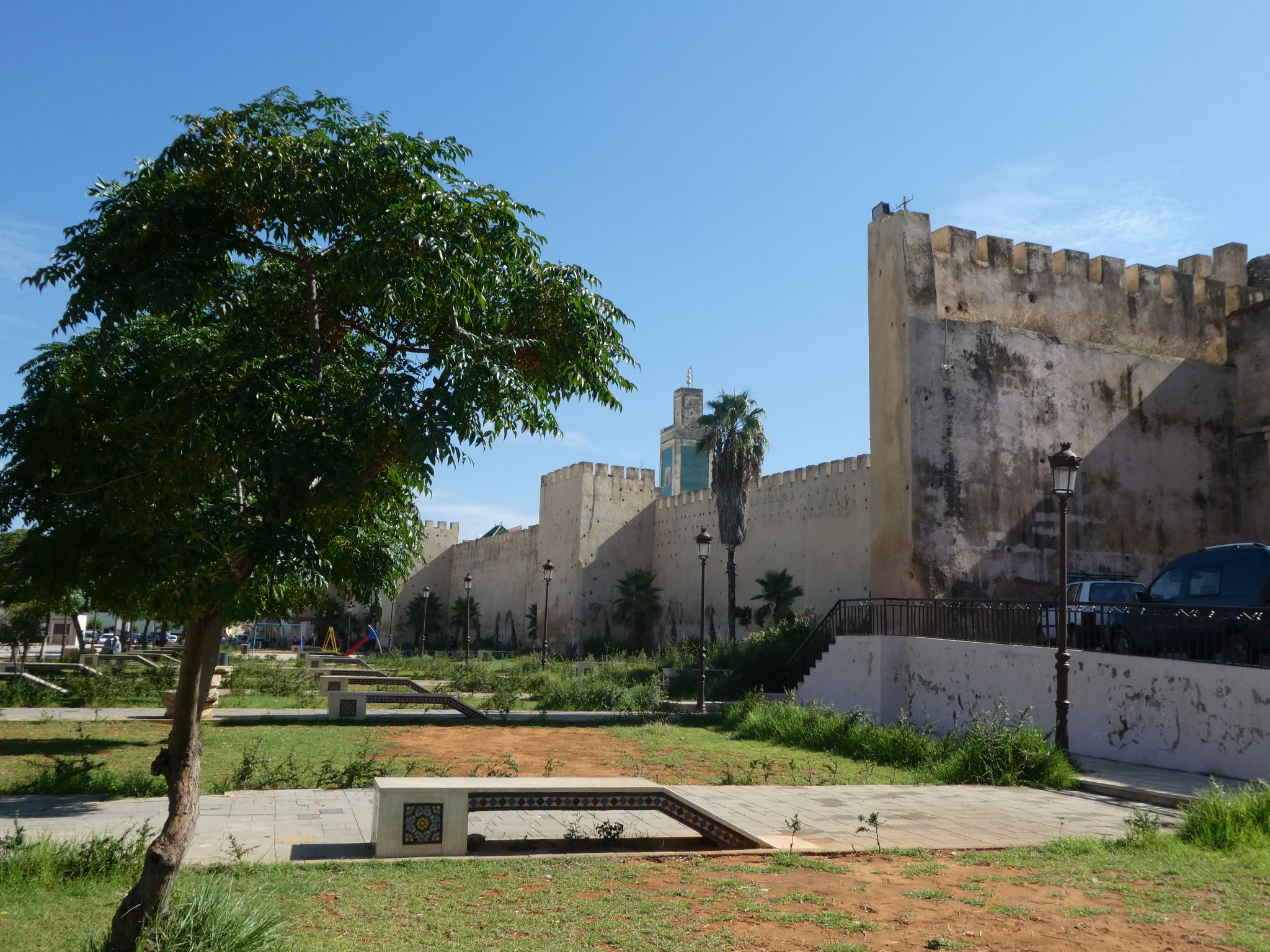 Just around the corner, the mausoleum of Moulay Ismail looks lovely from the outside, but the interior is closed for renovations. 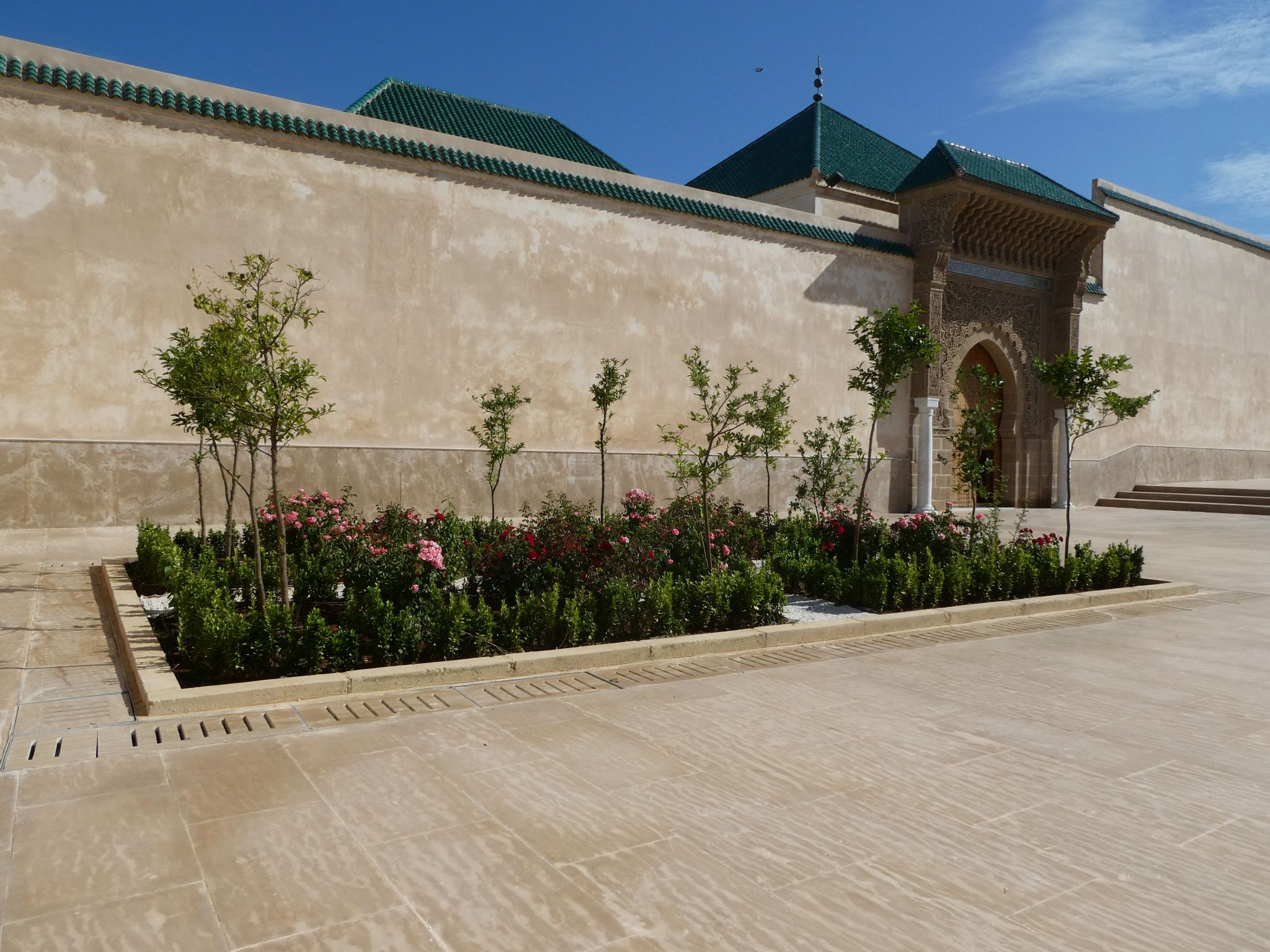 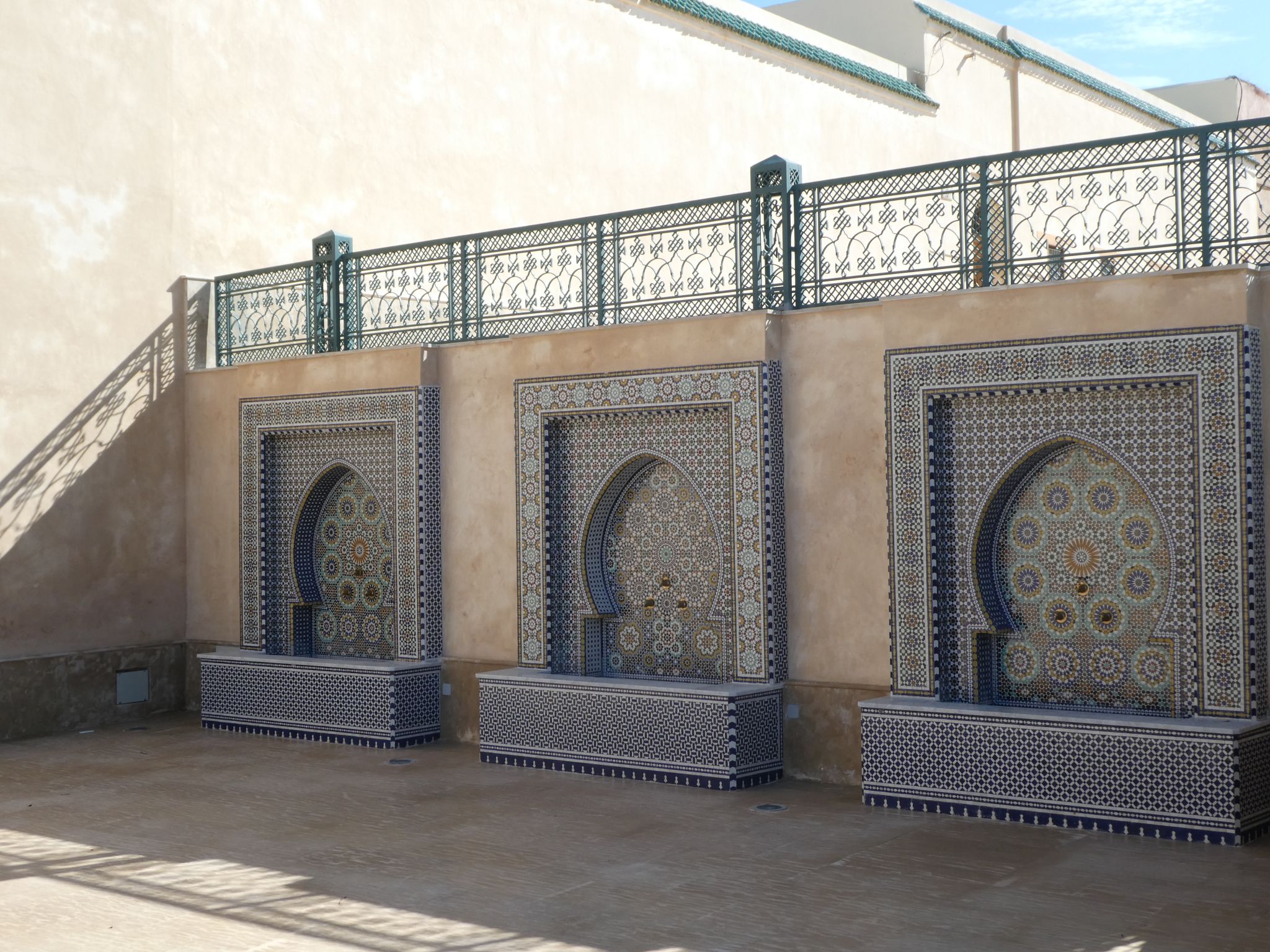 From there it’s a short walk to the former Royal Palace.  Nice front door, but also closed for renovations. 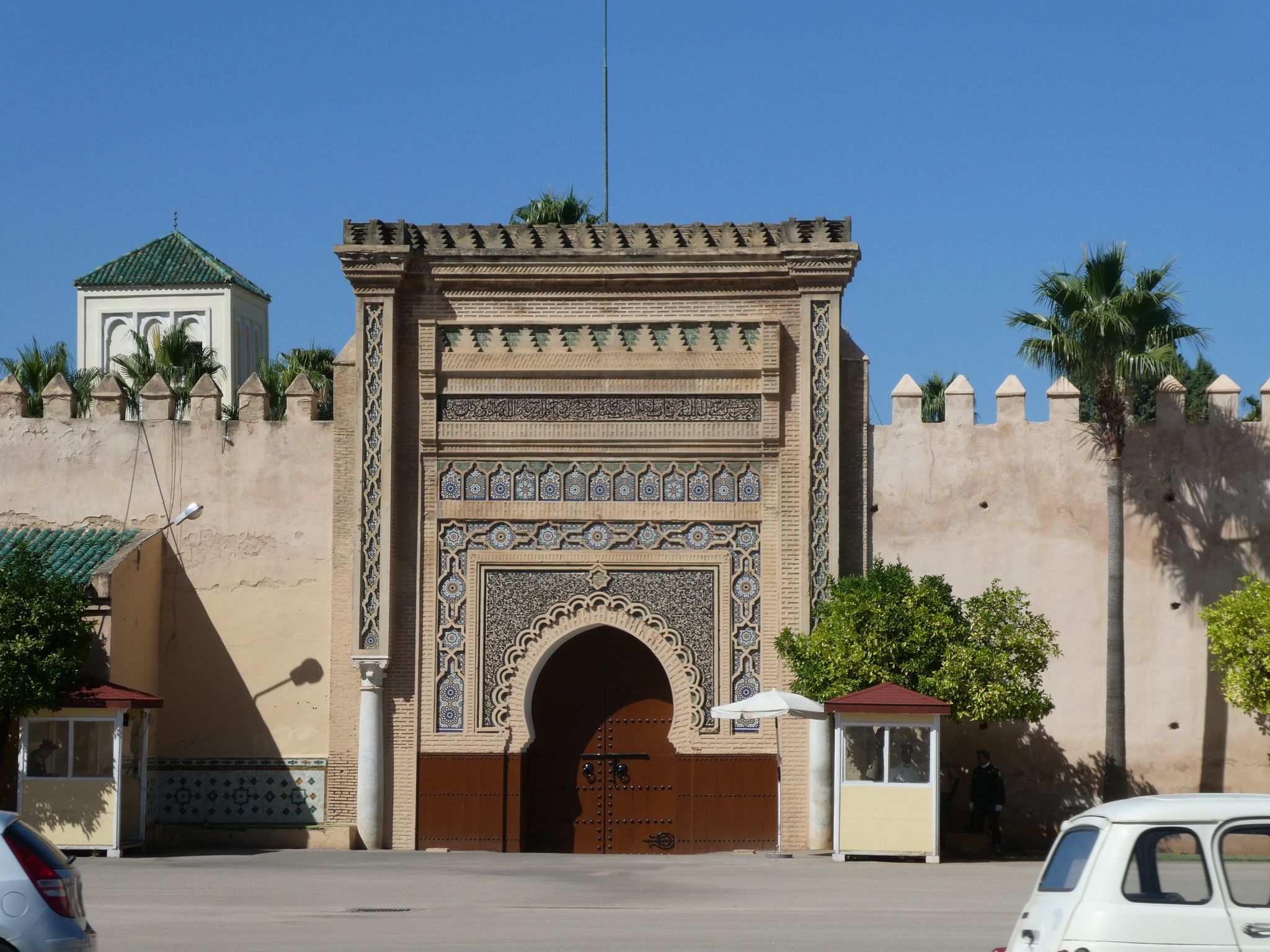 There is even a Royal Golf Course.  You guessed it.  Closed for renovations.

The Royal Granary and Stables is open to visitors.  The building provided stabling and food for 12,000 horses, and was effectively ‘air conditioned’ by a combination of thick walls, tiny windows and underfloor water channels to keep the building cool.  Moulay Ismael considered it his greatest architectural achievement. 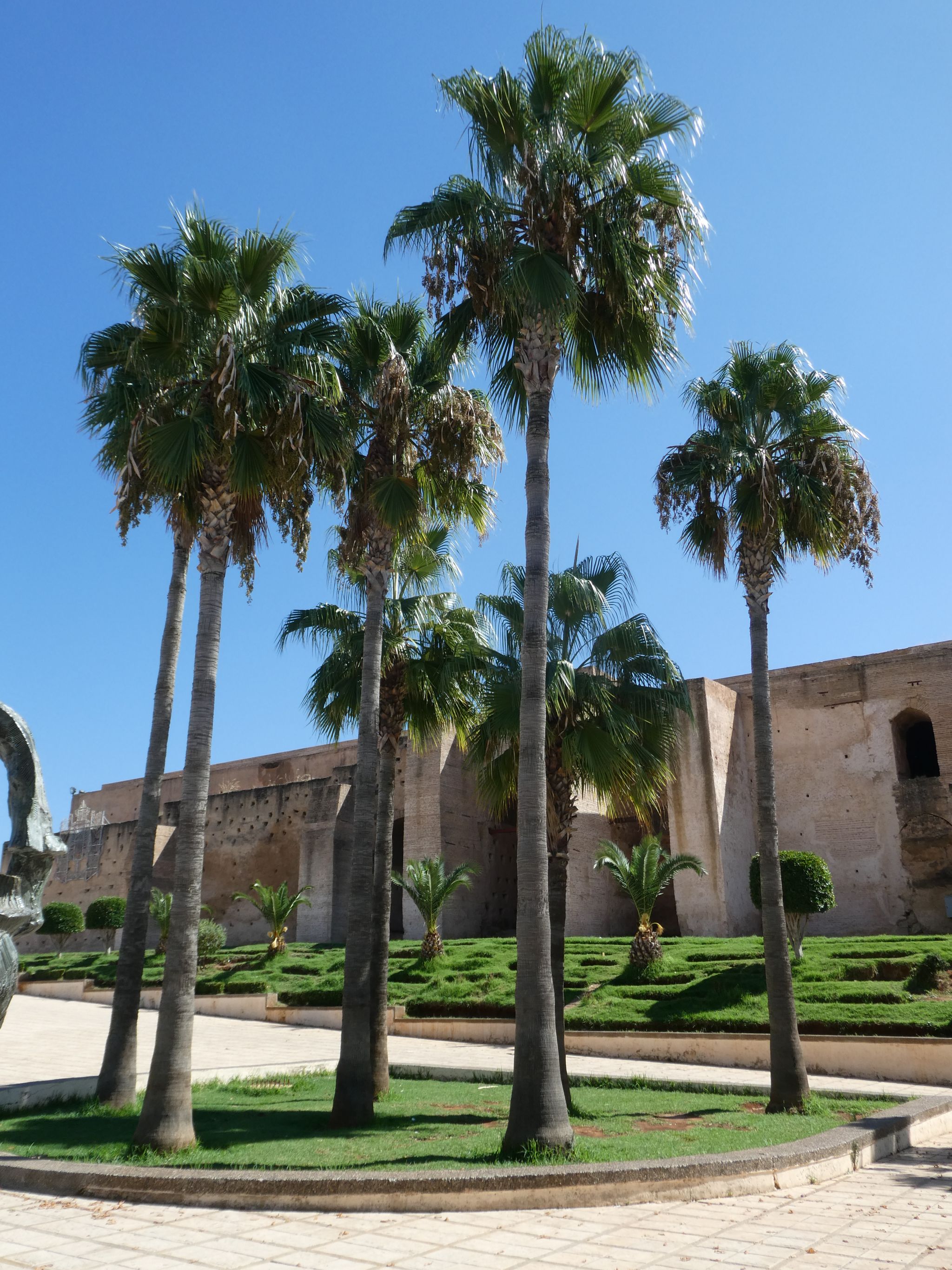 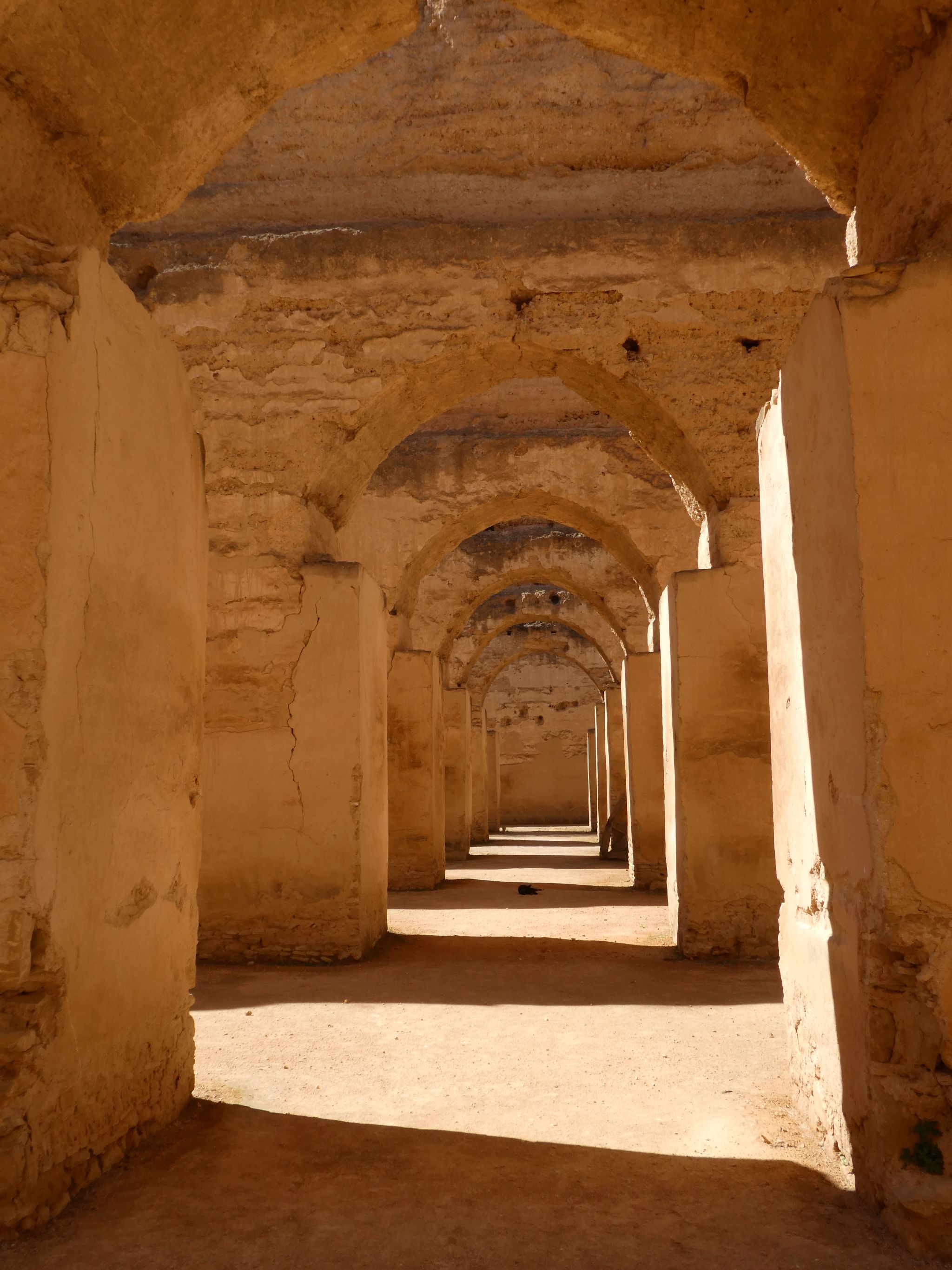 Meknes is also a convenient town from which to visit the Barbary macaques living in the forest near Azrou, a small town about an hour and a half from Meknes.

Barbary macaques are the only species of macaque outside Asia.  They are found only in the Atlas Mountains in Algeria and Morocco, and a colony of uncertain origin on Gibraltar.  The Gibraltar troops are called Barbary apes, but in fact they are monkeys, not apes.

Whilst the population on Gibraltar is stable, at around 230 monkeys, numbers are in critical decline in Morocco and Algeria.  So serious is the problem that a program has been started to bring some from Gibraltar in a bid to increase the population in Morocco.  So seeing them in Morocco is a real privilege.

Several troops live in the cedar forests around Azrou. 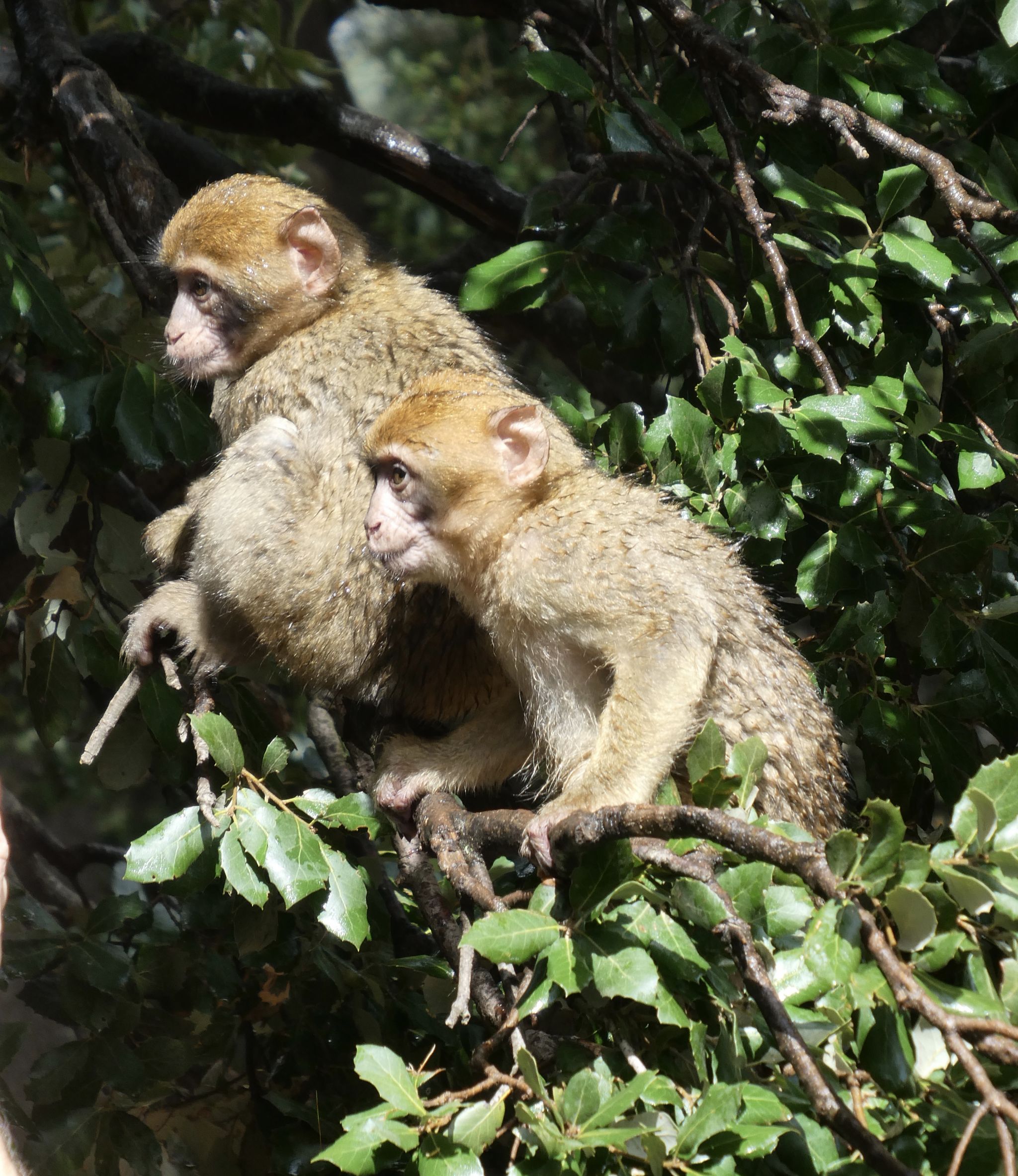 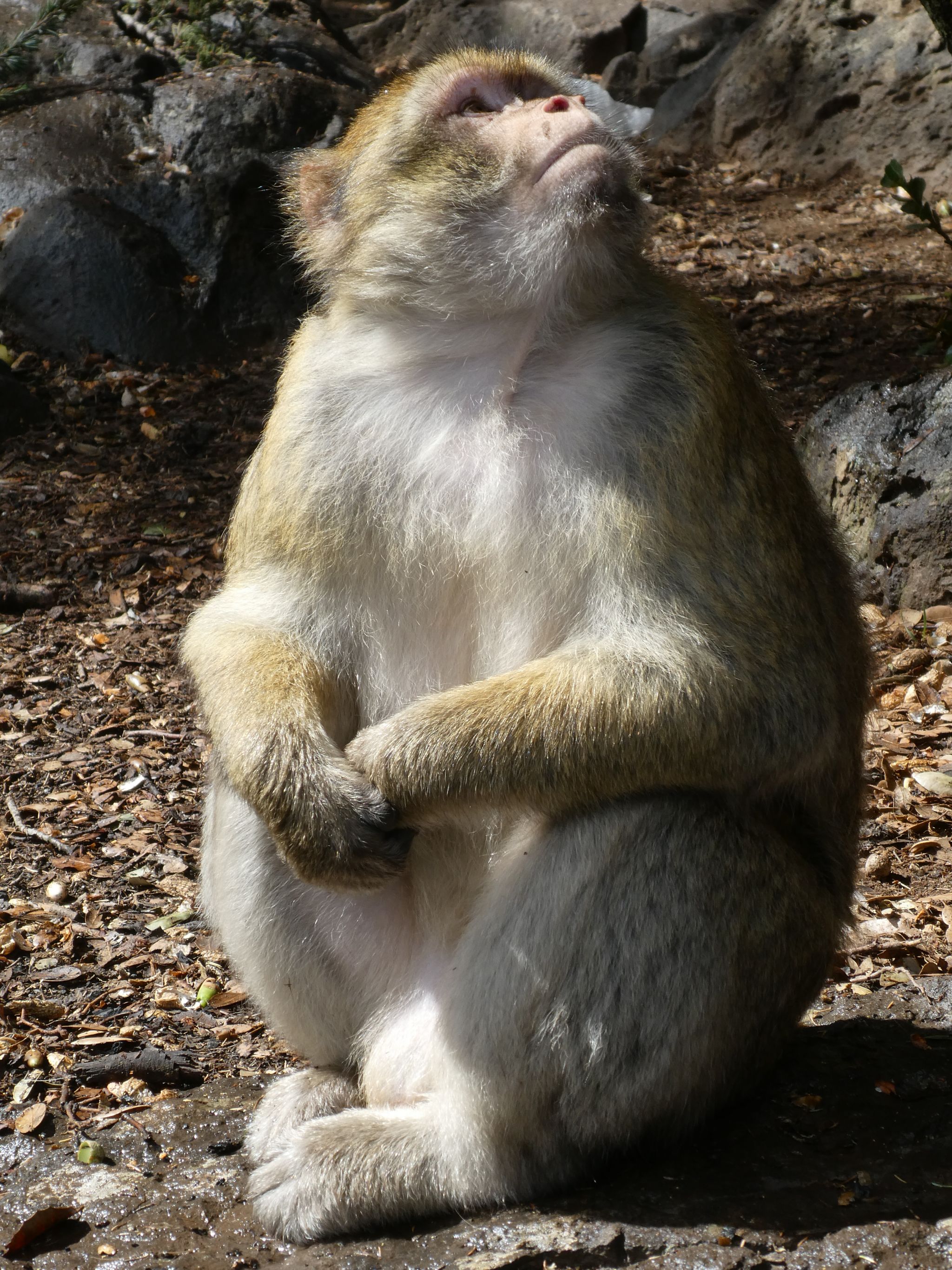 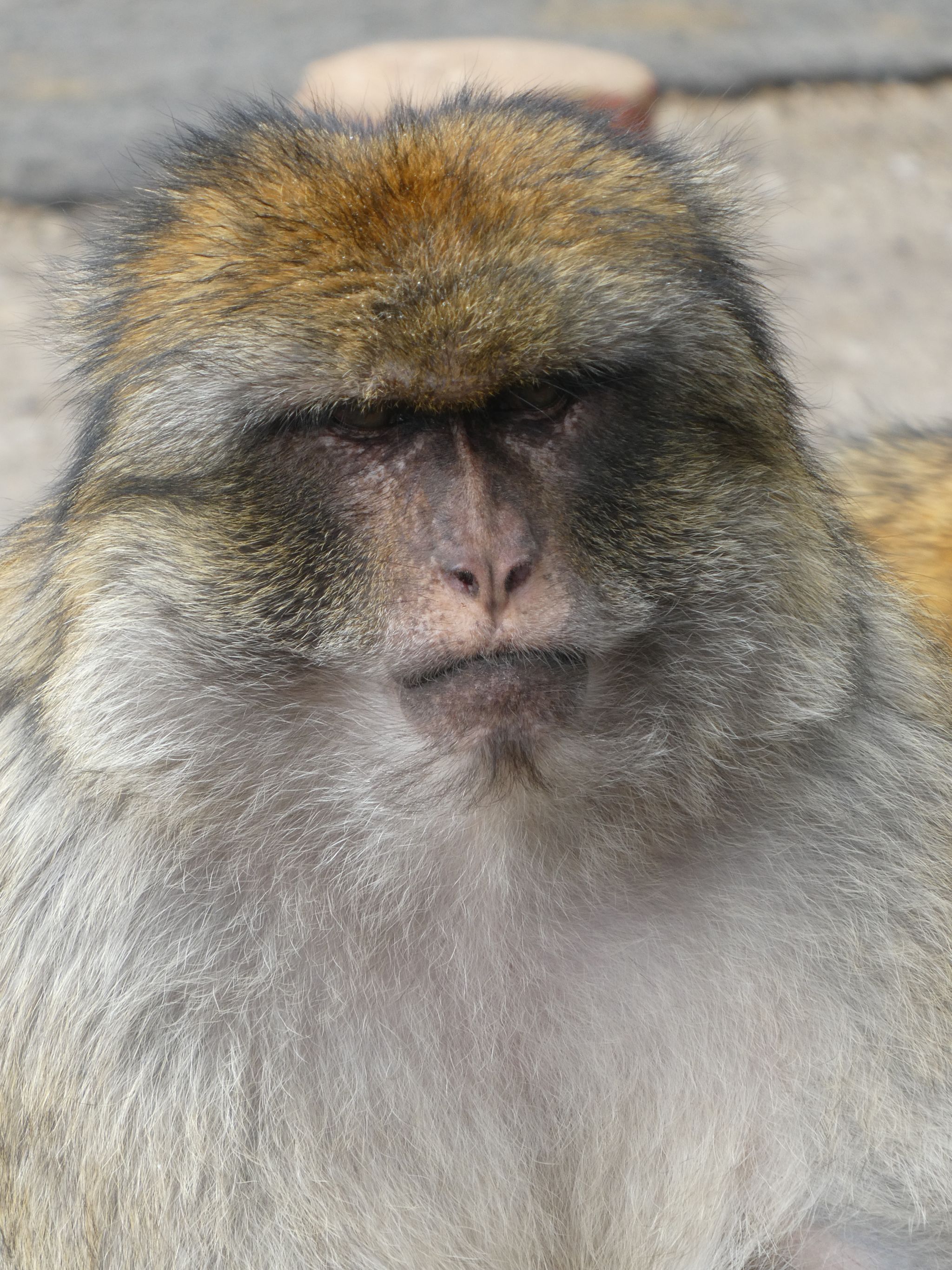 Unfortunately, with a habitat so close to human civilisation, some have become over-habituated to people.  It is almost always possible to find them at a picnic area about 15 minutes out of Azrou, because people feed them.  This is a popular stopping point for tour buses and tourists in private vehicles, as well as locals.  Getting up close to the macaques is obviously appealing, but the macaques pay a high price, including problems with obesity, loss of skills for foraging for their own food, and the myriad other problems that accompany inappropriate interaction with humans.

Bluntly, this was a distressing sight.  It’s a bit of a circus, with locals flogging snacks to feed the monkeys, tourists doing silly things to get a good photo, and the monkeys hanging around in an untidy strip by the roadside instead of in the forest.  With the benefit of having had the experience, we would say that if you want to see these beautiful creatures, pay an accredited trekking guide to take you into the forest for the chance to see them in their natural habitat.  And if you do see them at the picnic ground, at least don’t feed them.