Perched at the tip of Morocco and just 15kms across the Straits of Gibraltar from Spain, for centuries Tangier was Europe’s gateway to Africa.  It was the centre of the Interzone, an international free trade zone administered jointly by European powers from 1924 until integrated into the newly independent Morocco in 1956.  During that period, up to half its inhabitants were expats.  European influence persists in the architecture of the seafront corniche and the newer parts of the city. 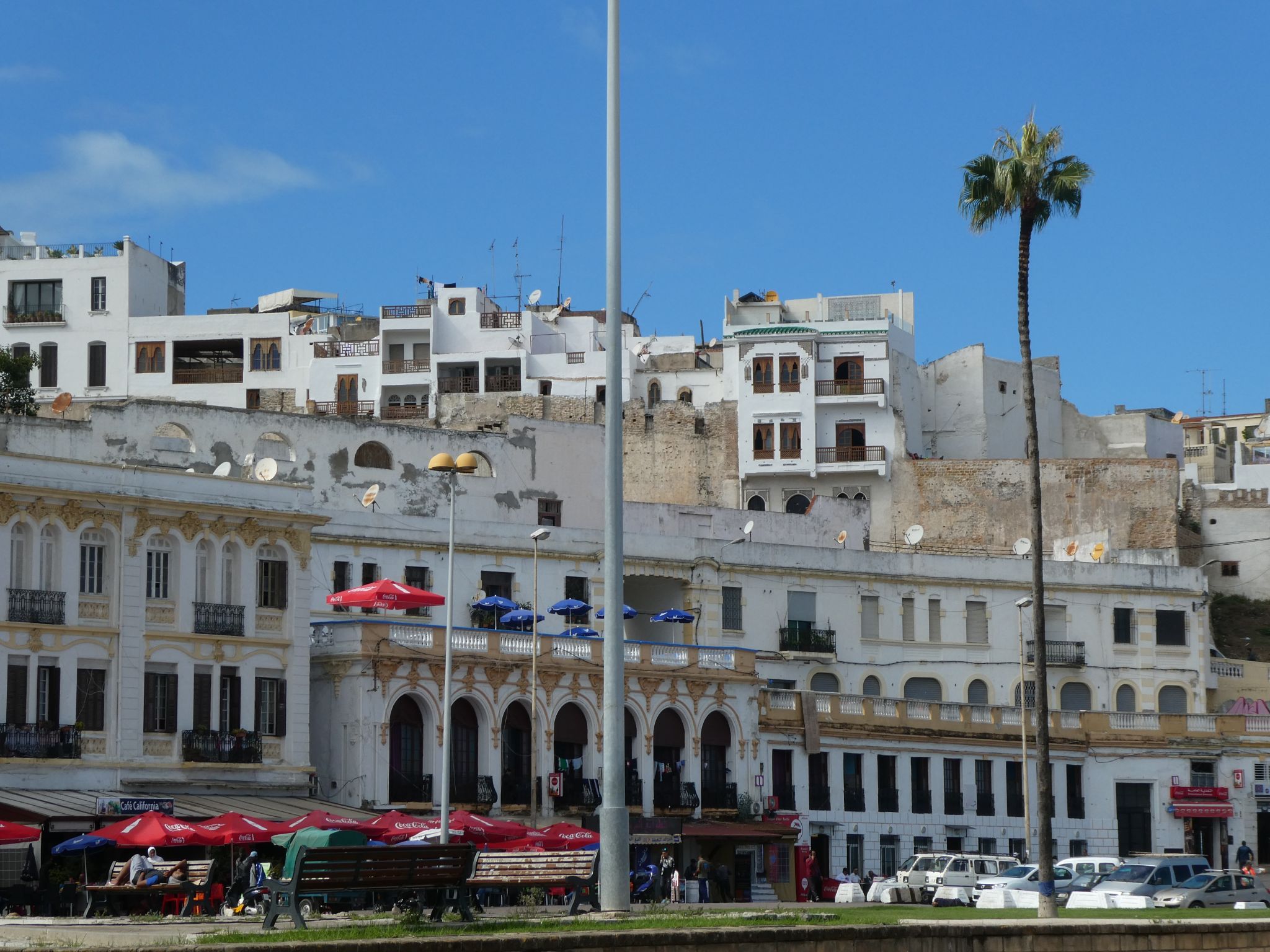 But the European influence never really penetrated the medina, which was and remains traditionally Moroccan in appearance. 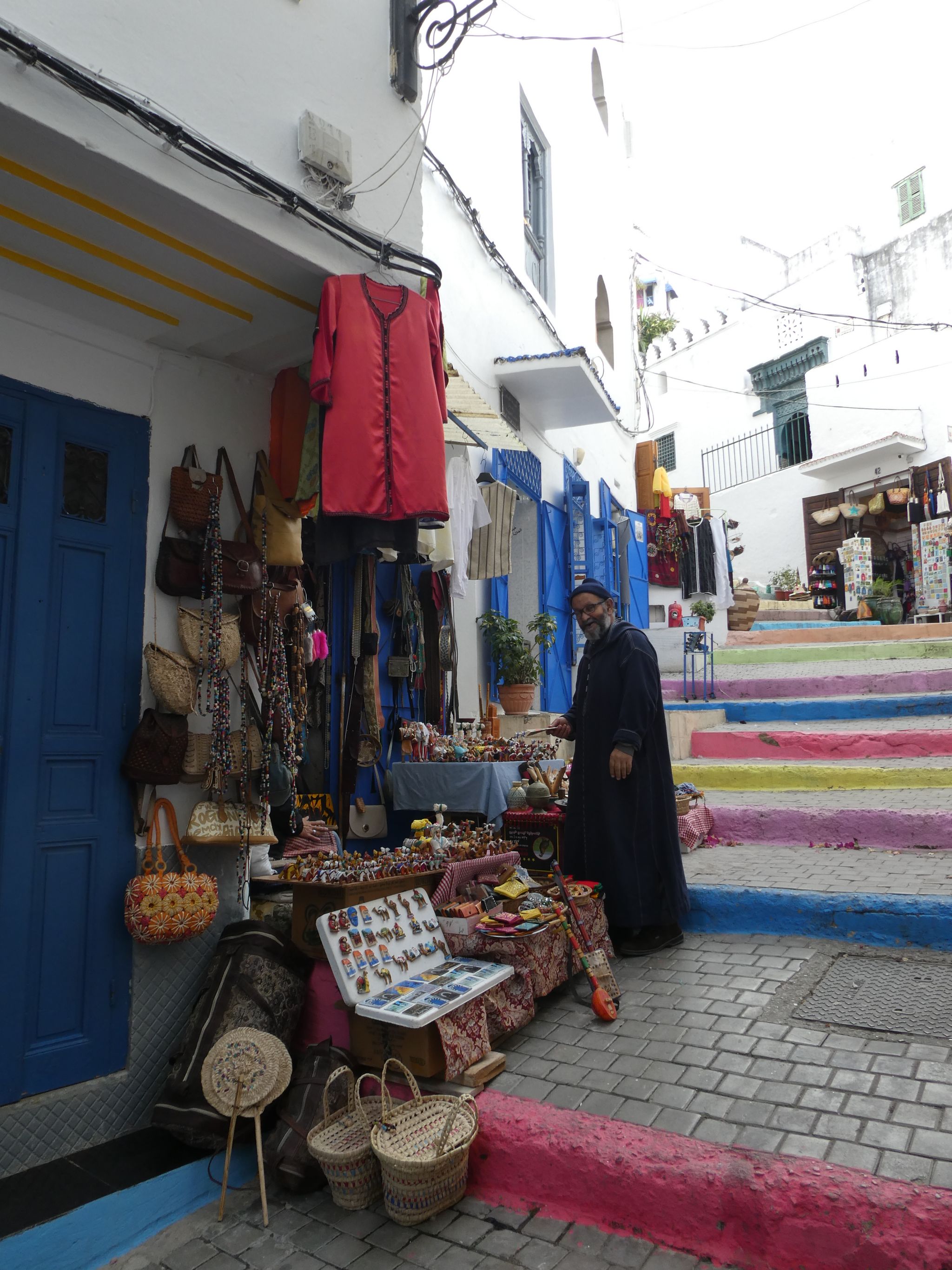 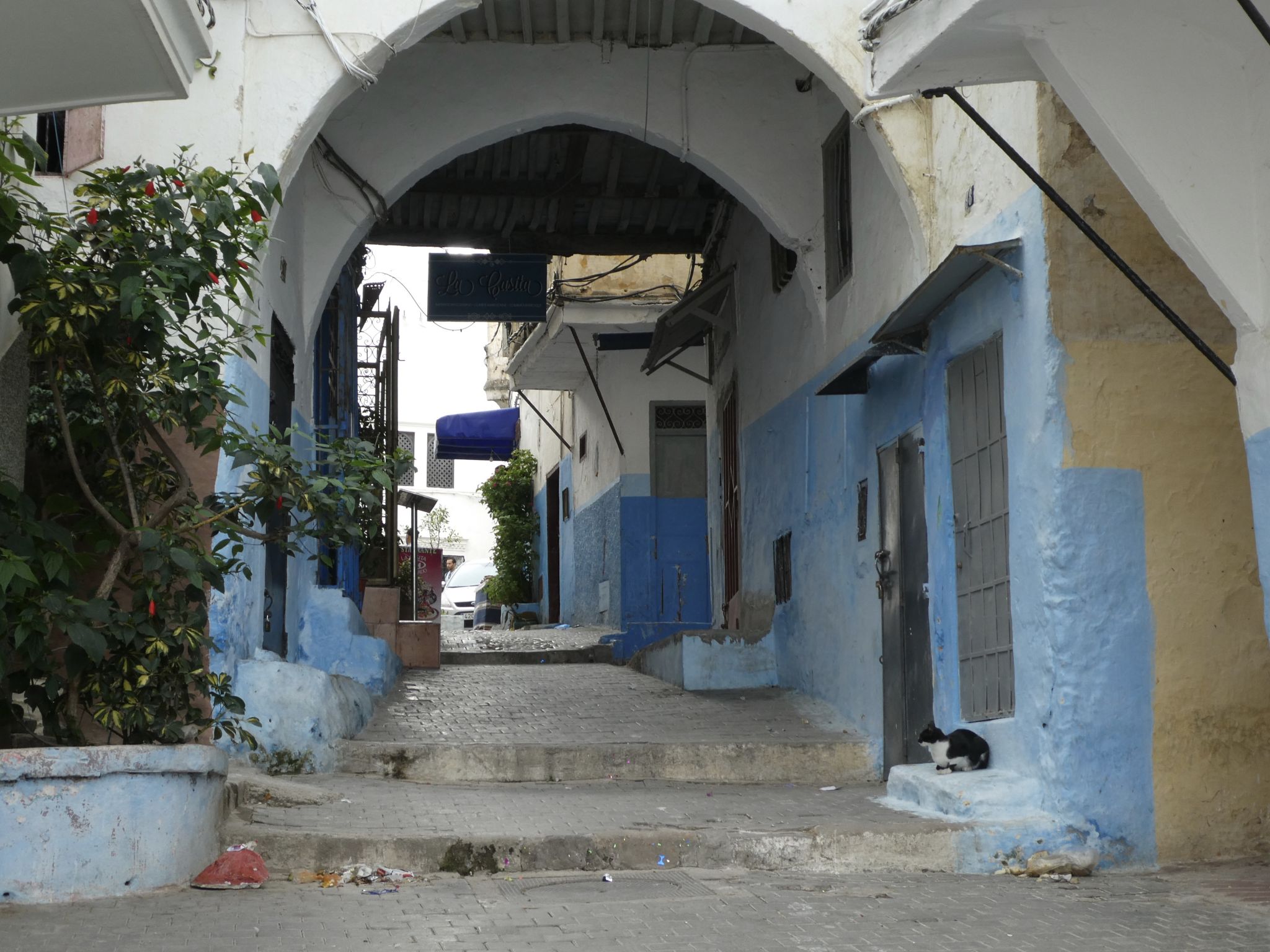 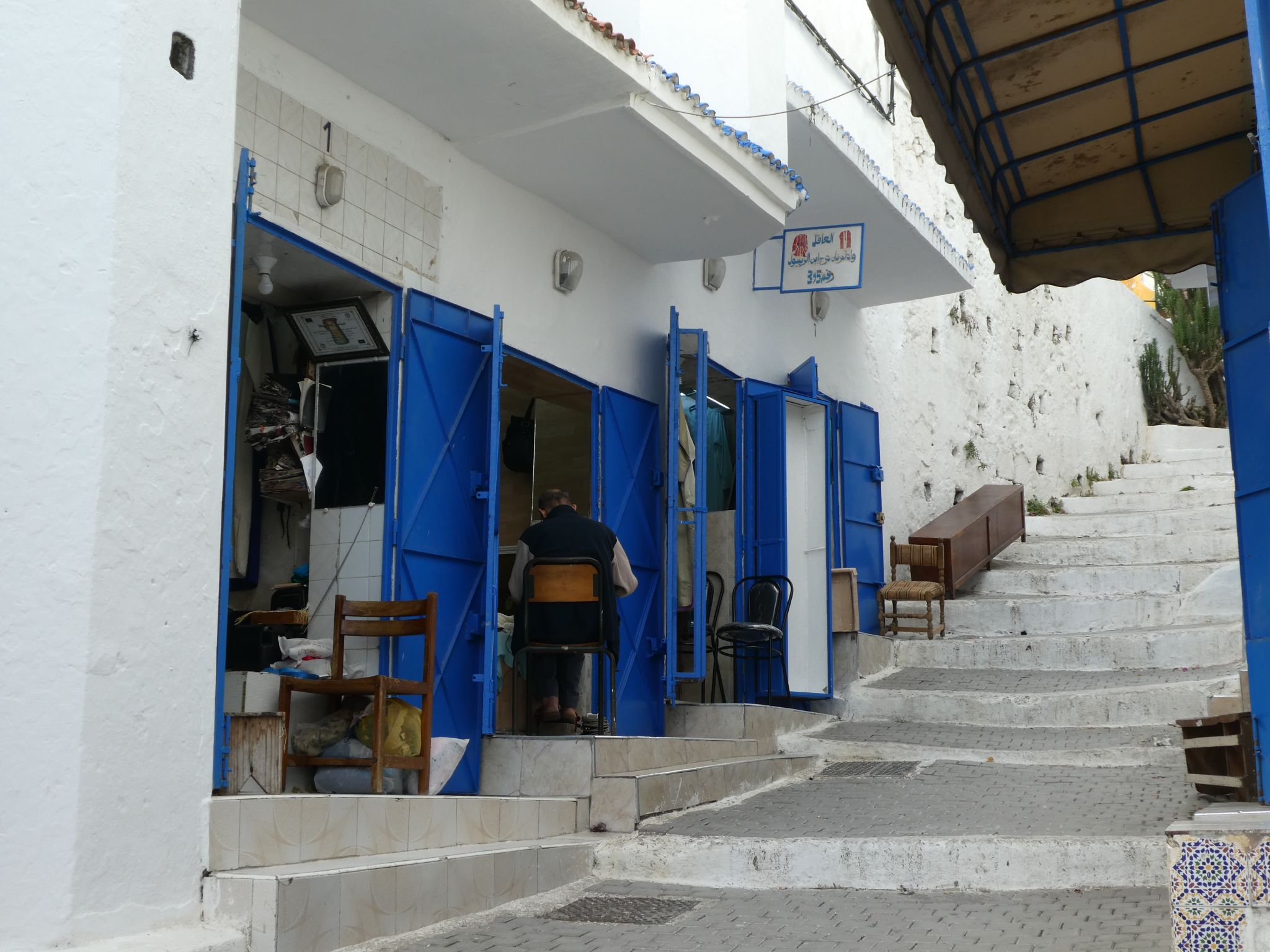 In a dingy corner of the medina is the Tangier American Legation.  The Legation was the first American public property outside the United States, and is the only officially designated US National Historic Landmark on non-US soil.  Its small museum highlights the historical interaction of the two nations, in particular the interesting quirk of history that by declaring ‘America’ a trading partner in 1777, Morocco was the first country to recognise the United States as a nation after it declared independence from the United Kingdom. 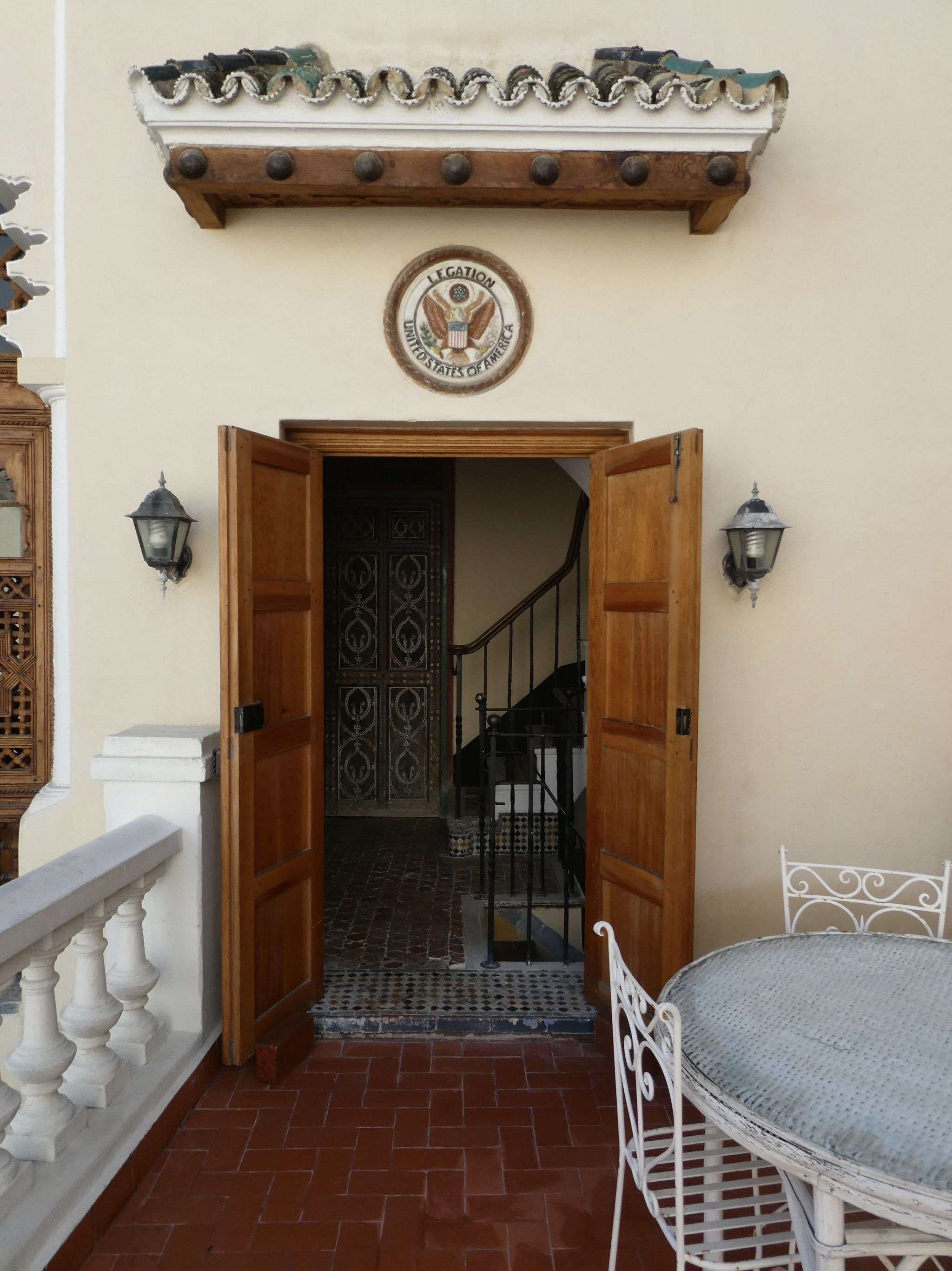 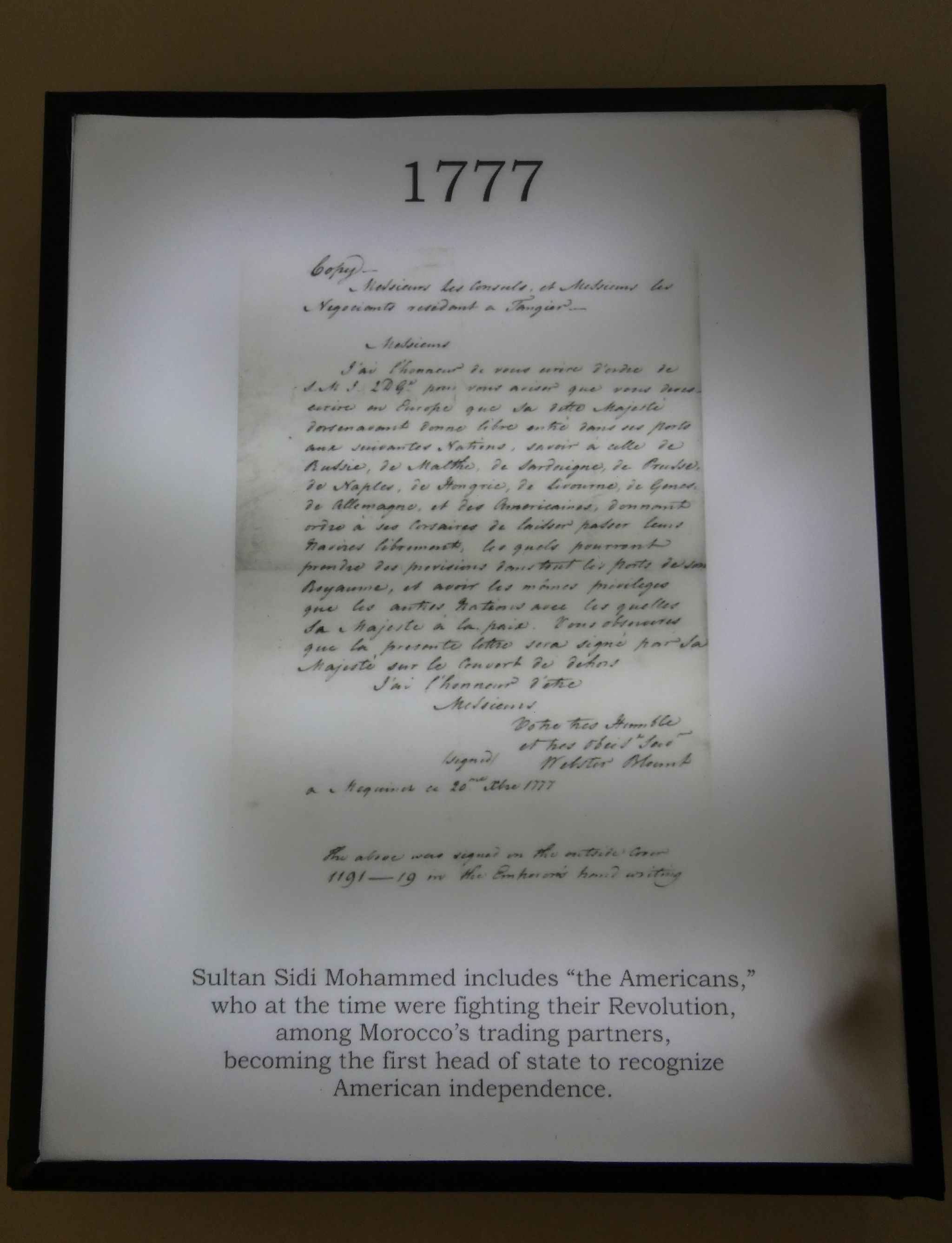 It is in an anonymous building in an unmarked lane in the back of the medina, with no signposts.  It seems surprising the Americans don’t make more of a big deal out of it.

The museum also has a room dedicated to the work of Paul Bowles, an American expatriate who lived in Tangier for over 50 years until his death in 1999.  With sponsorship from the US Library of Congress and a grant from the Rockefeller Foundation, Bowles travelled throughout Morocco in the late 1950s systematically recording music from different ethnic groups.

Bowles’ work is now being digitised by the Library.  It may well represent the last opportunity to comprehensively catalogue Morocco’s ancient musical traditions, which are increasingly being lost as tribal life gives way to urbanisation and westernisation.

Bowles is better known as the author of the novel, The Sheltering Sky.  It is a tale of the disastrous travels of a couple in ‘French North Africa’ – modern day Algeria – but the film starring Debra Winger and John Malkovich was filmed at The Continental Hotel perched by the sea at the edge of Tangier’s medina, and other locations in Morocco. 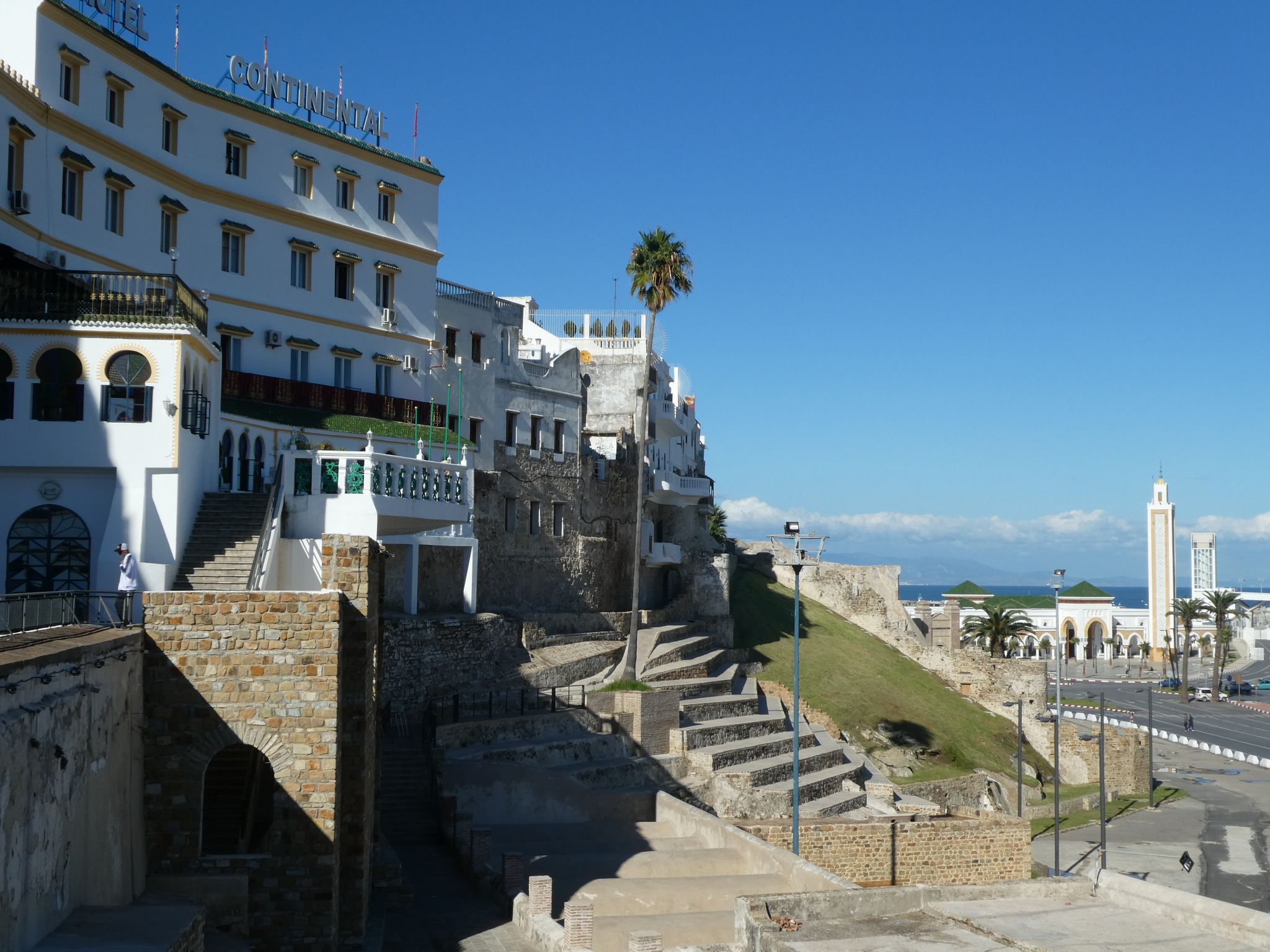 Bowles was only one of many well known writers who visited or lived in Tangier during the Interzone years, between the 1930s and the late 1950s, mostly attracted by Tangier’s bohemian reputation and moral liberalism.

Tennessee Williams, Truman Capote and Gore Vidal all visited.  It was a favourite of the Beat writers, including Allan Ginsberg, Gregory Corso, and Jack Kerouac.  William S Burroughs wrote his controversial heroin-fueled novel The Naked Lunch between long stints drinking at Cafe Central in the medina, now a popular tourist cafe. 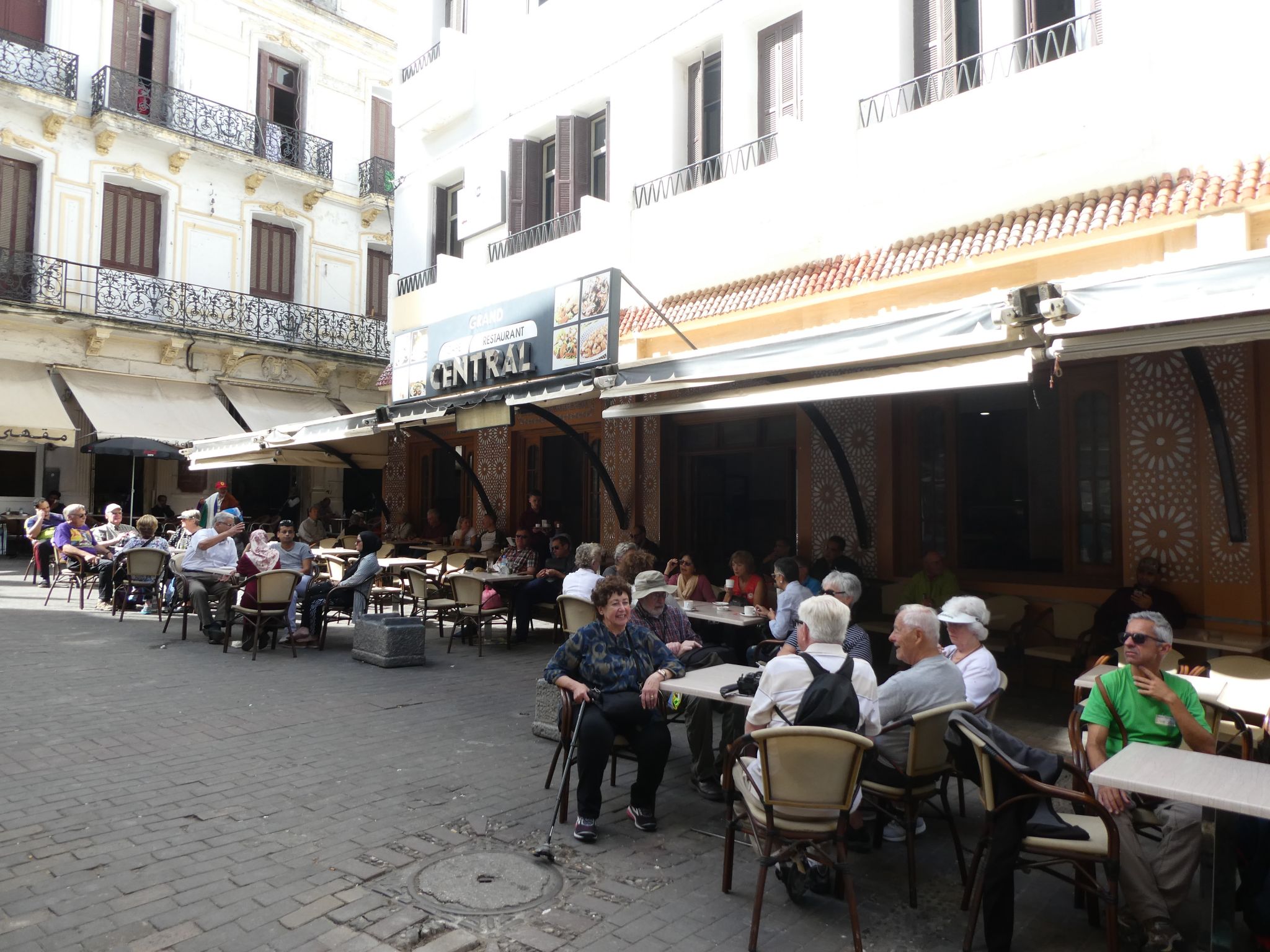 Following its integration into the rest of Morocco, the free trade zone ceased, the expats left, and Tangier fell out of favour as a destination for Europeans seeking alternative lifestyles.  Over the next decades, with little financial support from the central government, it became just plain seedy.

That has changed in recent years, with the development of a new marina, renewal works along the seafront and construction of a high speed rail link to Casablanca.  It remains a gateway between Europe and Africa, with many visitors arriving to Morocco by ferry from Spain, but like Cafe Central, not quite the exotically seedy destination of its Interzone years.

An hour south of Tangier, Asilah’s pleasant beaches make it a popular summer destination for domestic and Spanish visitors, many of whom have holiday vilas here.  The rest of the year it is a sleepy town with a laidback feel and some pleasant beachside bars with cold beer and decent red wine, courtesy of its time as part of the Spanish protectorate in northern Morocco in the first half of the 20th century.

The medina is primarily residential, smaller than most we have visited and with wider lanes that admit lots of natural light.  Many of the buildings have been meticulously restored in colours of blue and white reminiscent of the island towns of Greece. 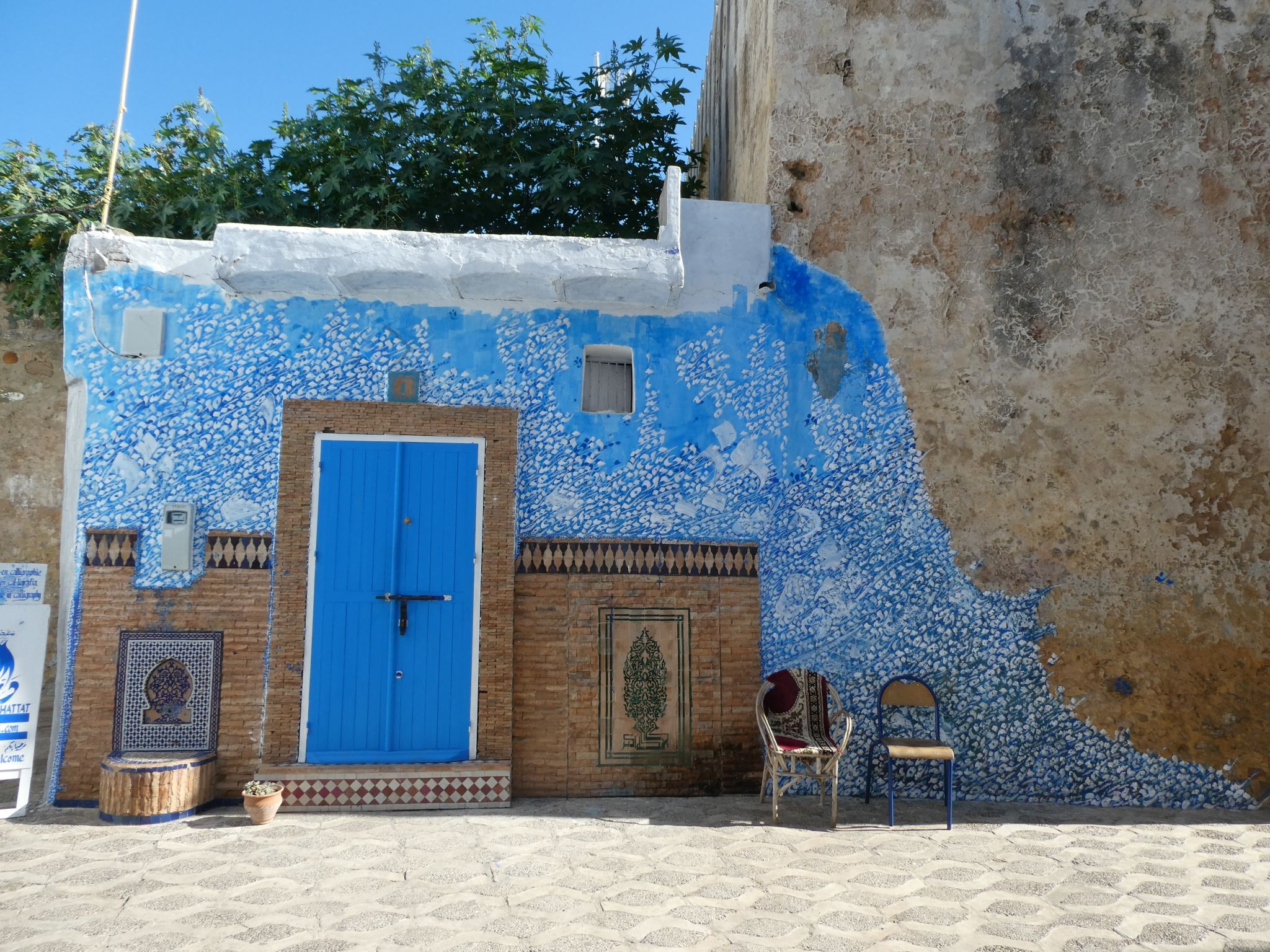 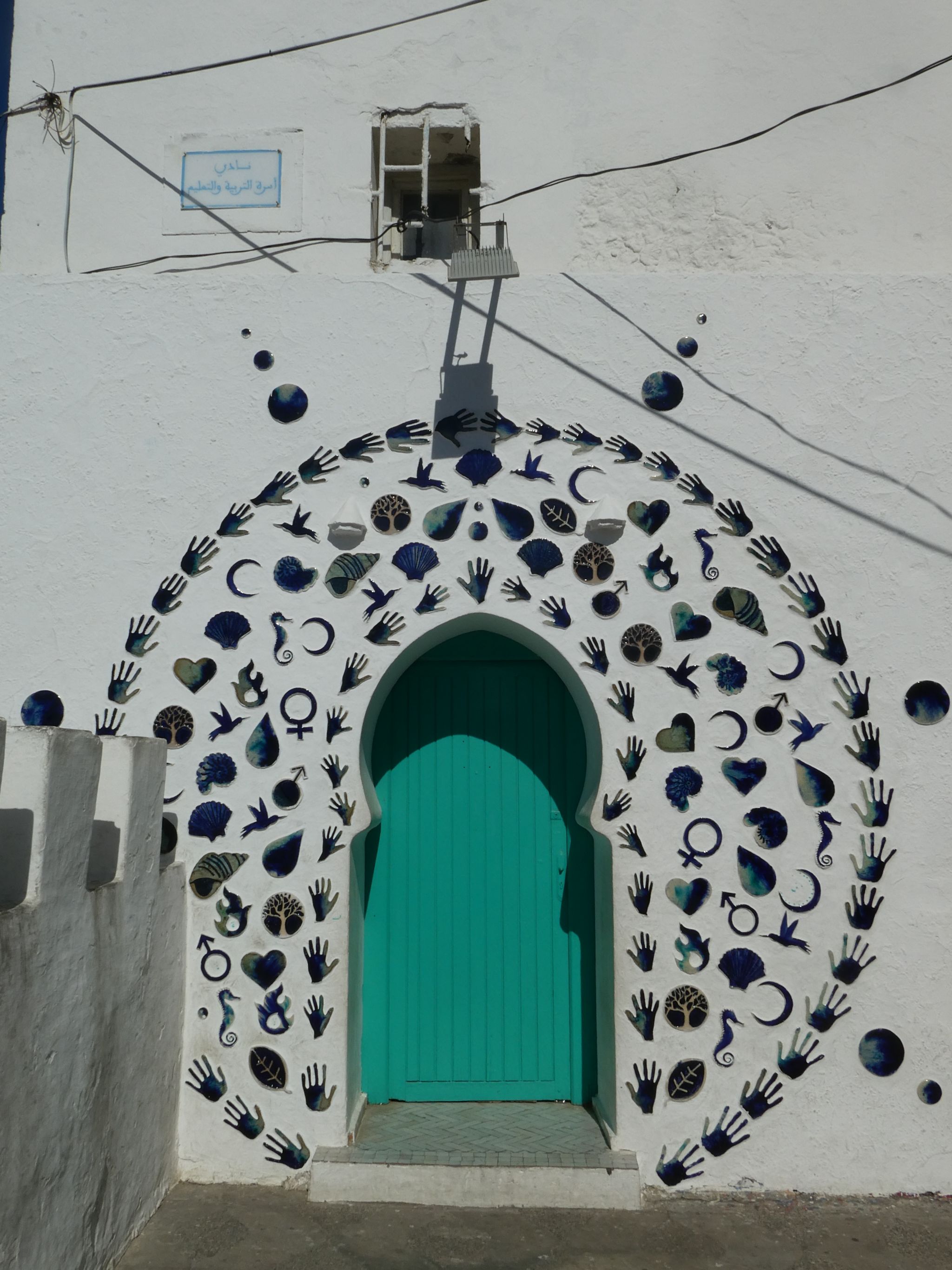 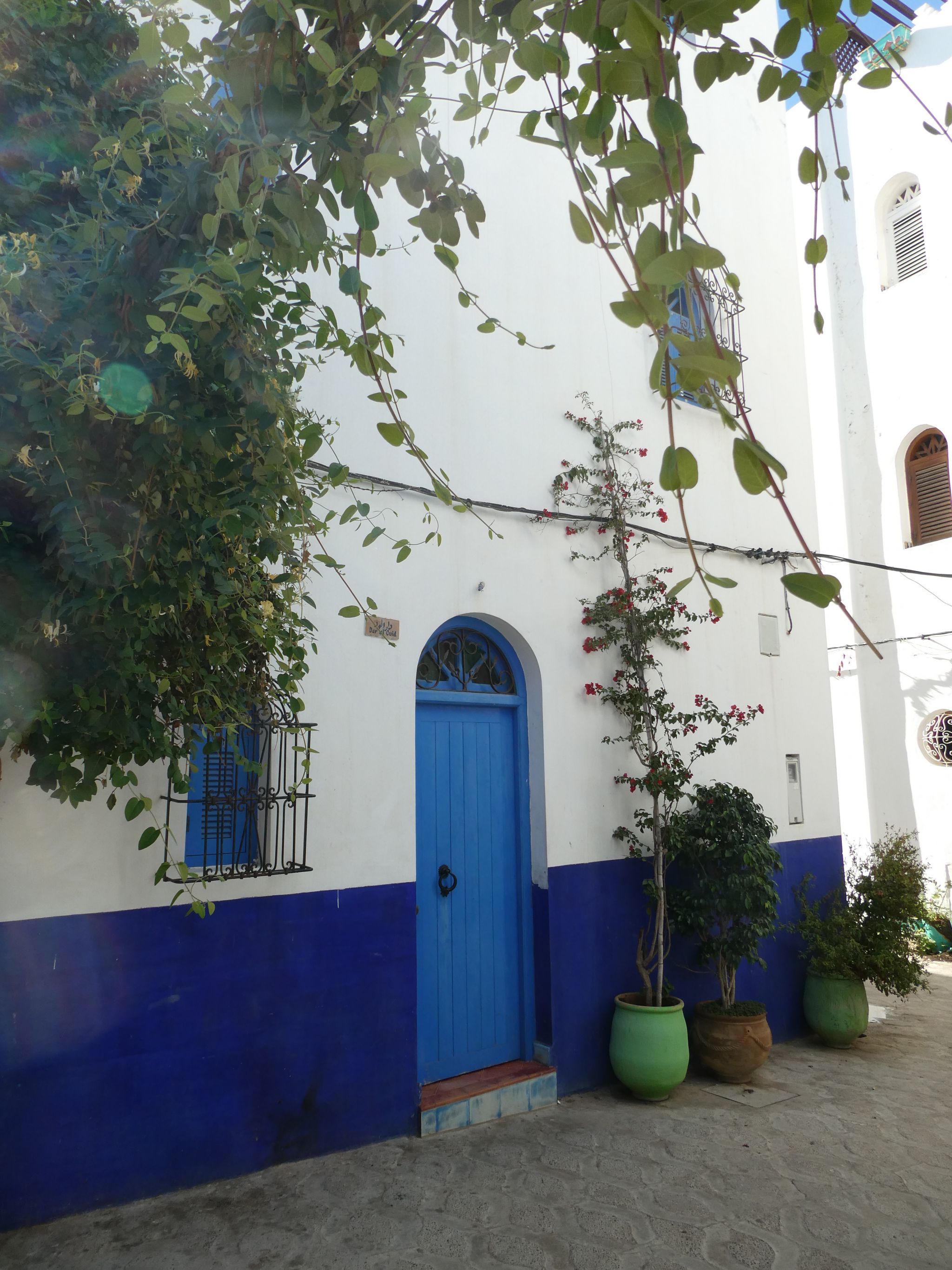 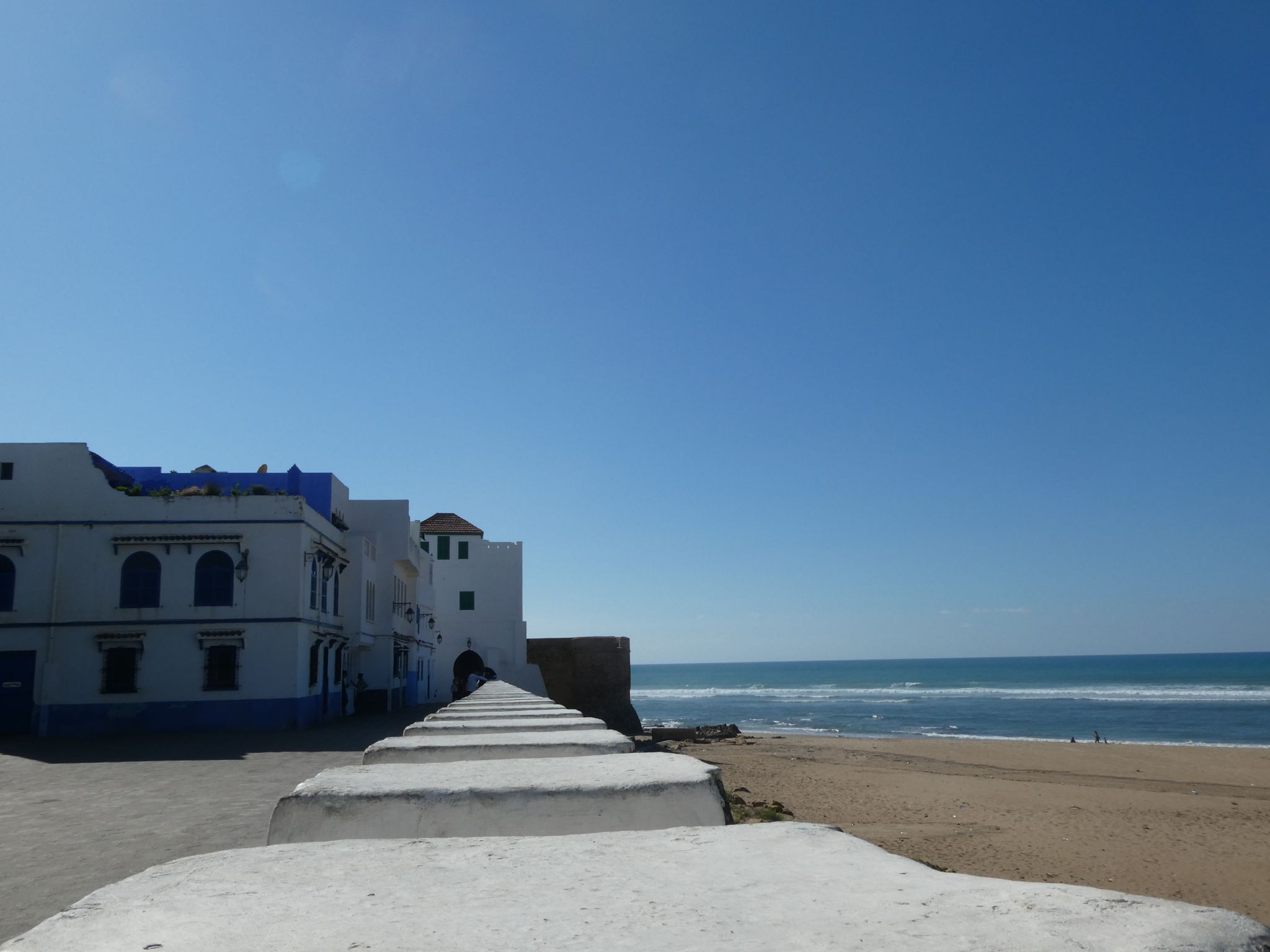 A mural festival is held every August, so a wander around the medina reveals some interesting murals as well. 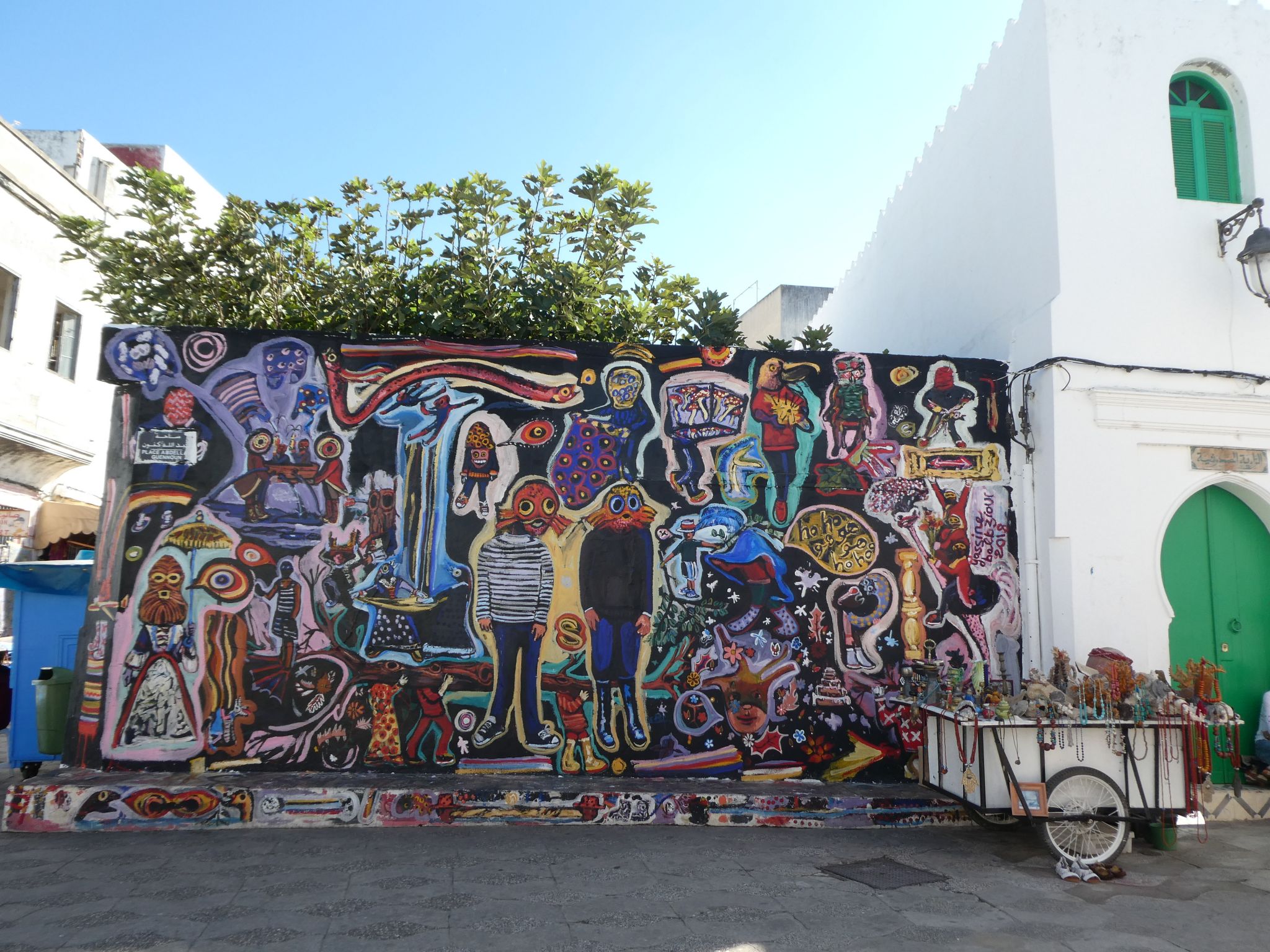 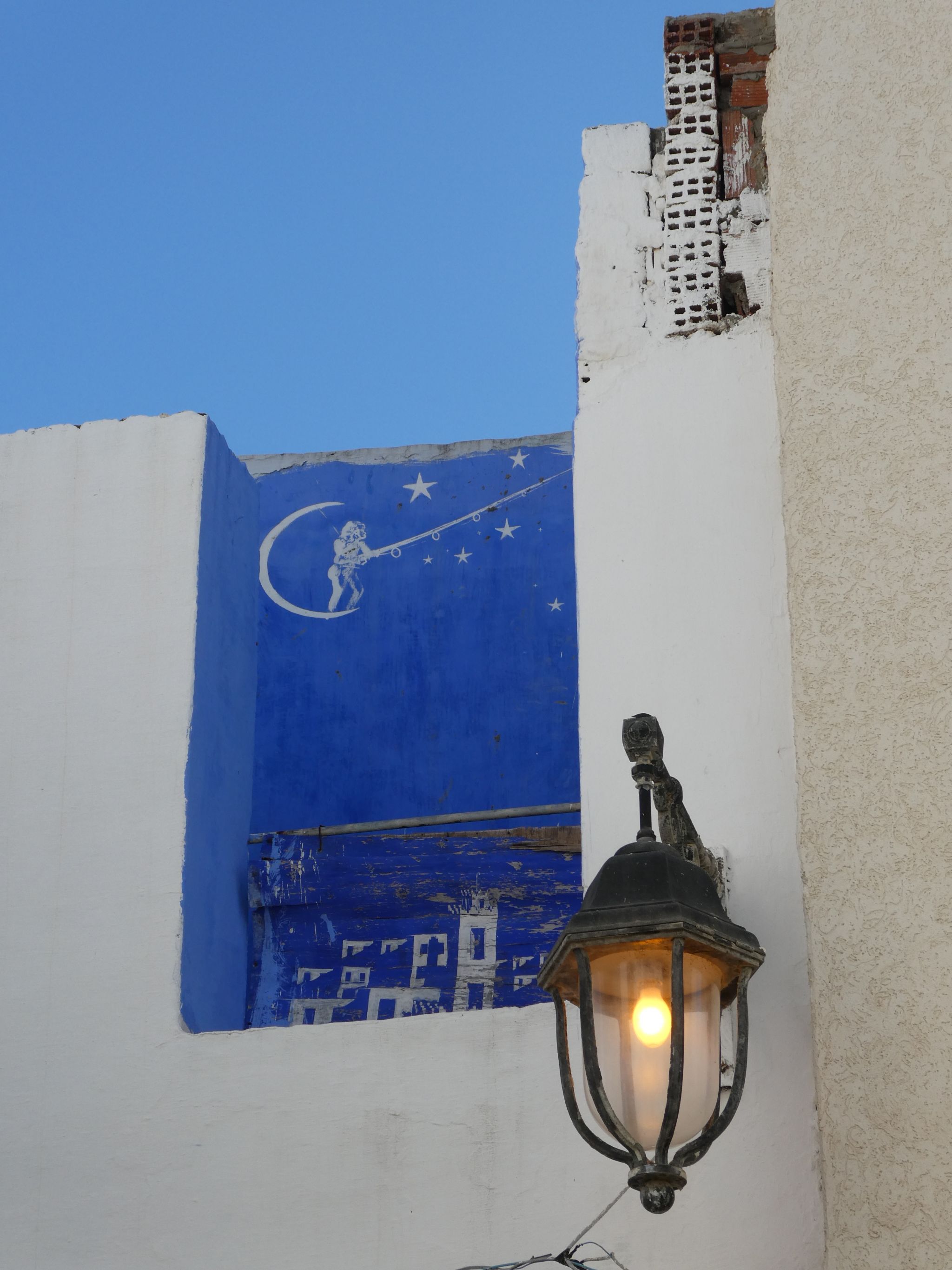 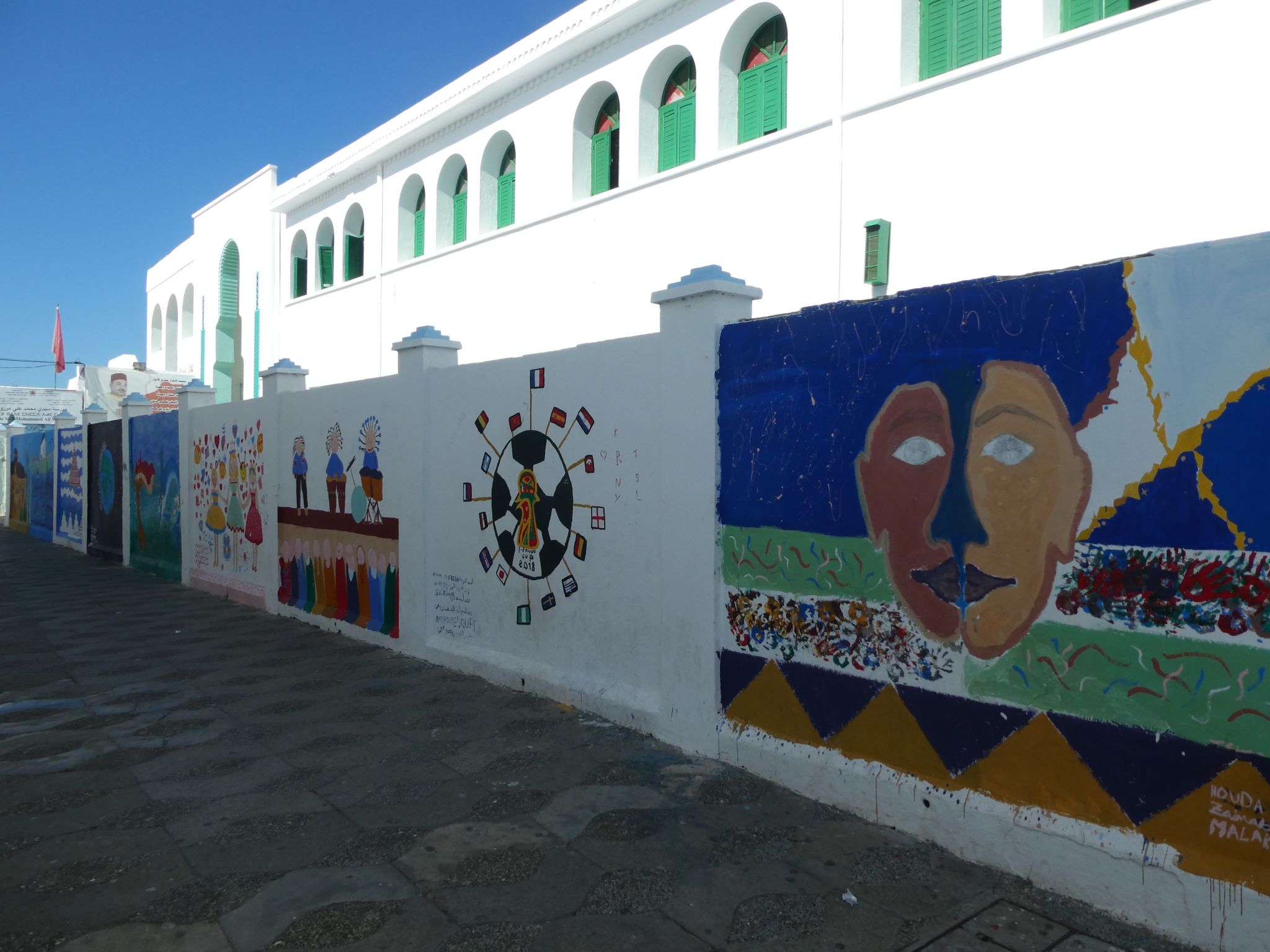 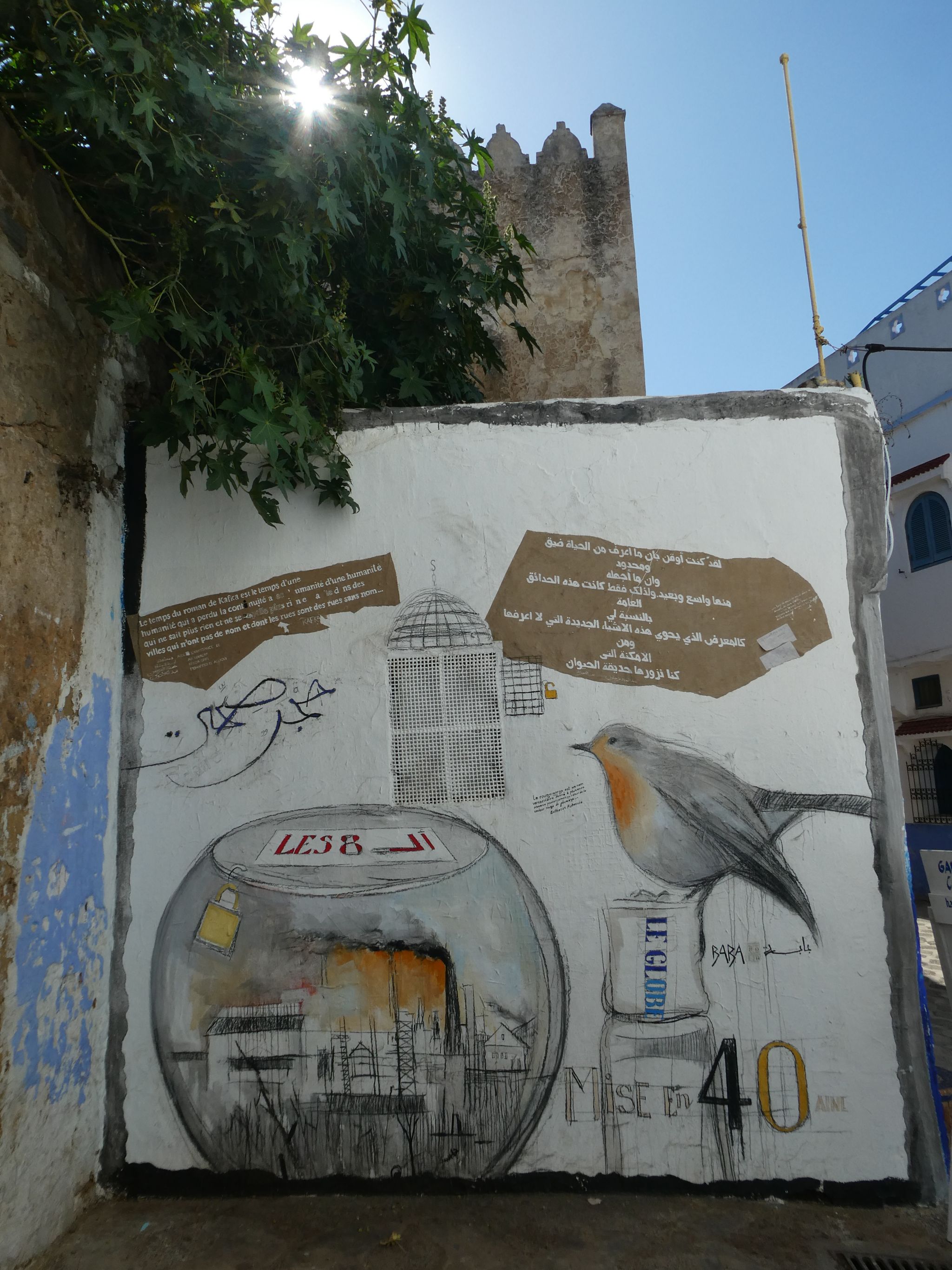 The medina is surrounded by stone fortifications constructed by the Portuguese in the 15th century.  These can best be appreciated from a walk along the sea wall which protects Asilah’s small fishing fleet, a popular early evening activity for locals. 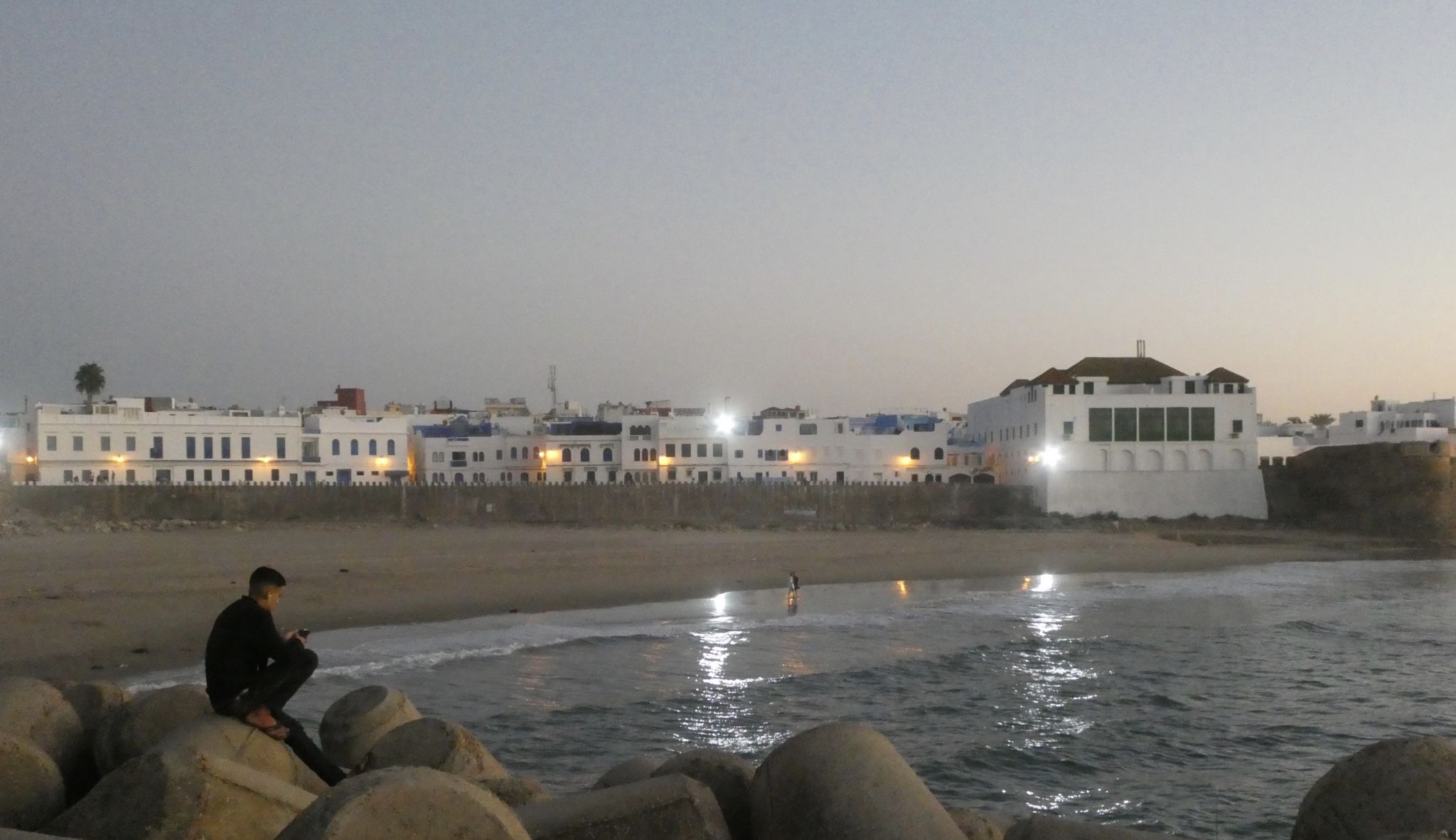 Asilah is a pleasant place to chill out in what is said to be the off season.  Few visitors but pleasant sunny weather, a pretty little medina, fresh fish – a welcome change from tagine and couscous – and Spanish style wine to match.  It was tempting to stay longer but the bright lights of Marrakech beckoned.  See next post.