Known as the Red City because the pink rammed earth ramparts which encompass the old city glow red in the dawn and the afternoon sun, Marrakesh was once the capital of an empire whose northern boundary was Barcelona in Spain. 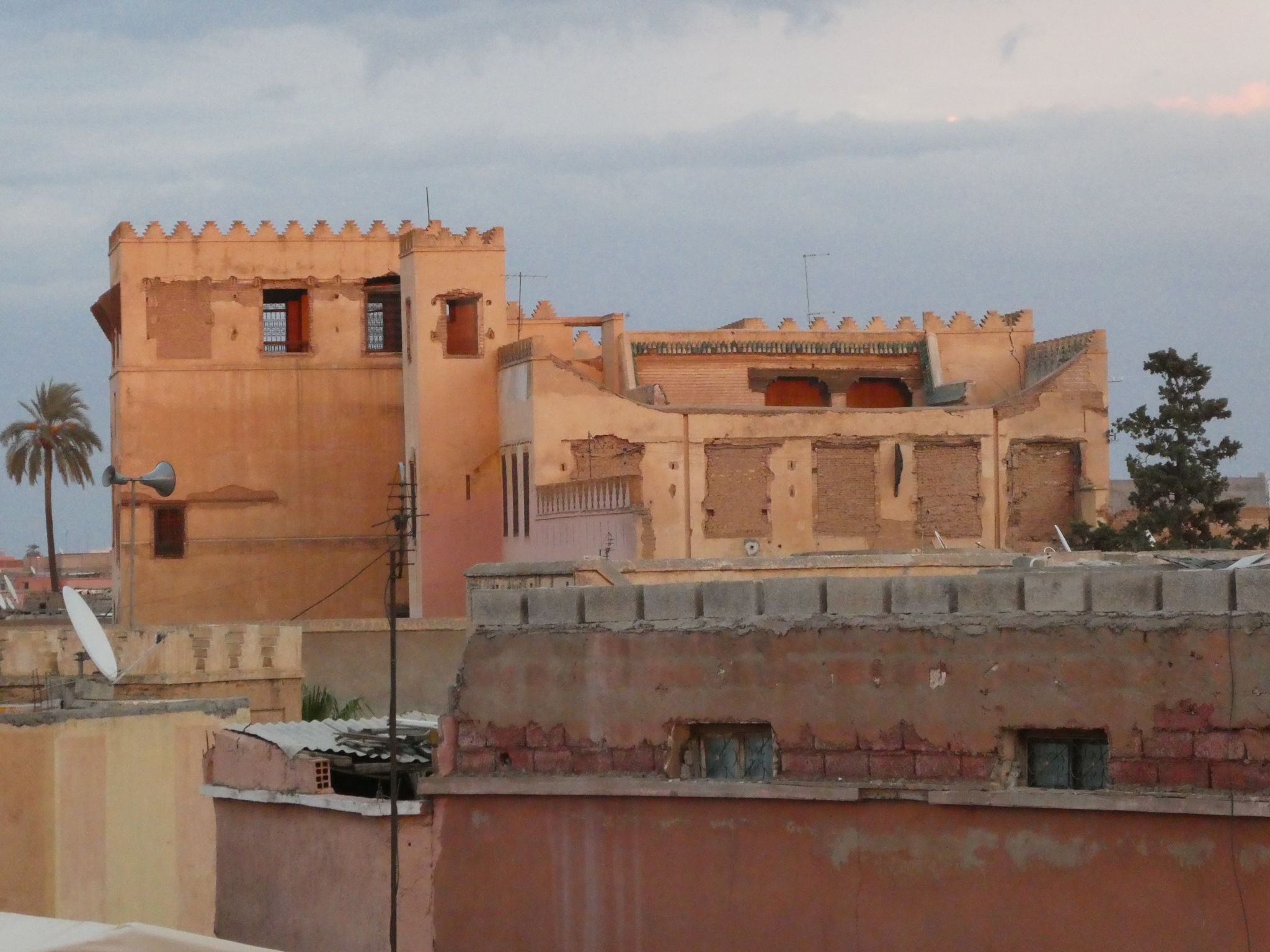 The medina in Marrakesh is as labyrinthine and confusing to navigate as the others we saw.   More so, as it is so much bigger.  It had the same jumble of souks selling clothing, carpets, jewellery, leather goods etc, but in every medina you will find something different.  In Marrakesh, it was the Souk des Teinturiers (the Dyers Souk) where you can watch skeins of cotton being dyed and hung out to dry.  It’s a riot of vivid colours. 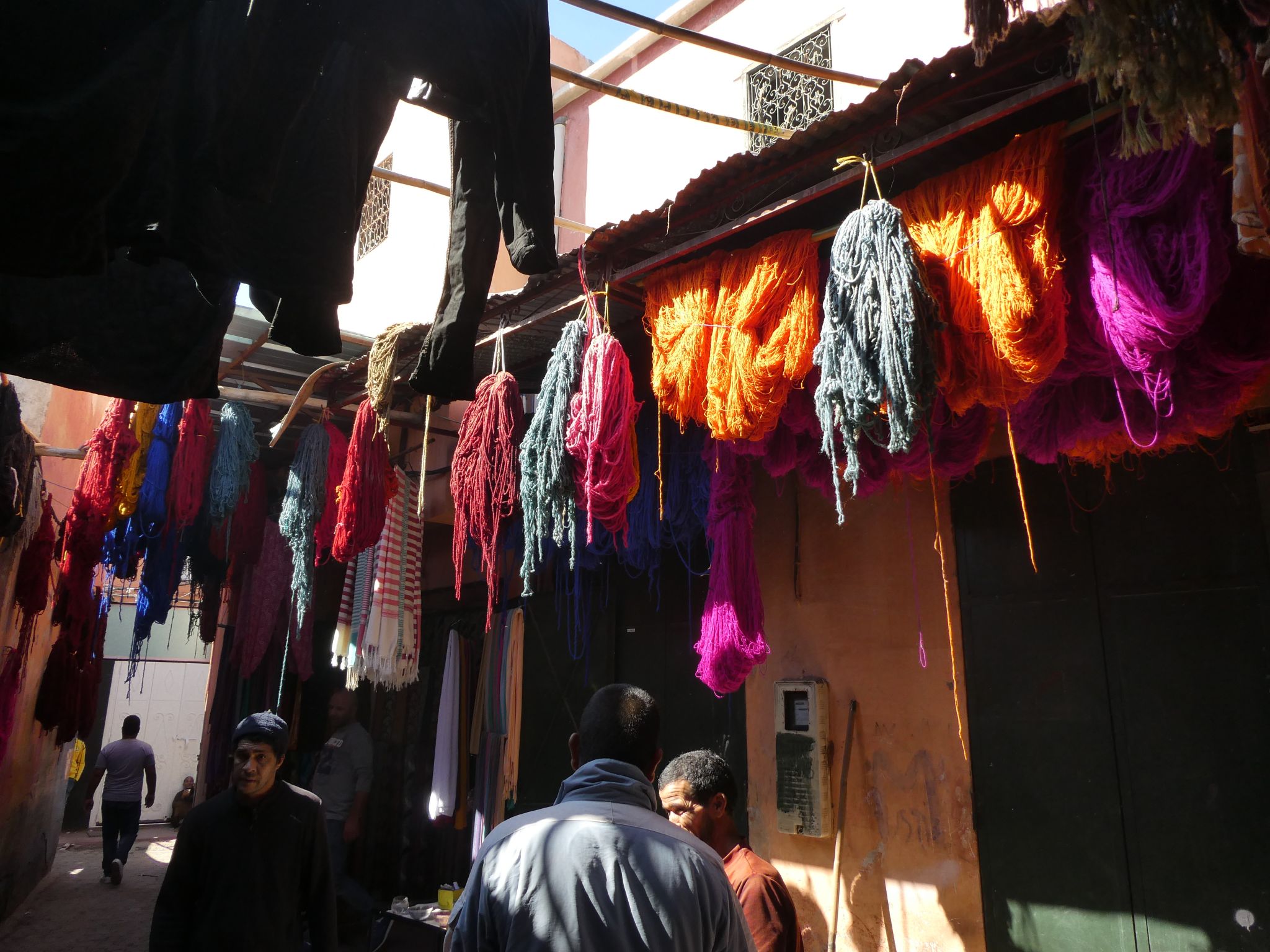 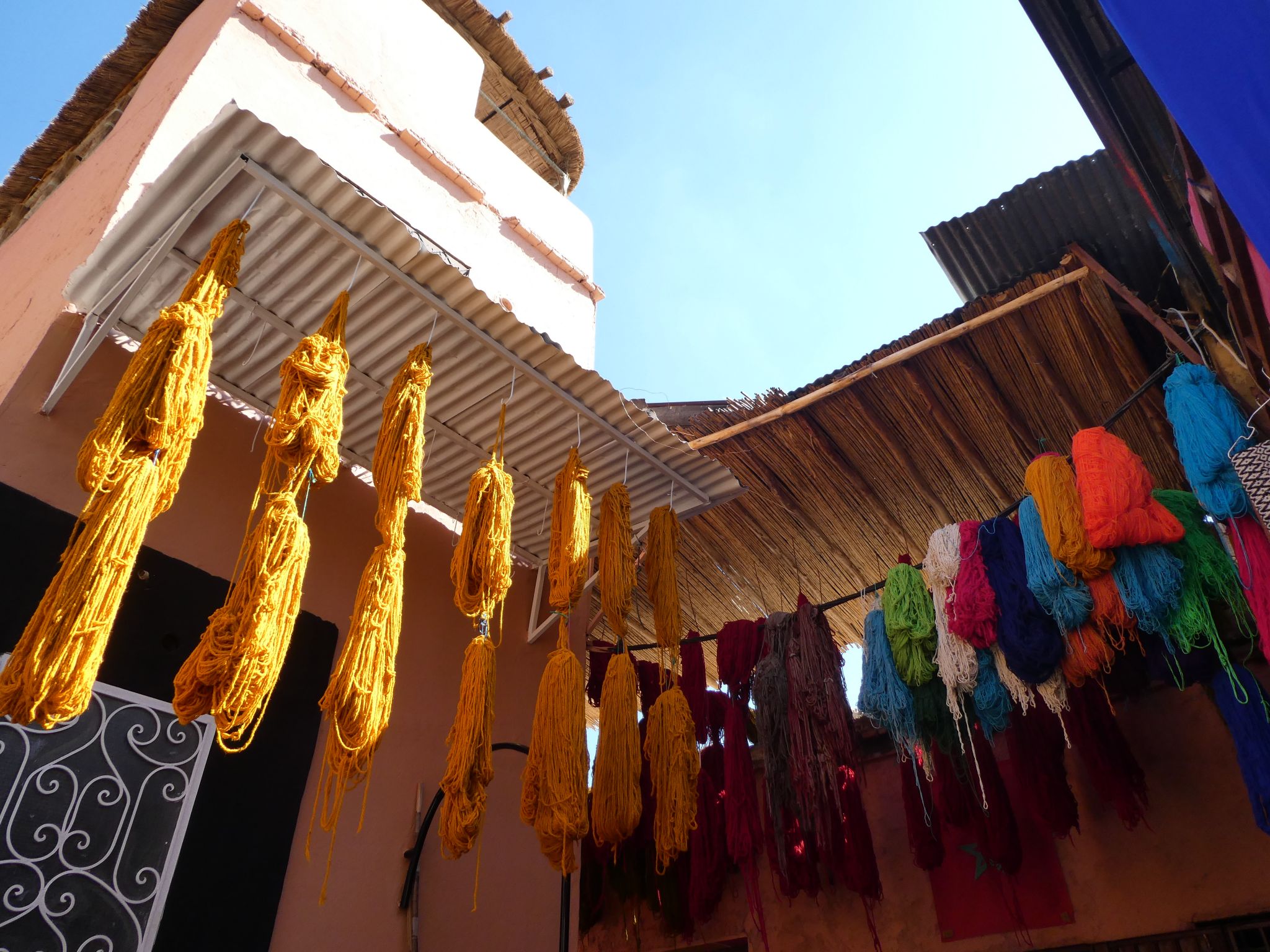 And in a lane known as Mechoui Alley, stall holders cook whole lambs in pits.  Wood stacked in the pit is burned for five to six hours, then the ashes are removed to prevent flare-ups and whole lamb is lowered on hooks into the pit.  The lid is sealed with clay and the lamb left to cook for four to five hours.

The process starts before dawn so the lamb is ready at around midday.  The cooked lamb is sold by weight and half kilo of mechoui with some flatbread, salt and cumin is more than a feast for two.  Simple but delicious. 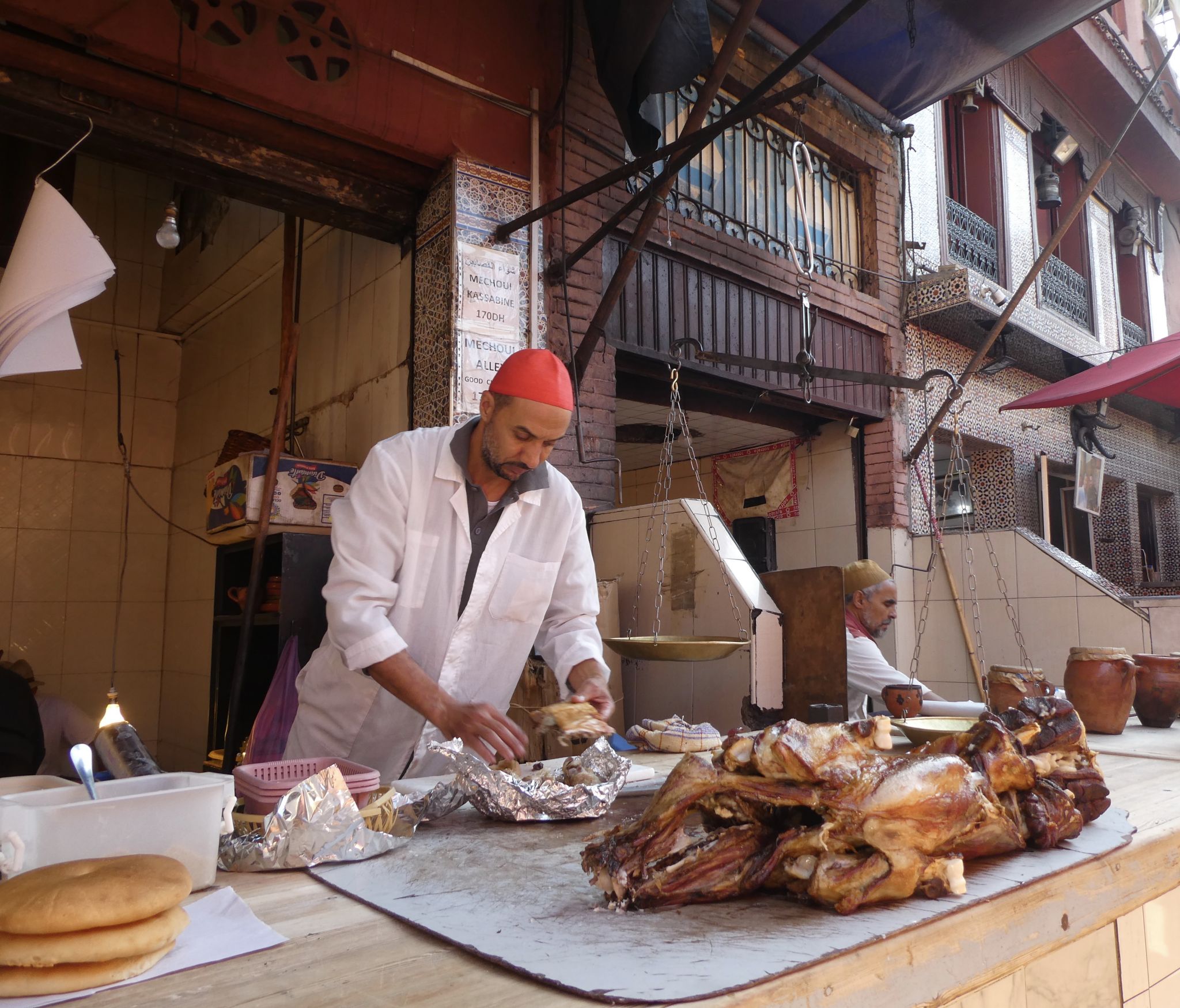 In the same lane, stalls sell lamb tanjia, a ‘casserole’ of lamb slow cooked in a terracotta pot. 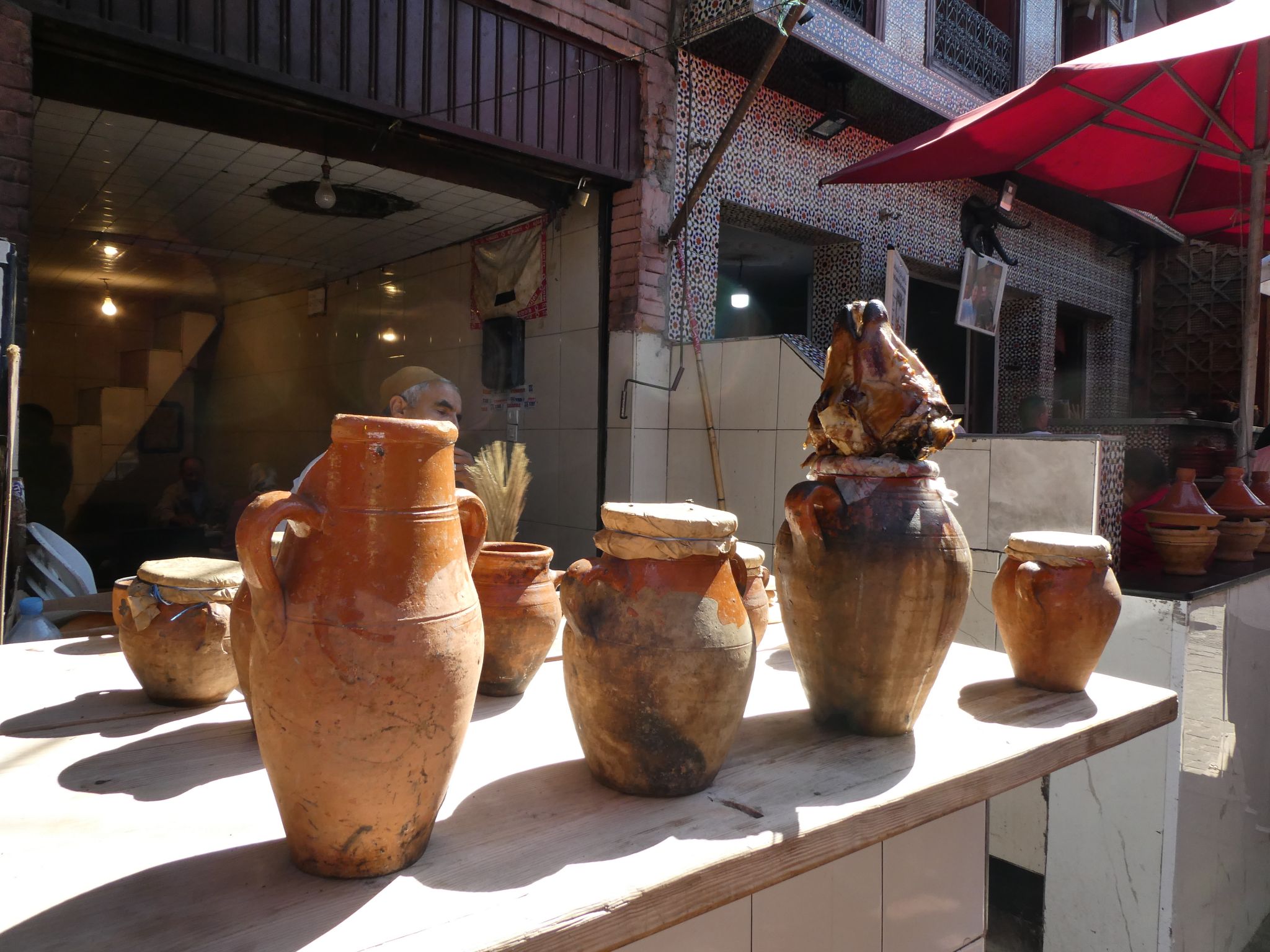 Just outside the medina, the Bahia Palace was built in the 1860s by Grand Vizier Si Moussa and completed by his successor Bou Ahmed.  The name means ‘brilliance, and it was intended to be the greatest palace of its time, capturing the essence of Islamic and Moroccan design.

The palace has over 150 rooms, perhaps a necessity when a Grand Vizier has four wives and 24 concubines.  Only a portion of the rooms have been restored for viewing by the public, but enough to get a feel for the opulence and power of the Moroccan sultanate of which Bou Ahmed was Grand Vizier and eventually, de facto ruler. 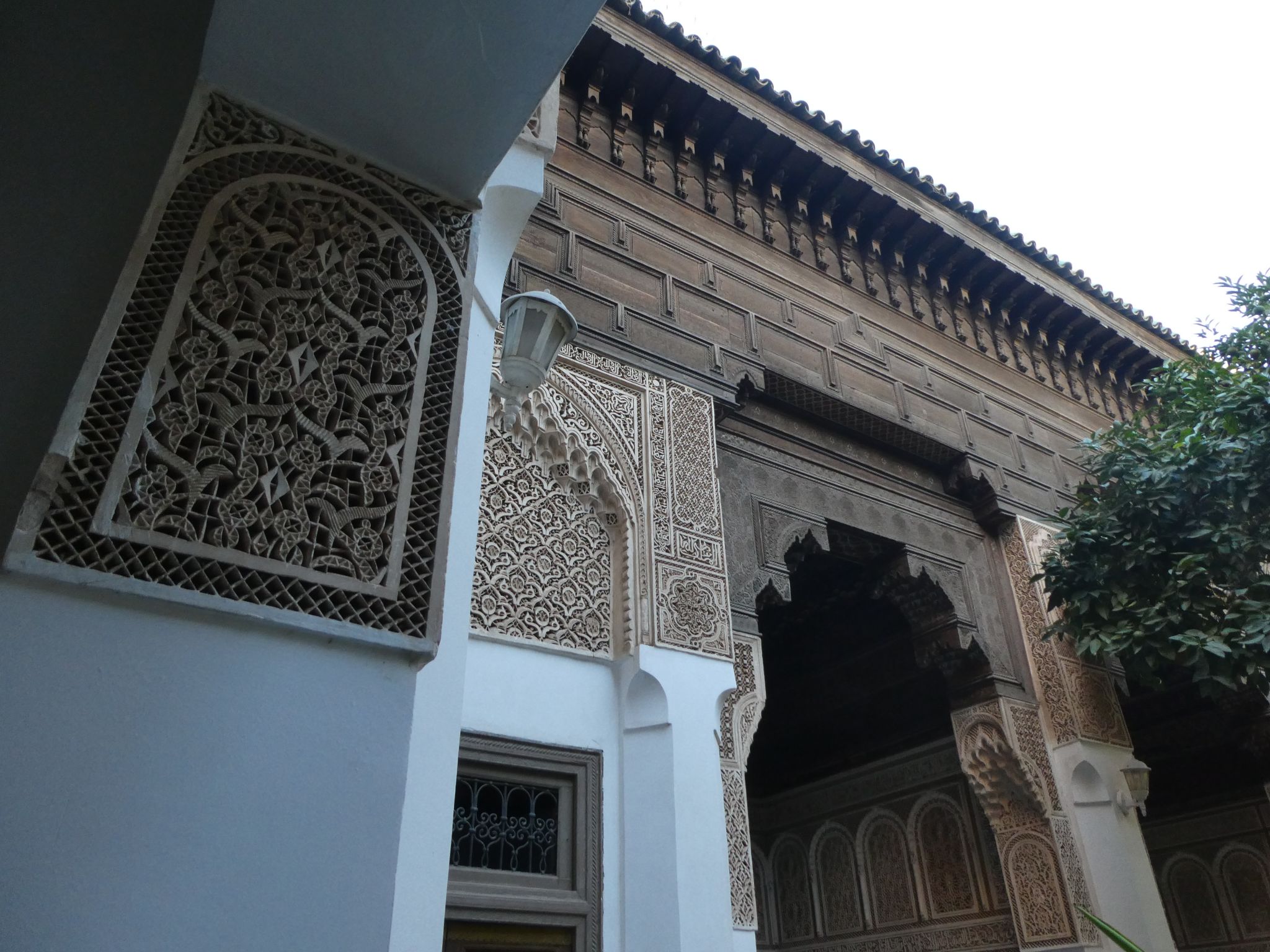 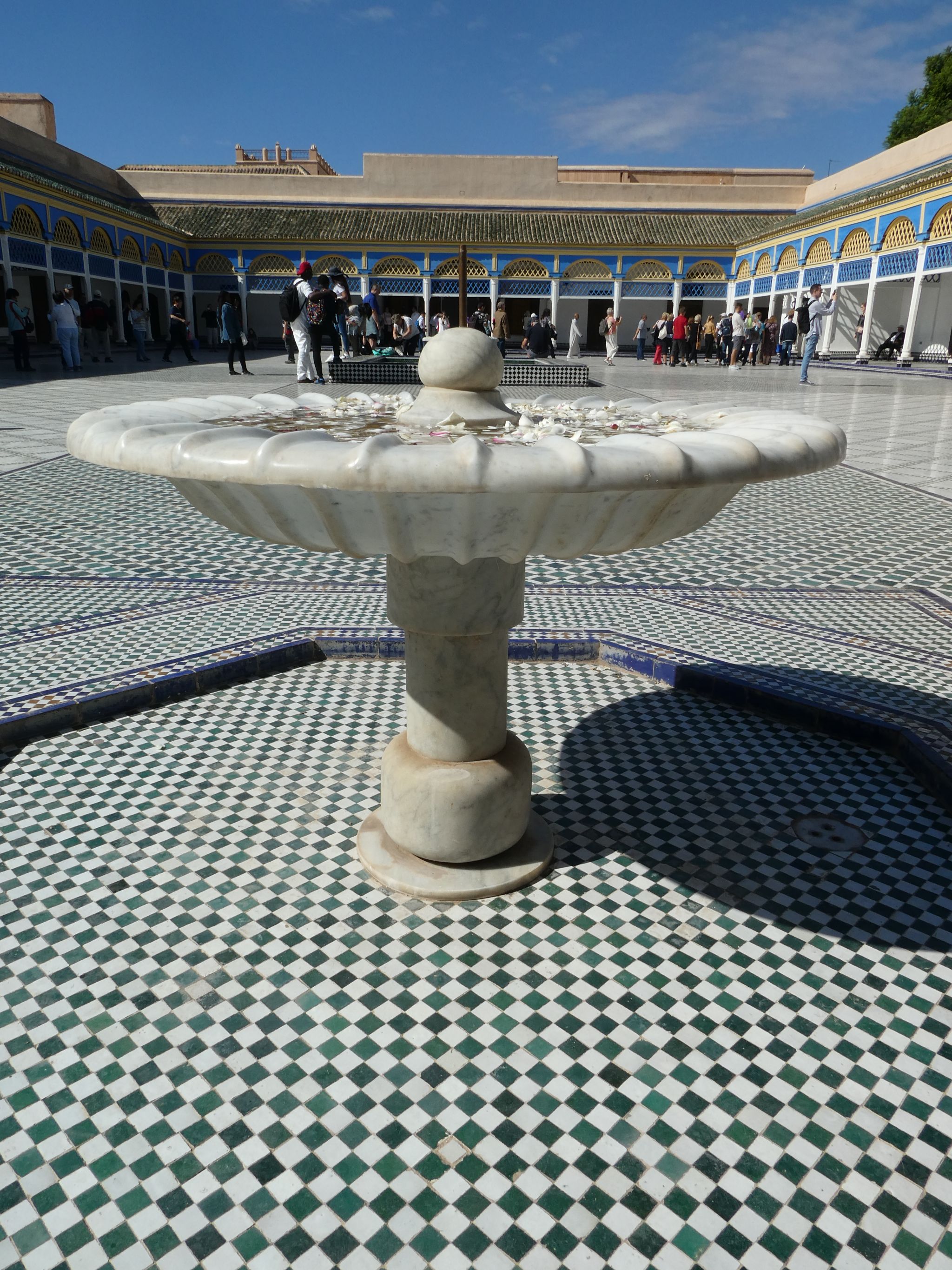 At the other end of the spectrum, Sultan Ahmed Al-Mansour’s Badi Palace was once a thing of splendour, literally paved with gold, turquoise, onyx and crystal.   Its marble colonnades are said to have been traded with Italian merchants for their equivalent weight in sugar.

It took 15 years to build but the Sultan’s court jester must have had a premonition when he joked that ‘it will make a magnificent ruin’.  Just 75 years later the Saadian dynasty of Al-Mansour was finished and so was the palace, its precious decorations looted, its stone and woods pilfered for other building projects, and the palace reduced to rubble.

The pools and gardens have been restored but otherwise it remains a ruin, its remnants perhaps a testament to the folly of hubris, used only by the storks who nest in what remains of its fortifications. 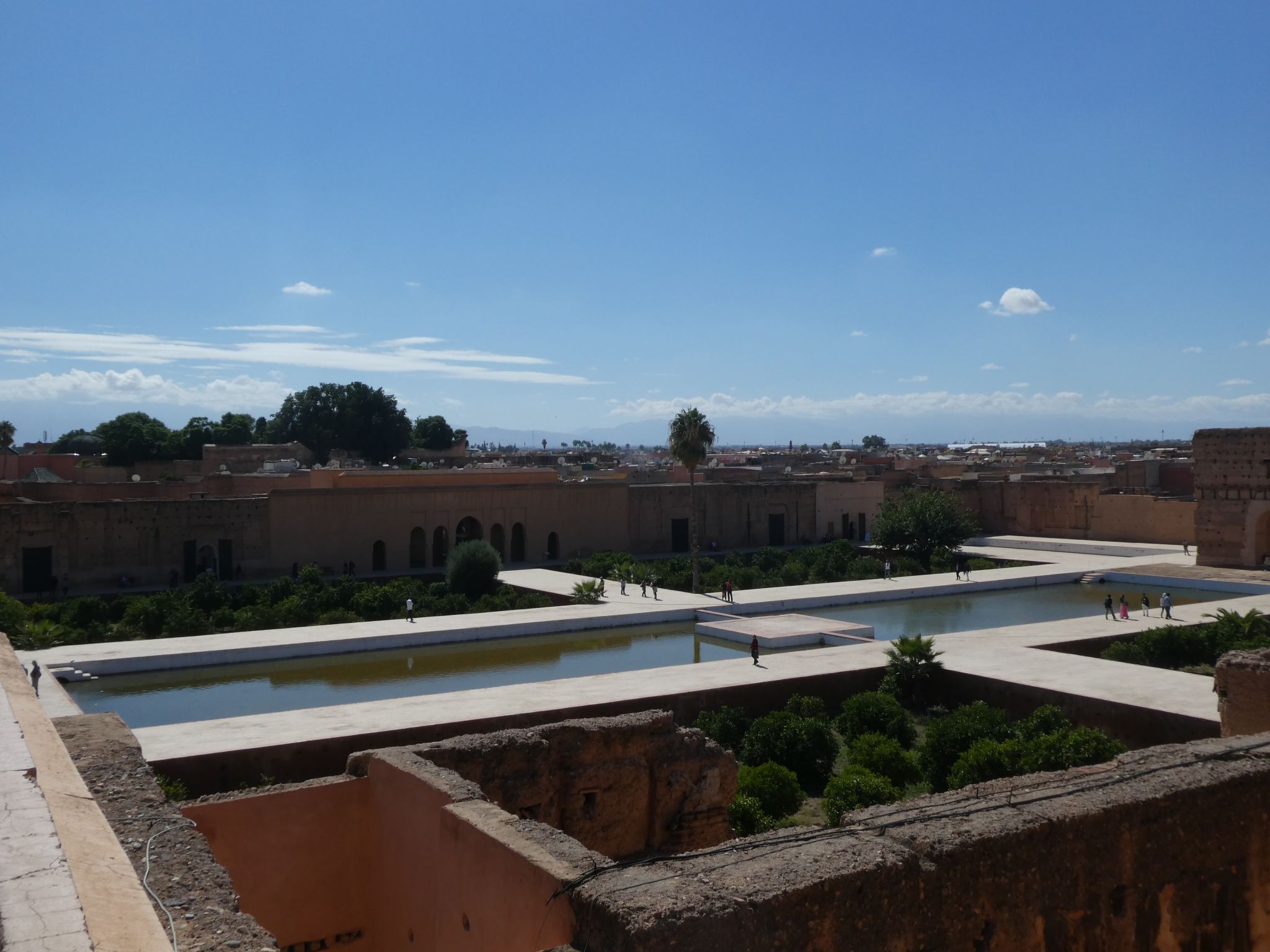 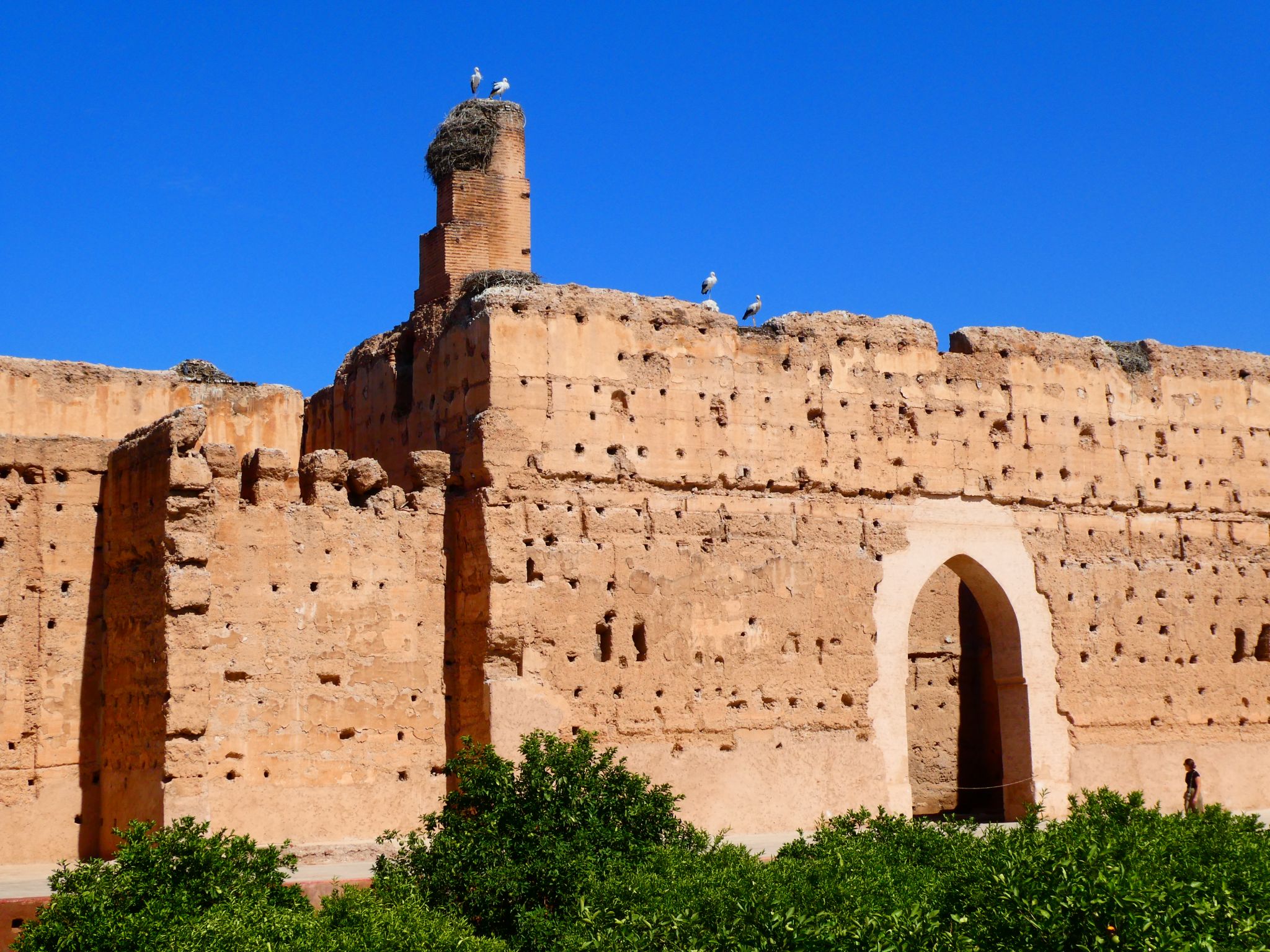 Sultan Al-Mansour had better luck with the tomb complex he built for himself and his loved ones.  Now known as the Saadian Tombs, the complex includes the Chamber of Twelve Pillars for himself, constructed of imported Italian Carrara marble and plaster decoration gilded with pure gold.  He designated other chambers for his favourite princes, relegating his wives and others to plots in the garden.  His successor walled up the tomb complex and over time it was lost to local memory.  Unbelievably, it remained forgotten and undisturbed until noticed on aerial photography undertaken by the French in 1917. 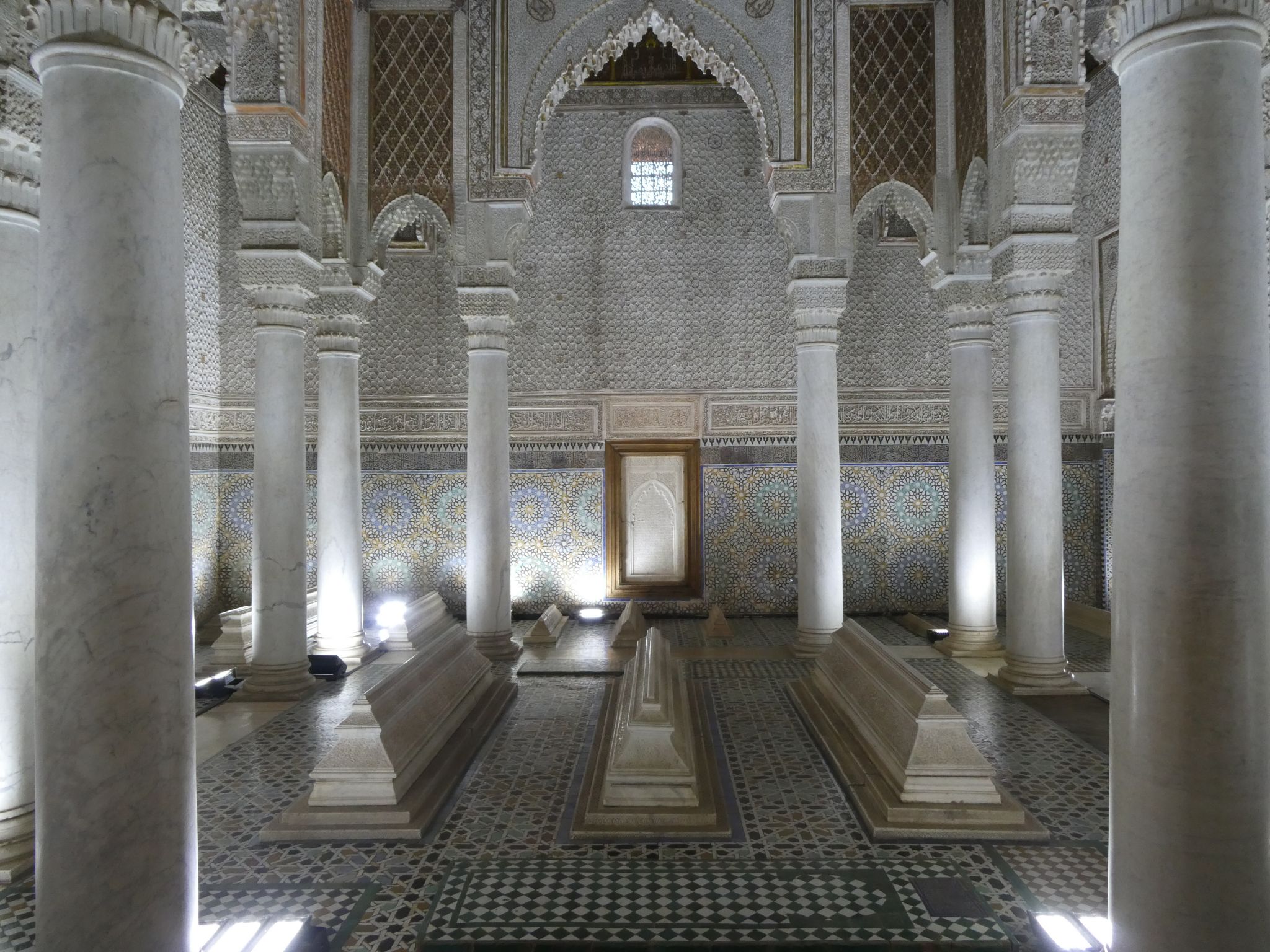 Out in the Ville Nouvelle (New Town), tourists visit the Jardin Majorelle.  This is a walled garden showcasing some 300 desert plant species from five continents, a water lily laden pool and an electric blue villa built by French landscape painter Jacques Majorelle.

The property fell into disrepair on his death and years later was slated for demolition.  Fortunately, it was purchased by Yves Saint Laurent and his partner, who spent many years dividing time between Marrakesh and Paris.  They restored the garden and villa, then gifted them to Marrakesh city.  The villa now contains a small Berber museum and the desert garden is small but interesting. 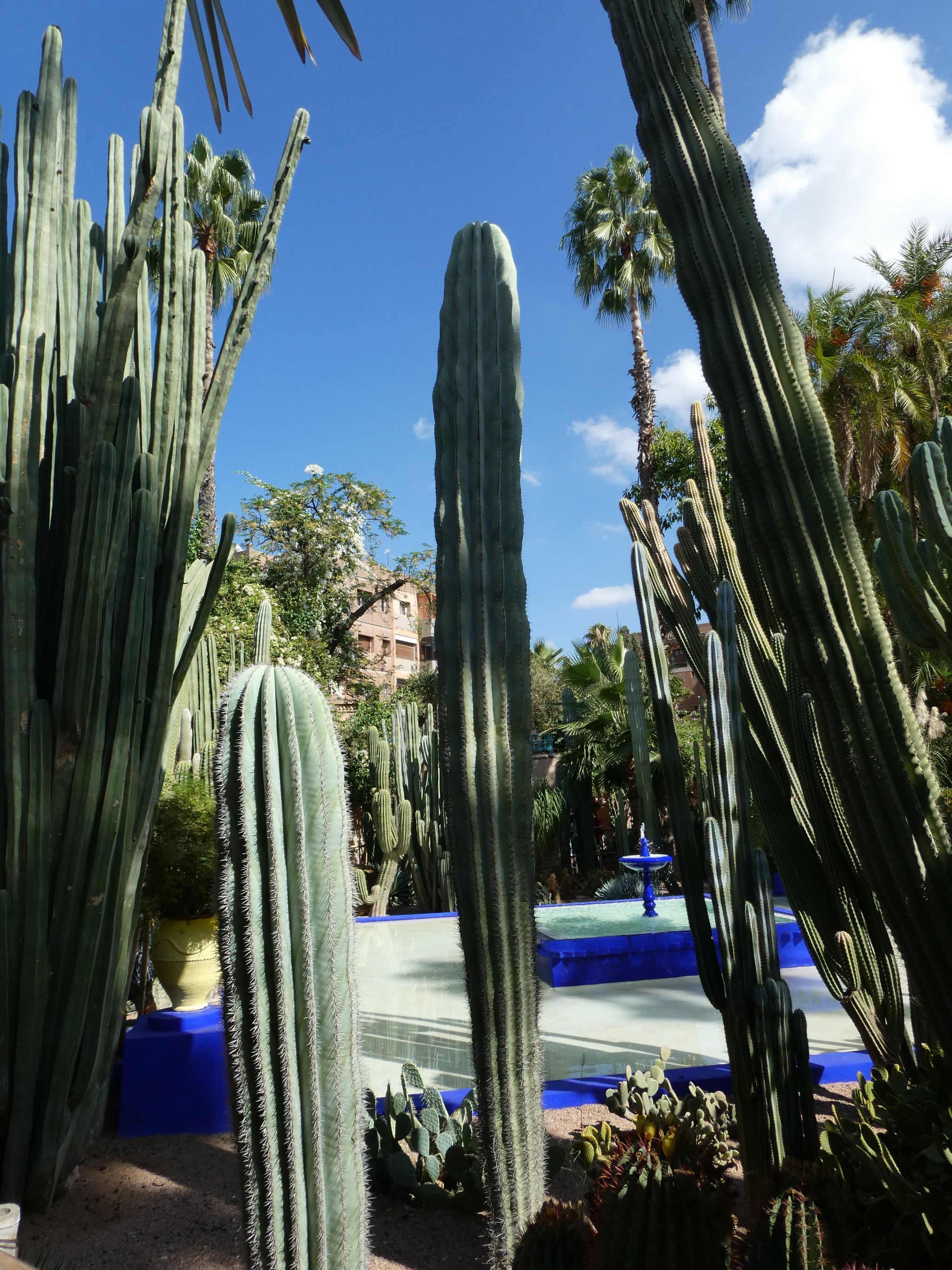 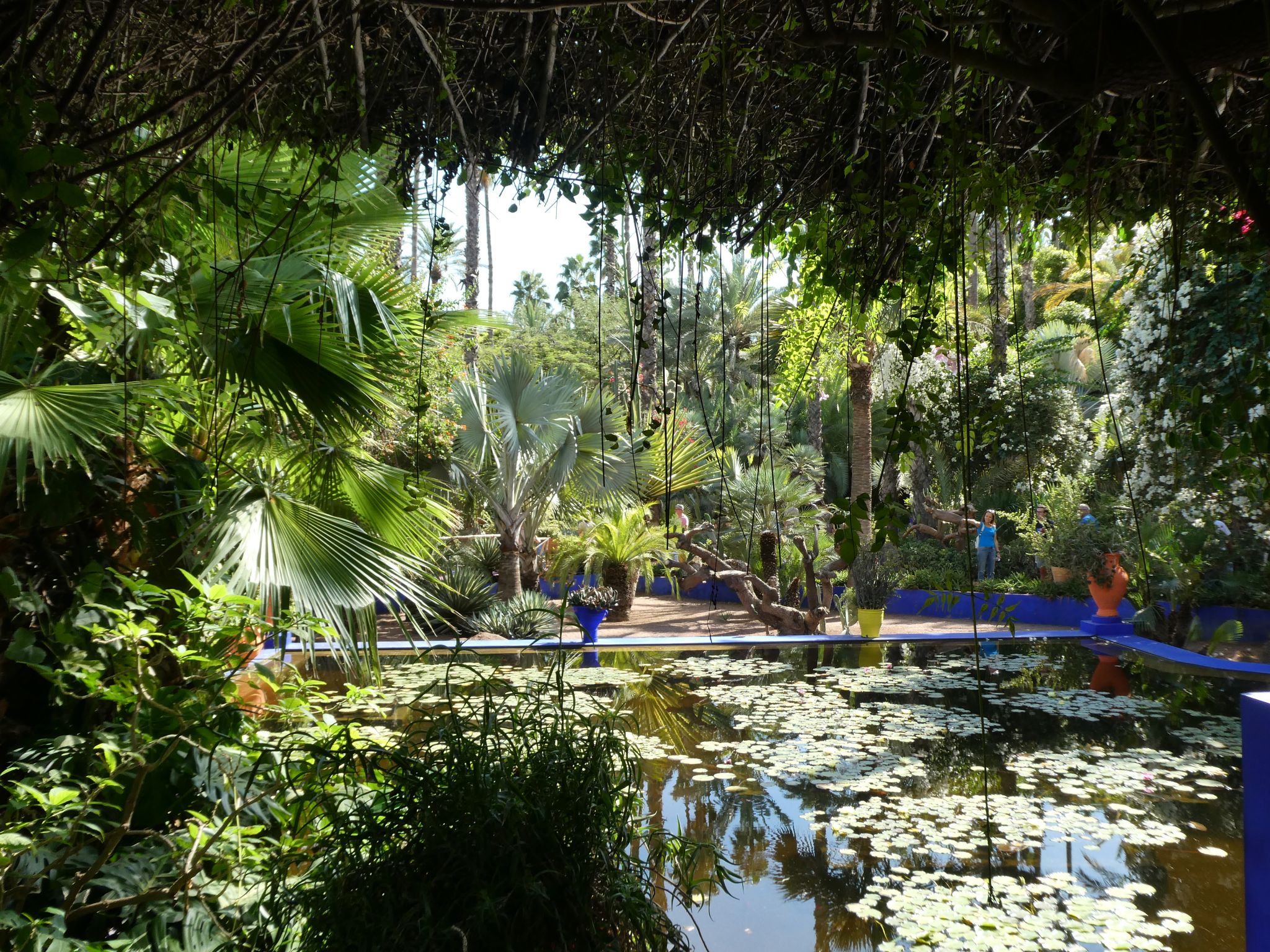 Next door a new museum dedicated to Yves Saint Laurent has a timeline in dresses and drawings, charting YSL’s fashions over his extensive career, and a theatrette runs a film of his iconic fashions through the decades.

Back in the old city, no visit to Marrakesh would be complete without a wander around the Djemaa el-Fna, Marrakesh’s iconic plaza.  It has been Marrakesh’s central public square since around 1100.  There is some contention about the meaning of the name.  It might simply mean a gathering area, but other translations have it as ‘assembly of the dead’, referring to its role as the site for public executions in the 1050s.   Later it became a market place and entertainment precinct where snake charmers, story tellers, musicians and tricksters plied their trades.

In the 1940s it was converted to a parking lot.  However, on a visit to Morocco in the 1950s,  Eleanor Roosevelt attended dinner with King Mohammed V and commented that she was looking forward to visiting the square, which she had enjoyed on previous visits to Morocco.  The King informed her the square was now a car park, and her disappointment was ‘so intense’ that the King promised to reinstate it at the first opportunity, which he promptly did.   The power of celebrity!

The square is enormous and by day, juice stands and market stalls line its perimeter. 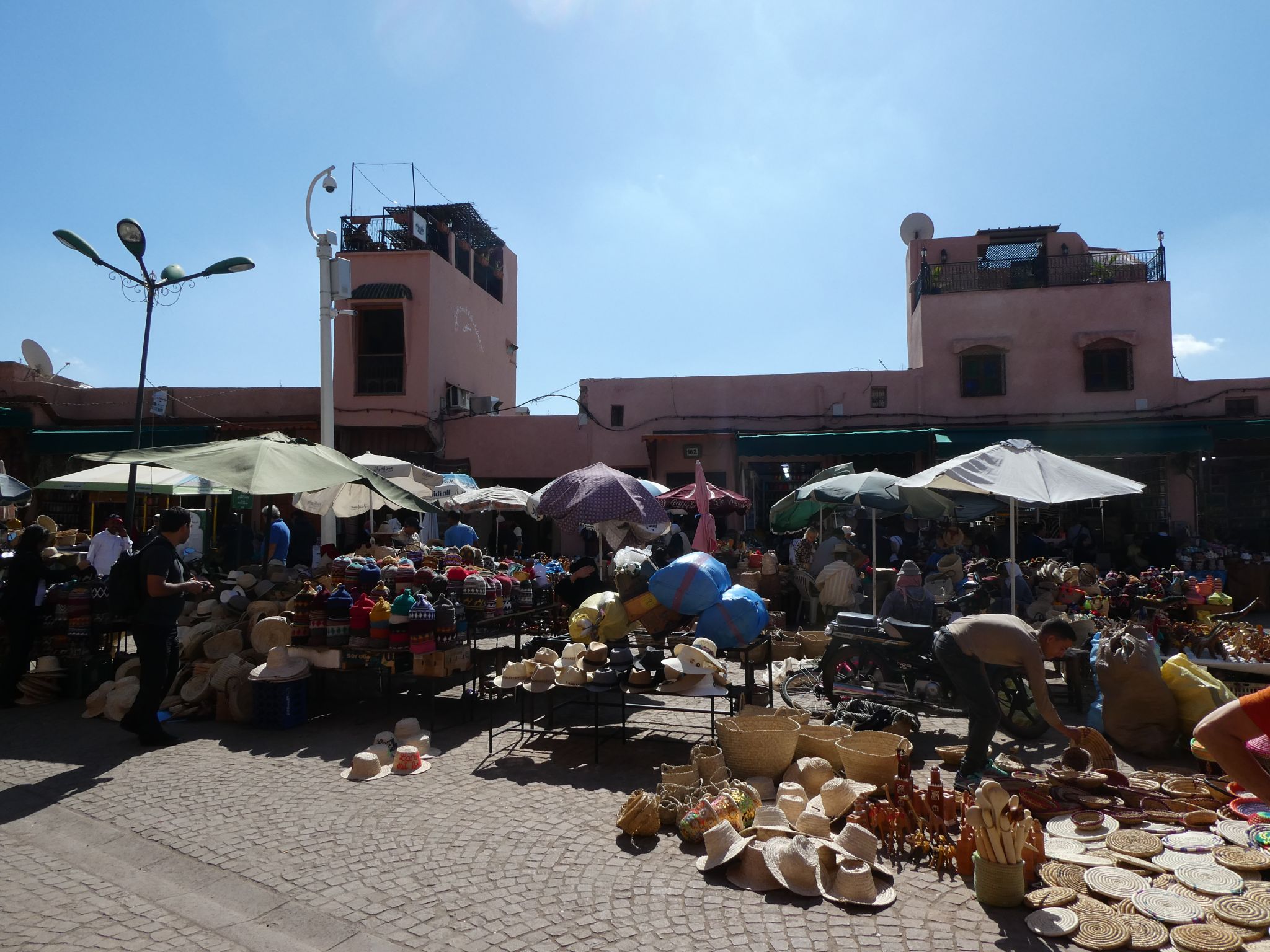 By night, temporary grill stalls set up, sizzling sticks of seafood, lamb, vegetables and other delights.  There are musicians, games of chance, snake charmers and all manner of other entertainments. 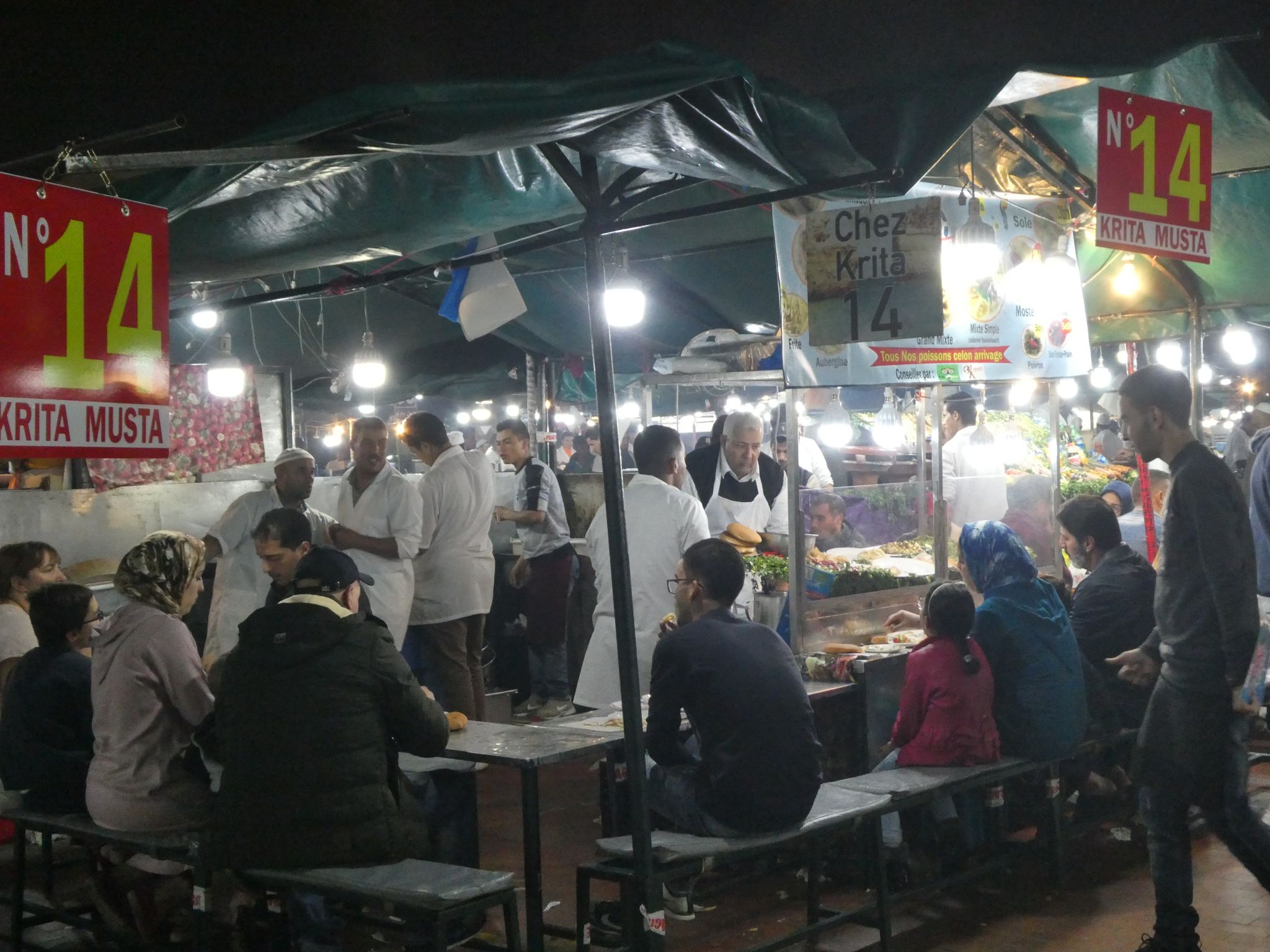 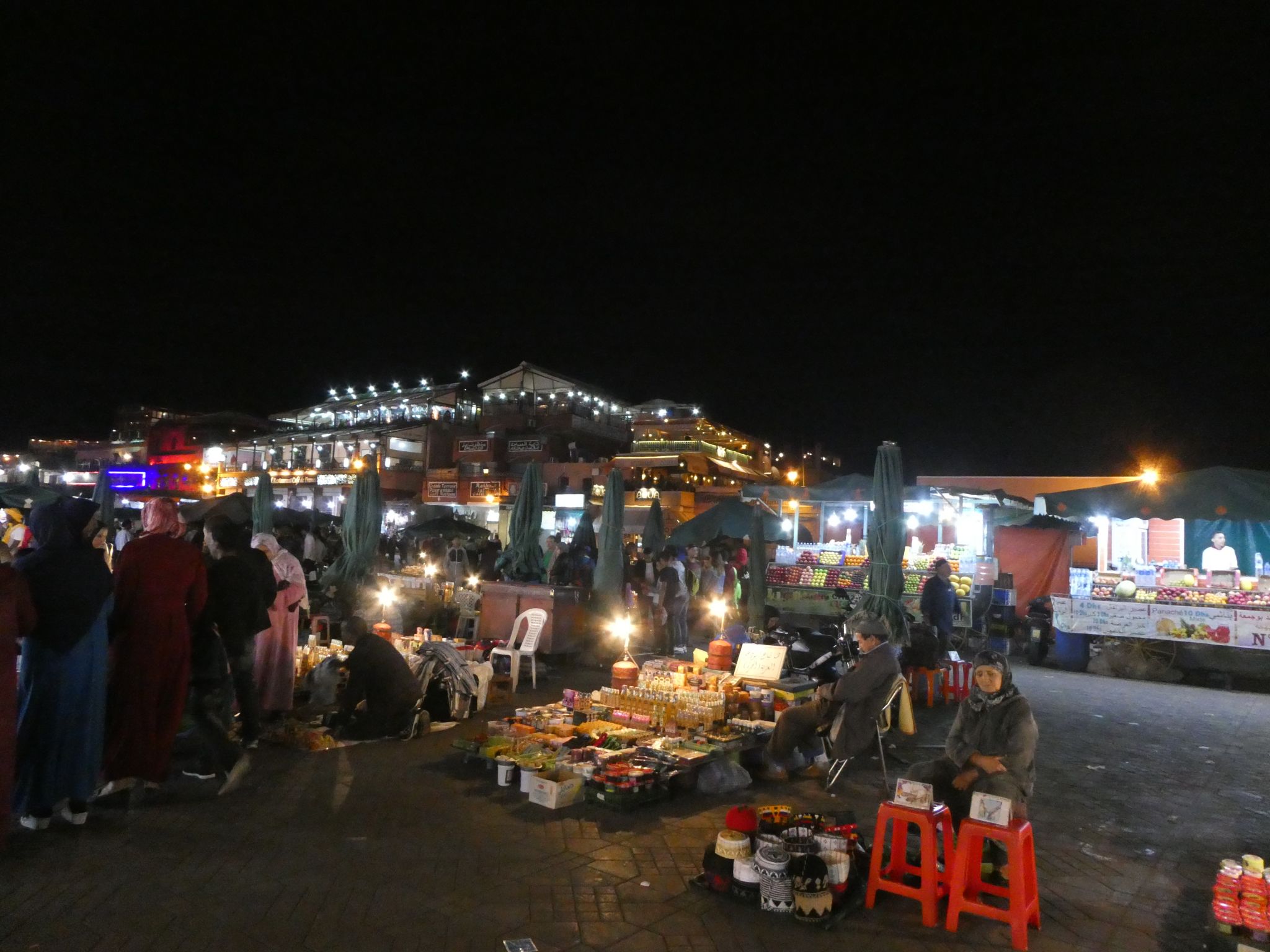 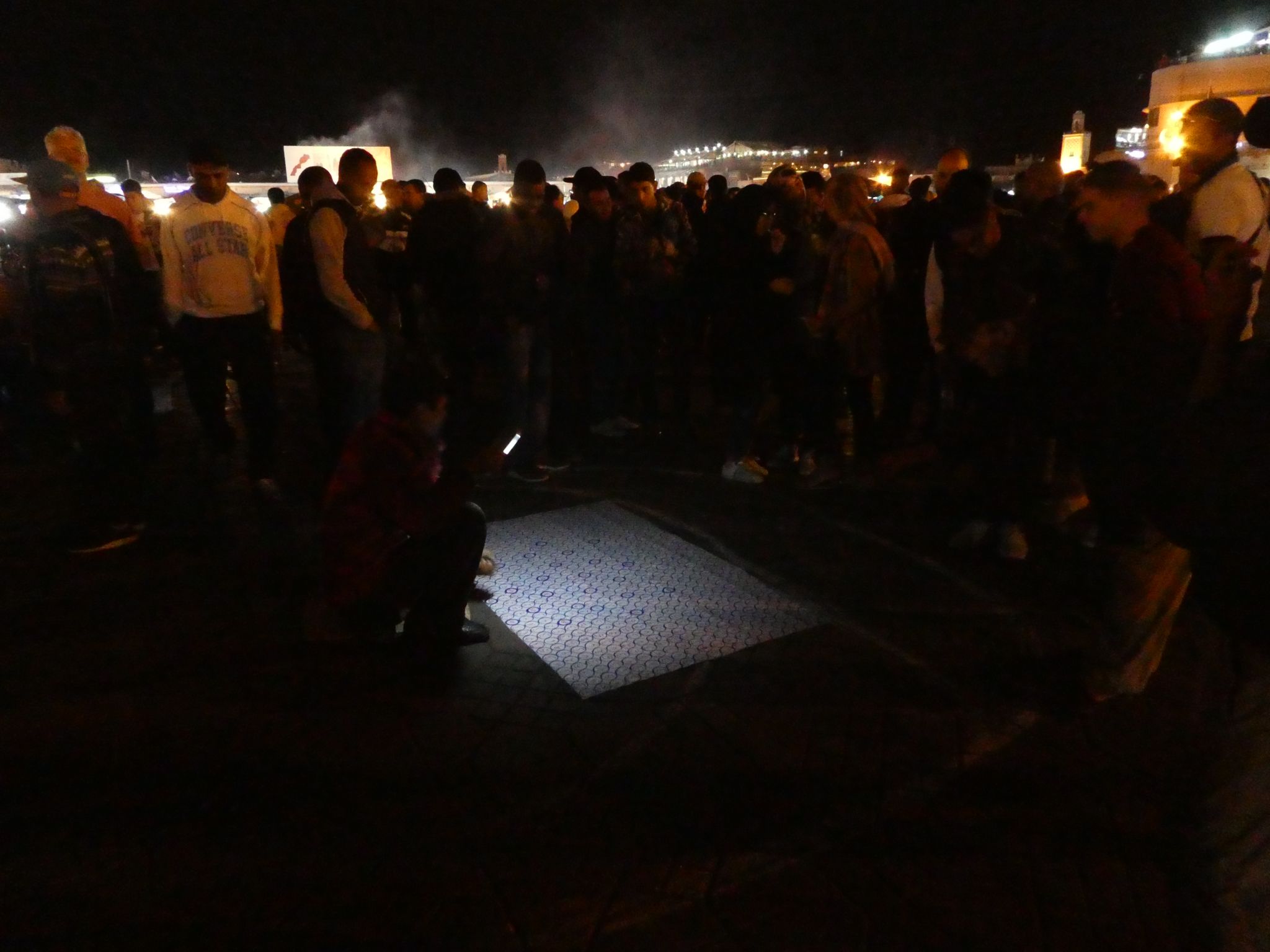 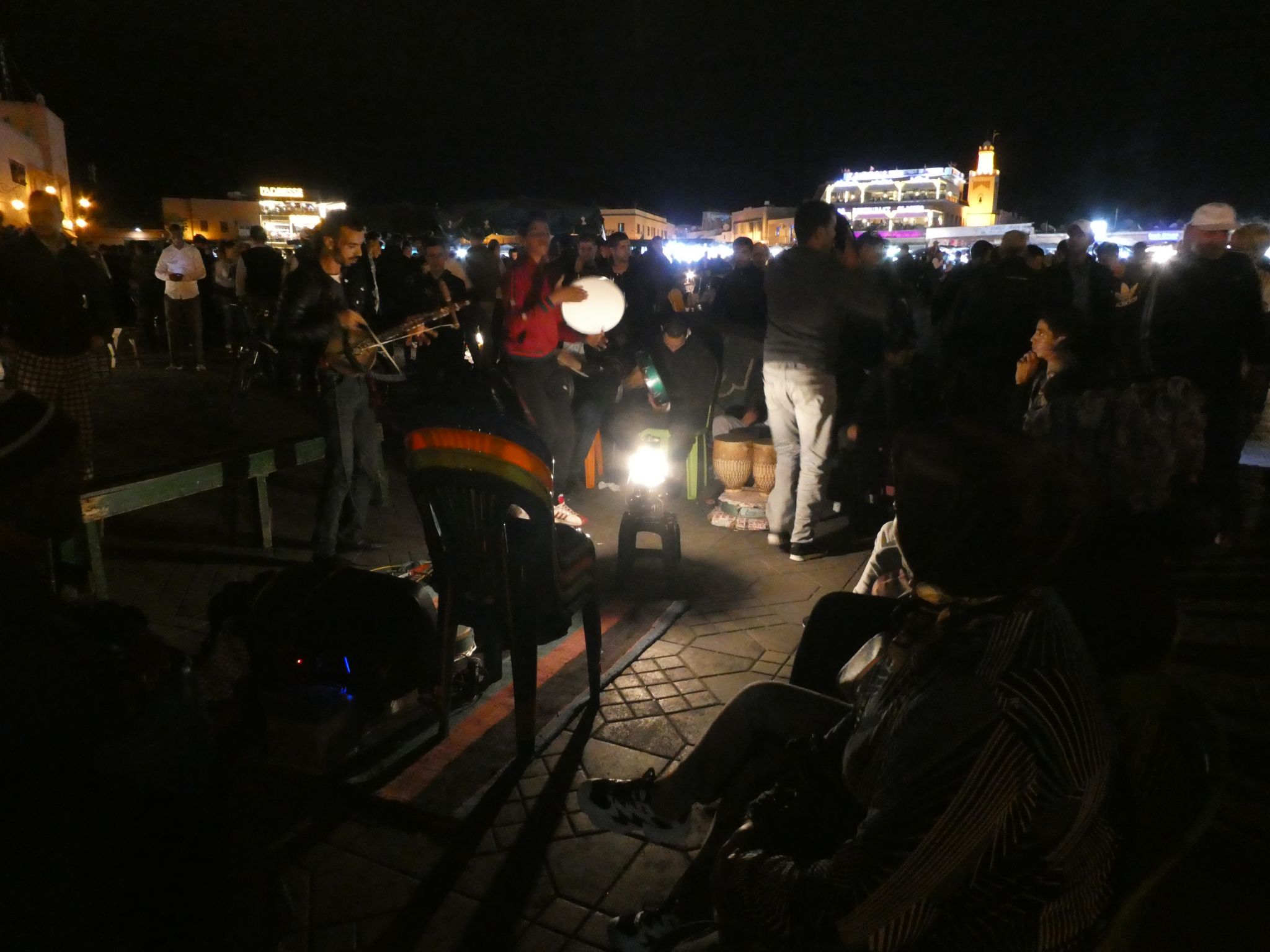 Like the medina, the square is chaotic, noisy and very, very mercantile.  Marrakesh is the most touristic of the Moroccan cities we visited and, perhaps because by now we’d seen quite a few of them, for us it didn’t have the exoticism which is generally ascribed to it in tourist literature.  But worth a look!

For many visitors to Morocco, Marrakesh is their first port of call.  For us, it was nearly our last.  We left Marrakesh for Casablanca, our last Moroccan destination before moving on.