We headed south from Sousse on a rattling old train on which a ‘first class’ ticket just meant you actually got a seat.  The train was late leaving Sousse, and at times was so slow we could have hopped off and jogged alongside it.  A tedious nine hours later, we arrived in Tozeur, south west Tunisia.  It’s the end of the train line, surrounded by desert and salt pans, the last town of any size before the Algerian border.

In times past, Tozeur was a stopping point for caravans travelling between the Sahara and the northeastern Mediterranean coast.  Later it was an important town on the northern African slave trading route.  In both cases because it is situated in an oasis.

Describing it as an oasis may be technically true, but conjures up an altogether far too picturesque image.  In reality, it is a dusty town with pot-holed roads and too many two stroke motorcycles.  It has a very large palm grove with over 400,000 date palms, also coated in dust, and it’s date harvest time.  You can hire a horse and trap to take you for a ride through the palm groves.  We went for a walk instead. 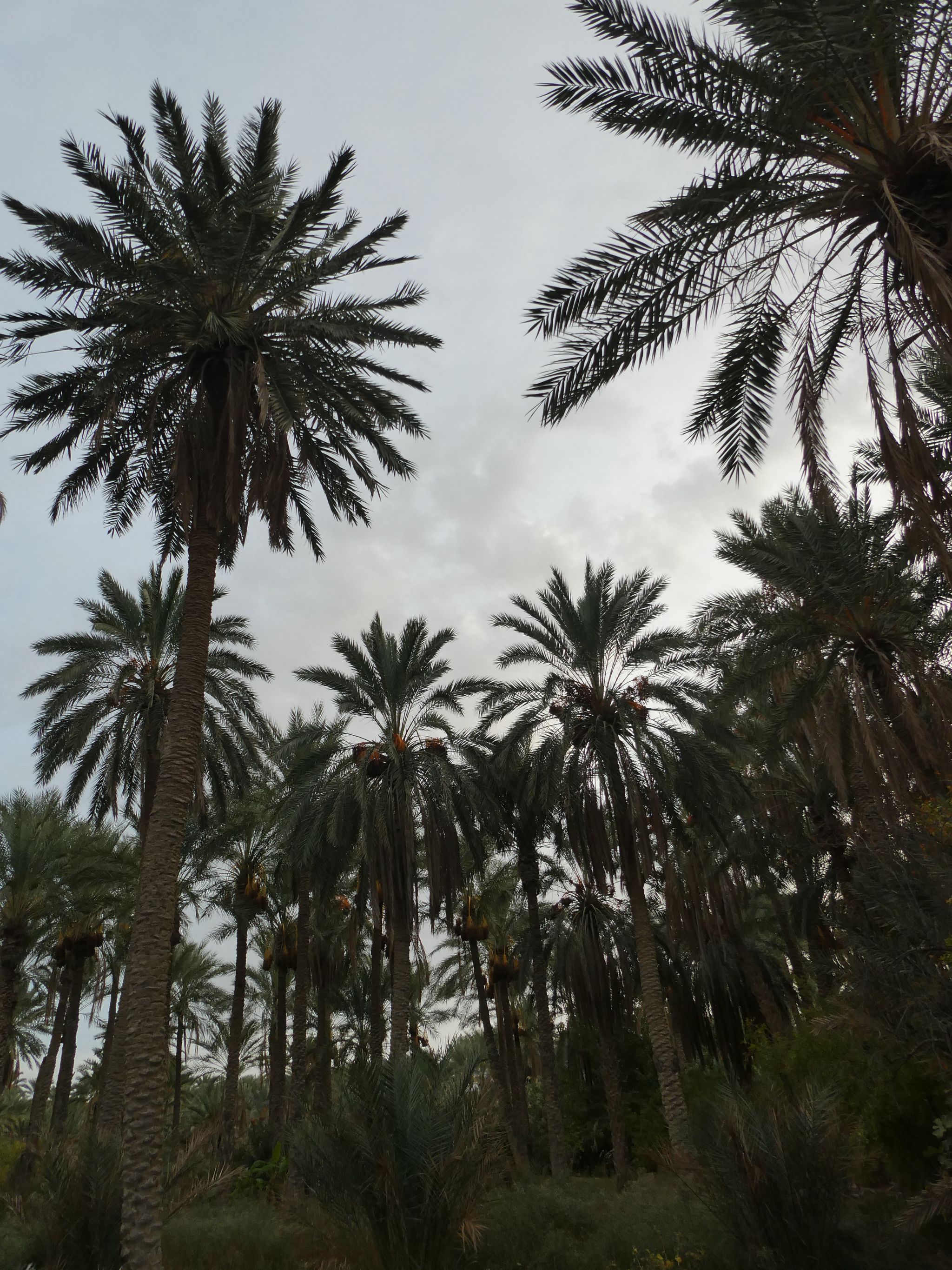 We stayed in a nice little hotel on the edge of the palms and all through the night we could hear packs of dogs howling.  Made a mental note not to stroll in the grove after dark.

Beyond the palm grove, the landscape initially is small plants supporting camels who range around freely.  The greenery runs out quickly and after that it’s just a stony, dusty desert. 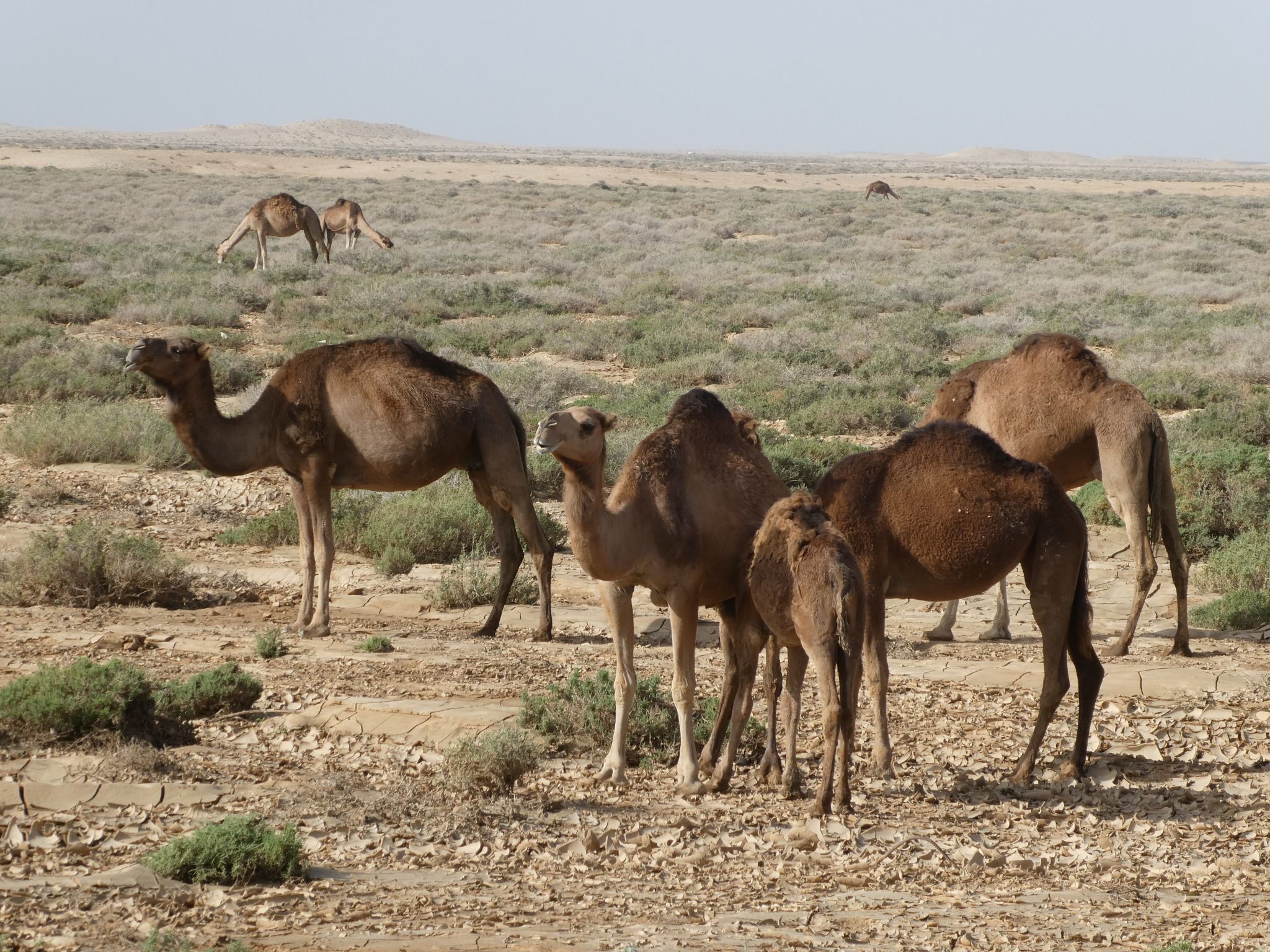 Tozeur’s attractions lie not in the town itself but in the surrounding desert.  It is the jump off point for the upland oases of Chebika, Tamerza and the Midès Gorge.  There is no public transport out here so we hired a 4WD and driver for a few days.

Chebika is a small oasis in the hills of Djebel en Negueb, an offshoot of the Atlas Mountains.  It has a small community of only a couple of hundred people, but visitors come for the lovely pool and waterfall. 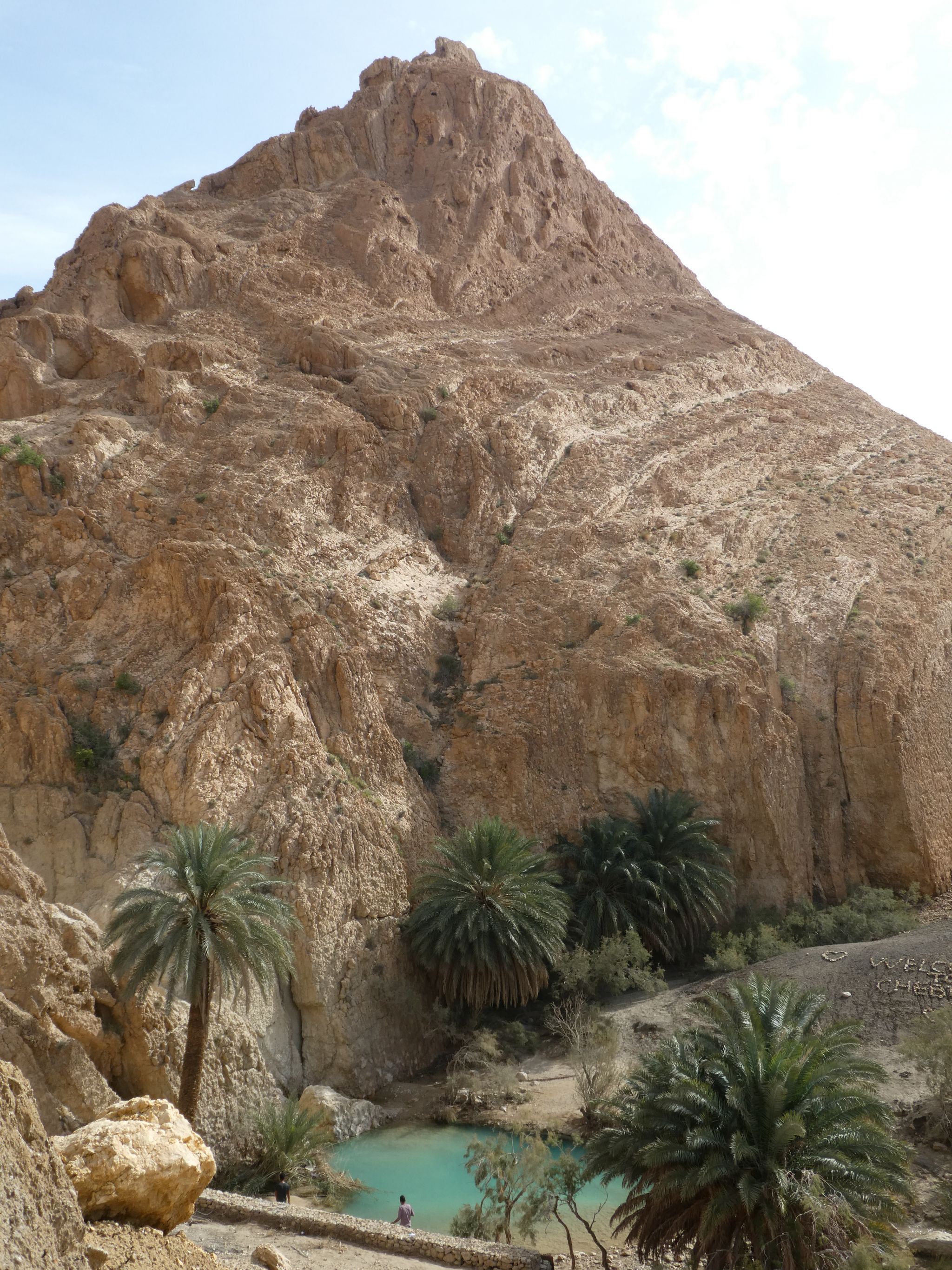 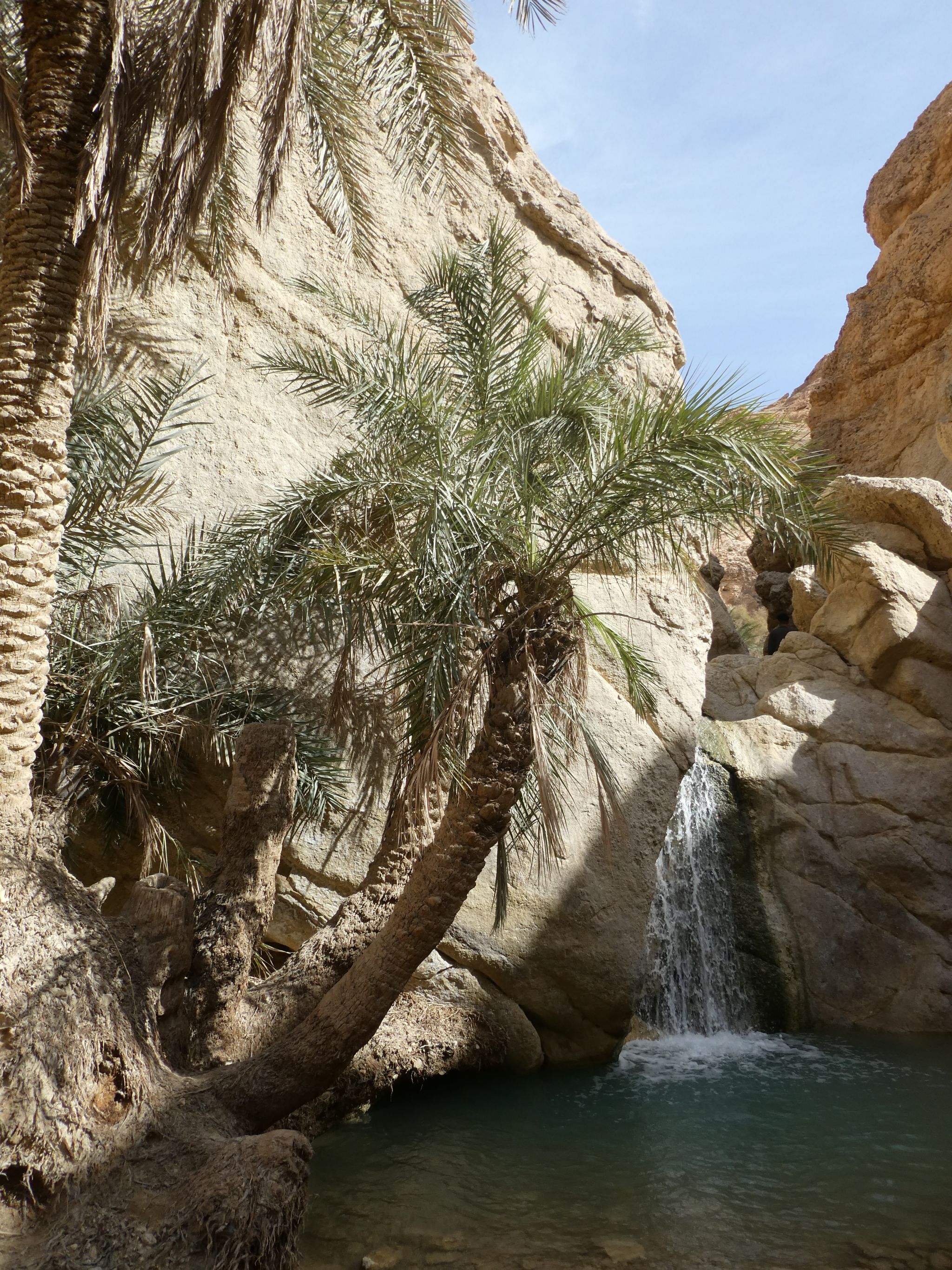 Climbing to the high points above the oasis gives a fantastic panorama view of the nearby Atlas Mountains.

There’s a whole lot of nothing out there.

Tamerza, about 70km from Tozeur, is the largest mountain oasis in Tunisia.  Water from the nearby hills flows down through a canyon feeding an oasis in which the town was built.  In 1969 the entire town was destroyed by catastrophic flooding due to a remarkable 22 days rain. The town has relocated to higher ground, and the abandoned buildings are a stark reminder of the power of the water which smashes through the canyon after rain further up. 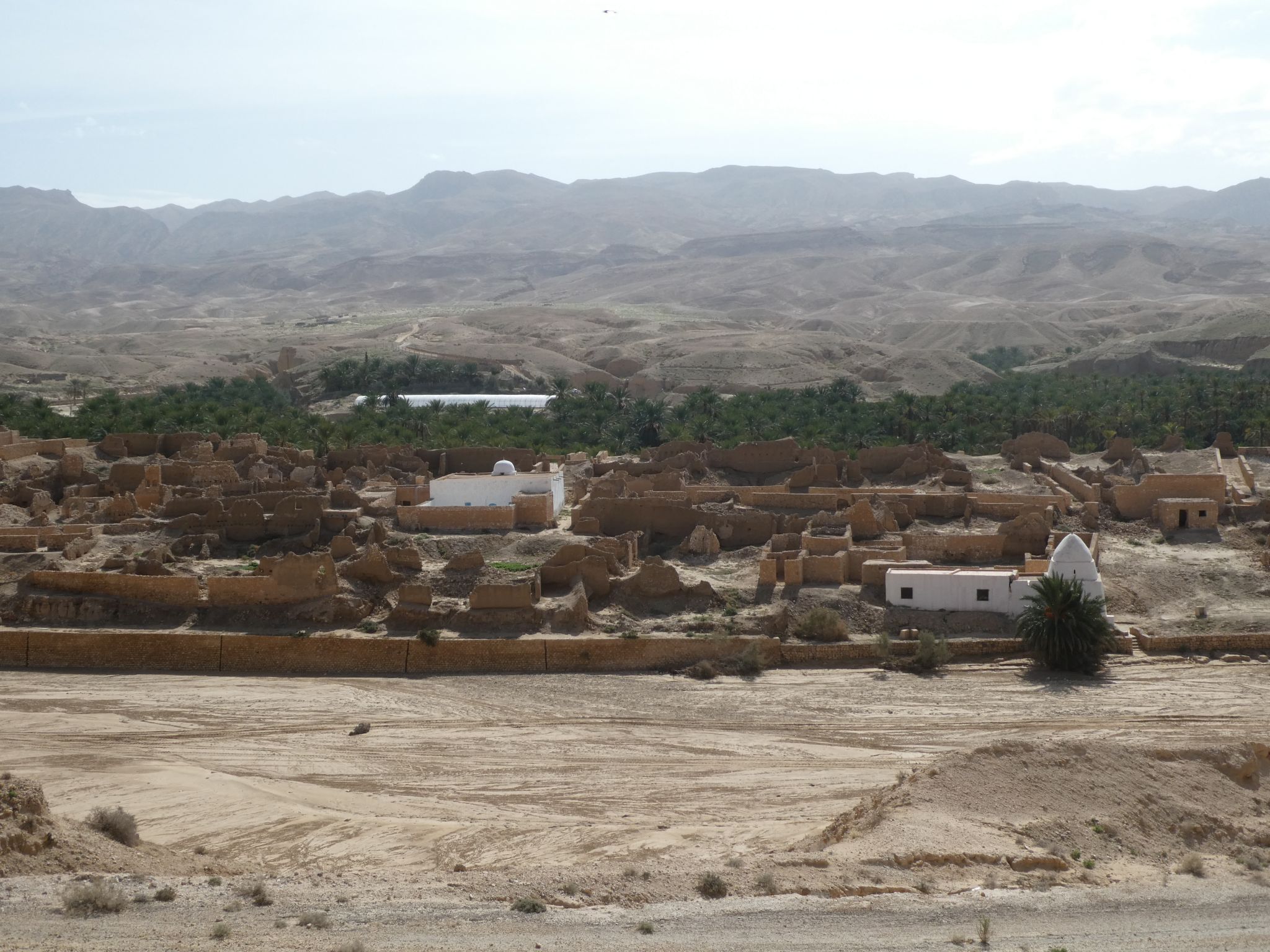 The stunning Midès Gorge is just 1km from the Algerian border.  Until recently it was out of bounds for tourists, and Tunisian army soldiers would turn back any vehicles headed this way.  Thankfully that’s no longer the case, and although official travel advisories still say not to travel within 30km of the Algerian border, we had no difficulties in this region.

The views down into the gorge from above are stunning. 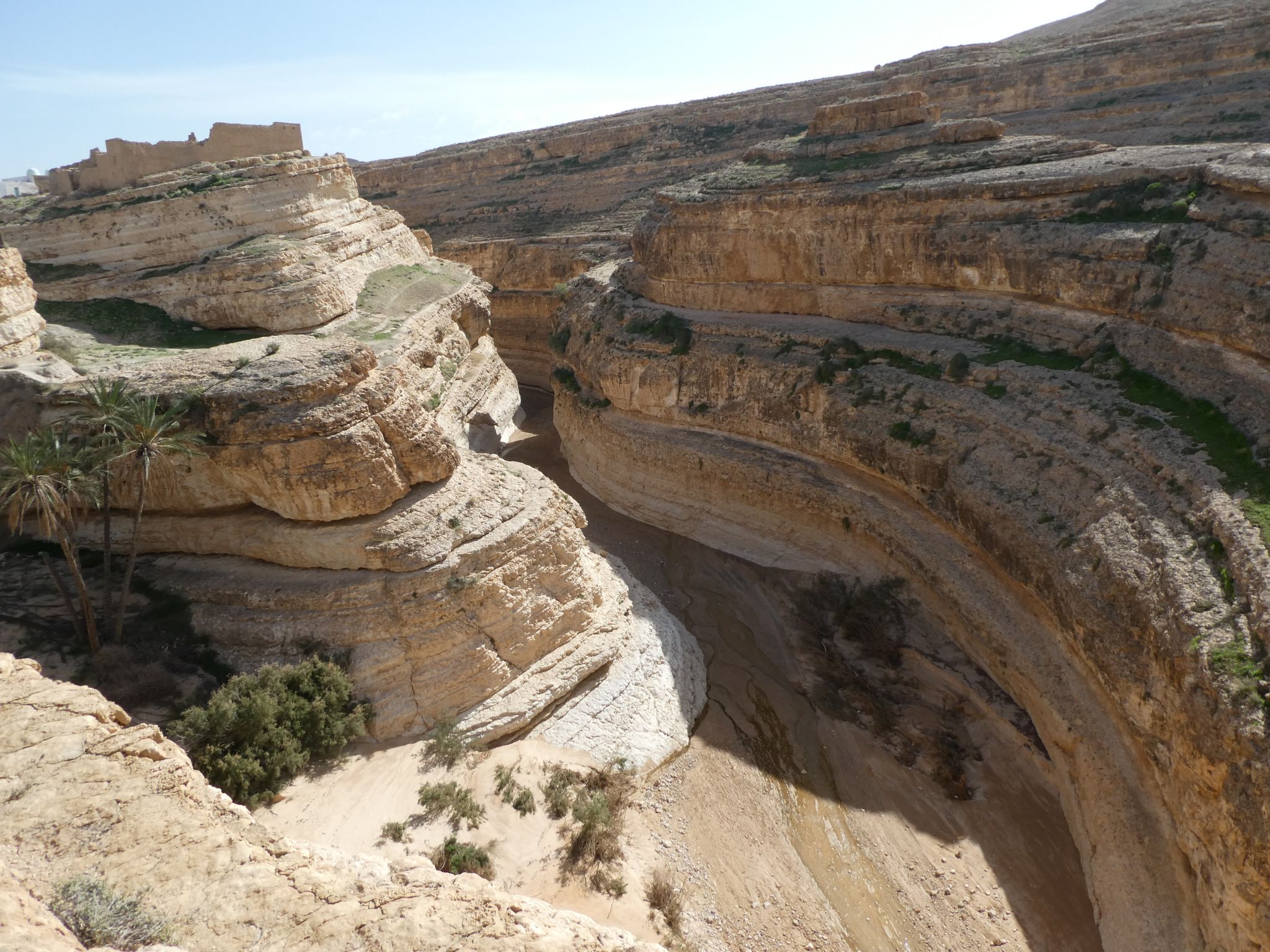 Perhaps unsurprisingly, the gorge sees few tourists.  We saw only one other person there.  We climbed down into the gorge and followed it along in one direction as it narrowed to a sliver, then in the other direction almost to where it widened out into a plain.

Down in the gorge it is quiet, cool and peaceful.  The air is clear and damp, in contrast to the desert air above.  Beautiful. 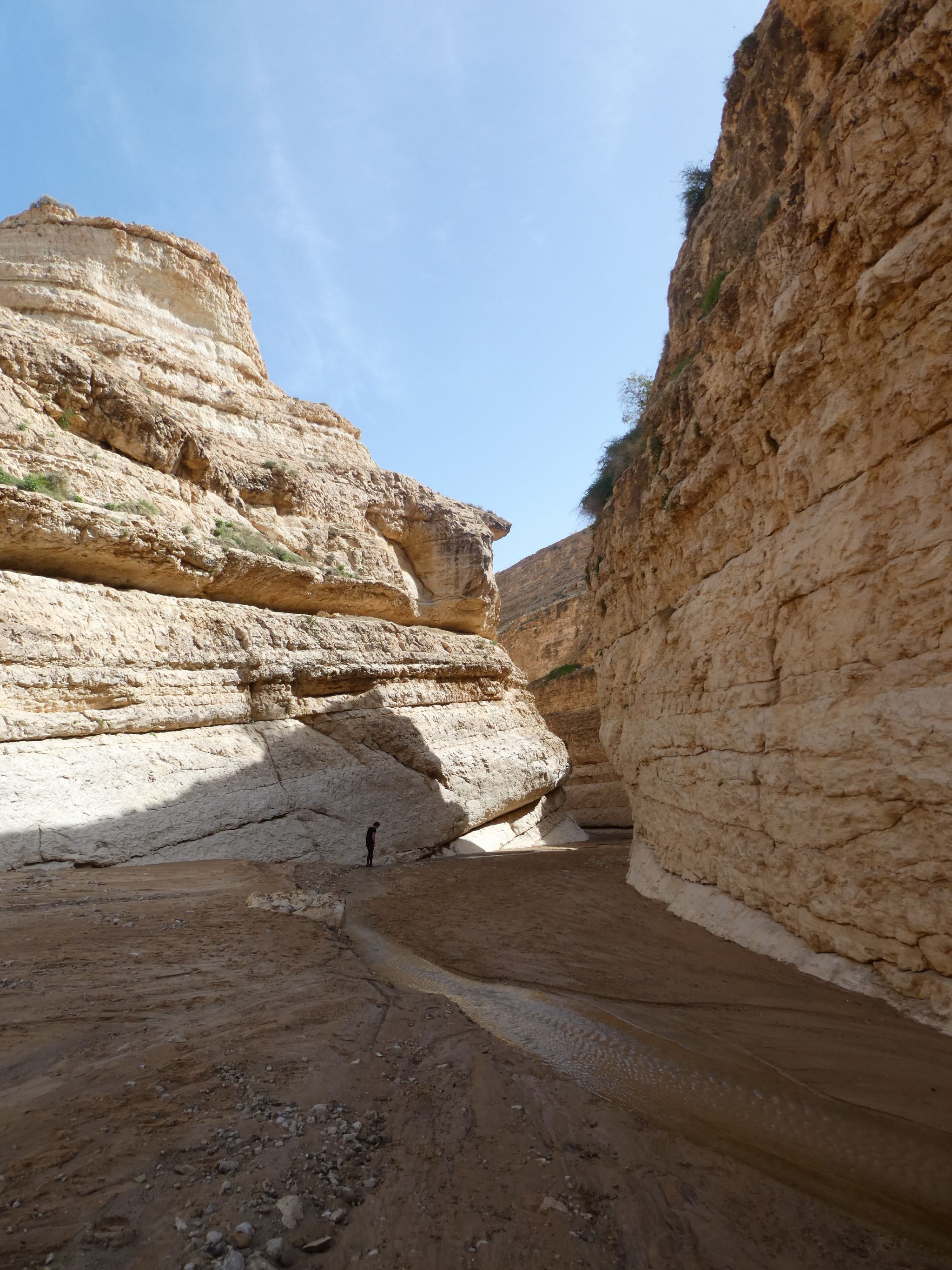 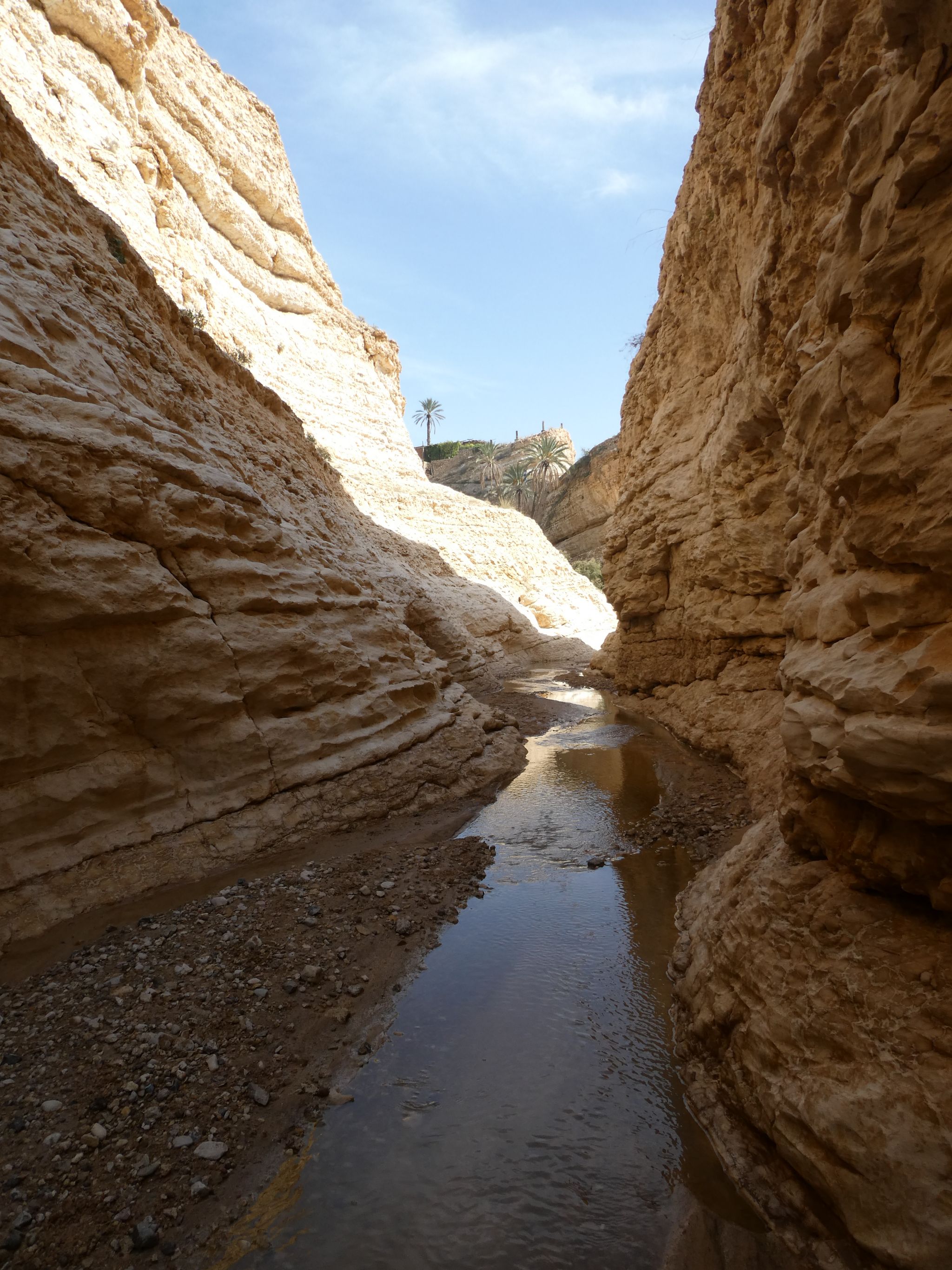 Somewhere out in the desert, about 45km from Tozeur, in the middle of an otherwise bare desert landscape, is a curious rock formation known as Ong Jemel, ‘The Camel’s Neck’.  You can climb to the top for great views of, well, desert as far as the eye can see in all directions. 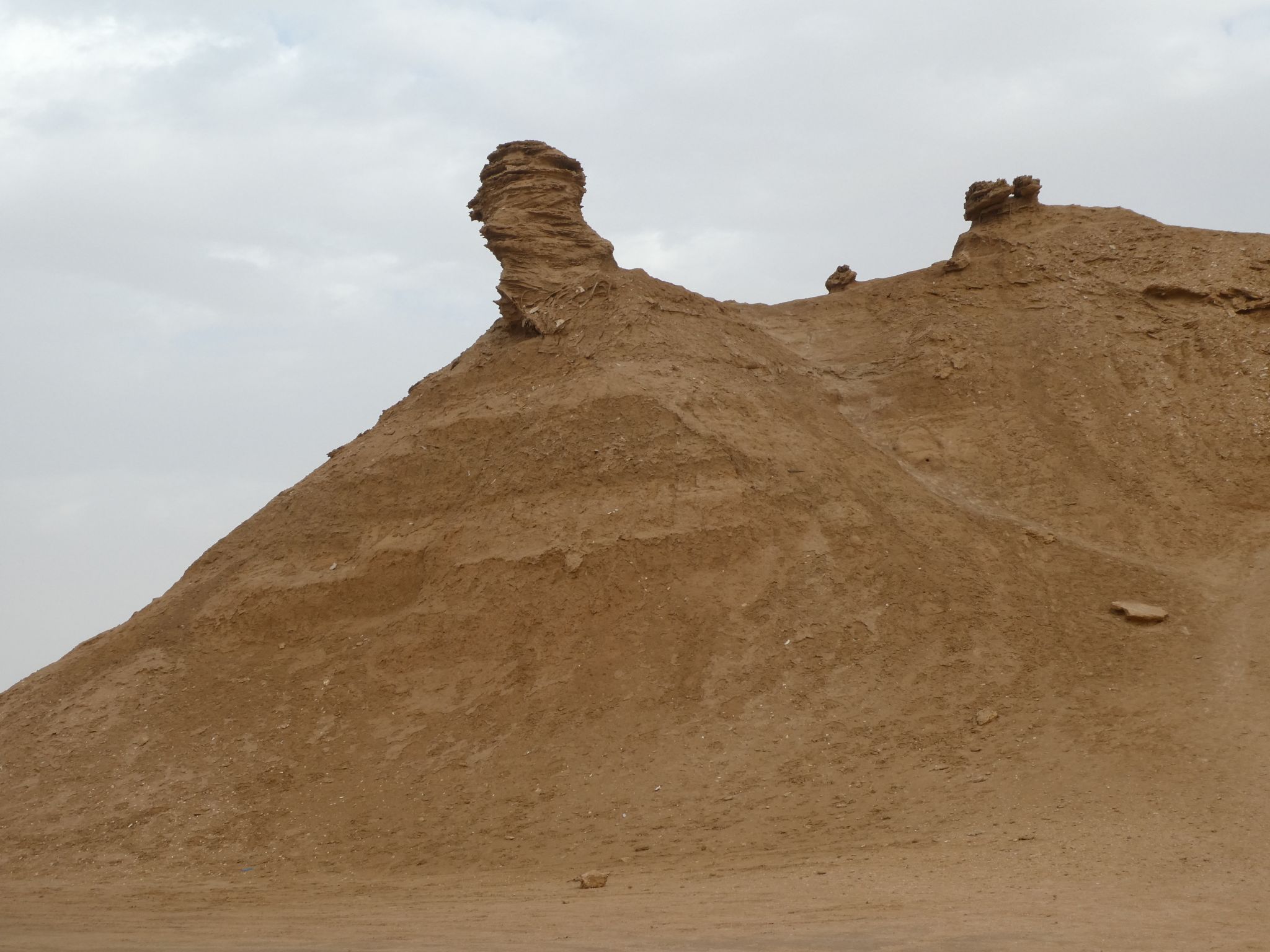 Ong Jemel features in Star Wars Episode 1 – The Phantom Menace, as the landing site where Darth Maul arrived on Tatooine and released the Sith Probes to search for Queen Amidala’s ship.

4WDs bring visitors here and then to the abandoned film set of Mos Espa, the town in which a young Anakin Skywalker did his first pod racing, constructed in open desert 6km away.

The set sits quietly disintegrating in the sand.

For Star Wars fans like us who think if it doesn’t have Harrison Ford in it, it isn’t a ‘real’ Star Wars film, these sites were a bit of a mystery.  But hey, we’d come all this way, so why not.  And the locals are very, very proud of them! 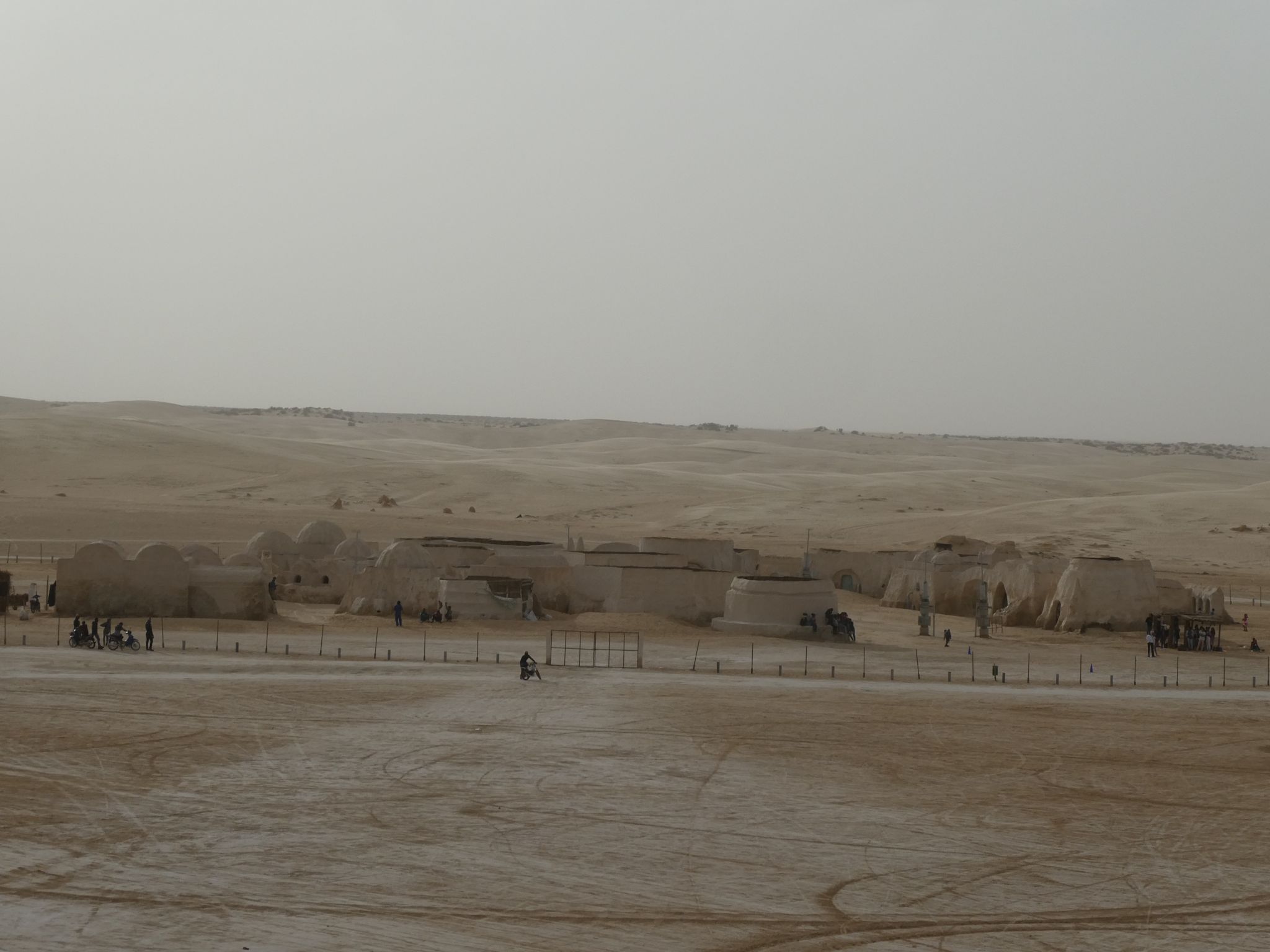 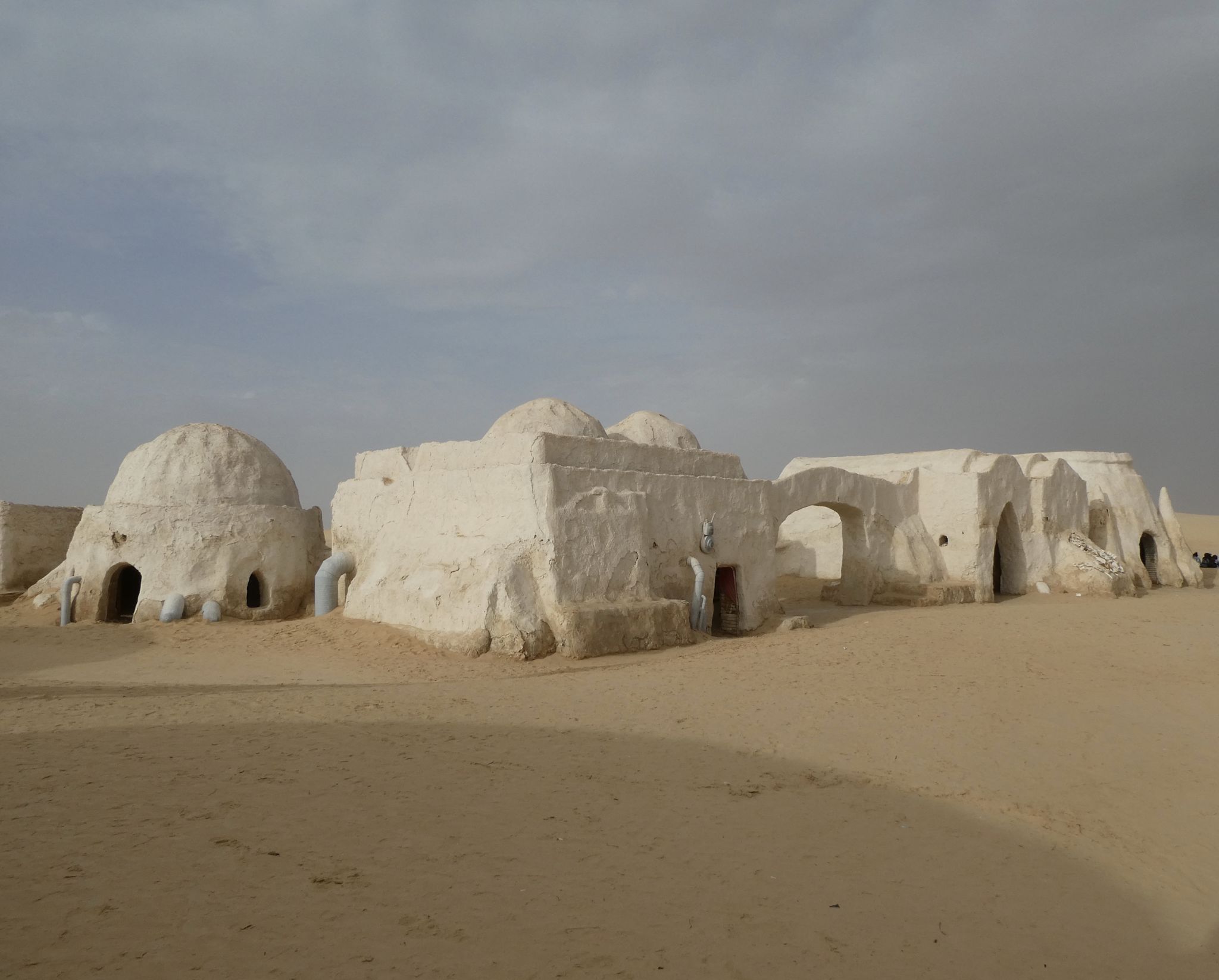 This finished our jaunts around the far west, and we headed back east by car, across the Chott el Djerid, the Sahara’s largest salt pan, with an area of 7,000 square kms.  In the winter, rain turns the ground to liquid and parts of it are navigable by boat.  In summer, it bakes to a crust of salt.  We were there between seasons and the ground was more like solid clay with a film of salt.

Eventually we reached the totally unremarkable town of Douz, where we turned south again, out of the salt and into the sand.  As we continued a relentless trajectory south, the weather was deteriorating.  The sky was murky and the sun was indistinct behind a gathering cloud of sand.

South of Douz we passed no towns, no villages, nothing except a few drilling rigs and some road construction equipment.  At a shack where we turned off toward Ksar Ghilane, a man leapt out and flagged us down, hence we came to pick up a crazy Italian hitchhiker who was couch-surfing his way around Tunisia.

Another few hours later, we arrived in Ksar Ghilane, the most southern oasis in Tunisia.  Beyond it, there is nothing but the sands of the Western Sahara.  Disappointingly, this does not mean it’s a quiet, palm tree-ed centre of serenity.  It’s become something of a mecca for quad bikes, off road motorcycles and 4WD dune bashing, so not the place for quiet contemplation of the desert.

Our digs were a pleasant tent camp, thankfully away from the throng. 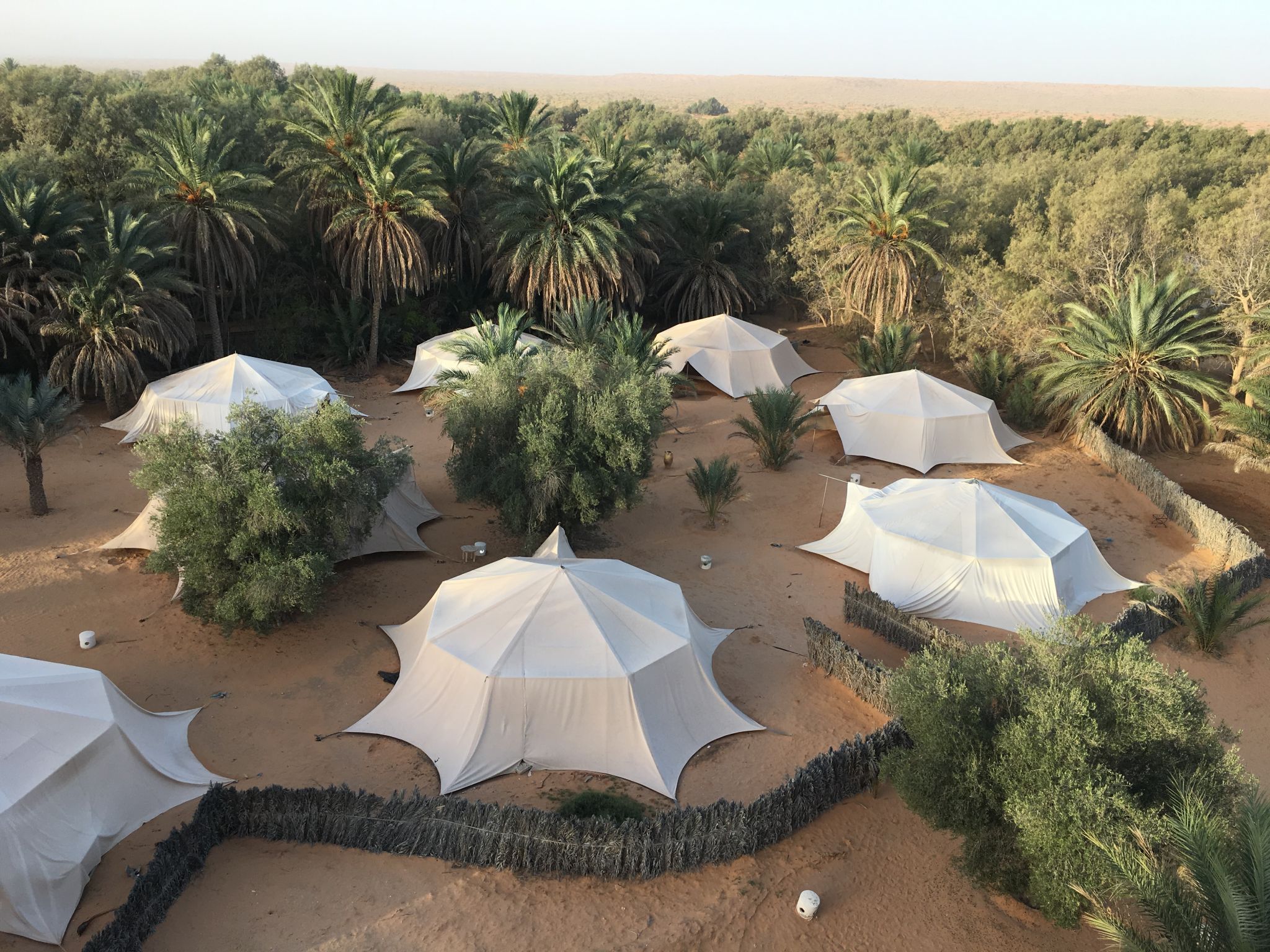 We went camel riding at dusk, but an initial slight breeze turned quickly into a sandstorm.  Very unpleasant.  Sand in places you really don’t want it.  In particular, eyes, mouth and Julie’s camera, with terminal effect in the case of the camera.

After Ksar Ghilane, we headed back north, passing through Matmata, where a local hotel doubled as the interior of the Lars Homestead for the Star Wars movies.  They actually didn’t have to do much other than a bit of paint and a few props.  It is still a hotel, with a Star Wars themed menu (whatever that means) and you can stay there if you really want to indulge your Jedi Knight fantasy. 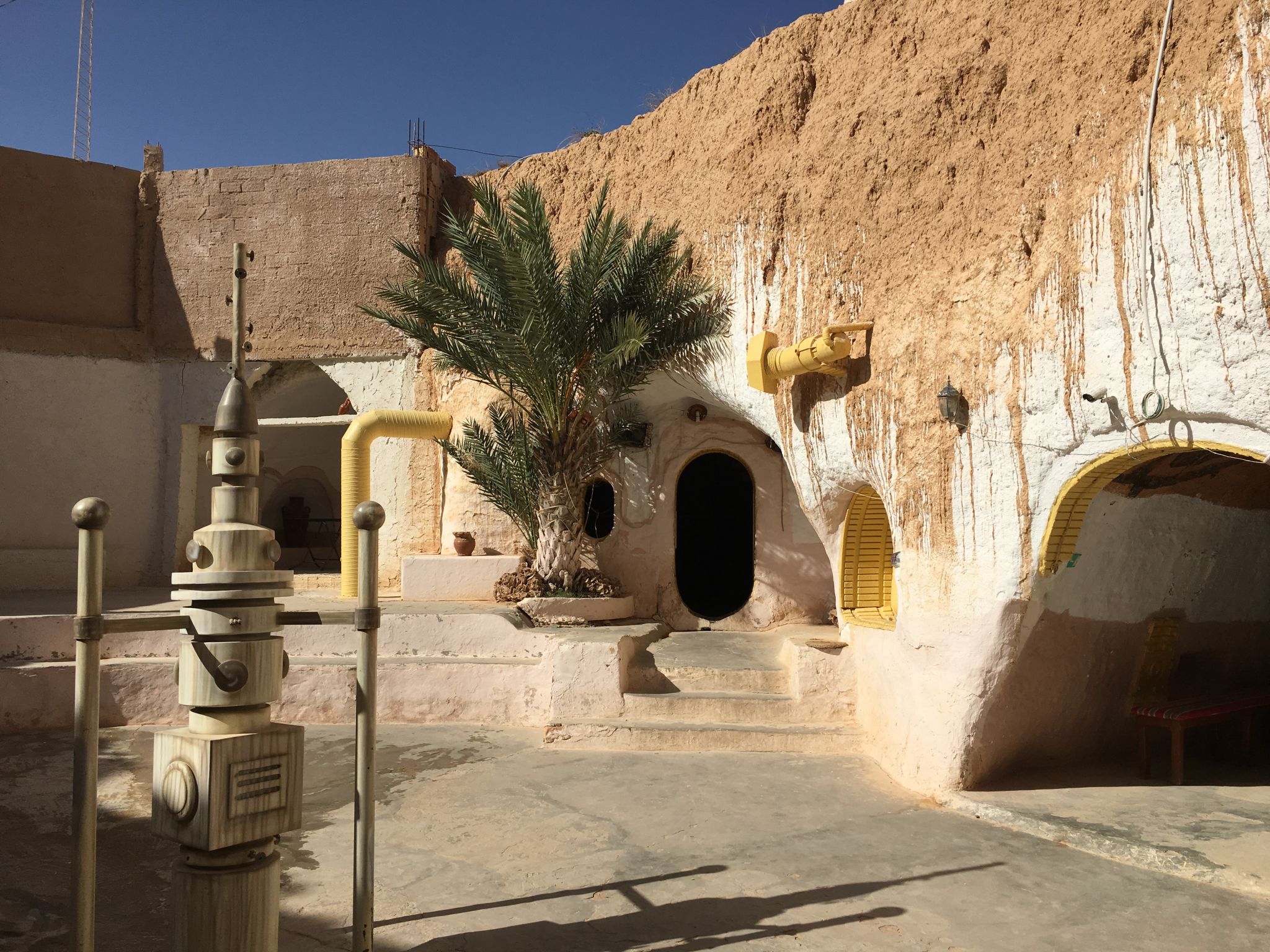 More authentic and far more interesting is the community of troglodytes.  That might sound derogatory, but it’s not.  The word means people who live in caves.  The caves here have been homes for centuries and there are still many people living in the houses which honeycomb the hills around Matmata.  Some will invite you in to see how they live, and we were even offered tea, homemade bread and local honey.  This was a lovely experience and whilst the lady of the house accepted the small ‘tip’  we offered, there was no pressure to give anything. 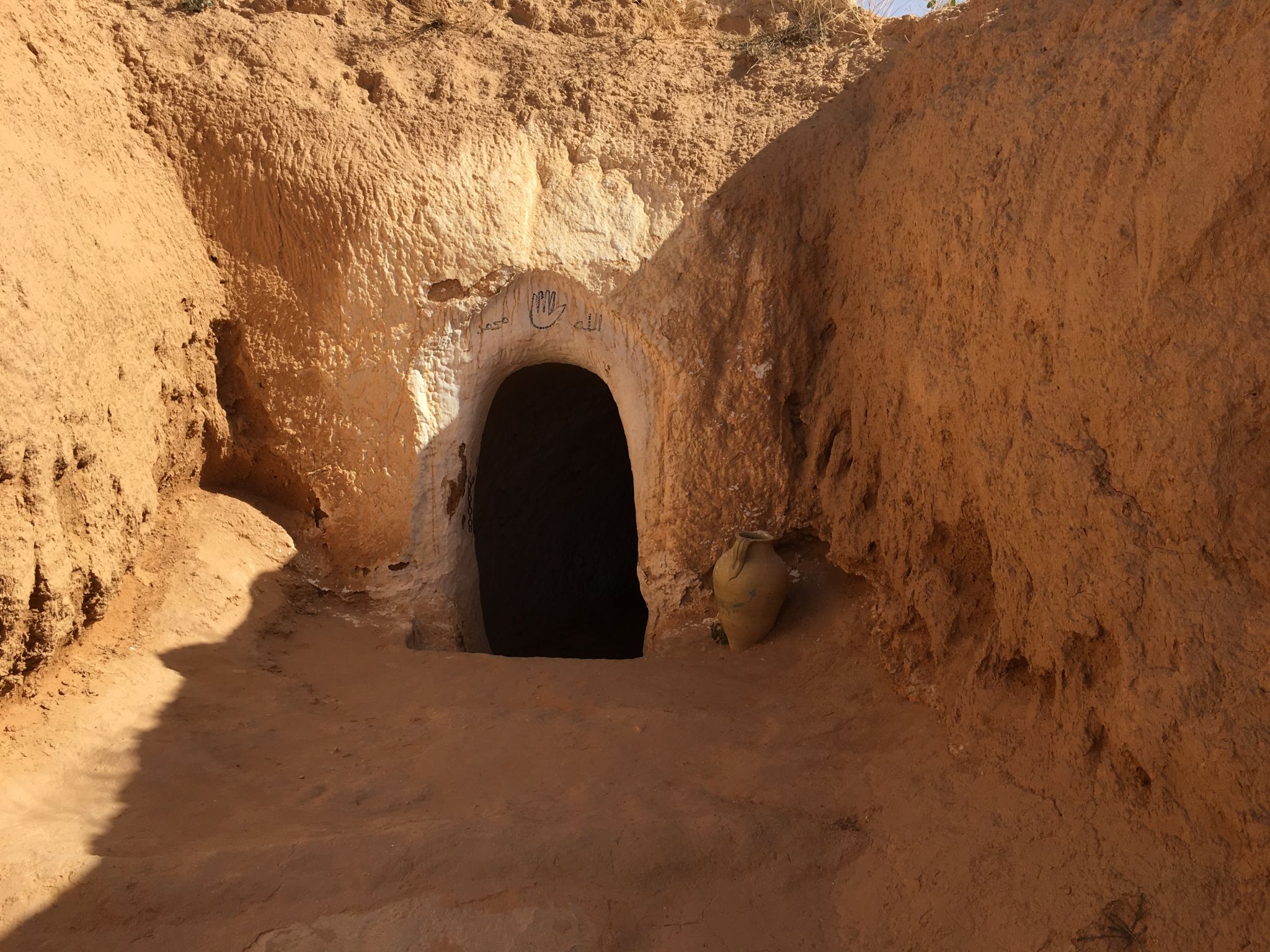 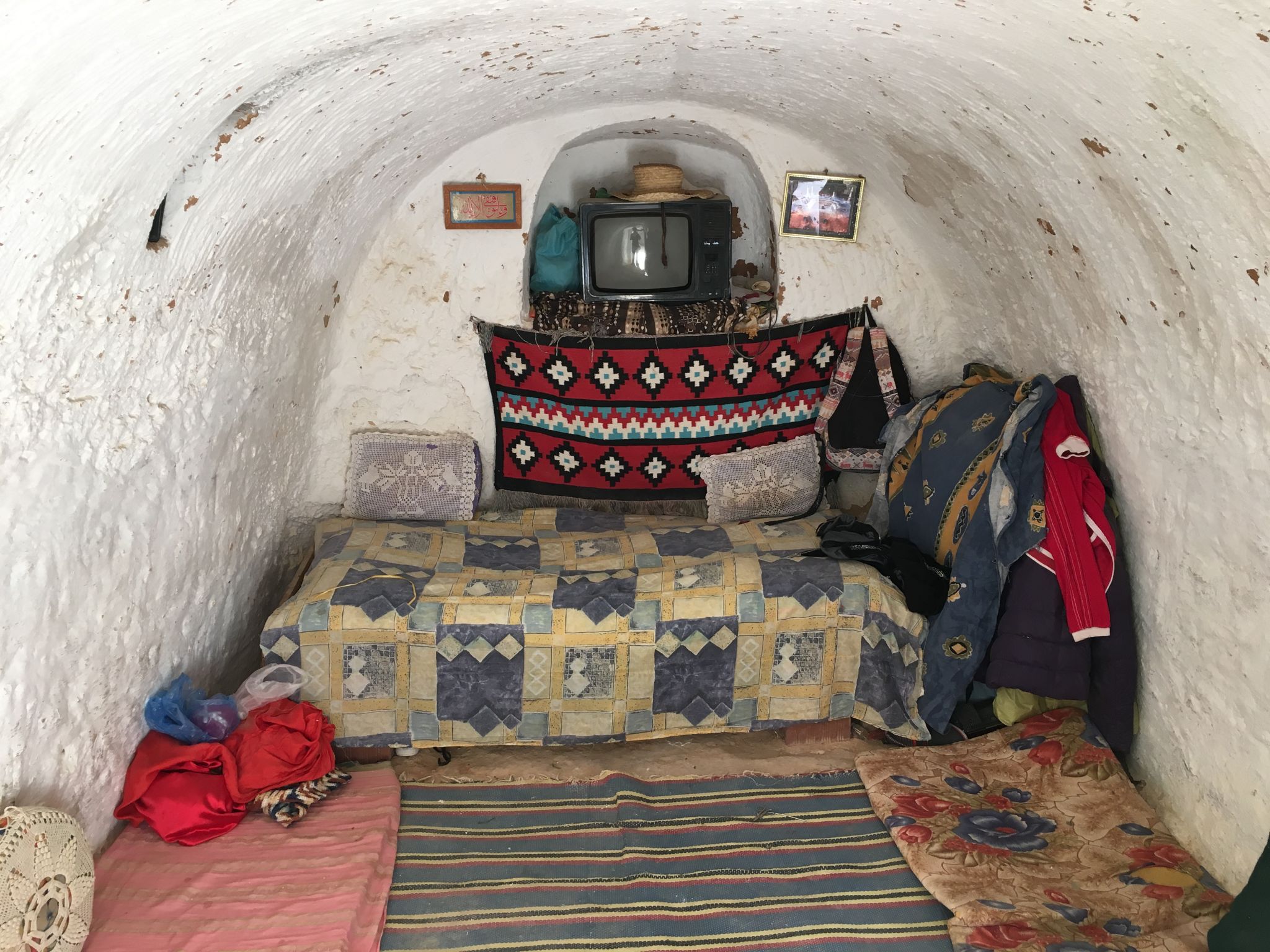 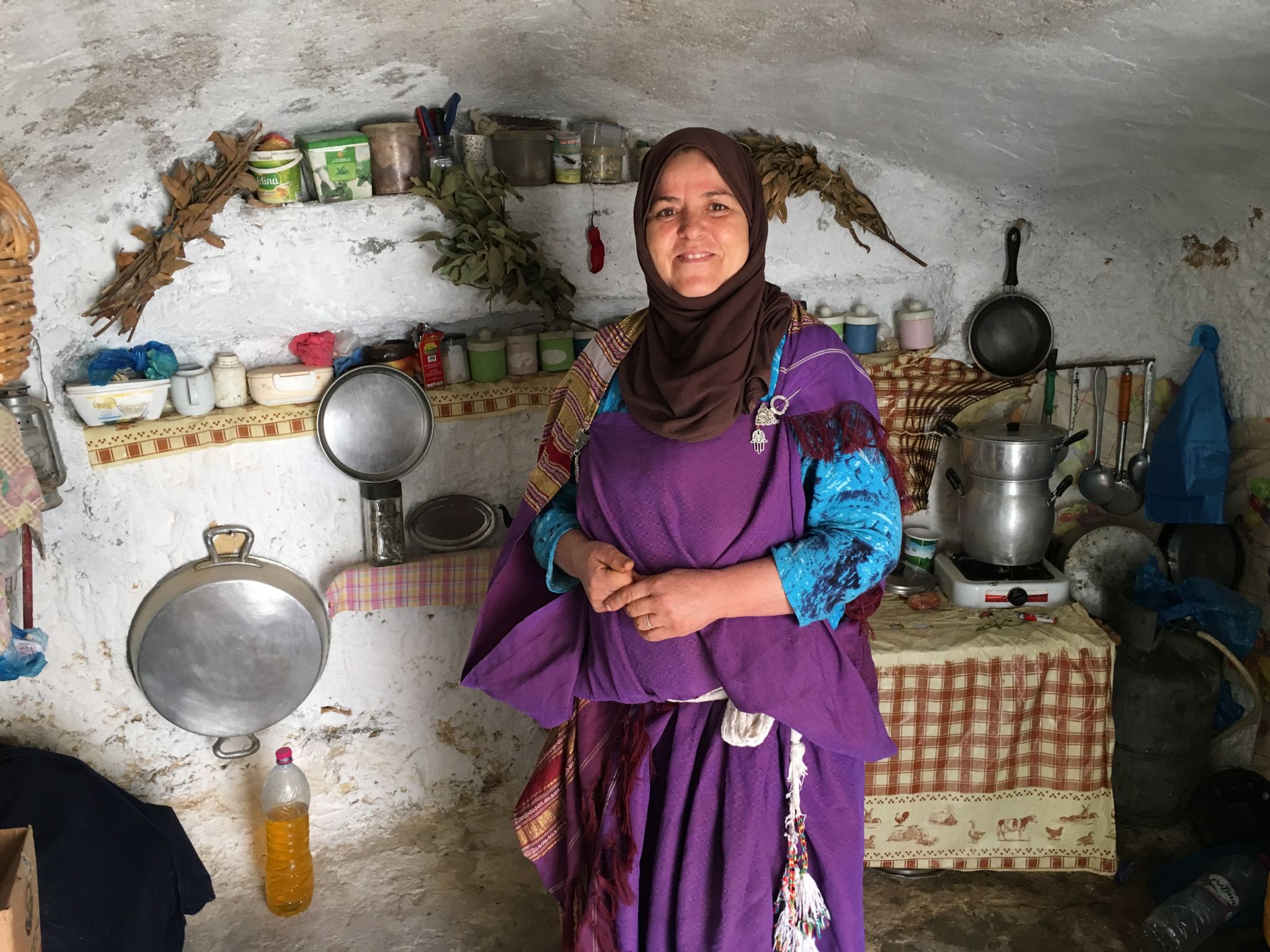 It was a typically friendly end to our travels around the south and fortified us for the long trip back north, where we had another night in Tunis before leaving Tunisia.  Our time in Tunisia was short, but we really enjoyed it.  Highly recommended!