Crazy, chaotic, vibrant.  We’ve been to plenty of big cities, plenty of crazy cities, but Cairo is, well, it’s Cairo and it’s unique.  With a population of 22 million people, Cairo is the largest city in Africa and the 16th largest metropolitan area in the world.

Crossing the street in Cairo is a religious experience.  Try crossing the traffic roundabout on Tahrir Square on foot.  Half way across, even if you don’t believe in God, you will find yourself praying for divine protection.

American journalist Tony Horowitz wrote “put an Egyptian in the driver’s seat and he shows all the calm of a hooded swordsman delivering Islamic justice”.  Actually, we thought they were very calm behind the wheel – calmly determined to charge at highest possible speed into any real or imagined space in the traffic tangle, and to overtake whenever physically possible, and sometimes when it is not.  There is no car in Cairo which does not have scrapes and dents on it.

Cairo is vast, with no immediately identifiable ‘centre’.  But from a visitor’s perspective, there are distinct, identifiable areas of interest, making it a little like a series of cities within the city.   The metro is convenient and easy to use, and as the traffic grinds along at a near standstill anywhere off the major arterial streets, the metro is a really useful way to get around.

We stayed in the area known as Downtown.  In the late 1800s, Egypt’s French-educated leader invited French, Belgian and Italian architects to design a whole new Cairo, a building frenzy intended to create a ‘Paris on the Nile’.  The result was many beautiful buildings of the day, but with Egypt falling on harder times, the old buildings’ elegance is crumbling and masked in dirt.  Block after block of true ‘renovator’s delights’. 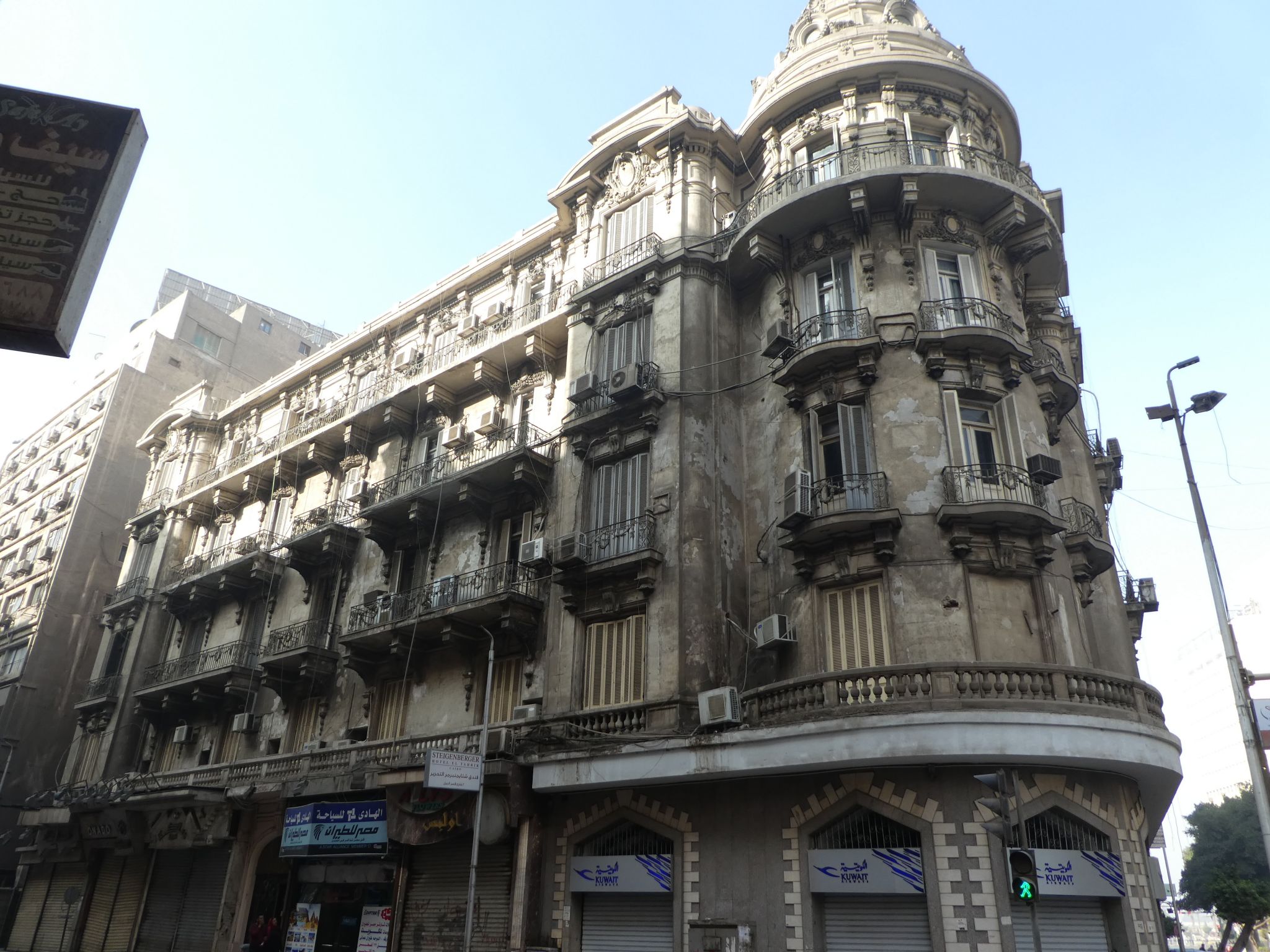 Downtown is also home to the Egyptian Museum.  Opened in 1902, it has, unsurprisingly, the world’s largest collection of Egyptian antiquities.  So large, in fact, that only a representative sample can be seen, and even then, the museum is far too small for the treasures displayed.  This is a shame, because it means many of the rooms are stuffed haphazardly with exhibits, poorly lit and with no explanation cards.

A new mega-museum is being built at Giza near the pyramids, but the project is massively over-budget and behind schedule.  We were told “It will be finished in six months.  Six months Egyptian time”.

In the meantime, visiting the old museum feels like rummaging through a warehouse with no order or logic to the placement of things.

But there are some specific exhibits that are done very well.  The treasures from Tutankhamen’s tomb, which are probably the museum’s most popular collection, are well displayed.  This one looked like an ancient Egyptian hot tub. 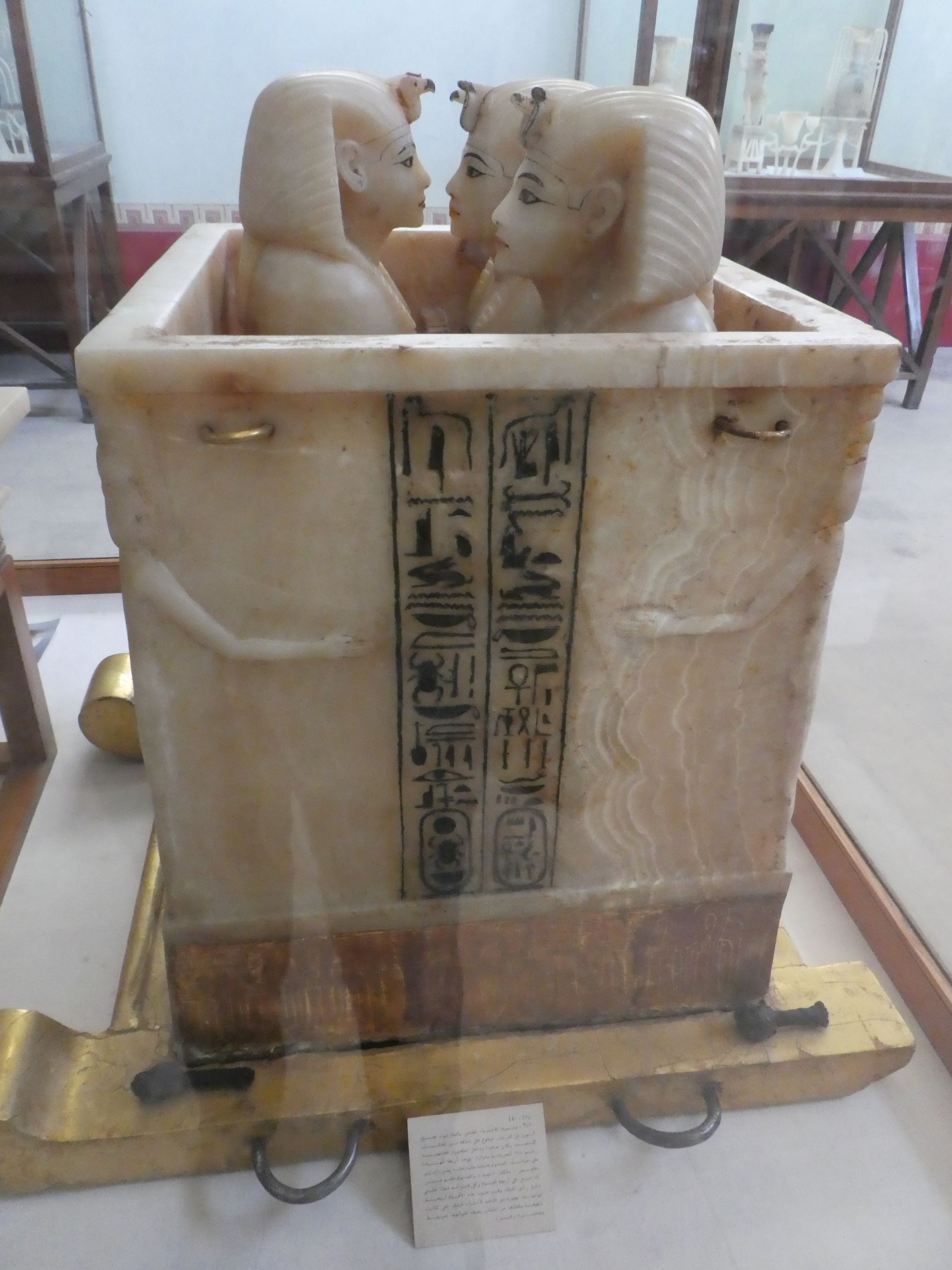 There are some fantastic sarcophagi and lots of big stone statues, such as a 7 metre high limestone statue of Amenhotep III and his wife. 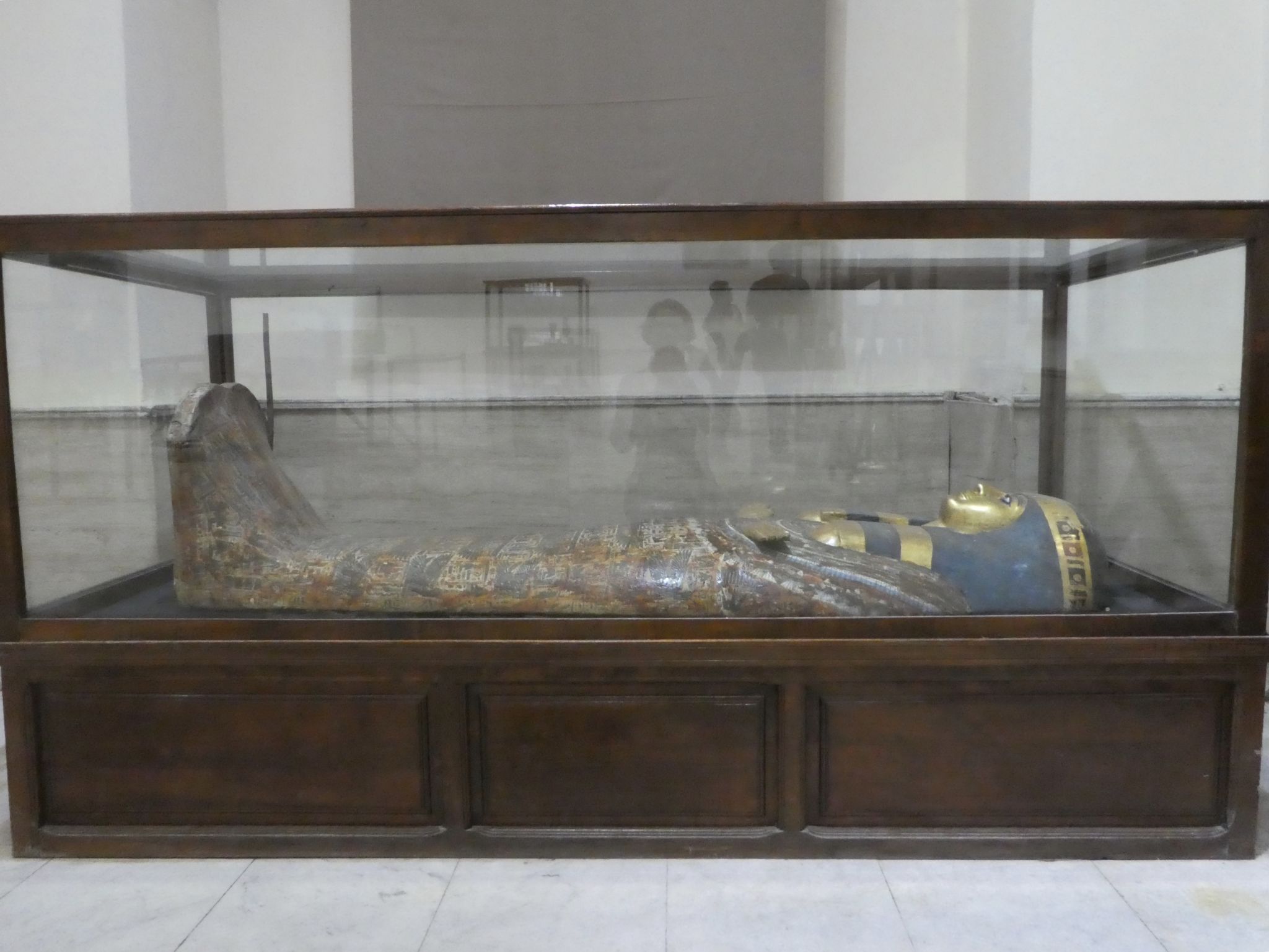 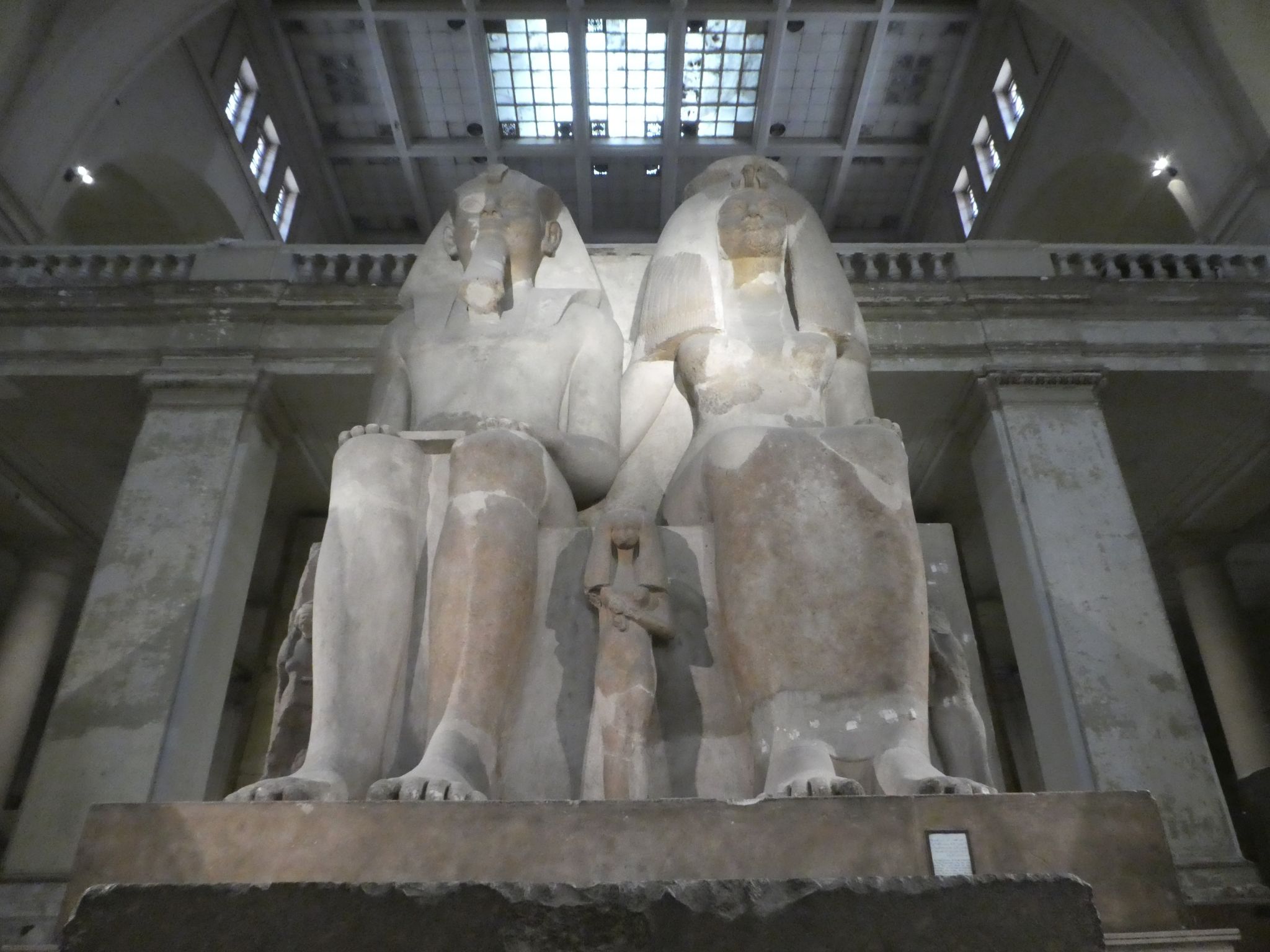 And there is a marvellous, almost creepy, but entrancing two-room exhibit of mummies.  It is the biggest single collection of mummies in the world.  The mummies are carefully presented in individual glass cases in a room cooled to 22 degrees, where visitors file past and whisper in hushed tones, creating a morgue-like atmosphere.  They belong to the 17th to  21st dynasties, 1650 to 945BCE.  It is incredible to look into the face of someone who died more than 3,000 years ago. 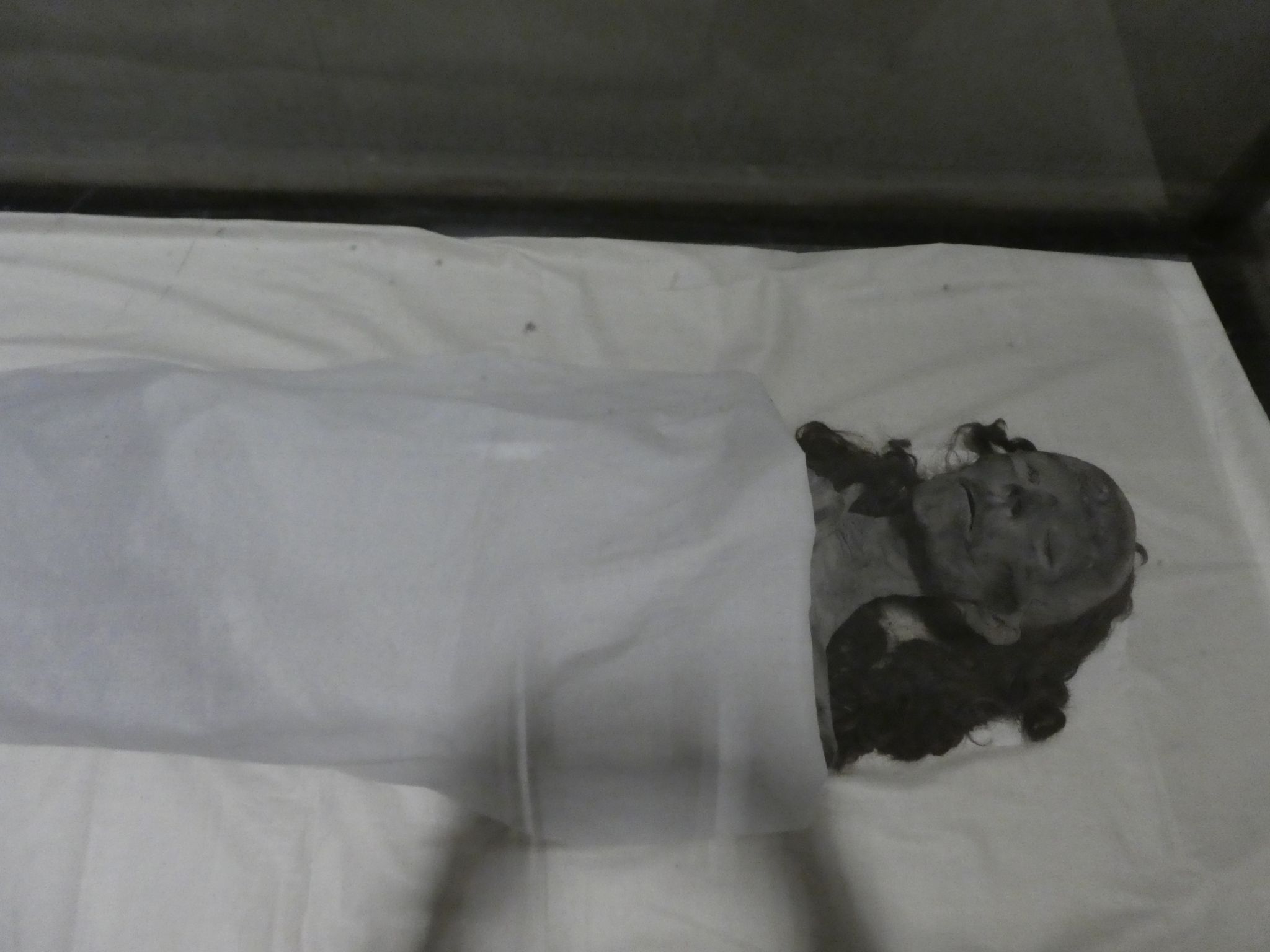 And Julie found the room of mummified animals fascinating.  We had not known that the ancient Egyptians mummified cats, dogs, jackals, baboons and even crocodiles.  Animals were mummified for four reasons: pets buried with their owners, victual mummies to provide sustenance to the deceased in the afterlife, votive offerings, and animals which were themselves considered sacred. 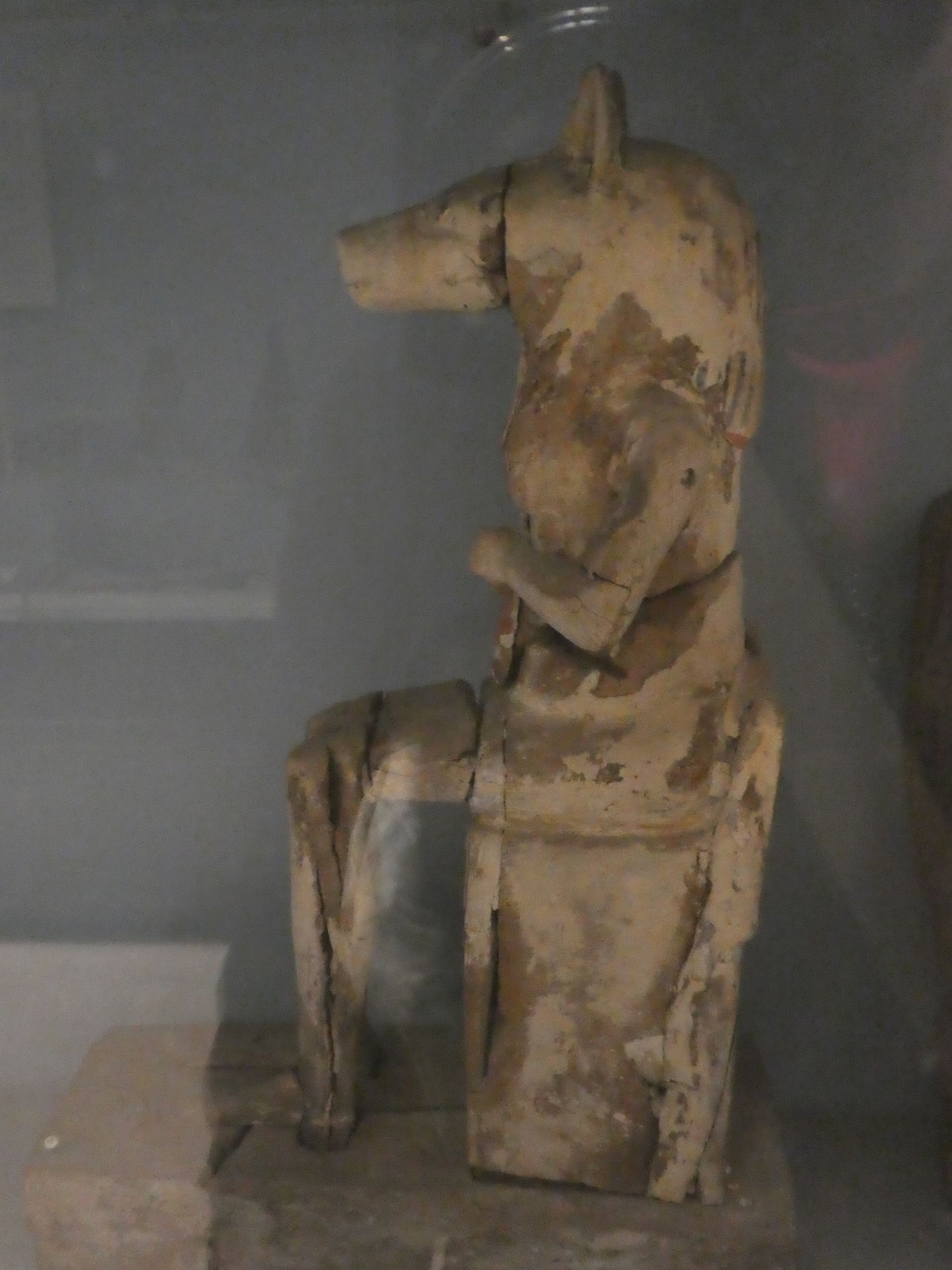 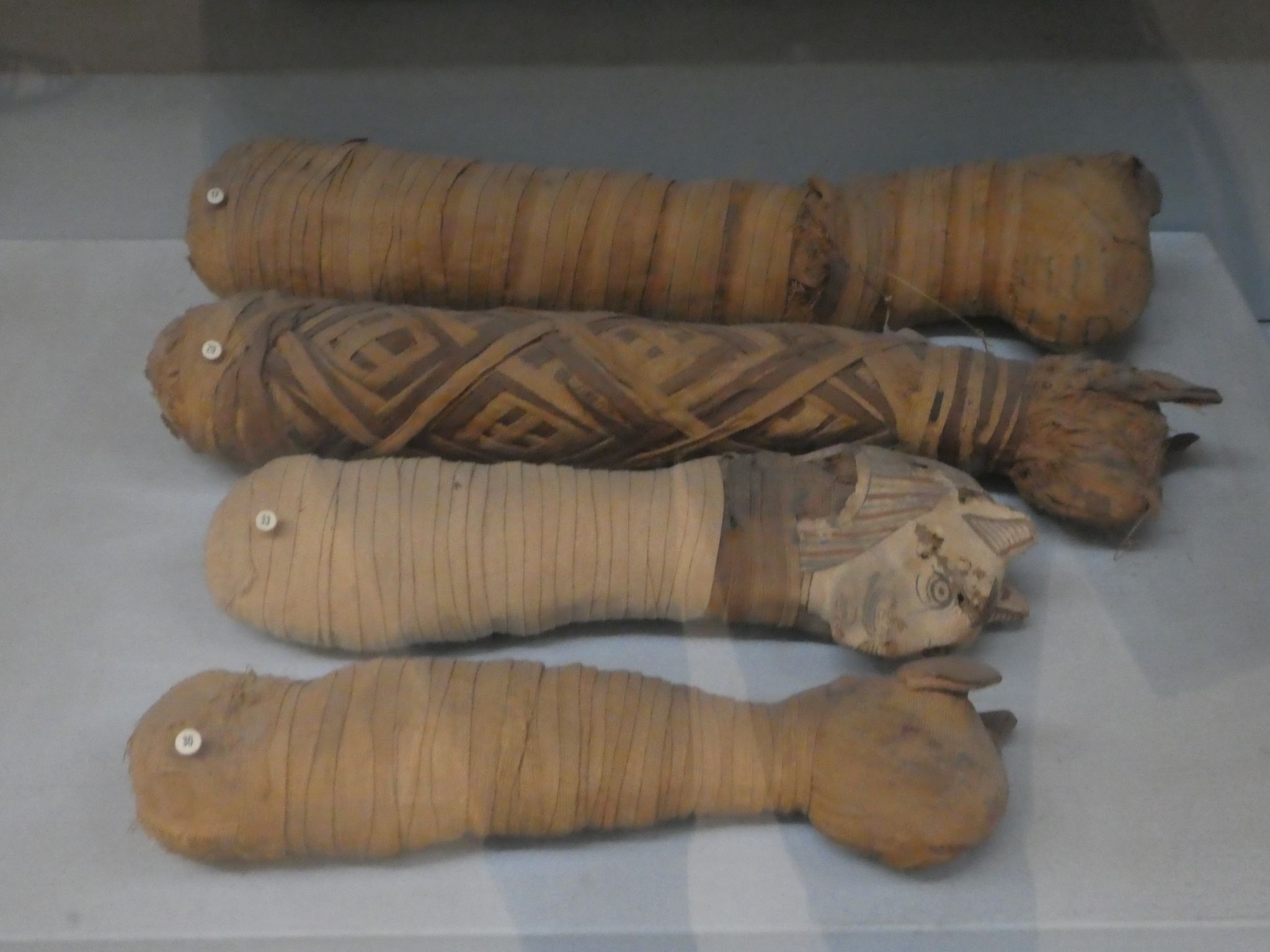 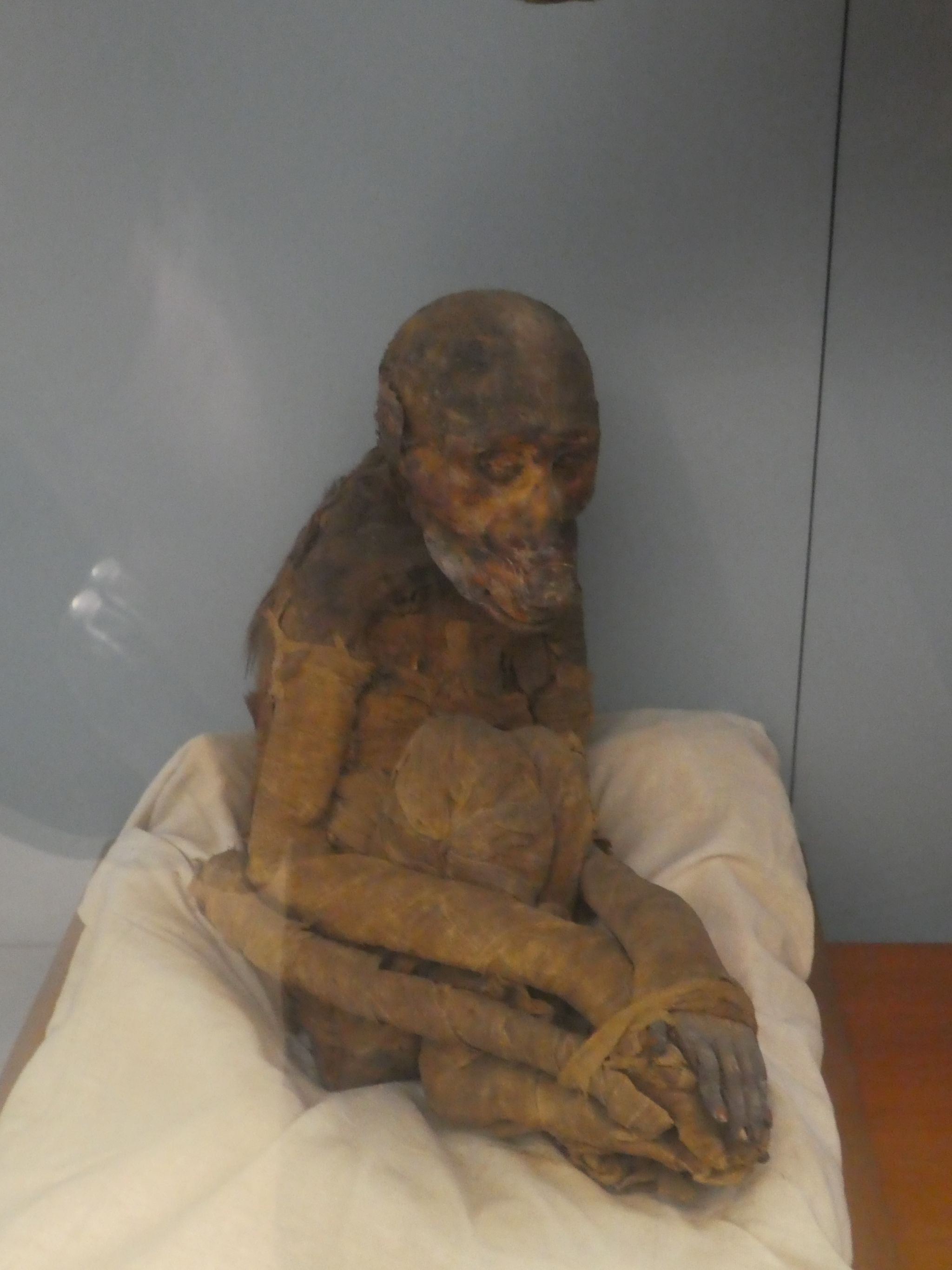 But Cairo isn’t all about Egyptian antiquities.  Far from it.

Tradition holds that Christianity came to Egypt in about 50CE when St Mark the Evangelist founded the Church of Alexandria in the north.  It gained quite a foothold, but followers were persecuted until Christianity became the official religion of the Roman Empire in 380CE.

The Egyptian church later separated from the church of the Romans and Byzantines, becoming the Coptic Orthodox Church.

The area known as Coptic Cairo is actually encompassed within an old Roman fort known as the Babylon Fortress.  It is totally unlike anywhere else in Cairo.  It’s completely traffic-free for one thing!

Within the walled area, is a labyrinth of lanes with a church at every turn.  It’s a calm and restful place to walk around. 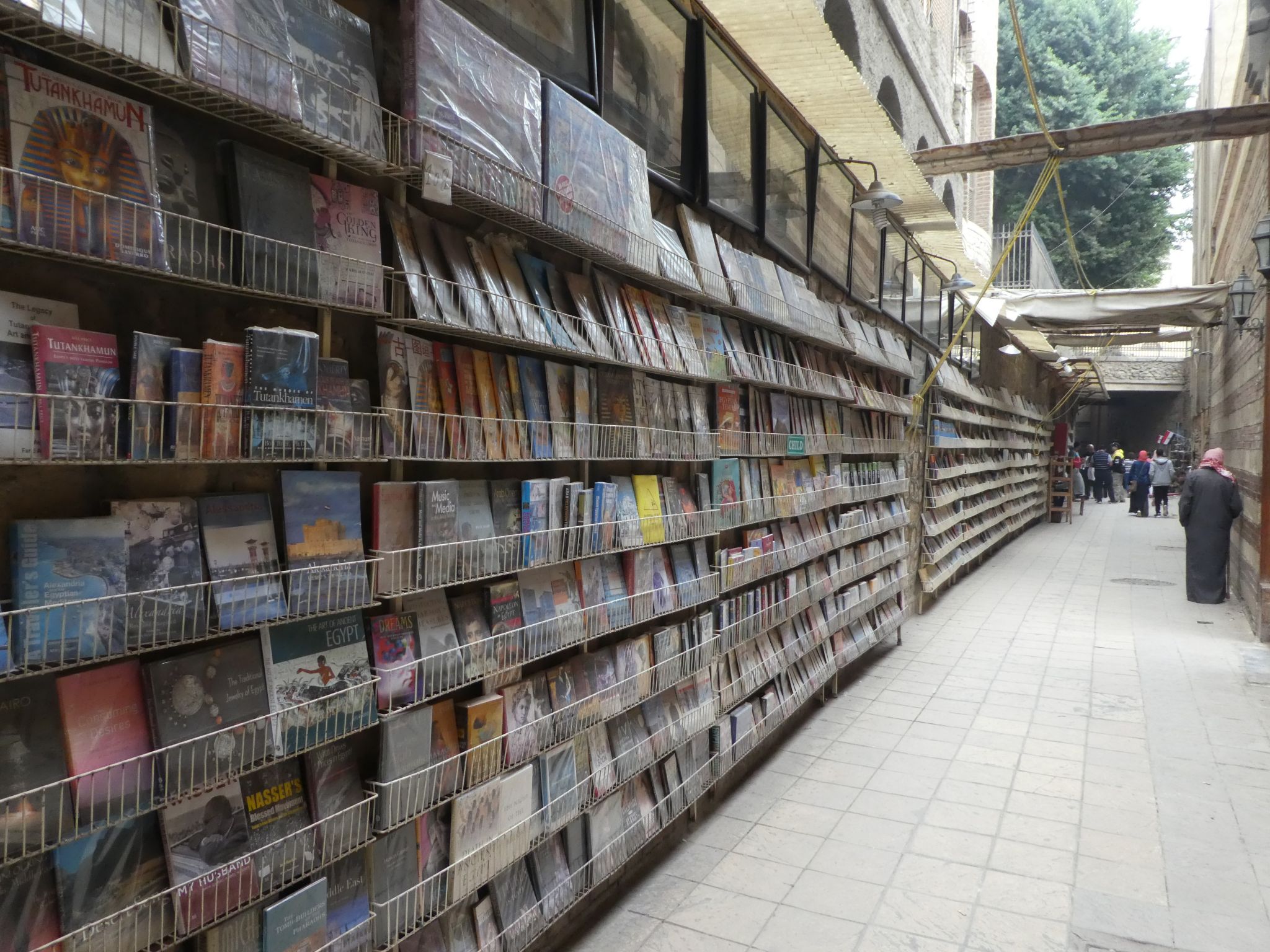 The Church and Monastery of St George honour one of the Coptic Church’s favourite saints.  This St George was not the one that slew the dragon, but rather a Palestinian conscript in the Roman army who was executed in 303CE for resisting the Roman decree against the practice of Christianity.   Despite this, the mural on the front is of the other St George killing the dragon.  Confusing. 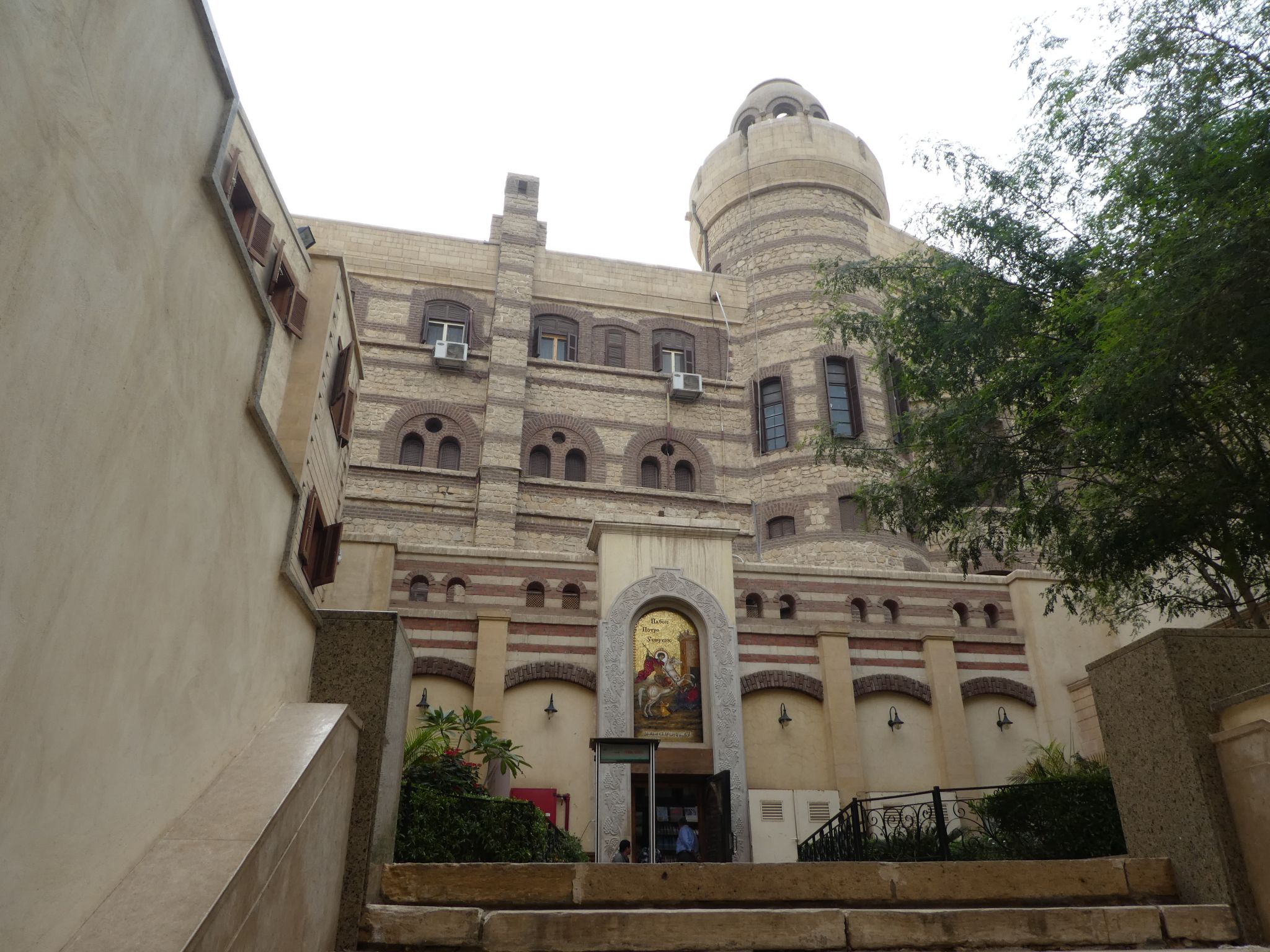 The 11th century Church of St Sergius and St Bacchus is the oldest church in Coptic Cairo, honouring two Roman soldiers who were martyred for their Christian faith.  It is built over a cave where it is believed Mary, Joseph and Jesus sheltered on their flight from Herod’s massacre of the first born sons of the Jews in Palestine. 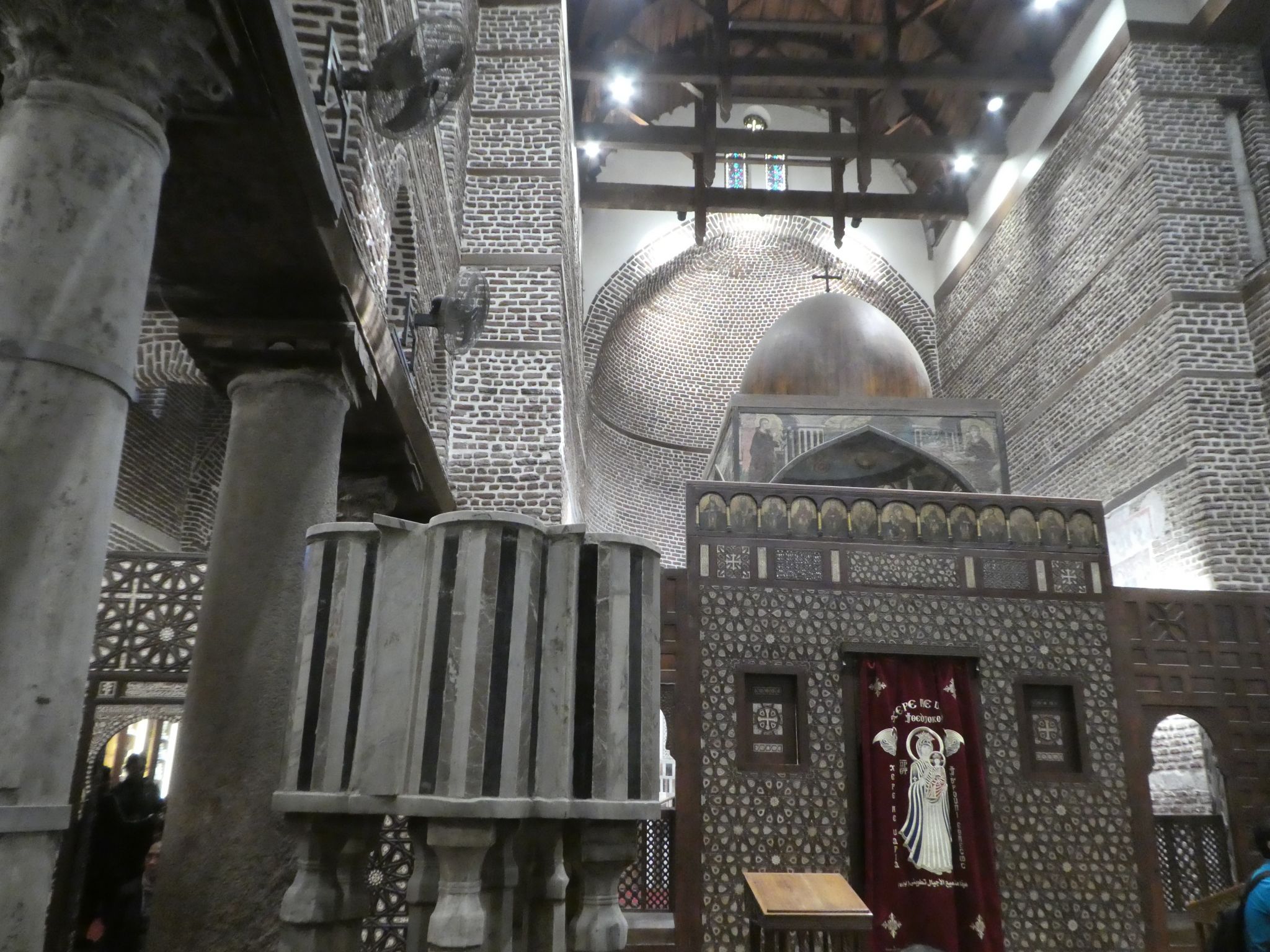 There is also the Hanging Church, so called because it is suspended over a water gate of the old fortress, and a panel has been cut in the floor so visitors can see the water gate below. 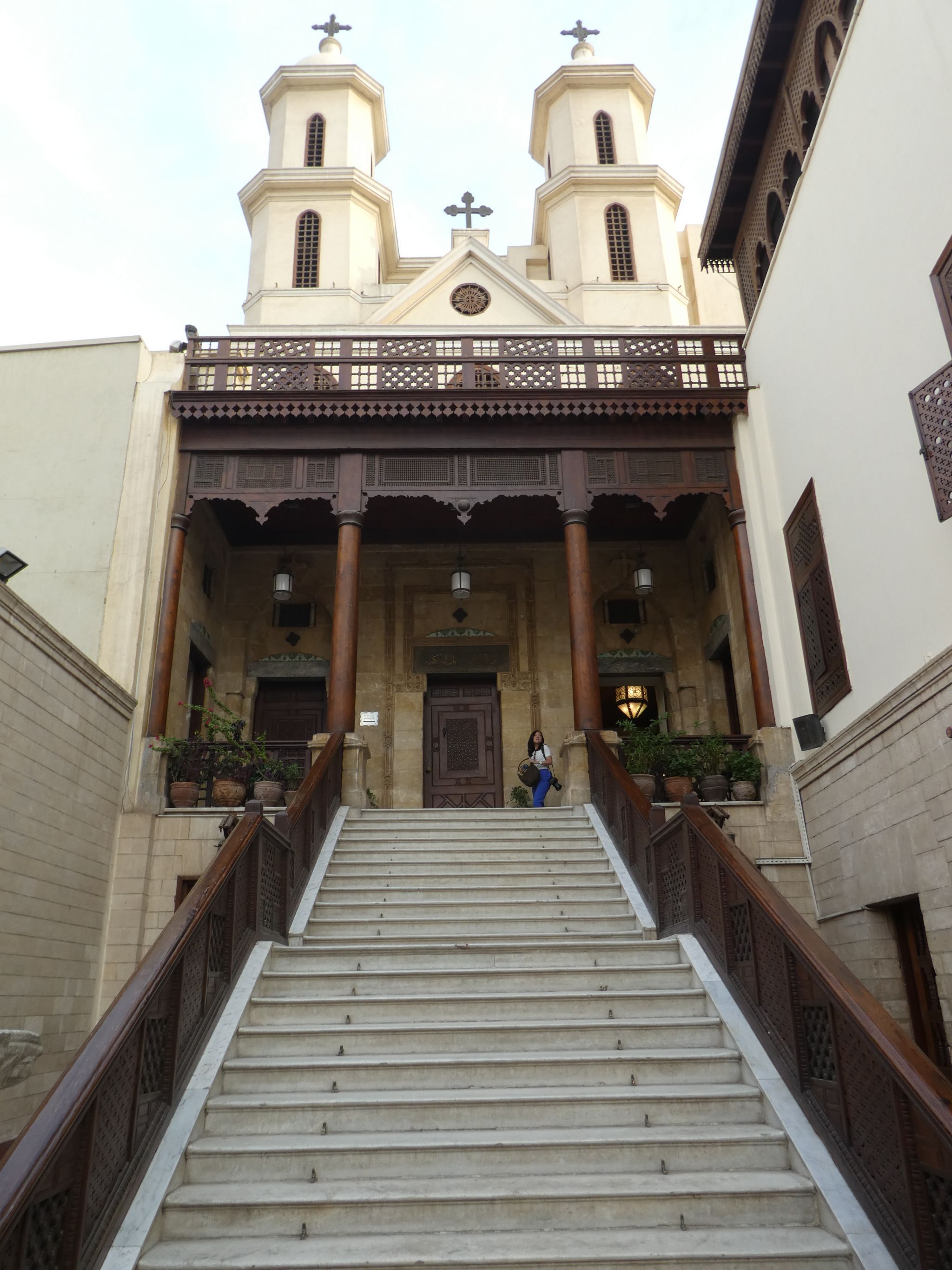 Just outside the walls is the Ben Ezra Synagogue.  It is said to mark the spot where Jeremiah gathered the Jews after Nebuchadnezzar destroyed the temple in Jerusalem.  As if that’s not fame enough, it is also reputed to be the site where the Pharaoh’s daughter found Moses in his basket of reeds in the Nile River, and for good measure, where Mary drew water to wash the baby Jesus during their flight into Egypt. 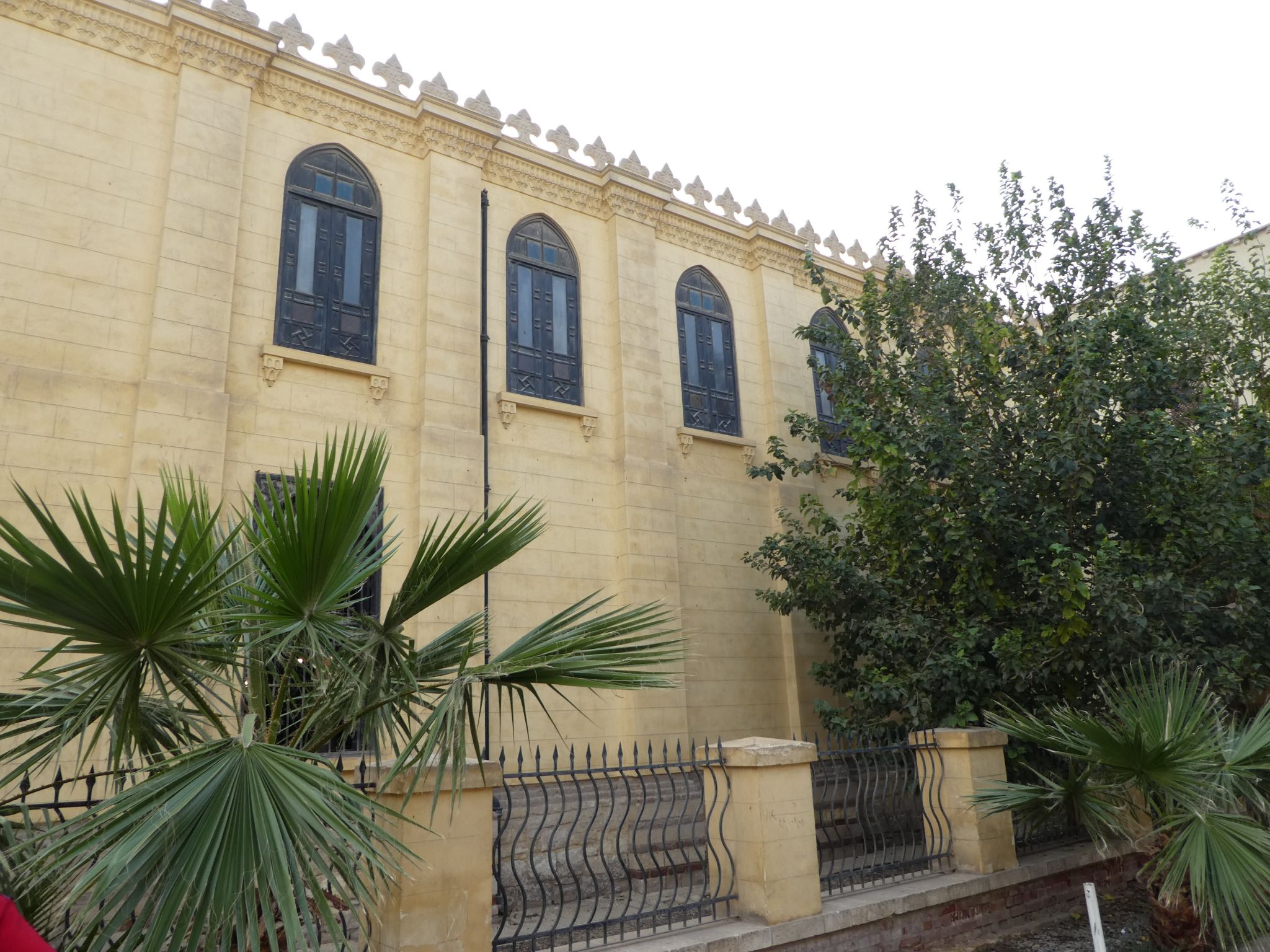 This section of the city isn’t necessarily more “Islamic’ than the rest of Cairo, but because it was once a significant centre of Islamic power in the region, it has a concentration of really impressive Islamic monuments.

Whilst large areas of Cairo continue to crumble into decrepitude, significant resources have been devoted to restoration of the monuments in this area.   The work is meticulous, some of the best we’ve seen on our travels. 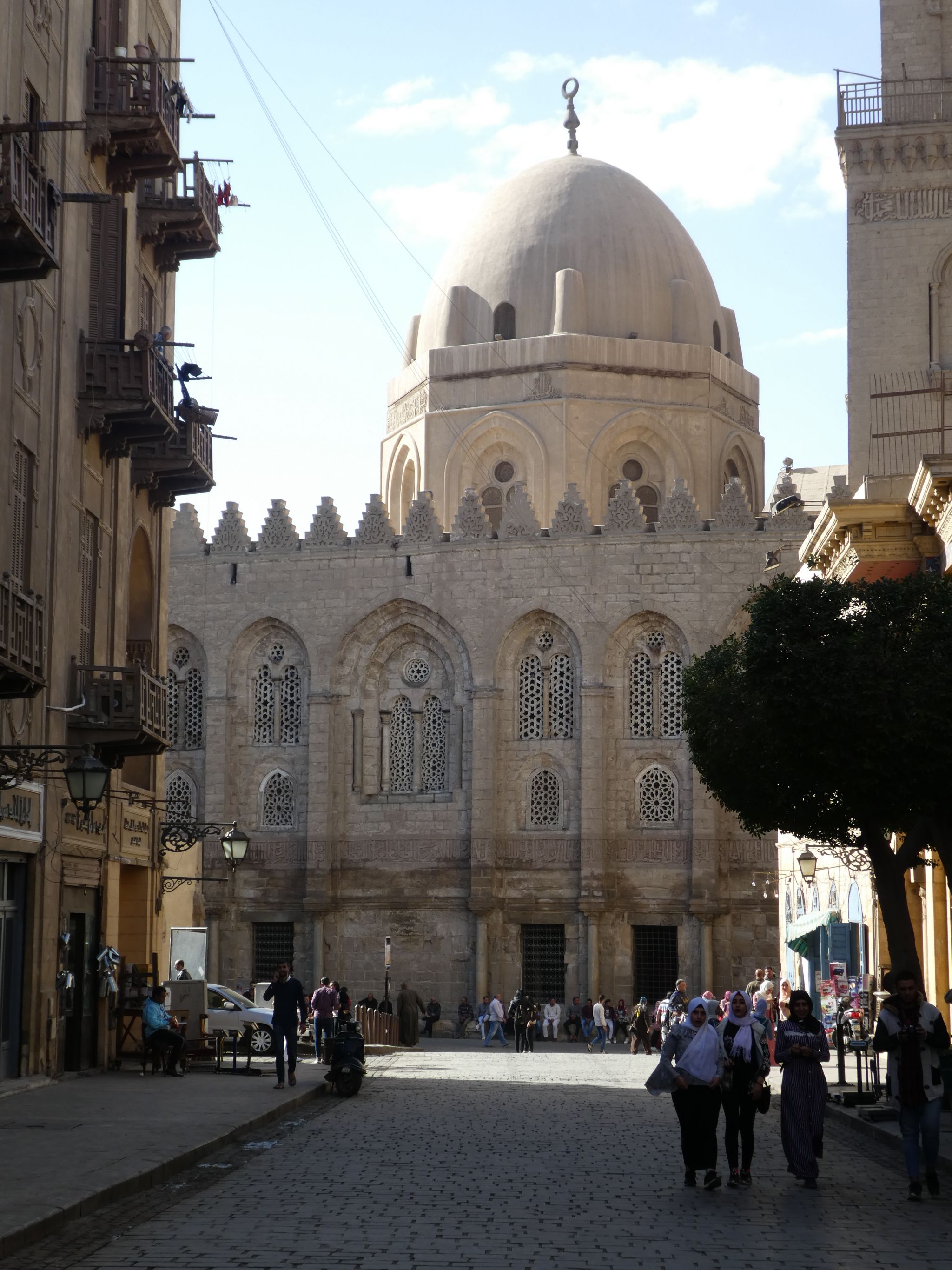 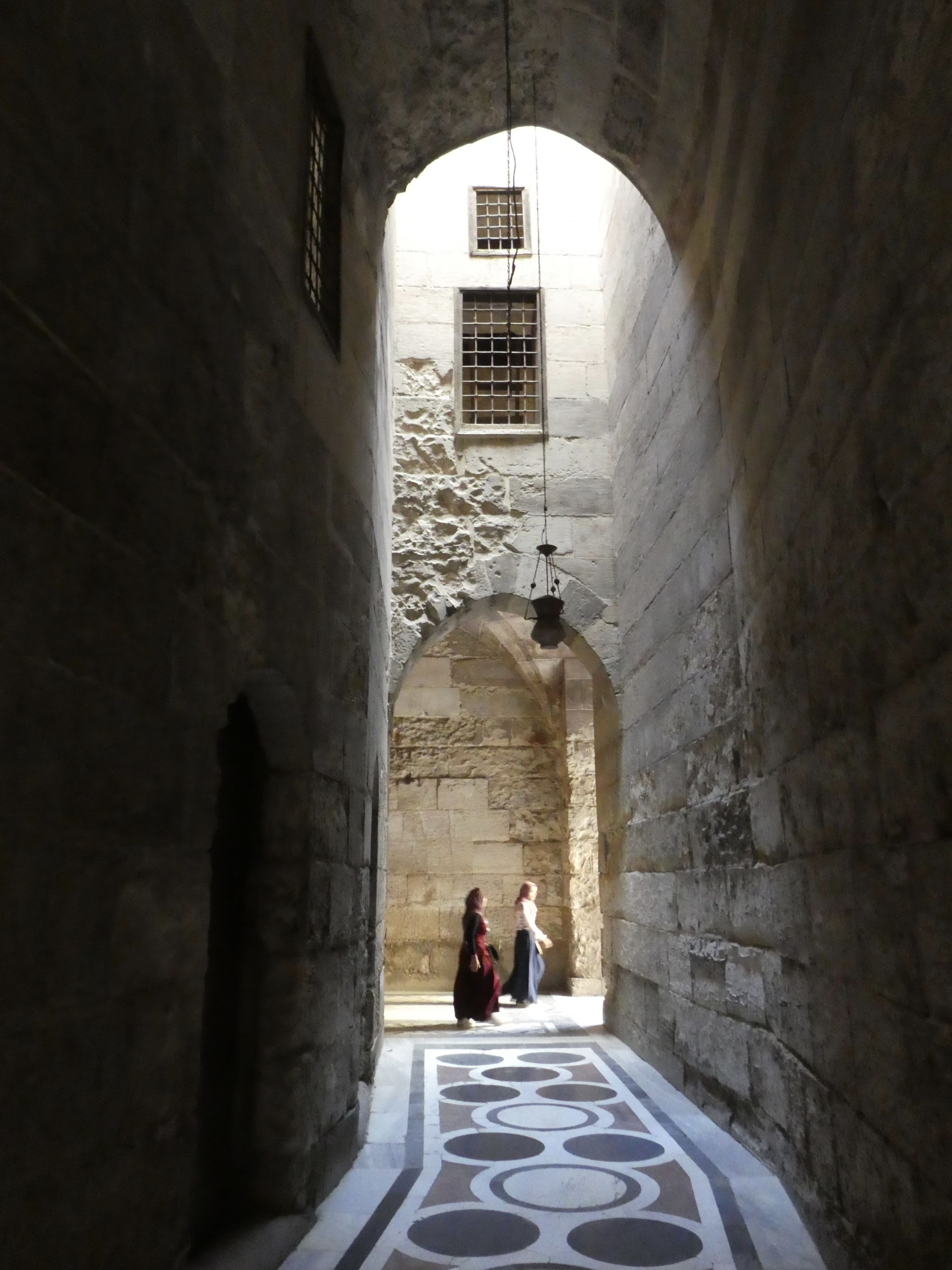 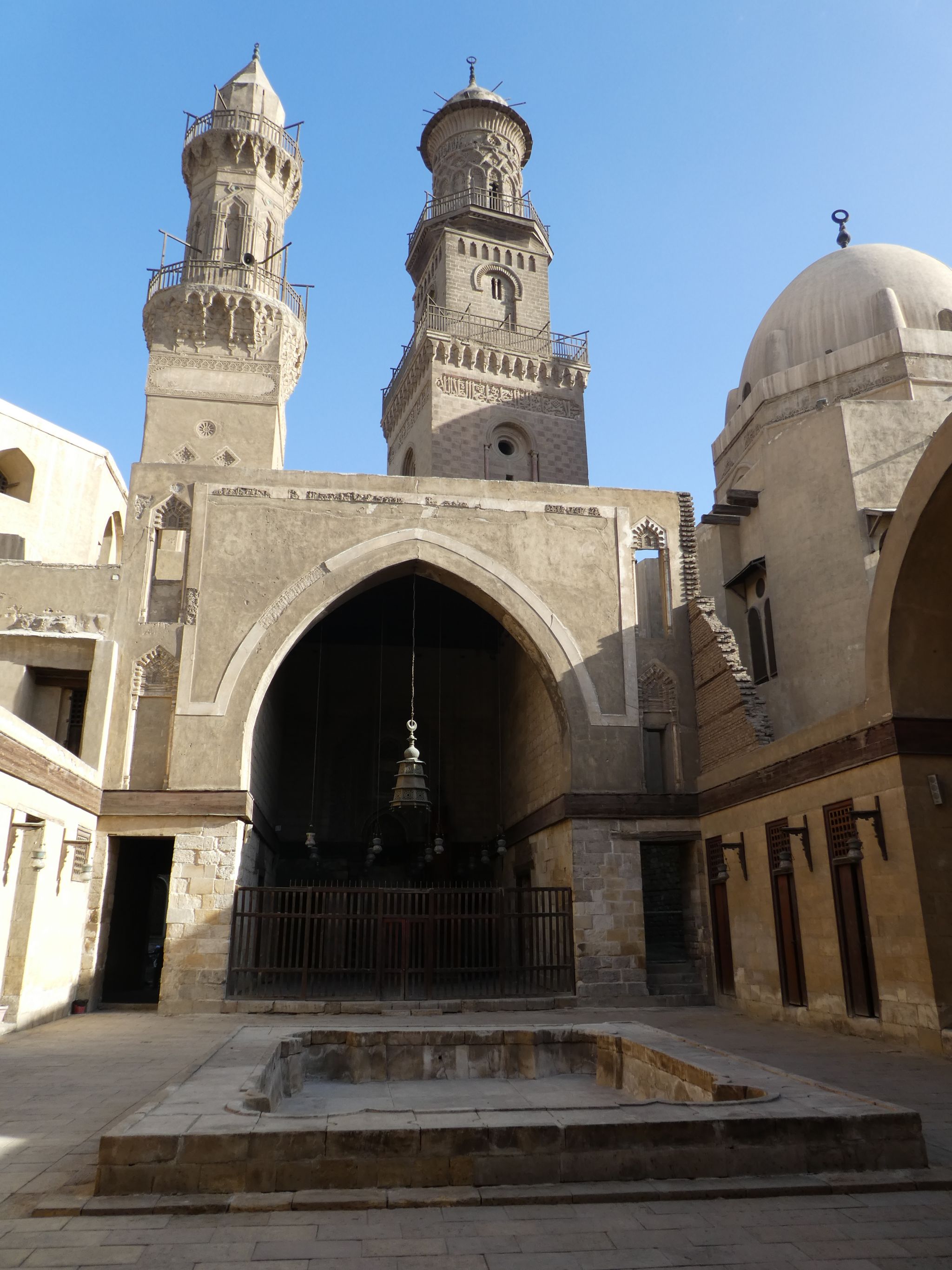 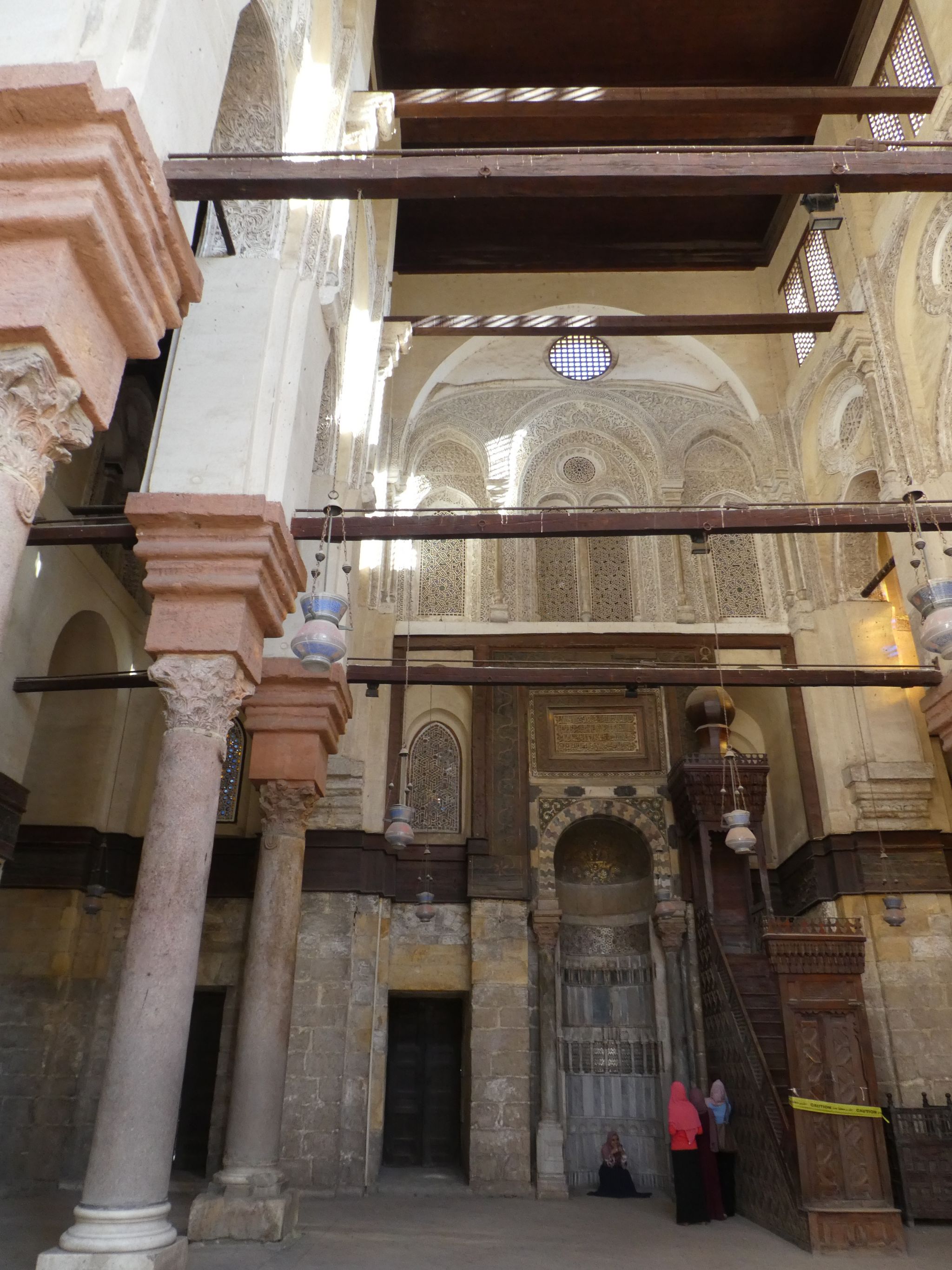 The Bein Al Qasreen (Palace Walk) is vehicle-free during the day and it’s a fabulous melting pot of shops around the monuments. 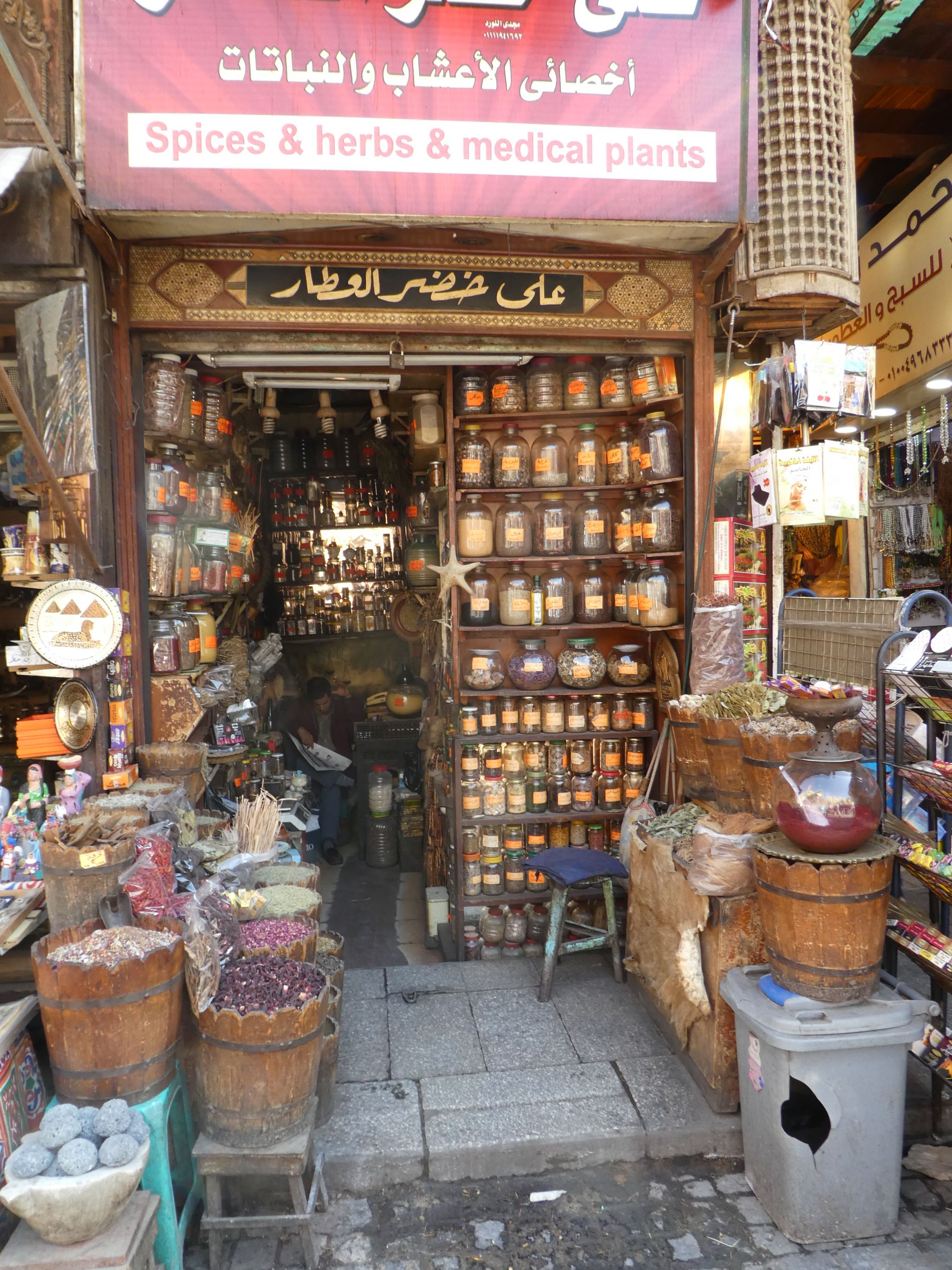 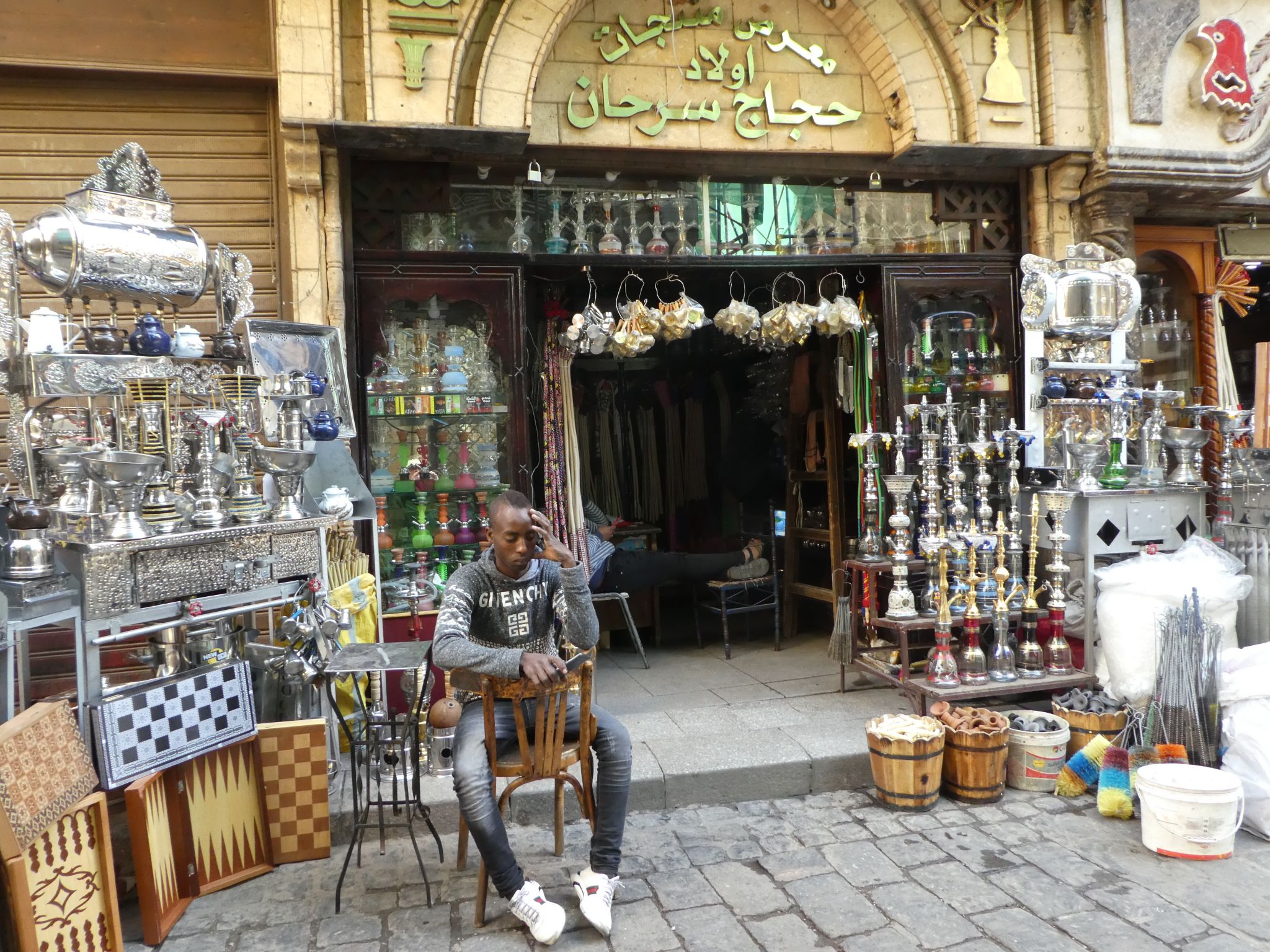 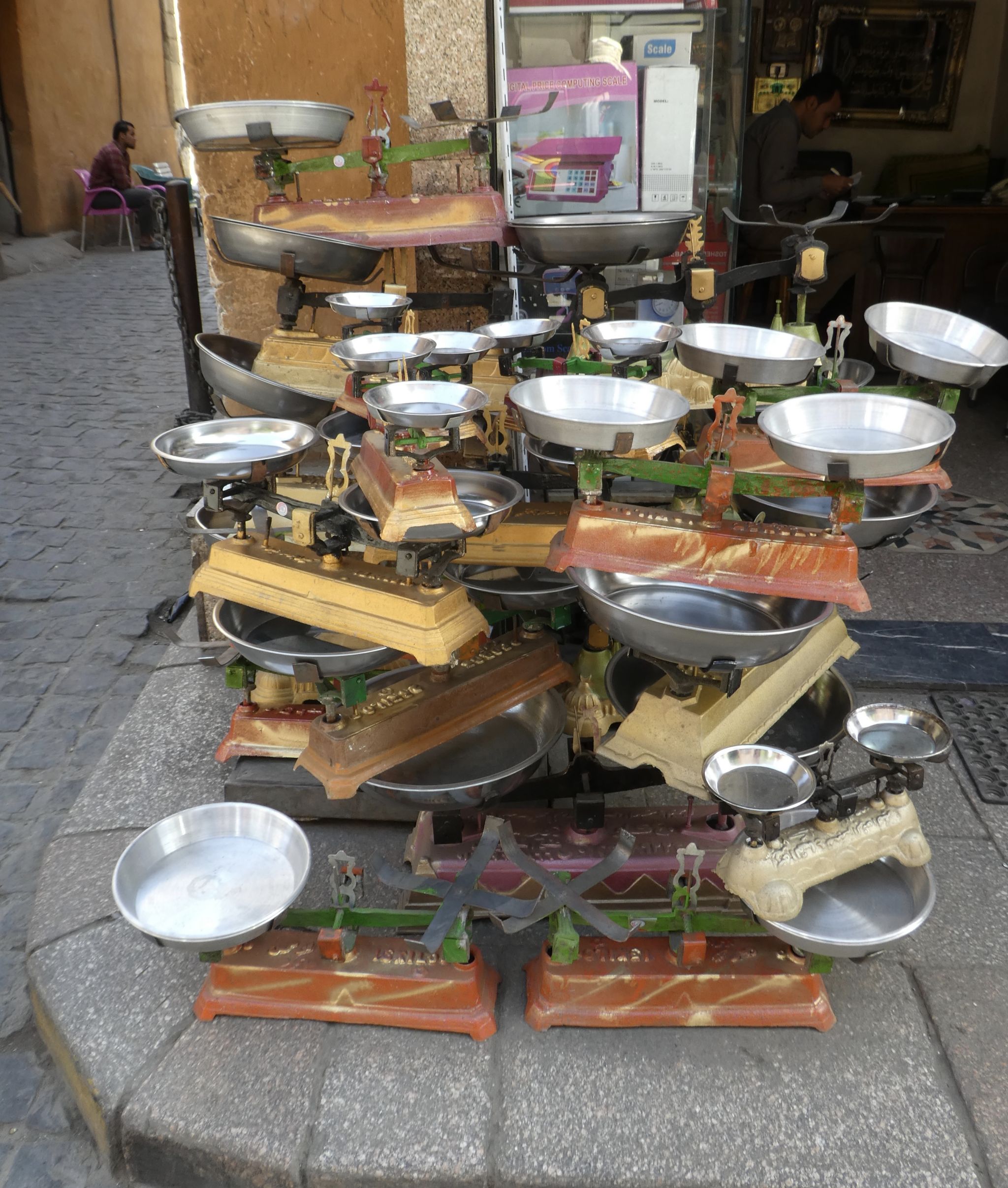 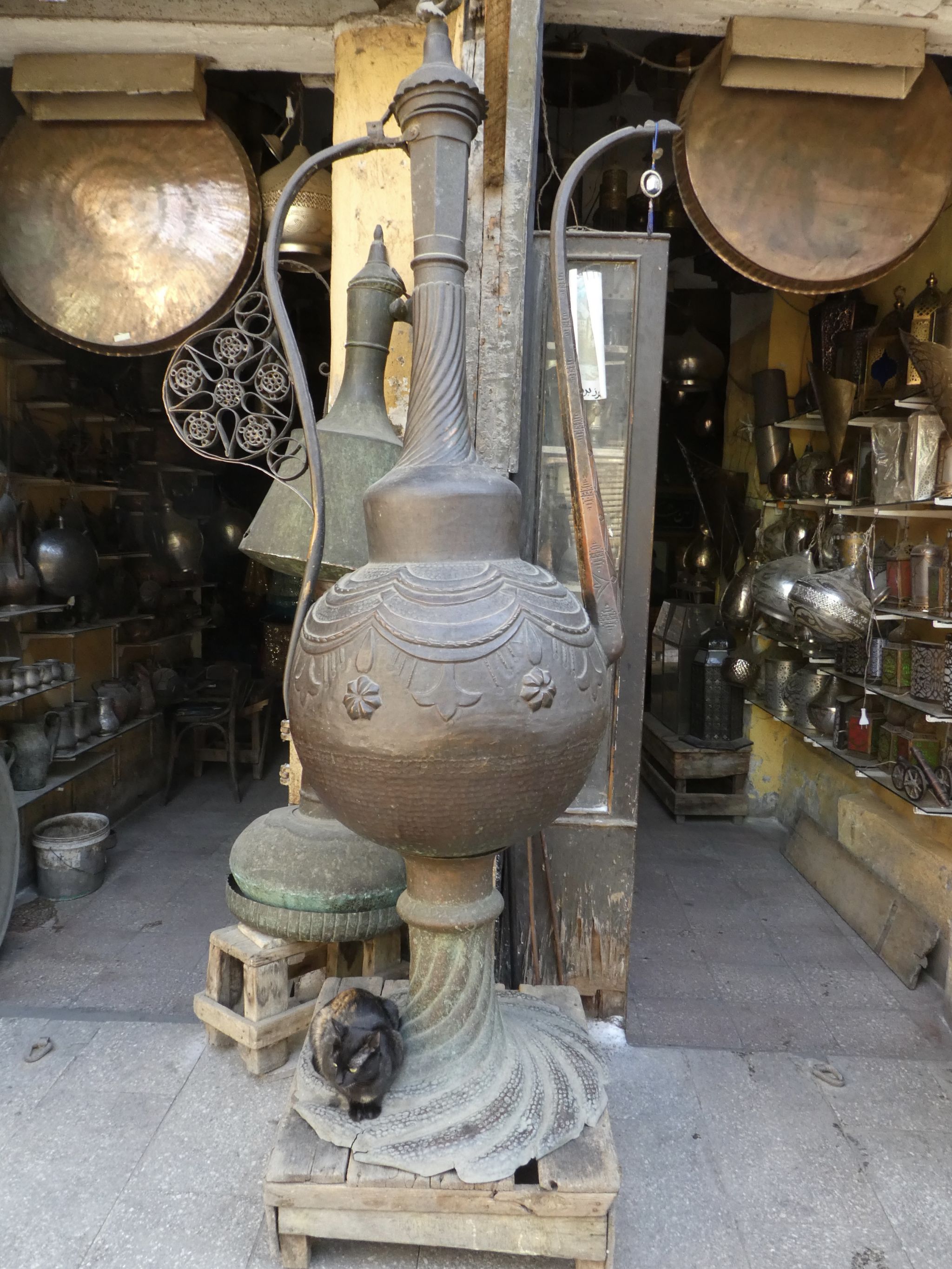 We may have found the answer to why call centre staff are sometimes difficult to understand. 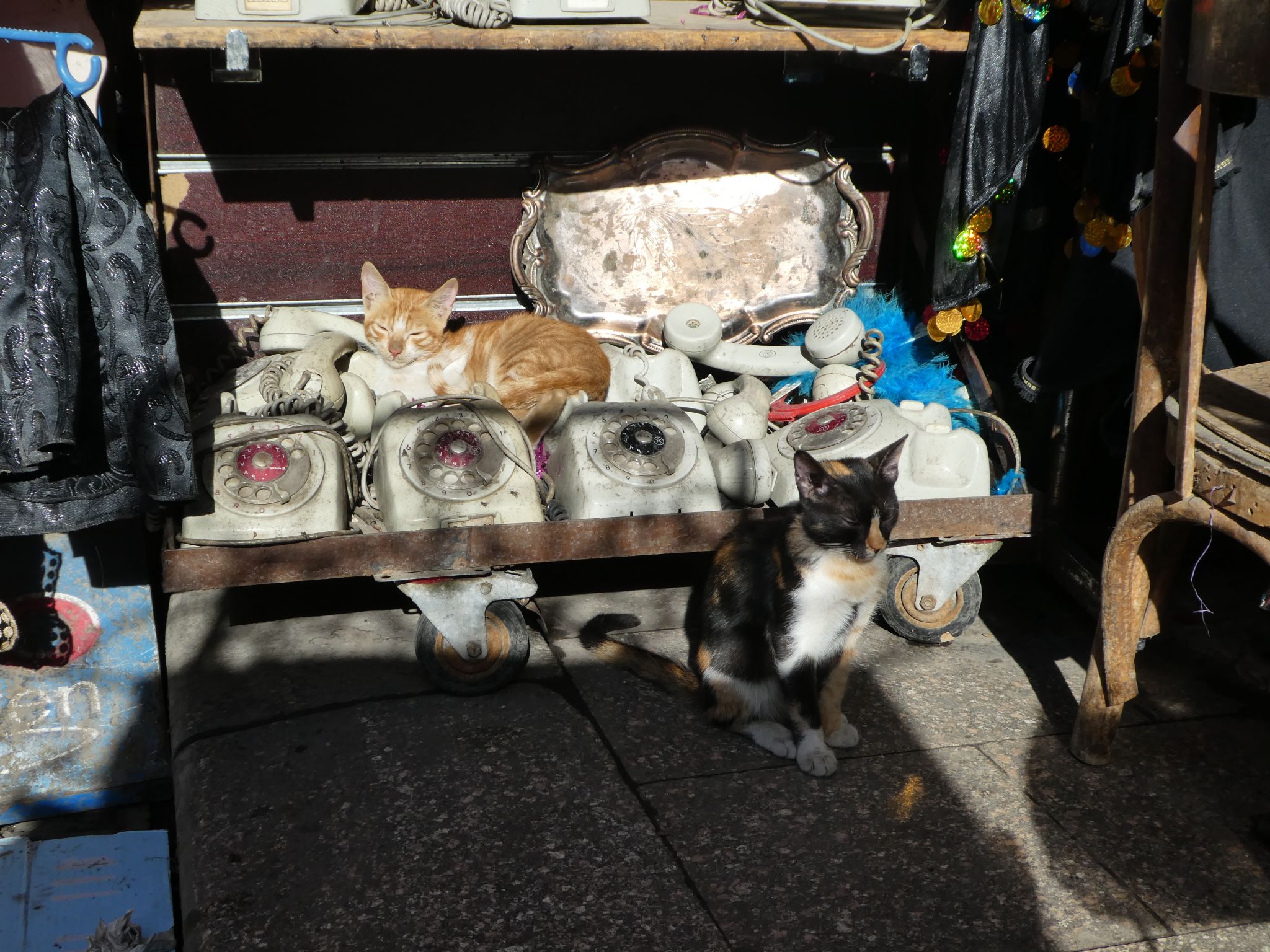 Duck down a side lane and you will find some great food options.  The entire nation is fueled on fuul, a dish of cooked fava beans drizzled with oil, which locals eat for breakfast and all day long.  Usually chilli, salt and cumin are available to be added according to preference, and there’s always bread and often some salad.  The feast in the photo below cost the equivalent of only a couple of dollars. 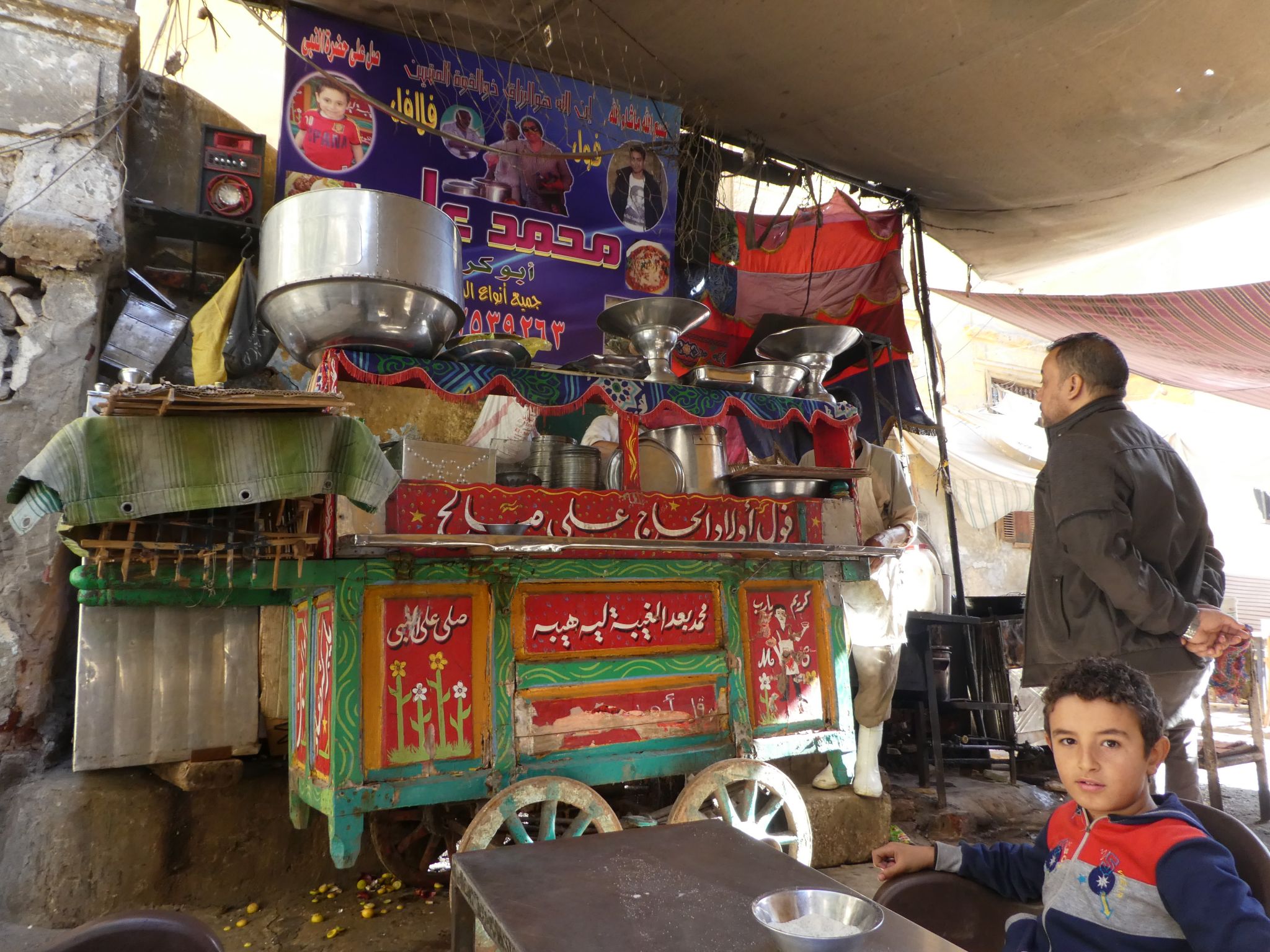 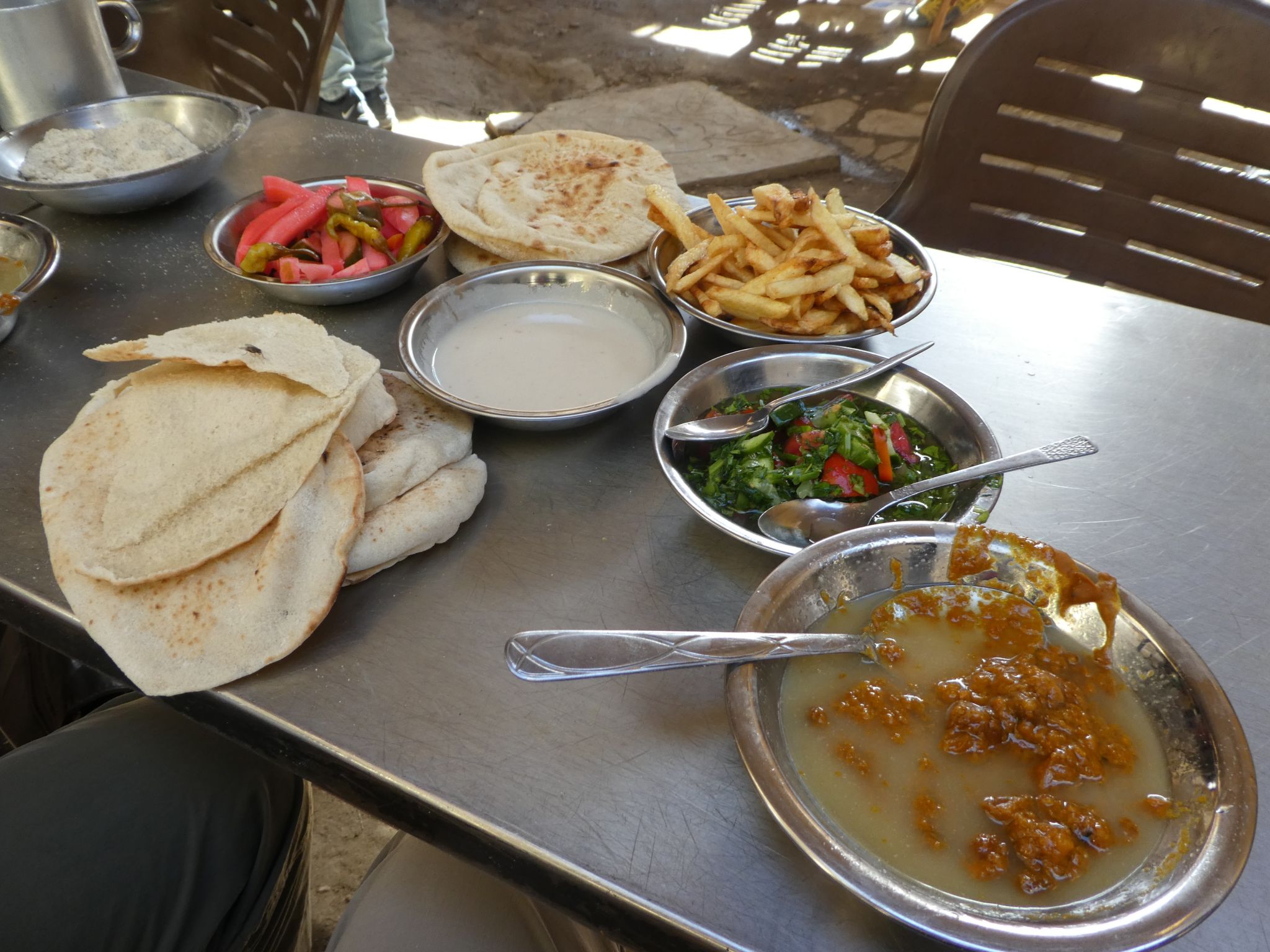 Or you can eat it stuffed into bread.  We practically lived on fuul in Egypt. 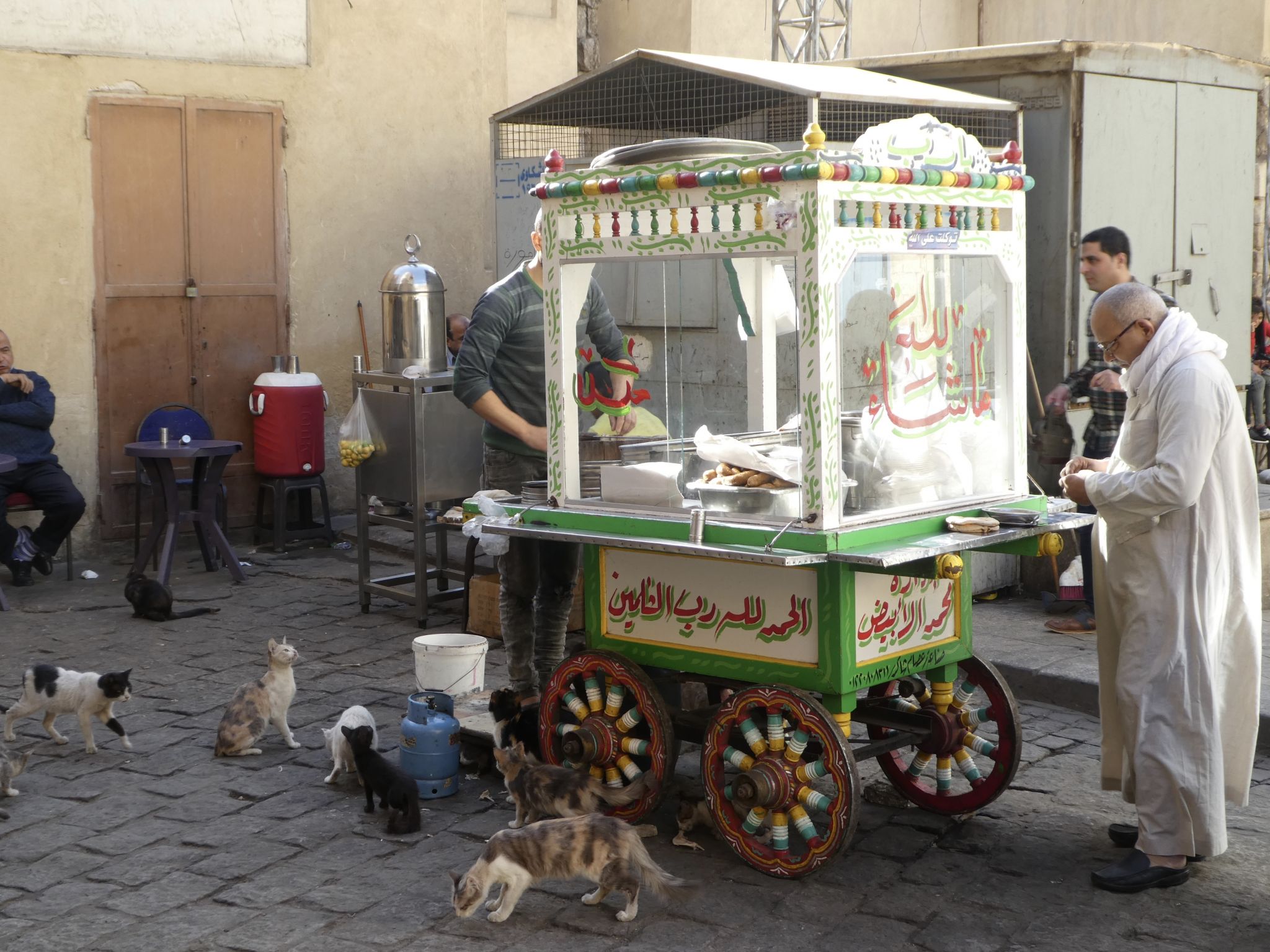 There’s not a lot of room for storage on these little stands.  Bread is taken seriously and fresh deliveries are made through the day.  Not sure where this guy was headed but we really admired his balancing skills as he threaded through the pedestrians then rounded a corner one-handed. 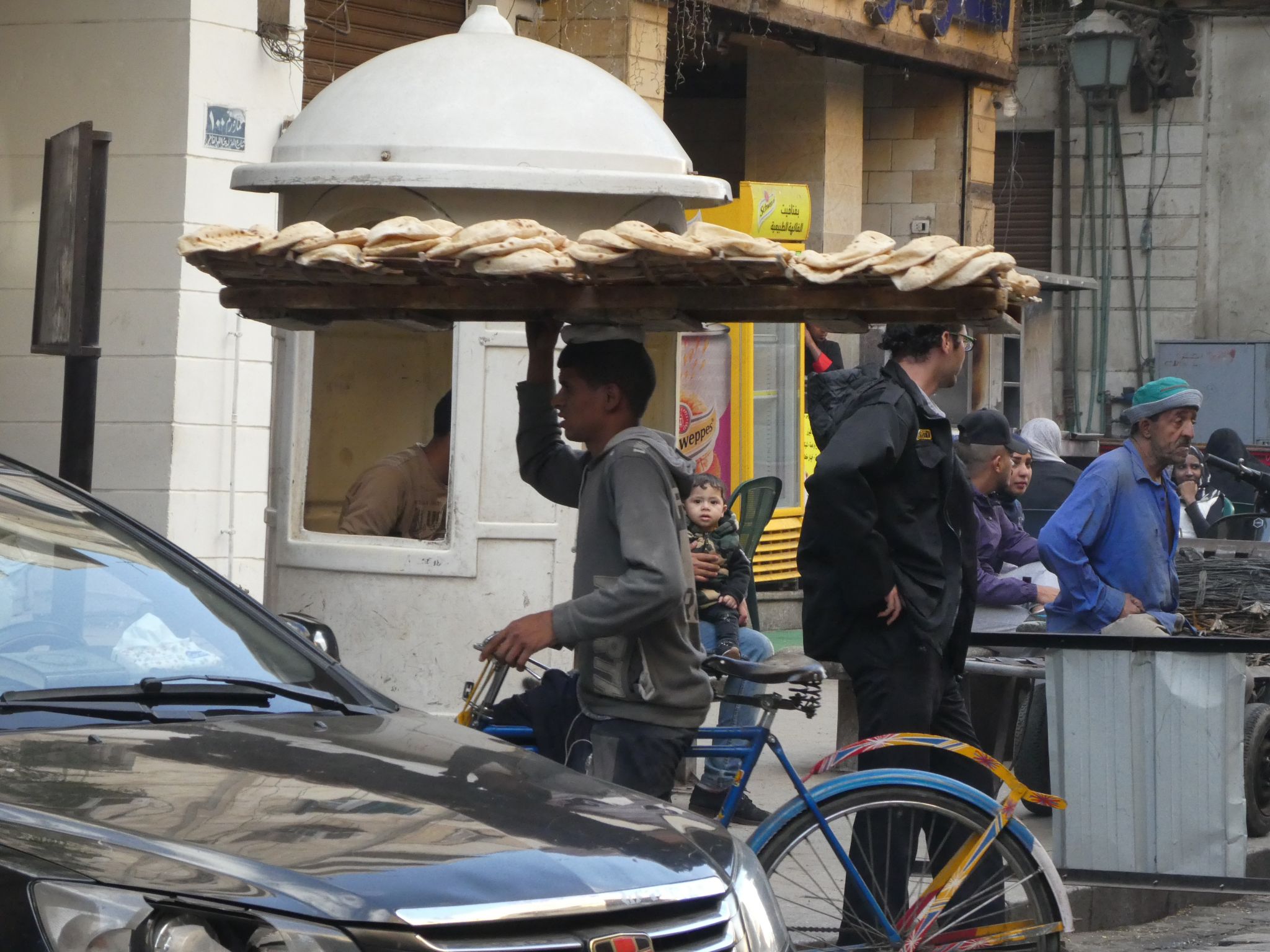 Between the Palace Walk and the metro station is a massive modern souk, with everything necessary for life.  Threading our way back to the metro we found something we’ve never seen before – an entire precinct dedicated to the fabrication of food carts. 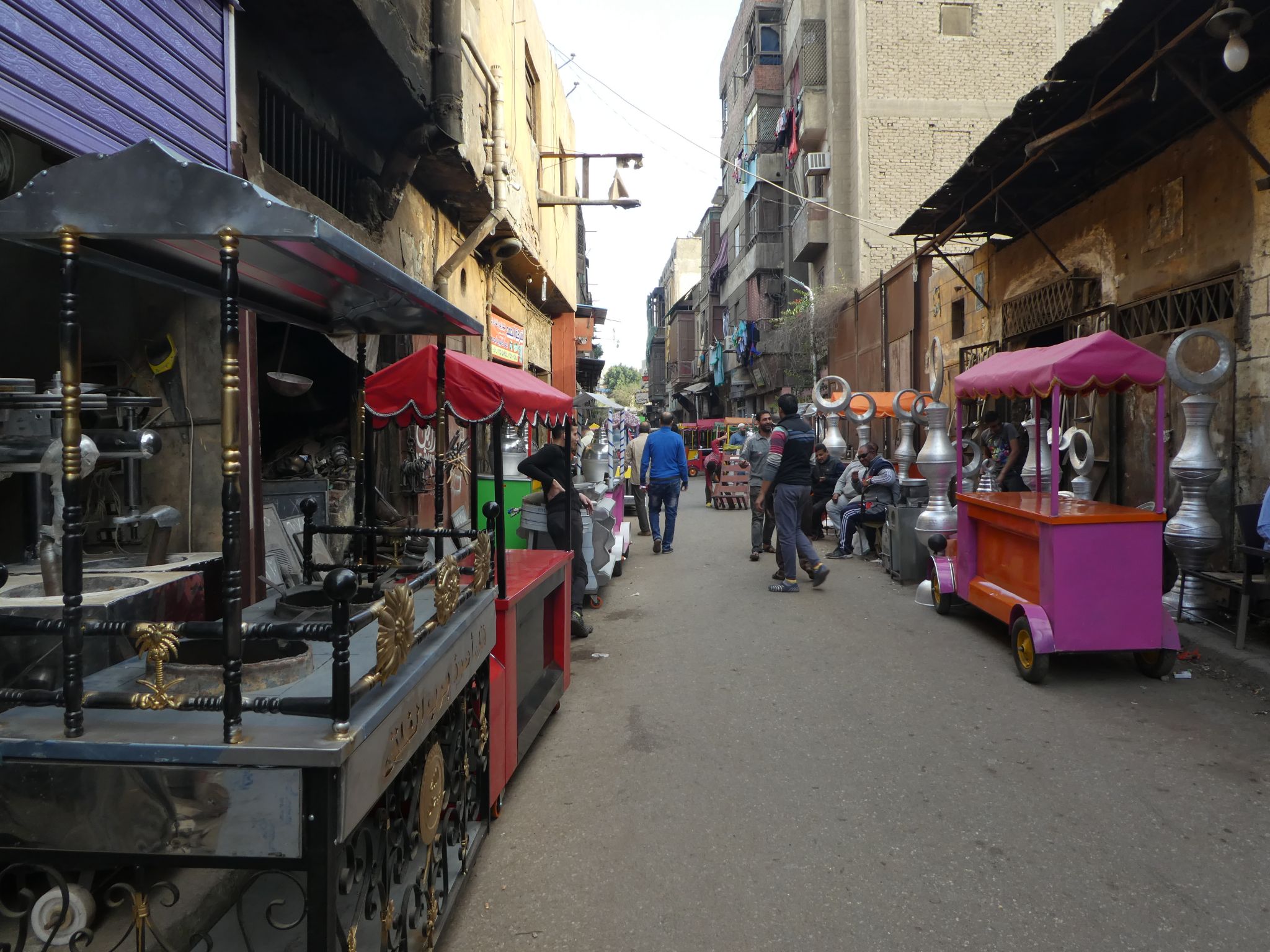 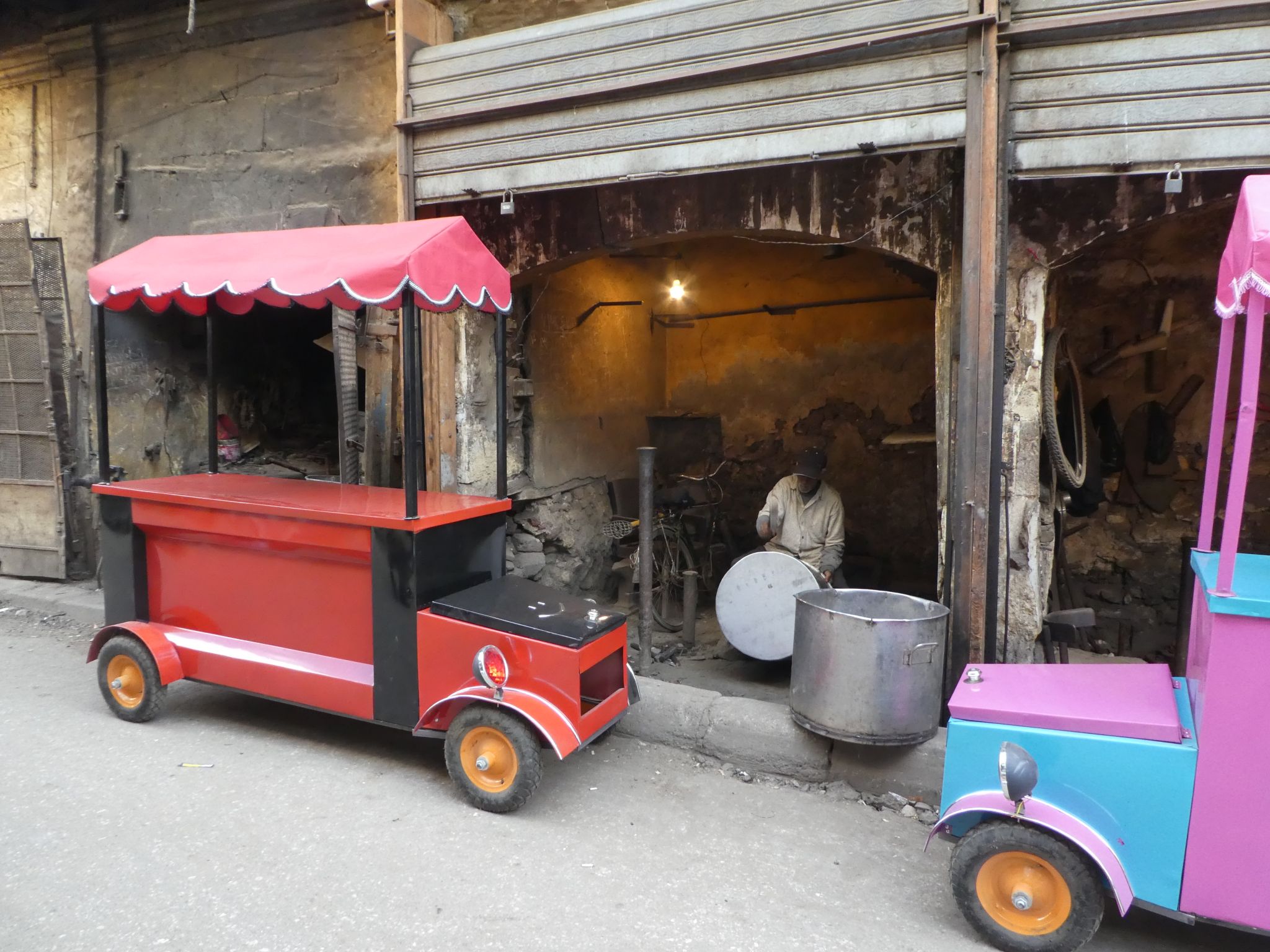 And of course everyone who comes to Cairo goes to the pyramids.  See next post for a report on our day of education on the evolution of the pyramid.