The Pyramids of Giza – sitting quietly, mysteriously in the middle of a vast, uninhabited desert.  If that is your mental image of the pyramids, think again.

The Giza pyramids did once sit in splendid isolation on a desert plain.  The nearest human settlement was along the Nile River, nine kilometres away.  But the relentless expansion of the Cairo suburbs – technically Giza on the west bank of the river – means now there is urban development all the way to the gates of the pyramid compound.  Together with the conga line of tour buses and the relentless predation of spruikers flogging everything from soft toy camels to pyramid key rings, it kinda takes the mystery out of the Giza pyramids.

There are three pyramids at Giza:  the Great Pyramid of Khufu (Cheops), the Pyramid of Khafre and the Pyramid of Menkaure.  They are indeed very big.  In fact, until the early 20th century, Khufu’s pyramid was the biggest building on the planet.   But in terms of interest value in visiting them, really, they just look like the pictures, only bigger. 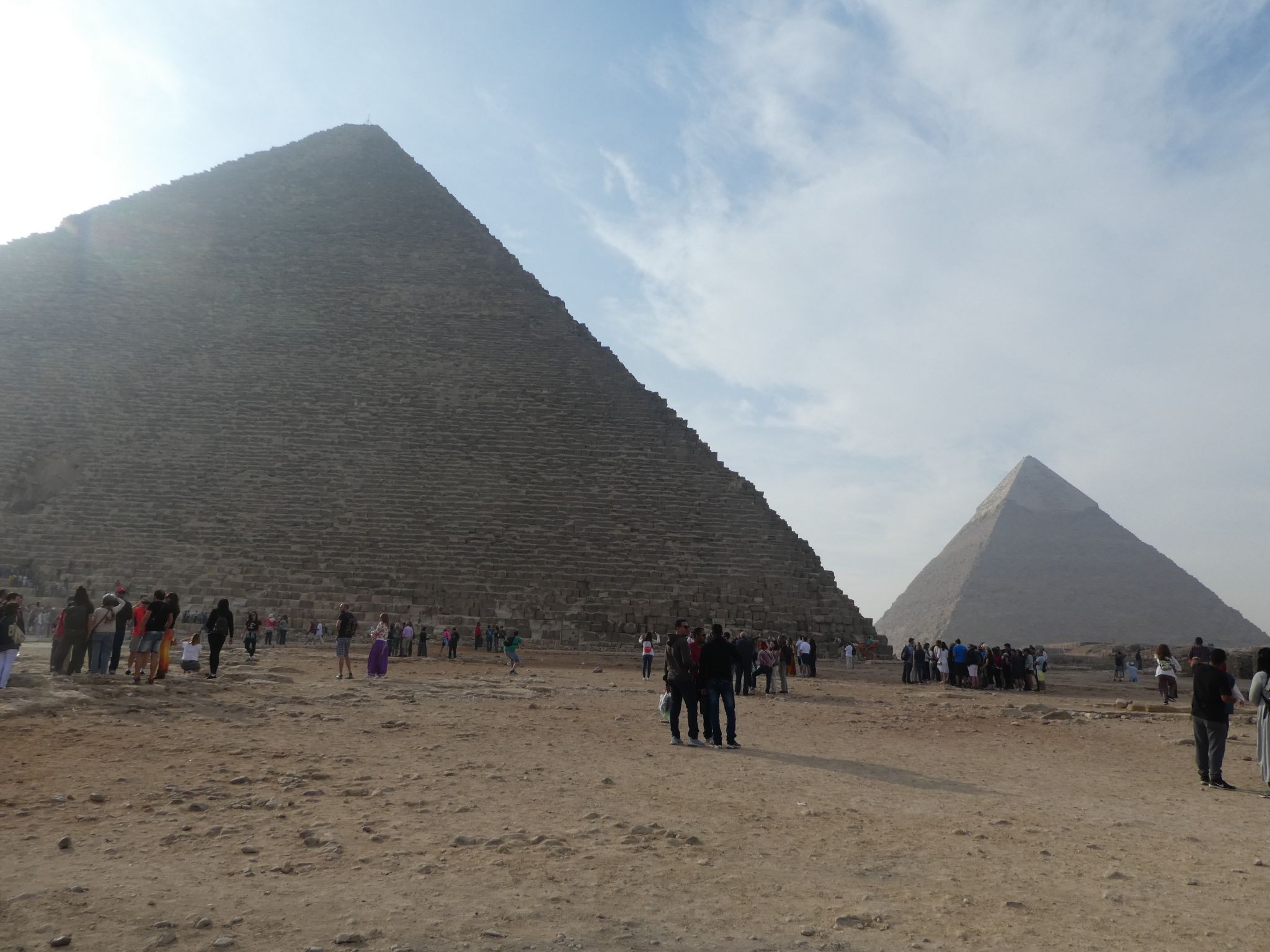 The pyramids may be riddled with mazes and chambers once filled with treasures, but visitors are permitted only to climb up one tunnel straight to the apex.  Imagine squatting on your haunches, leaning forward until your chin nearly touches your knees, then waddling up a 45 degree incline in a passage 1.3 metres high x 1 metre wide.  Is this what it means to walk like an Egyptian??  The temperature is well over 30 degrees  and it’s about as humid as a summer day in the tropics.  Not for the claustrophobic.

And what do you see when you get to the top?  A brick room.  Wow.

Far more interesting is the restored royal barque housed in its own protective pavilion nearby.  Five solar barques buried near Cheops’ pyramid were unearthed in 1954.  It is thought the boats were used to bring the body of the pharaoh up the Nile River to the valley temple, then hauled up a causeway linking the river to the pyramid.  With the pharaoh’s body decanted, the boats were buried near the pyramid, possibly for use by the pharaoh in the afterlife.  One of the boats has been painstakingly restored from 1,200 pieces of Lebanese cedar.  It is possibly the oldest boat in the world. 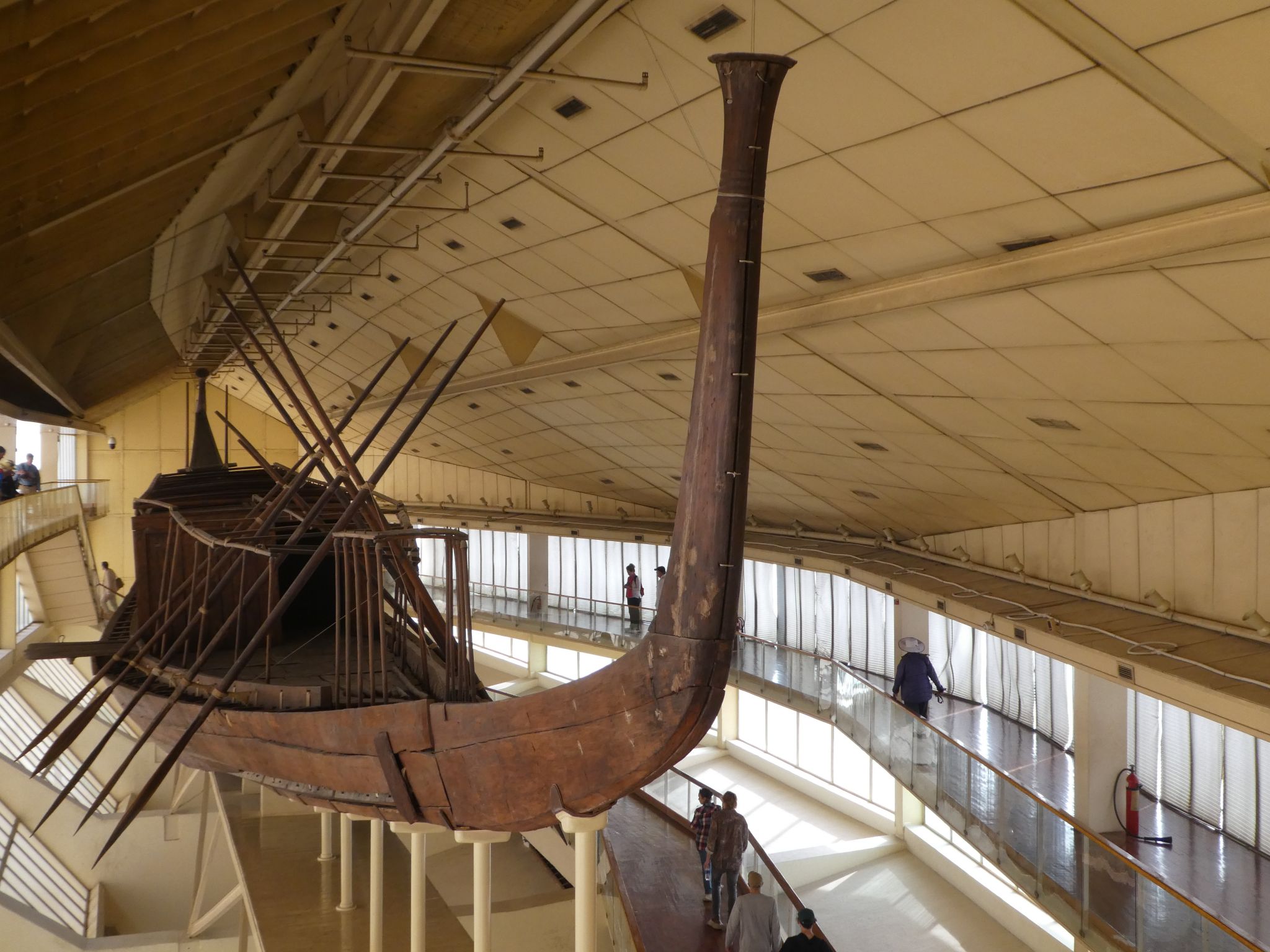 Nearby is the iconic Great Sphinx of Giza.  The poor Sphinx has seen better days.  His nose was hacked off sometime between the 11th and 15th century, his beard has fallen off and part of it sits in the British Museum after being souvenired in the 19th century, and now internal fractures are appearing as a result of pollution and groundwater incursion. 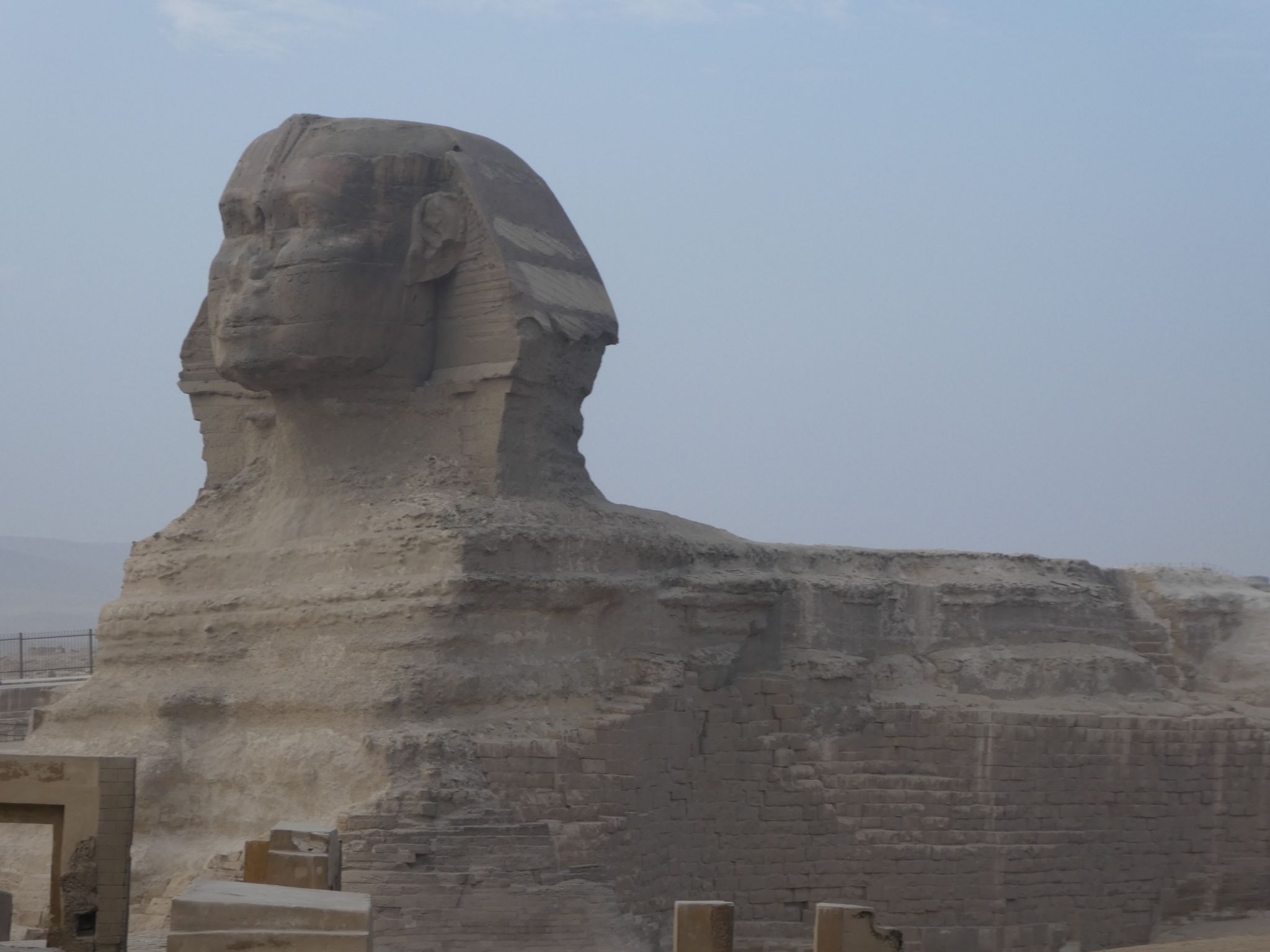 From the Sphinx you get a great panorama of the three pyramids.

The Giza pyramids were all constructed in a 90 year period during the Old Kingdom era.  At that time, the royal capital was Memphis.  The only remaining vestige of that once great city is the open air museum of Mit Rahina.

The key exhibit is this enormous limestone statue of Ramses II, found in six pieces in a riverbed and skilfully restored and housed here.  Still missing his legs though. 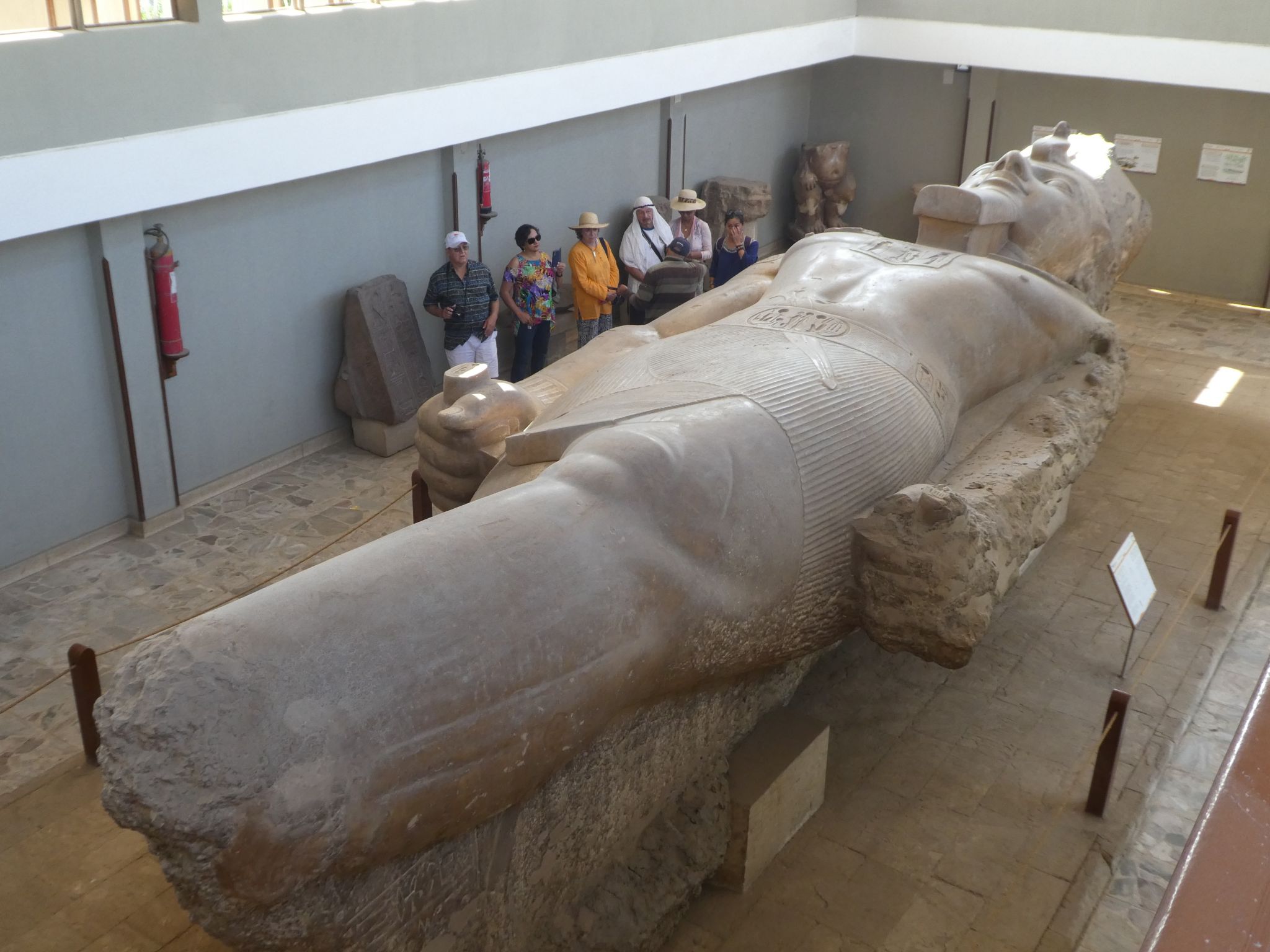 There is also the beautiful Sphinx of Memphis.  It is smaller than the Great Sphinx of Giza but better preserved as it was lost to the desert sands until 1913.  It’s often called the Alabaster Sphinx, but actually it’s made of calcite, a stone similar to alabaster which the ancient Egyptians considered to have a mystical solar connection.  It is historically significant as it is one of the few female sphinxes made by the ancient Egyptians, and because it is the largest calcite statue ever discovered. 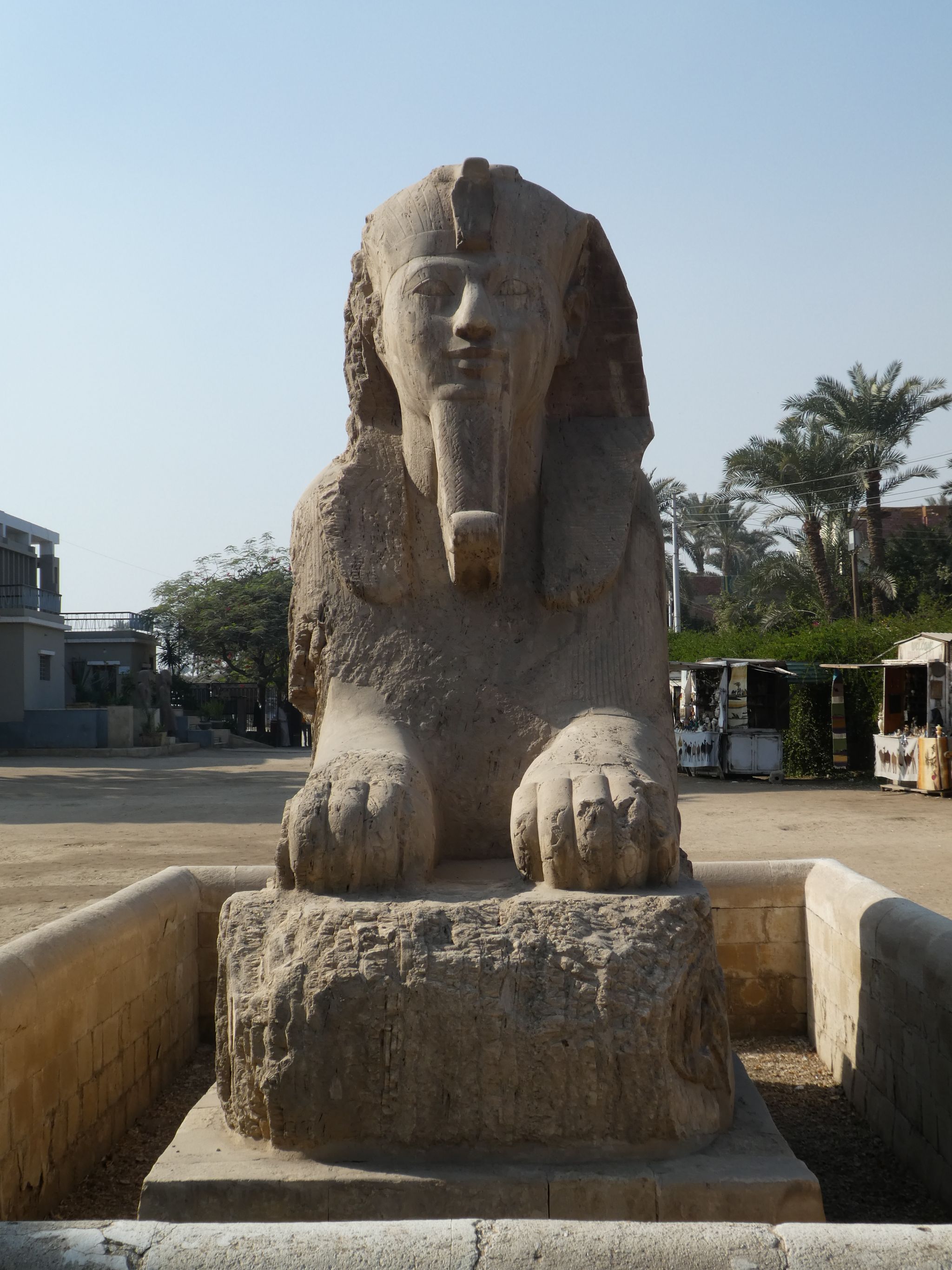 The Giza pyramids represent the pinnacle of pyramid architecture, if you will pardon the pun.  The last step in the evolution of the perfect form.  If you’ve ever wondered how this art form developed, a visit to Saqqara and Darshur, both in the greater Nile delta, yields some answers.

Prior to the time of the pyramids, Egyptians royals were buried in a tomb, which was then covered by a mastaba, which is basically a mud brick structure in the shape of a bench.  Then, one day in 2650BCE, Pharaoh Zoser apparently woke up and thought “Mud brick benches are boring, I think I’d like a step pyramid”, and asked his chief architect, Imhotep, to design him one.

History does not record whether Imhotep responded “Ok, but what exactly is a step pyramid?”  History does confirm that the resulting Step Pyramid of Zoser at Saqqara was a resounding engineering success.  Still standing more than 4,500 years after it was built, it is thought to be the oldest stone monument in the world.

The Step Pyramid is 60 metres high and surrounded by a vast funerary complex entered via a hypostile hall.  Imhotep, by all accounts a brilliant architect, was later deified.  Gratitude doesn’t come any higher than that. 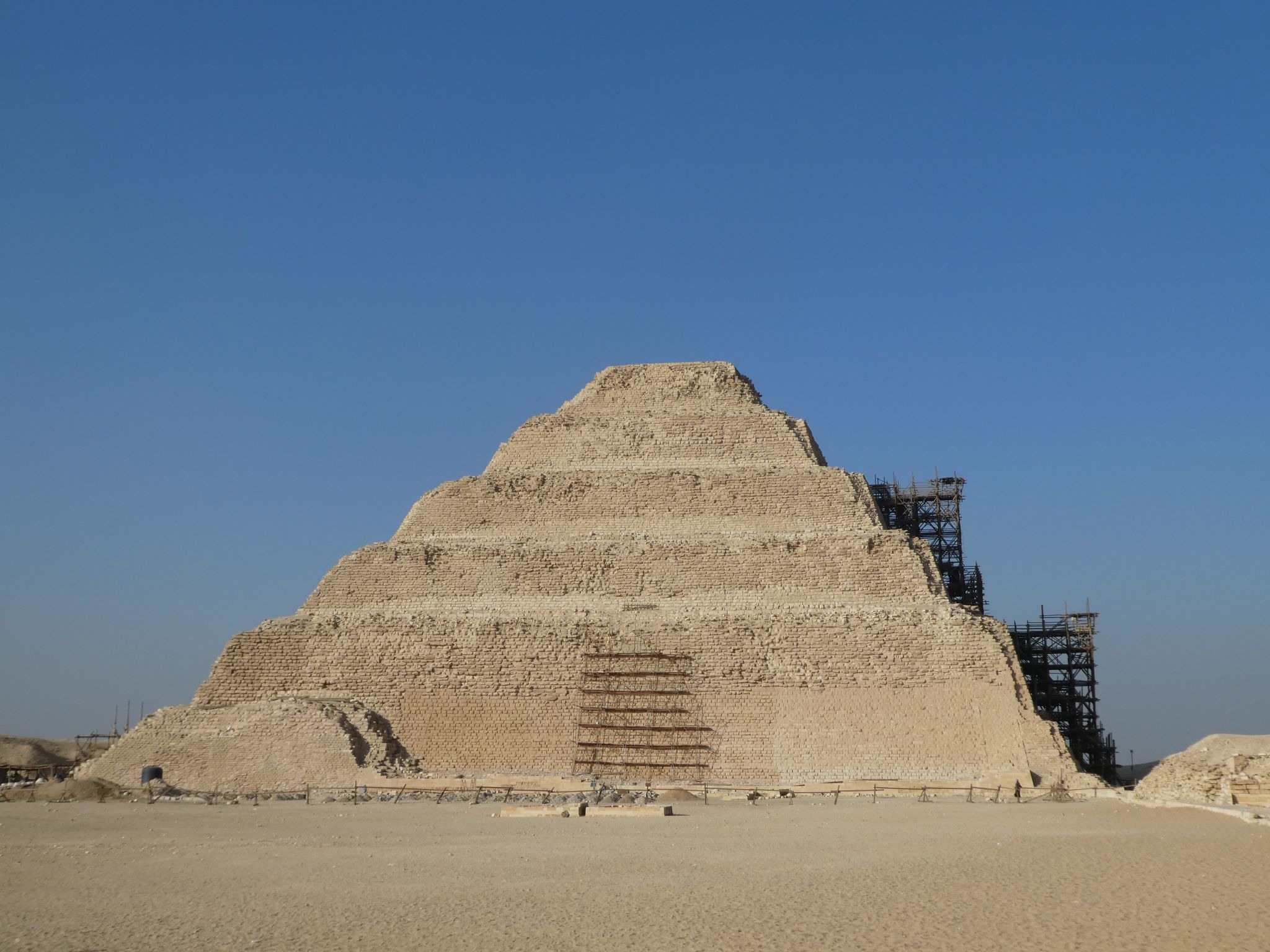 Later pharaohs became more ambitious.  A smooth sided pyramid would be nice.  An early iteration started with the same slant angle as a step pyramid but part way up, signs of instability appeared and they changed the angle.  An engineering fail resulting in the aptly named Bent Pyramid.  Oops. 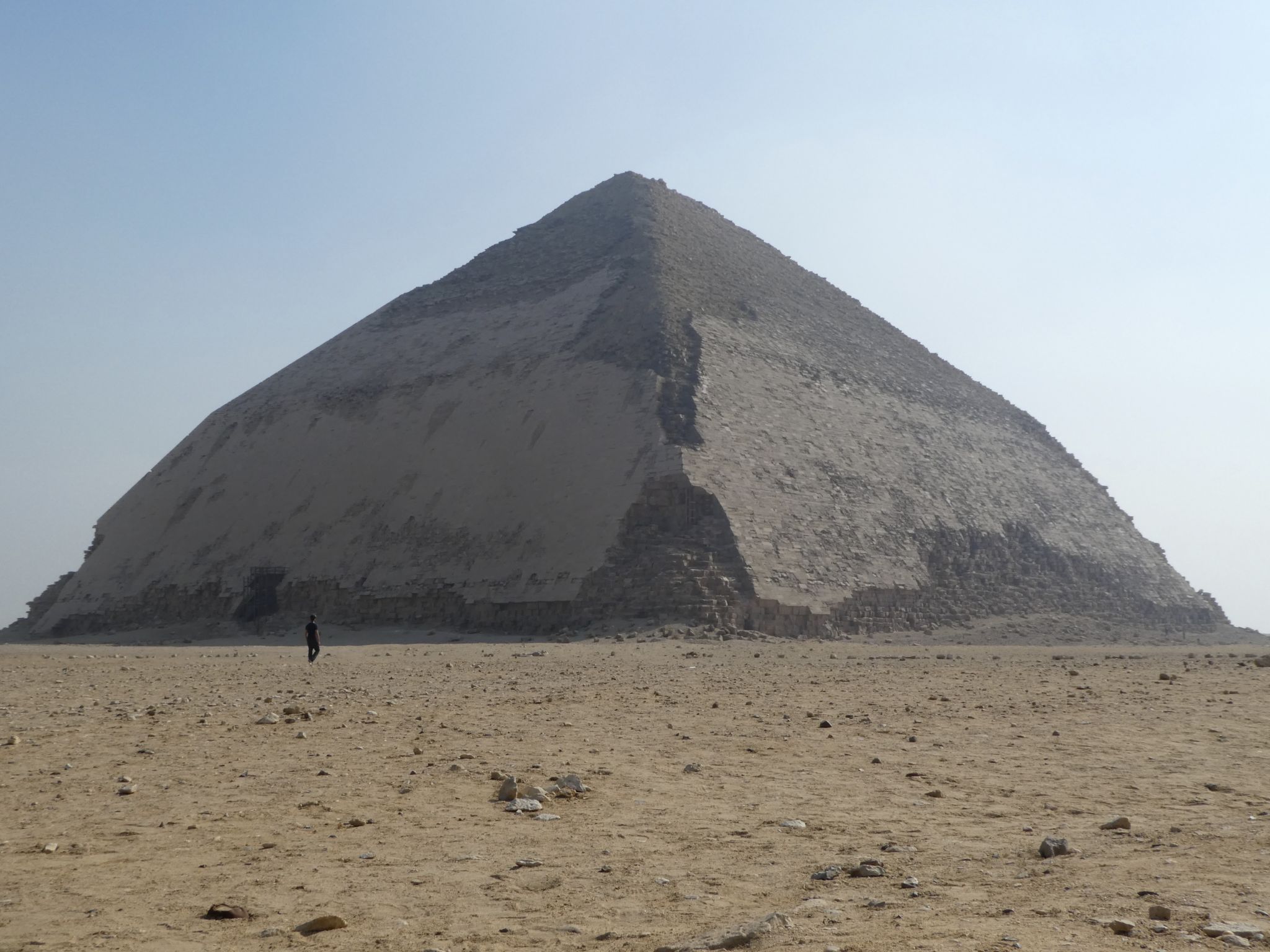 Learning from the mistakes which resulted in the misshapen Bent Pyramid, the architects changed the angle, and the resultant Red Pyramid is the first true pyramid. 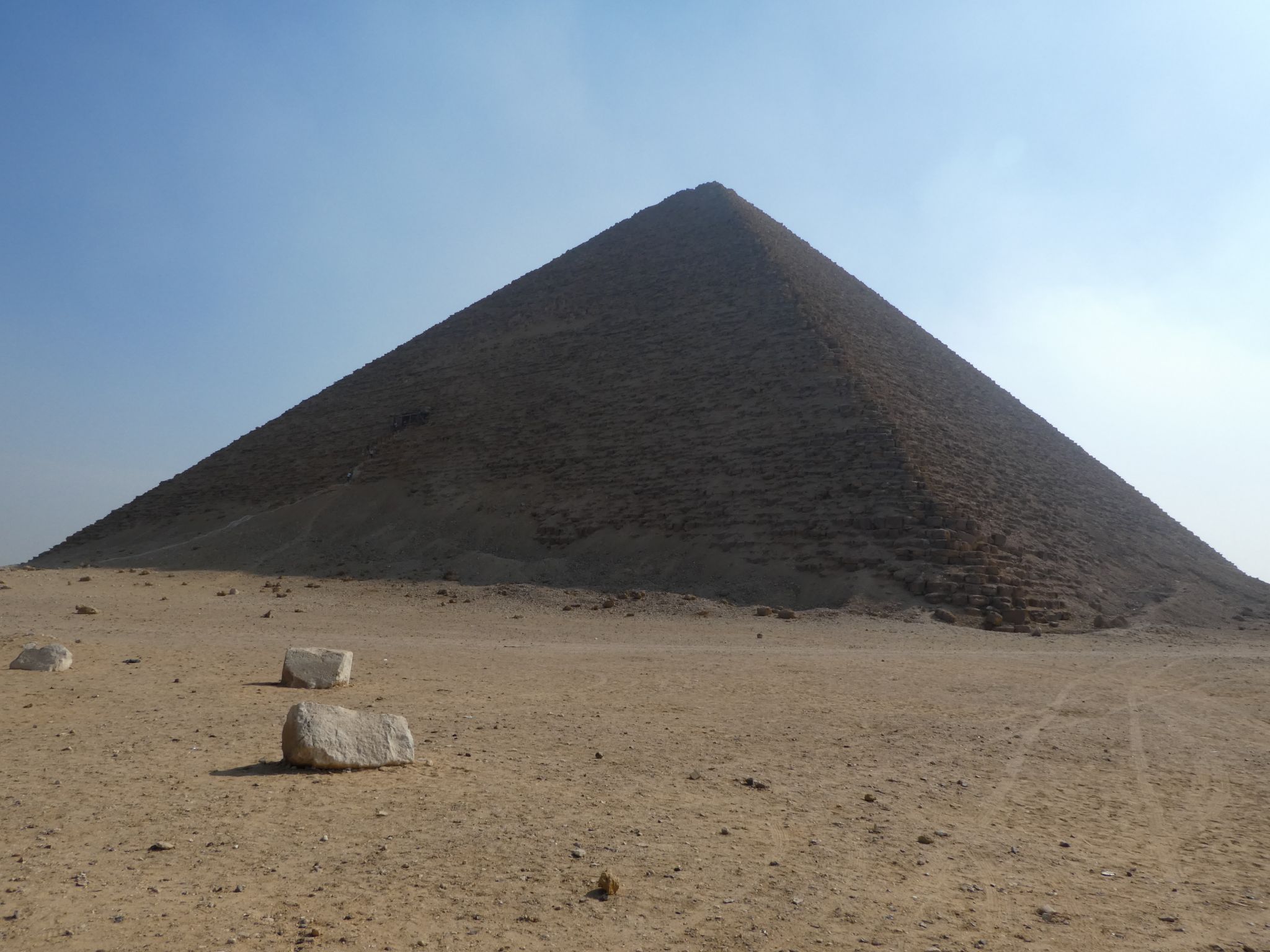 The Bent Pyramid and Red Pyramid are within walking distance of each other at Darshur.  You can climb into the Red Pyramid, once more practicing the claustrophic act of ‘walking like an Egyptian’. 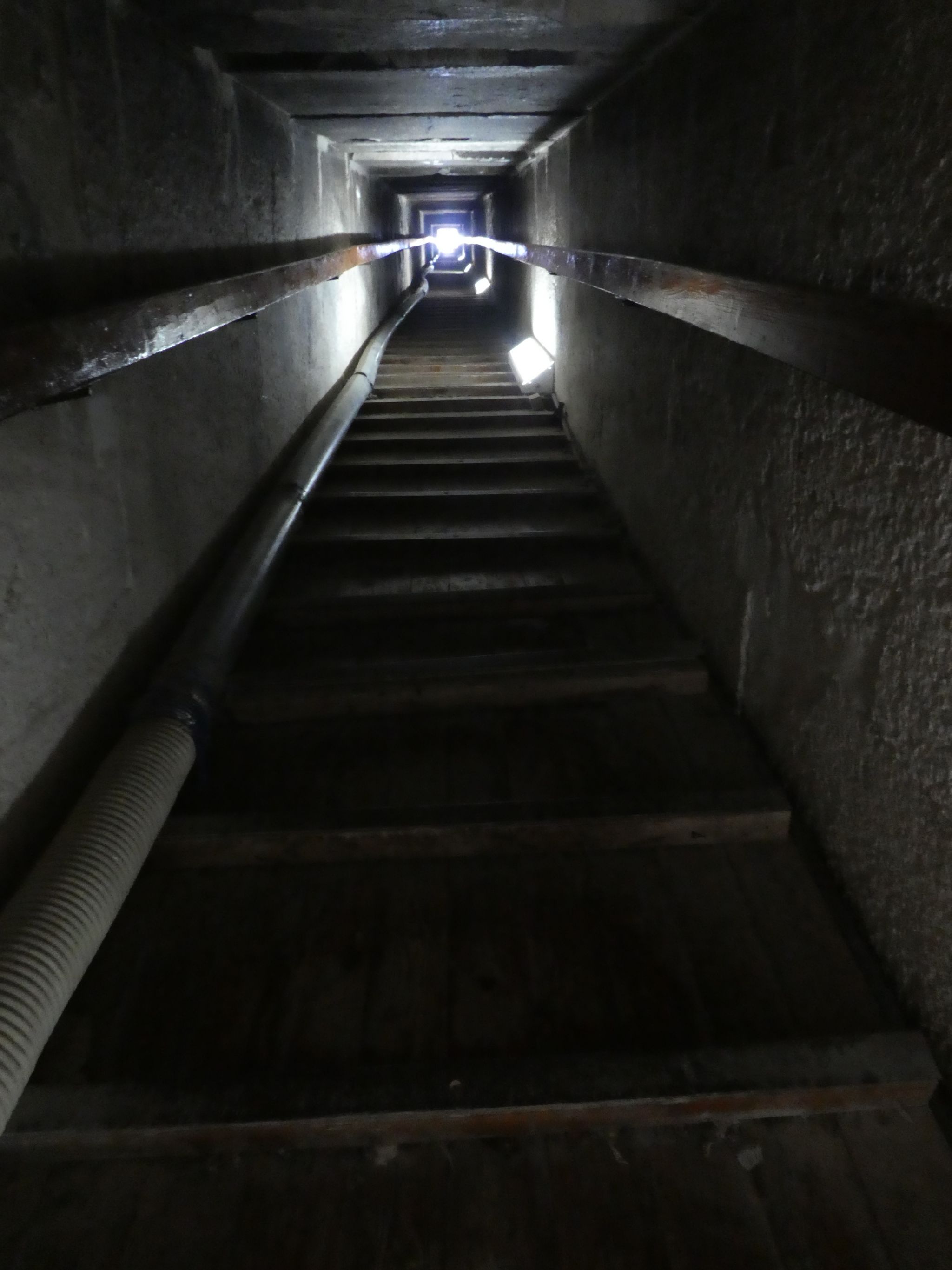 It seems like everyone visits Giza, and a fair number get to Saqqara.  By comparison, visitors to Darshur are few.  This is great for those who do.  At Darshur you get something much more like the pyramid experience most people would aspire to have – quiet, virtually tourist-free pyramids at an isolated site in a relatively unspoilt desert landscape.

Lots of drivers offer trips from Cairo out to Saqqara and Memphis.  It’s worth negotiating to add Darshur as well, and easily all achievable in one day.  Just be sure to tell the driver you do not want to stop at the perfume factory, papyrus factory, cotton factory etc, etc, etc….