It is probably fair to say that Alexandria is more famous for what once was, than what now is.  Mention the name, and most people will think of the Lighthouse of Alexandria which was one of the Seven Wonders of the Ancient World and the famous Library from the time when the Greeks ruled Egypt.

The Lighthouse was built in 400BCE and, at an estimated 100metres high, was for centuries one of the tallest man-made structures in the world.  It operated for 1700 years before collapsing in an earthquake in 1303CE.  The rubble lay unused for another 100 years until being reused to build the Qaitbey Fort. 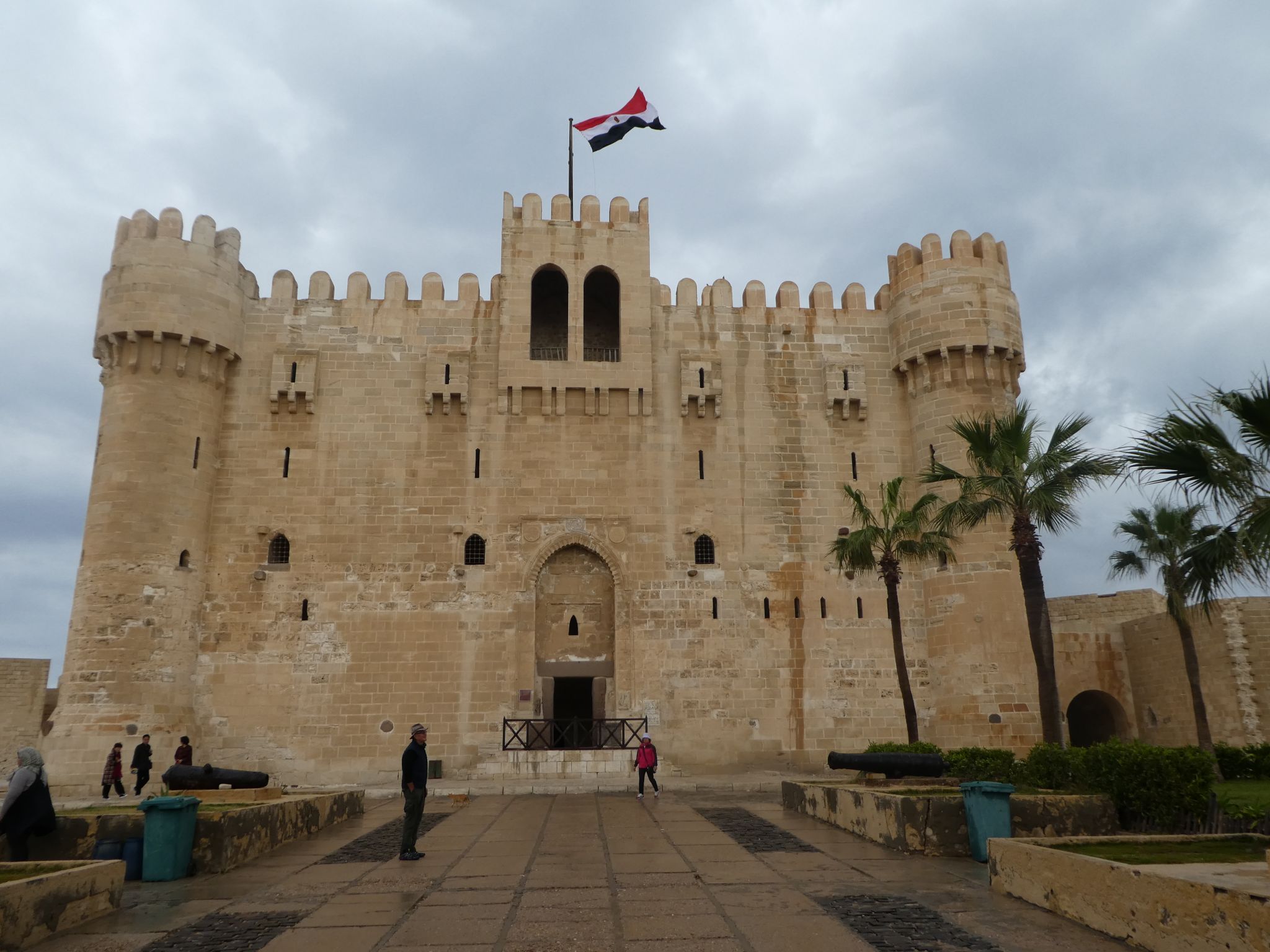 The famous Alexandria Library contained a collection of scrolls and manuscripts gathered from around the then known world, and was the greatest ever repository of knowledge prior to the invention of the internet.  There is debate around exactly how it was destroyed, but it seems most likely that during his occupation of Alexandria in 48BCE, Julius Caesar ordered the ships of the Egyptian fleet in the harbour be burned, and the fire got out of control and spread to parts of the city including the library.

An alternative story, which is unlikely to be true but illustrates the size of the library’s collection, is that when the city was captured by the Arab army of Caliph Omar in 640CE, the collection was used to heat the 4,000 bathhouses in the city – and there were enough manuscripts to fuel the bathhouses for six months.

A new Bibliotheca Alexandria, inaugurated in 2002, is designed to look like an angled discus, supposedly evoking a ‘second rising’ of the famous library.  The library complex is home to the Antiquities Museum and the small but nicely curated Manuscript Museum with a collection of ancient texts, including the only surviving scroll from the ancient library.  It is a working library, and the huge glass reading room is impressive, with a modern collection of more than 8 million books.  Surveying the stacks and study nooks brought back memories of our student days, and not in a good way! 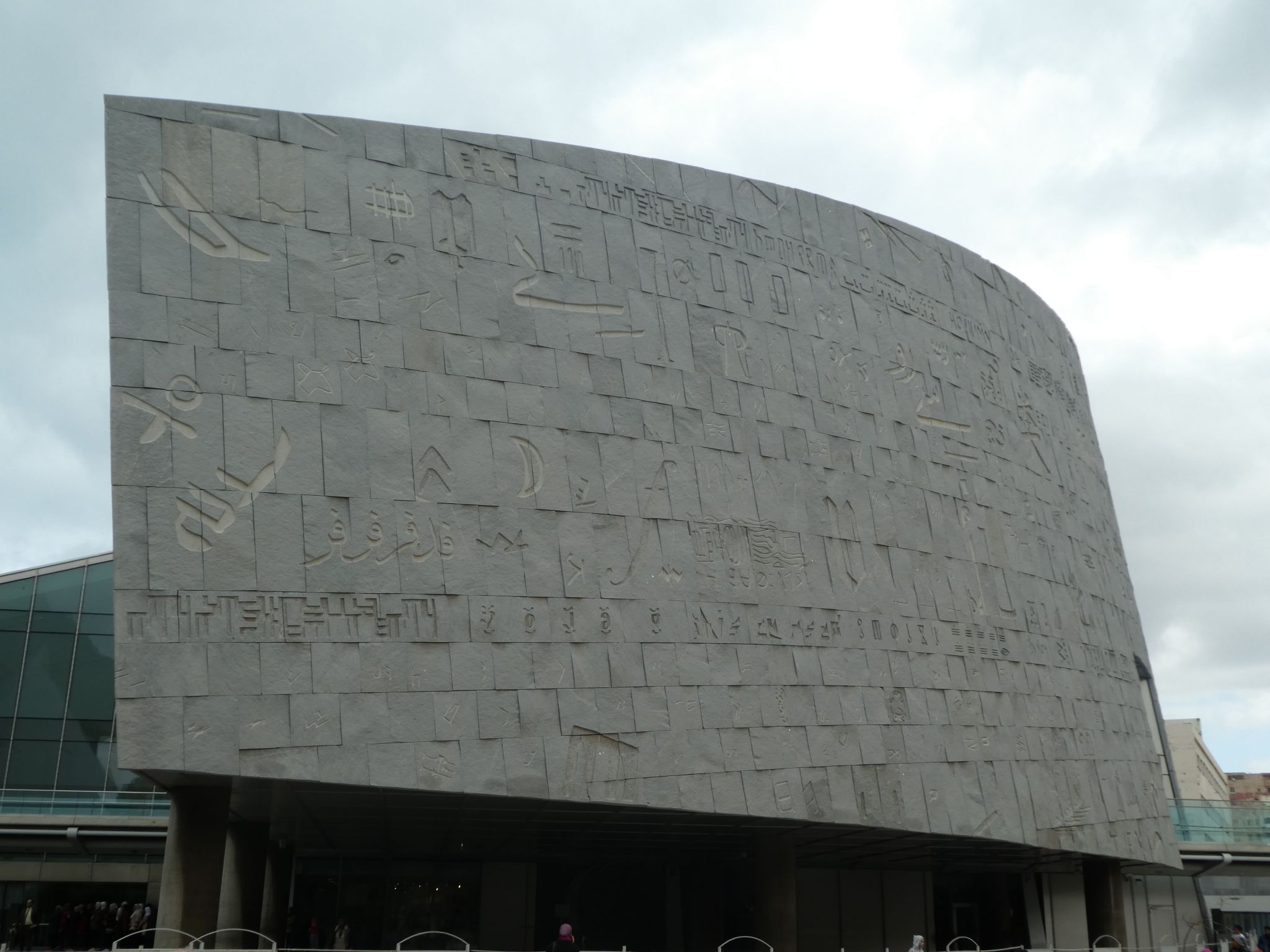 Between the Fort and the new Library, the old city of Alexandria is built around the corniche, a perfect arc around a calm harbour.

In the late 1800s and early 1900s, Alexandria was one of the busiest ports in the Mediterranean and 40% of its residents were foreigners.  That era crashed to a halt when Colonel Nasser came to power in 1952 and, a few years later triggered the Suez Crisis in which the State confiscated foreign property and nationalised many foreign-owned businesses.

All along the corniche there are reminders of that era, in the form of ageing European style buildings long past their prime. 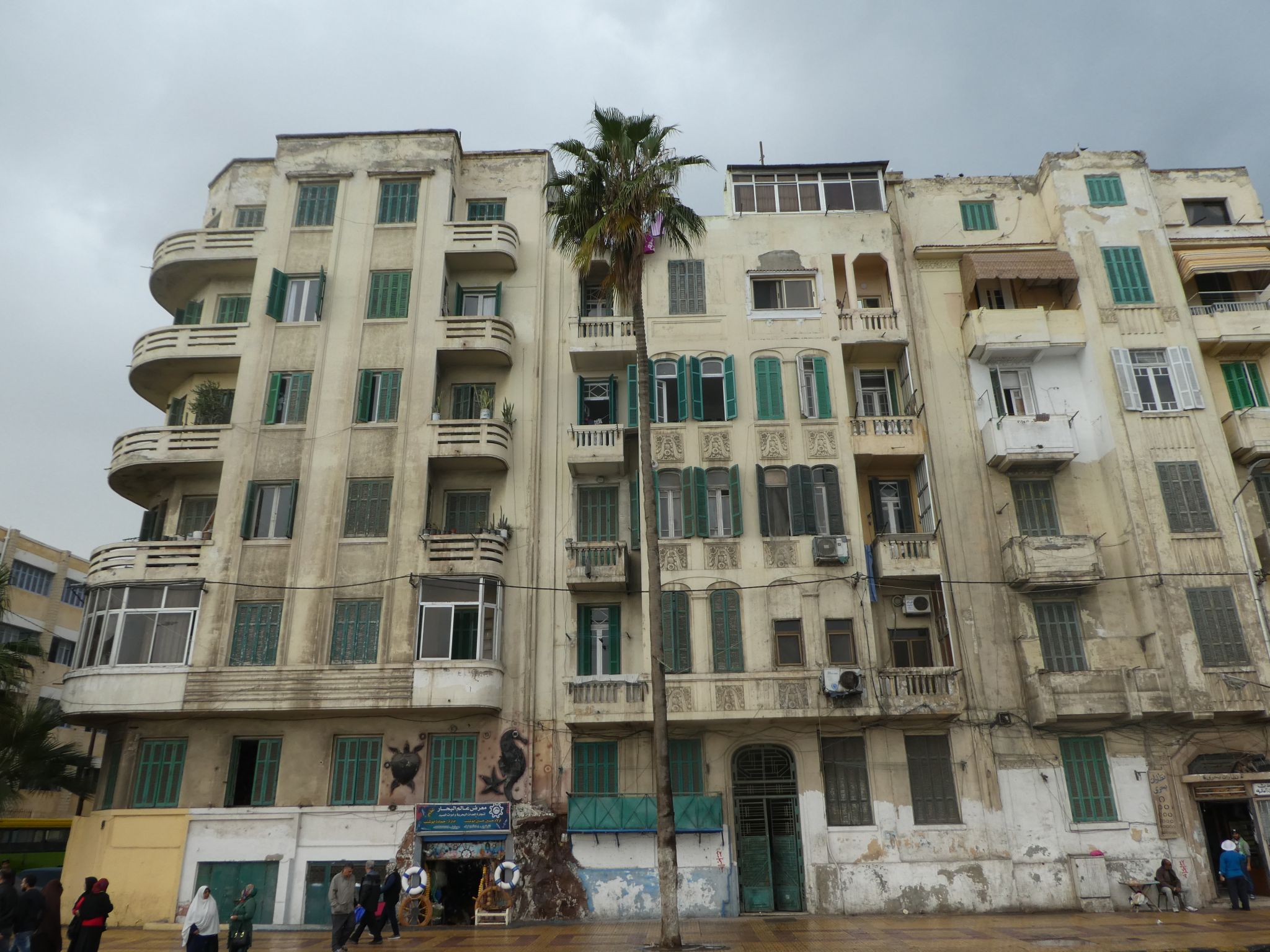 A few have been kept in good form, including the Windsor Palace Hotel, an ageing Edwardian beauty in continuous operation as a hotel since 1907, where we stayed for a few nights.  It’s open roof terrace on the waterfront still felt like a turn of the 20th century bar, and the views along the corniche were fabulous. 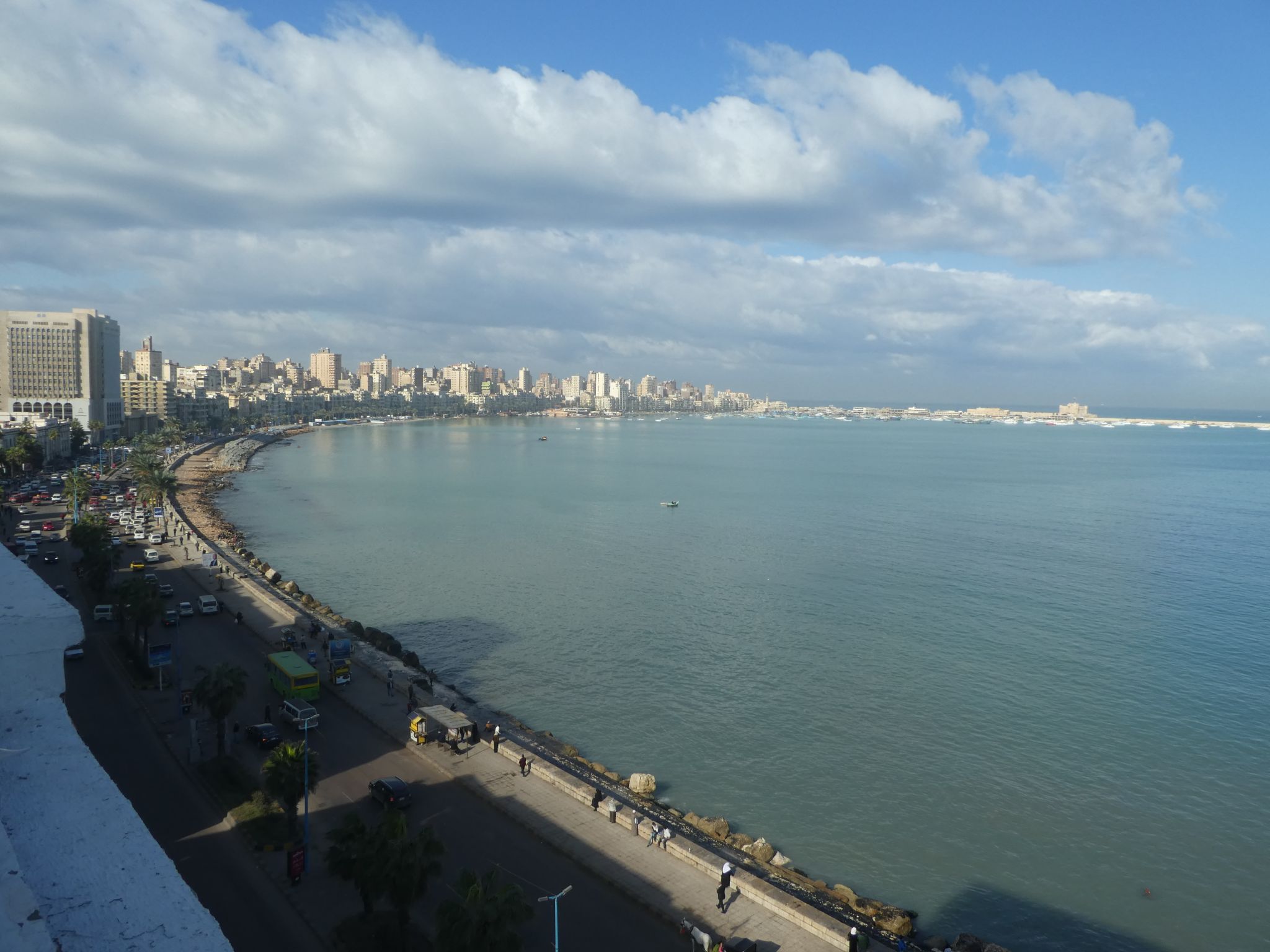 The coastal strip from Alexandria west to El Alamein is now a vast ribbon of seaside resorts and apartments for a largely domestic holiday market.  The cooler climate and calm seas are a great escape from the heat which stifles Cairo and other parts of the country in the summer.

But for us as Australians and for visitors from the UK, Germany and Italy, the drawcard is the museum and cemeteries associated with the World War II battles in the desert around El Alamein.

By mid 1942, the Axis powers had successfully occupied the north of Africa from Tunisia, across Libya and into western Egypt.  It was generally accepted that if they captured Alexandria, just 100kms further east, there would be no way to stop them continuing on to capture the Suez Canal and the oil fields of Persia and the Middle East.  This in turn would give them superiority of resources to support their European war.  Hence, El Alamein was seen as critical to the entire war effort.

The First Battle of El Alamein effectively ended in a stalemate after the opposing forces pushed each other back and forth for months, depending on which force had superiority of supply lines, intel and manpower.

The Second Battle of El Alamein, however, was an emphatic victory for the Allies.    The win was pivotal, with the Allied forces then pushing the Axis forces back, out of Egypt, across Libya and back into Tunisia before they finally capitulated in May 1943.

The Australian 9th Division and the New Zealand 2nd Division were both central to the Allies’ hard fought victory.  The Australians’ reputation for grit and determination had been cemented at the siege of Tobruk, and many of these soldiers went on to participate in the battle of El Alamein.  British Commander, General Montgomery’s chief of staff recorded “the Australians fought some of the finest German troops in well-prepared positions to a standstill, and by their actions did a great deal to win the battle of El Alamein”.

Outside is a collection of tanks, planes and other military equipment from the war.  With the battle being fought largely in uninhabited desert, much of the damaged hardware of battle was simply abandoned.  Amazingly, bits are still being recovered.  Believed to have crashed in 1942, this spitfire was only discovered in 2012 during oil company activities in the El Wadi El Jadid desert. 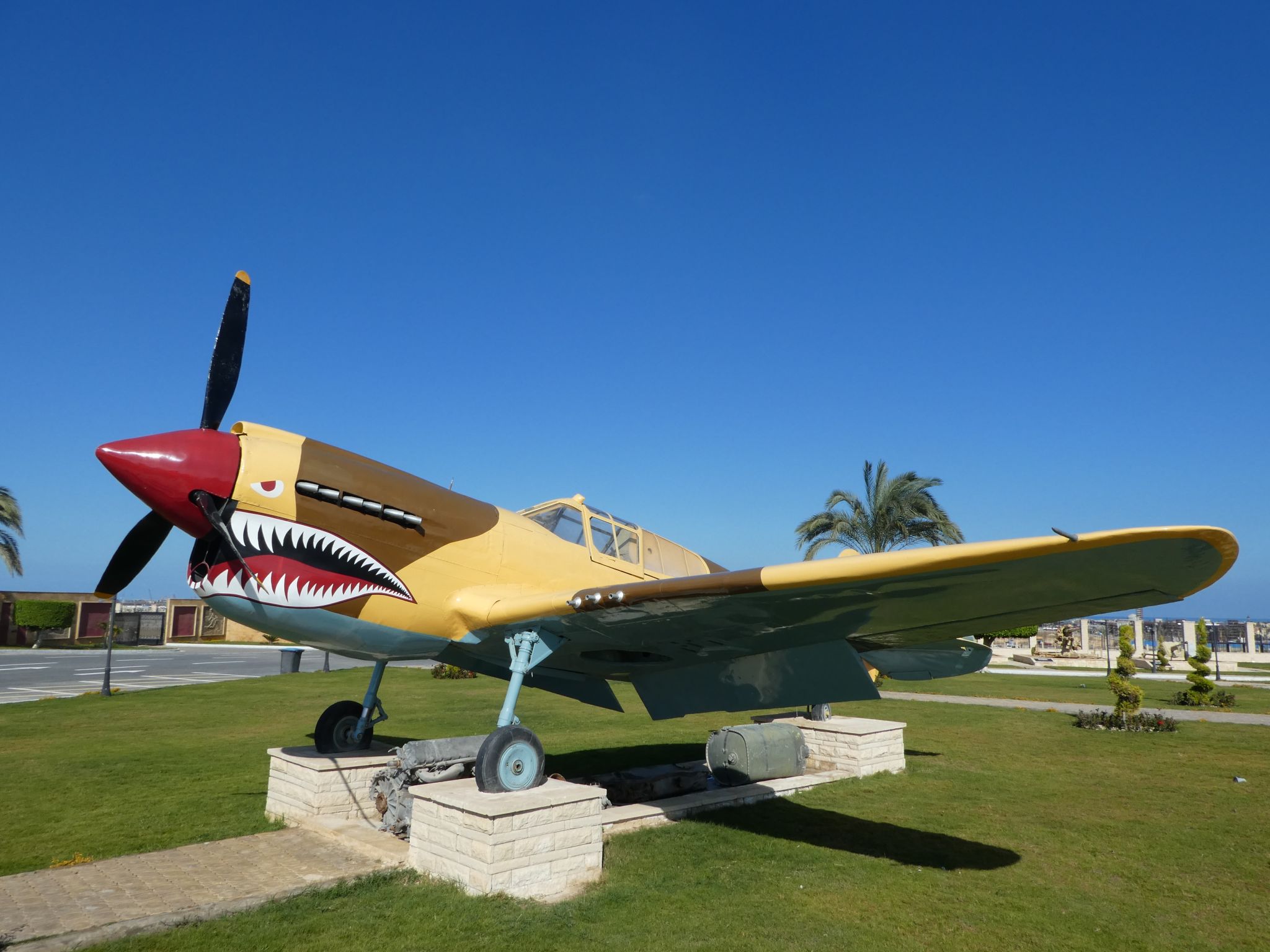 The Commonwealth War Cemetery has 7,240 tombstones honouring the Commonwealth dead from the campaigns in the Western Desert, especially the El Alamein battles.  They include Australians, New Zealanders, South Africans and others.  The cemetery is immaculately kept, with desert plants and the stark landscape providing a peaceful setting. 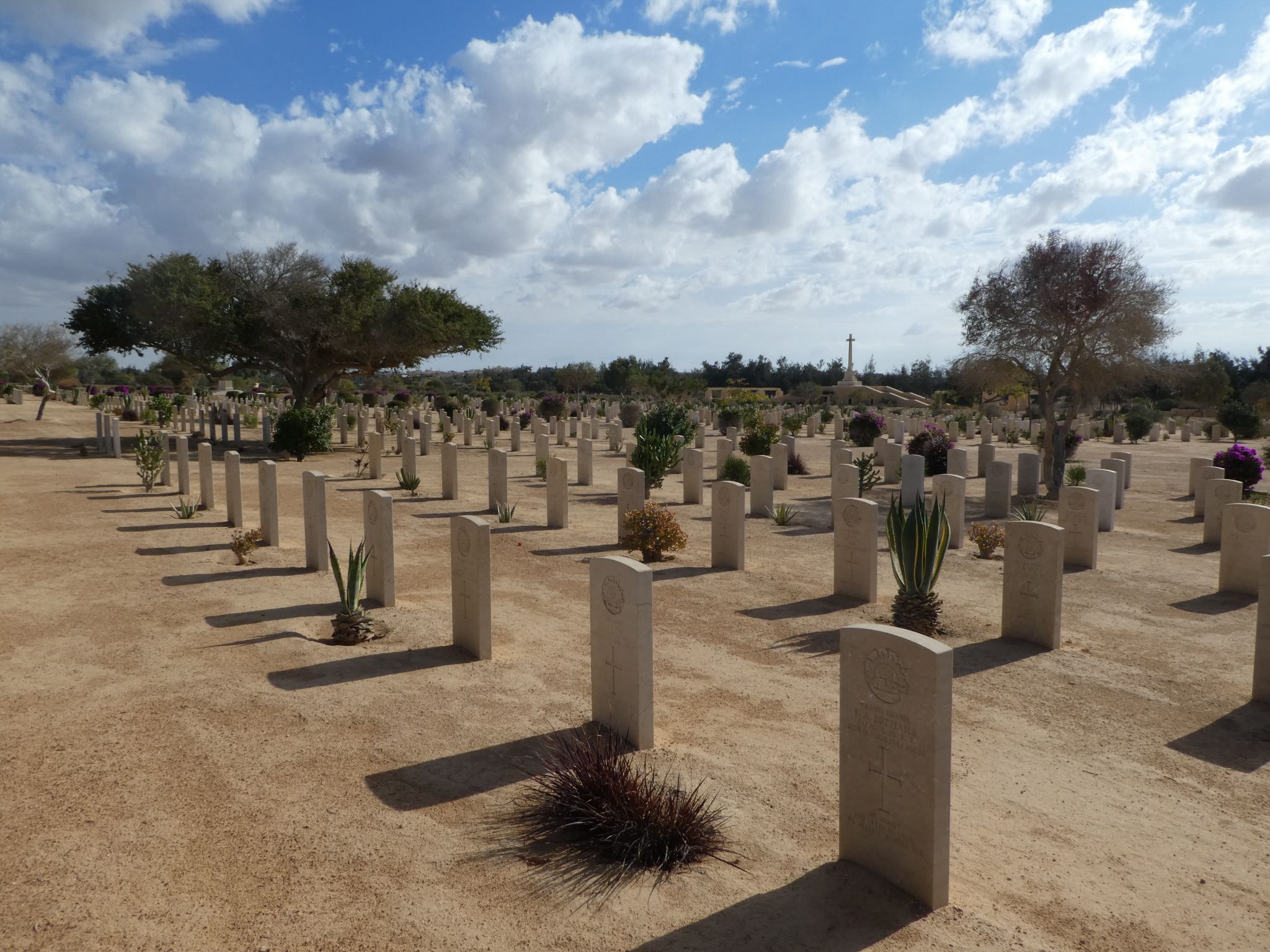 Just outside is a memorial to the Australian forces. 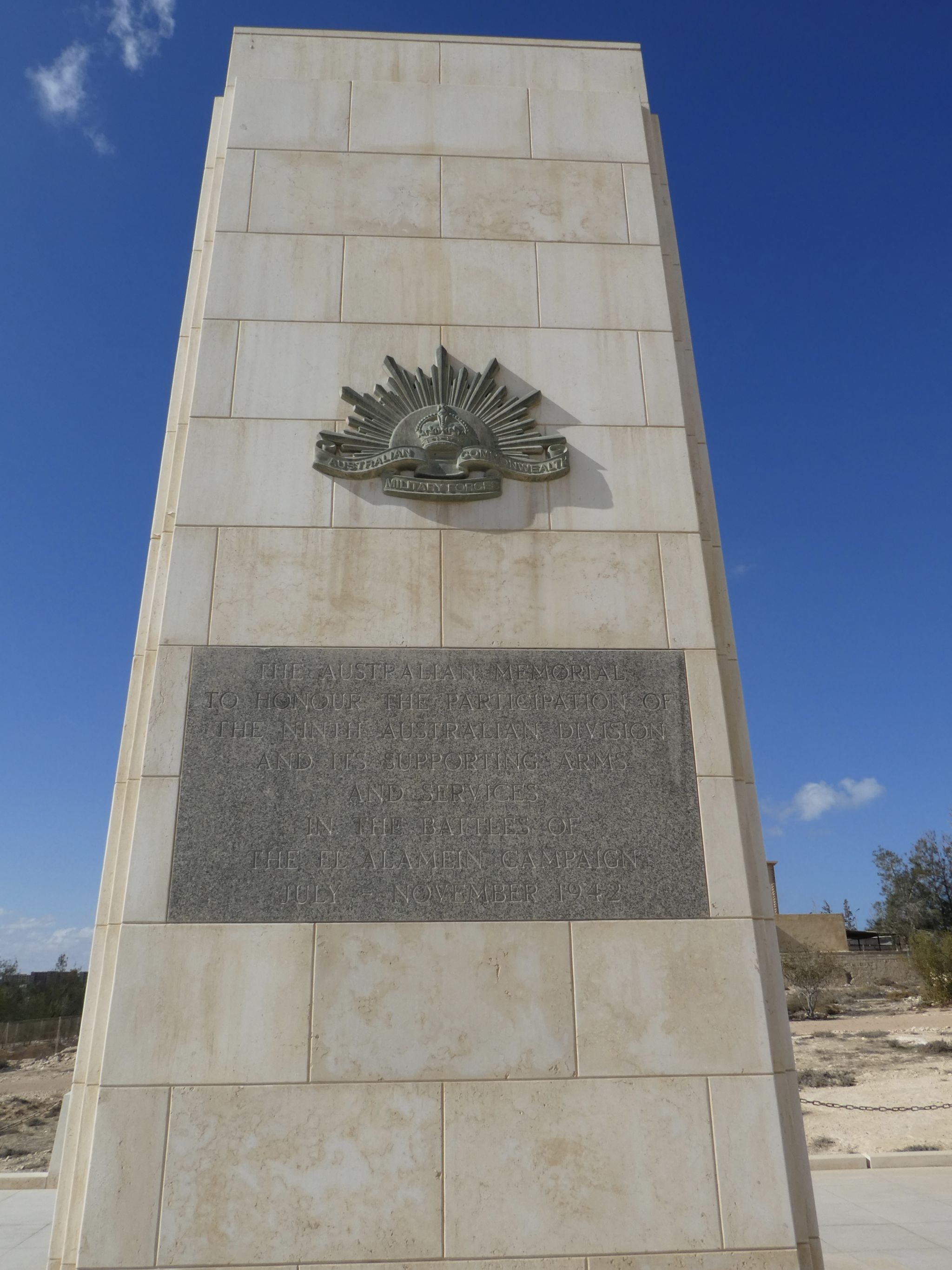 Seven kilometres from El Alamein is the German War Memorial, which resembles a sandstone fortress in the desert.  The dead are interred in groups according to regiment, which seems a little impersonal and a curious choice, that with so much land avaiable, they did not establish individual graves. 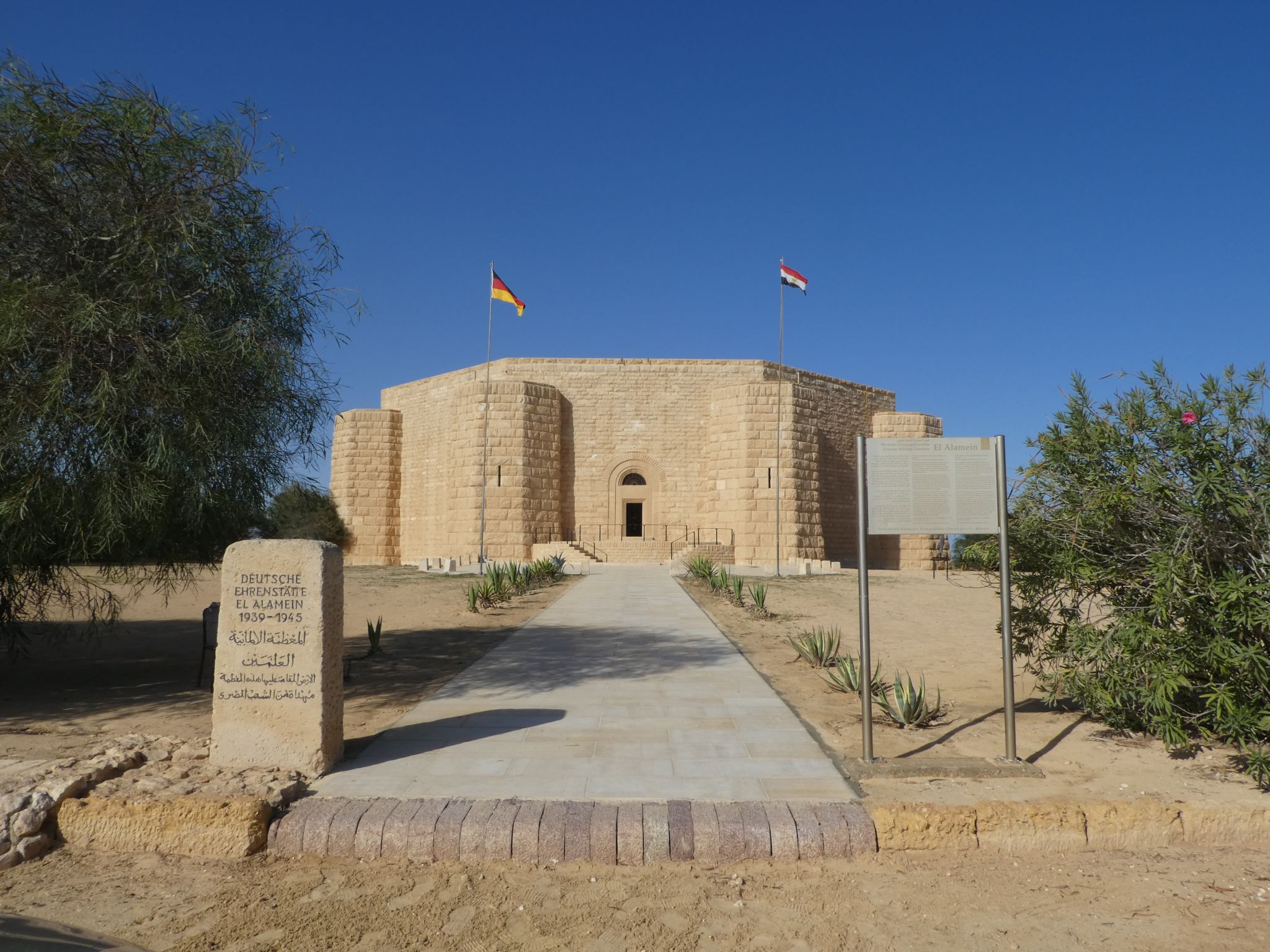 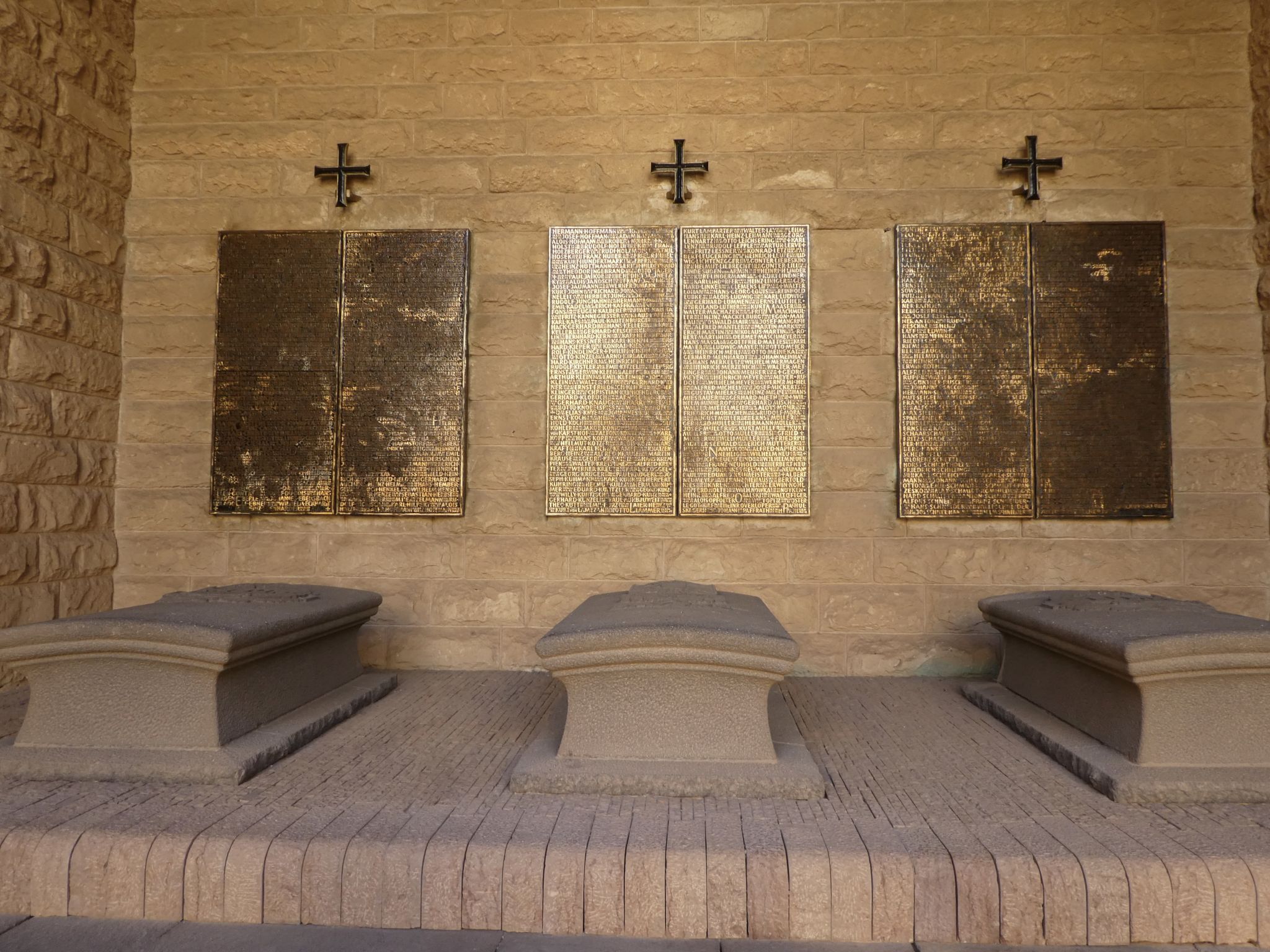 And nearby also is the Italian memorial, where the graves are individual, stacked to ceiling height like some giant archive.

Contrary to some commonly held perceptions, the Italians fought a spirited and brave campaign.  When Rommel realised he could not win, Hitler refused his request to withdraw.  His orders stated “as to your troops, you can show them no other road than that to victory or death”.  In an admittedly untenable position, it seems he favoured his own troops, ordering the Italians to defend the front line while he conducted a staged fall back by the German troops which saved many of them but left the Italians to an inevitable fate.

It is said the Italian infantry troops fought until they had no more bullets.  A memorial poignantly records ‘We were short on luck, not on bravery’. 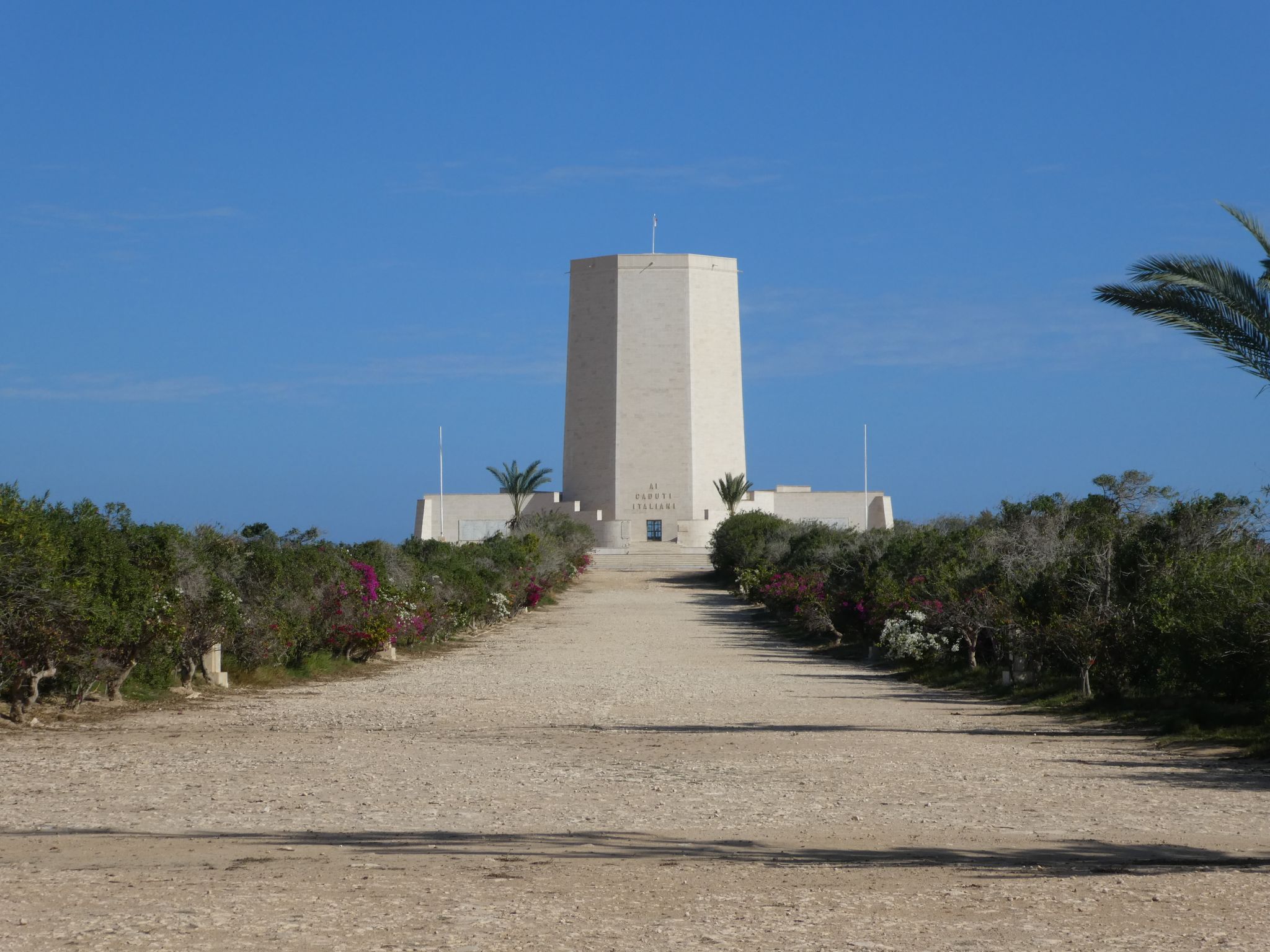 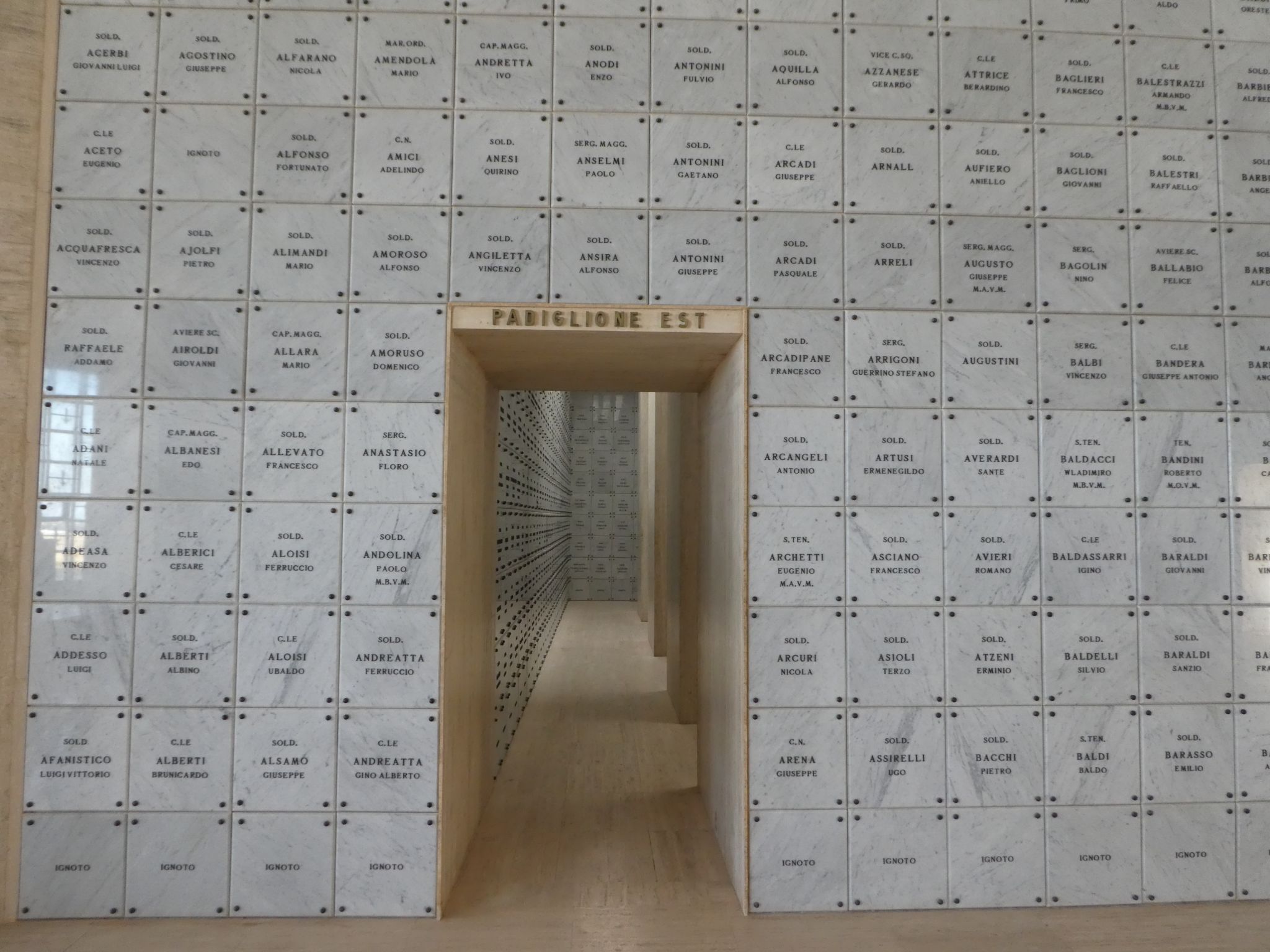 If you have an interest in war history, El Alamein alone is worth a visit to Alexandria.  We also had the enjoyment of catching up with friends from Brisbane who come to Alexandria every year to see family.  They treated us to some great home-cooked traditional Egyptian food and, thus fortified, we headed south-west to the Siwa Oasis, a spot of green in the desert near the Libyan border.