Thomas Cook brought his first group of tourists to Luxor in 1869, and so began mass tourism in Egypt.  With the greatest concentration of ancient monuments in Egypt, Luxor has been described as ‘the world’s largest outdoor museum’.  And with tourist information describing many, many sites as ‘must see’, it’s easy to overload.  More on that later.

To begin with, it’s convenient to divide the sites into east bank, west bank and out of town.

On the east bank of the Nile, four worthy sites string out along the river, with the town surrounding them on the other three sides.

Luxor Temple was built between 1390 and 1352BCE and then embellished in a second stage of building in the mid 1200sBCE.  It’s main function was for use during a festival to celebrate the annual Nile River flooding which brought fertility to the lands along the river.  Quite a bit of the temple has been lost, but there’s still some incredible stone statues and the Great Court of Ramses II with columns topped by capitals representing lotus buds. 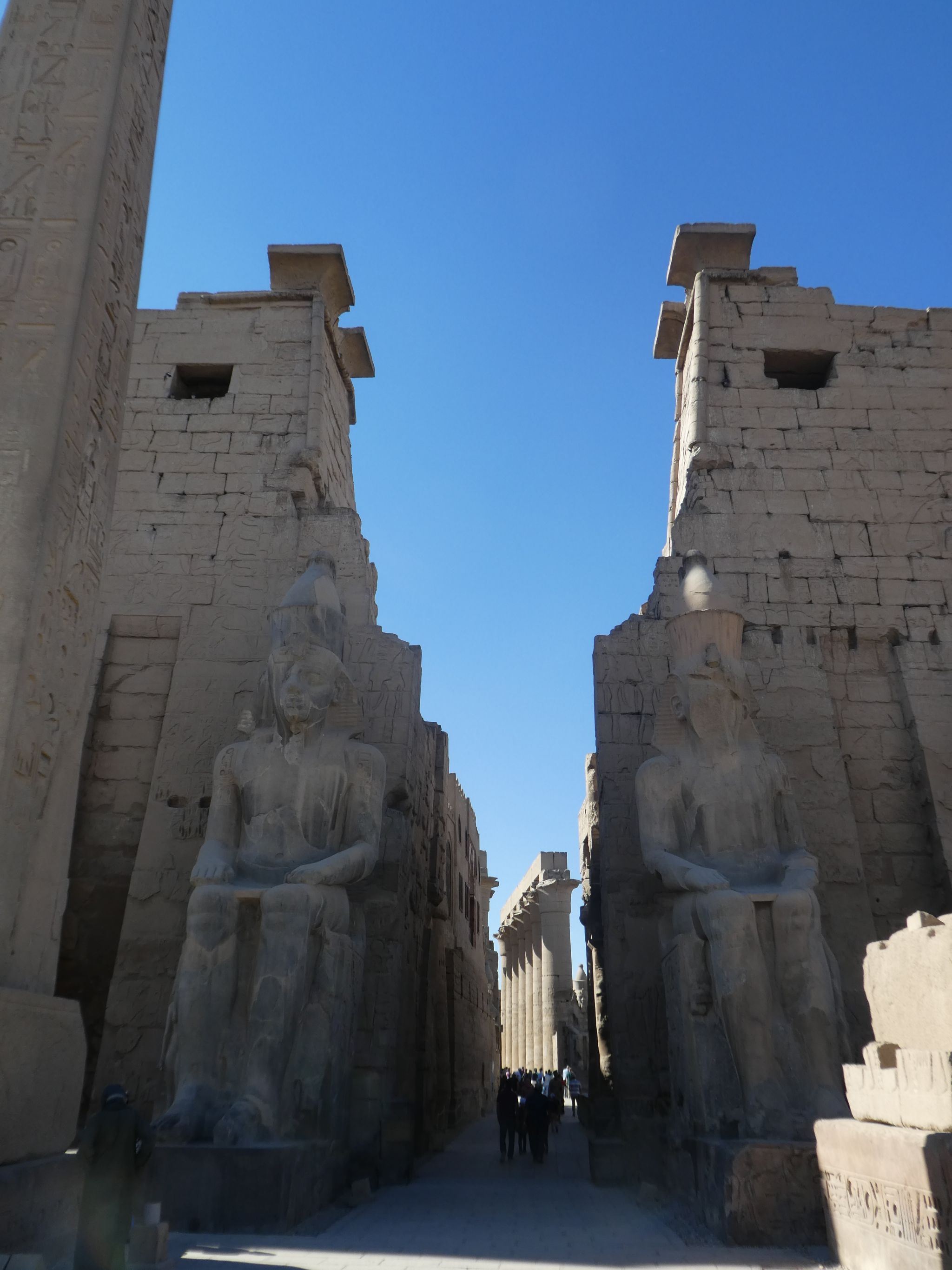 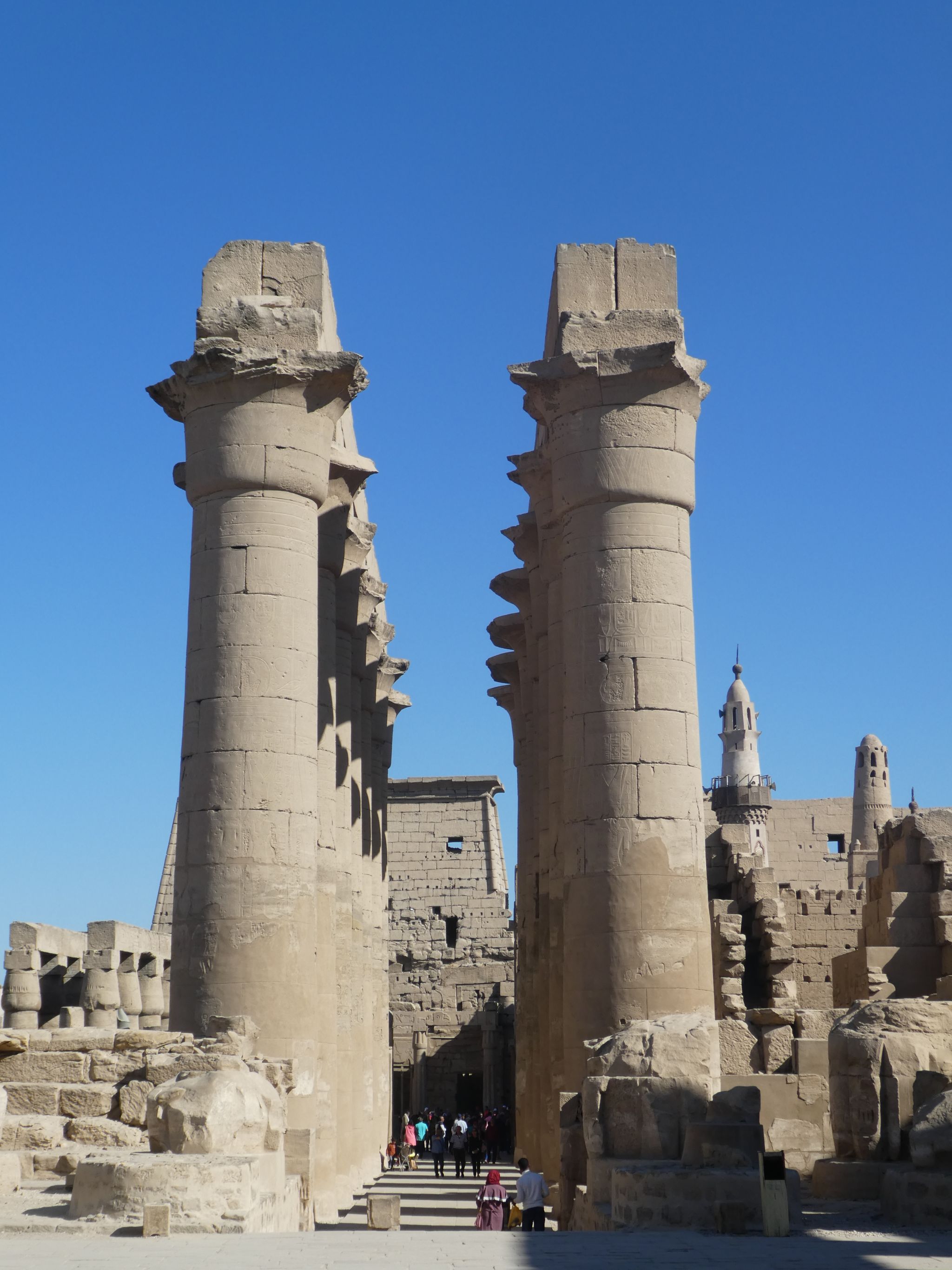 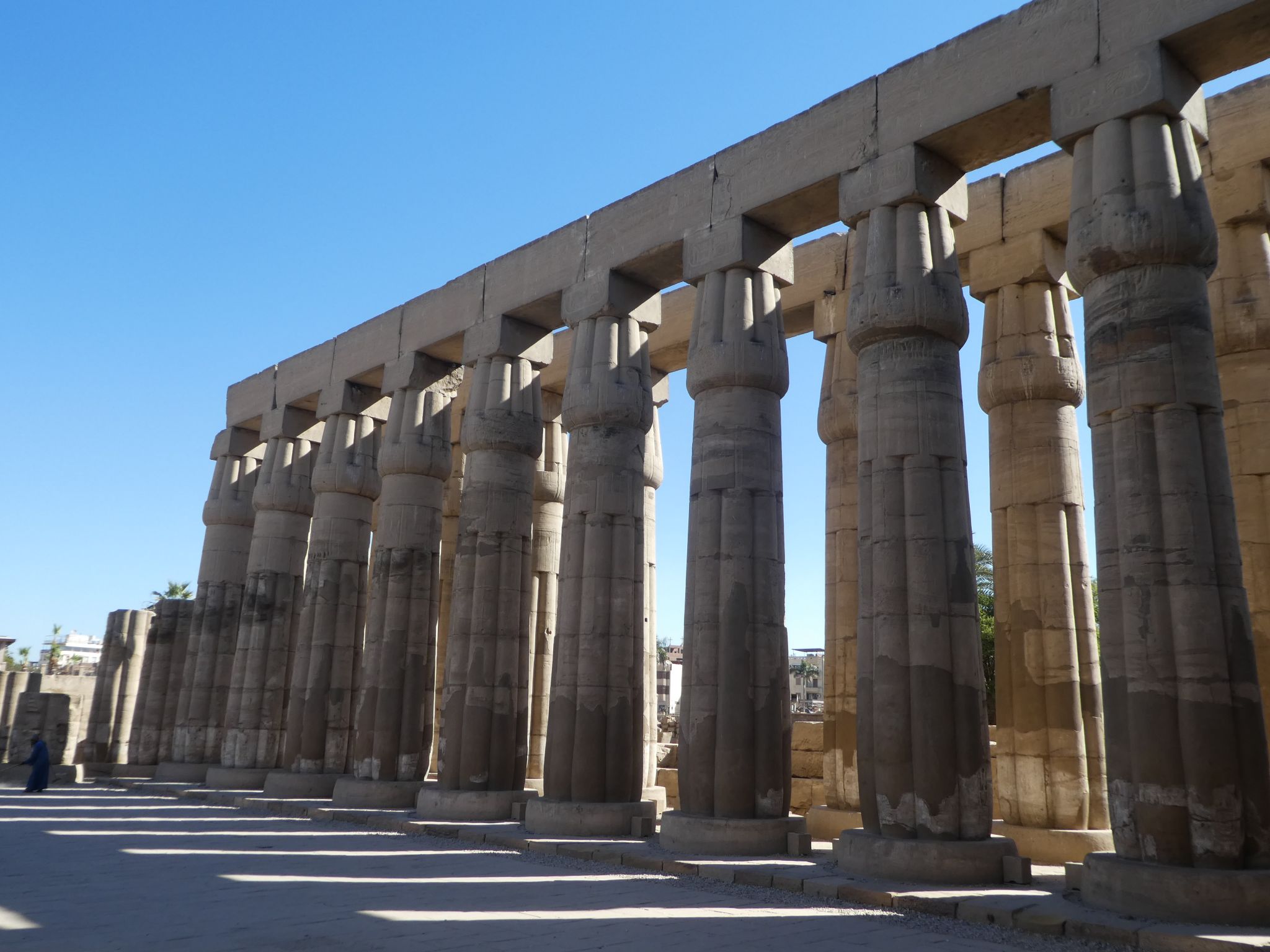 In its heyday, a three kilometre avenue lined with sphinxes linked Luxor Temple to Karnak Temple further downriver.  Many have been lost, but a massive project is underway to restore the avenue. 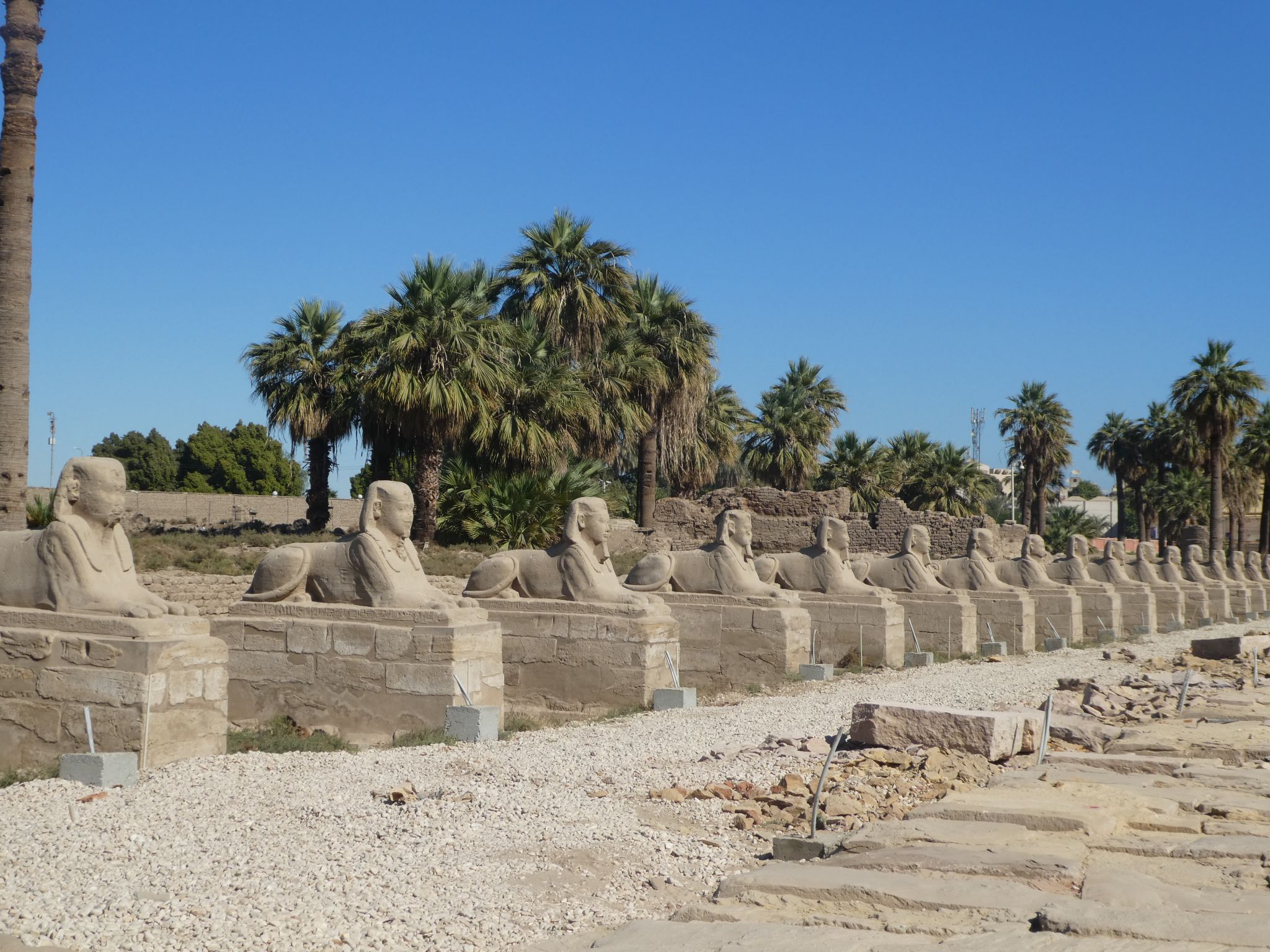 In the meantime, it’s a pleasant walk along the riverbank promenade – at least in December when it’s not too hot.

Not far from Luxor Temple is the Mummification Museum.  We expected some in-depth information about the mummification process, but unfortunately the museum doesn’t really focus on the ‘how’.  It does, however, have a well curated display of the instruments used, including some gruesome tools which we understand were inserted up the deceased’s nose, swizzled to macerate the brain, and then the resulting mush was sucked out.  Fabulous for ensuring the external appearance of the head.  Not sure about being the guy with the job of sucking the brain out though.

Our post on the Egyptian Museum in Cairo mentioned the ancient practice of mummifying animals.  There were several more examples here, including sacred cats honouring the famous Egyptian cat-goddess Bastet, and mummified ibis, baboons and rams.  The ram was particularly freakish. 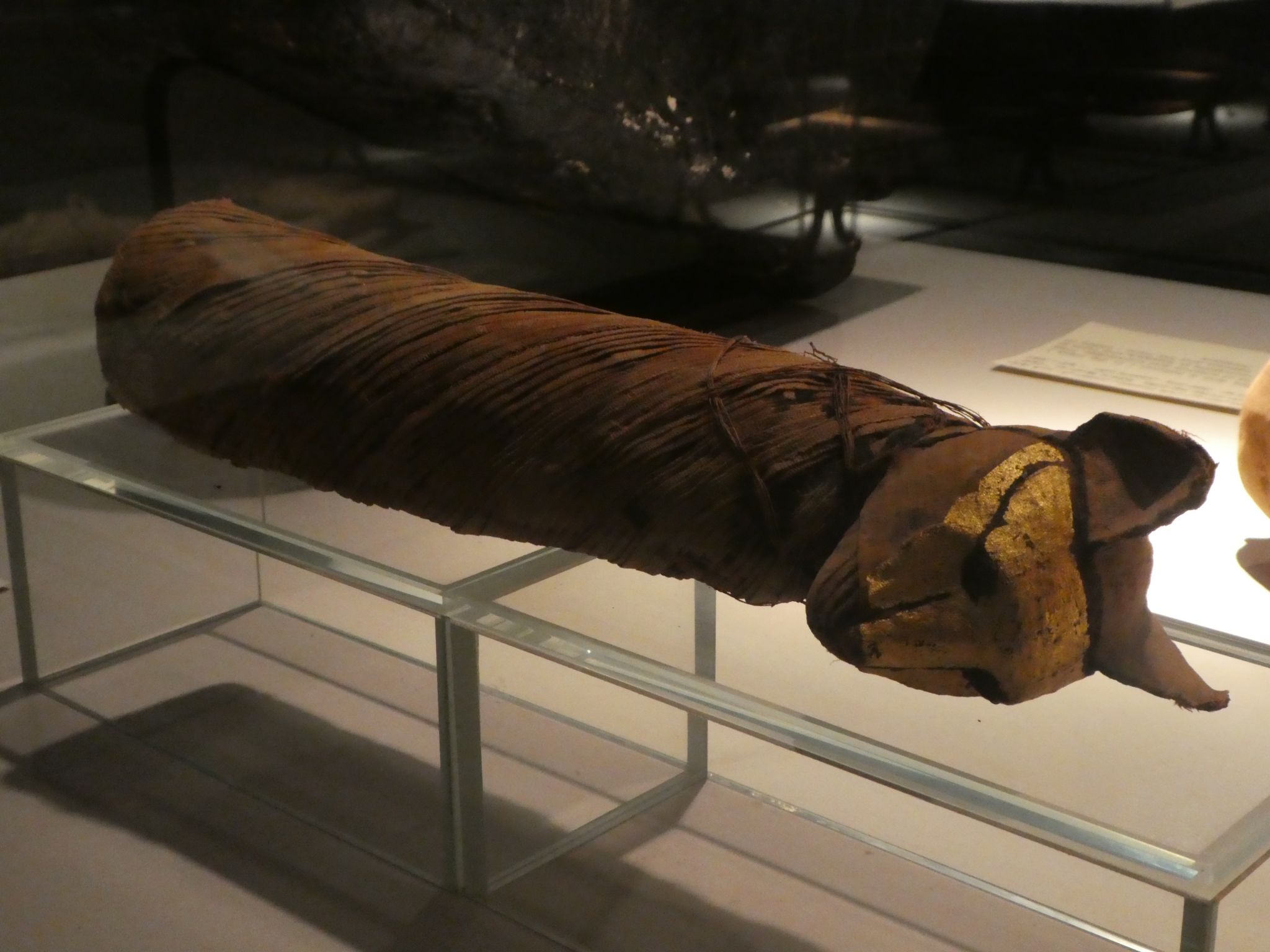 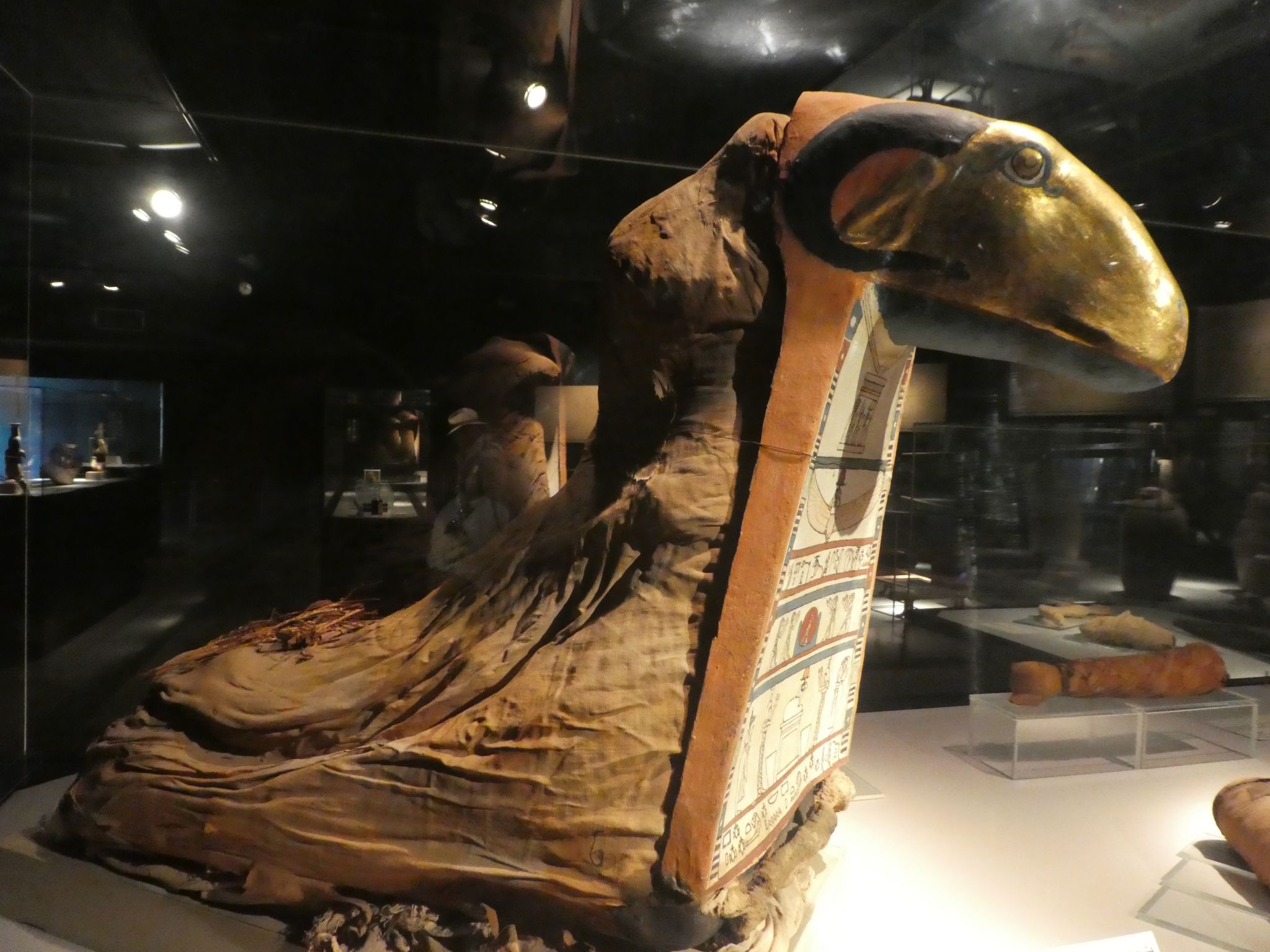 Next up is the Luxor Museum, which contains some of the treasures extracted from royal tombs in the area, including several exquisitely preserved mummies. 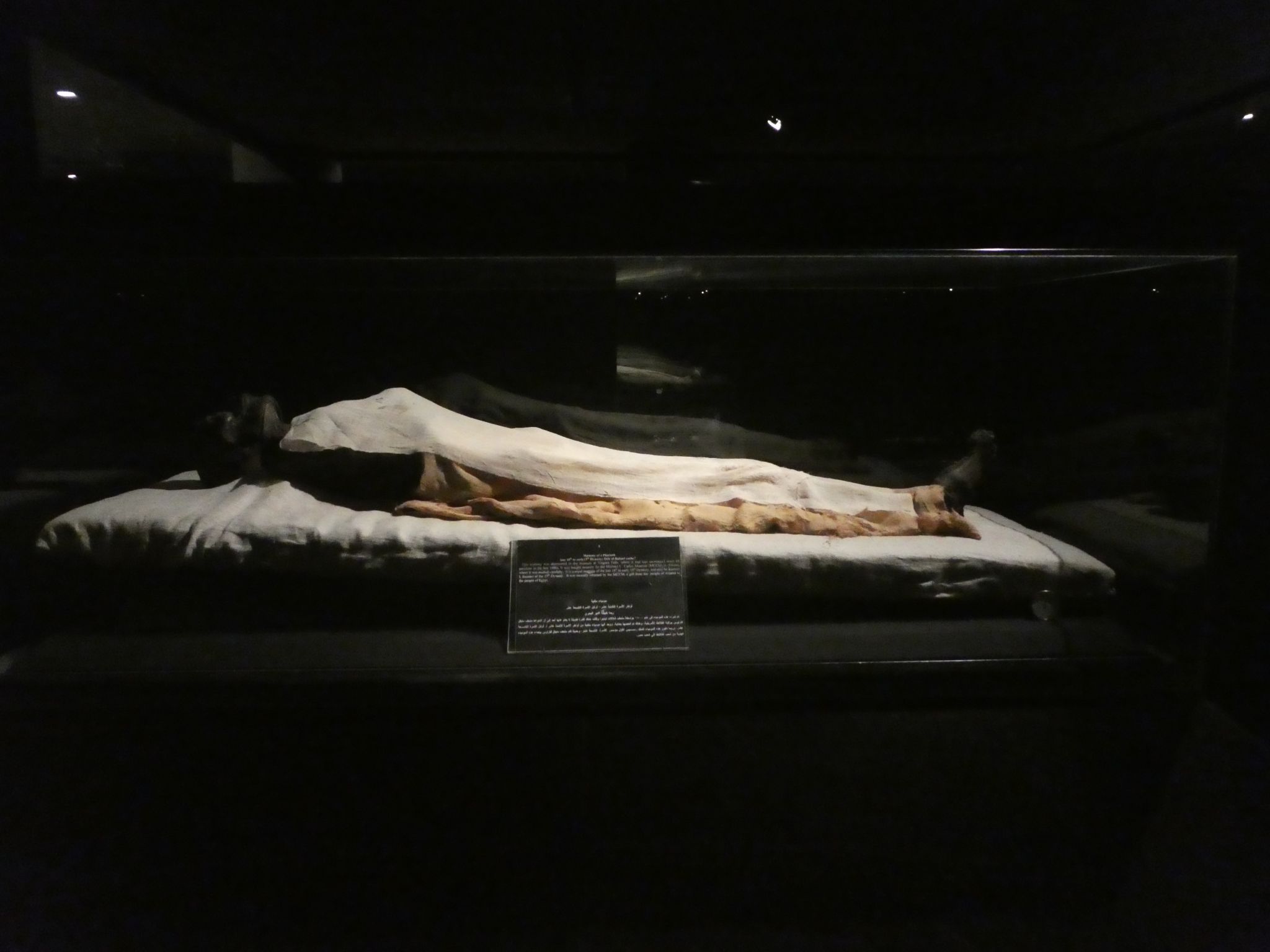 And then, the Karnak Temple.  This enormous site includes several temples, chapels, obelisks and other buildings.  In contrast to the human-headed sphinxes lining the road between the two temples, the approach from the river to Karnak Temple is lined with ram-headed sphinxes. 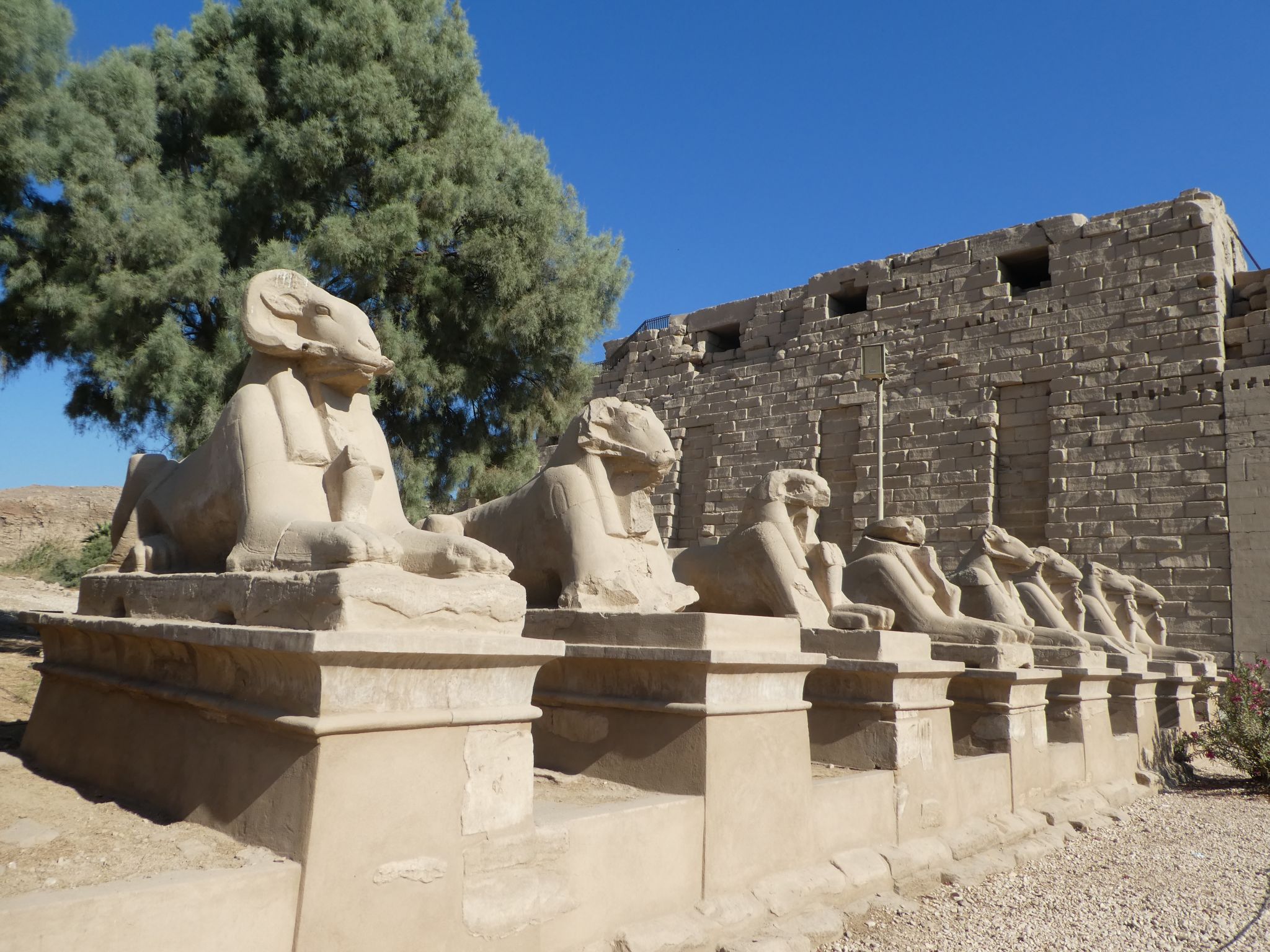 The highlight is the Amun Temple Enclosure dedicated to local god, Amun-Ra. 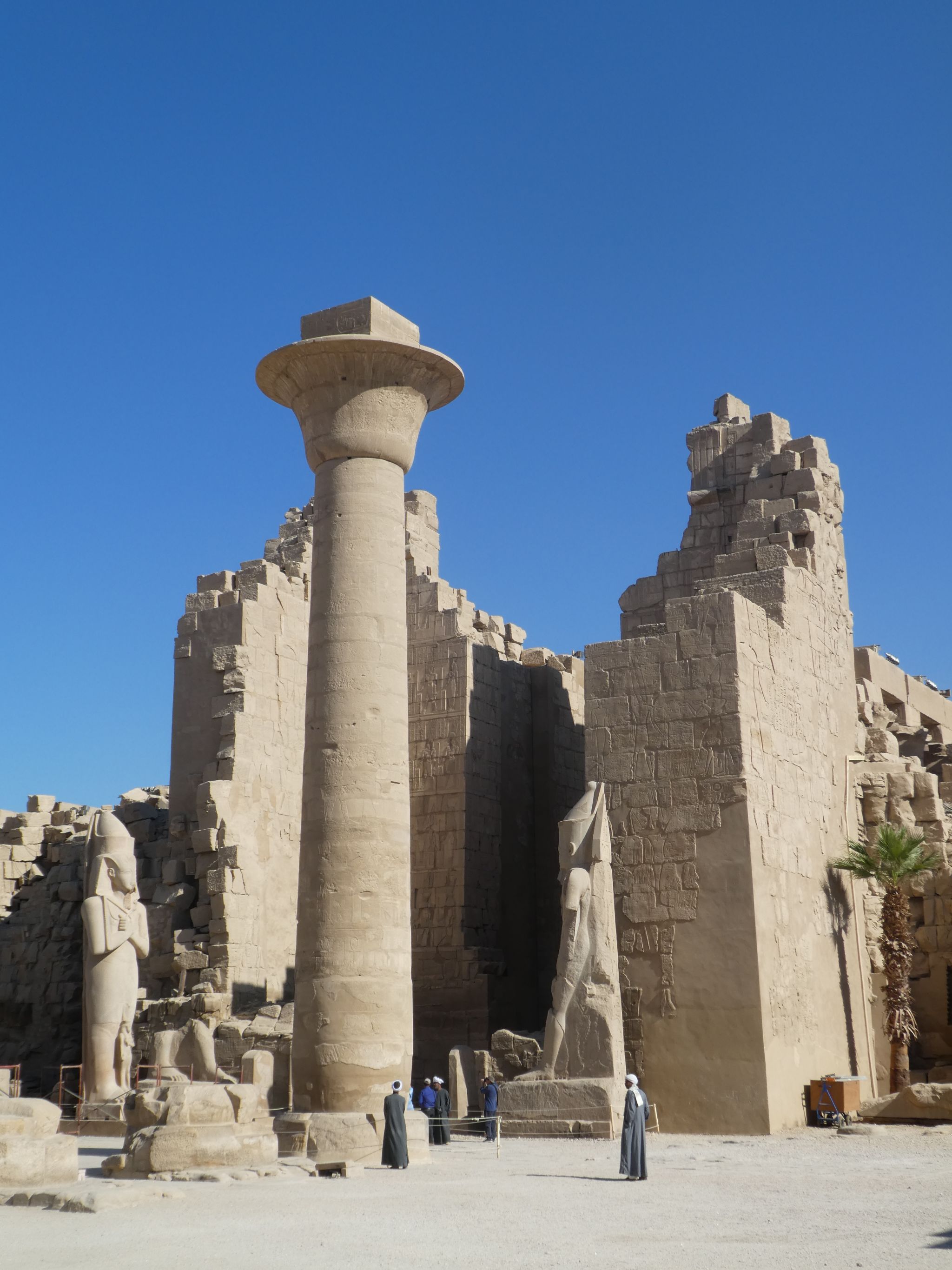 Within the enclosure, just one of the sections is the Great Hypostyle Hall.  Covering 5,500 sq metres, it comprises 134 ornately carved stone towers shaped to resemble papyrus reeds.  Most are 10 metres tall, and each section of the architrave on top weighs 70 tonne.  Imagine the mechanics of erecting this with the technology available in 1200BCE.

Each year when the Nile River flooded, the hall would fill with several feet of water, and the columns would resemble reeds in the river, celebrating the fertility brought by the flood.  Sensational. 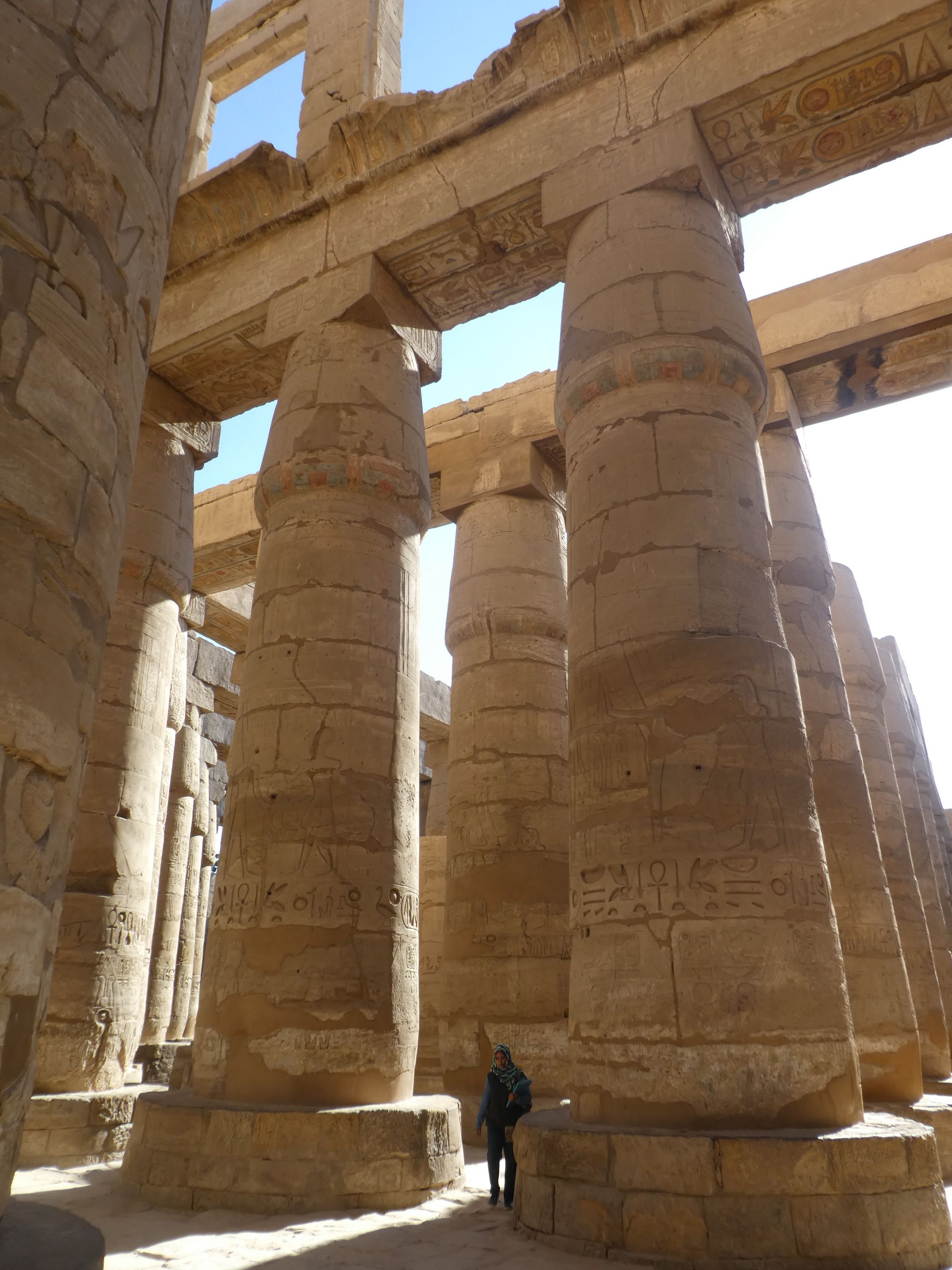 Over on the west bank the sites are spread over a large, more rural area and you need transport to get around and visit them.  A very few hardy types do this on bicycles.  Normal people hire a taxi for a day.  No prizes for guessing we took the four-wheeled option.

Like sentinels presiding over the entrance to the west bank monumental area are the aptly named Collossi of Memnon.  Each one stands about 17 metres high, weighs more than 700 tonnes and was carved from a single piece of quartz.

The passage of time has, however, taken its toll. 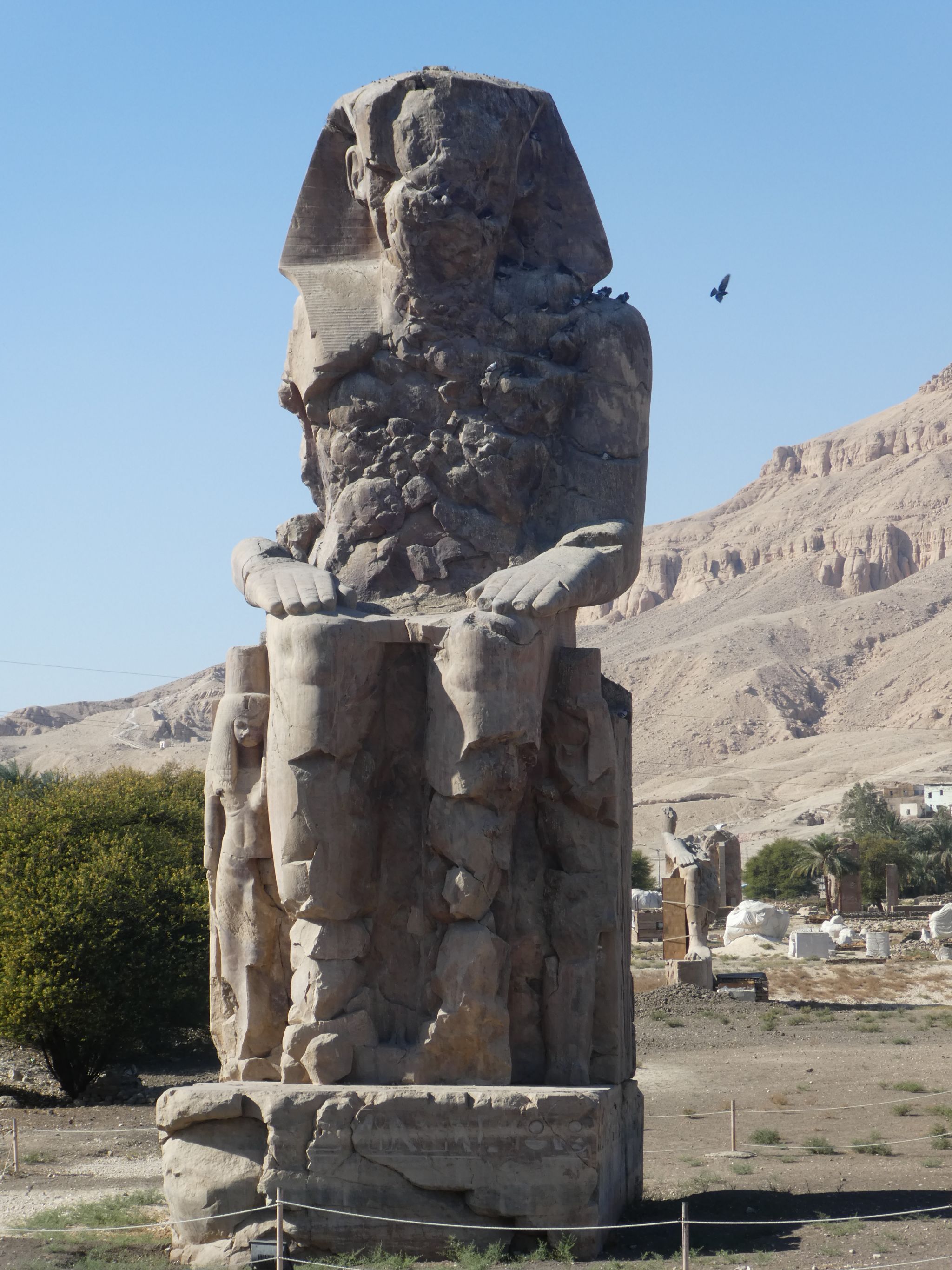 The Valley of the Kings is justly famous as a section of hills pockmarked with royal tombs, including the once-elusive tomb of Tutankhamen.  Several of the tombs have incredibly detailed, still vivid decoration. 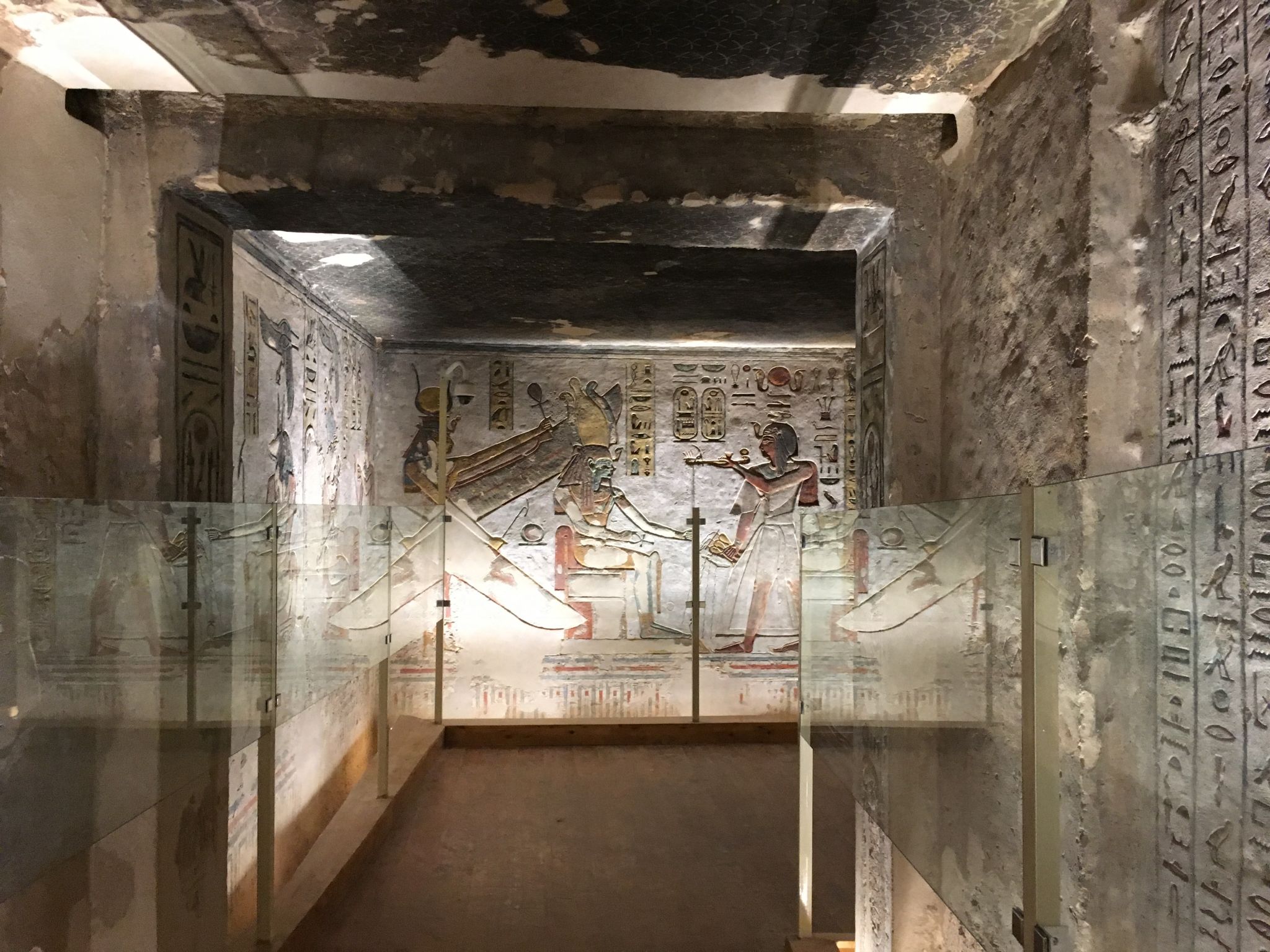 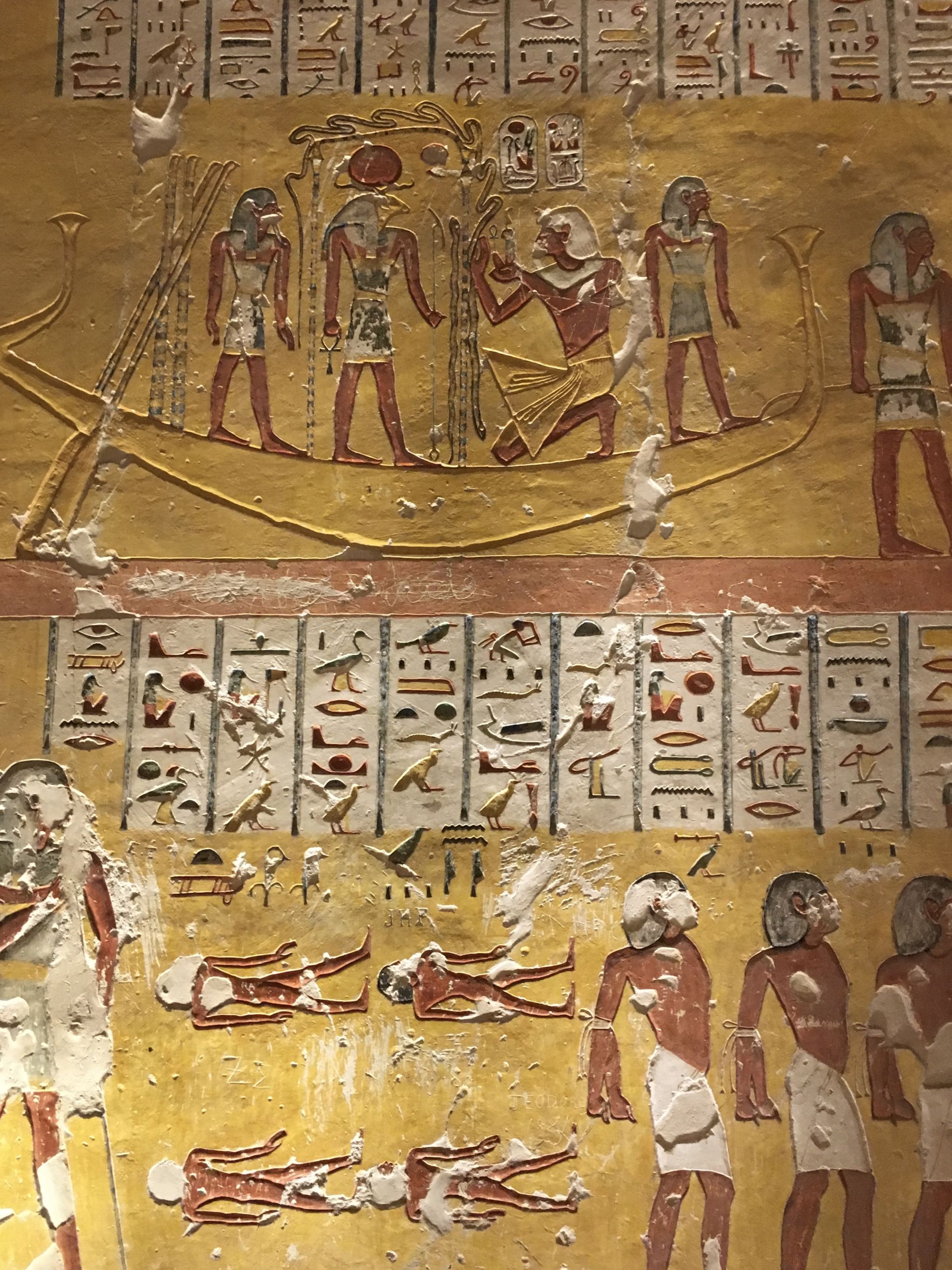 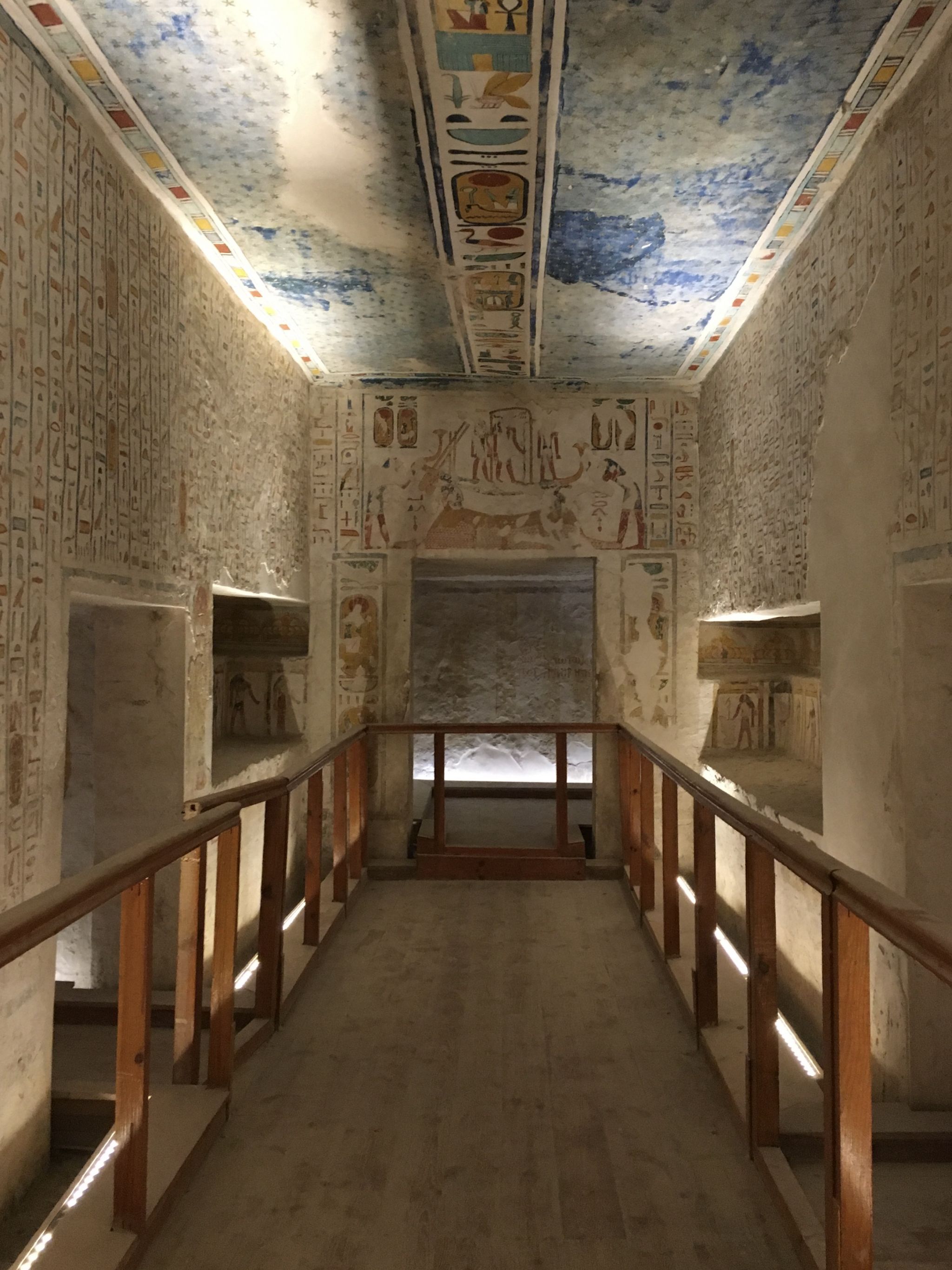 You can actually get a better perspective on Tutankhamen’s tomb by visiting Howard Carter’s house.  Curiously, few people seem to include this on their rounds, but it’s very interesting.  The house has been preserved with furniture, photographs and other items from Carter’s years living there, and in the back yard is a replica of the inner chamber of Tutankhamen’s tomb with explanations of the work which led to its discovery and the treasures found there.

From there we went to the magnificent mortuary temple of Hapshetsut.  As it’s not a tomb, it isn’t buried from sight like the tomb complexes in the Valley. 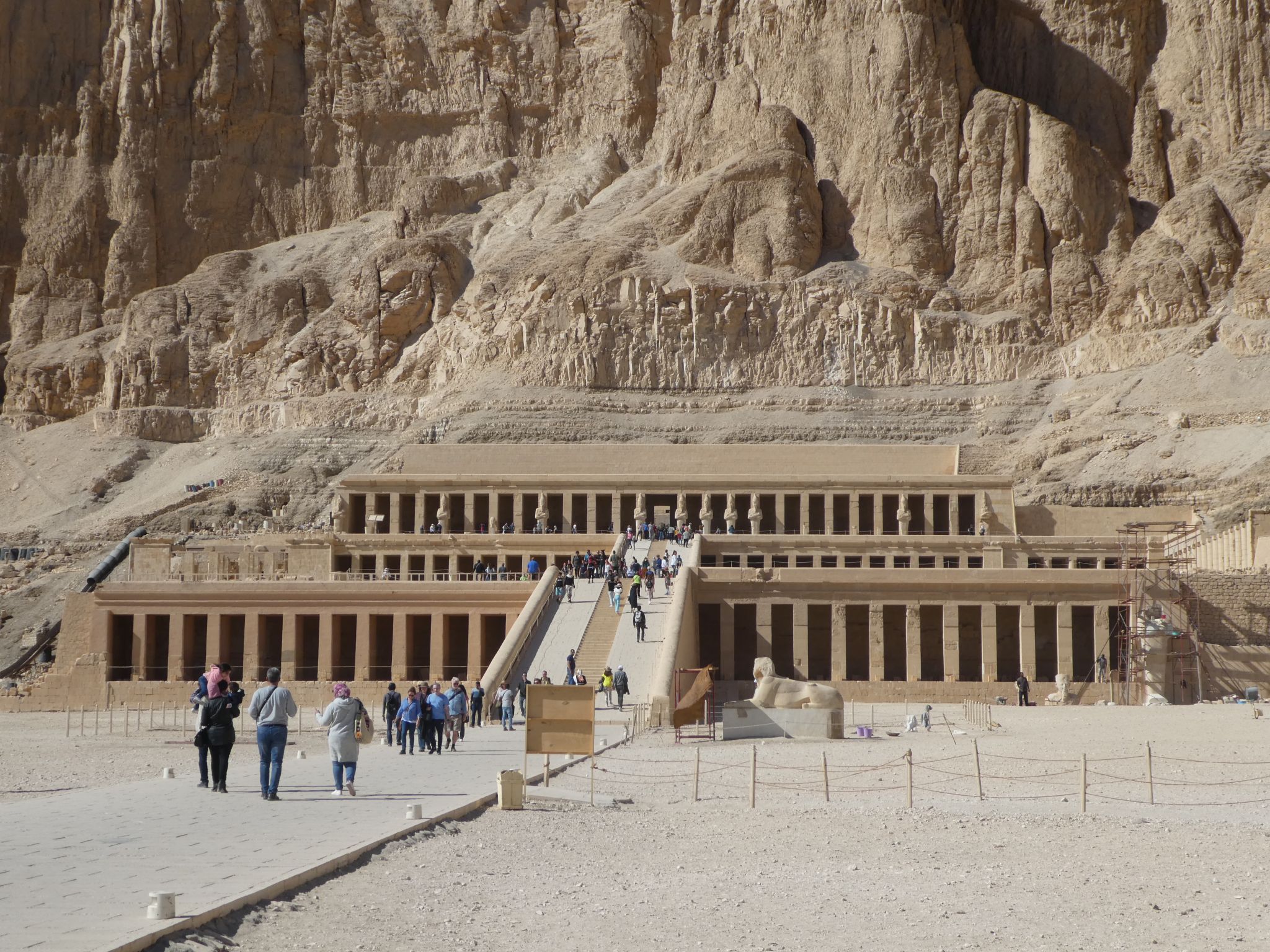 Similarly, the mortuary temple of Ramesses III at Medinat Habu rises impressively in plain sight.  It is considered the best preserved Theban site in the area. 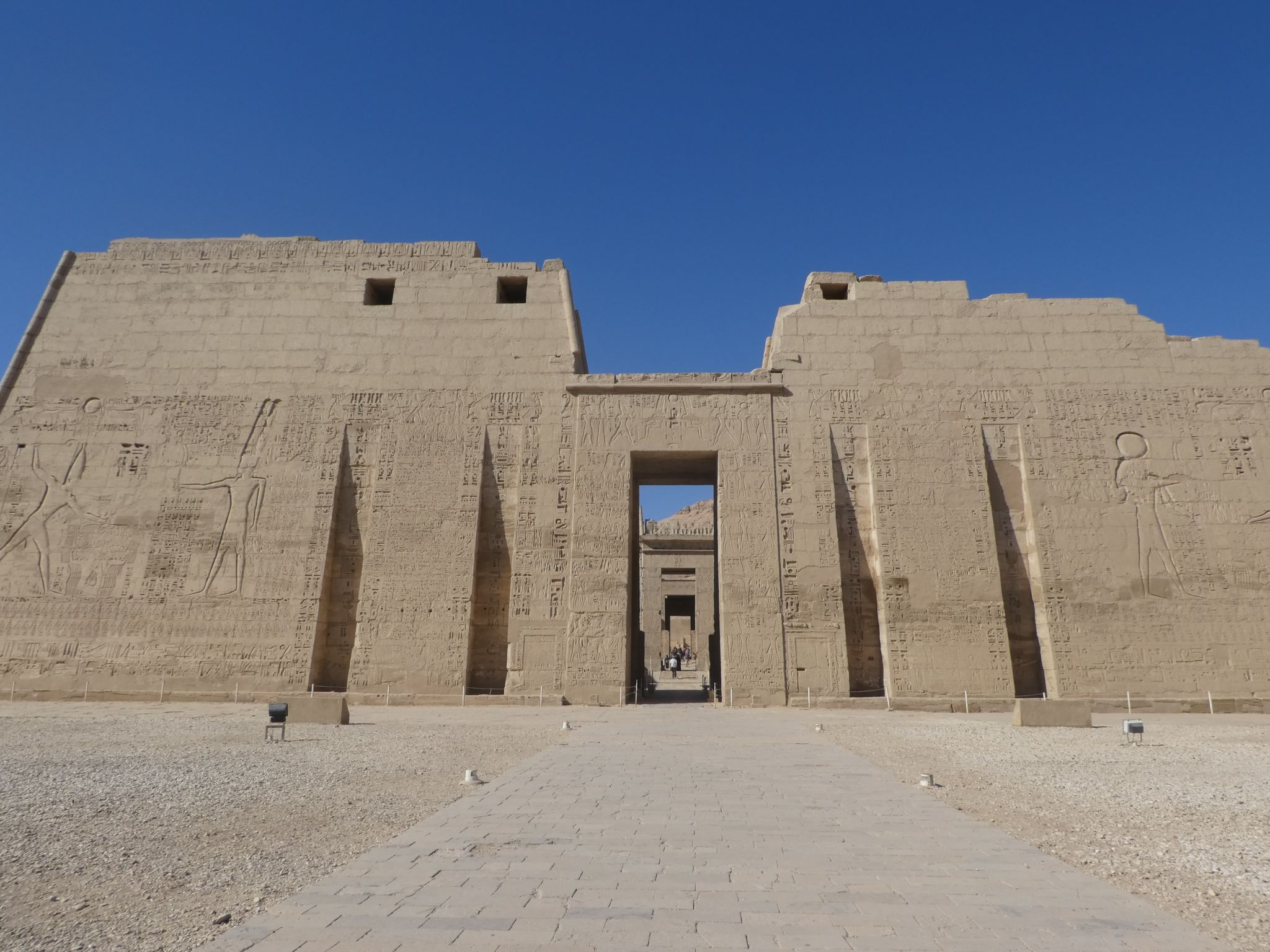 John was getting rather bored with ‘piles of rocks’ by this stage, so we finished off our jaunt around the west bank with a quick visit to the Valley of the Queens, where 75 queens and a swag of other royal family members are entombed.   Not as famous of the Valley of the Kings, and virtually deserted when we visited, it nonetheless has some fairly snazzy tombs. 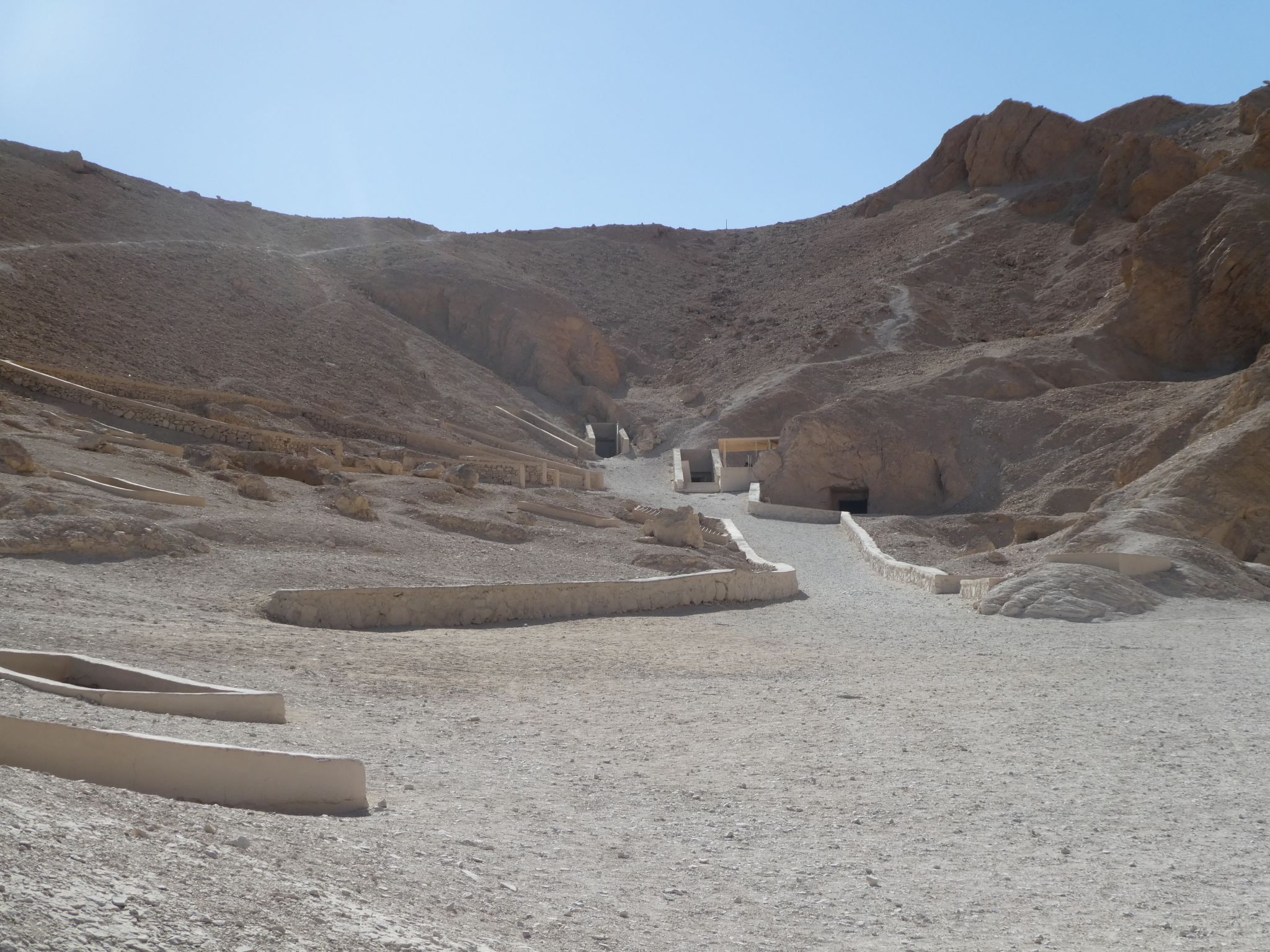 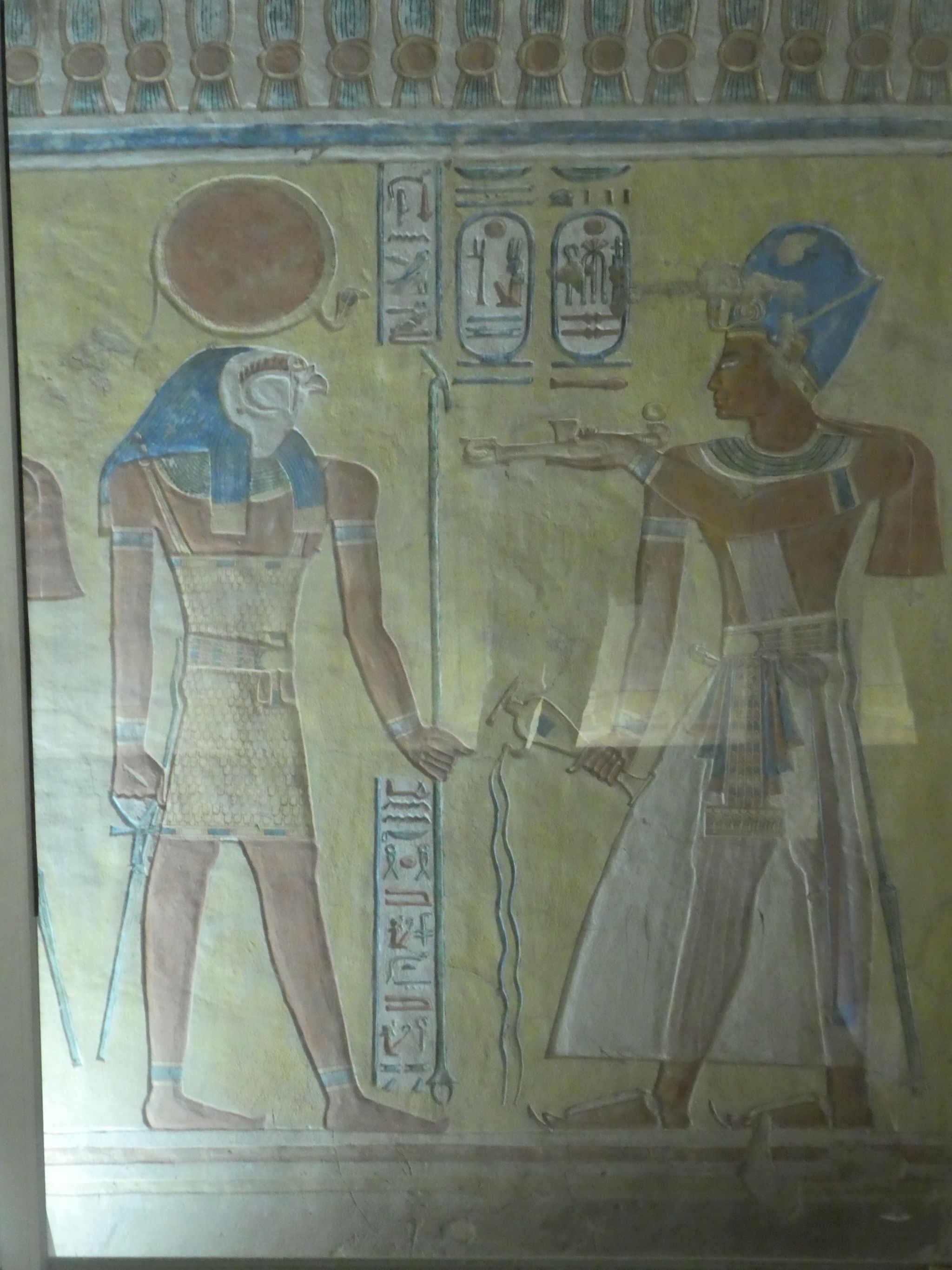 Ok, we will be honest.  Unless you are an ancient Egypt enthusiast, visiting the east bank and west bank sites is probably going to satisfy your appetite for this kind of thing.  But if you want to see some really cool stuff – or you are unwittingly compelled to do so because you delegate the planning to your travel companion – there are two excellent sites which can be done in a (very) long day trip from Luxor.

According to ancient legend, the god Osiris was murdered by his brother Set, who coveted Osiris’ wife, Isis.  Who incidentally was also their sister.  He cut Osiris’ body into 14 pieces and threw them to different parts of Egypt.  Isis was gifted a pair of wings by a sympathetic god, and flew the length and breadth of the country collecting her husband’s remains.  She bound Osiris back together mummy-style, and then by some form of magic, became pregnant to him.  The result was Horus, a god with the body of a man and the head of a falcon.   Possibly a lesson against incestuous necrophilia.

There are lots of temples to Osiris in Egypt, but Abydos was especially important because this, according to the legends, is where his head was found, and where the conception of Horus took place.

The major temple in the complex is the Temple of Seti II.  The exterior is in very good condition and the shrines inside are completely covered in carvings, many still beautiful.  Active restoration work is ongoing in a process which surely will take decades. 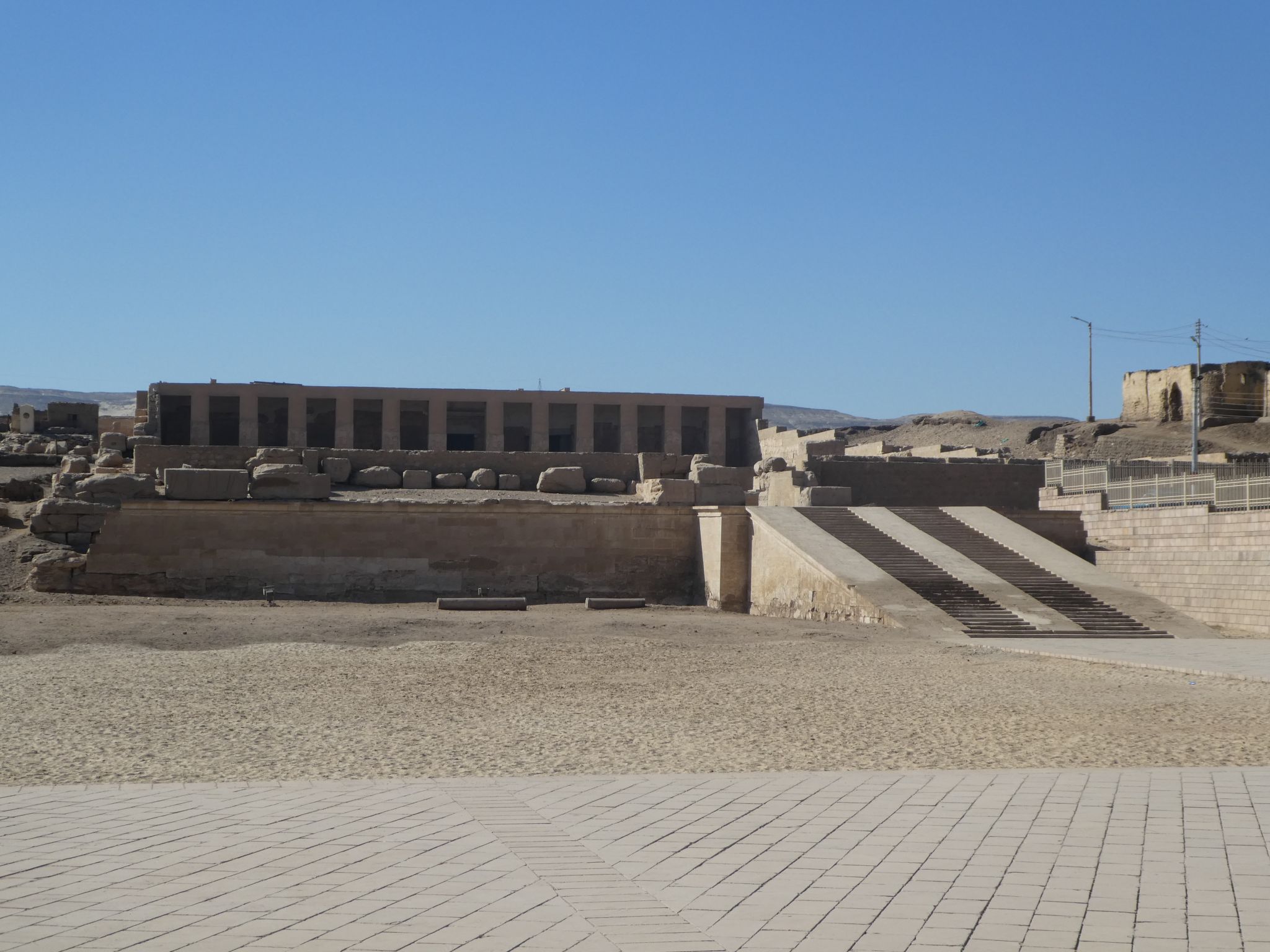 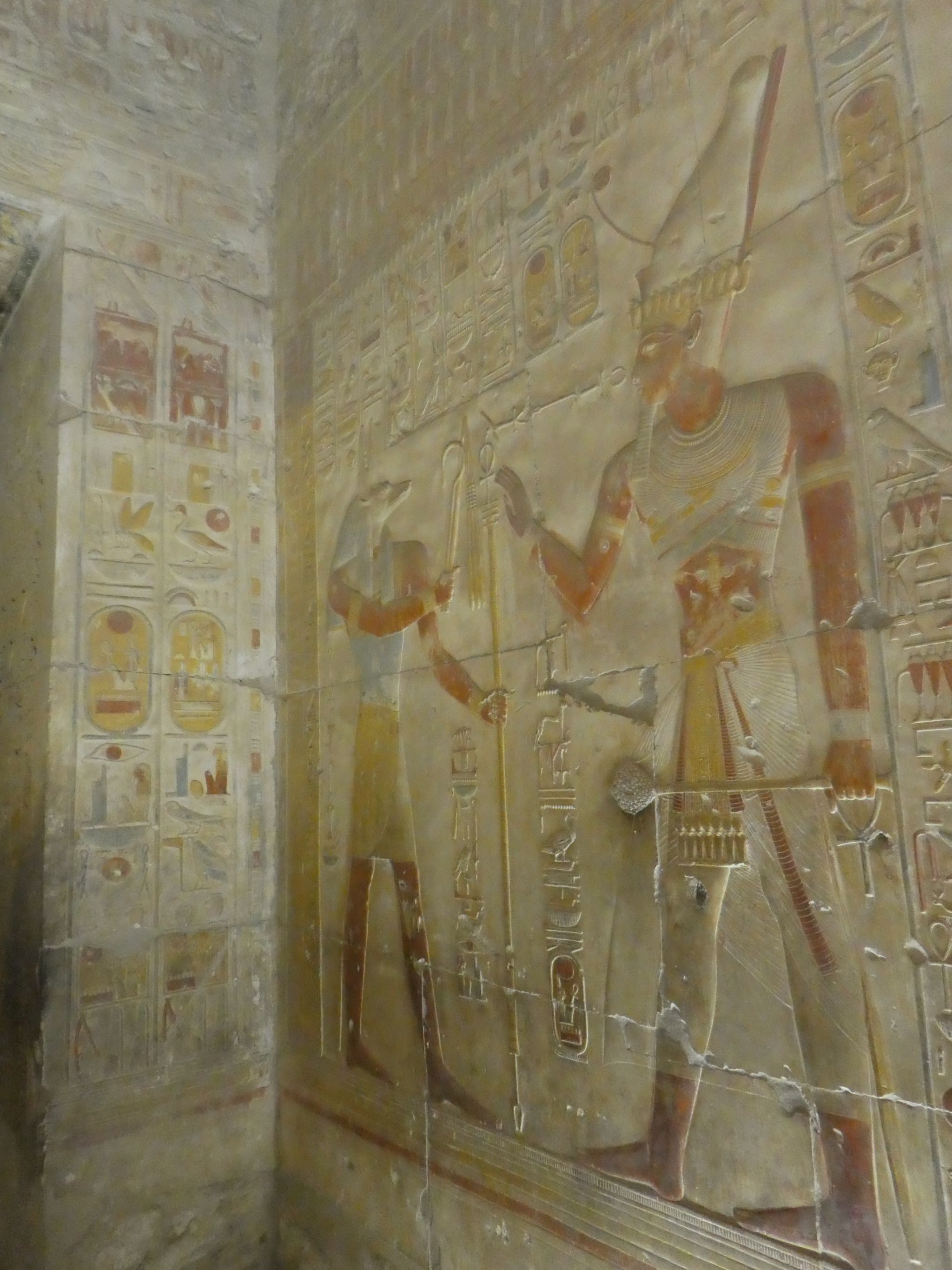 The drama of Osiris’ life and death is depicted in carvings on the temple walls, including a panel showing the conception of Horus, which leaves little to the imagination despite being disfigured by Coptic Christians centuries later. 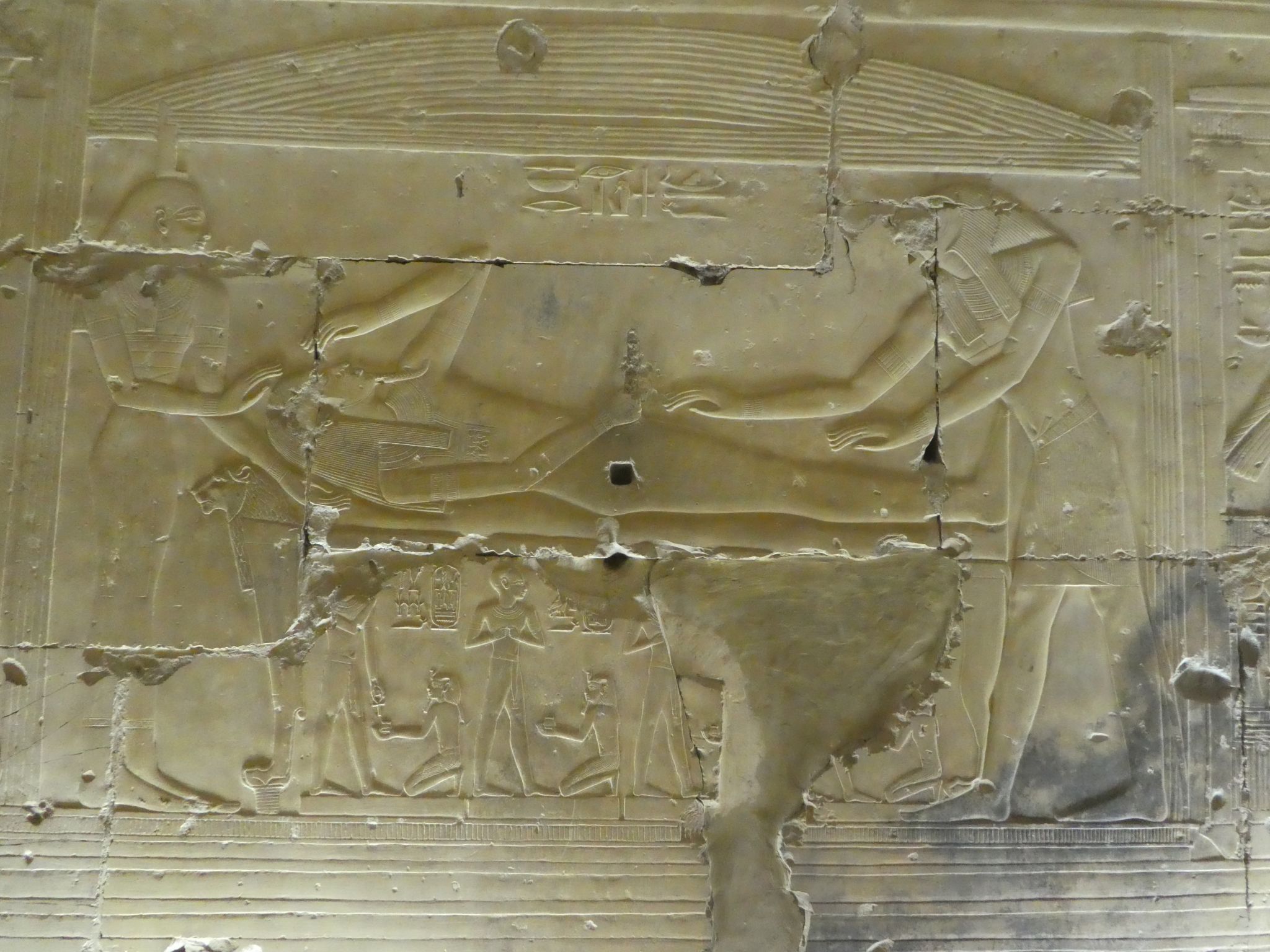 The Temple of Hathor at Dendara is said to be ‘one of the iconic buildings of ancient Egypt’  because it is so substantially intact, and the interior is filled with still-detailed decoration. 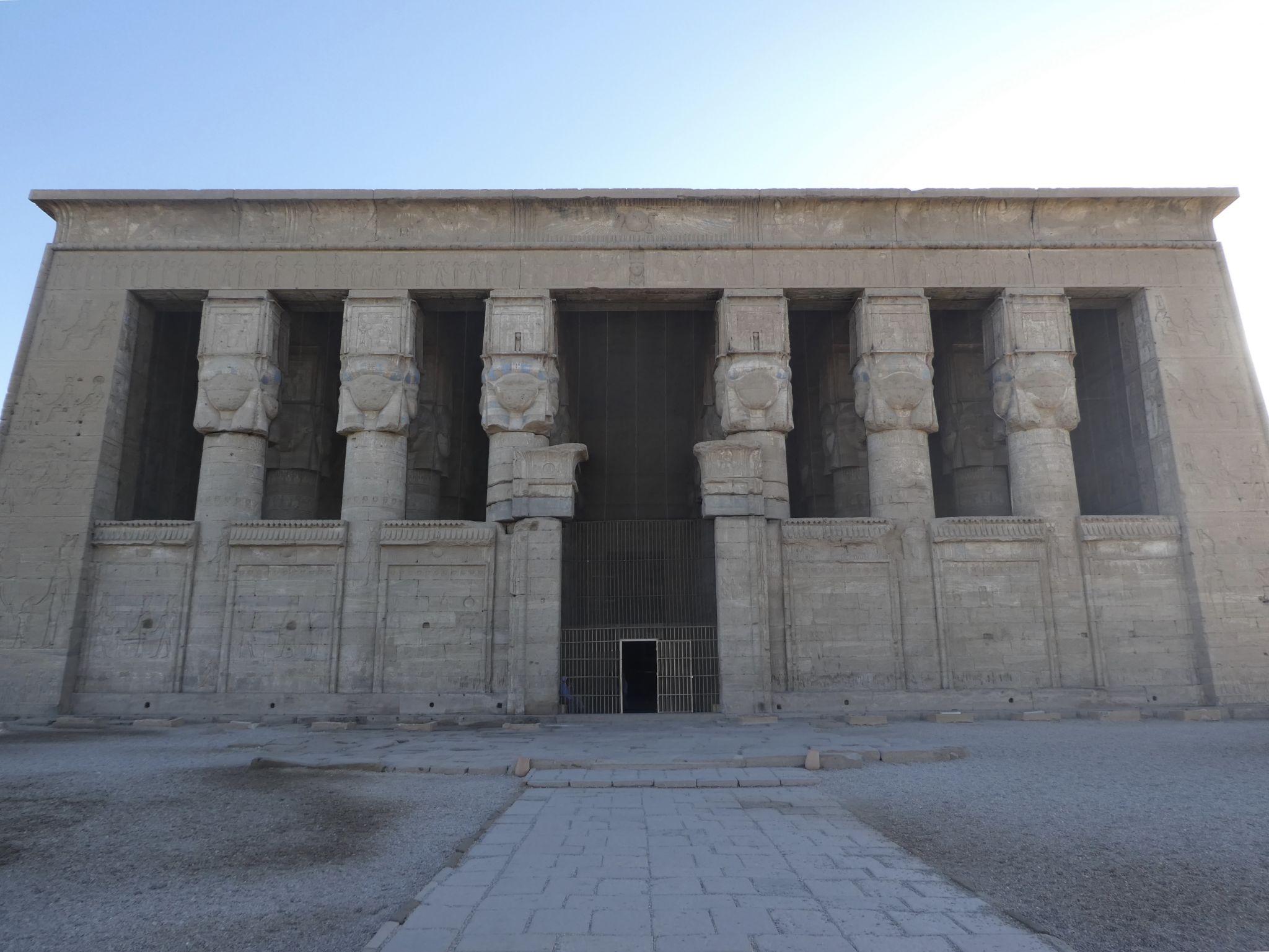 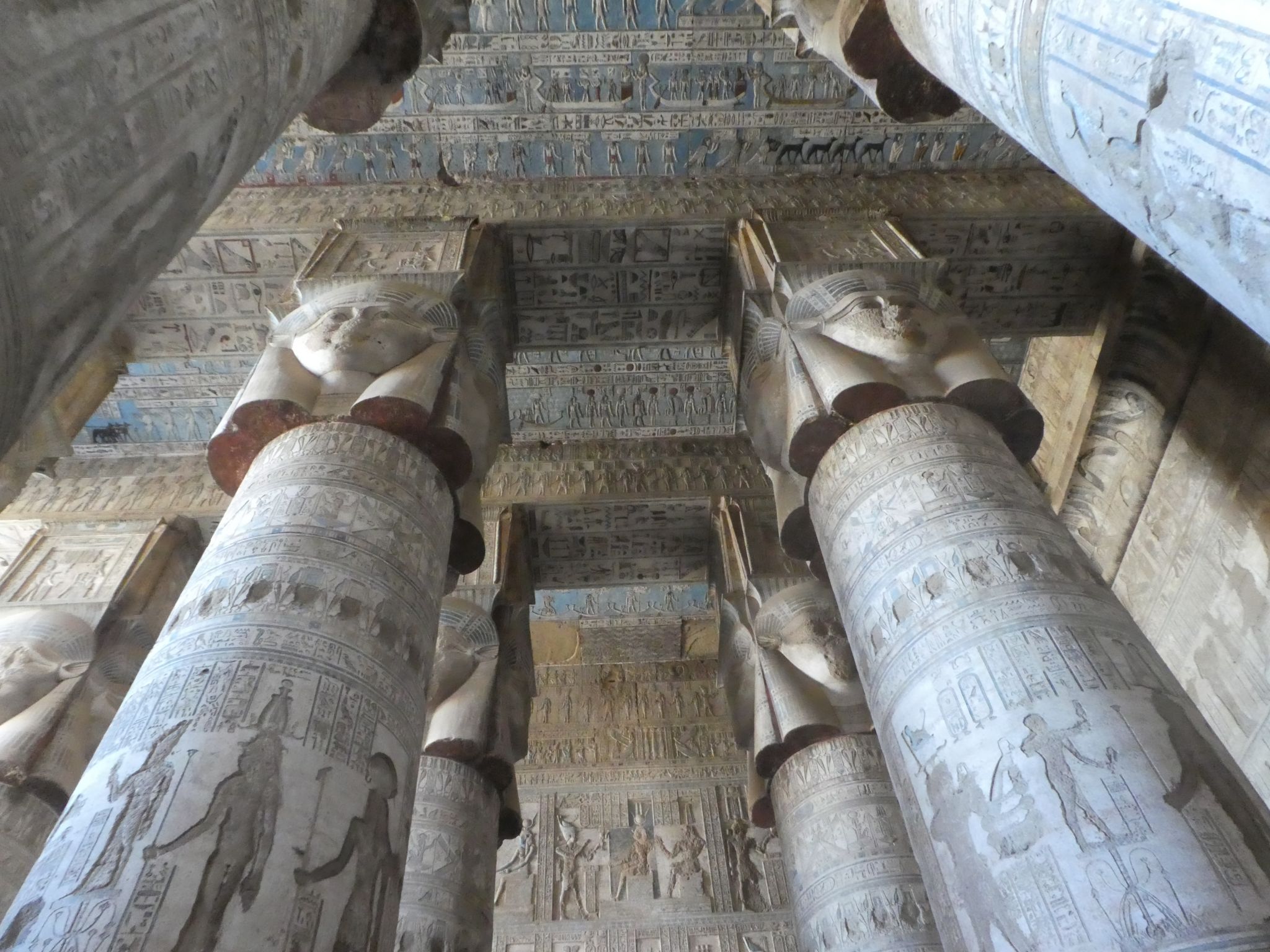 It’s also very interesting because it was built in the era when the Greeks ruled Egypt.  To gain acceptance by local people, the Greek kings built temples in which they depicted themselves as pharaohs paying homage to Egyptian gods, even though they did not recognise those gods themselves. 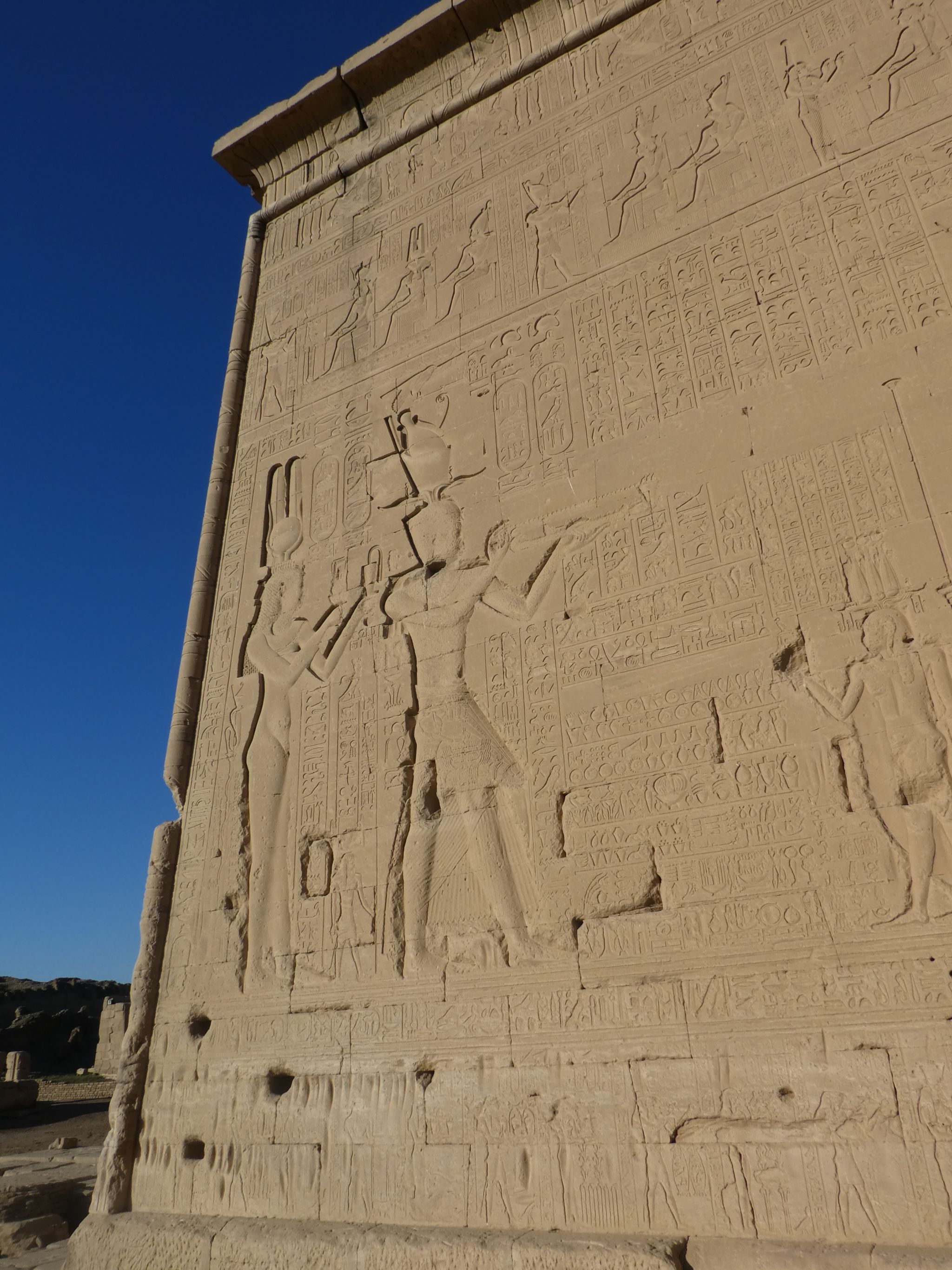 The Greek era temples added a second floor, which at the Dendara temple is accessed by elaborately carved stairways, and Greek elements like these beautiful water drains. 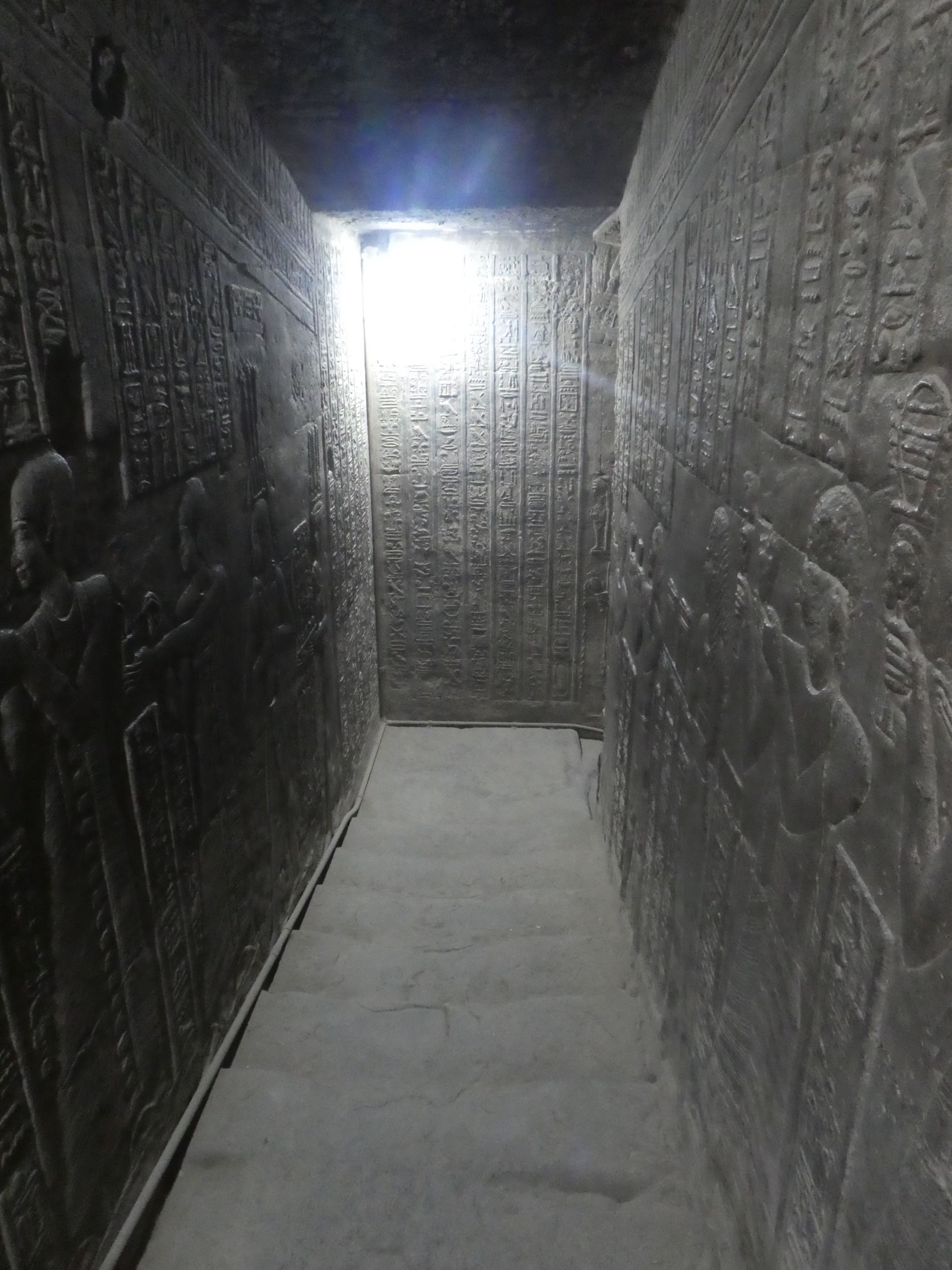 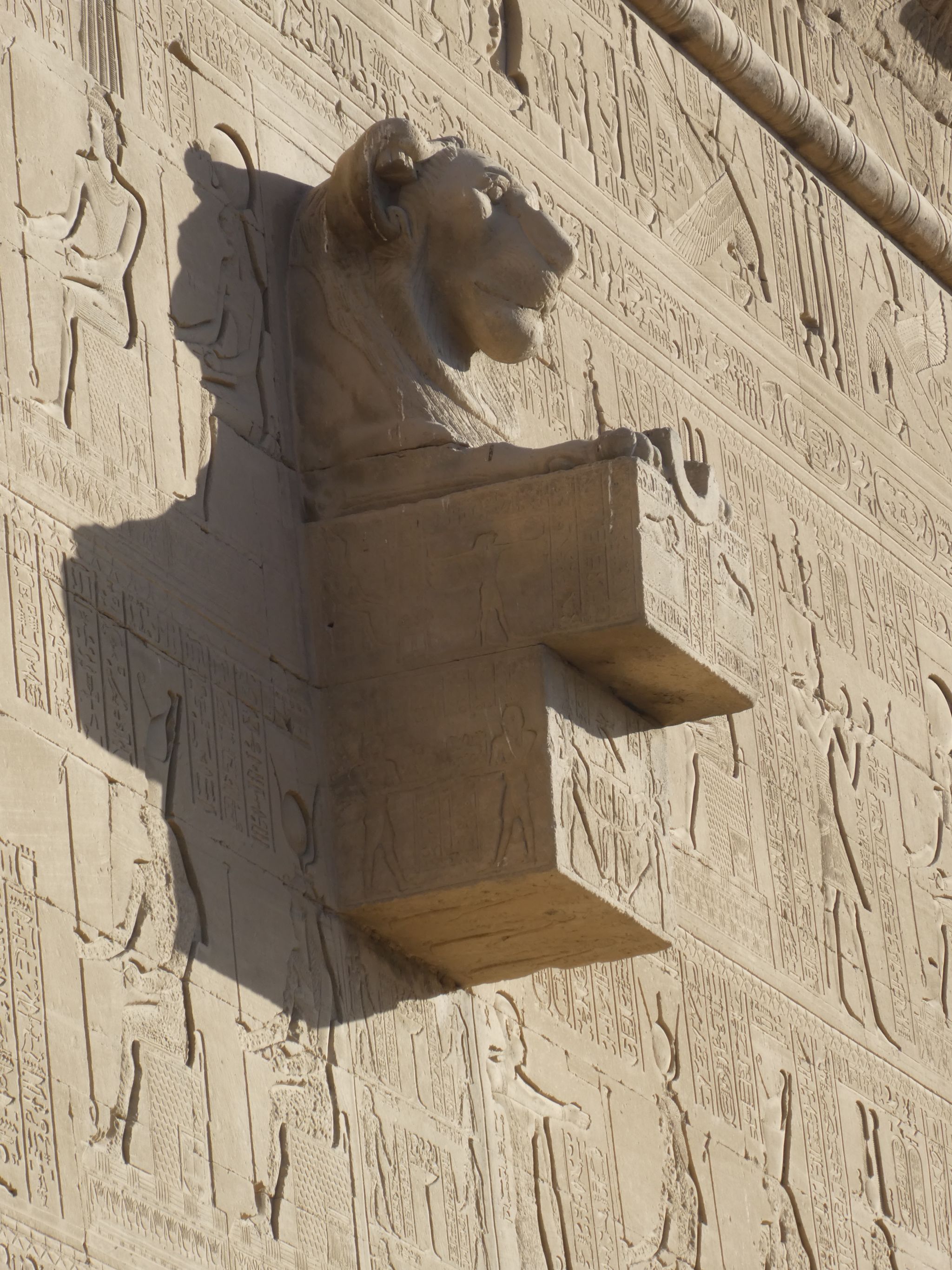 By the end, even Julie was in temple-overload.  It was time for a float down the Nile.  See next post.