Five days, four nights floating along the Nile River from Luxor to Aswan on a dahabiya.  It would have been paradise, except for those damn temples…..

There is no doubt that the best way to cruise the Nile is on a dahabiya.  These traditional, elegant sailing boats were much favoured by the wealthy in the 1920s to 1940s, and they have an undeniable ‘Death on the Nile’ feel. 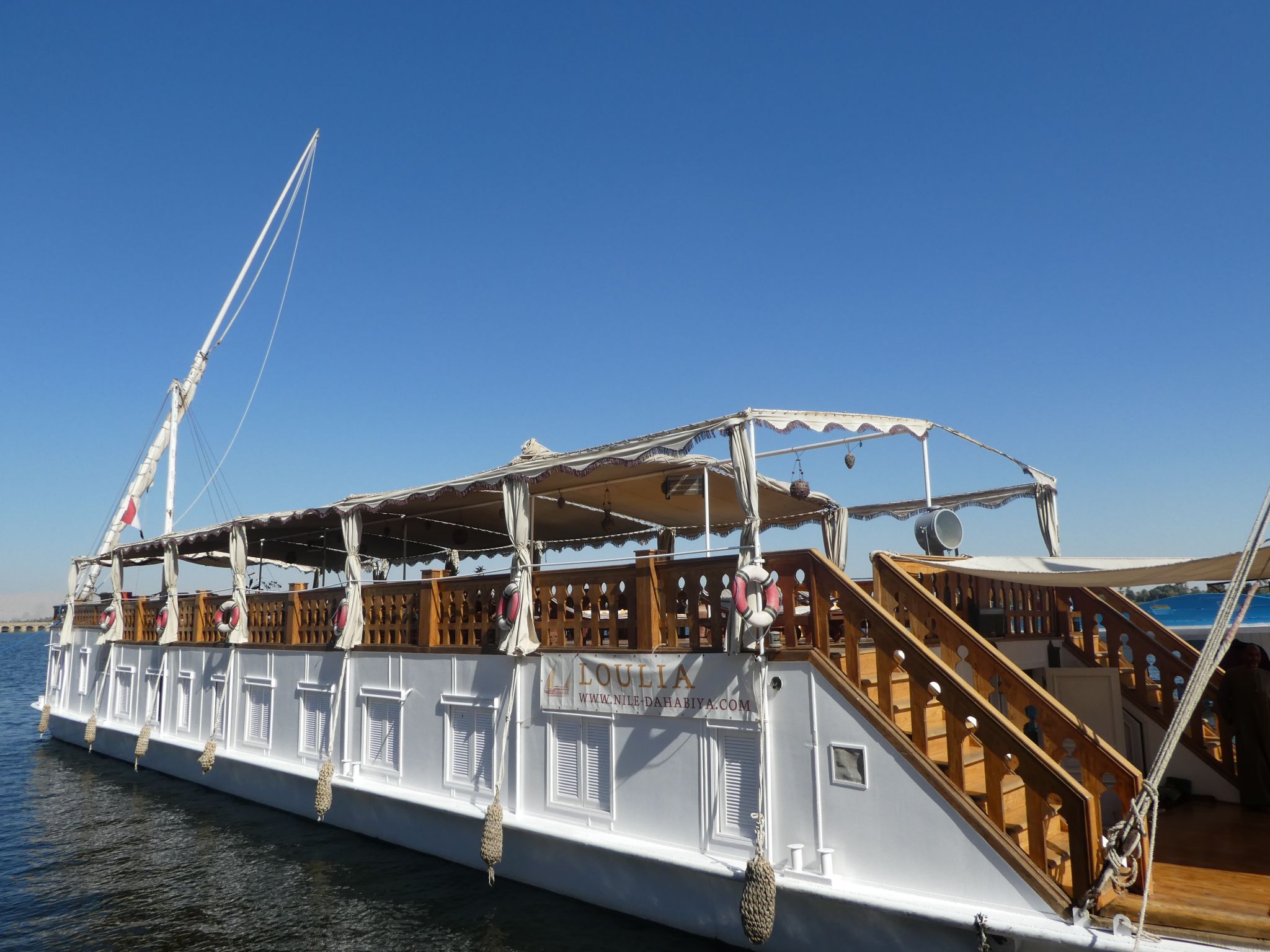 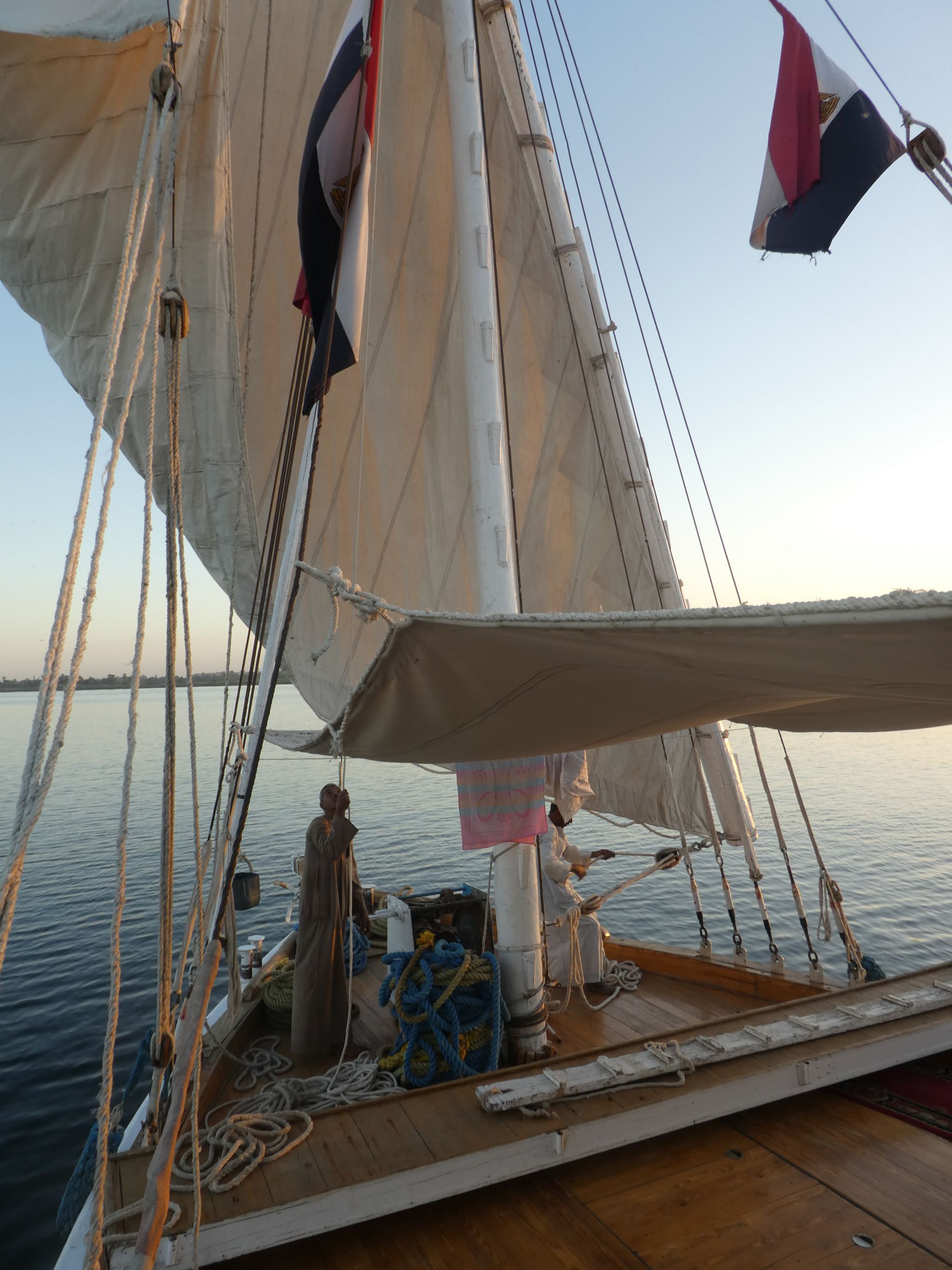 Dahabiyas have no motor, instead relying on two triangular (lateen) sails which allow sailors to tack against the wind.  In reality these days when moving upriver they make use of a tug to tow them against the current if there is no favourable wind. 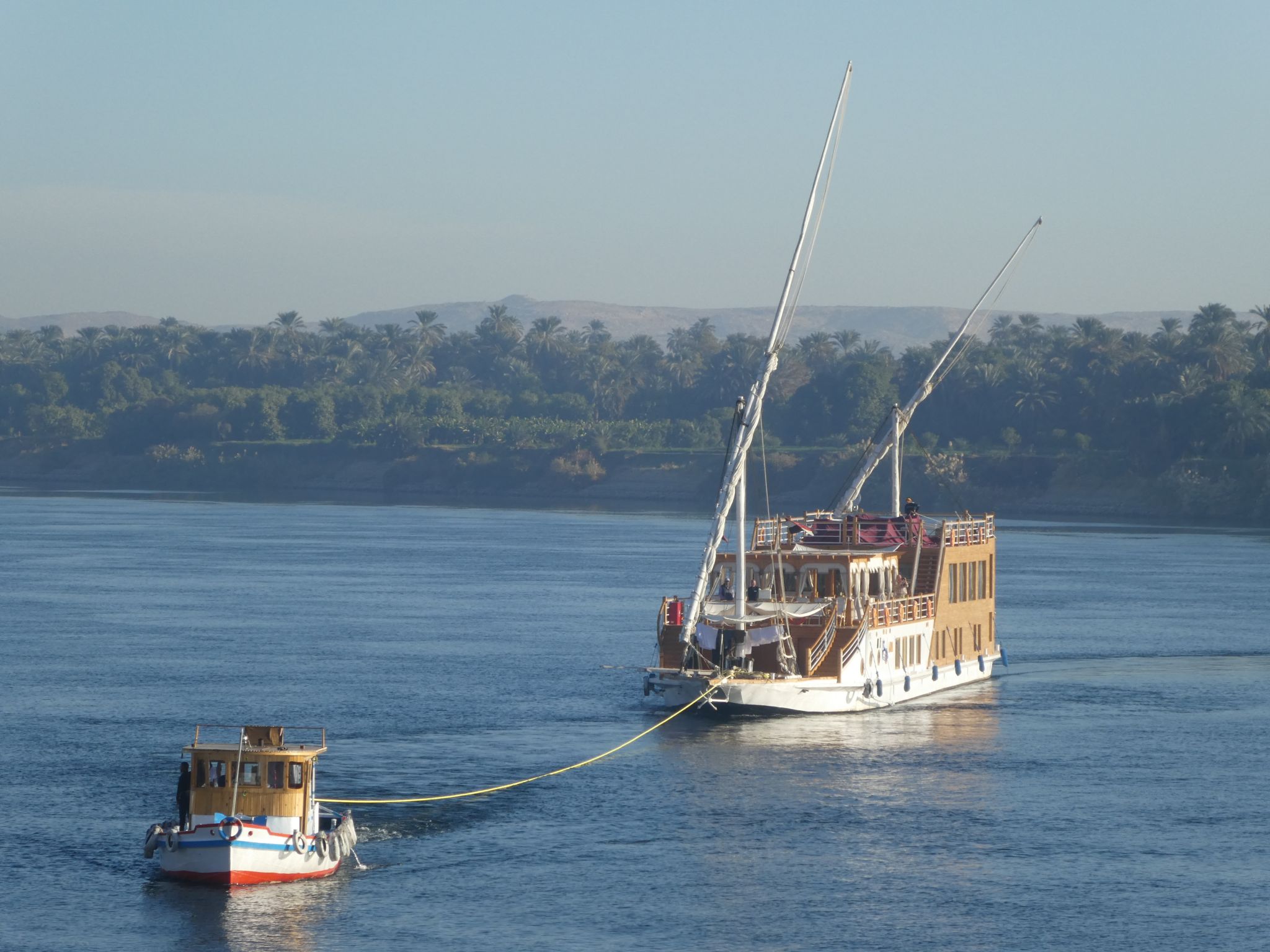 They are wide and flat, with private cabins downstairs and a covered deck upstairs.  Ours had six cabins, but only four couples on board, so lots of space for all. 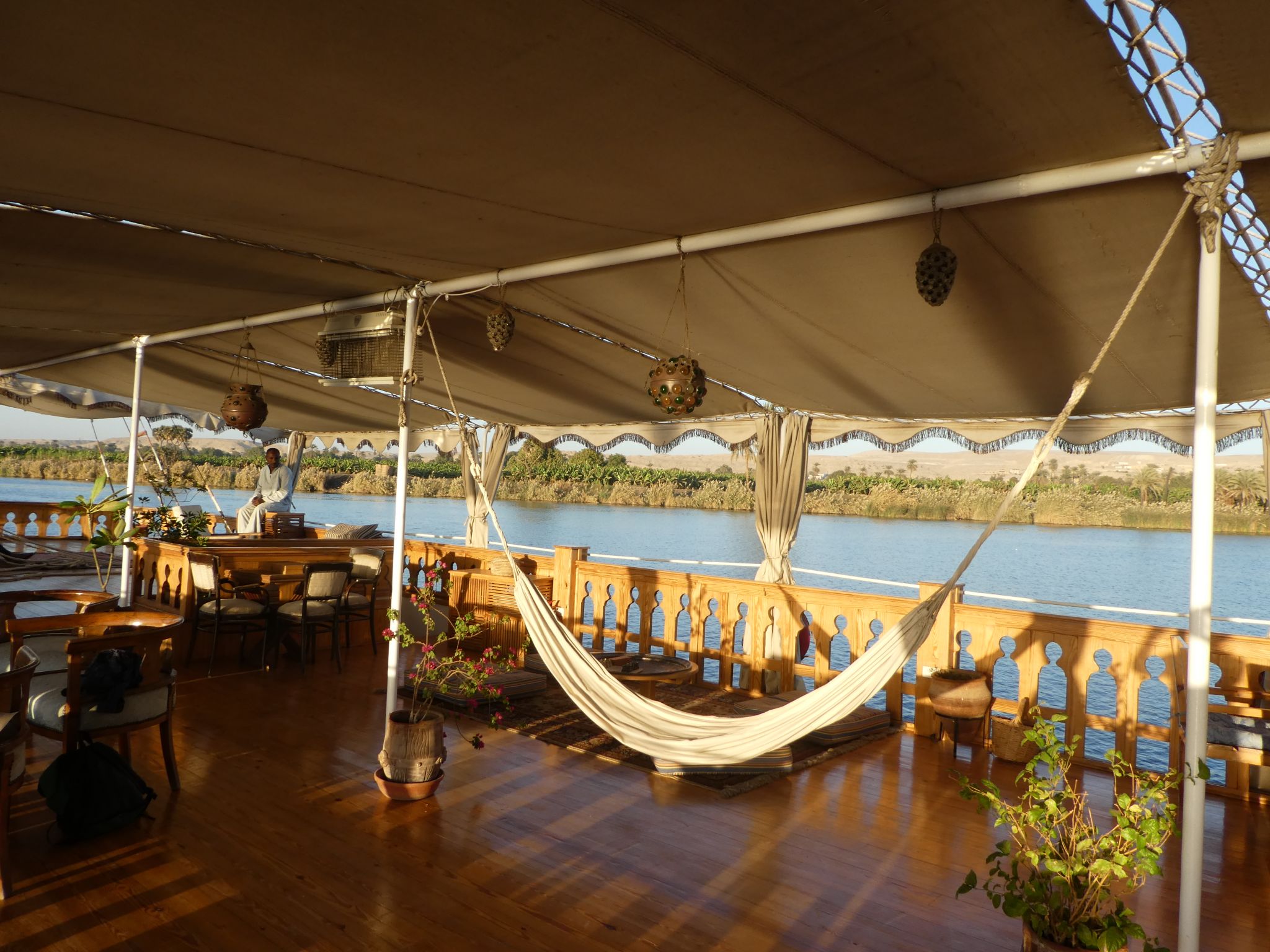 Moving under sail in the late afternoon felt like gliding over the water.  And even in the calm conditions we were in awe of the agility of the crew. 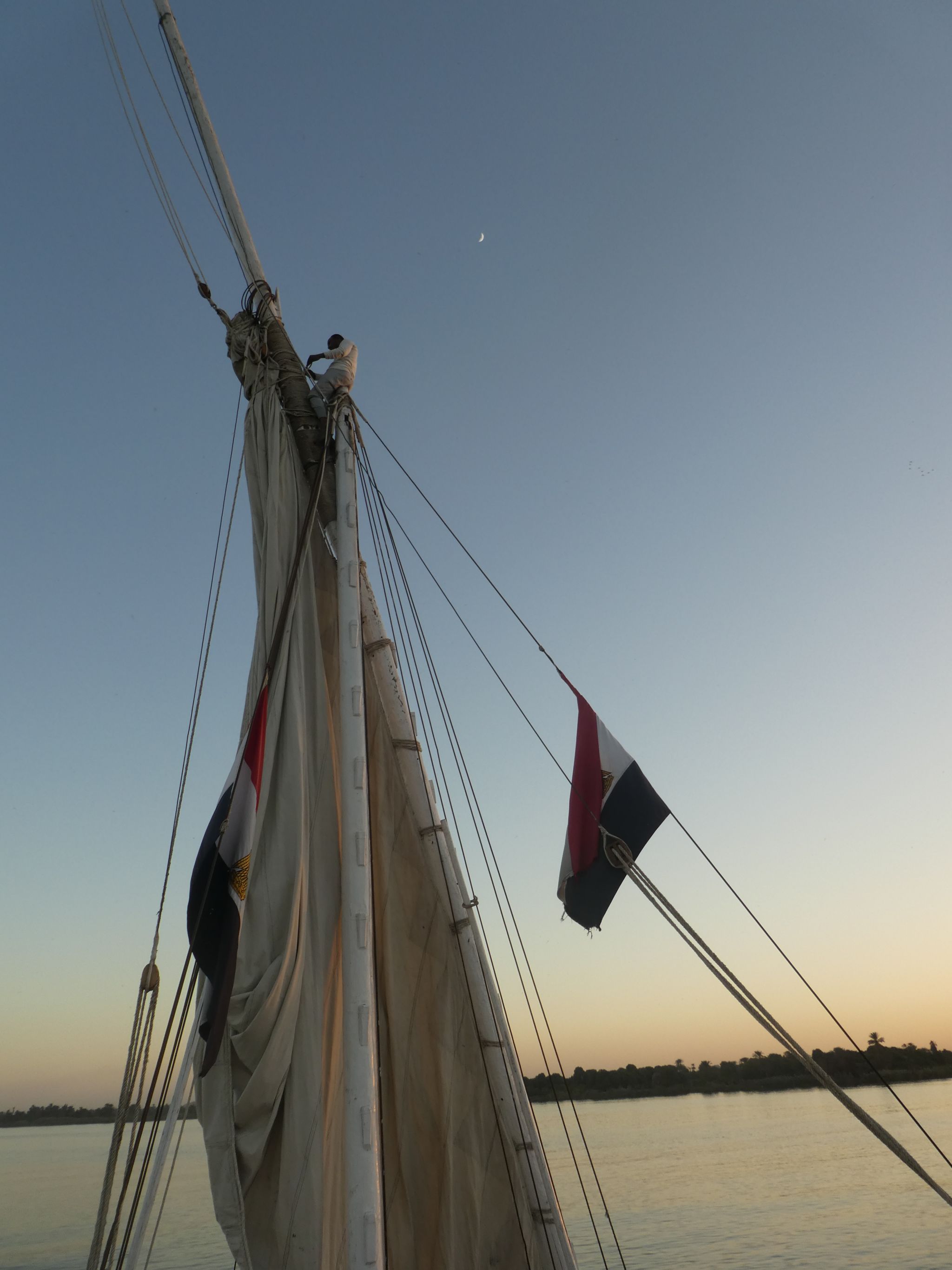 There was plenty of activity along the river.  We saw locals fishing with nets, using a pole to stir up fish.  Also, many felucca boats, the traditional versions of which also only operate under sail. 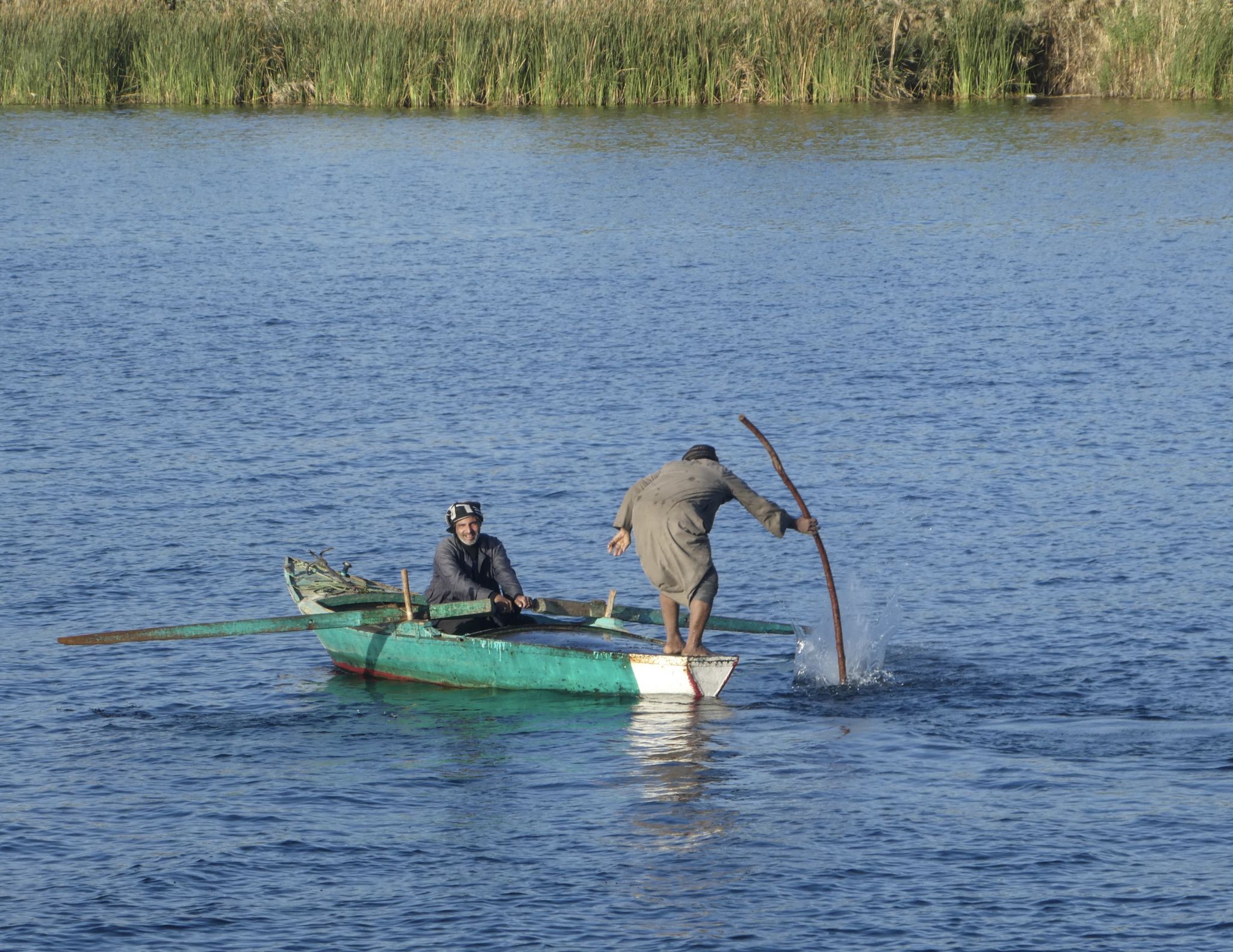 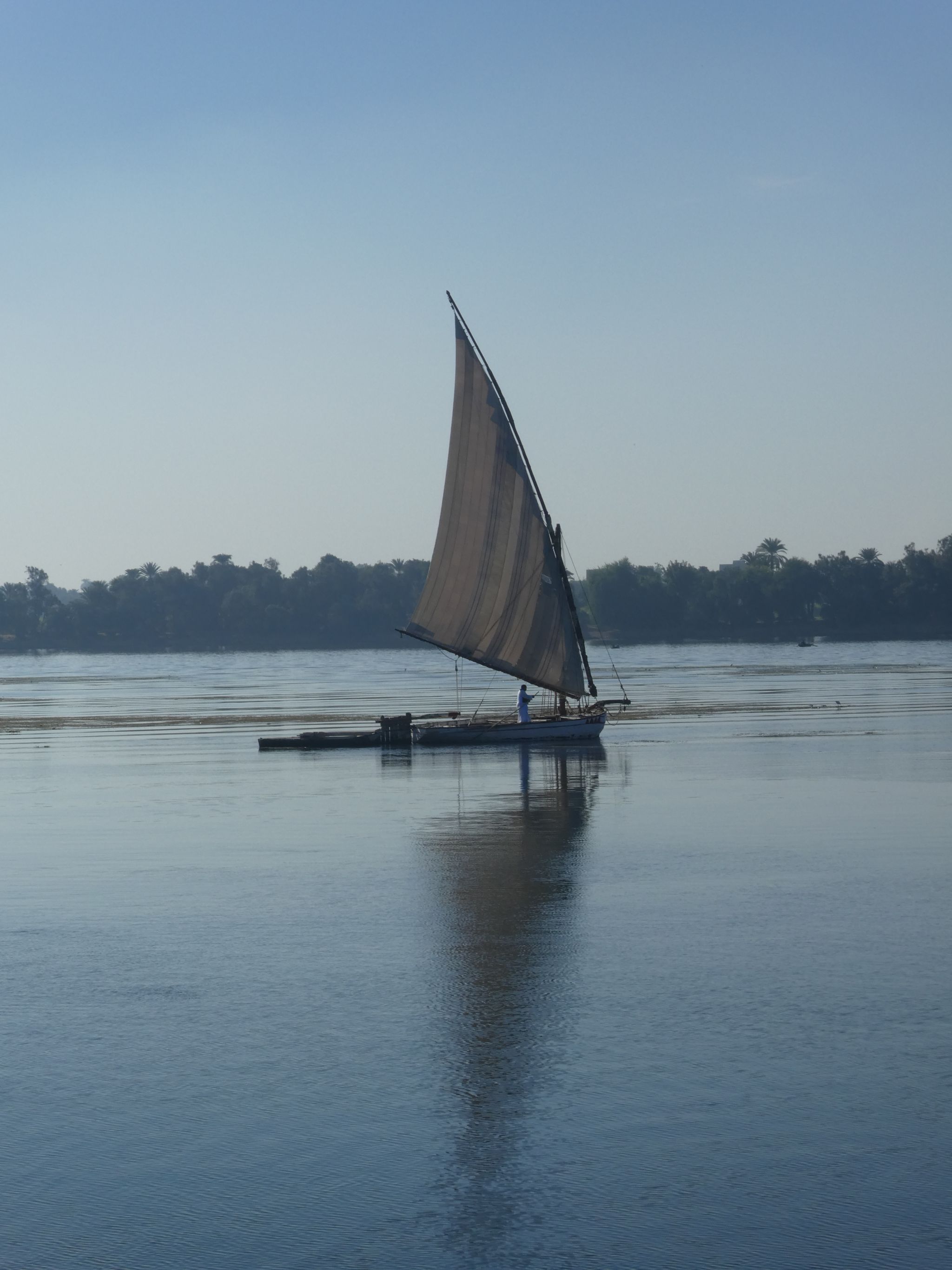 And an abundance of bird life. 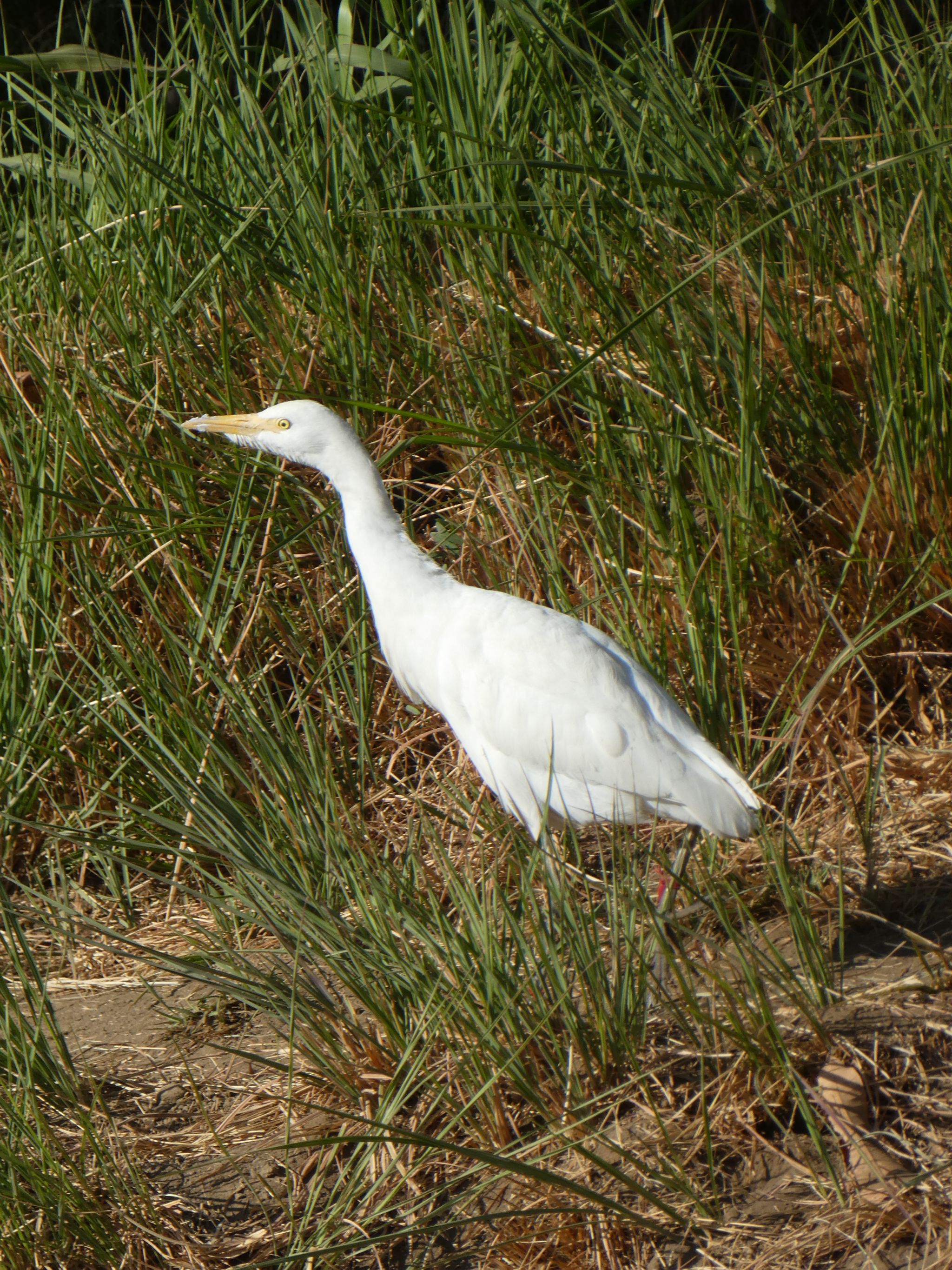 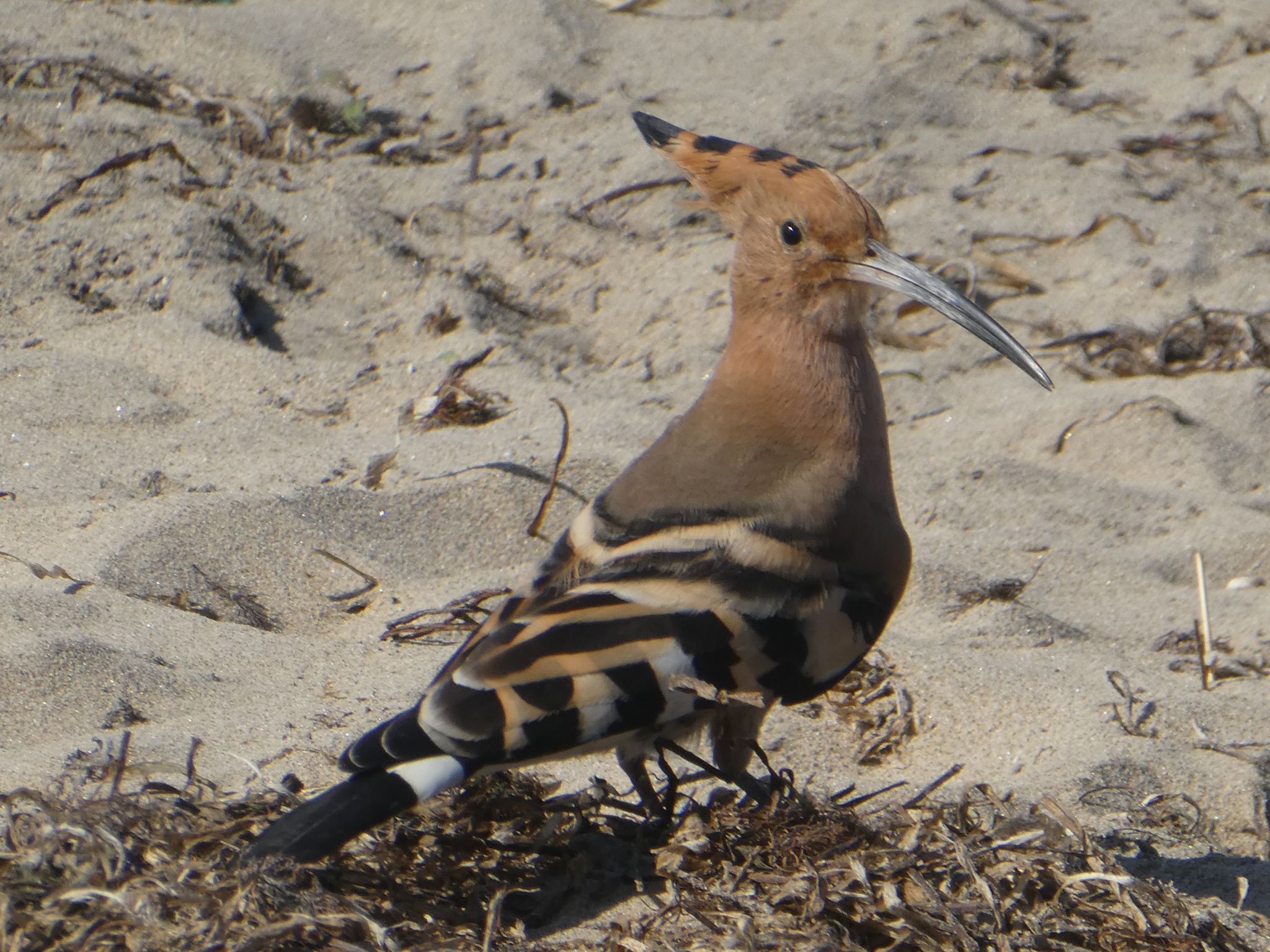 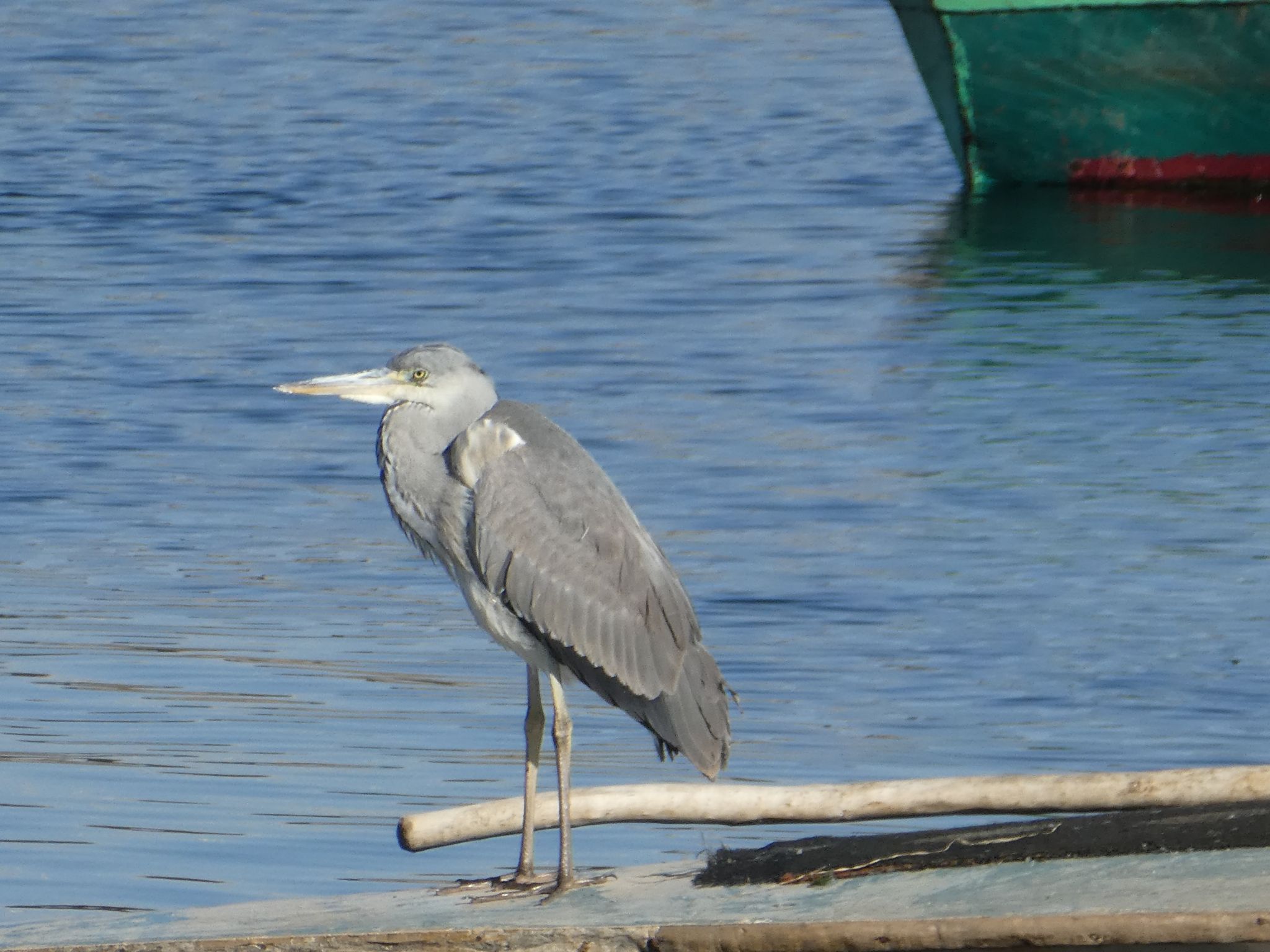 We did shore trips every day.  One temple per day was probably great for the four who were just starting their Egypt trip.  For the other four of us, who’d already overdosed at Luxor, it was a little wearing, but here’s a few examples of ones we saw. 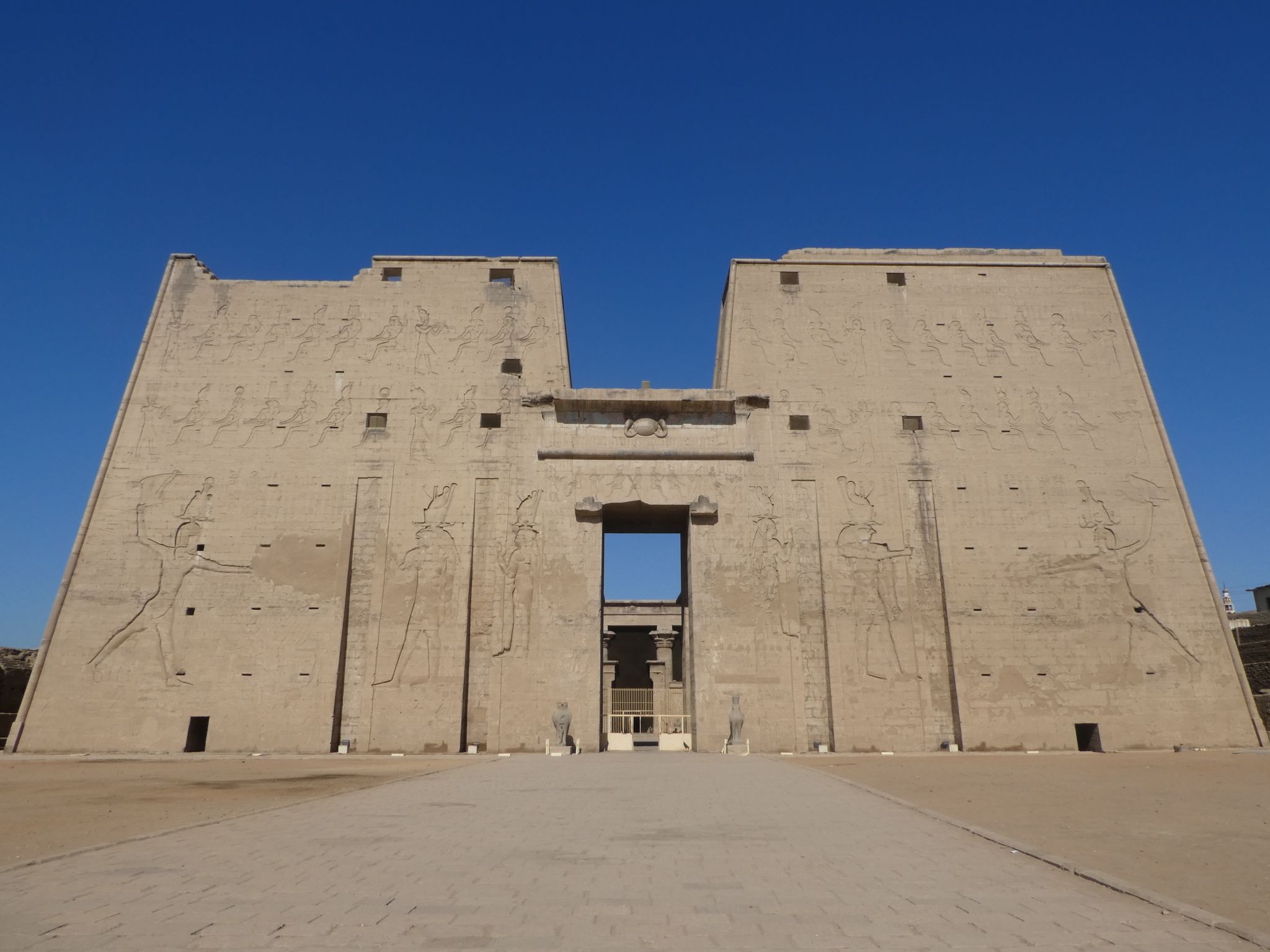 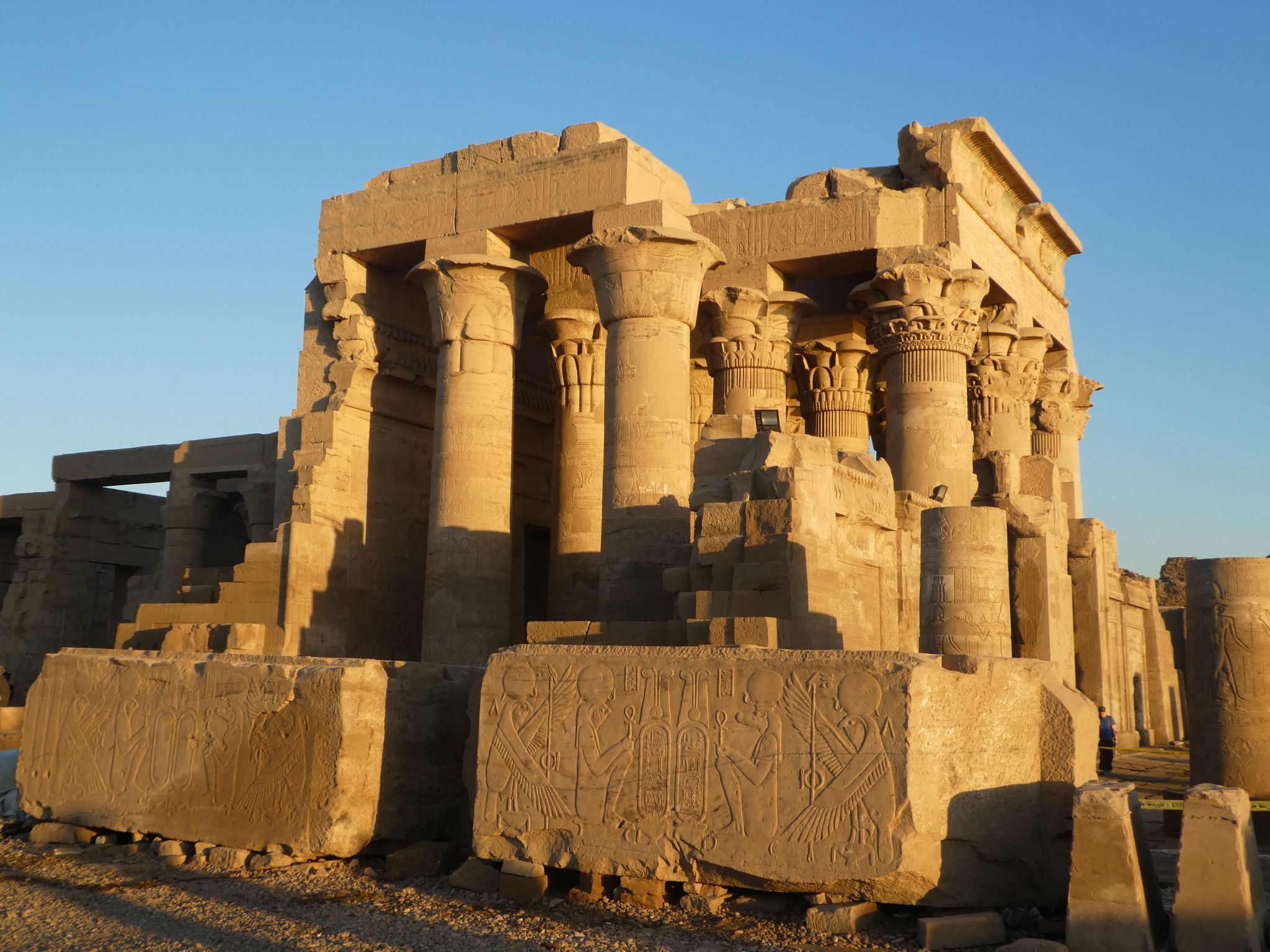 That second one is the Temple of Kom Ombo, dedicated to the crocodile god, Sobek.  In its day, it had a contingent of sacred crocodiles housed in a crocodile pool, which were, you guessed it, mummified when they died.  So there’s a museum on site dedicated to mummified crocodiles. 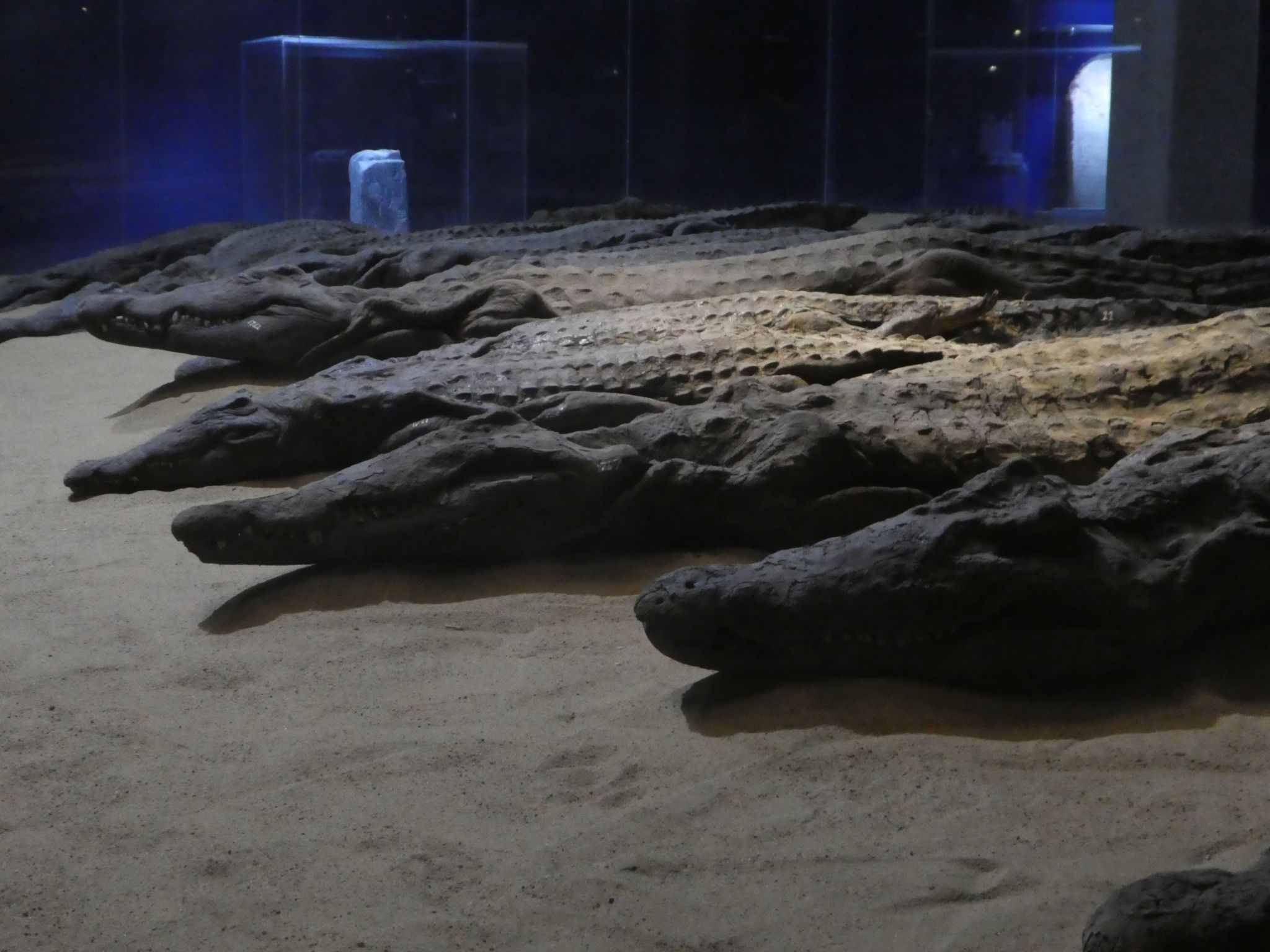 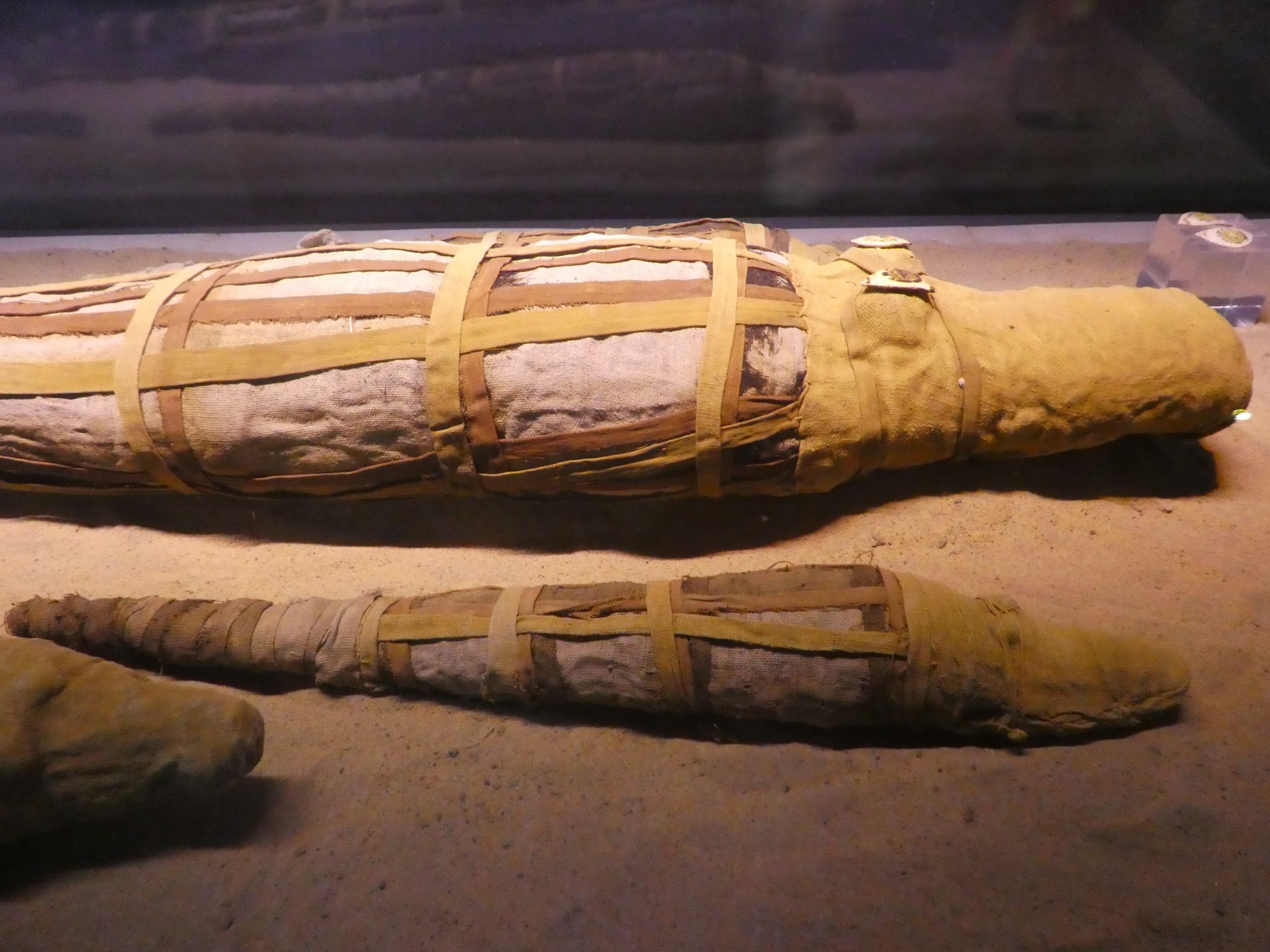 We also visited one of the ancient quarries where huge blocks of sandstone were cut by hand and manoeuvred onto ships for transportation.  Obelisks in Luxor’s Karnak Temple weighing between 100 and 500 tonnes came from here.  Experts are still debating how the ancient Egyptians manoeuvred such enormous objects onto the boats.  Gouging in the rock faces near the riverbank suggest boats were forced through narrow channels between the rocky cliffs to the side of the river, rose with the flooding river and floated out with their cargo on board.

Quarry workers lived on site, toiling away through the dry season and returning to their homes only after the flood.  They left behind temples dedicated to their local gods and carvings about their families far away. 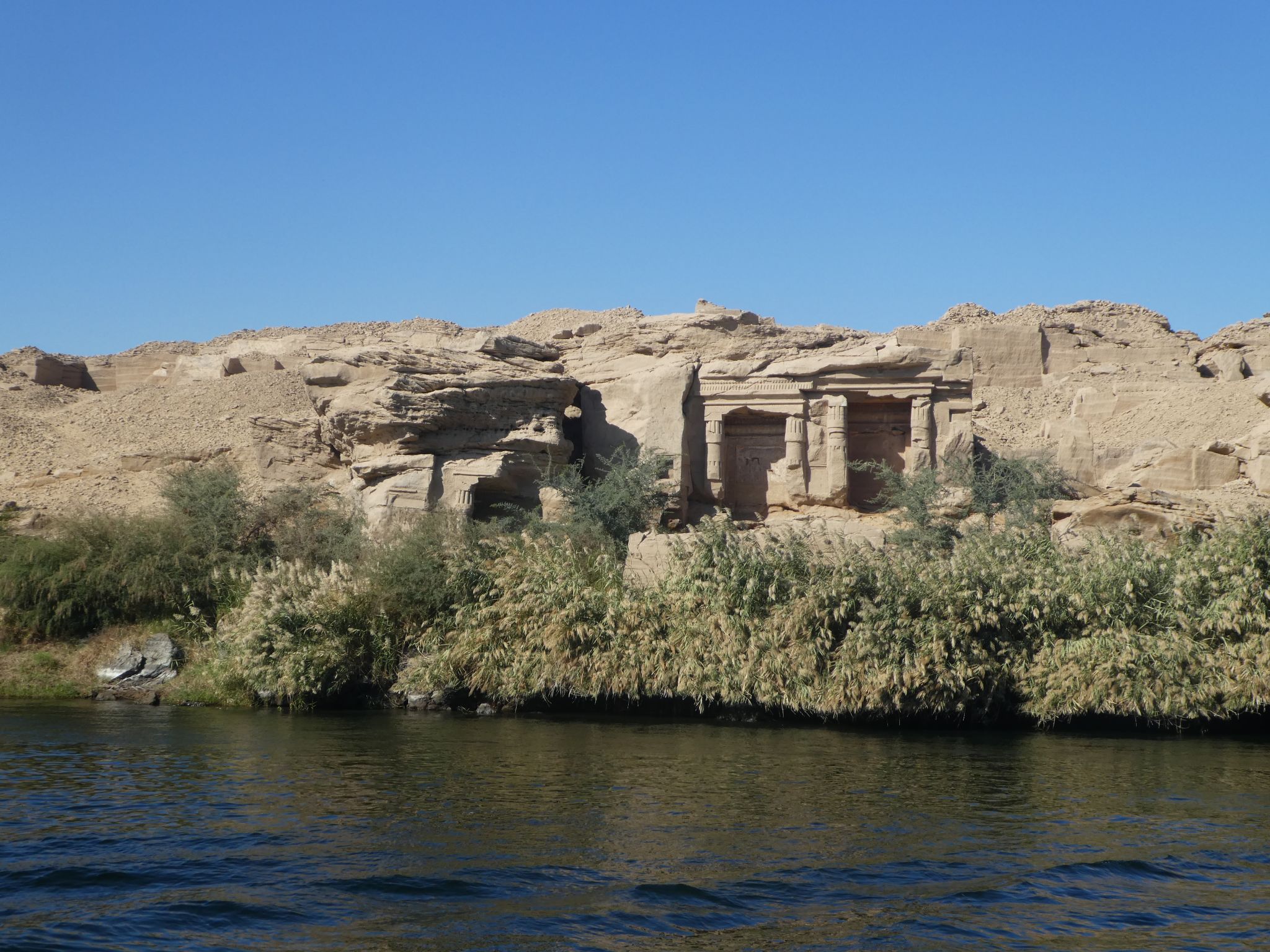 Our last shore trip was to the Daraw camel market.  Camels from Sudan are walked in caravans to the market and sold, some for meat, some as beasts of burden. 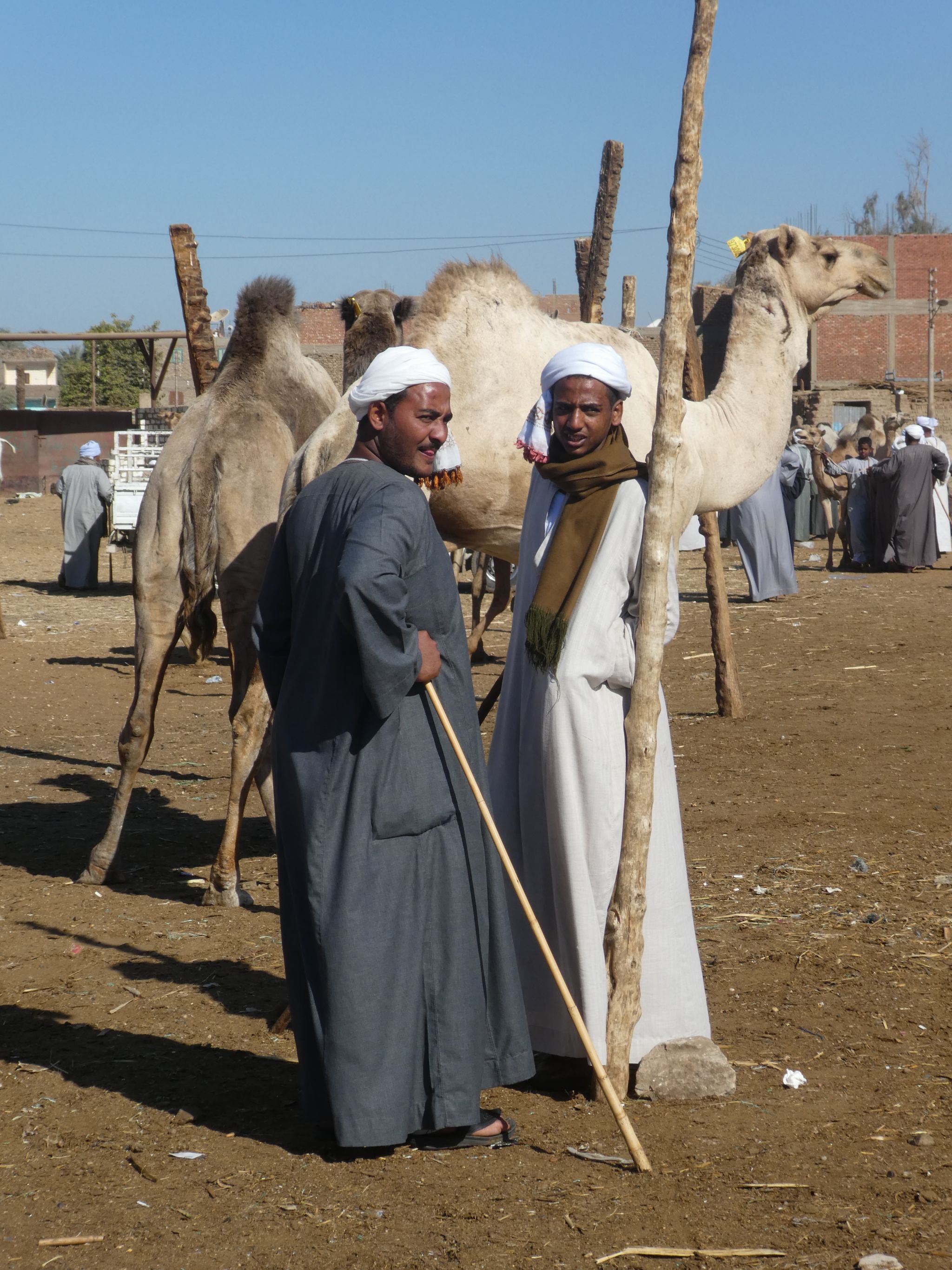 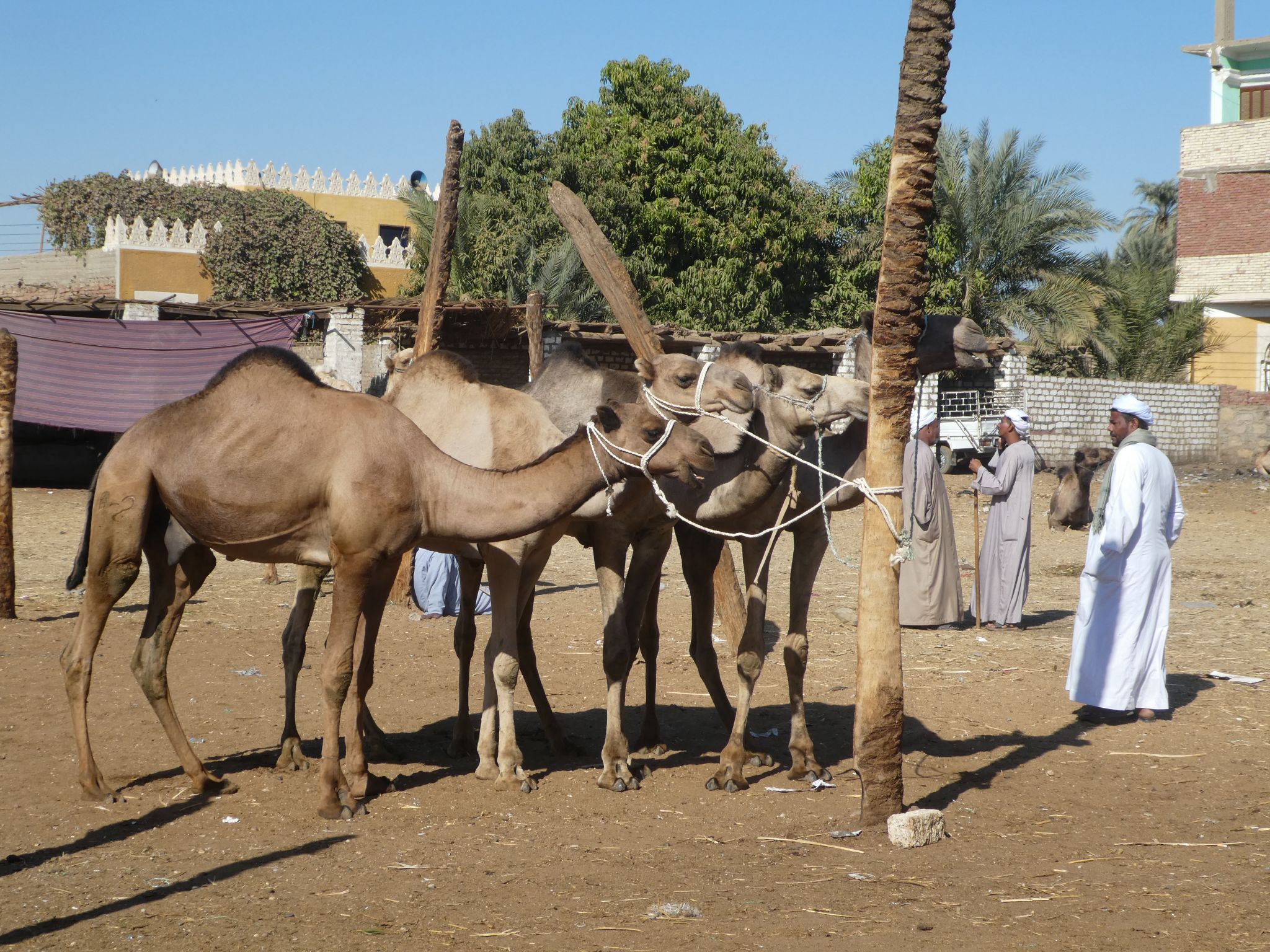 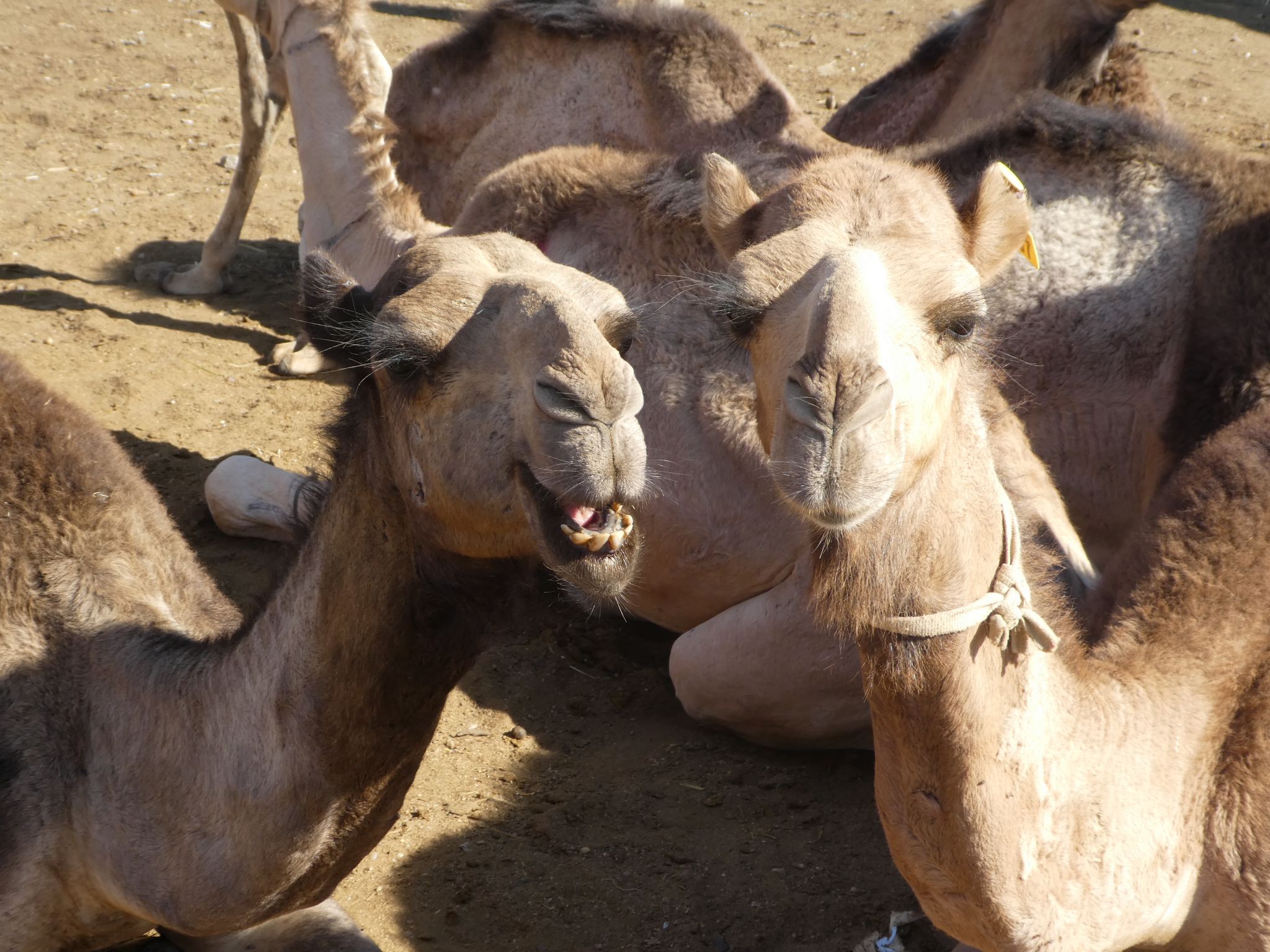 Having walked so far, these guys looked pleased to be getting a lift to their next destination! 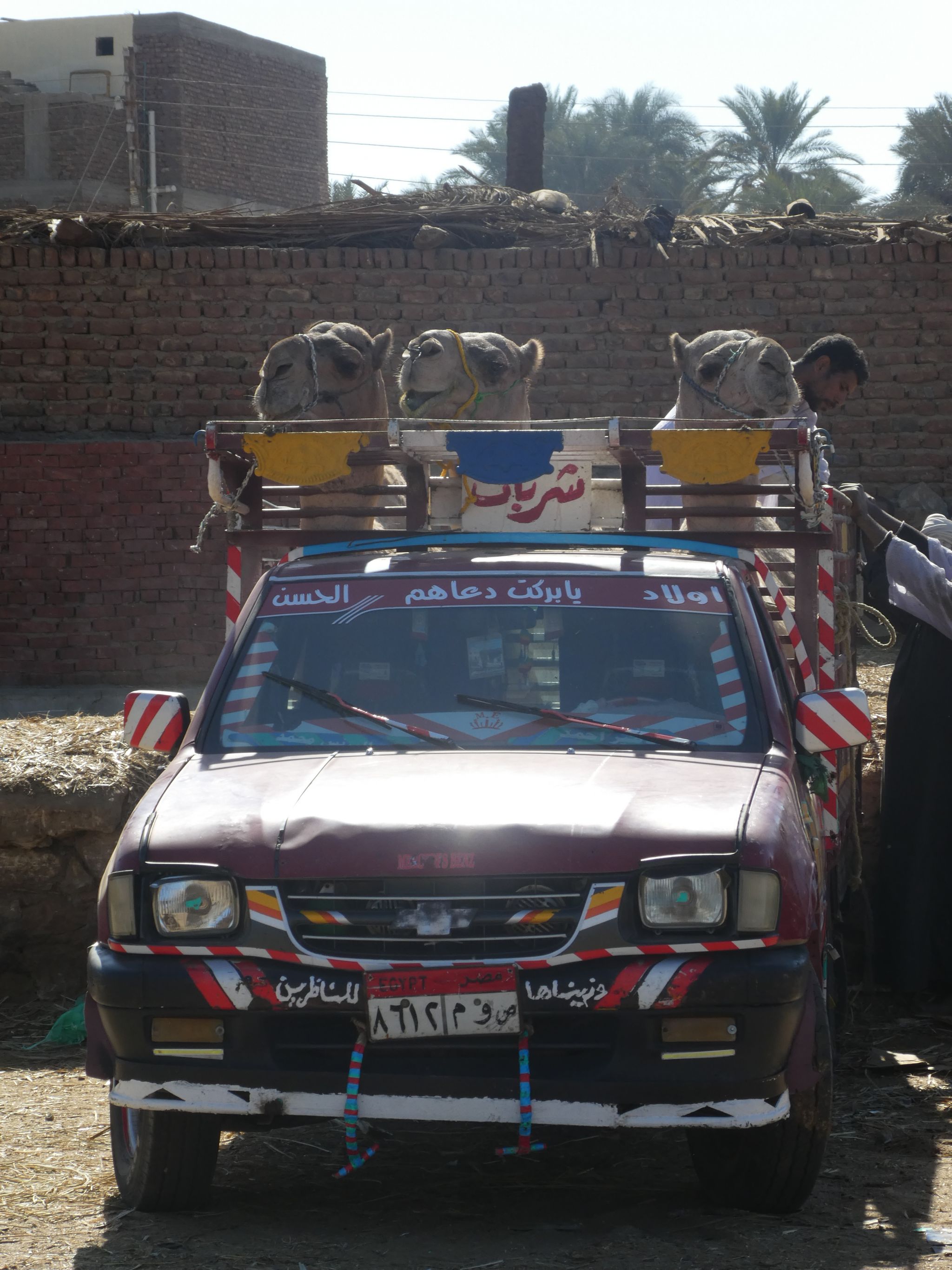 Then we visited the local market.  Some of those camels might not have looked so relaxed if they’d realised where they might be headed. 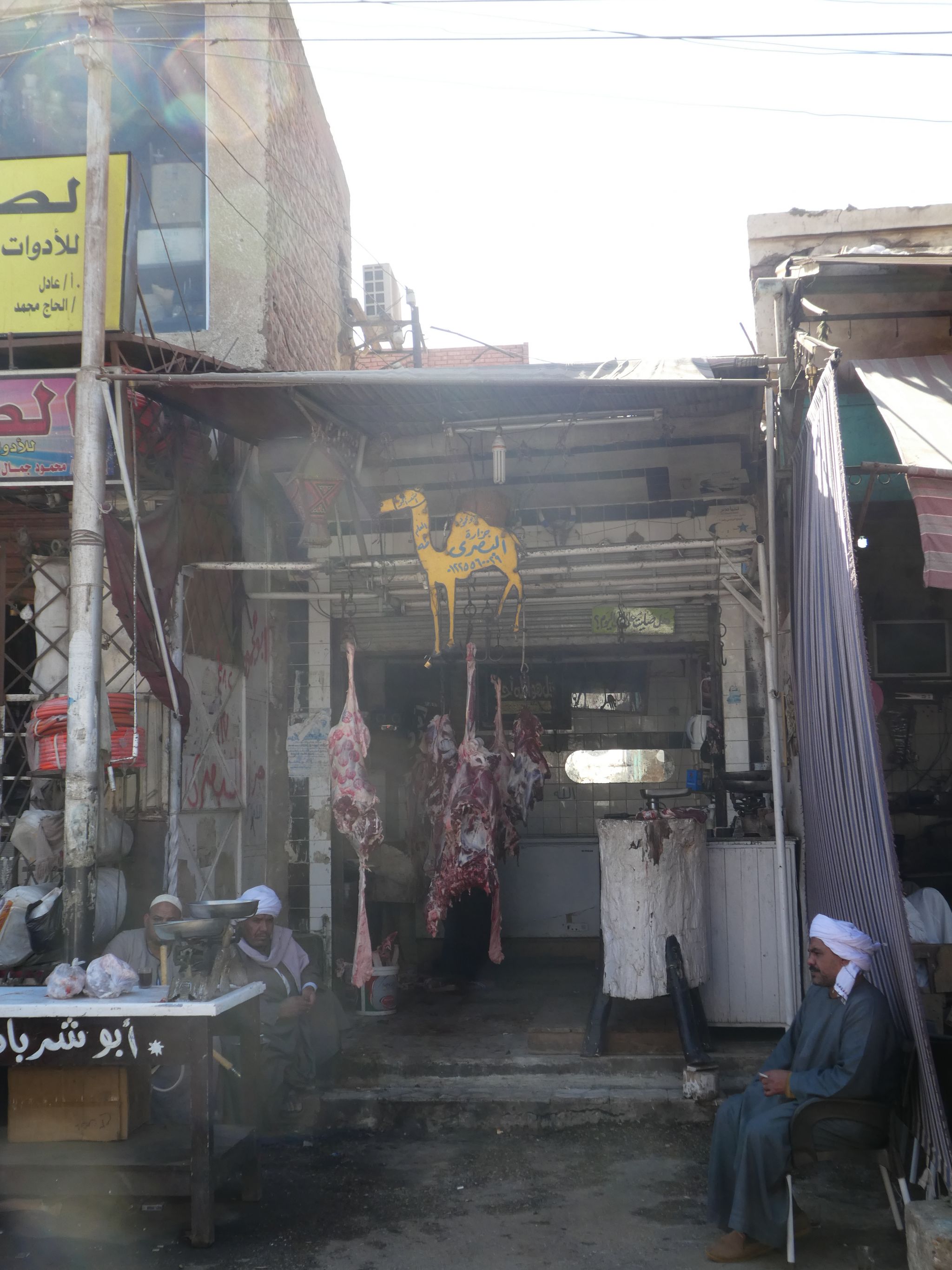 After the cruise we spent a few days in Aswan to make onward travel plans.  We weren’t much taken with Aswan.  Here we encountered the most aggressive touting and hassle of anywhere in Egypt.

But we had to stay to see one last temple.  Yes, incontrovertible proof that John loves Julie – he agreed to one more.  The big one.  The ultimate ‘must see’ one.  The one that’s on just about every poster, travel ad and promo for Egypt.  The second most photographed monument in the country.  Abu Simbel.

The Abu Simbel temples were built between 1264 and 1244BCE, lost to the desert sands some centuries later, and only re-discovered in 1813 when an observant archaeologist found the top frieze of the main temple sticking up out of the sand.  Years of work was needed to uncover the lost temples in full.

The temples were built into a slope on the shores of the Nile River, and like a number of other temples along this stretch of the river, they faced being completely submerged by the rising waters of Lake Nasser when the Aswan Dam was built in the 1960s.

UNESCO coordinated a massive project involving a multinational team of engineers, archeologists and other experts, in which the temples were carefully cut into massive blocks averaging 20 tonnes each, and moved to a site 65 metres higher and 200 metres back from the river.

The project took four years and cost $US40 million, equivalent to about $US300 million today.  It is considered one of greatest archeological challenges in history.

This is not a replica, nor did it involve patching up or restoration of damaged parts of the original. What was missing or damaged before, remains that way.    These temples are the originals, deconstructed and put back together.  None of the giant pieces was broken in the process and the re-joining is so careful that if you didn’t know, you’d never pick it.

It’s hard to get a sense of the size of these temples from photographs, but to give you some idea, yes, that’s John sitting on the steps in the middle photo below. 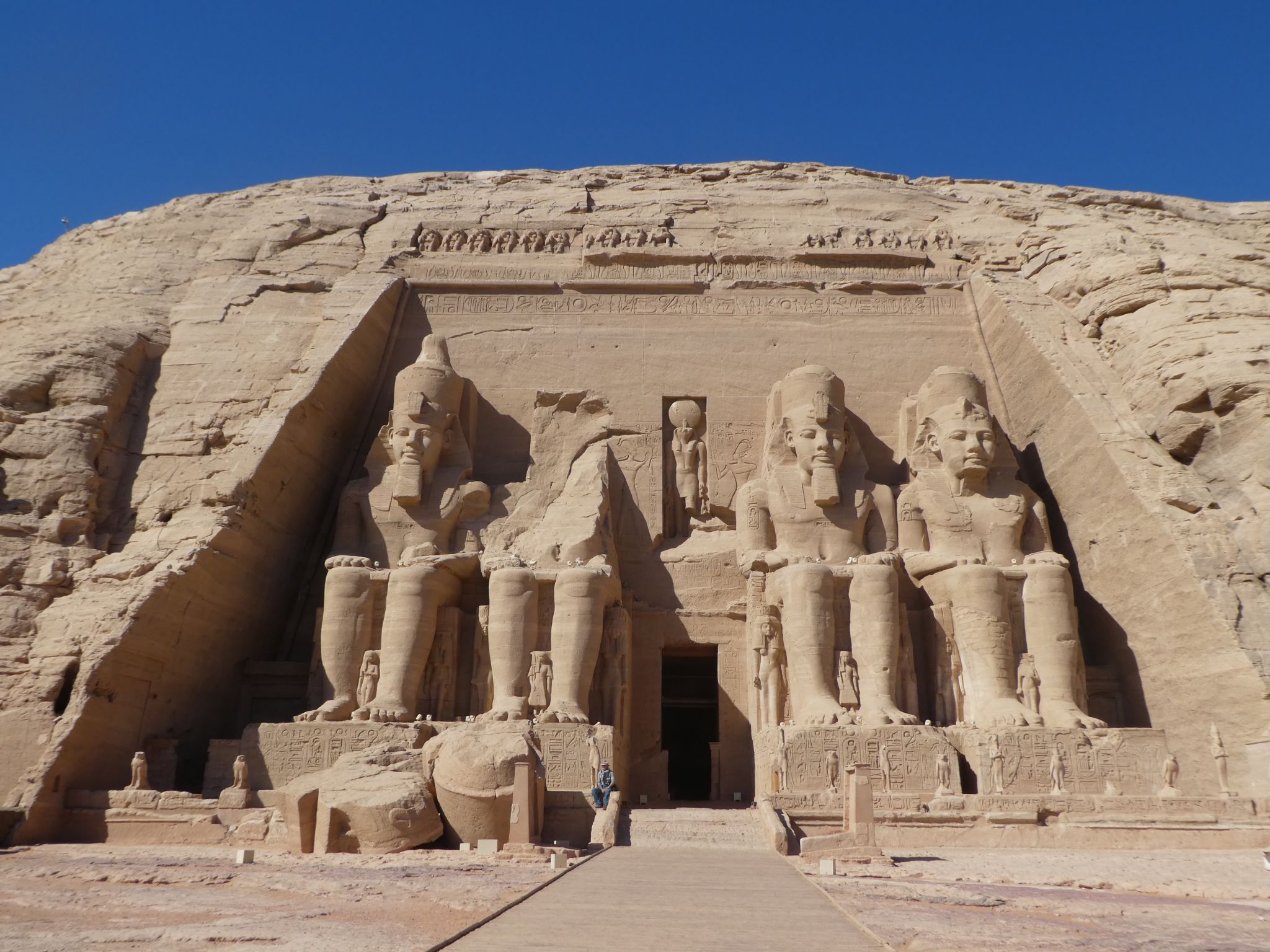 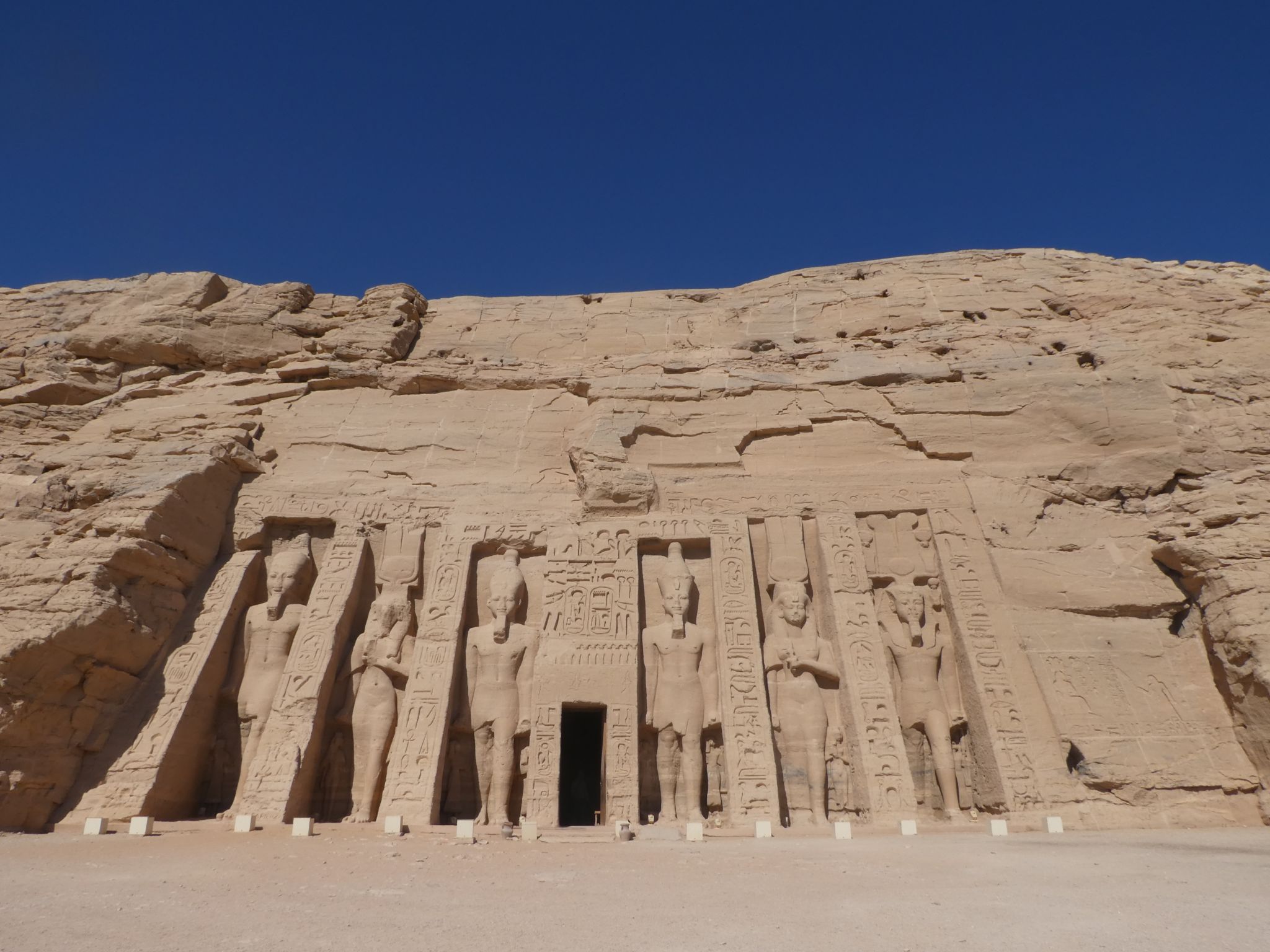 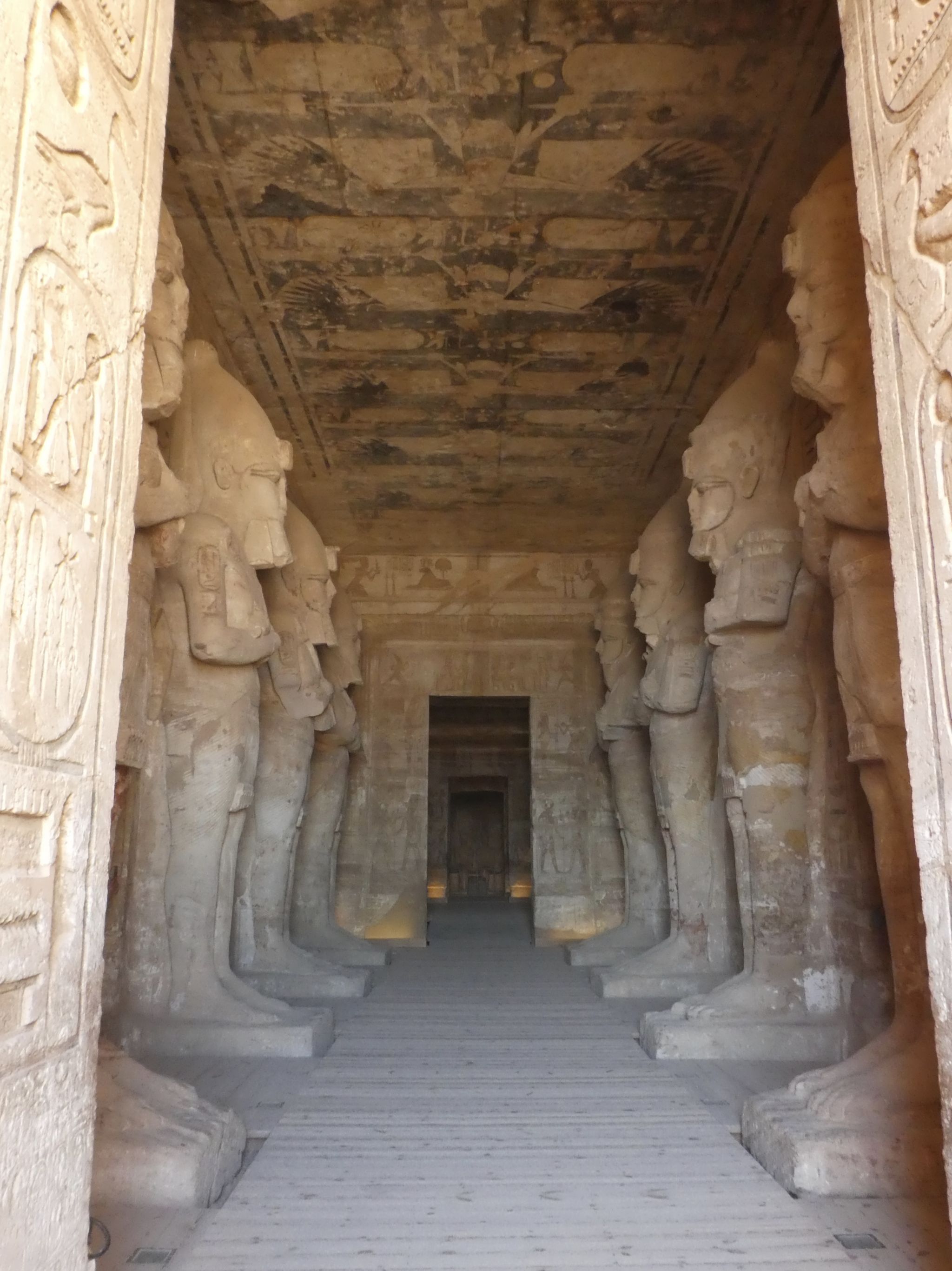 These temples are big.  Really big.  The guys seated at the entrance to the Great Temple are 20 metres tall.  This cleaner really needs a much longer handle for his brush. 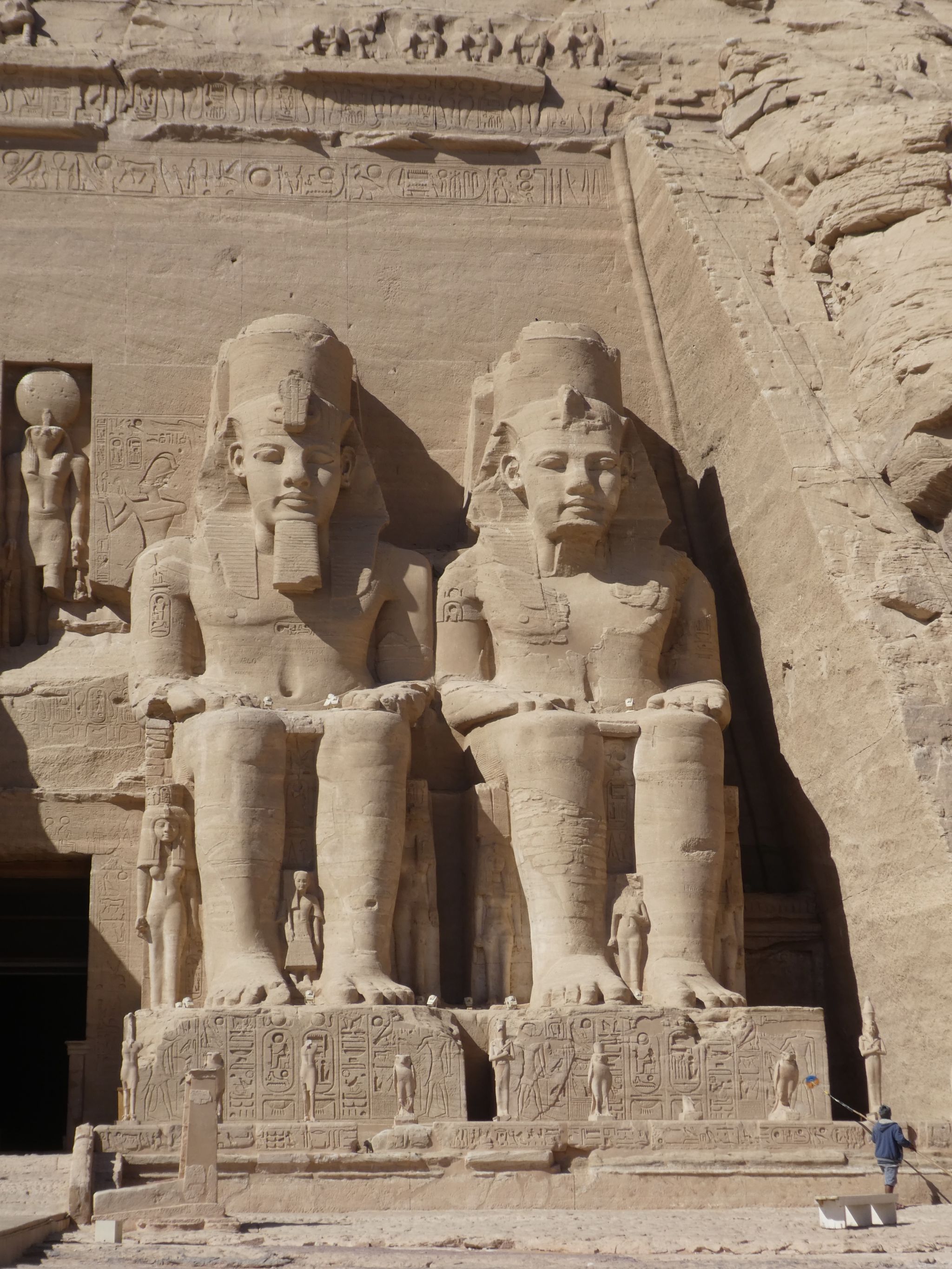 The key to a great visit to Abu Simbel is timing.  Any driver or tour operator you speak to in Aswan will say they leave at 5am so they can get you to the temple by 8am, complete the visit by 10.30am, and get back to Aswan by early afternoon.  Supposedly this is to avoid visiting in the heat of the day – not an issue in December – and because a lot of people have onward flight/train arrangements in the late afternoon.

It’s probably also a hangover from the days, not so long ago, when all vehicles heading to Abu Simbel were required by law to travel in a single convoy which had armed vehicles front and back due to perceived terrorist risk.  Thankfully that’s no longer the case.

So we suggest doing what we did – hire a driver rather than joining a tour, and insist on leaving Aswan at 7.30am, which gets you to the site at 10.30am, just as everyone is leaving.  We had the site entirely to ourselves but for one other guy.

And yes, it is worth driving 230km south from Aswan to see.  Really, it is.

So, where to next?  We thought about heading south into Sudan, but it looked like our Egypt visas would run out before we could get visas for Sudan finalised.  And things to see in Sudan seemed to be pyramids (done them), temples (over-done them) and food riots.

John: “Any temples there?”