For most people our age, the name Ethiopia evokes images of famine, Live Aid and the resulting virtual canonisation of Bob Geldof.  Thankfully, Ethiopia has come a long way since then.

Arriving in Addis Ababa, our first impression was of a clean, relatively modern, well-functioning city.  There is poverty, clearly, but this is a city moving determinedly forward.  It’s clean by African standards.  You can even get your trainers scrubbed. 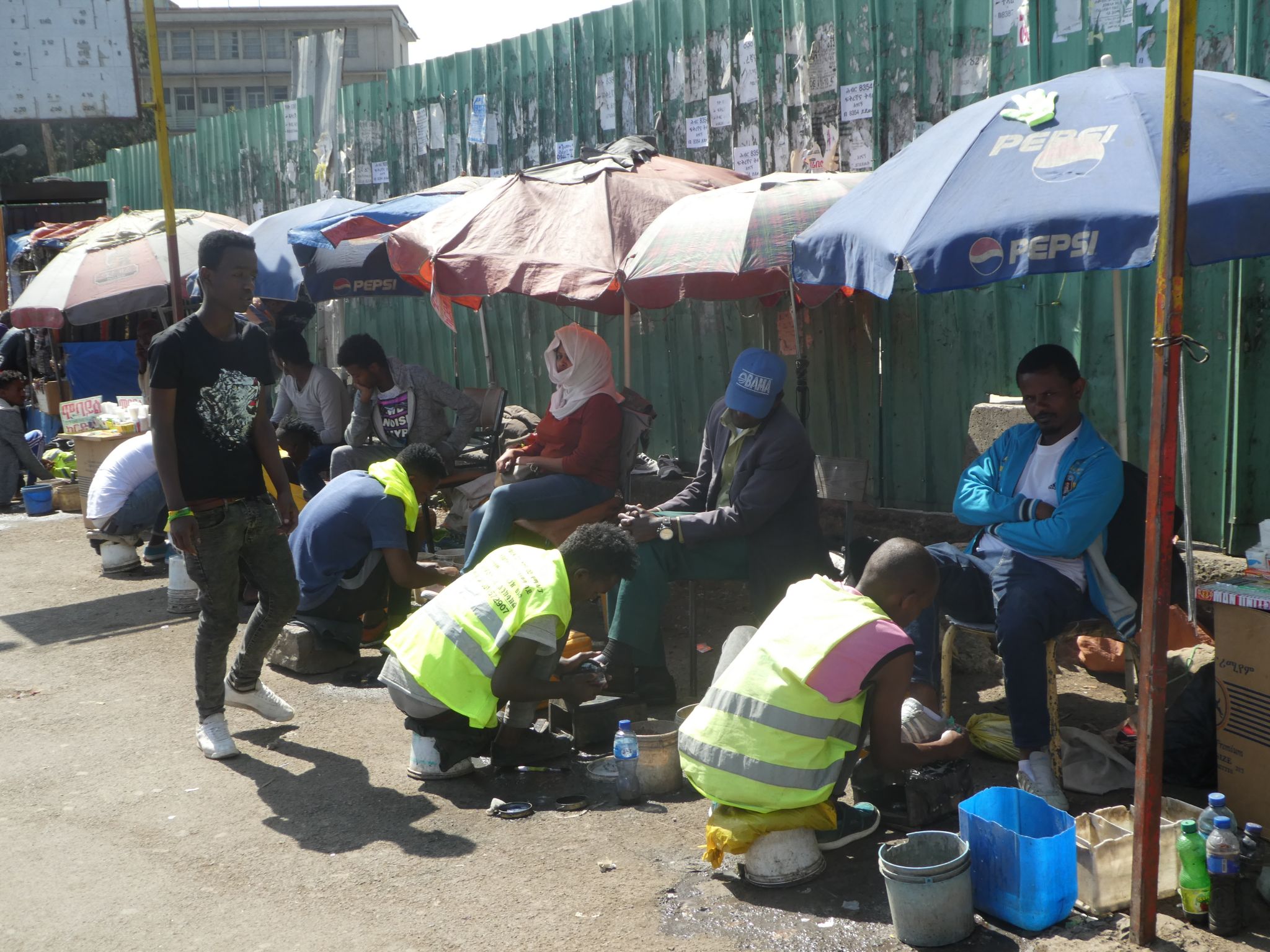 Addis is more of a transit point than a tourist destination, but there’s a few notables.  Two famous females, born more than 3 million years apart, are resting here.

The first is Lucy, whose fossilised skeleton was found in the Afar region of northern Ethiopia in 1974.  She was named after the Beatles hit, Lucy in the Sky with Diamonds, which was playing in the palaeontologists’ camp at the time.  Her discovery was a sensation.  She was a new species, the so-called ‘missing link’ in Darwin’s theory of evolution.

Lucy lived about 3.2 million years ago.  She stood about 1.1 metres tall and probably weighed about 25kg.  A tiny lady.  She had a small skull, suggesting a brain size similar to those of her chimpanzee-like predecessors, but she walked upright.  Her discovery debunked previous theories that our ancestors only learned to walk after they evolved bigger brains.  On our evolutionary journey, it seems we learned to walk before we learned to think.

Something about Lucy captured the imagination of the public and she became quite an international star.  She toured the US for six years before eventually being returned to Ethiopia where she resides in the National Museum. 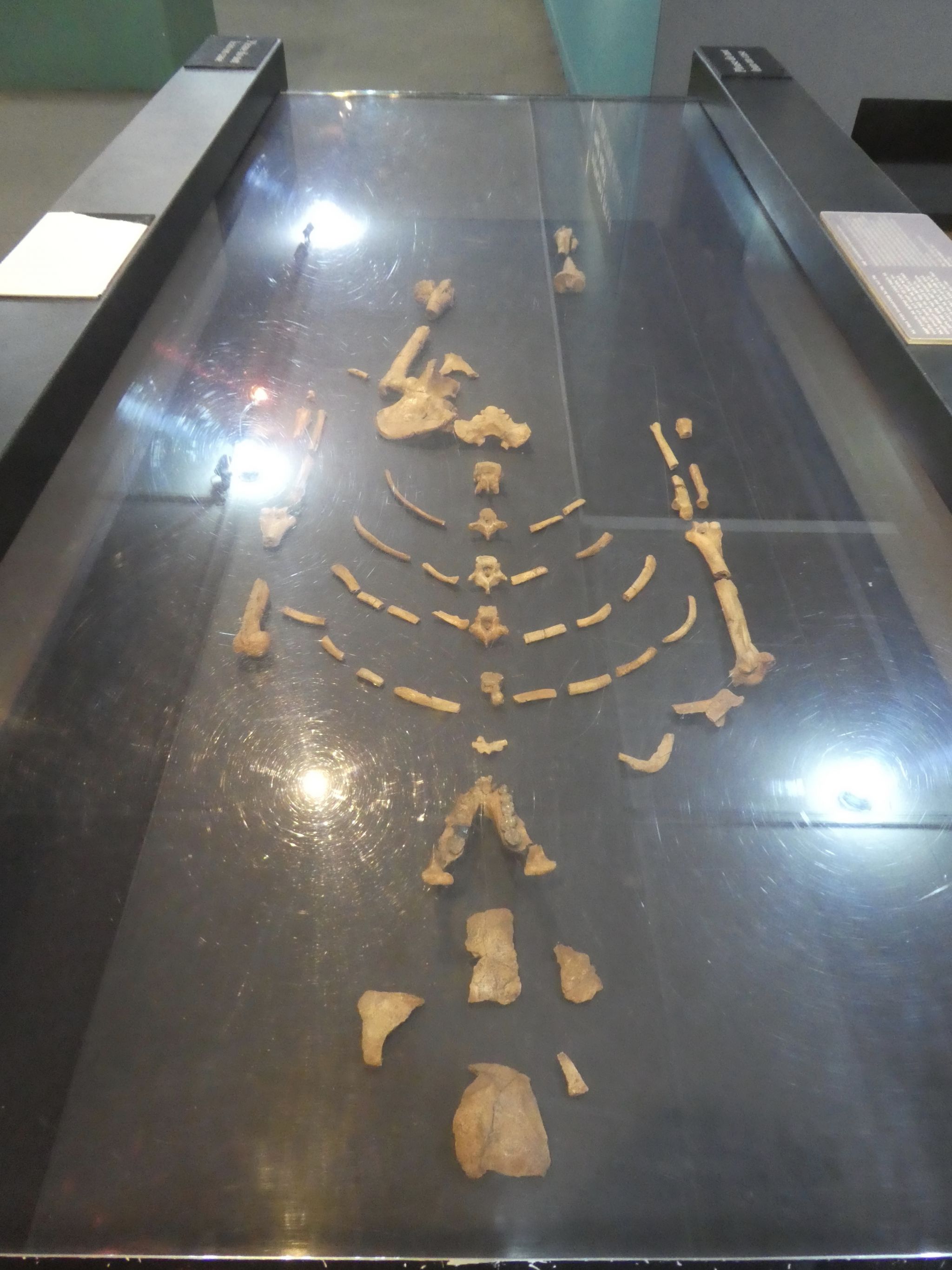 Alongside Lucy is lesser known Selam.  Found some years after Lucy, Selam is the earliest and most complete skeleton of a child human ancestor ever discovered.  She was about 3 years old when she died, more than 3.3 million years ago.  She actually pre-dates the more famous Lucy by about 150,000 years.  Cute, wasn’t she! 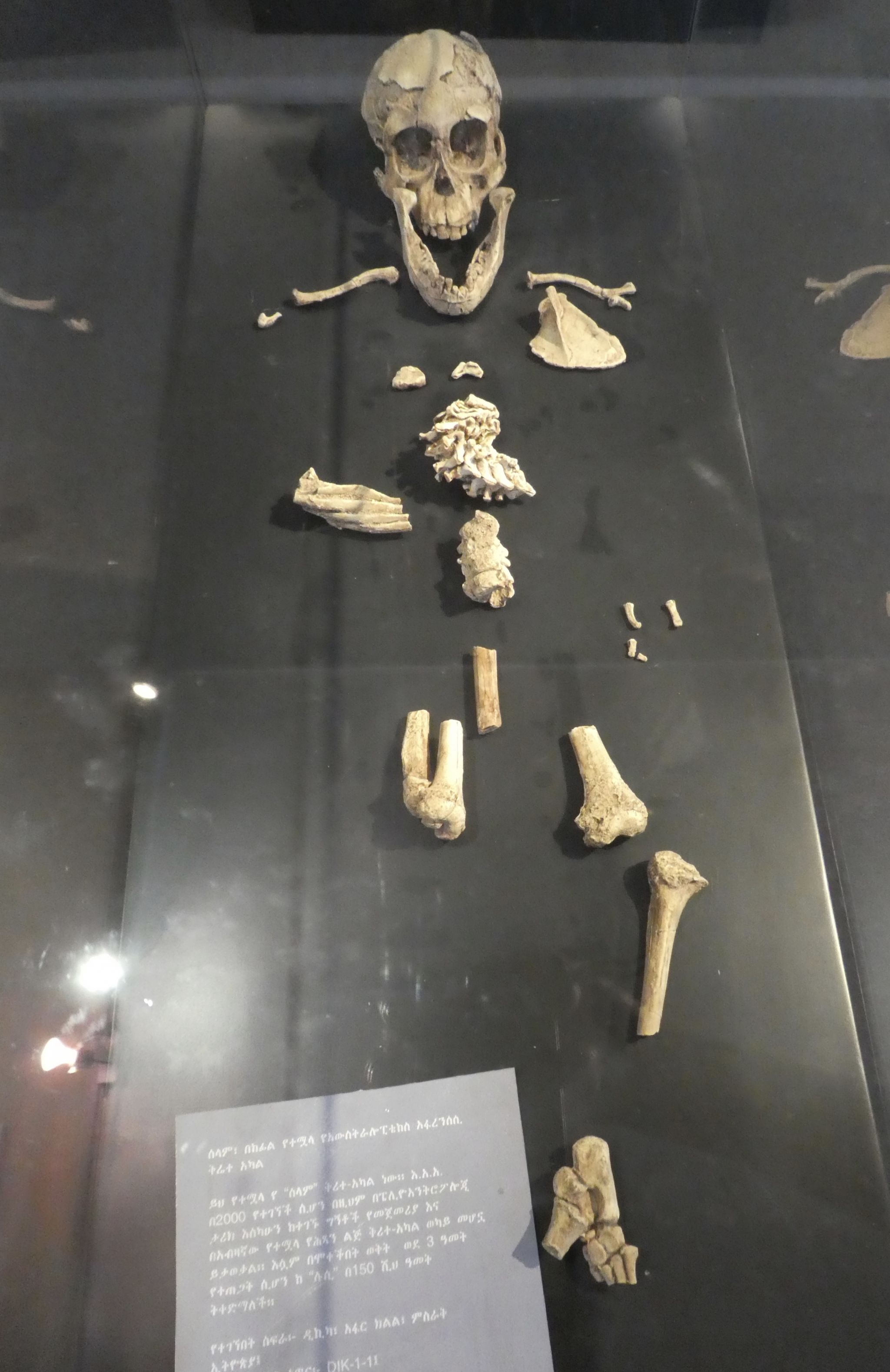 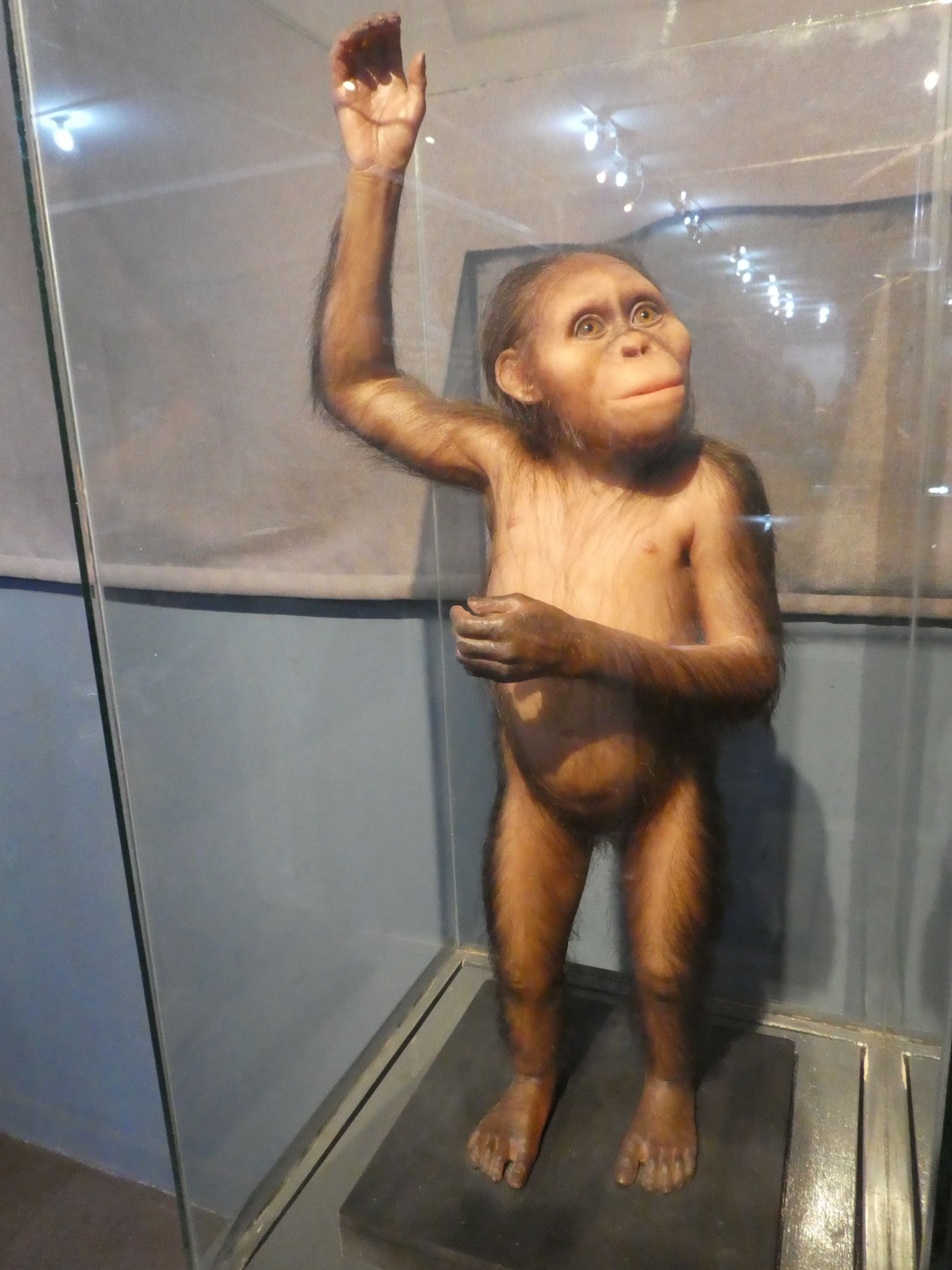 At the other end of the historical arc, the famous suffragette Sylvia Pankhurst is buried here.  In addition to her other causes, she opposed colonialism.  The father of her only child, Richard, was Italian but she opposed the Italian invasion of Ethiopia.  She published an Ethiopian newspaper from 1936 and became a friend and advisor to Haile Selassie.

She moved to Addis in 1956 and died there four years later.  At her funeral, Selassie named her an ‘honorary Ethiopian’.  She and her son are the only foreigners buried in the cemetery in front of Addis Ababa’s Holy Trinity Cathedral, in a section reserved for patriots of the Italian war. 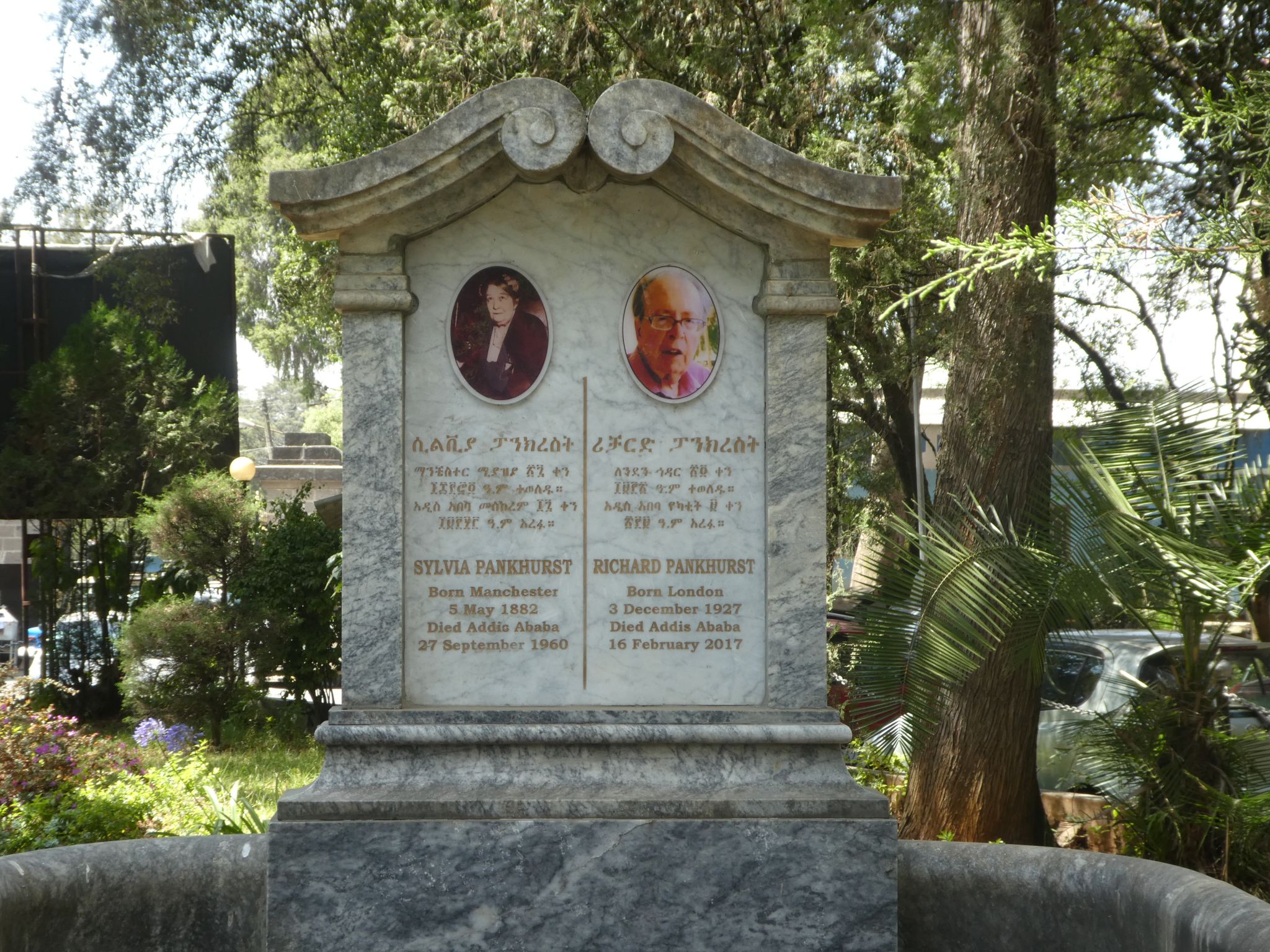 Emperor Selassie and his wife are entombed inside the cathedral. 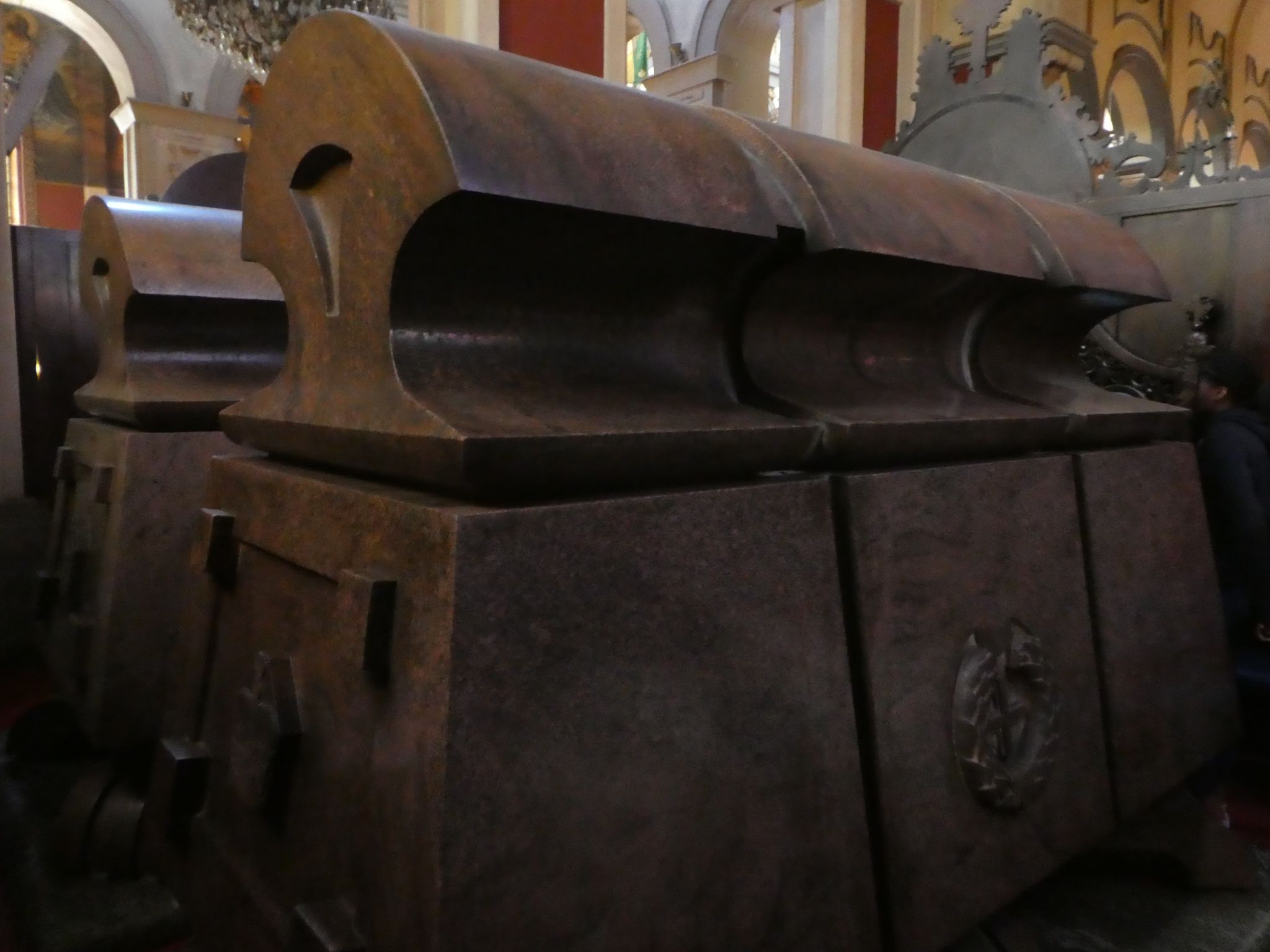 We also visited the Red Terror Martyrs Memorial Museum which tells the story of the years of bloody repression which followed Selassie’s removal in 1974 in a coup by a group from within the military known as the Derg.

The Derg’s economic and agricultural policies were an utter failure and money was poured into wars with neighbouring states instead of development.  In 1984-86, between 400,000 and 1 million people died in famine resulting from these failed policies and made worse by drought.

The Derg’s despotic leader Colonel Mengistu announced the Red Terror campaign, supposedly to suppress counter-revolutionaries but really just a campaign to terrorise the citizenry into submission.

More than 100,000 people were killed or disappeared during the Red Terror campaign.  One infamous incident resulted in more that 100 children aged between 11 and 13 being killed and dumped in the streets of Addis.

The excellent Red Terror Museum in Addis tells the story through photographs, exhibits and moving displays of the exhumed remains of some of those lost in the terror. 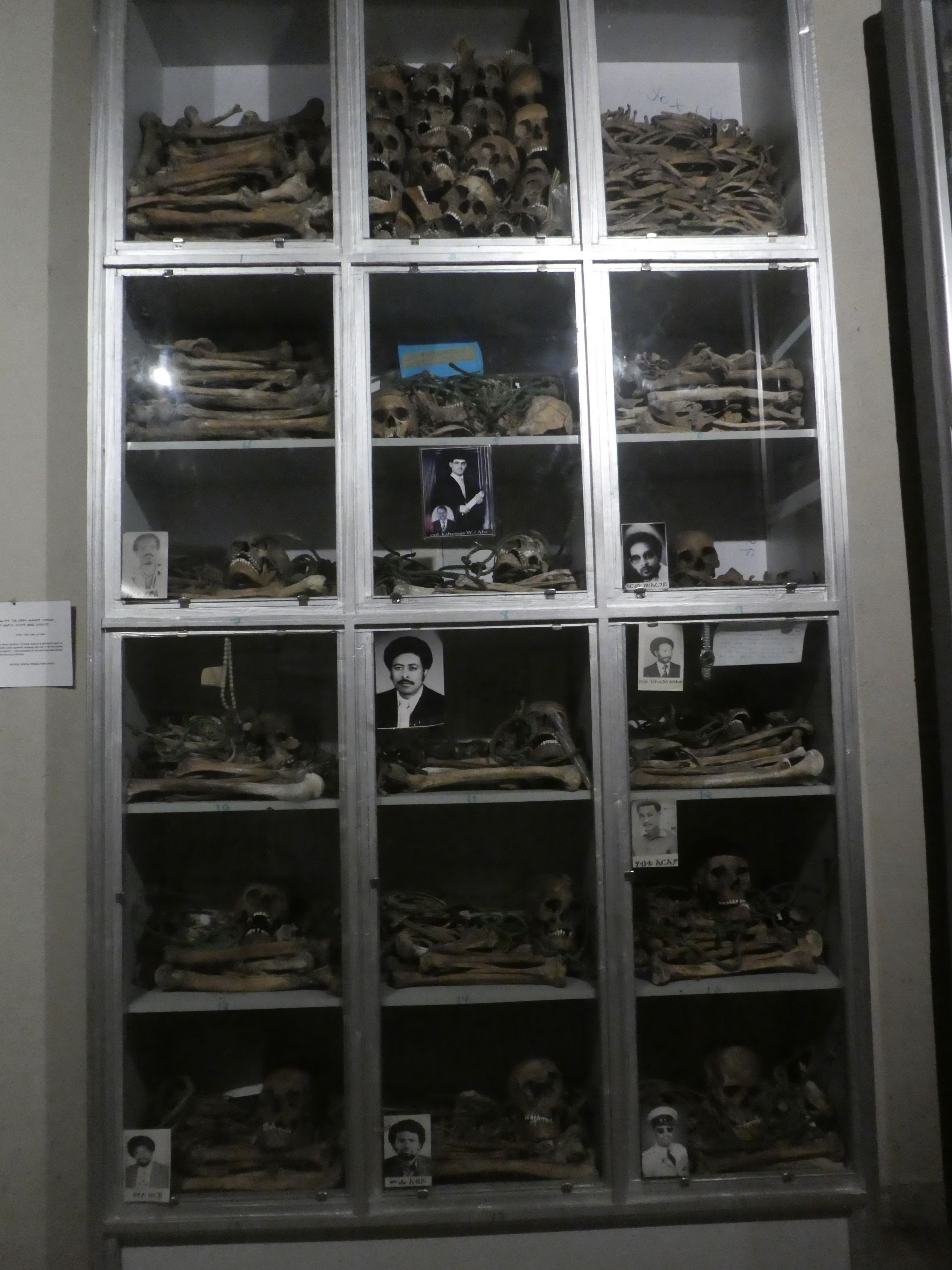 And so as not to end on a downer, a word about Ethiopian food and drinks.  We don’t usually blog about food, but Ethiopian cuisine is really unique, and we guess not well known outside the country except in places with a significant Ethiopian diaspora, so some might find this interesting.

Ethiopians love raw meat.  Kitfo is minced raw beef and gored gored is cubed raw beef.  Both are just eaten on their own.  We weren’t keen to indulge, especially after reading that if you eat a lot of it in Ethiopia you should get checked for tape worms when you get home.

There’s also lamb tibs, cooked small bits of lamb in a light sauce which in our experience were invariably as tough as an old goat.  We found out along the way that most of it is.  Goat, that is.

Happily, though the Ethiopian Orthodox Church, which means more than half the population, has over 200 ‘fasting’ days per year, when the faithful are not allowed to eat meat.  This has led to the development of really tasty vegetarian dishes based on lentils and chickpeas served with injera.

Injera is a crepe/pancake made from a cereal grain called tef which is grown widely here.  The ground grains are made into a sort-of sourdough batter and steamed into a pancake in one of these. 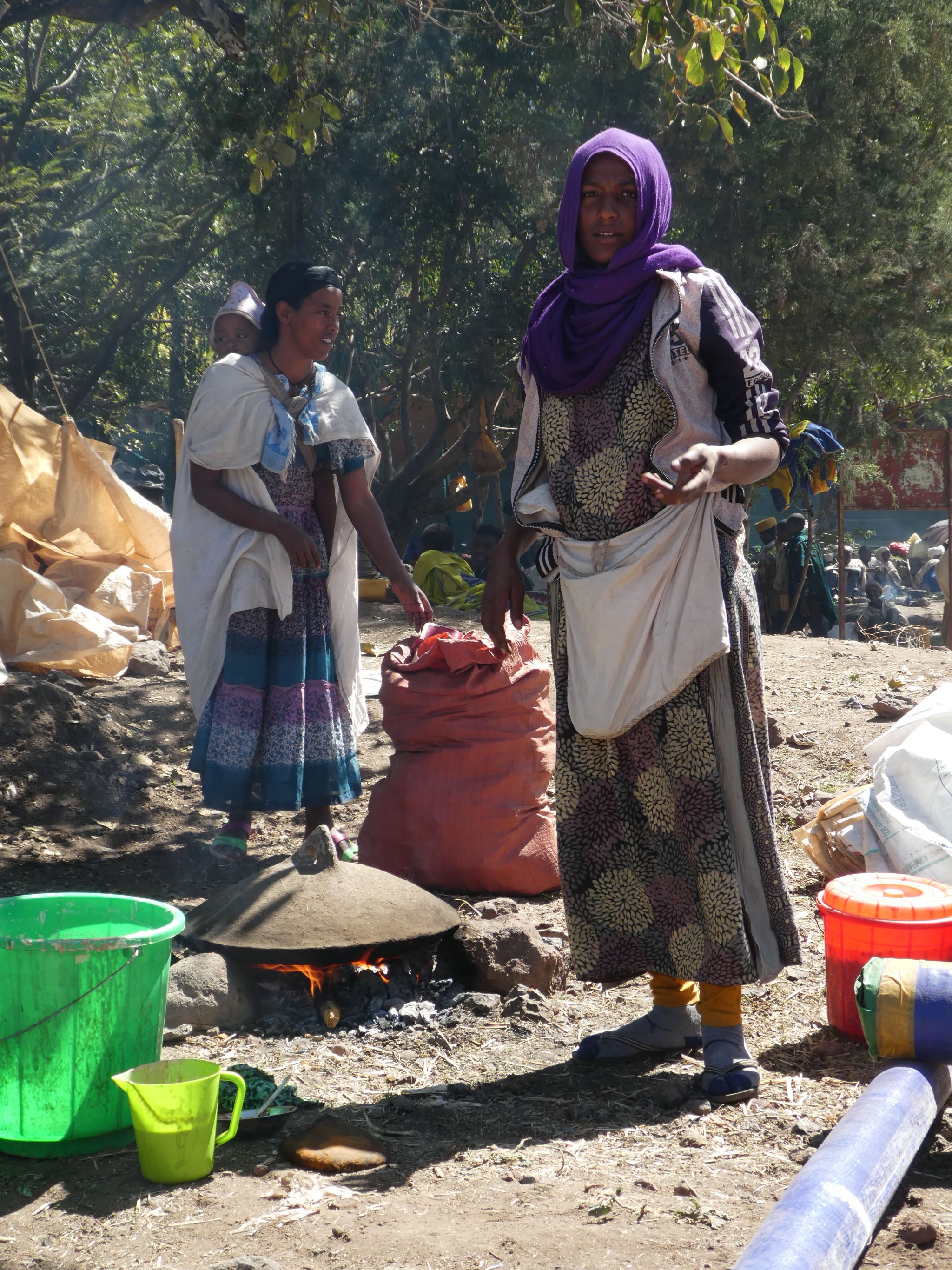 Injera is served with whatever stews etc on top and you tear off pieces of the injera, scoop up the topping and eat it.  Lonely Planet claims one American tourist thought it was a table cloth.  Not sure about that, and although it looks a lot like a kitchen sponge, it’s actually quite addictive.  Our favourite topping was shiro, a thick stew made from ground chickpeas, spices and chilli.  Yes, we know what it looks like, but trust us, it’s really tasty. 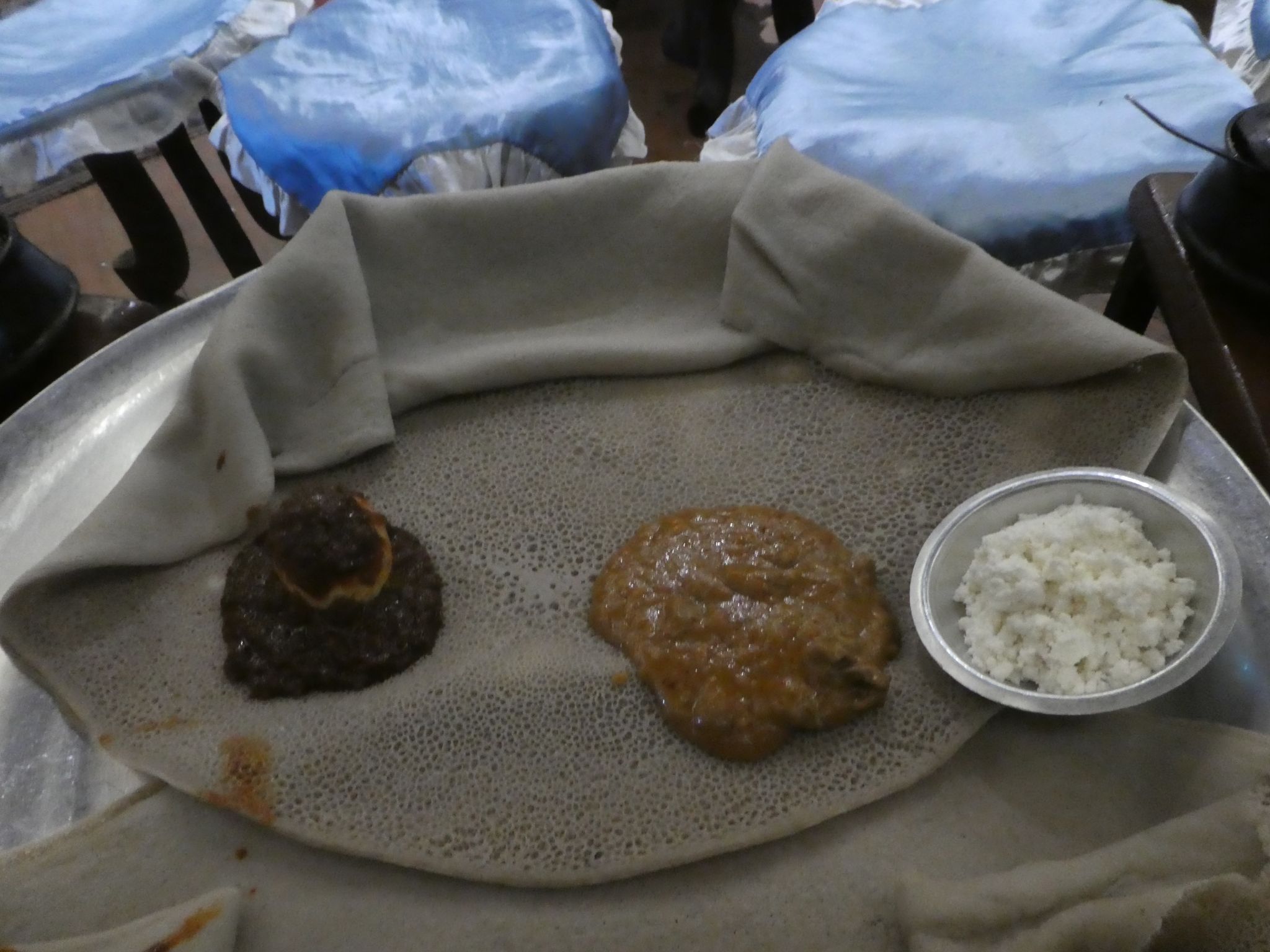 As for drinks, Ethiopia has quite a lively drinking culture, which was a big change after almost three months in Muslim-majority countries.  However, the local beverages are something of an, umm, acquired taste. 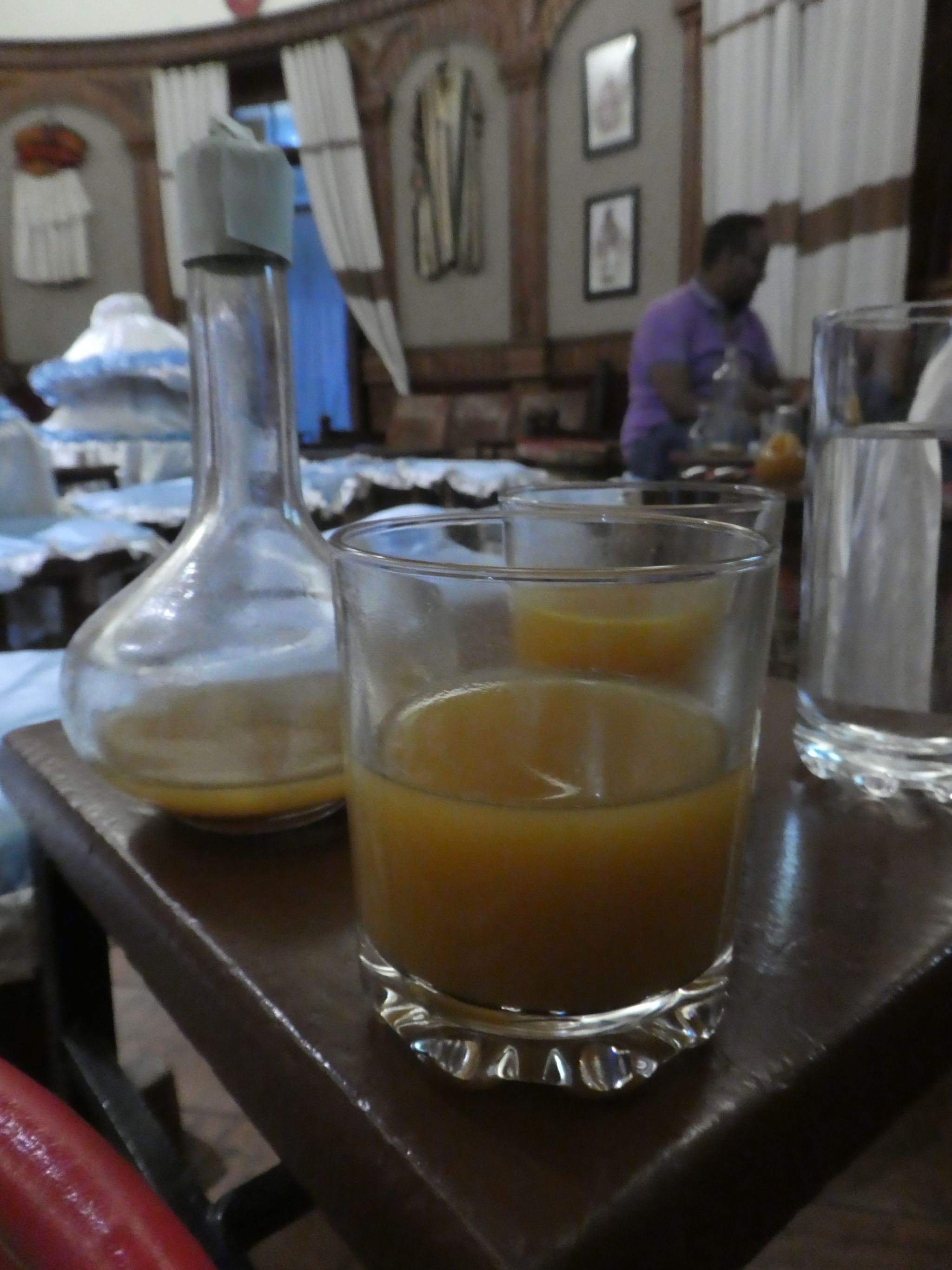 Ethiopian wine is also widely available, and there’s even locally made gin and ouzo.  More on that in a post on the Danikil Depression which is coming soon.