Legends say Christianity came to Ethiopia in 330CE when two shipwrecked boys were sold to King Ezana as slaves and promptly converted him.  The king made Christianity the state religion and by the mid 4th century the majority of the population was Christian.

When Islam came to North Africa in the 7th century, Ethiopia was the only region to remain predominantly non-Muslim.  Cut off from the rest of Christiandom, the Ethiopian church developed practices and traditions uniquely its own.

And in the 12th and 13th centuries, Christians were persecuted, despite being the majority religion.  Here is where Lalibela comes in.

Lalibela is a nondescript town, once just a village of traditional huts known as tukuls. 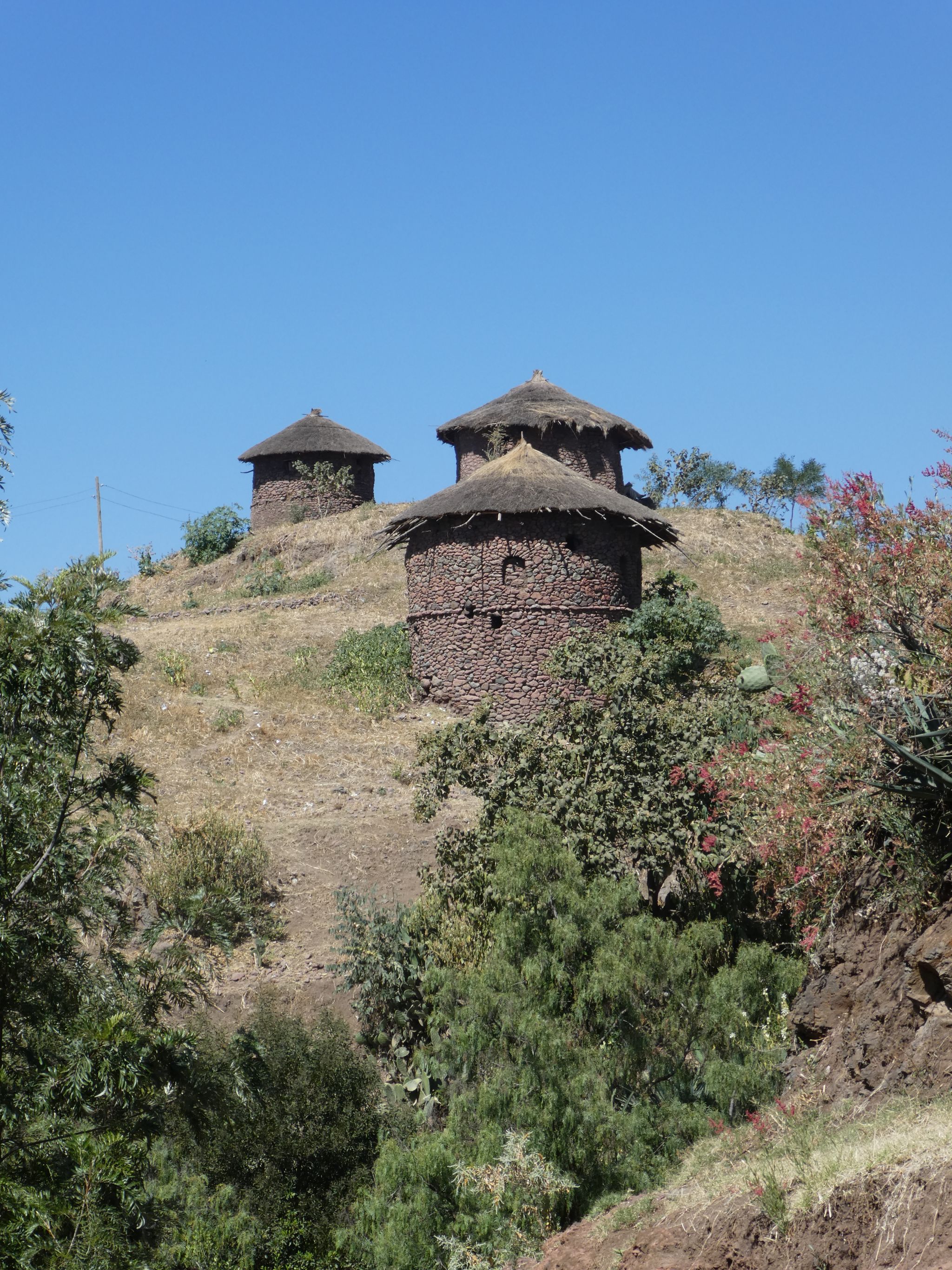 But with Muslim domination making travel to the real Jerusalem too dangerous, resident King Lalibela set out to build a ‘New Jerusalem’, a safe substitute place of pilgrimage for Ethiopian Christians.

Instead of just building a bunch of churches in the usual fashion, he decided it would be a great idea to cut them out of rock. Not sure why, although it’s true to say that there is a lot of rock in this area.

A monolithic church is one cut from a single piece of rock, and under King Lalibela’s watchful eye, 11 such churches were hewn out here. After chiselling down to shape out a church-sized block, each block was then hollowed out, forming interior rooms linked by doorways and arches, columns etc. Some are two storey, with upper level galleries hewn from the stone.

These churches are not cut into a hillside like rock temples we have seen in India and other places. The makers literally chiselled down into an enormous rock, hollowed out a space around a great lump, then chiselled into the rock to create the church.

The most impressive is the Church of Saint George. 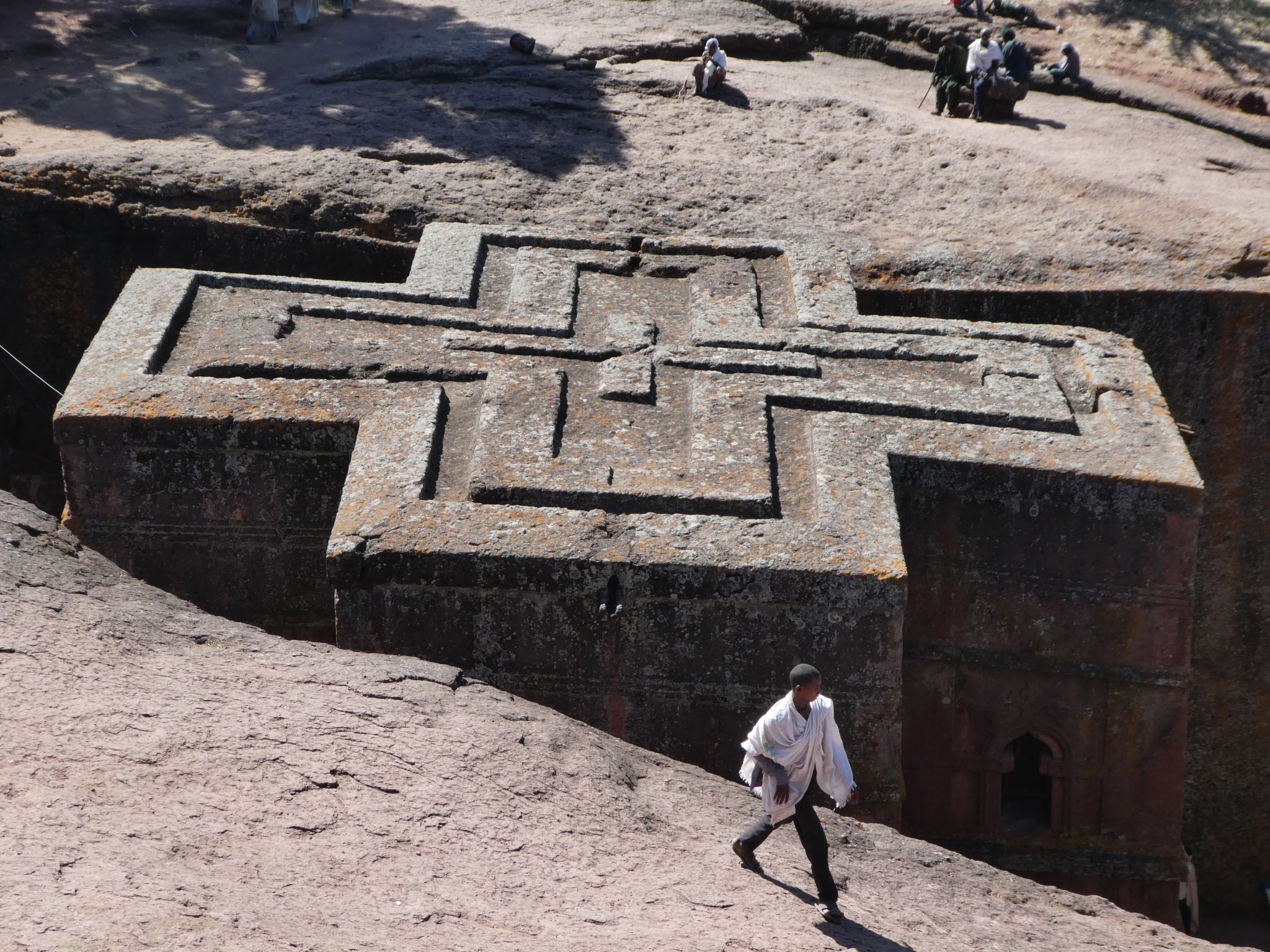 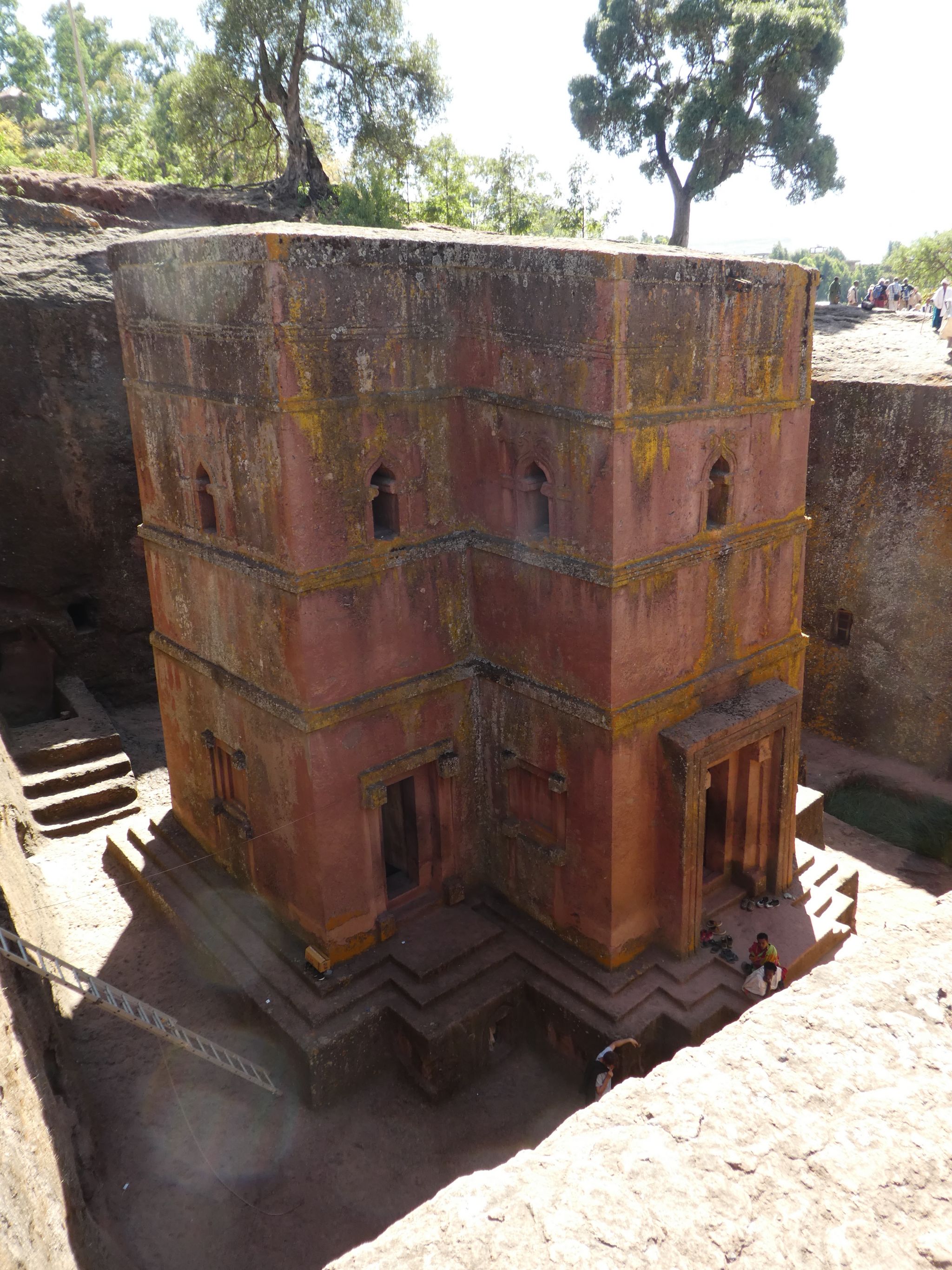 The other ten churches are in two clusters of five.  They were built in surprisingly short time.   All done in less than 10 years total.  Locals actually believe men worked on the churches through the day, and then angels worked on them all night. 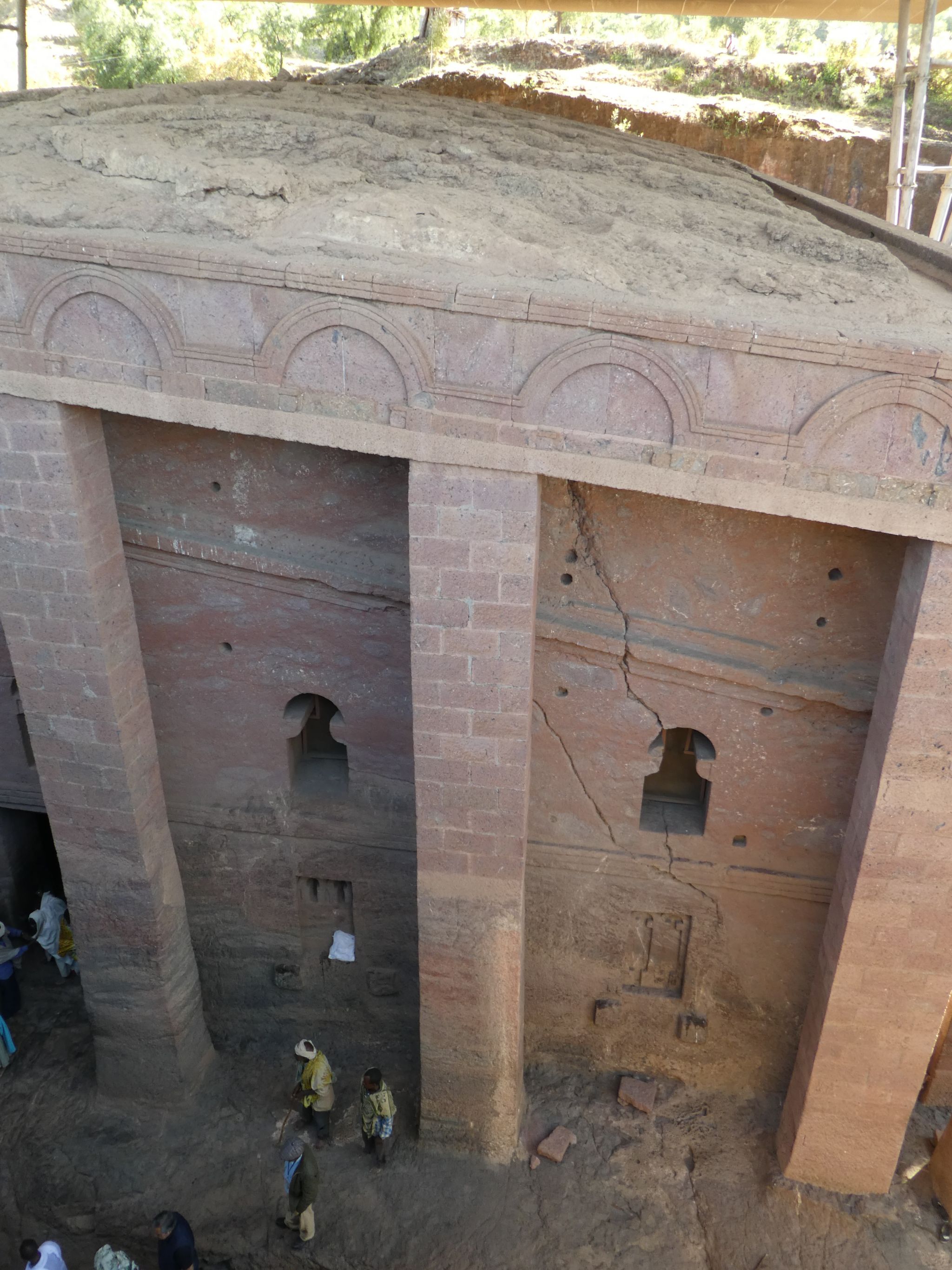 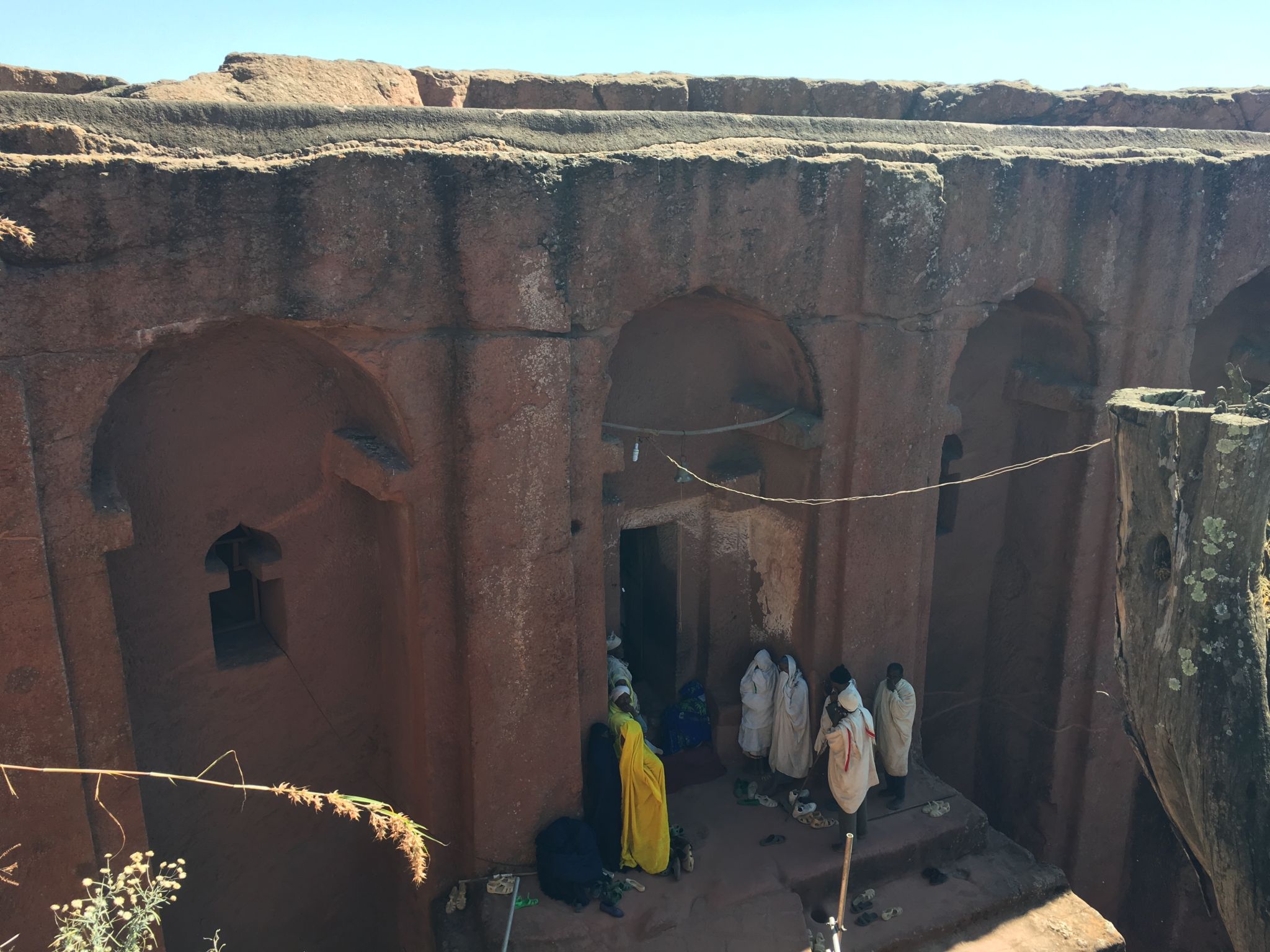 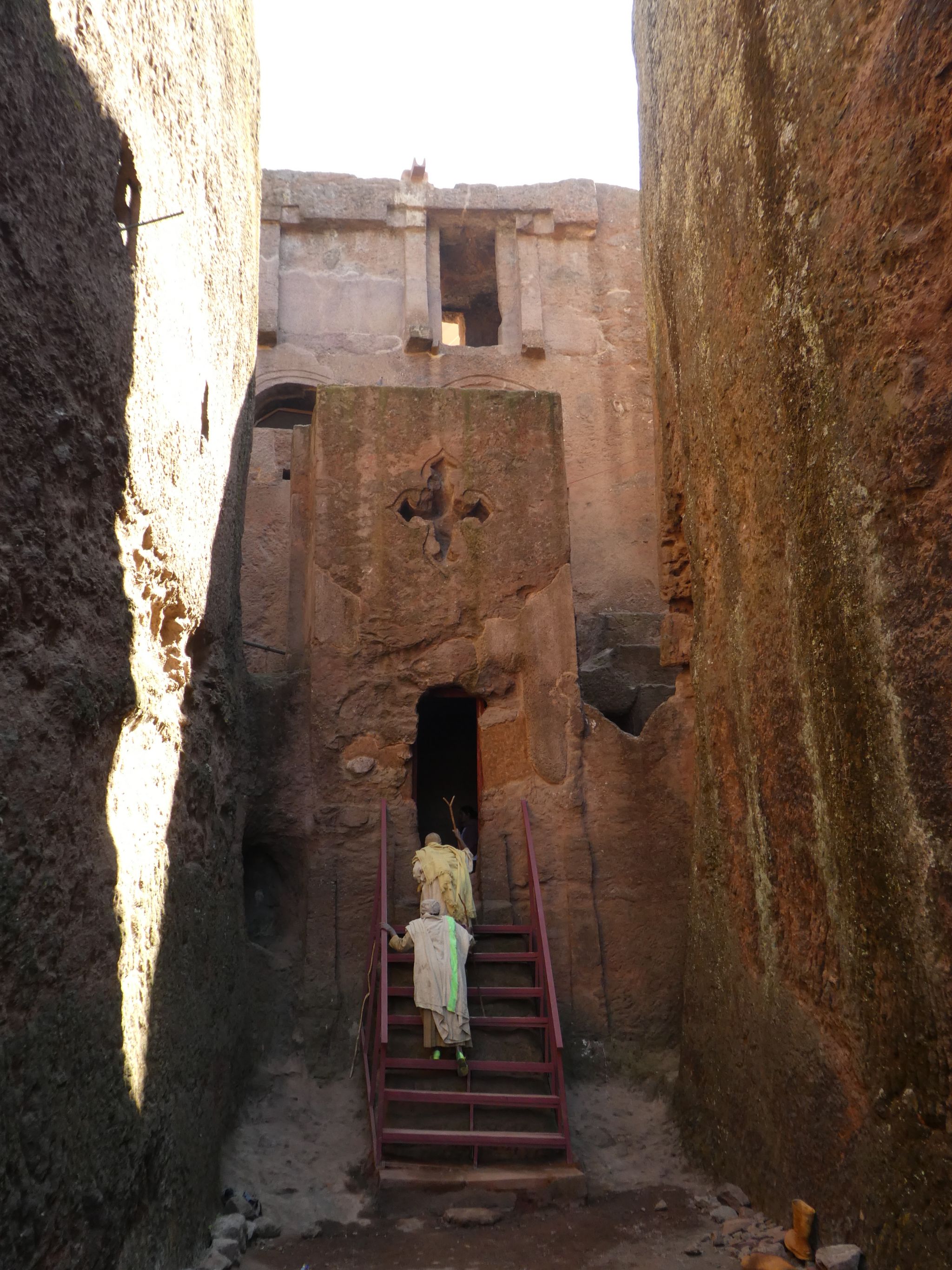 UNESCO has committed an atrocity in building canopies over the main churches.  Ok, maybe they protect them from the weather, but they also cast shadows and prevent you getting a proper perspective from above.  The churches are still incredible, but you wonder if UNESCO couldn’t have done something a bit less intrusive. 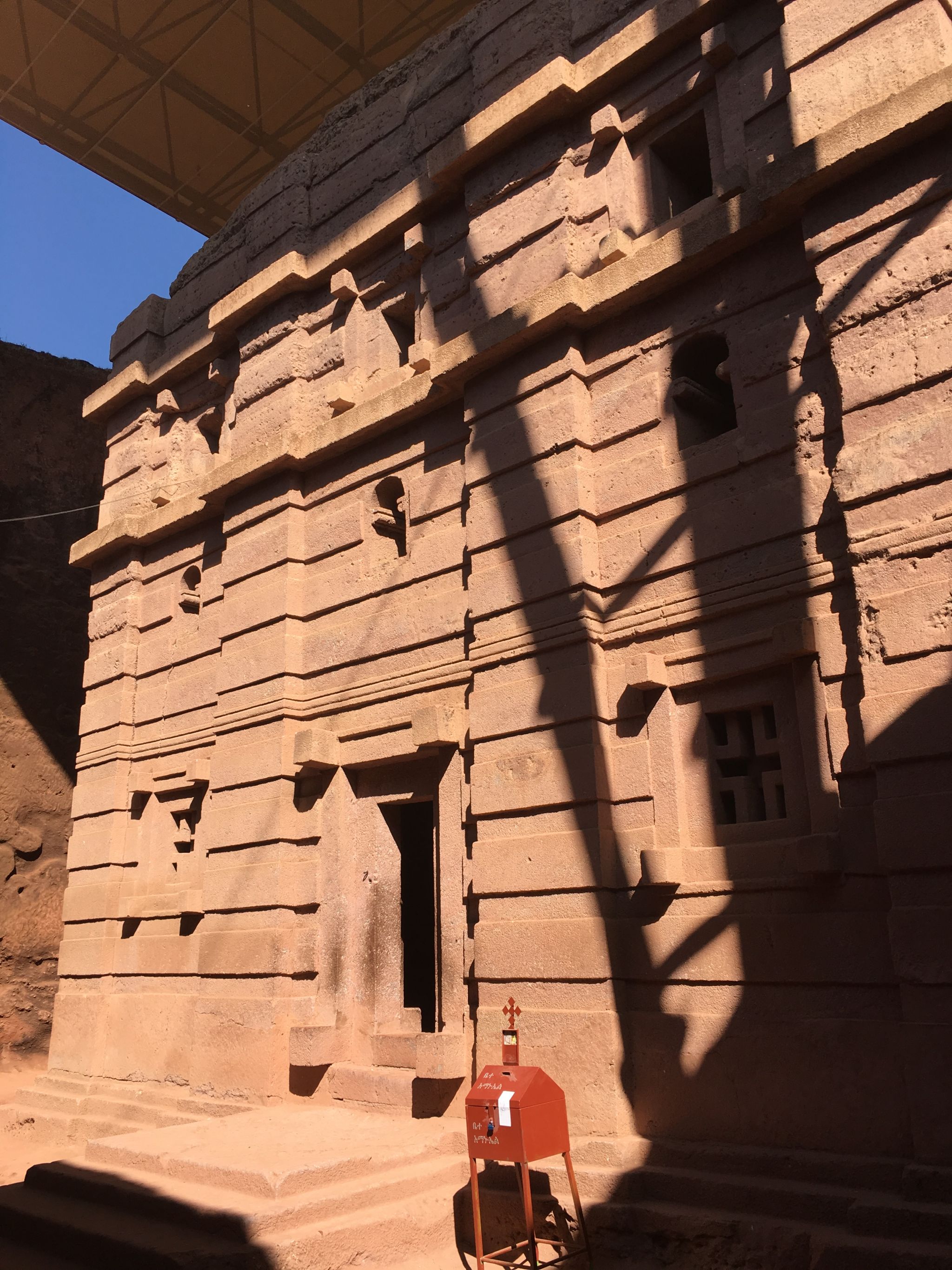 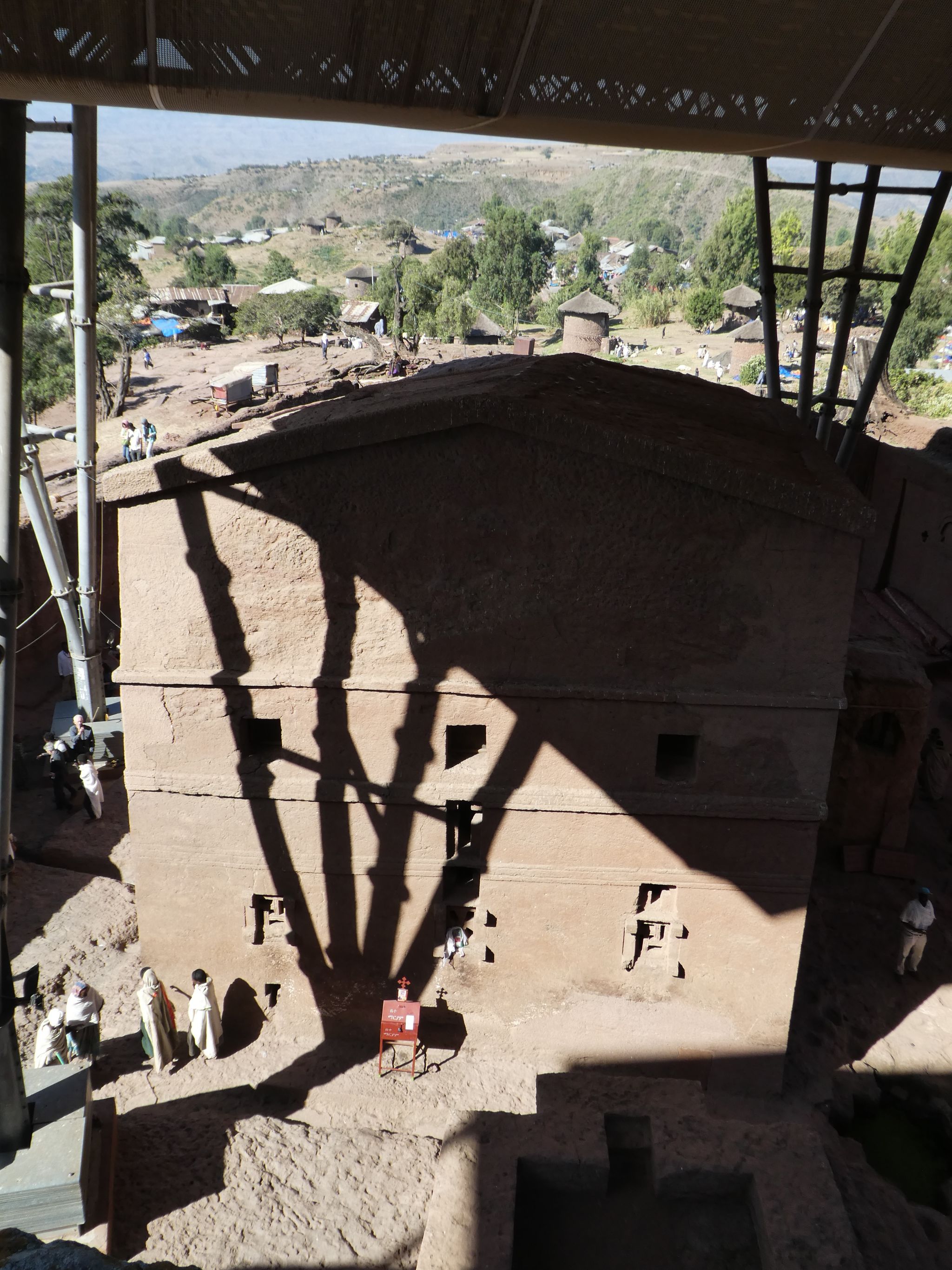 In each cluster the churches are close together or linked by ceremonial passages cut through the rock. 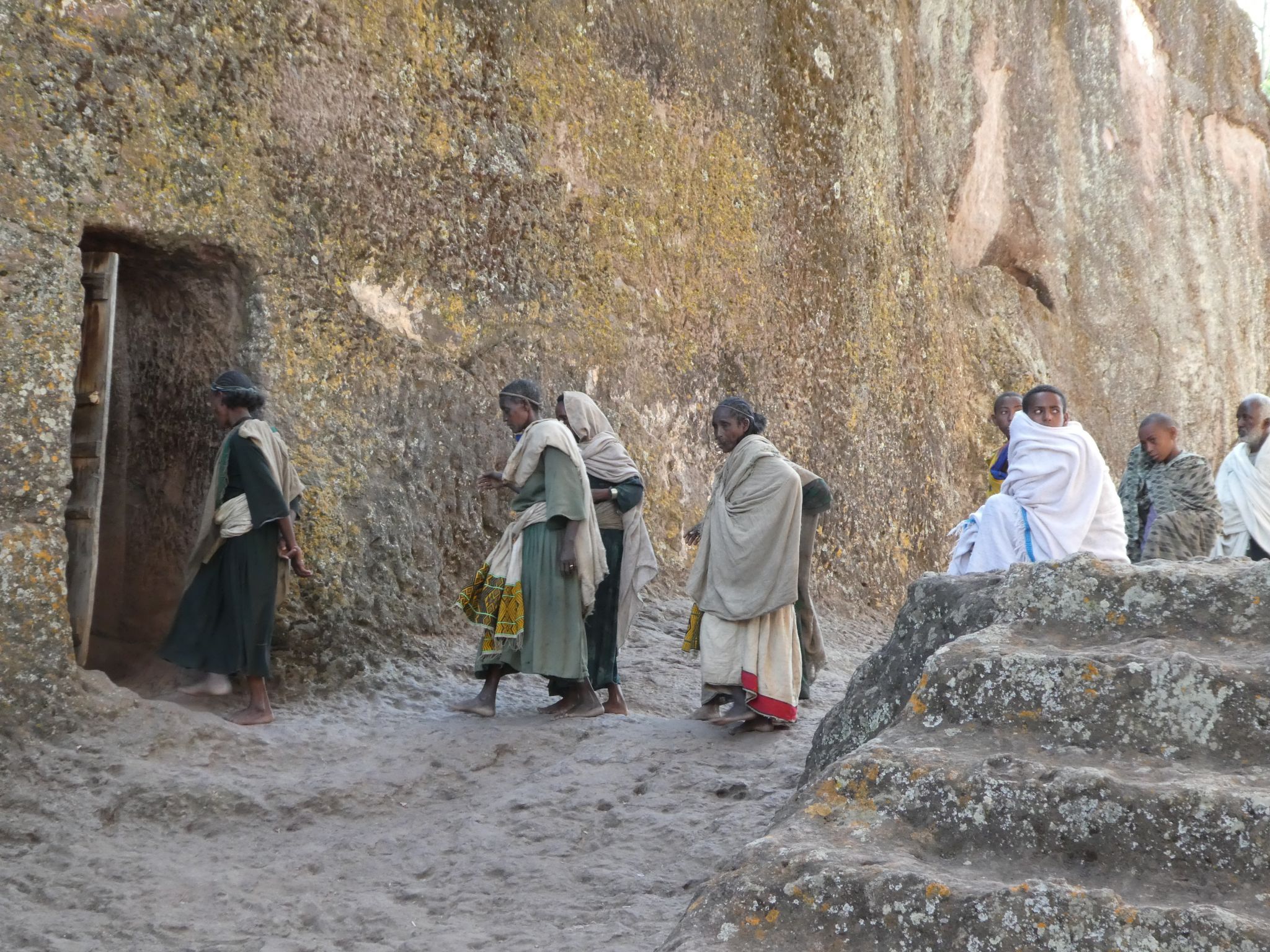 In the ‘cliffs’ that surround the churches, hermit caves and catacombs were cut.  In this alcove are the bones of a pilgrim who died here in the recent past and has not been moved.

The art is typical of what we saw in churches elsewhere in Ethiopia and is adorable. 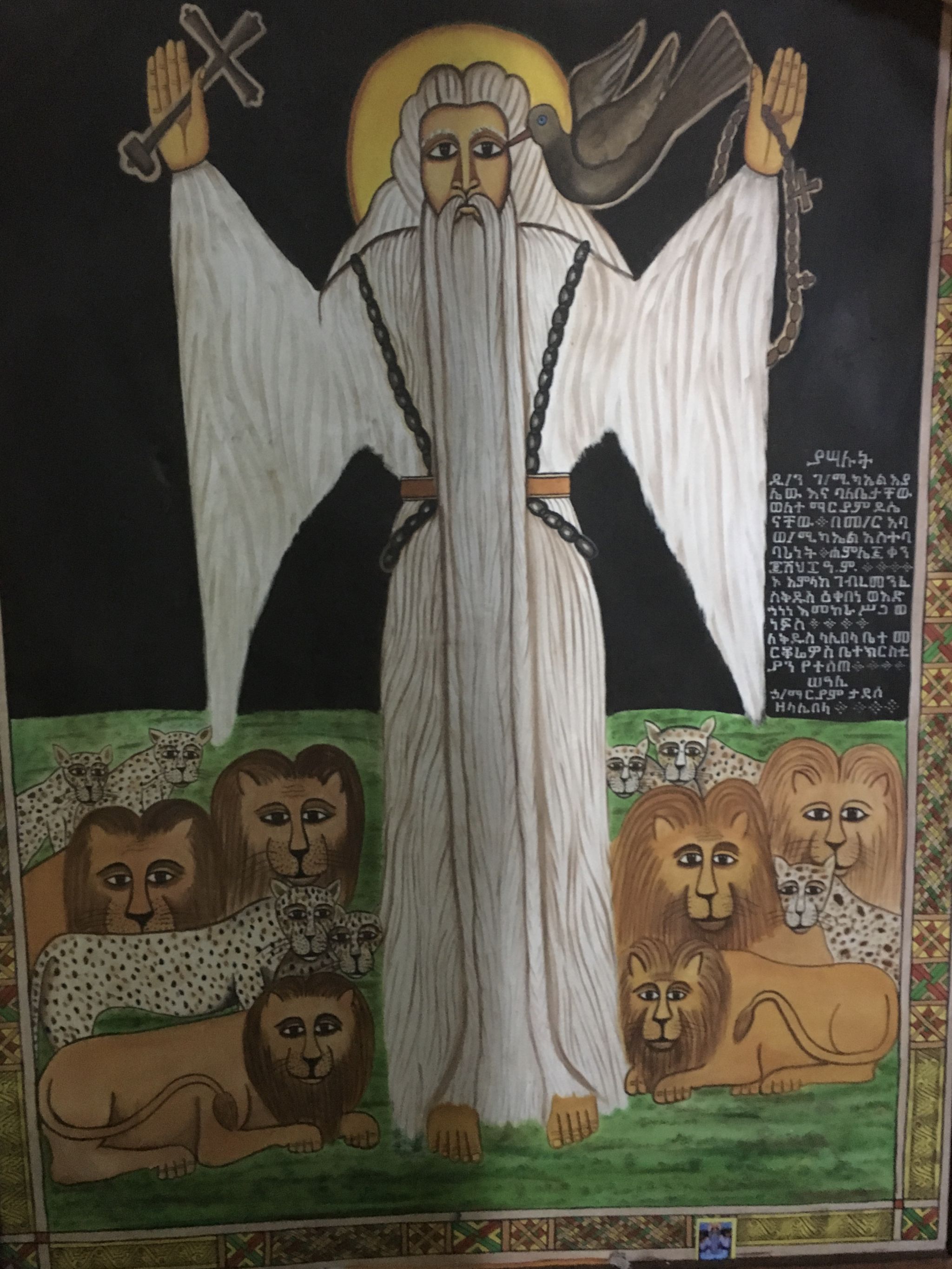 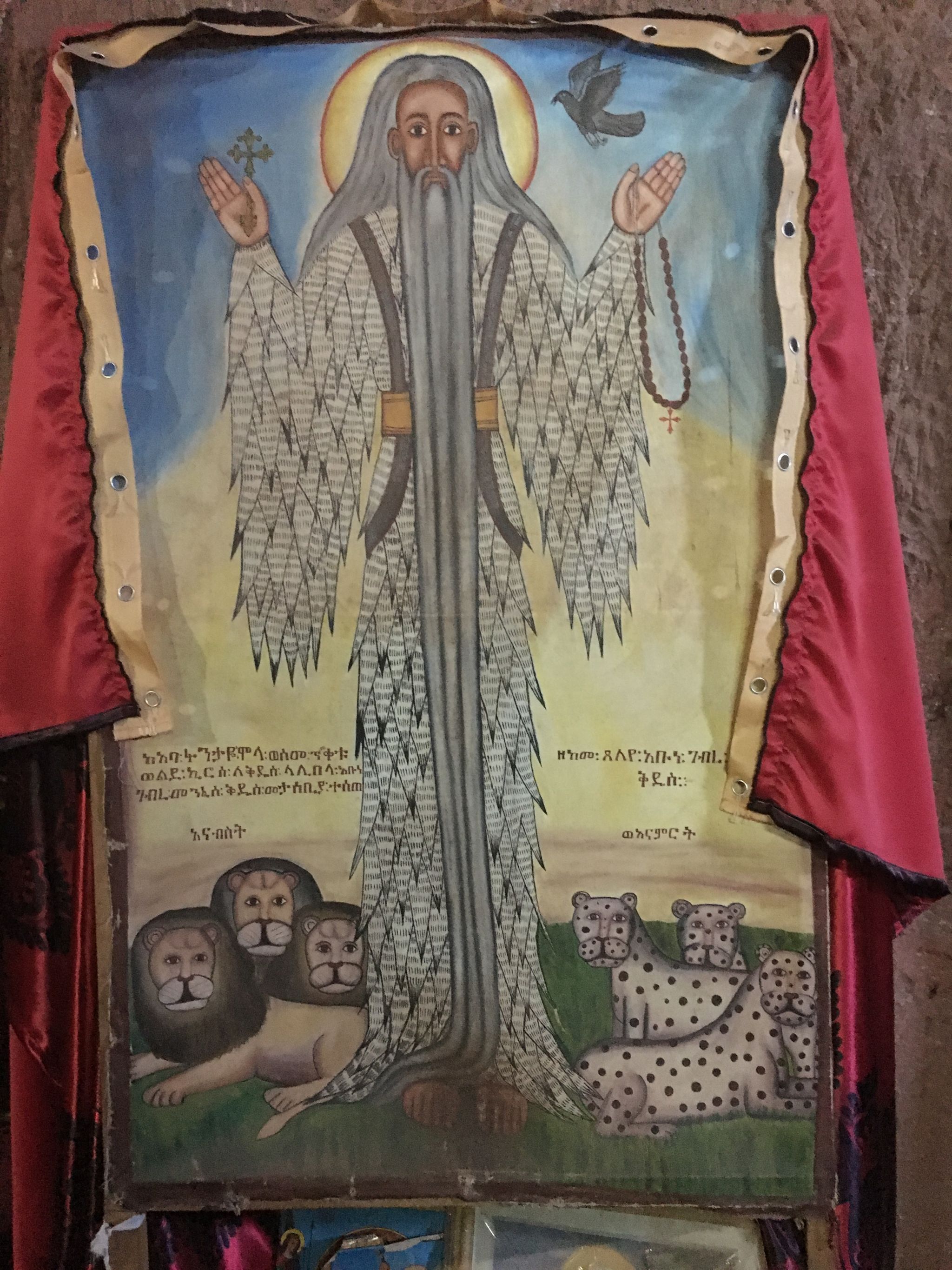 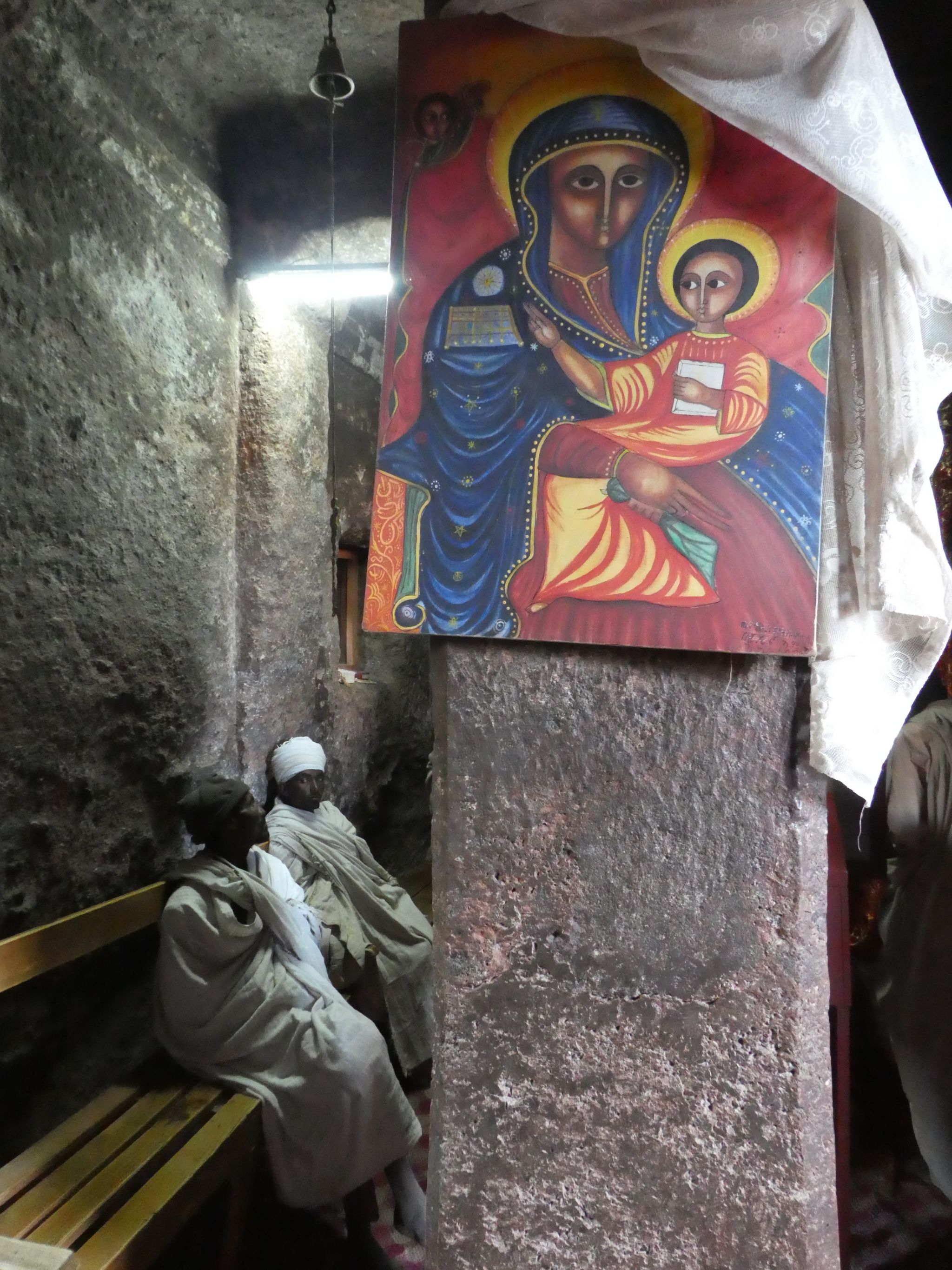 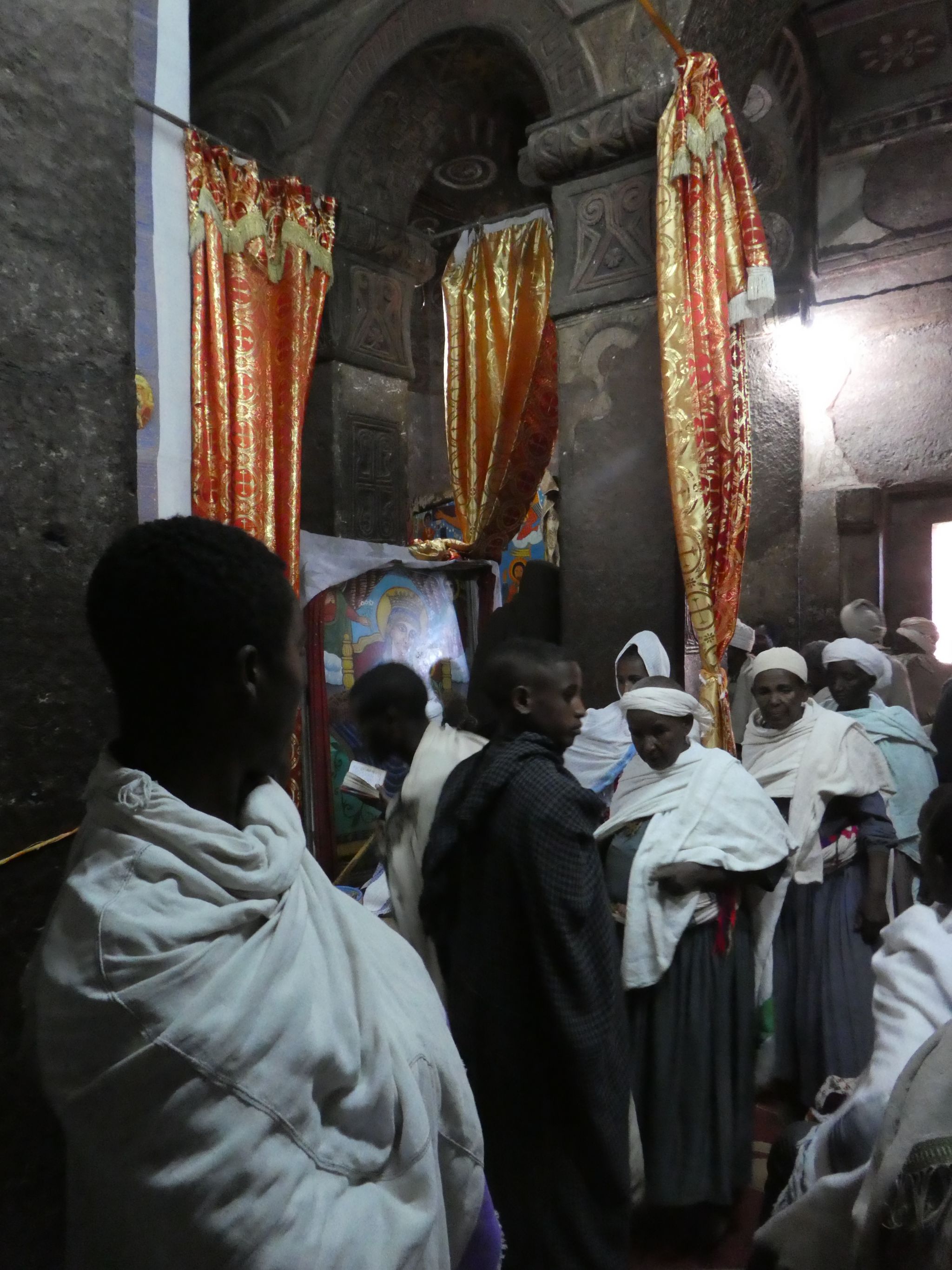 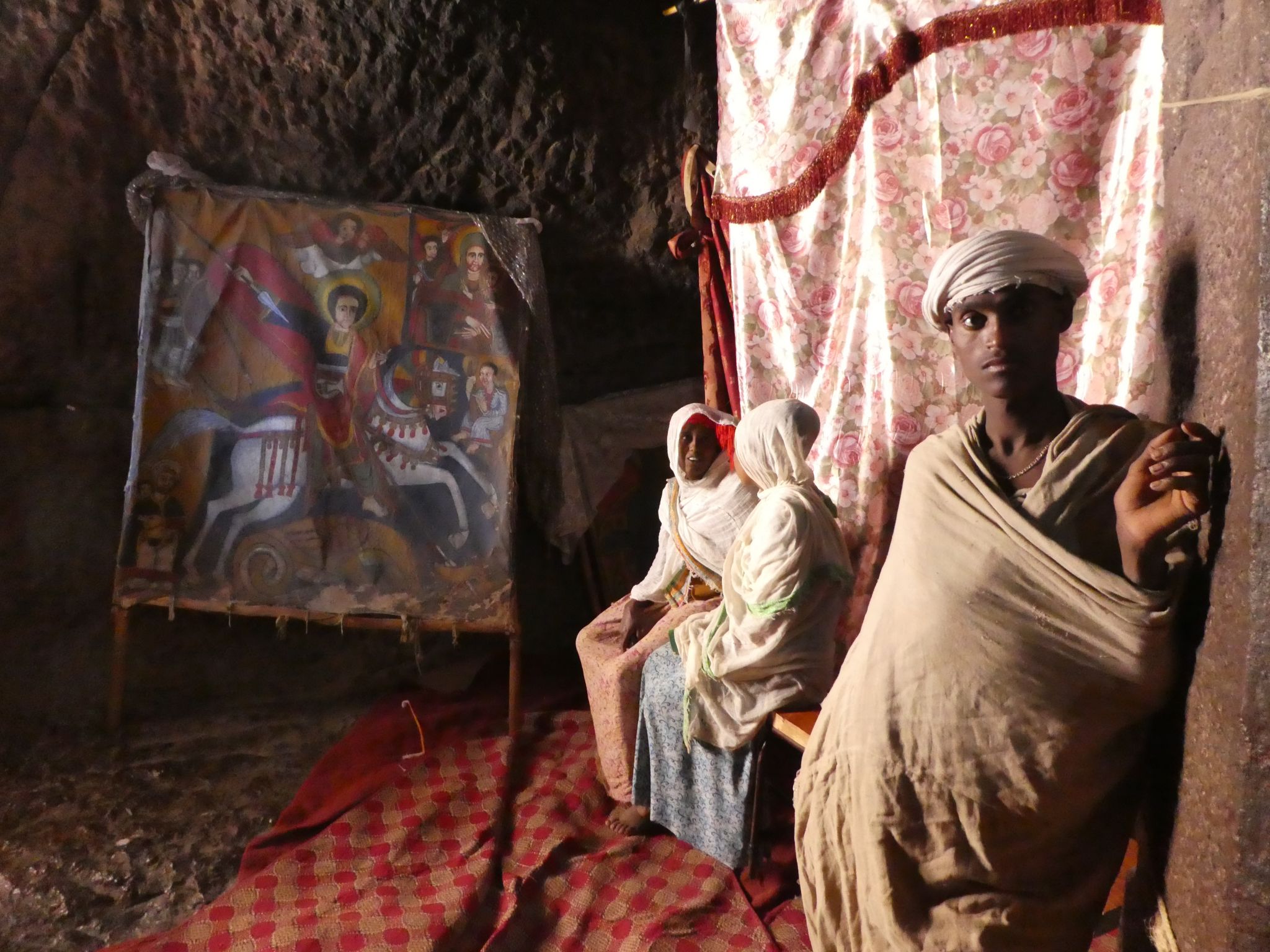 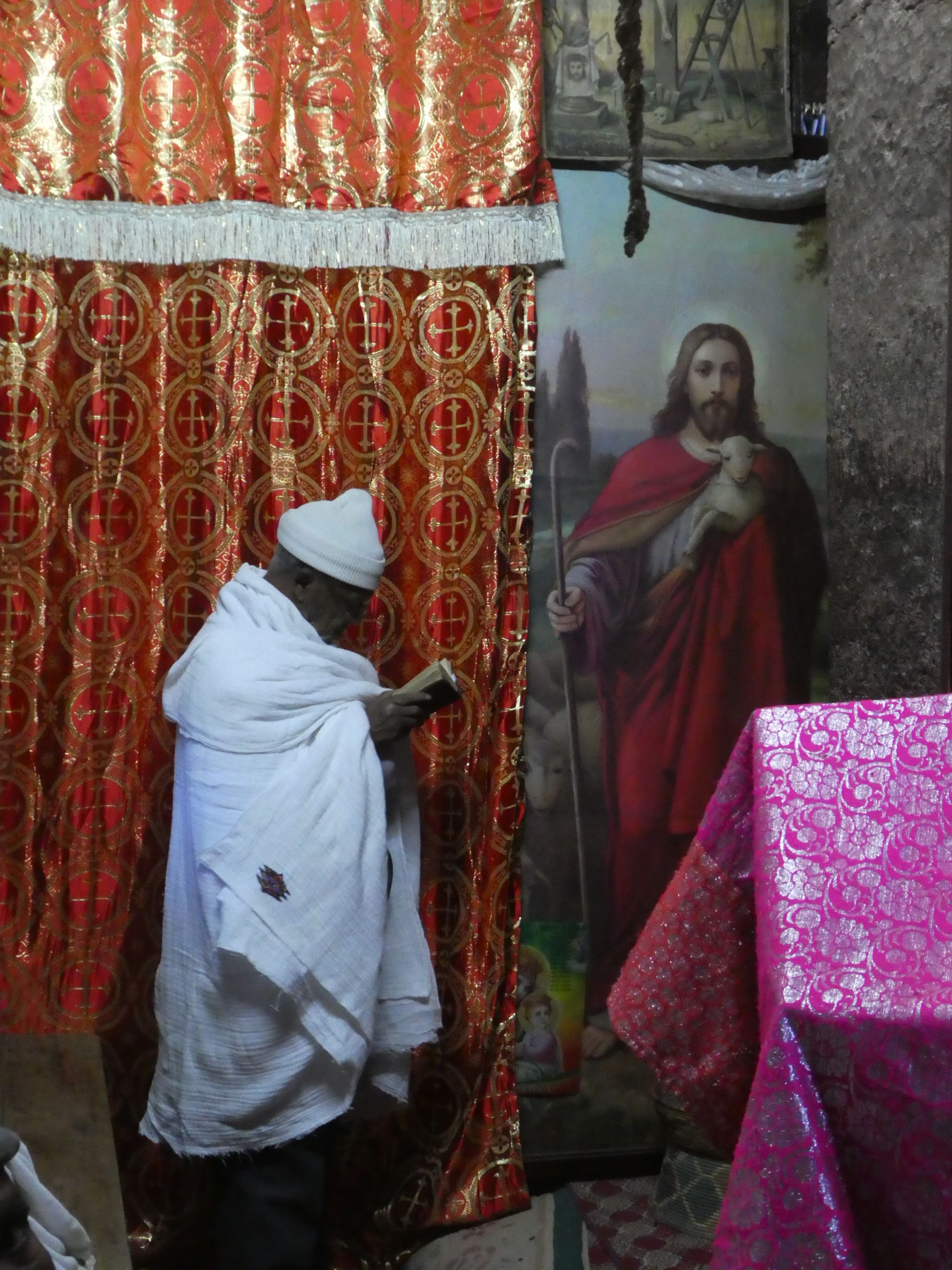 Pilgrims flock to Lalibela for Christmas, which in the Ethiopian Orthodox Church falls on either 6 or 7 January each year.  By Christmas Day an estimated 50,000 pilgrims will be here.

There was already a large number when we were there.  The town cannot accommodate them, so they sleep on the rocks around the churches, in the parks behind the street markets, anywhere there is space. 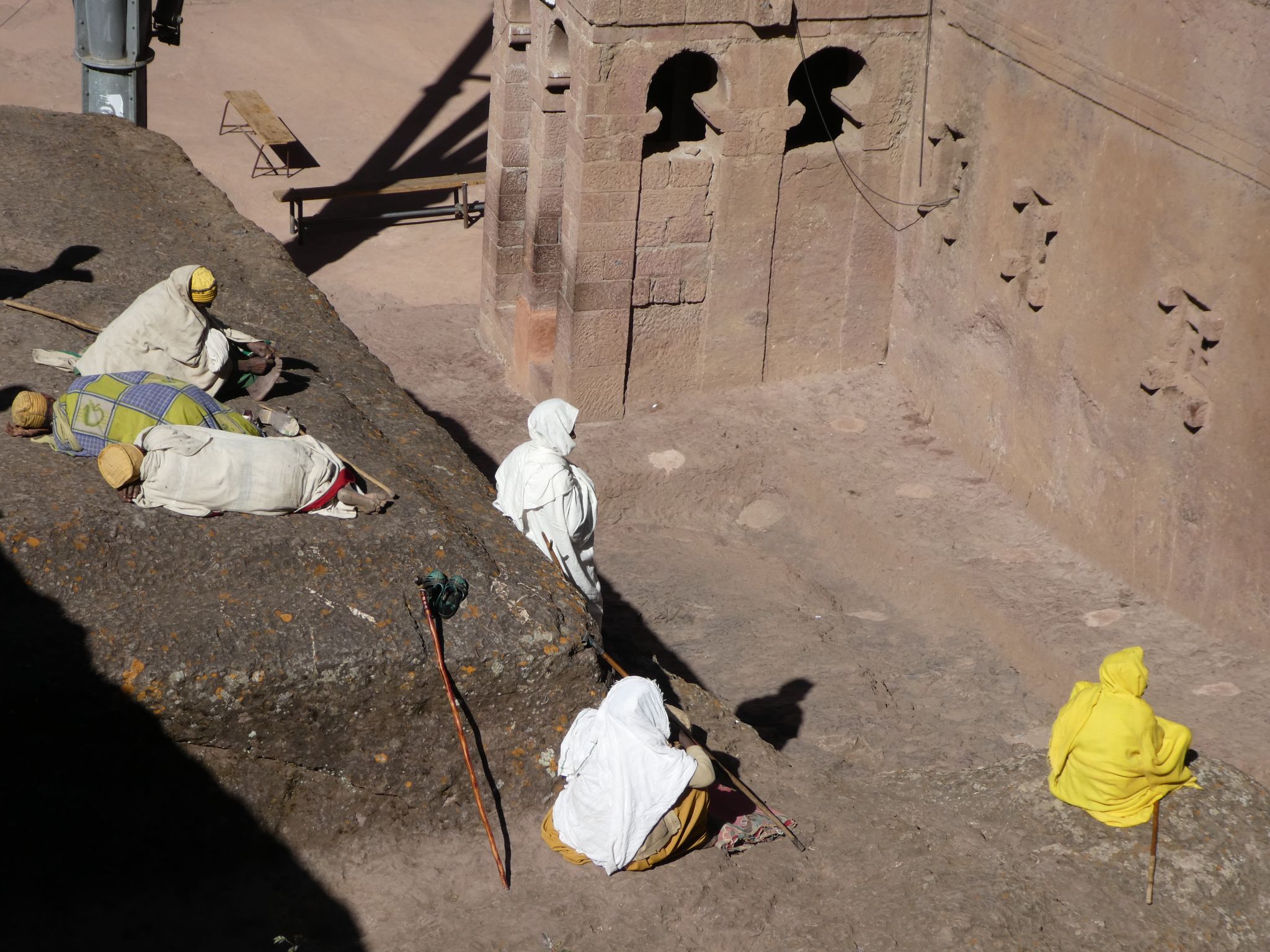 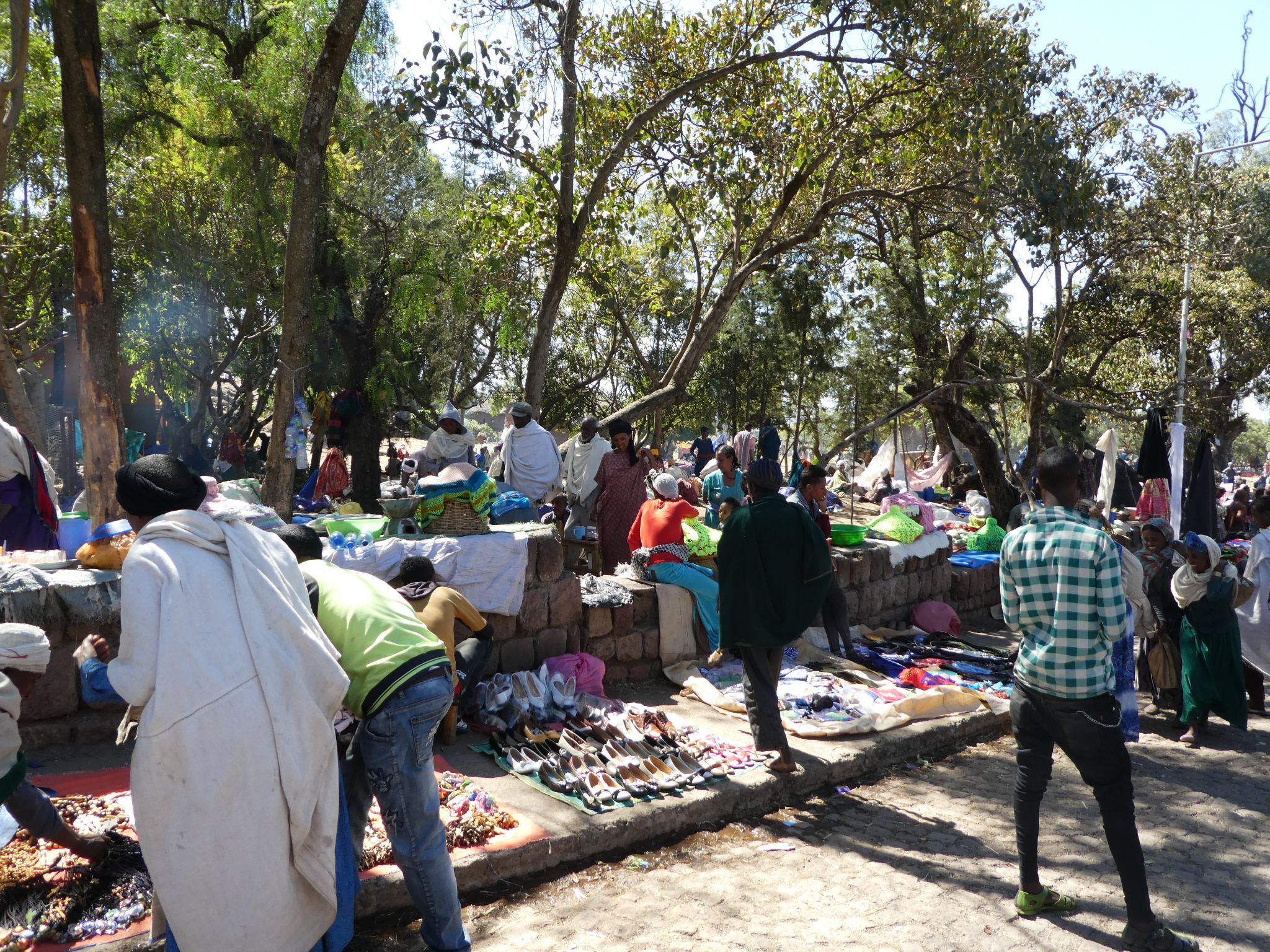 Even now, a week away from Christmas, it is standing room only outside some churches. 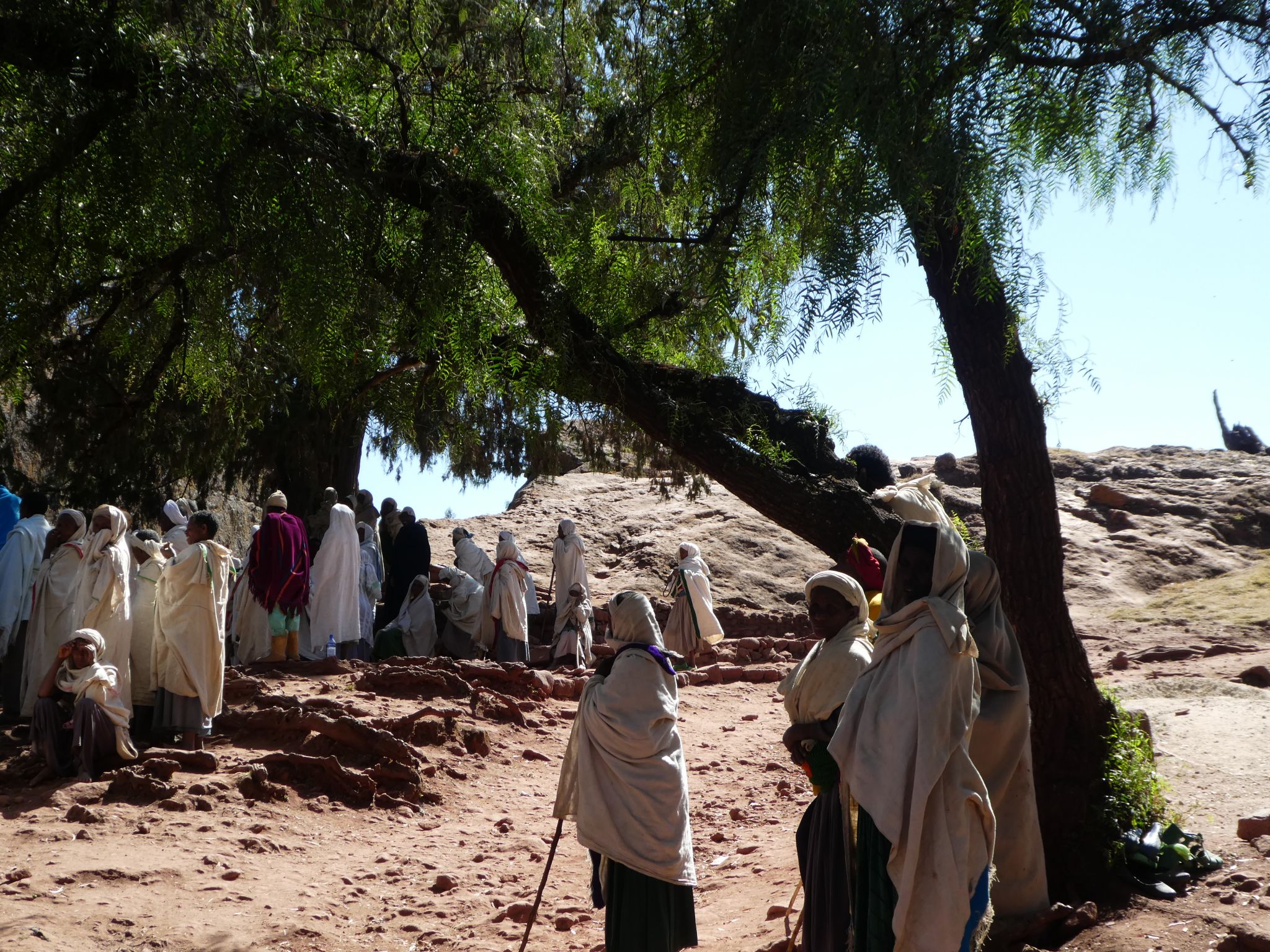 The churches were interesting from a construction perspective, but watching the pilgrims was much more interesting.

There are some other rock cut churches in the countryside around Lalibela, if you are a rabid enthusiast for this kind of thing.  We are not.  So we got a bus to Mekele, 12 hours away, for the final leg of our Ethiopian journey – a trip to the hottest and lowest place on planet Earth, the Danikil Depression.