In the far north of Ethiopia, where three tectonic plates converge, Africa and Asia are ever so gradually tearing apart from each other.   Over millions of years, this has resulted in the Danakil Depression – a 200 km x 50 km expanse lying 125 metres below sea level which is still being torn asunder at a rate of 1 to 2 centimetres per year.

It is the hottest place on earth in terms of year-round average temperatures.  Daytime ranges from a relatively cool 36 degrees average in January to almost 50 degrees in the middle of the year.

It has an average rainfall of zero in all 12 months of the year.

Pretty obvious why it should be on every traveller’s hit list, right?  Well, perhaps not immediately, but we can say without hesitation, there’s nowhere else on earth quite like this.  And here is why.

The Danakil is close to the border with Eritrea, a sensitive area where military tensions have simmered for years despite the war between the countries being officially over.  For the Afar people who live here, identity is tribal not an arbitrary political border.  In 2017, a German tourist was killed and his guide wounded by Afar rebels.  That’s not great for tourism, so access to the area is heavily regulated by a national and local bureaucracy apparently best managed by operators clubbing together.  So we left Mekele, a nondescript town in northern Ethiopia in a 4WD convoy with other tourists headed to the area.

In what seemed counter-intuitive, we first climbed up into mountains, then started to descend.  After a few hours we were in flat desert and started to see camel trains.  One estimate we read – unverified – said up to one million camel journeys per year pass in and out of the area.  It is mainly for salt mining.  More on that later. 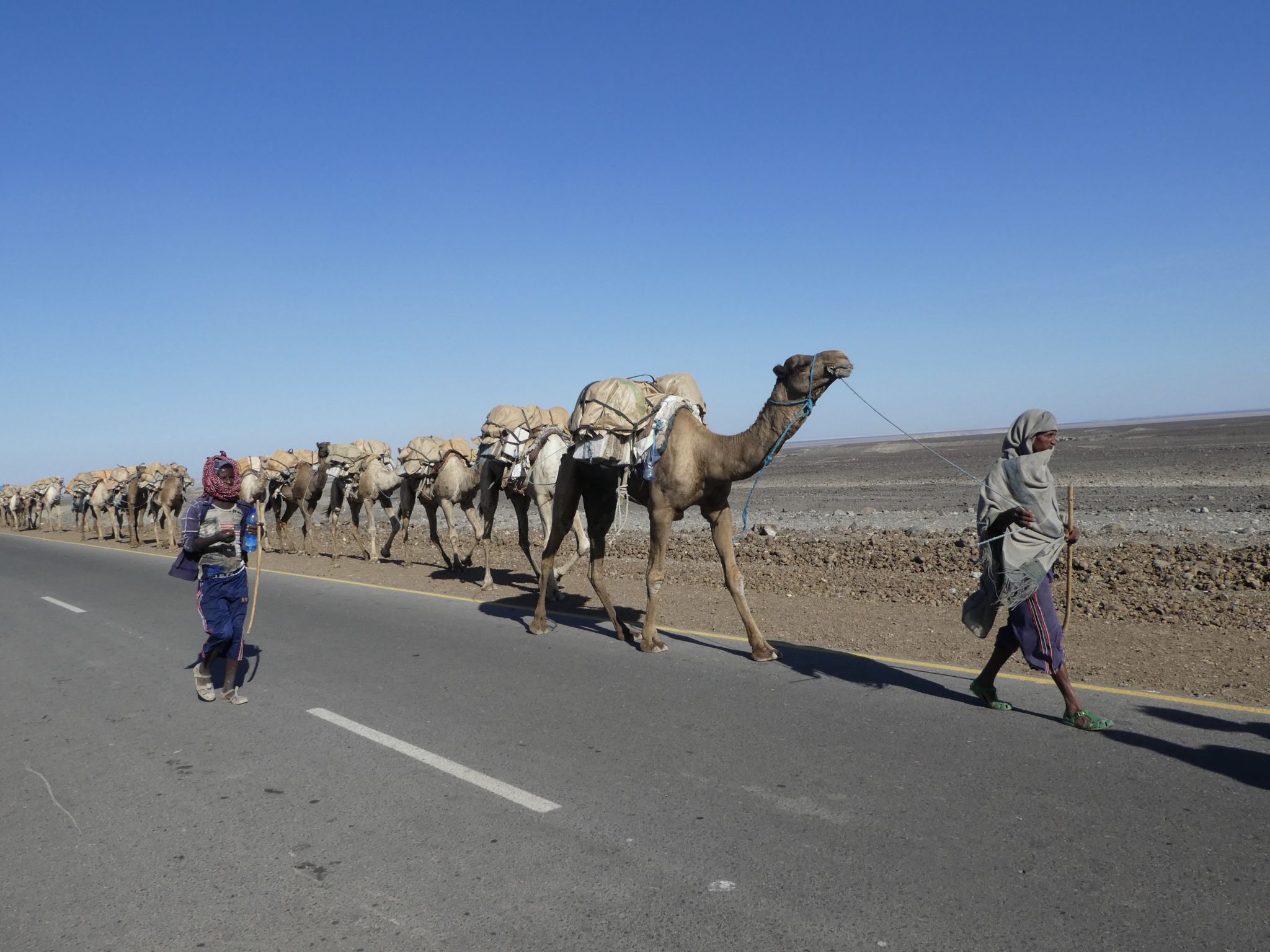 As we descended it was definitely getting hotter.  Mid afternoon we arrived at Hamed Ela, a military outpost on the edge of the Danakil where we were to camp for the night on the other side of the road.  The camp consisted of a couple of huts for the cooking and …. beds.

No huts, just a bed under the stars.  No loo, just a very long walk across the absurdly flat ‘great outdoors’ to find some privacy. 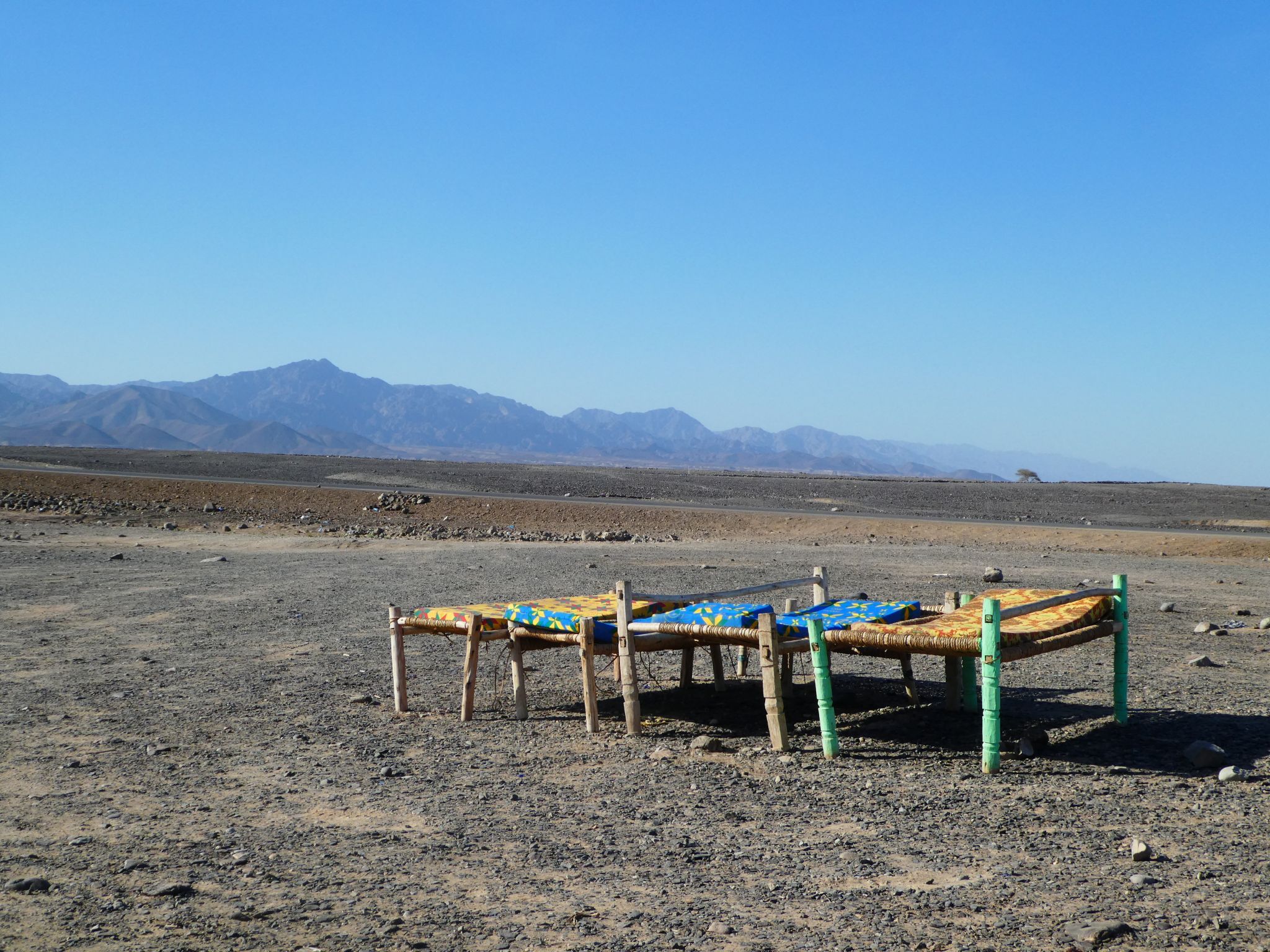 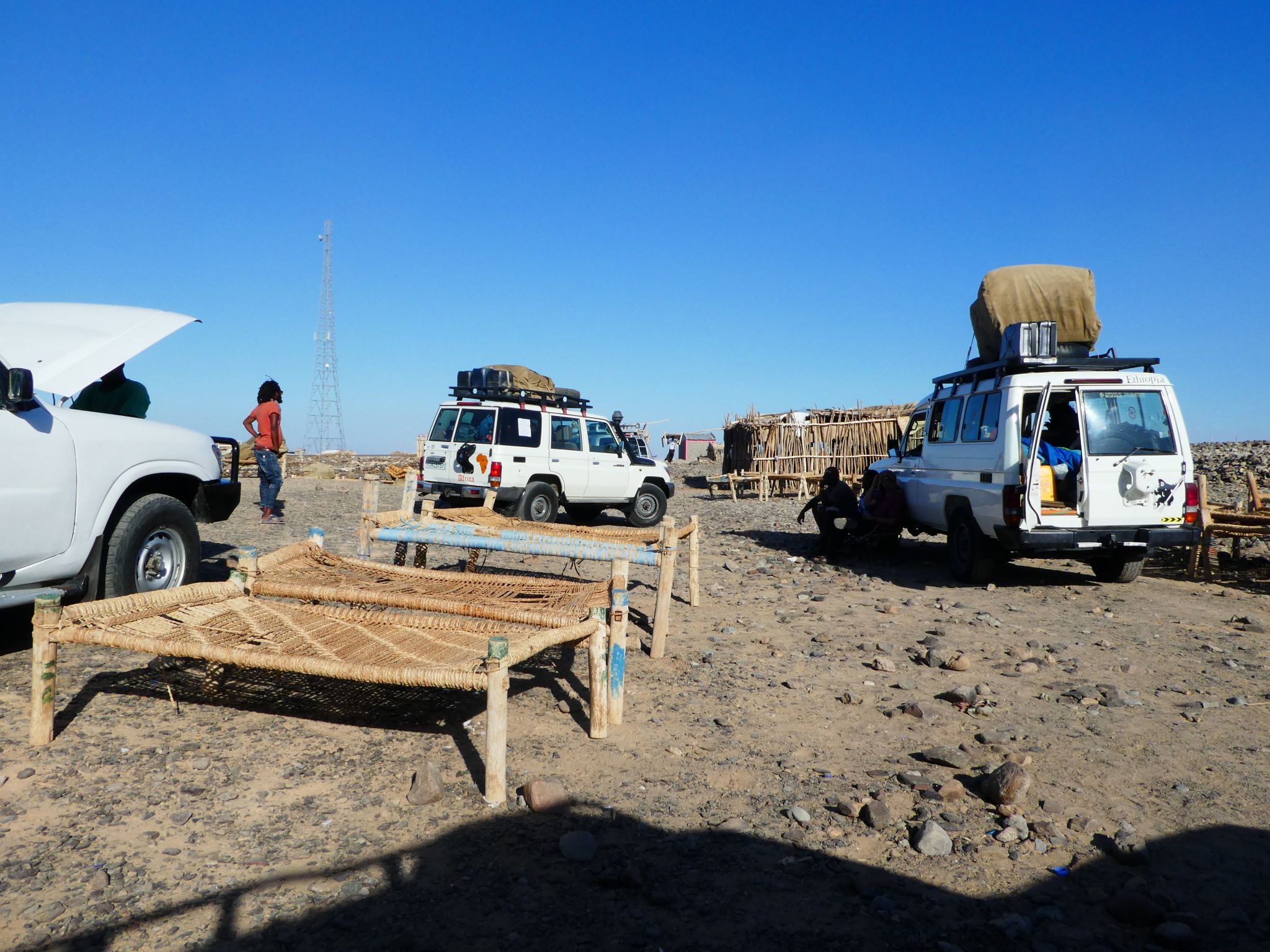 That afternoon we headed off to a salt lake.   There’s a lot of salt here.   The massive Awash River, Ethiopia’s largest, originates west of Addis Ababa.  Winding its way across the country, at one point it is 61 metres wide.  But here, 1,200kms from its source and more than 100 metres below sea level, it dries up in a series of salt lakes. 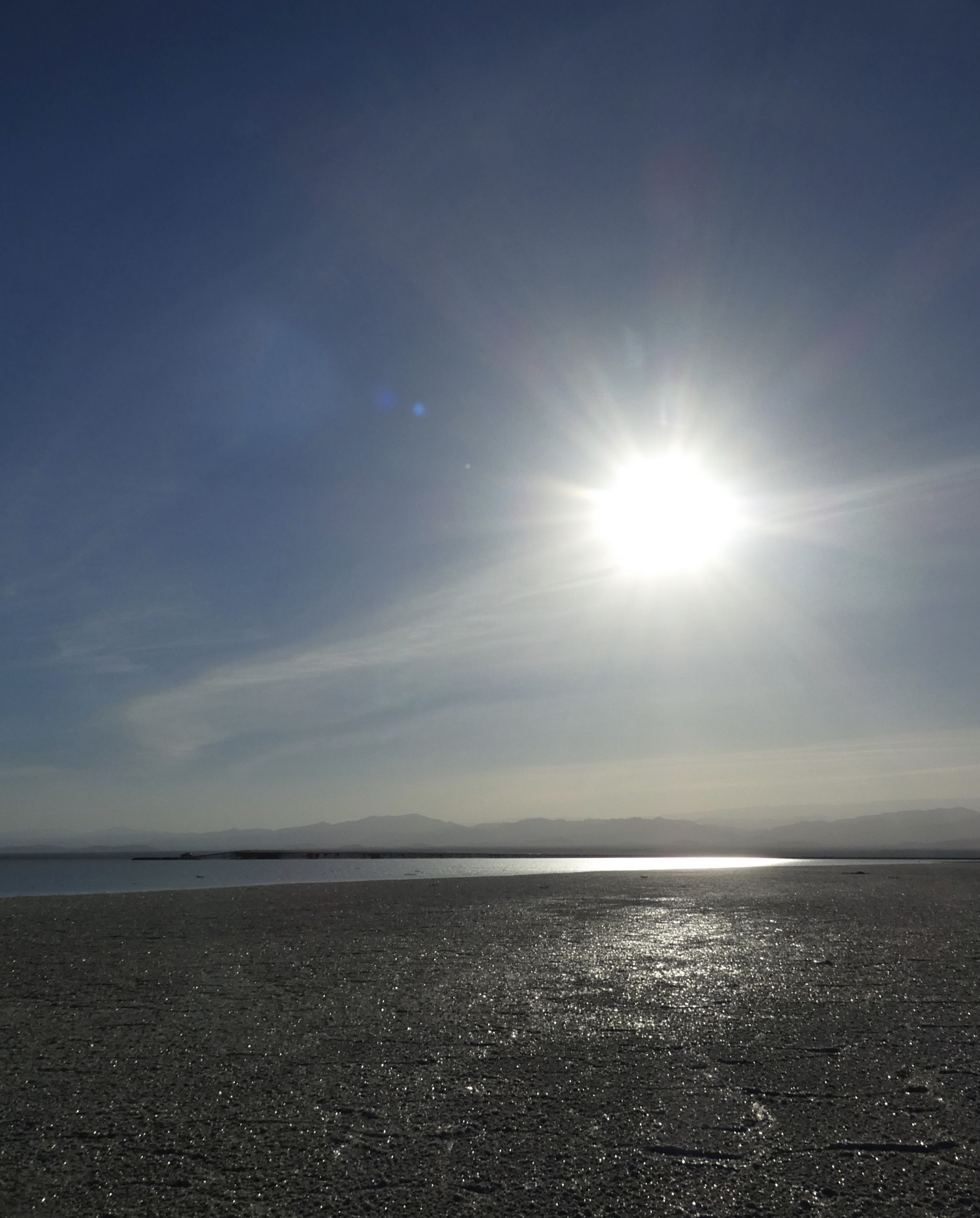 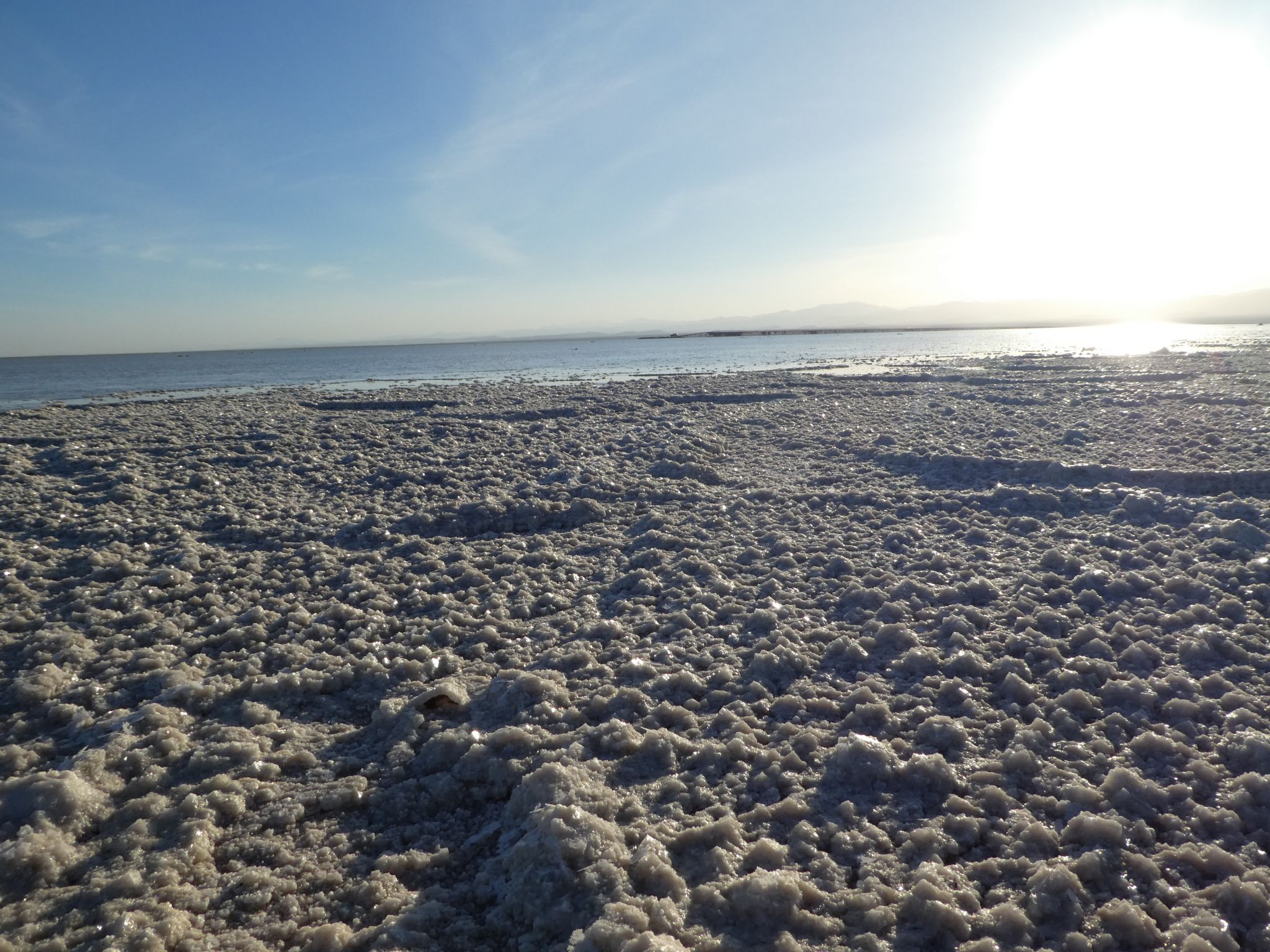 It’s difficult to tell how thick this layer of salt crust is.  In places it is up to 5km thick, but in other places it’s much thinner.  We went to a spot where the guides have cut a ‘swimming pool’ in the crust.  The water beneath is, of course, super saturated with salt.  It’s like floating in the Dead Sea without all the mud. 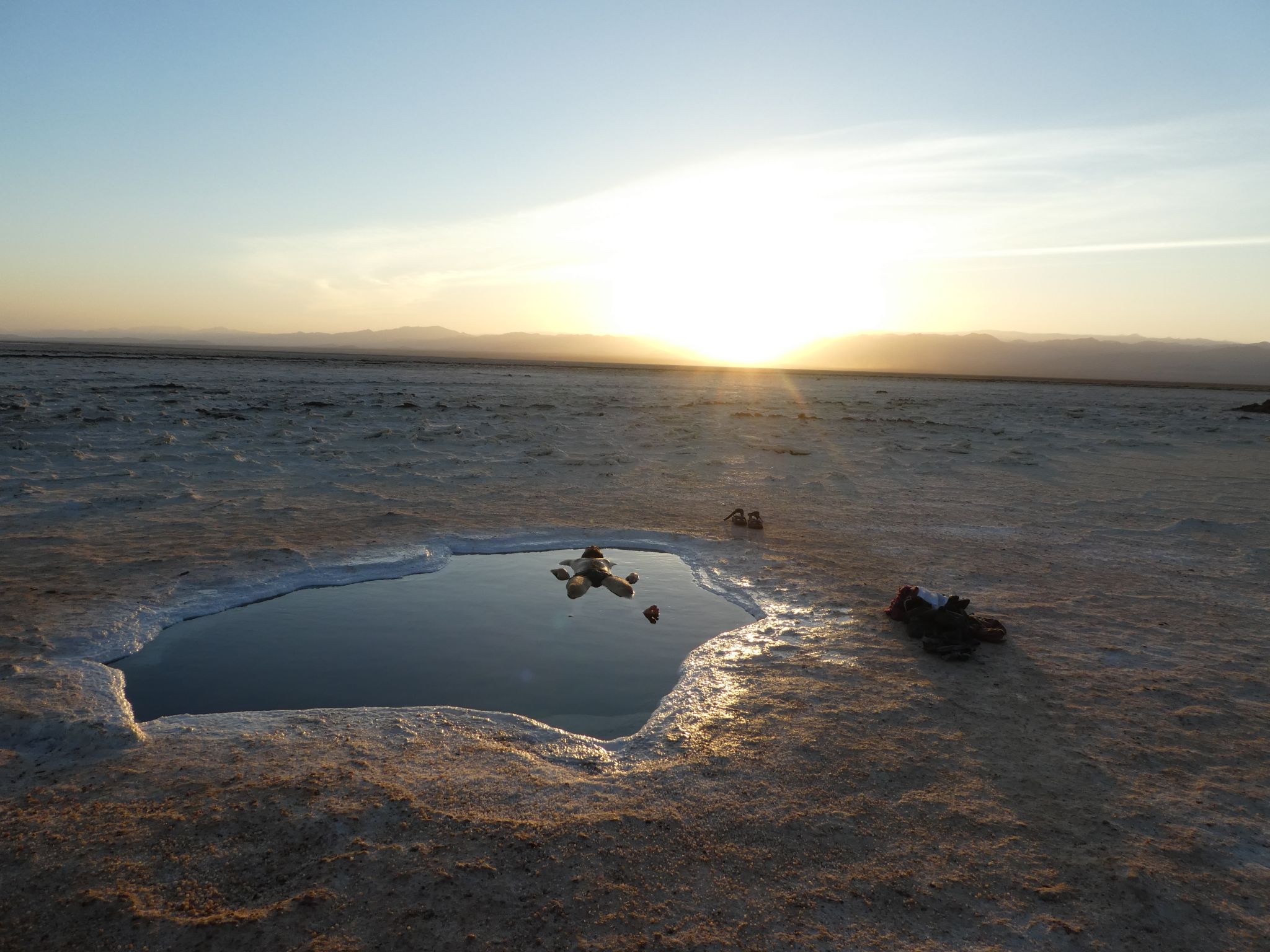 As the sun set, our driver set up a tasting of local wine.  We have tasted some shocking wine in various countries over the years but nothing like this.  These are unquestionably, unremittingly, unforgivably awful.  The local ouzo, however, is quite nice! 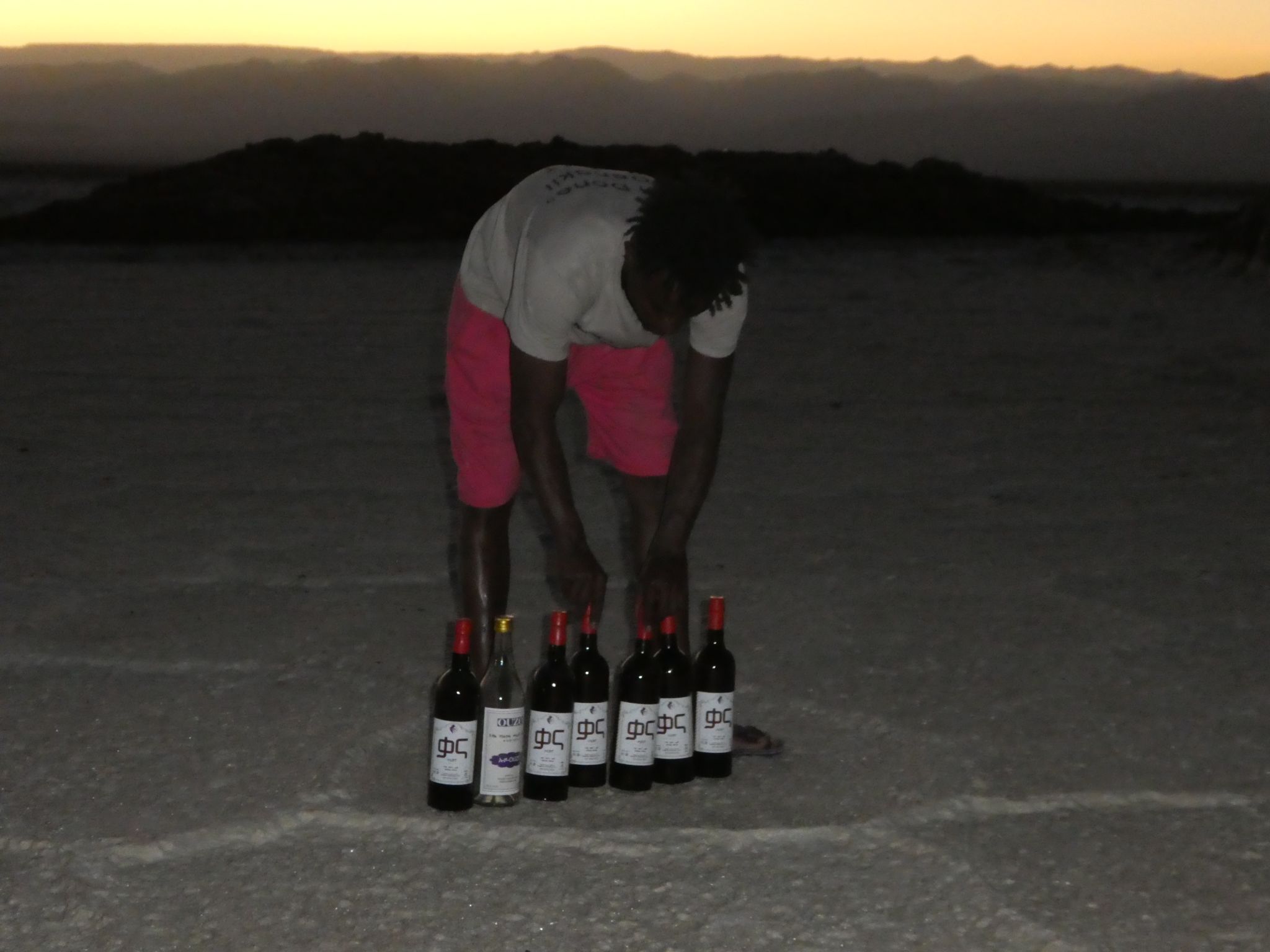 Next morning as we headed deeper into the Danakil we passed more and more camel caravans headed for the salt mines. 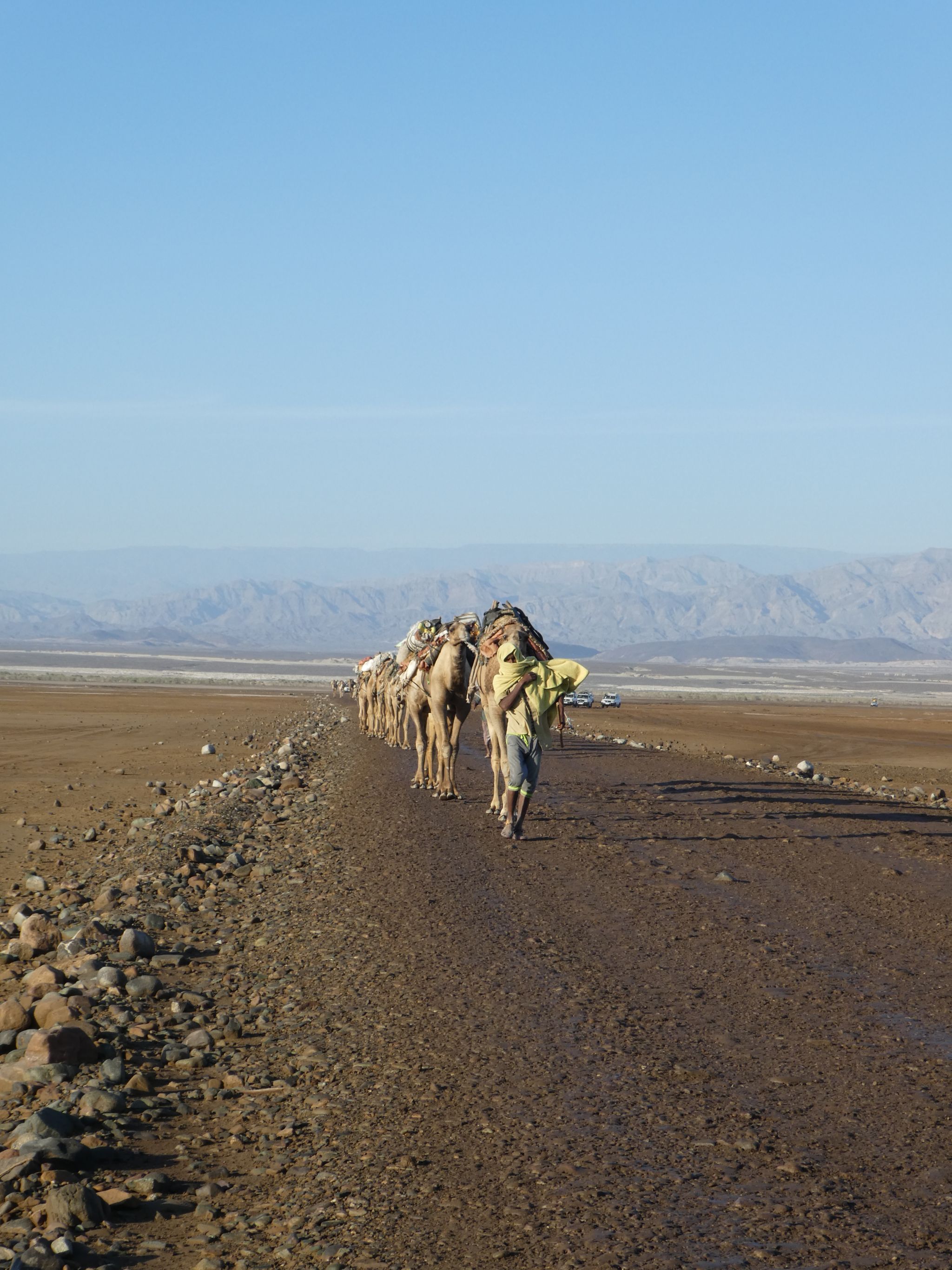 Our destination was Dallol, a particularly special part of the Danakil.

Dallol is an Afar word meaning disintegration or dissolution.  This area is ringed by volcanoes and, at 48 metres below sea level, Dallol is the Earth’s lowest land volcano.  It is dormant but groundwater that flows into the area from the nearby highlands is heated by magma flowing beneath the surface, and as the heated water moves toward the surface it absorbs salt, sulphur, potash and other minerals.

The result is an alien landscape of sulphur-ringed hot springs, sulphuric acid ponds and salt cones spewing out potentially toxic gases.  It’s no coincidence that the nearby ghost town of Dallol, built by an American company in the 1960s for potash mining, was abandoned due to an unacceptably high death rate from fume inhalation.

But the landscape is incredible.  Unique, vibrant, beautiful in a ‘these colours simply cannot exist in nature’ kind of way. 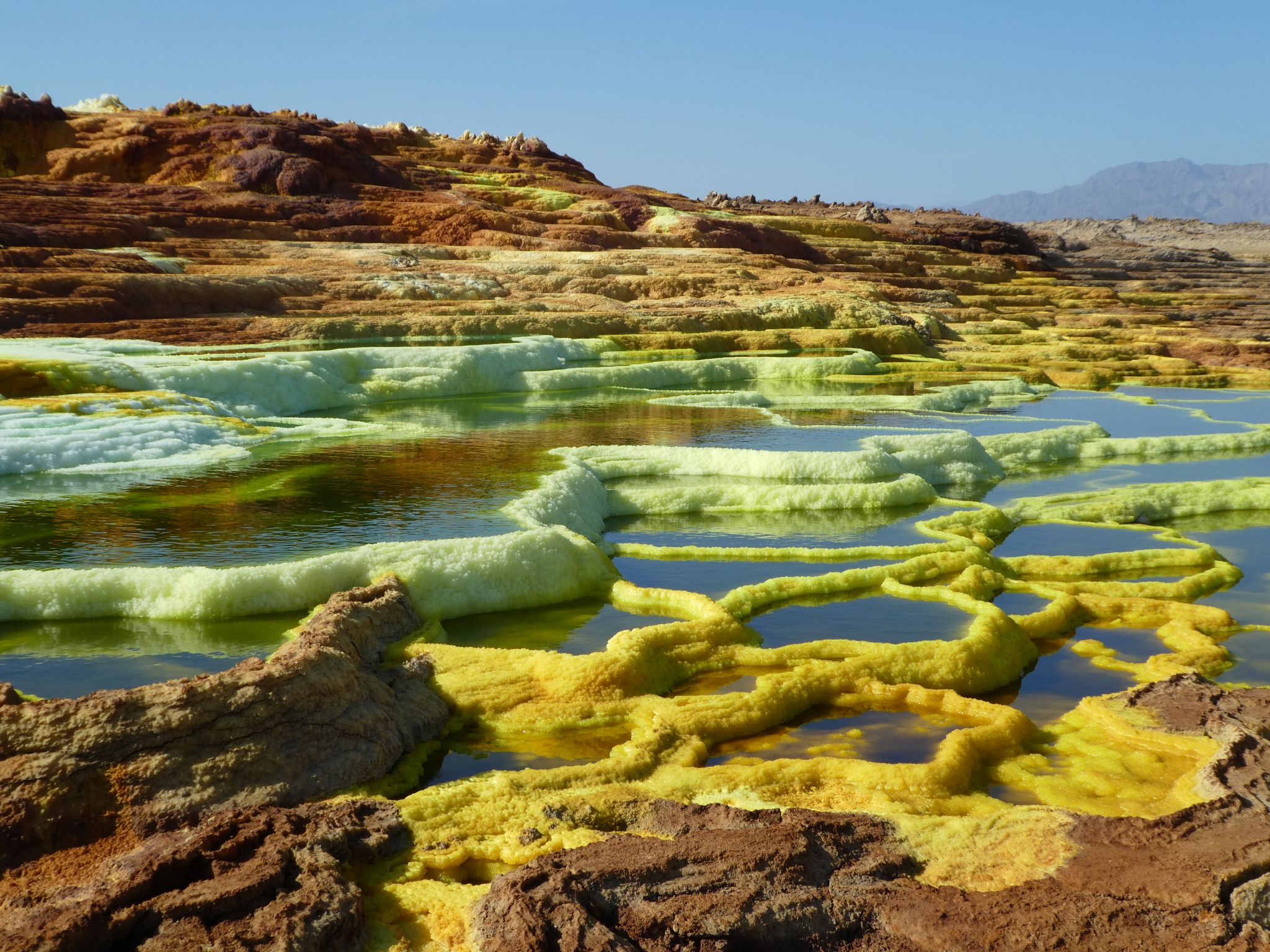 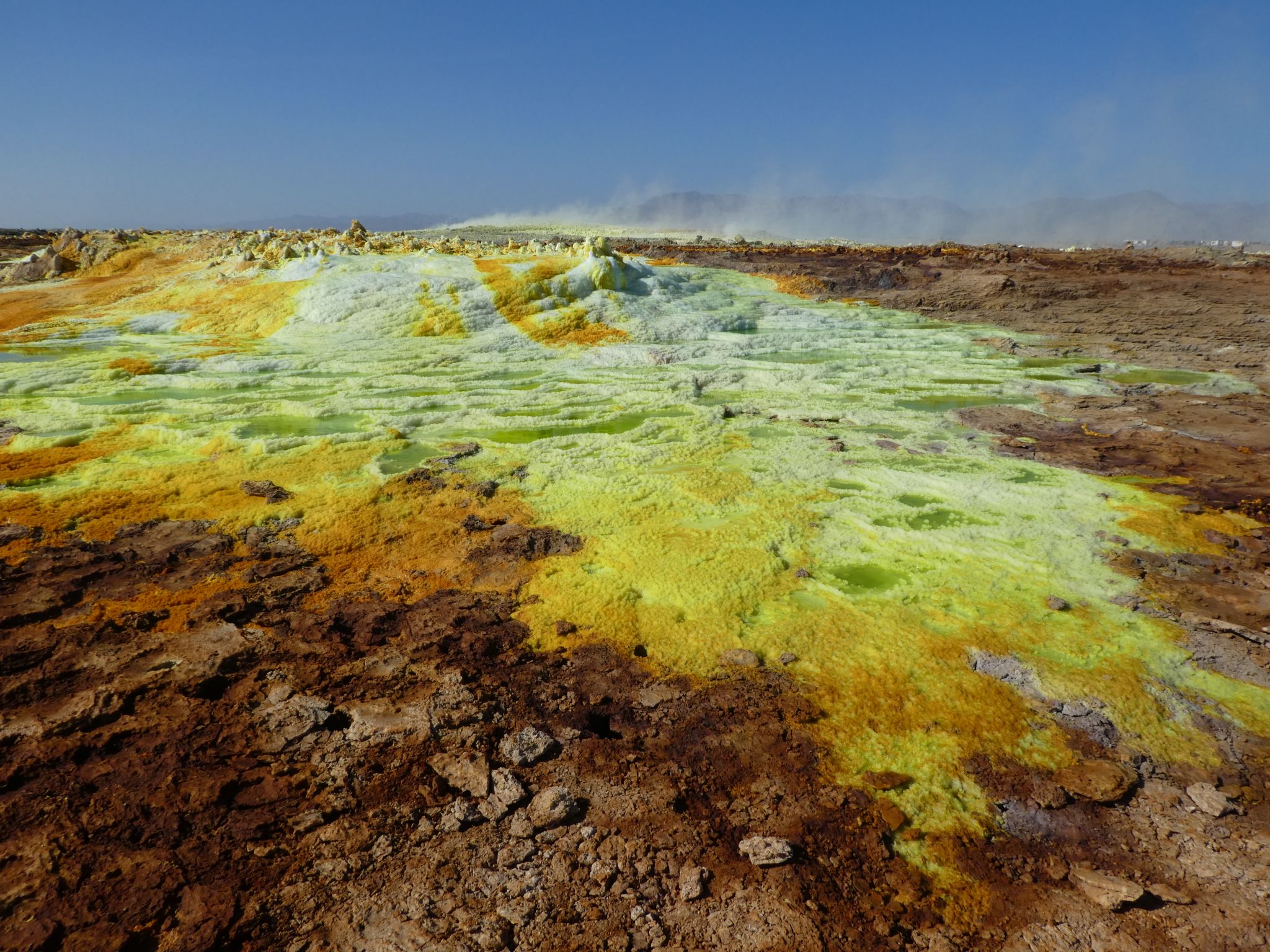 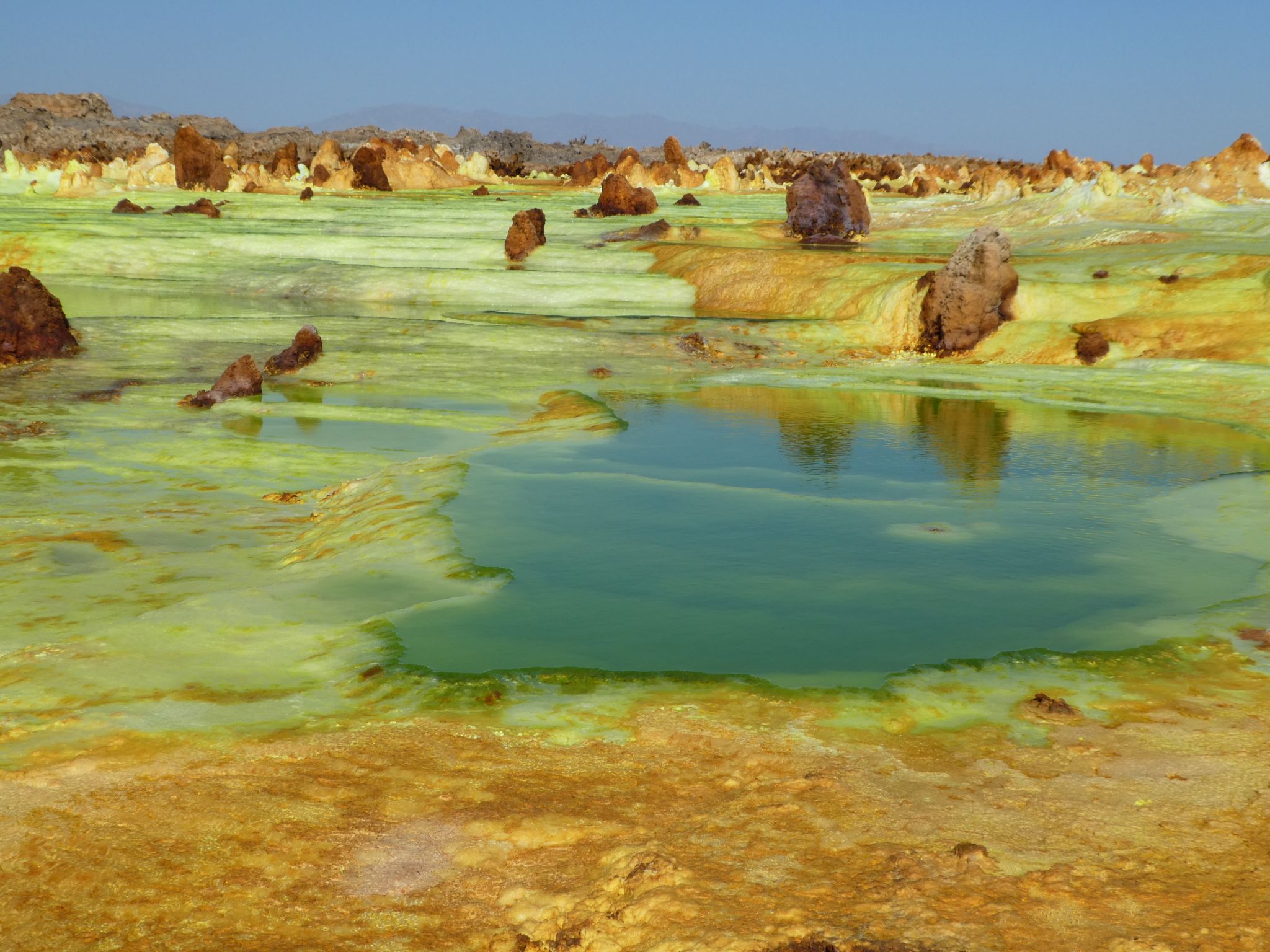 Dallol is Yellowstone on steroids.  It’s hotter and the water is significantly more acidic, with a ph of 0.2 which experts say is ‘virtually unheard of in nature’.  Bacterial life has been found here.  They are ’polyextremophiles’ which means they are adapted to extreme temperatures, high acidity and high salinity all at once.  The conditions are thought to be similar to those on Mars, so these bacteria are being studied for a better understanding of how life might exist on other planets.

Did we mention it’s hot.  Really hot.  And it stinks.  But it is truly stunning. 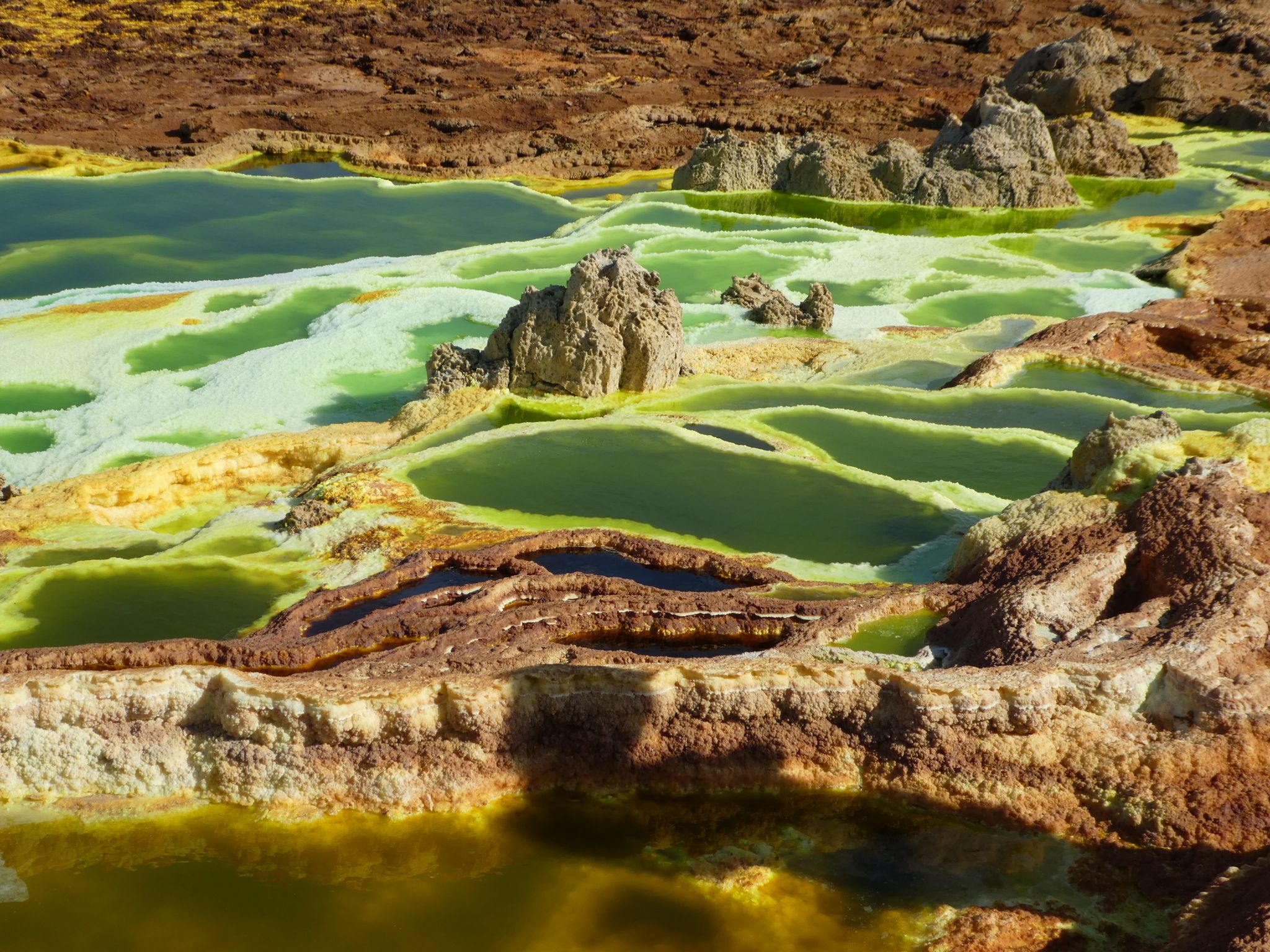 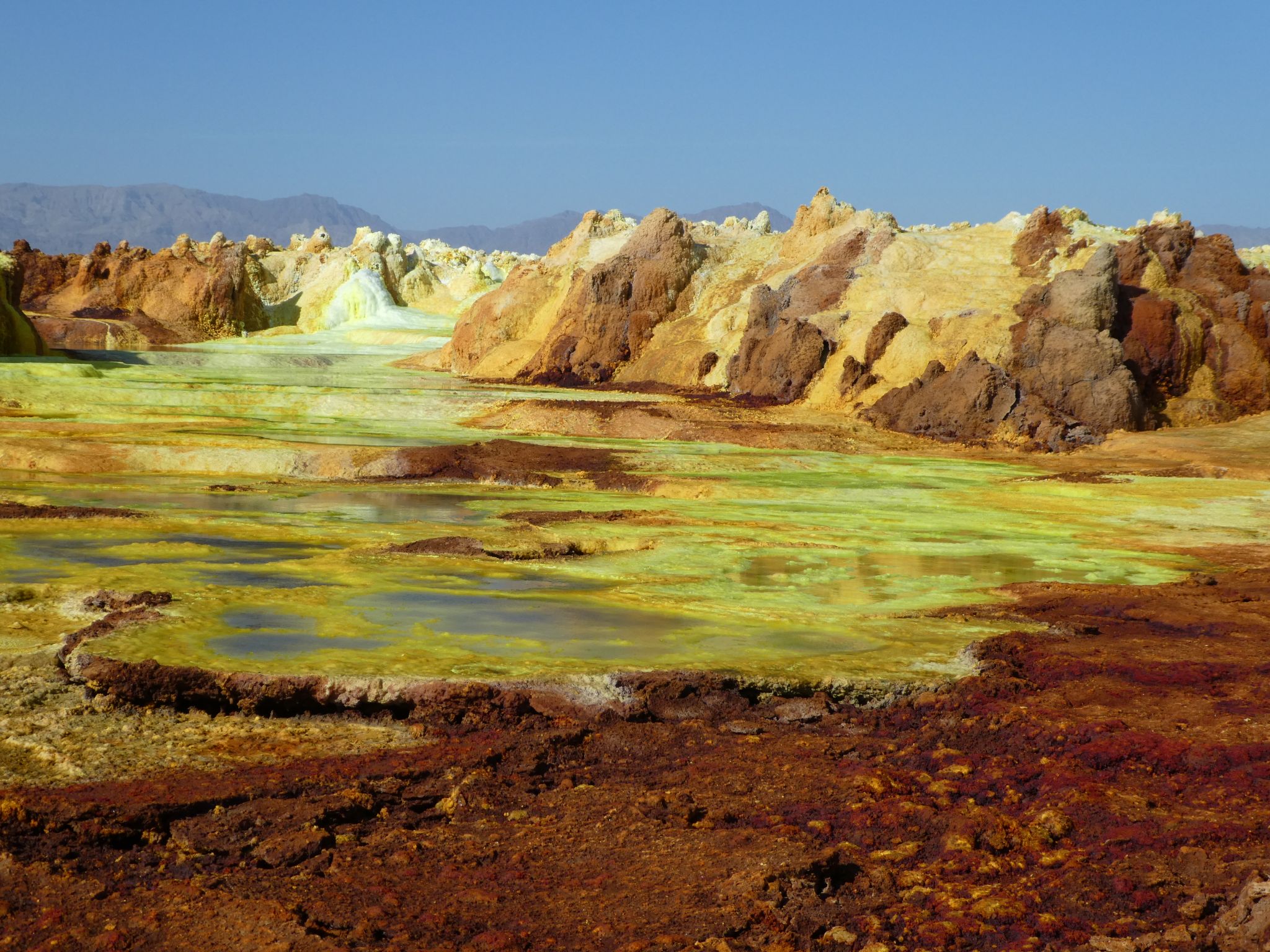 At nearby lakes which are saturated with potash, hot springs bubble to the surface at boiling point.  The lake water has an unpleasantly oily feel and a nasty smell.  We saw dead birds in hollows in the rocks.  Carbon dioxide is heavier than air and apparently migrating birds which land in search of water are overcome by the fumes.  Best not lie down here for a nap. 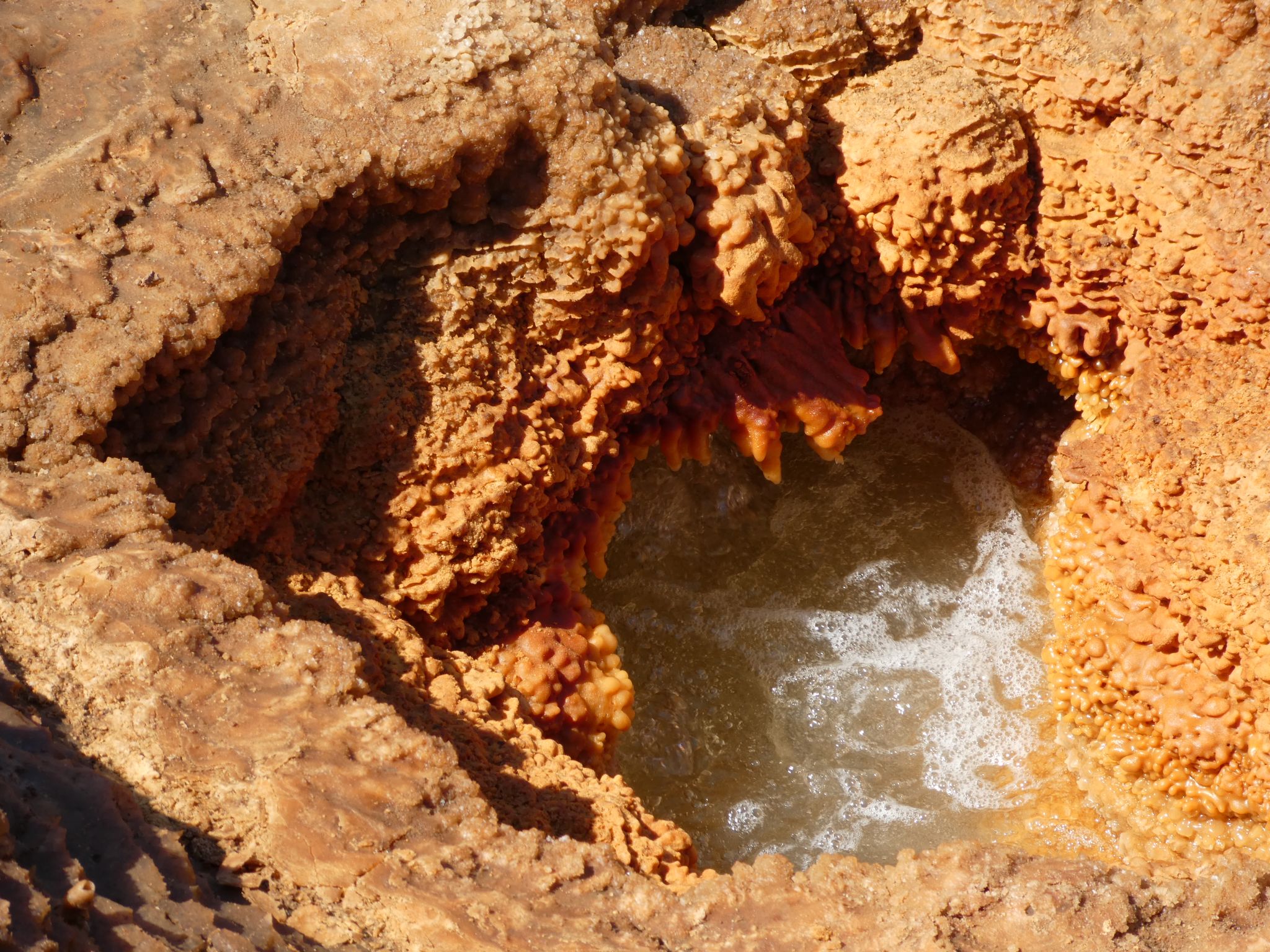 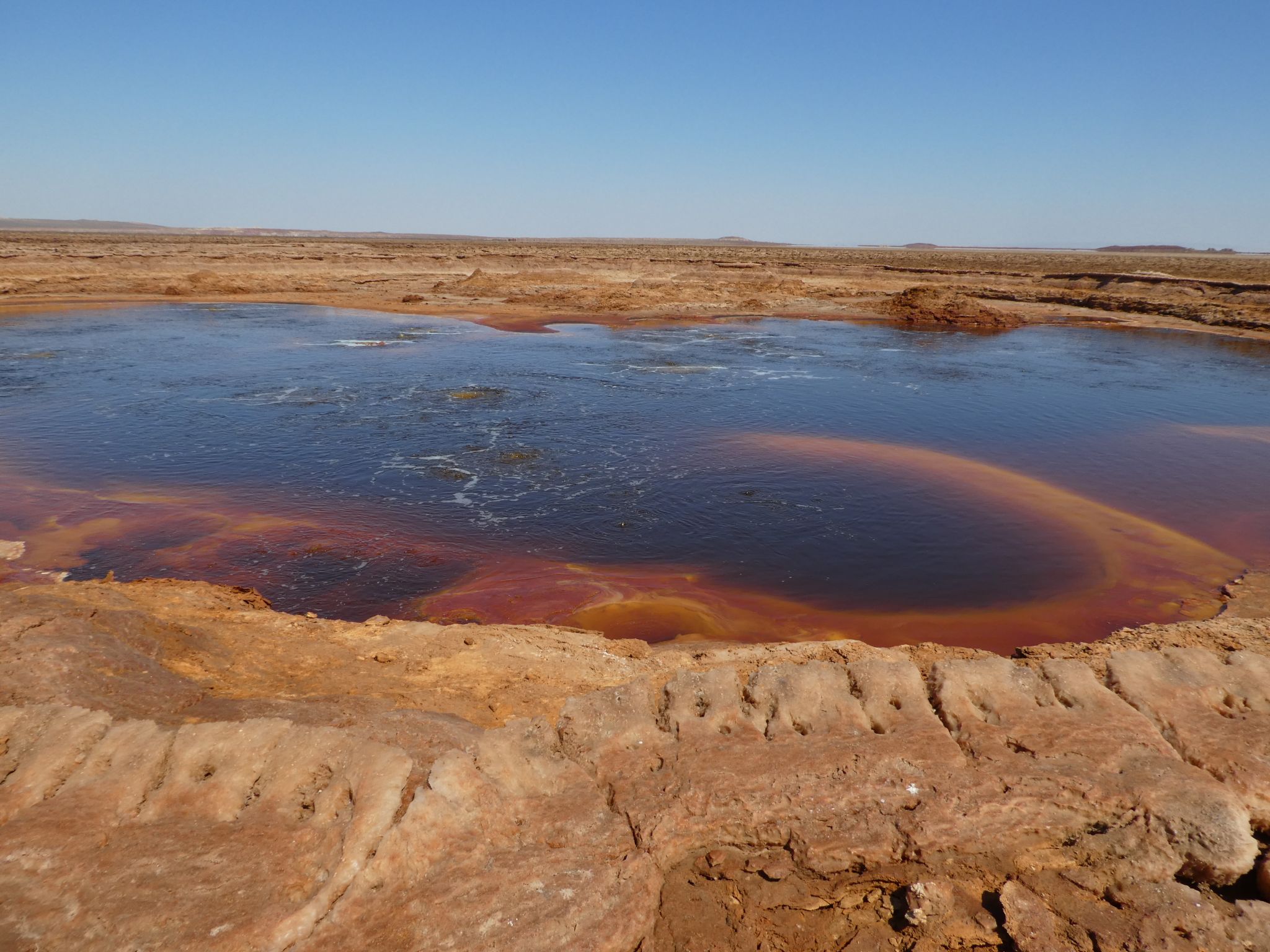 Then we stopped for a brief clamber around these mountains made of salt and mud. 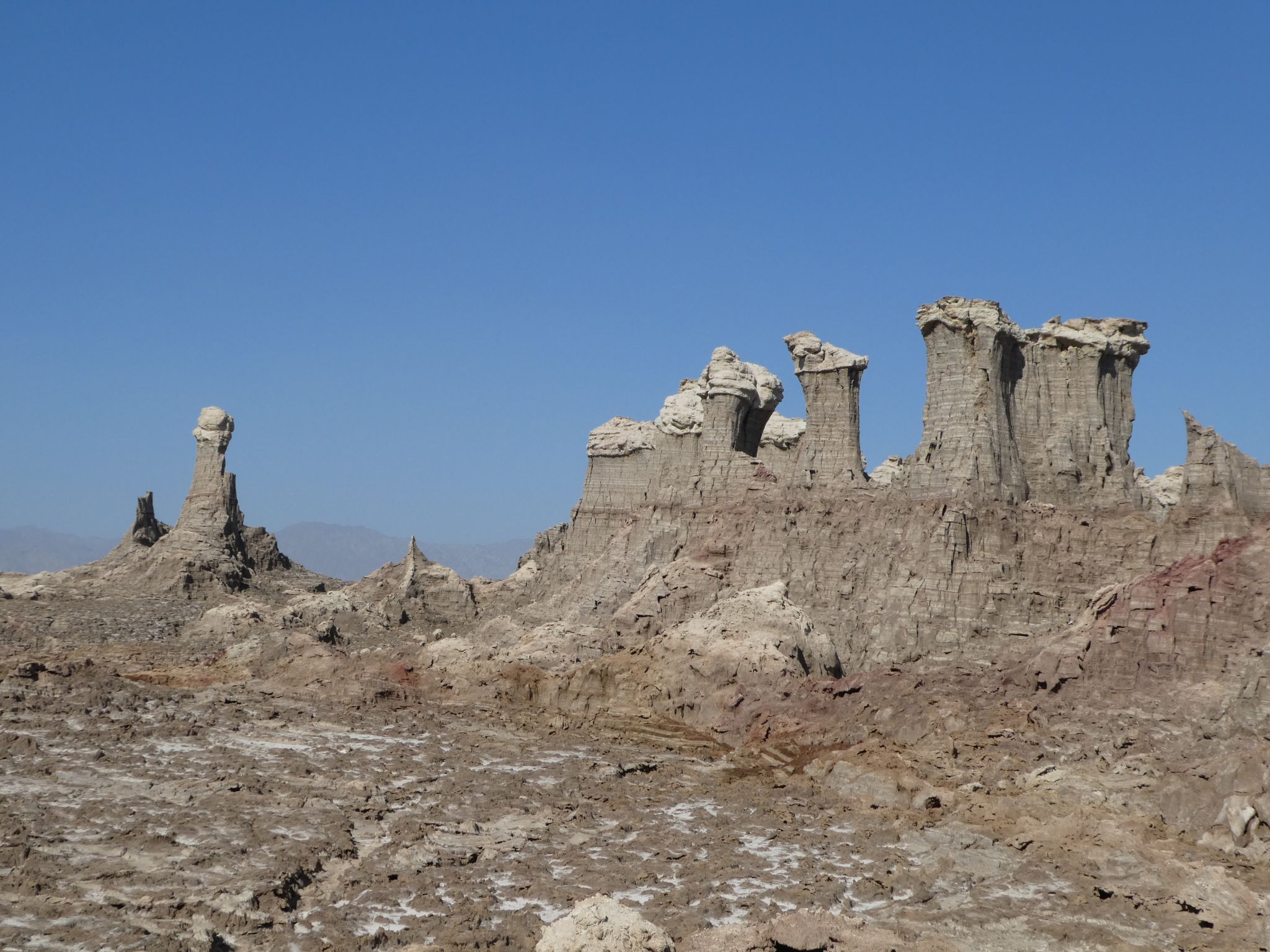 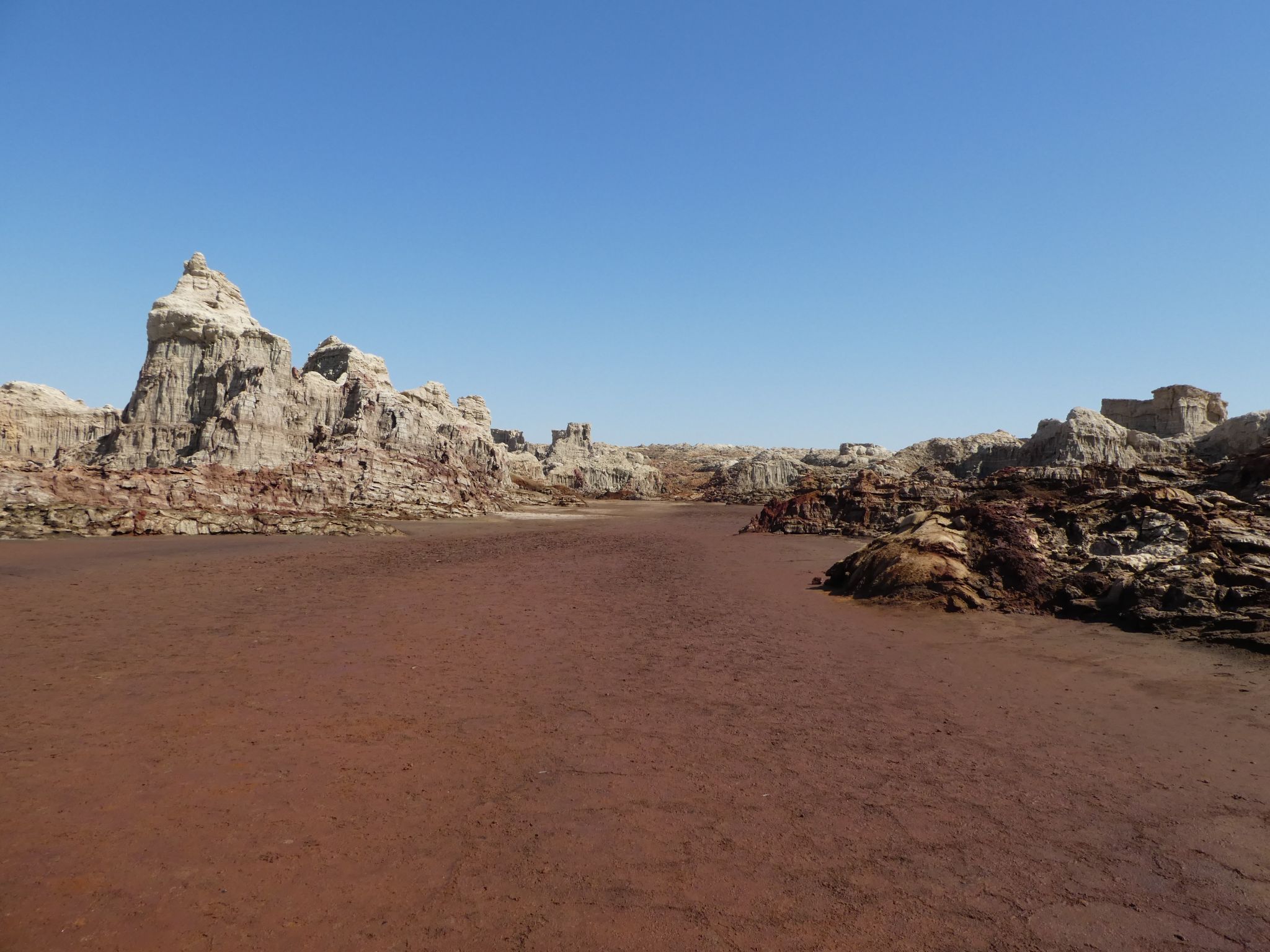 The mountains are useless for salt extraction.  Salt mining is done on the flat salt pans many kilometres away.  That was our next stop.

Here in the baking sun, about 750 Afar men hack out approximately 1.3 million tonnes of salt each year.   First they break salt plates from the surface, then each plate is cut into rectangular 4kg tiles for transportation.  The process is slow and tough.  There is no machinery, just hand tools and human labour.   The heat is brutal and there is no protection from the sun. 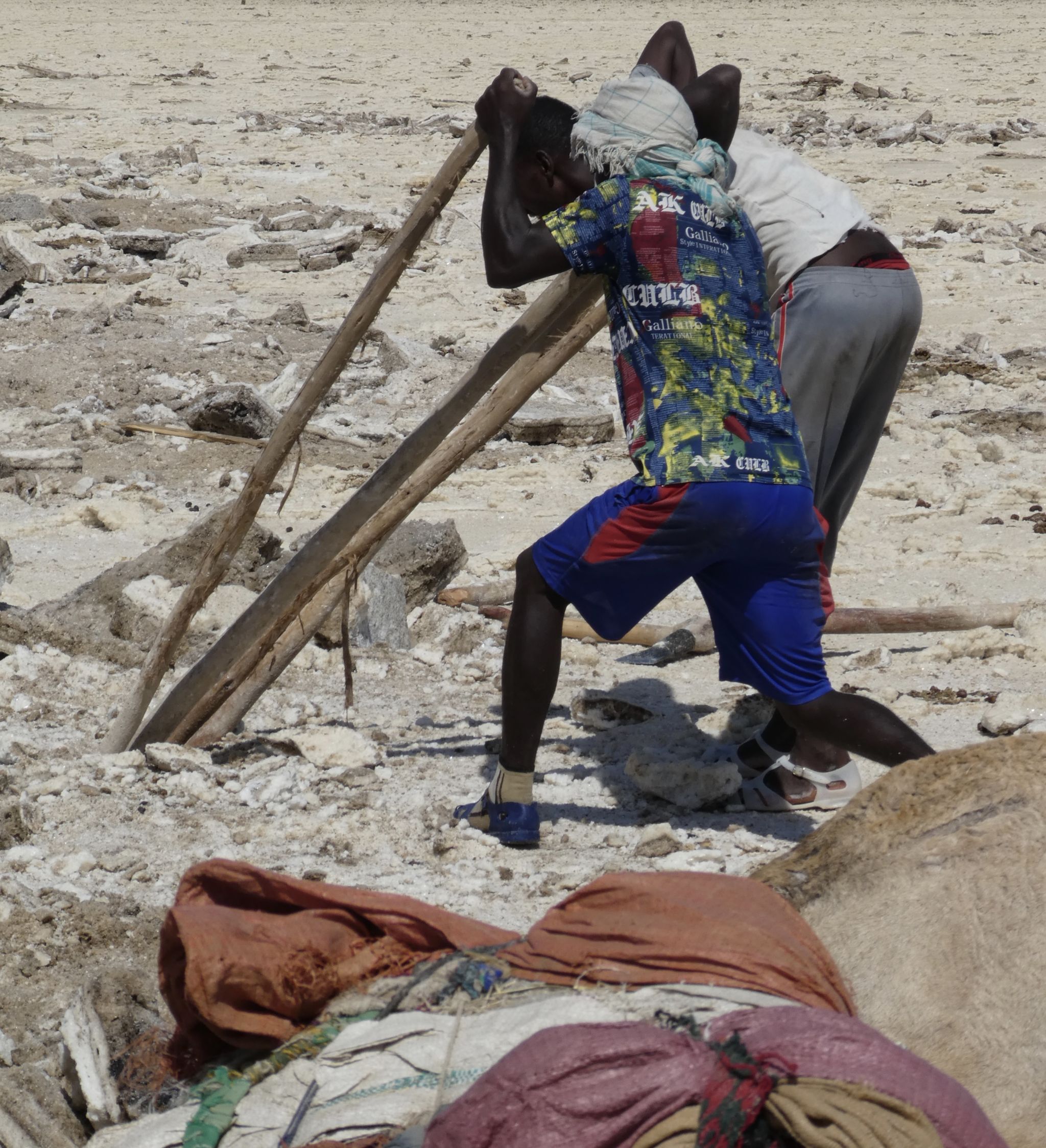 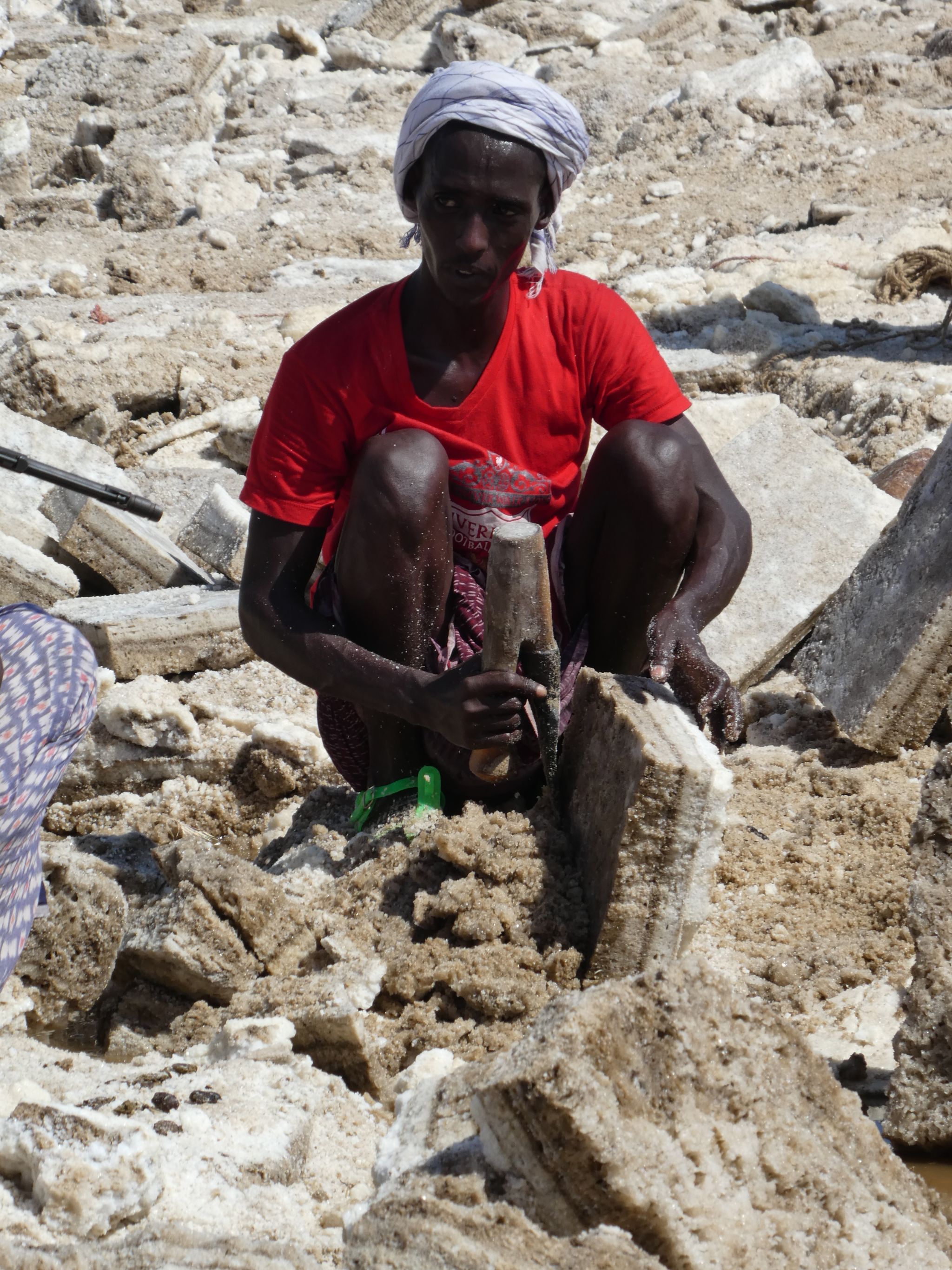 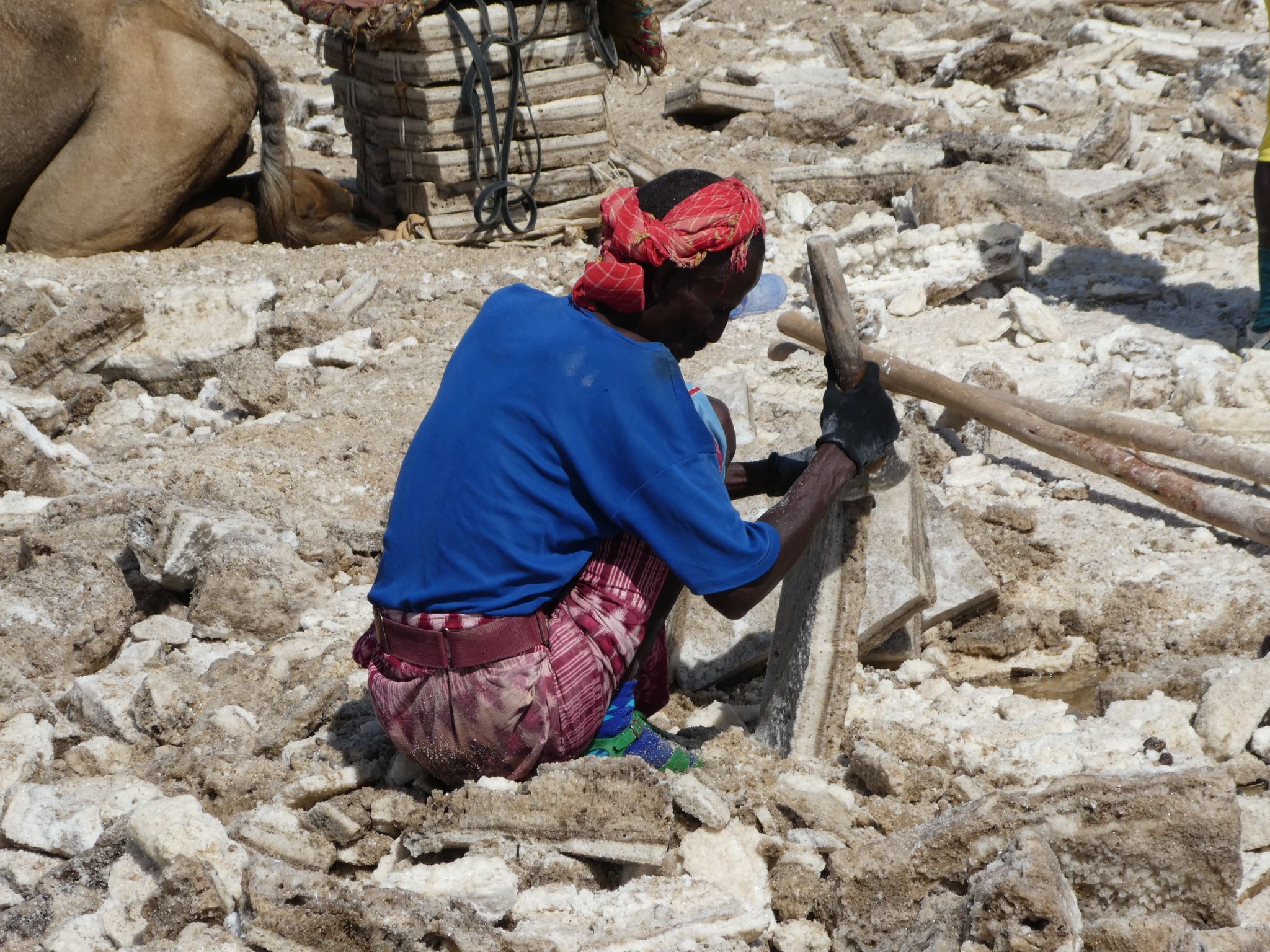 The tiles are loaded onto camels for transport to the market in Berhale, three days camel-walk away. 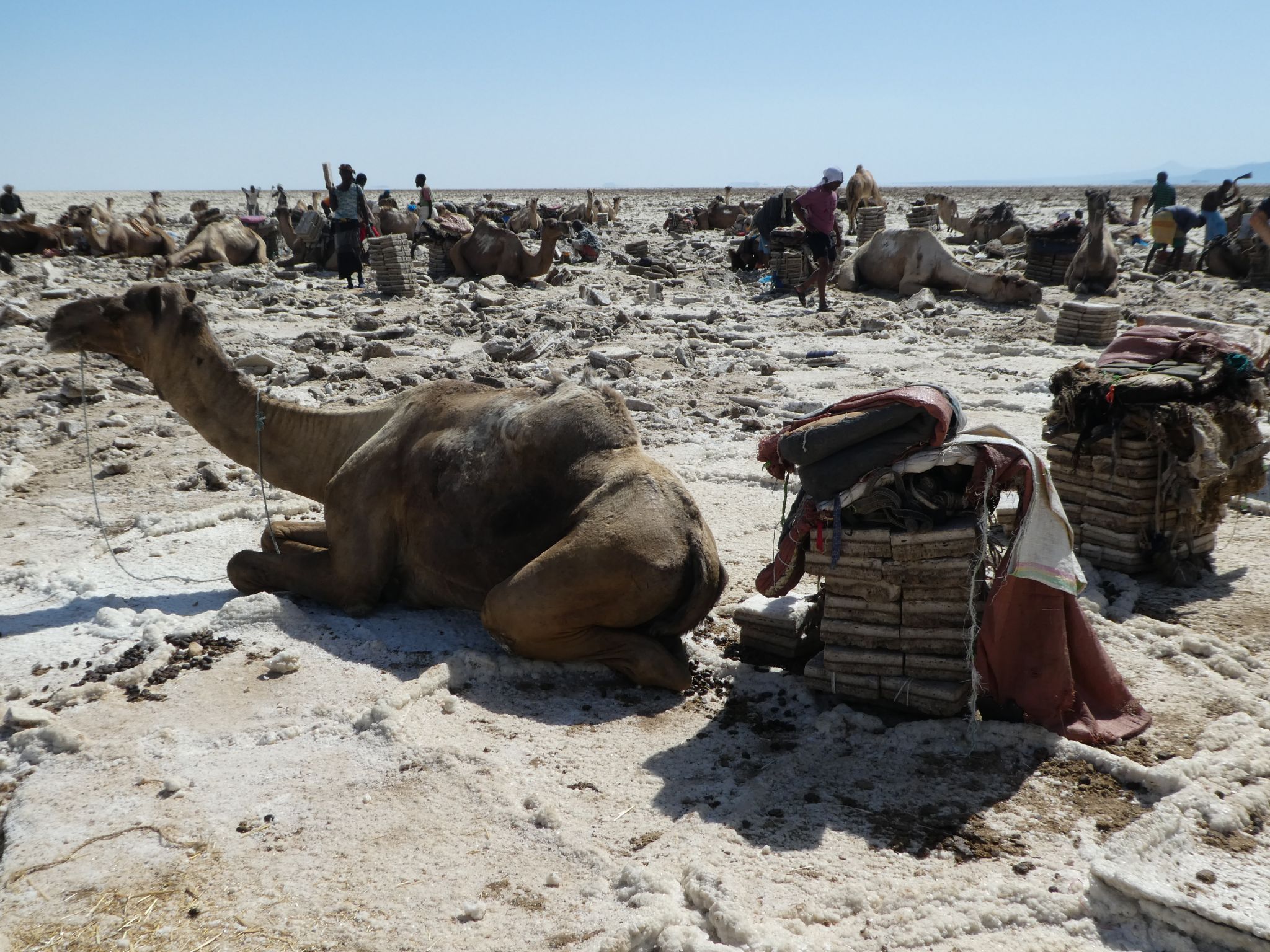 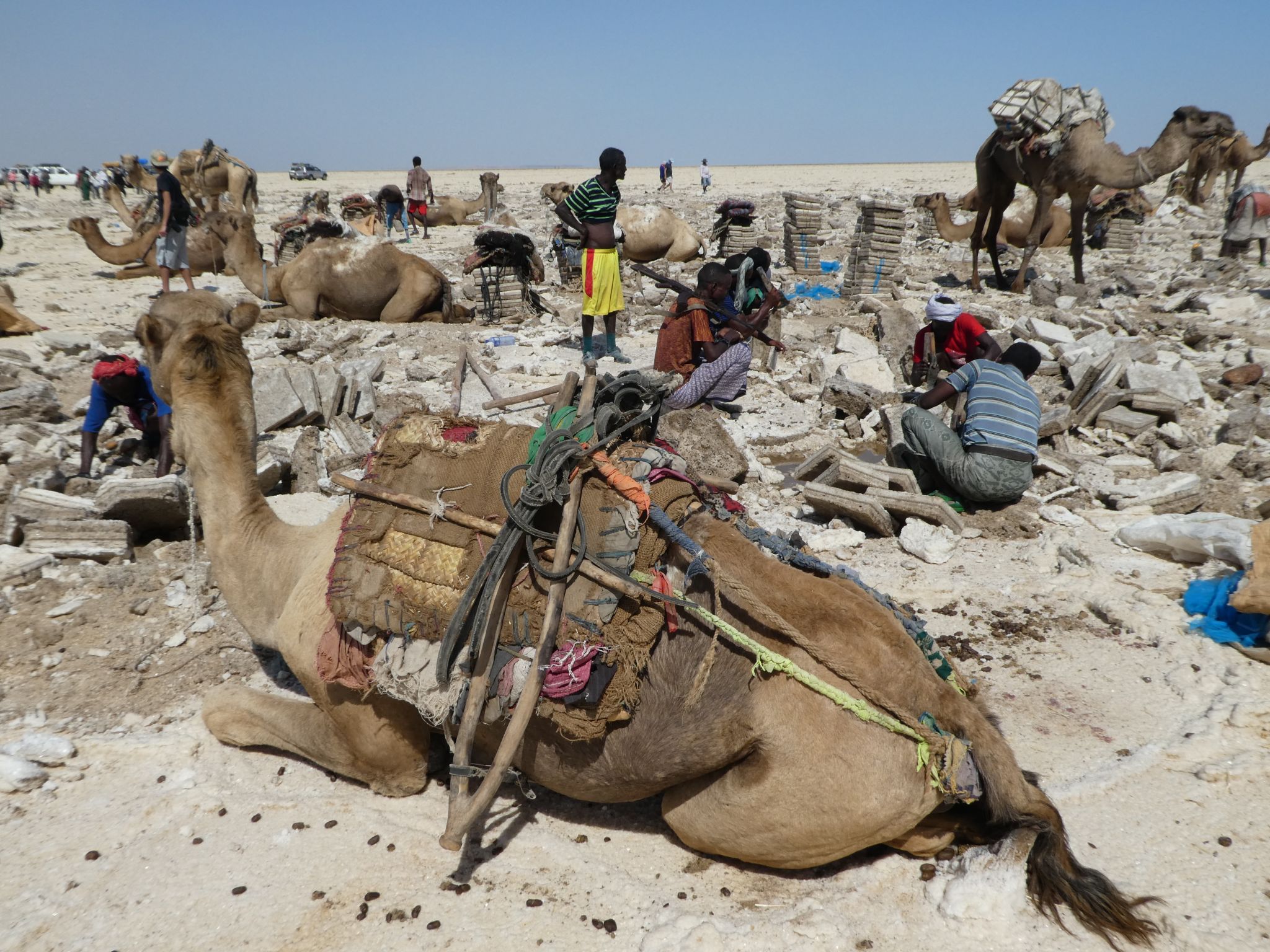 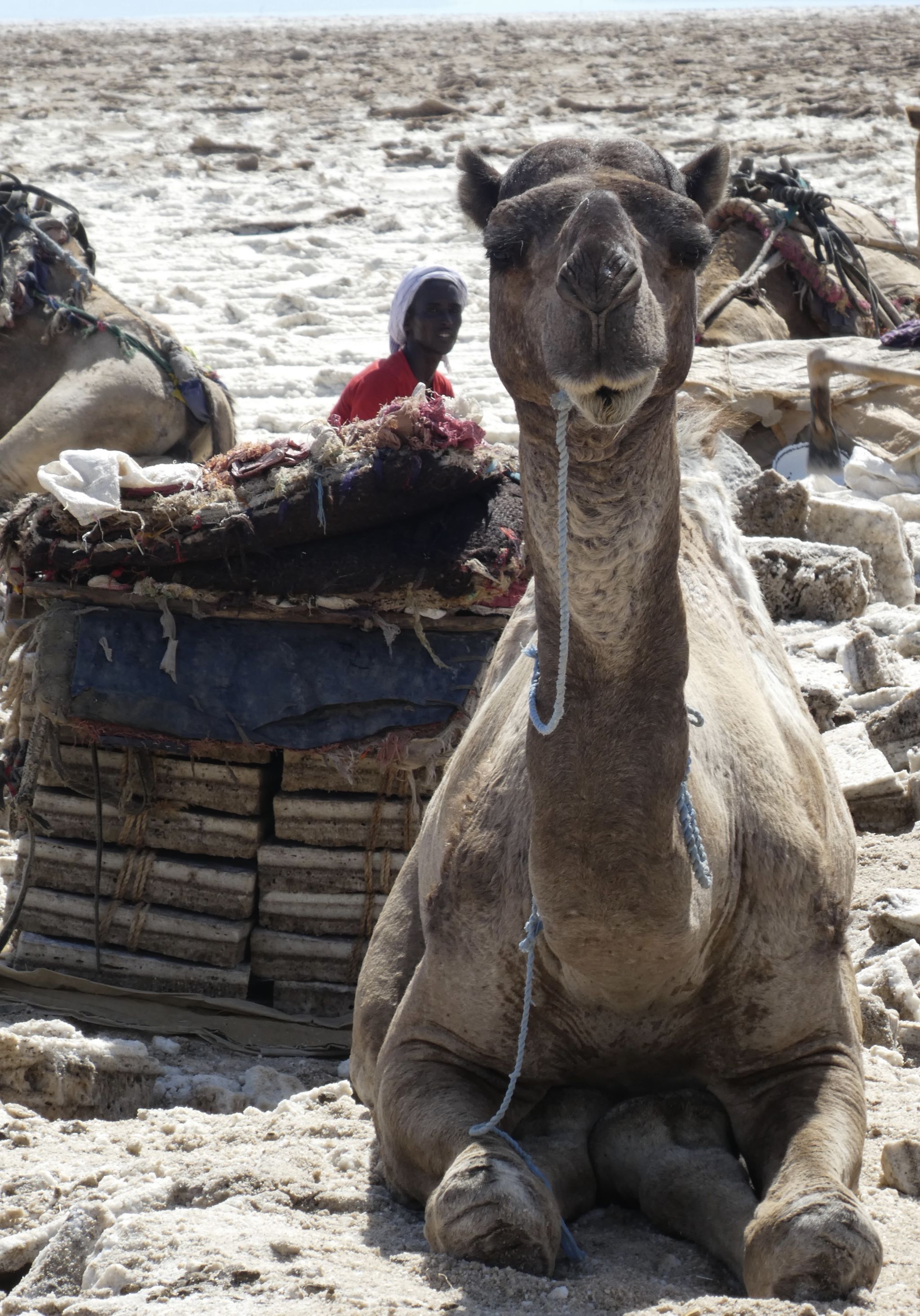 There are stories of traders in centuries past who swapped salt blocks for the same weight in gold bullion, earning salt the nickname ‘white gold’.  Those days are long gone.  These guys eek out a meagre existence earning about 1 birr ($0.35) for each block.  And now even this livelihood is threatened as Chinese funded roads reach into the area, opening up the possibility of industrial scale mining.

Next day we headed toward Erta Ale.  It is Ethiopia’s most active volcano and one of only six volcanoes in the world with a lava lake.  All day we drove through the desert and mid afternoon turned off the road and headed cross country.  For about five hours we bumped over a volcanic landscape at a snail’s pace.  The sun set and still we drove.

The plan had been to arrive at the base of Erta Ale by 5pm, rest and eat, then head up the mountain around 8pm.  Walking up at night avoids the unbearable heat of a day walk.  As it turned out, we didn’t reach the base until after 8pm, so we didn’t start the walk up until almost 9pm.  There were several groups, so quite a lot of people in total, snaking their way up in the light of head torches, mobile phones or other devices.  There was also a convoy of camels carrying mattresses and sleeping bags.

The walk to the top is not steep, but night walking on the twisted basalt is slow going.  The 9km walk took just under three hours so we arrived about midnight.  We walked to the crater rim where, in theory, you can see the lava lake bubbling away.  Unfortunately, the mountain has been misbehaving for months, belching great clouds of smoke which obscure all sight of the lava.  What you see instead is rosy coloured smoke.

We had a couple of hours sleep and were woken up pre-dawn to watch sunrise over the volcano.  Again, not spectacular, but interesting enough. 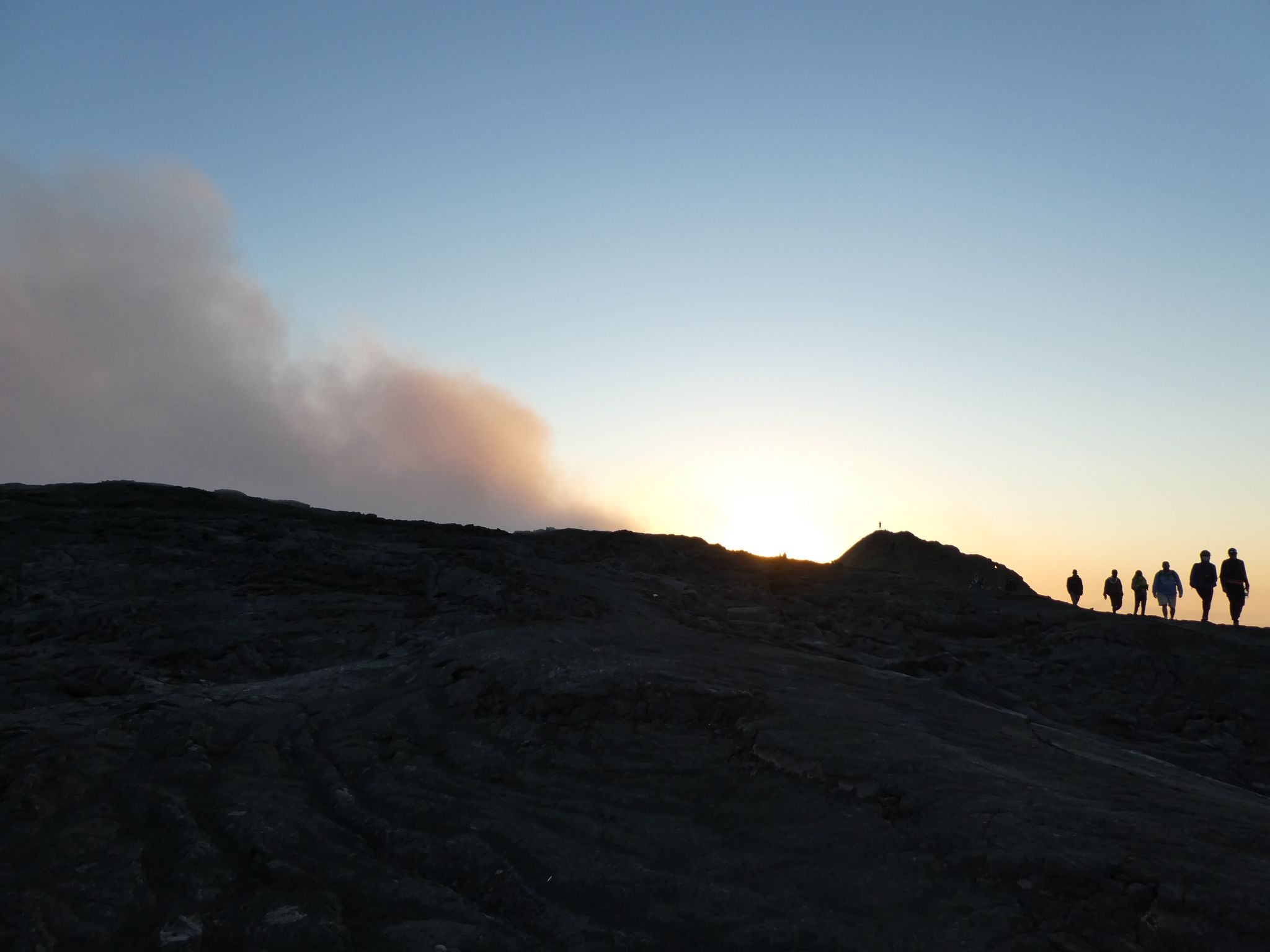 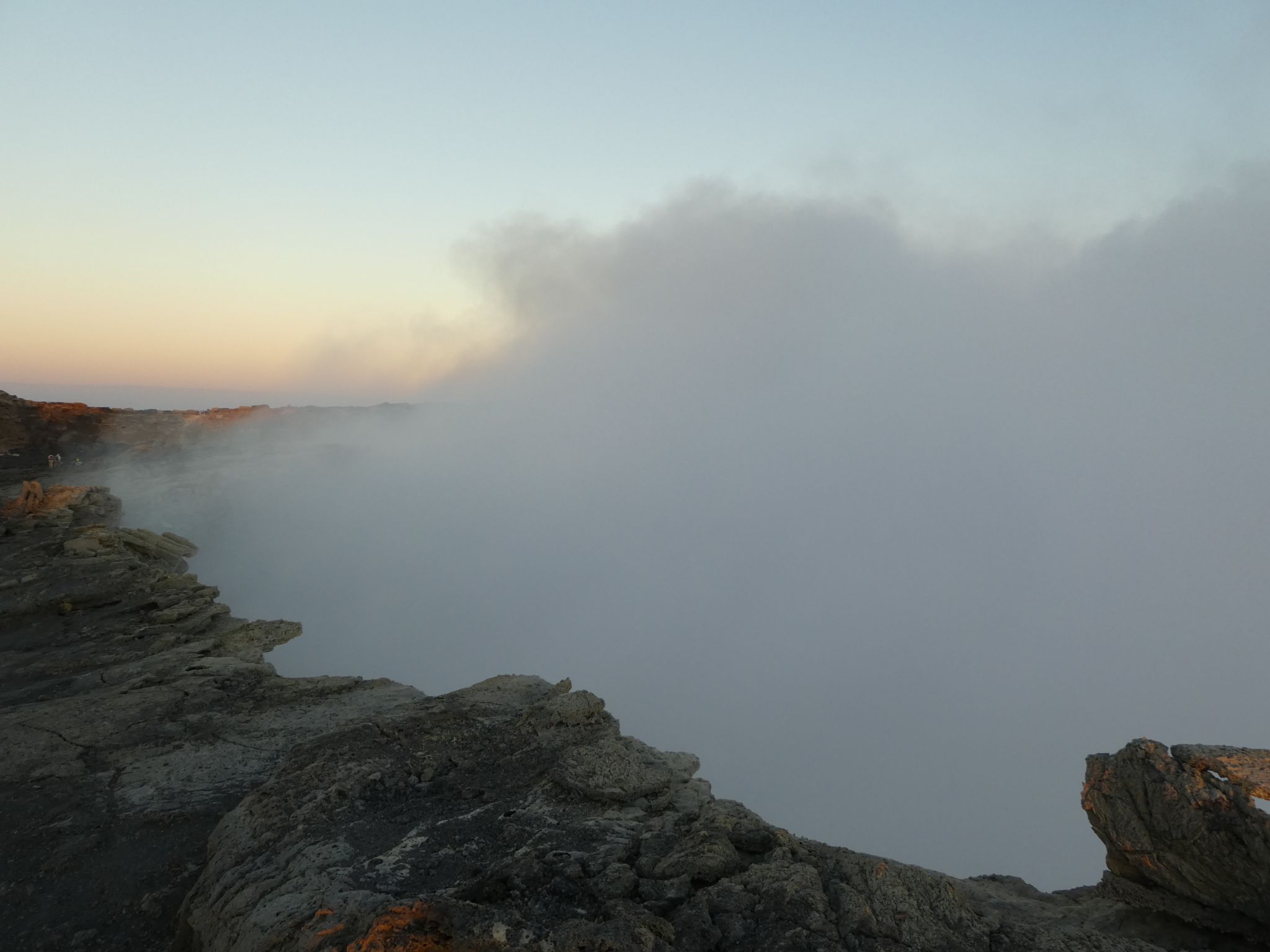 As soon as the sun had risen the guides were urging people to head back down before the day became hotter.  We reached the base at 9am and even by then it was baking hot.

It was a long drive back to Mekele and a night flight to Addis Ababa.  We smelled so bad we wondered if they’d refuse to let us on the plane!  But they did, and so ended our little jaunt around Ethiopia, as next day we caught a flight to Madrid to resume our travels in Europe.