From Madrid we headed south for a loop around Andalusia.

Cordoba rose to prominence as a key centre of the Islamic dynasty which controlled the Iberian peninsula in the 700s.  By the 900s it was the capital of Islamic Spain and the largest city in Western Europe, with a population of over 200,000.

In keeping with the importance, wealth and size of the city, the magnificent Mesquita (Great Mosque) was built here.  400 years later, the Christians reconquered Cordoba on their way to eventually reclaiming the whole of the Iberian peninsula.   The Mesquita was converted to a Catholic Cathdral, which it remains to this day.

The building is considered one of the greatest monuments of Moorish architecture in Spain.  It is easy to see why. 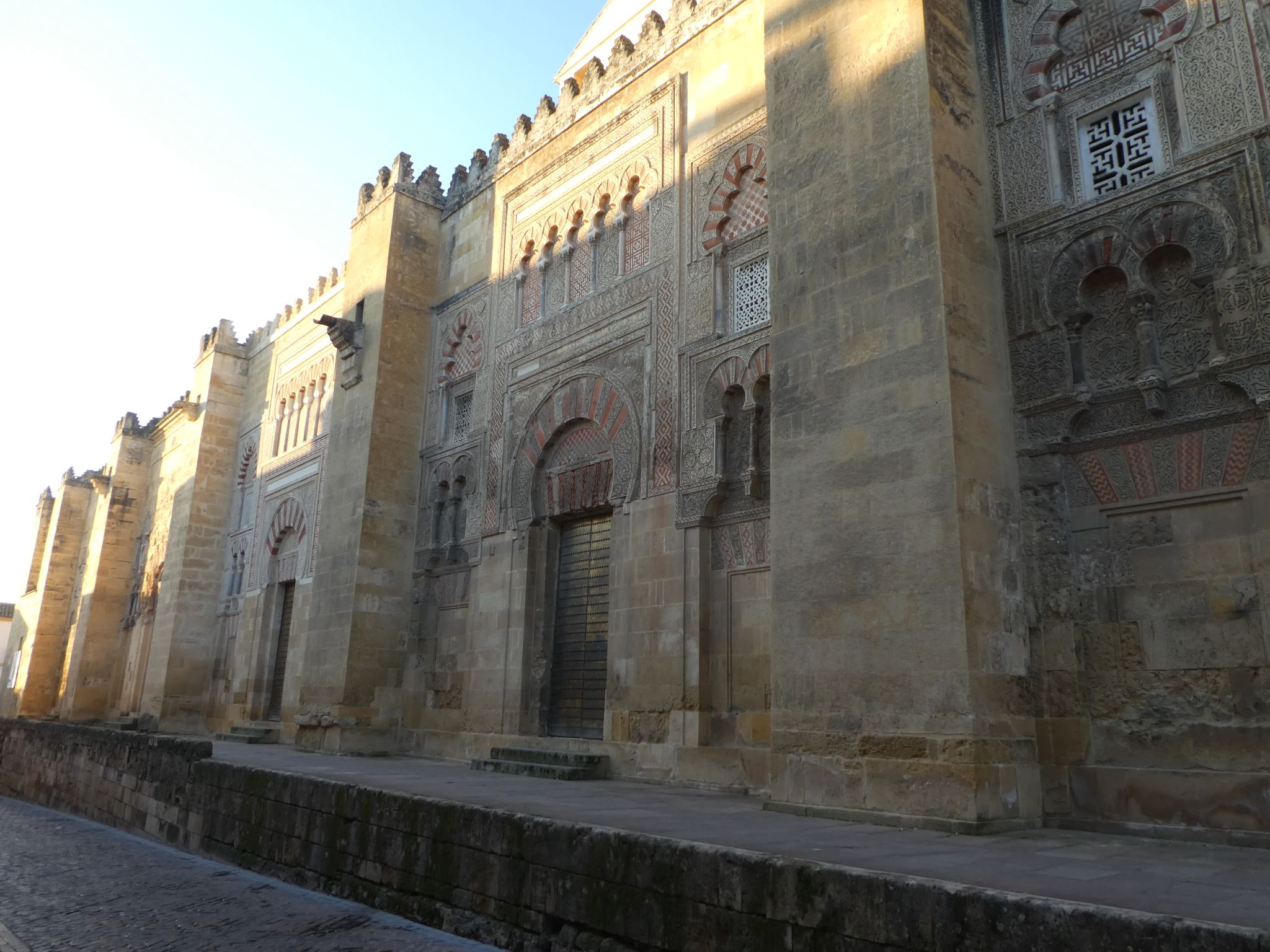 It’s most iconic feature, which dates to its Muslim years, is the central hall with 856 columns of jasper, onyx, marble, porphyry and granite. 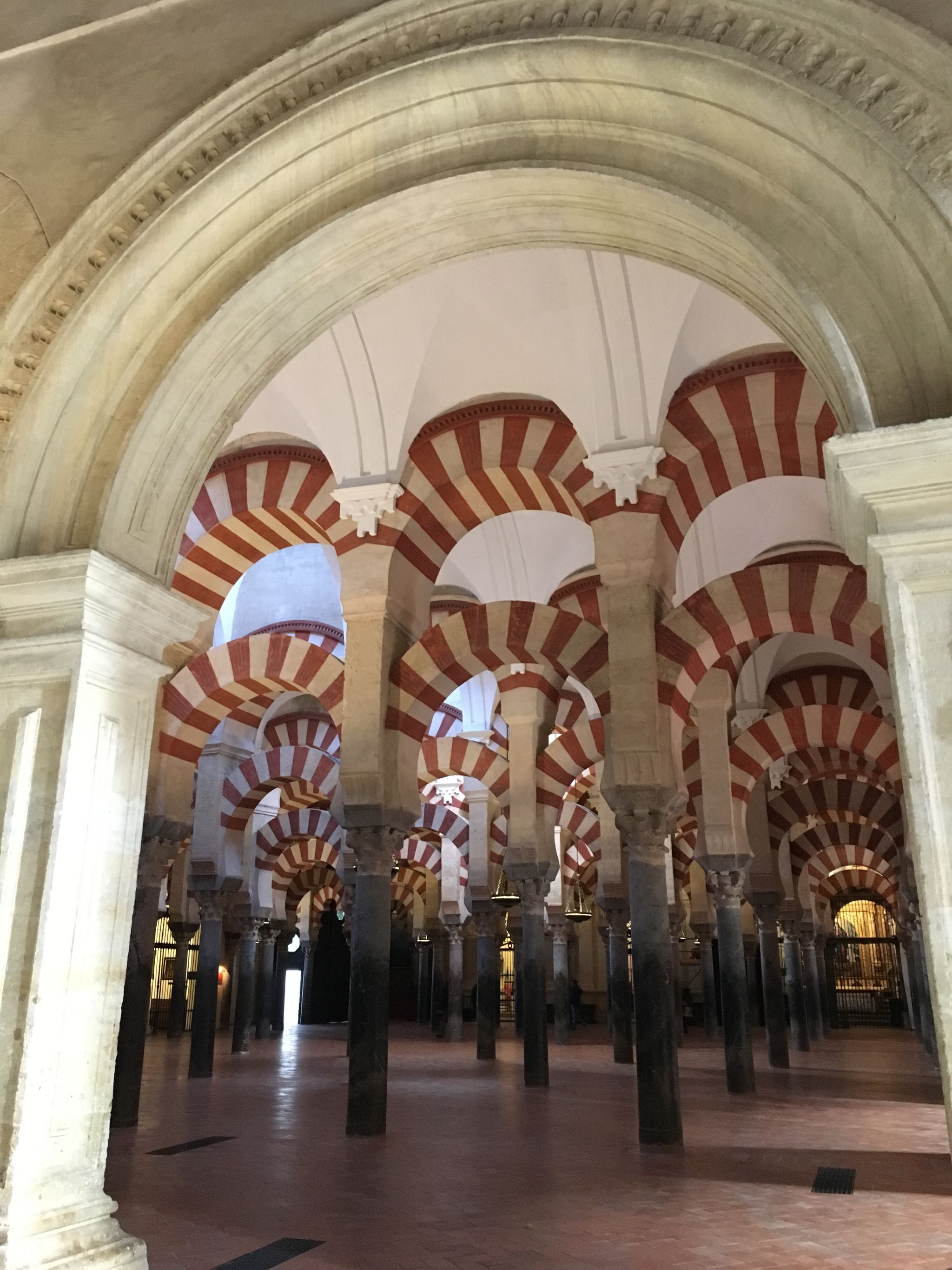 In the 1600s, King Carlos I gave permission for a cathedral to be built inside.  The works continued for nearly 250 years, and in addition to a central church, builders added wall decorations of a more ‘Christian’ style and poked chapels into many of the side alcoves.

The result is a building of exquisite beauty which showcases successive empires, cultures and building styles. 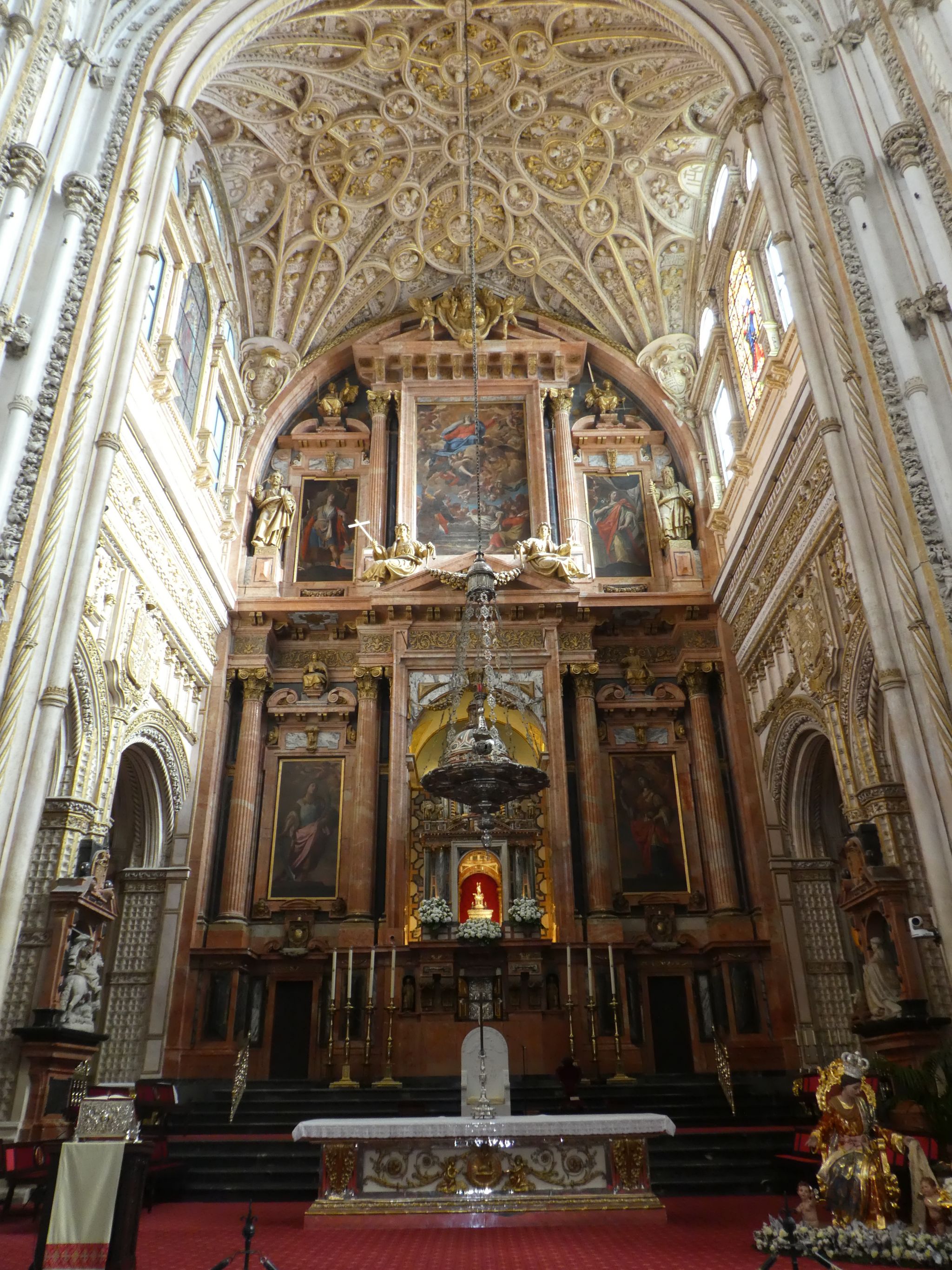 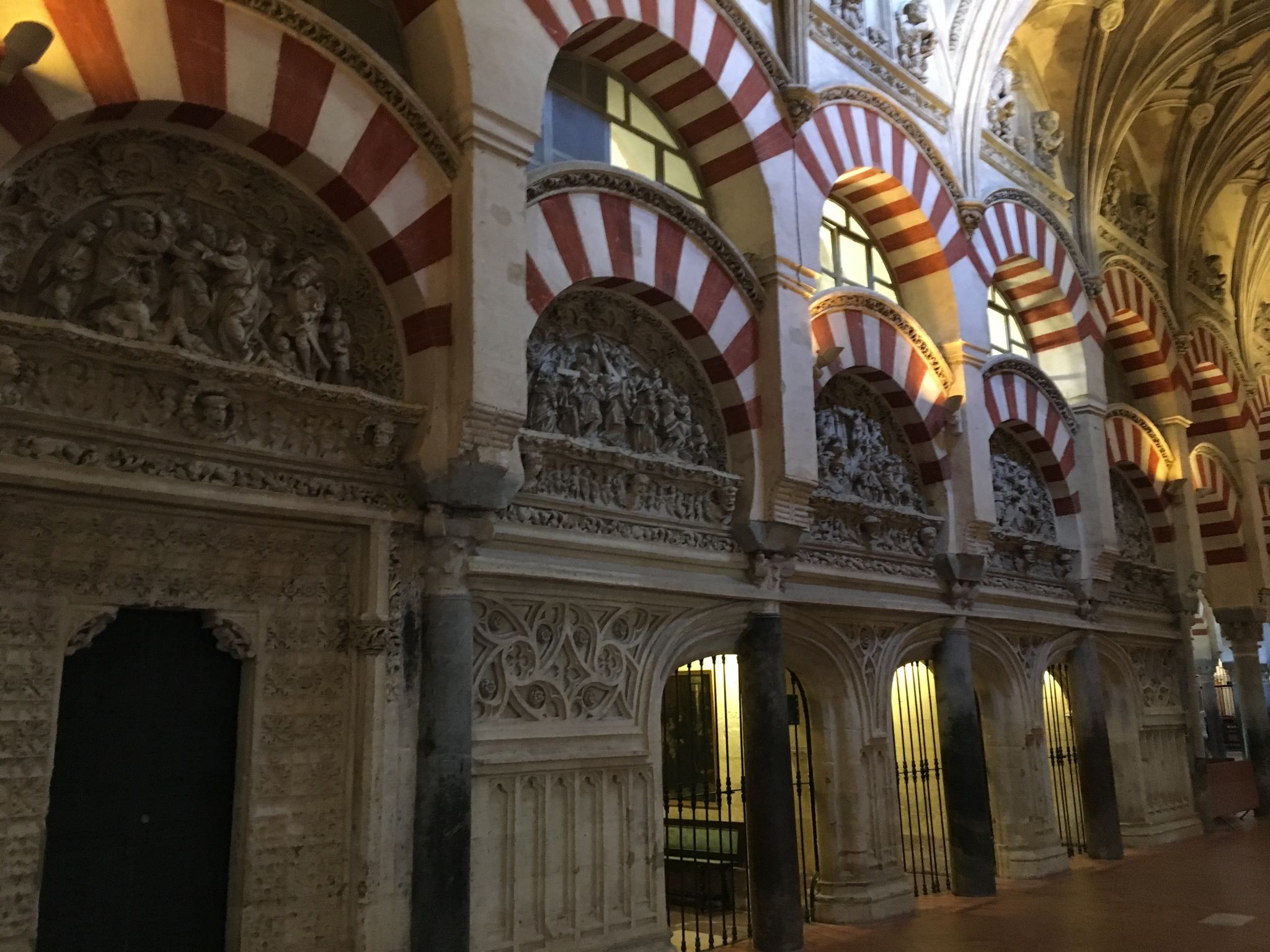 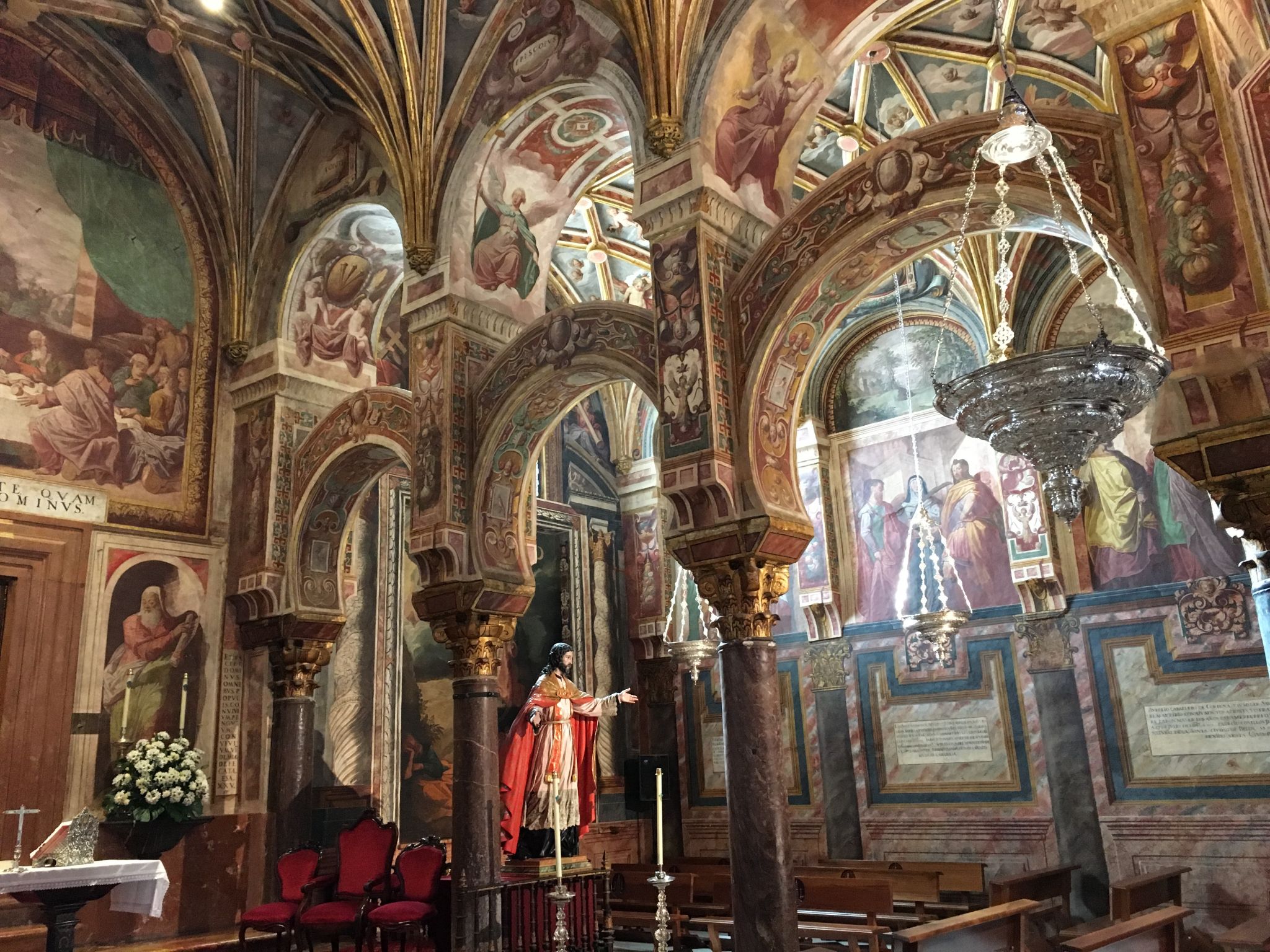 The Mesquita was named a UNESCO World Heritage Site in 1984, and this status was later extended to the whole of Cordoba’s historic centre.  It includes the Alcazar de los Reyes Christianos, a palace-fort built in the 13th and 14th centuries where, in 1486, the monarchs Isabella and Ferdinand met Christopher Columbus for the first time.  The building is unremarkable, but the gardens are lovely and the historical significance of the monarchs’ meeting with Chris is commemorated. 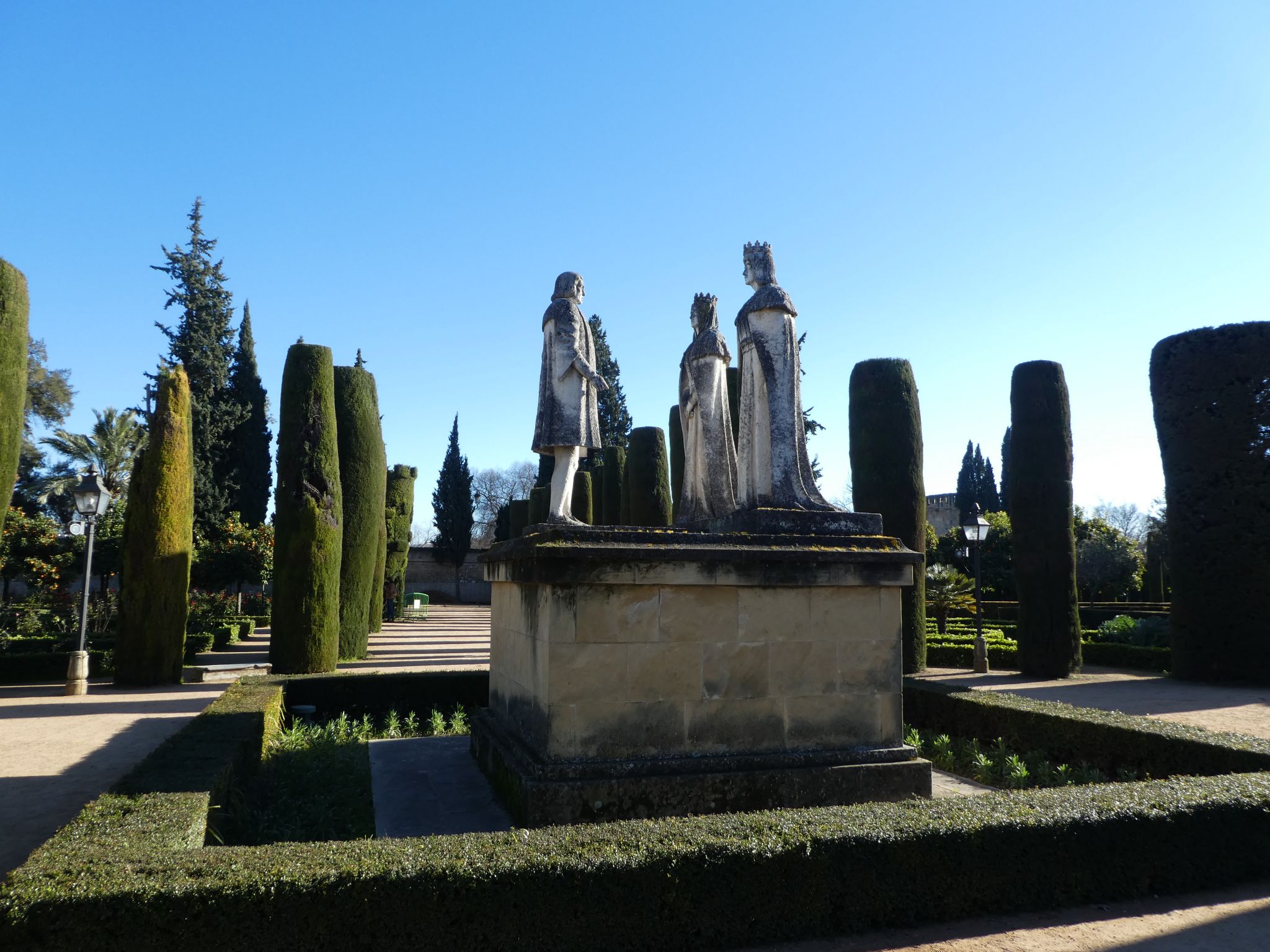 The marvellous 17th century Plaza de la Corredera in the centre of Cordoba has a rich history which includes use as a bull fighting ring and for burnings during the Inquisition.

These days it’s good for a beer in the afternoon sunshine. 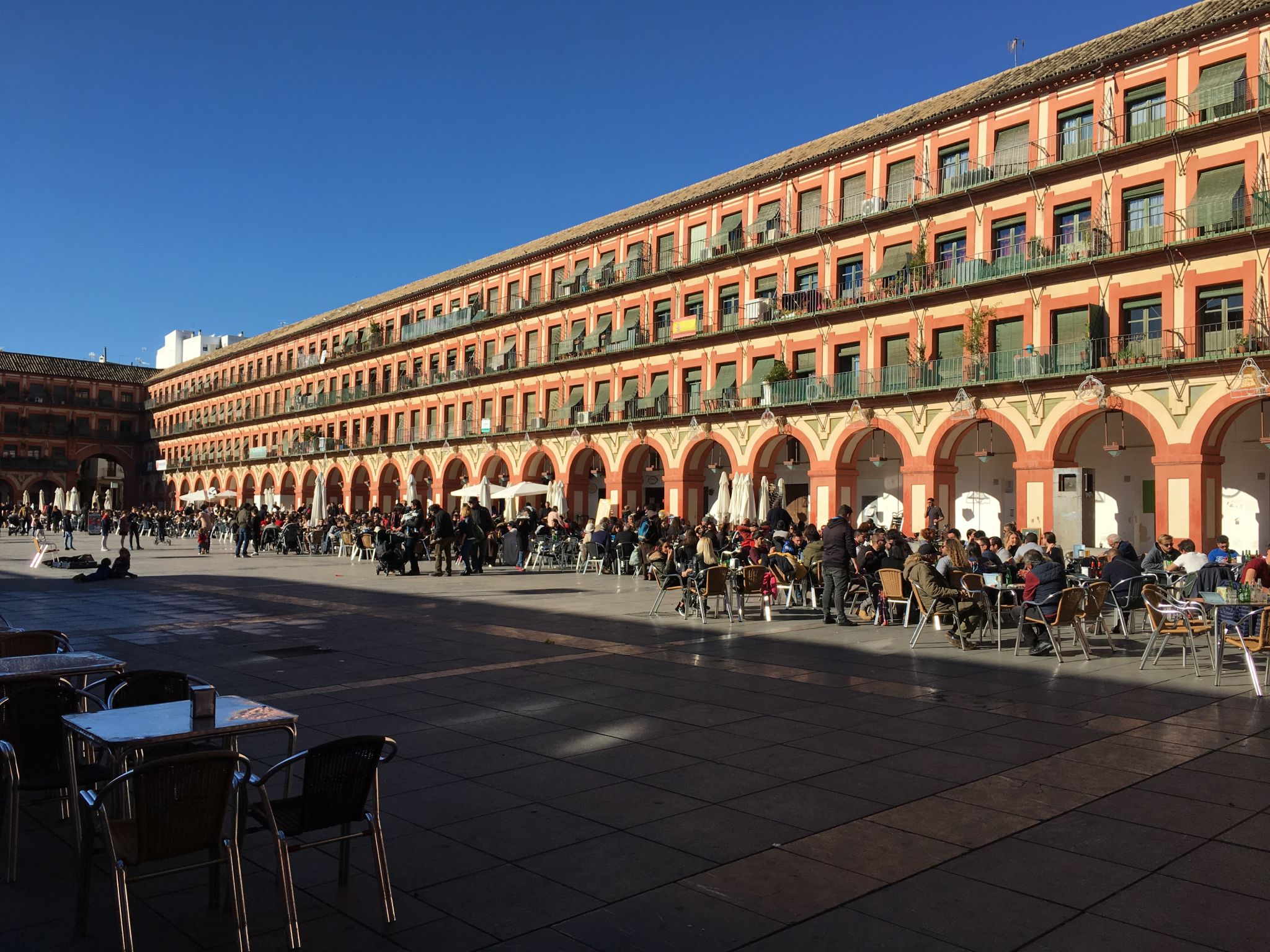 Cordoba has the dubious honour of having the highest summer temperatures in Europe, averaging 37 degrees in July and August.  To manage the summer heat,  not only royalty but many private houses were built with a central courtyard or ‘patio’ filled with plants and water features to keep the house cool.

Today, Cordoba is famous for its patios.  Every spring, when many of them are filled with flowers, contests are held to judge the best, and private homes open their patios for tours.  We were much too early for this – May is the season – but Palacio de Viana is open year round.  This former Renaissance palace boasts 12 patios, including the charmingly named Courtyard of the Cats and the Courtyard of the Bars.  More greenery than flowers, it didn’t matter that Spring has not yet sprung. 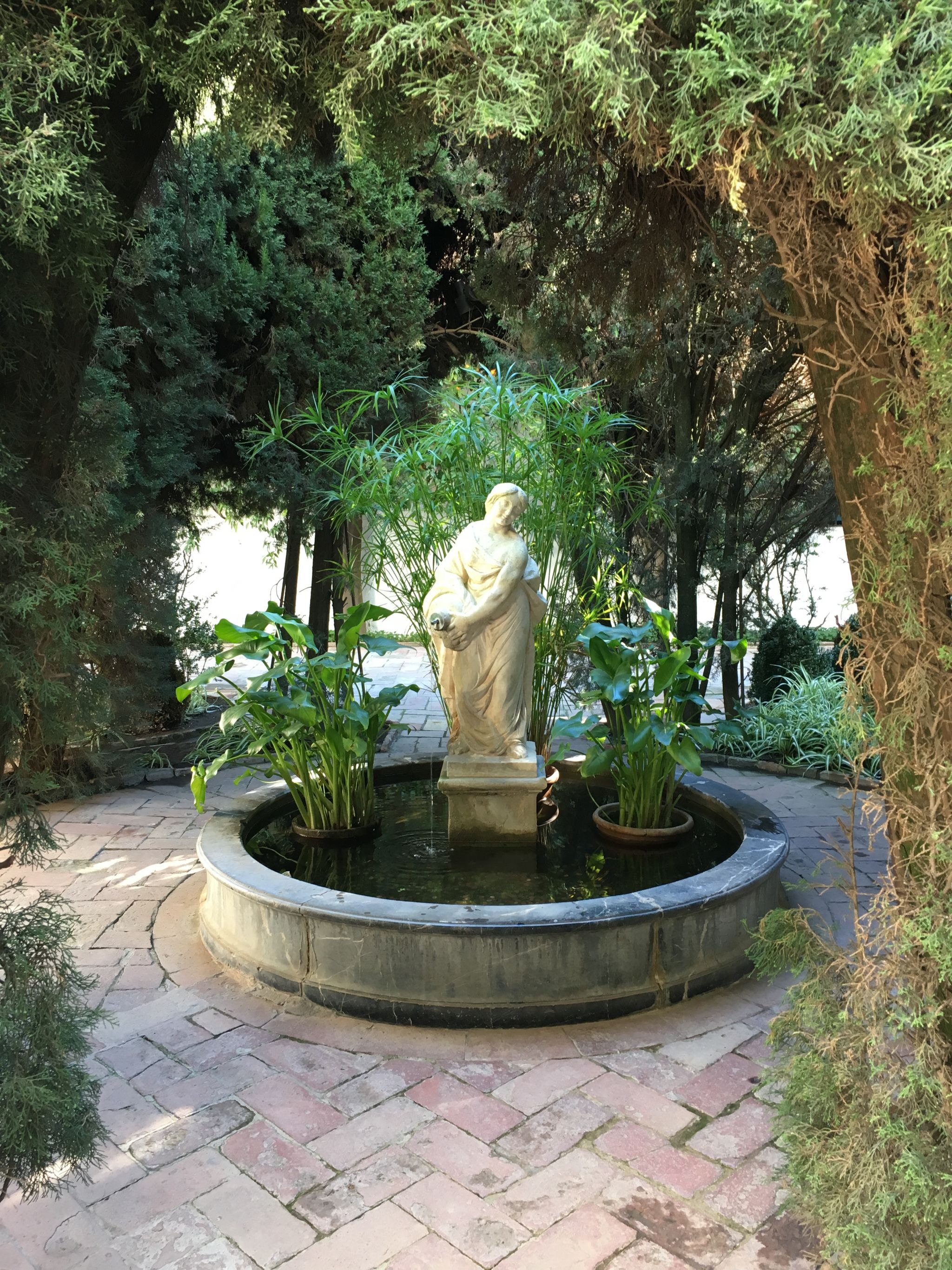 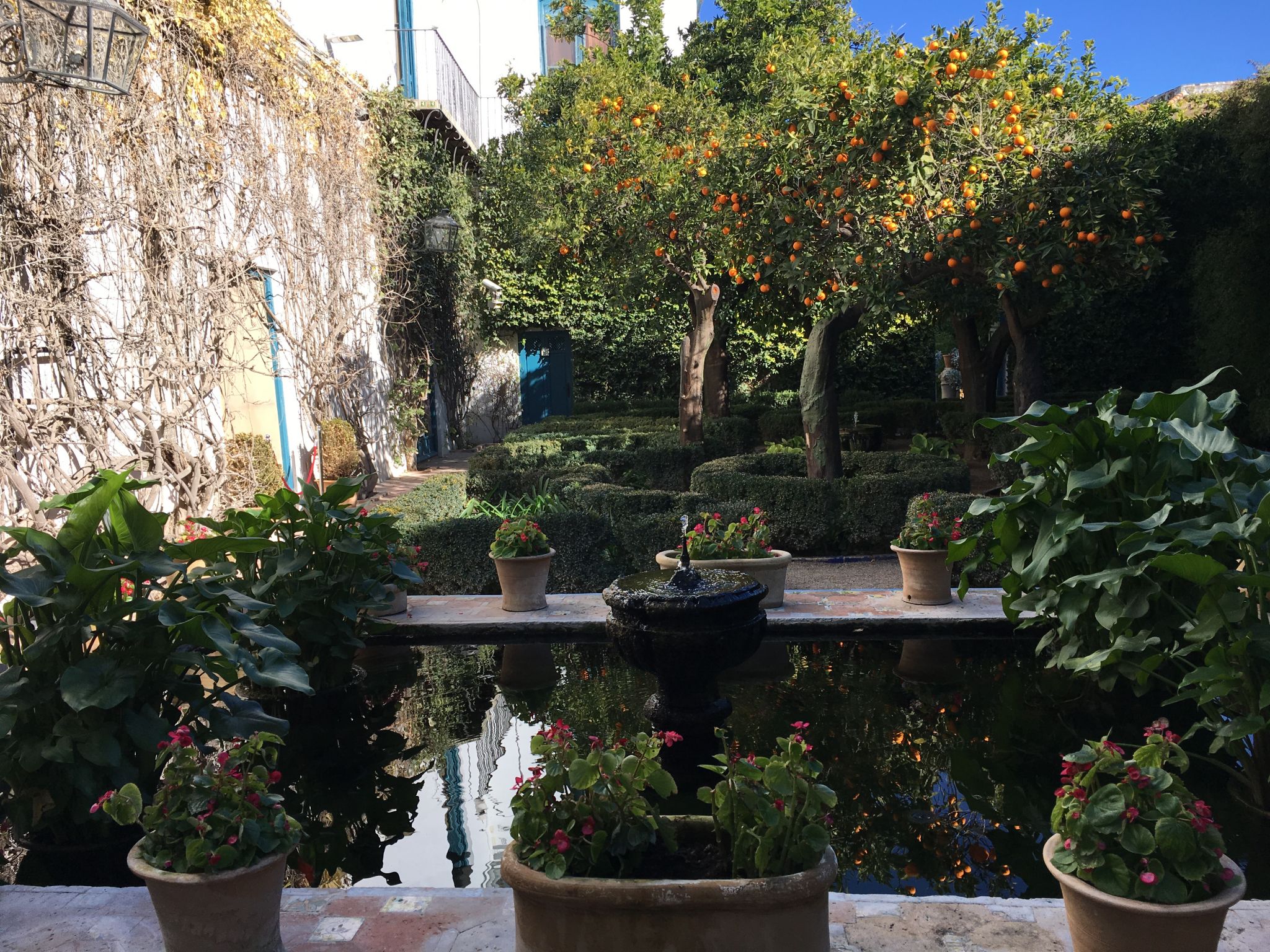 On 2 January 1492, 700 years of Moorish rule in Spain ended when the last sultan, Boabdil, surrendered following an eight month siege of Granada by the forces of the Reys Catolicos (the Catholic Monarchs), Ferdinand and Isabella.

Leaving on horseback with an entourage of about 100 after finalising the terms of surrender, Boabdil paused on a hill overlooking Granada and wept.  His mother proclaimed “Weep like a woman for what you could not defend as a man”.

Thanks, Mum.  It’s important to have a supportive family in times like this.

A stone now marks the site of ‘the Moor’s last sigh’.

Just ten years after Boabdil’s departure, and in breach of the surrender agreement, the Catholic Monarchs signed an order mandating that Moors must either convert to Catholicism or emigrate.  Many left for North Africa.  Others converted but were persecuted or expelled anyway and others continued to practice their Muslim faith covertly.

500 years later there remains an unmistakable Moorish influence in Granada.  In its food, its architecture, the teterias (Moroccan style tea houses) dotted throughout the old city, the interior decoration and soft furnishings, even in the clothes, shoes, jewellery and trinkets for sale in the markets.

And of course, in the Alhambra.  This UNESCO World Heritage listed citadel-palace complex is huge, and the stunning Palacios Nazaries is the most renowned Islamic building complex in Spain. 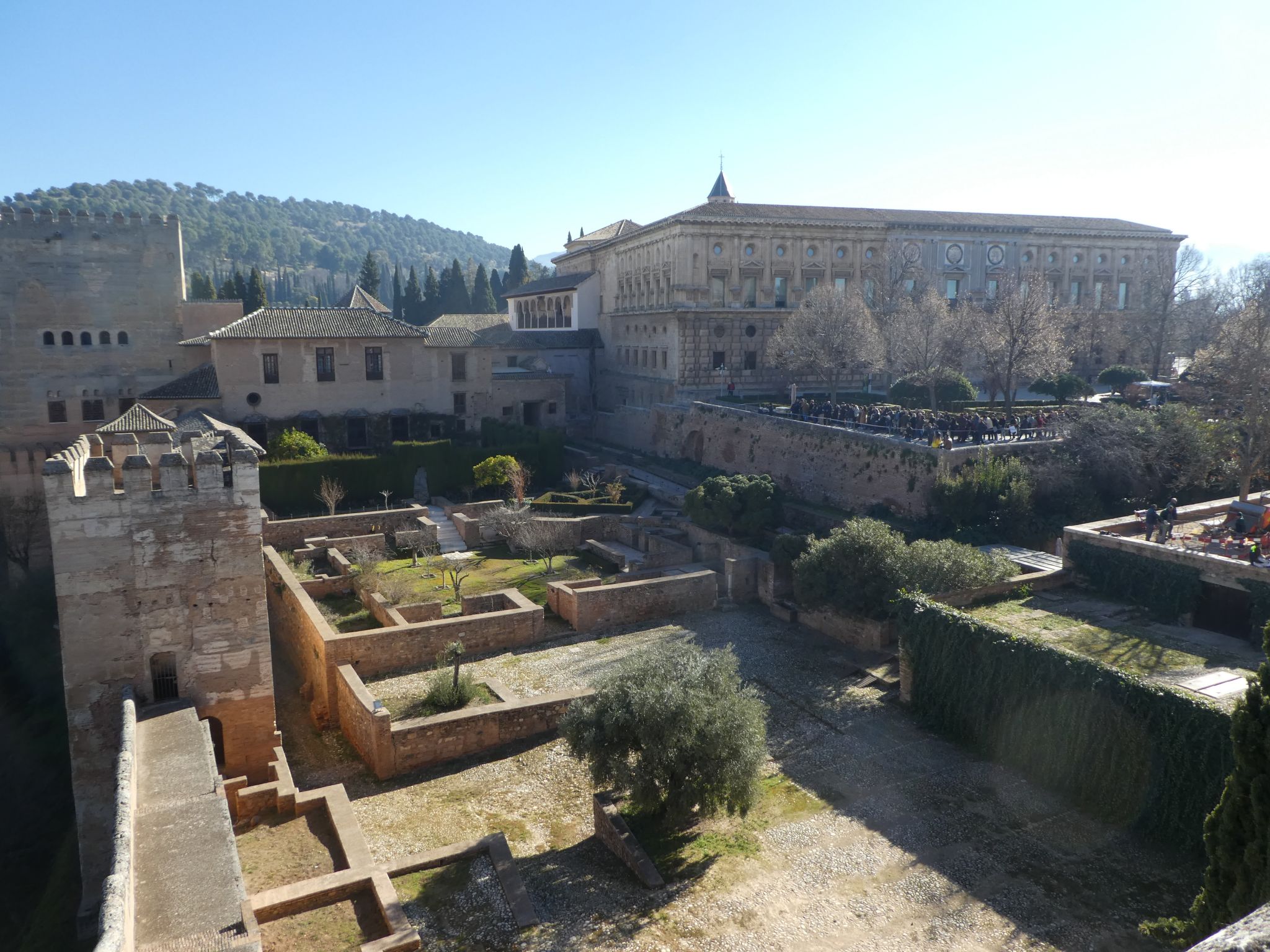 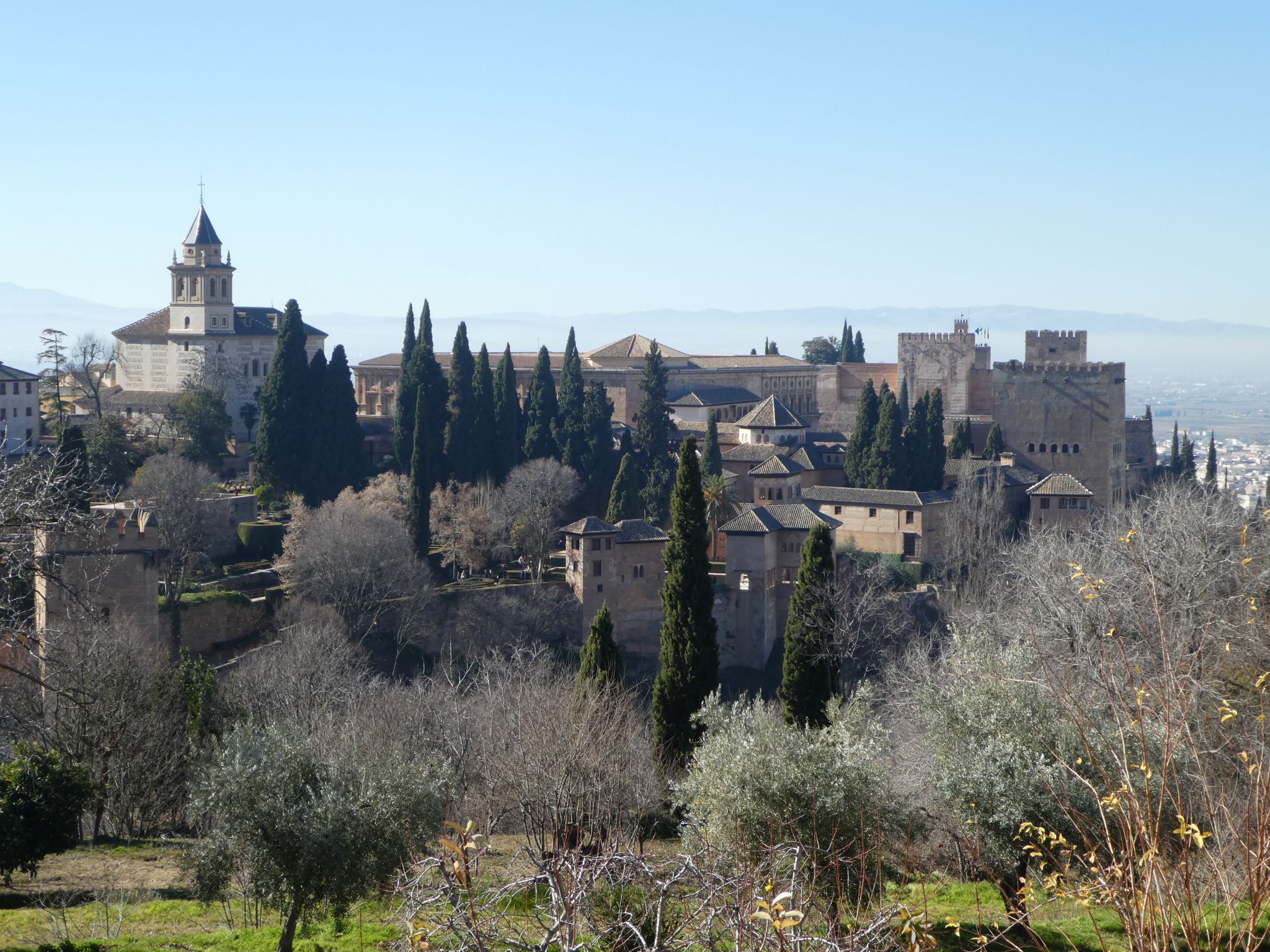 Following their successful takeover, Ferdinand and Isabella lived here and further major works stamped a Christian style on things but the essential Moorish features were retained, creating an intriguing blend of cultural and architectural influences.

Beautifully restored, it is one of the south’s biggest tourist destinations, and rightly so.  We have visited Moorish palaces and mosques in Morocco and across North Africa, but have to say the intricacy of the work here and the meticulous restoration, are a step above anything else we have seen. 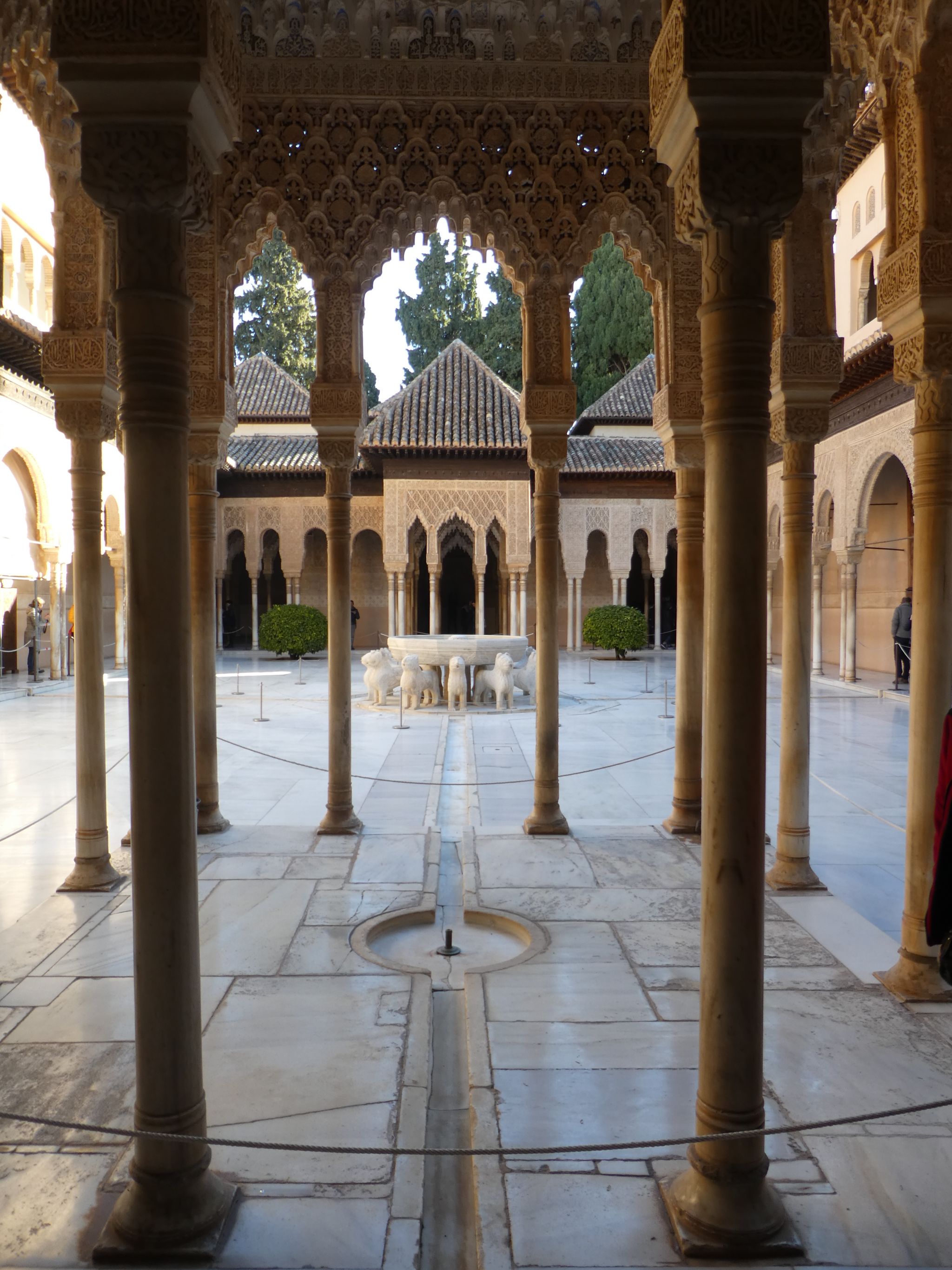 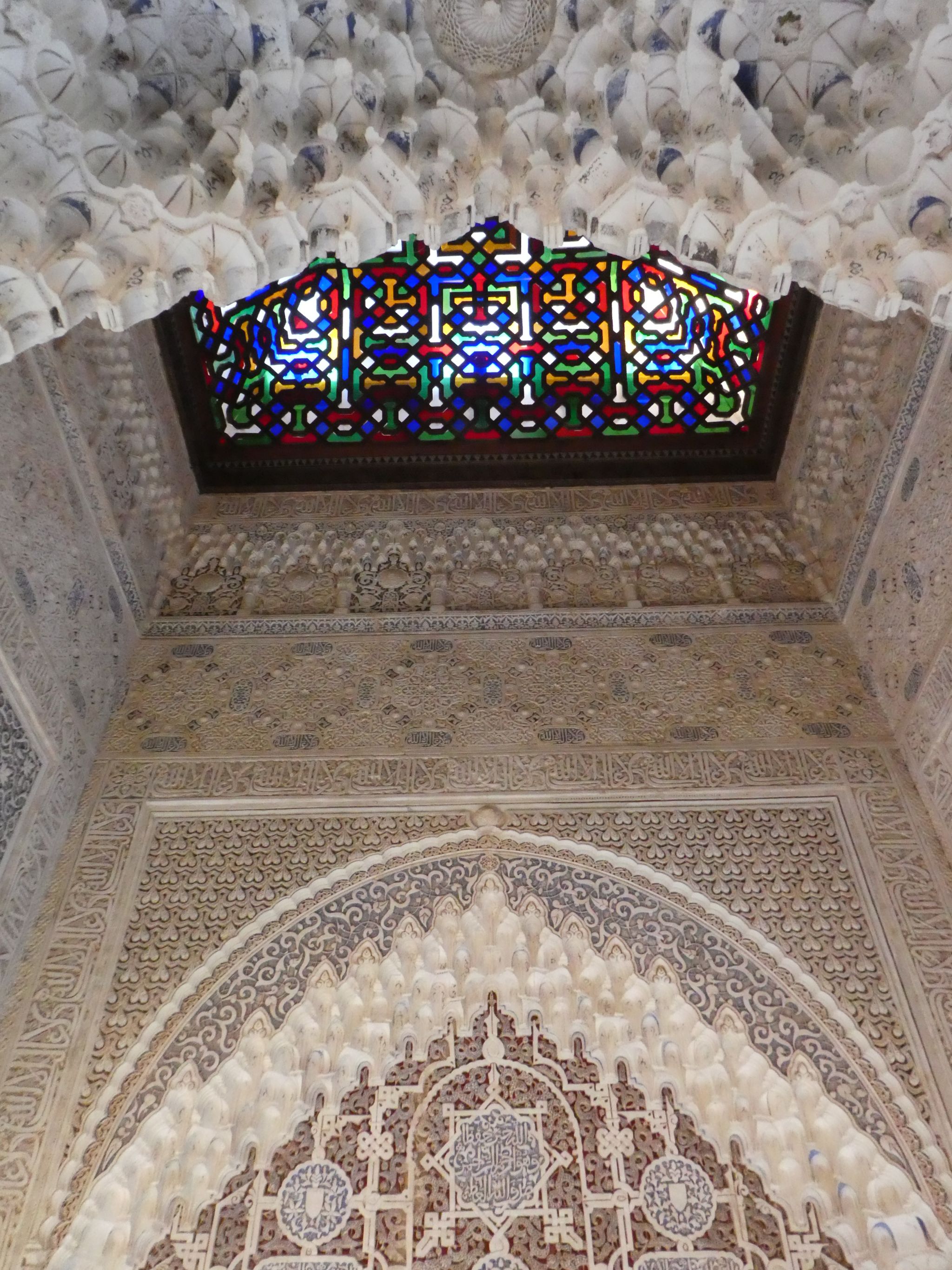 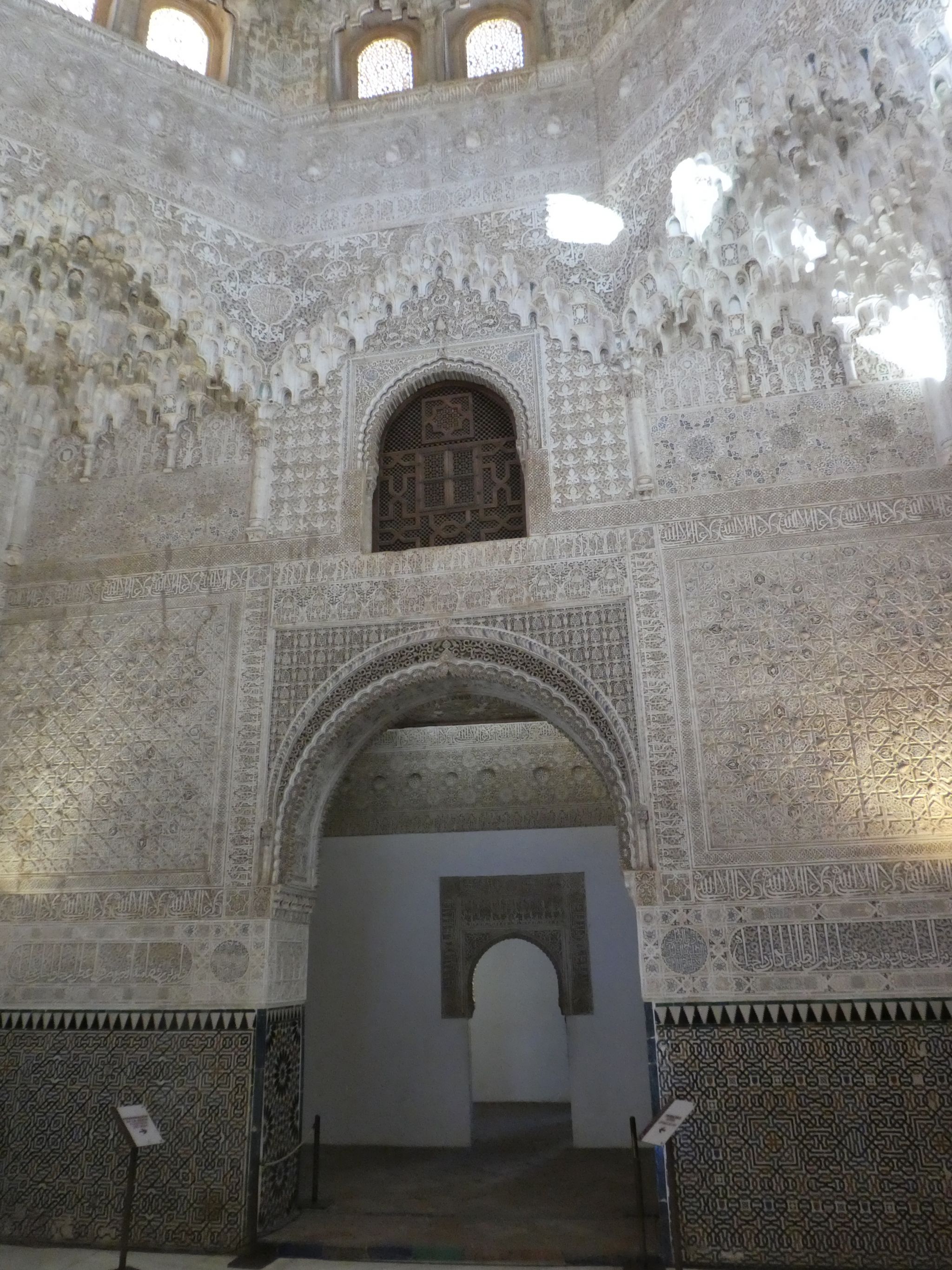 The gardens are beautiful and the former sultan’s summer estate, the Generalife, is a green haven of gardens, pools and patios. 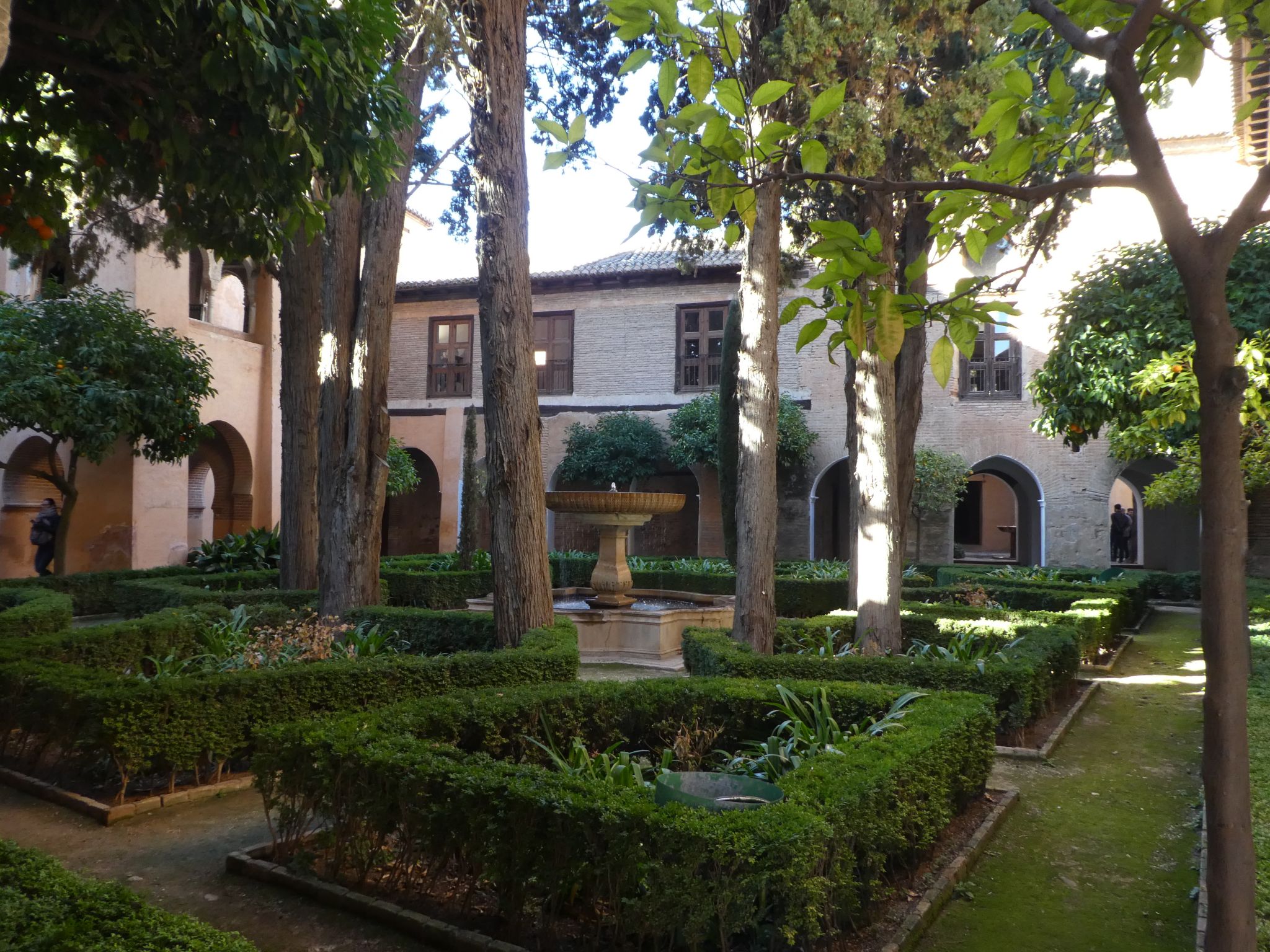 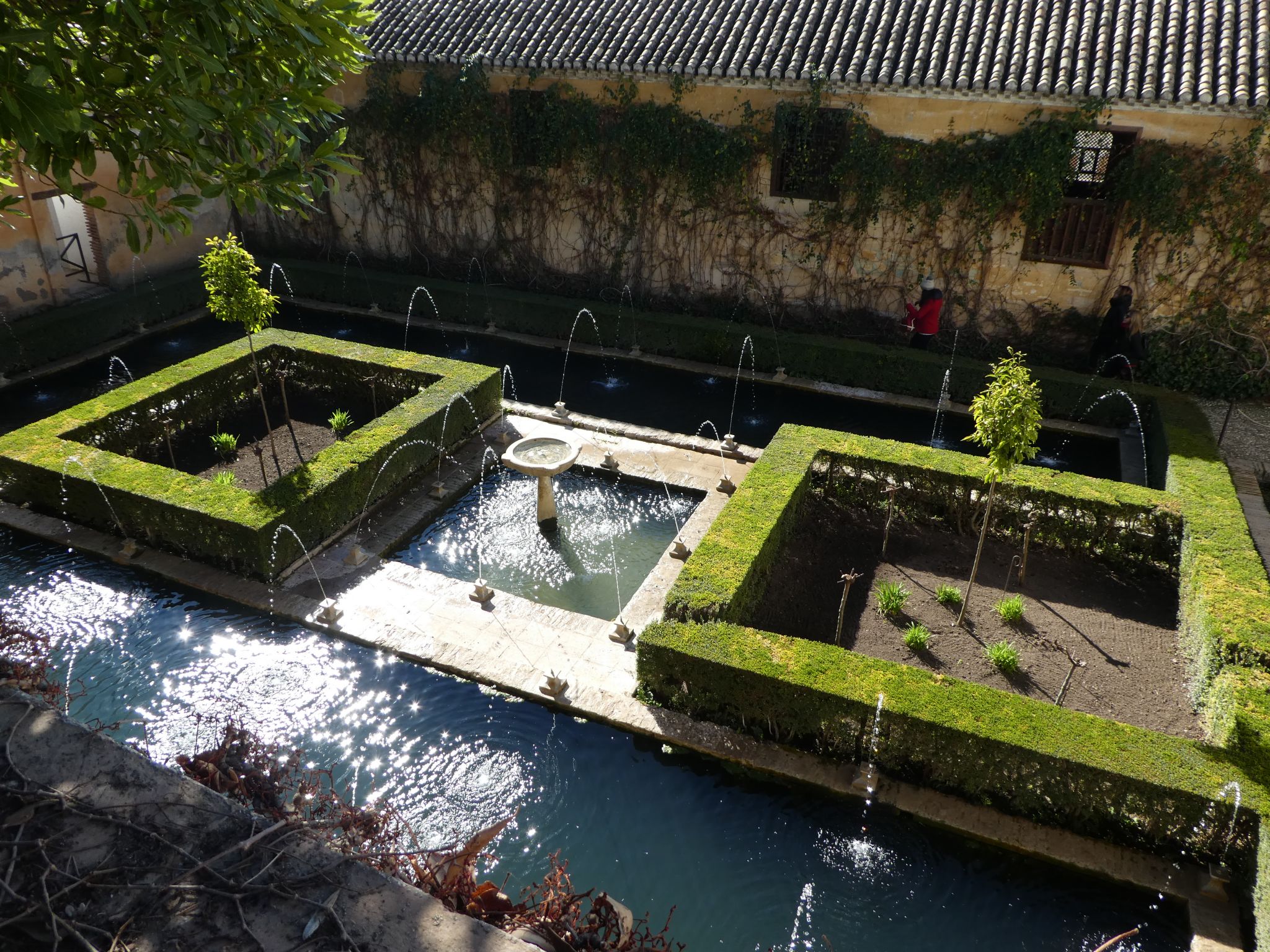 Like all good Boy Scouts, Ferdinand and Isabella believed in ‘being prepared’, so they commissioned a grand chapel where they would be interred when they died.  Either building works were slow or they shuffled off earlier than they expected.  The Capilla Real was not finished until 1517.   By then, Isabella had been dead 13 years, and even Ferdinand died a year before completion.  Their bodies remained at the Alhambra in the meantime, but if the grandeur of the Capilla Real is anything to go by, it was worth the wait. 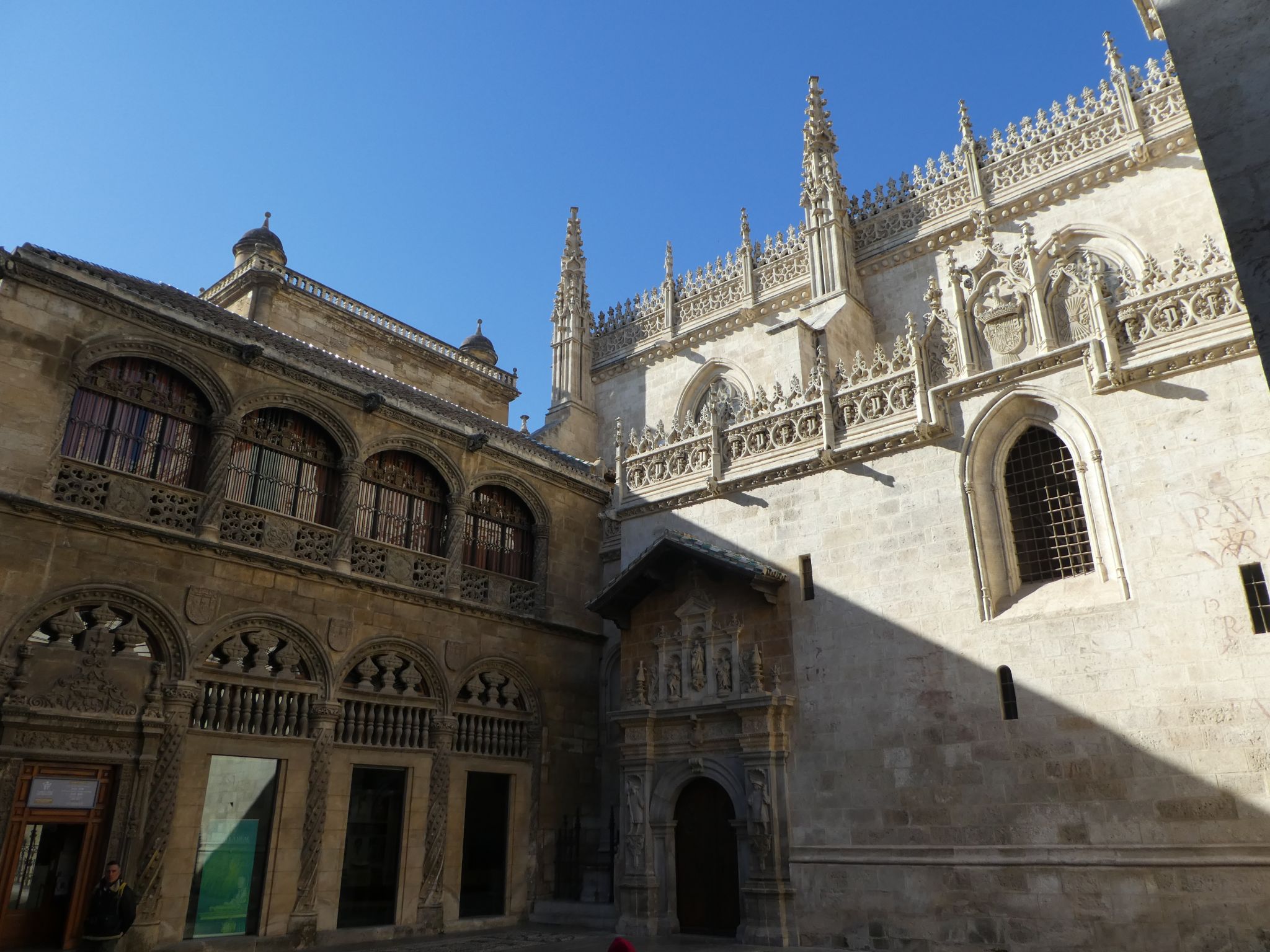 Unfortunately photos are not permitted in the crypt, where the monarchs rest in lead coffins beneath a marble mausoleum comprising a lavishly decorated, elevated plinth on which lie larger-than-lifesize figures of themselves with relaxed lions at their feet.  We had to make do with photos of the adjoining Cathedral, which was similarly ornamental.  White marble pillars, baroque decorations, 30 metre high domed ceiling. 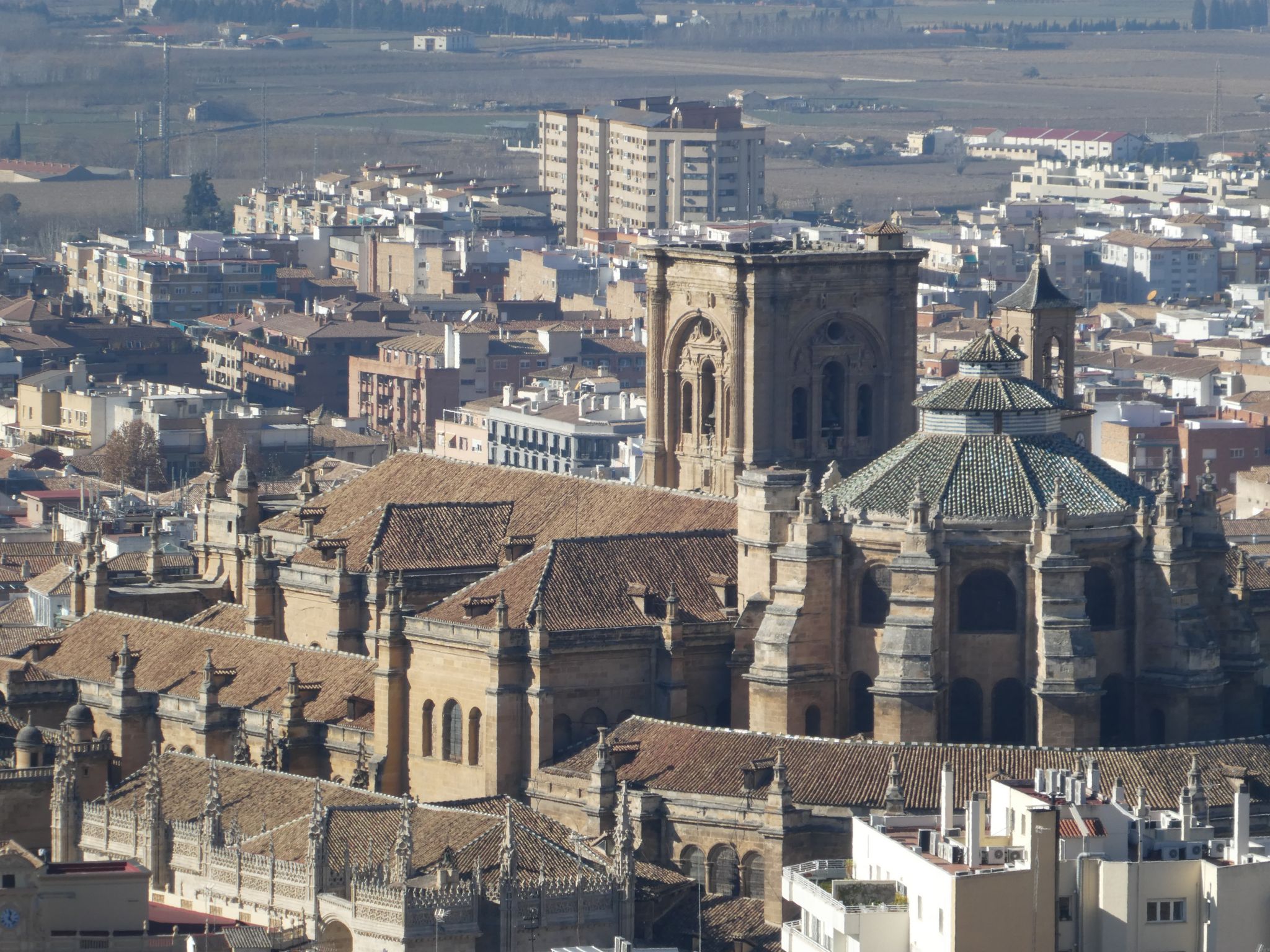 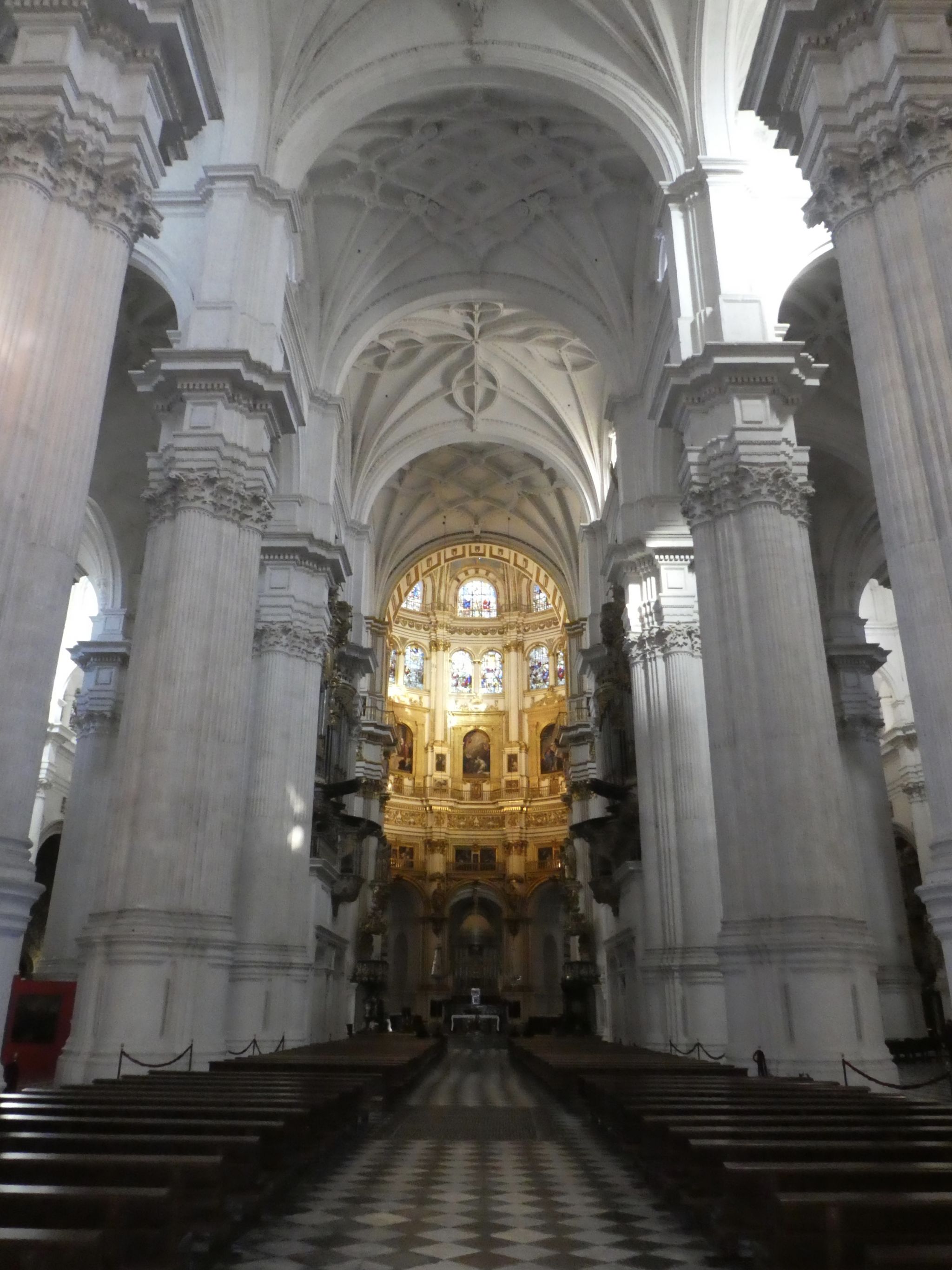 There are dozens of other grand churches, gardens and convents – a testament to the wealth that flooded in during the city’s heyday.  But Granada isn’t all about culture.  One of it’s most appealing things is its tapas bar culture.

It’s one of the few places left in Spain which retains the tradition that when you order a drink, you get a tapa for free.  Order another drink, get another tapa.  In theory, you never need to actually buy food, although in that case you might find yourself permanently inebriated.

Although size varies, the tapas are more than just a bite.  In one place, with each glass of red wine we received a mini-burger and small pile of fries.  When the wine costs €2.50, it’s a mystery how they do this for the price.  In moderation, it’s a very civilised way to spend an afternoon and/or evening.  And we did.

Despite being the largest city on the Costa del Sol, Malaga is not all about cheap British package holidays to the sunny Mediterranean coast.  In fact, if you stick to the historic centre, you won’t see much evidence of that aspect at all.  Plenty of British accents wandering about, but the old town remains resolutely Spanish.

Malaga was the birthplace of Picasso and, as such, is home to Museo Picasso Malaga.  Housed in a 16th century palace, and with more than 200 works by Picasso donated or loaned by his daughter in law and grandson, this museum is unmissable.  If you are a Picasso fan, that is.  If you don’t fancy paintings of cross-eyed women looking sidewards out of their foreheads, maybe not so much.

Malaga also has a Moorish fortress, the Alcazar, accurately described as a mini-Alhambra. 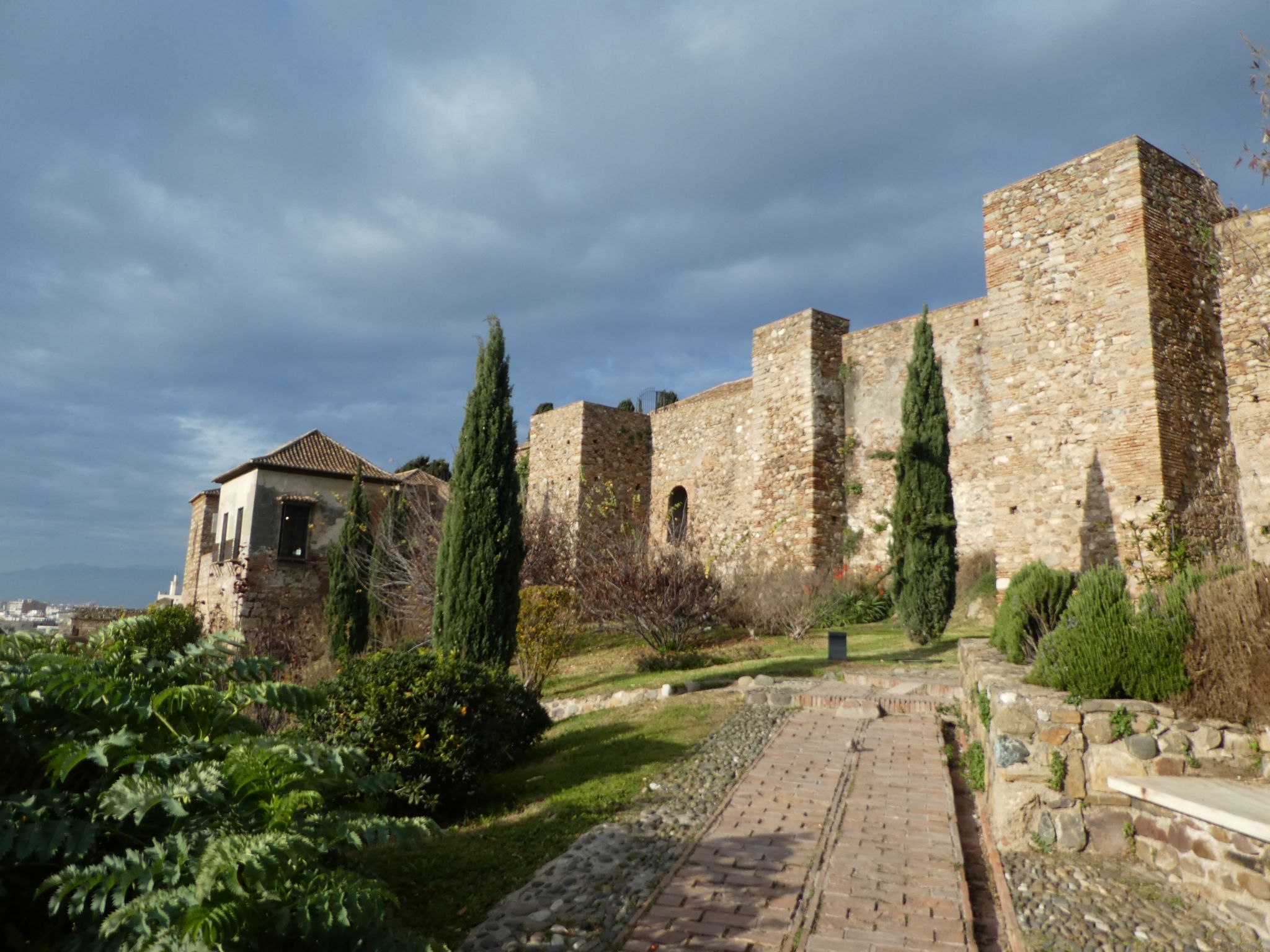 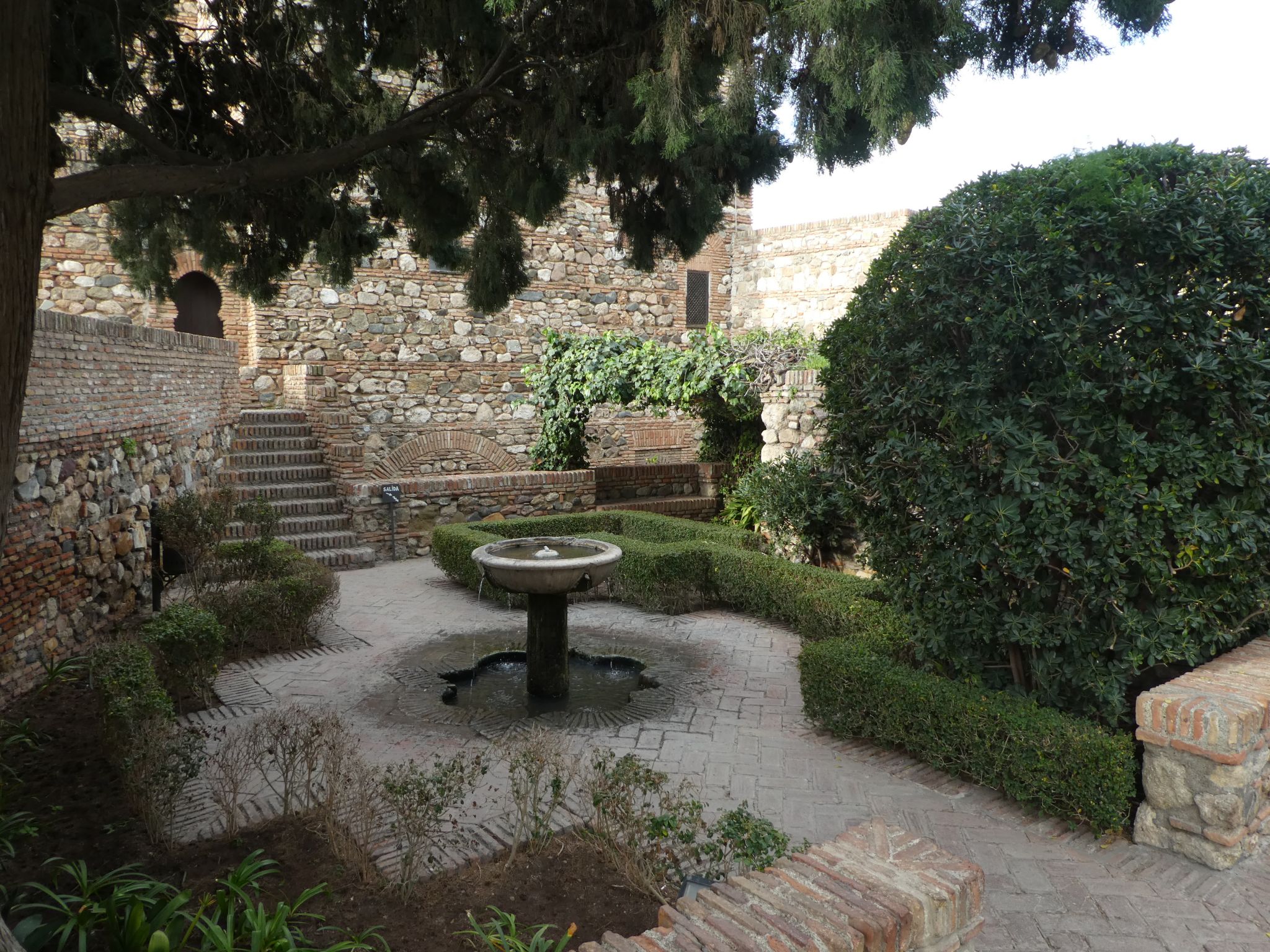 And like any major Andalusian (every Spanish?) town, a massive cathedral. 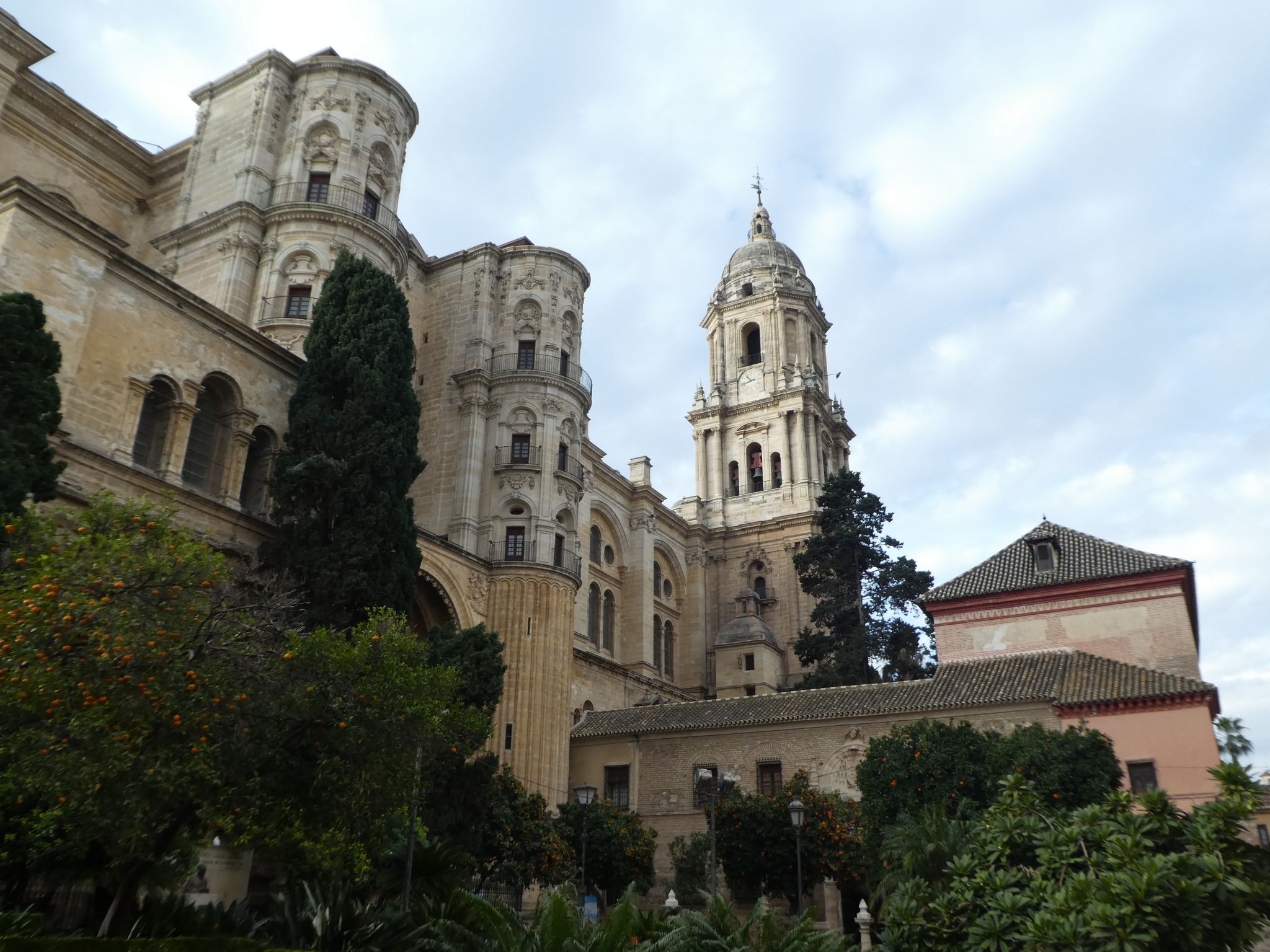 The historic centre is largely pedestrianised and there are many days’ worth of opportunities to explore exquisitely clean, spruced up cobblestone laneways full of tapas bars, restaurants, shops, historic edifices and genteel apartment buildings. 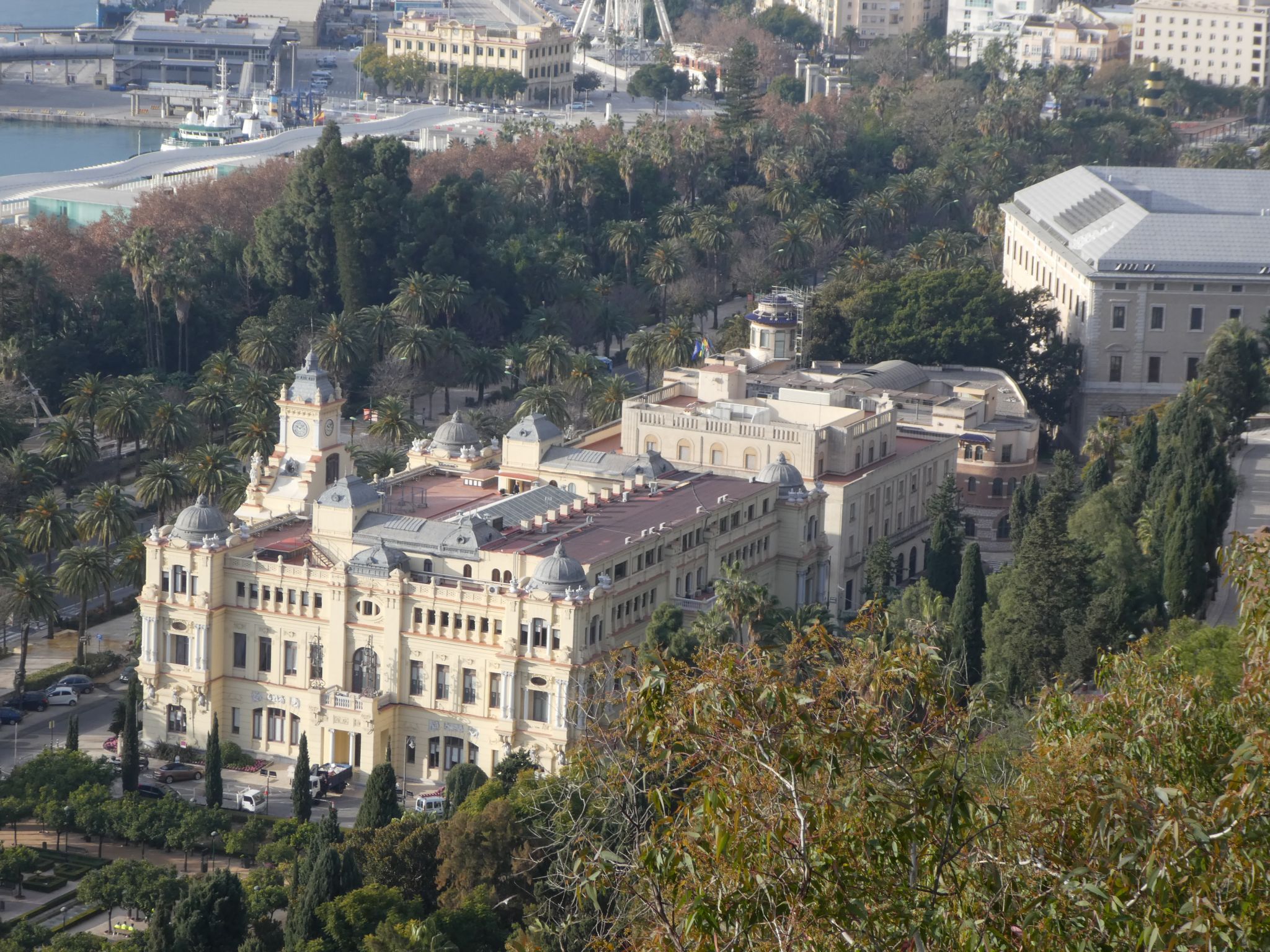 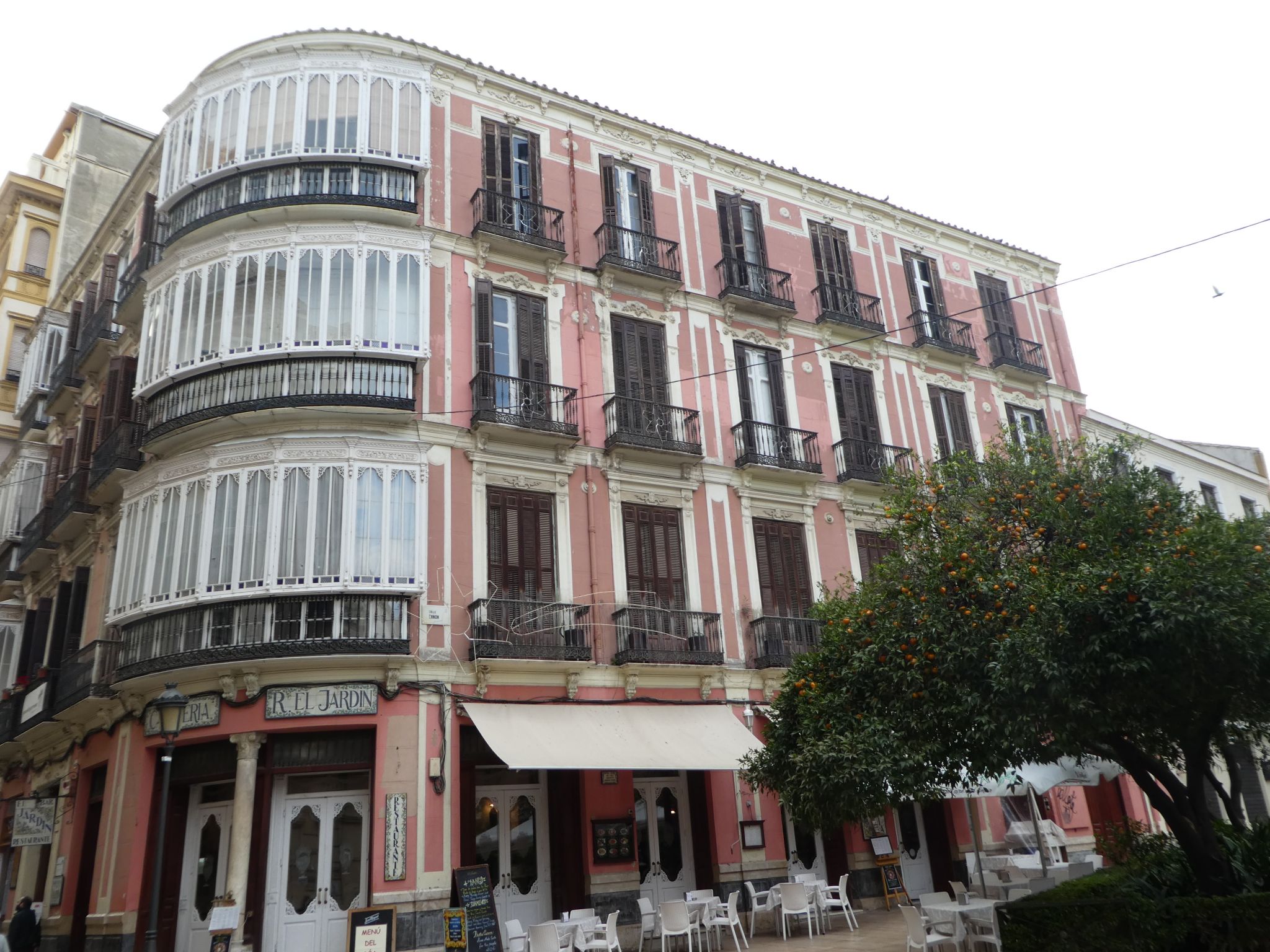 Yes, it’s touristy, but more authentic if you head off the main boulevards and get lost in the lanes.  And we had some of the best food we’d had so far in Andalusia.

We regretted not having another day in Malaga, but Julie had fallen victim once again to the siren call of monkeys and we headed down the coast to Gibraltar.