As the road from Malaga to Gibraltar snakes around the coast, the green hills rolling down to the sea are pock-marked with high density resort and townhouse developments.  Not actually near the sea, and often on the other side of the multi-lane highway.  We couldn’t see the appeal.  There are English language billboards galore with advertisements for these developments, and for shops selling English brands and restaurants serving English style food.   You could be forgiven for forgetting you are in Spain at all.

The bus terminates in La Linea de la Concepcion.  From the bus stop it’s a short walk to the border – just head toward the big rock.

Once over the border, there’s an interesting arrangement.  It’s the only place in the world where a four lane highway crosses an operational airport runway.

There’s boom gates and the road is closed for about 10 minutes every time a flight comes in or out.  This adds up to about two hours of closure every day.  A tunnel is being built which will take the road under the runway, but it was supposed to be finished by the beginning of 2009 and it’s still a work in progress.

The only pedestrian access is also across the runway.  And that will remain the case even when the tunnel is complete.  Look carefully before crossing!

Gibraltar is a British Overseas Territory.  It was first settled by the Moors in the Middle Ages, later ruled by Spain, and then ceded to the British in 1713.  In 1967, Gibraltarians voted to remain under British sovereignty.  In 2002, a referendum proposing joint sovereignty with Spain was rejected by 99% of voters.  But in the Brexit referendum in 2016, 96% voted Remain, clearly wanting to remain a part of Europe.  Interesting times ahead.

Gibraltar is small.  Just 6.7 square kms, with the 426 metre high Rock towering over everything.  At more than 5km in length, it’s more a ridge than a rock. 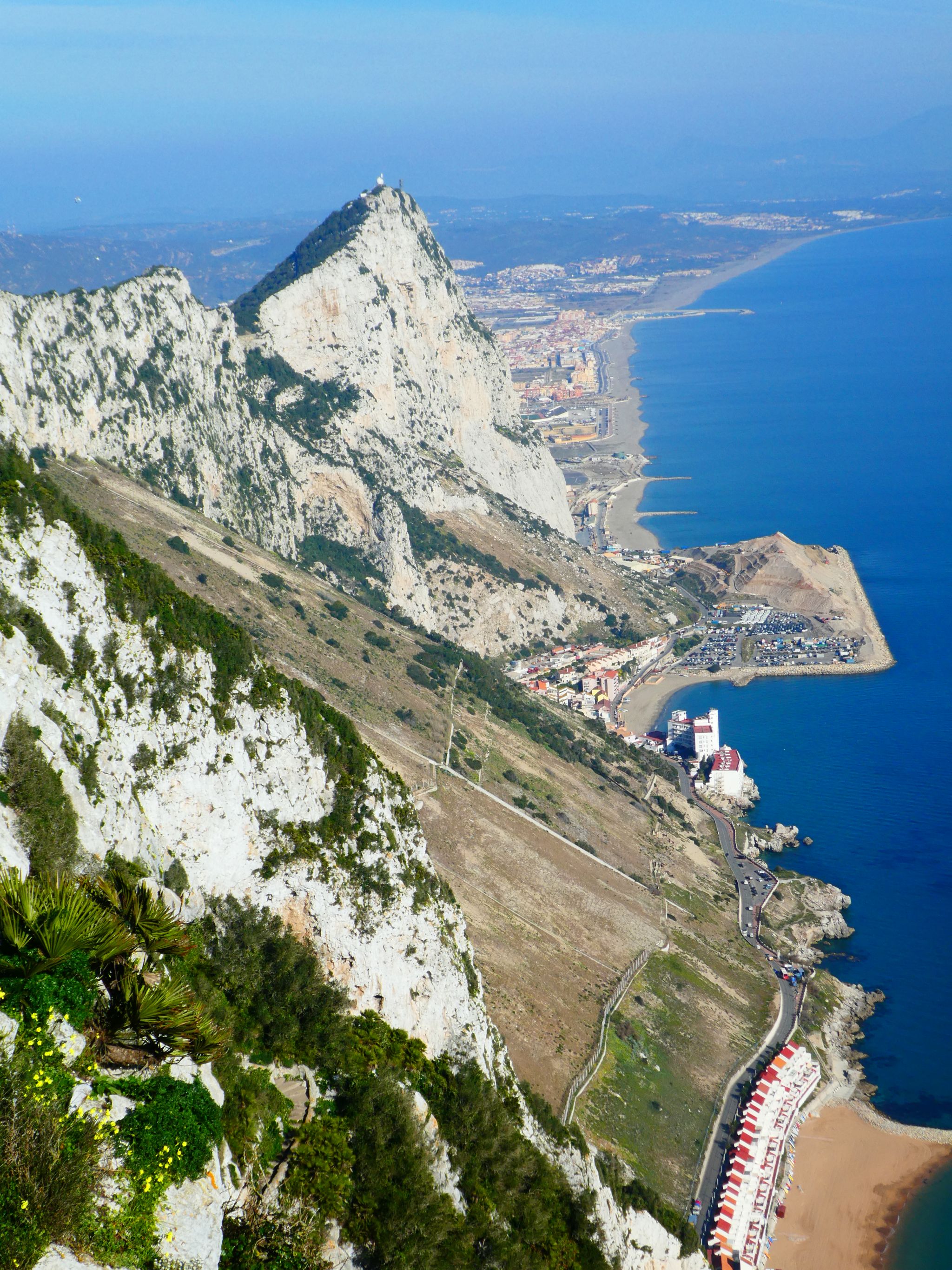 The town is a curious mix of English-ness which has disappeared from most of Britain – think red telephone booths and Royal Mail post boxes – with a splash of Spanish culture thrown in.  There’s plenty of English style pubs with humorous names selling pints of ale and serving fish and chips. 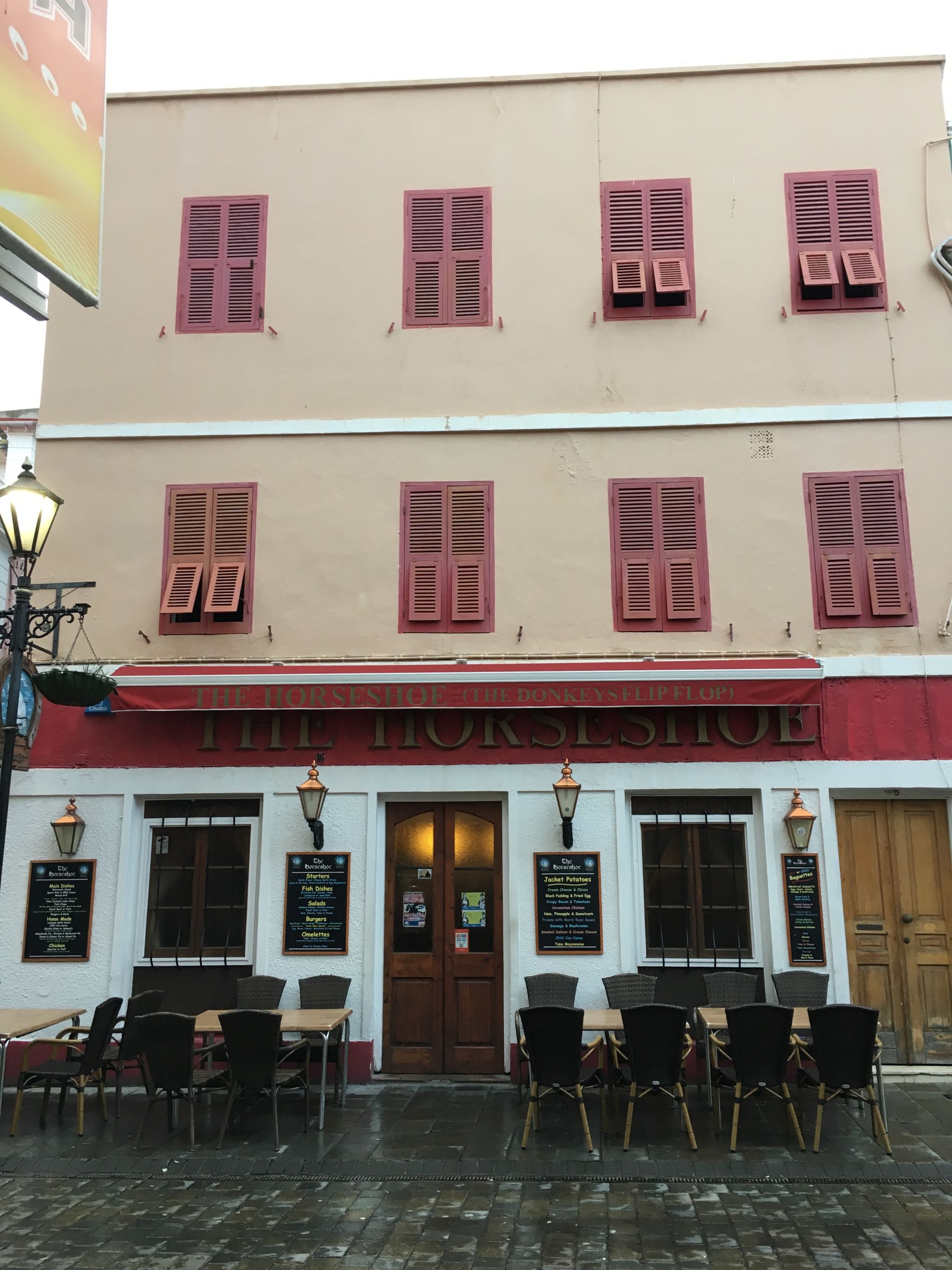 After the Battle of Trafalgar, HMS Victory moored at Gibraltar and two soldiers who perished in the battle were buried here.  Lord Nelson wasn’t one of them.  His body was taken back to England preserved in a barrel of brandy. 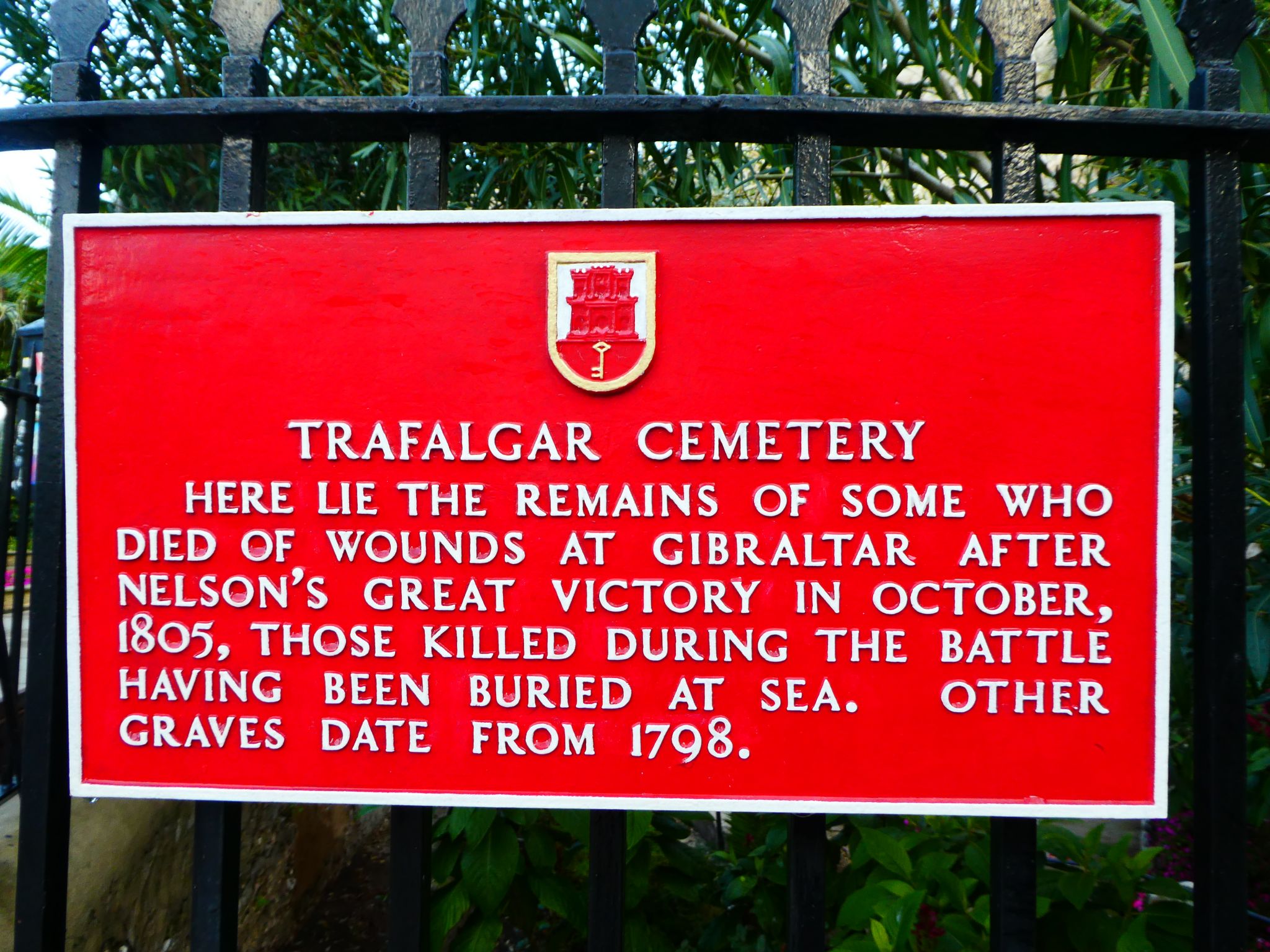 Along the ridge of the famous Rock are a series of old gun batteries, now decommissioned.  On a walk down from the top, we visited O’Hara’s Battery, also known as O’Hara’s Folly.   In the late 1700s the then Governor of Gibraltar, Charles O’Hara was convinced that if a watchtower was built on the highest point of the Rock, it would be possible to see the port of Cadiz, home to the fleet of enemy Spain.  He refused to accept advice that this was not so, and the tower was constructed.

Not only was Cadiz not able to be seen, but the tower was downright dangerous. As the highest point for miles, it was prone to lightning strikes.  It was slated for demolition but then the captain of HMS Wasp, departing Gibraltar in 1888 made a bet that he could hit the tower with an onboard cannon.  On the sixth attempt, he was successful and the tower was no more.  Such escapades would probably earn a court martial these days.  And as for O’Hara, he was known during his lifetime, and thereafter, as the Old Cock of the Rock. 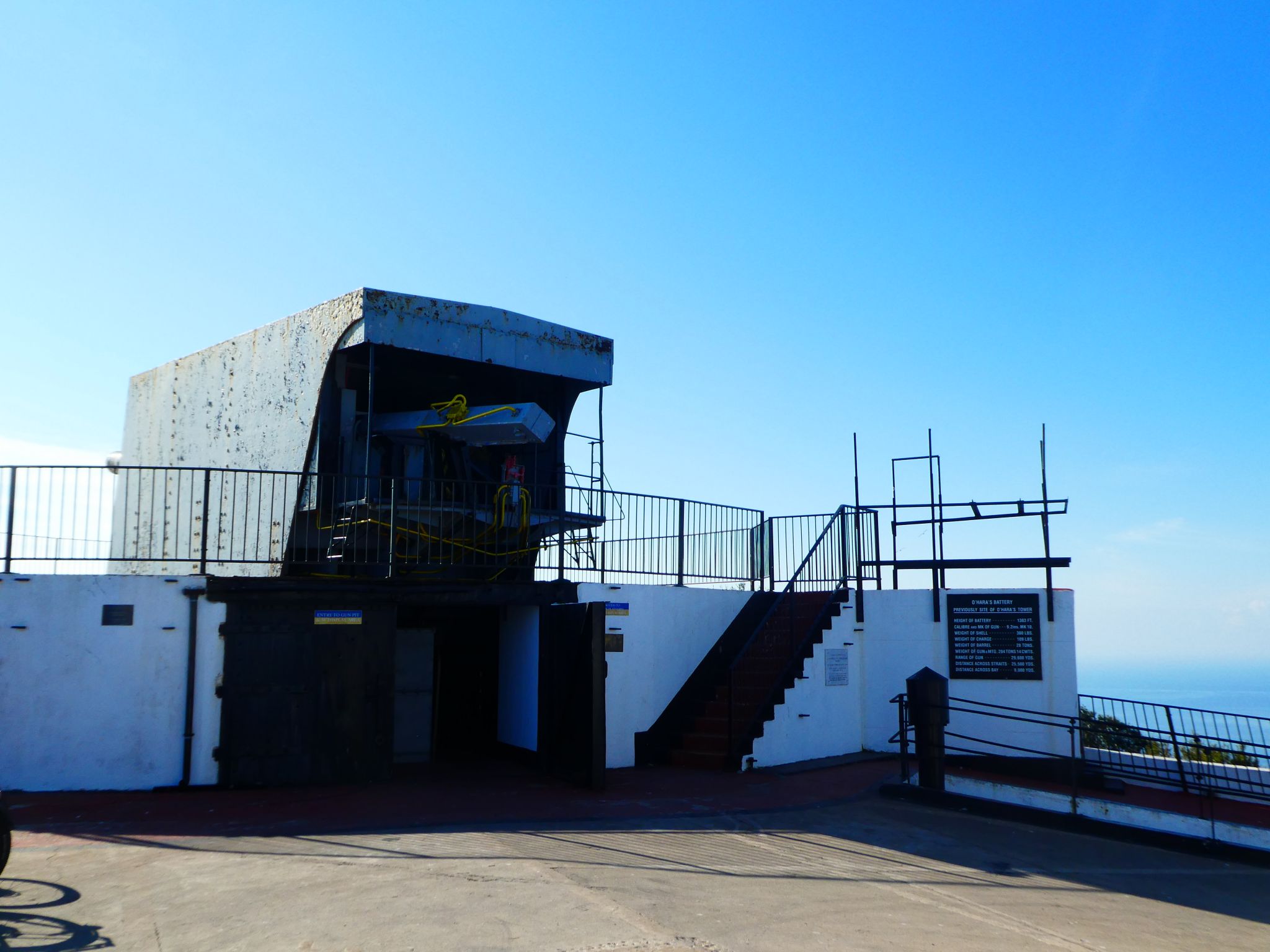 A little further down the hill is the incredible St Michael’s Cave.  The cave system descends from high on the rock down into a labyrinth so vast it has never been fully explored.  The Moors believed it to be the entrance to a subterranean passage running the 24km distance under the Straits of Gibraltar and emerging in north Africa. They believed this to be how the famous Barbary Macaques came to be here.  Well, there’s no monkeys anywhere else in Europe, and the only other place these macaques are found is north Africa, so who knows…

Anyway, the cave system is well worth a visit, albeit now lit with psychedelic lighting. 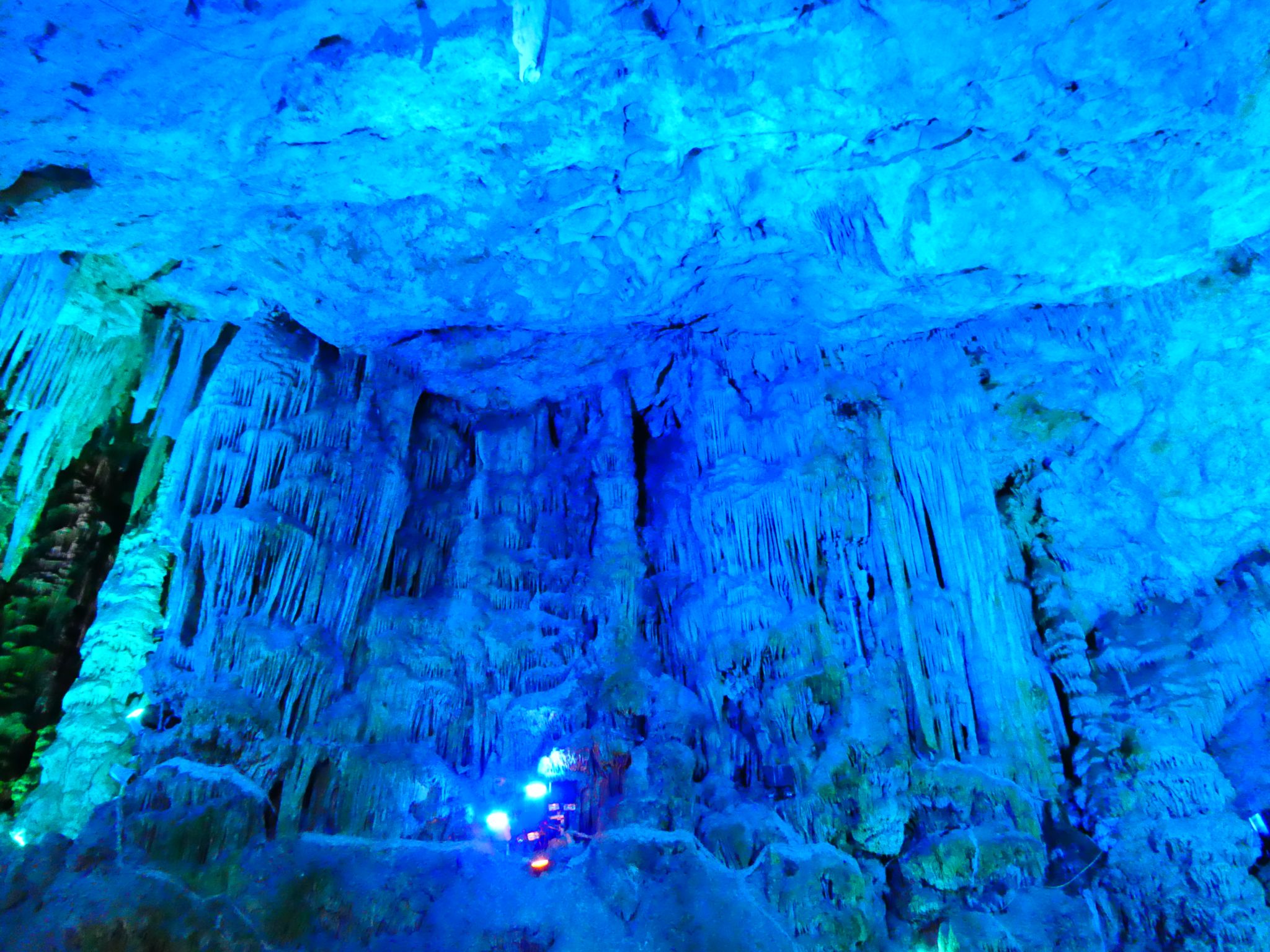 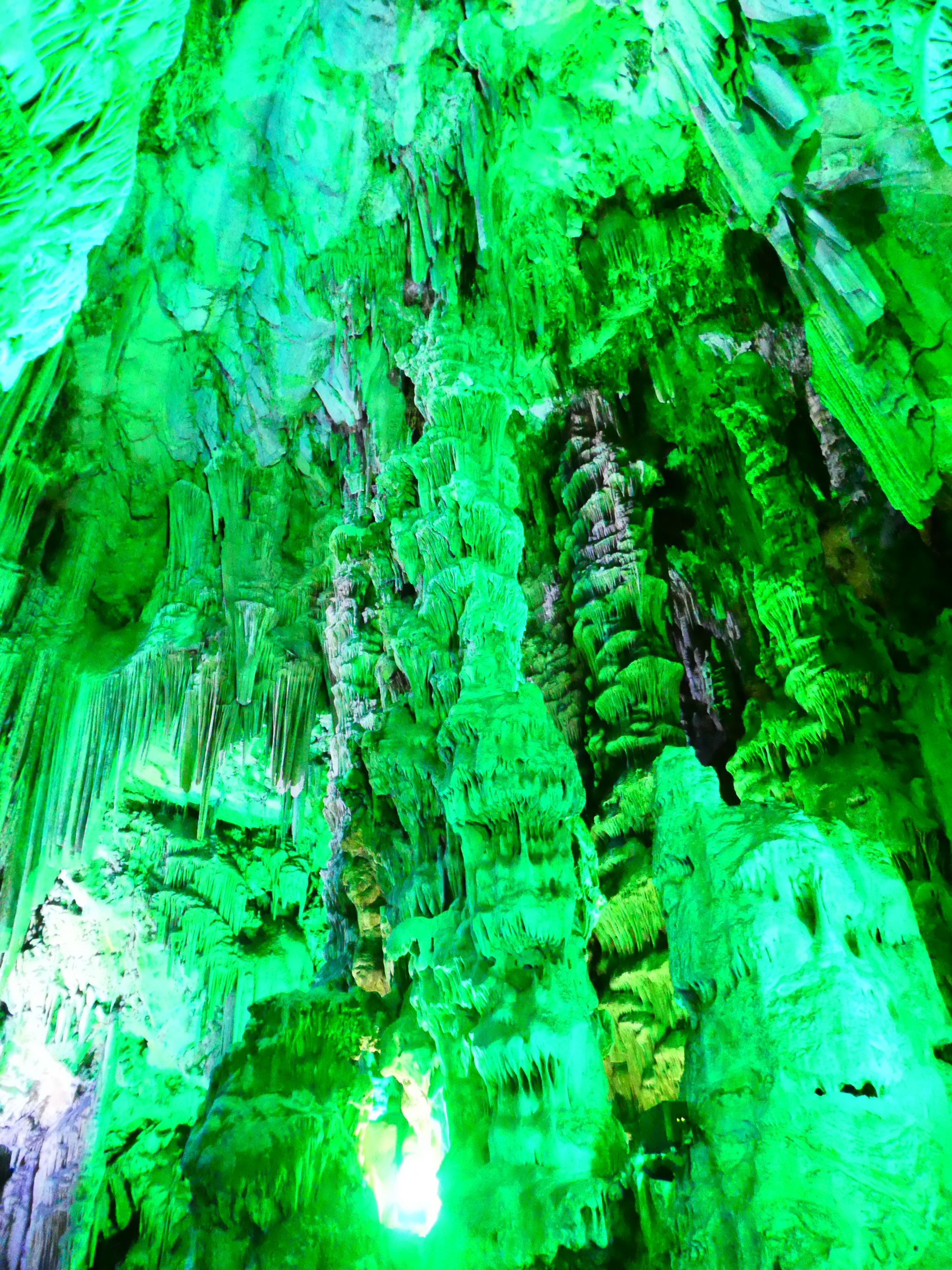 There are also the siege tunnels to be visited.  Chiselled out of solid limestone during the Great Siege of Gibraltar in the late 1700s.  The siege lasted almost four years, during which the Spanish and British forces faced off across the one kilometre isthmus separating the British territory from Spain.   One section of the Rock was so steep and exposed, the British could not erect gun positions on it.  Using hand tools and gunpowder blasting, the British cut a 270 metre tunnel around the section, punching through to the outside at strategic points in order to position cannons at intervals along what would otherwise have been a blind spot in its line. 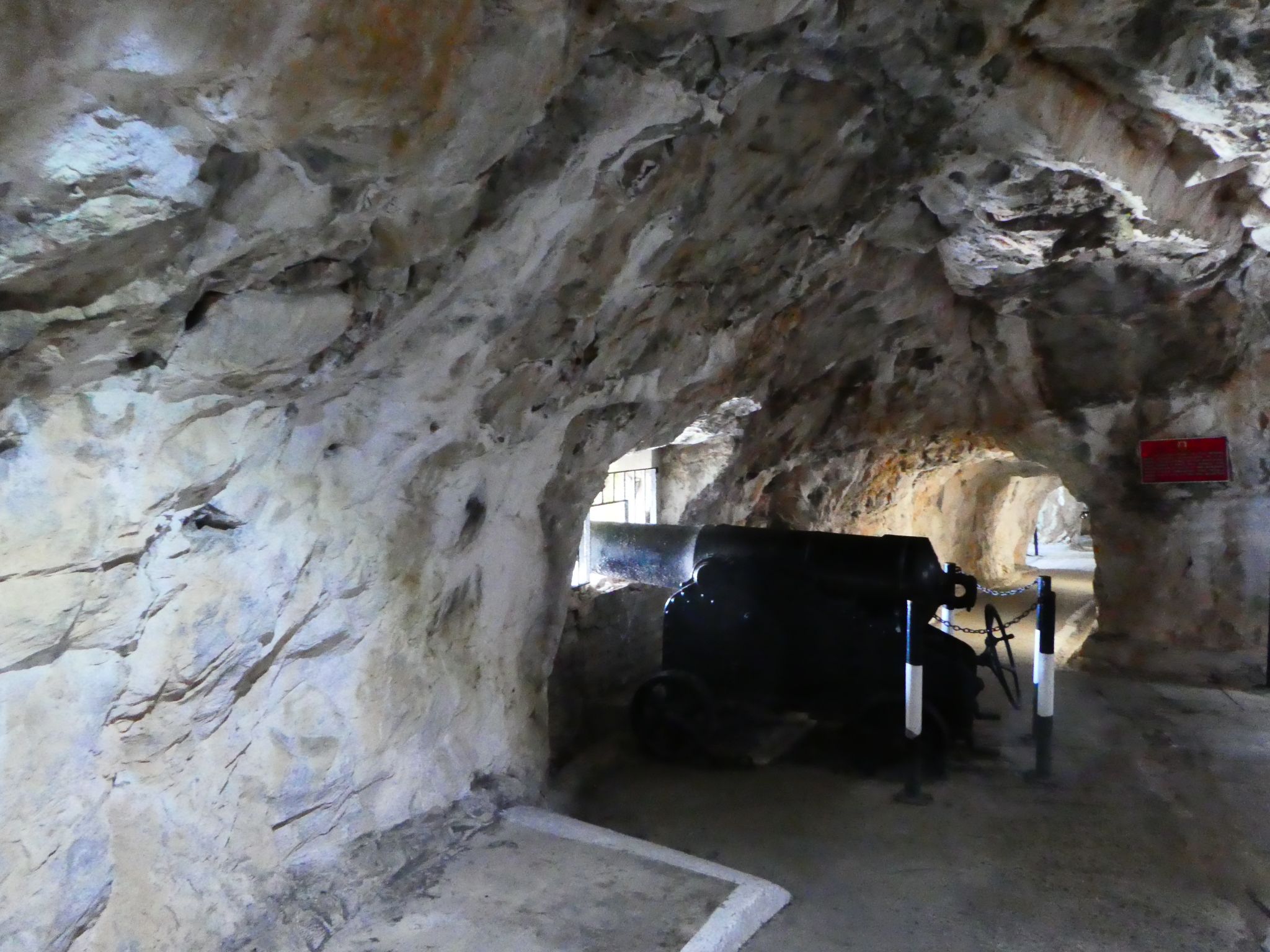 All that history is interesting, but really, visiting Gibraltar is about the monkeys.  Well, for one of us, at least.

Most of the upper area of the Rock is a nature reserve and is home to about 230 Barbary macaques.   Although commonly called apes, they are not.  They are monkeys.

There is an old British saying that ‘when the Apes leave the Rock, so will the British’.  So strong is this superstition that when the number of monkeys on Gibraltar dropped to just seven in 1944, Winston Churchill ordered more be obtained urgently from Morocco and the minimum to be 24 monkeys – a strange priority for a country still fighting a world war.

Happily, the population is thriving. 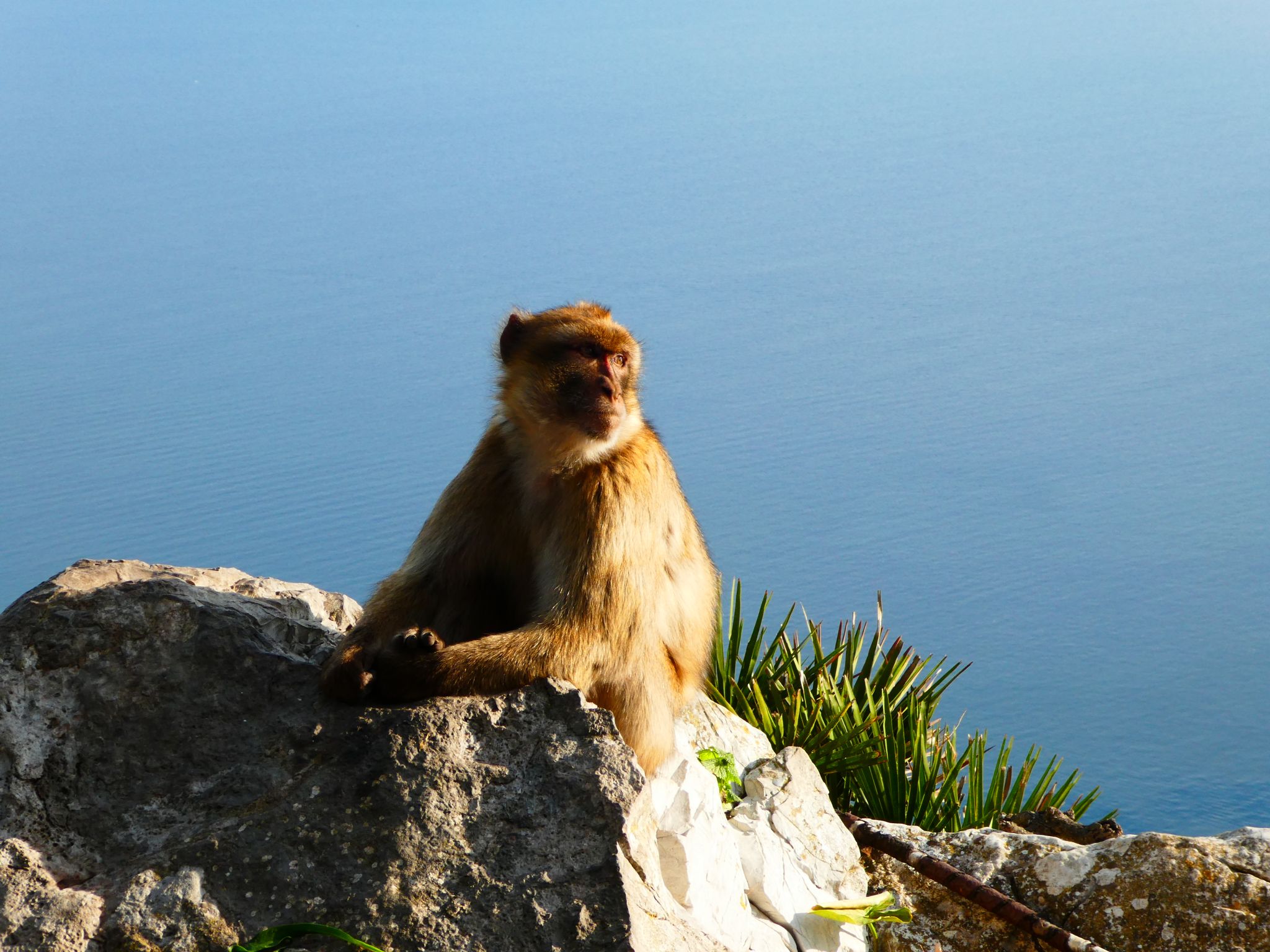 For the most part, the monkeys sit in the sun or play with each other without much regard to people.  As we walked the paths through the reserve, they were everywhere, just sitting on the paths or picking each other’s fleas. 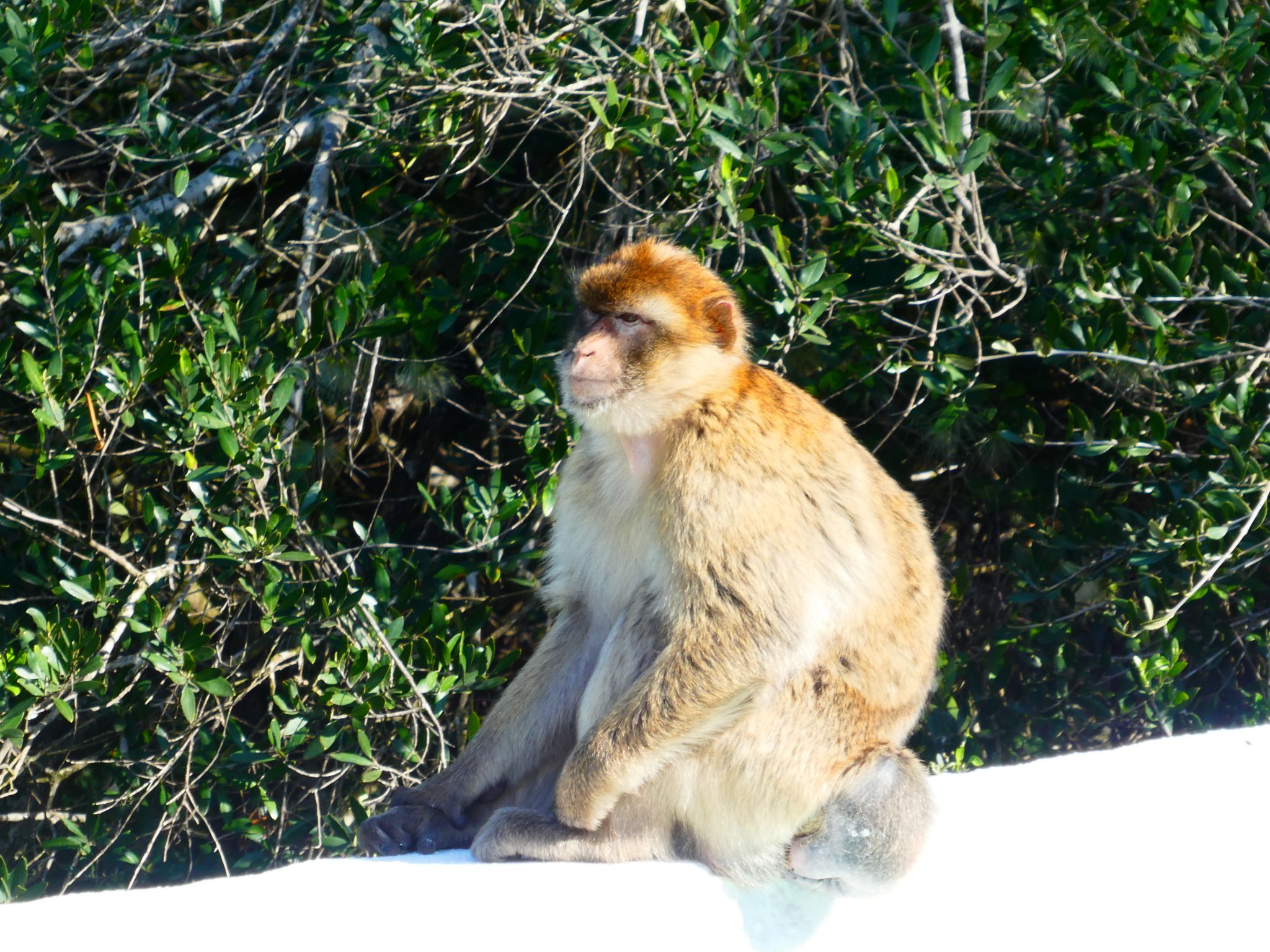 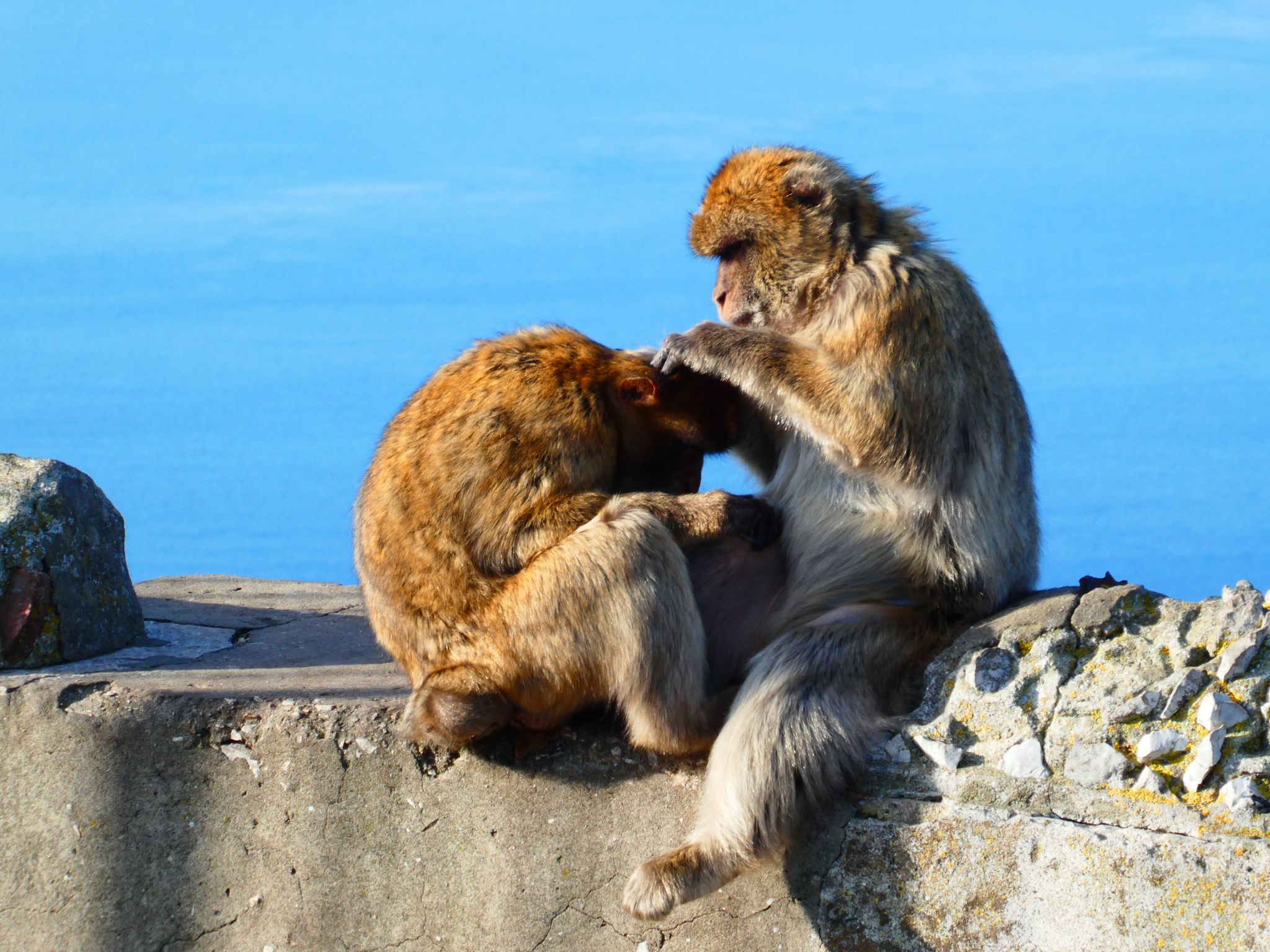 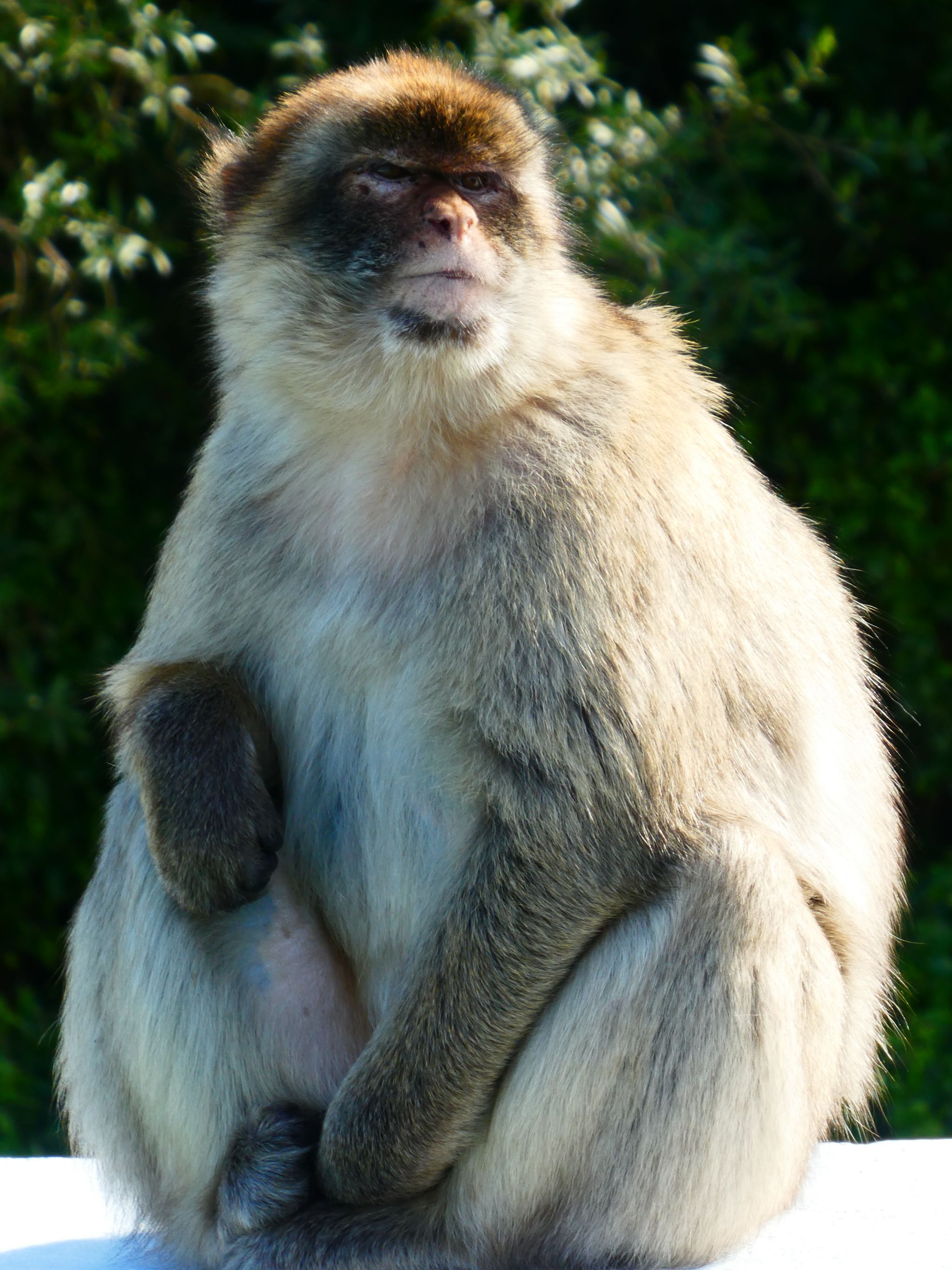 They were even happy to snooze in the sun despite the presence of people. 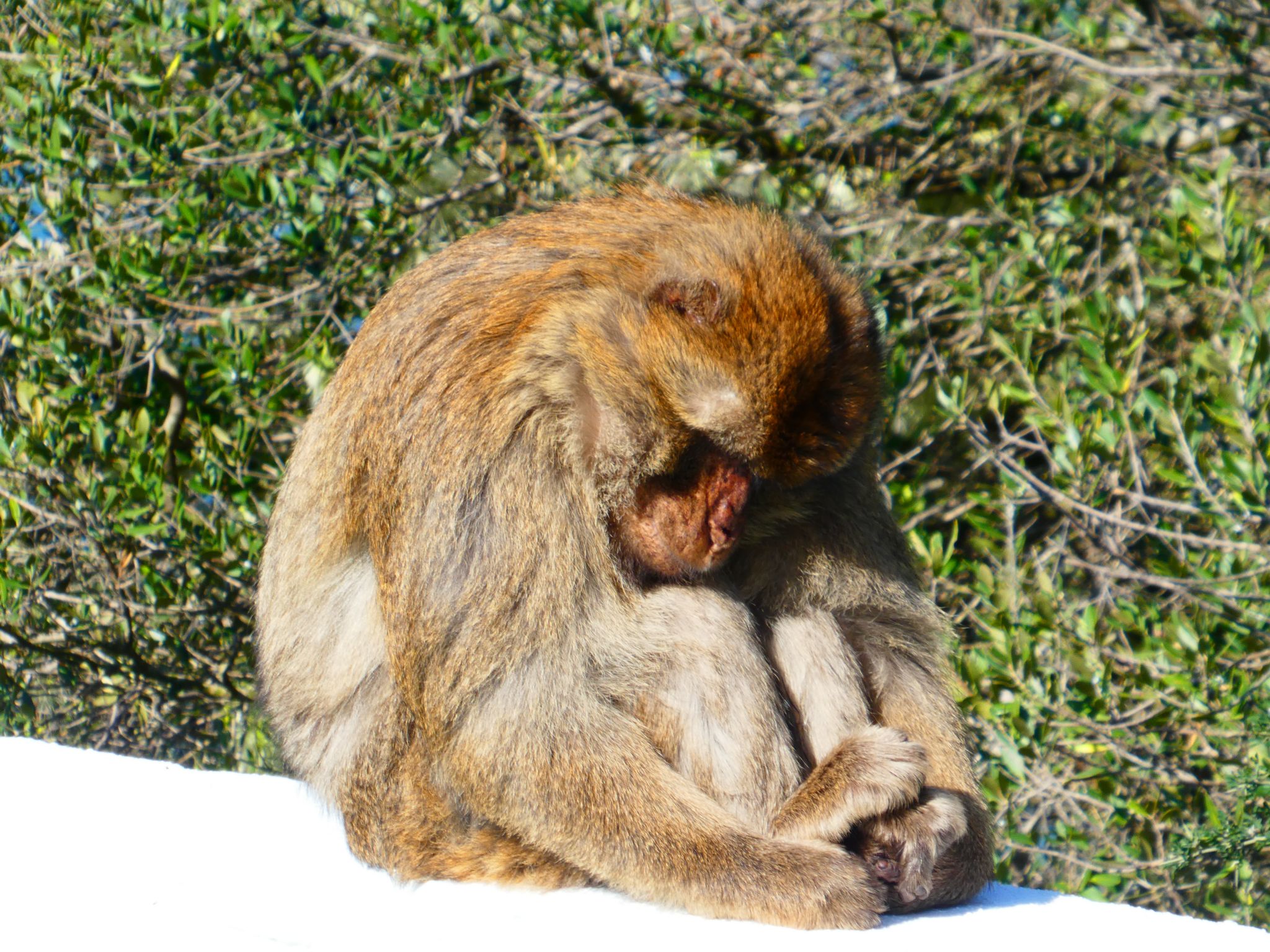 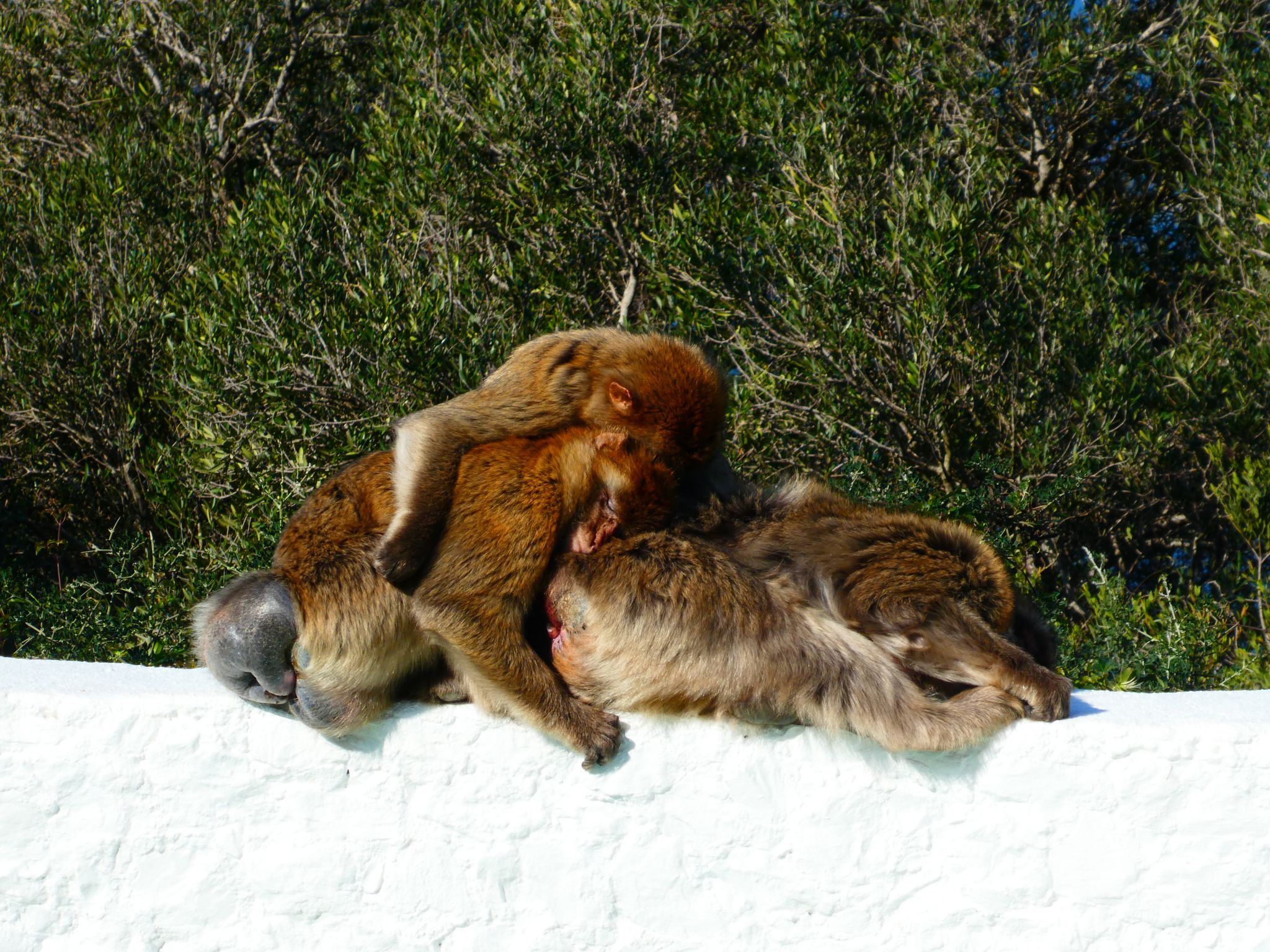 In truth, they are a little too habituated to people and bad behaviour can occur.  The attendants have to keep the doors to historic sights closed or the monkeys will run amok inside. 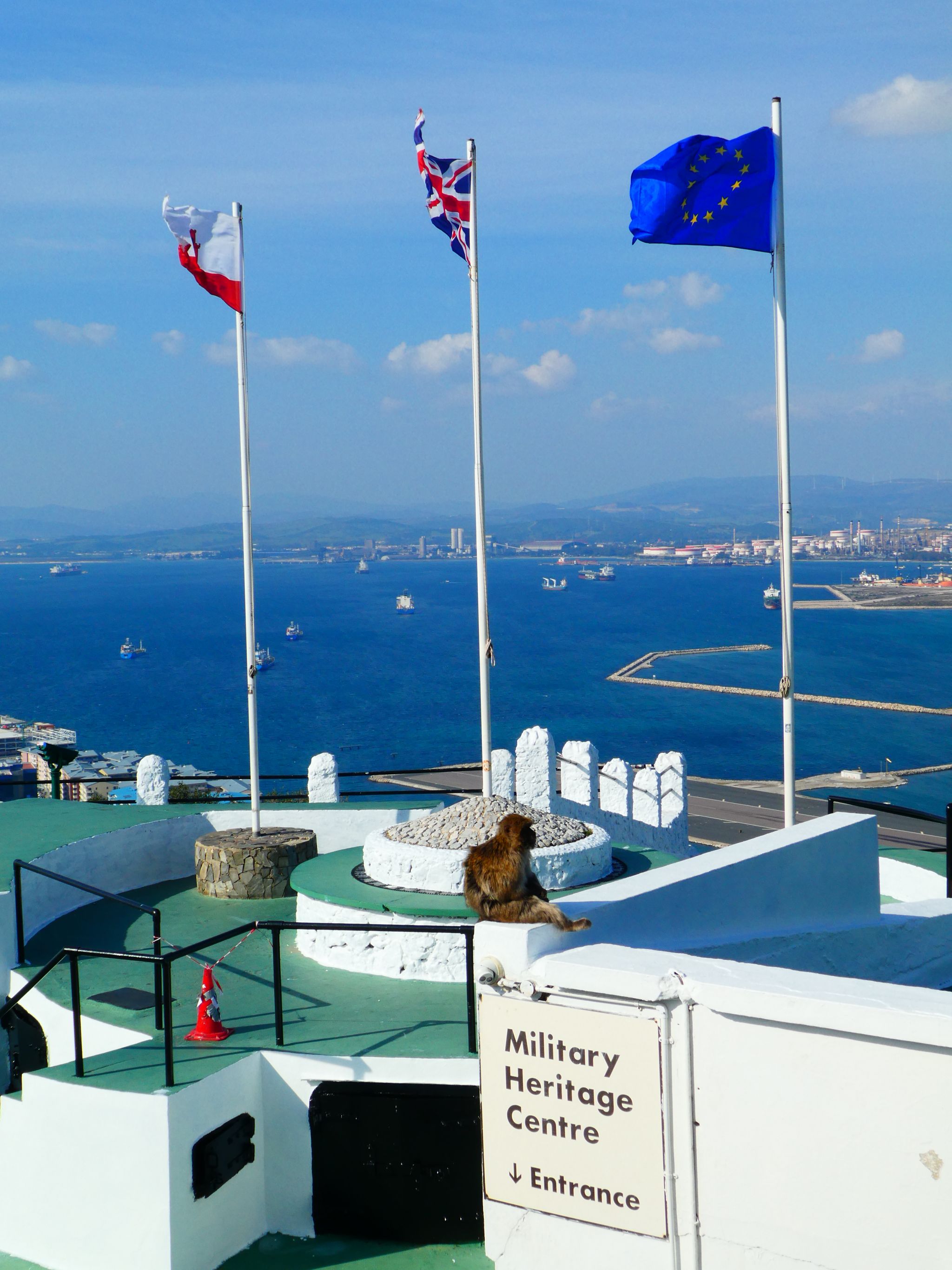 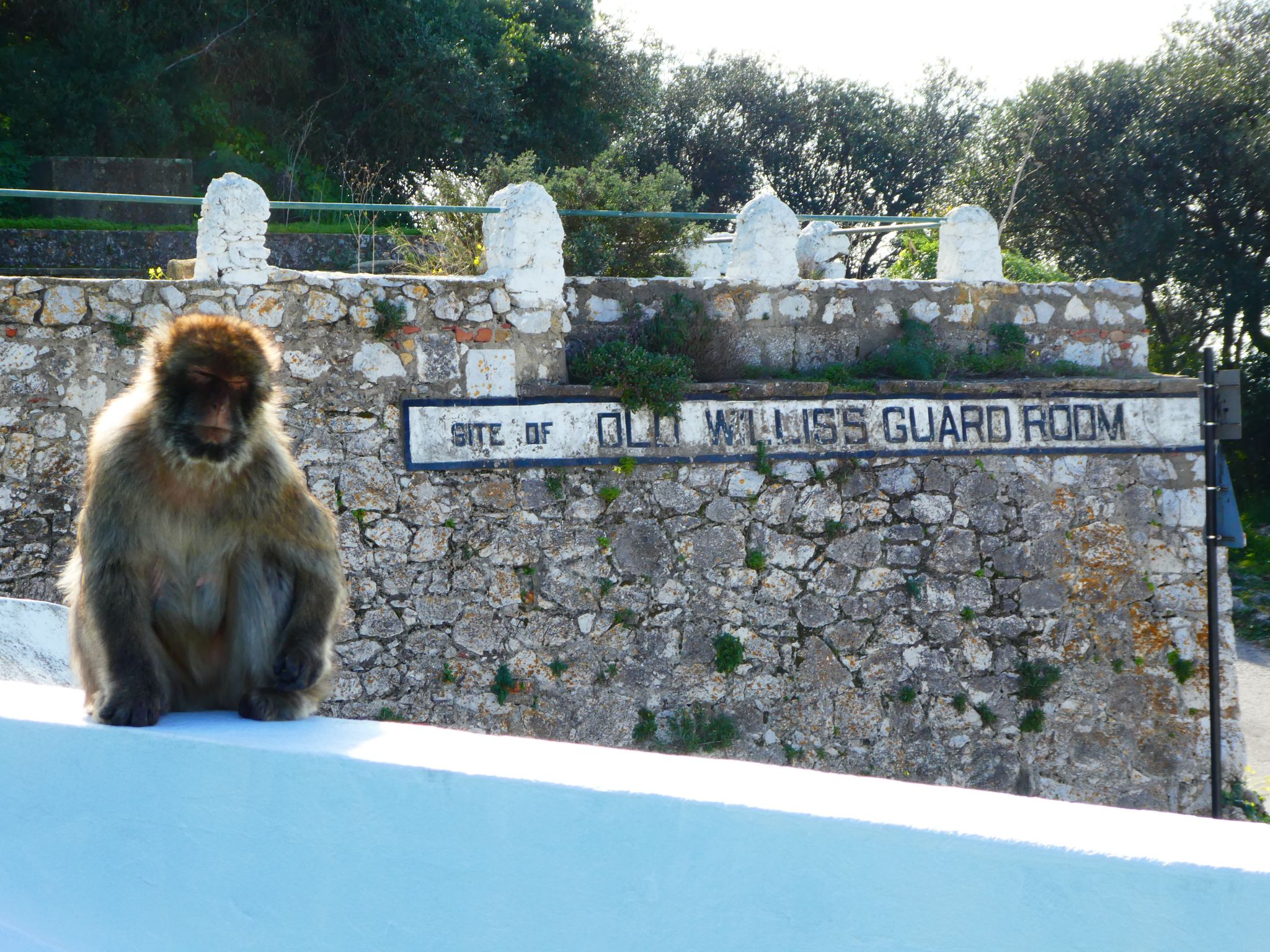 Their bad behaviour can also be personal.  Not long after reaching the top of the Rock we witnessed a co-ordinated assault.  The first monkey jumped on the back of a tourist.  The tourist did the sensible thing – leaned forward and let the monkey move on.  But, having confirmed the man would react passively, the second one leaped on his back, removed his sunglasses and scampered off with them in his mouth.  Here it is in real time: 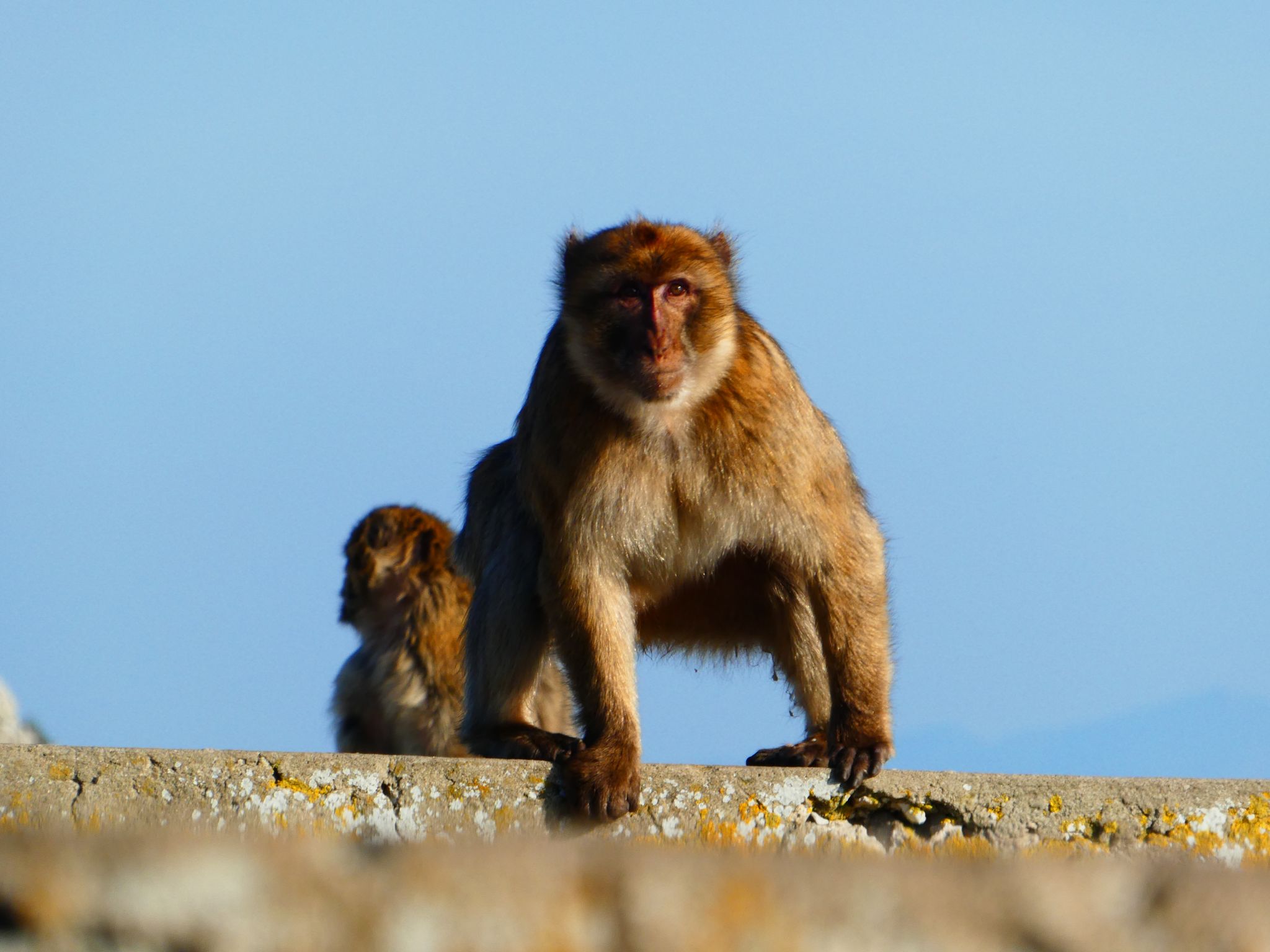 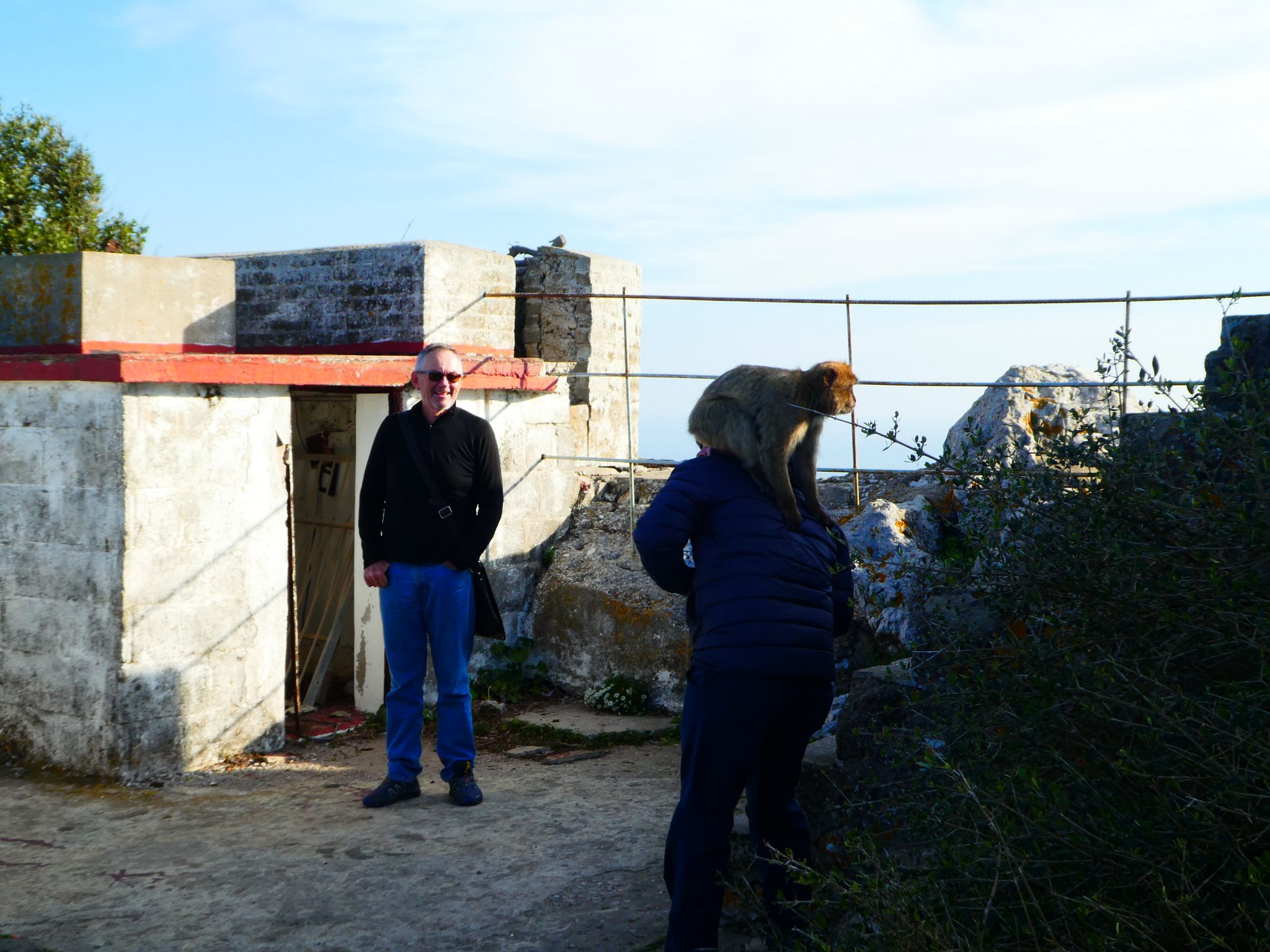 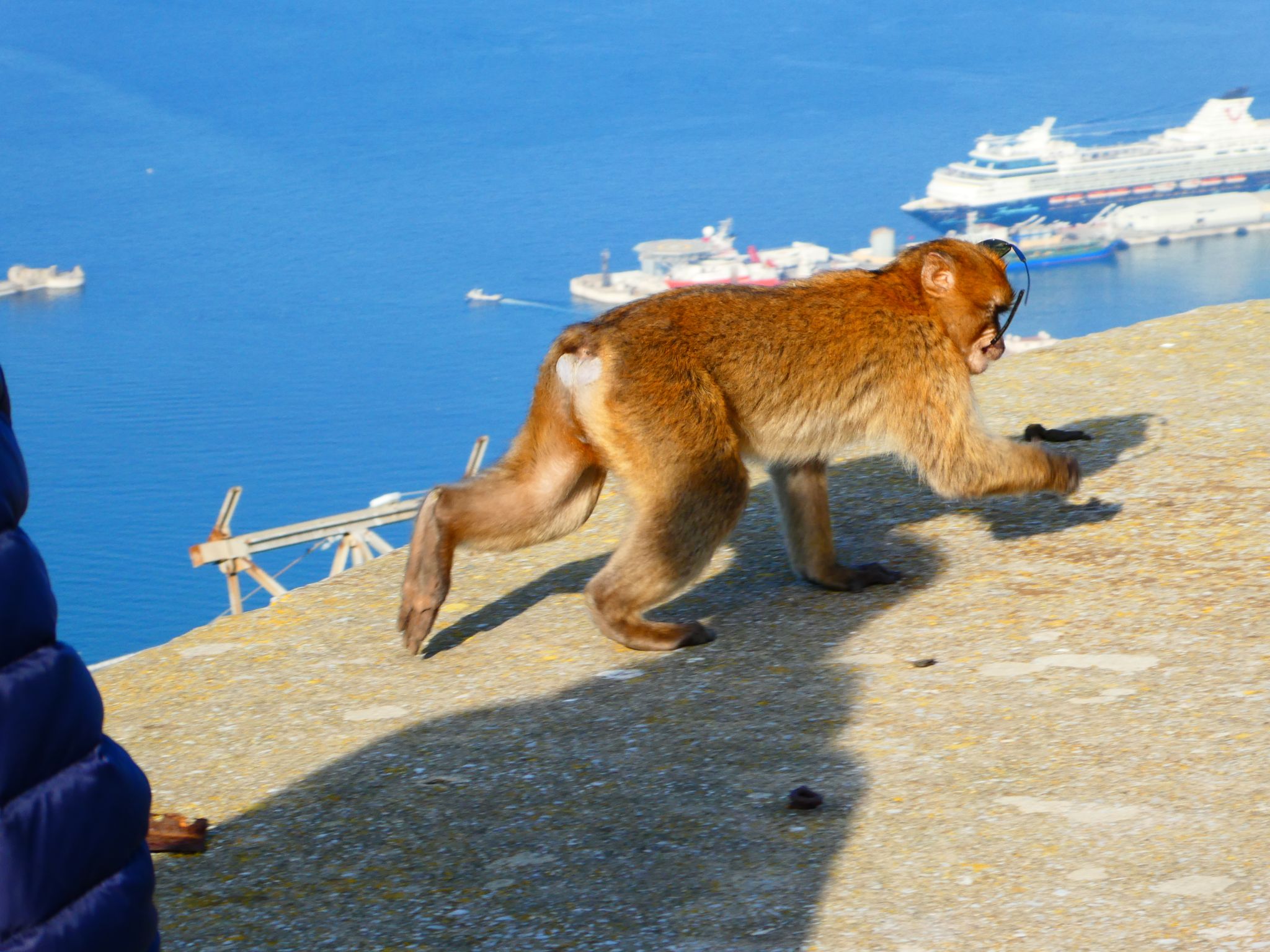 They are devious creatures.

The monkeys are fed by rangers, high on the Rock in a deliberate move to ensure they have no reason to come down to where people are living.  That seems to work.  We didn’t see any close to town.

Throughout the park there are signs telling people not to feed the monkeys, not to eat in the park as the monkeys will try to snatch the food, and not to carry plastic bags, which the monkeys associate with food.  Despite this, we saw a foolish woman get out of a car with a half eaten apple and wonder why they rushed at her.  And we saw an irresponsible taxi driver giving nuts to his passengers to feed the monkeys, which is not only stupid but illegal.

Given her monkey bite in India (recounted in our post on Shimla), Julie was quite wary of these guys.  It was great to see them, but after witnessing their sunglasses heist, a bit anxiety-inducing.  Is she cured of her monkey obsession?  Only time will tell.