This wasn’t a ‘hike’ so much as a ramble around a gourmet’s paradise.

It started in the lovely little town of Aracena, just over an hour’s drive from Seville up into the Aracena sierras.  A 13th century castle dominates the ridge line above the town, and an enormous church from the same era towers over everything within it. 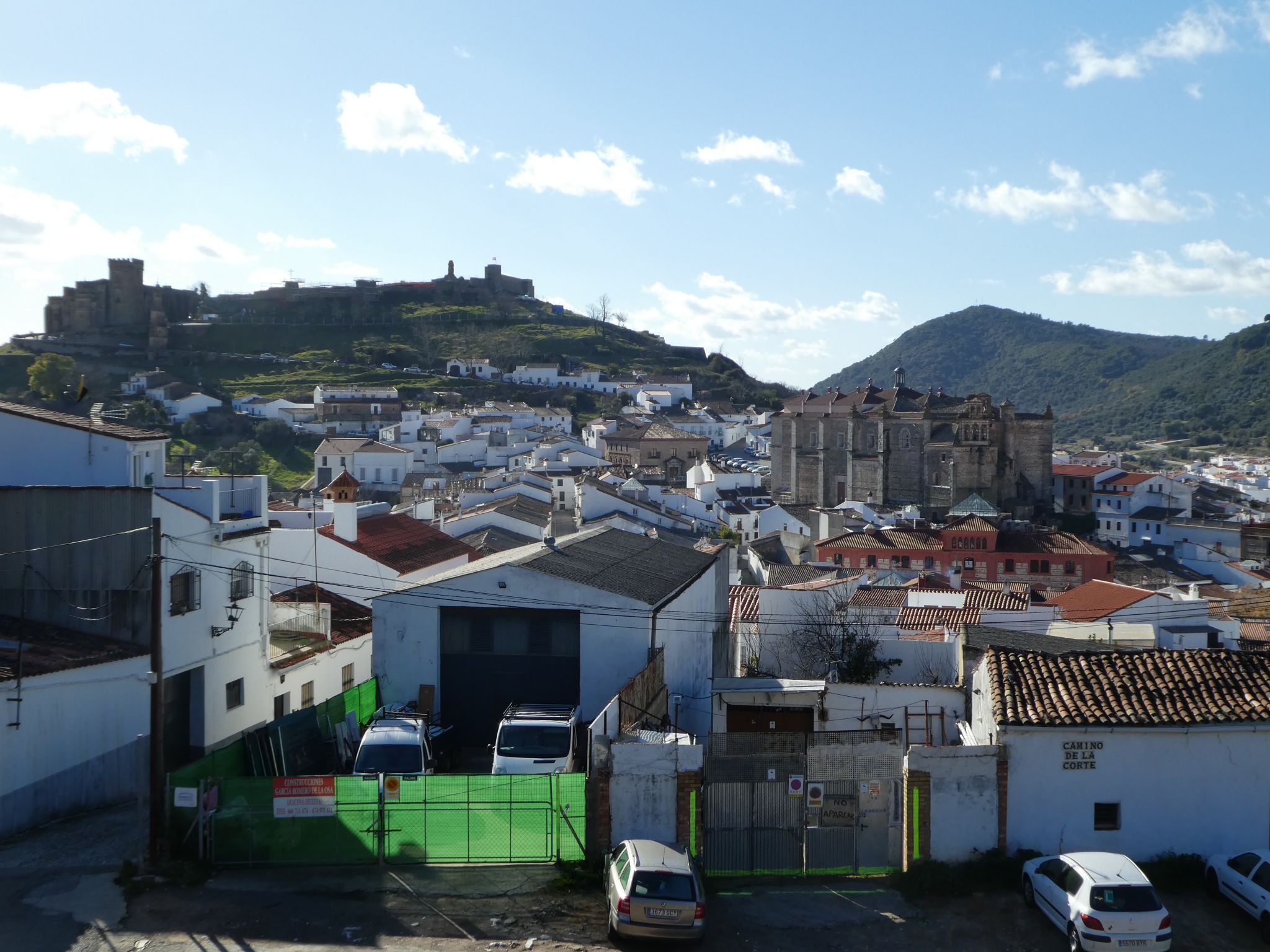 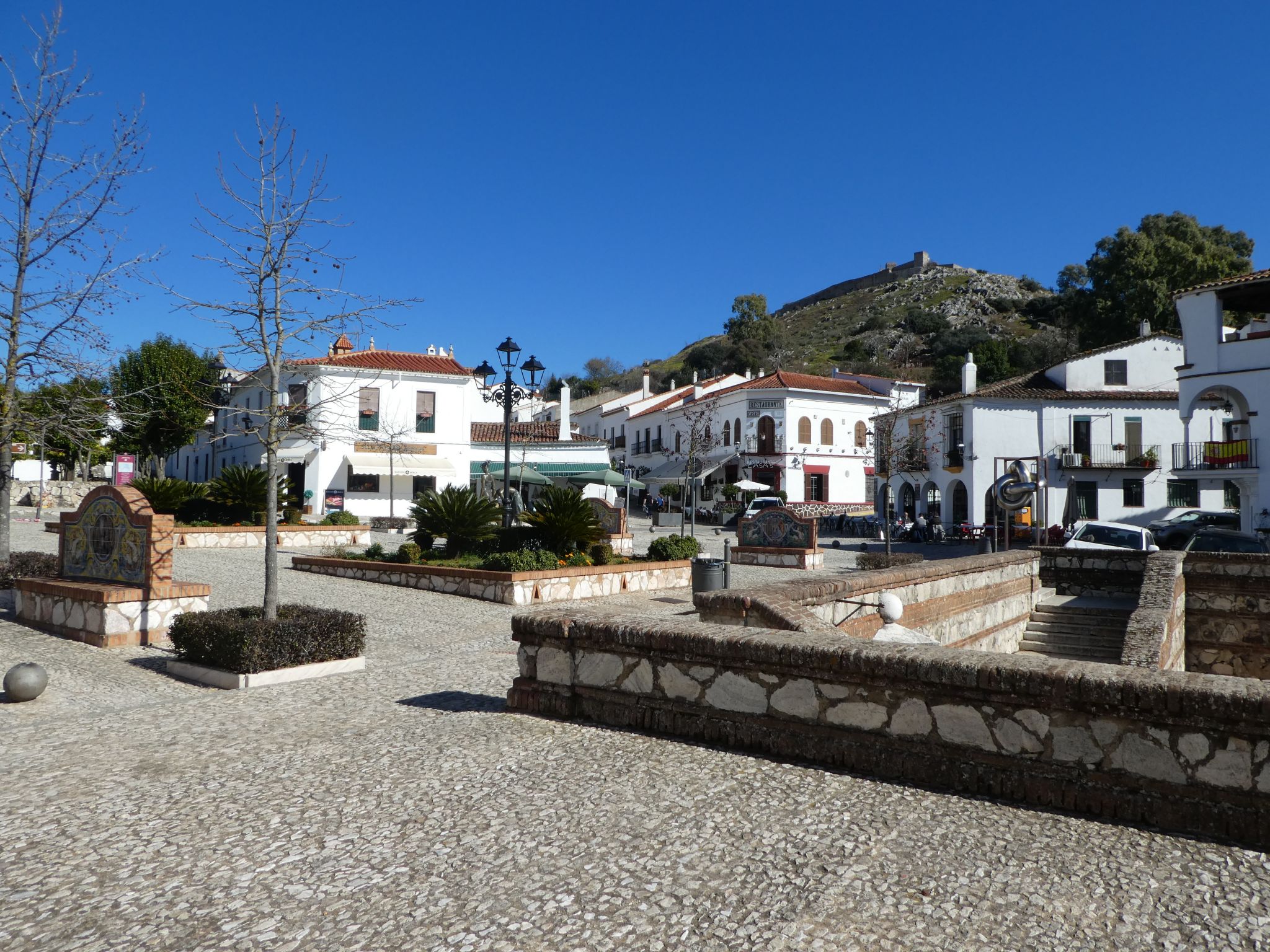 With 7,000 residents, Aracena is the largest town in the Aracena Natural Park.  A natural park is ‘a natural space protected for its biology, geology or landscape, with ecological, aesthetic, educational or scientific value, whose preservation merits preferential attention on the part of public administration’.   This doesn’t mean banning human activity,  In fact, unlike in a national park, there is farming and there are villages, but activities and development are regulated by reference to preservation priorities for the park.

As we were to discover over the course of the walk, the region is a foodie’s paradise.  There are more than 400 species of edible wild mushrooms.  High quality olive oil is produced here.  Artisan breads and locally produced conserves, cheeses, sausages and cured pork products feature in restaurants and shops in all the villages.

Aracena celebrates it’s most famous farm animal, the Iberian black pig, with a statue in the town centre. 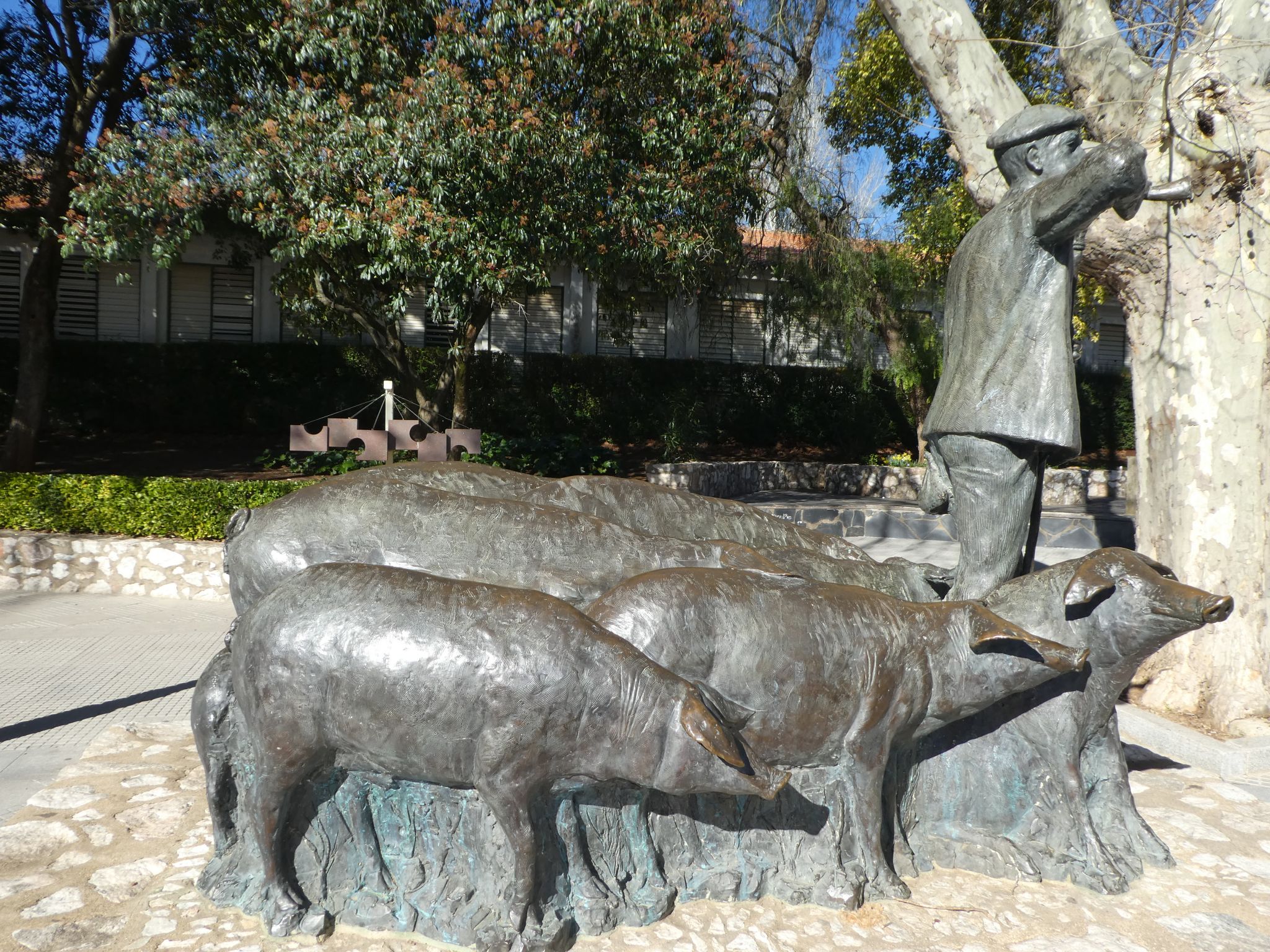 When we arrived, the walking company representative who gave us our trail notes took us to a cheese and produce shop in the square for a tasting of six cheeses all produced by the shop owner’s family at their nearby farm.

Our accommodation was a 16th century convent impeccably restored into a boutique hotel.  We were starting to realise this was not going to be an arduous walk.

Day 1 – Corteconcepcion loop walk: We set off from Aracena in brisk (read: near freezing) temperatures.  We were headed for Corteconcepcion, where we had arranged to do a tour of Jamonez Eirez, a local producer of Jamón Ibérico.

The temperature lifted a little, and we were soon walking through fields of acorn and oak where the famous black pigs roam around in spacious conditions. 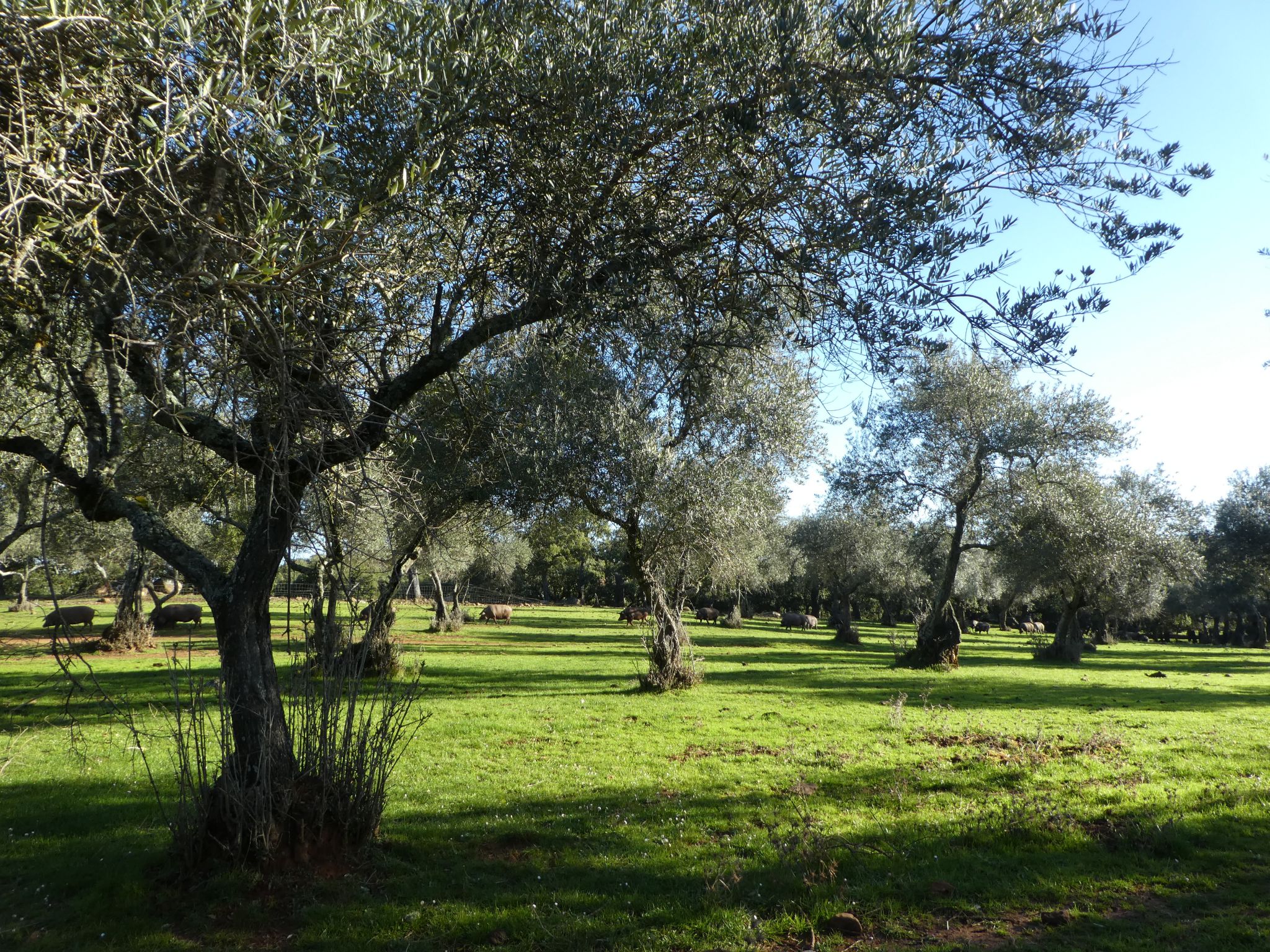 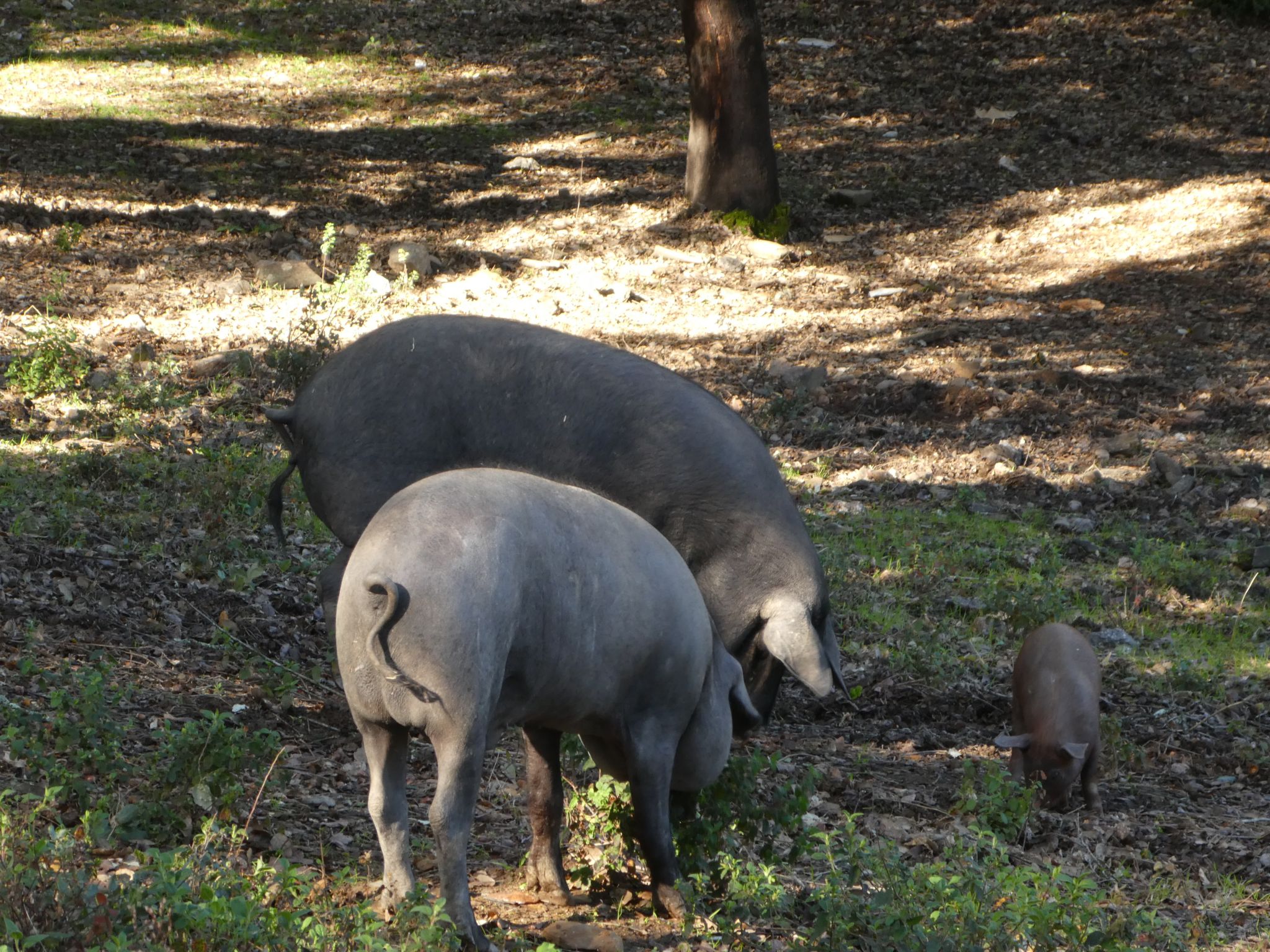 The Aracena Natural Park is one of only four areas in Spain permitted under the EU Denomination of Origin system whose farmers are allowed to call their cured ham ‘Jamón Ibérico’.

And as well as being raised in the specified zone, there are strict conditions on the pigs’ diet and grazing practices in order to attract the designation.  There must be no more than two pigs per hectare, which gives them great freedom to range through the natural oak forest feasting on a diet of grasses, herbs, acorns and chestnuts.

And for the most-prized jamon, Jamón Ibérico de Bellota, in their final months the pigs must have a diet solely of acorns, the pigs’ favourite food.   Acorns are rich in oliec acid – the flavour component in olives – which infuses the pig fat with such flavour that the pigs are sometimes referred to by locals as ‘olives on legs’.

If you have to be born a pig, being an Iberian pig destined for the Jamón Ibérico factory at least guarantees a good life first.

The tour included a walk around the farm to see how the pigs are raised.  The day before our visit some pigs had been sent for processing, leaving only four in the field.  They were nowhere to be seen.  We were told they had probably gone to a nearby lake foraging.  But we think they realised what had happened to their companions and decided to make a break for it.  We expected to see a headline in tomorrow’s newspaper reporting four pigs last seen down on the coast buying tickets for the ferry to Tangier after hearing they don’t eat pork in Morocco.

In accordance with EU requirements, the pigs are slaughtered elsewhere by a seperate operator, under strict conditions which limit stress to the animals.  The carcasses are returned here to the factory where they are processed and aged.  All parts of the animal are used, nothing wasted, in a range of artisanal cured pork products.  The focus for tours, of course, is a step through the process for curing and ageing the Jamón Ibérico.

Julie fulfilled a long held desire to stand in a forest of Ibérico hams and inhale that delectable aroma. 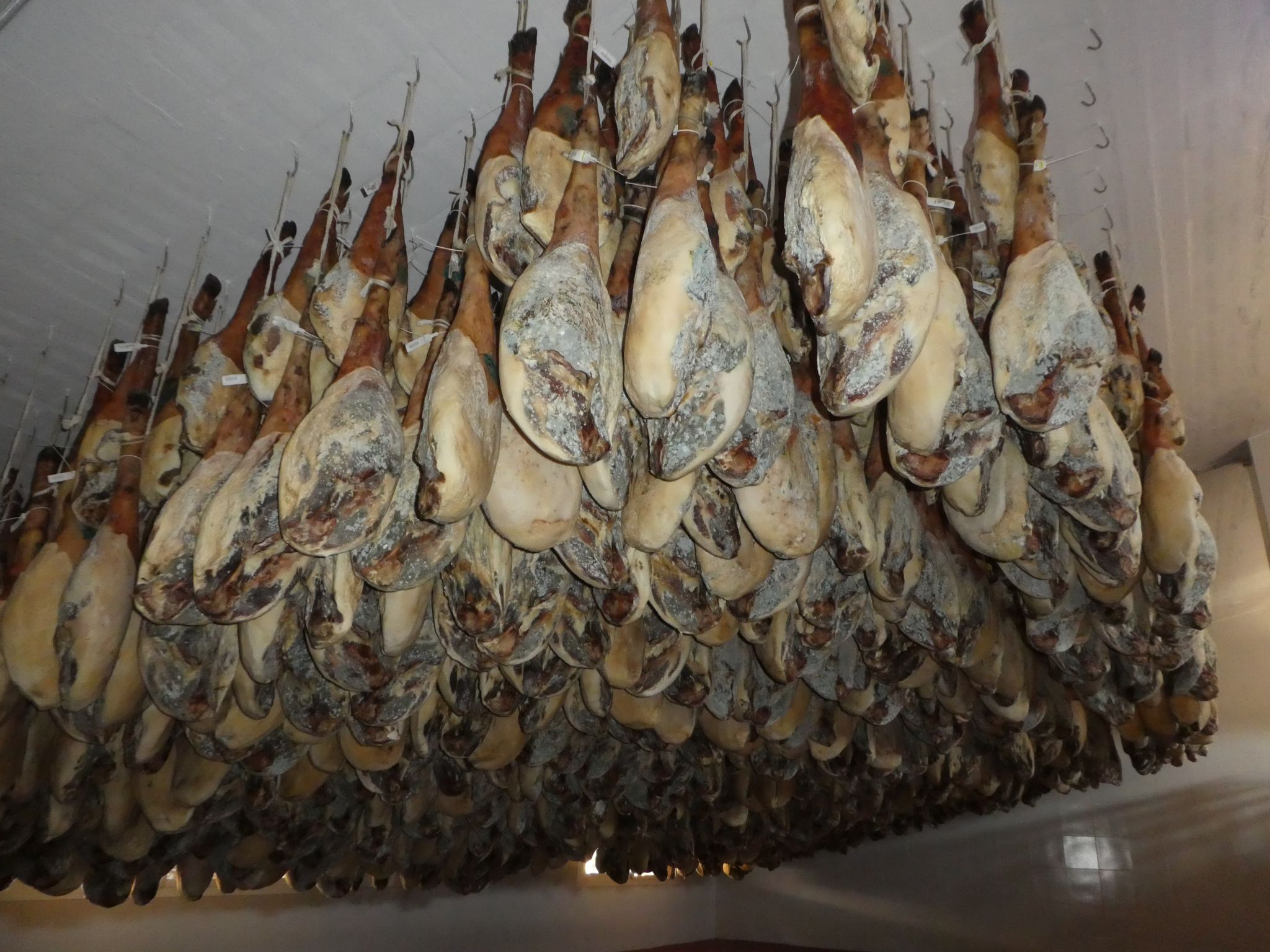 And then, best of all, a very generous tasting of two grades of jamon and a delicious cured pork loin, with matching wines. 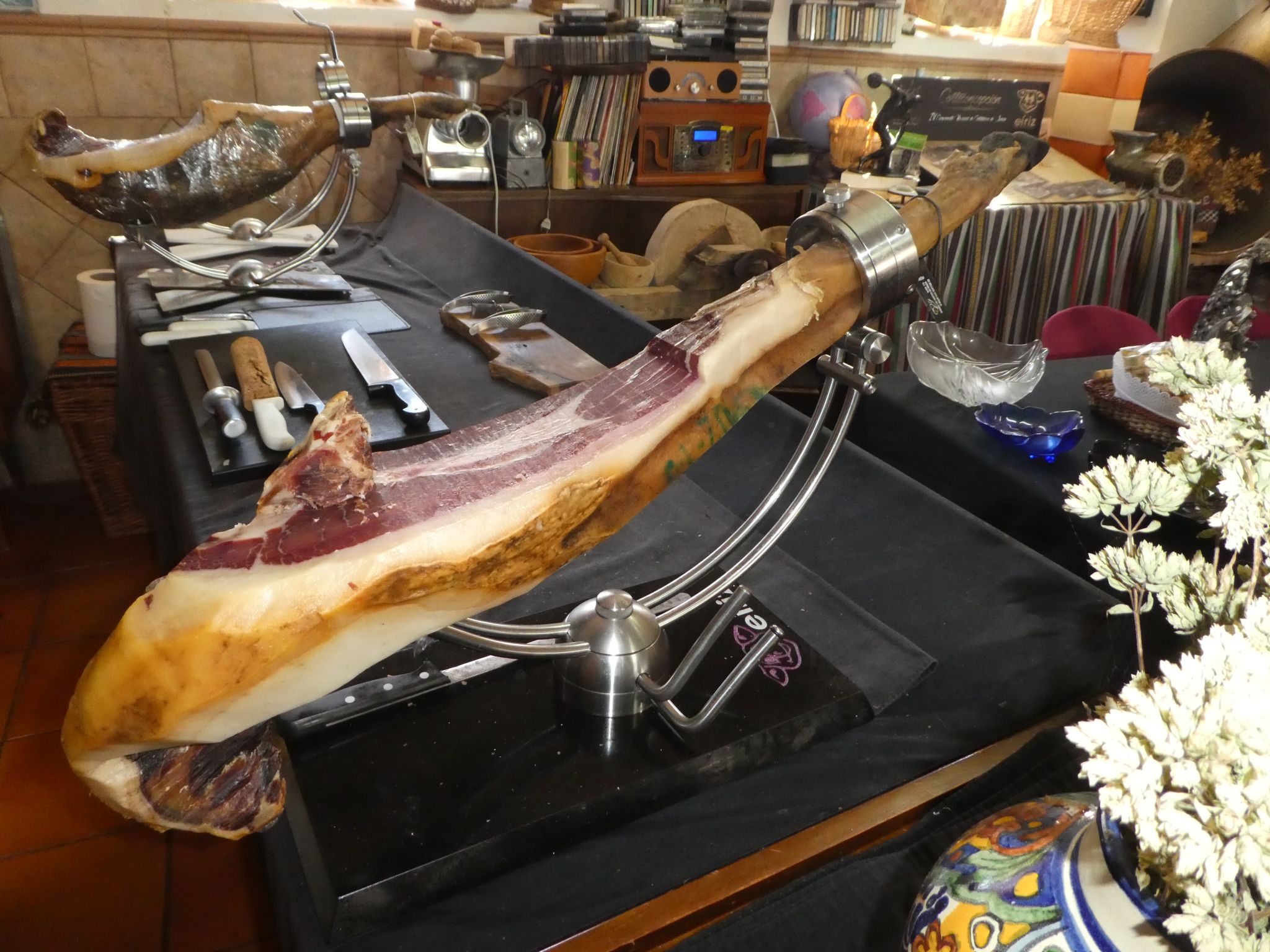 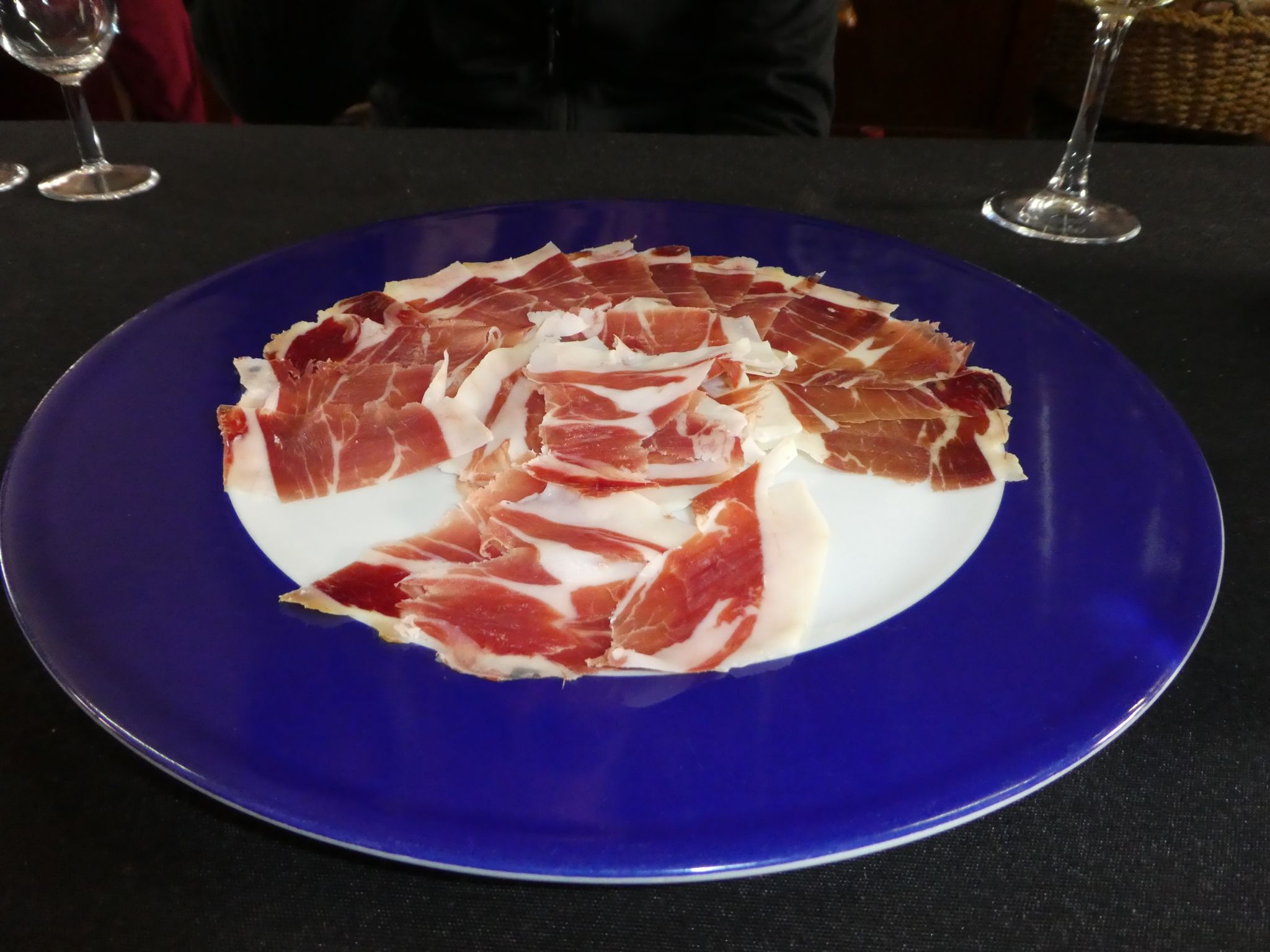 With tummies full of jamon and wine, we walked back to Aracena via a different path.  The trail was gentle, the temperature was pleasant, the countryside was delightful.  All was well in the world. 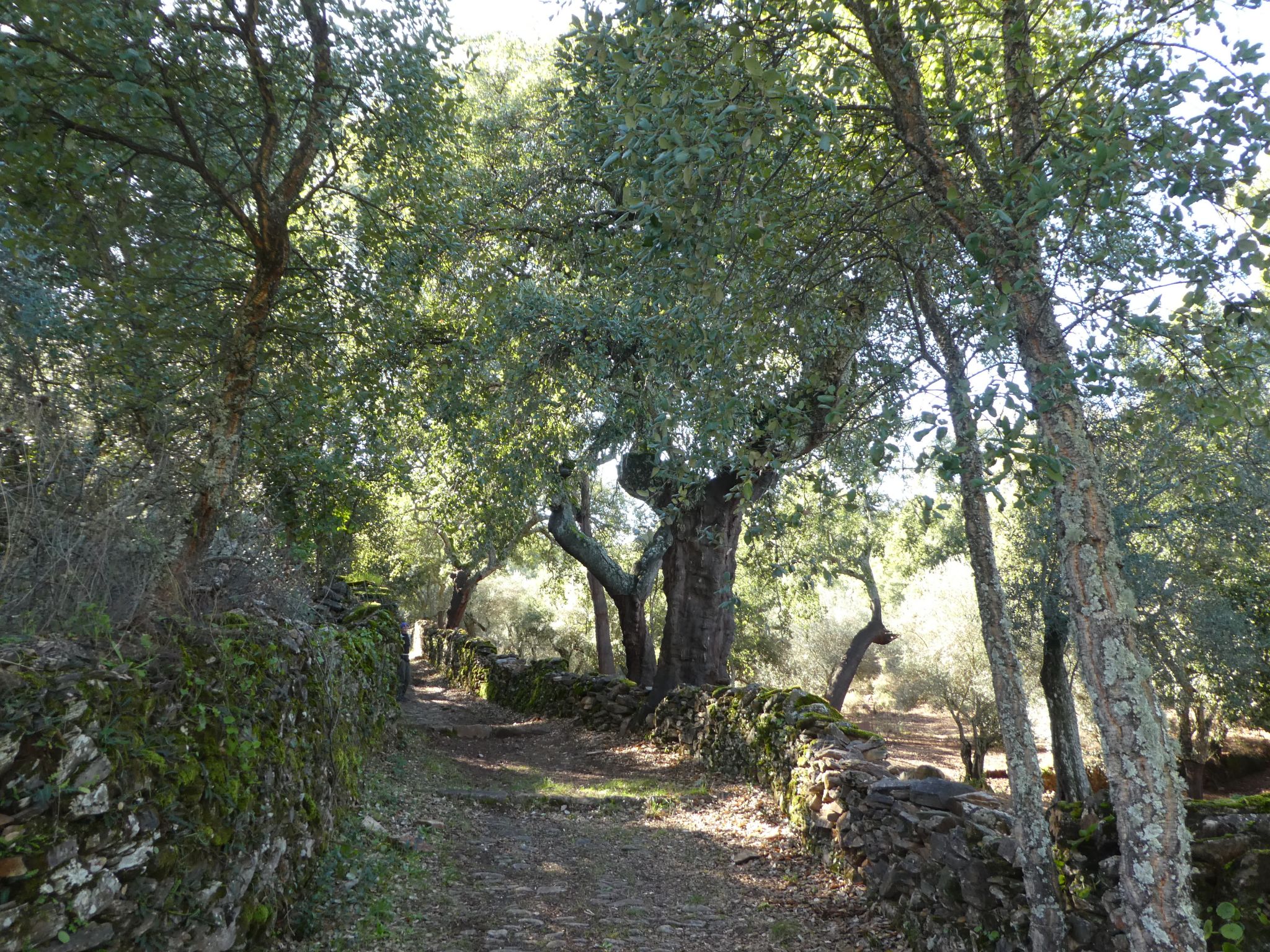 The pigs were friendly.  Likewise the cows and goats.  It was a bucolic idyl. 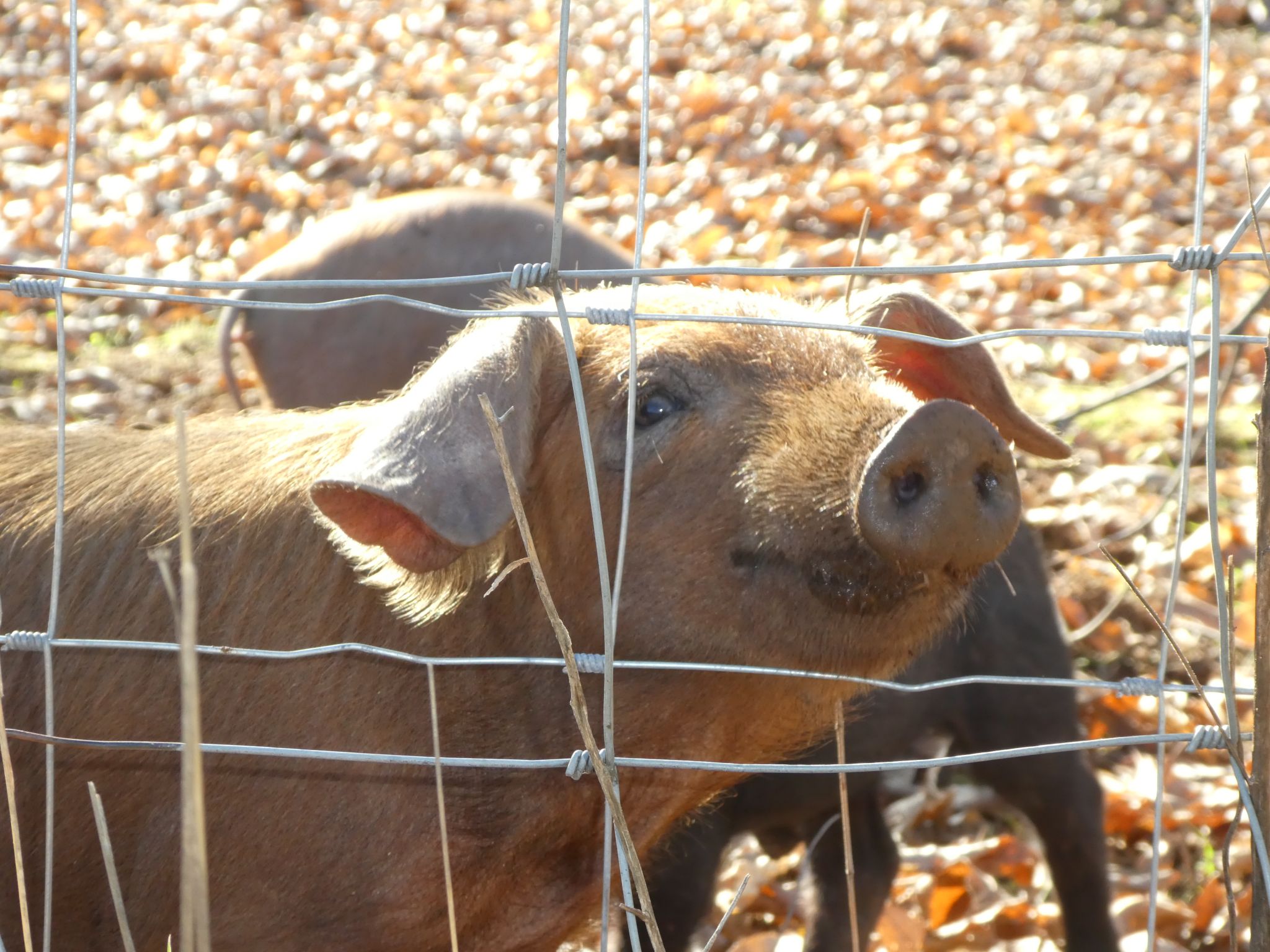 We walked for about two hours and had just crested a hill, on a public dirt road, when a man brandishing a large hunting rifle leapt from the forest and starting shouting excitedly at us in Spanish.  We didn’t need a Spanish dictionary to work out what he was saying.  We were in the middle of a boar hunt.  Yes, it seems that hunters will shoot across public roads – technically illegal – and there’s no requirement to post warning signs or close the roads.

Another shooter then emerged, who spoke good English.  She helpfully advised that we could keep walking ‘at our own risk’ but she strongly recommended against it.  ‘Go back’ she said, which seemed good advice.

Of course, that didn’t deal with the thorny issue that we were in the middle of it, so even going back was not without risk for some distance.  We backtracked a few kilometres.  We could hear the shots firing and hoped not to see an enraged wild boar charging toward us.

We were loathe to walk all the way back to Aracena, so we deviated to the nearest town, Los Marinos.  It was pleasant enough, with a public square where non gun-lovin’ locals were enjoying a Sunday beer in the sun, and a whitewashed church with the mandatory good-luck stork nest on the bell tower. 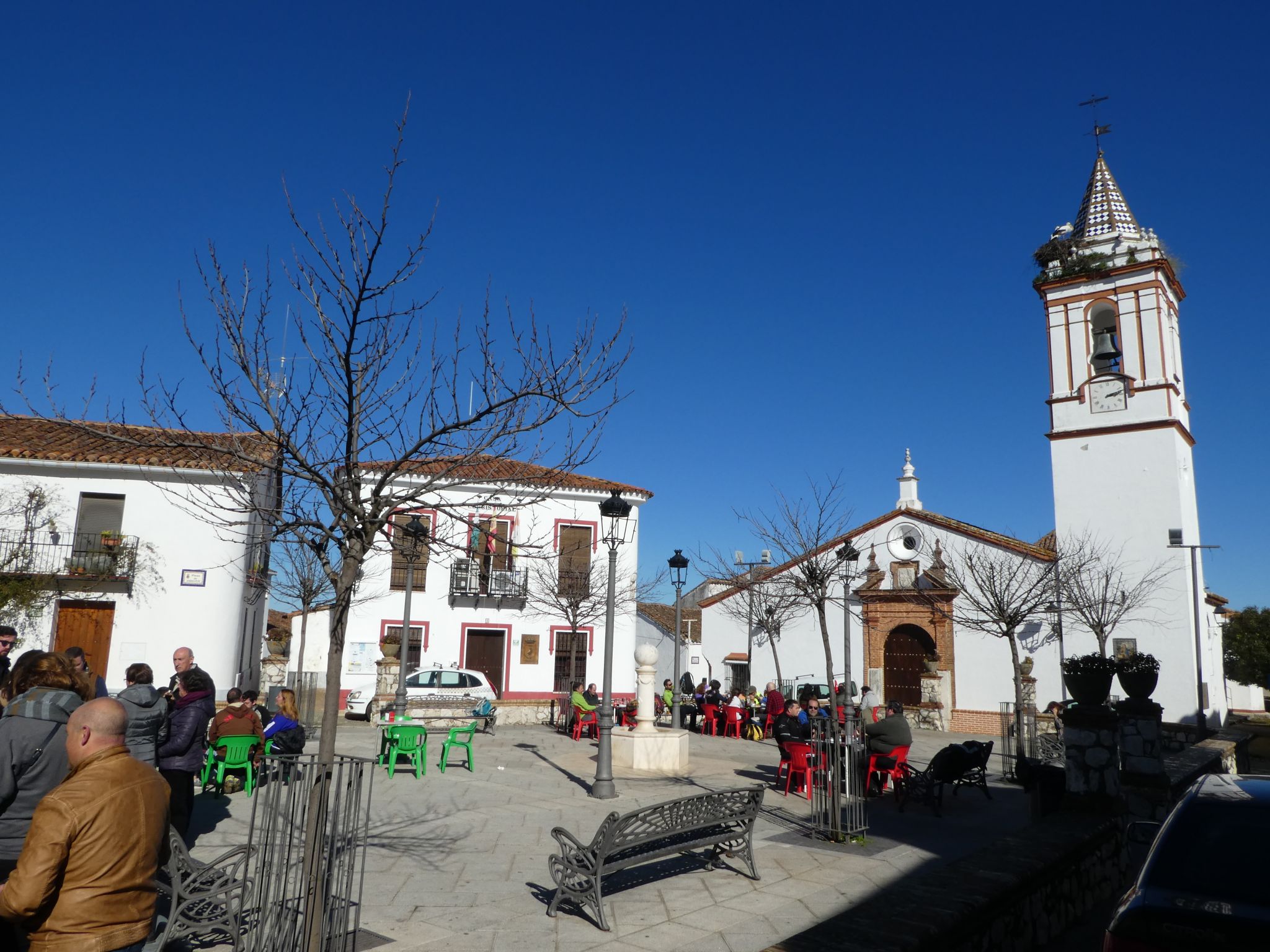 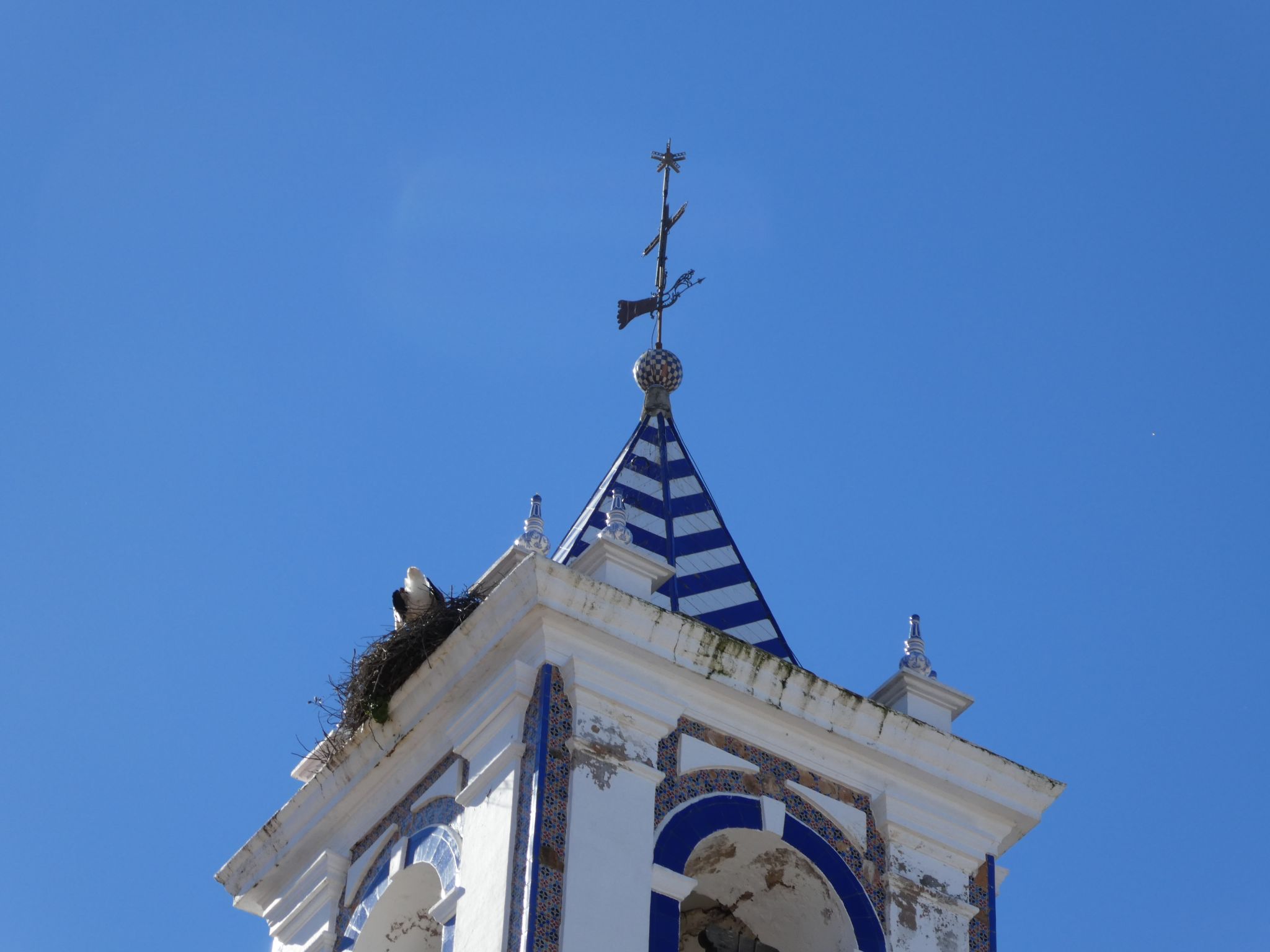 With profuse apologies, the local representative of the walking company picked us up and drove us to our intended destination.

Day 3 – Cortelazor to Fuenteheridos:  No shooting risk today – apparently it’s only on the weekends.  The walk followed foot trails through light forest and up to some view points.  The weather was getting steadily warmer, perfect walking weather in fact, and the views across the sierras were lovely. 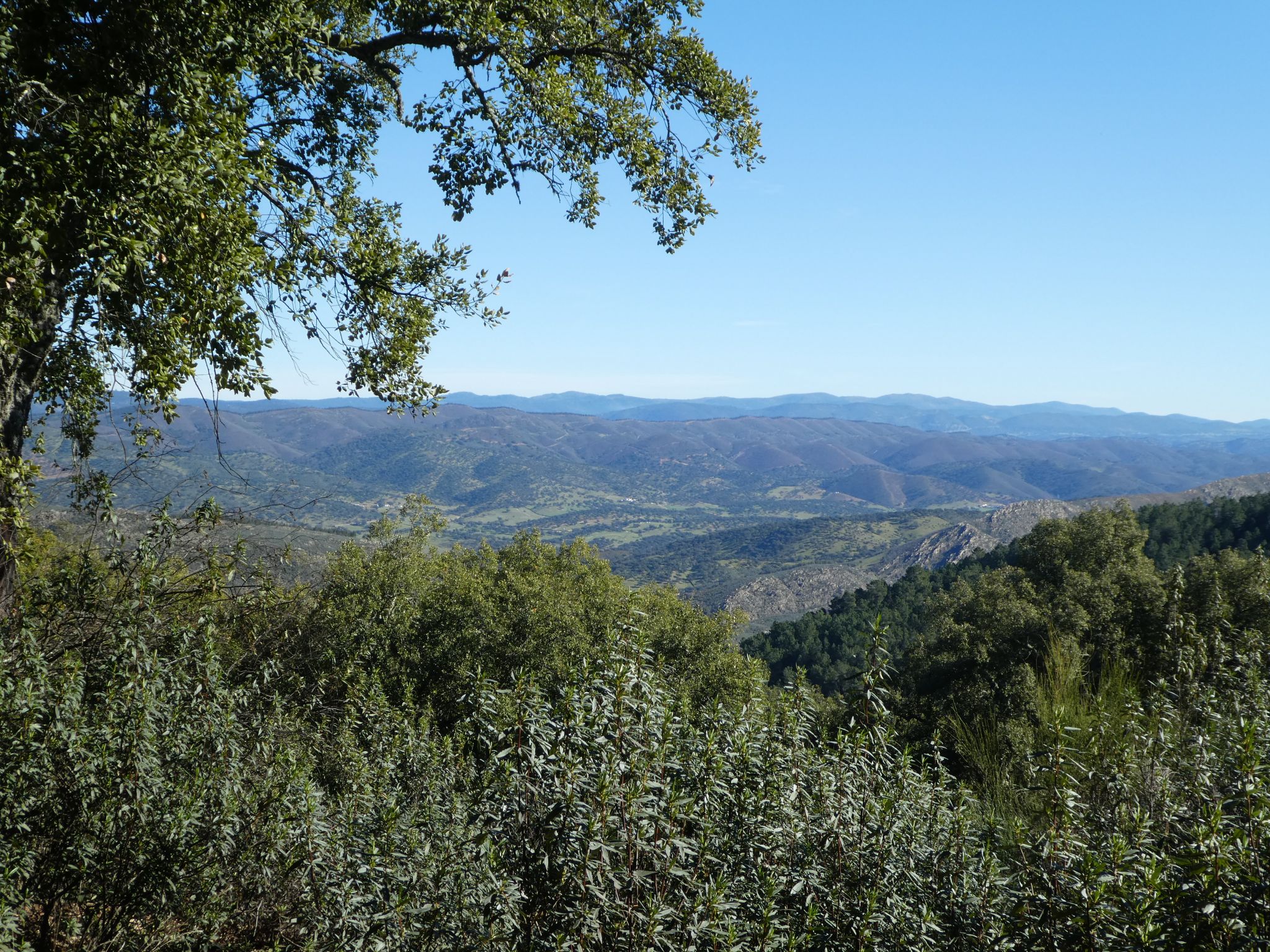 Dropping down again, the walk followed more country lanes, skirting the picturesque white villages for which this region is known. 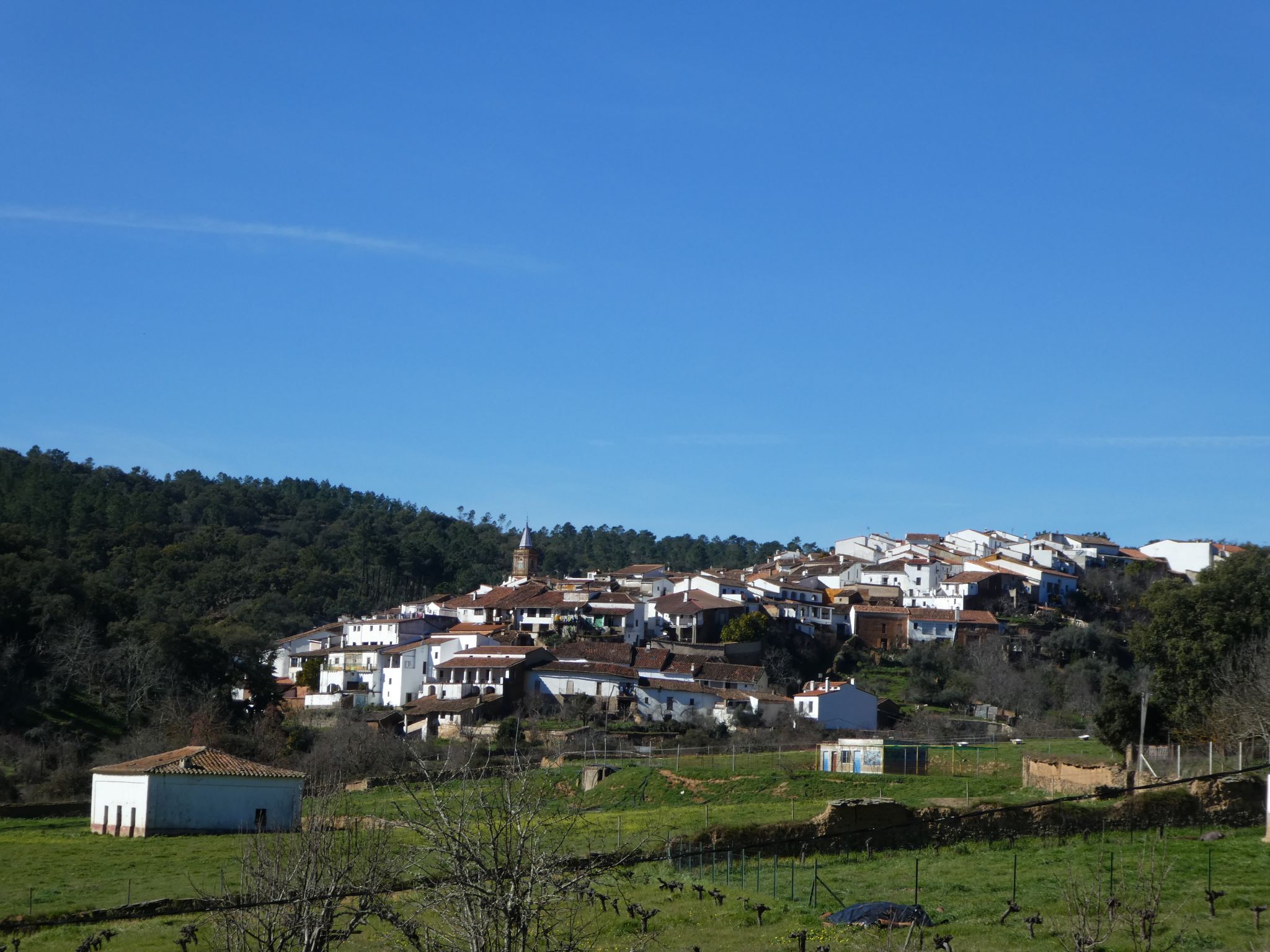 We had lunch with some friendly locals in the olive groves. 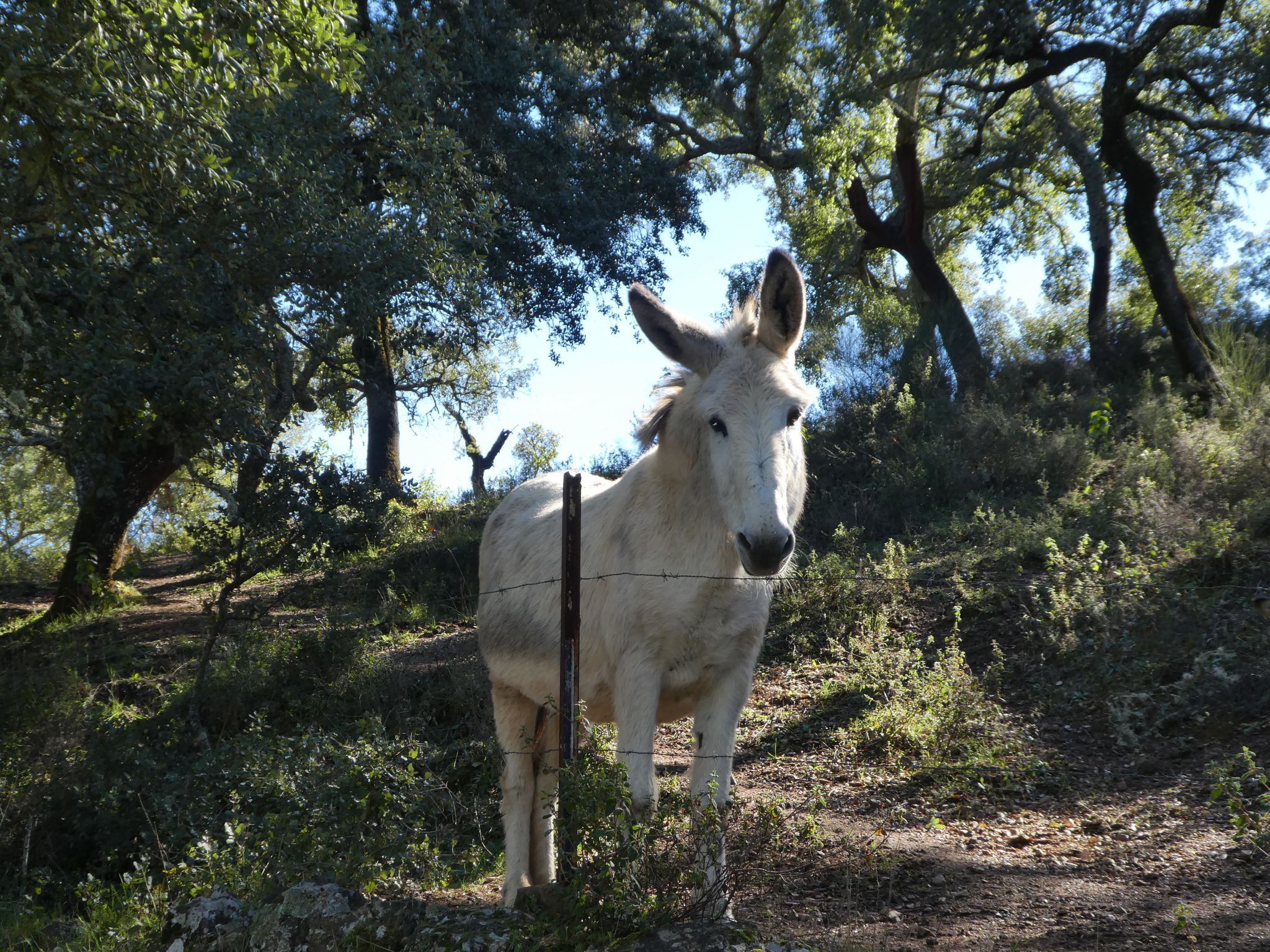 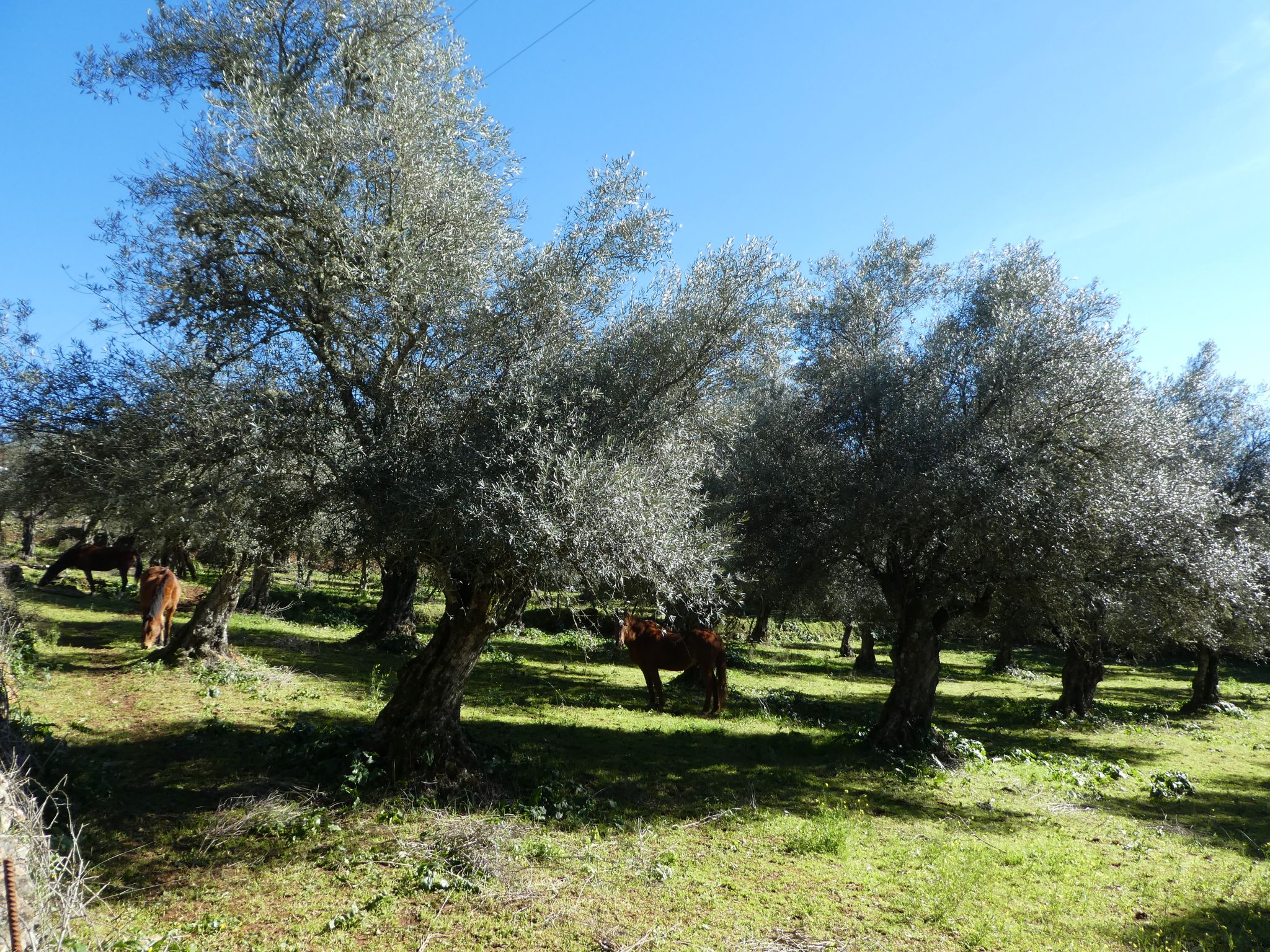 And then through cork groves, where the trees showed the signs of having been stripped.  Most Spanish wine is still produced under cork and many Spaniards are dismissive of screwcaps on wine.  Don’t even think about suggesting that the reason screwcap is so popular in the new world is that dodgy Spanish corks have caused too much spoilage.  No, no, no.  They must have been Portuguese corks … apparently. 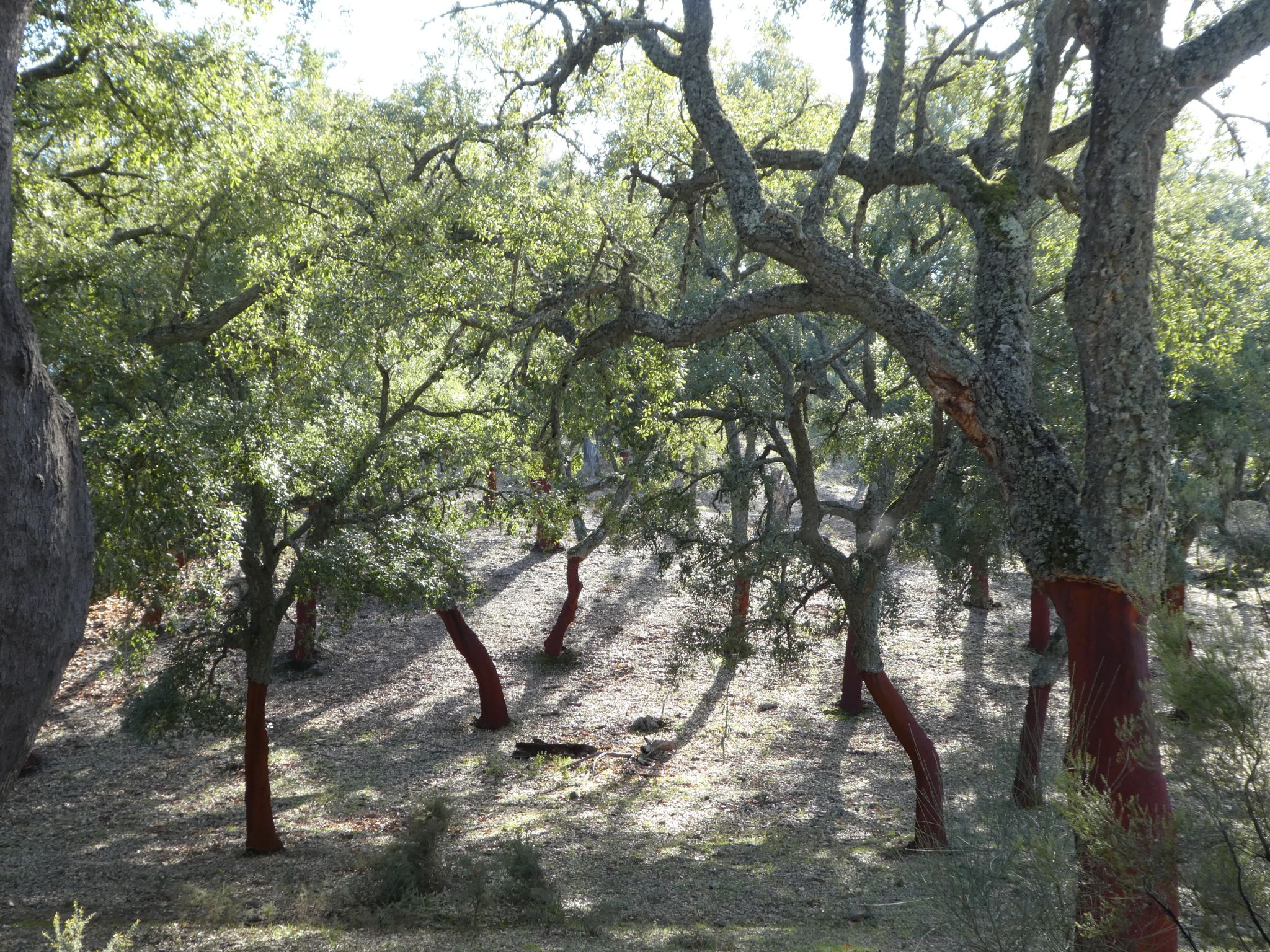 Our accommodation that night was a 19th century olive oil mill which has been renovated and converted into a boutique hotel.  With a roaring fireplace and an ‘honesty-system’ bar, it was a great place to unwind and gather our strength for grilled pork at the local bar for dinner.

Day 4 – Fuenteheridos to La Fronda:  Fuenteheridos was another quintessentially picturesque white village.  As is typical in the area, it has a pleasant square and an ancient public water fountain. 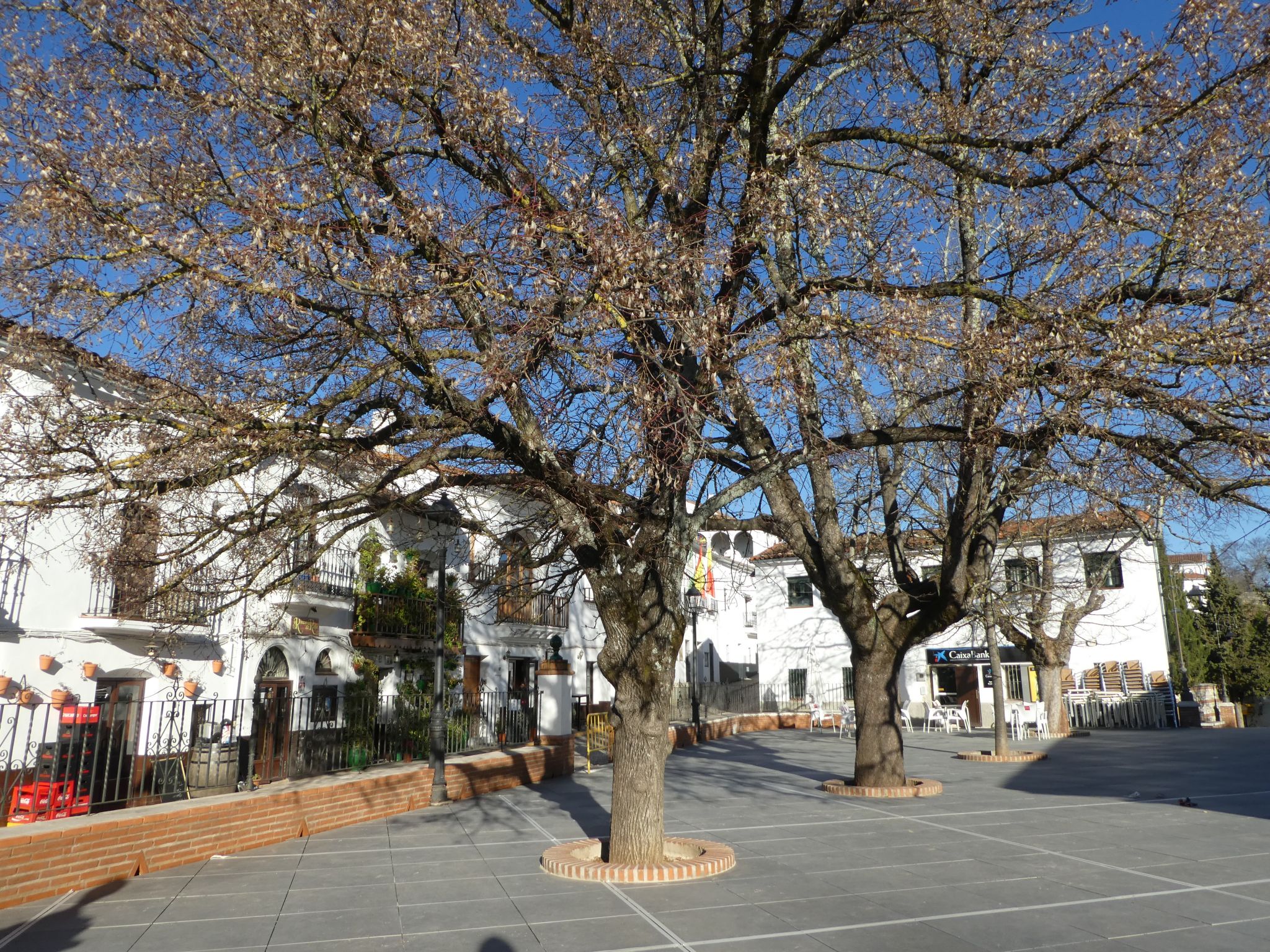 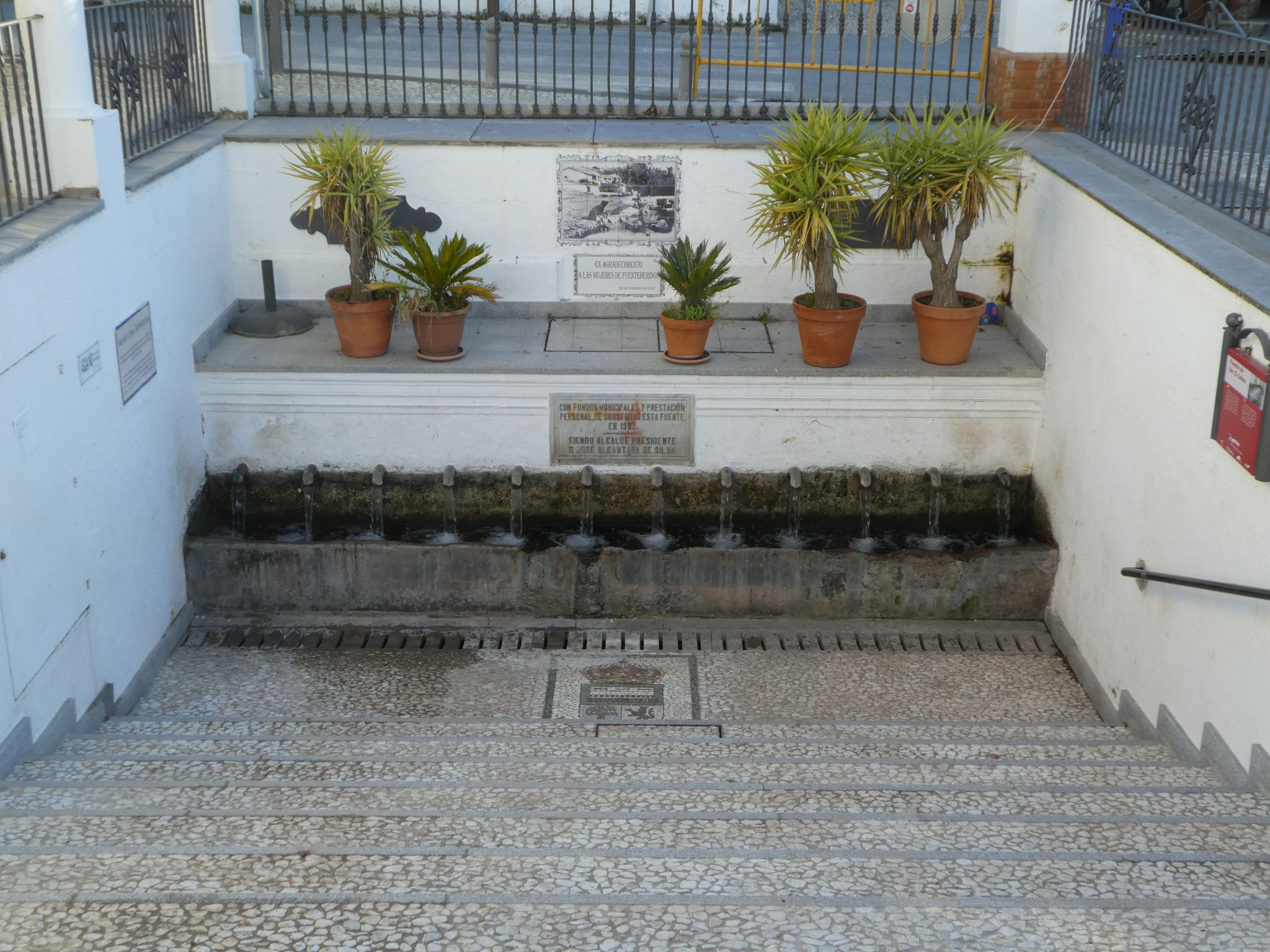 As on the previous days, once we left town we saw no other walkers, but horse riding is popular here.  As well as locals, urbanites from Seville and further afield come here to enjoy riding in what is very beautiful country. 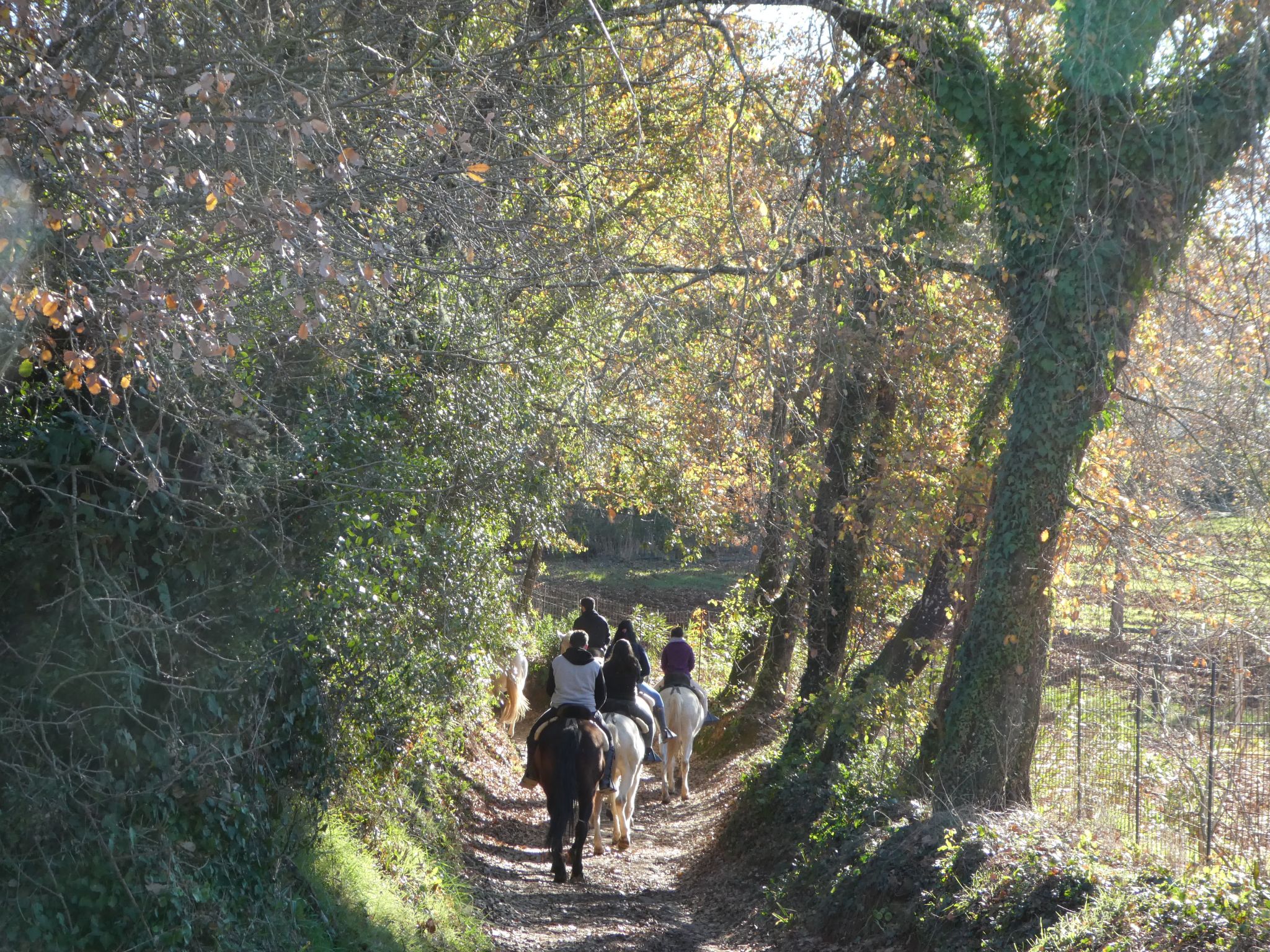 We passed through another white village, Galaroza.  Like all of them, it is spotless, with a square, a bell tower and an ancient fountain.  This one also sported some nice, locally themed murals. 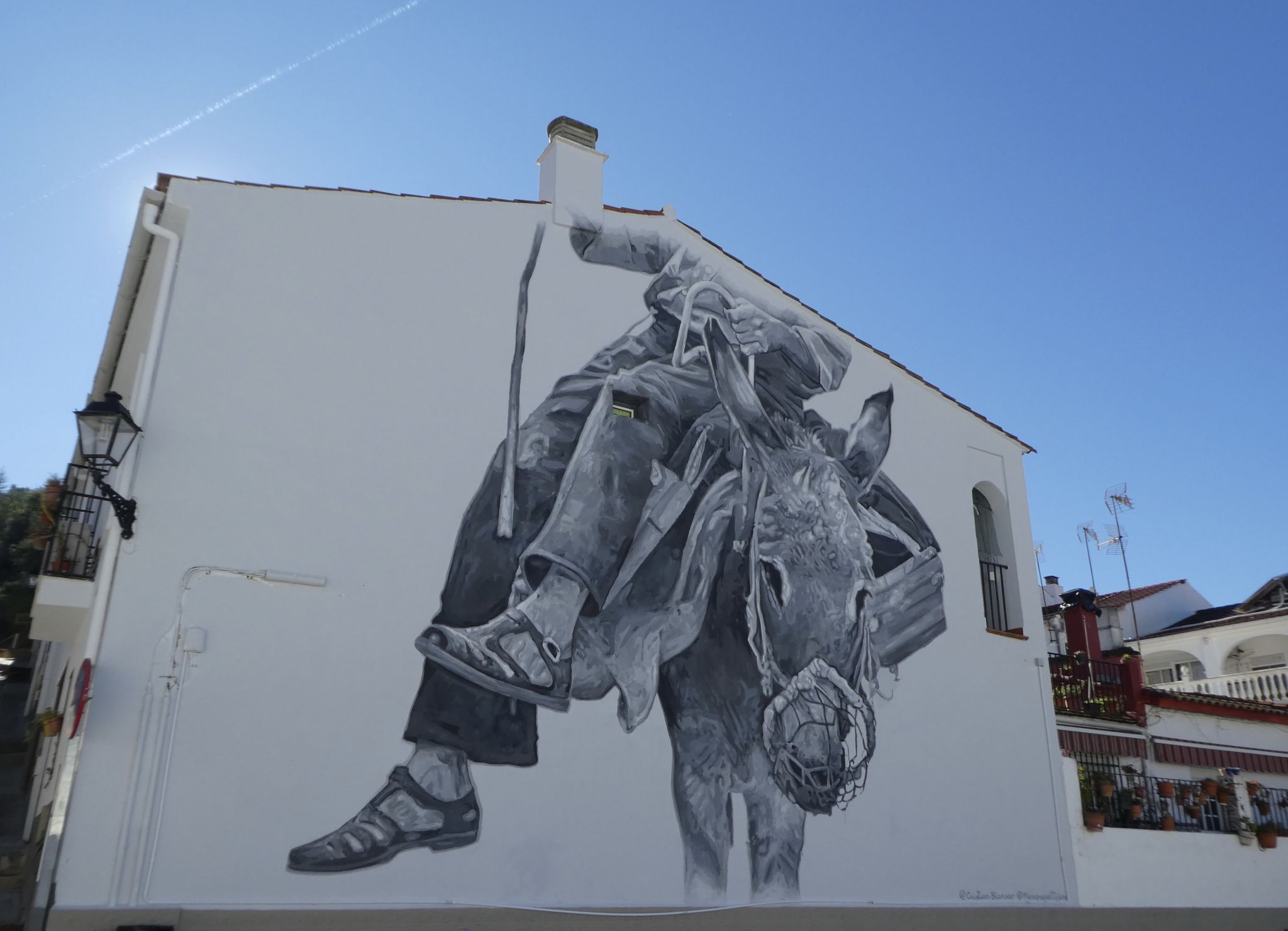 Out of town we followed country lanes to the village of Castano de Robledo, dominated by an ancient monastery on the edge of town. 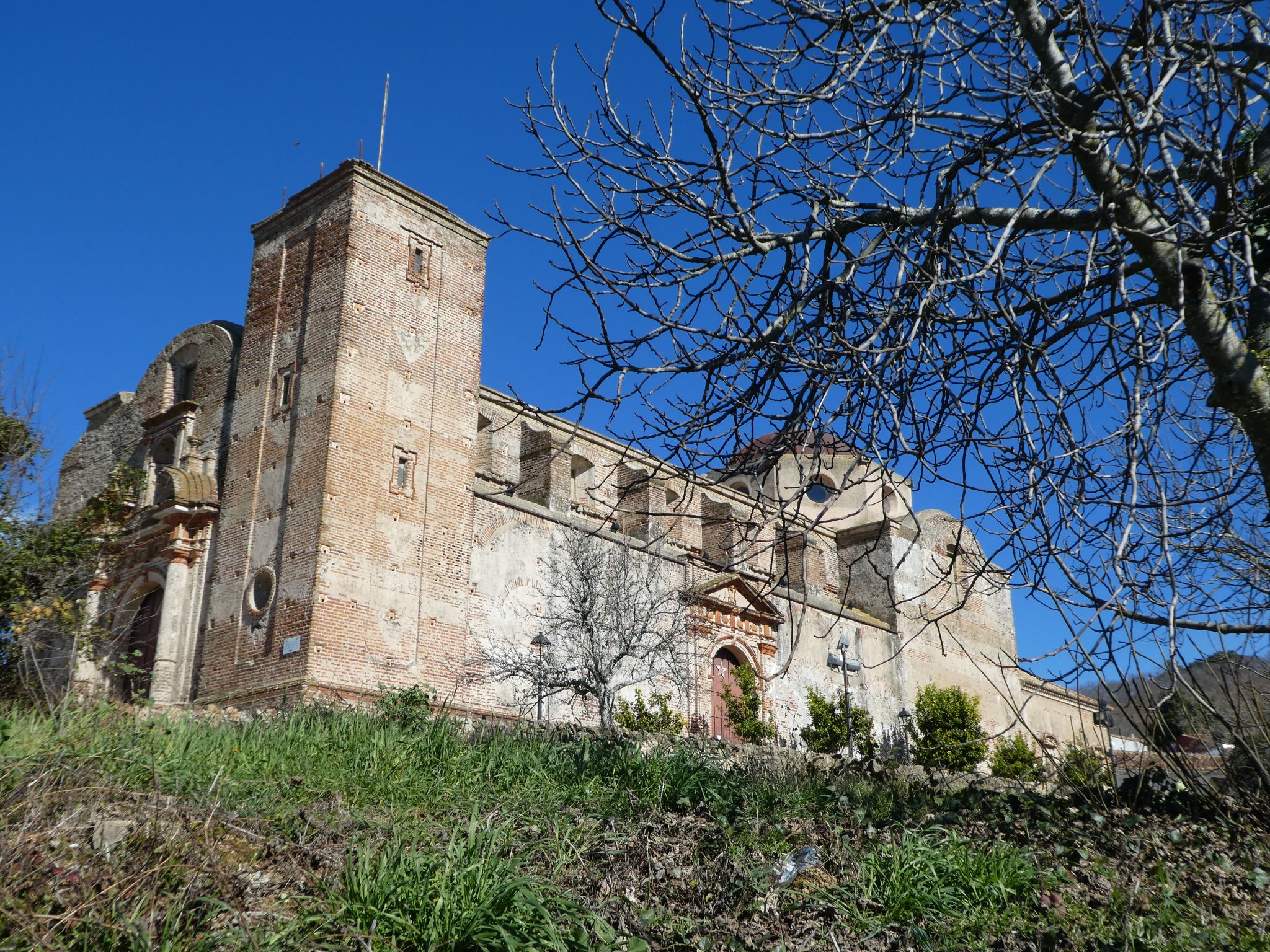 The town has the usual pretty square with a nice cafe outside an old church.  We thought about stopping but it seemed the local primary school was having ‘let kids do whatever the hell they want’ day.  The square was full of screaming pre-teens.  Whoever said young people are all migrating to the big cities has not been here.  We walked on.

Some hours and a steep climb later we came to Sanctuary Arias Montano, high on Mount Pena, with great views over the valleys and the nearby town of Alájar. 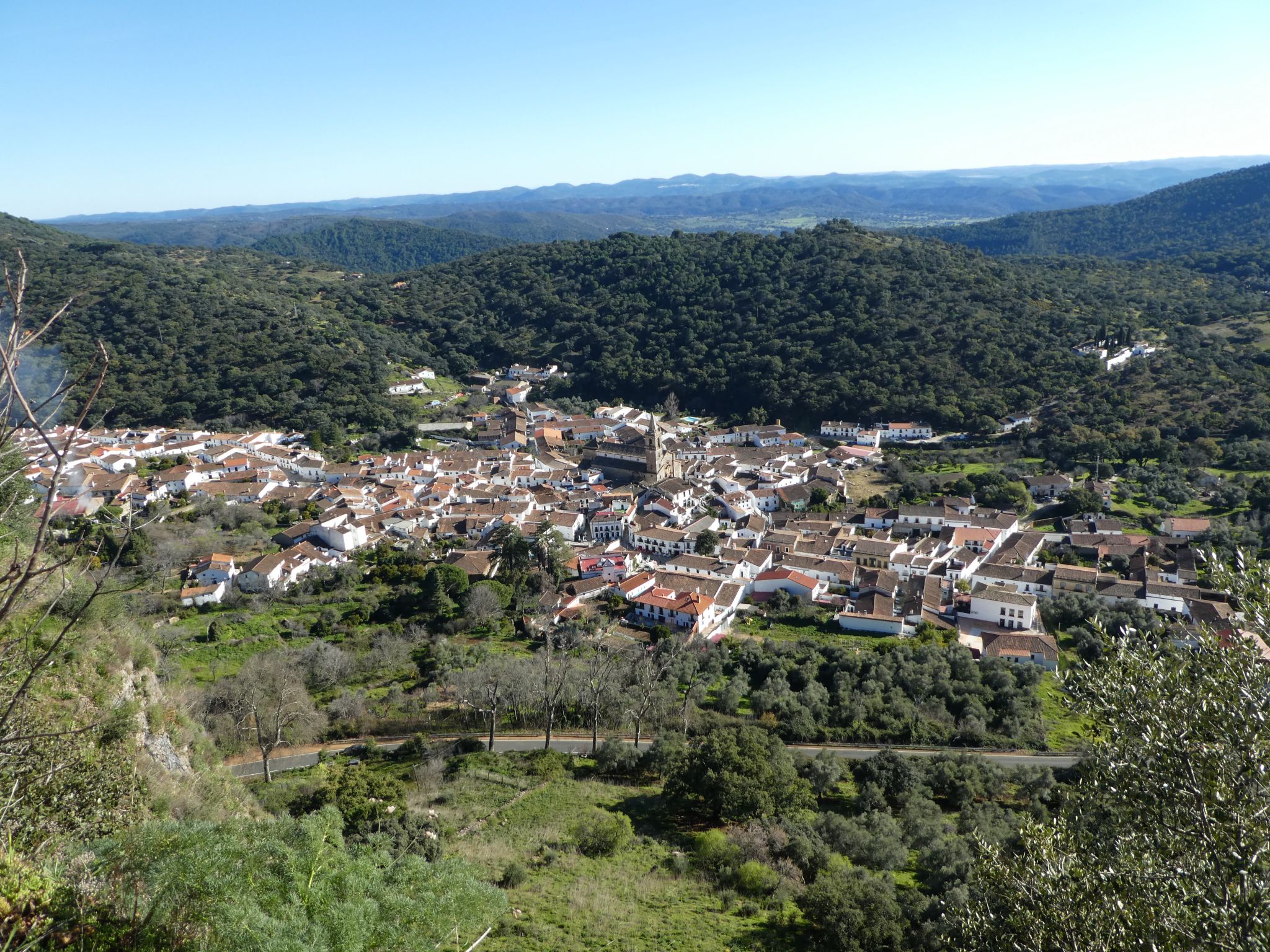 The sanctuary is a site of pilgrimage for the veneration of Our Lady, Queen of Angels.  Or is it the veneration of jamon?  It looks so sedate this time of year, but an annual festival involves a procession of the holy statue from Alájar to the mountain top church followed by a day long festival of local pork in all its forms, washed down with liberal doses of sangria.  We were sorry not to have been here in September for that. 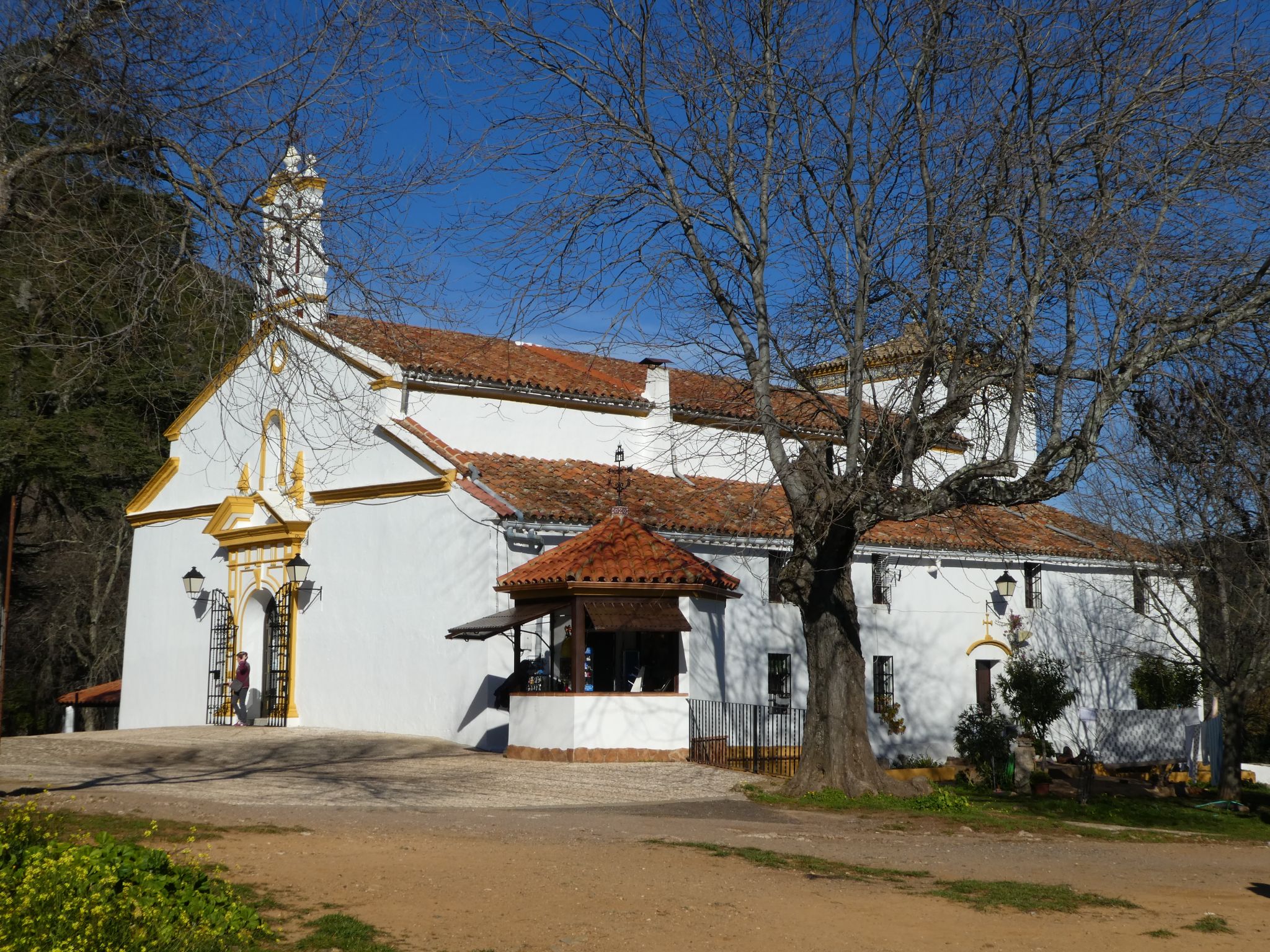 We headed on to our accommodation for the night, La Finca de Fronda.  Owned by a family who are descendants of William Wordsworth, there’s a real emphasis on local produce in all their meals.  They make their own breads and jams, and meals feature local walnuts, mushrooms, cheeses, olive oil etc.  Our meal there was more than adequate compensation for missing the pork, sorry, religious, festival at the sanctuary.

Day 5 – Loop walk to Linares:  It’s not often our walking notes effectively say ‘take a pleasant two hour stroll through the mountains and arrive at yet another picturesque white village where we have arranged for you to have a five course degustation lunch at one of the best restaurants in the district’. 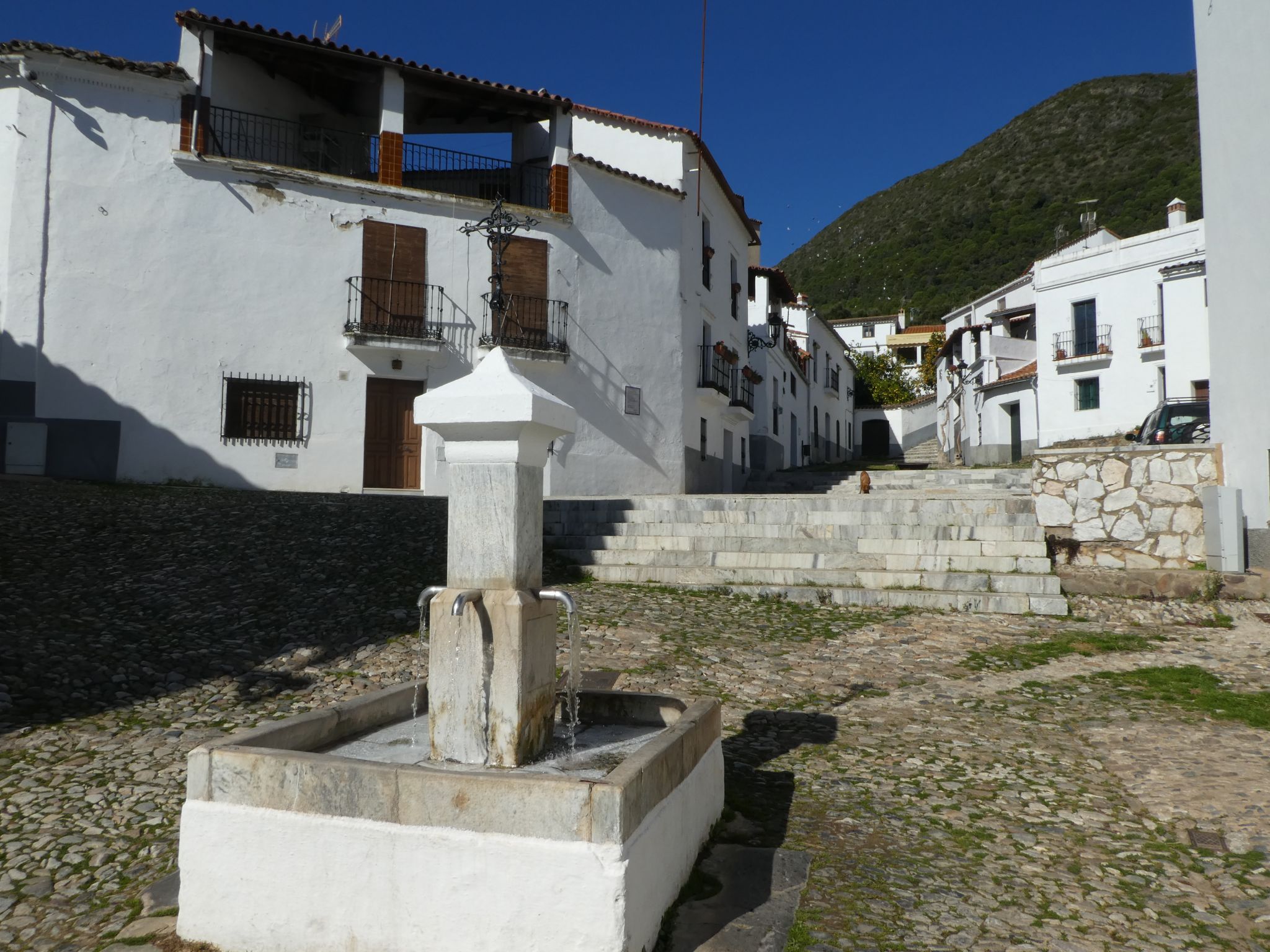 Lunch was packed full of fresh, interesting local flavours, including of course local pork.  There was an option to get a taxi back, but the Protestant in John decided some work had to be done to warrant this indulgence, so we walked instead.

Day 6 – La Fronda to Aracena:  Our final day once again followed tracks used by locals for centuries to walk between villages, and country lanes through the cork forest.  The weather had been getting warmer by the day and it was now perfect walking temperature.  Spring was definitely unfolding. 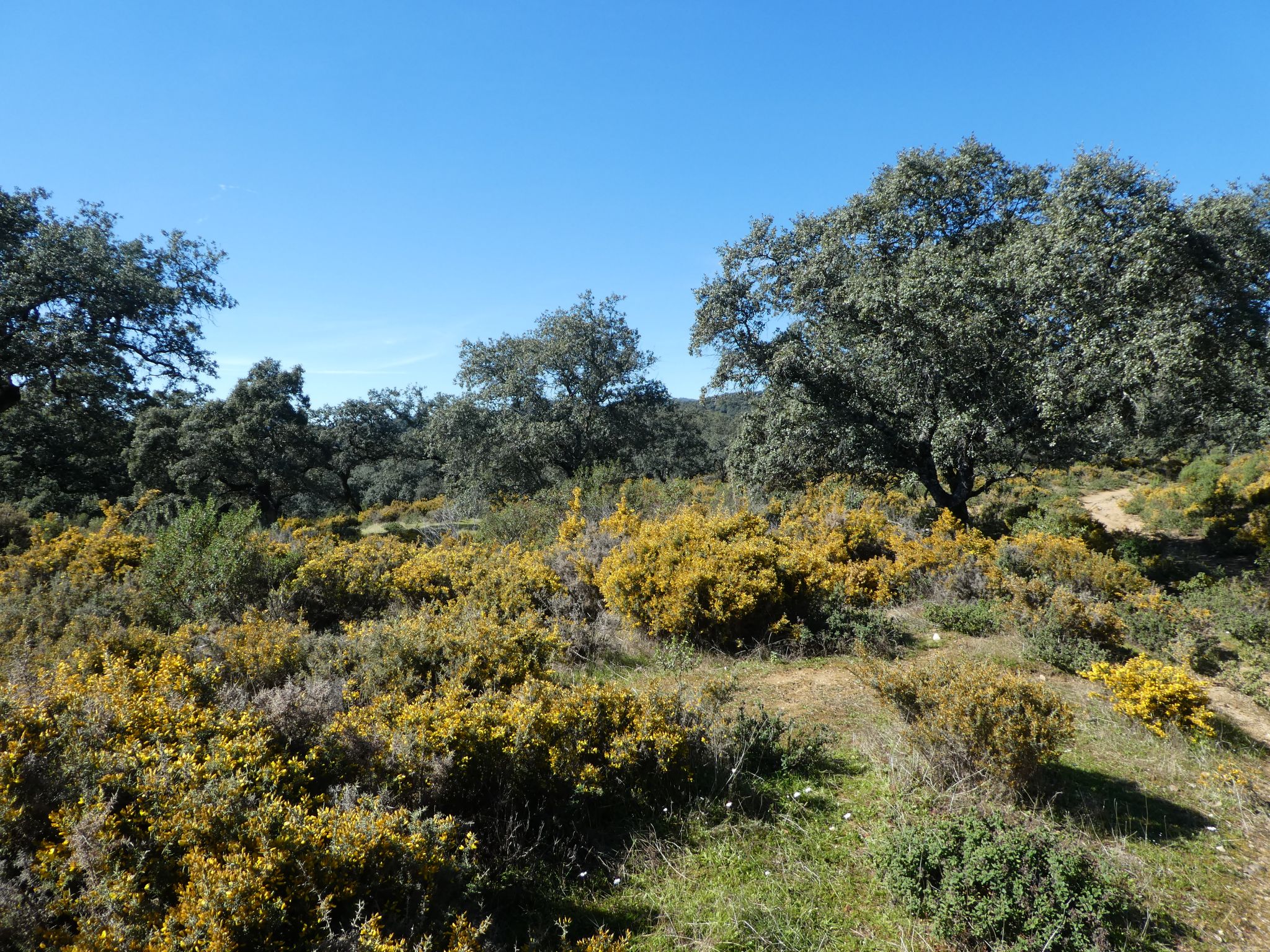 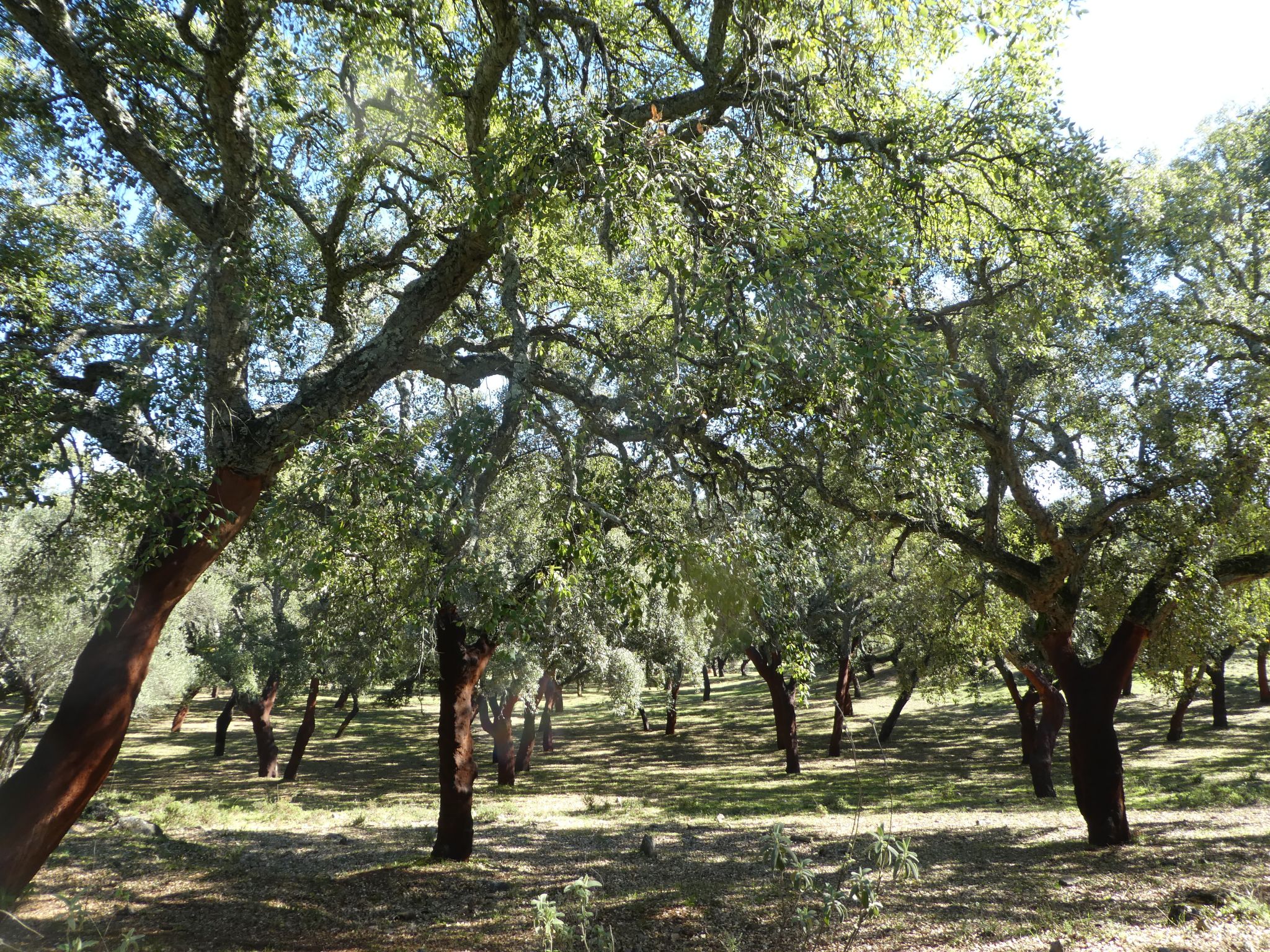 Back in Aracena we ended the walk the only way that seemed fitting – with a stunning feed of suckling roast pork.  Ok, we are going to breach our own rules twice in one post, and post another food photo. 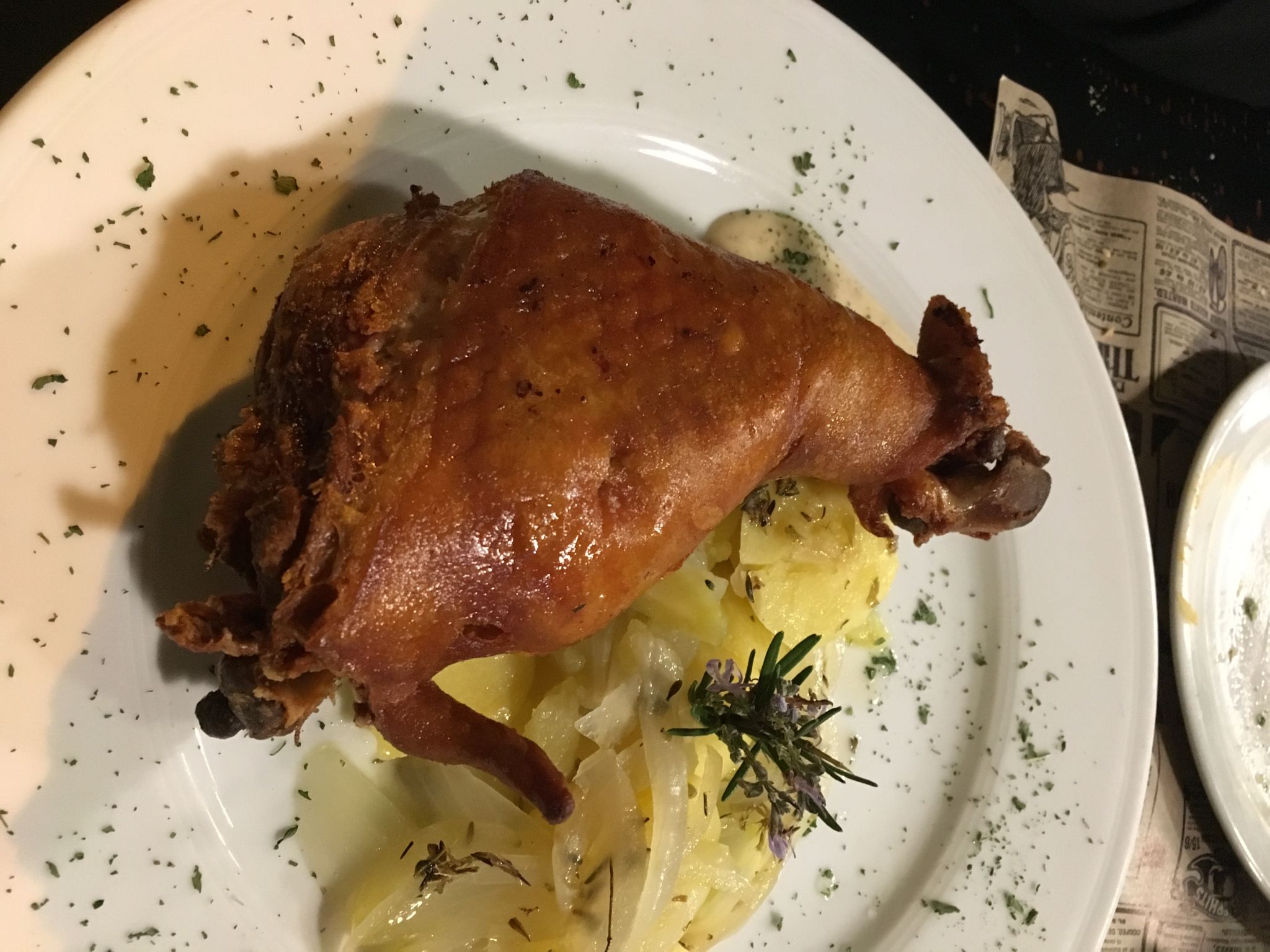 Wrap up:  This was not a ‘serious’ hike, it was more of a series of pleasant walks through lovely countryside linking great local food experiences and staying at some unique local properties.  We got the isolation we always value on a walk.  There are few walkers in February as it can be cold and wet, but we were lucky and had stunning blue sky days and only one cold morning.

We organised the walk through Pura Aventura.  The trail notes were high standard, the logistics were faultless and they were always responsive.  They specialise in Iberia, and we’d highly recommend them for a walk in this part of the world.