In the 15th and 16th centuries, Portugal spearheaded the Age of Discovery.  When Vasco da Gama discovered the sea route to India, Portugal got the jump on the rest of Europe in dealing with the East.  In this period it had a monopoly on the spice trade via colonies in Goa in India and Malacca in Malaysia, controlled European trade with Japan and established colonies in Africa.  Later, it pillaged great reserves of gold from Brazil.  One of western Europe’s oldest cities, Lisbon also became one of its biggest.  It was the capital of Europe’s first truly global empire and unimaginable wealth flooded in.

It wasn’t all plain sailing, so to speak.  In 1755, Lisbon was struck by three successive massive earthquakes measuring between 8.3 and 9.1 on the Richter scale.   An estimated one-third of its population of 270,000 died, and 85% of the city’s buildings were destroyed.

A swift reconstruction resulted in a more orderly city, one of the first to be built on a grid system, and the characteristic multi-story tile-fronted buildings which still characterise Lisbon today.  To test whether the building design was earthquake-resistant, scale models were constructed and earthquake conditions were ‘simulated’ by marching troops around them.  Seismic technology has come a long way since then, but the buildings do indeed still stand. 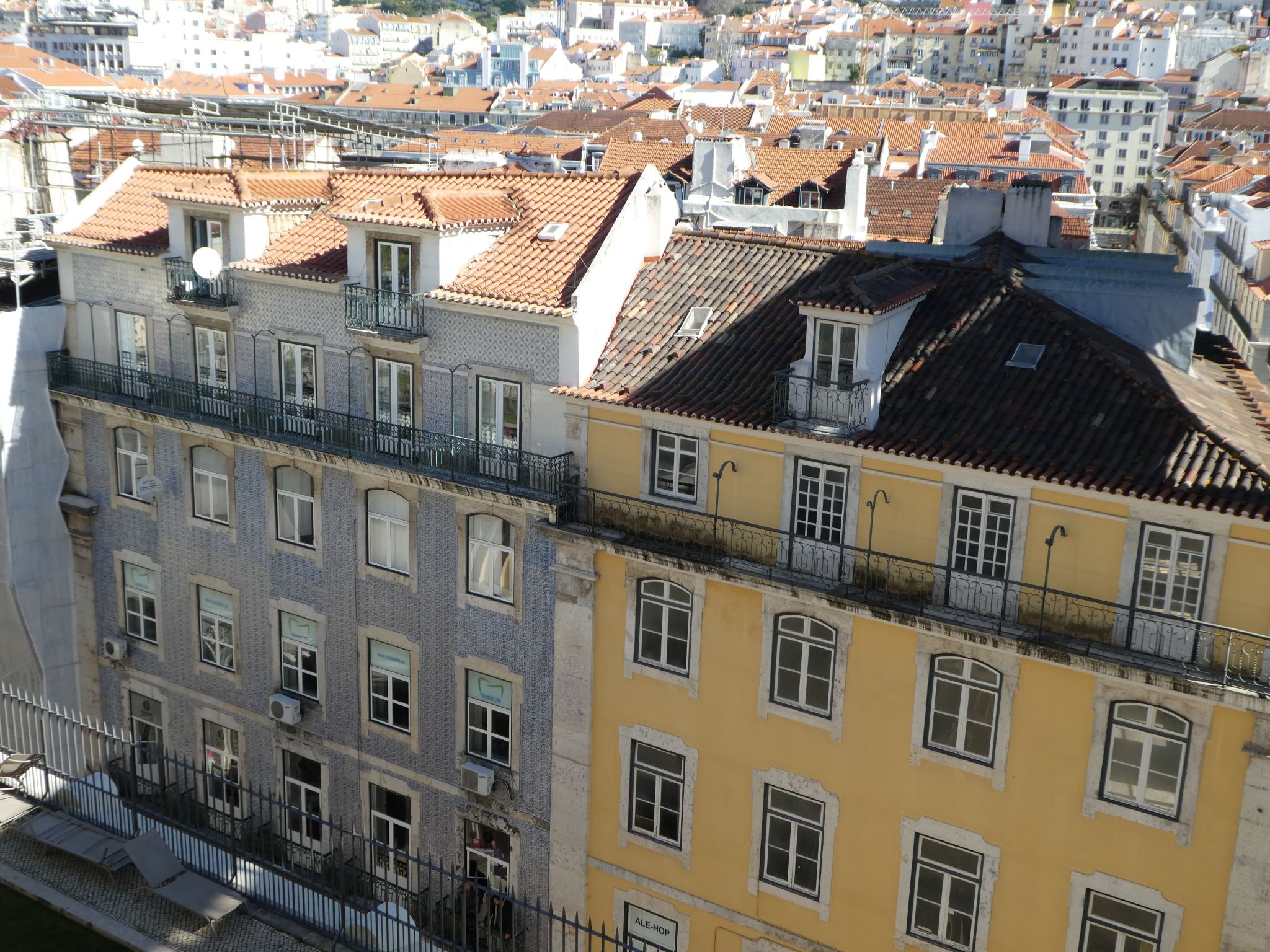 Some buildings were too damaged to be salvaged but too expensive to knock down.  The skeleton of the once magnificent Convento do Carmo stood neglected for over 200 years until cleverly converted in recent times into an archeological museum with exhibits ranging from a 4th century Greek sarcophagus to two Peruvian mummies. 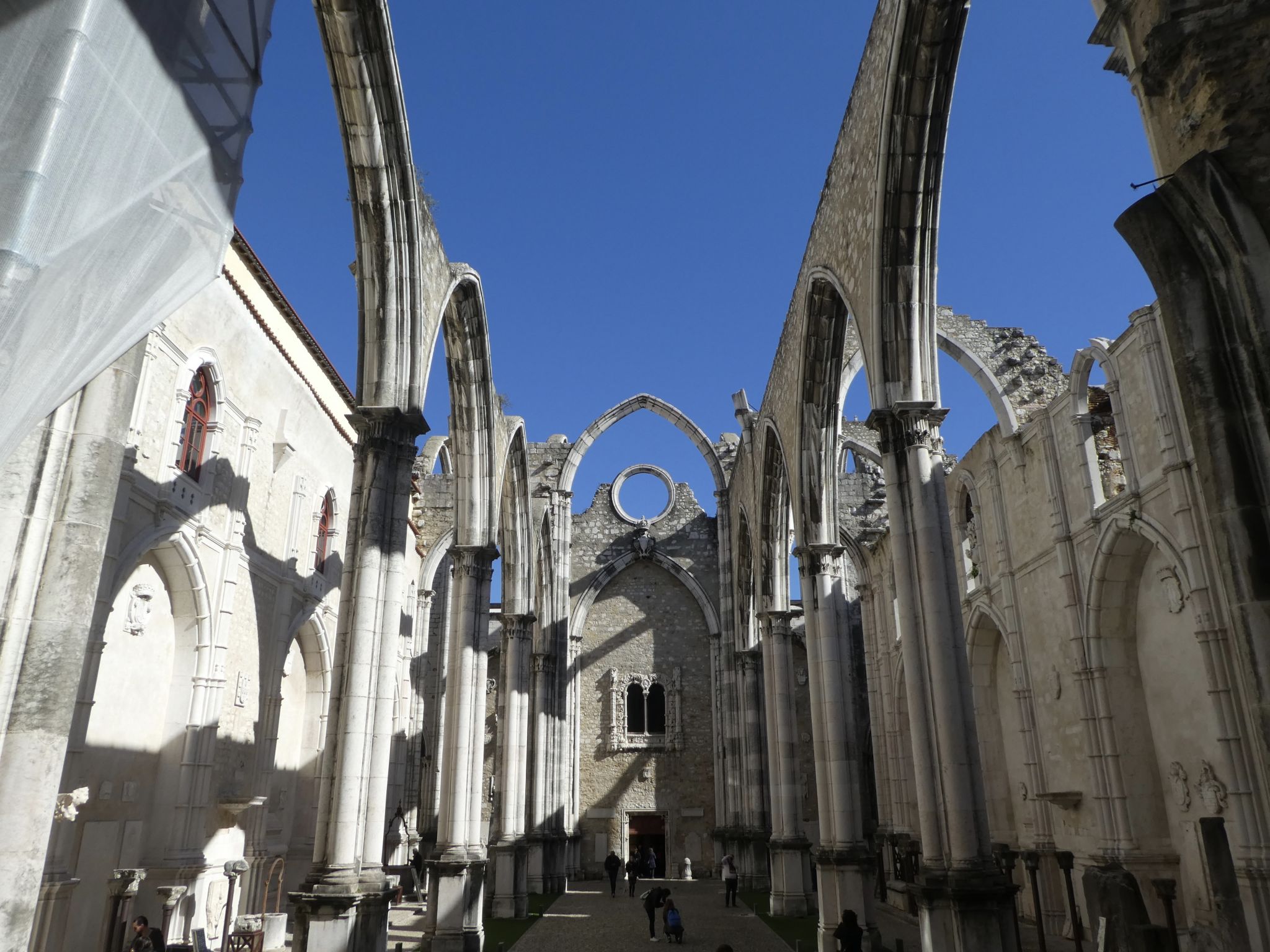 Lisbon is built on the slopes of seven hills rising up from the sea.  Despite the steep inclines, it’s a city made for walking.  The old neighbourhoods are filled with cobblestone lanes linked by staircases and wandering is the best way to get a feel for everyday life in the old parts of the city.  There’s even the occasional outdoor escalator. 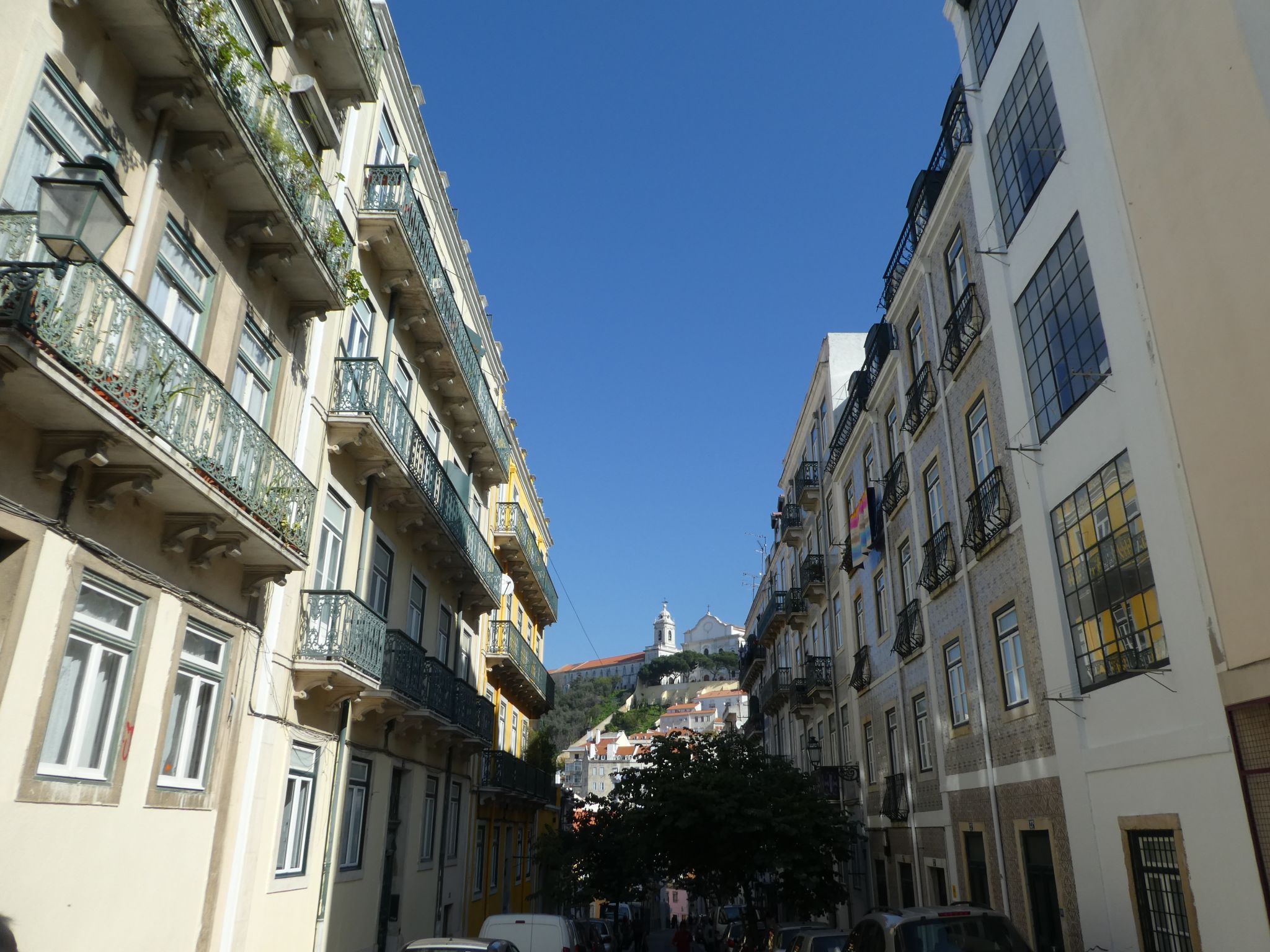 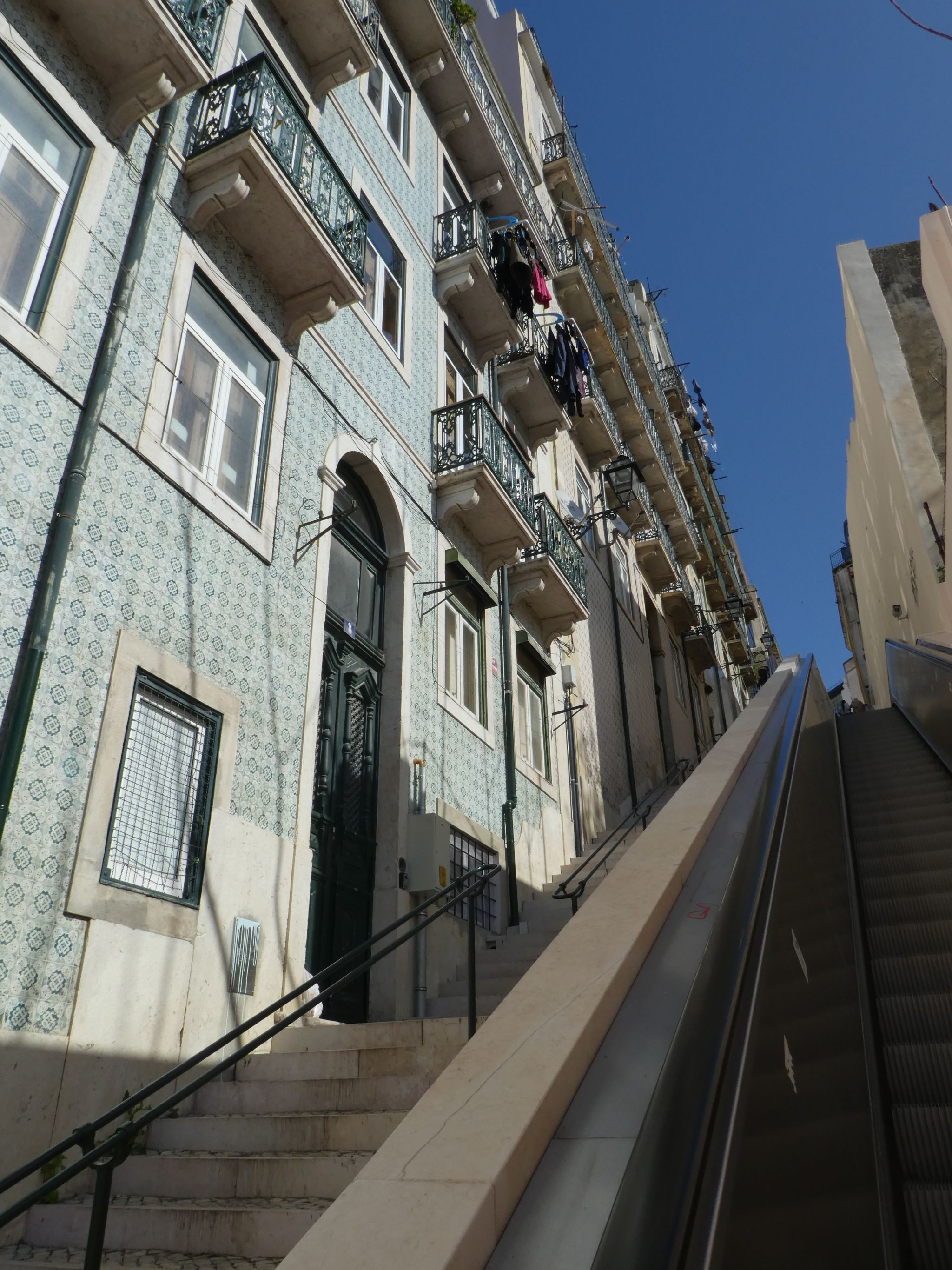 On every major hilltop there is a ‘miradouro’, a plaza with views over the city and the harbour.  Some have views to the 11th century fortification, Castelo de Sao Jorge or the Monastery of Saint Vincent da Fora. 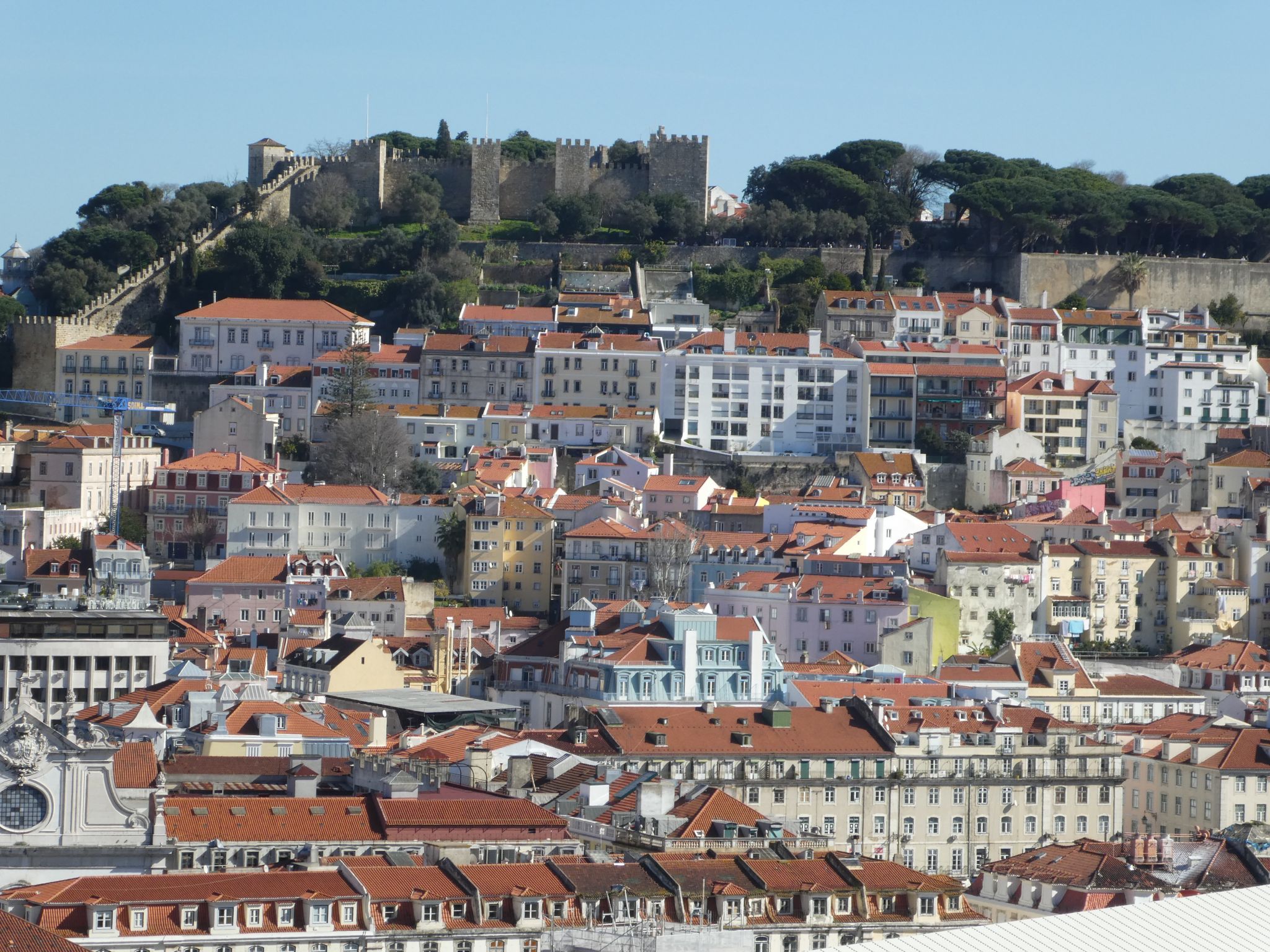 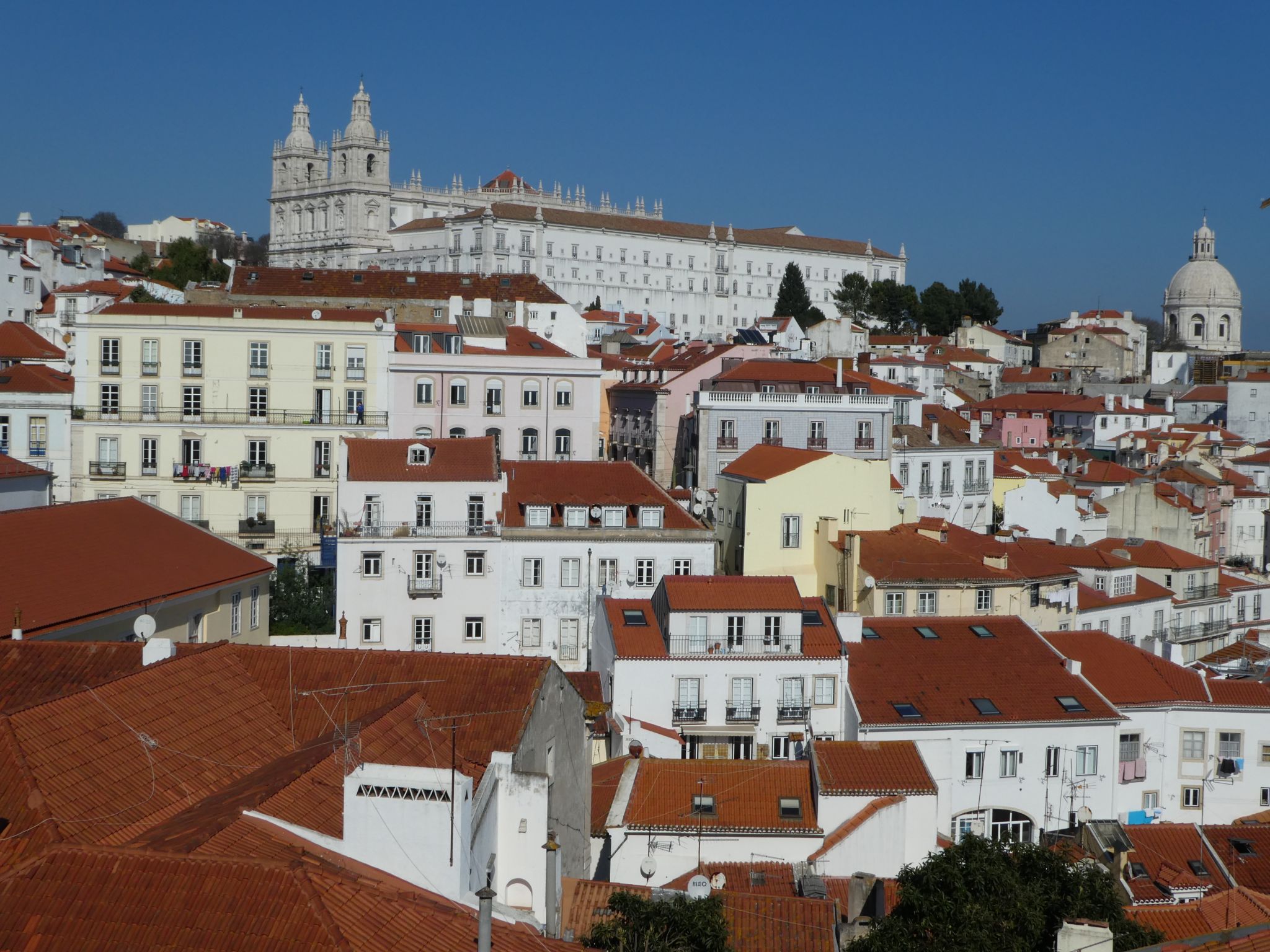 If climbing the hills seems like too much hard work you can always catch Lisbon’s only vertical street lift, Elevador Santa Justa.  This delicate wrought iron structure was designed by Raoul Mesnier du Ponsard, an apprentice of Gustave Eiffel.  After he was fully qualified, we assume.

You can’t see it in the photo, but behind the platform at the top is a walkway to the upper street – it was built for practical use, not just as a viewing platform.  There are other more modern elevators around town which are used by locals to move around the city.  Most of them are free, but Santa Justa has become a major tourist attraction and now costs €5, which has led locals to call it Santa Injusta. 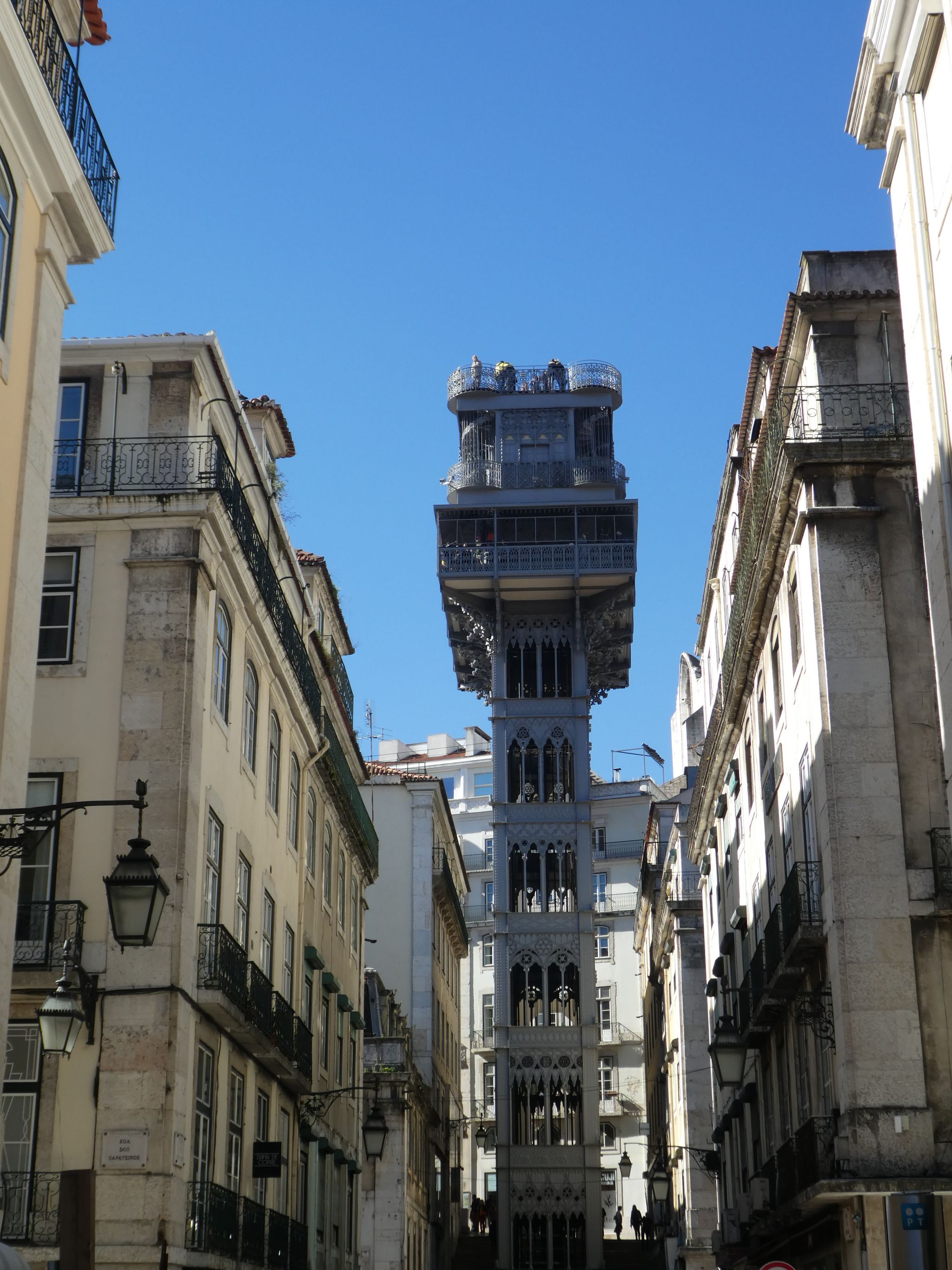 Or you could ride one of the funiculars which trundle like ancient iron beasts up some of the very steep sections.  Ascensor Da Gloria is Lisbon’s second oldest funicular, built in 1885.  It was originally powered by a water counterweight system, converted to steam power in 1905, and electrified in 1915.  It’s still going strong.  Albeit slowly. 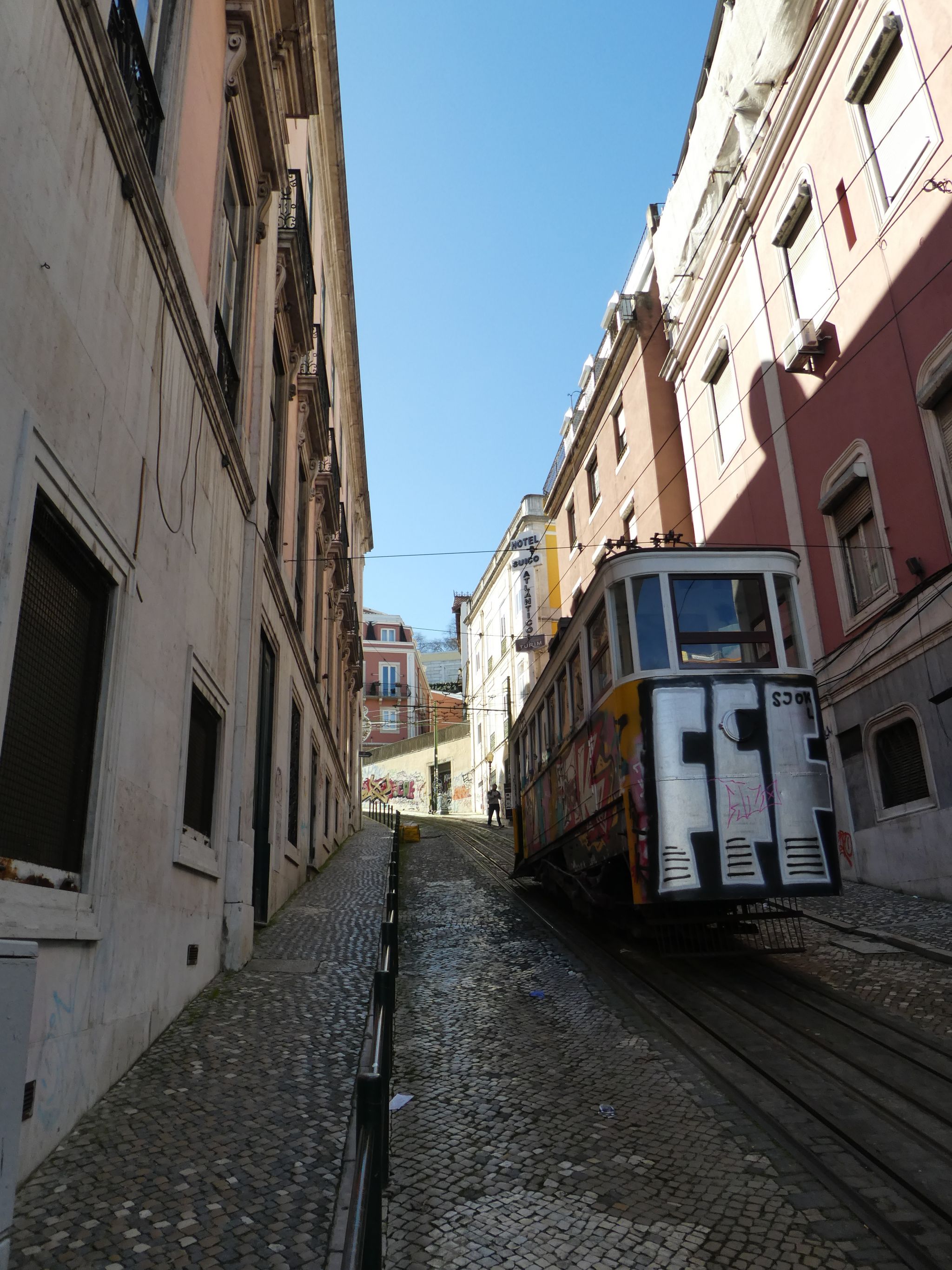 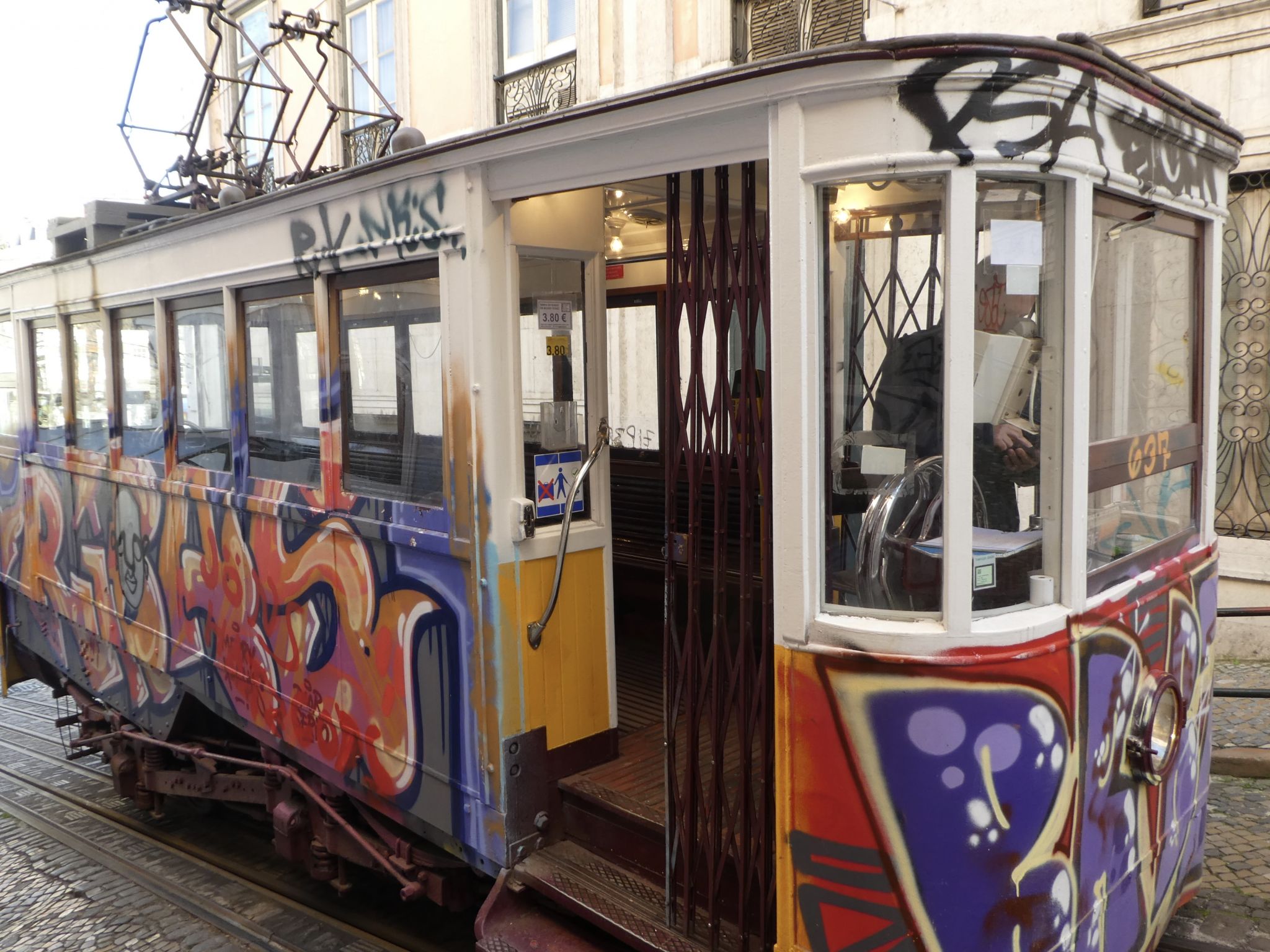 As you would expect in a country with such a strong Catholic heritage, Lisbon has some impressive religious buildings, ranging from cathedrals to monasteries and convents.  The show-stopper is the UNESCO-listed Mosteiro dos Jeronimos, commissioned by King Manuel I to celebrate Vasco da Gama’s discovery of a sea route to India.  The exterior is incredibly ornate, and Da Gama is interred in the church here.  Looks like he’s still loved by someone. 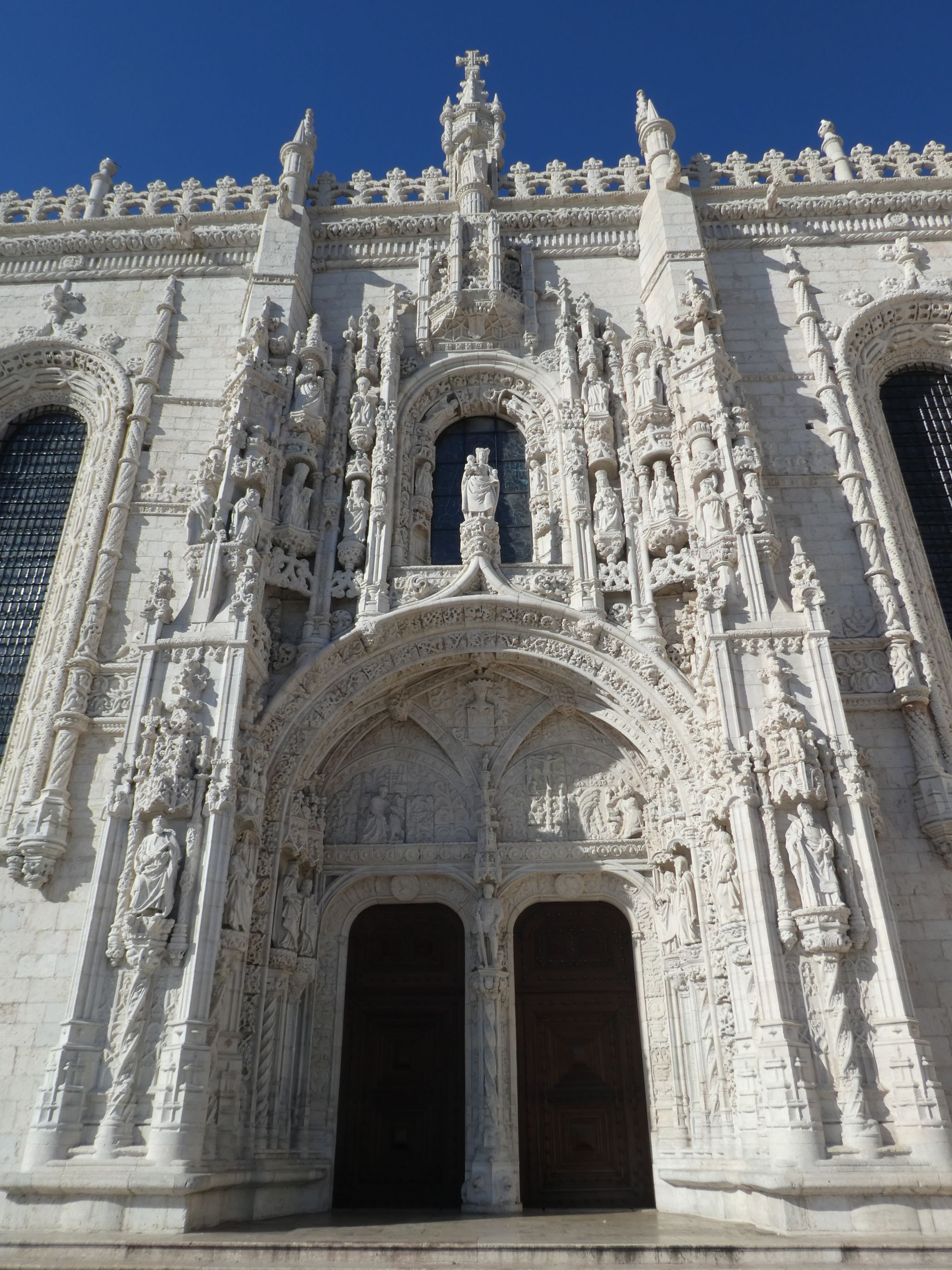 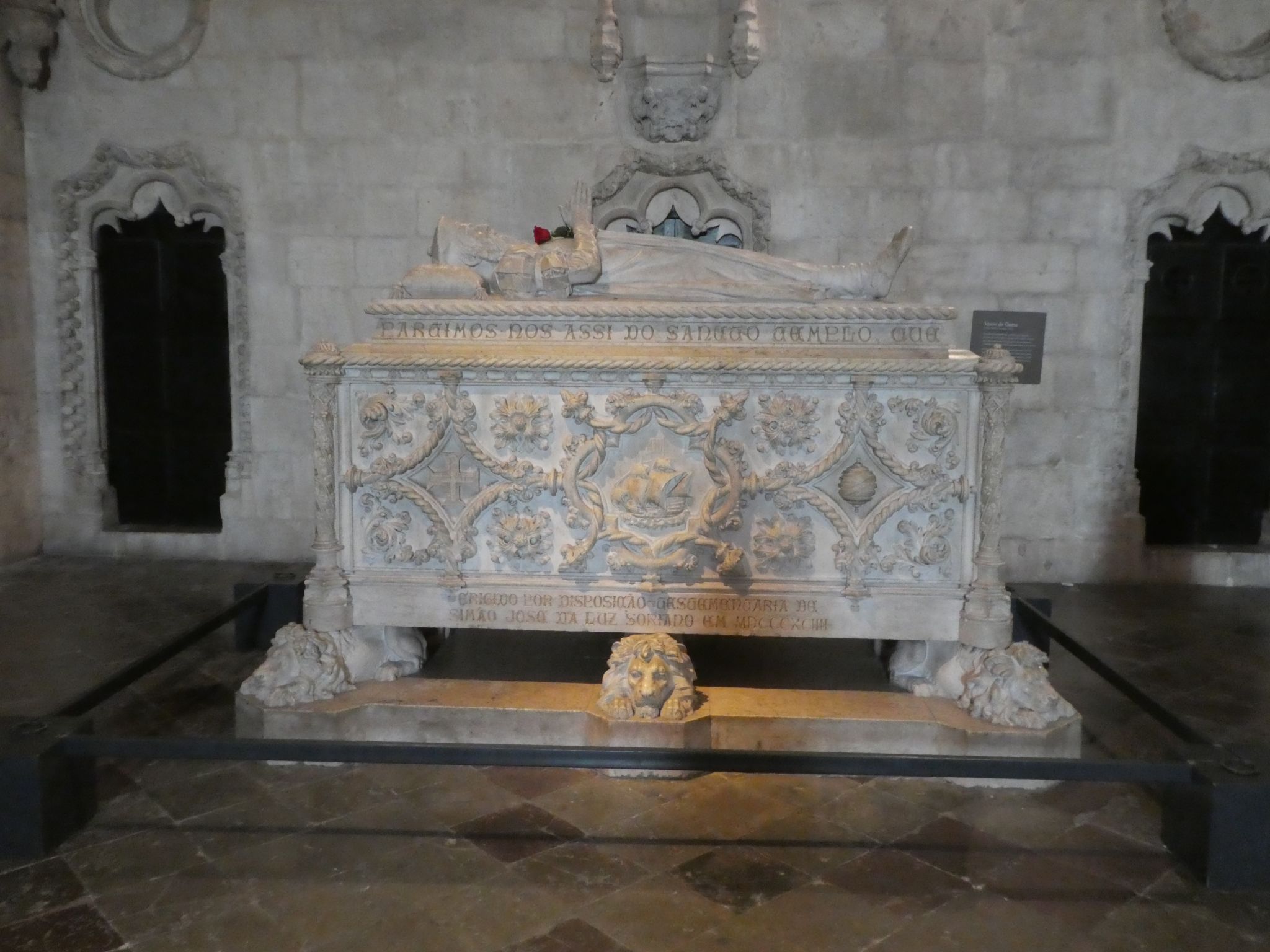 The adjoining monastery housed monks of the Order of Saint Jerome for 400 years, until the Order was dissolved in 1833.   The honey-coloured stone cloister catches the light brilliantly. 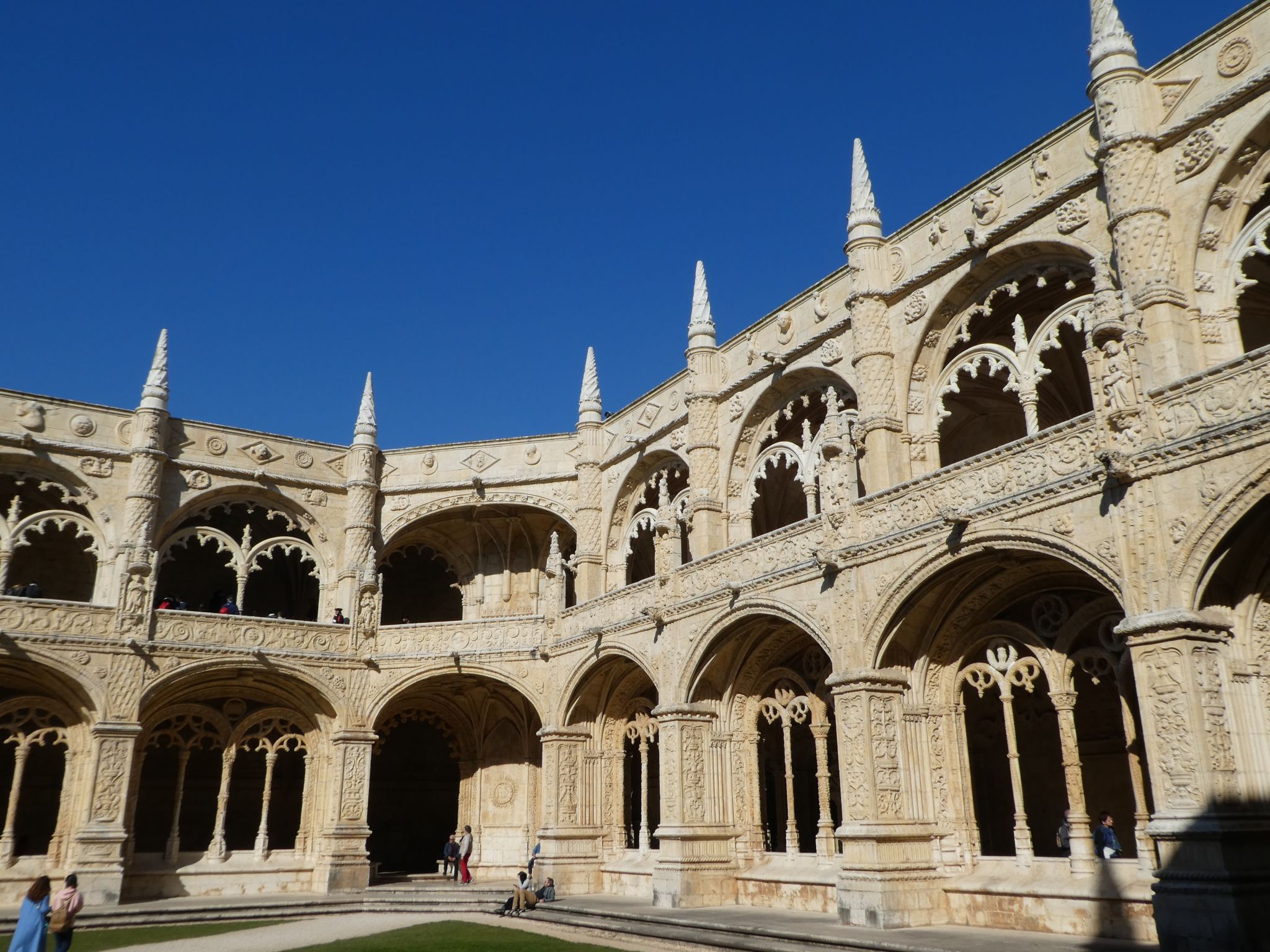 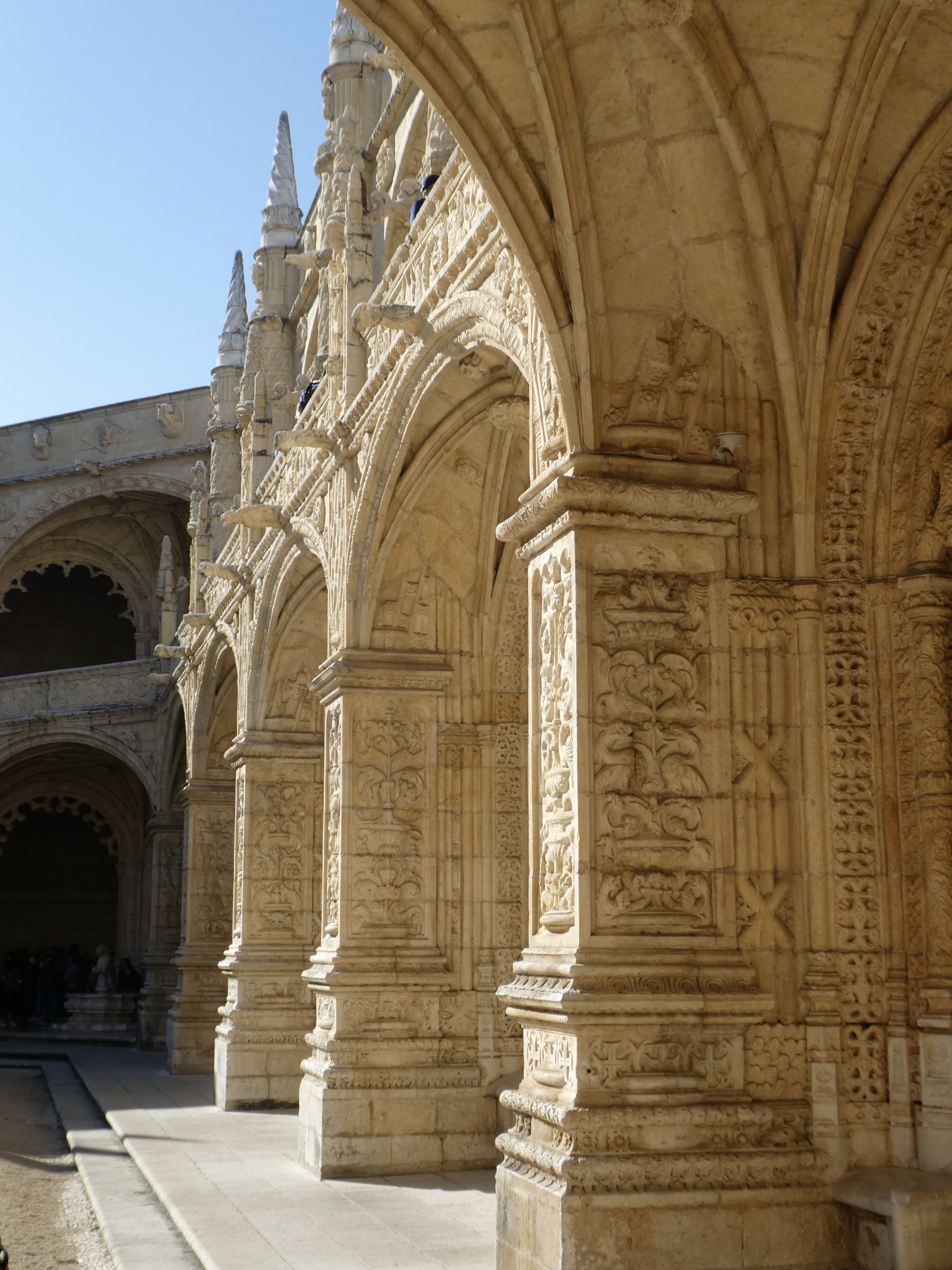 At the risk of sounding like complete nerds – ok, we are – Lisbon turned out to have a surprising number of really interesting museums.

Portugal’s monarchy was abolished in favour of a republic in 1902 when the then king and his son were both assasinated.  Europe’s longest running dictatorship dominated Portugal for most of the 20th century.  And yet somehow it has preserved so much of its royal heritage.

The National Coach Museum, in a new purpose-built facility, has one of Europe’s finest collection of horse-drawn carriages.  There are more than 70 carriages from the 17th to 19th centuries, many of which look like they are from the set of a Cinderella movie. 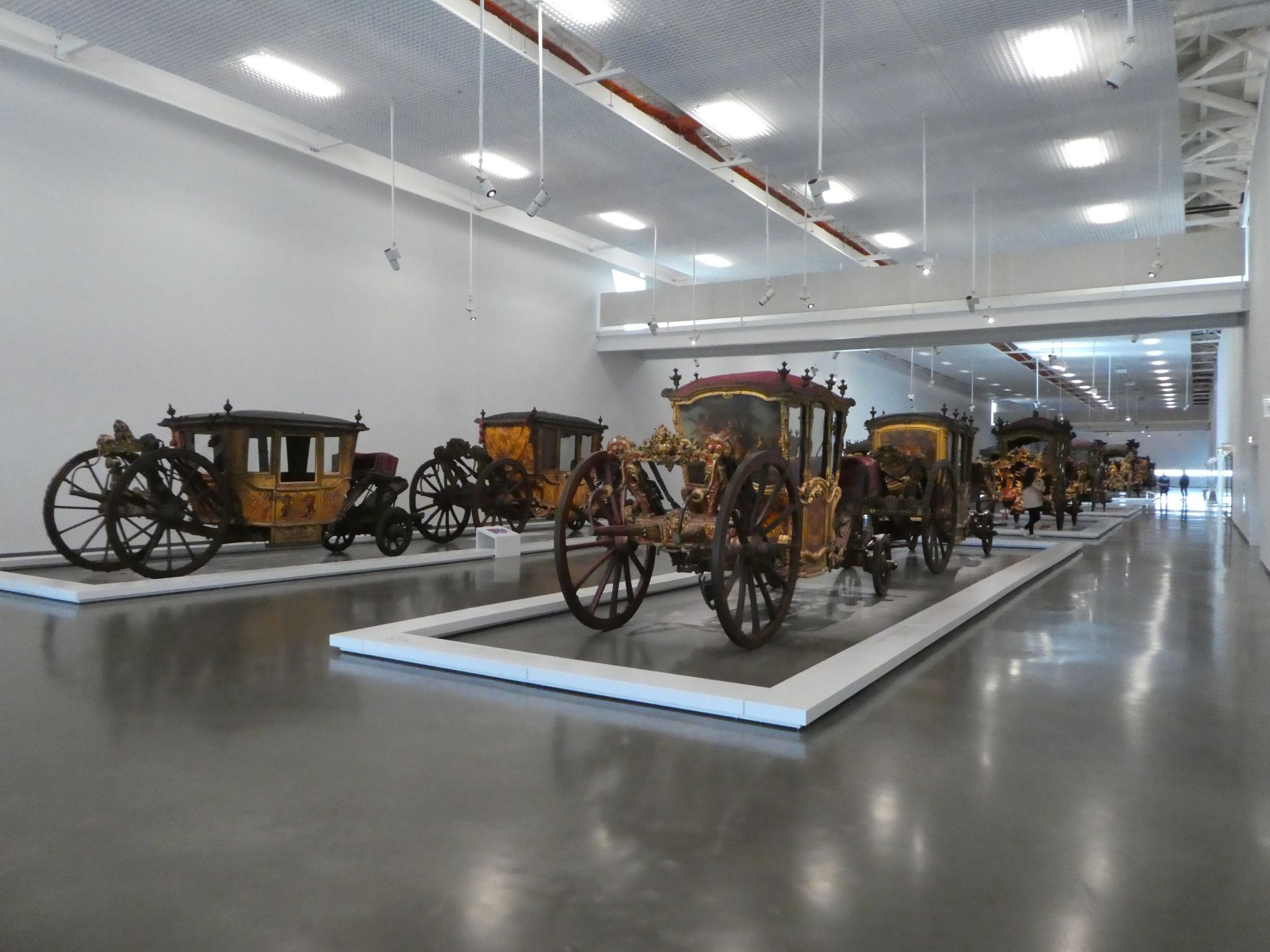 The Maritime Museum has a painstakingly restored collection of royal barques.  Some of these beauties needed a rowing crew of 80 men.  Not helpful when the king has a spontaneous urge to go for a spin around the harbour. 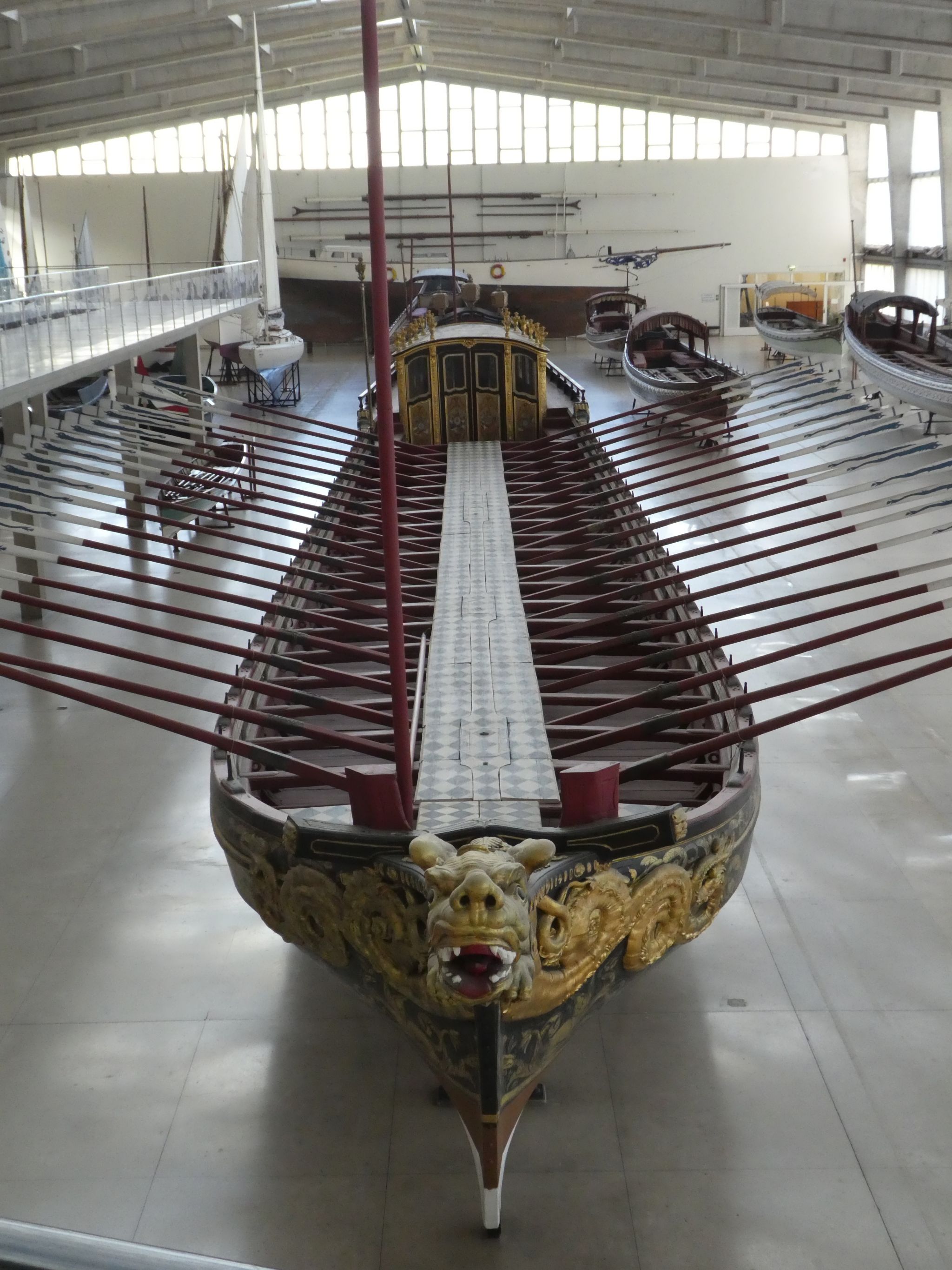 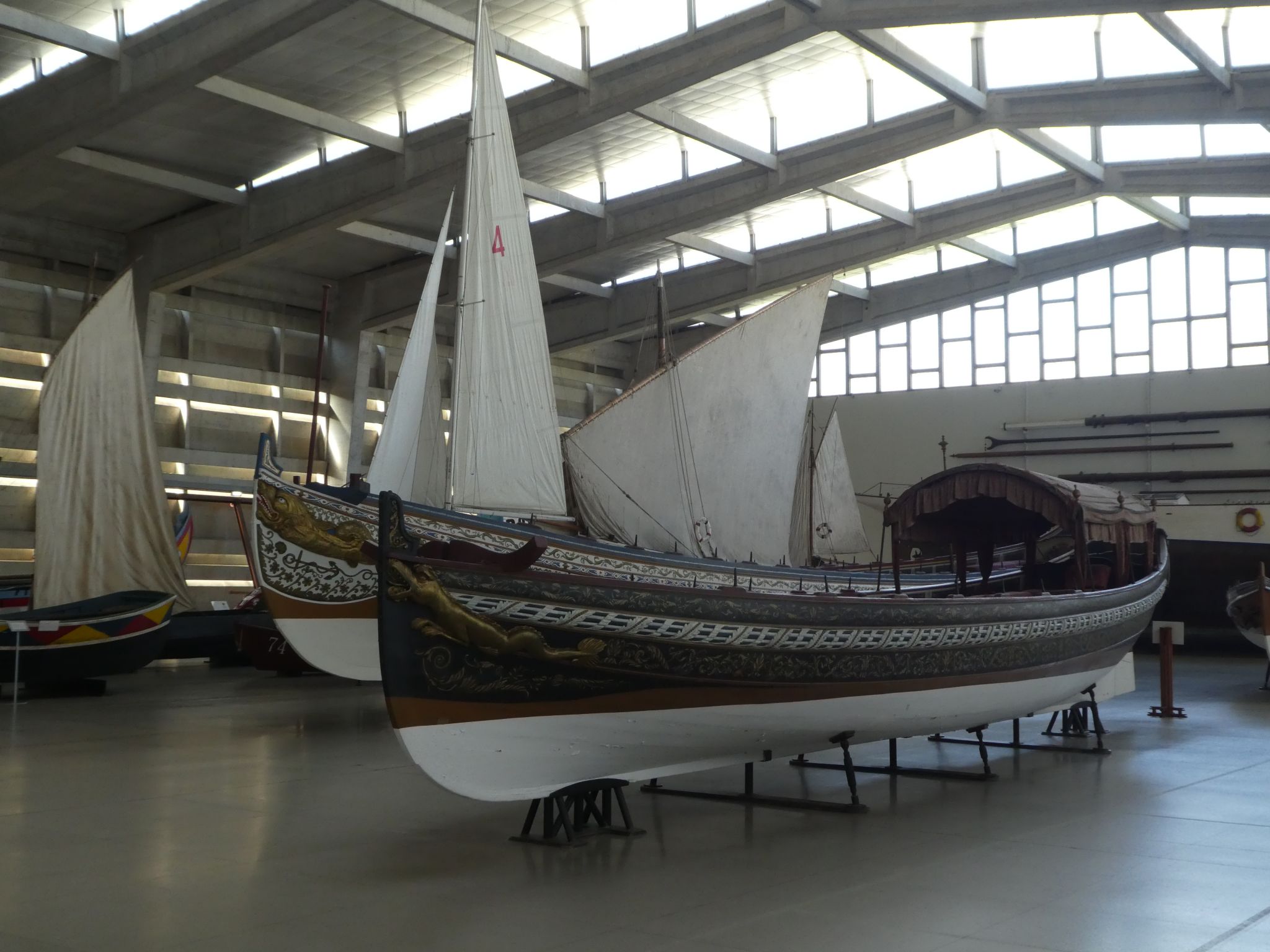 For a distinctively Portuguese experience, there is the Museu National do Azulejo, ie the national tile museum. That’s right, an entire 16th century convent re-purposed as a museum celebrating the famous Portuguese azulejos.  It sounds like the ultimate in ‘boring’ but actually, somehow,  it was really compelling.  Especially the completely in-tact chapel bedecked throughout with classic azulejos. 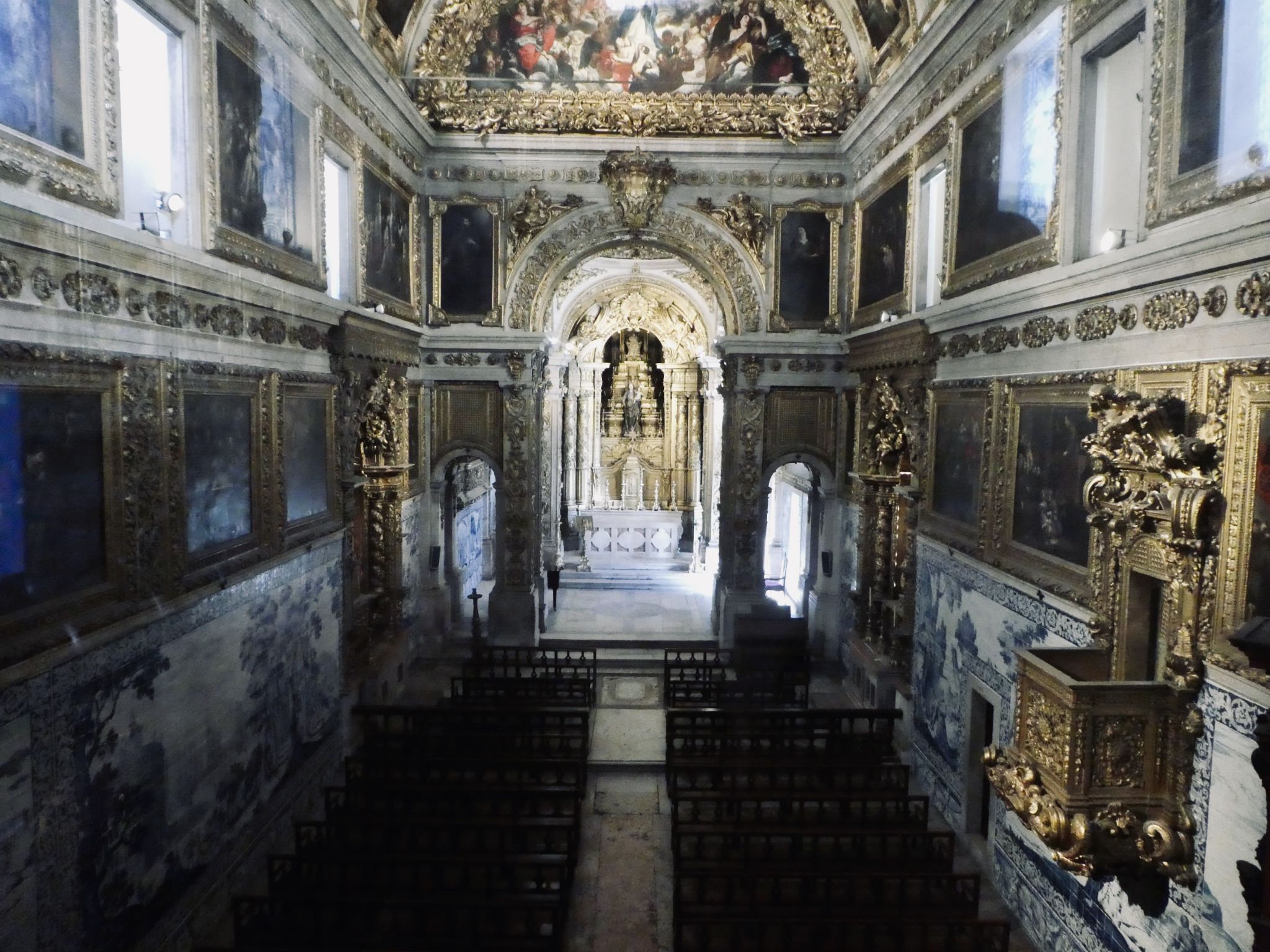 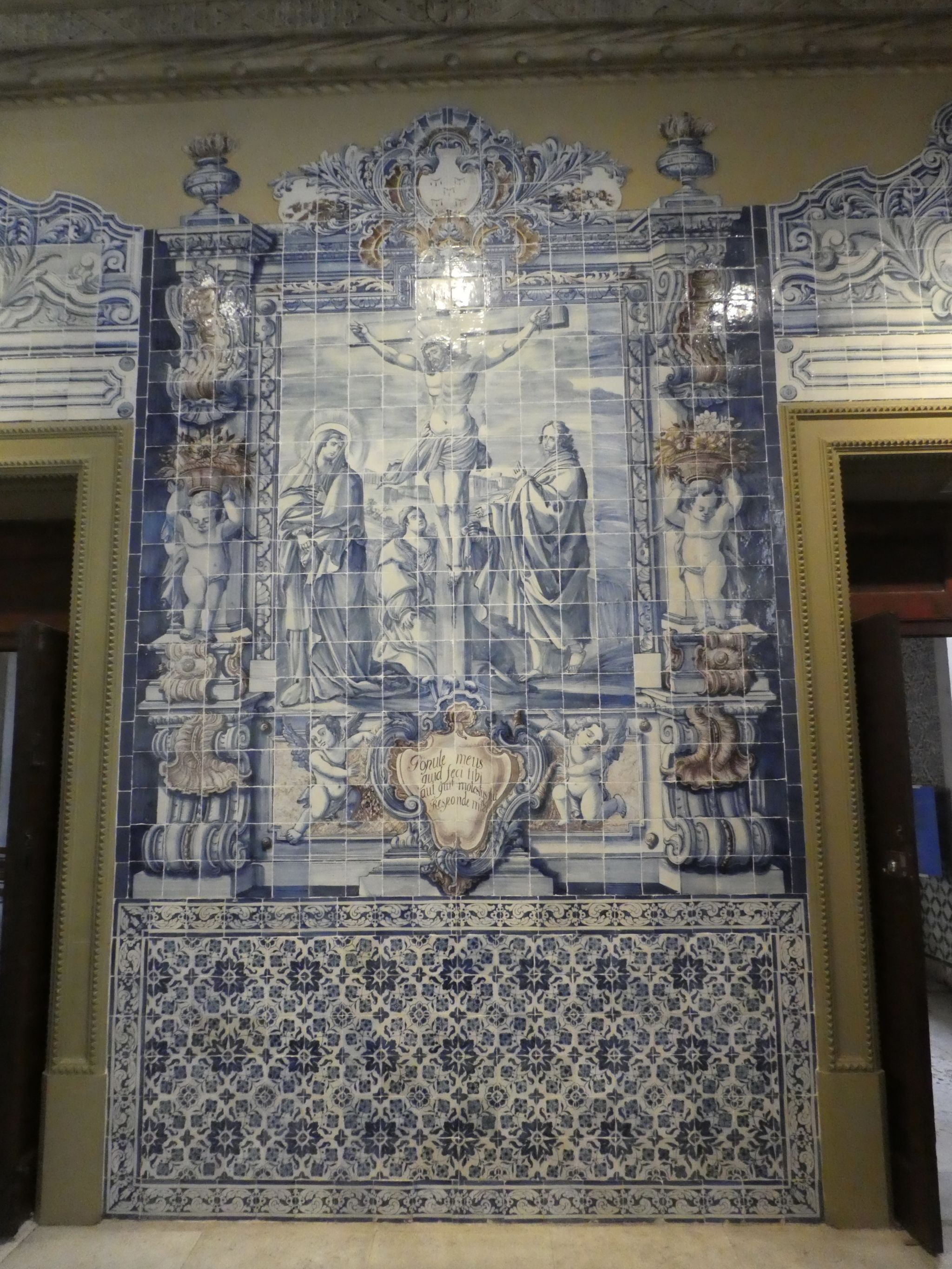 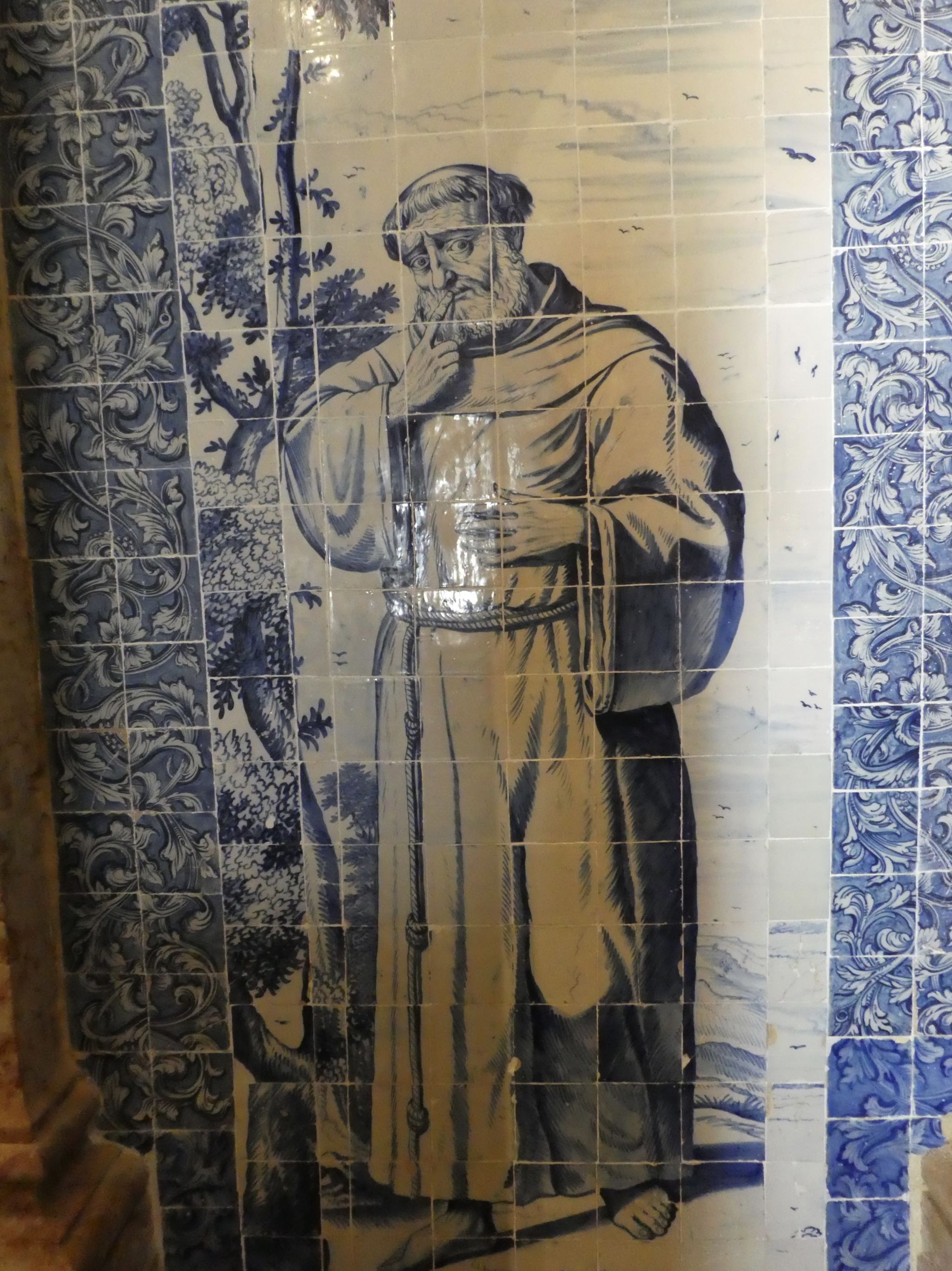 The Museum of the Resistence tells the story of the repression and human rights abuses of the Salazar years – Europe’s longest dictatorship – which ended in a bloodless coup in 1974.  We also visited one of Europe’s largest private collections of watches and clocks, and the money museum – both excellent.

We ran out of time for the tram museum, the marionette museum, the telegraph museum…. So many museums, so little time!

We could have spent days more here, but we’d arranged a walk on the Fishermen’s Trail on the south coast of Portugal.  Time to pull the hiking books back on.