When Prince Ferdinand of Saxe Coburg-Gotha arrived in Portugal in the 1830s to marry Queen Maria II of Portugal, Sintra was the royal capital.   But Ferdinand wasn’t satisfied with the traditionally-styled white palace in town.  He commissioned Baron Ludwig von Eschwege to build them a modest summer house.

Von Eschwege was a curious choice – a Prussian engineer whose previous work was mostly designing mines in Brazil.  And with all three of them heavily involved in the detail of the palace, maybe the outcome was always going to be a bit wacky.  Certainly the ‘modest’ part of the brief got discarded quite early. 15 years later, on a mountain top outside Sintra, the Palacio National de Pena was complete.  It’s truly unique. 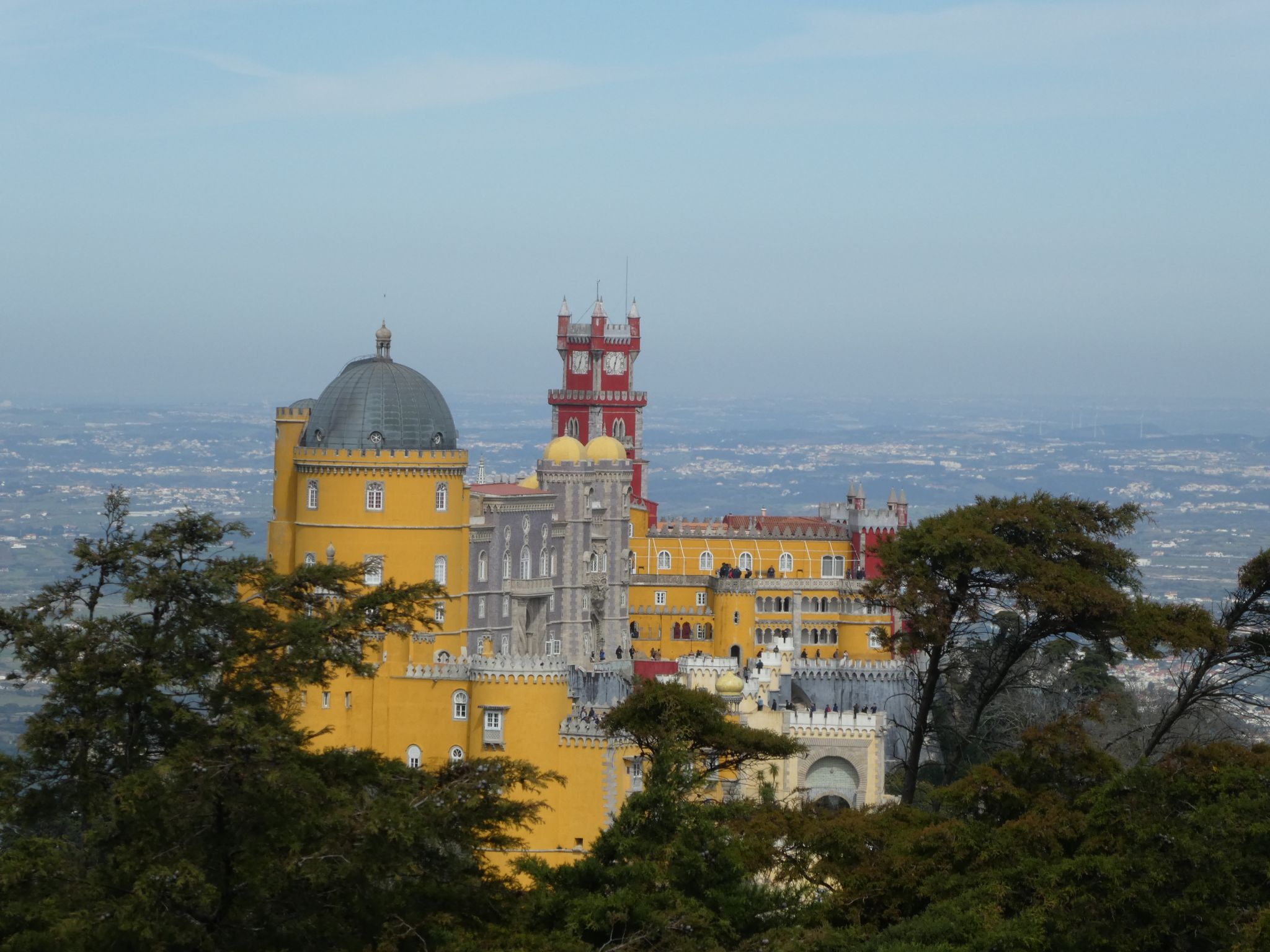 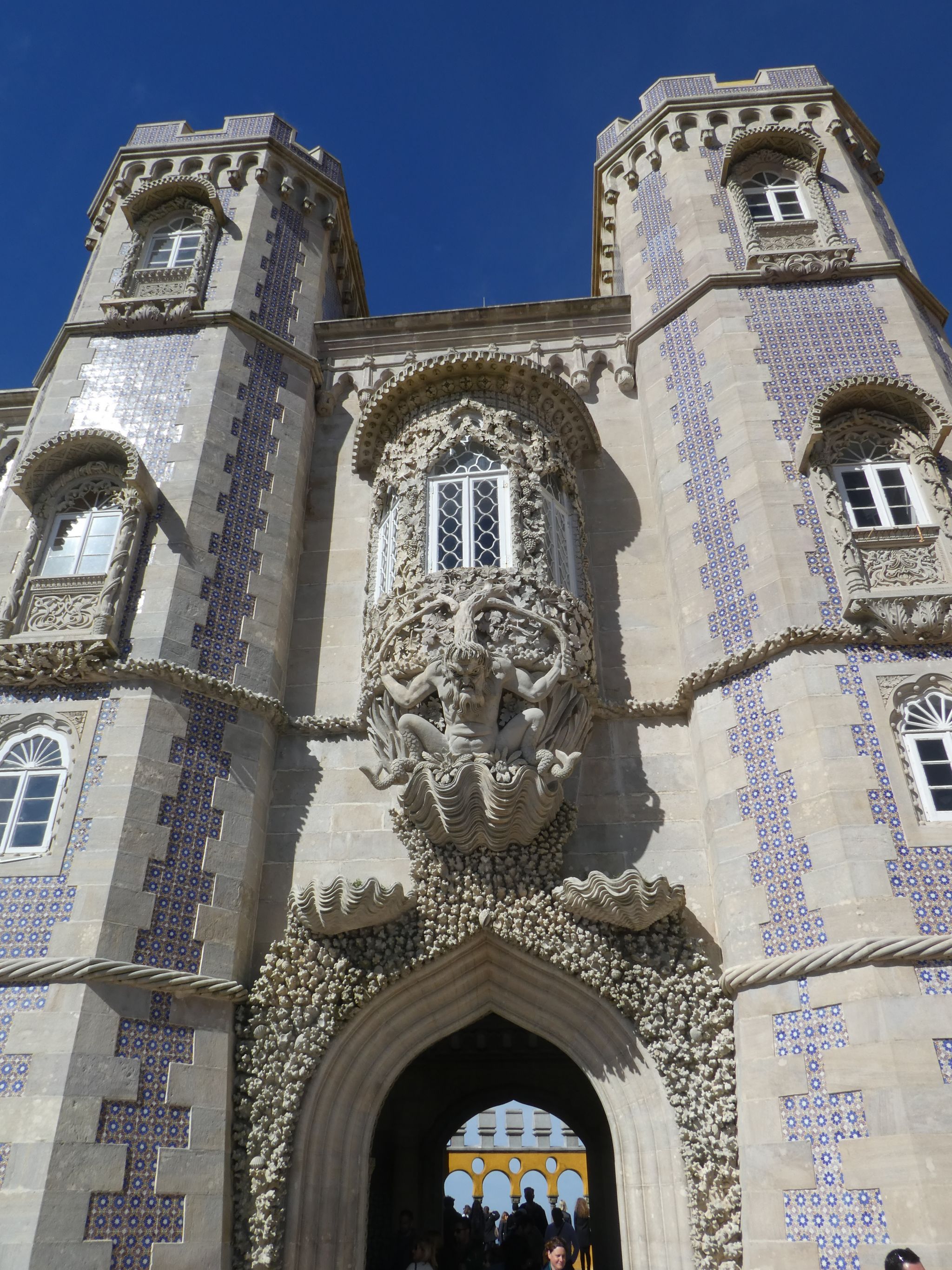 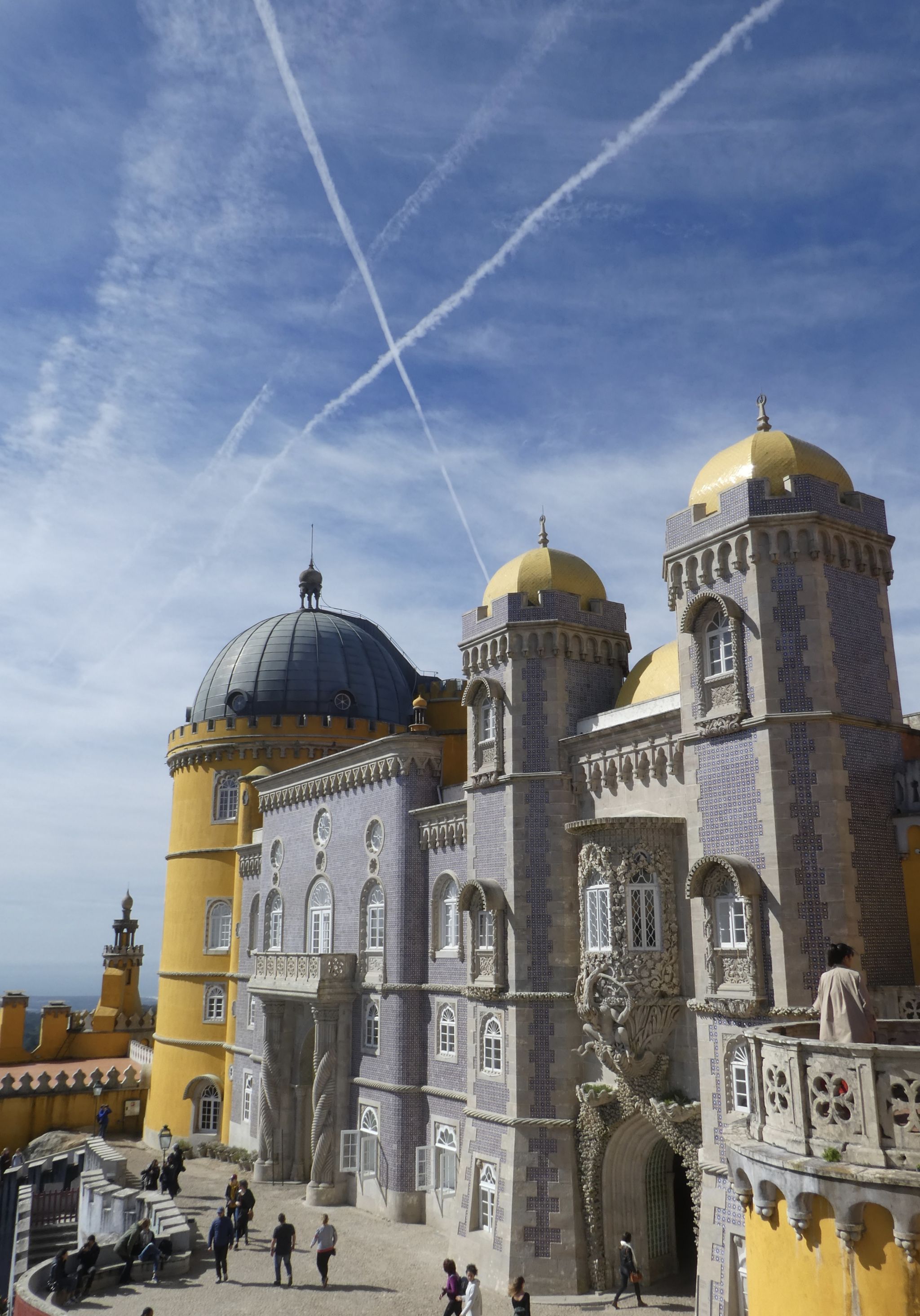 From the top of the palace there are 360 degree views taking in Lisbon and the coast.

Paths through the 200 hectares of the palace estate wind through ancient forest, planned gardens, camellia groves and artificial lakes.  Even the swans and ducks have their own little castles. 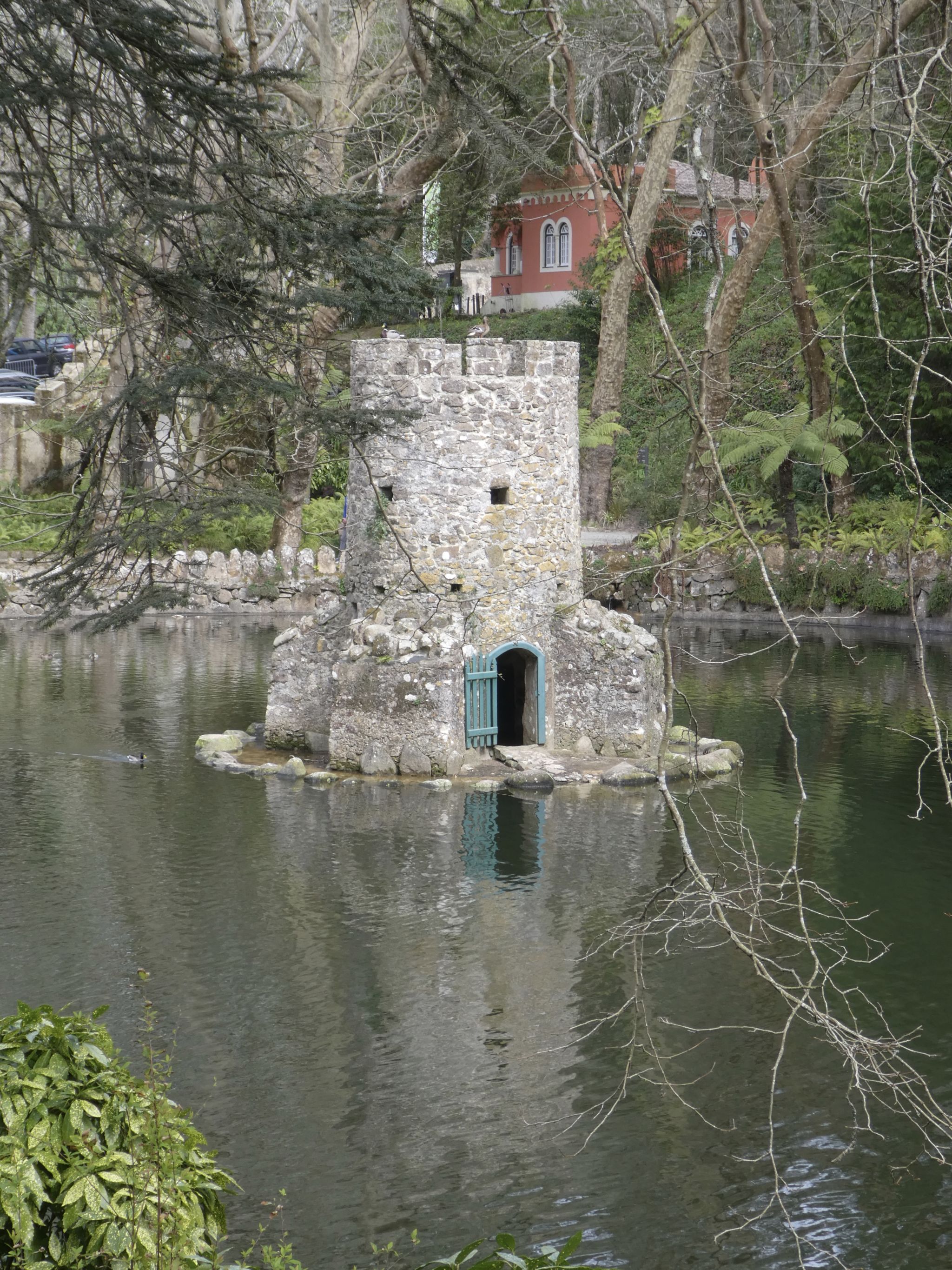 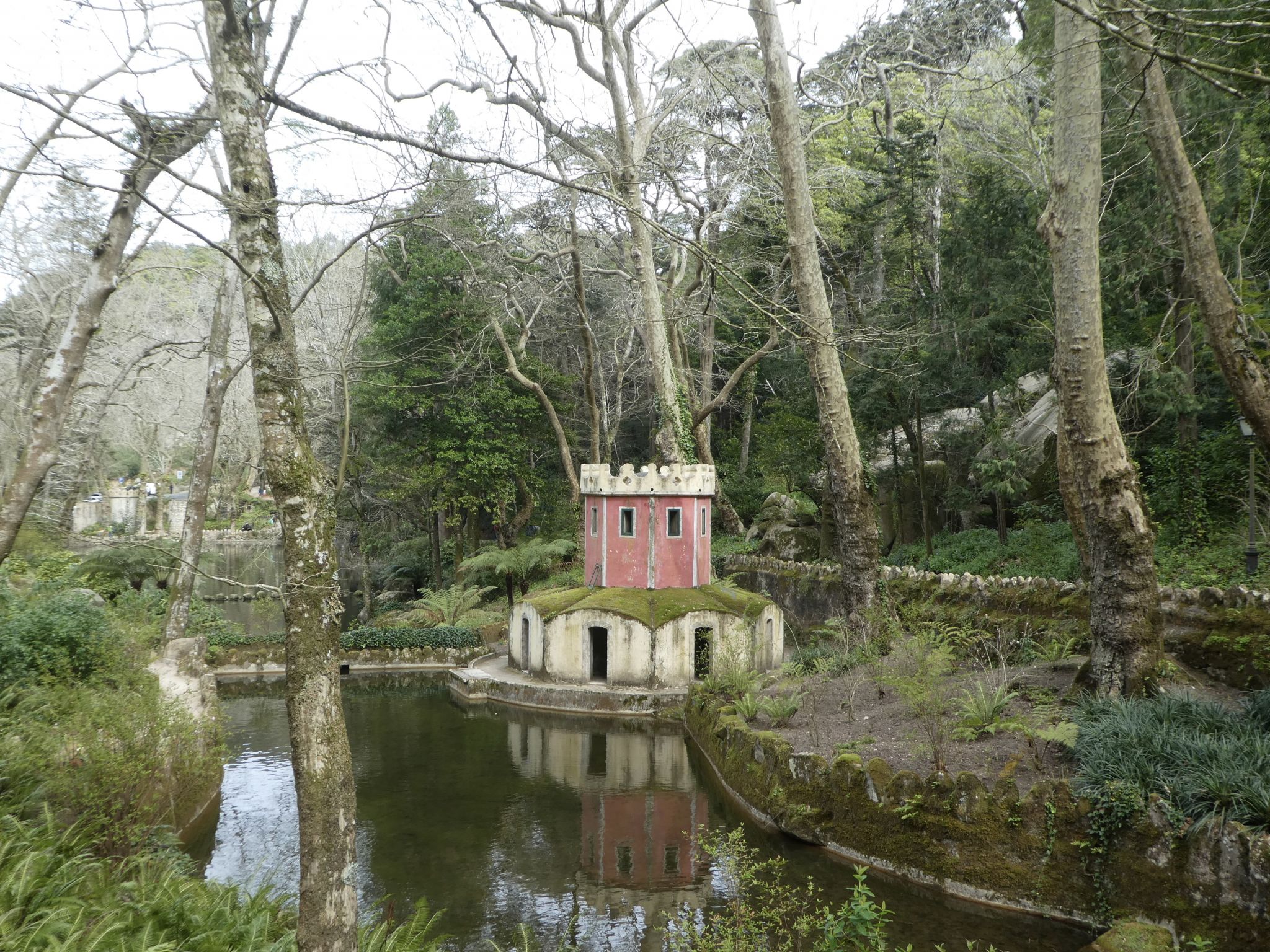 Exiting the palace grounds, further along the ridge are the restored remnants of a 10th century Moorish castle. 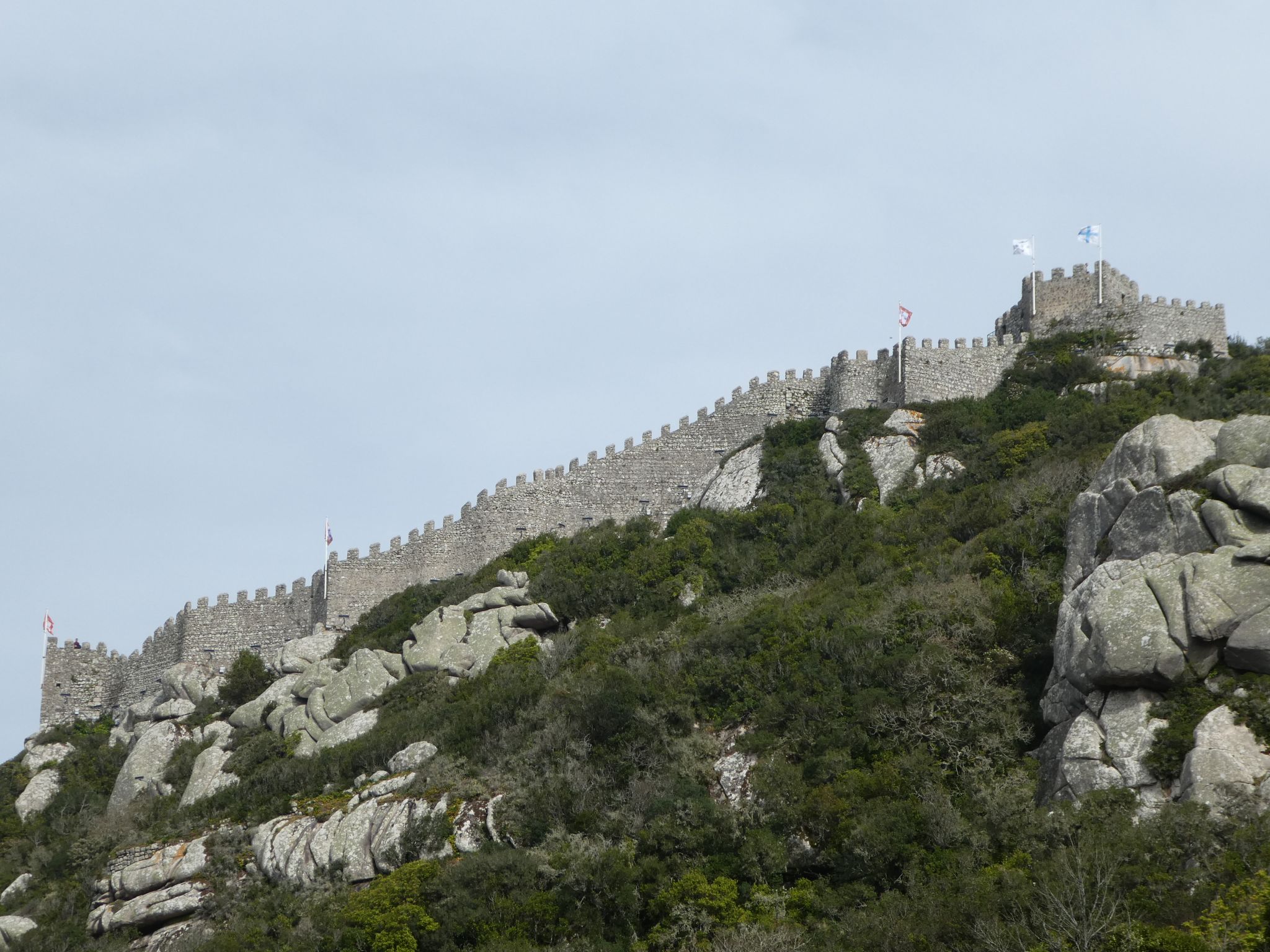 The road from the town to the mountain top climbs through dense forest, passing exquisite villas dating from a time when Sintra attracted the cream of Portuguese society.  Not much has changed since Hans Christian Andersen visited in 1866 and wrote “all the way to the serra [mountain top] is a garden, a wonderful combination of nature and art, being the most beautiful ride imaginable”.   In fact, Sintra is still the most expensive municipality in Portugal in which to own property.

There’s also a steeper, more direct 2km walking trail from the town up through the forest to the palace and castle.  You could walk both ways, or you could be canny and catch the bus up, see the two sites, then walk back down the trail.  That way you are not too puffed to enjoy the gorgeous villas. 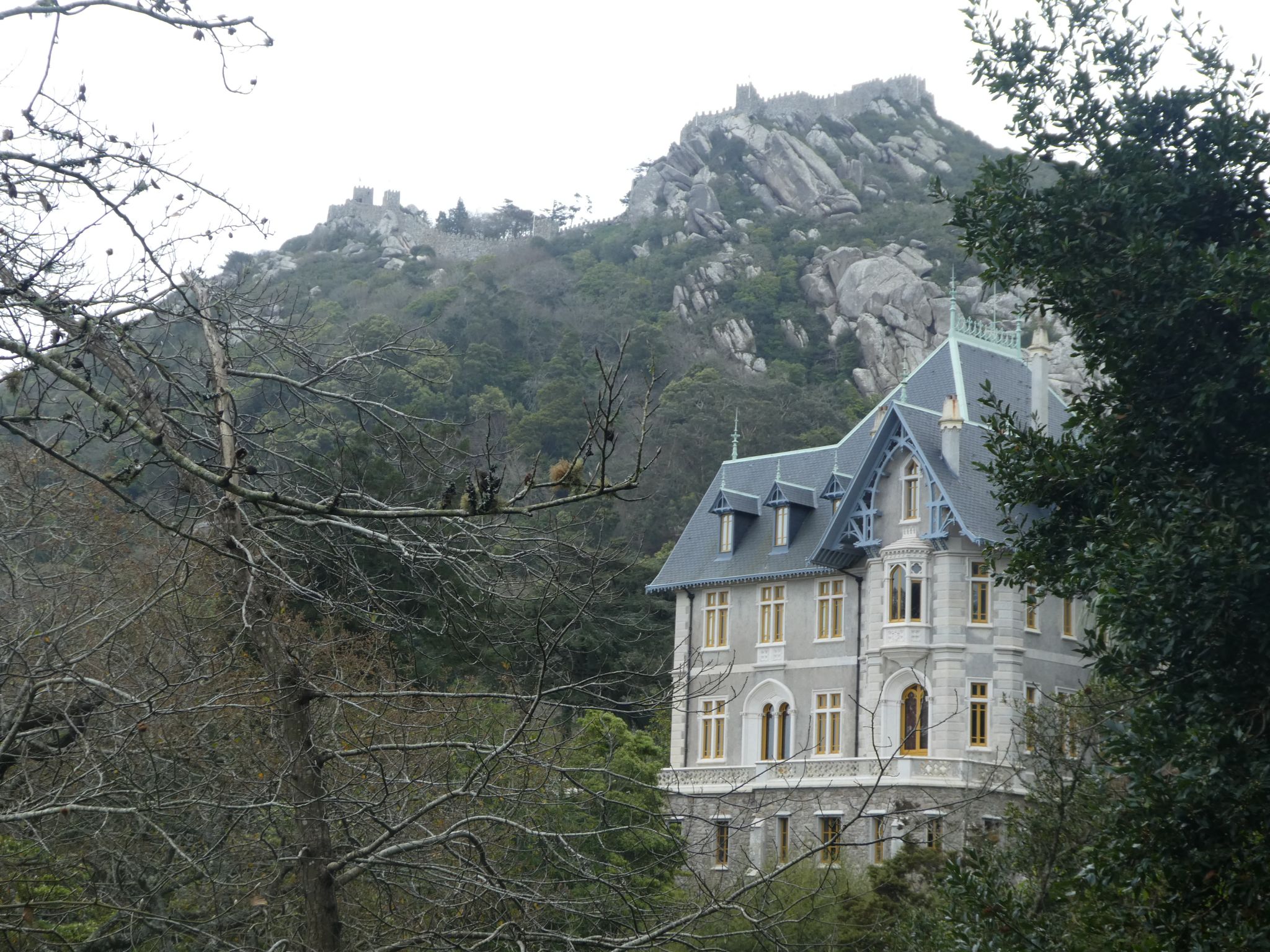 The prize for most ostentatious display of wealth undoubtedly goes to the Quinta da Regaleira, the estate of Antonio Carvalho Monteiro who made a fortune in the Brazilian coffee trade in the late 1800s. New money, old money – who cares when you can build a house that rivals the royal residence.  Here’s his five-storey neo-gothic house and private chapel.  A little excessive for a single man, one might think. 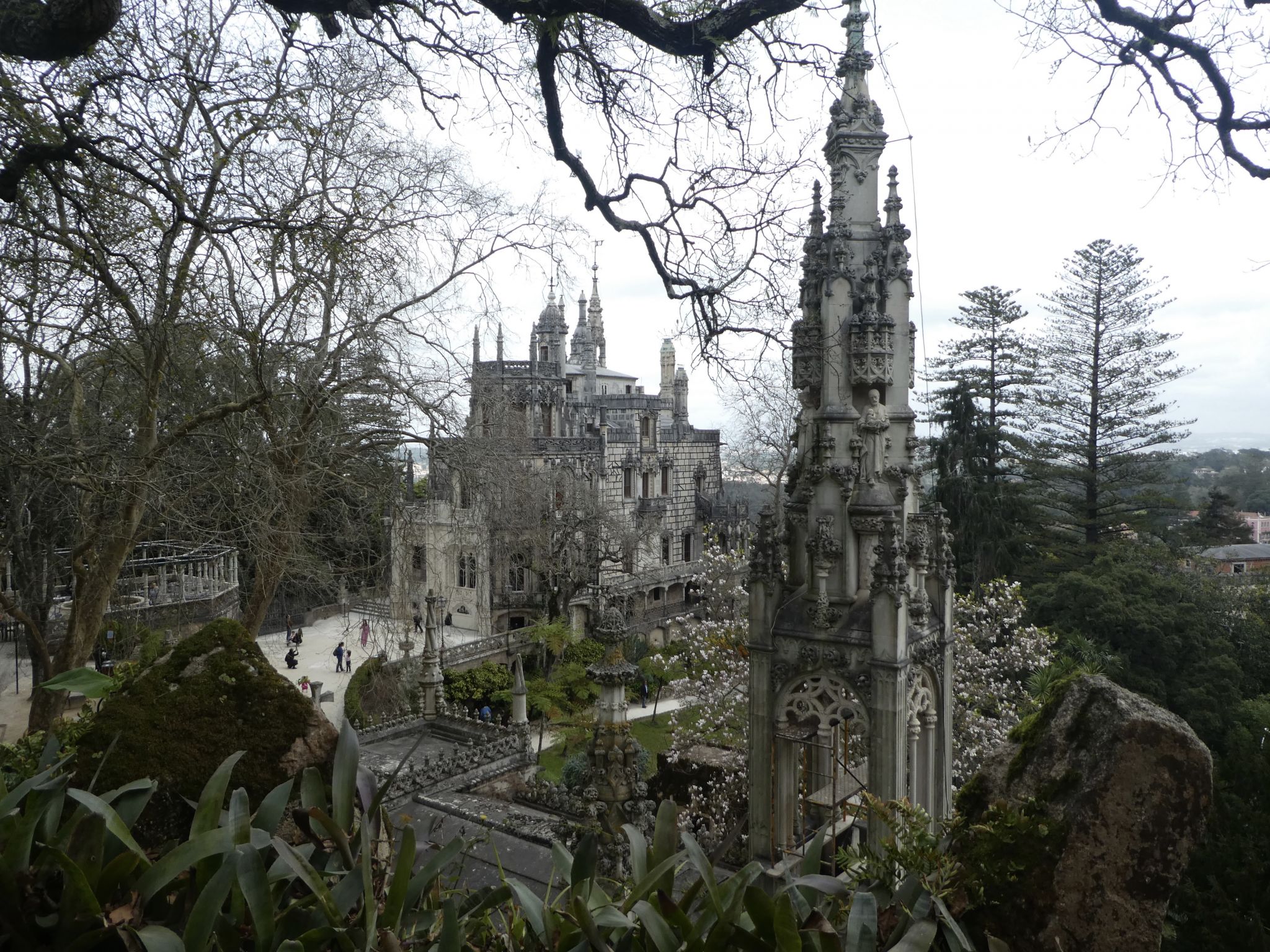 The 4 hectares of gardens are home to all manner of odd structures reflecting Monteiro’s interest in alchemy, Masonry, the Knights Templar and other more obscure and secretive ideologies.

We were particularly intrigued by the ‘Initiation Wells’.  These were not wells in the traditional sense, rather more like underground towers.  The first contains a 27 metre spiral staircase from ground level down, with tunnels at the bottom leading to an almost-underground waterfall and to the other deliberately ‘unfinished’ well.  The wells are said to have been built for Tarot initiation rites with the number of steps, spacing and other features linked to Tarot mysticism. 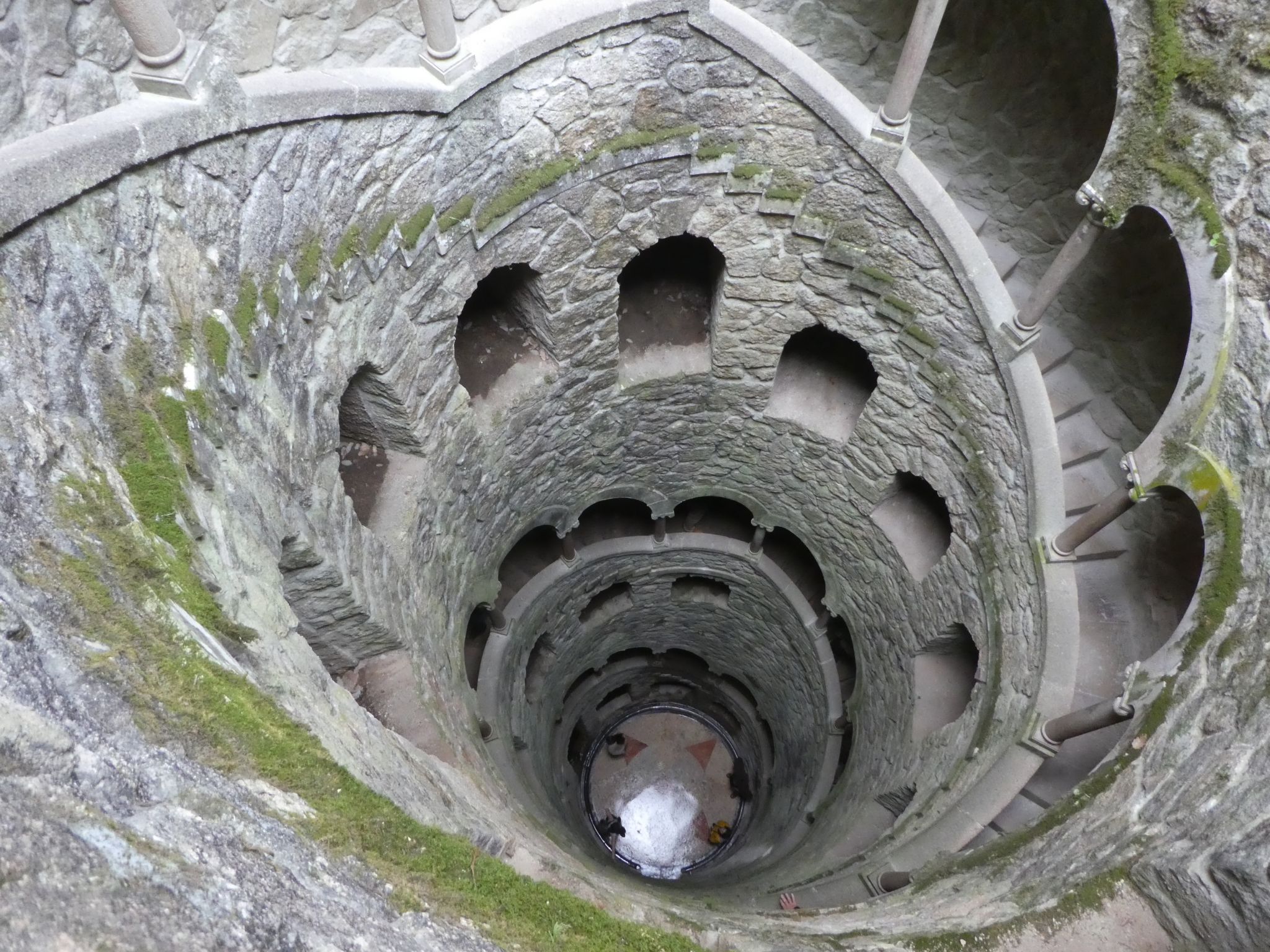 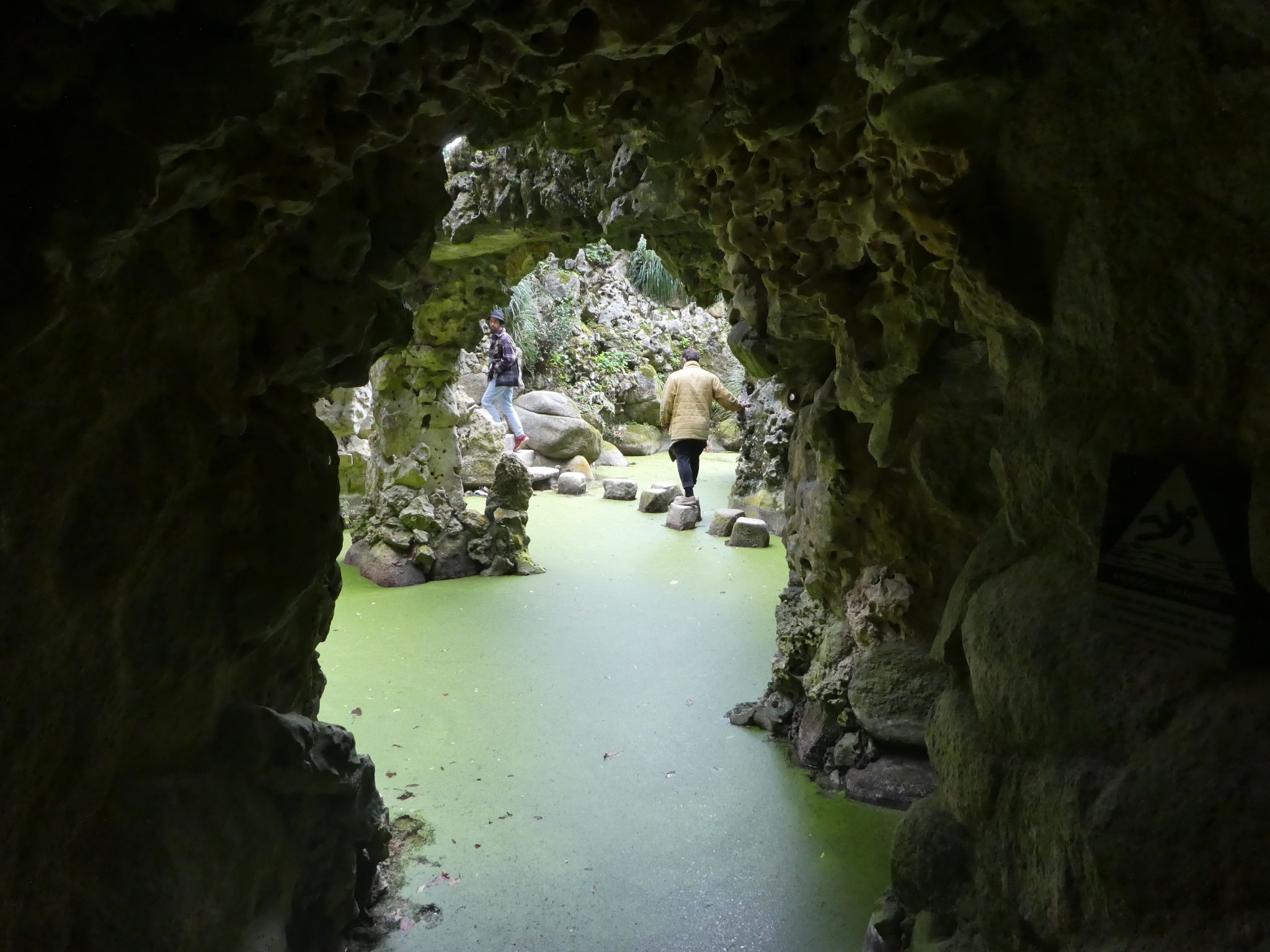 Back in town, remember the staid white palace from which Ferdinand wanted to escape?  The Palacio National de Sintra is still there.  Yes, compared to the Pena Palace, it is a bit boring, isn’t it. 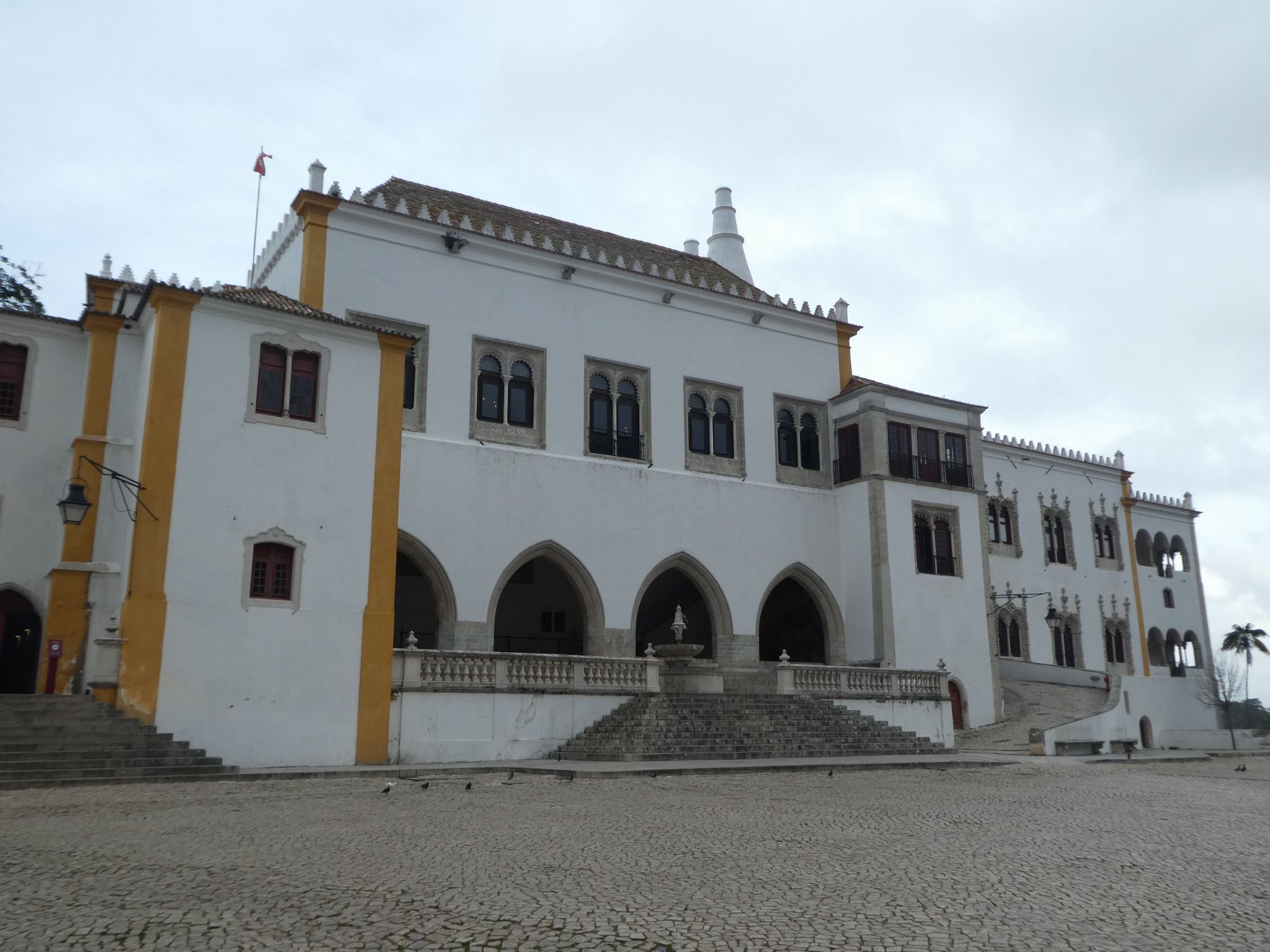 But inside there are a few quirky things to see.  A much earlier monarch, King João I found himself in trouble with the Queen after her ladies-in-waiting reported seeing him kissing one of their number.  He managed to convince the Queen it was all platonic, but in a not-so-subtle dig at his adversaries, had the ceiling of one room painted with magpies – one for each of the gossiping ladies-in-waiting. 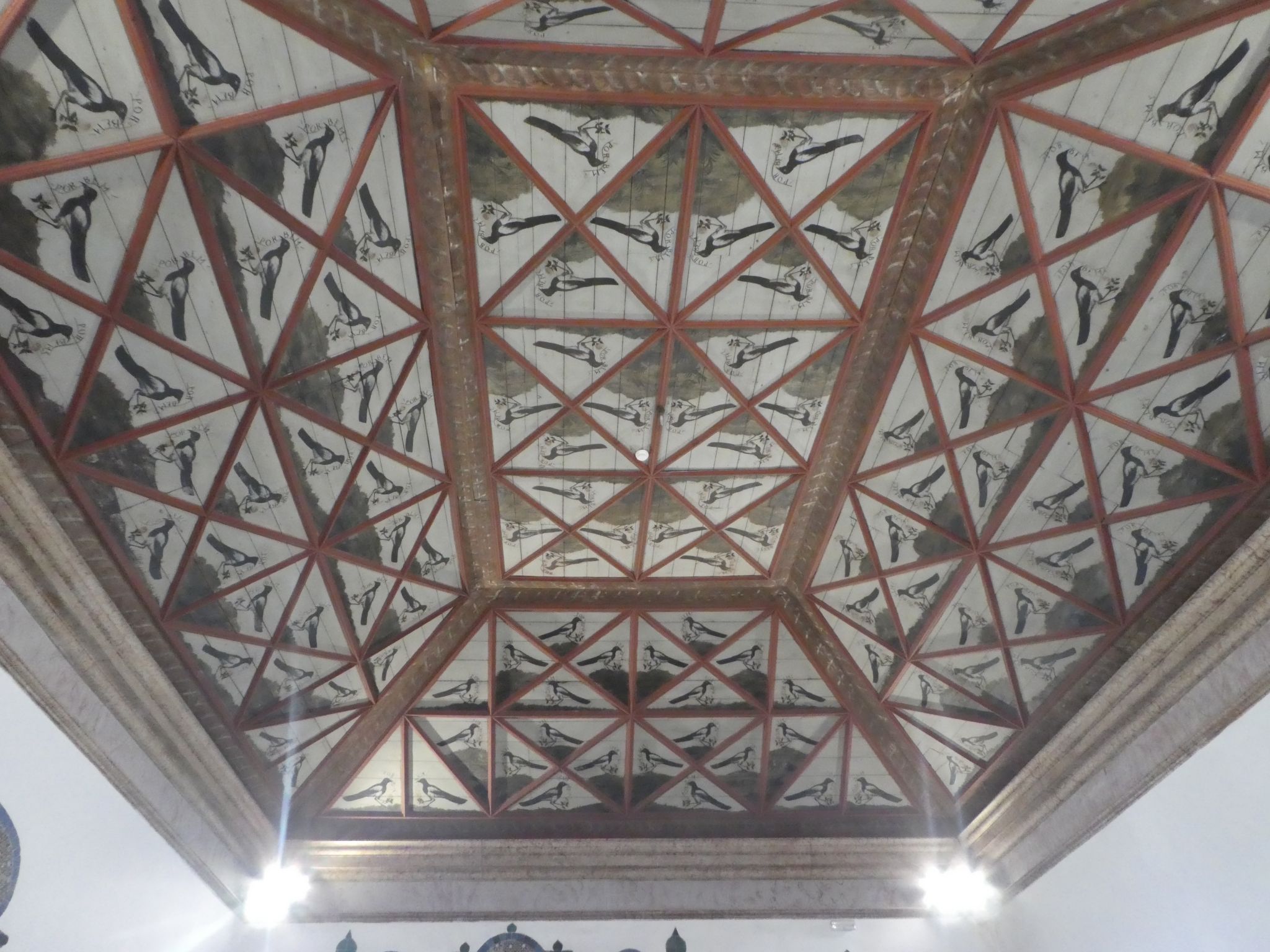 The ceiling of another room is adorned with 27 swans each with a gold crown around its neck.  The symbolism of this wasn’t clear to us – the burden of wealth and privilege maybe? 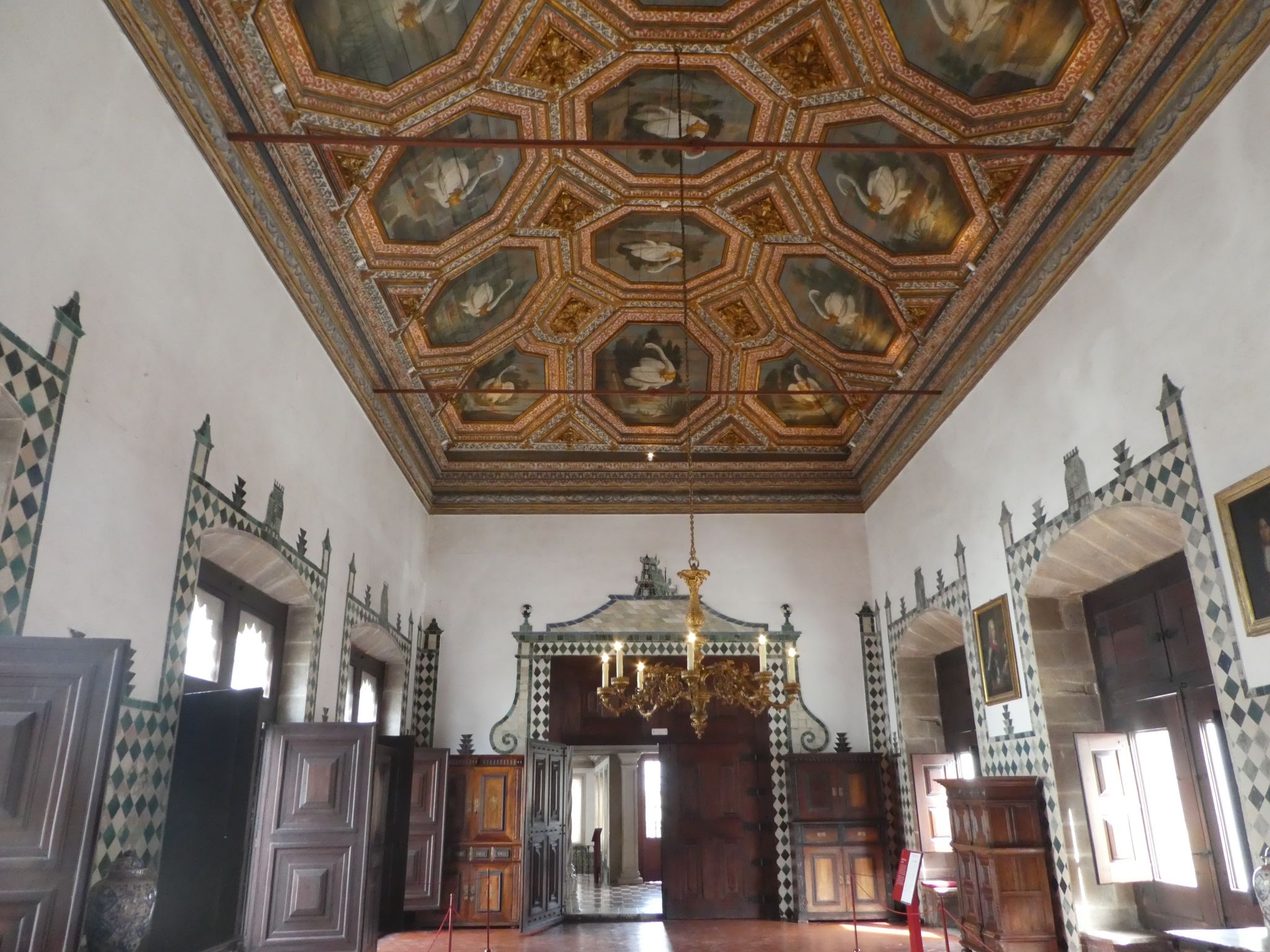 Sintra is just an hour by train from Lisbon.  A lot of visitors come as a day trip, but a day is not enough to see it all.  The major sites are quite spread out, the Pena Palace and grounds deserve at least a couple of hours, and the walk up or down the mountain is worthwhile.  The town of Sintra itself has some points of interest of its own, including a newish News Museum charting the history of news and its role in influencing history and politics.  There are some lovely places to stay and some good restaurants.  It’s worth more than a whistle stop.