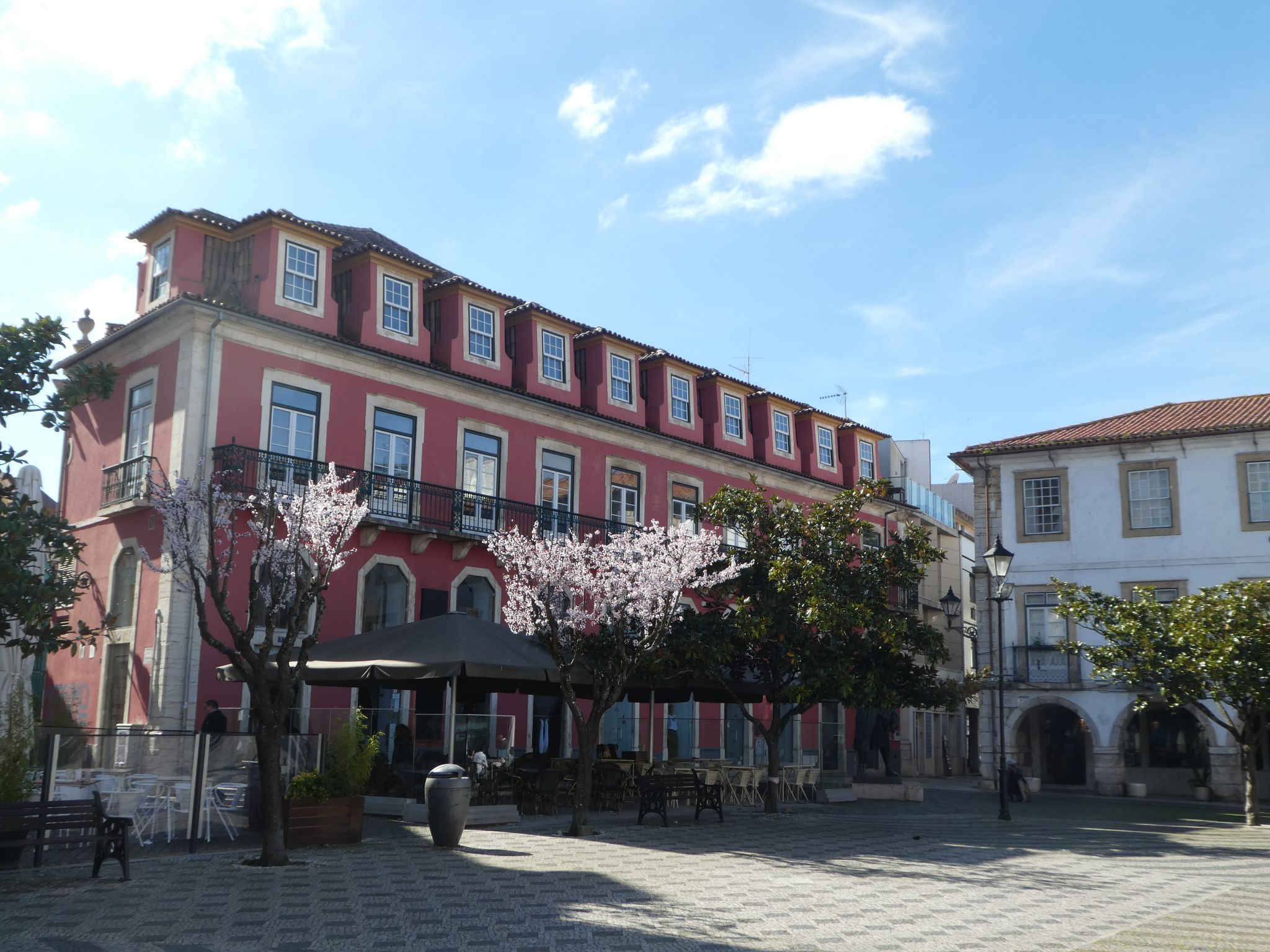 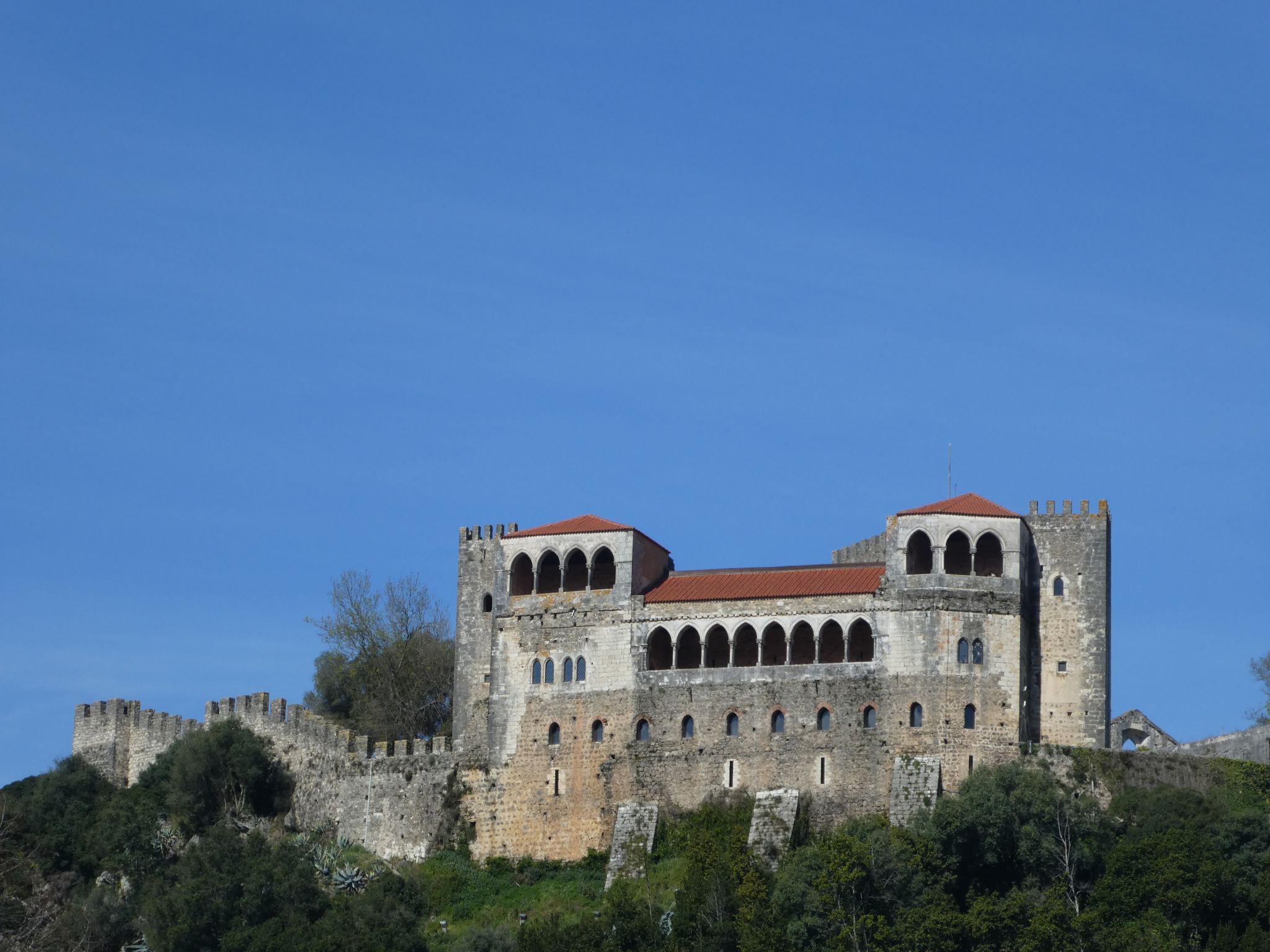 But it’s real attraction is as a base to visit three unique religious sites nearby.

In 1385  King João I of Portugal got word that King Juan I of Castile was coming to contest his throne.  João prayed to the Virgin Mary, promising to build a monastery if Juan was successfully repelled.  When the two forces met in the Battle of Aljubarrota, 6,500 Portuguese fighters, supported by a few hundred English, defeated Juan’s army of 30,000.

Divine intervention?  Home ground advantage?  Better fighters?  Who knows.  But João made good on his promise and two years later work began on the monastery.  The Virgin had to be patient though.  It took 100 years, 15 architects and the reign of seven kings to reach completion.  And even so, there remain to this day the Unfinished Chapels.

The result is one of the best and few remaining original examples of Gothic architecture in Portugal.  Although given the work went on for a century, there’s a few other styles in there as well. 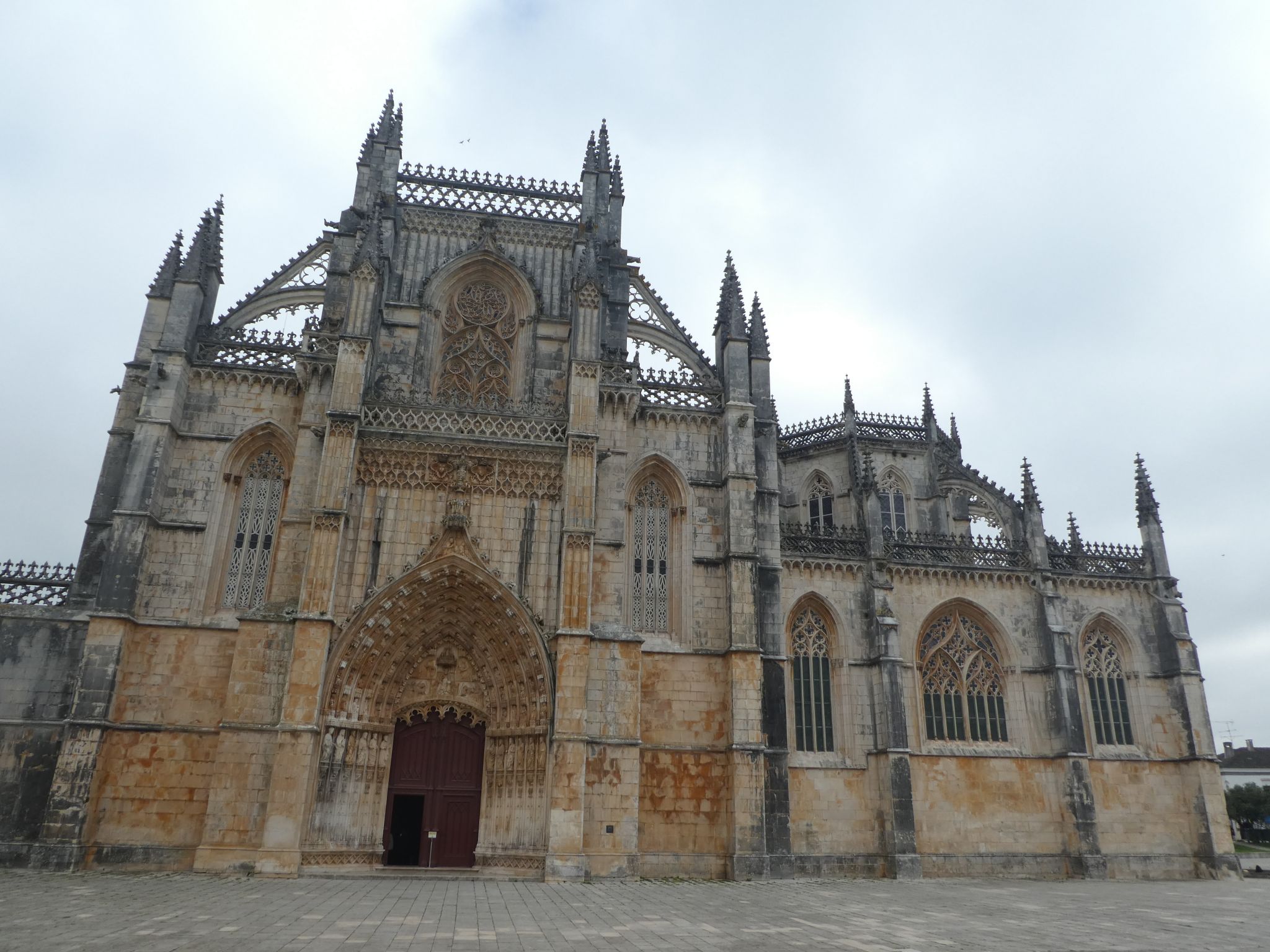 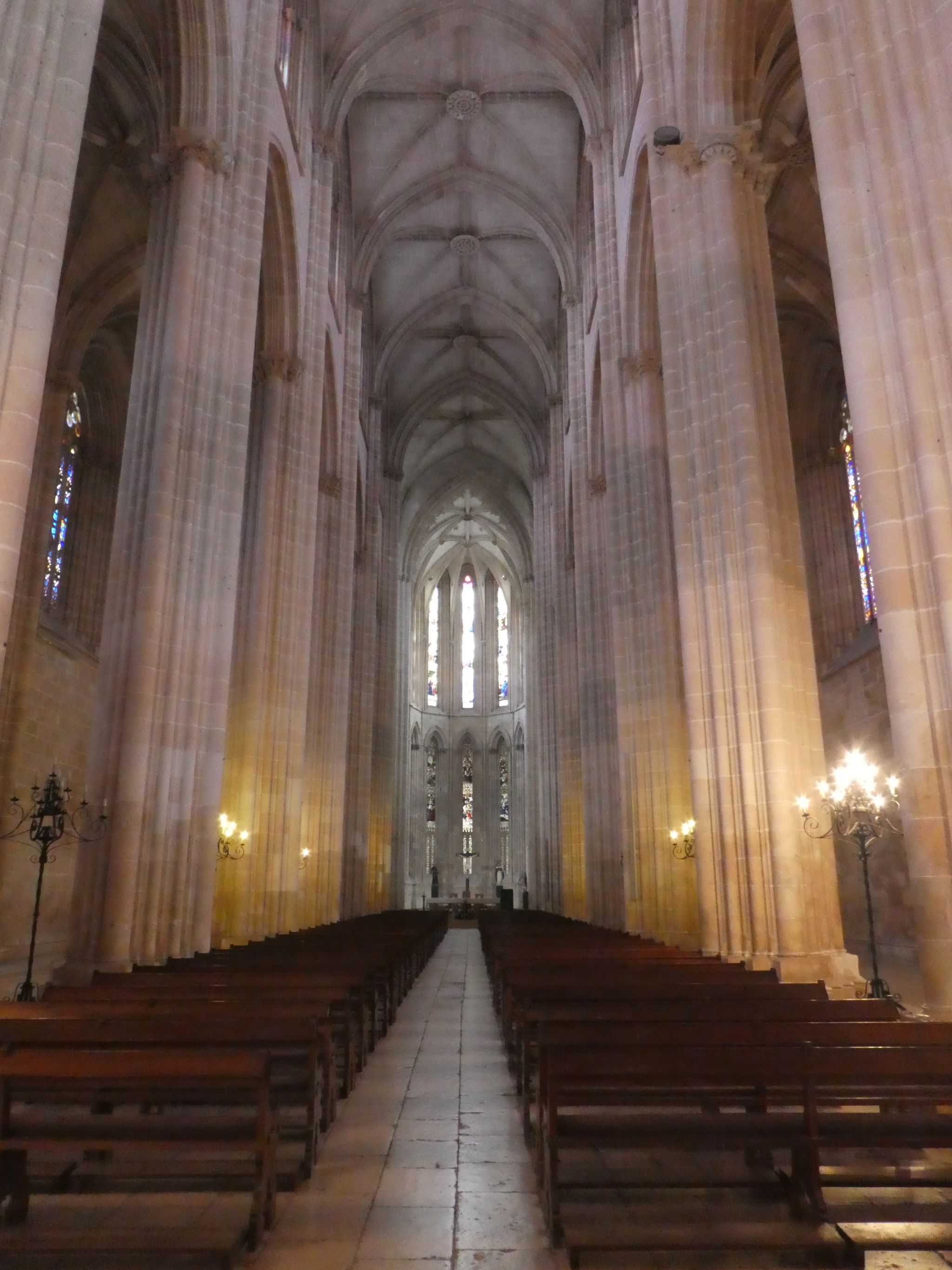 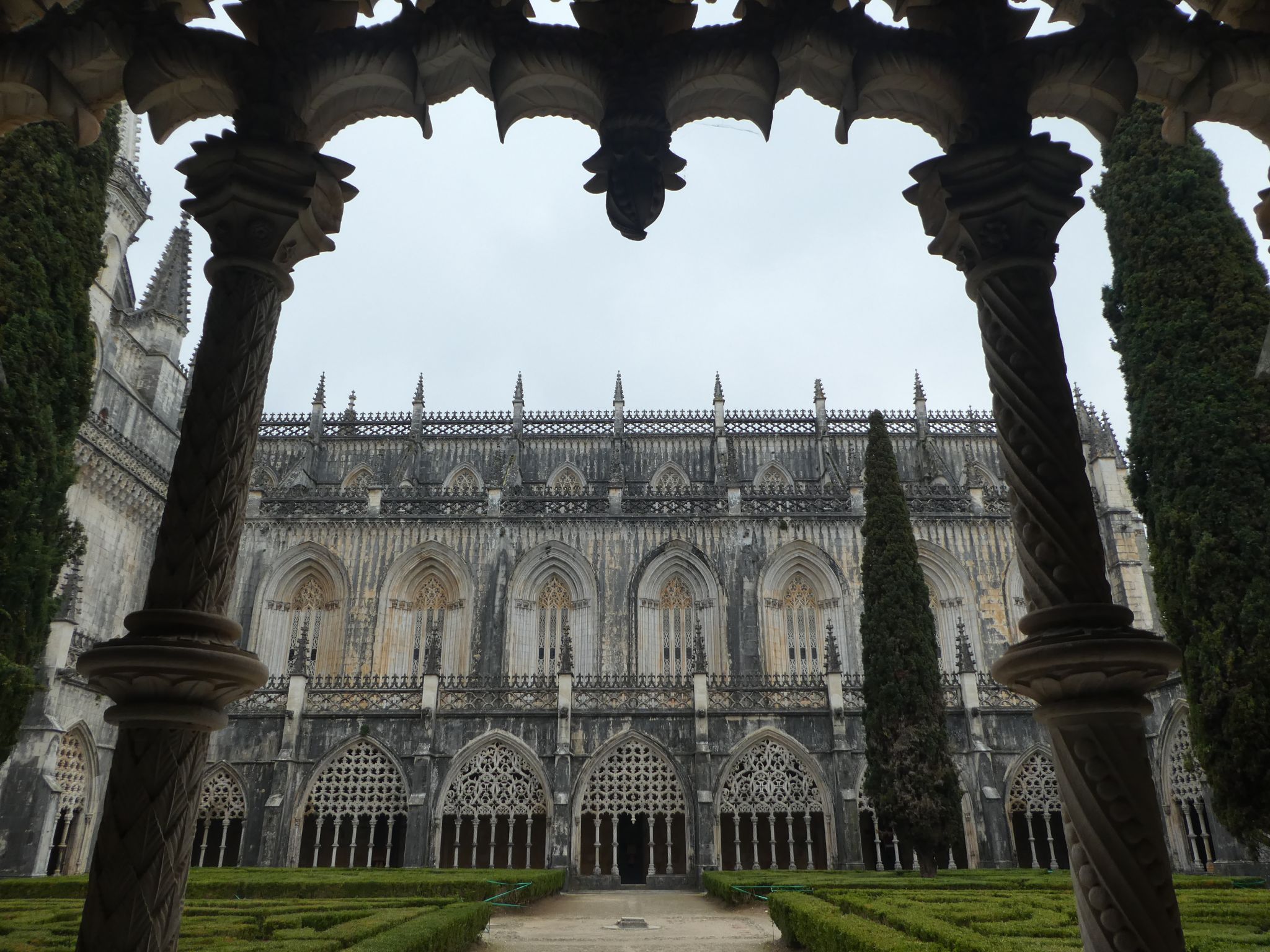 The church contains Portugal’s first royal pantheon.  King João I and his wife, Philippa of Lancaster are interred in a joint tomb under the central star-shaped vault.  The tombs of four of their sons and their spouses, two subsequent kings and a prince are in alcoves around the walls.

Statues of João and Philippa lie on top of their tomb, in full royal regalia, with hands clasped.  It looks like an ode to eternal love, but the symbolism is much less sentimental. 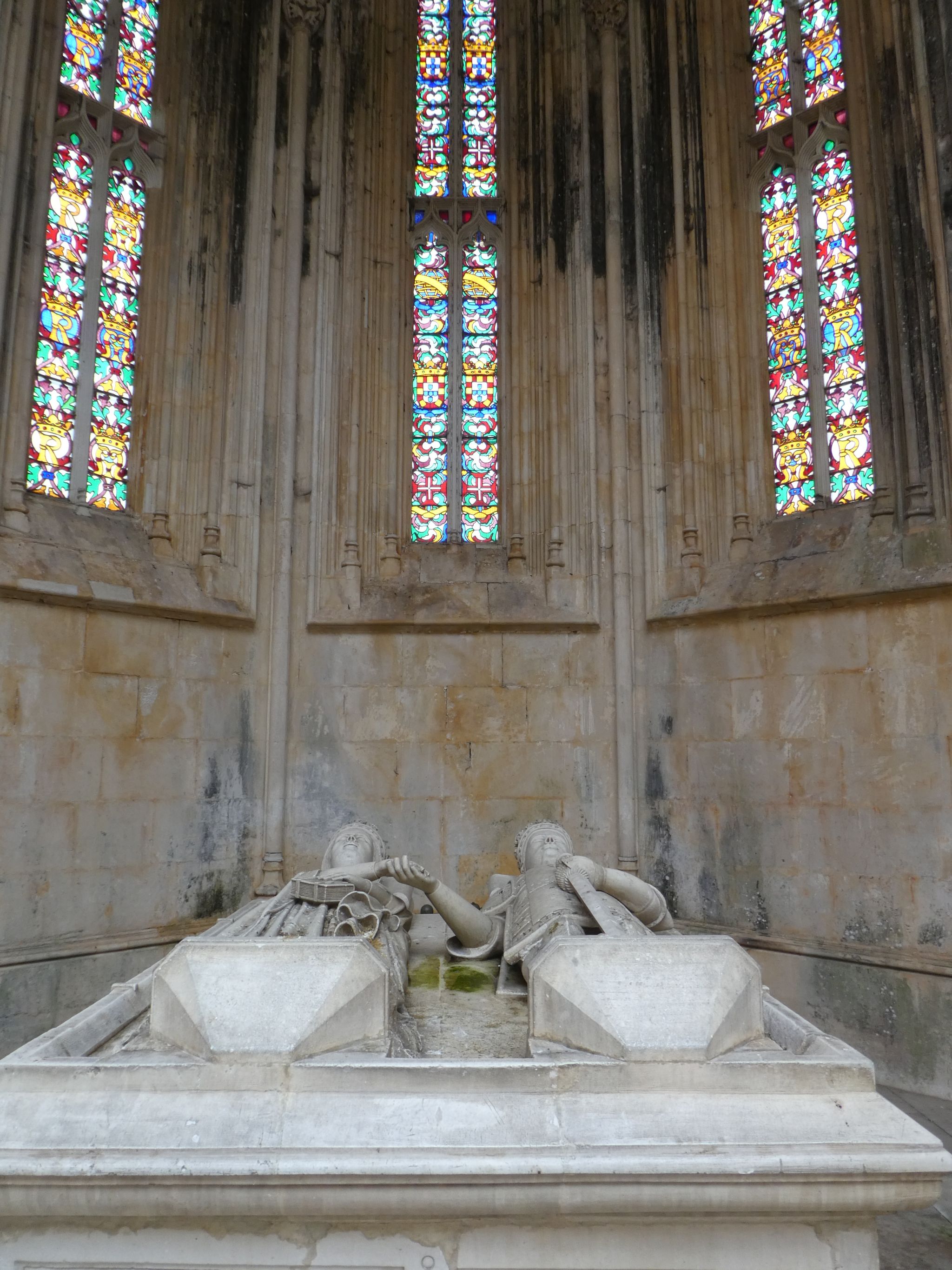 But actually it’s intended to represent the strong ties between Portugal and England forged by their marriage.  Ties so strong in fact that the Anglo-Portuguese Alliance, ratified as the Treaty of Windsor in 1386, just one year after the Battle of Aljubarrota, is still in force.  The oldest still-surviving political alliance in the world. 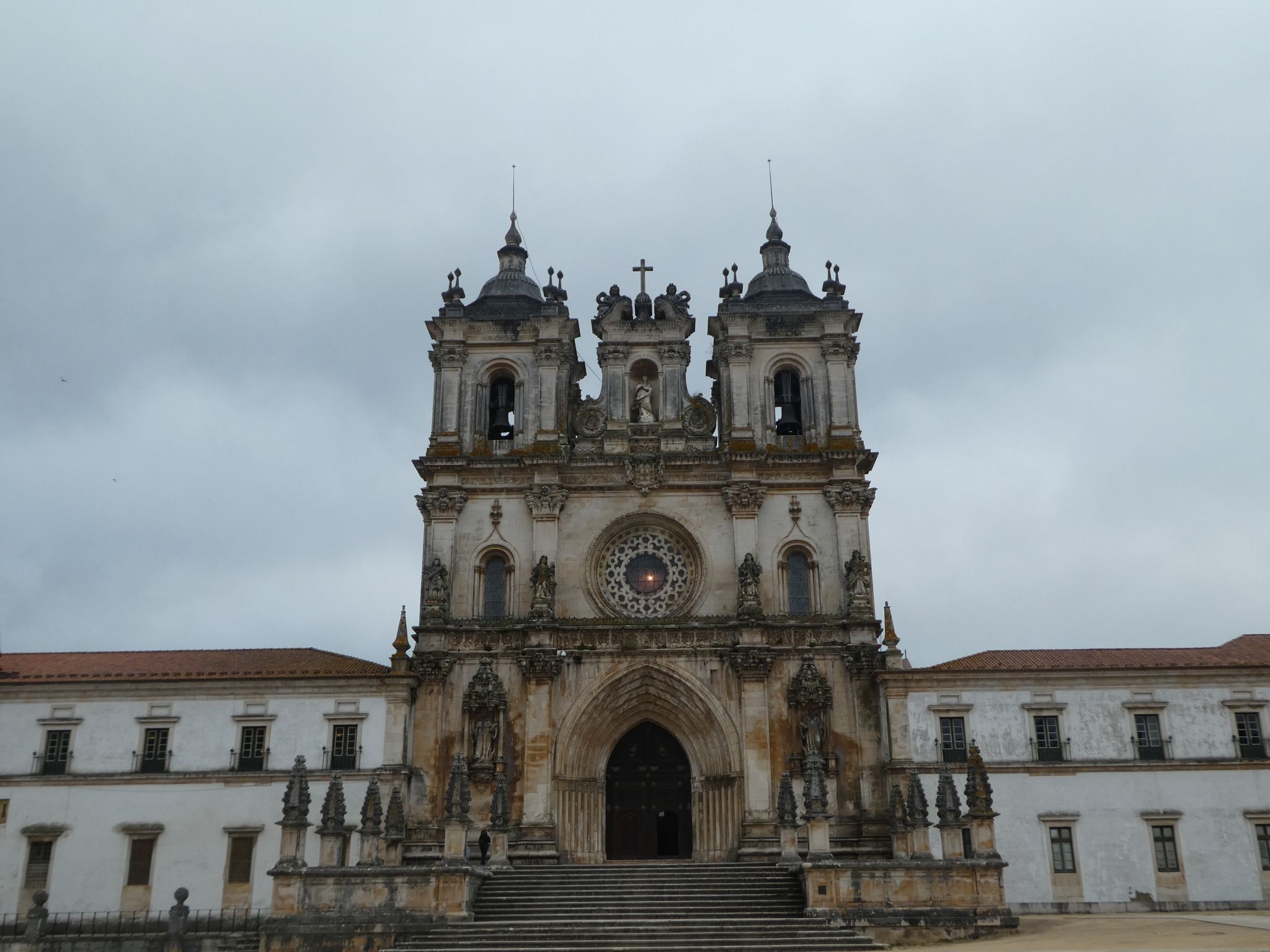 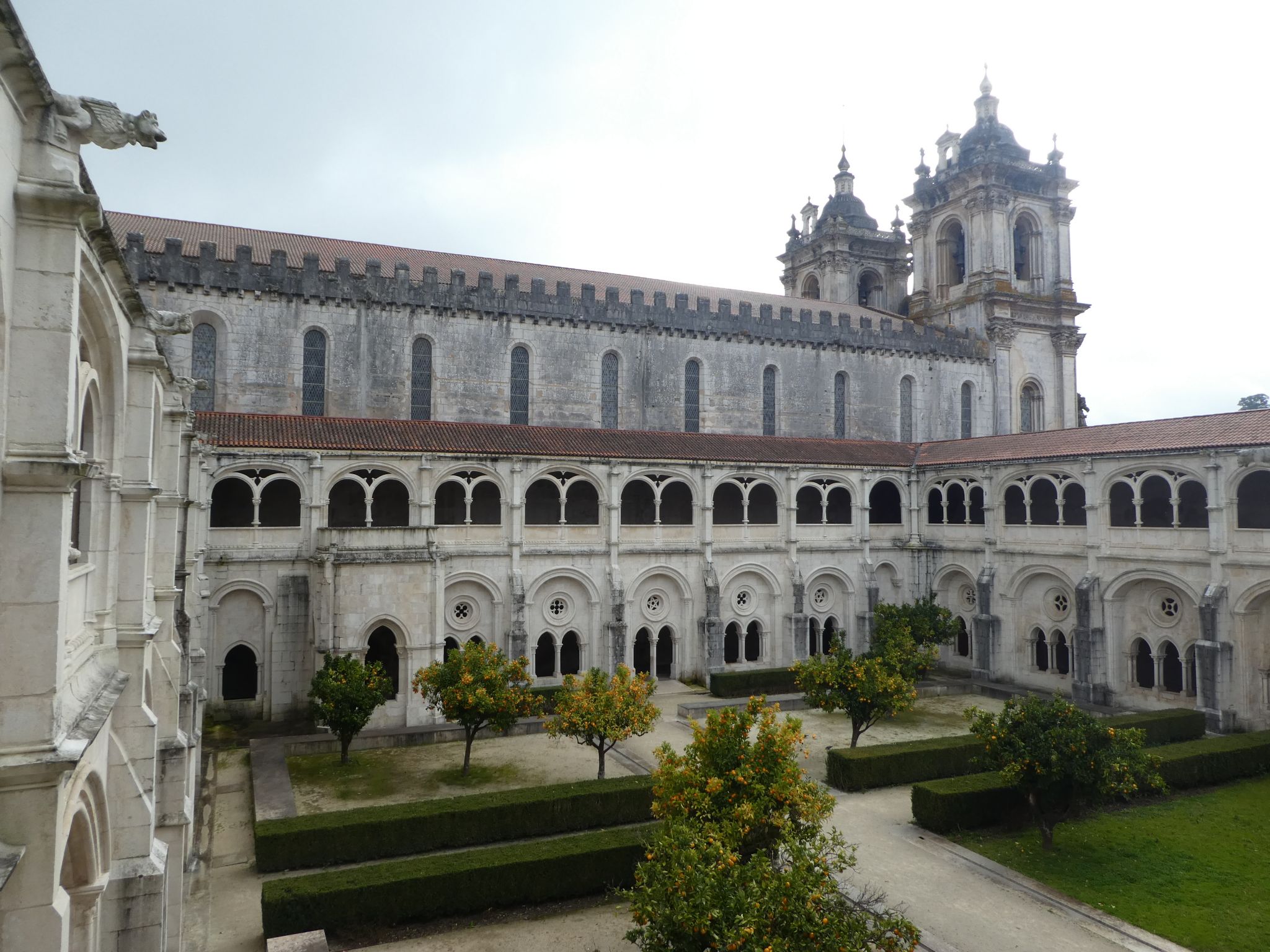 But that’s where the similarities end.  Where Batalha is a story of piety, a battle that saved a nation and a marriage which forged an enduring international relationship, Alcobaca ‘s stories are of dirty court politics, a marriage that split a royal family and monks who were anything but pious.

Several generations after Afonso I passed on, all was not well in the royal household.  King Afonso IV was none too happy when his son and heir, Pedro fell in love with one of his wife’s ladies-in-waiting.  His disgruntlement had little to do with morality and everything to do with the fact that Dona Inez was linked to Spanish royalty and he feared her family had designs on his throne.   When Pedro’s wife died, the relationship became even more entrenched.  Unknown to Afonso and in defiance of his direct order, Pedro and Dona Inez married.

Nobles advising Afonso eventually persuaded him to authorise her murder.  Enraged by her death, Pedro rebelled, formed an army and razed a good portion of the north of Portugal.  He later reconciled with his father, but his forgiveness didn’t extend to the nobles.  When he ascended the throne following his father’s death, he had Dona Inez’ body exhumed, crowned her Queen and forced the members of the court to kiss her decomposing hand.  Then he tore the hearts of the offending nobles out and ate them.  Now that’s a guy who understands revenge.

He had ‘his and hers’ tombs built in the Alcobaca monastery, asserting her status as his rightful Queen.  Like many royal tombs of the time, his rests on footings in the shape of lions.  Hers rests on half-man half-animal figures with the faces of the vanquished nobles.  A final insult to them all. 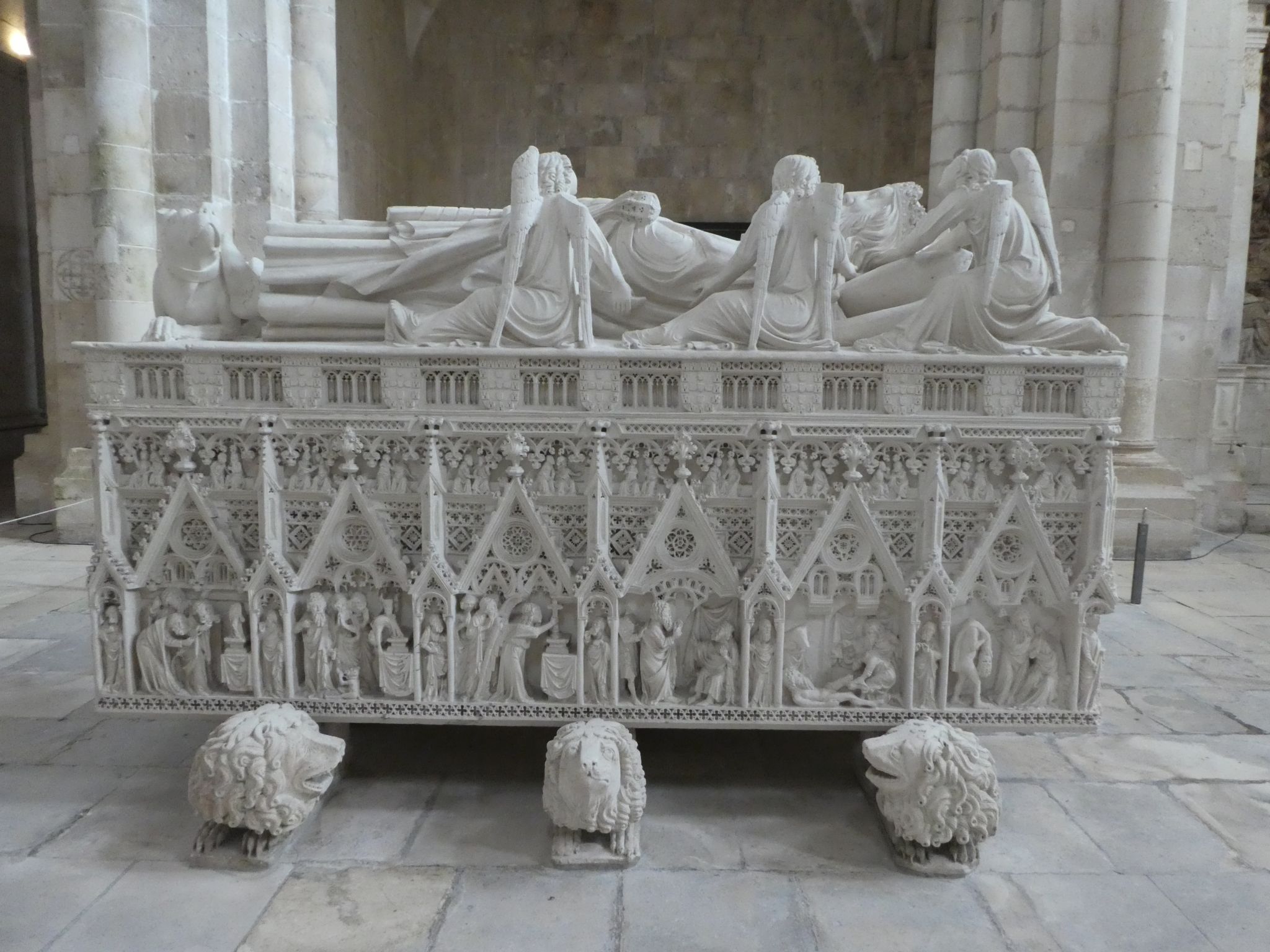 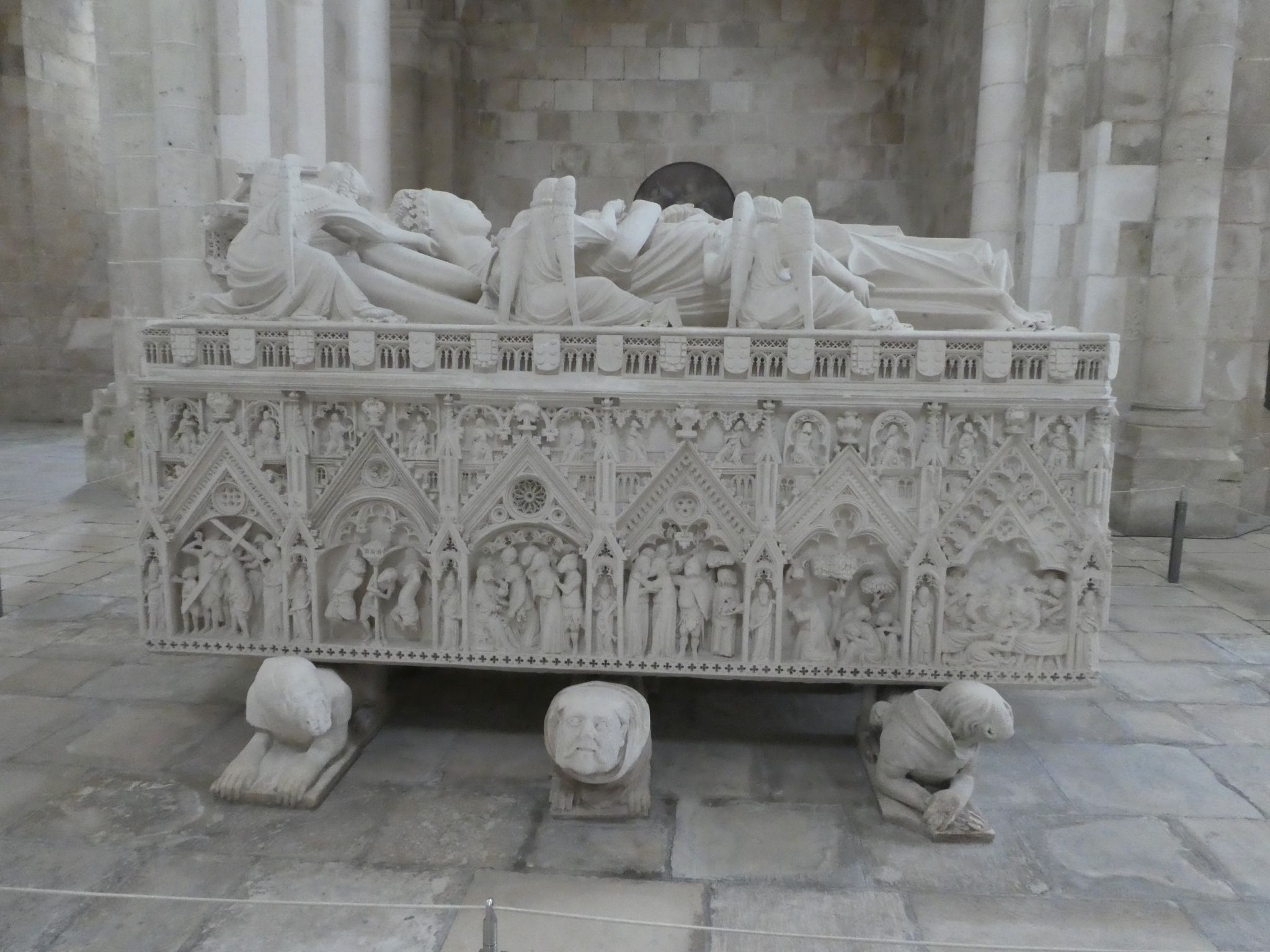 The monastery continued to prosper despite the court shenanigans, becoming one of the richest and most powerful estates in the country.  By the 1800s it was notorious for its excesses.  William Beckford described the kitchen as “the most distinguished temple of gluttony in all Europe”.  It even had a water channel through the middle to divert wild fish from the river directly into the kitchen.

But all good things must come to an end.  Threatened by the massive wealth and influence of the monastic orders, which Alcobaca epitomised, the State nationalised the assets of the more than 500 monasteries across Portugal in 1834.  Truly it was a victim of its own success.

Jump forward to 1917 and three shepherd children report that the Virgin Mary appeared to them in the fields of Fátima conveying secrets and teaching them new prayers.  By now you might have guessed she’s popular in this part of the world.

The children were nine year old Francisco, his seven year old sister Jacinta and their ten year old cousin, Lúcia.  They claimed to experience six apparitions over about four months.  Despite their young age, the children’s accounts were treated as credible.  After the first few were reported in the national press, thousands flocked to the area and many claimed to have also witnessed the later apparitions.

Less than three years later, Francisco and Jacinta were both dead, victims of the influenza pandemic which swept the globe beginning in 1918.  Their mother and Lúcia always maintained that during one of the apparitions the Virgin had told the children that the siblings would not live much longer.

Lúcia grew up, became a nun, continued to regularly report visits from the Virgin, and died in 2005 at the grand age of 97.

In 1930 the Catholic Church deemed the apparitions “worthy of belief” and granted a papal indulgence to pilgrims visiting Fátima.  A basilica was built. 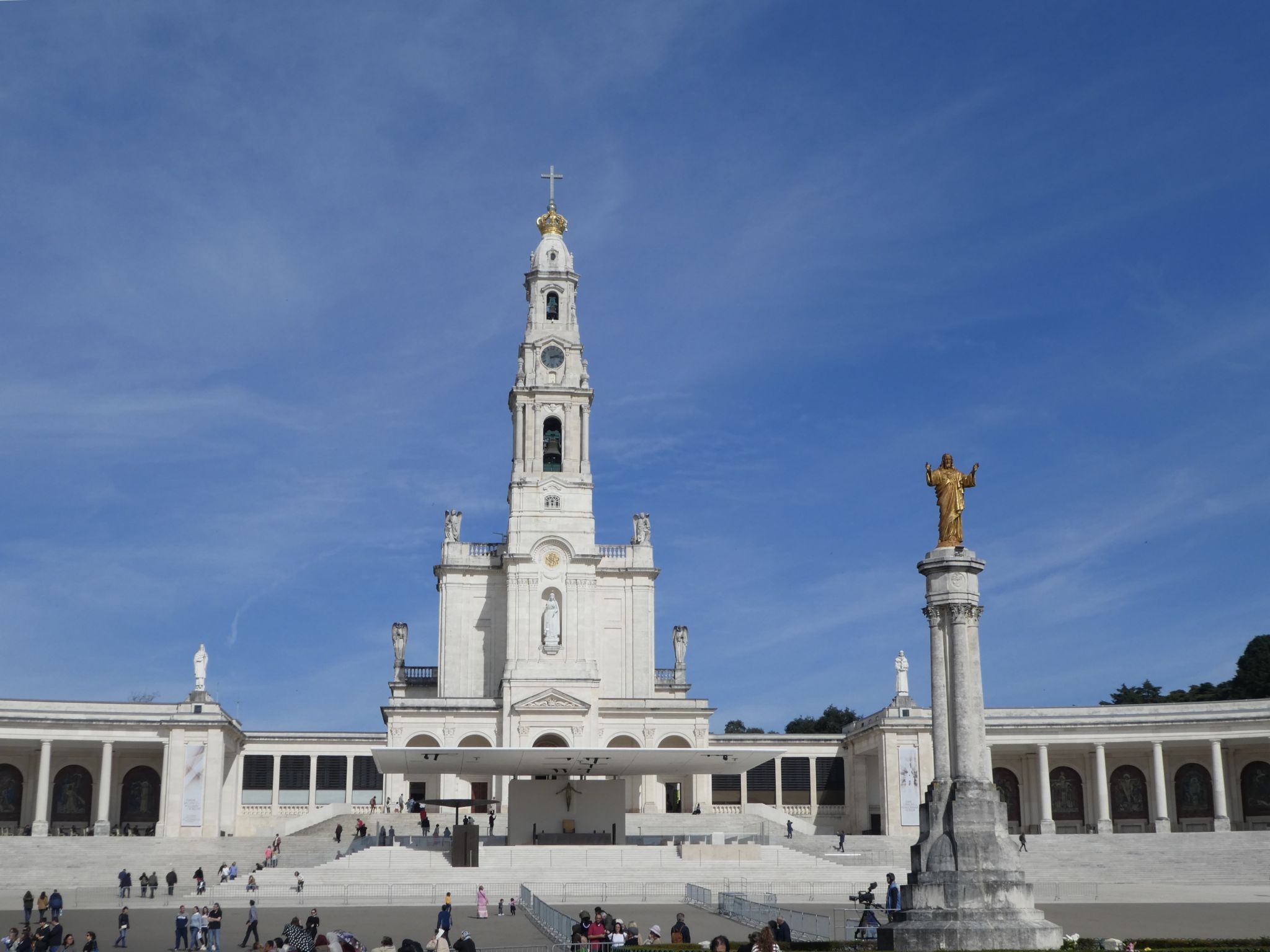 In 2017, Francisco and Jacinta were canonised.  They are the Catholic Church’s youngest saints who did not die as martyrs.  (Having lived so much longer, the canonisation process for Lúcia is still a work in progress.). To mark the occasion another basilica was built. 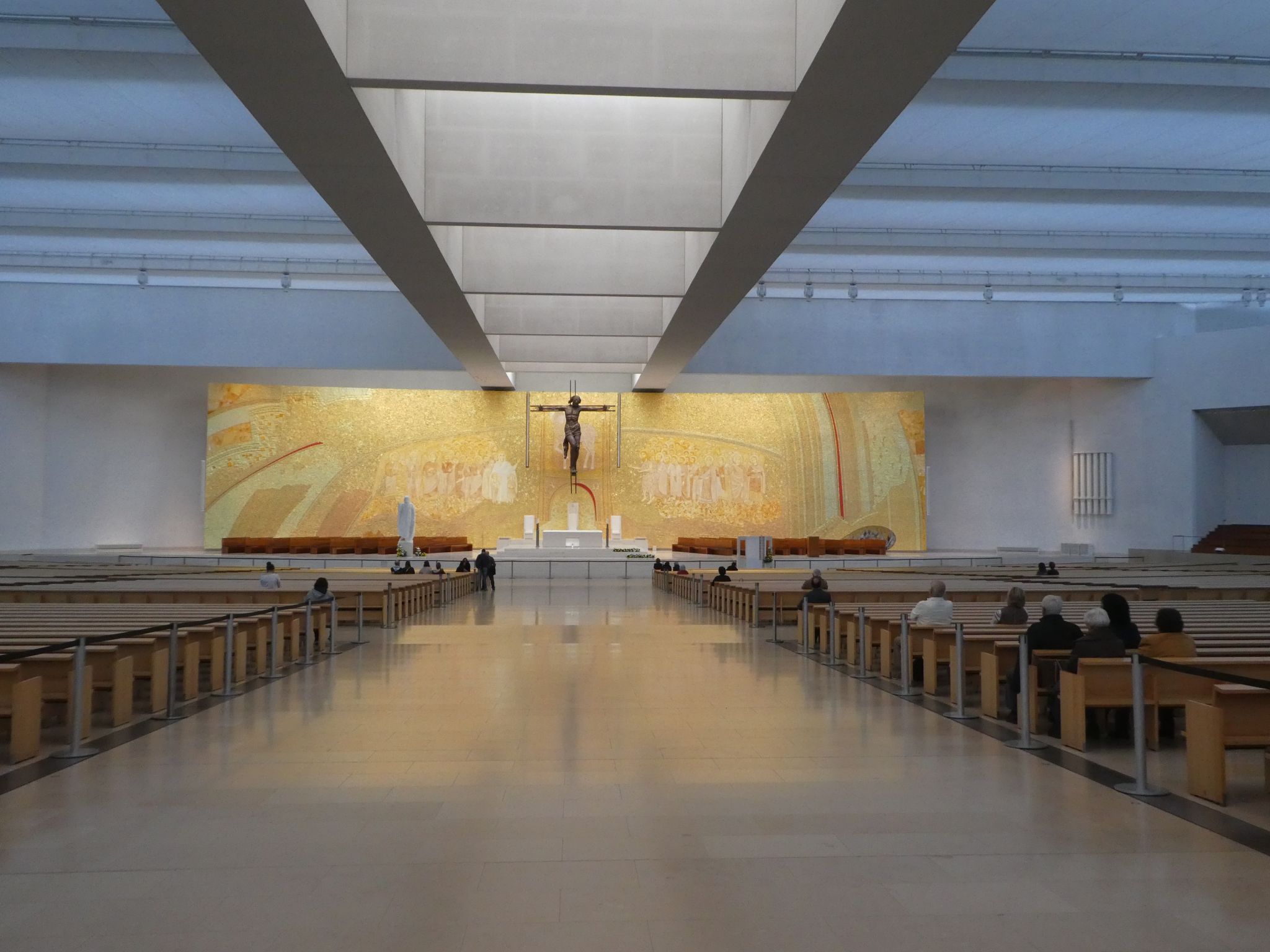 And this is where it gets seriously weird.  Between the two basilicas is one kilometre of concrete with a painted stripe.  Pilgrims shuffle on their knees from one to the other as an act of penance or thanks for prayers answered.  It hurts.  A lot. 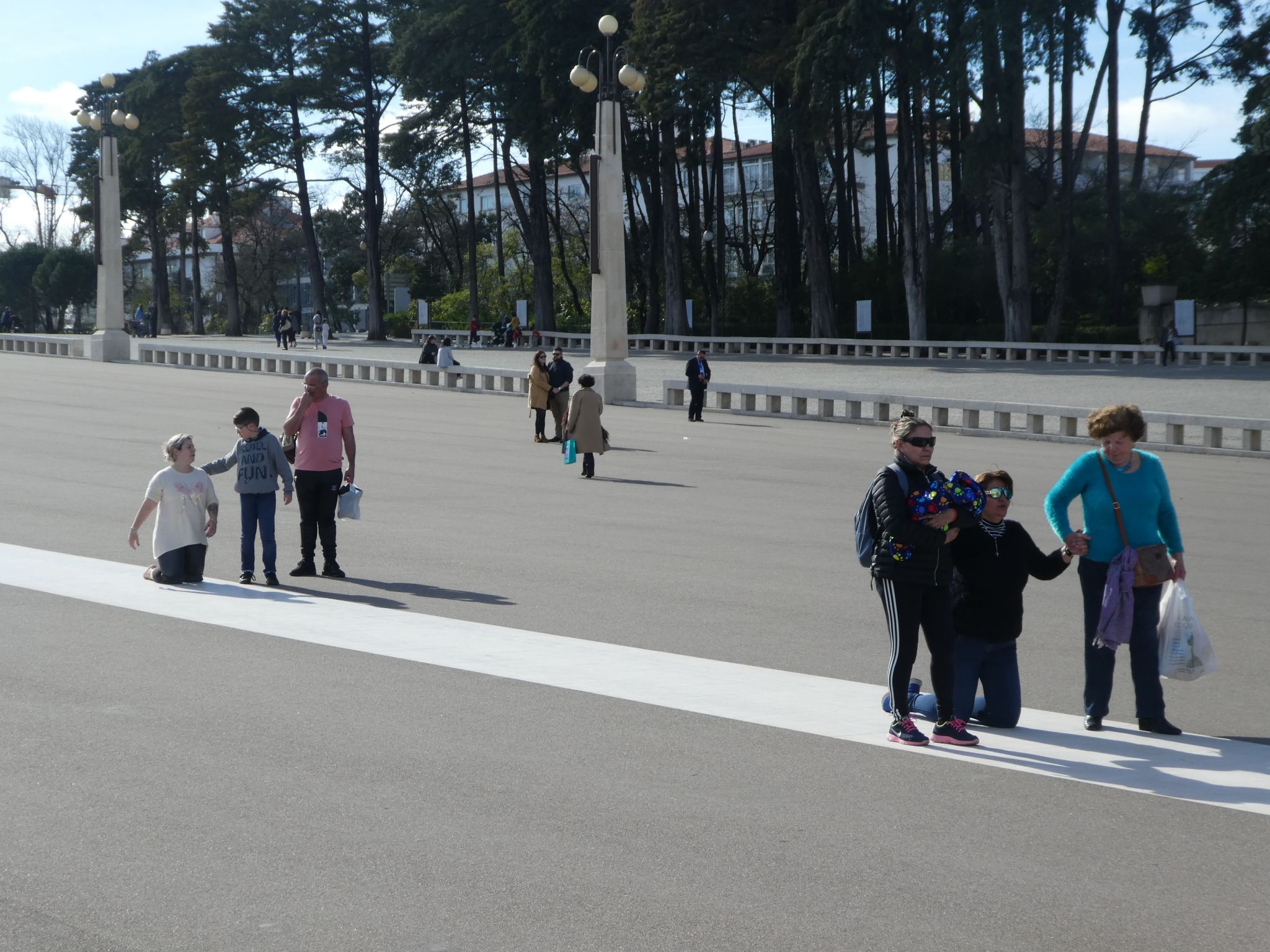 And in between the basilicas is a massive furnace into which believers throw wax images representing the subject matter of their prayers – mostly body parts, and the occasional small child, it seems – which can be purchased at local stalls. 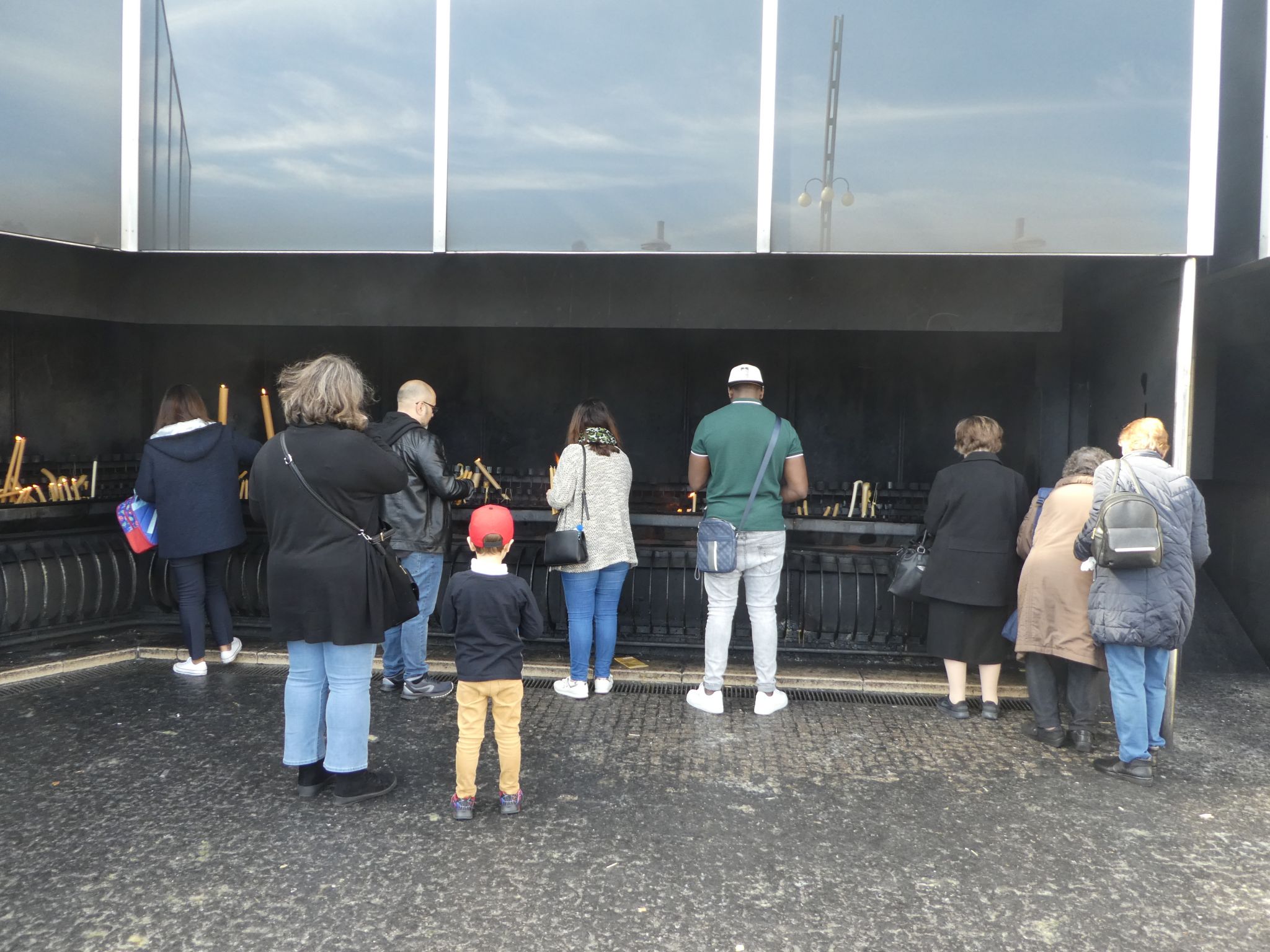 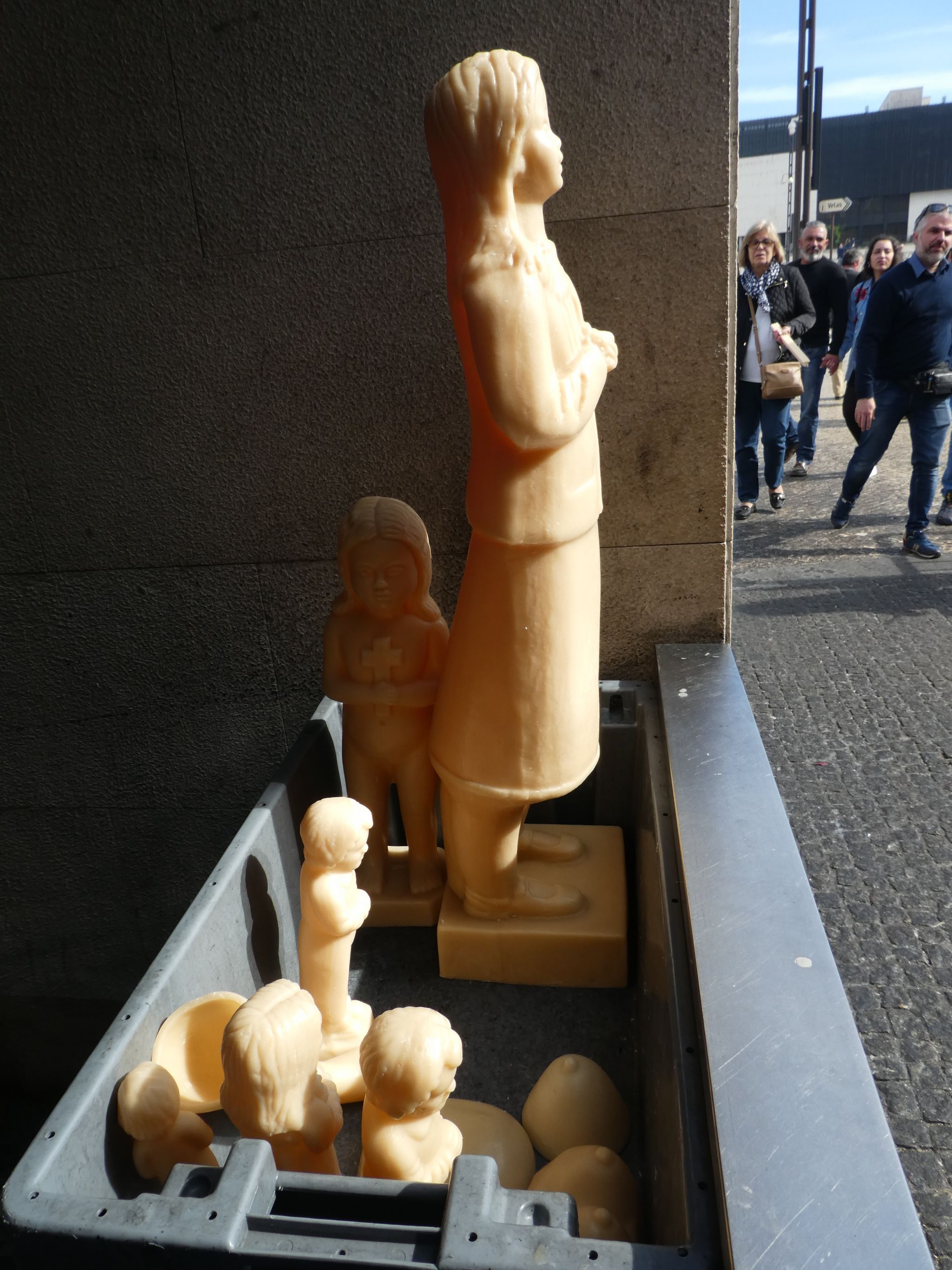 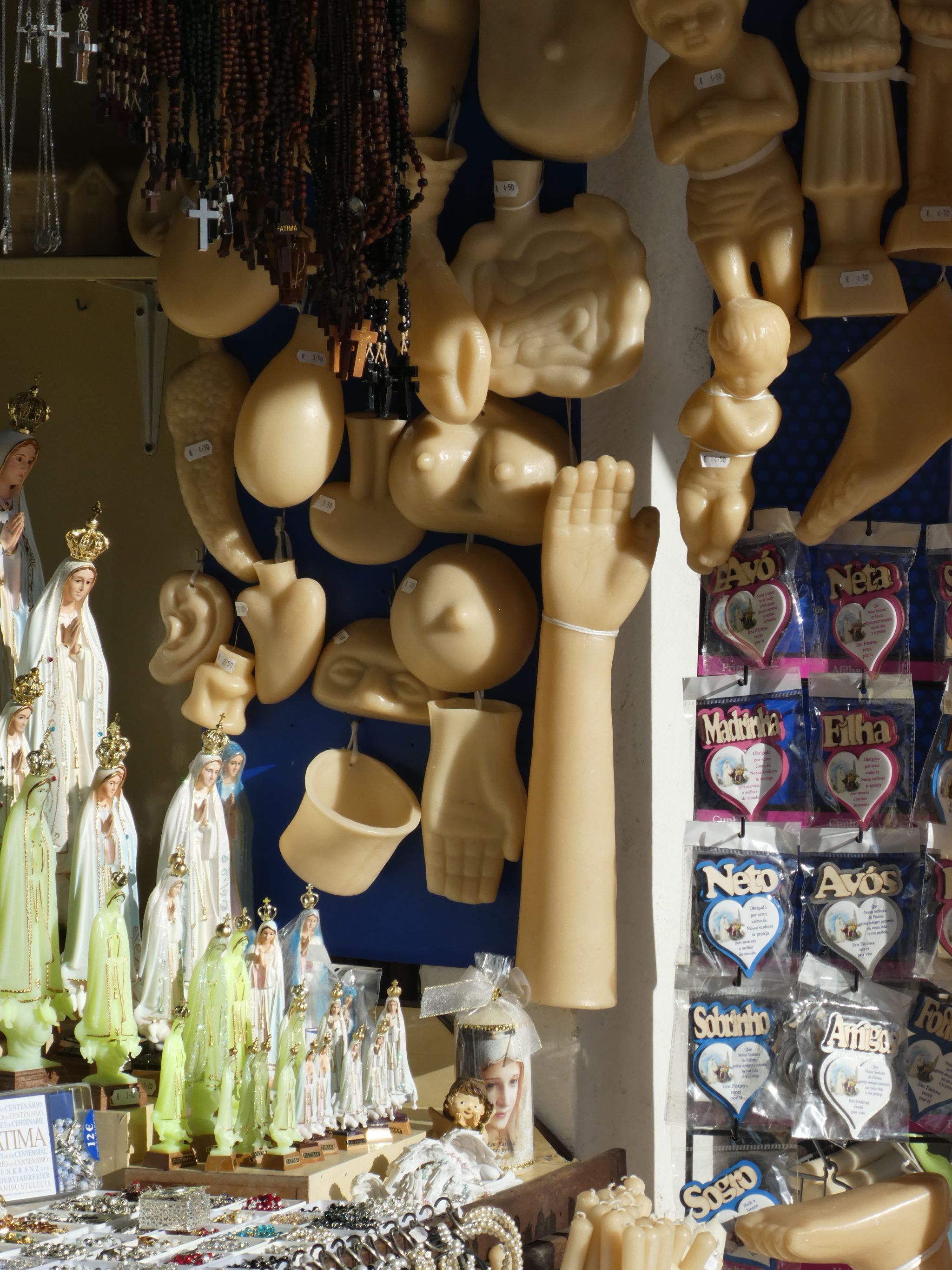 So there you have it.  Three monumental religious edifices, all dedicated to the Virgin Mary, but with such different back stories.  John drily observed that for a man with no religious beliefs he’d seen the inside of a lot of churches lately.  It was time to move on to more earthly delights.