Porto.  The name says it all really.

Since the 1300s, the Portuguese had been producing wine from grapes grown in the Duoro region inland of Porto, fortified by the addition of grape spirit, barrel aged and then bottled.  They just called it wine.  Well, vinho, probably.

In the 1700s, war between Britain and France meant that British wine traders were banned from buying wines from France.  They started to source wine here, and the British public got a taste for this slight fortified, easy drinking lusciousness.  The traders called it ‘port’ or ‘port wine’, after Porto, where almost all of it came from.

The trade became so dominated by just a few British firms that the Portuguese Prime Minister established a state company to hold a monopoly on the handling of wines coming from the Duoro.  He demarcated a region for the production of ‘port’ – the first attempt to control wine quality and labelling in Europe.

To this day, the name is protected.  Only port produced from a designated area in the Duoro, and made according to strictly prescribed methods, can be called ‘port’.

Which is a long way of saying ‘when in Porto, you must drink port’.  Many producers have their cellars along the banks of the river, and have guided tours and tastings.  We visited Calem.  It’s one of the newer houses, only been around since 1859. 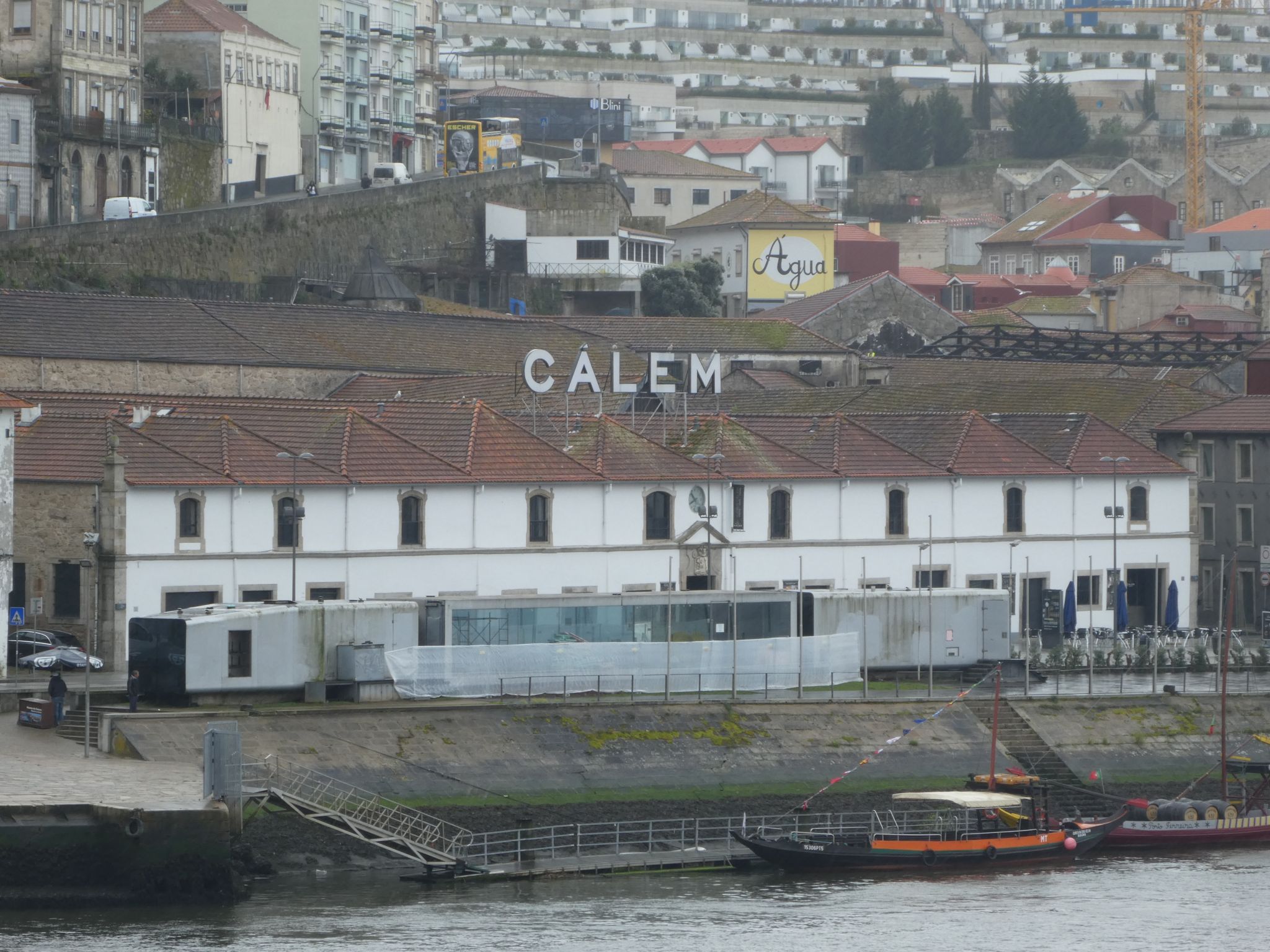 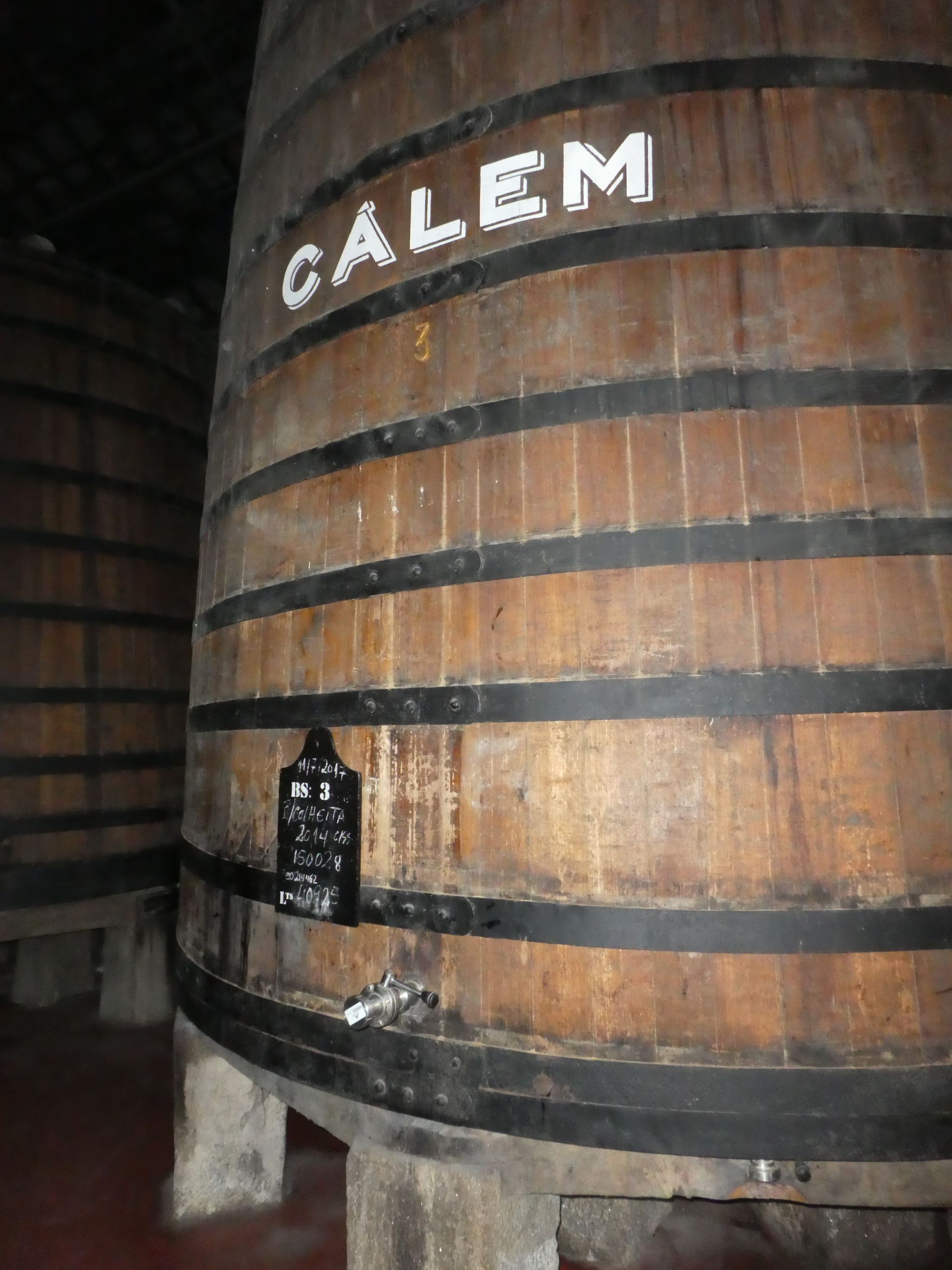 A weather depression by the unlikely name of Laura was sitting off the coast, making things wet and windy.  Perfect weather for drinking port.  We were not convinced of the merits of drinking it as an accompaniment to a meal, which locals do, but it certainly makes a good aperitif and a very fine finisher.

A lot of tourists do winery tours up to the Duoro Valley, and it’s certainly spectacular country, but we weren’t after a wine tour.  Julie just wanted to visit one particular place.

If you are an Australian who came of age in the 60s, 70s or even the early 80s, you might remember this.  The height of sophistication back in the day.  A former work colleague who went to university in the 1970s tells the story of going to dinner with a large group of friends.  On arrival he discovered that every last one of them had brought along a bottle of Mateus rose. 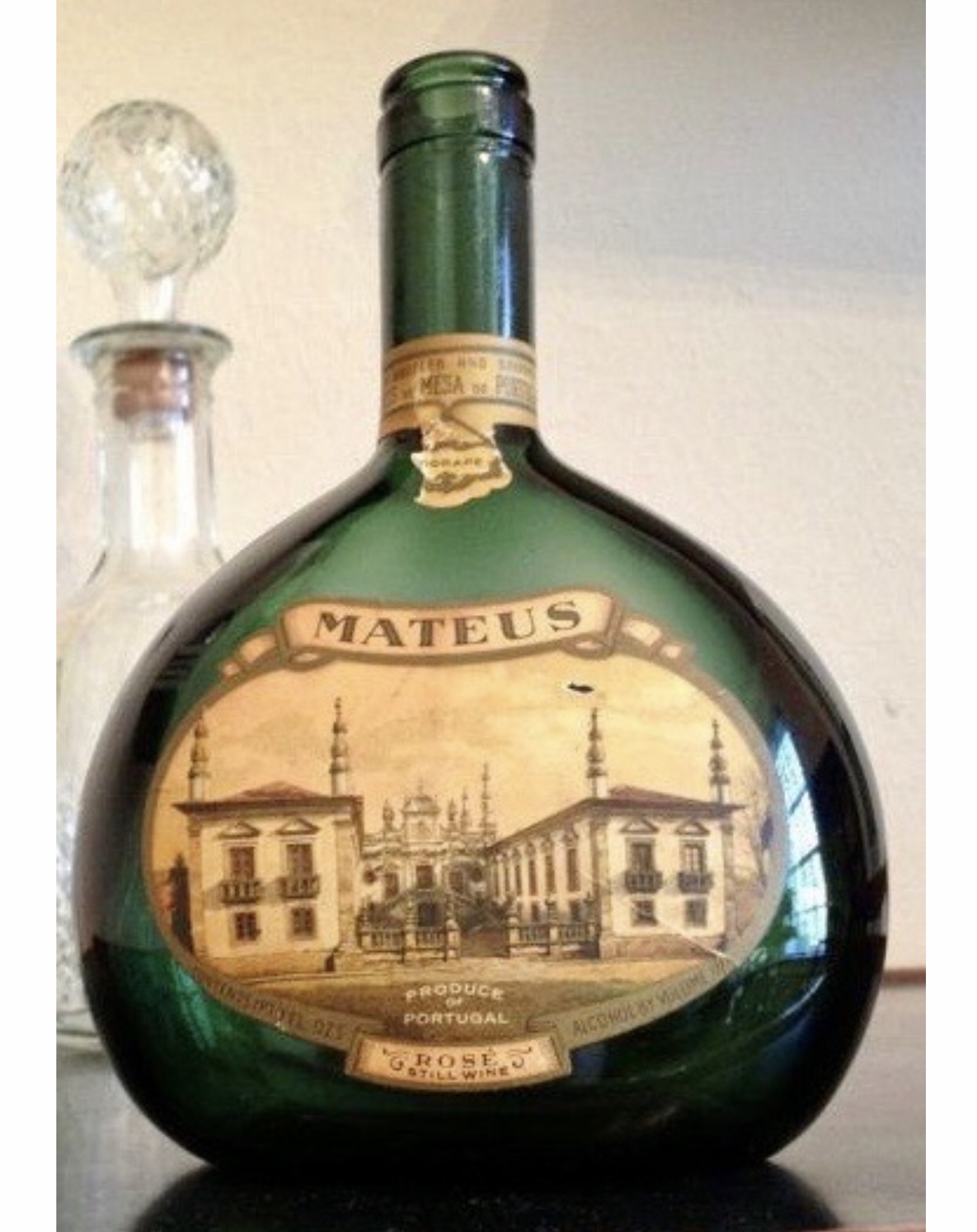 Casa Mateus is still pumping out wines, some considerably more elegant than its mid 20th century rose, and the winery house featured on that iconic label is still there.  We had to go.  Well, Julie decided we had to go.  We caught two buses and walked a few kms in the rain only to be told that the next tour would be in two hours time, in Portuguese, and wine tastings were closed that day.  But we still had to pay the entrance fee just to get past the trees to see the house and get that photo. 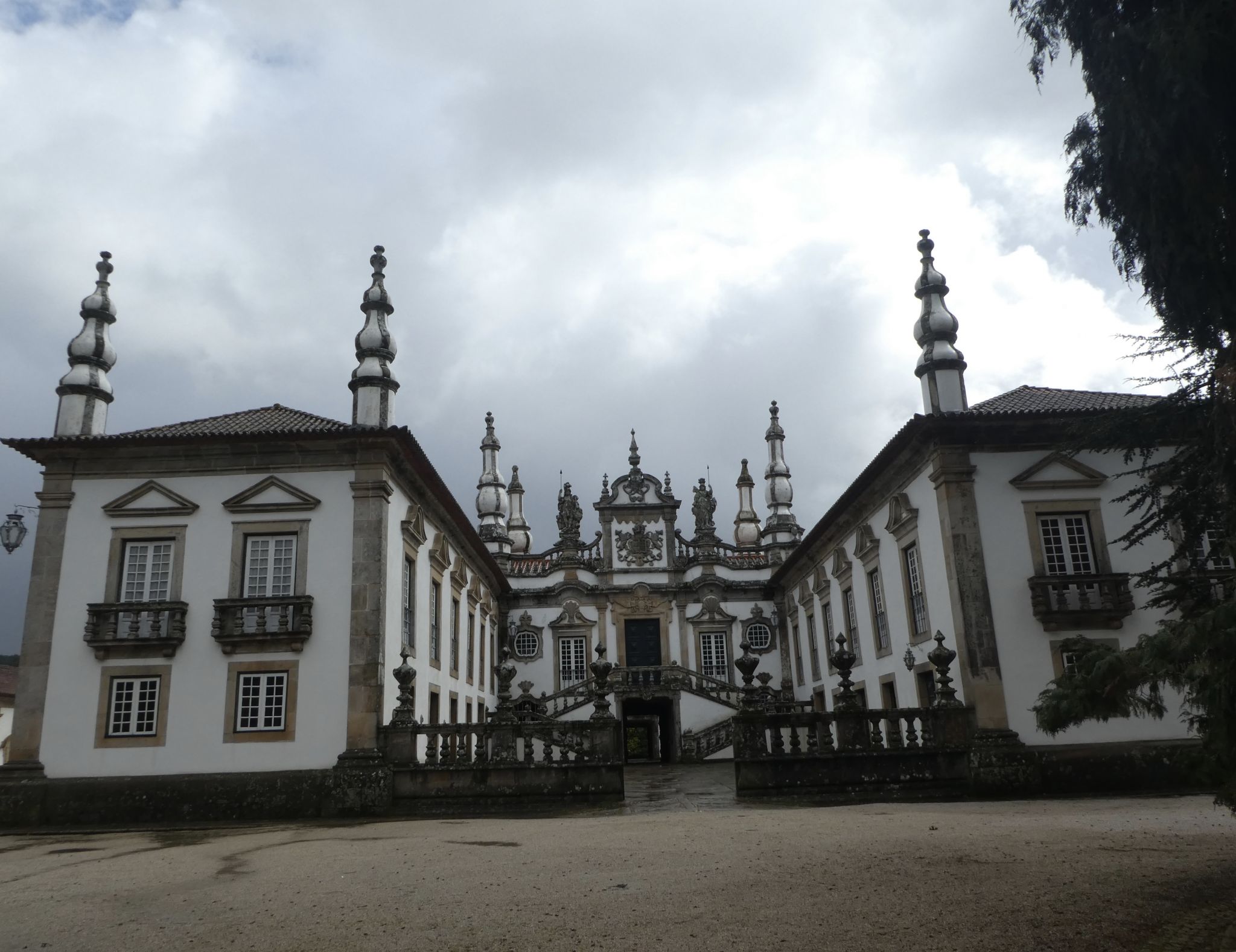 We walked around the gardens, then back to the bus stop, a long wait in the rain and two buses back to Porto.  An entire day’s exercise.   For Julie it was a trip down memory lane.  John pronounced it the most trouble taken to get one photo.   But a few glasses of port took the edge off his disappointment.

Porto also has some magnificent examples of the azulejos (painted tiles) for which Portugal is famous.  The Sao Bento Railway Station is brilliant. 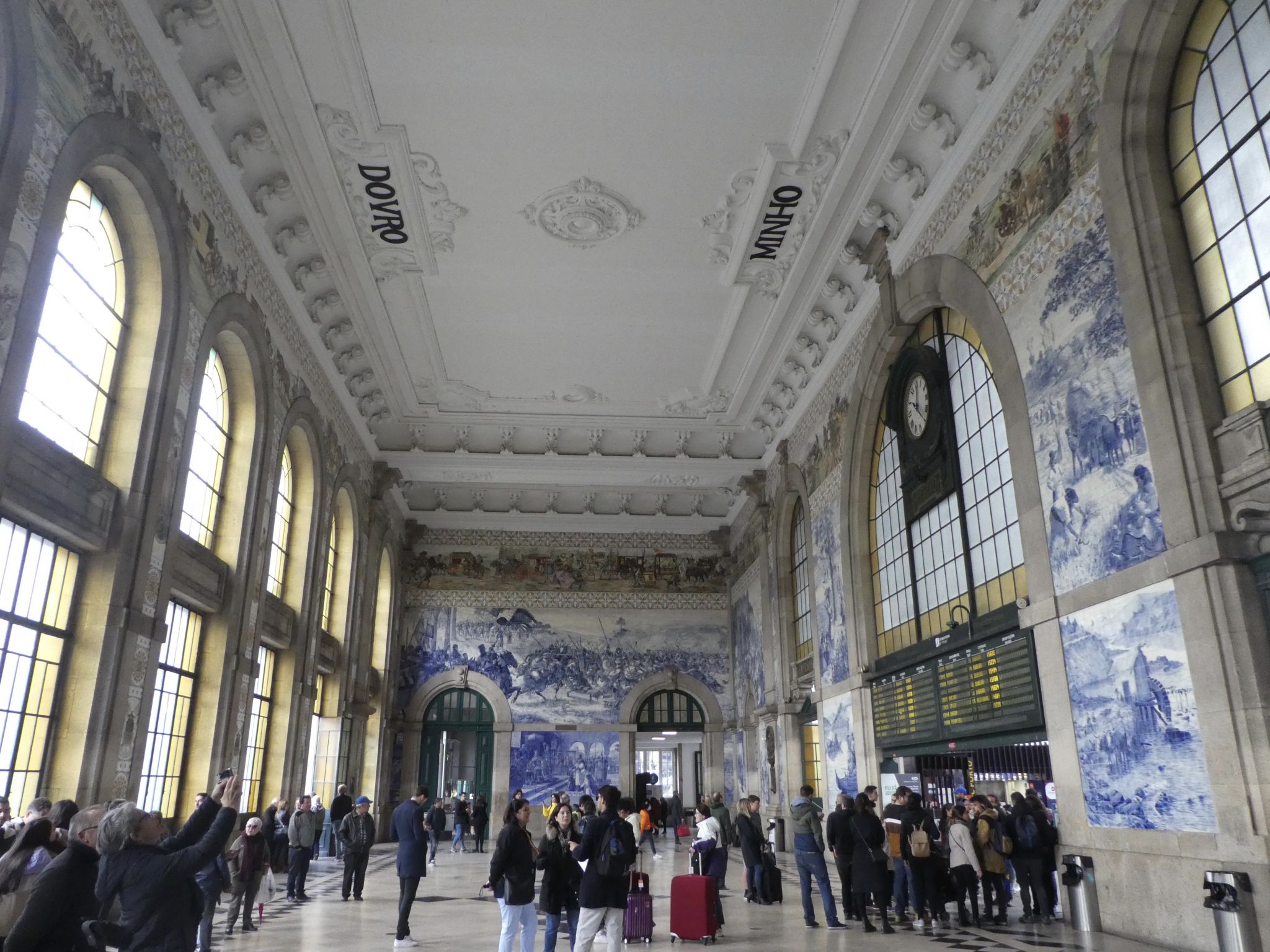 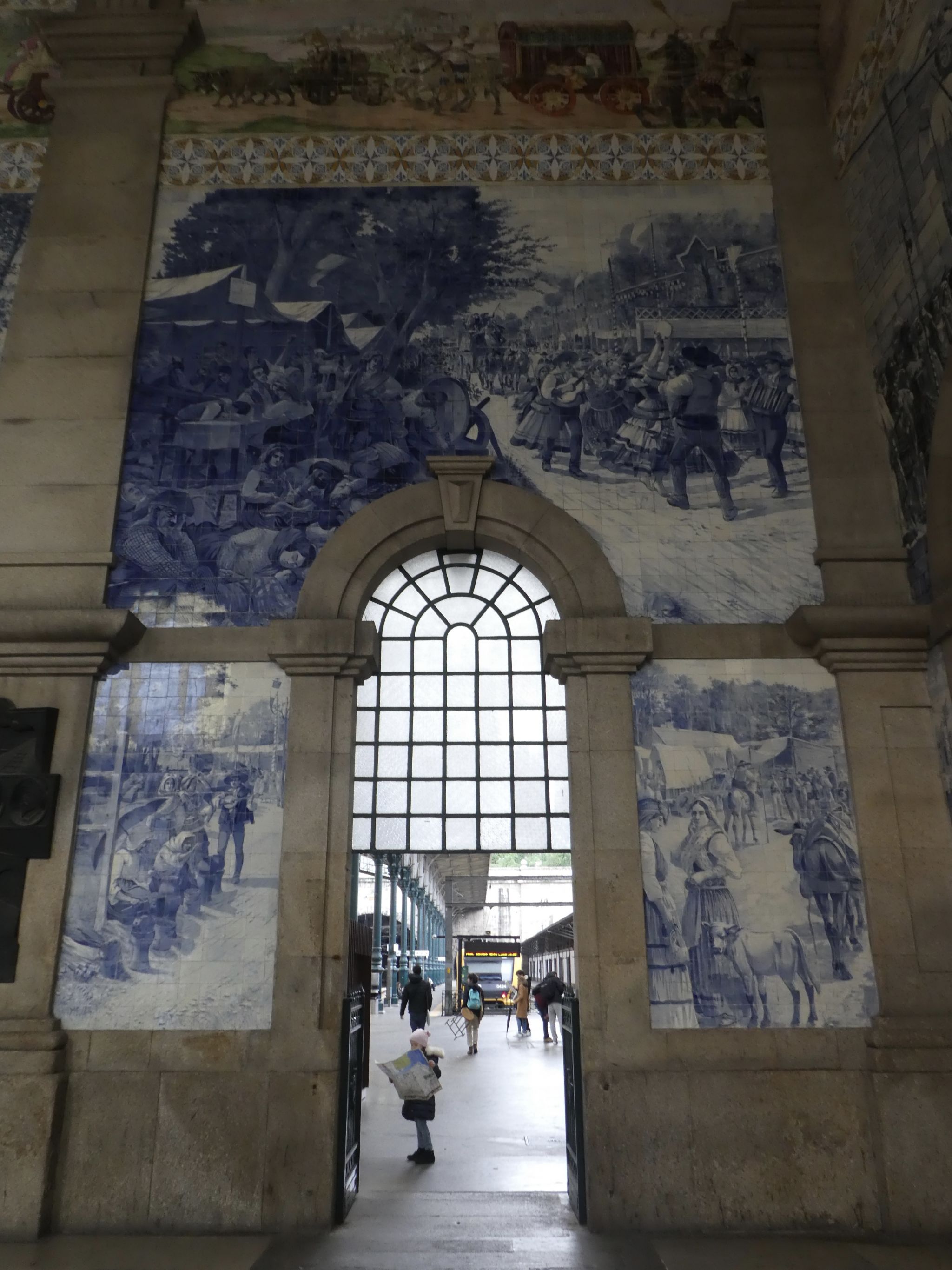 And for a highly unusual example of the azulejos being used on the outside of a building, there is the stunning Capela das Almas. 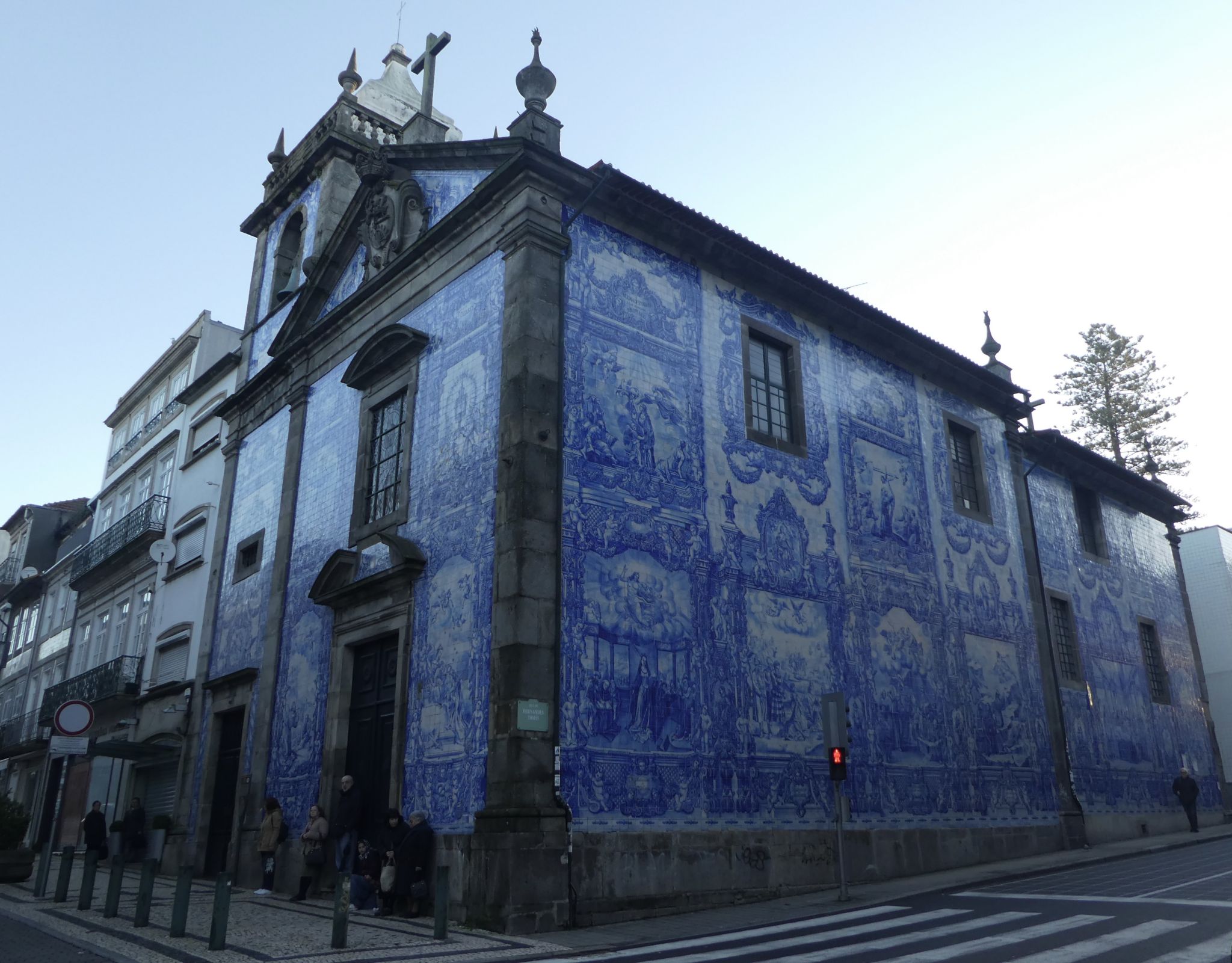 Yes, there’s a heap of cultural things to do.  Cathedrals, monasteries, baroque architecture.  There’s a photography museum with a collection of cameras used in espionage – miniature cameras in cigarette packets, soft drink cans and other objects.  And a tram museum.

Oh, and exactly where else but Portugal would you find a store with a Ferris wheel made of tins of sardines?

Or sardines de-boned by hand and individually packed into tins which look like gold bullion bars and cost an extraordinary €22. 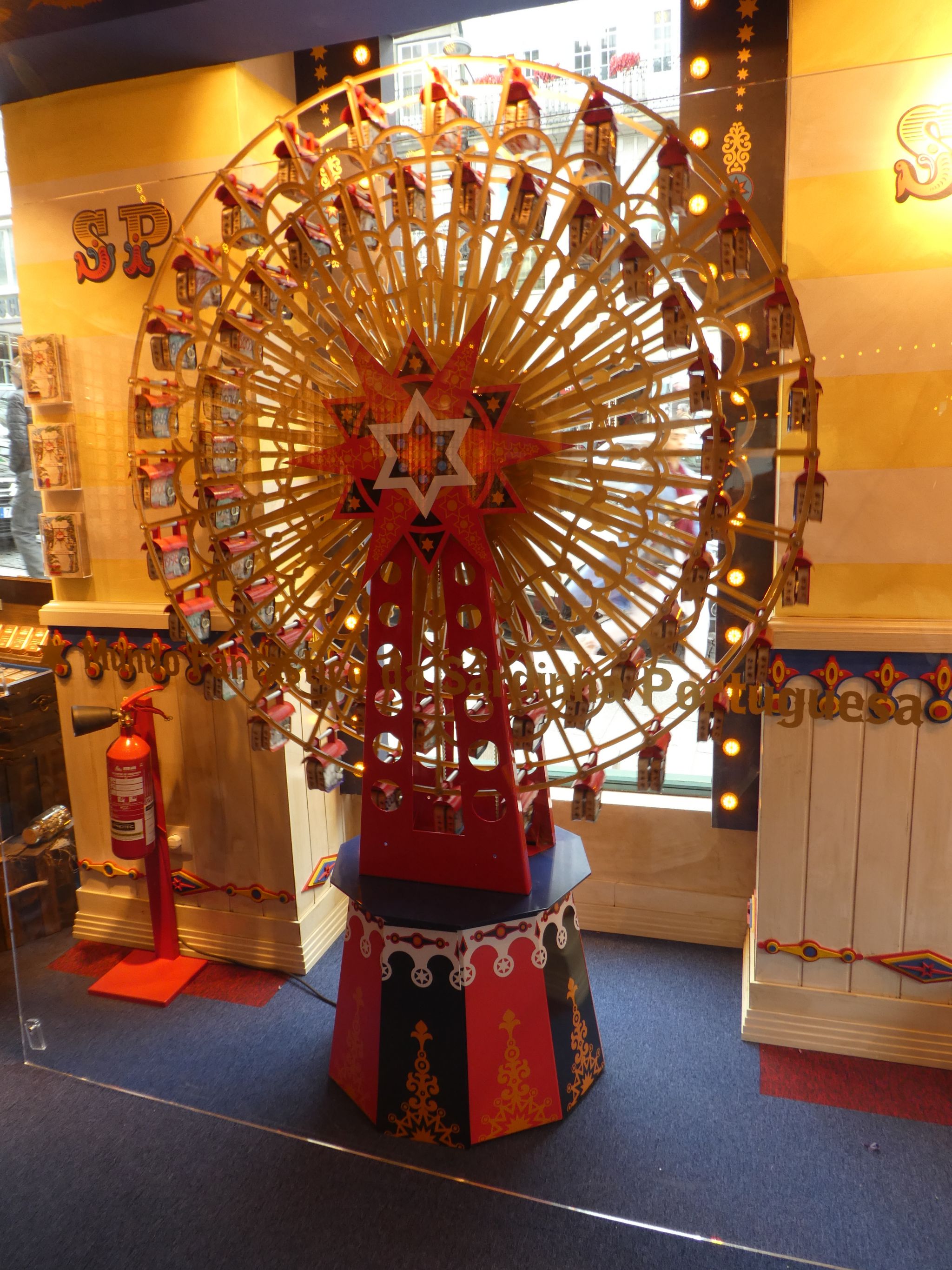 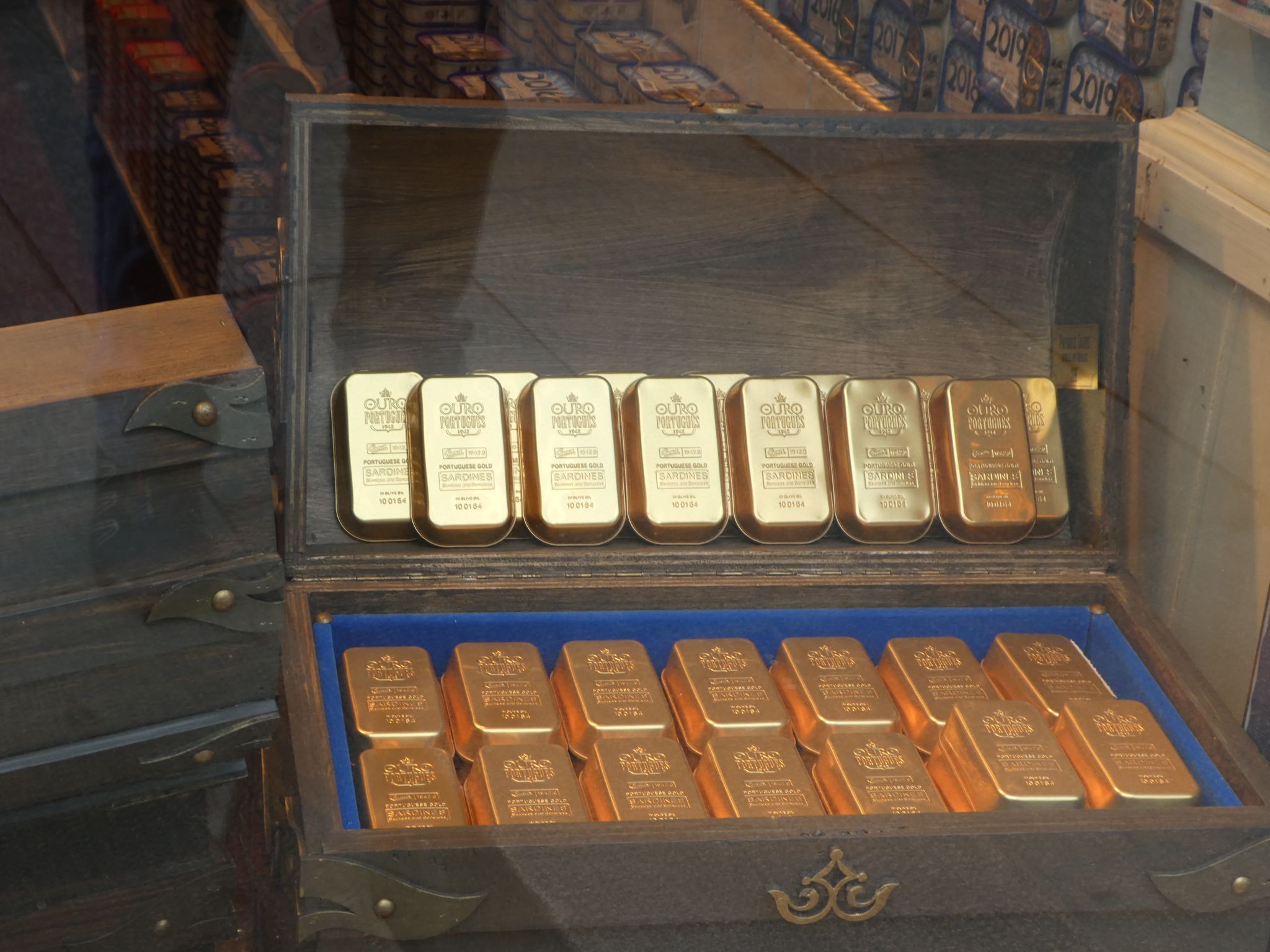 But really Porto is just a great place to kick back and drink port.  And when the weather’s bad, even more so.  Weather depression Laura did us a favour really.