Anti-establishment protest has a long history in Bristol.  As early as 1794, Bristolians were described as “apt to collect in mobs on the slightest occasion”, after 11 people died and 45 were injured in the Bristol Bridge Riot of 1793, a protest against bridge tolls.

In 1831, the city rioted for three days after the House of Lords rejected reforms which would have given more Bristol citizens the vote.  More than 100 were arrested, 4 of whom were subsequently hanged, despite a petition signed by more than 10,000 locals requesting they be pardoned.

In 1909, suffragette Theresa Garnett attacked Winston Churchill with a riding crop at Bristol Temple Meads shouting “Take that in the name of the insulted women of England”.

So perhaps it’s not surprising that in the 1990s, social comment in the form of graffiti sanctioning rioting would emerge strongly in Bristol.  Although his identity remains ‘secret’, it is generally accepted that the graffiti artist known as Banksy grew up here.  There’s still quite a bit of his work in Bristol and we went looking.

This early Banksy work entitled Mild Mild West is said to depict the good citizens of Bristol as cute and harmless as teddy bears – until threatened, at which time they will reach for a Molotov cocktail. 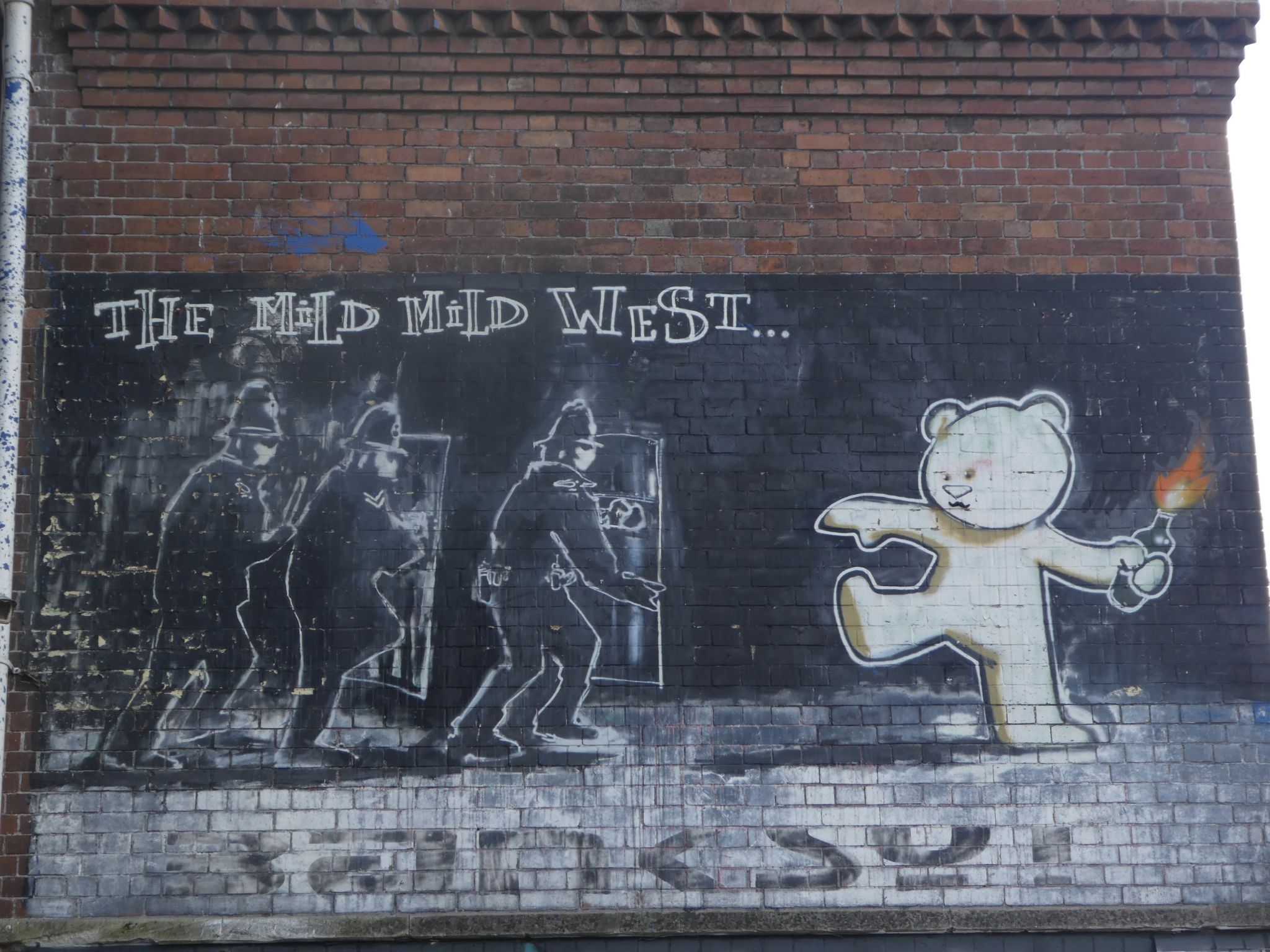 In 2011, police raided a squat in the suburb of Stokes Croft claiming they had received information that petrol bombs were being assembled there for an attack on a newly-opened Tesco store.  The raid involved 160 police in riot gear as well as reinforcements on horseback.  Officers were accused of using unnecessary force.  Riots ensued.  The Tesco store was torched.

Banksy created a print, and donated the profits from its sale to the People’s Republic of Stokes Croft community group.  This copy is in the M Shed museum.   Incidentally, the M Shed is a fantastic museum, highlighting local history from famous people and events to ‘local heroes’ and displays on different communities throughout Bristol. 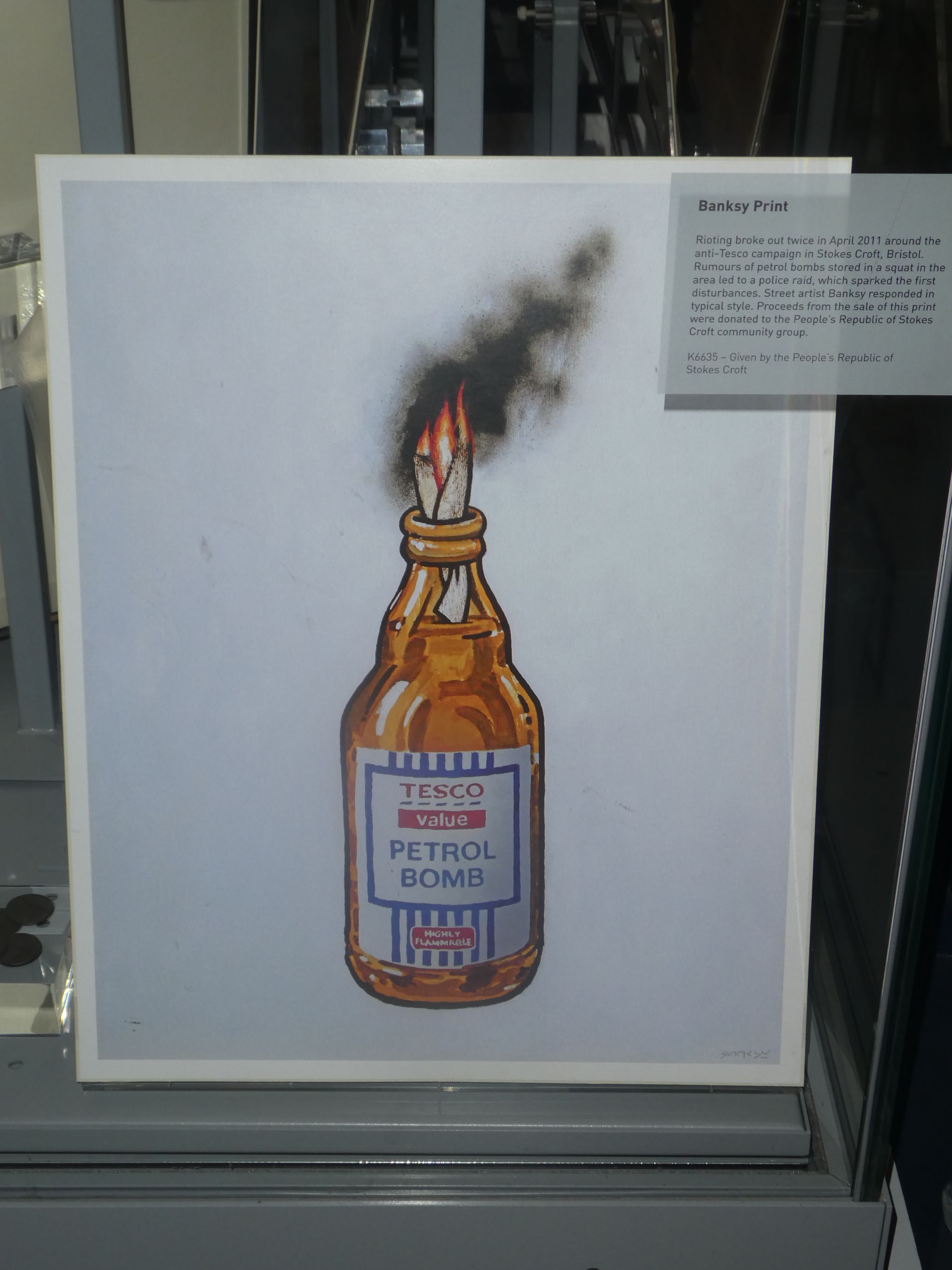 Stokes Croft is still a slightly grungy, counter-culture type suburb, and it seems anti-Tesco sentiment still persists.  We spotted this (not a Banksy) high on a building. 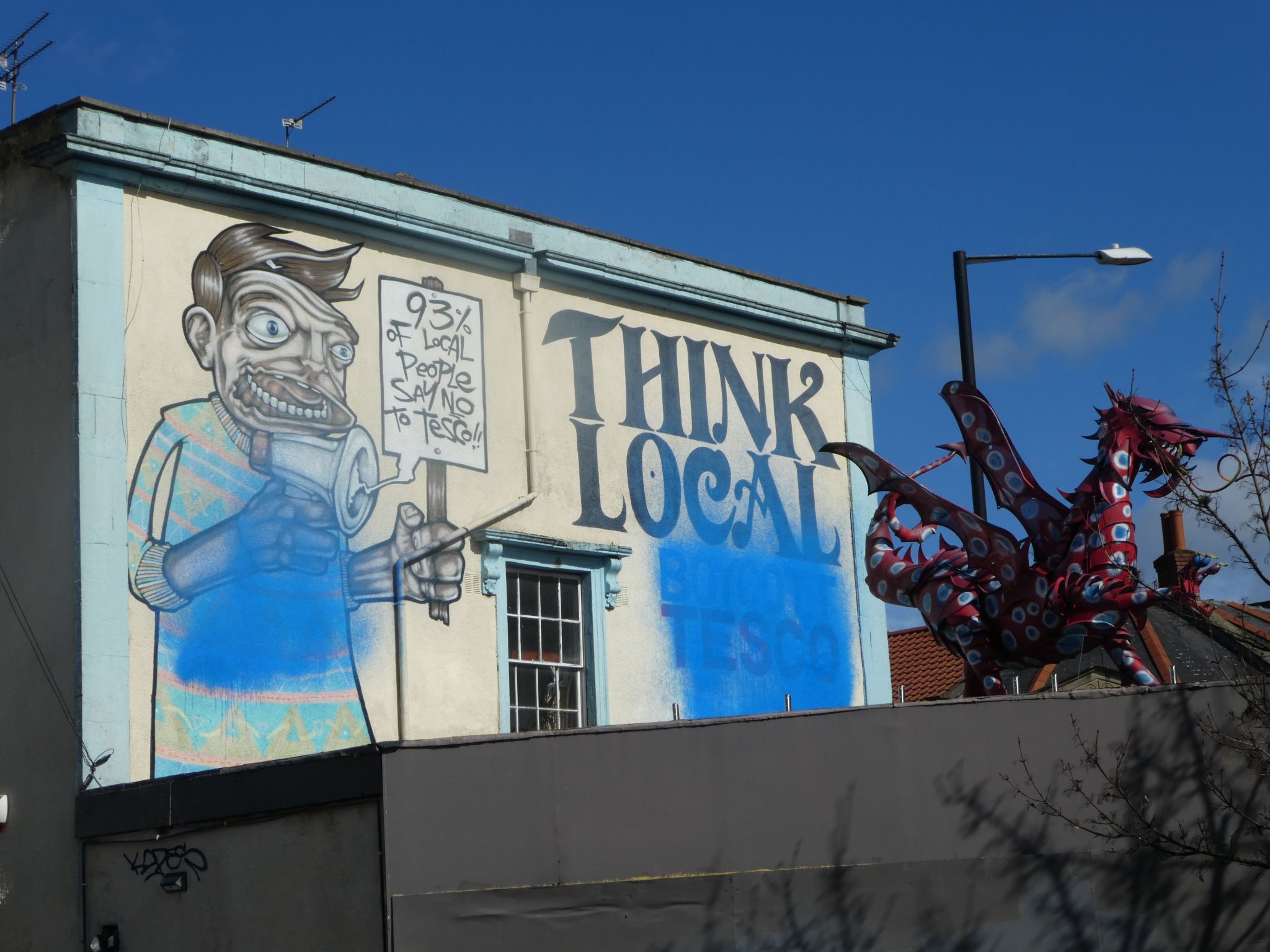 Can graffiti as social comment be justified notwithstanding it’s usually illegal?  Banksy obviously thinks so.  In Cat and Dog, a cat spraying graffiti is approached by menacing guard dogs (presumably representing the establishment/police) and includes the caption “There are crimes that become innocent and even glorious through their splendour, number and excess”. 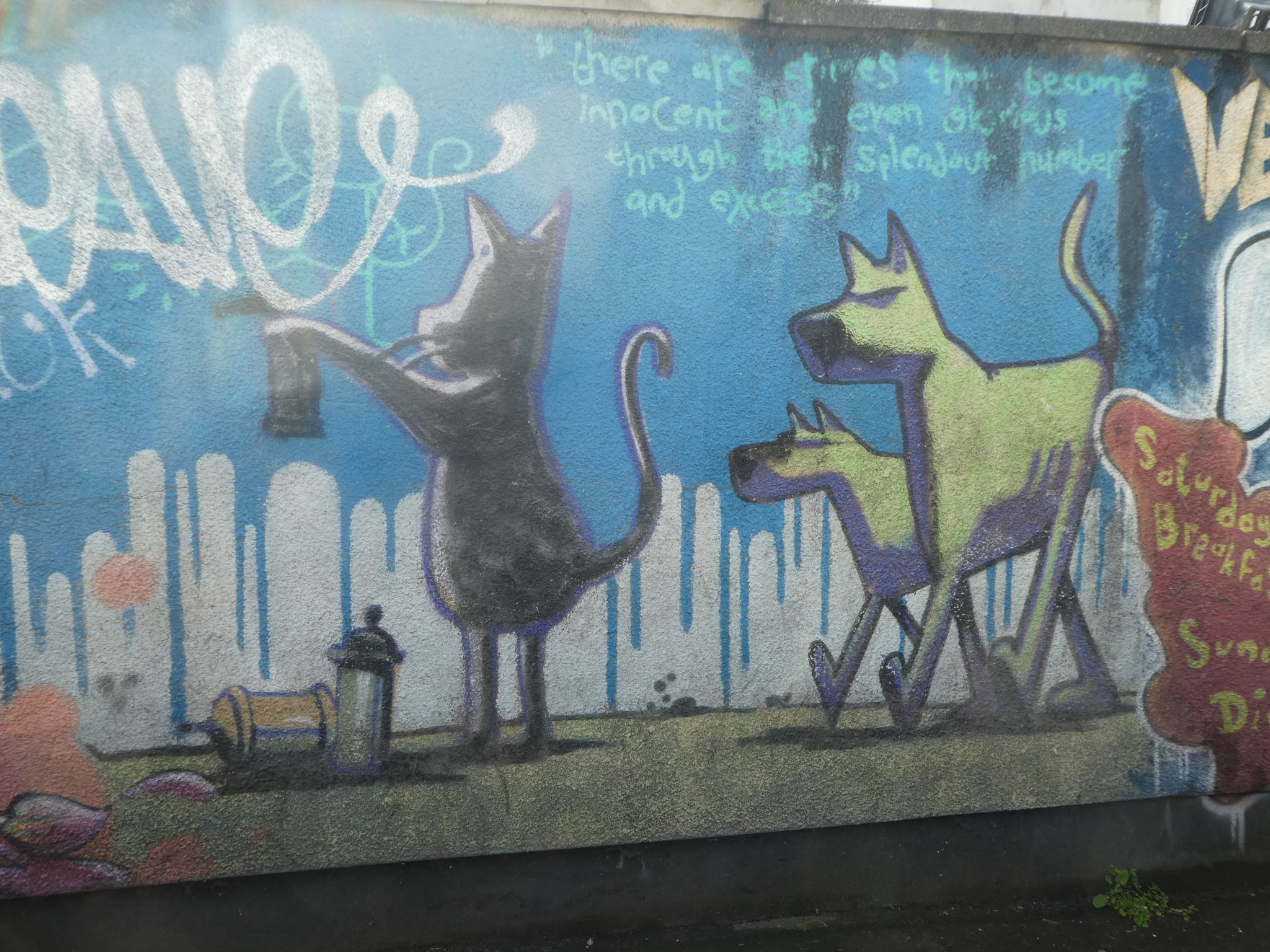 Not sure we agree, but you have to admit some of it is just very, very clever.  Like this one.  The brilliantly named Well Hung Lover adorns the side of a building which used to house a sexual health clinic.  Some idiot has shot it with a paint ball gun, but you still get the pun. 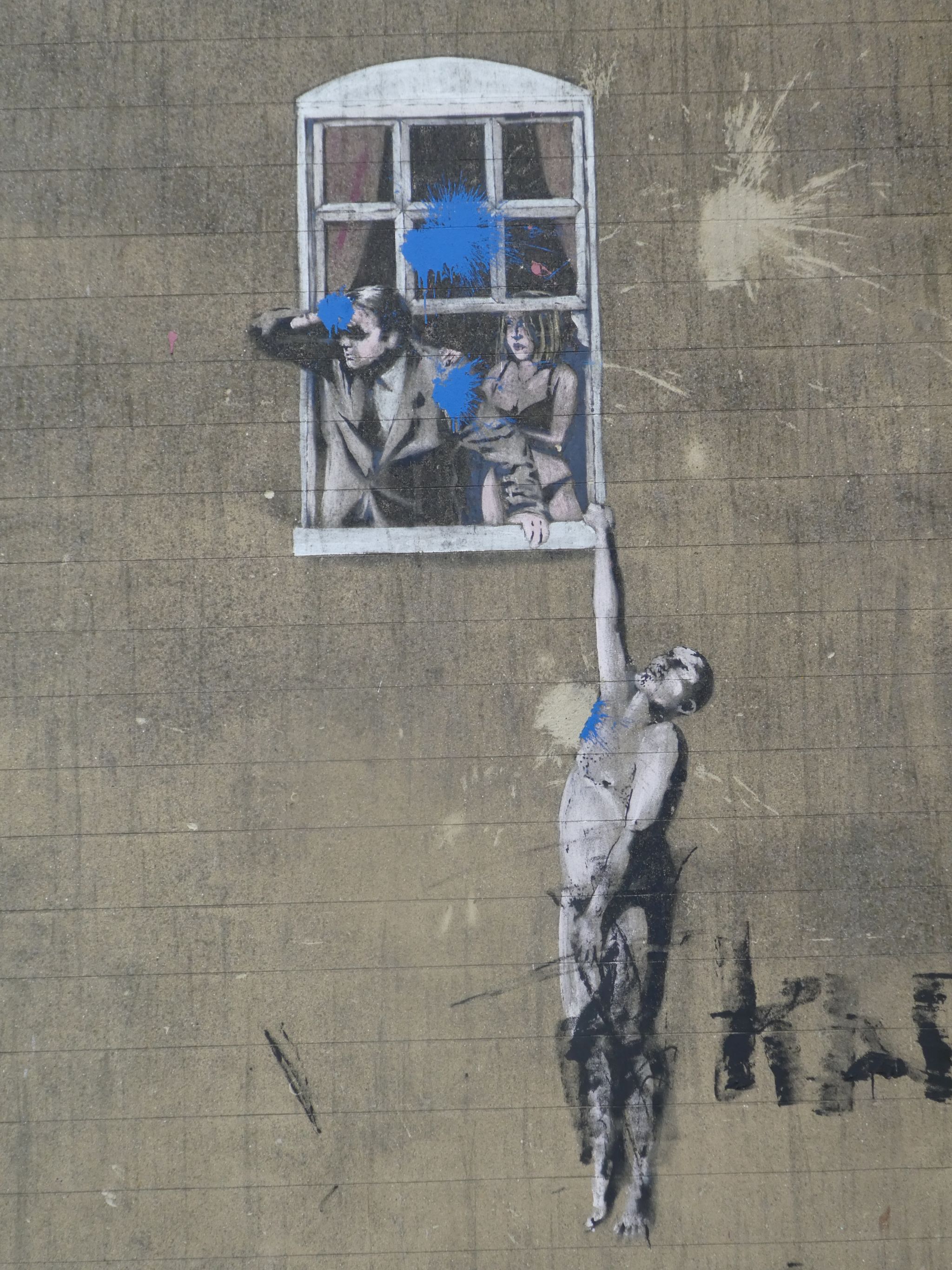 There’s also Girl with the Pierced Eardrum, a satirical reference to Dutch painter Johannes Vermeer’s famous Girl with the Pearl Earring.  Banksy’s version makes use of an alarm box as the earring/piercing. 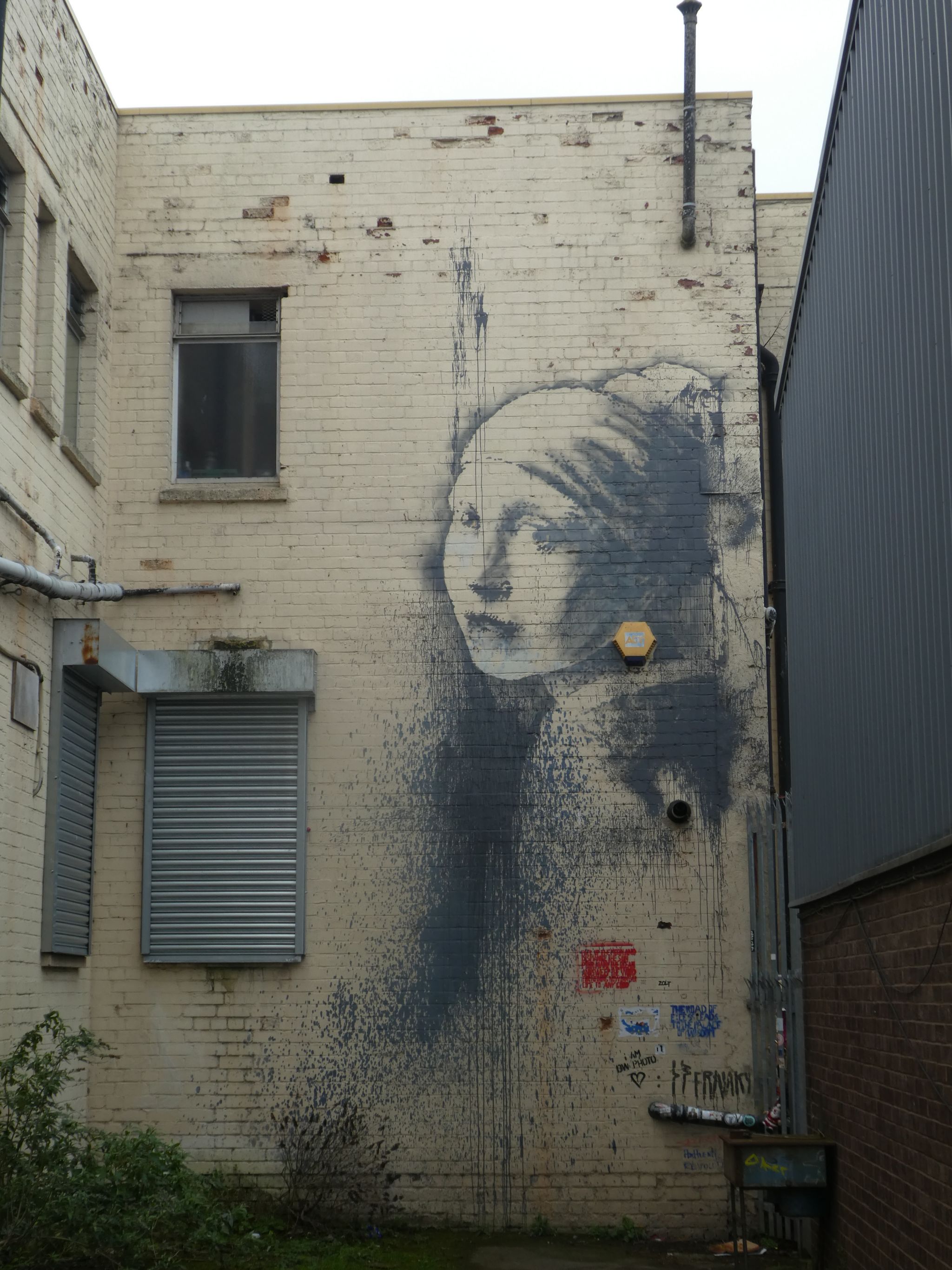 In London, reaction to Banksy’s work has been mixed.  Transport for London continues to maintain it is vandalism, despite the popularity and commercial value of ‘a Banksy’.  But many building owners who have woken to find a Banksy work on their wall have taken steps to preserve them by installing protective covers.  There’s only one instance of this in Bristol.  Locals contributed to a cover for Rose Trap. 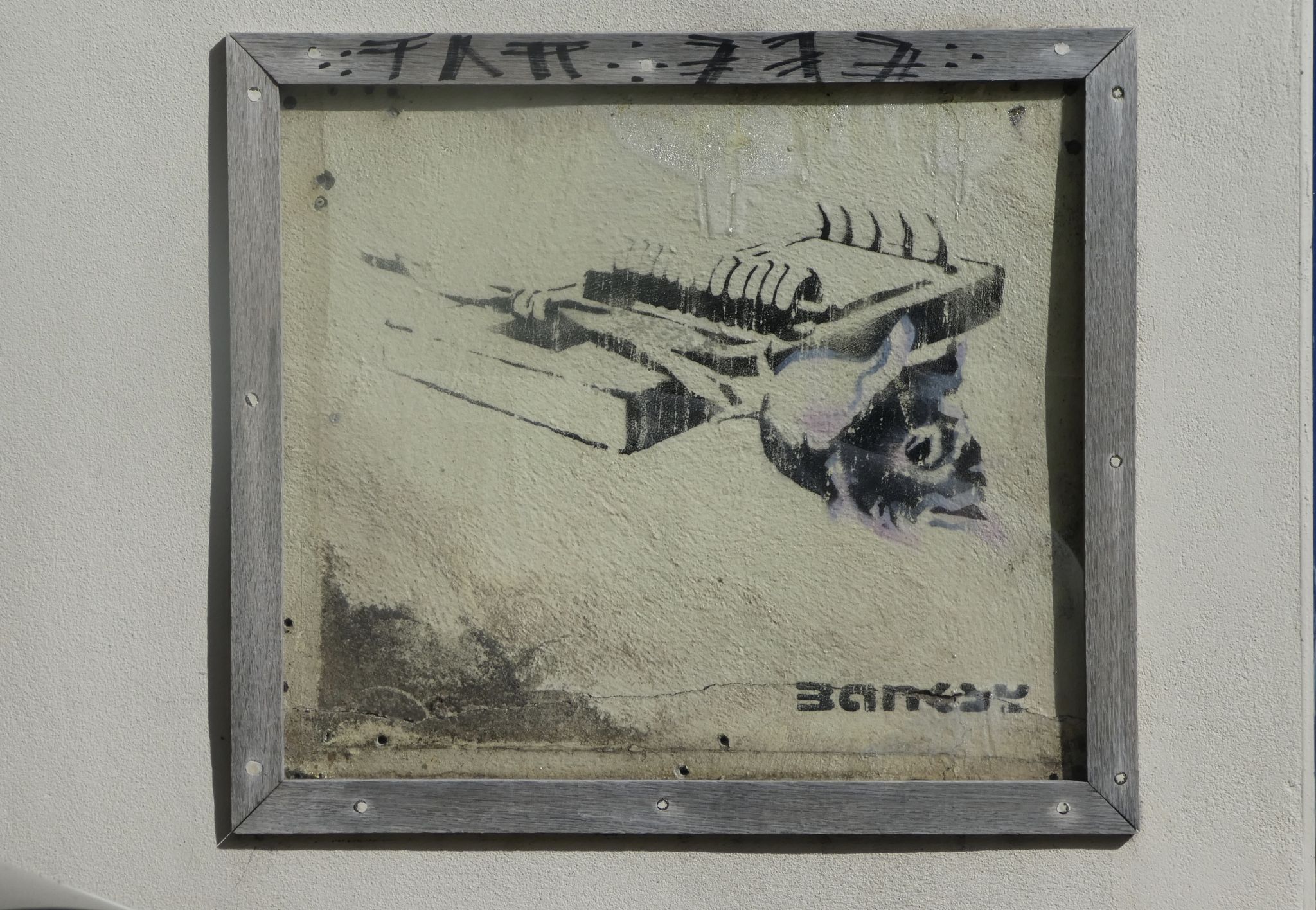 Gorilla in a Pink Mask wasn’t so lucky.  When new owners bought the building, they didn’t appreciate its significance and painted over it.  Attempts to restore it have not been particularly successful. 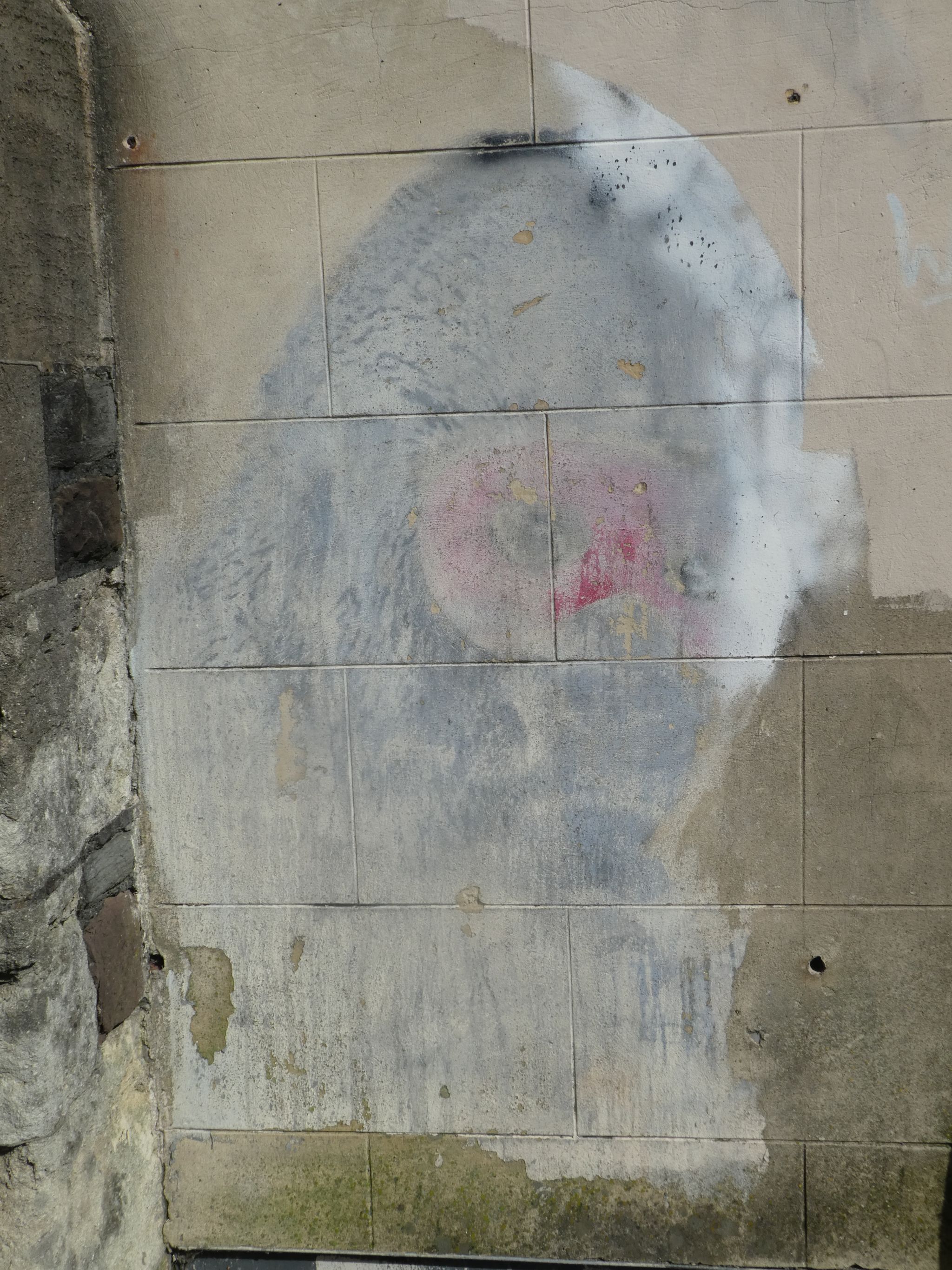 Banksy’s work also raises the interesting issue of who ‘owns’ graffiti, and who has the right to insist it be preserved.  The Thekla Social Boat has been permanently moored in Bristol Harbour since 1983, housing a theatre and music venue.  In 2003, Banksy stencilled work inside the nightclub and on the hull, presumably with the owners’ permission.  The harbourmaster had the tag on the hull painted over, whereupon the owner of the music venue threatened to sue him.  In response, Banksy returned and, in the same spot, created one of his most famous Bristol works, Grim Reaper.

Depicting the reaper in a boat which seems to sit right on the waterline, it must have been a rather awkward one to paint.  This time, the mural remained for years until it was removed to the M Shed museum (on long term loan from the owners of the Thekla) because of concerns it was deteriorating due to its watery surrounds. 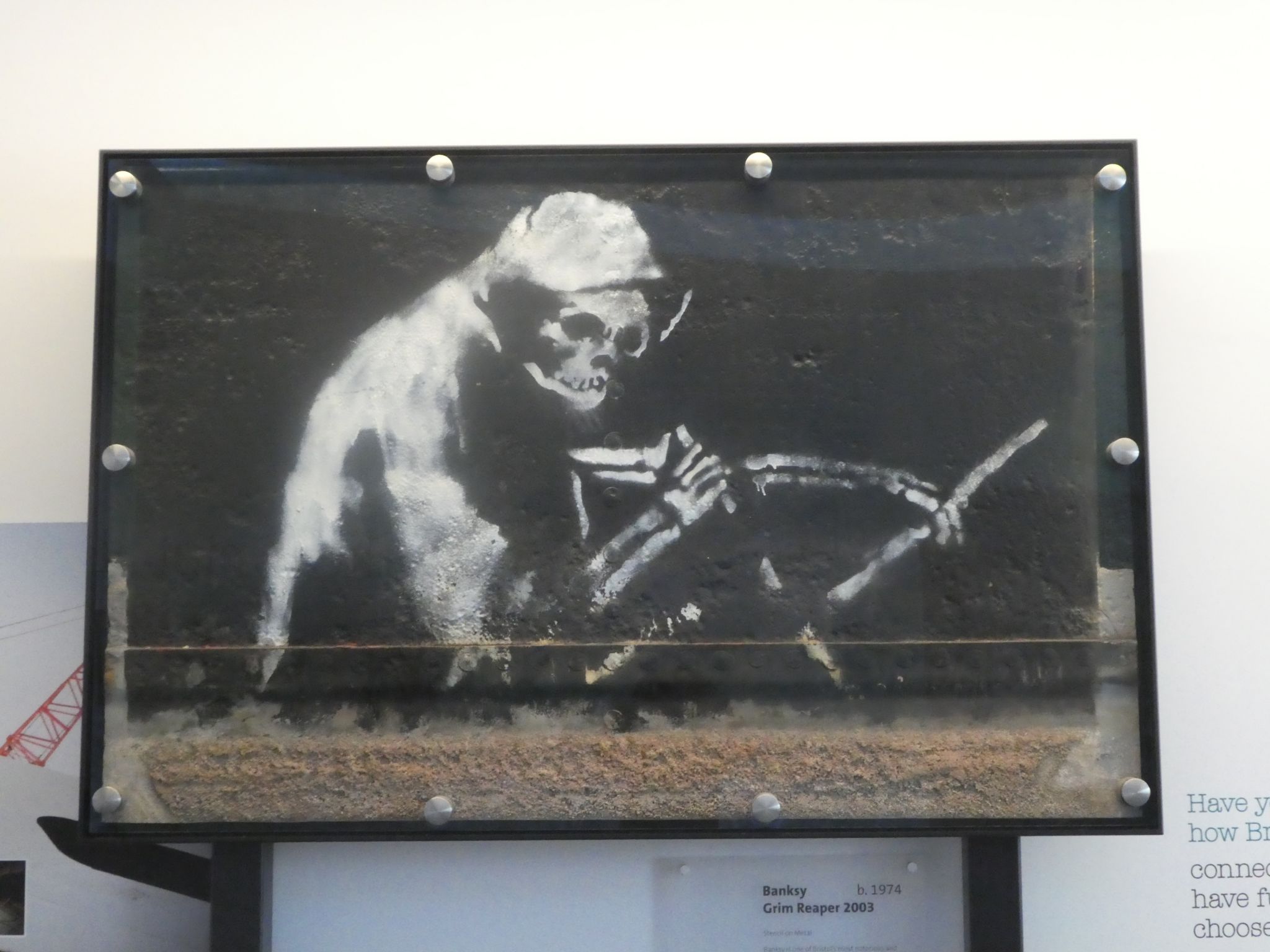 Banksy continues to assert that he must remain anonymous because at least some of his work breaches the law.  But its commercial value now means he is well and truly mainstream.  So much so that in 2009 Banksy collaborated with the Bristol Museum on an exhibition called Banksy versus the Bristol Museum.   The museum may not have foreseen this would include Banksy upending a tin of pink paint over the head of an angel at the entrance to the museum’s sculpture hall.  The exhibition is long gone, but Paint Pot Angel remains.  Desecration of an old statue?   Maybe, but it sure draws the crowds to this otherwise quite traditional gallery. 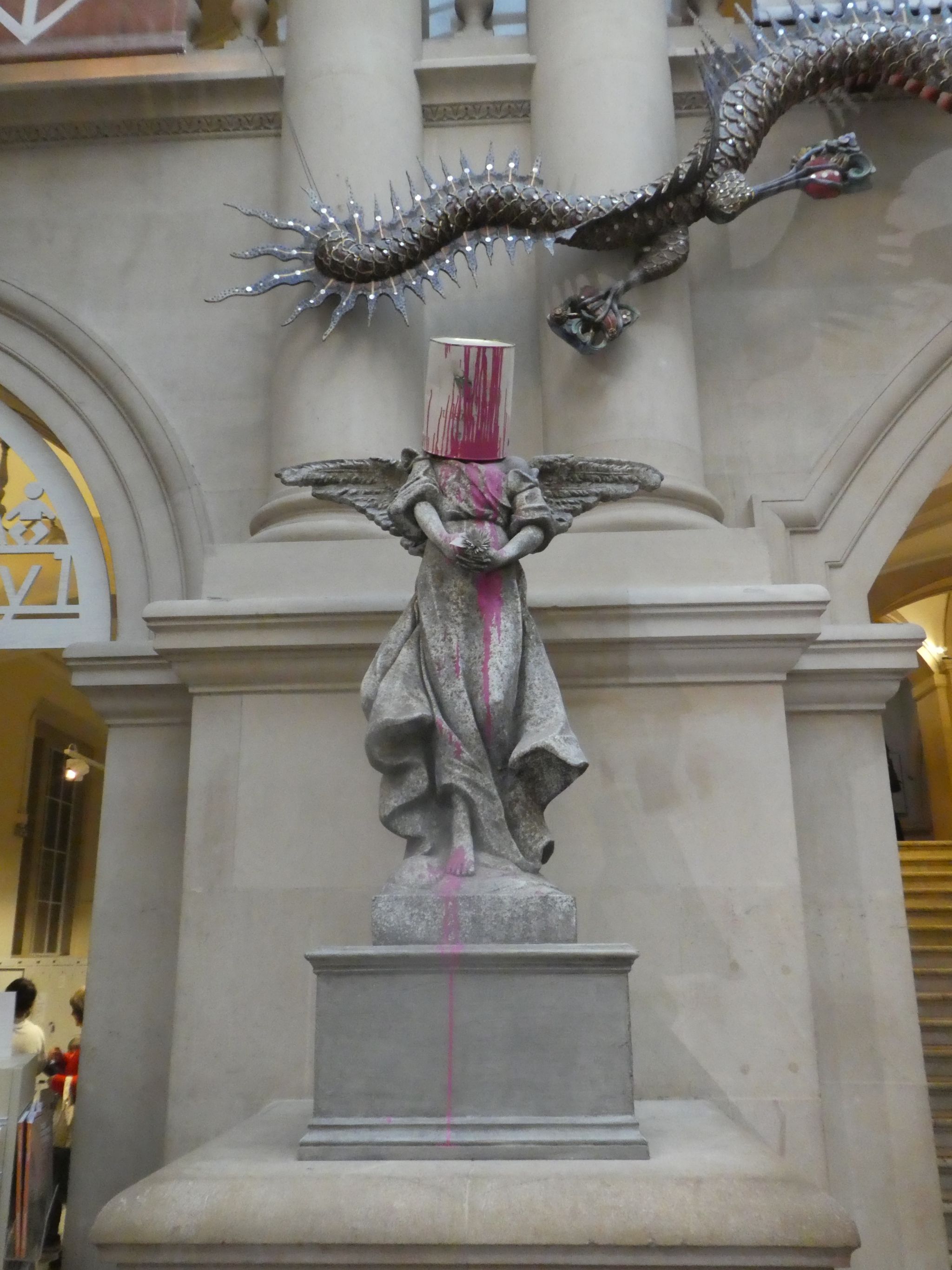 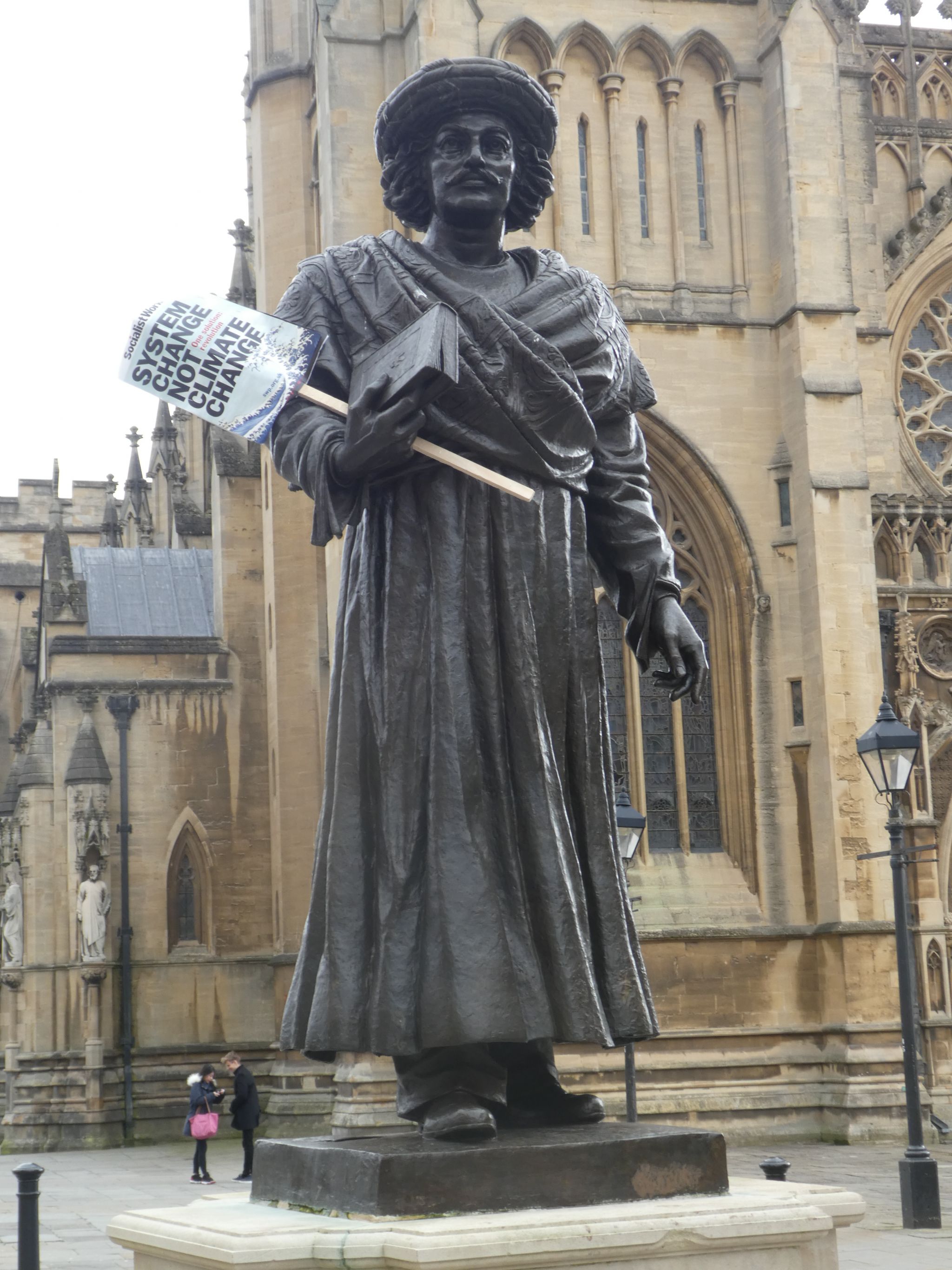 It came as no surprise that it was here that the first women priests in the Anglican Church were ordained. 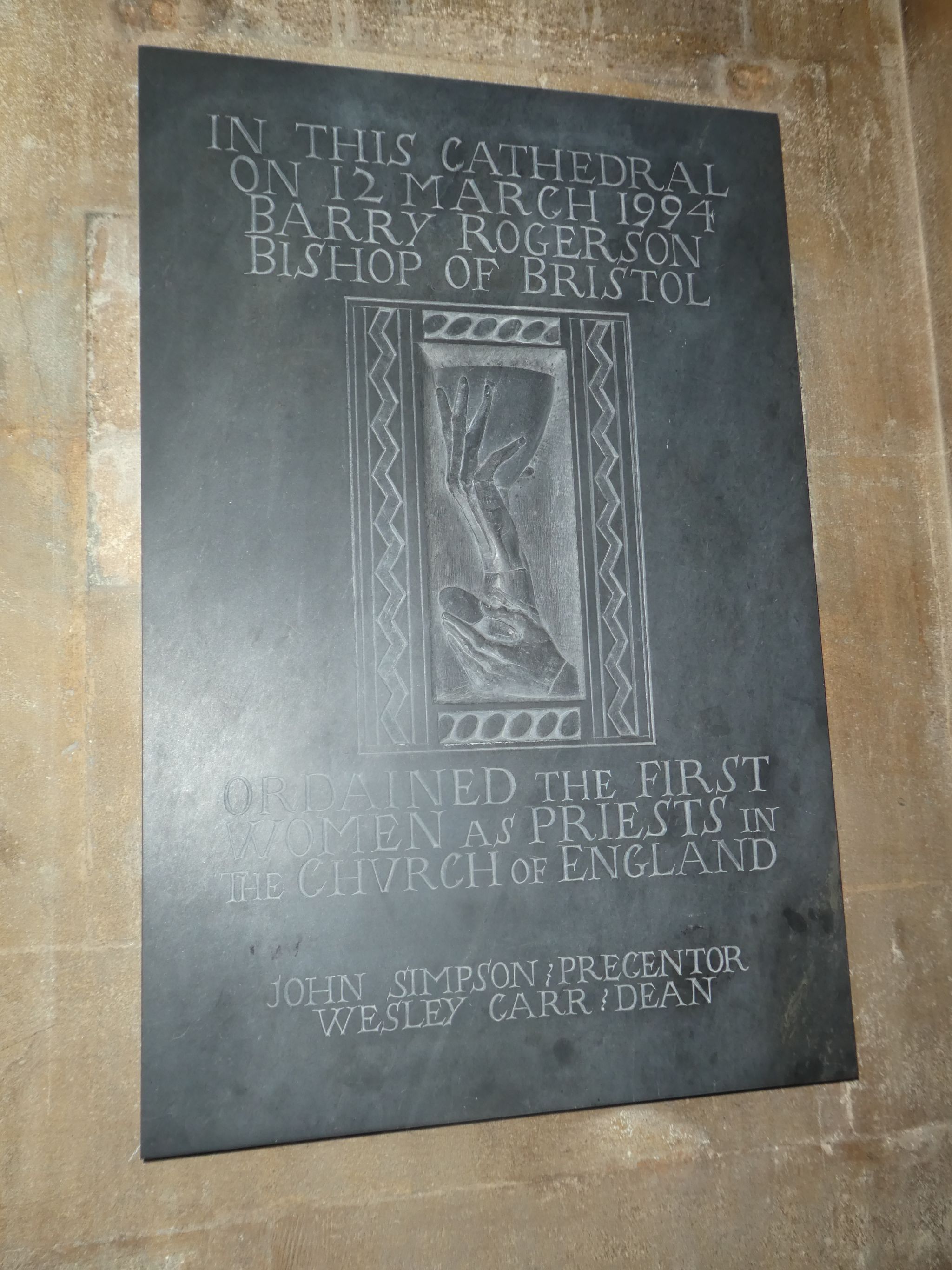 And the practice of social comment through graffiti is alive and well. 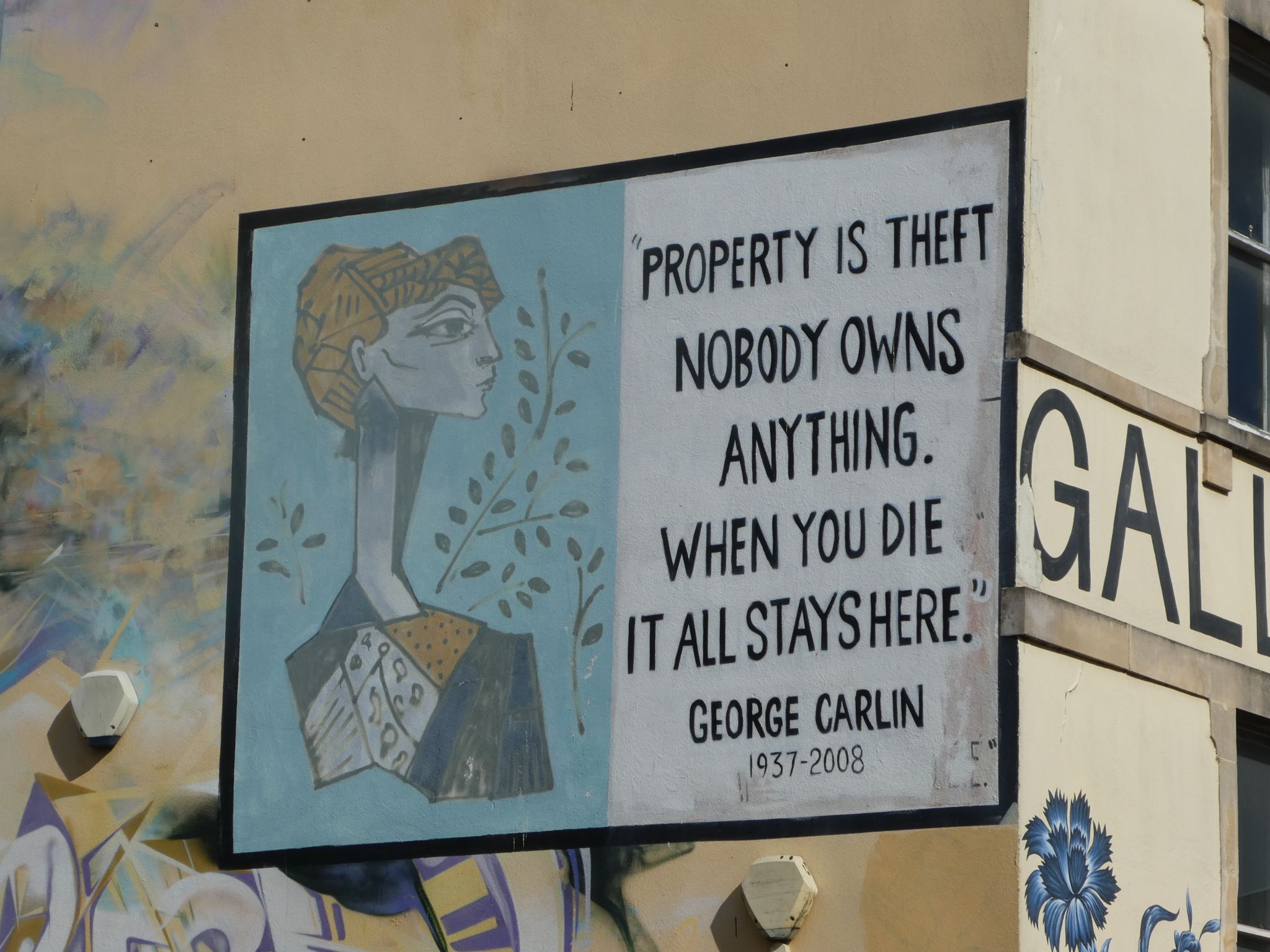 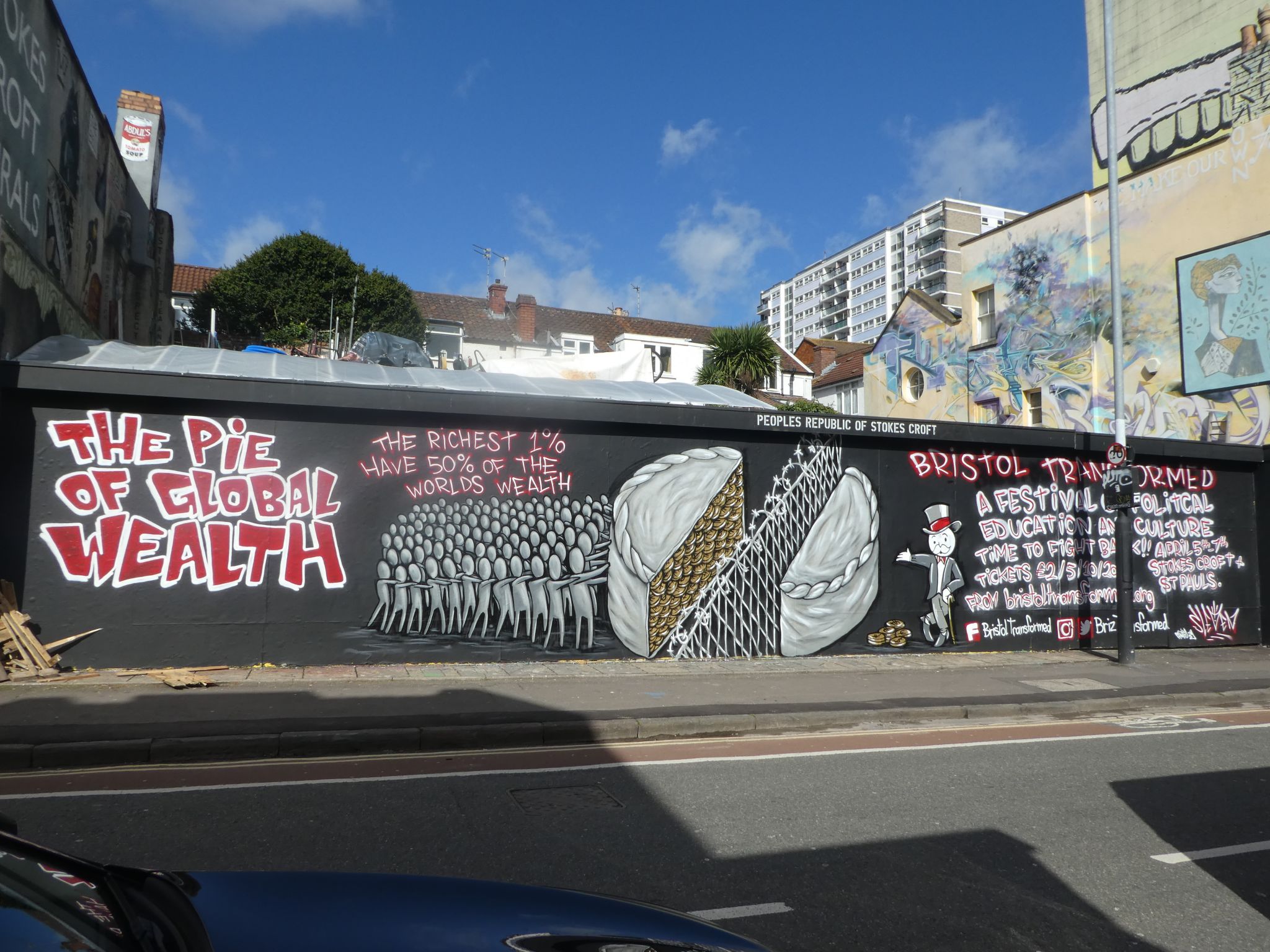 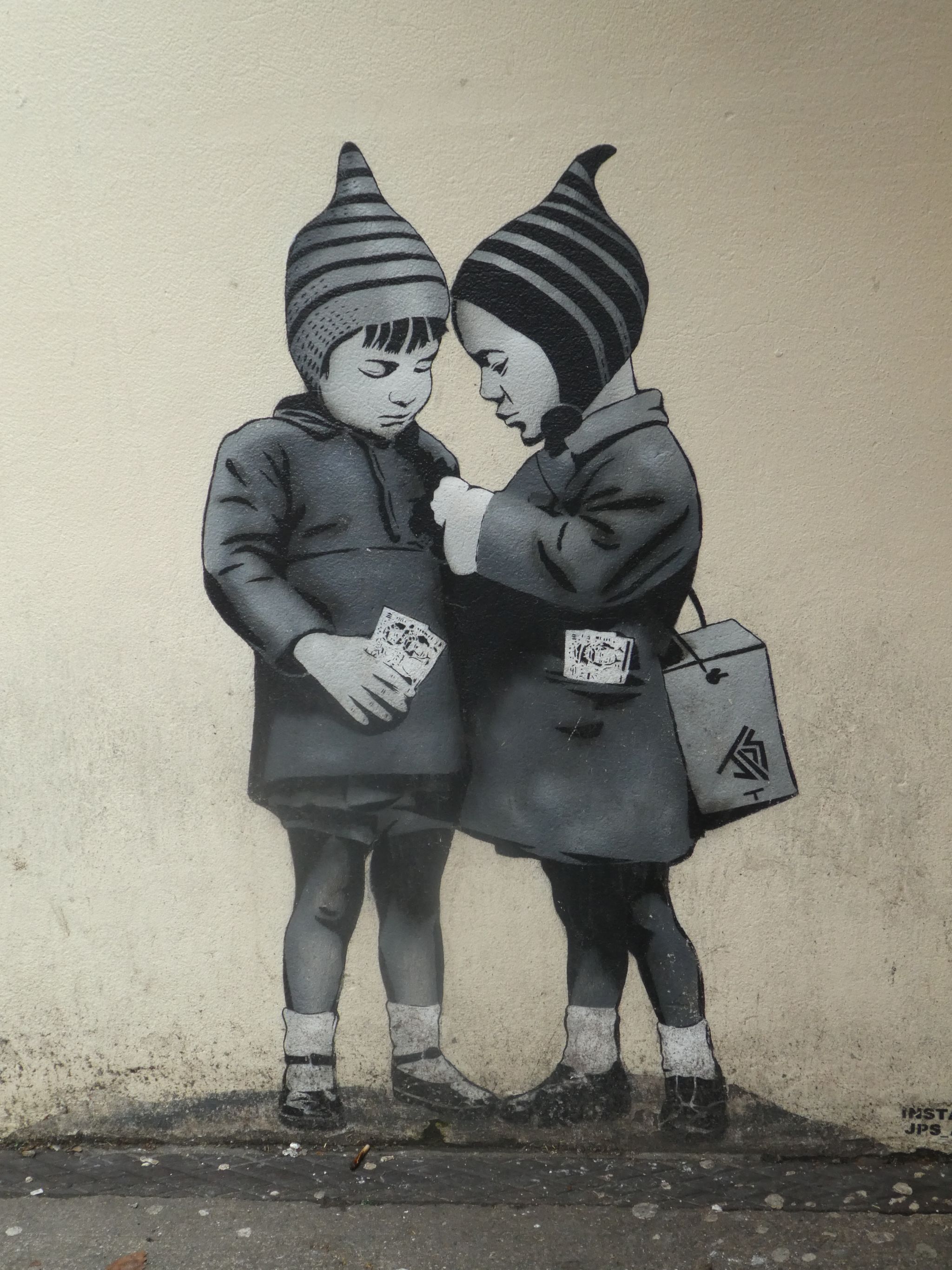 Even is Banksy isn’t your thing, Bristol is a great town for street art.  And whether you approve of his activities or not, it’s unarguable that Banksy has contributed to tourism in Bristol.