It doesn’t get any more posh than King’s College. 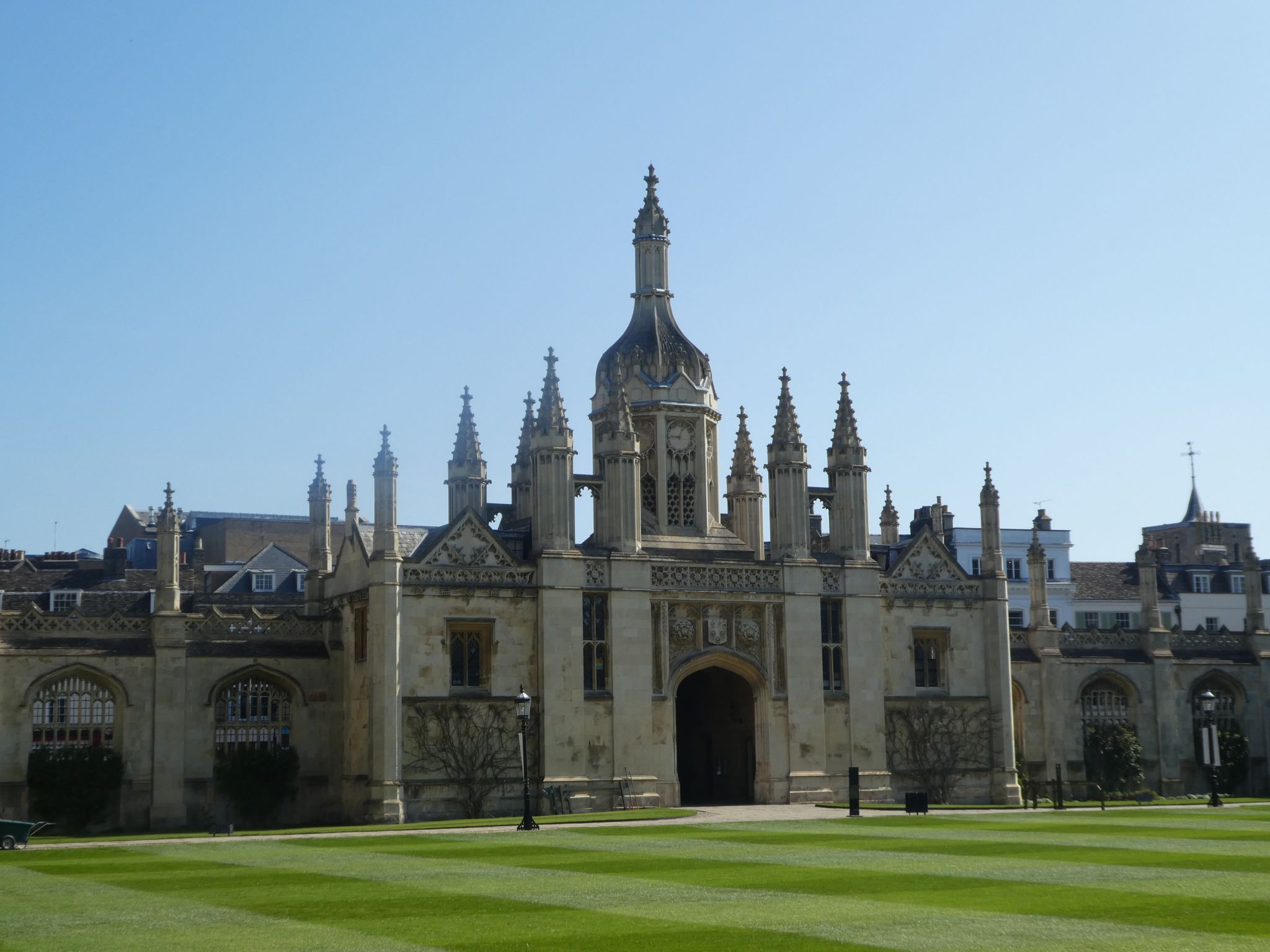 And in particular King’s College Chapel.  Usually the term ‘chapel’ connotes a small building.  Not this one.  Commissioned by King Henry VI in 1446 and finished 60 years later by Henry VIII, this chapel’s soaring 80 metre long, fan-vaulted ceiling is the world’s longest.  It’s an extraordinary Gothic masterpiece. 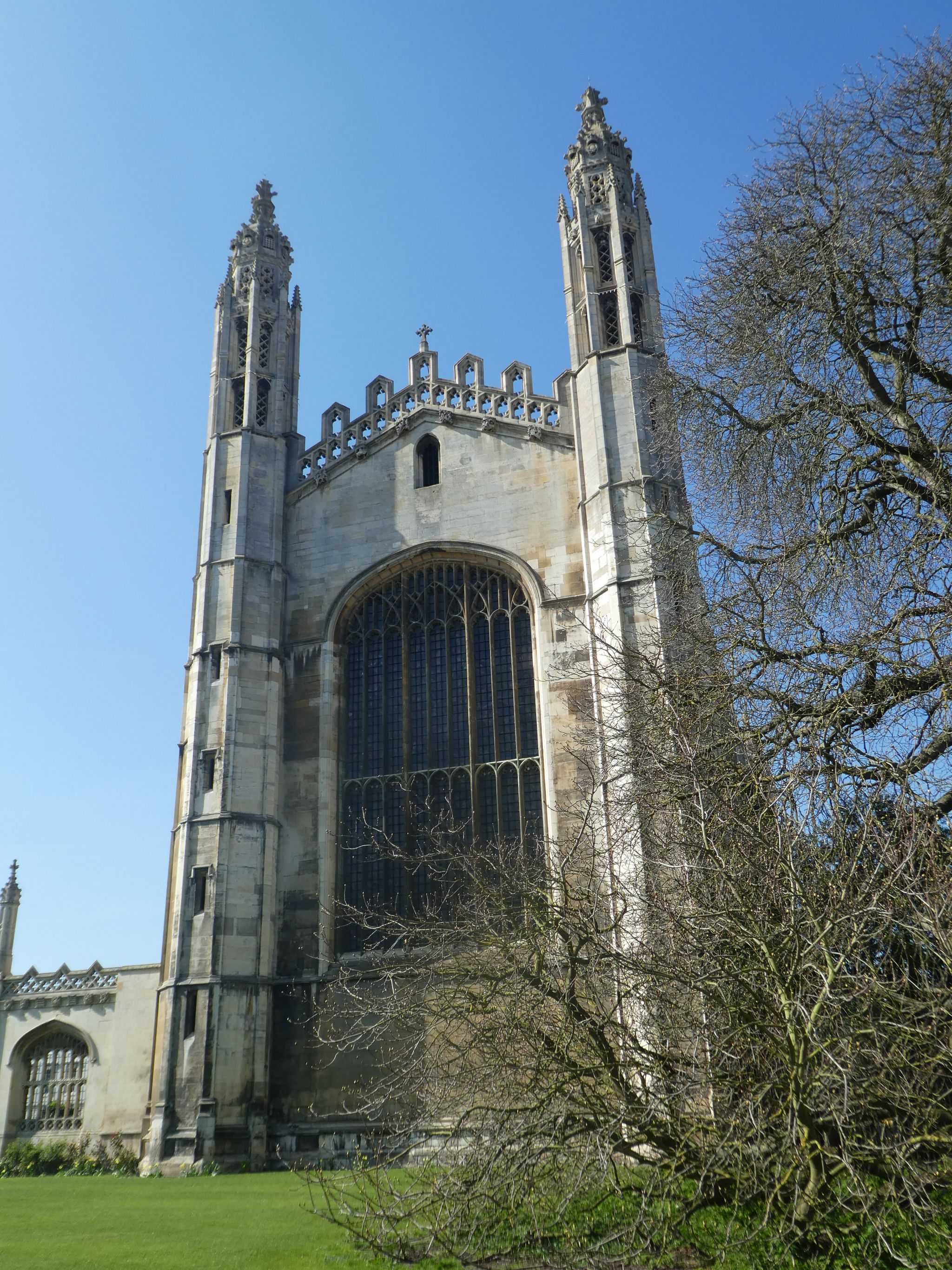 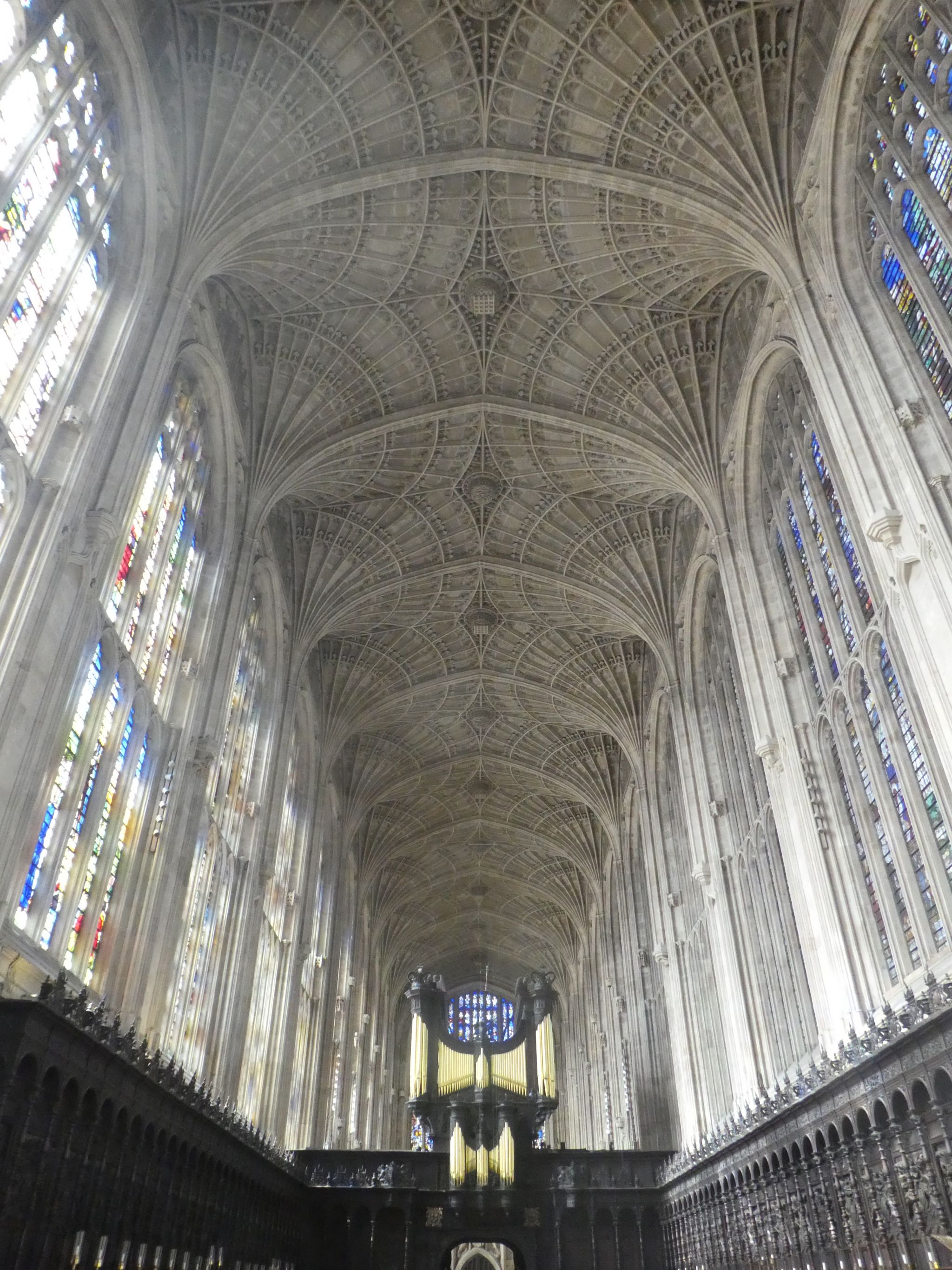 The magnificent stained glass windows are original.  Cambridgeshire was particularly ravaged during the English Civil War in the 1600s, but it is said that Oliver Cromwell, knowing of the windows’ beauty from his time as a student here, personally ordered that they not be harmed. 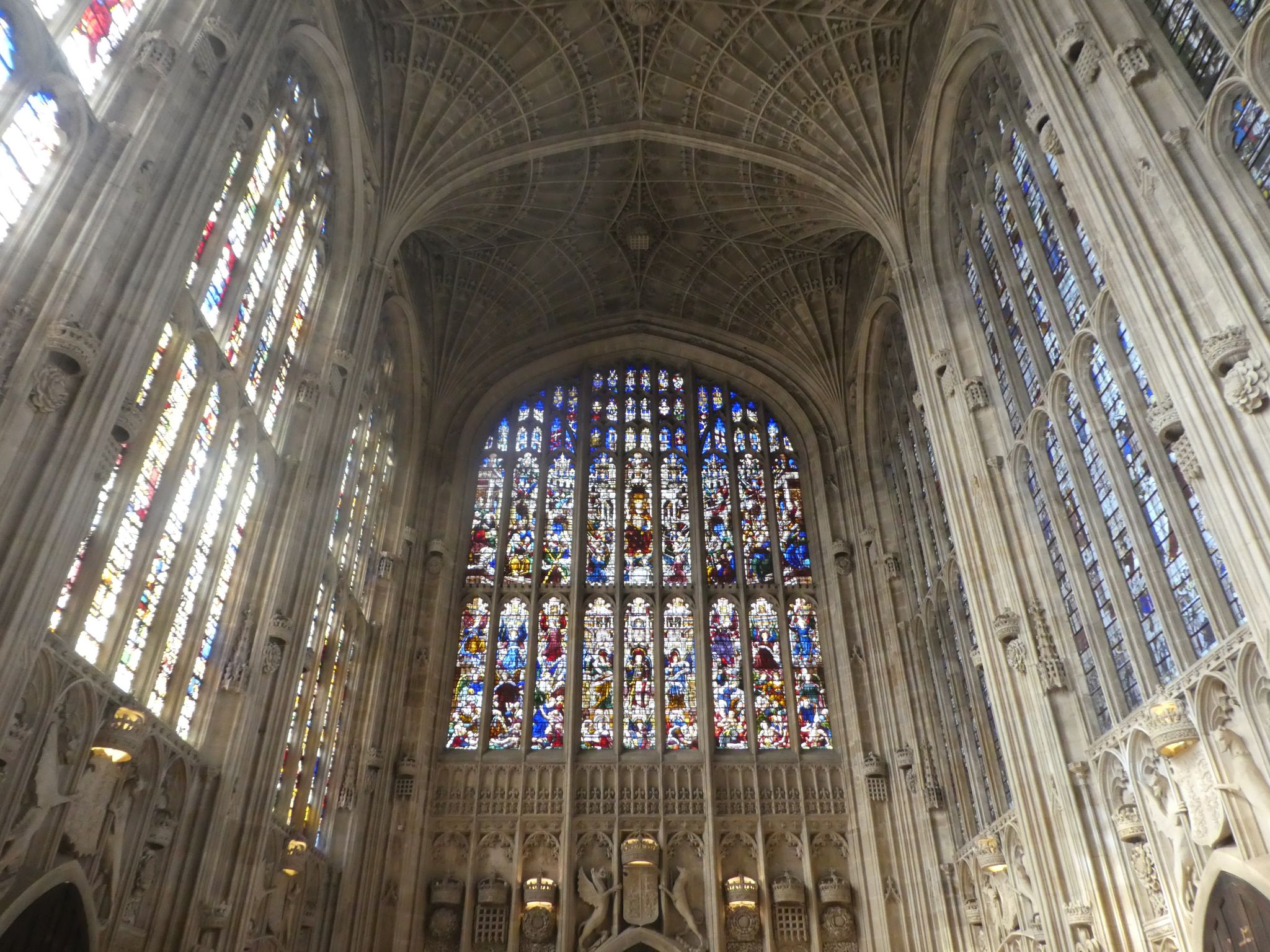 Just up the road, Gonville and Caius College boasts alumni including Howard Florey (discoverer of penicillin),  James Chadwick (discoverer of the neutron), Milton Friedman (economist)  and Francis Crick (one half of the duo who worked out how to decode DNA).  Stephen Hawkings was a fellow here until his death.

These days the college also has a display in its entrance portal celebrating what has to be one of the most elaborate student pranks ever.  In 1958, 12 students hoisted a Morris Seven onto the roof of Senate House, in the dead of night, using a winch designed by their ringleader, an engineering student.

To the amusement of onlookers the next day, all attempts by relevant authorities to construct a crane to hoist the car down, failed.  Police, the fire brigade and civil defence units tried for almost a week, before being forced to cut up the car with a blowtorch and bring it down in pieces. 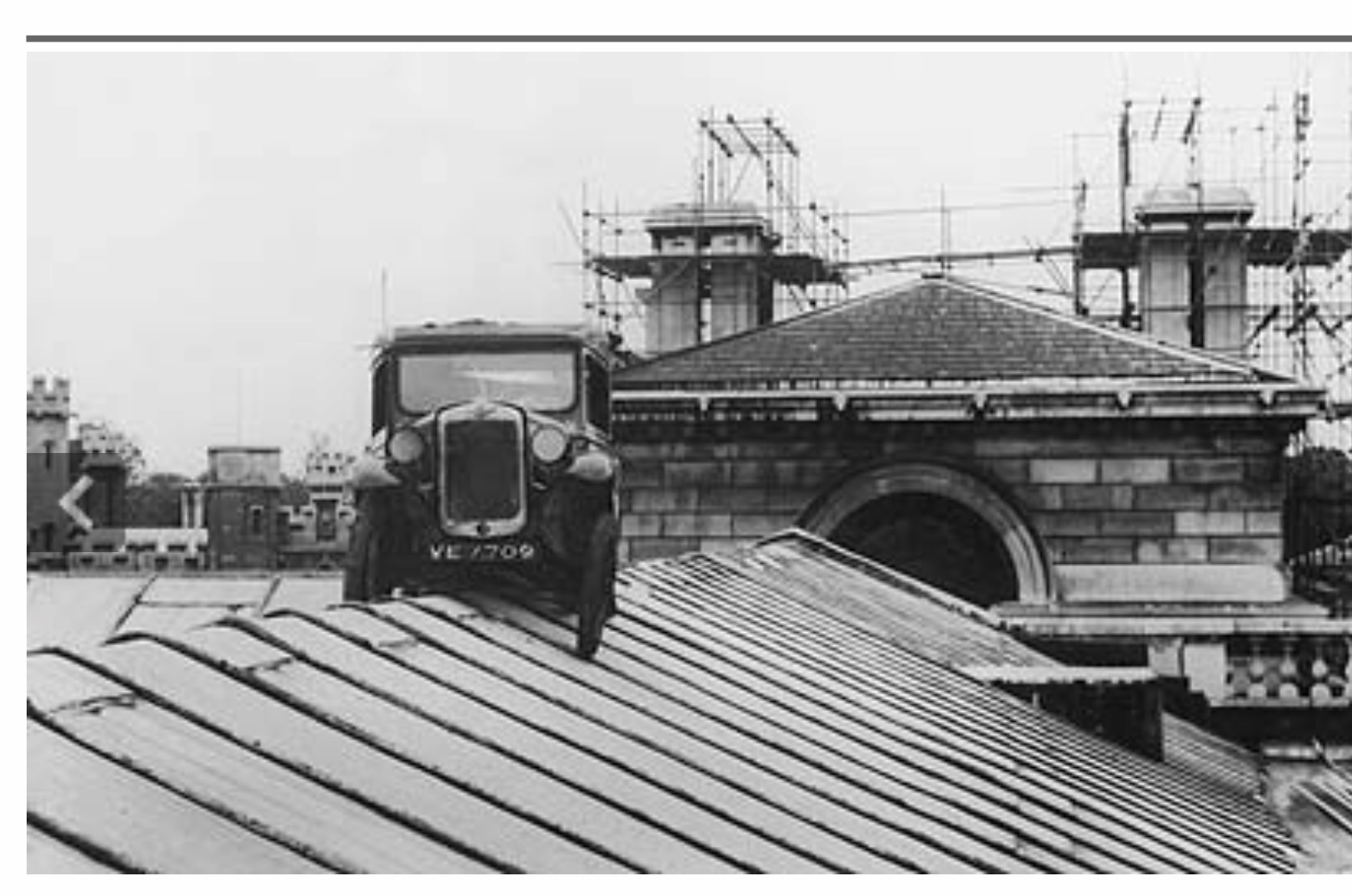 The college has come a long way since the 1500s when John Caius, as Master and significant donor to the college enshrined in the college rules that the college must not admit any student who is “deformed, dumb, blind, lame, maimed, mutilated, a Welshman …”.  Not sure what he had against Welshmen.

Next up is Trinity College, Cambridge’s biggest.

As kids we were taught that Sir Isaac Newton discovered gravity after an apple fell on his head, causing him to question why things always fell downwards.  Part truth, part myth, Sir Isaac did once say that seeing an apple fall from a tree at his family home in Lincolnshire set him thinking on the topic.  An apple tree growing beneath the window of Newton’s room at Trinity is said to be a descendant of that very famous tree. 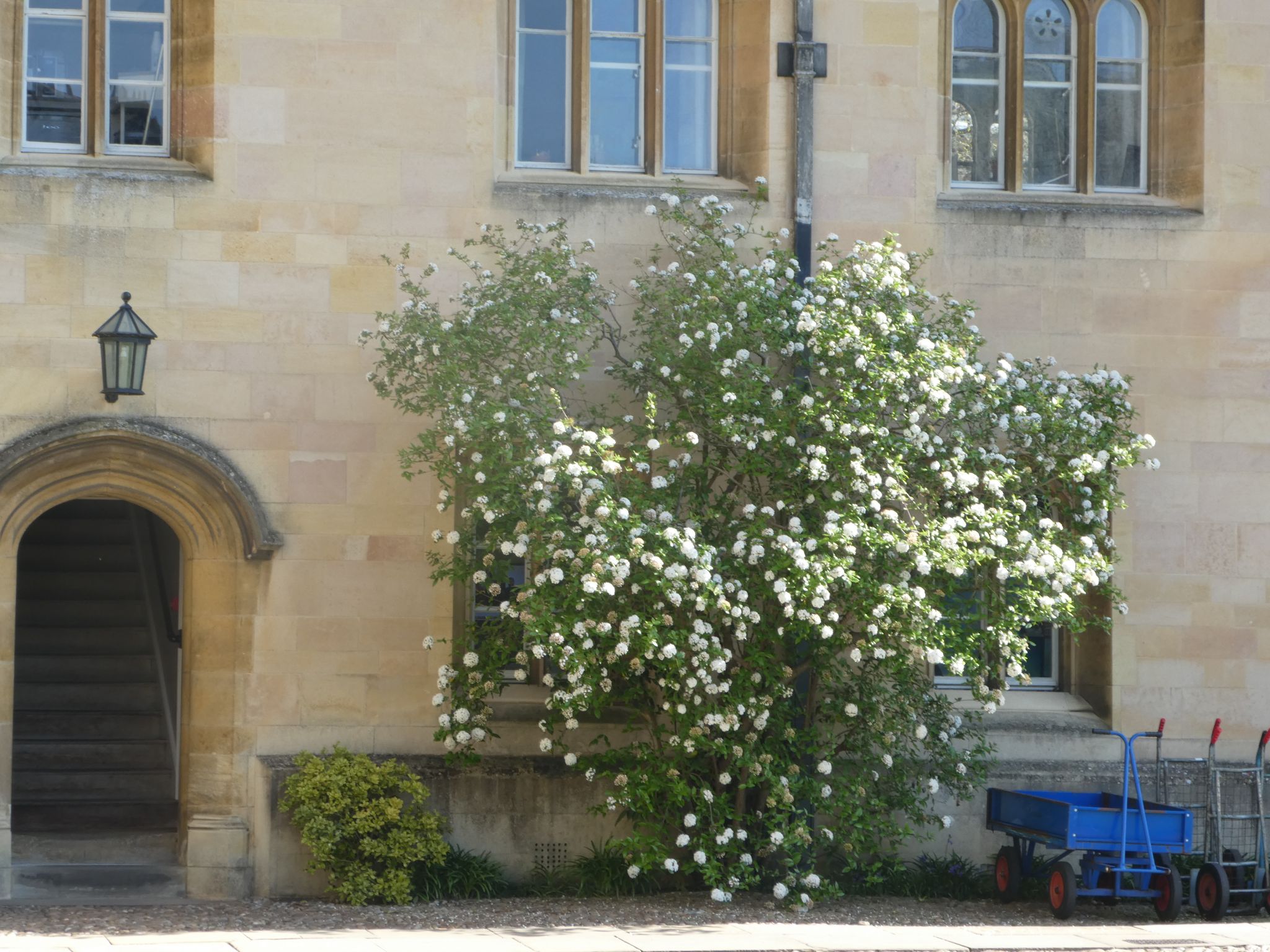 Mind you, there are also descendants of the tree at York University, MIT, the Bariloche Institute in Argentina and some place called Goobang in Australia.

Other alumni of Trinity include Sir Francis Bacon, Lord Byron and Lord Alfred Tennyson.  Prince Charles obtained a lower second class BA here.  It is rumoured that his bodyguard got better grades.  At least that might mean Chuck did all his own work!

Trinity was founded by Henry VIII.  The gate over the entrance honours him with a grand statue.  In one hand Henry holds a golden orb.  In the other, he once held a sceptre.  Now he holds a wooden chair leg.  You might assume this was another student prank, but no.  Although no one knows what happened to the original sceptre, apparently a window cleaner noted it was missing and, for a laugh, climbed out and put the chair leg in the space.  That was in the early 1980s and it remains there to this day. 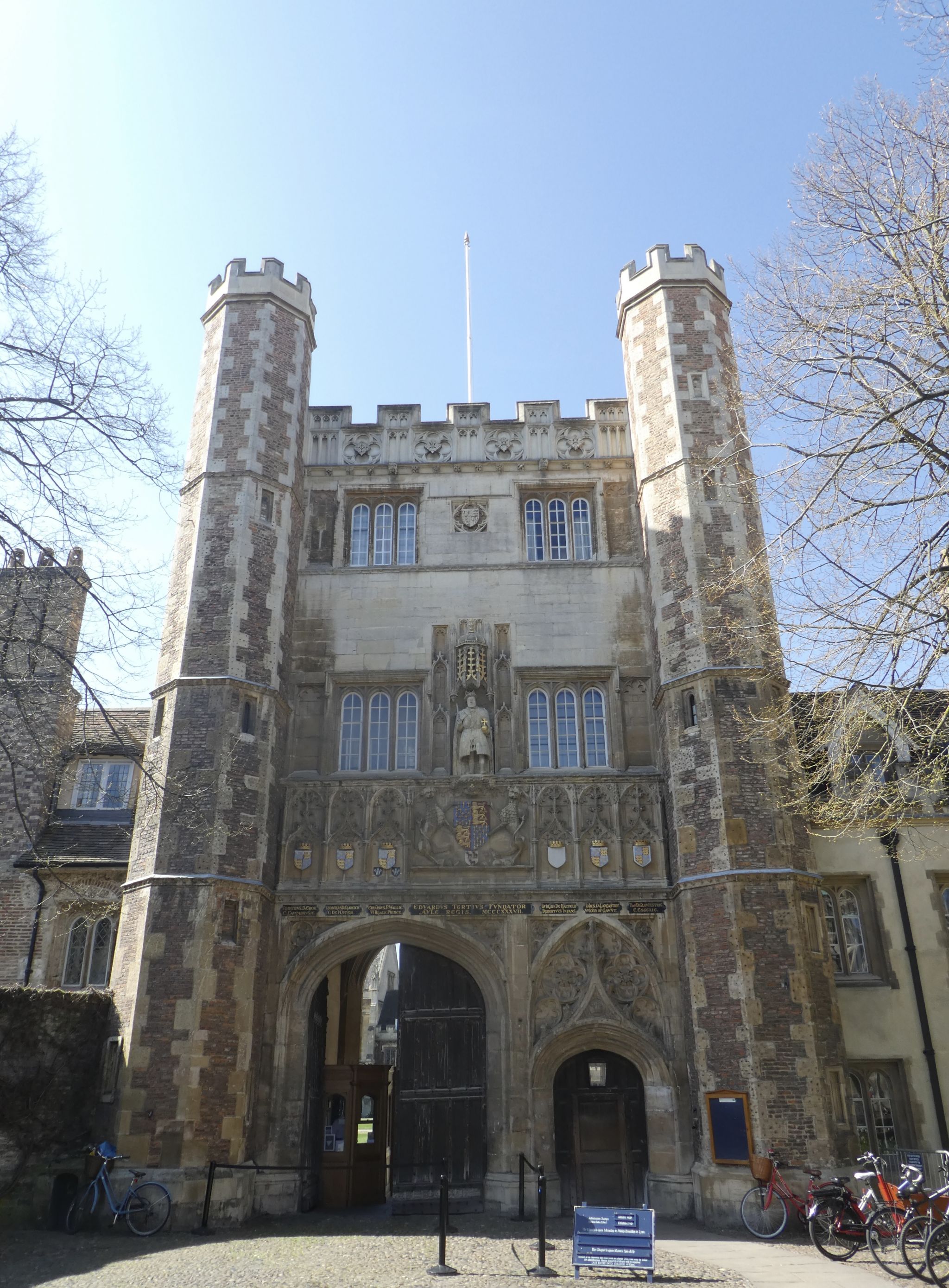 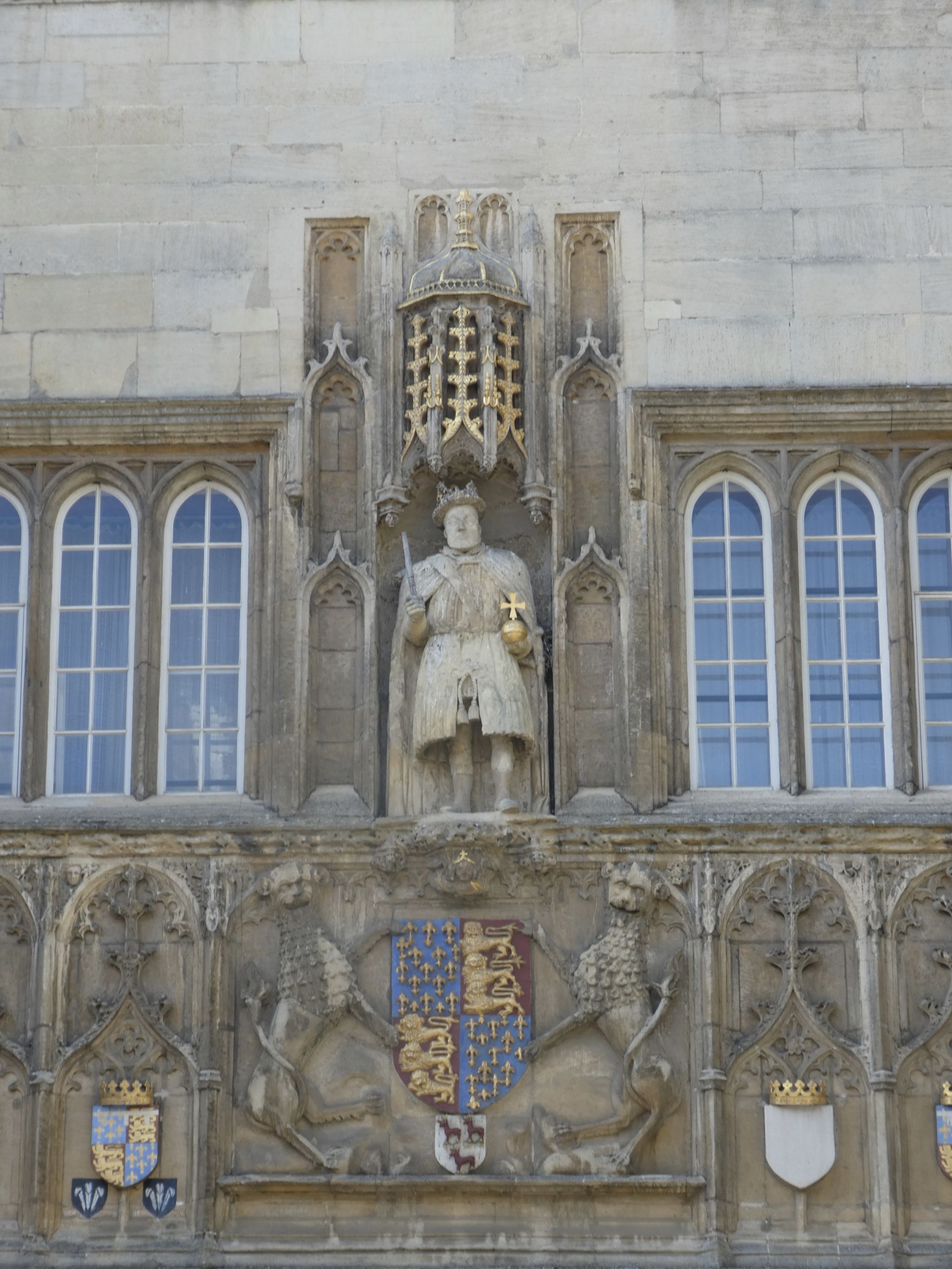 Cambridge’s second largest college, St John’s, is yet another testament to the skills of the green keepers of England. 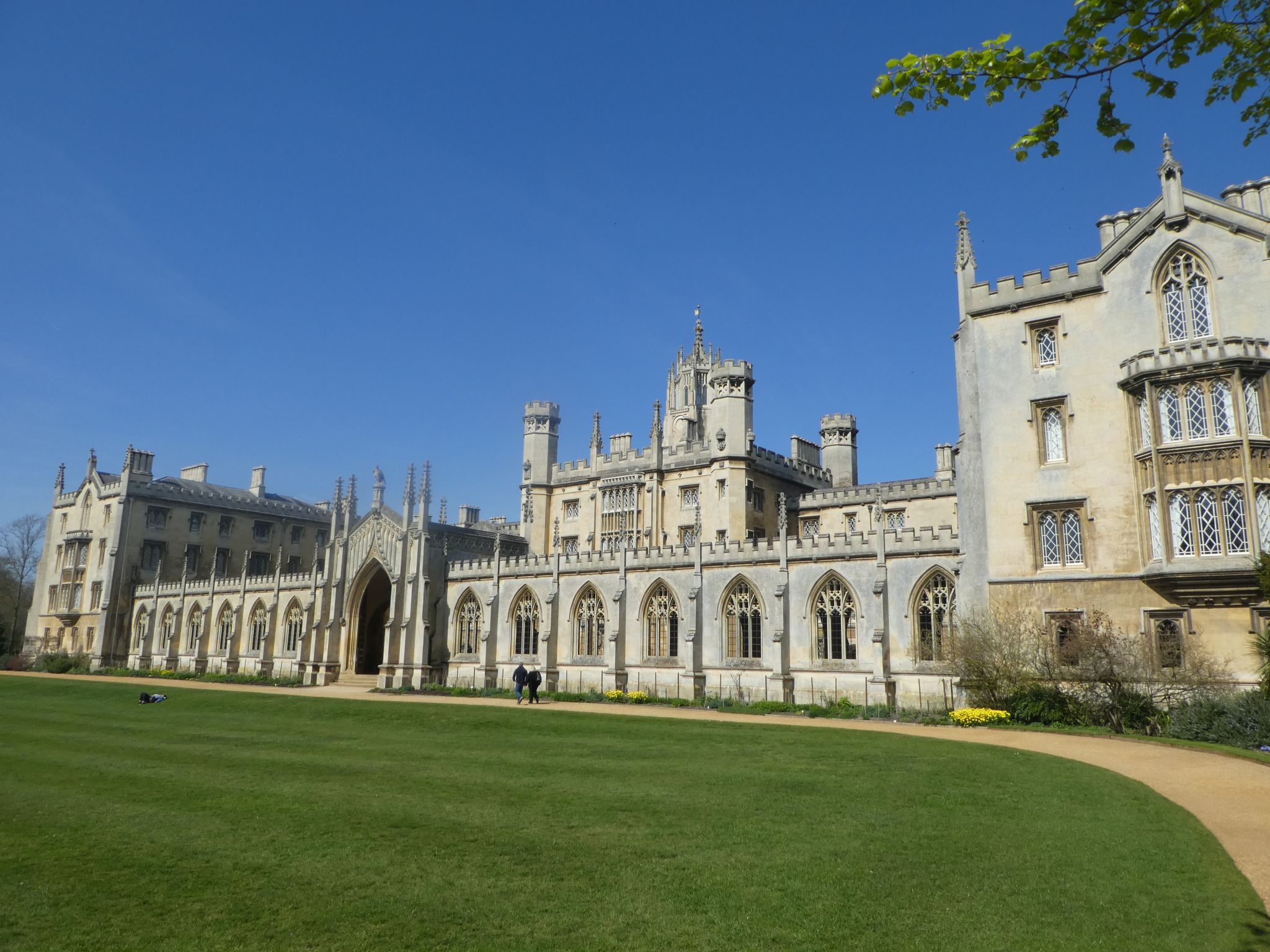 It is also the site of the beautiful Bridge of Sighs.  Venice has one, Oxford has one, and St John’s has one.  Twice in the 1960s, students achieved the prank of lashing several punts together to form a barge, driving a car onto it, punting up the river and then suspending the car under the bridge.  St John’s has graduated no less than six Prime Ministers.  Yes, the kind of people who dream up stunts like this, are the ones who end up running the UK.  Suddenly, Brexit makes a lot more sense. 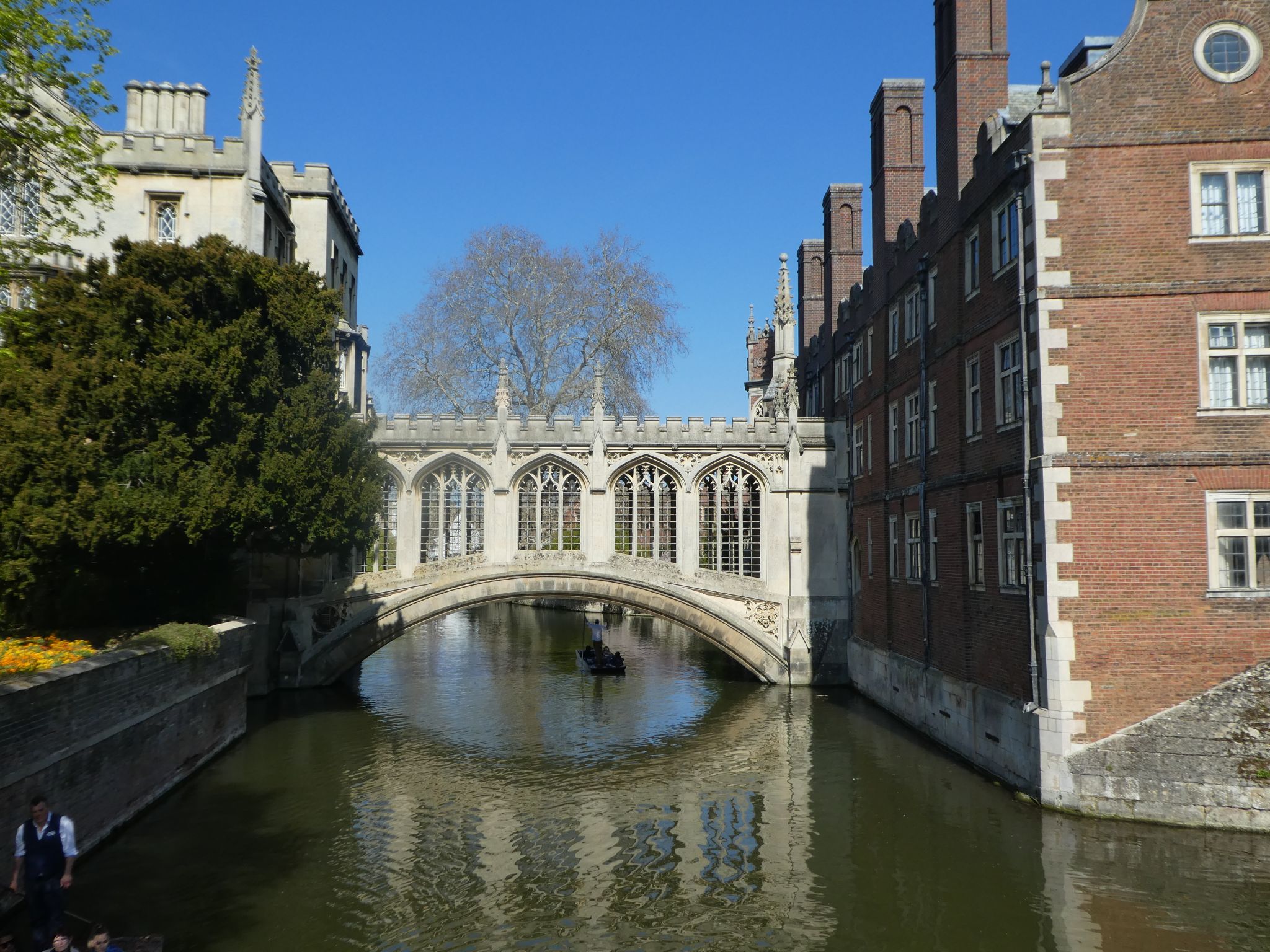 Behind the colleges you can take a pleasant stroll along the Backs, a series of gardens and parks that line the Cam River behind the colleges.  There are lovely views of the college buildings and the various bridges over the river are often works of art in themselves.

This is the Mathematical Bridge, which joins the two parts of Queens College.  There’s lots of myths abut the bridge, including that it was designed by Sir Isaac Newton, that it was built entirely without nails, and that academics once took it apart and then couldn’t work out how to put it back together.  Sadly, none of these stories are true.   But the bridge is rather quirky. 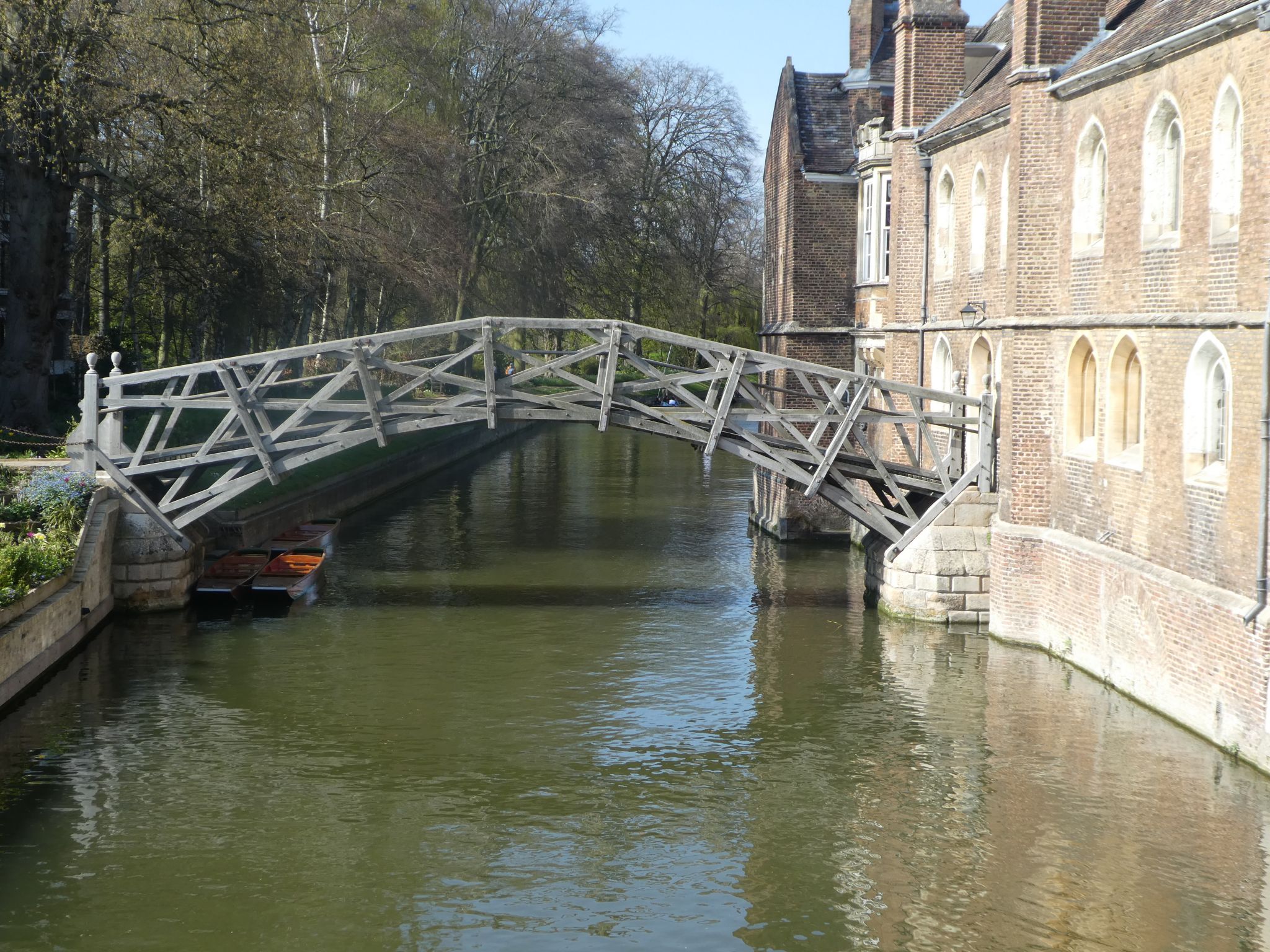 The area around the colleges at Cambridge is largely pedestrianised, with cobbled streets and lots of ancient nooks and crannies.  It has that timeless, genteel, quintessentially ‘English’ feel.  But as anyone who watches British crime shows knows, genteel English towns can be dangerous.  So we were amused to find that Cambridge has it’s very own Midsummer Common.  Don’t venture here after dark! 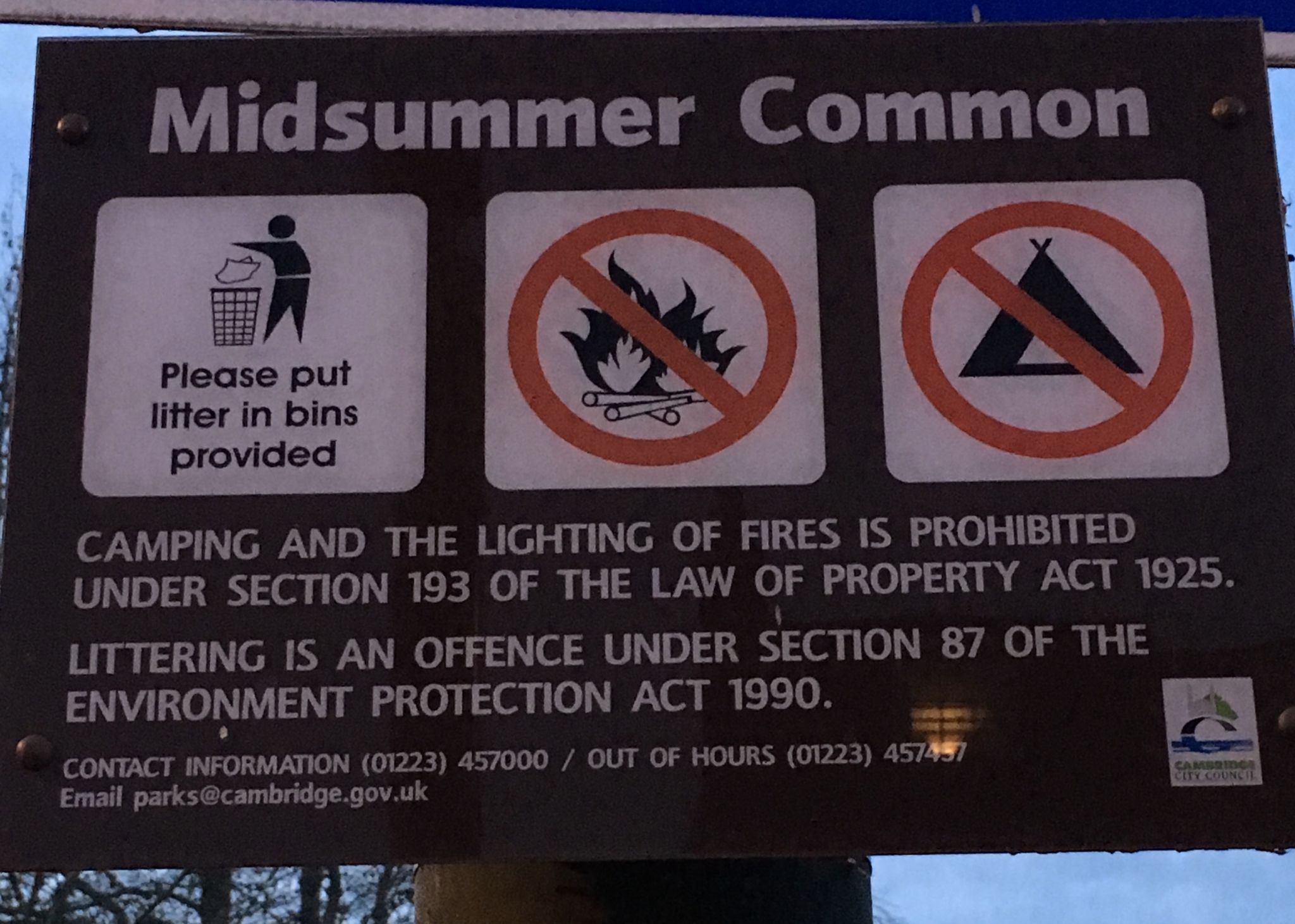 If you are tired of breathing the rarified air of Cambridge and wondering if the scruffy student at the next table in the cafe may be a future Prime Minister,  you can take a trip out to the Imperial War Museum, Duxford.

Julie’s views on air museums are a bit like John’s views on monasteries – if you’ve seen one Concorde, you really don’t need to see another one.  So she was terribly enthusiastic about heading off to Europe’s largest aviation museum.  Over 200 fully restored vintage aircraft in one place.  Imagine the excitement!

Well, actually the museum has some really good stuff.  Best of all is the American Air Museum which has a fantastic series of displays, each telling the story of a particular person – usually an ‘ordinary’ serviceman or woman – with an audio of them describing their experiences in the war.  Together they make up a picture of WWII from many different perspectives and service roles.

And if you haven’t seen a Concorde, yes, there is one. 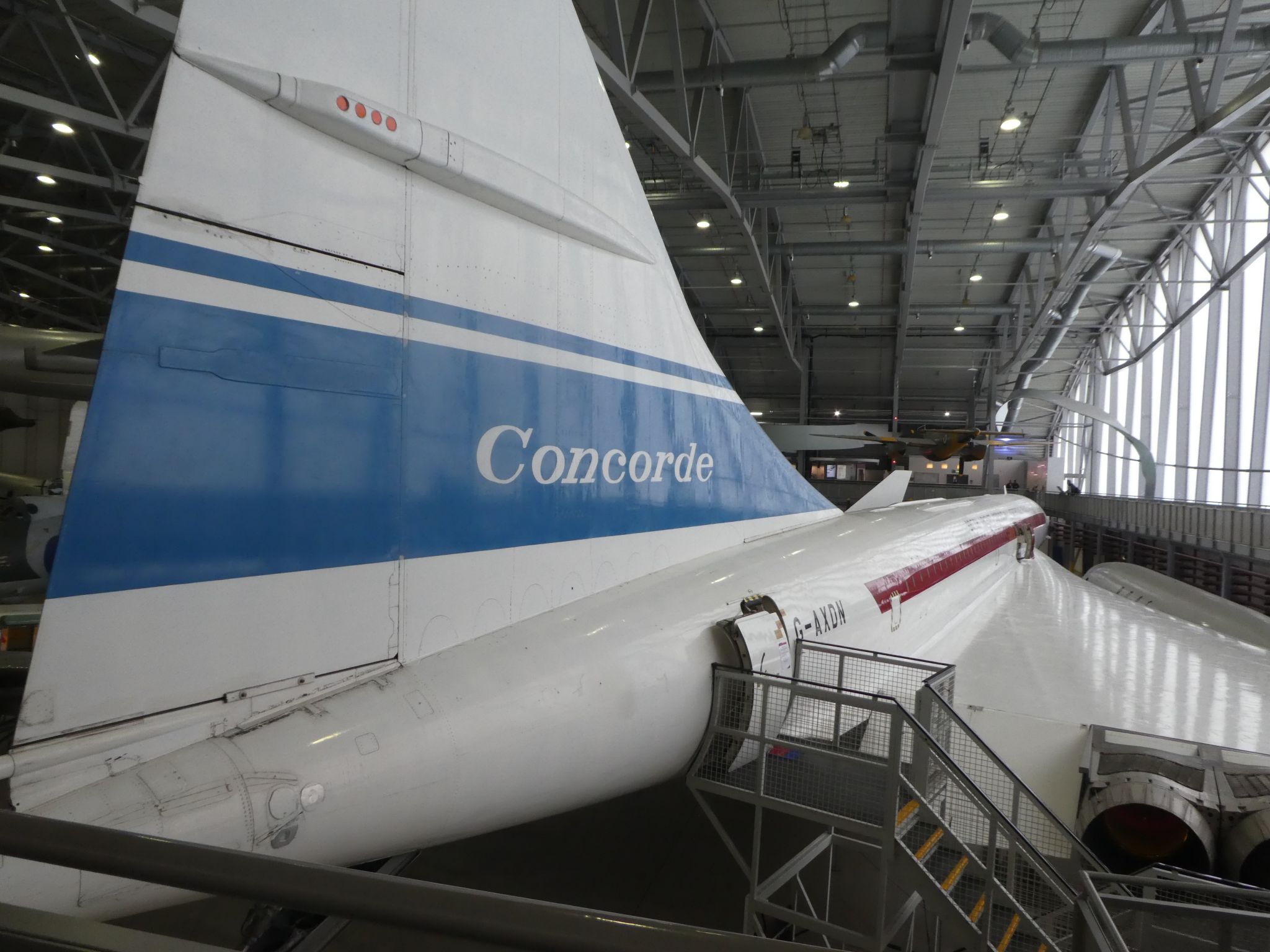 Mission accomplished.  Next up, off to Liverpool for some Beatlemania.