Nicosia is a city divided.

It’s complicated, but we will try and be brief.

Over the next few years, inter-community violence escalated.

In 1964 the United Nations sent a peacekeeping force led by Major General Peter Young, a Brit.  In an attempt to control sectarian violence in Nicosia, Young took a map and drew a line through the centre of the city, delineating a Greek sector and a Turkish sector.  He happened to use a green pen, and the line became known as the Green Line.  A buffer zone with barricades and barbed wire was built along the Green Line, splitting neighbourhoods and closing streets.  Commercial and residential buildings in the buffer zone were compulsorily emptied, and many whose ethnicity put them on the ‘wrong’ side of the line were pushed to relocate.

Intended as a temporary measure to restore peace, the Green Line remains in place today, policed by the UN.  It was and is completely arbitrary.  In some places it literally divides buildings in half. 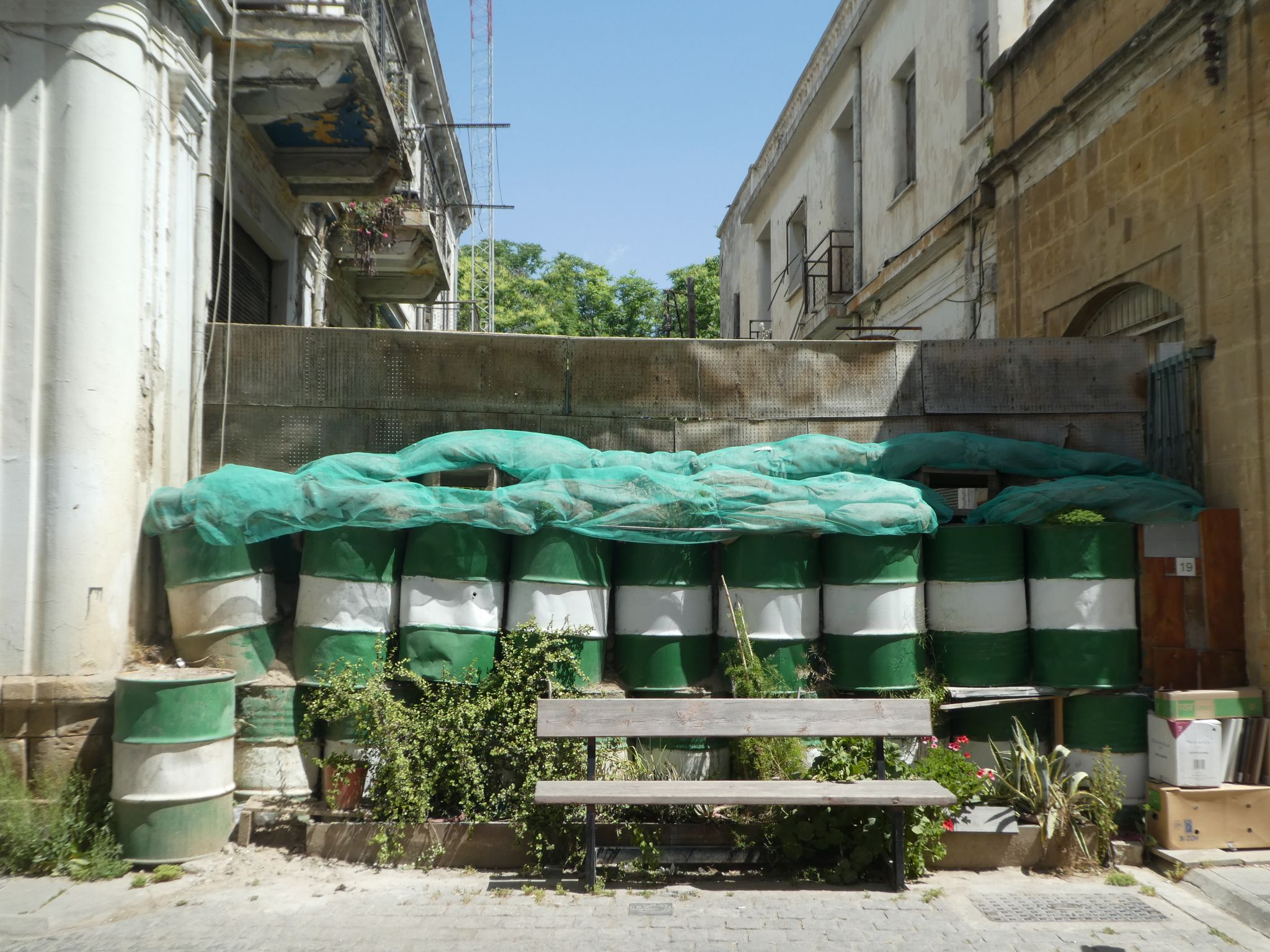 It runs through the Roccas Bastion, part of the fortress walls built by the Venetians in the 1500s.  Walls built to protect the ancient city, now used to divide the modern one. 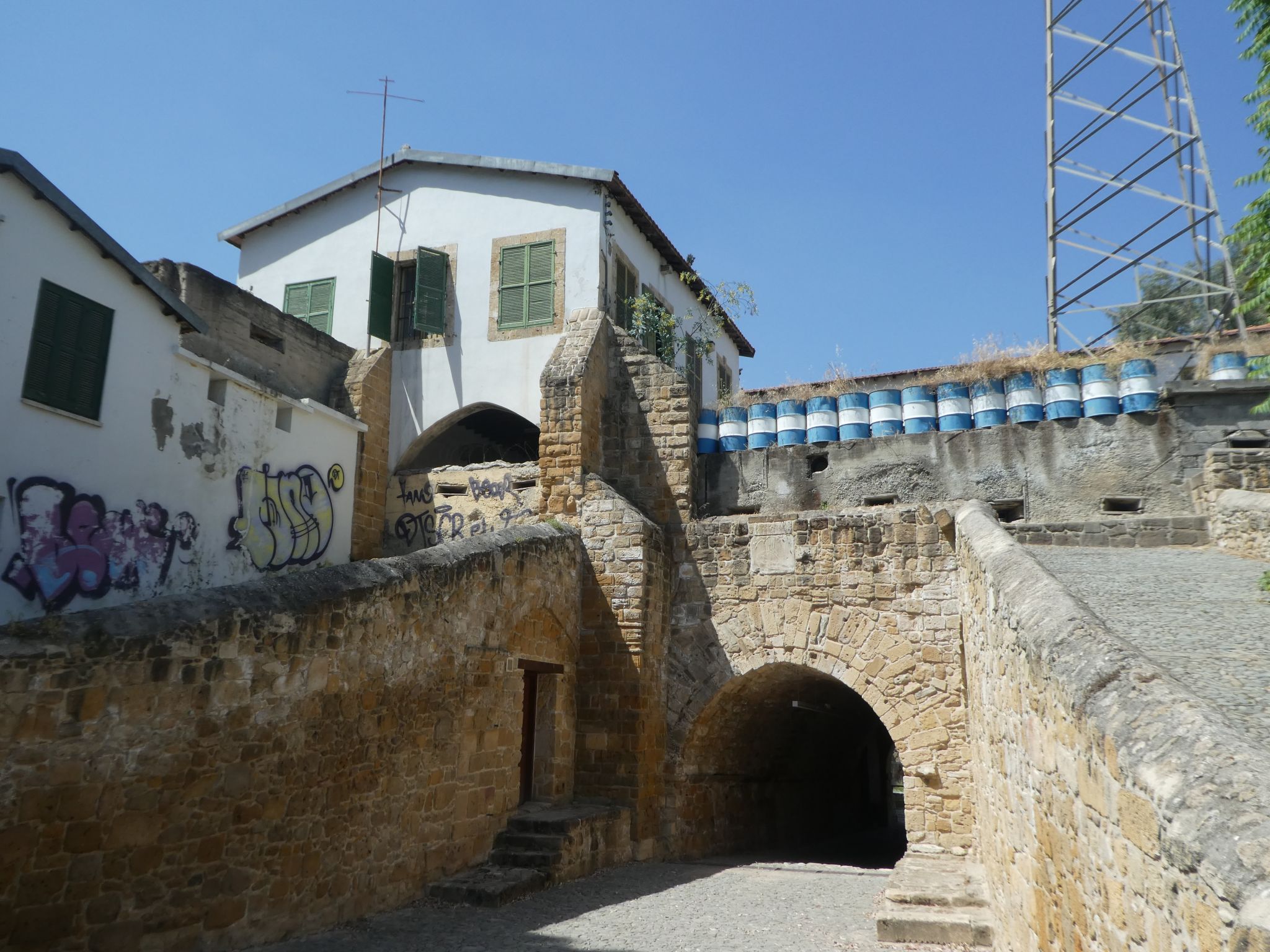 In 1974, after a failed coup orchestrated by radicals from the Greek mainland, Turkey invaded – or liberated, depending on your politics – northern Cyprus, occupying 37% of the island before being halted by the UN and diplomatic efforts.  The Green Line was extended across the whole island, dividing the country in two. 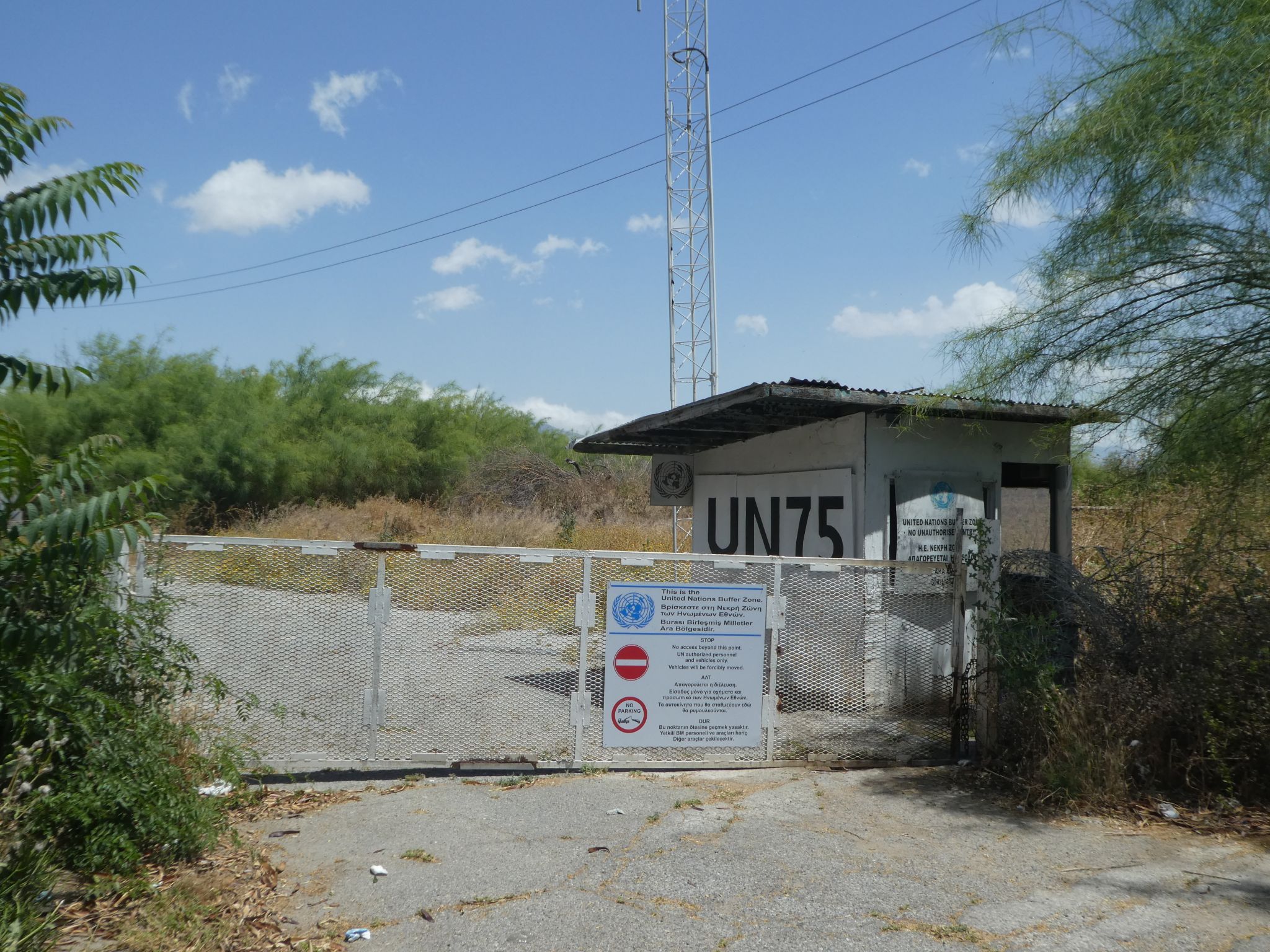 The Republic of Cyprus continues to assert the island is one nation, with Nicosia the capital.  That is the position of the UN and the world community, but the reality on the ground is that the Republic has no control over the area of the country north of the Green Line.  A seperate Turkish Republic of Northern Cyprus was declared in the north in 1983, with the Turkish sector of Nicosia as its capital.  It is propped up financially by Turkey, which is the only country to recognise it.

As for Nicosia, the heart of the city is the snowflake-shaped area bounded by the Venetian walls, and most sites of interest to tourists are here.  The Green Line sliced right through the old town, cutting the snowflake in two.

The southern ‘Greek’ sector of the old city faltered economically after partition but a lot of work has been done in recent years to regenerate the area.  There’s some buzzy bars and restaurants, good shopping and historical buildings are being restored.  There’s a clutch of tidy orthodox churches and even a couple of good looking mosques. 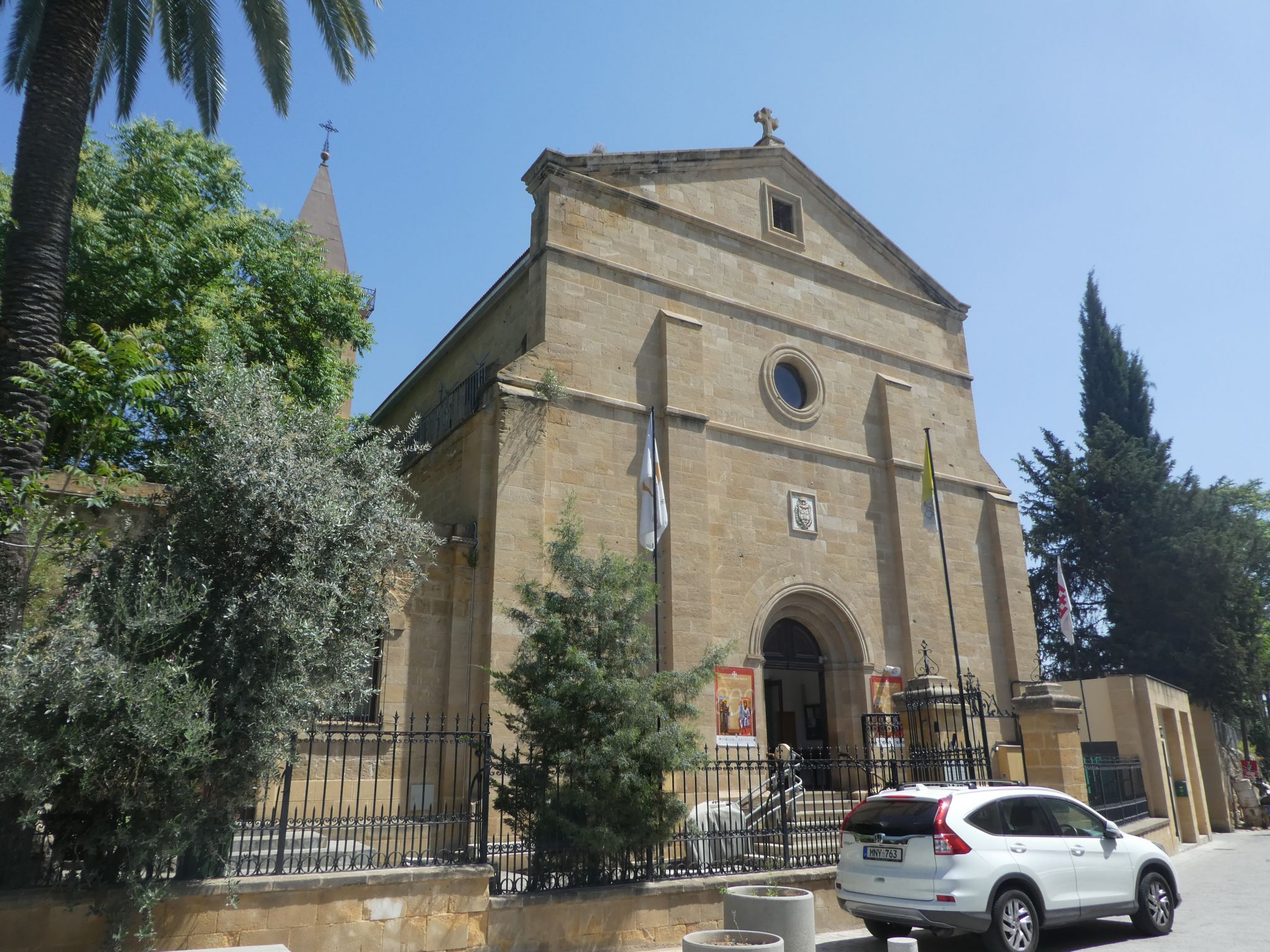 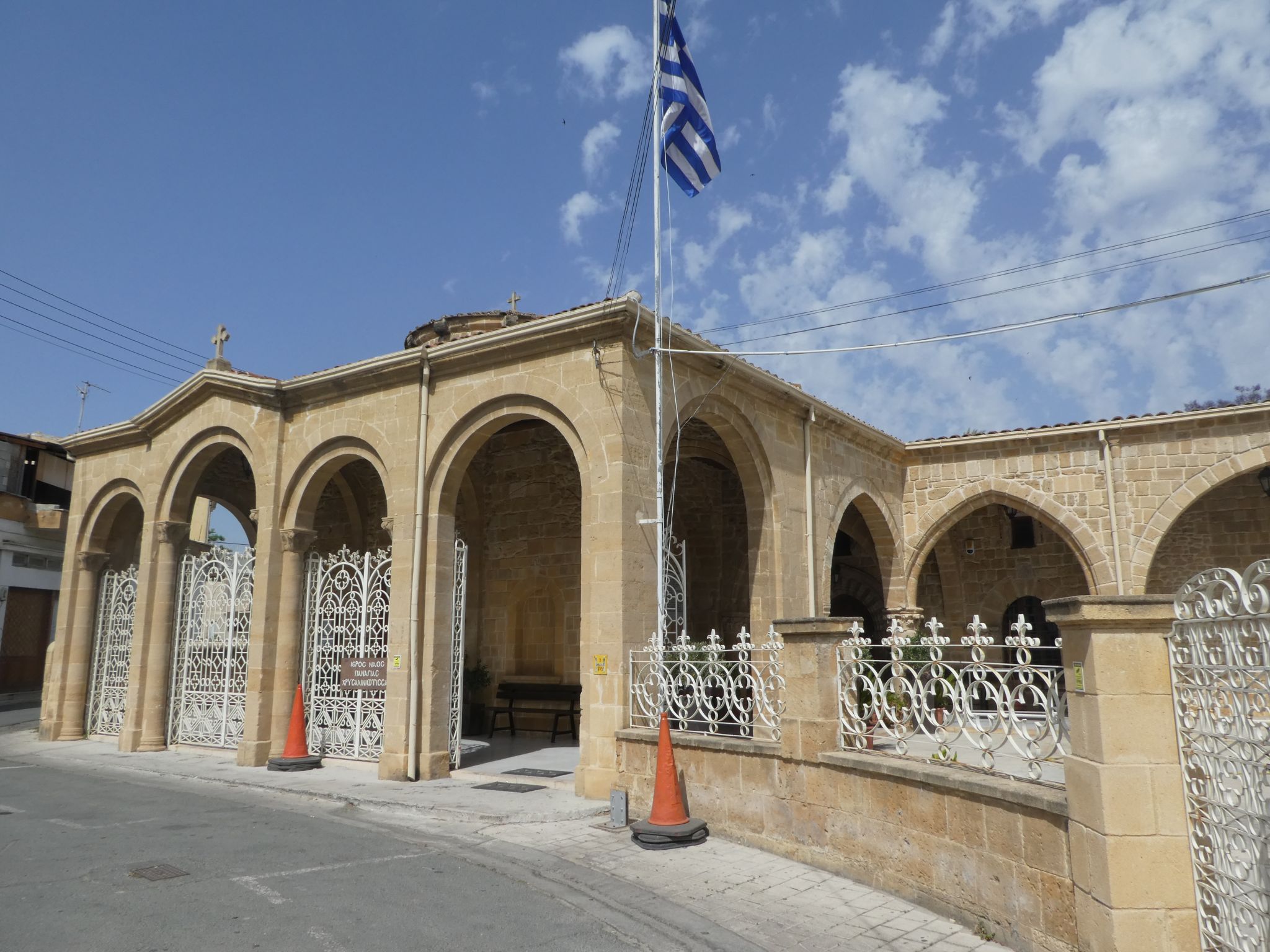 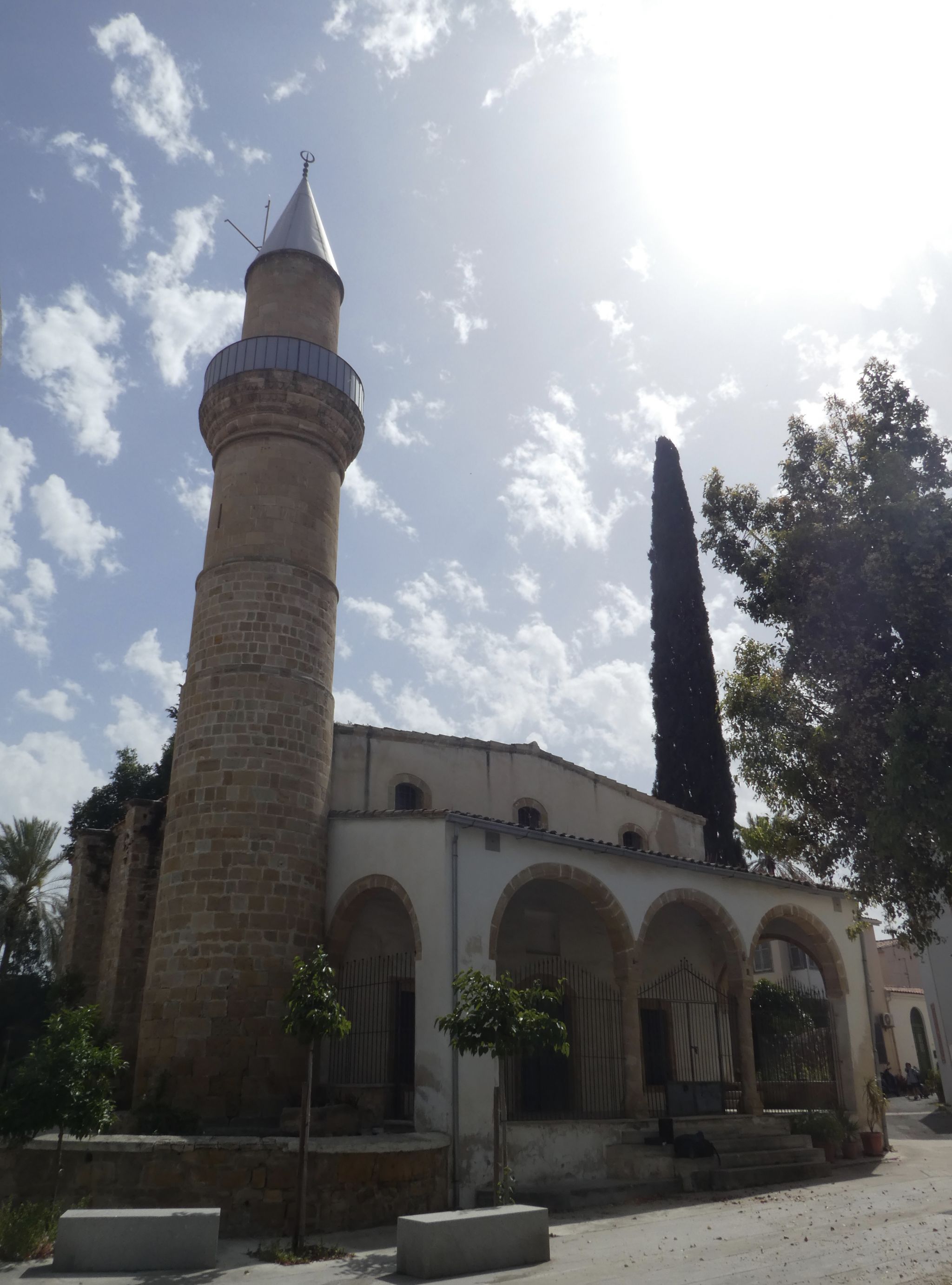 The Byzantine Museum has a stupendous collection of icons and frescoes, including a large number which were looted from churches in the north following the Turkish invasion and only returned after lengthy court action.  John preferred the Cyprus Classic Motorcycle Museum.

In various locations, locals have tried to make positive use of the barricades.  This one turns into an outdoor bar in the evenings. 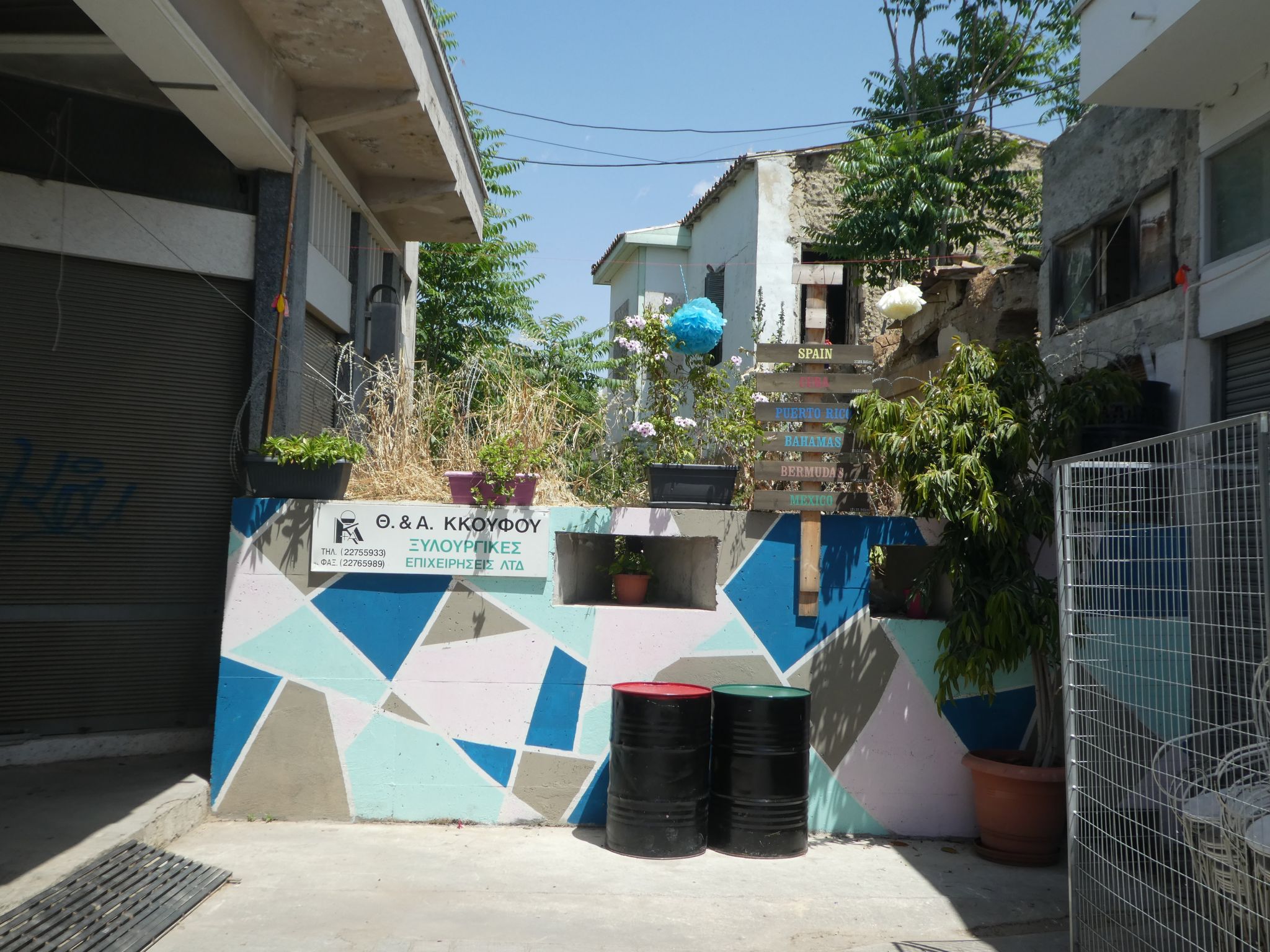 But there’s also a lot of graffiti expressing frustration and grief at the continued division. 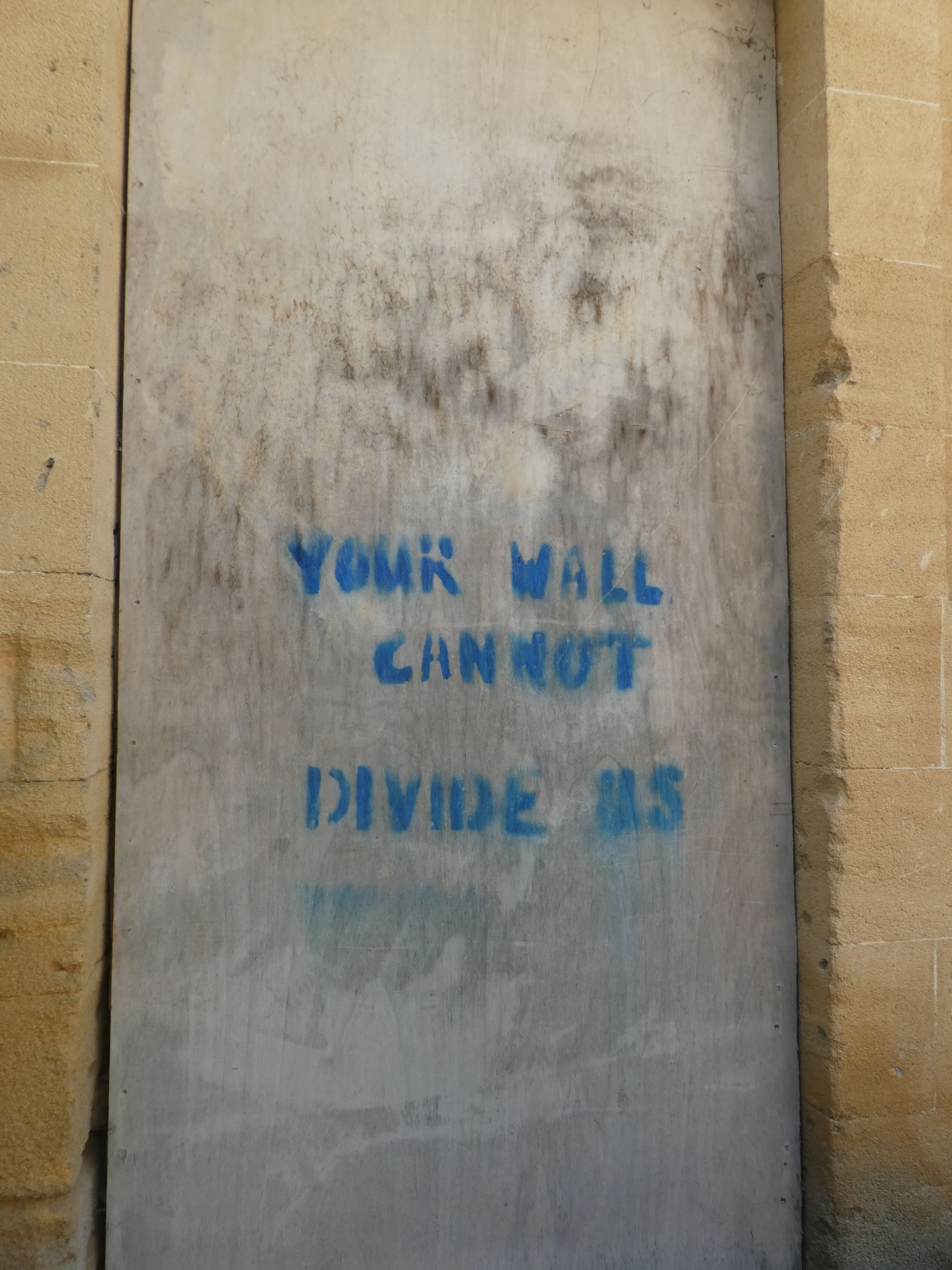 It remained impossible to cross from one side of the city to the other until 2003, when one road crossing was opened.  Pedestrian access was not permitted until, in a surprise move in 2008, the President of the (unrecognised) Turkish Republic of Northern Cyprus unilaterally announced that citizens would be permitted to cross by foot.

There is only one pedestrian crossing point, and you need to show your passport to the Republic of Cyprus authorities, cross the buffer zone, then show your passport to the Northern Cyprus authorities.  The same in reverse coming the other way.  It’s just like any other border crossing, except it is literally in the middle of what was once an ordinary city street.  From both directions it is pedestrianised up to the checkpoint now, because the buffer zone runs straight across it, making it a street that goes nowhere. 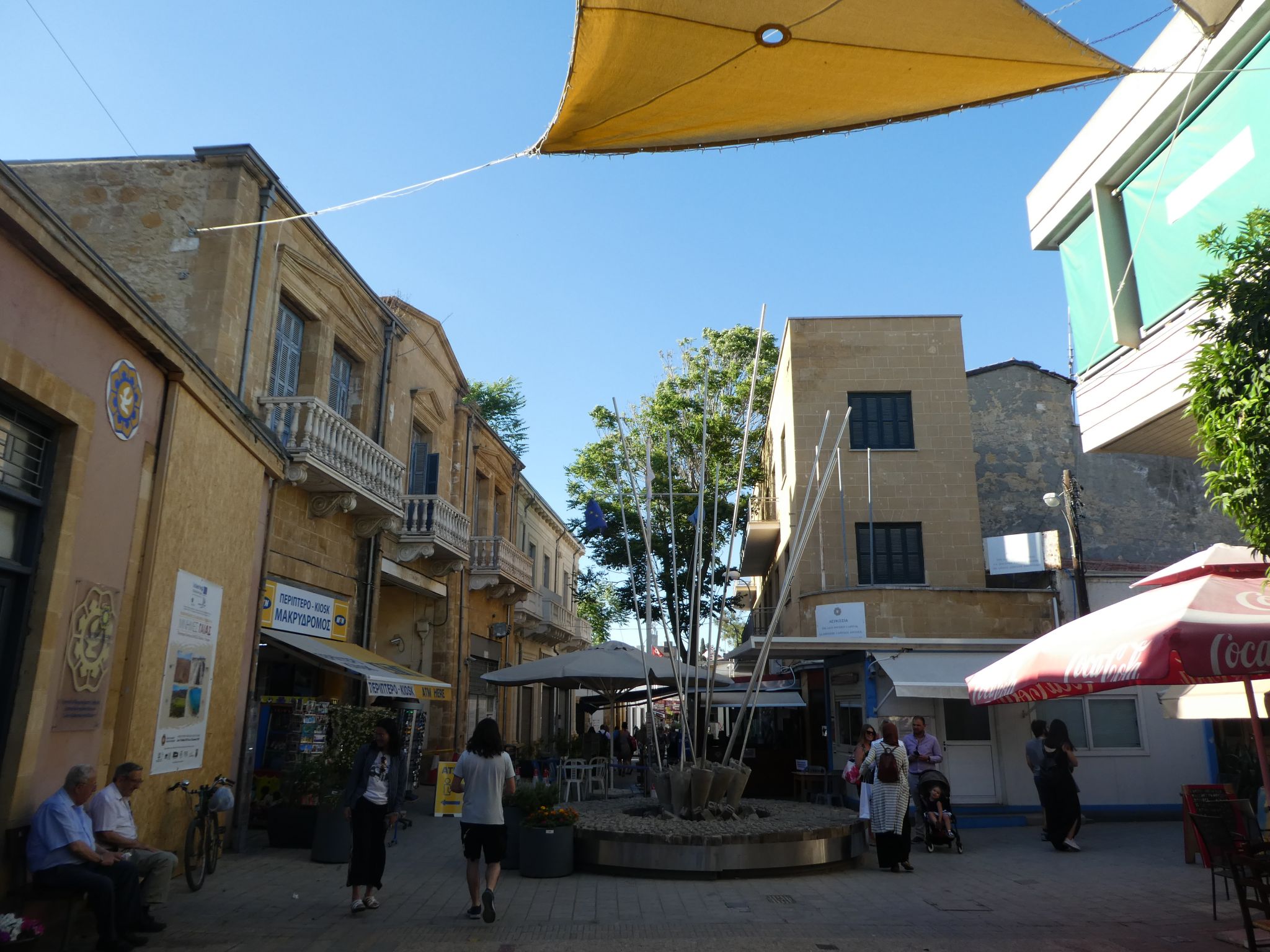 Crossing is a reasonably relaxed process, certainly not Checkpoint Charlie, but the parallels with the Berlin Wall have not gone unnoticed. 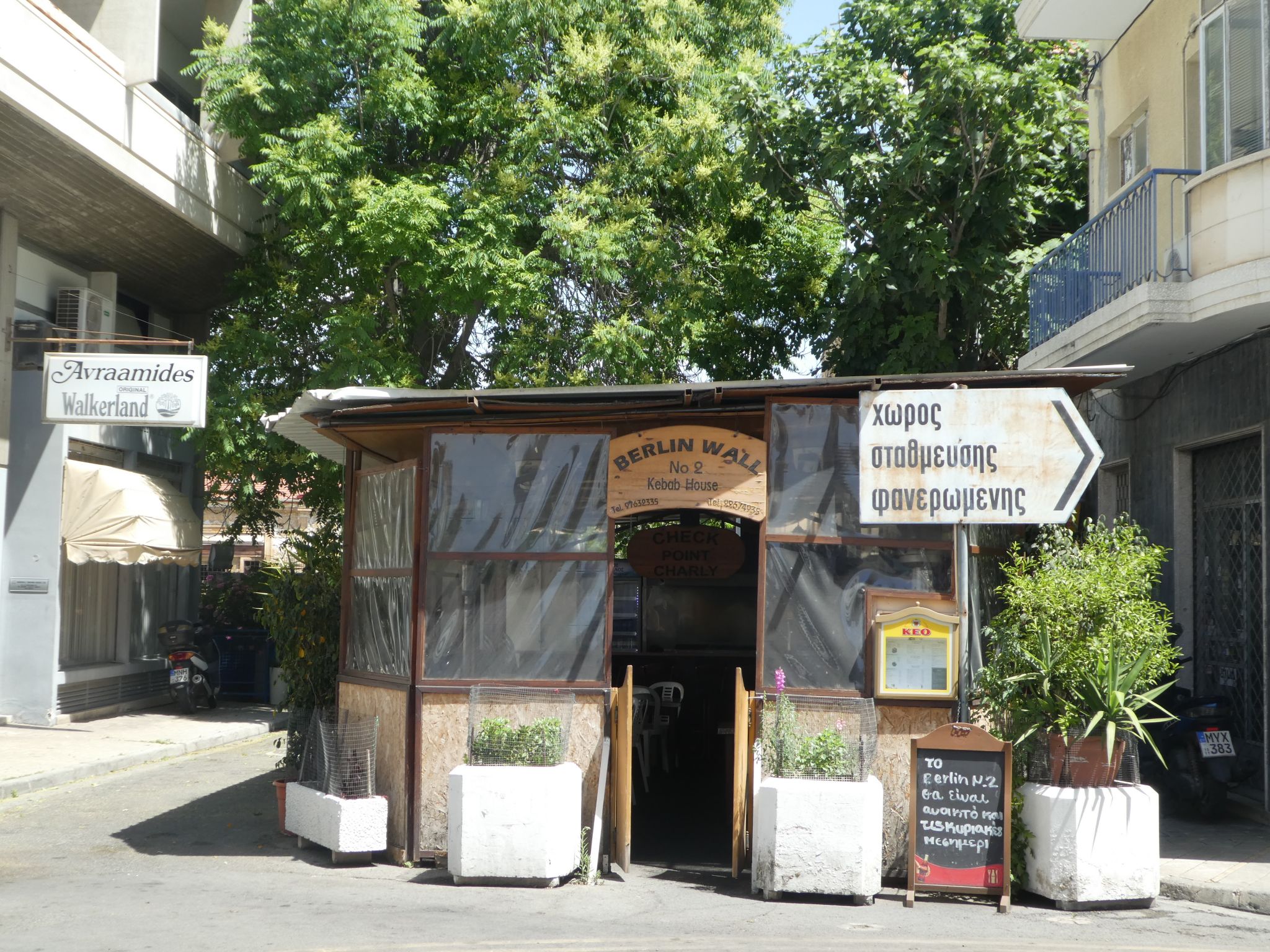 North of the Green Line, the city is known as North Nicosia or Lefkoşa.  The area of the old town on this side is very different to the south.   The Ottomans ruled Cyprus for over 400 years and there are many historical sites dating to this period.

The Selimiye Mosque started out life as the Church of St Sophia, built during French rule in the 1300s and consecrated in 1326.  But in 1571, after the Ottomans conquered Cyprus, the church was converted to a mosque.  That’s why it looks like a Catholic Cathedral with Islamic minarets, and why the interior sports a Gothic arched ceiling but an Islamic fit-out. 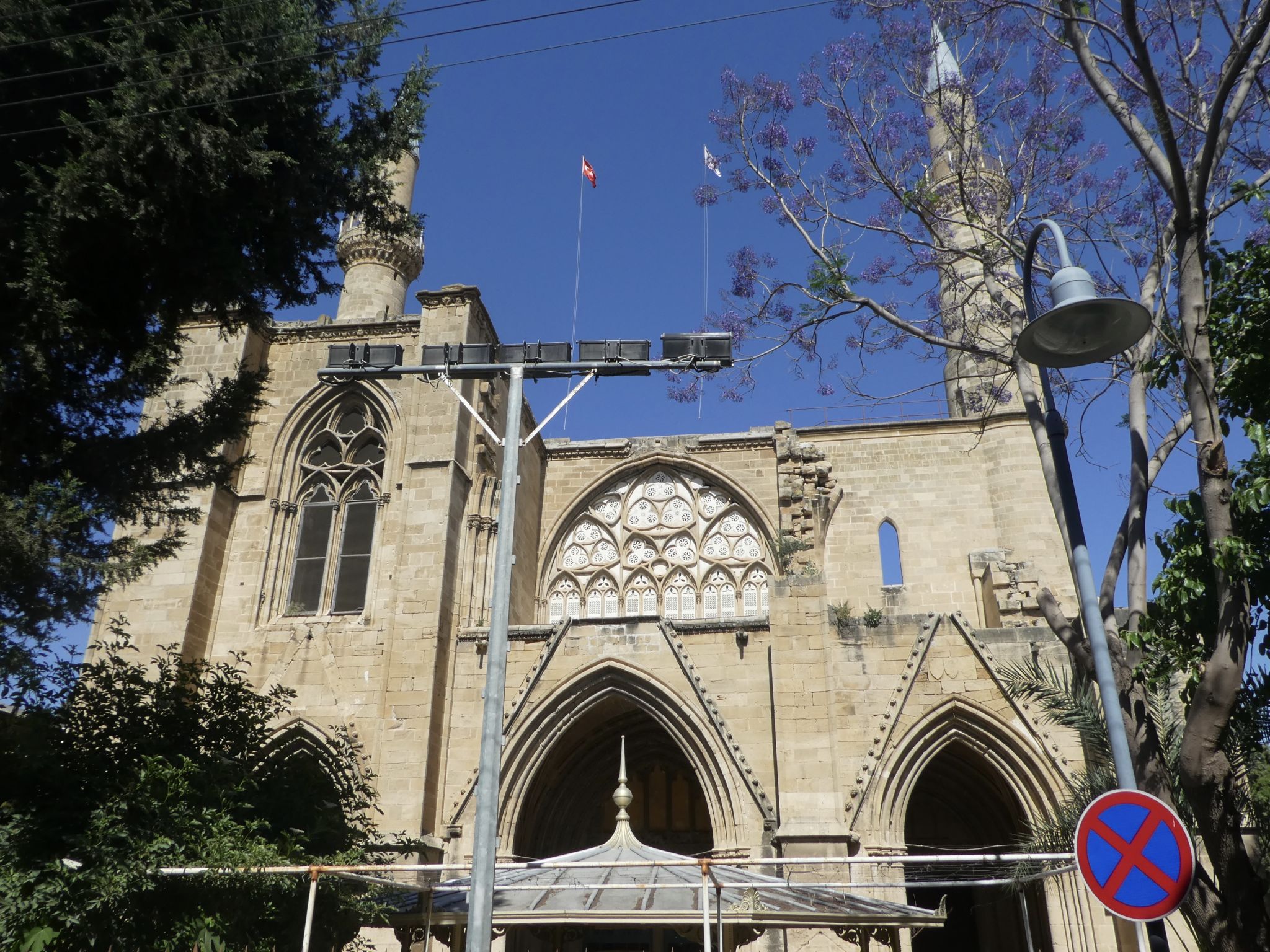 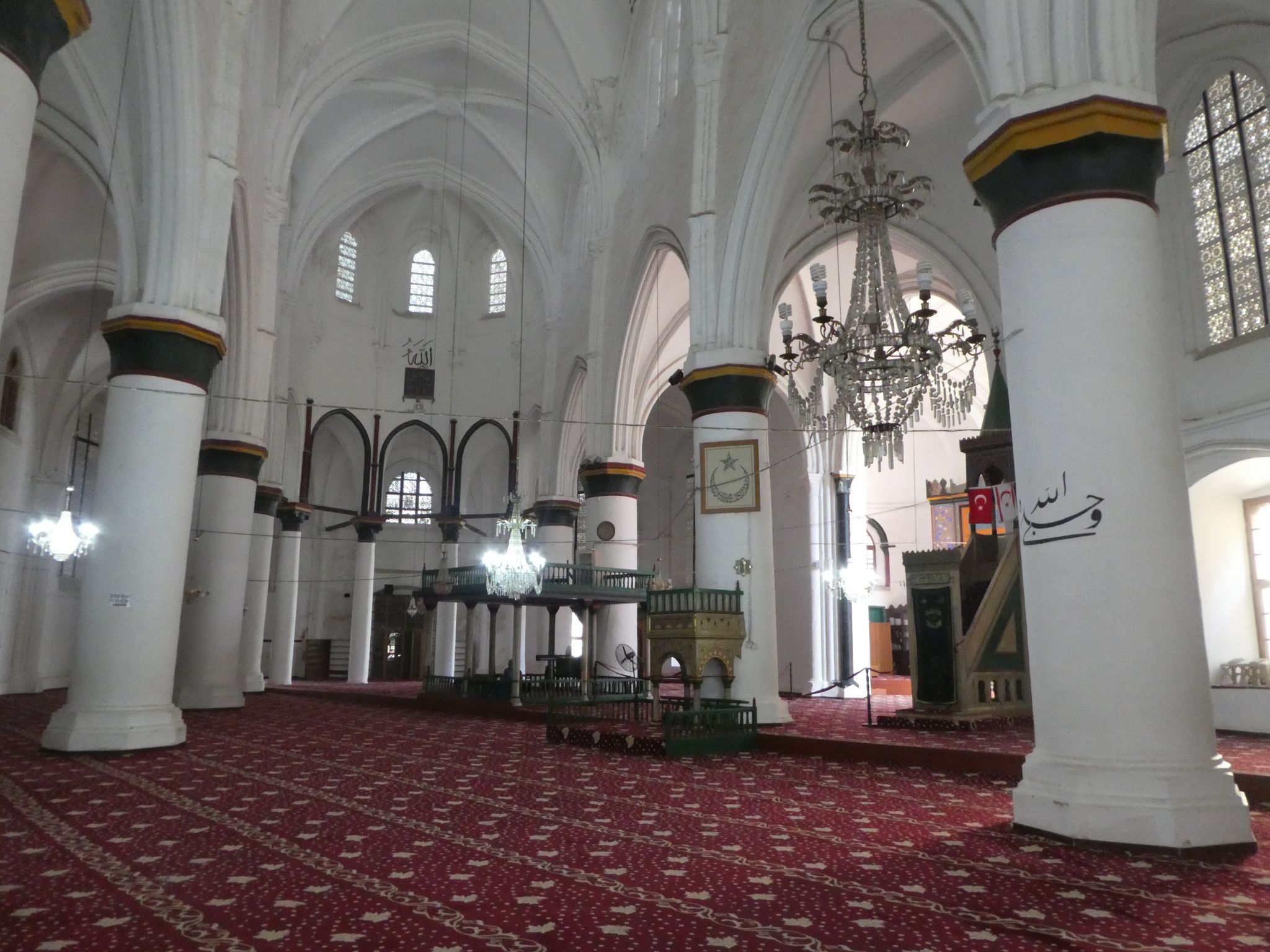 Even more obviously hybridised is the Haydarpasa Mosque.  It was built in the 14th century as the Church of St Catherine and still has the coat of arms of the then ruling French royal family over the entrances, but there’s a minaret grafted on. 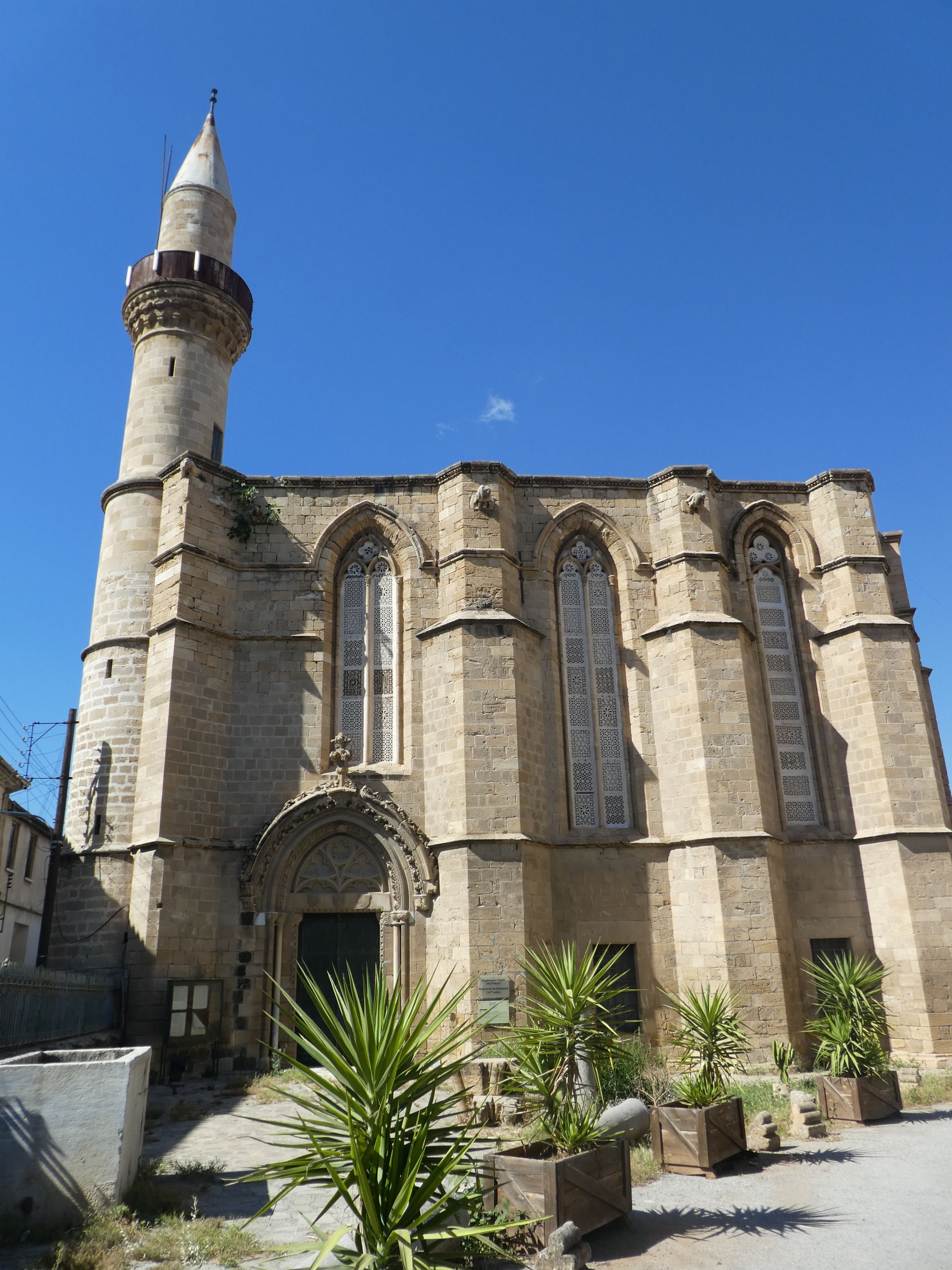 Nearby the Buyuk Han is Cyprus’ best preserved example of Ottoman caravanserai architecture.  Restored in the 1990s it has cafes in the courtyard and small handicraft shops in the former sleeping cells around the upper floor. 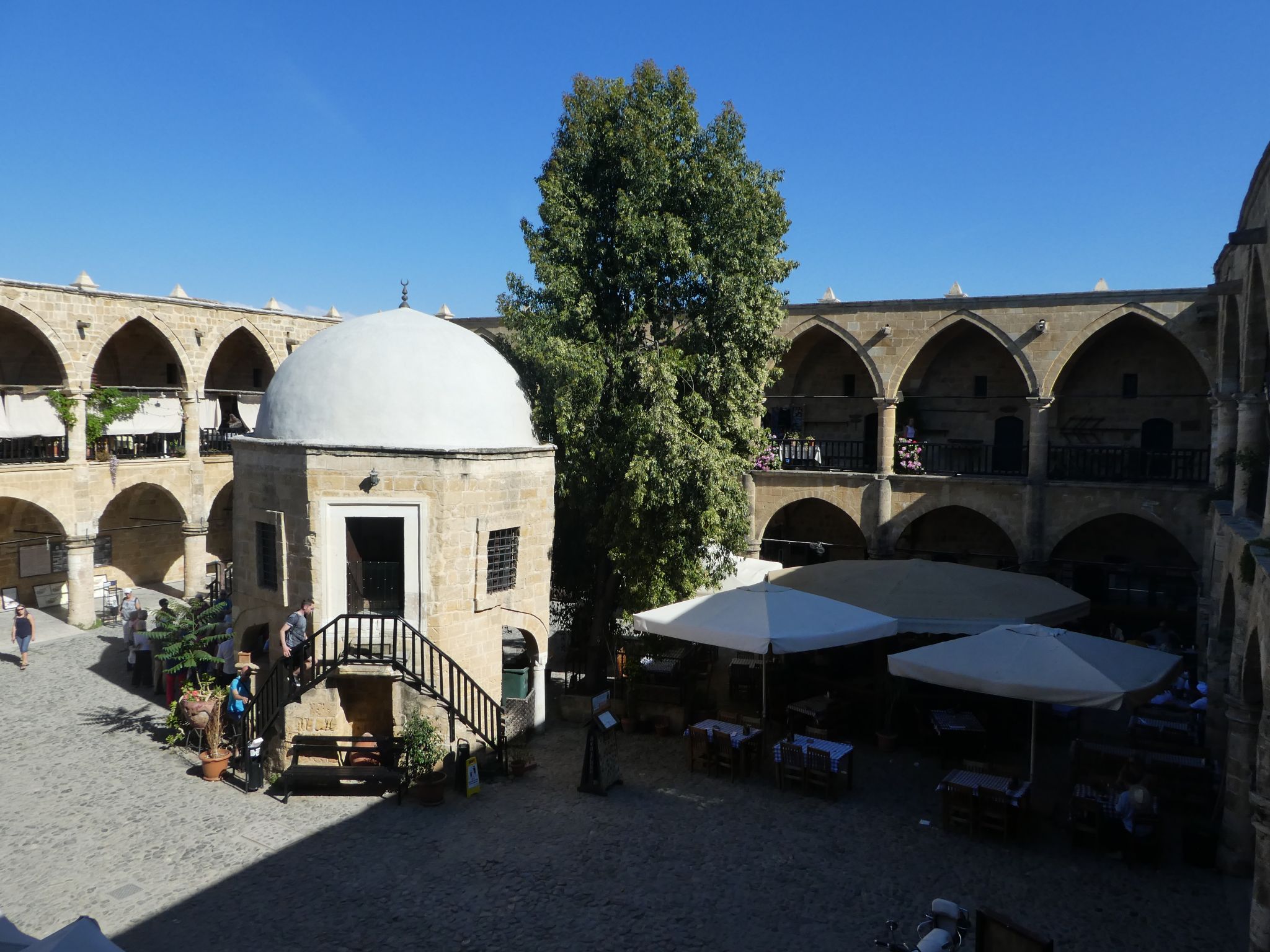 It was not only the Greeks who were forced out of North Nicosia when the Green Line buffer went up.  The Armenian community was displaced and it’s 13th century church fell into ruin.  An eight year restoration project has brought it back to its former glory, but the church is empty.  There is no longer a congregation here. 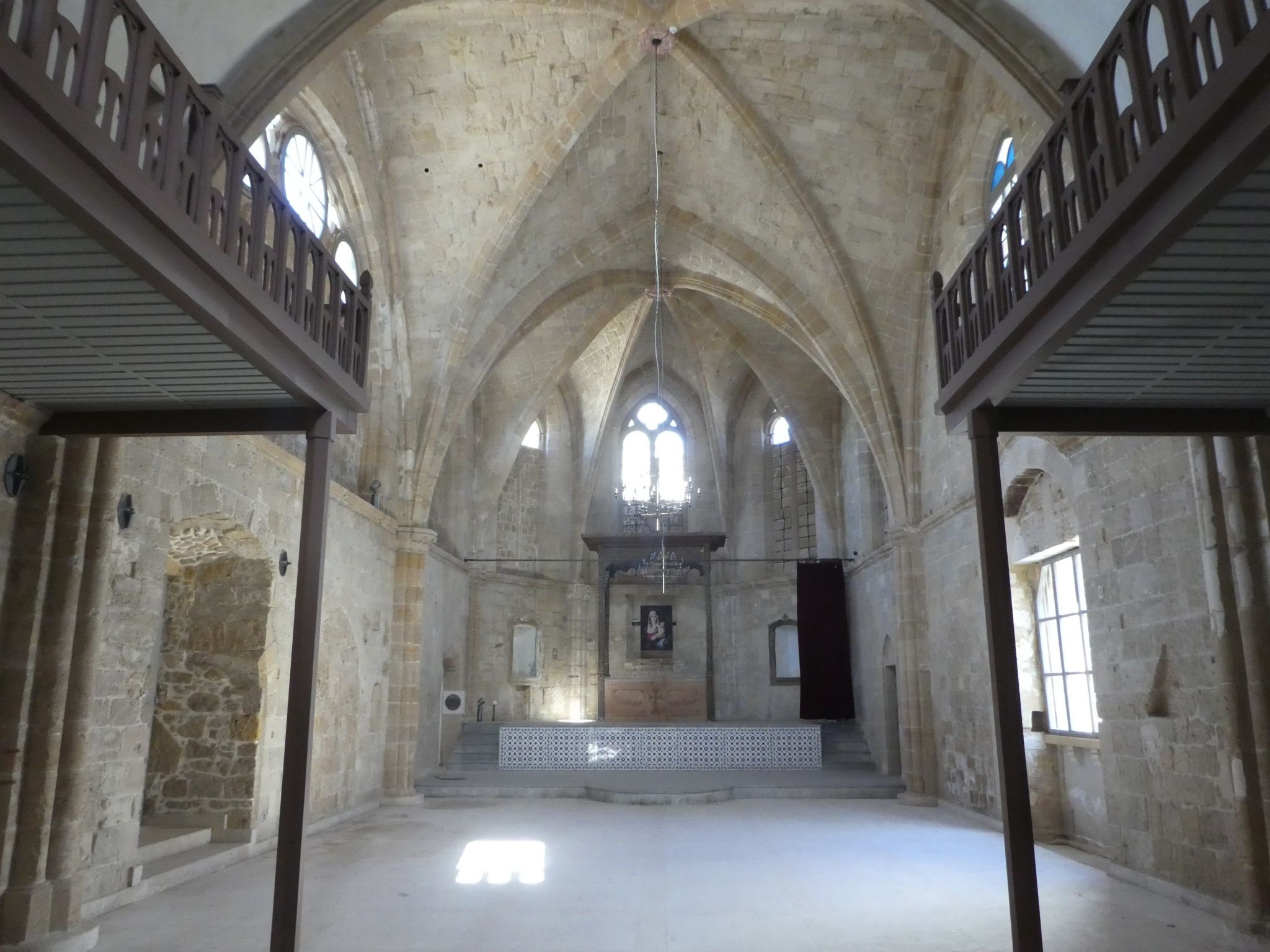 The UN Peacekeeping Force in Cyprus is the third longest running UN peacekeeping deployment in the world (after the still-ongoing missions monitoring the 1948 Arab-Israeli ceasefire and the 1949 Pakistan-India ceasefire in Kashmir).  Intermittent talks about re-unifying the country have serially failed.  There is hope for a breakthrough, with pressure on Turkey to resolve the situation as a pre-condition for advancing its application to join the EU.  In the meantime, ordinary people in Nicosia get on with their lives on either side of the Green Line in Europe’s last divided capital.