Dotted around the villages and in the forests of the Troodos Mountains in central Cyprus are churches and former monasteries which together comprise one of the largest groups of Byzantine churches anywhere in the world.  Why?

Cyprus was part of the Byzantine Empire for 700 years, and during this period the Orthodox Church of Cyprus flourished.  But in 1197 the French Catholic Lusignan dynasty took control.  The Orthodox Church was repressed and members faced discrimination.  Its clergy, together with devoted craftsmen and builders retreated into the Troodos Mountains where they built private ecclesiastical retreats in which Orthodoxy continued to thrive for another 300 years until the Ottomans arrived.

And although the Ottomans destroyed many Byzantine churches around the coast, they never really pushed into the mountainous inland.  Most of the monasteries were closed but the Troodos churches remained, many of them surviving to this day.  Some are still in everyday use, some are restored for tourist and devotional visitors, and some are open for viewing but are in original condition and very dilapidated.

UNESCO has listed a select group of ten, saying that these churches “all richly decorated with murals, provide an overview of Byzantine and post-Byzantine painting in Cyprus and bear testimony to the variety of artistic influences affecting Cyprus over a period of 500 years. The structures display elements that were specific to Cyprus and were determined by its geography, history and climate … The architecture of these churches is unique, confined to the Troodos range and almost certainly of indigenous origin”.

So here is the dilemma.  Should you visit just one, on the basis that they are probably all very similar (John’s view), or should you see as many as possible on the basis that if you don’t, you will almost certainly later meet some smart Alec who says “I can’t believe you didn’t visit …….., it was the best one!” (Julie’s view).

FOMO (fear of missing out) prevailed.  We hired a car and headed for the hills.  Here’s what we saw.

In the northern foothills of the Troodos Mountains several kilometres from the small village of Nikitari, this church was built in about 1099.  The church was embellished in the 14th century and the frescos were probably the best preserved, most comprehensively intact ones we saw.  The interior is literally covered in frescos. 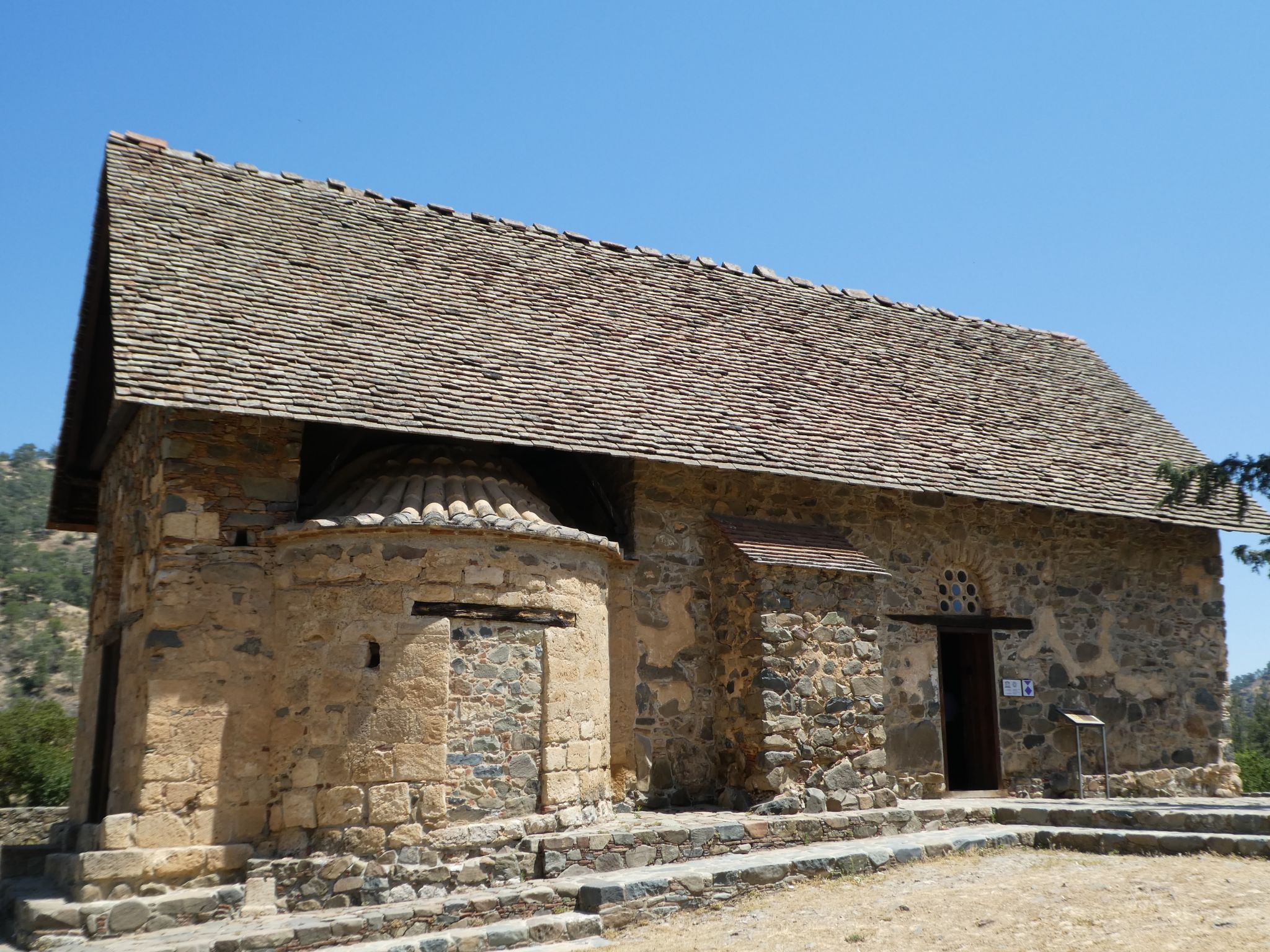 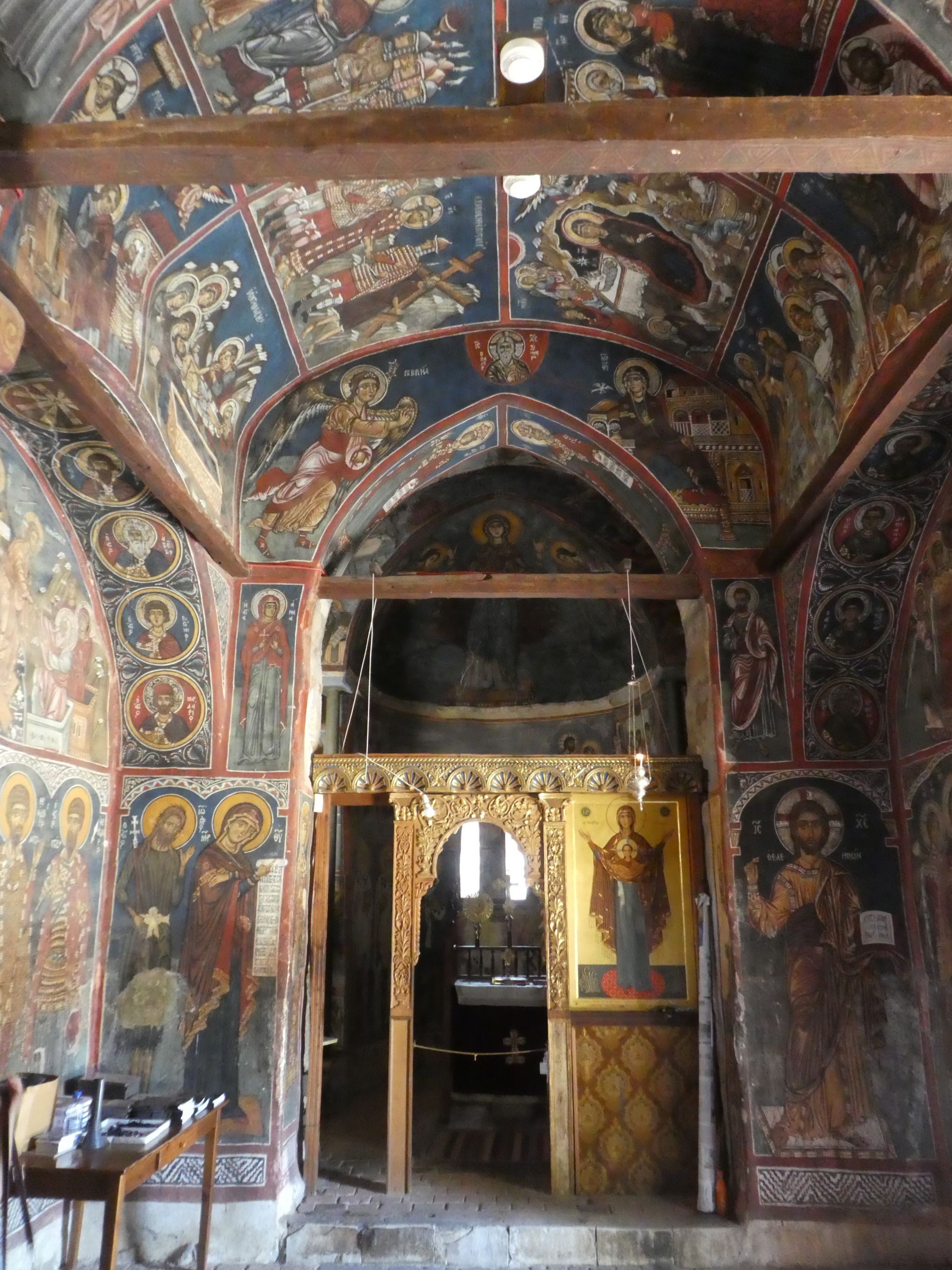 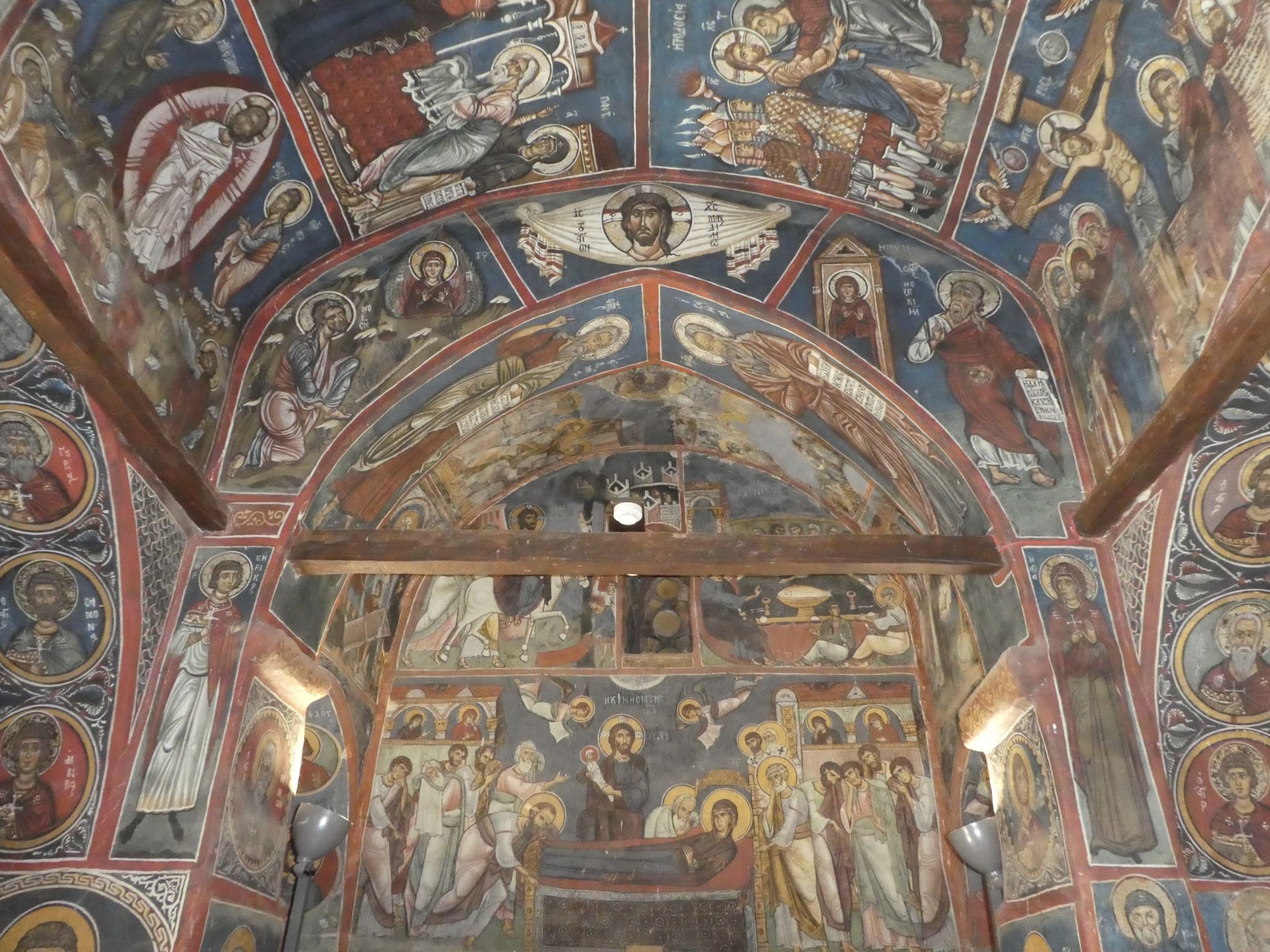 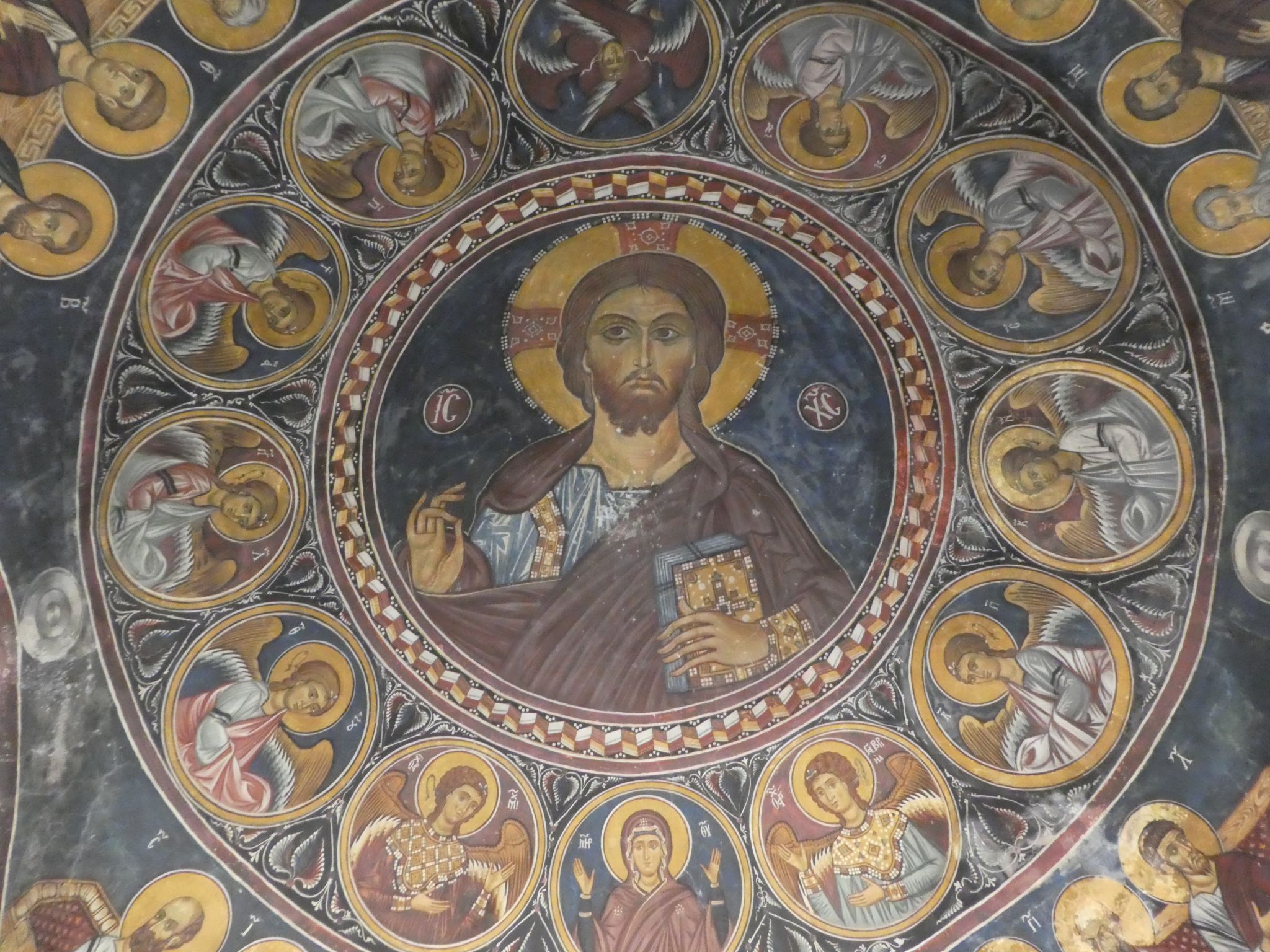 Church of Our Lady of Podithou

Situated near the village of Galata, we were lucky with this one.  It’s a working church and is often closed when services are not being conducted.  When we arrived a baptism was in full swing.  The church was packed.  We waited until the service was finished and were able to have a good look around. 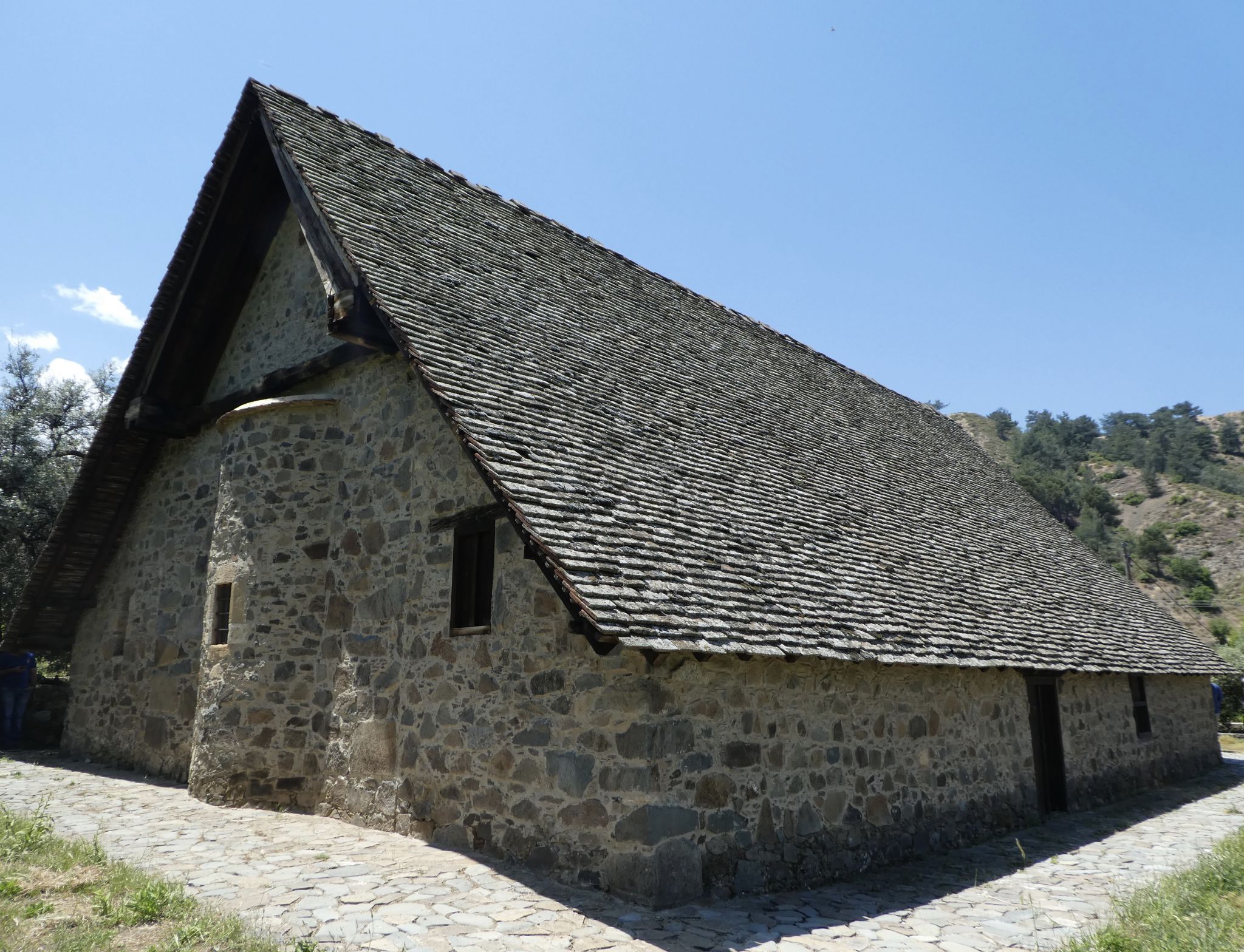 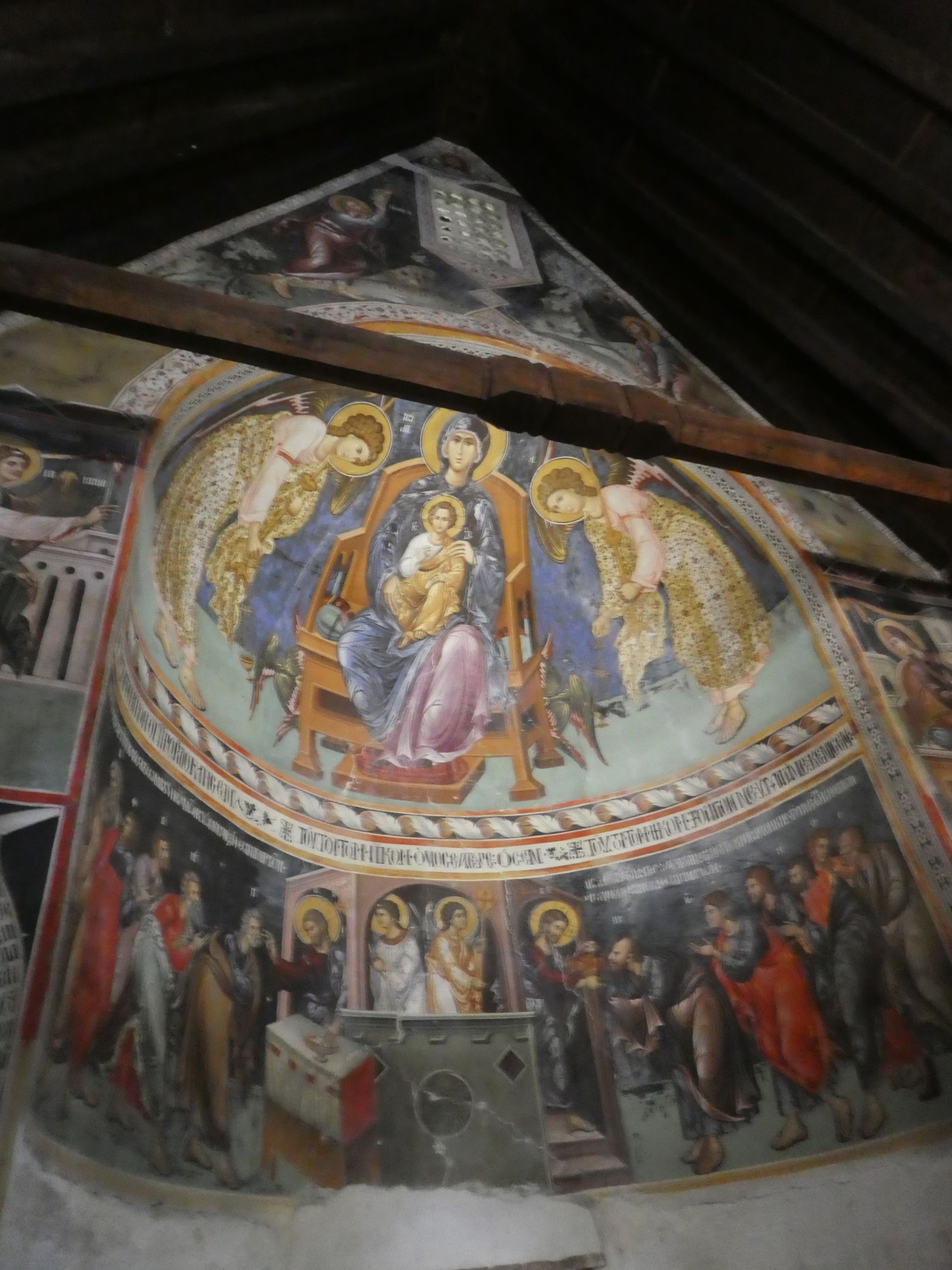 A few hundred metres away, tucked down a lane, is the tiny Archangelos Michael Chapel.  It is not one of the UNESCO listed ten, but was so close we walked down for a look while waiting for the service at Our Lady of Podithou to finish.  The chapel was closed, so we had to be content with a small painting over the portal. 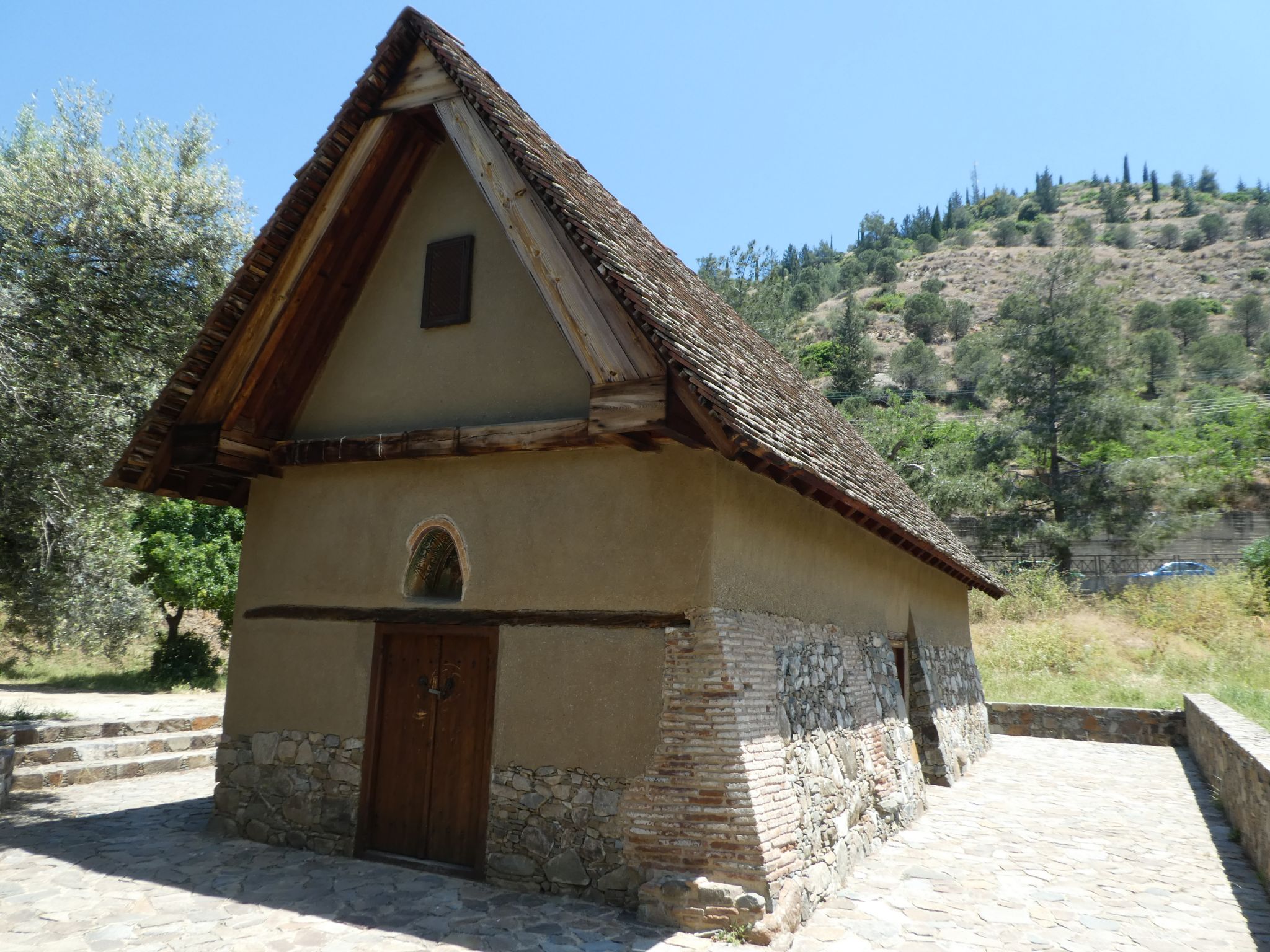 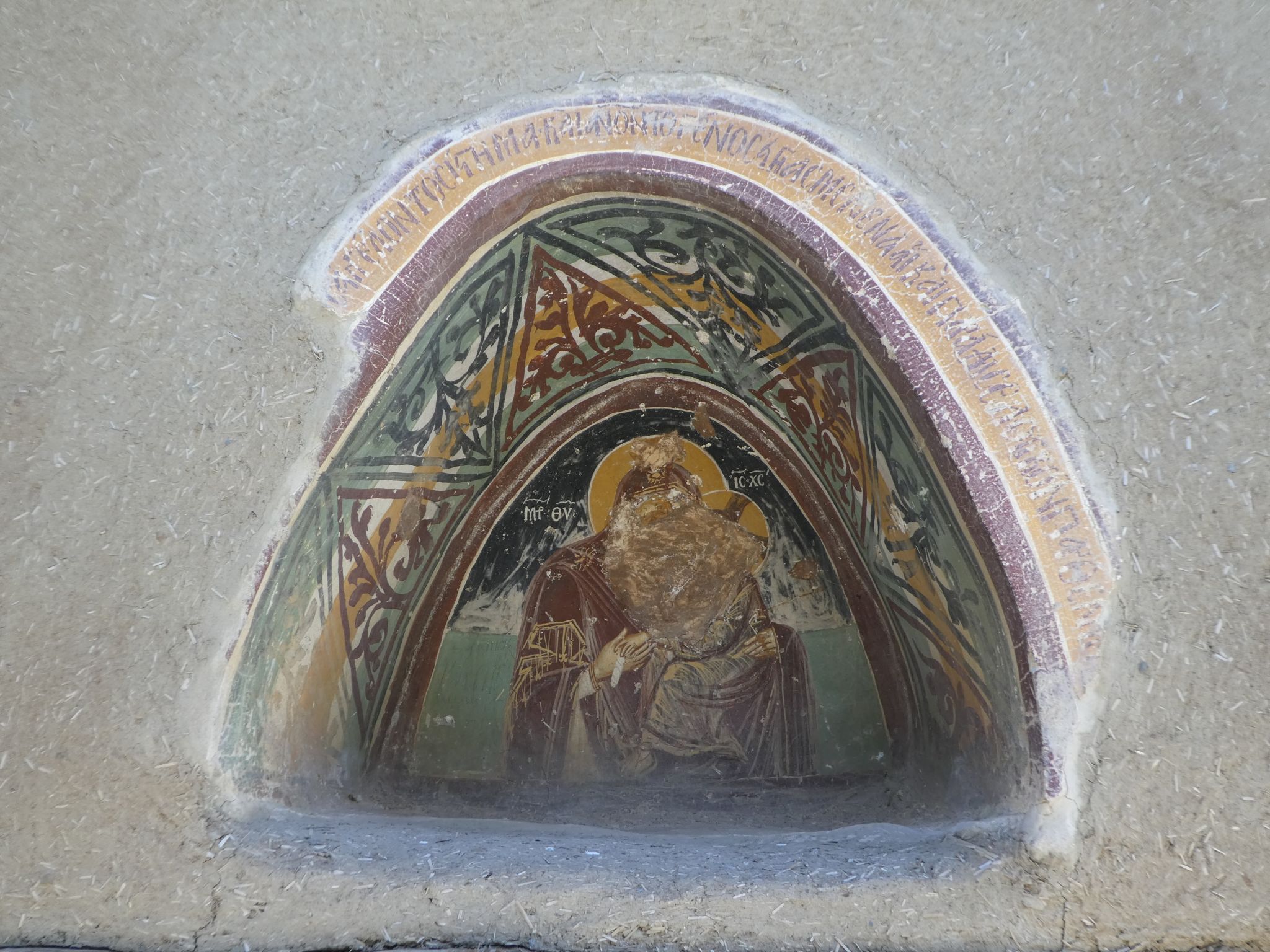 Church of St Nicolas of the Roof

This is a beautiful church set in calm and tranquil grounds in dense forest several kilometres outside the village of Kakopetria.  It is all that is left of a monastery established here in the 11th century.   The reason for its dedication to St Nicolas is not known, but the name ‘of the Roof’ is thought to refer to the steep pitched roof  which was added in the 13th century. 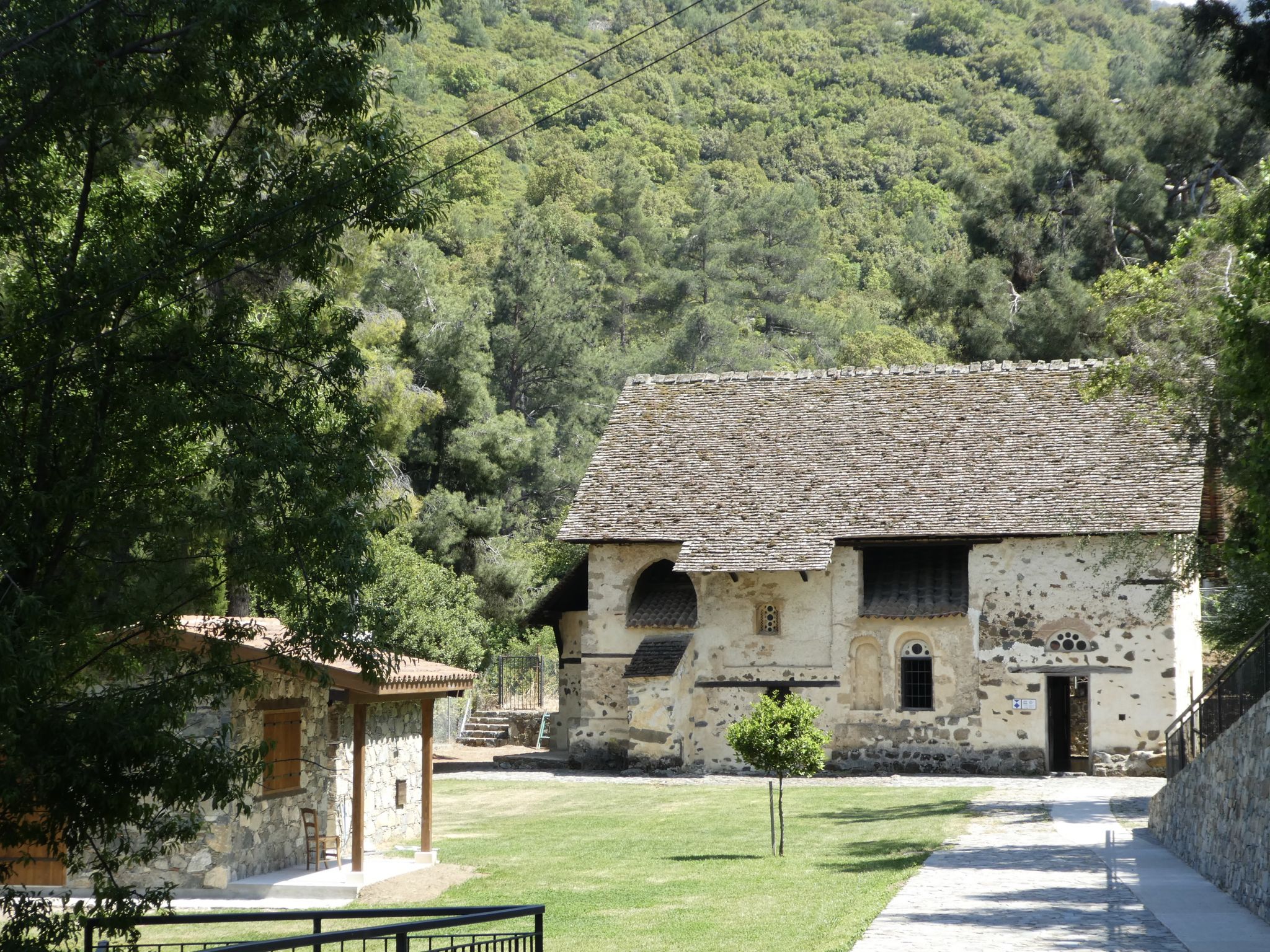 The frescos were lovely and in very good condition, but unfortunately no photographs are permitted inside.

The church here in the village of Kalopanayiotis was built in the 11th century and expanded in the 12th century.  In the 15th century, the complex was transformed into a monastery with two wings of cells added.  It functioned as a monastery until the early part of the 19th century, but is now back to being a church only.  The frescos here are not in as good condition, but there’s also an icon museum on site with some beautiful pieces. 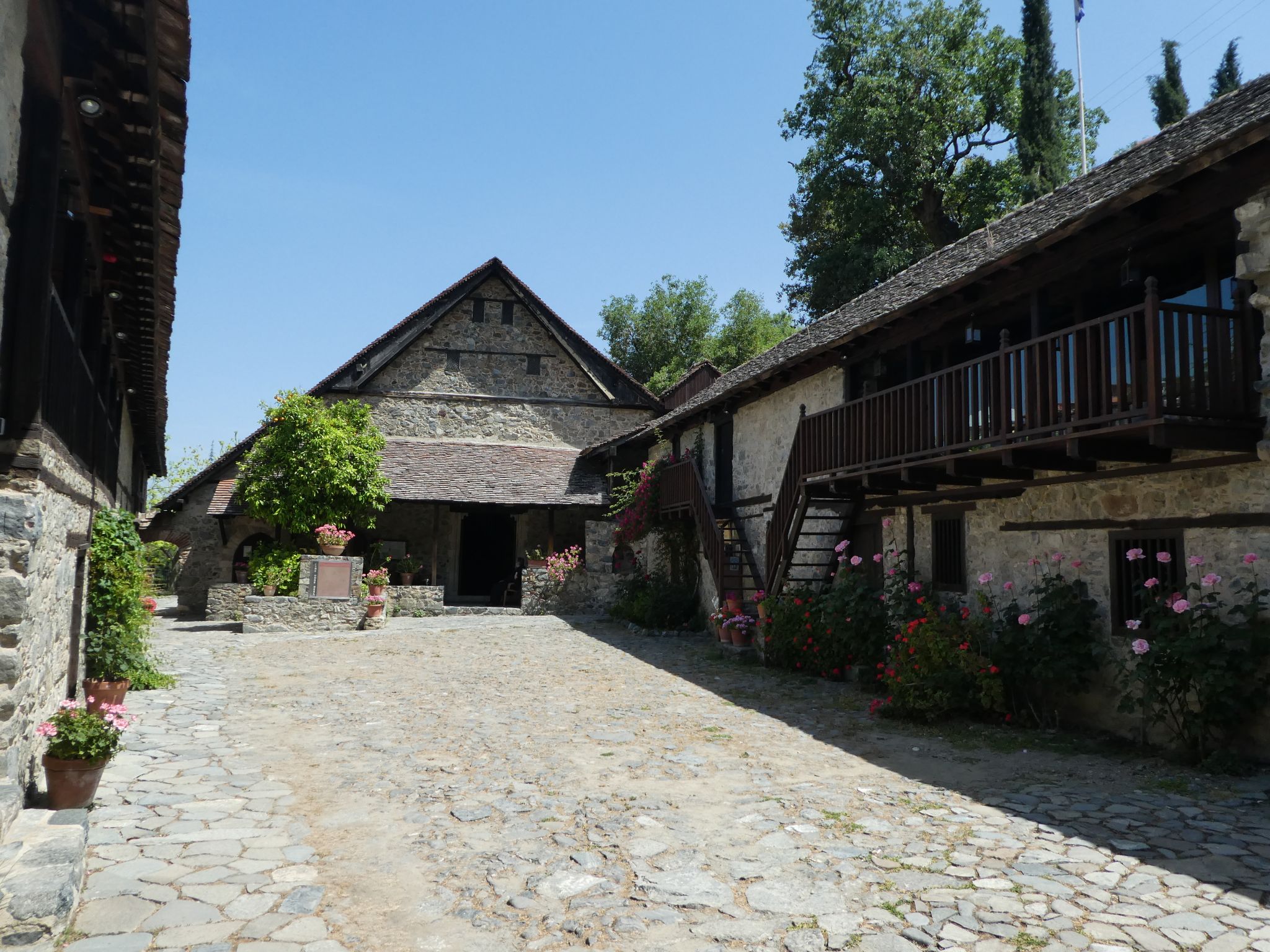 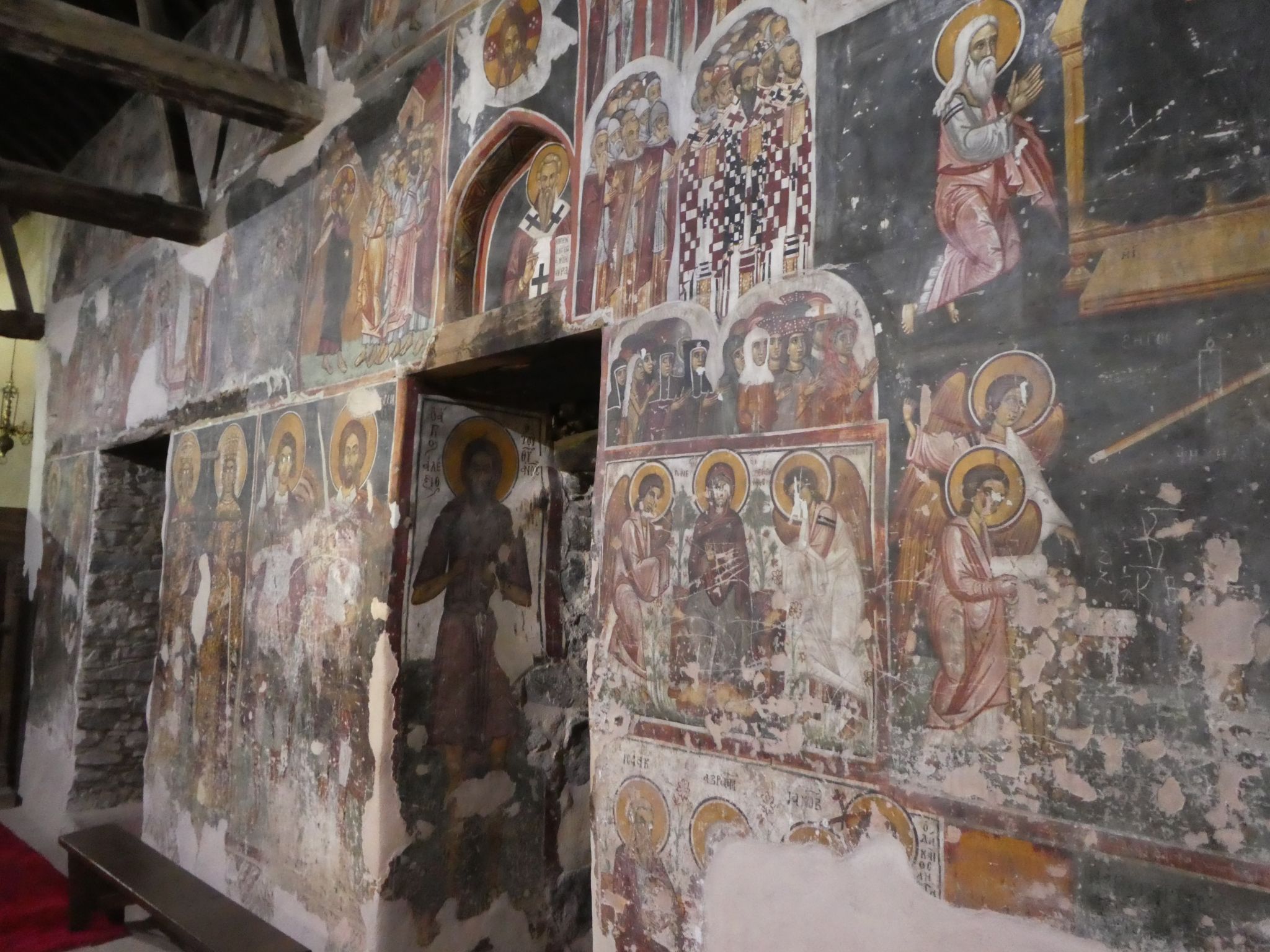 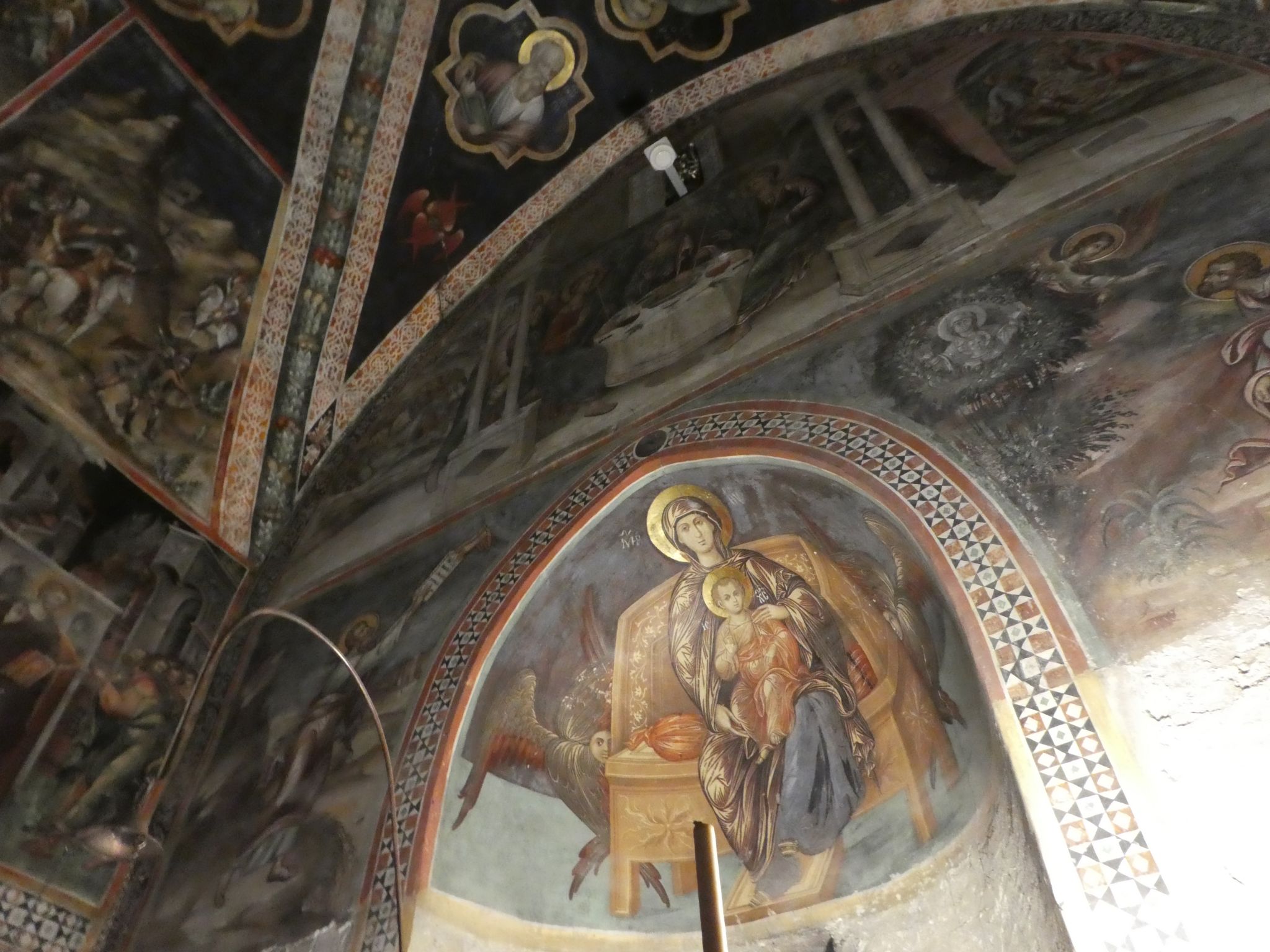 Church of Our Lady of Moutoulla

This charming little church on a ridge overlooking the village of Moutoulla contains the only series of 13th century frescos in Cyprus which can be specifically dated, thanks to an inscription which states the church was built and decorated with frescos in 1280 with funds donated by a local couple.  The frescos here are rather deteriorated but are notable for the bright red background which remains vivid today. 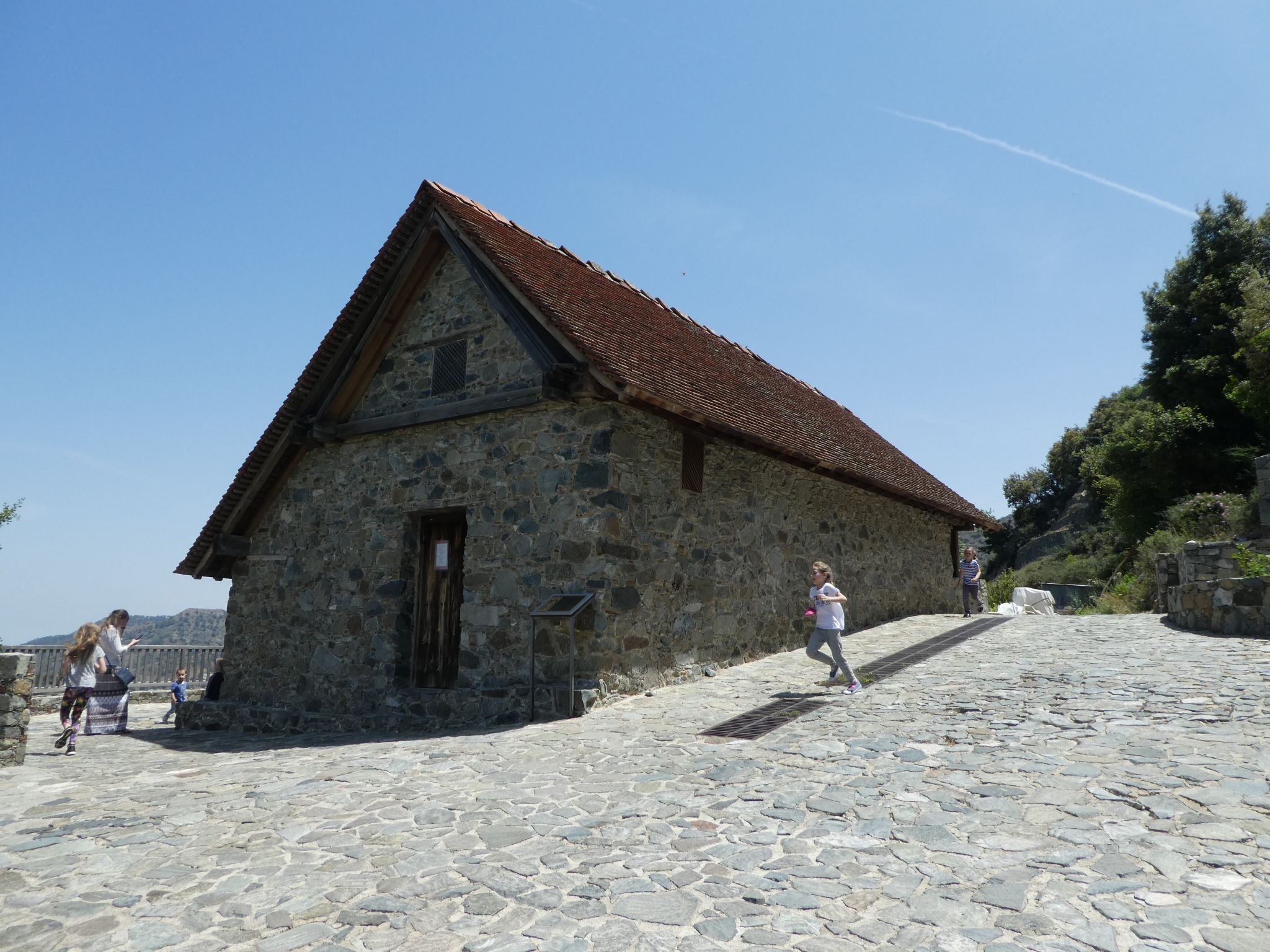 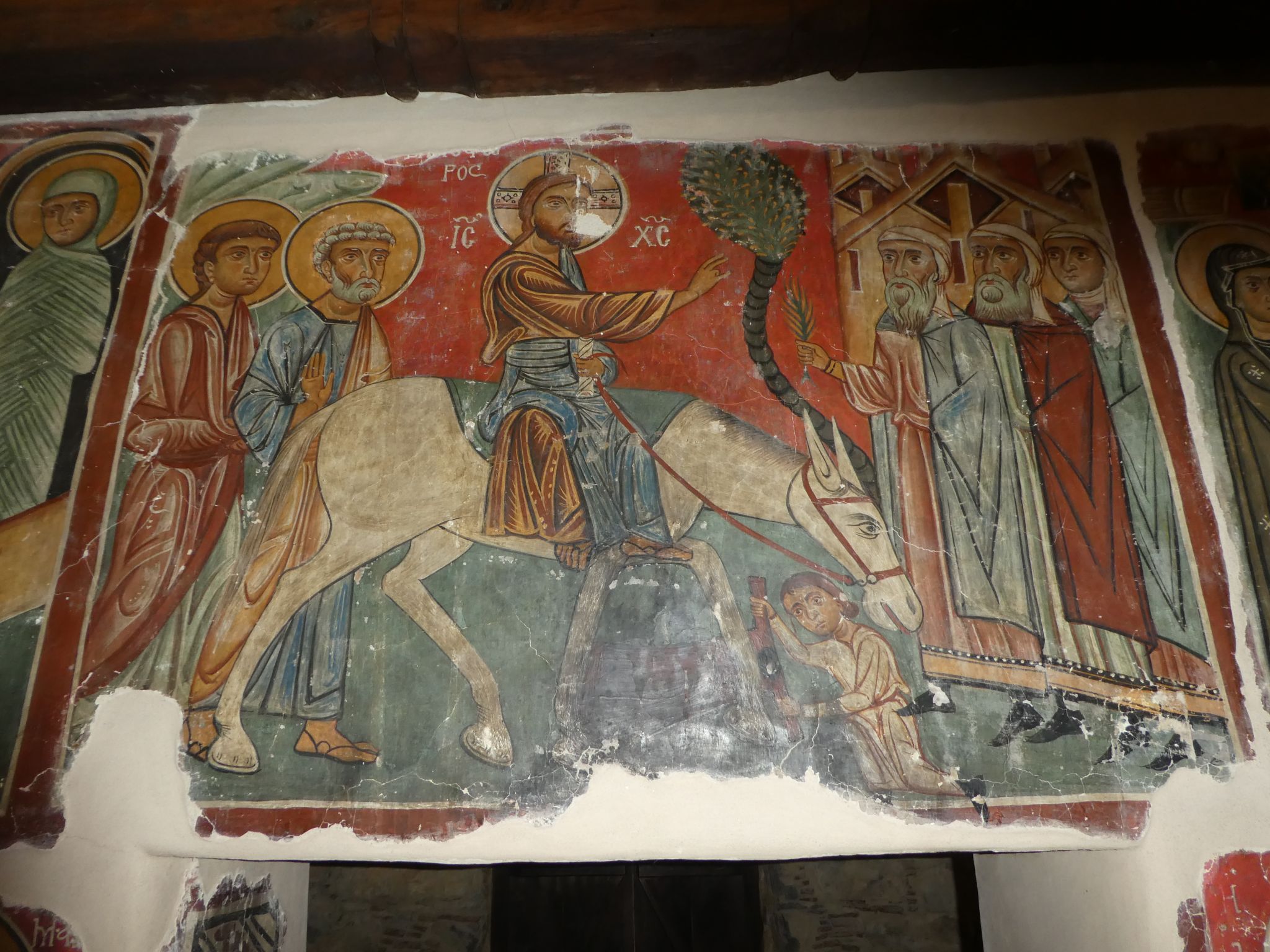 On the edge of the village of Pedoulas, the church is tucked between houses at the top of a street so steep and pot-holed it was definitely 4WD and hire cars only.  It’s a relatively new church, built in 1474 with funds donated by a local priest.  The frescos of its namesake, the Archangel Michael, are particularly stunning. 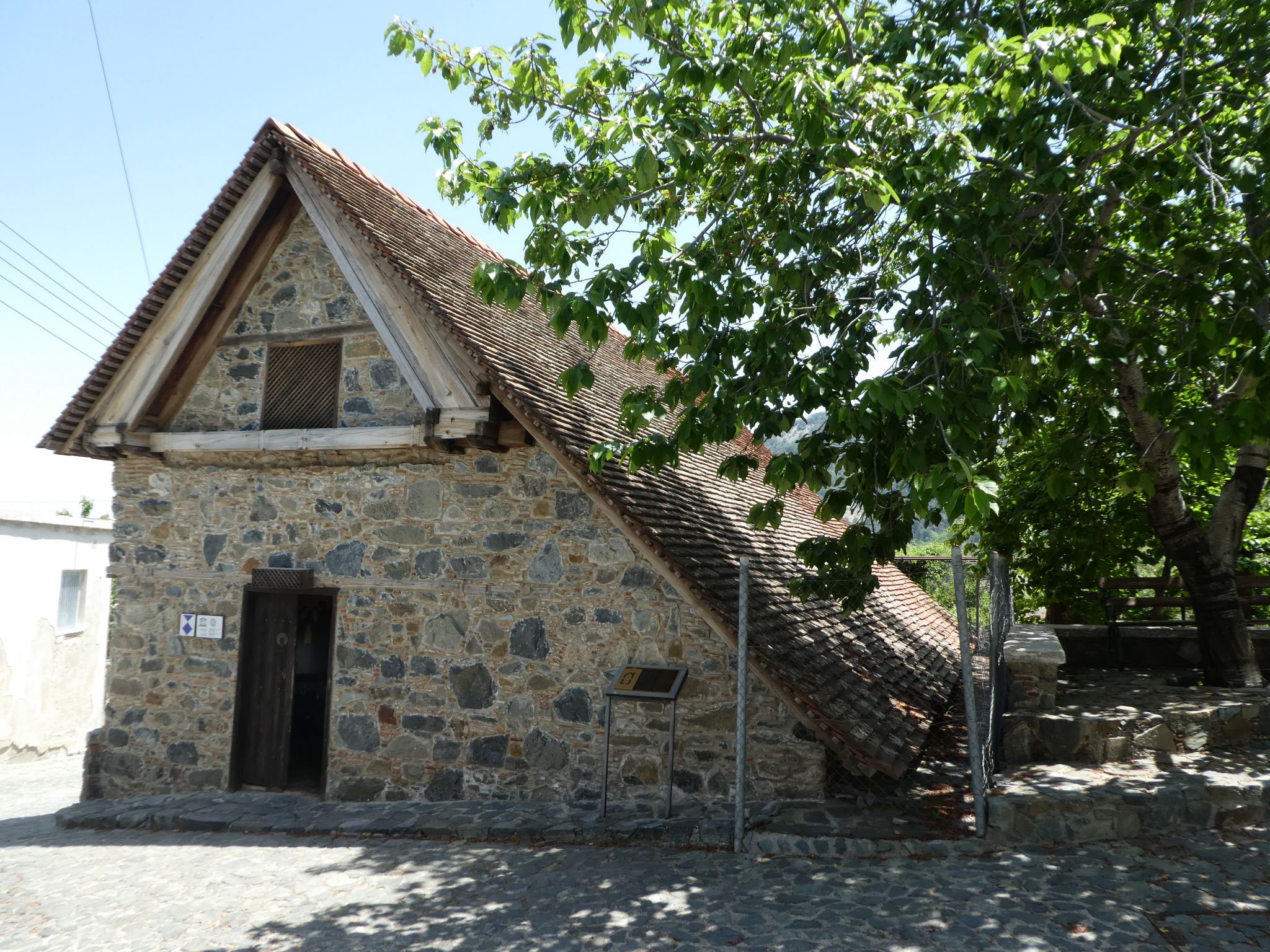 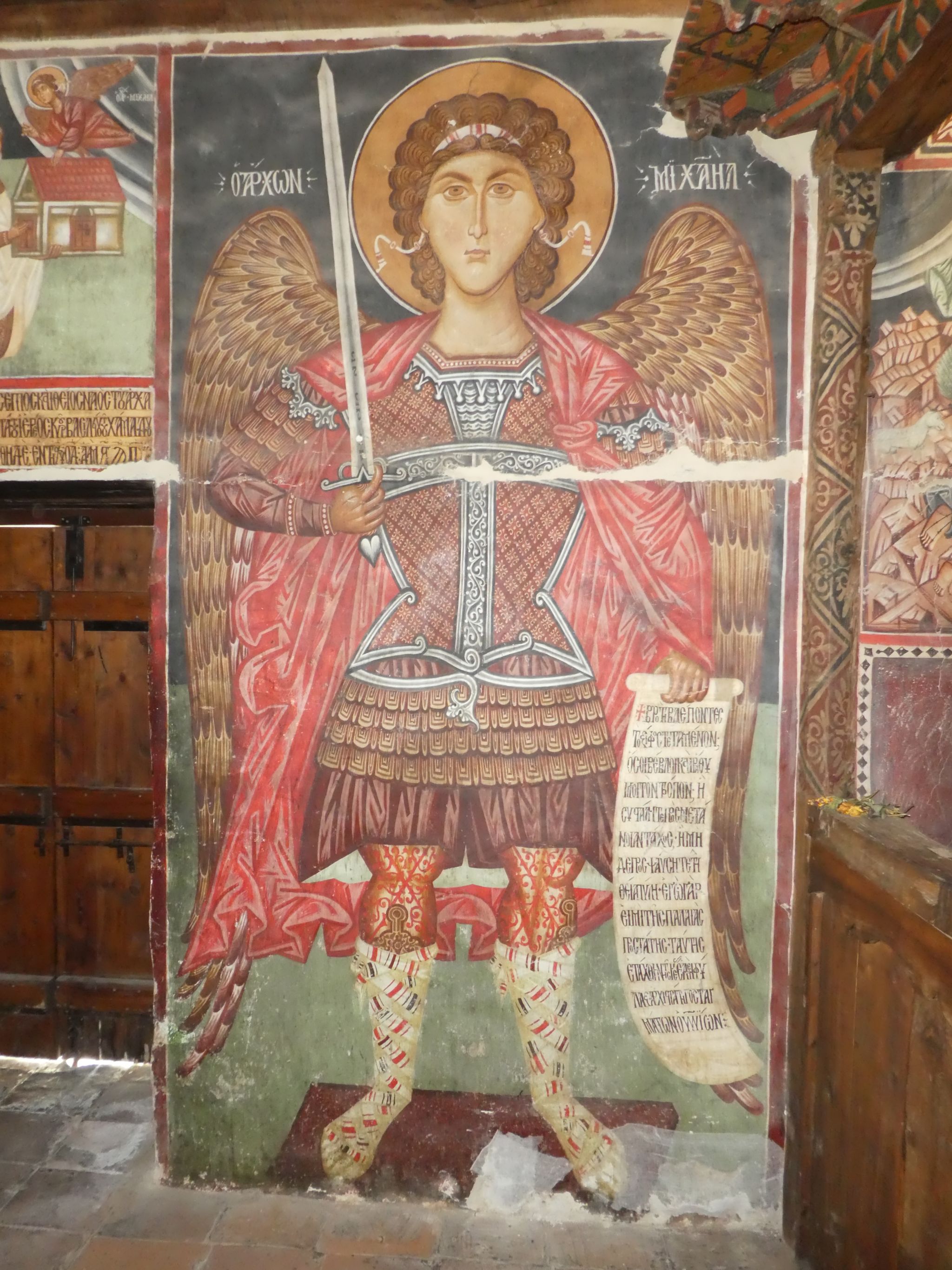 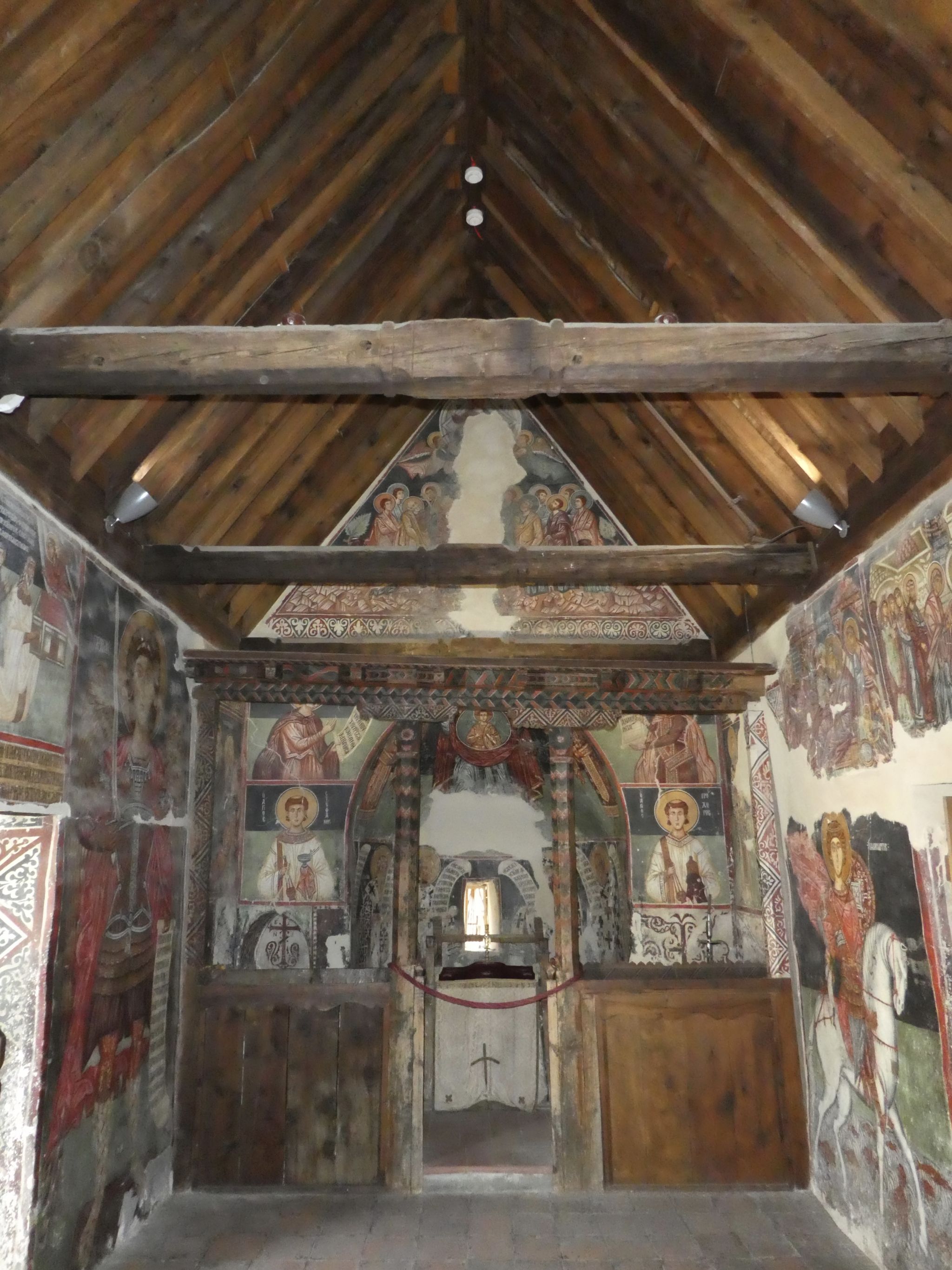 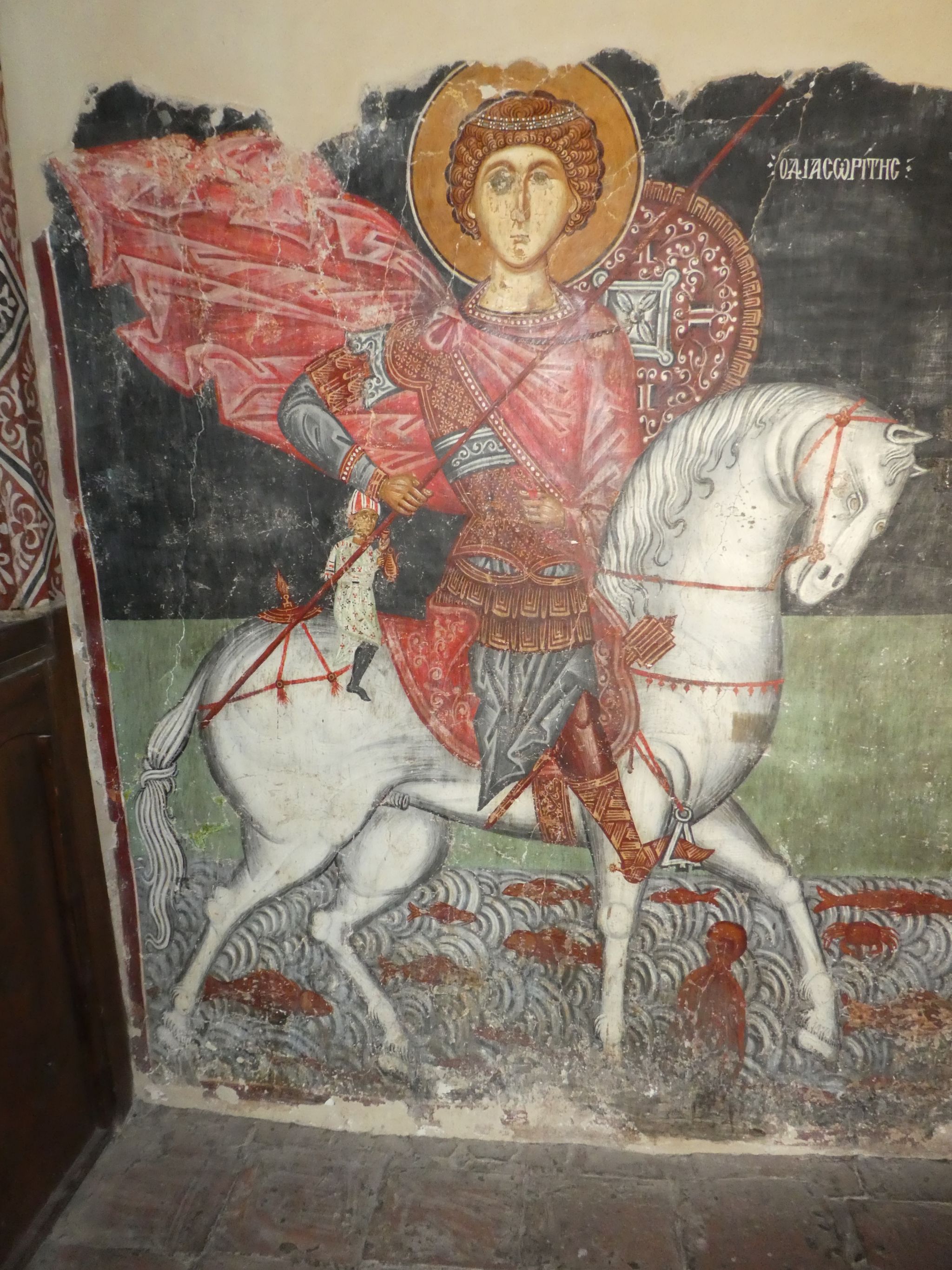 So, in two days, we saw six of the ten listed churches.  The other four were scattered in different directions in a wide arc and it would have been quite an exercise to see them all.   We had seen enough to overcome any FOMO.  Byzantine experts would be able to appreciate subtle differences between the churches which non-experts like us would not even see, but six was enough to get an appreciation of the beauty and decorative intricacy of the churches of this era and the religious dedication of those who created them.   Well worth the road trip.