Sites of interest in the northern part of Cyprus are scattered from the far eastern end of the island to the western end, and public transport is sparse.  So we hired a car and did something akin to a figure of eight from one end of the north to the other.

We’ve covered the trip in one post for convenience, and definitely not as some kind of implied acceptance of the concept of the north as a seperate entity!

Here’s the main points of interest.

Kyrenia and its castle have quite a history.  The city was established by Mycenaean Greeks in 1,200BCE.  Carob has been cultivated in the area around Kyrenia since the 1st century, and from medieval times until the 1960s, Kyrenia was a major port for carob exports to Europe. The carob trade collapsed in the 60s due to falling prices, and the historic harbour is too small for modern ships, which now use a newer port further down the coast.  But the old carob warehouses lining the waterfront have found a second life as tourist restaurants, and the harbour hums with traditional sailing boats taking tourists on cruises.

Most tourists come on day trips from further afield, so come sundown the crowds are gone and the long summer twilight makes it a perfect spot for a fish dinner, a few glasses of raki and some surprisingly good live music. 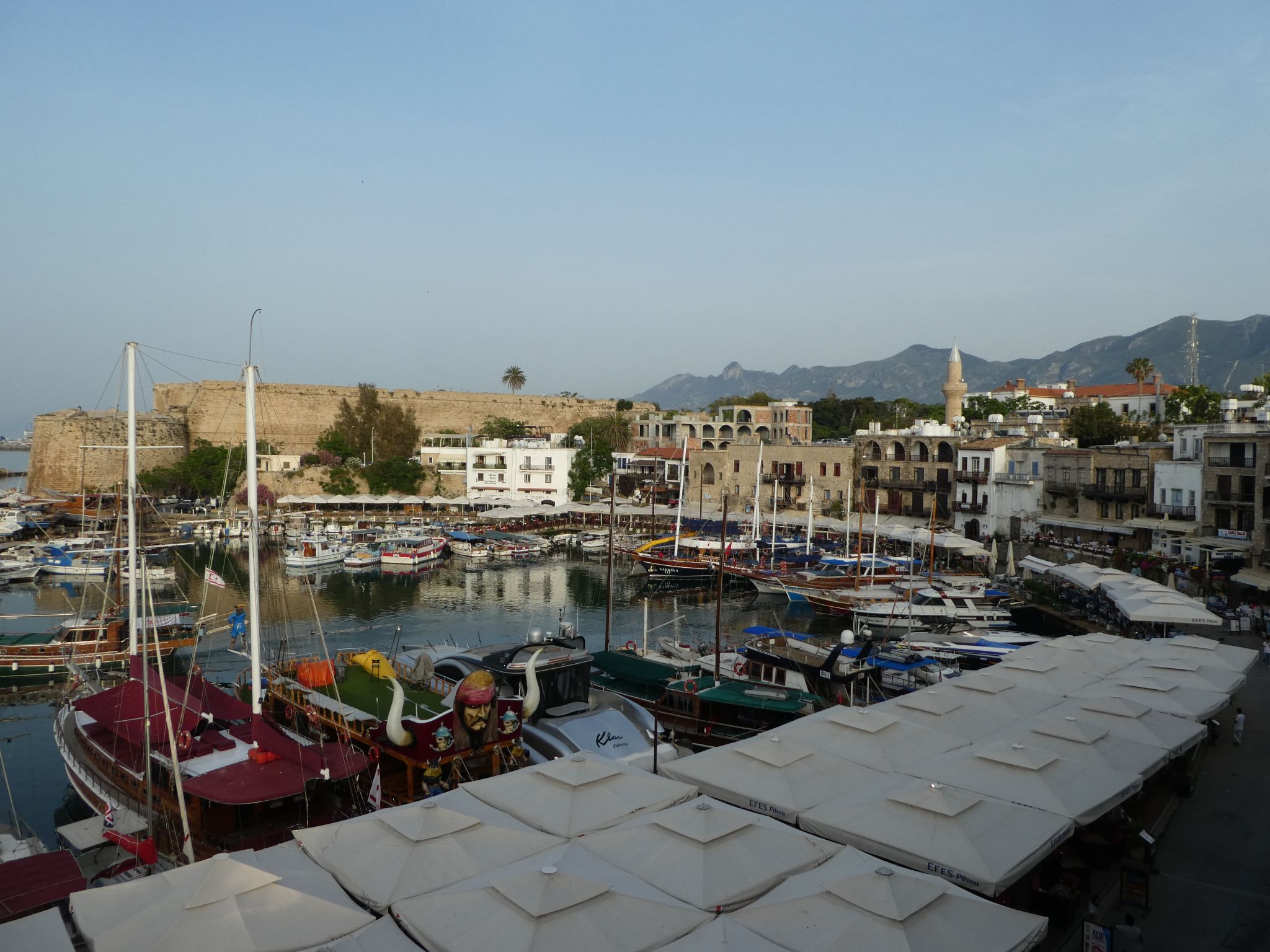 The harbourside castle was built by the Byzantines in the 7th century as a defence against Arab raids.  In 1191, Richard the Lionheart conquered it, along with the rest of Cyprus, after the renegade local governor attempted to kidnap Richard’s sister and his fiancée whilst they were all en route to the Crusades.  Richard later sold it to the Knights Templar, who in turn passed it over to the French when they couldn’t afford to run it anymore.  The Venetians had it for a spell, and then of course the Ottomans. 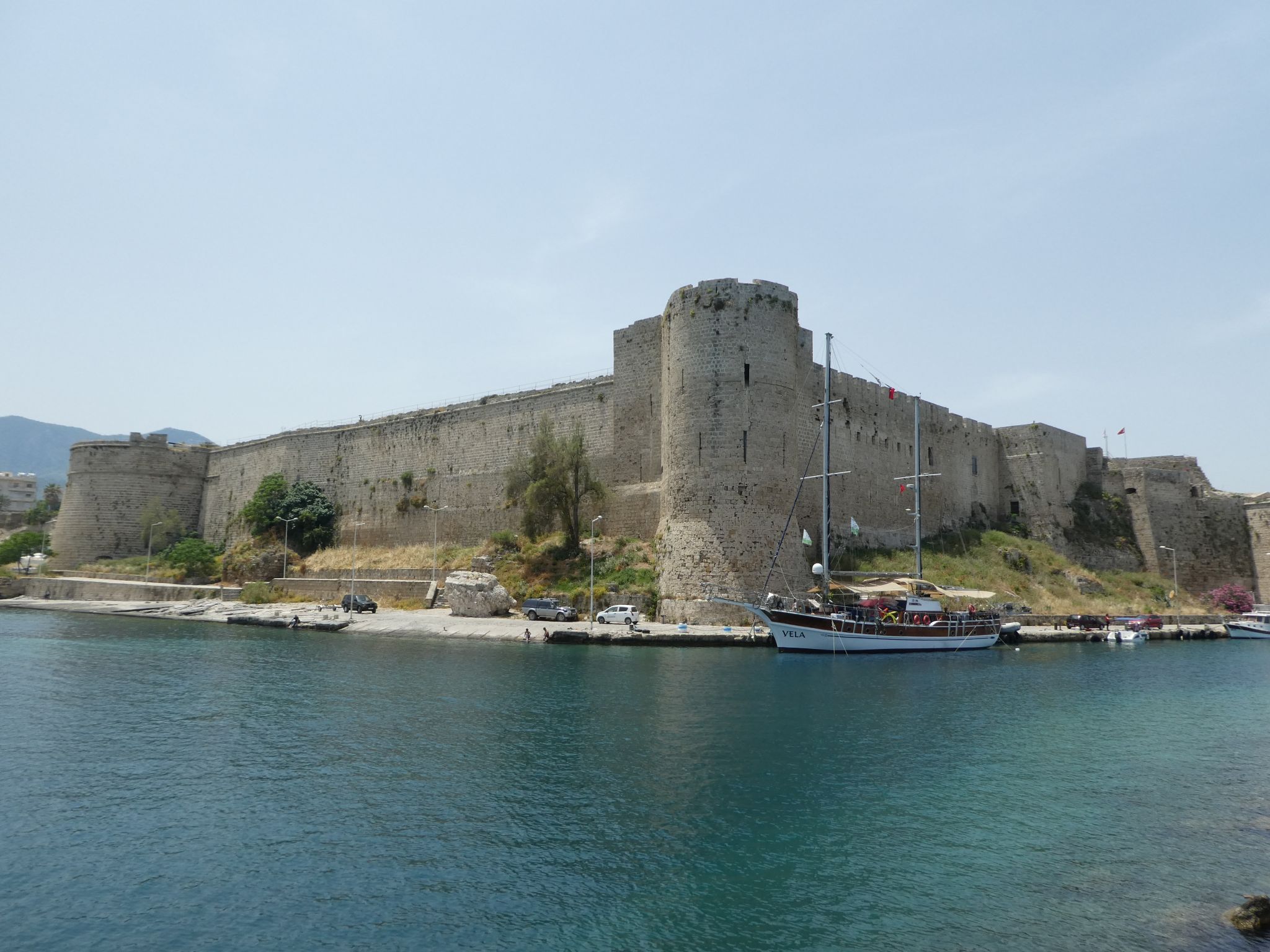 The sprawling castle contains some interesting historical exhibits.  The best is the Shipwreck Museum with just one exhibit – the remains and contents of a wooden-hulled Greek merchant ship which sank off the coast in around 300BCE.

Discovered by a local diver in 1967, it is the oldest shipwreck recovered from Cypriot waters.  The carefully retrieved and reconstructed original hull is on display here, along with some of its cargo of amphorae containing almonds, grain and wine.  After 2,300 years underwater, the nuts and grains, whilst black and obviously inedible, are still whole. 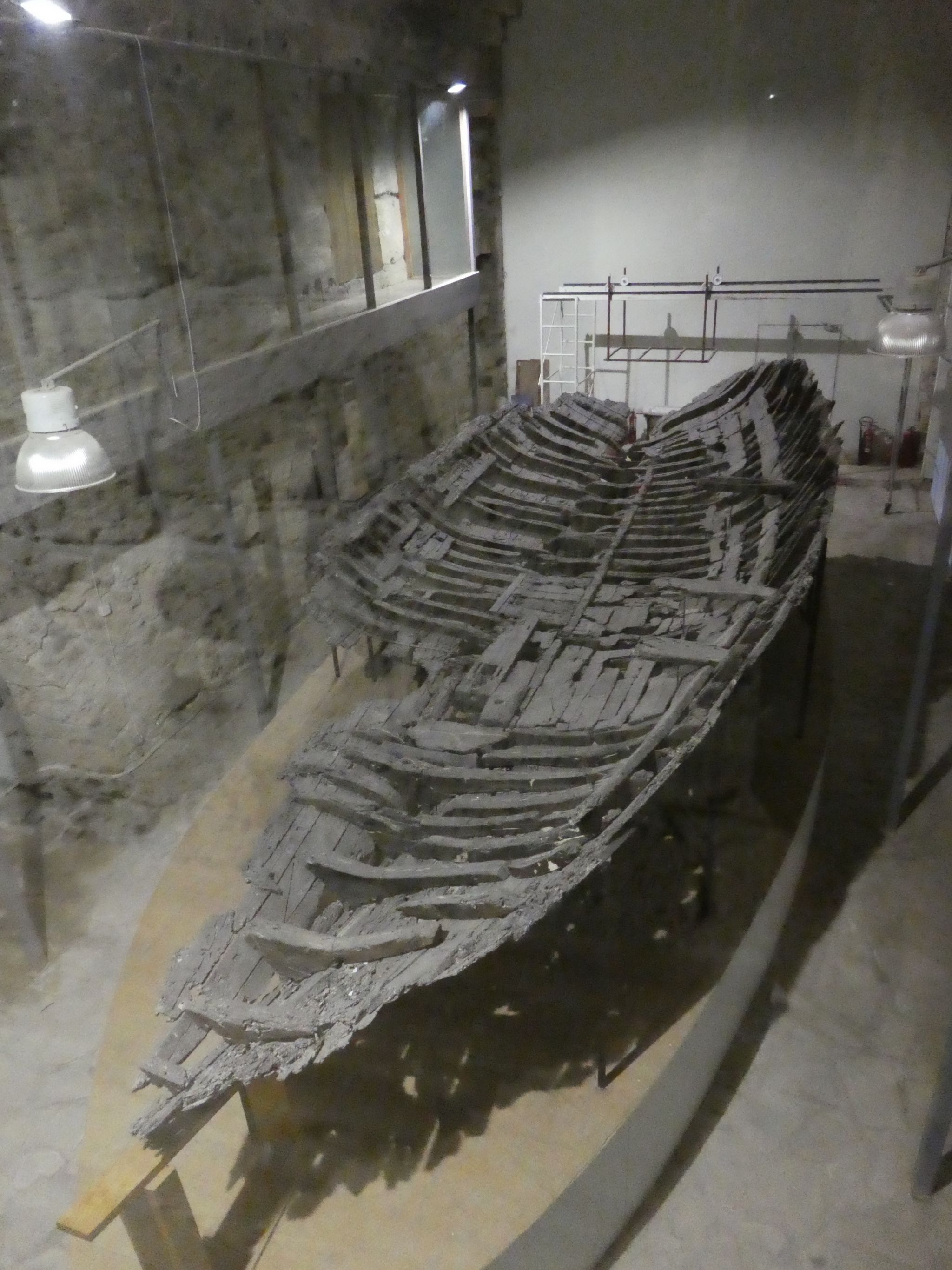 Rising steeply in a ring around Kyrenia is a rugged limestone mountain range.

Augustinian monks fleeing Palestine after the fall of Jerusalem in 1187 came to Kyrenia where the then ruling elite was sympathetic.  As seems to have been their habit (sorry for the bad pun), the monks scurried up the mountains and built an impressive monastery several kilometres above Kyrenia.  They named it Abbeye de la Pais (Abbey of Peace), which was corrupted over time to Bellapais, which came to be the permanent name of the now-ruined abbey and the village which sits with it. 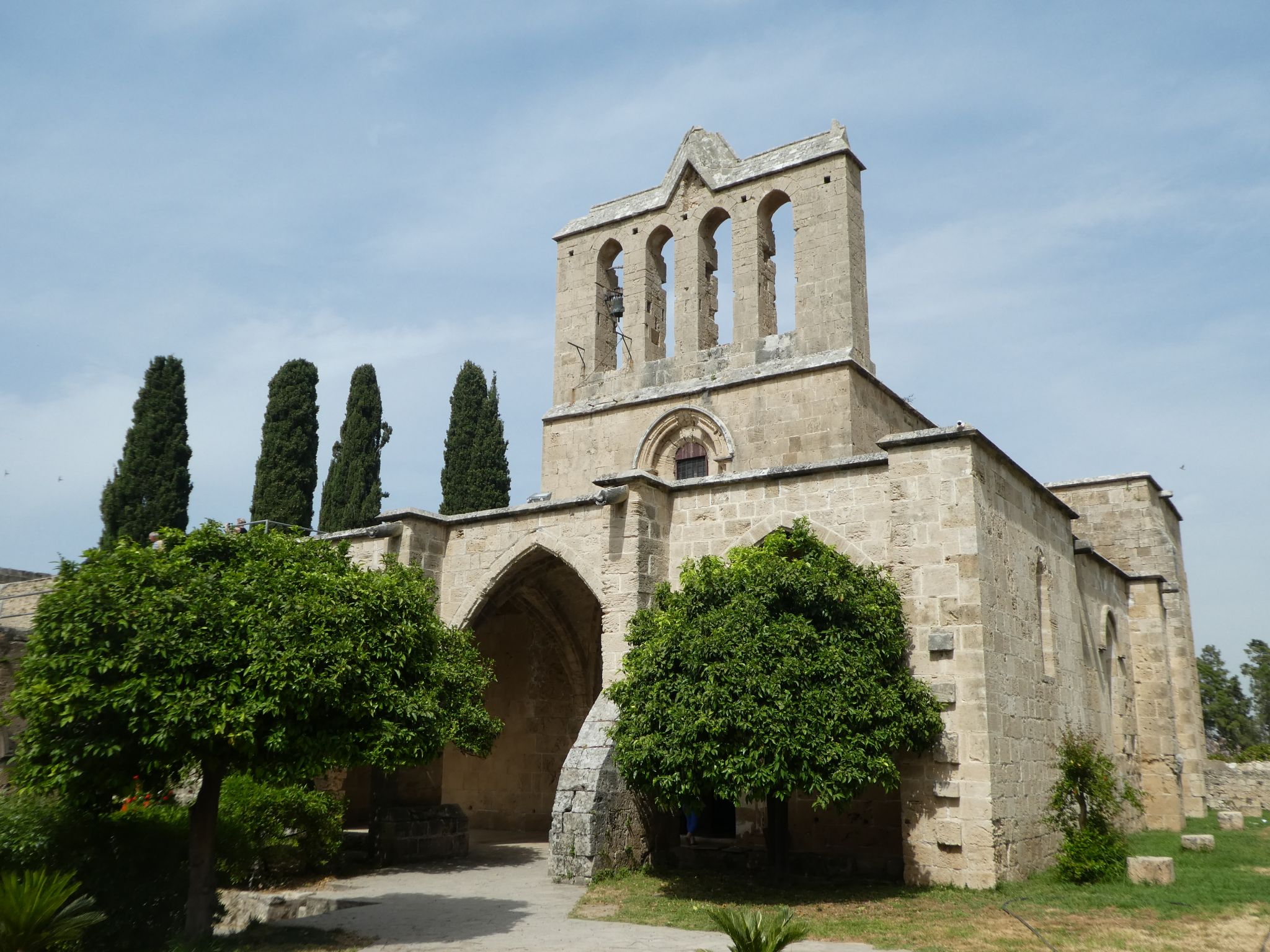 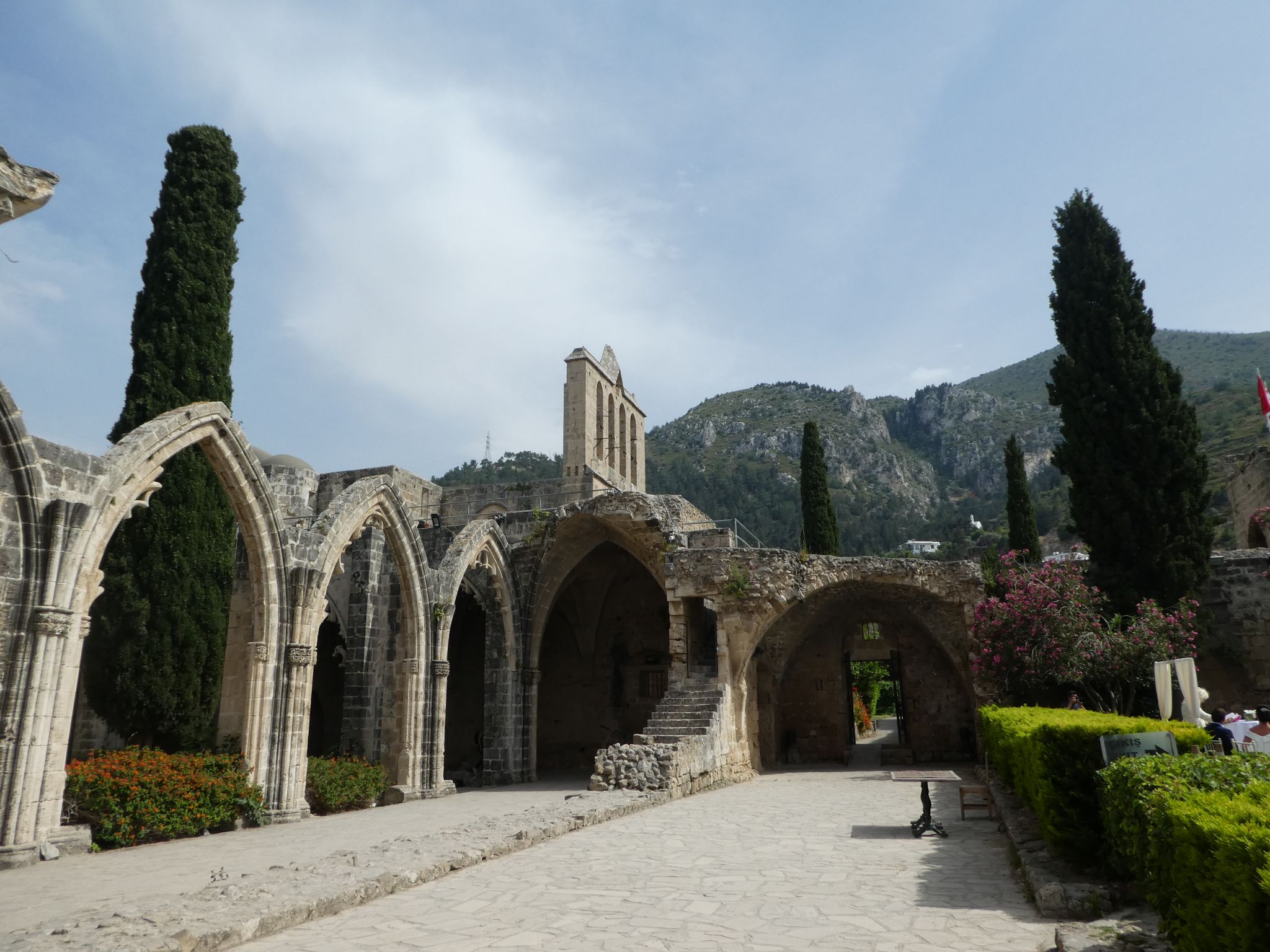 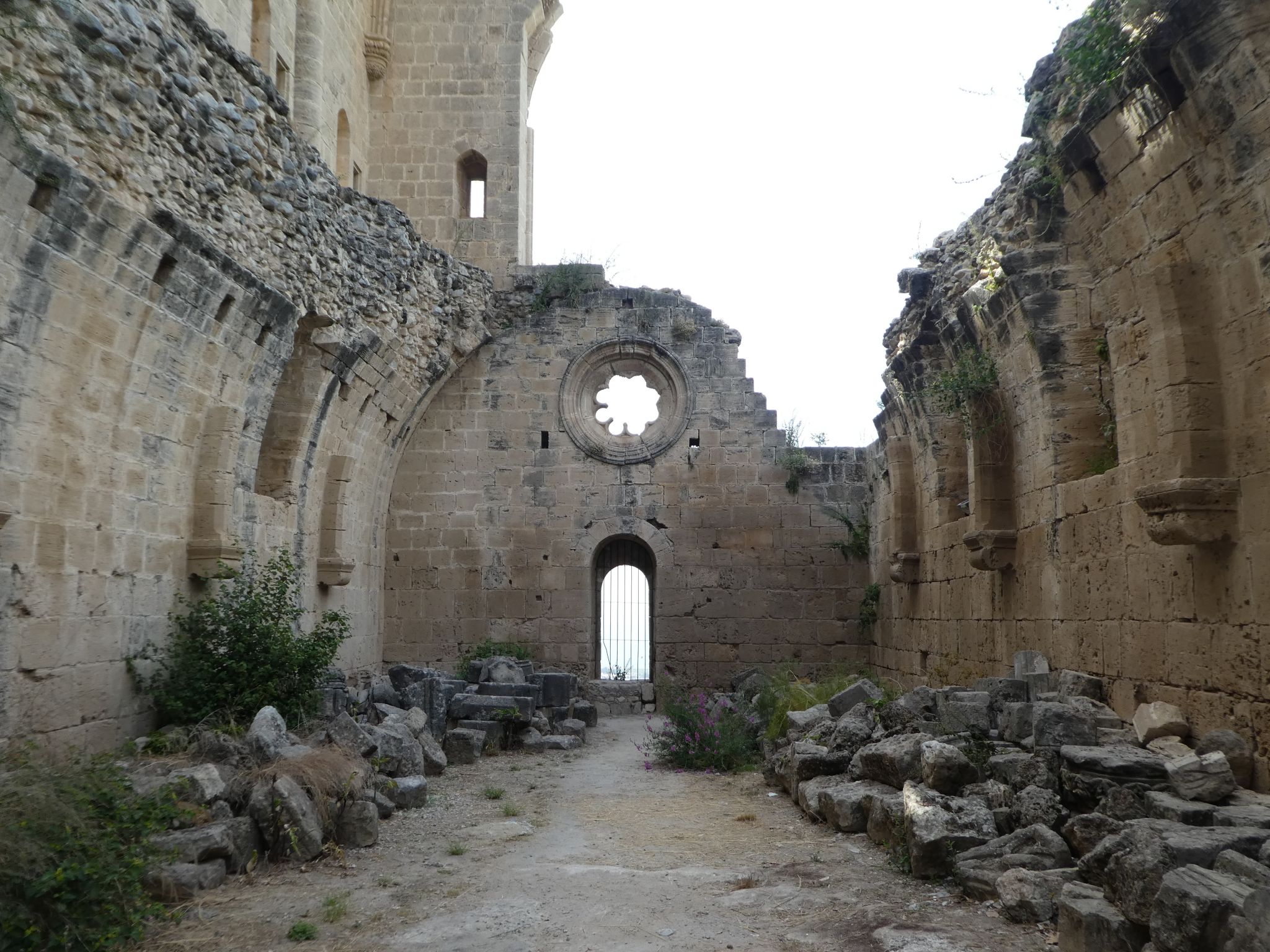 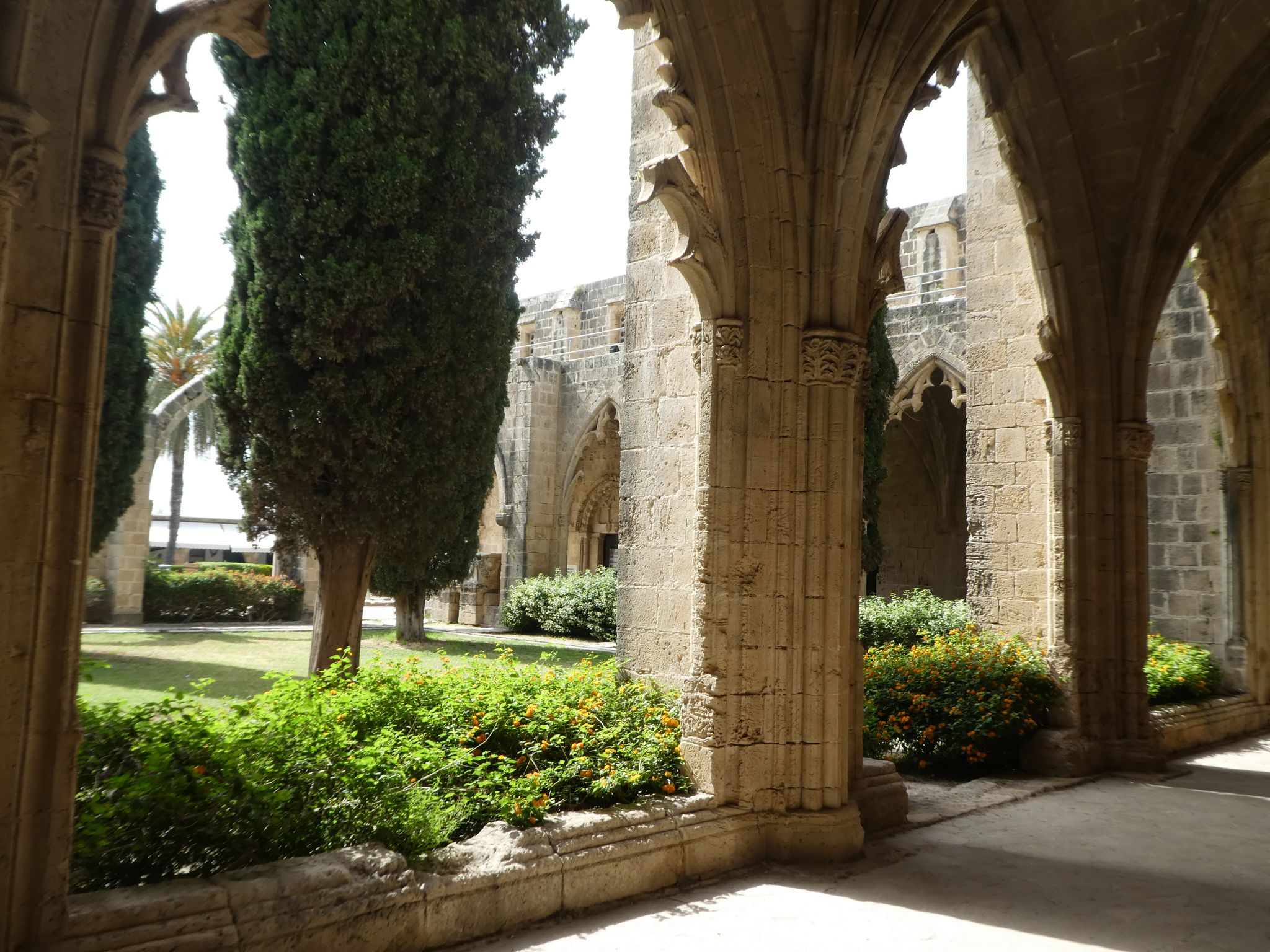 Writer Lawrence Durrell lived in Bellapais in the mid 1950s and his book Bitter Lemons of Cyprus describes his time there.  He tells of a tree in the village square, nicknamed The Tree of Idleness, under which local men would spend hours in idle talk.

He didn’t identify the type of tree, and locals argue furiously as to which of two trees, barely 20 metres apart, is the one in the book.  Whether either is correct is irrelevant.  Shameless association still sells more coffees. 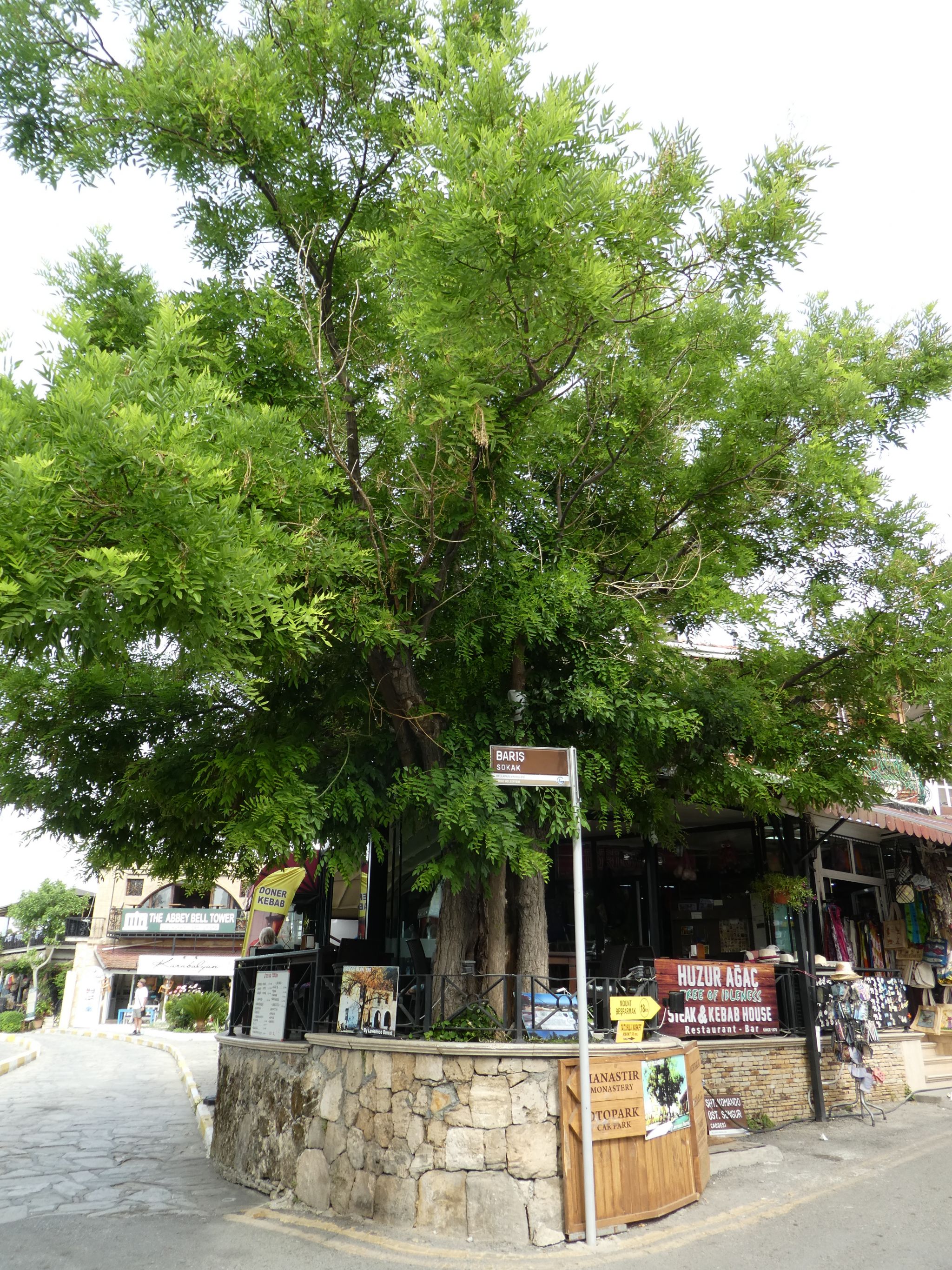 Built along a towering ridge line atop the Kyrenia Range, this castle is named for a monk, Hilarion, who fled persecution in the Holy Land and lived in a cave here, on the pass between Nicosia and the coast.

After his death a church and monastery were built over his grave.  Later a watchtower was built, and later again, the complex was expanded to include a summer palace for the royal court.

Some assert the castle provided the inspiration to Walt Disney for the design of the castle in his animated film, Snow White.  But we’ve read those kinds of claims about lots of castles, so who knows. 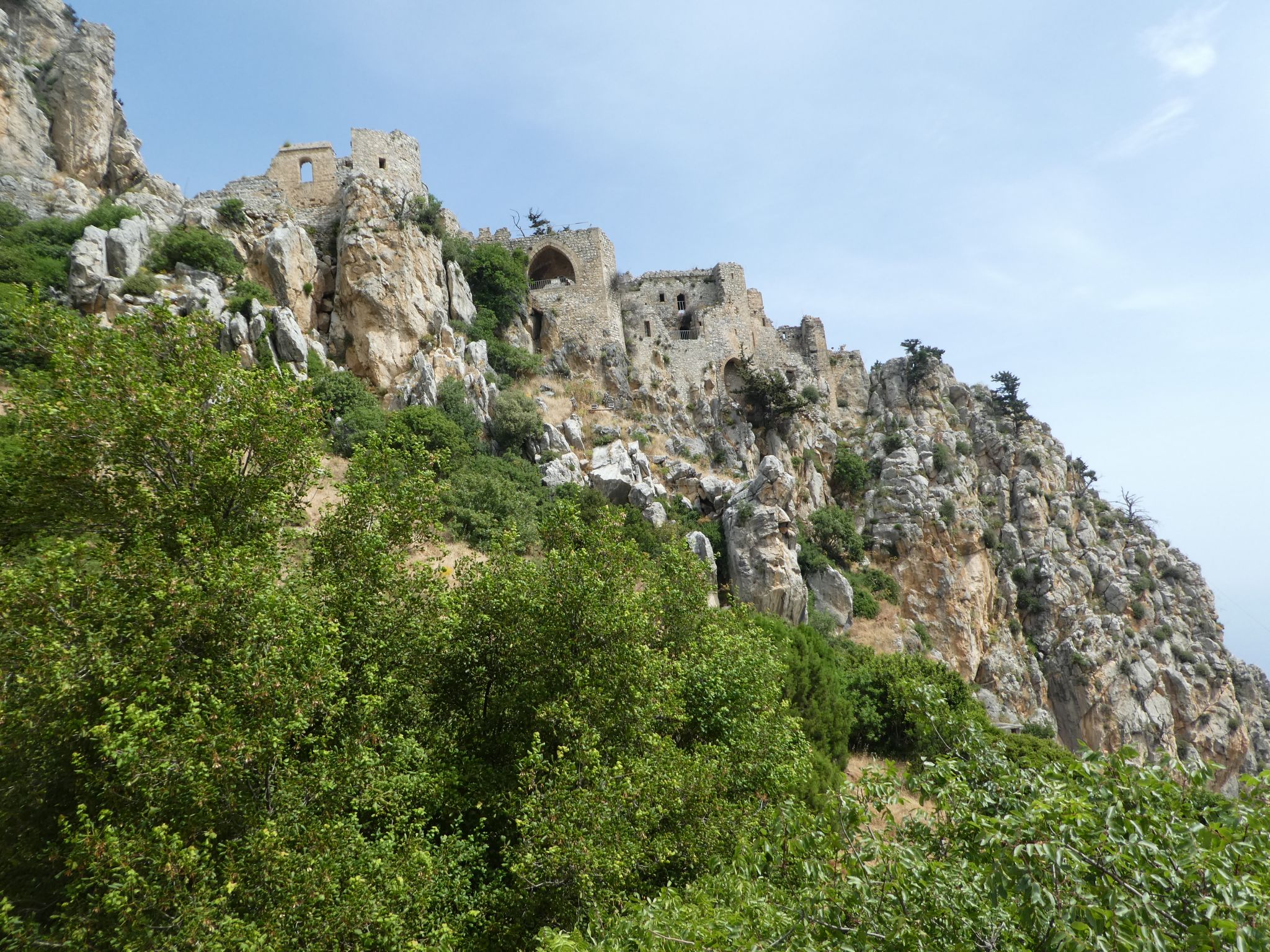 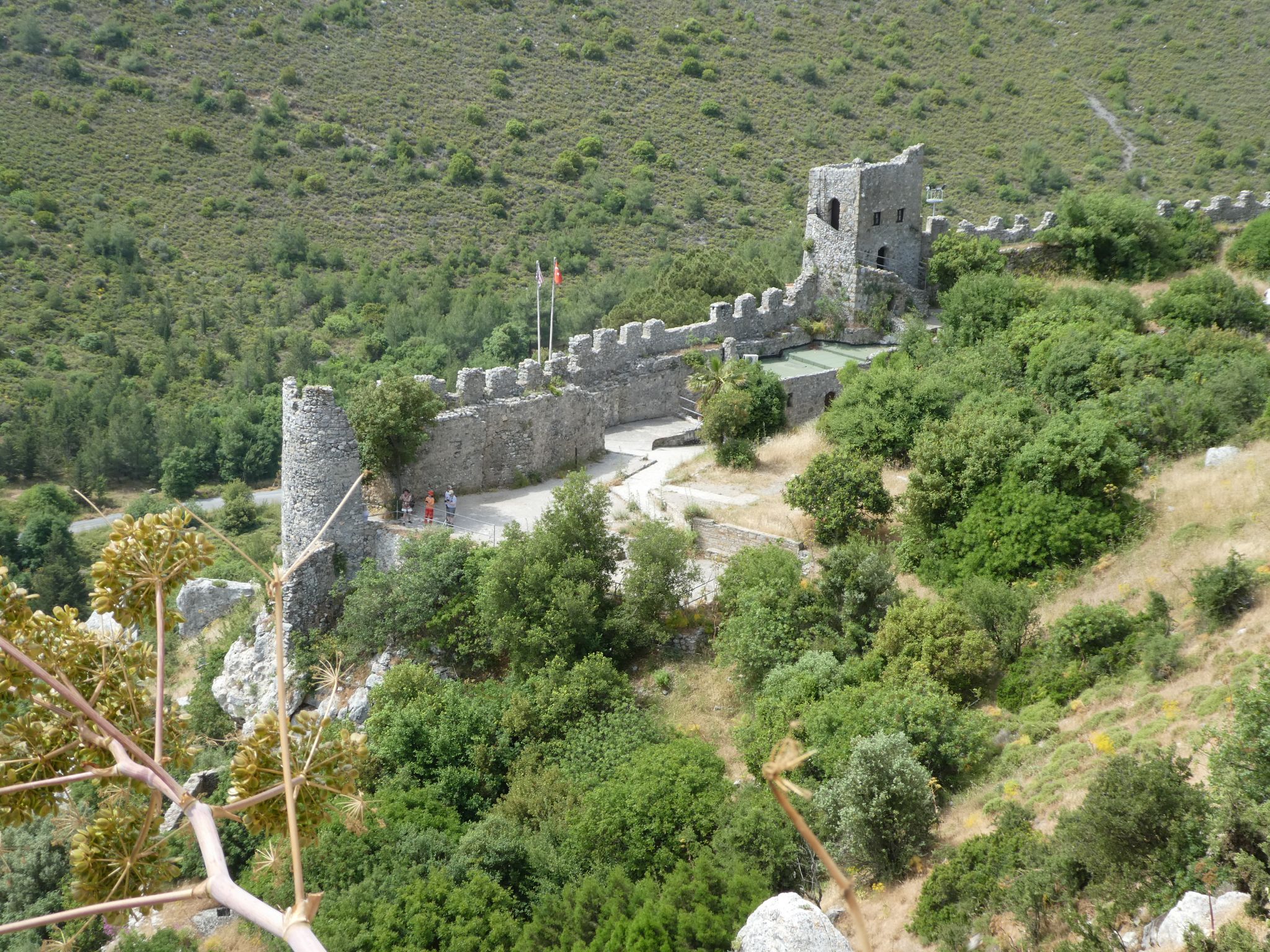 The castle is a ruin now, and climbing through and around the structure is a challenge.  It’s steep, slippery and full of trip hazards to get to the highest point, the ramparts leading to Prince John’s Tower.  But the view from the top is glorious.  On a clear day it is possible to see Turkey, 100kms across the ocean, and even on a hazy day, the view down to the coast and out to sea is worth the climb. 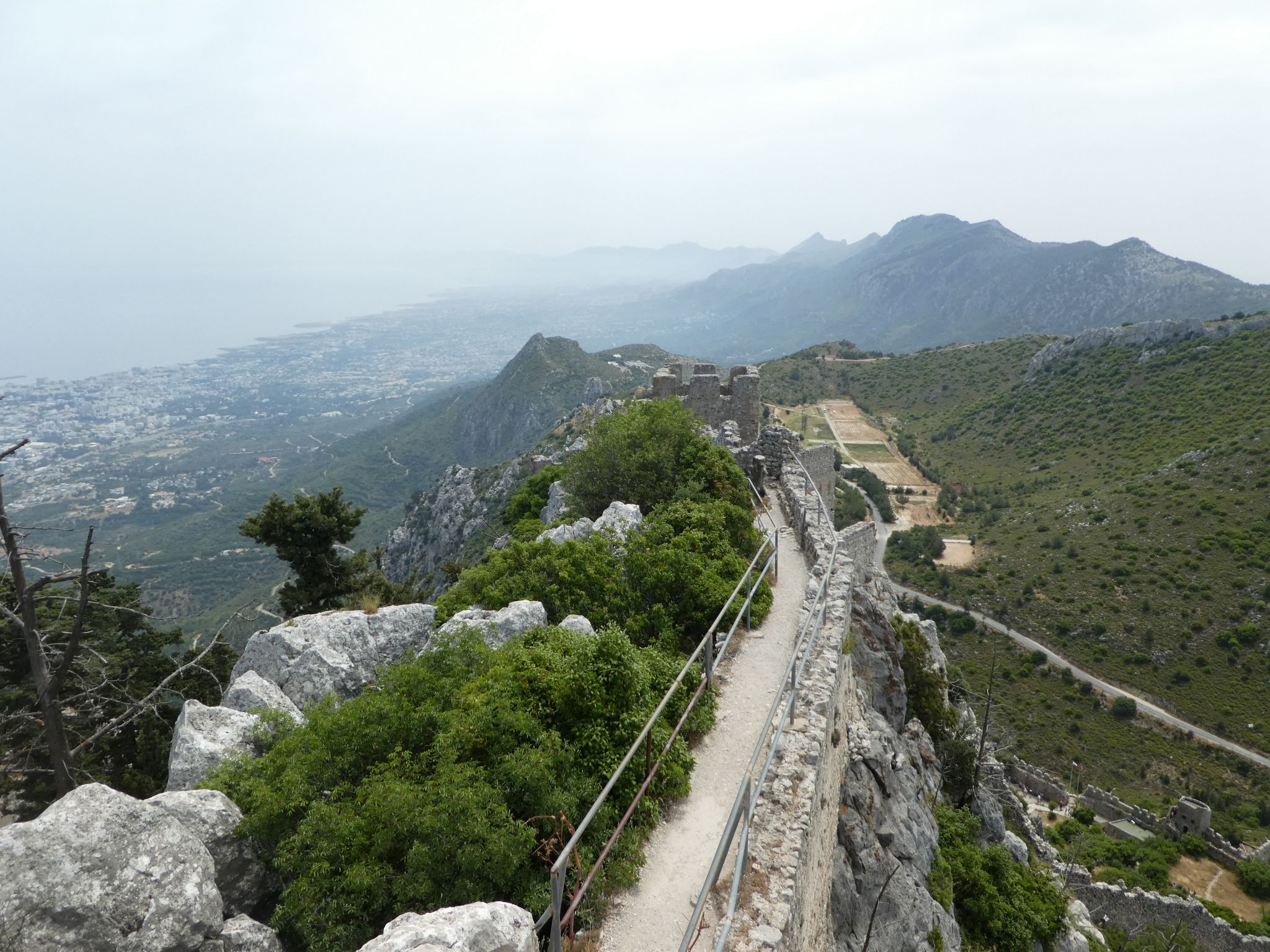 If you love a good conspiracy theory, this place may appeal.  Mavi Kosk (The Blue House) was built for Paulo Paolides, lawyer to Archbishop Makarios III, a leader of the struggle for independence and, ultimately, the first President of Cyprus.

Rumour abounds that Paolides was associated with the Italian mafia, and was involved in gun running with plans for an armed uprising in support of the Greek Cypriot independence struggle.  He disappeared during the Turkish invasion in 1974, some say by using a secret tunnel from the house, and there are rumours he later died in Sicily during a mafia meeting.

These stories seem to have been initiated, or at least spread, by Turkish Cypriots who believed Paolides (and Makarios) supported Cyprus being part of Greece.  He is obviously a sensitive topic for them.   The Turkish military has established a base here, surrounding the house so that to access it you have to go through a military checkpoint and surrender your passport while you visit.

The exterior of the house is not lavish, resembling a largish Greek style villa. 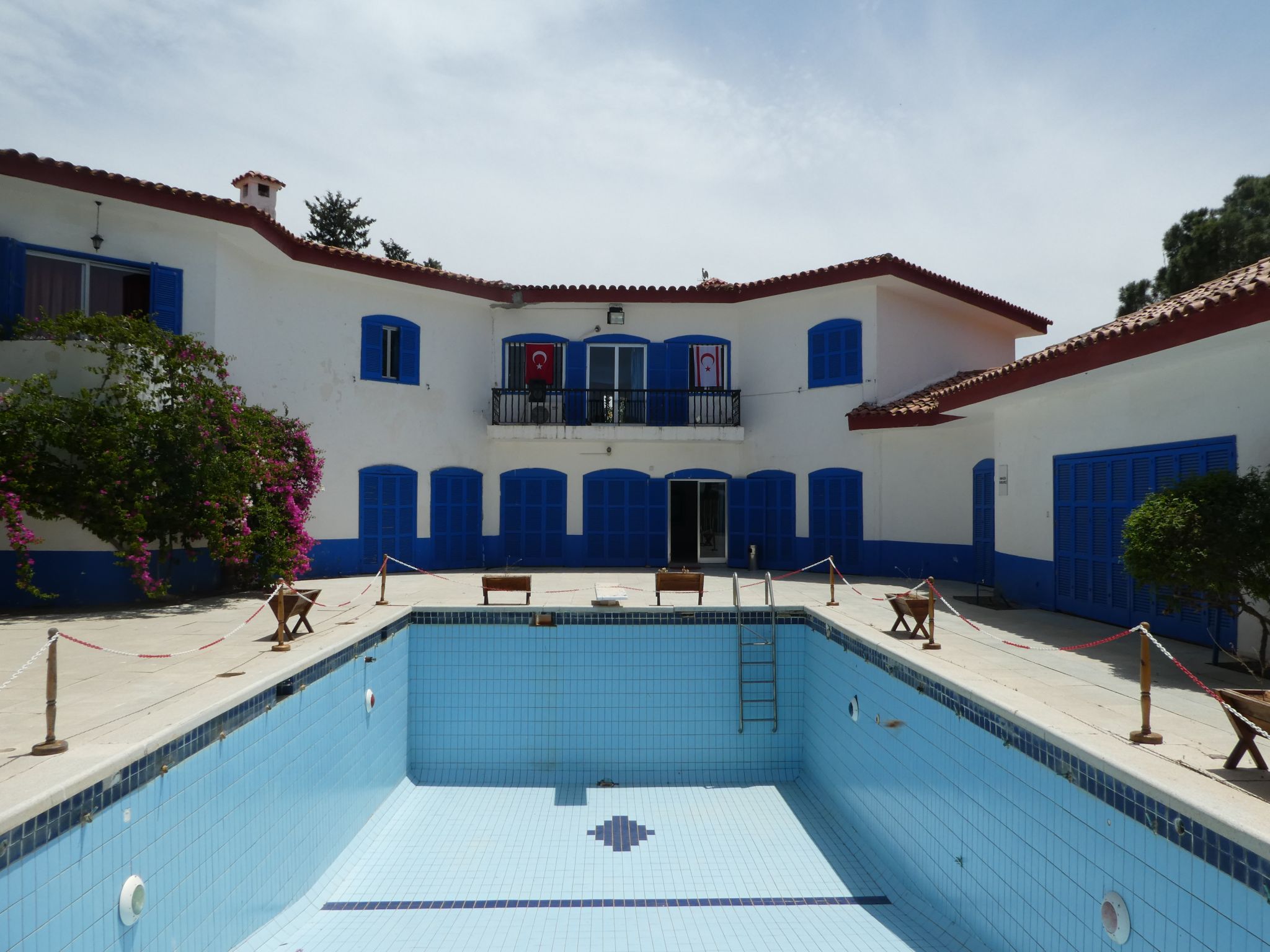 We had read that internally the house is a vision of splendid eccentricity and full of gaudy touches.  Unfortunately photos are not allowed inside.  There are some odd things in the house, like a drinks cabinet covered in chameleon skin, but for the most part it’s really just 60s kitsch.  Not in a cool Mad Men kind of way.  More like just bad taste.  And the place is not lavish.  We were left thinking that if Paolides was a gangster, he wasn’t a very financially successful one.

Now here is something definitely unique.  St Mamas is the patron saint of tax evaders and ENT surgeons.  No jokes correlating the two practices, please.

According to the Cypriot Orthodox tradition, Mamas was a poor hermit who lived in a cave near the town of Guzelyurt.  The local overlord of the time, a Byzantine duke, demanded taxes, which Mamas refused to pay on the grounds that he lived in a cave.  The duke sent soldiers to arrest him and as they were bringing him back to town, Mamas saw a lion attacking a lamb.  He escaped the soldiers, saved the lamb, then rode into town on the lion’s back, carrying the lamb in his arms.  The duke was so impressed, he exempted Mamas from taxes for life.

When Mamas died, he was interred in a stone sarcophagus, which sits in the Church of St Mamas in Guzelyurt.  During the Ottoman period, would-be tomb robbers bored holes into the side, believing there would be treasure within.  Instead, a substance oozed from the holes and they abandoned their attempt.   When we visited a slimy substance was indeed oozing from the hole in the stone, now discreetly shielded by a wooden flap, and there’s an industrial non slip mat on the floor to catch the ooze.

Devotees believe the substance can provide miracle cures for disorders of the ears.  Hence the connection to ENT surgeons. 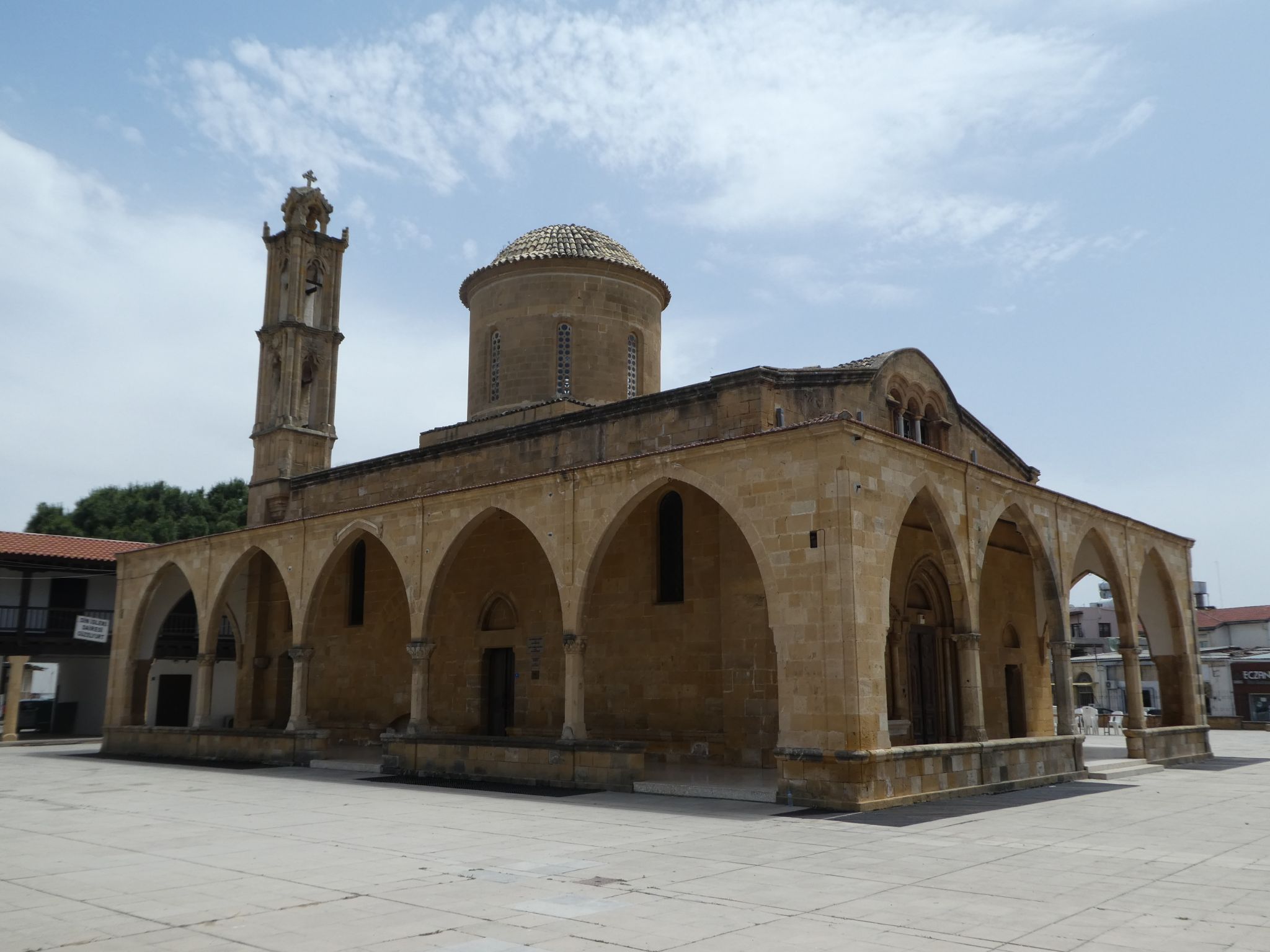 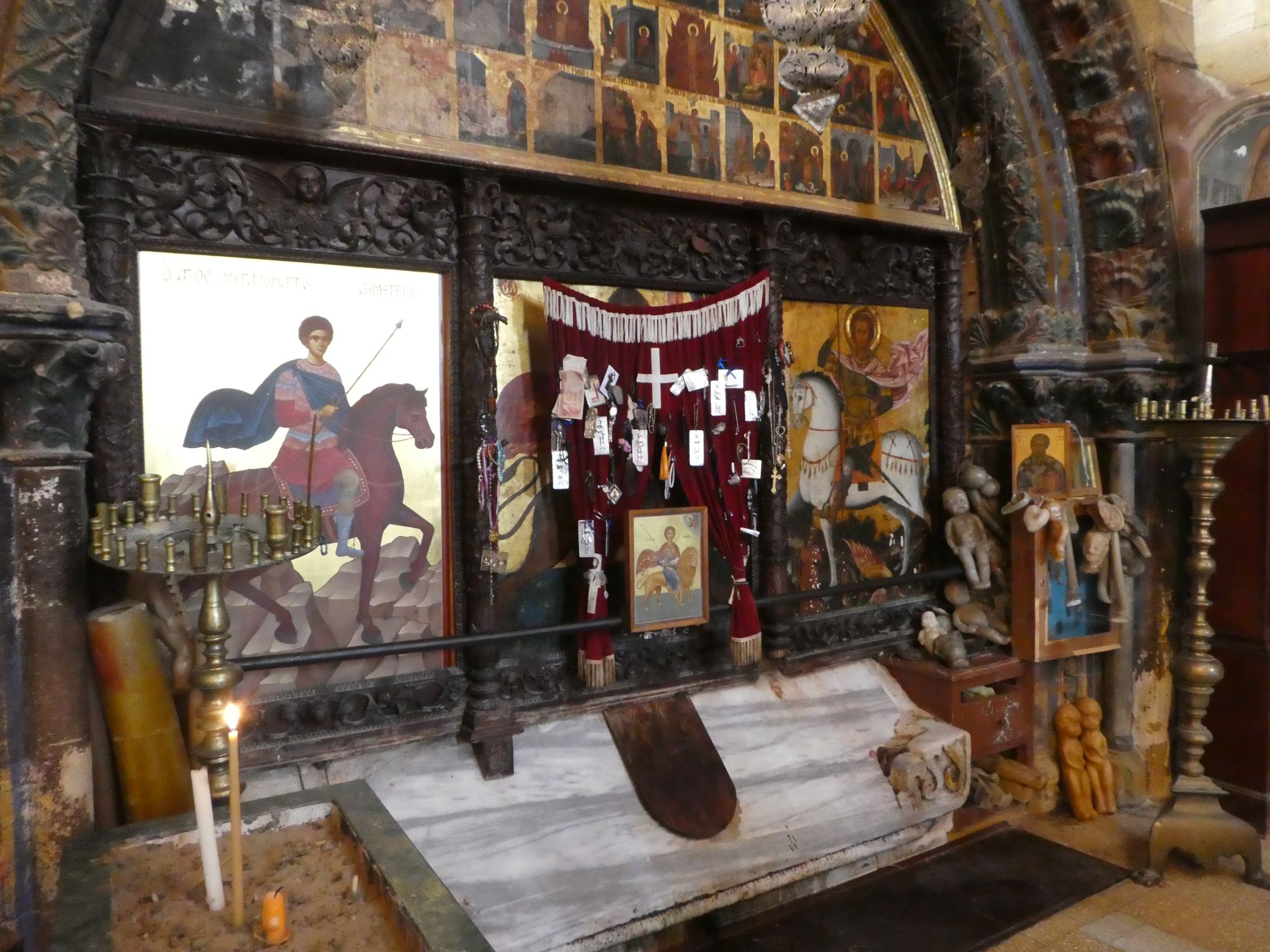 No, it’s not something you might find in the back of a refrigerator in a dodgy delicatessen.  It is ‘one of Cyprus’ premier archeological sites’, or as John says ‘premier piles of rocks’.

Salamis was founded in around 1180BCE by Teucer, son of the king of Salamina on mainland Greece, who found himself unable to return home from the Trojan Wars after failing to avenge the death of his more famous brother, the hero Ajax.

The kingdom of Salamis endured for centuries under a series of different empires, but eventually sank into oblivion when its harbour silted up in about the 7th or 8th century.

The site is vast.  There are some completely excavated and restored parts of the site. 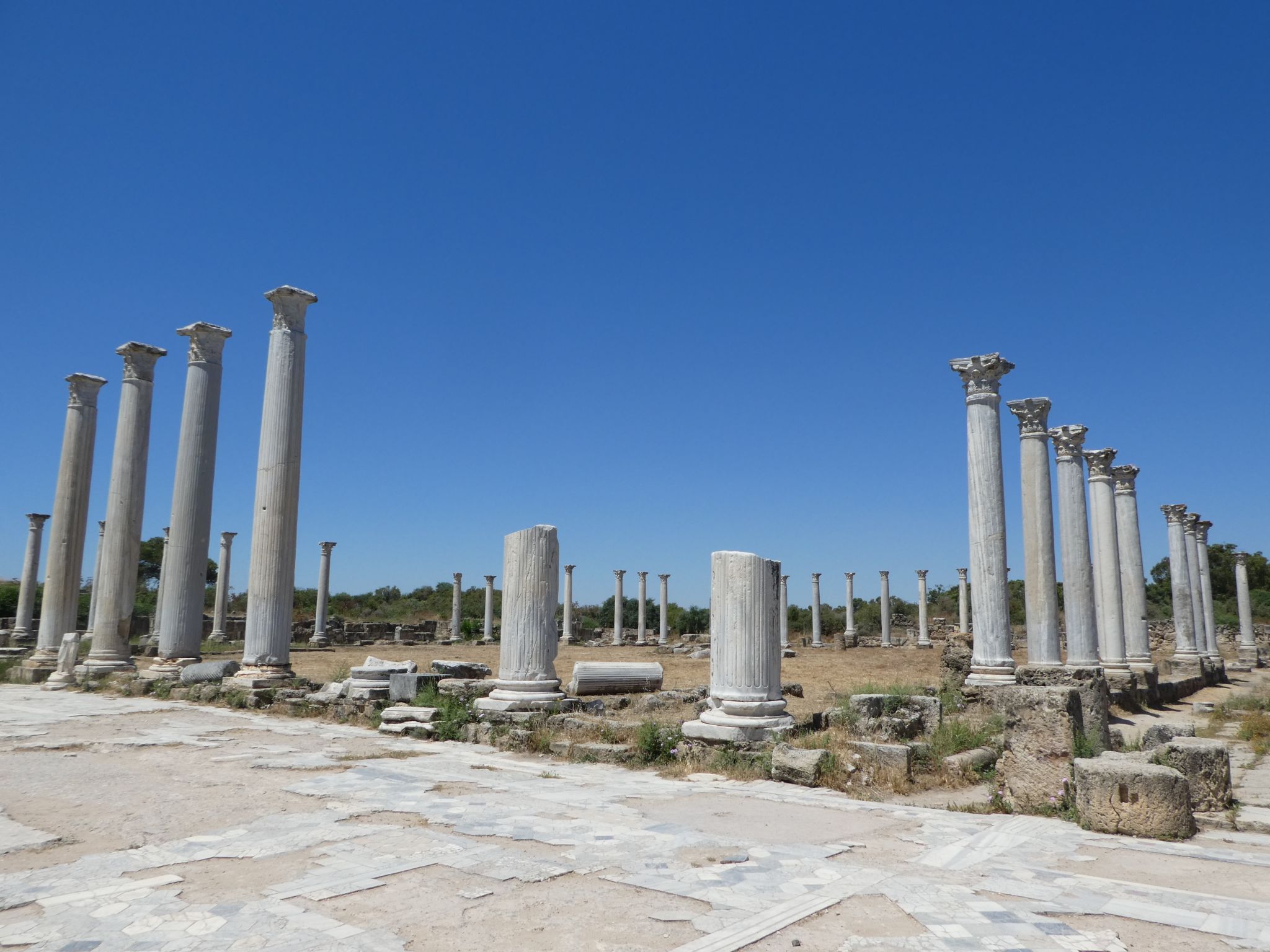 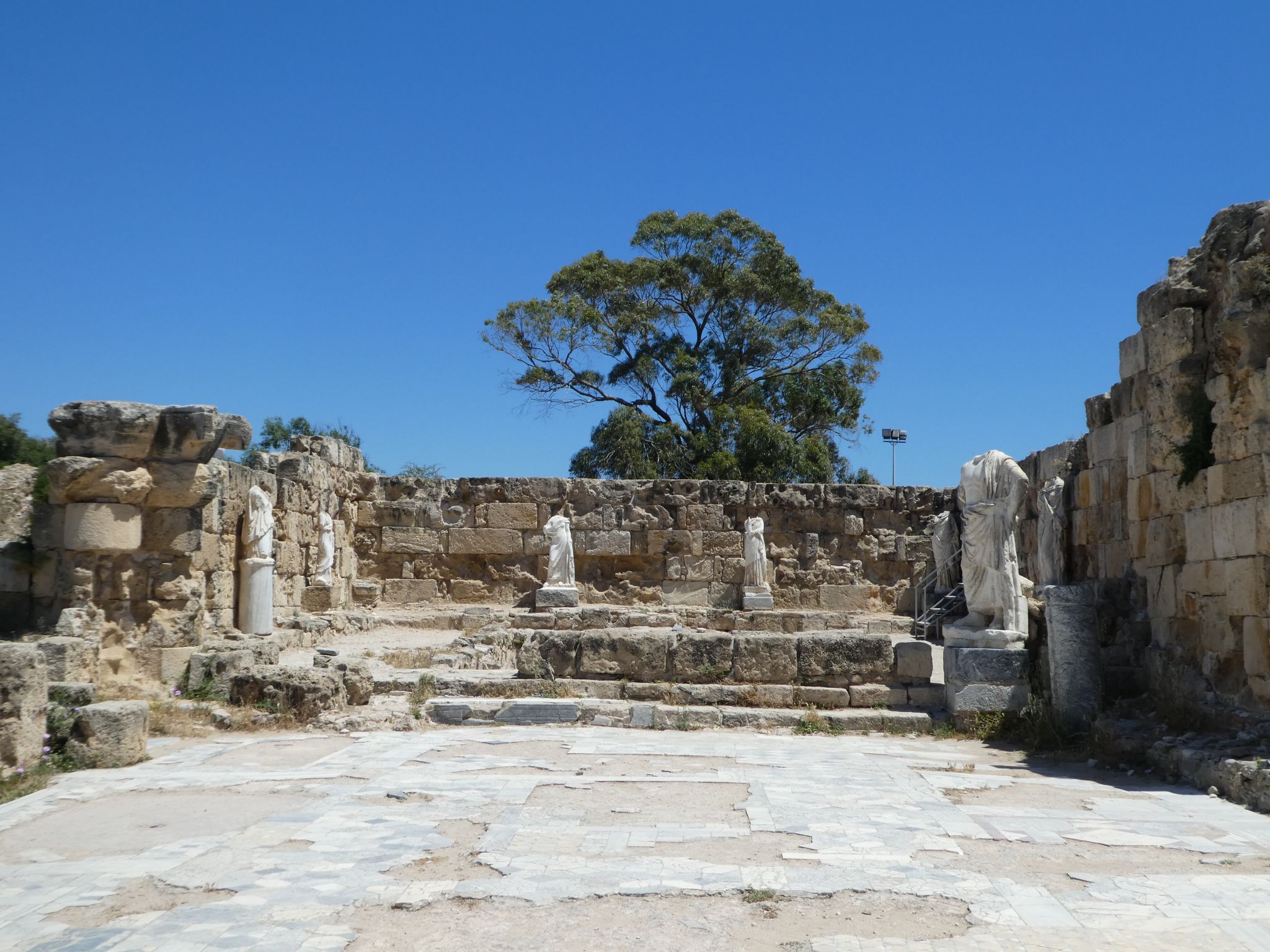 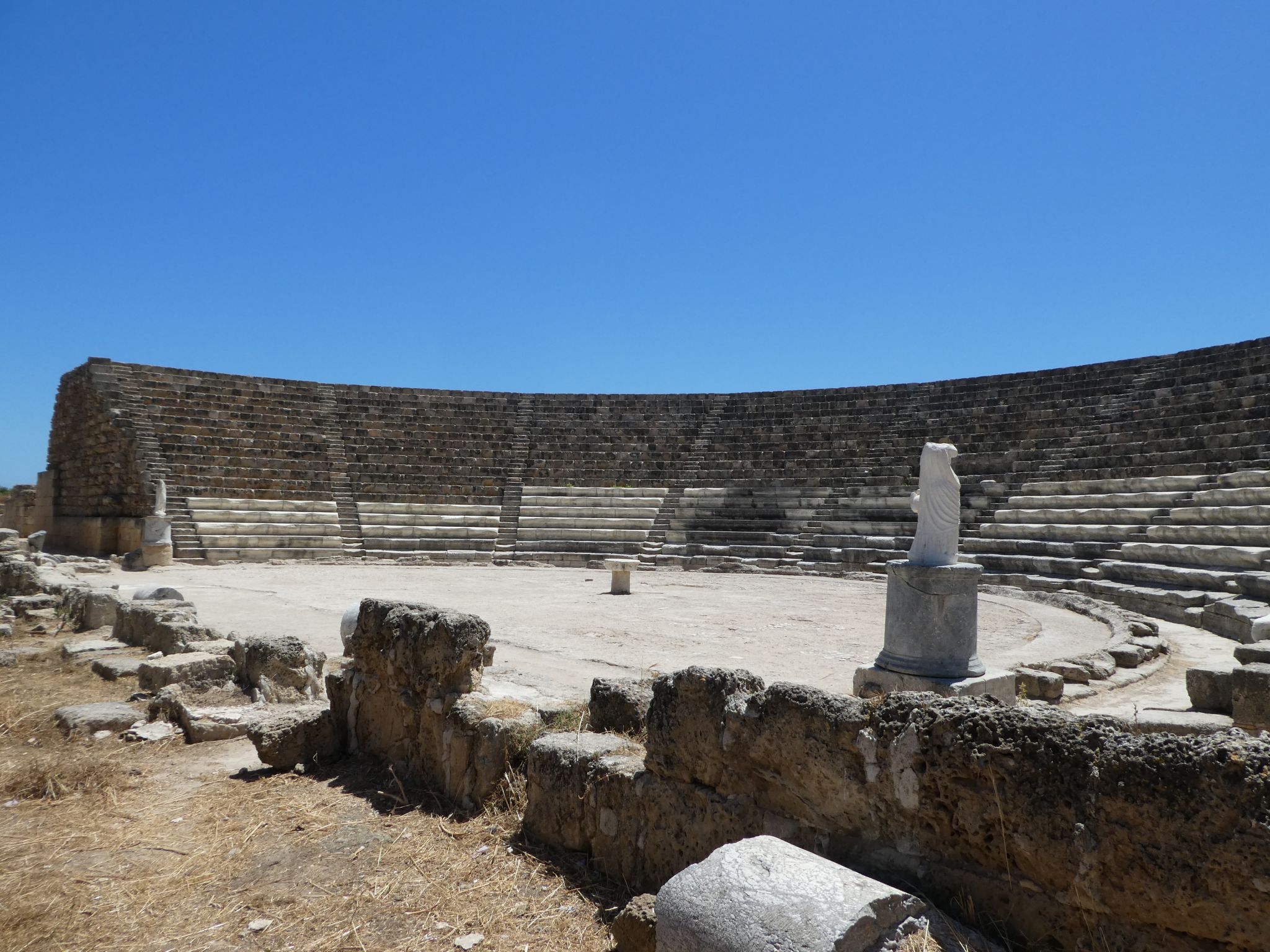 And in addition you can walk for hours in the blazing sun following paths to overgrown pits and mounds of stone blocks whose information boards endeavour to convey the lost magnificence of buildings long collapsed or whose stones were pilfered over the centuries for other buildings works. 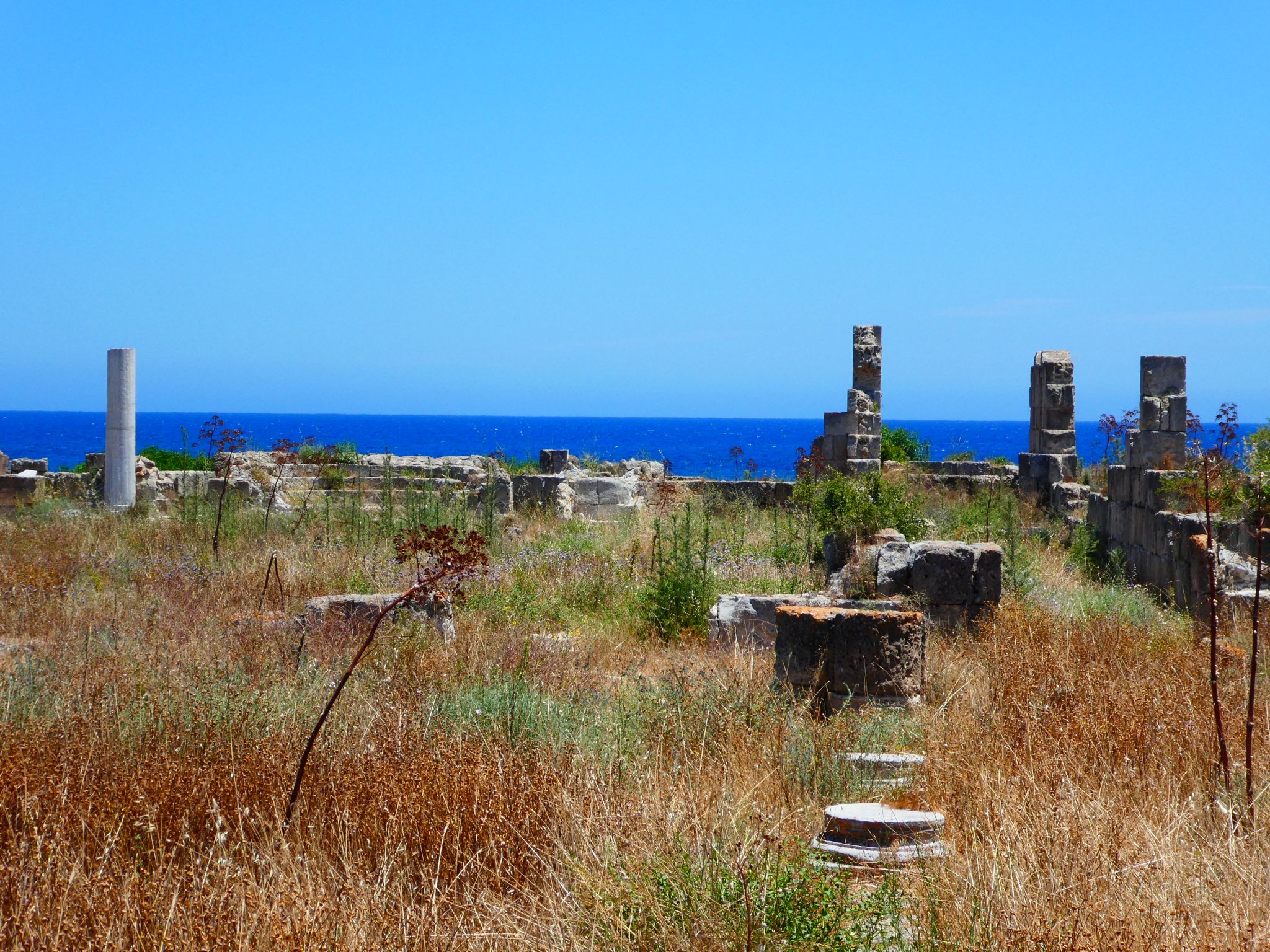 And lastly, the gorgeous walled town centre of Famagusta, once Cyprus’ most lavish city.  Famagusta was a small place until the arrival of large numbers of Christians fleeing the Holy Land after the destruction of Acre in 1291.  Famagusta flourished as the region’s major shipping port.  Immense wealth flooded in.  The city developed a reputation for excesses, and not in a good way.  To counter balance this, many opulent churches were built.

This one was modelled on the Cathedral of Notre Dame in Reims, France.  Note the minaret on the left side – in 1954 it was repurposed as a mosque. 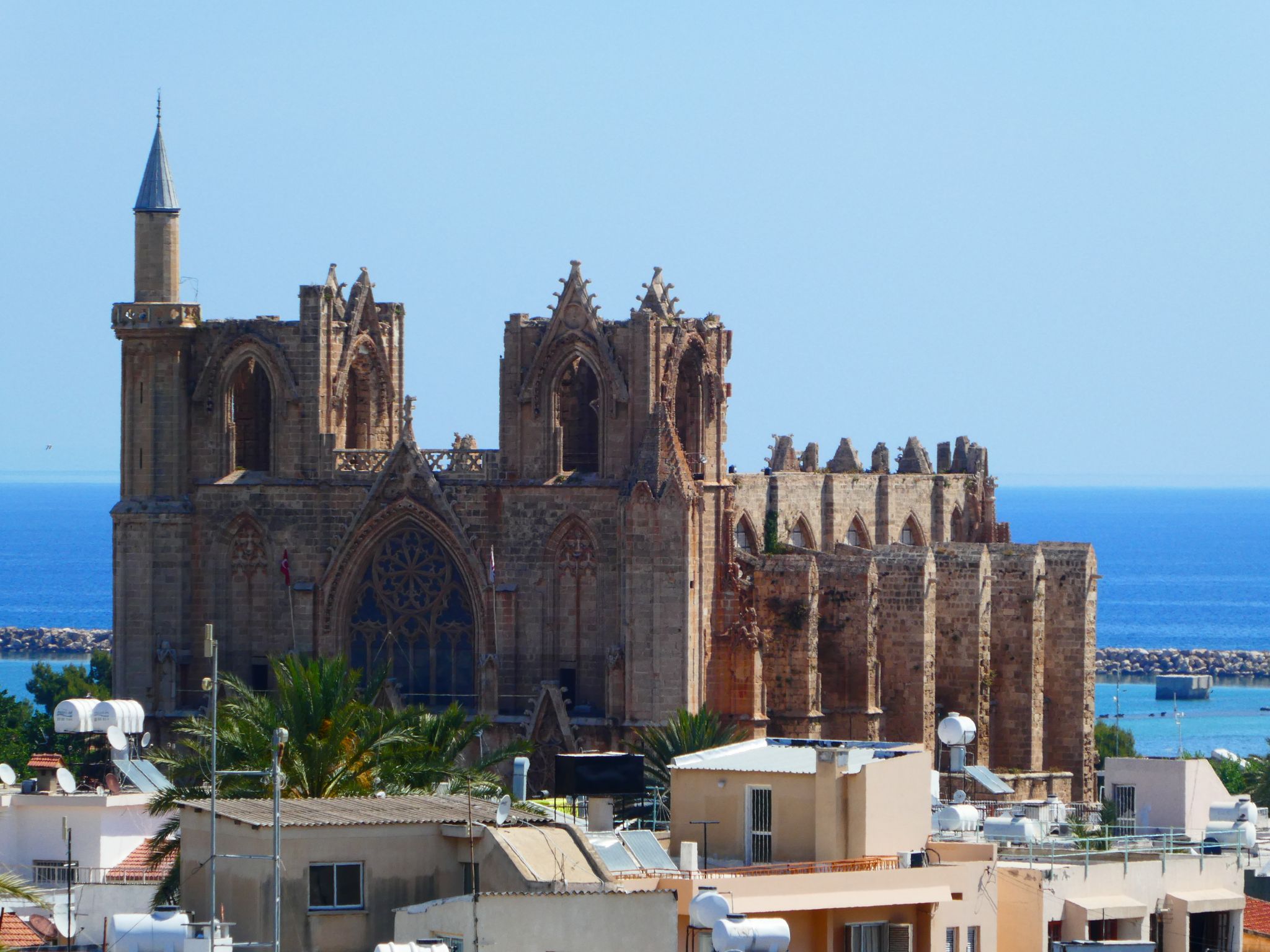 In the 15th century, the city was fortified with immense walls and bastions to protect against Ottoman invasion. 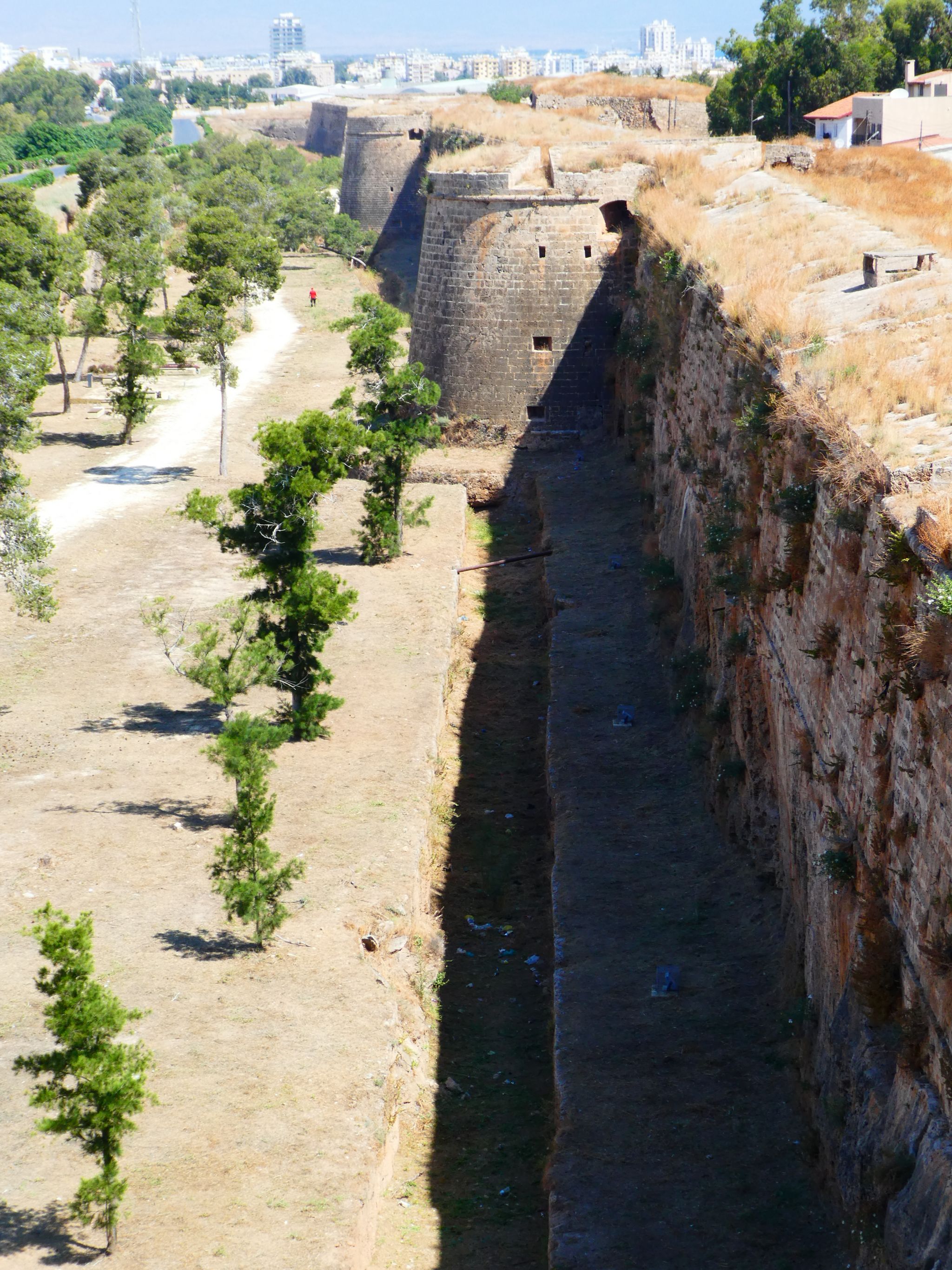 To no avail.  In 1571, the city fell to the Ottomans following a 10 month siege during which approximately 100,000 cannonballs were fired.  By the end of the siege, many of the churches and most of the city’s other buildings were nothing more than burned out shells.

Under the Ottomans, the old city was never restored.  A new city grew up outside the walls, leaving the old city a Gothic ruin frozen in time.  It has only been in the last decade or so that money, and a great deal of it, has been funnelled into restoring the old city and its historic buildings.  There are guest houses, coffee bars and lots to see. 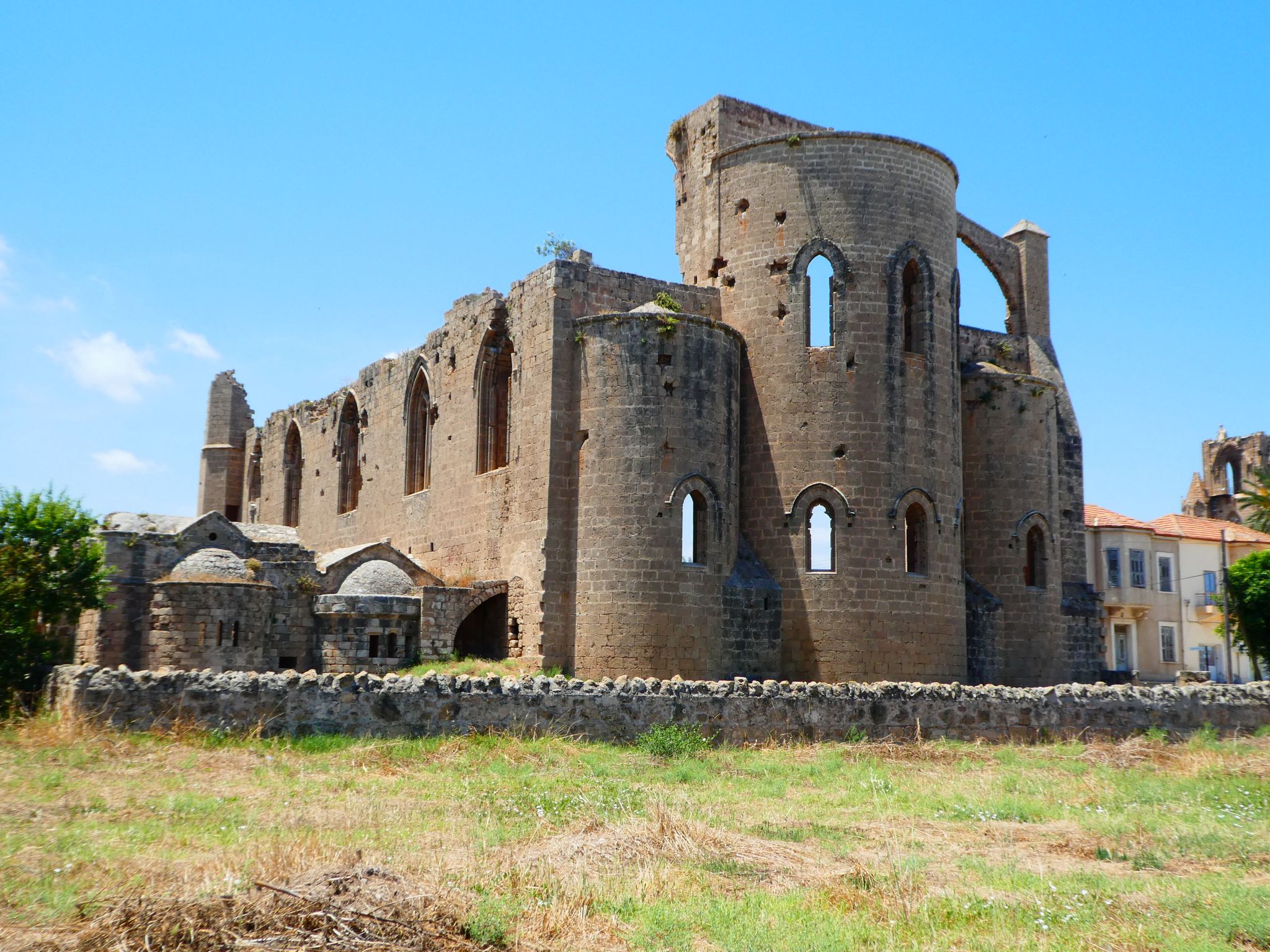 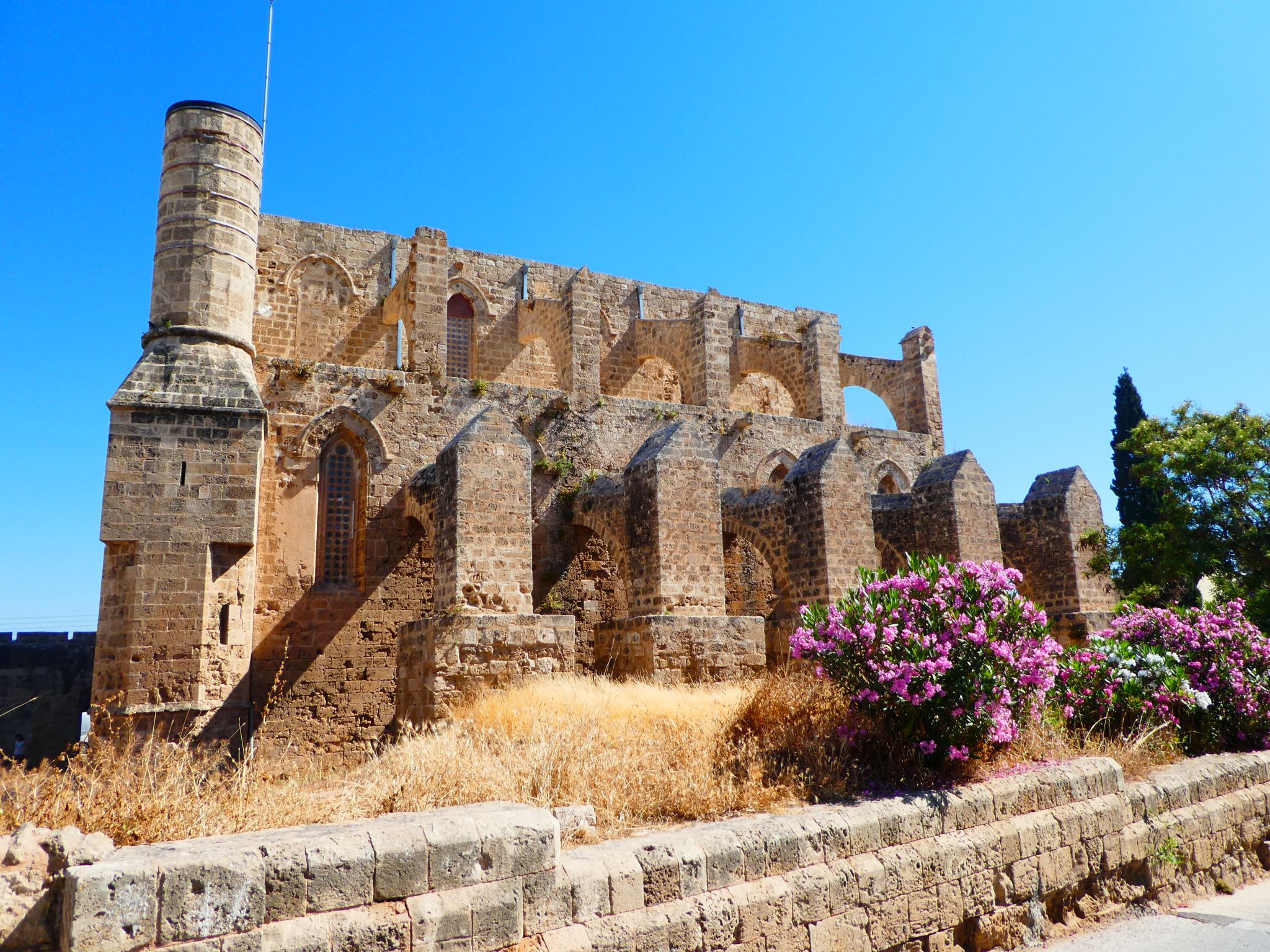 And in a sad irony, not far from here is a modern day repeat of the same cycle of violence.   By the 1960s the new part of Famagusta had become a glamour beach destination.  But it was bombed badly in the Turkish invasion and the barricade between north and south runs right through what was previously the most expensive beachfront in the country.  A no man’s land of bombed out holiday hotels, apartments and homes remains behind barbed wire, literally next to new beach bars, on some of the best real estate on the coast. 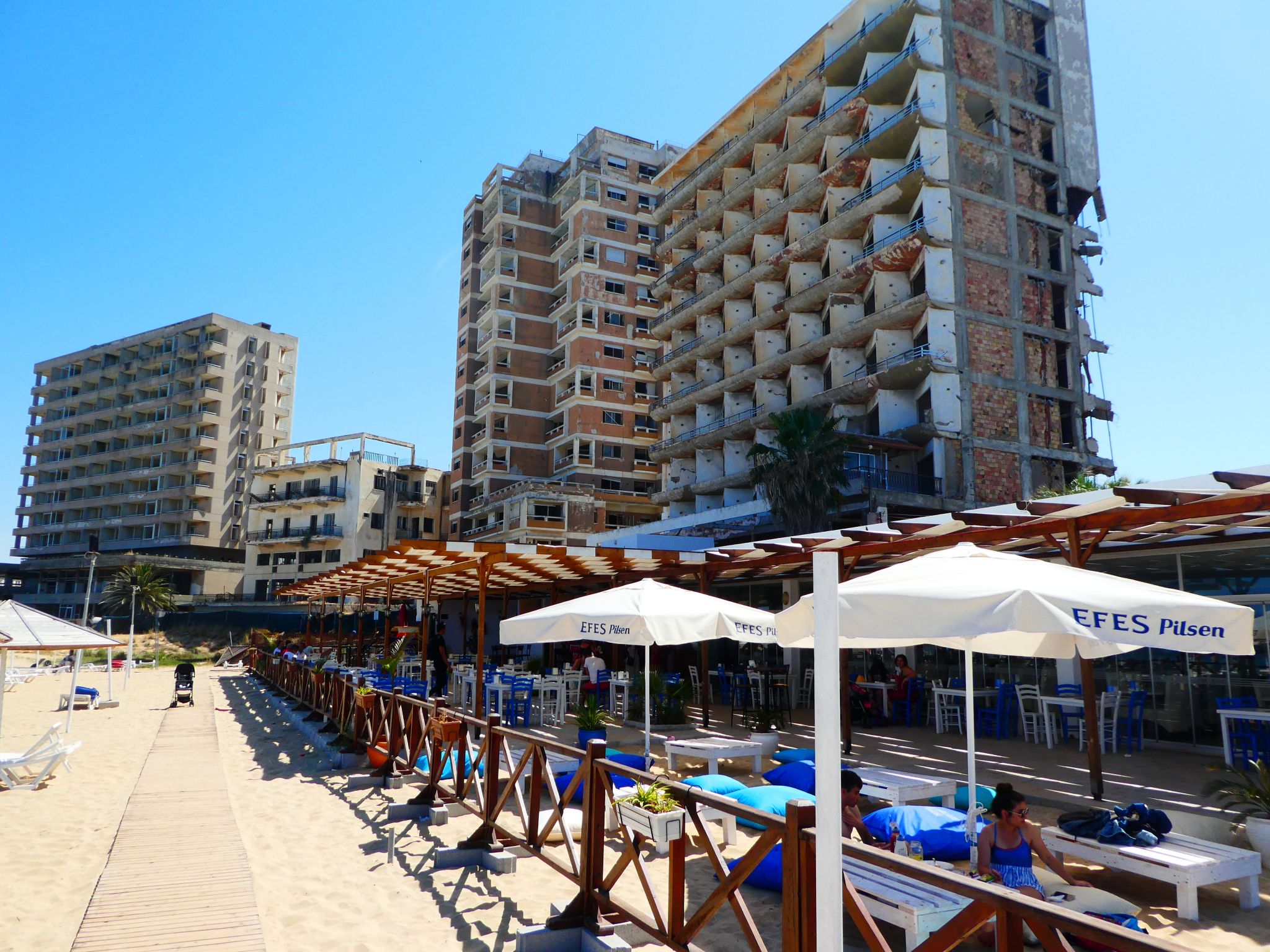 It would be tempting to characterise Cyprus as Greece-lite and Turkey-lite, but that would be simplistic.  It is a country with its own rich history and unique identity.  And, incidentally, THE best pork chops!  Sorry, Greece.