From Kas we headed to Istanbul for a few days, revisiting the hamam and tucking into some classic Turkish cuisine, then hopped on the night train which ever so slowly trundles its way to Sofia, Bulgaria.  Taking 10 hours to travel just 571km, this is no Japanese bullet train.

In his travel classic, Neither Here, Nor There, Bill Bryson described his experience of taking this train journey in the opposite direction:

“We had a compartment to ourselves as we left Sofia, but about two stops later the door slid brusquely open and an extended family of noisy fat people, looking like a living testimonial to the inadvisability of chronic inbreeding, barged in laden with cardboard suitcases and string bags of evil smelling food.  They … immediately began delving in the food bags, passing around handkerchiefs full of little dead fish, hunks of dry bread, runny boiled eggs and dripping slabs of pungent curdled cheese whose smell put me in mind of the time my family returned from summer vacation to discover that my mother had inadvertently locked the cat in the broom cupboard for the three hottest weeks of the year”.

Alas, our journey was not so memorable.  There’s nothing like a double sleeper compartment to insulate you from fellow travellers.  Although it still felt like a return to the days of the Iron Curtain when we had to de-board at 1am at a rail siding in the middle of nowhere to go through border control procedures.

Sofia was extensively bombed during WWII and much of its historic architecture was lost.  What survived tends to be in pockets with more modern buildings around.

The tiny St George Rotunda, built in the 4th century, is Sofia’s oldest preserved building.  It’s still a working church, hemmed in on three sides by a u-shaped Sheraton Hotel. 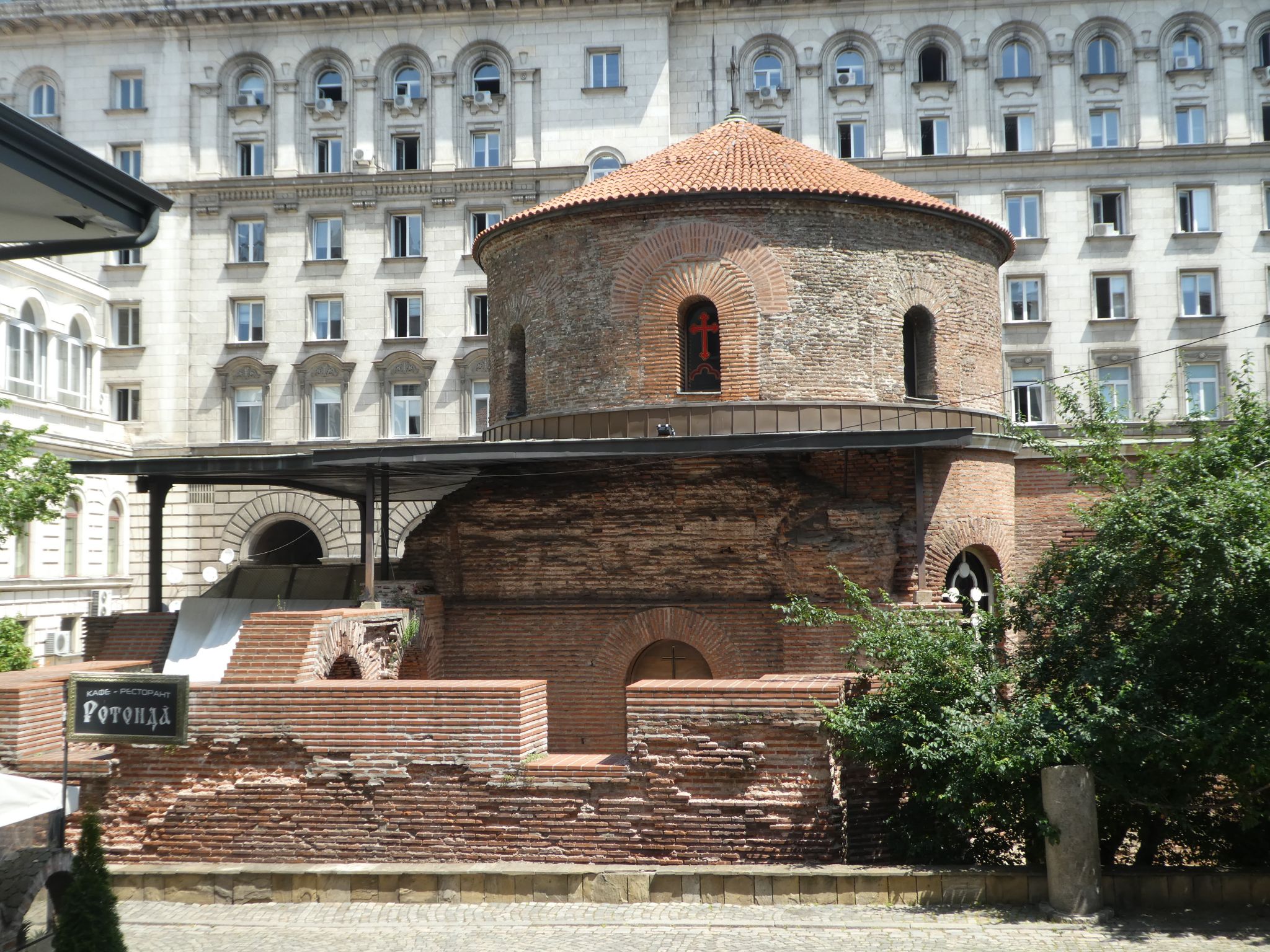 At the opposite end of the scale, the Cathedral of St Alexander Nevski is the largest Orthodox Church in the Balkans.  It was built in 1882 to honour the 200,000 Russians who died in the 1877/78 Russo-Turkish War which led to Bulgaria’s independence from the Ottoman Empire. 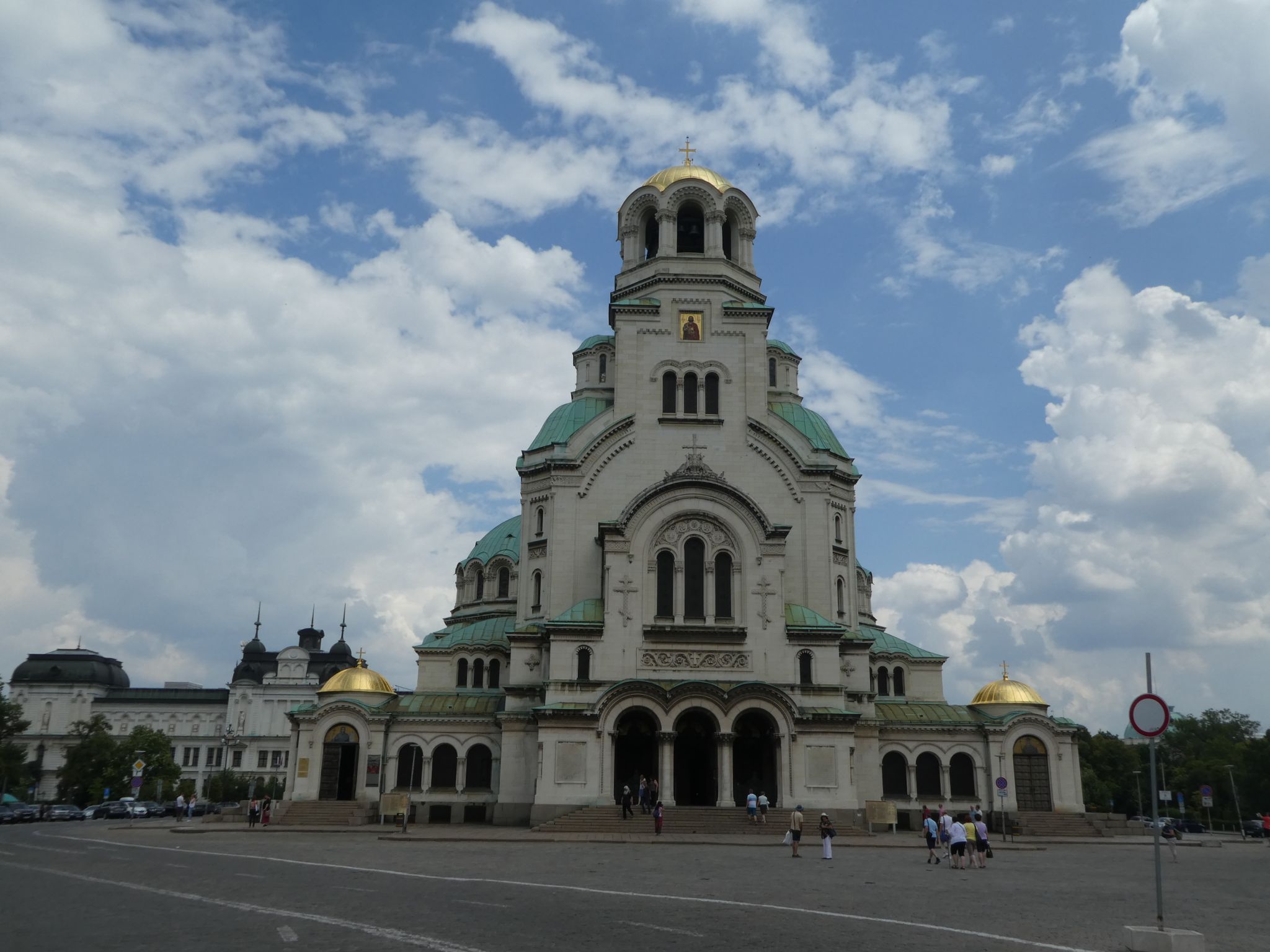 Built in 1576, Banya Bashi Mosque is Sofia’s only working mosque.  Across the road, the remains of the Roman city, Serdika, were uncovered from 2010 to 2012 during construction of the metro.  The excavated foundations of eight streets, houses, baths and a church are now within an open air museum next to the metro entrance. 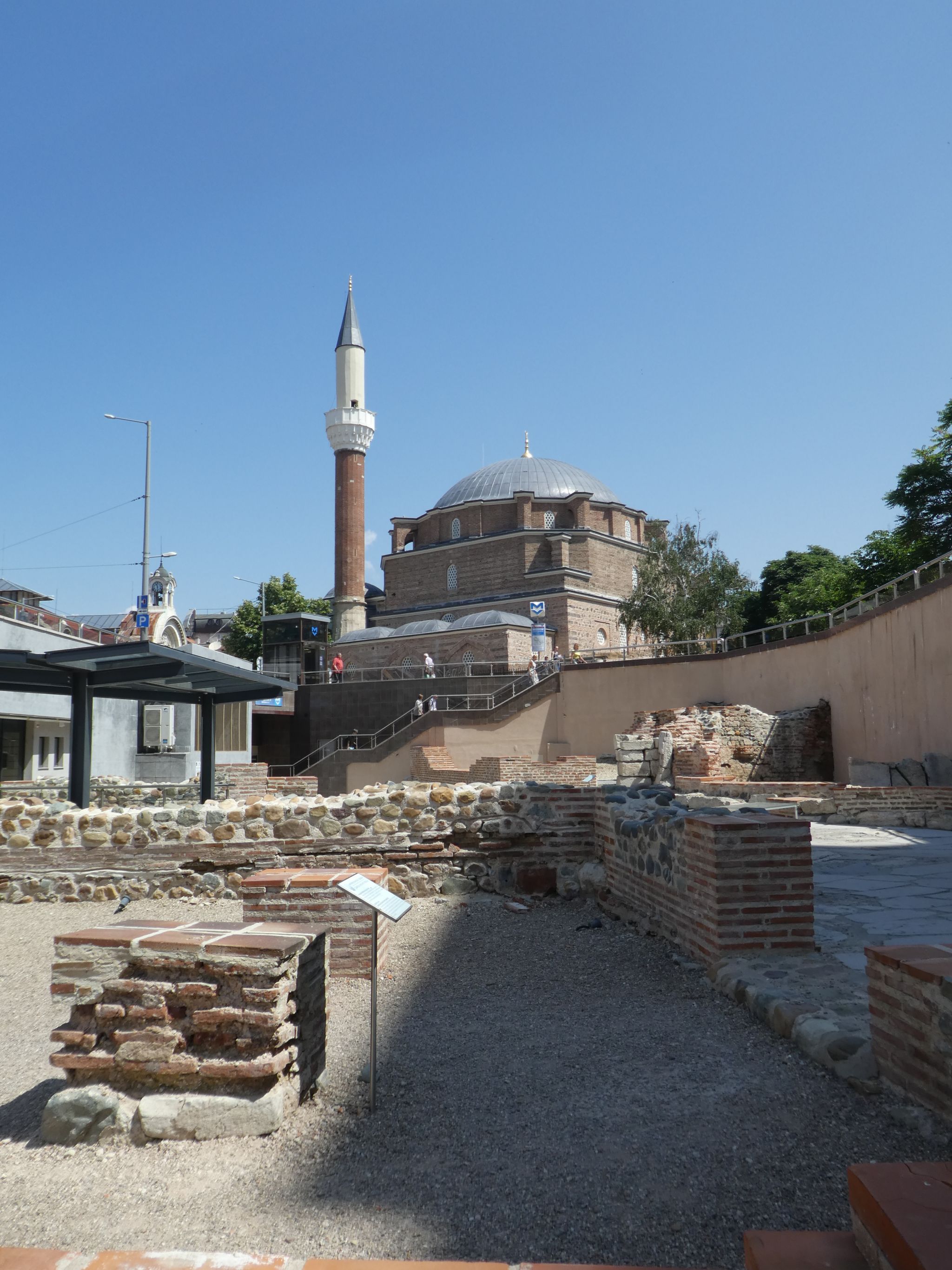 Nearby, locals fill bottles with water from fountains previously attached to the Mineral Baths and mosque.  The water is from a natural underground spring.  It’s warm and tastes very strongly of minerals (yuck!) but many believe it has medicinal qualities.  There is a saying that the water will cure ‘everything but a broken heart’. 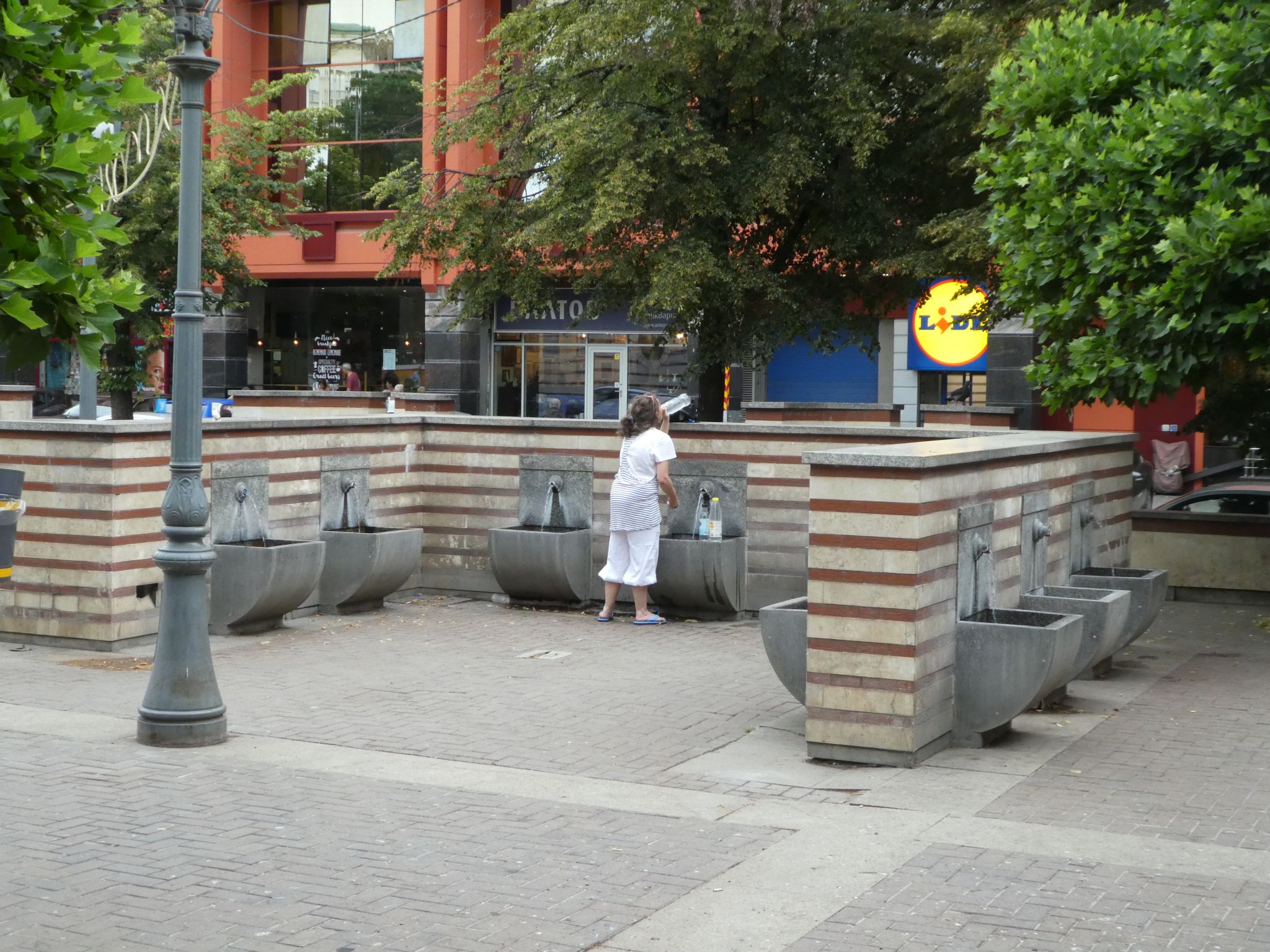 And just a couple of blocks away, Sofia’s synagogue, built in 1909 in a style called Bulgarian National Romanticism, is the second-largest Sephardic synagogue in Europe.  It’s 2,250kg chandelier is Bulgaria’s biggest. 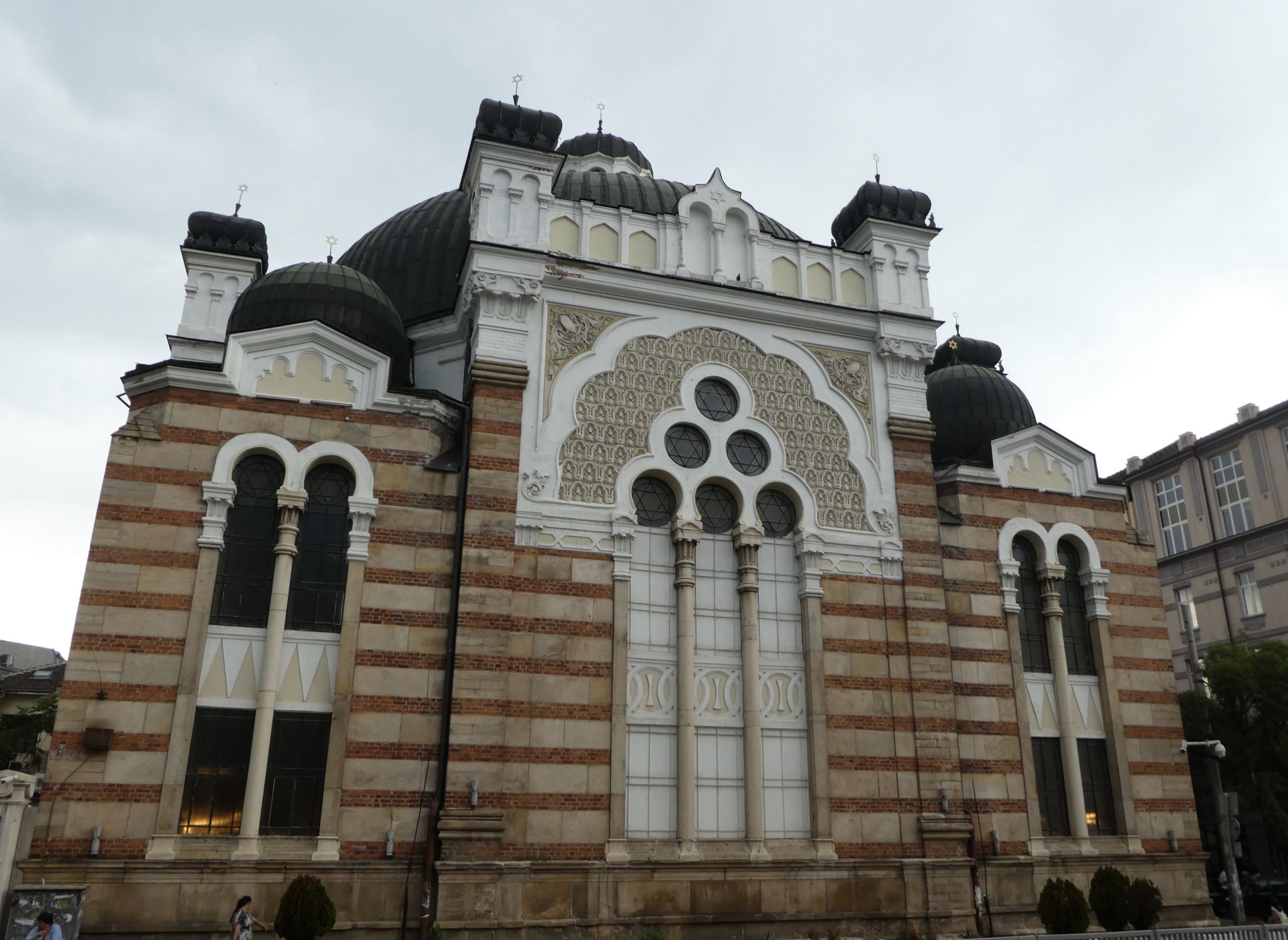 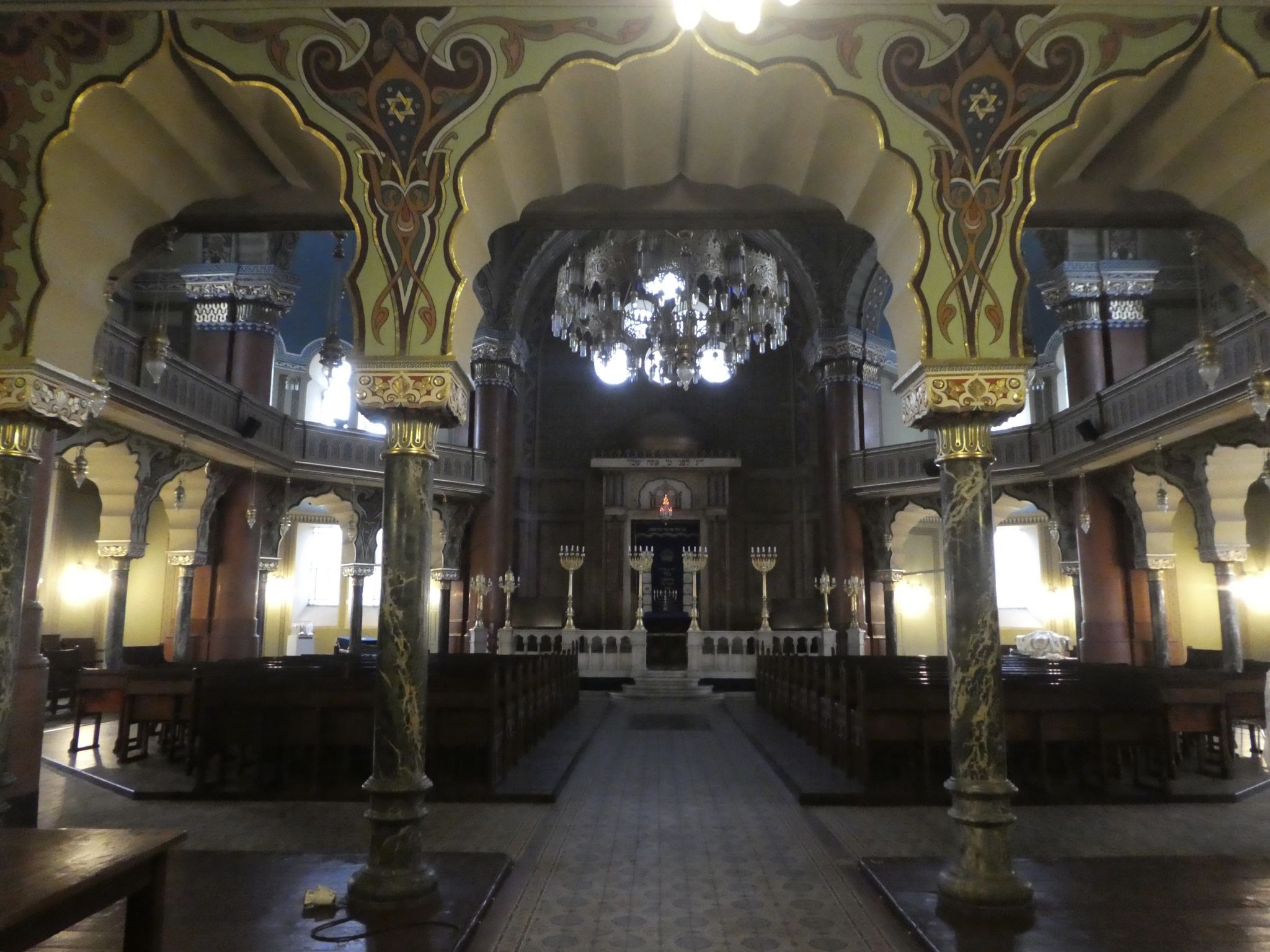 Outside the President’s Building, the Bulgarian guards don’t have bearskin hats like the Brits or wacky pom-pom shoes like the Greeks, but the changing of the guard is still a bit theatrical and like all such ceremonies, ever so faintly absurd. 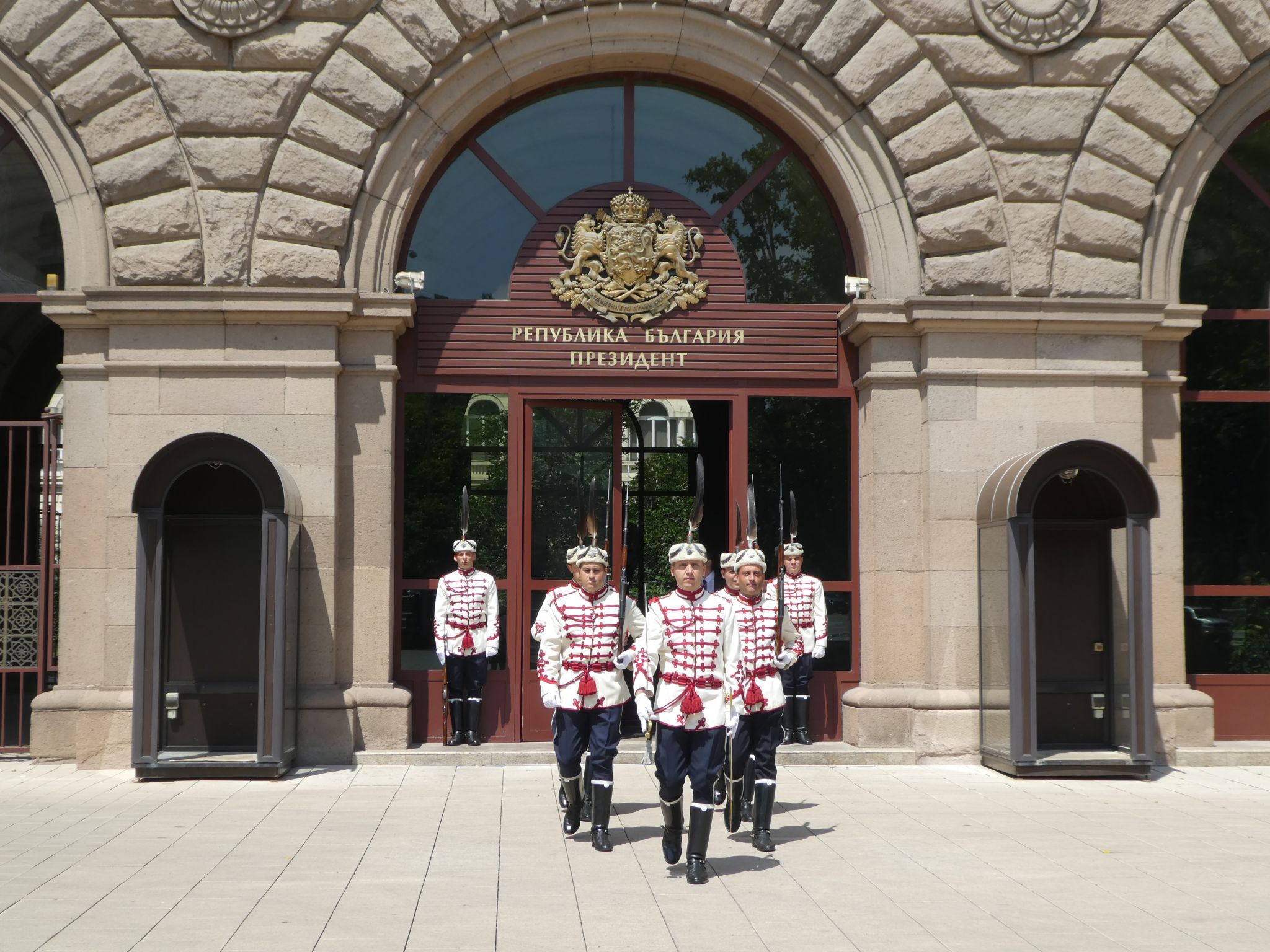 Post-WWII reconstruction in Sofia by socialist architects means a city centre full of imposing socialist-realist edifices, the best example of which is the former Communist Party House.  In 1990, Bulgarians attempted to torch this symbol of the old regime, but it survived and is now home to the country’s National Assembly. 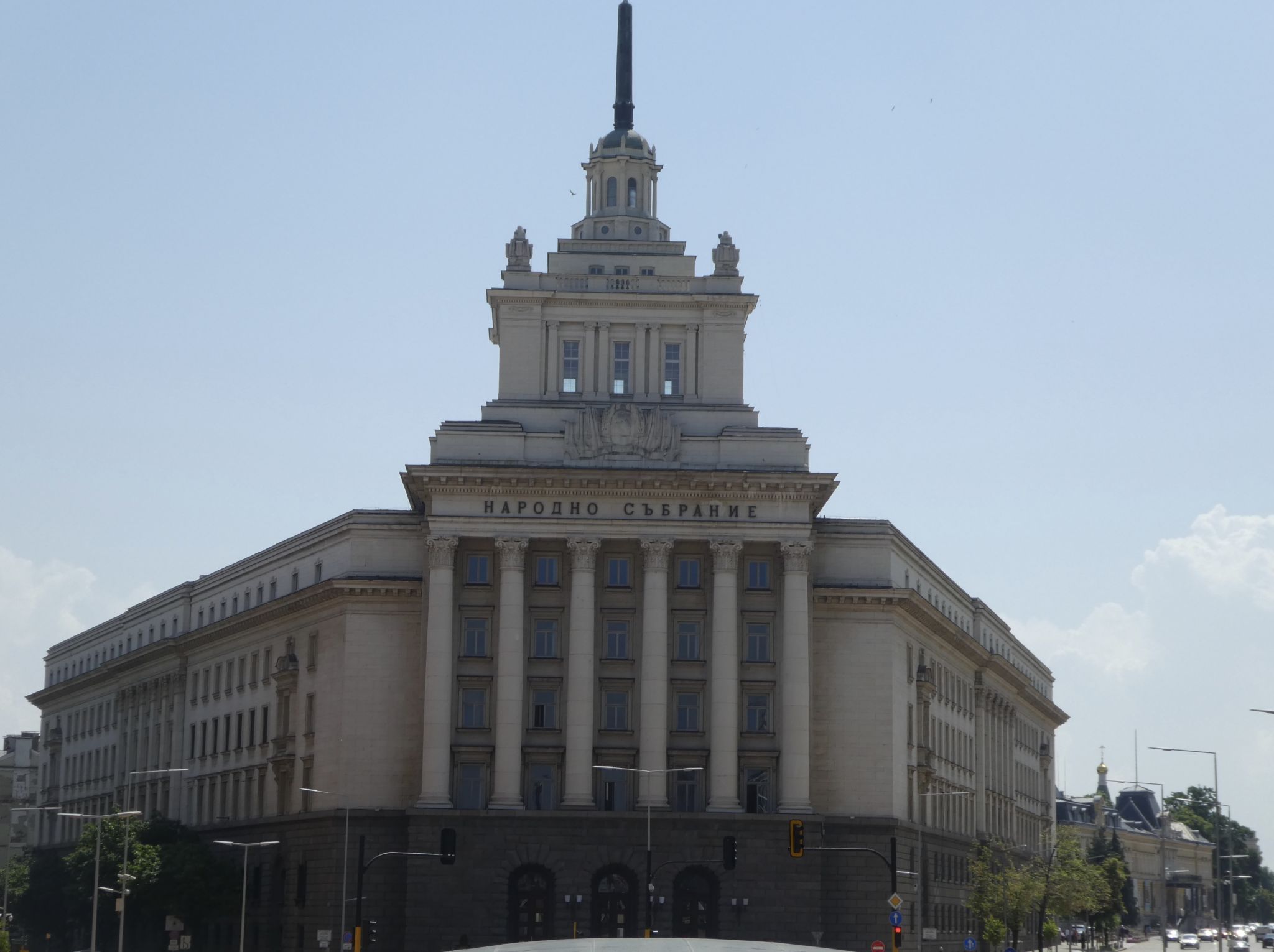 A massive statue of Lenin which faced the building from across the plaza was not so lucky.  It was torn down in 1991 and the site remained vacant until 2001 when a 24 metre high statue of Sofia, namesake and symbol of the city, was erected. 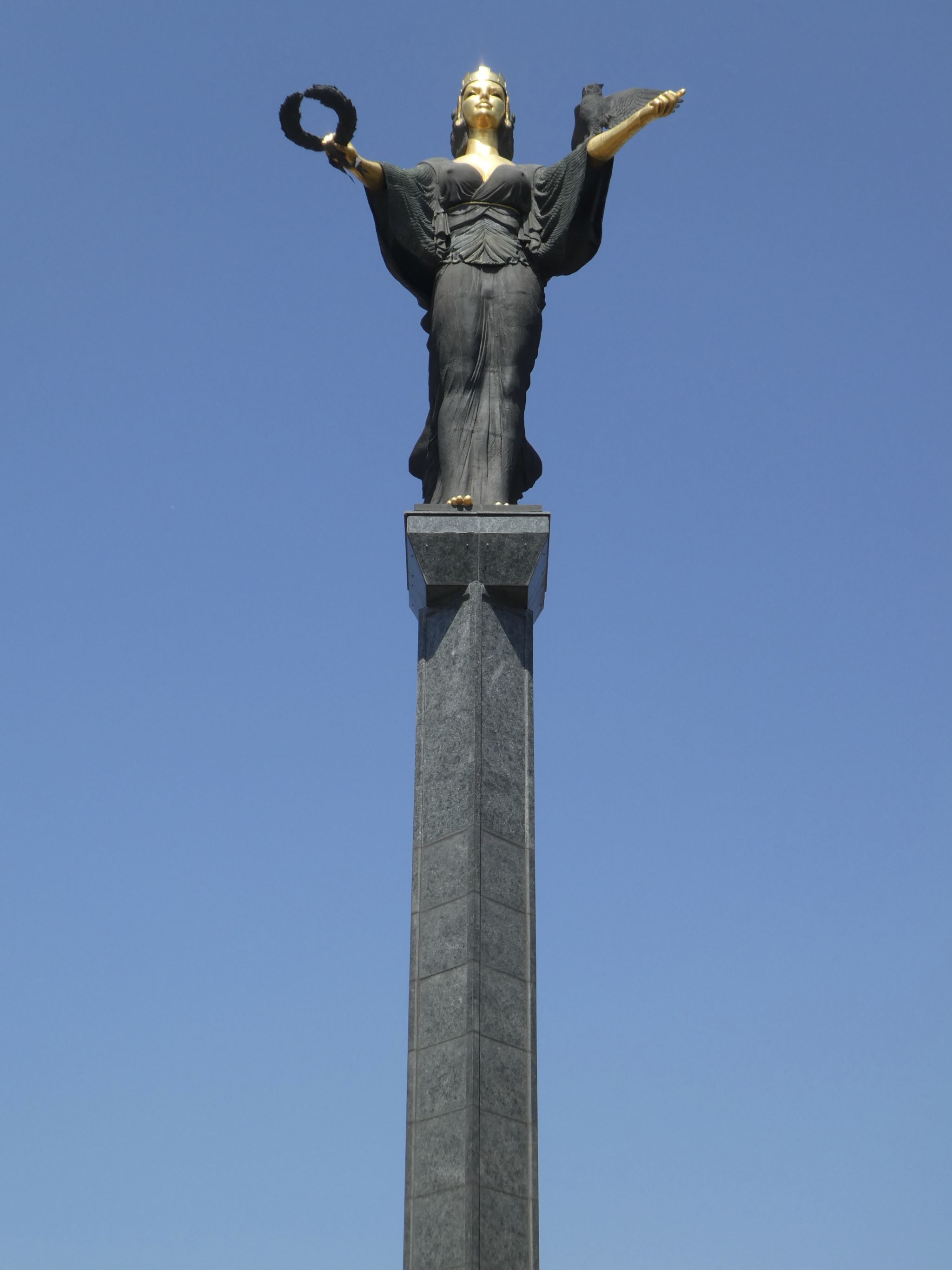 In many former communist states, Soviet-era statues were destroyed or dumped in wasteland in the frenzy that accompanied the fall of the Iron Curtain.  In Sofia, on the other hand, over 70 monumental statues have been preserved and curated into an open air exhibition in the grounds of the Museum of Socialist Art.  It’s a low-key museum hidden away in the grounds of a Ministry of Culture building out in the suburbs.  All the big names are there. 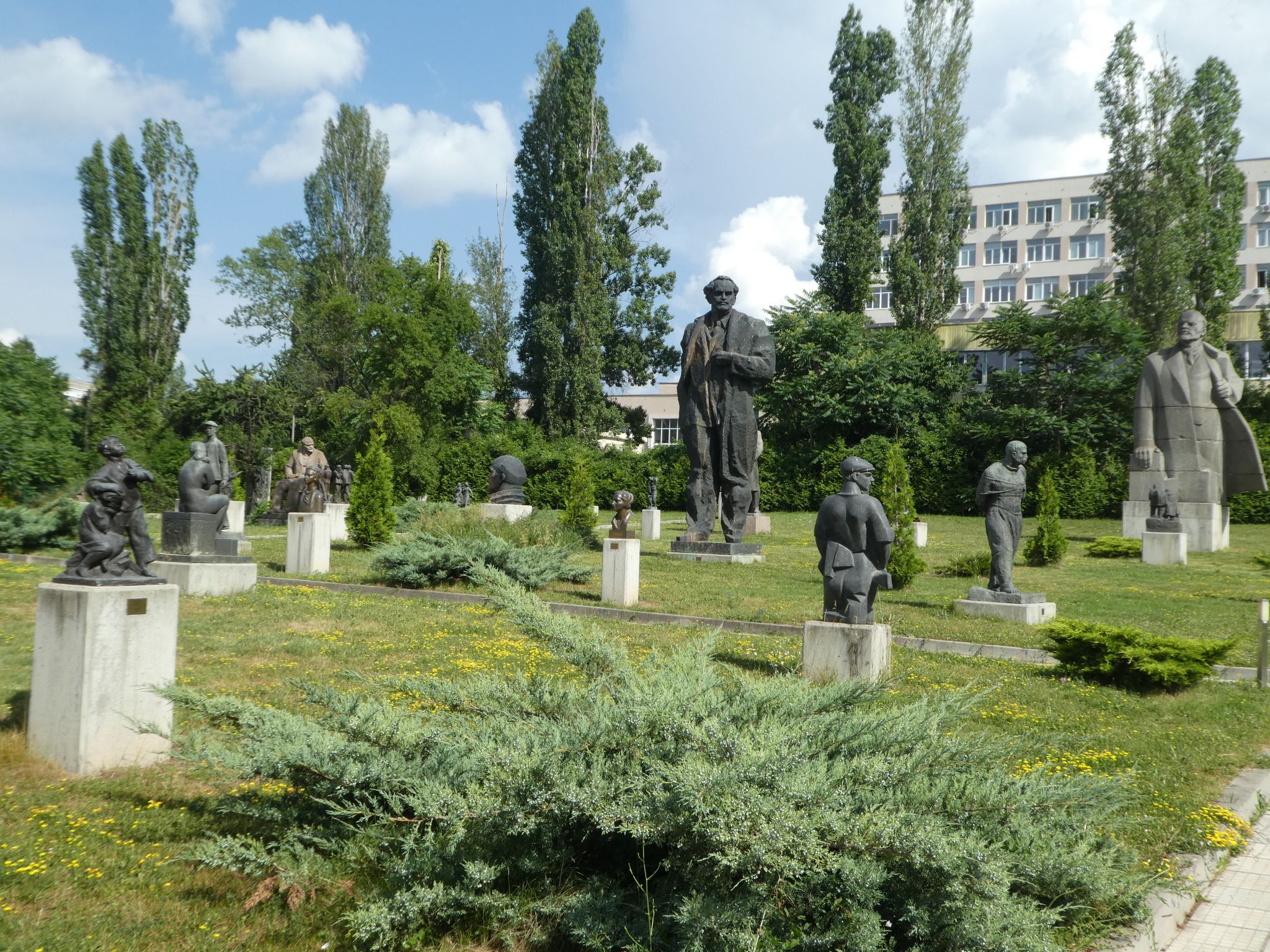 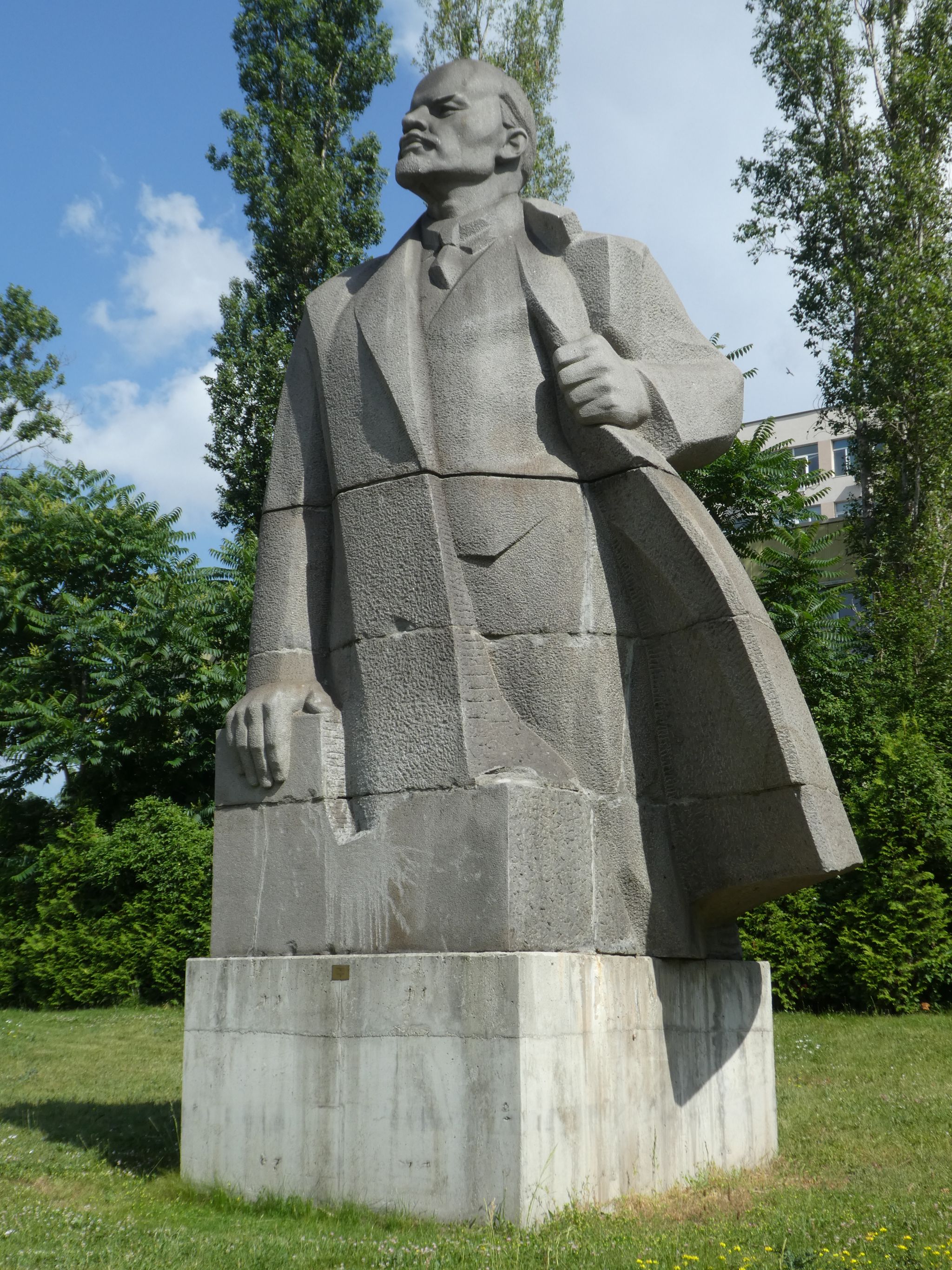 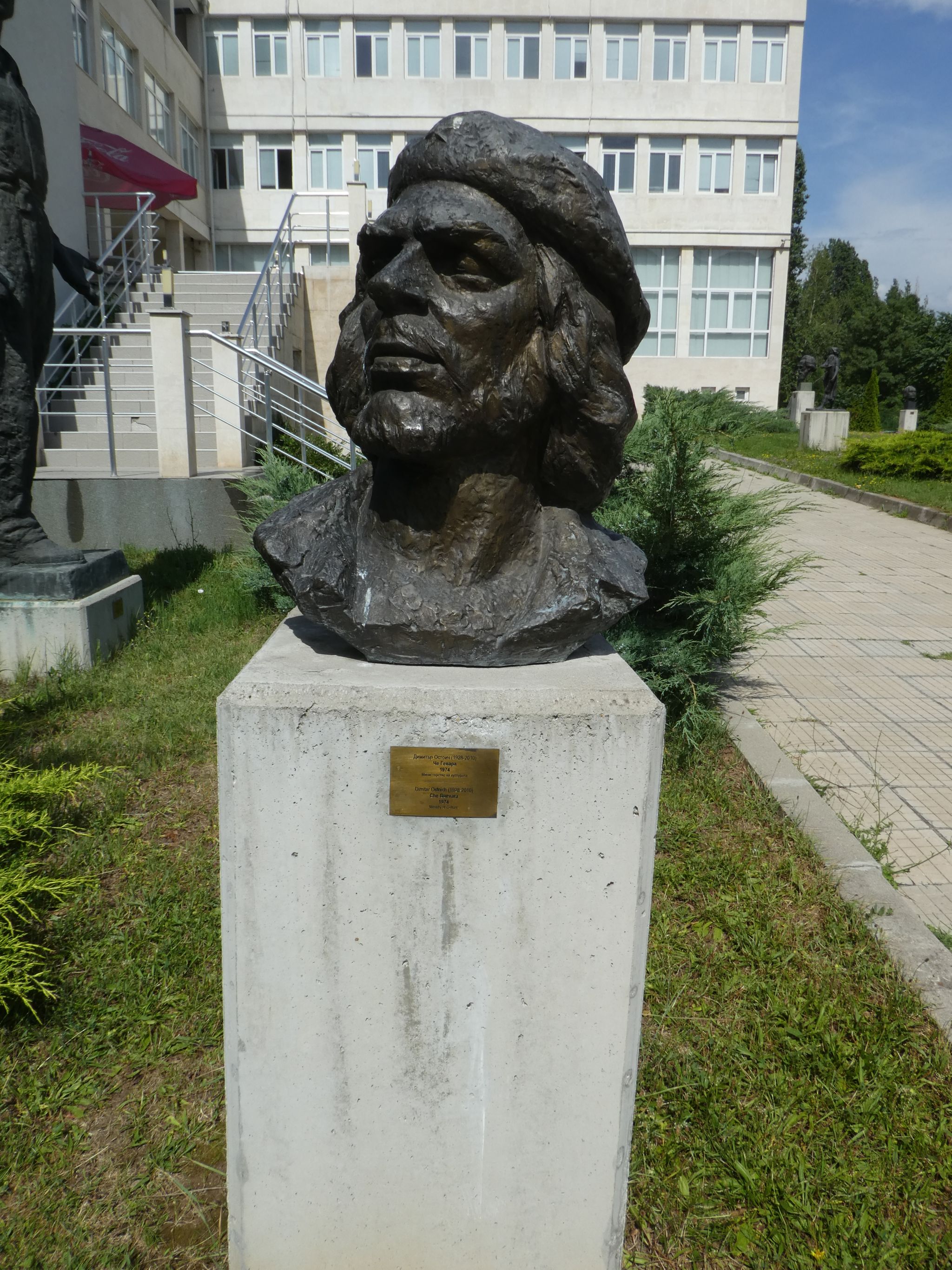 Bulgaria was the only country to democratically elect a communist government following the fall of the USSR, and it seems Lenin may still have at least one remaining fan here. 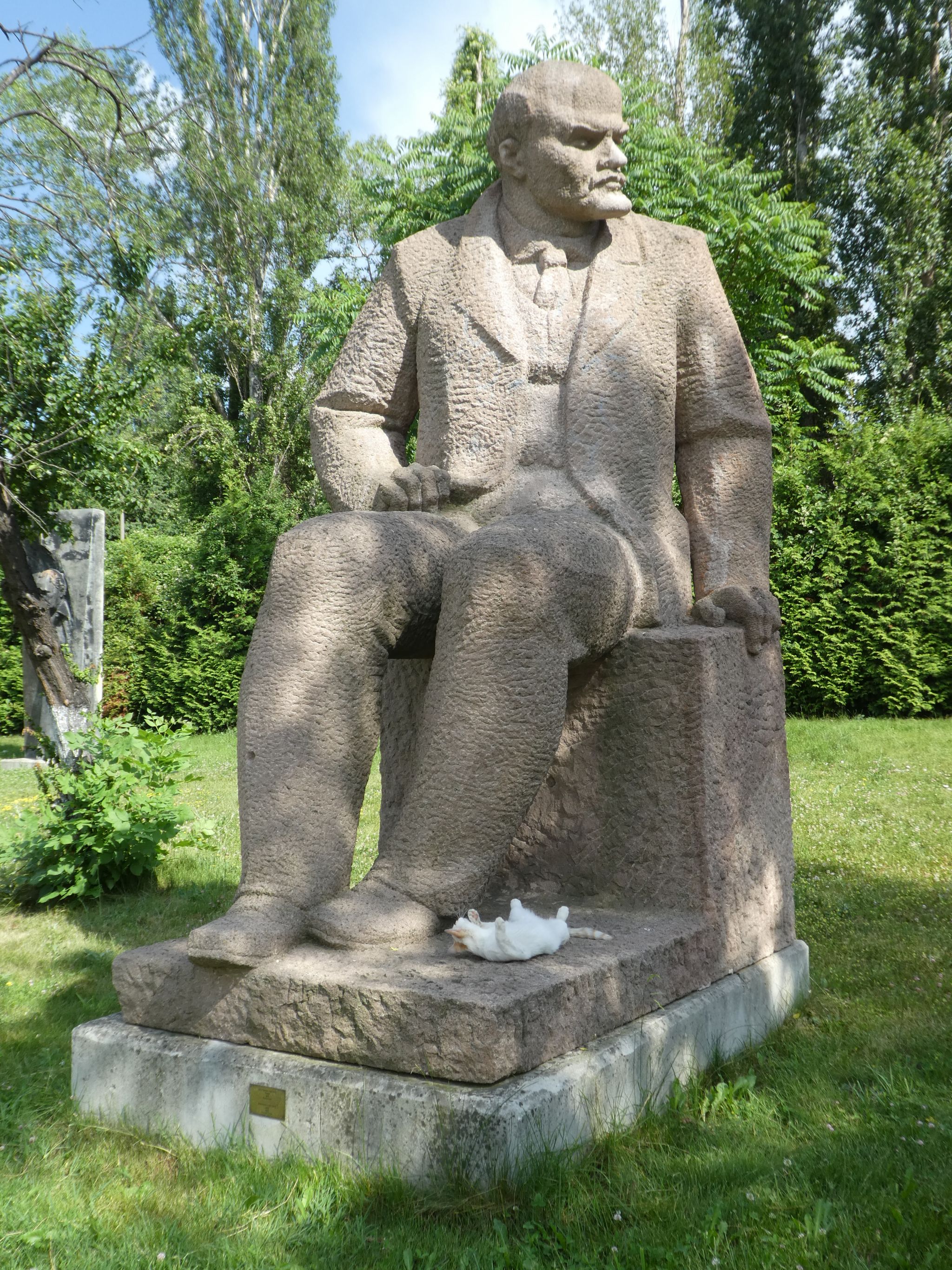 As well as the famous people, we loved the statues depicting stereotypes of communist perfection and achievement.  This chap was probably supposed to be the archetypal worker marching determinedly into the rosy socialist future, but to us he looked like he was trying out for the Bulgarian cricket team. 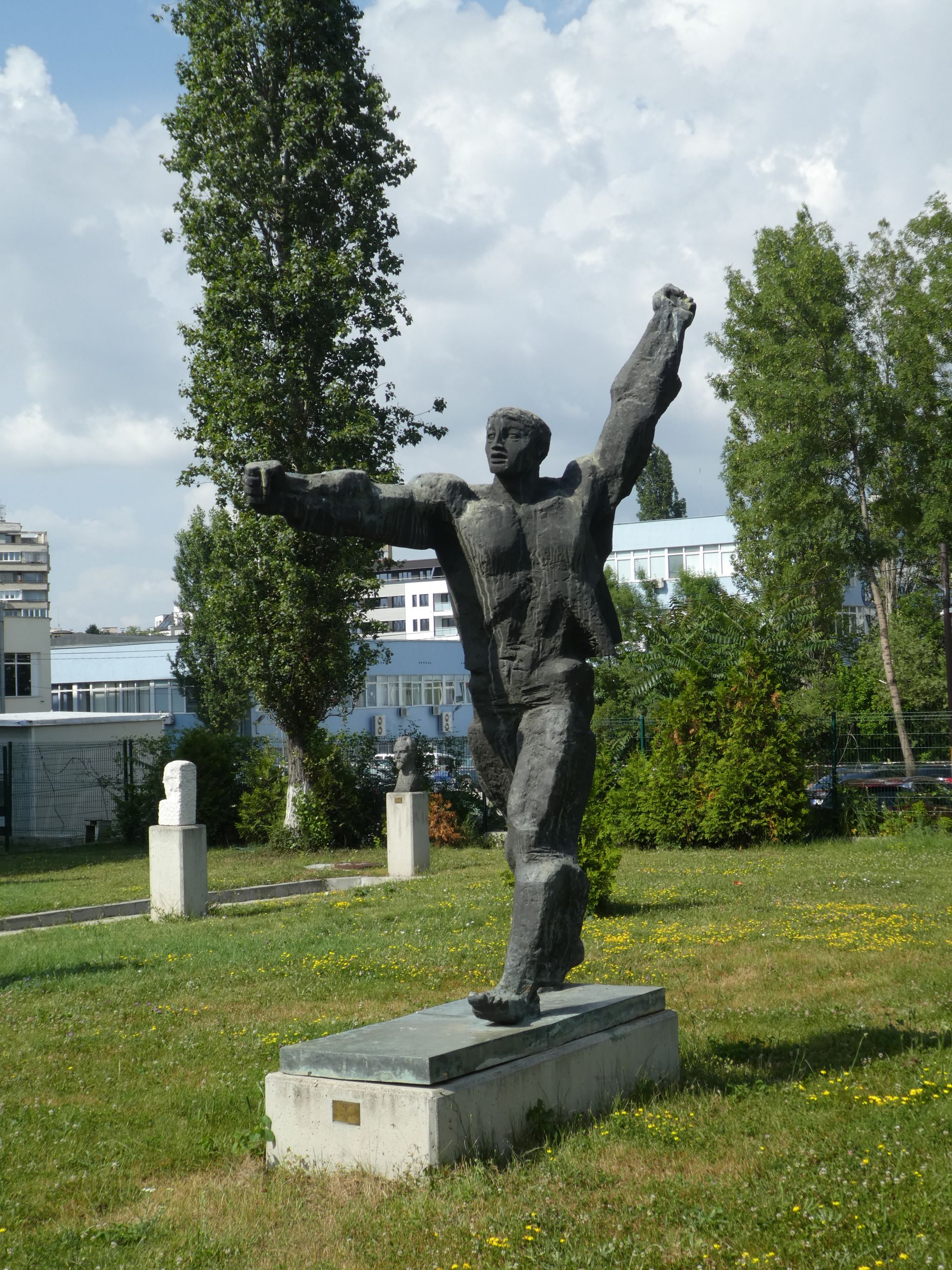 There’s also a video room where you can watch old propaganda films from the 60s and 70s.  The overblown rhetoric, anti-West hysteria and gushing praise of Russia are so over the top they are funny, until you think about the damage done to the country by the ideology.

The big red star which used to be at the top of the pole on the roof of Communist Party House, removed after the arson attempt discussed above, is also here. 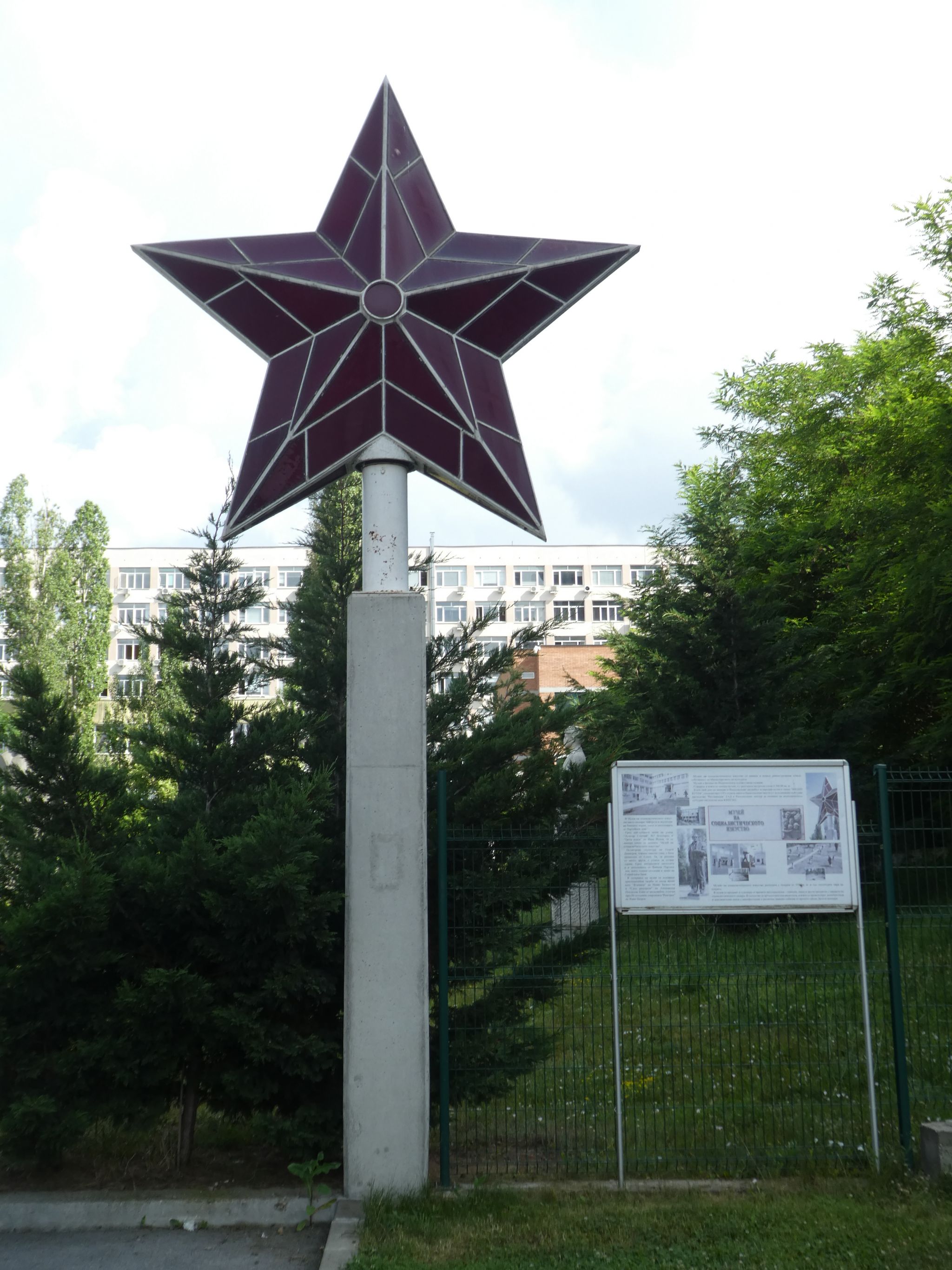 Maybe some statues were too heavy, or not controversial enough, to be removed from public sight, because there’s still quite a few in the many parks around central Sofia.  Beach volleyball, anyone? 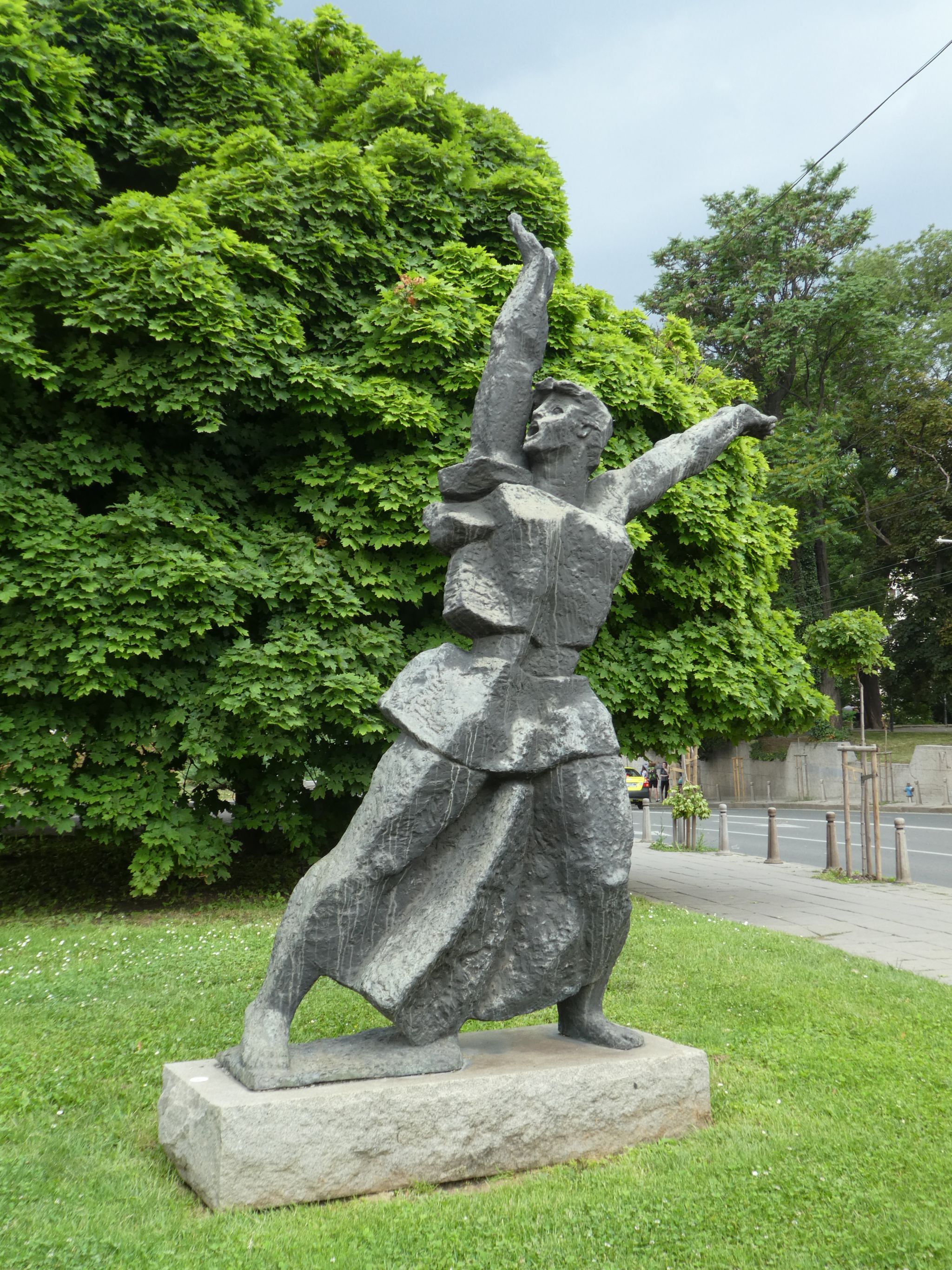 For everything you didn’t know you needed to know about the history of Bulgarian warfare, you can visit the National Museum of Military History.  The collection of tanks, planes and other military hardware is enormous, with over 40,000 square metres of outdoor displays.  There’s even nuclear-capable ballistic missiles, but most interesting and anomalous, sitting proudly in the middle of hundreds of millions of dollars of decommissioned lethality, is …. a Trabant.

Dubbed ‘a spark plug with a roof’, almost 3.1 million of these tiny cars with a two-stroke engine and a body made of a plastic formed from recycled cotton were made in East Germany in the communist era.  Universally derided for their poor performance and build quality, they became a symbol of the failure of the eastern bloc – and really one has to wonder how it is that these countries could master nuclear weapons technology but could not work out how to build a decent car.

This particular Trabant was used to ‘abduct’ the visiting NATO Secretary General in 1991 in a stunt aimed at furthering Bulgaria’s ambitions to join NATO. 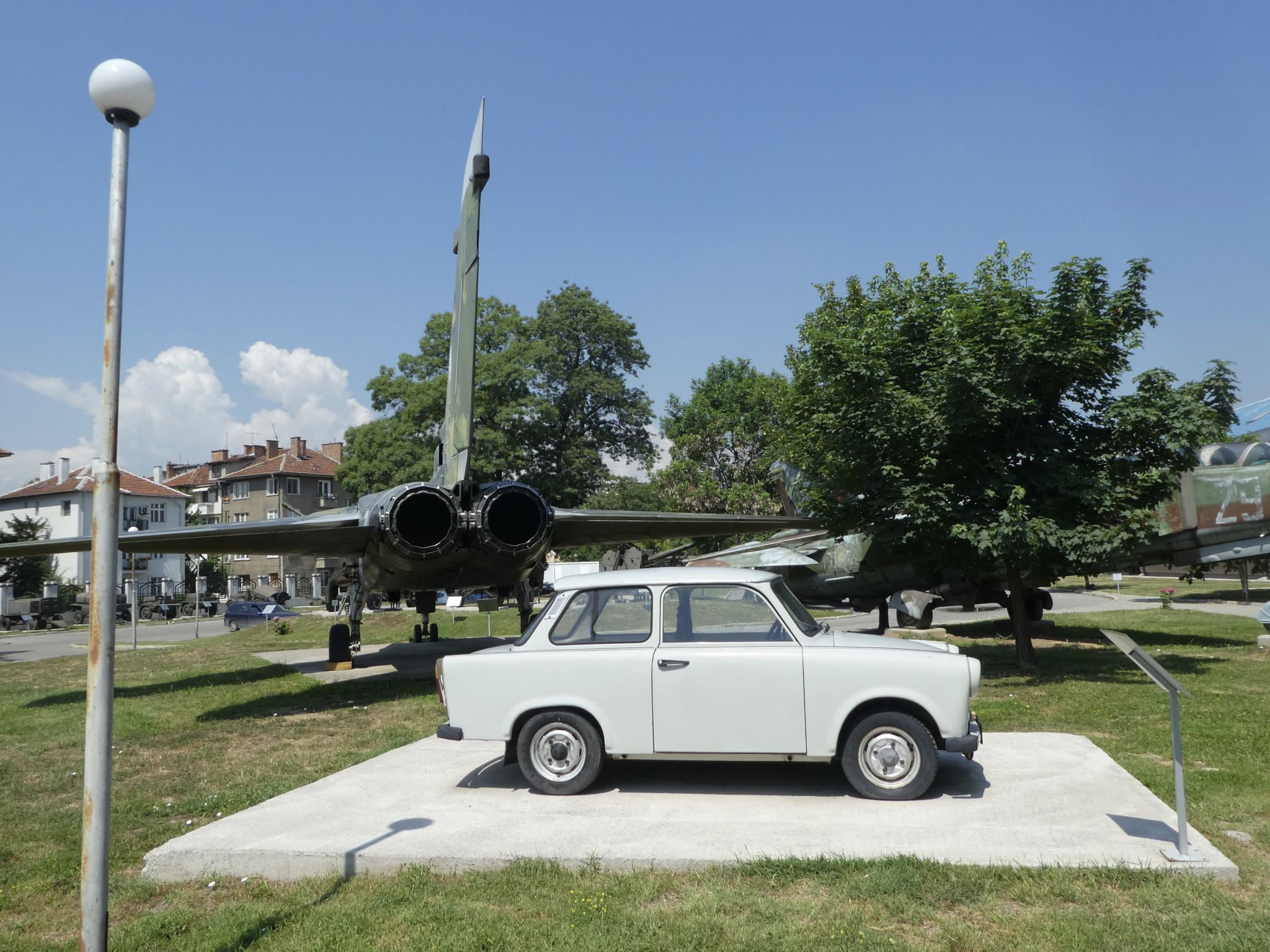 Visiting the National Military Museum was the quid pro quo for Julie’s insistence on a trip out of town to the Rila Monastery.  It is ‘Bulgaria’s most famous monastery’ (which invokes, of course, the challenge – name five famous Bulgarian monasteries) and is pictured on the 1 lev banknote.

It all started with Ivan Rilski.  After becoming a monk in his mid 20s, Rilski left the monastery and lived as a hermit in isolated caves in the Rila Mountains.  In what sounds like a storyline from Monty Python’s Life of Brian, when Rilski was in his 40s, news of miracles attributed to him brought a steady stream of devotees who set up camps around his cave, seeking blessings from him.  He didn’t want to see them.  They don’t seem to have understood that being a ‘hermit’ means living alone.

This 10th century Mexican standoff led to the construction of the monastery.  The devotees bunked down at the monastery.  A centre of spiritual learning was born.  Rilski remained in his cave for another 20 years until his death.  He was duly canonised and became St Ivan Rilski, patron saint of Bulgaria.

The monastery flourished, amassing great wealth via donations, including from successive tsars.  It has been destroyed and rebuilt several times, and the current church dates largely to the 1800s, although some structures in the compound date back to the 1400s.  It’s in great condition and the frescoes are exceptional. 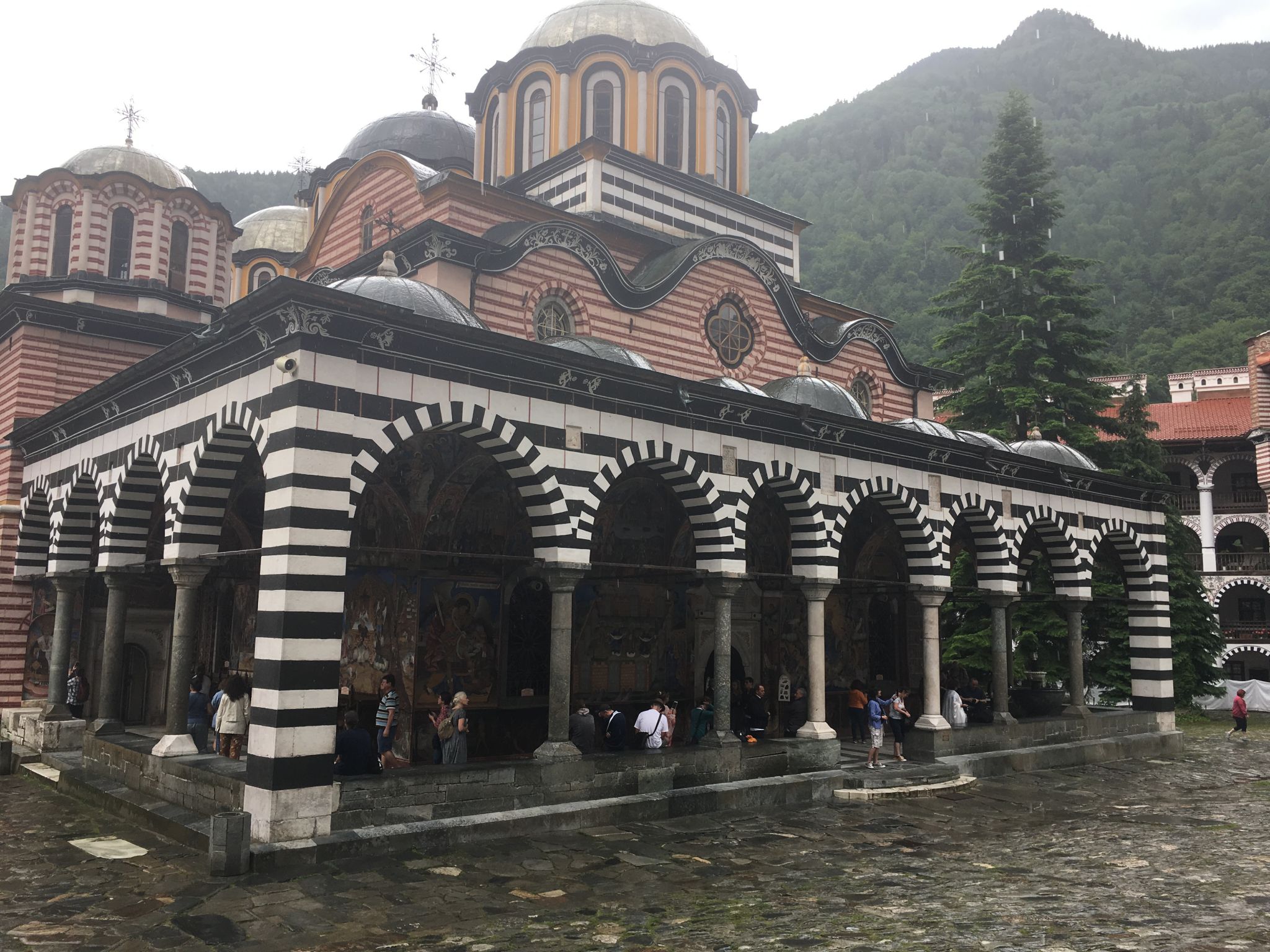 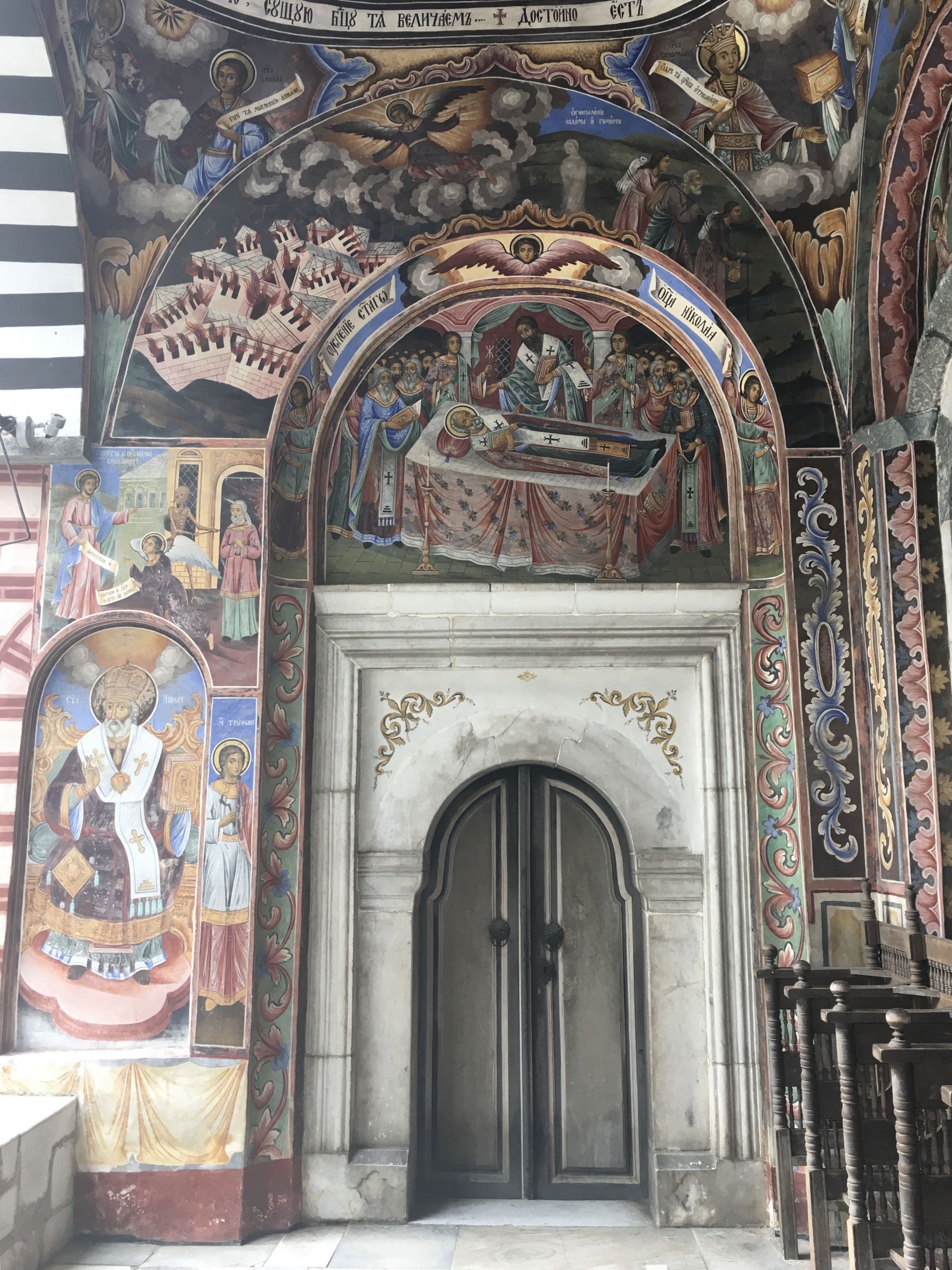 Inside the church is a chandelier adorned with decorated ostrich eggs and more fabulous frescoes, but no photos are allowed.

The monastery has living quarters for 300 monks (now just 60 in residence) and you can stay the night if you don’t mind sleeping in an unheated concrete room, with the gates locked at 7pm and lights out at 9pm.  Ah, those monks really know how to live! 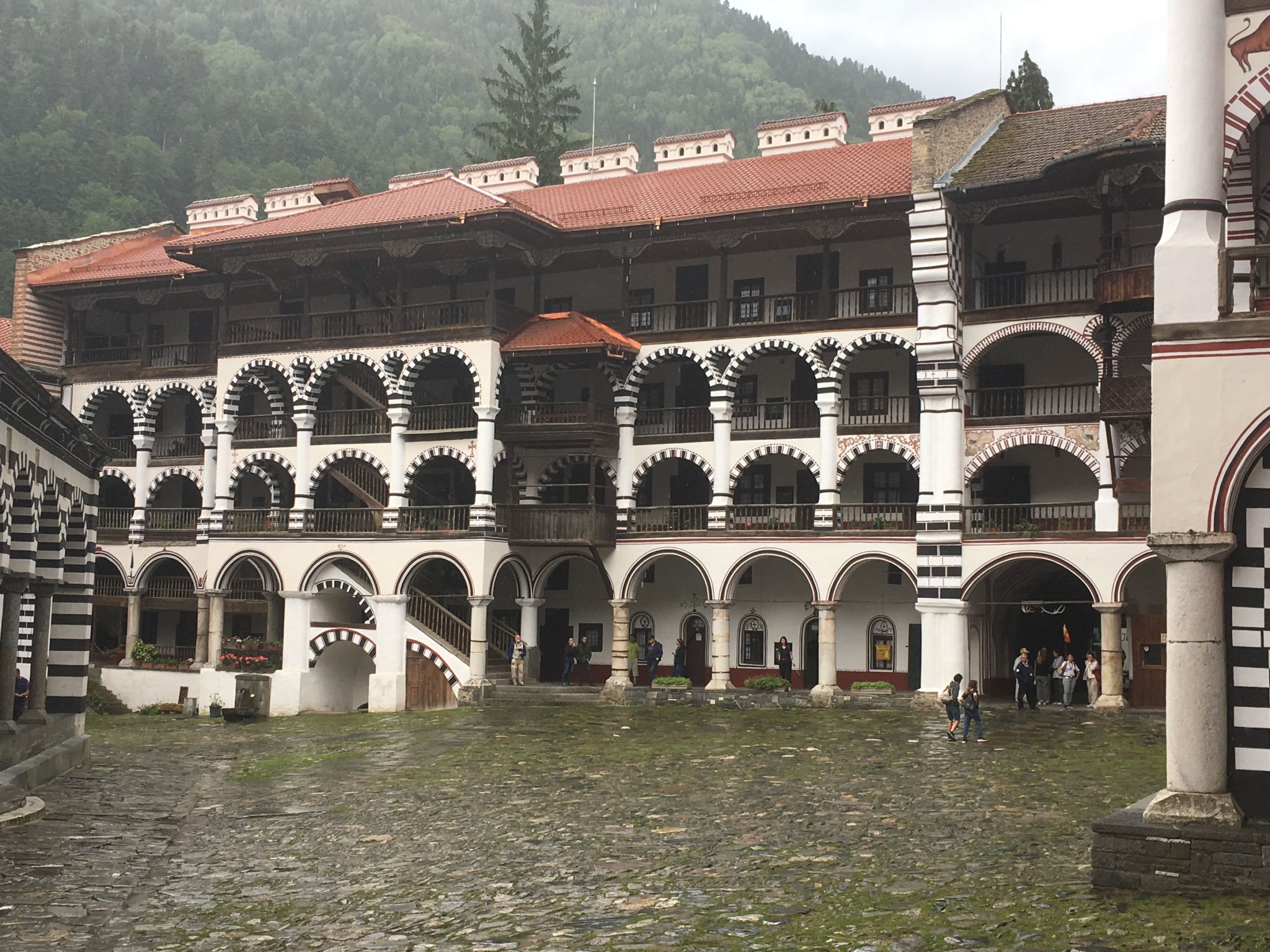 St Ivan’s remains were initially kept in Sofia, then in various other locations before finally being interred here in the church crypt in 1469.  These days the monastery includes two museums, an icon gallery and even has its own post office.  It attracts either 90,000 or  900,000 visitors per year, depending on your source of information.  Either way, it seems that even in death, St Ivan’s wish to be alone has been thwarted.